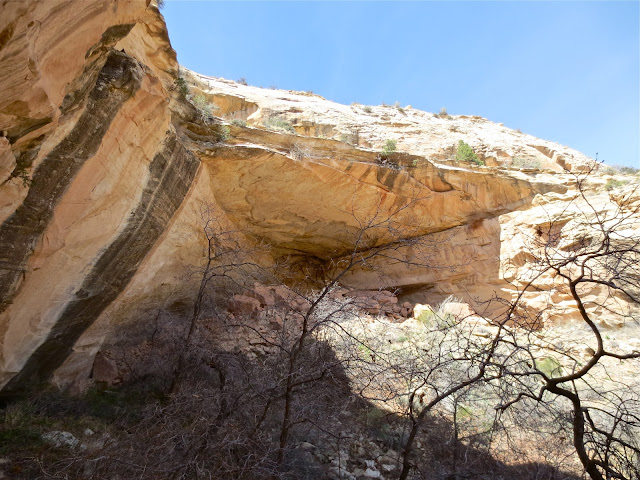 Today's Blog Title will be lost on the youngsters out there. I was just a sixteen year old wet behind the ears kid when Lou Christie's "Lightning Strikes" hit the charts in 1966. I was, and remain to this day, a fan of pure falsetto...and no one did it better than Frankie Valli and Lou Christie. The "Lightning" that keeps "Striking" is the good fortune of stumbling across quality ruins close to our Cedar Mesa boondock...outstanding enough to take my mind off Goldie's tranny, and whether we will make it home to Lovely Ouray.

Sometimes Gazetteers suck in a good way. Admittedly, ours is a bit dated, so it keeps misleading us from intended destinations (those little "Ruin Symbols"). In spite of this, we somehow end up "discovering" other ruins "serendipitously." Me thinks Ms Sara is monkeying around again. Man, I sure been missing that gal.

Our Utah Gazetteer shows that we can get to highway 95 from our backroad boondock if we just continue to follow our backroad west. That was yesterday's plan, to get on 95 and go to Mule Canyon for a look-see at the multiple ruin symbols shown over there. But our backroad dead ended on Combs Ridge just shy of the highway. Once again we just got out and hiked the Canyon de jour, hoping to find something.

And "something" we did find...several of them...one being the best ruin we've ever found, and rare its placement as cliff dwellings go. It was the last thing we found, while trying to escape the clutches heat and thirst. Sometimes attempting a "shortcut" can get you in deep doo doo. This one had a happy ending, tho, cutting a mile off our return trip, not to mention finding a "palace" of a cliff dwelling. Sara? Is that you? 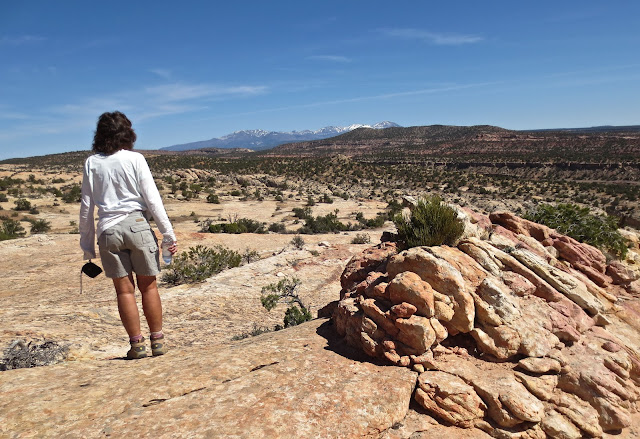 It didn't appear that there was a way to access De Jour canyon. We left the car in order to scout a route...leaving our backpacks, water and food in the car. You know how it goes...a little further...zig over there...zag...scramble...scoot and voila, your two miles from the car standing in a hot canyon. Oh well, just a quick look around...there's probably nothing here.

But over to the right, something catches the eye; we spot masonry in a shady cave. 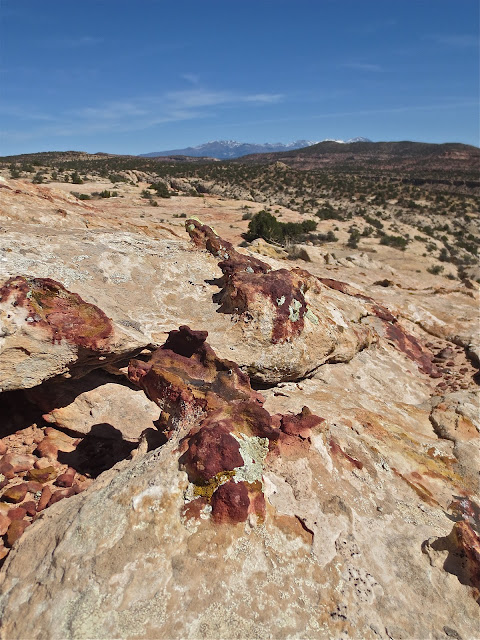 Zigging and Zagging around on white sandstone works up a powerful thirst. It can be a veritable tanning oven walking around on it. 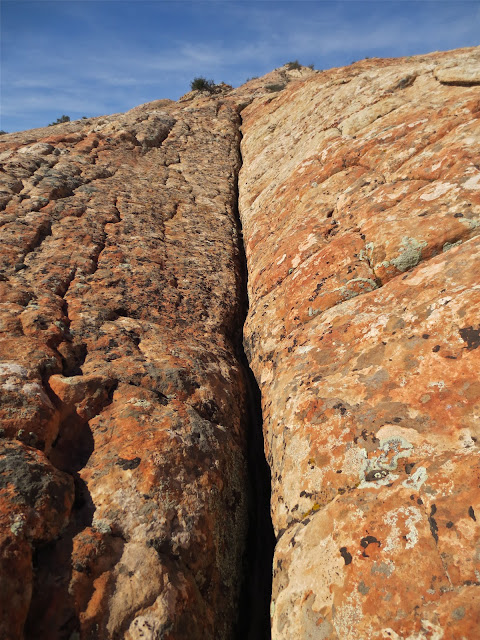 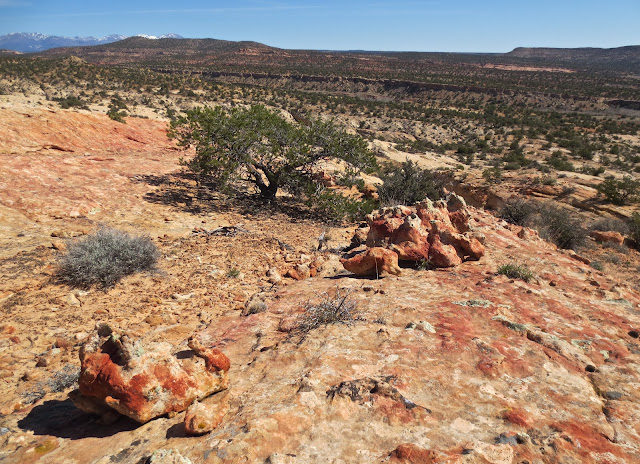 That's the canyon we were trying to access (above photo), crossing  some most colorful sandstone. 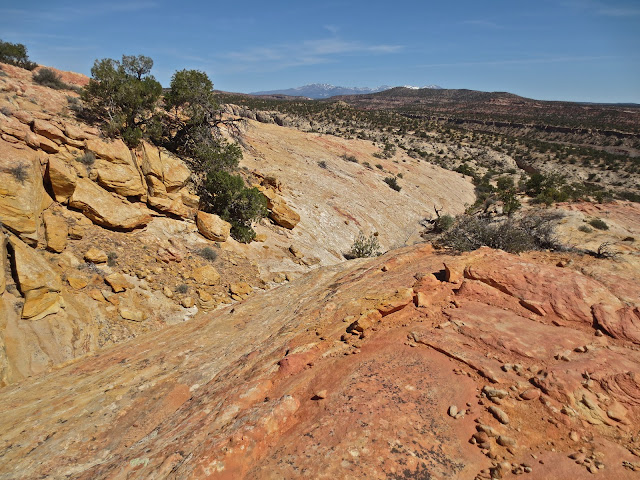 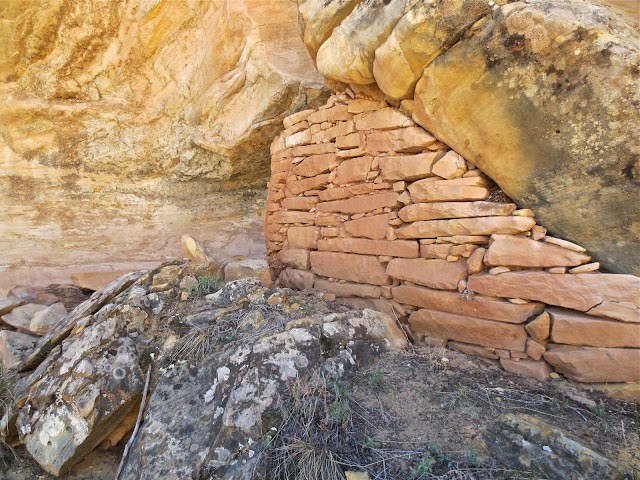 Ok, so it's not Mesa Verde, it's still pretty cool, and in great shape. This is a granary...where the Anasazi stored corn harvests. Packrats had pretty much taken it over. 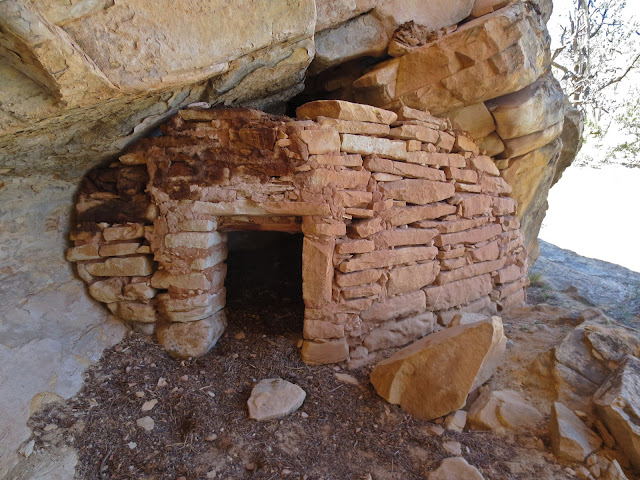 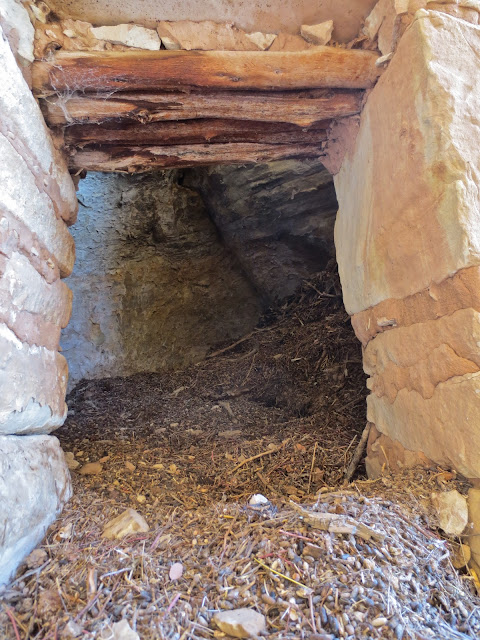 It's getting hotter, but spurred on by the granary find we decide to keep going. If there's a granary, there must be dwellings nearby. Up canyon we go... no water, no food...seduced by the prospect of discovery. Sure enough, up another side canyon, we find cliff dwellings and ruins. 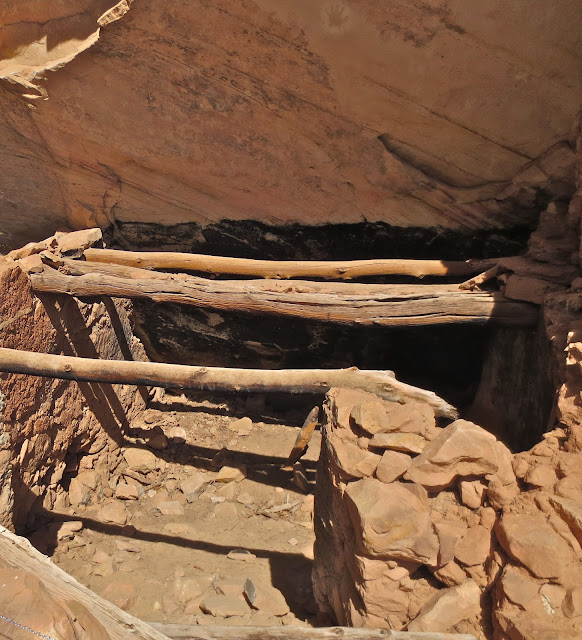 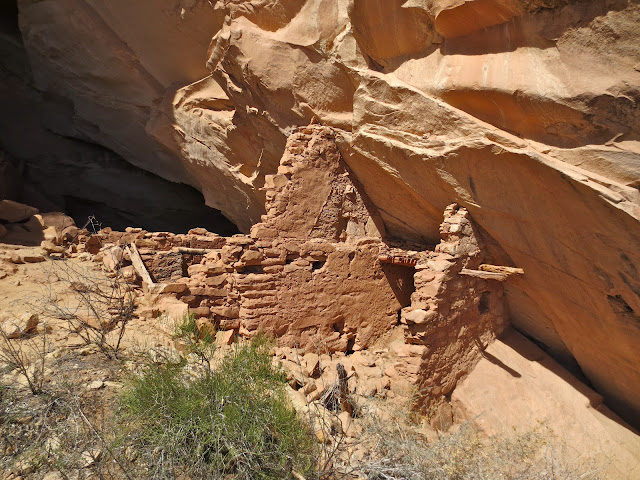 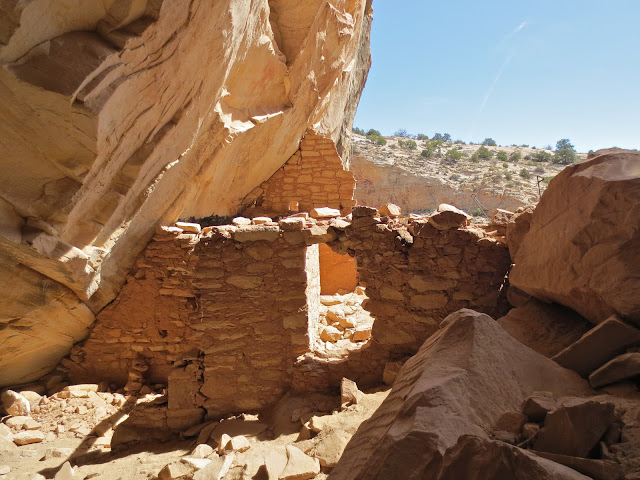 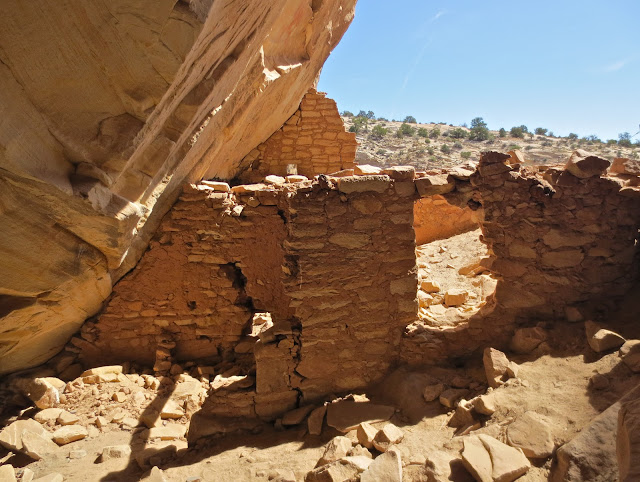 This particular ruin had deep caves toward the back...nice and cool. It must have been a "summer home" because it didn't face enough to the south. 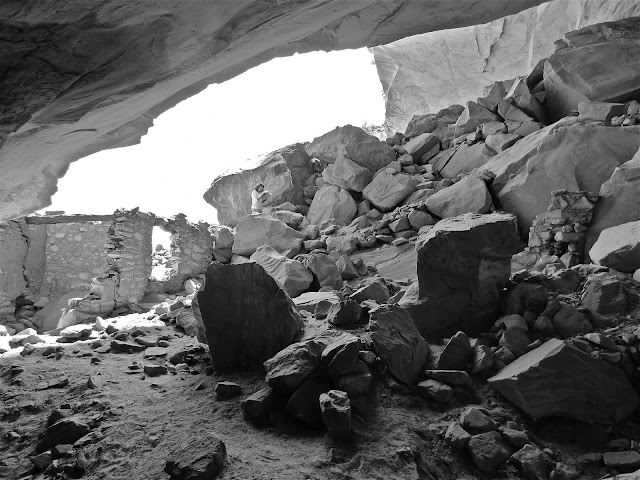 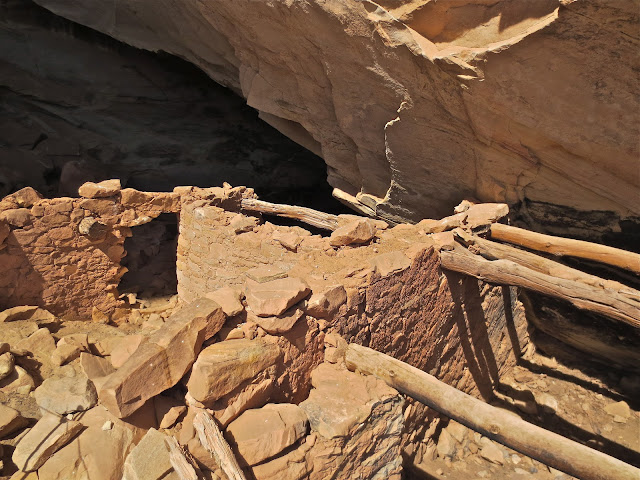 In spite of partial exposure, the vegas were in good shape. Cedar is one of the most durable woods that can be found in the southwest, a great and strong construction beam. 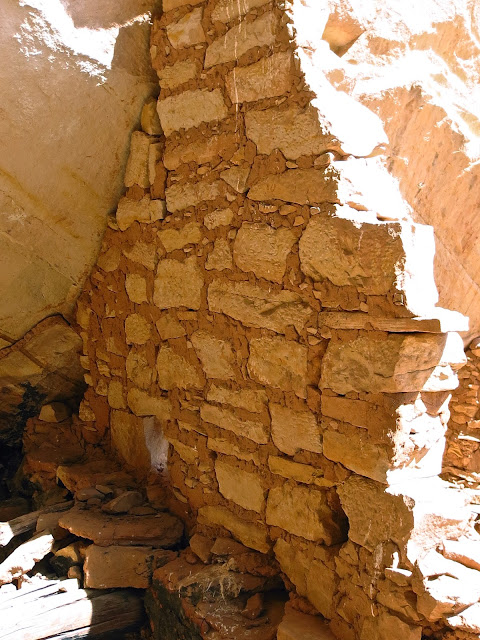 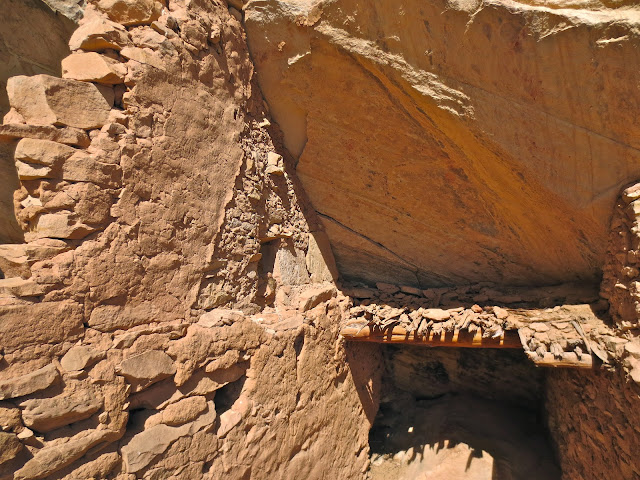 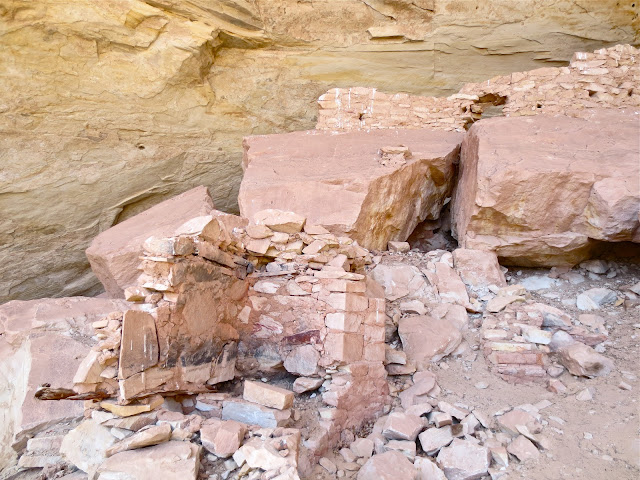 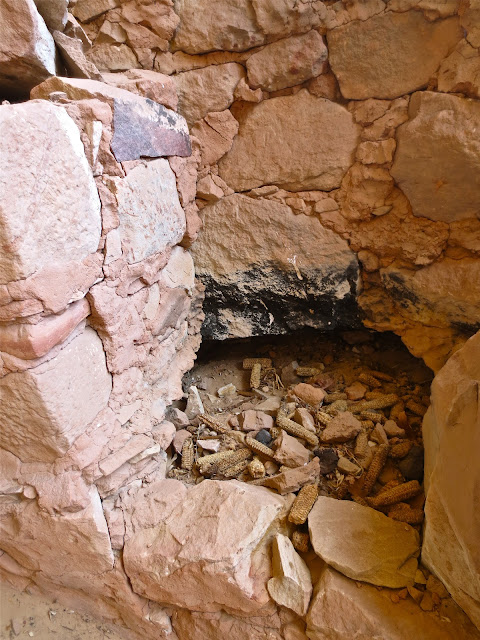 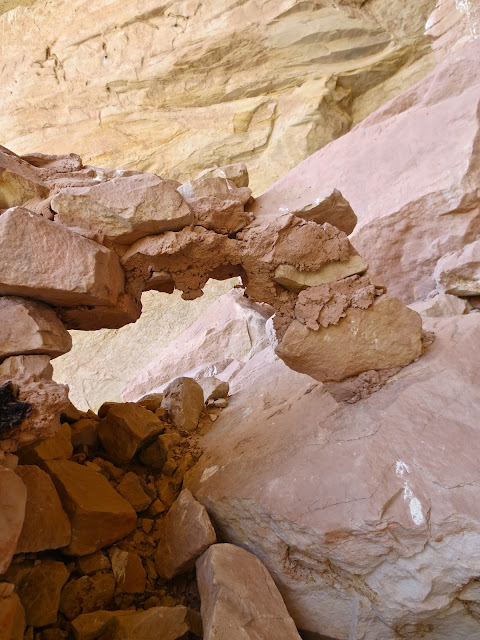 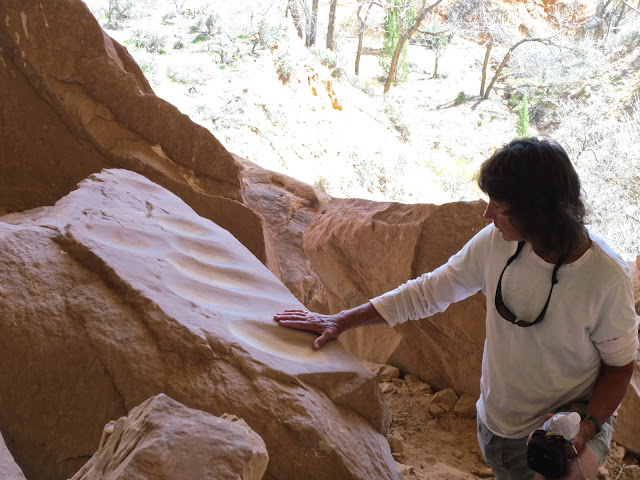 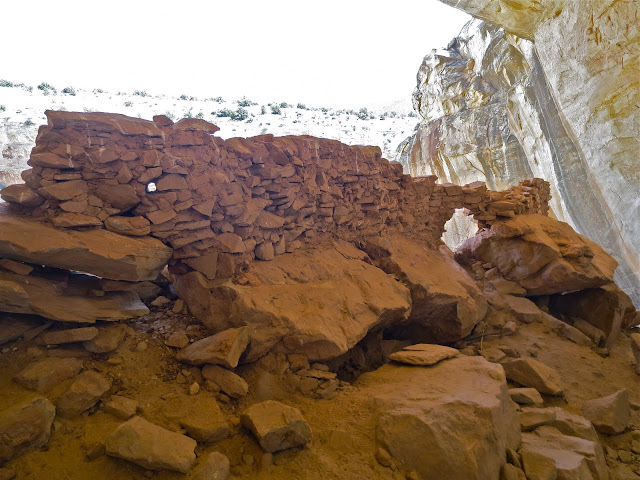 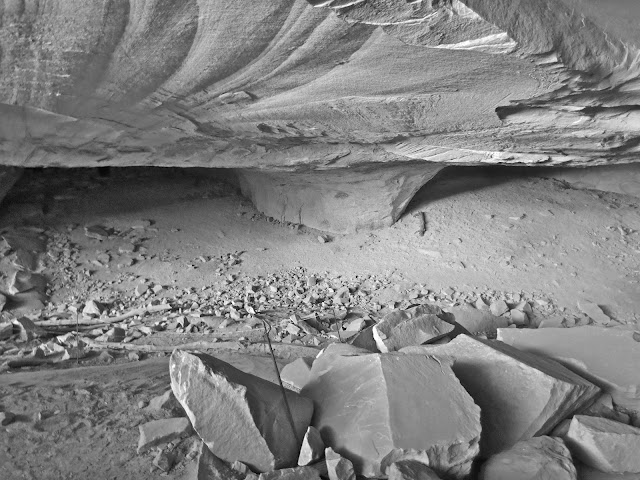 These caves went way back, and were actually a little too chilly for comfort. 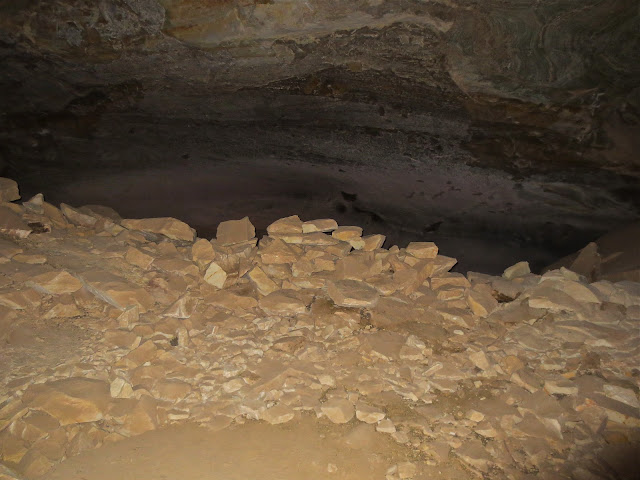 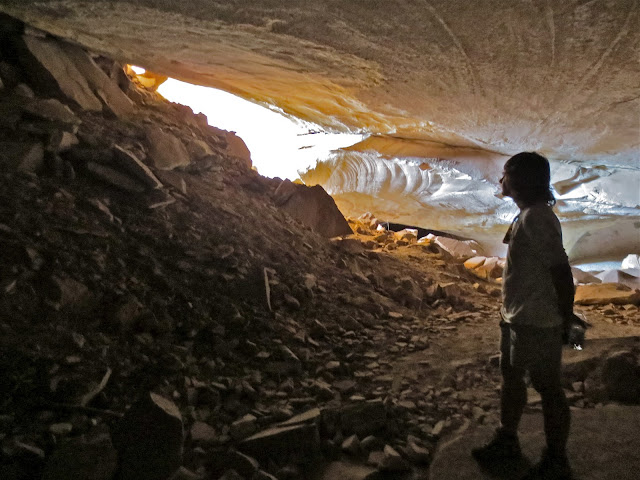 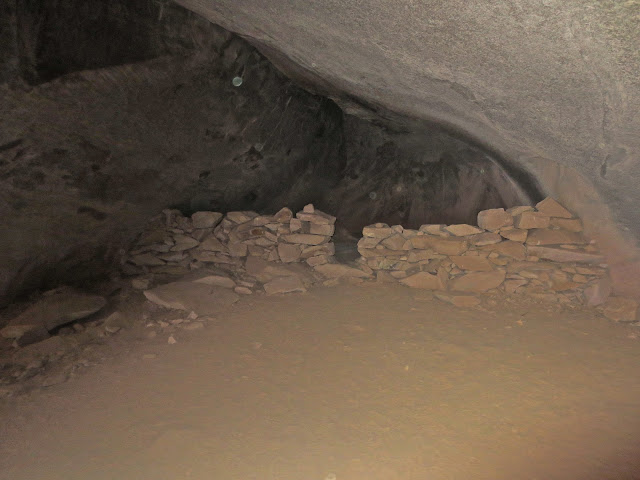 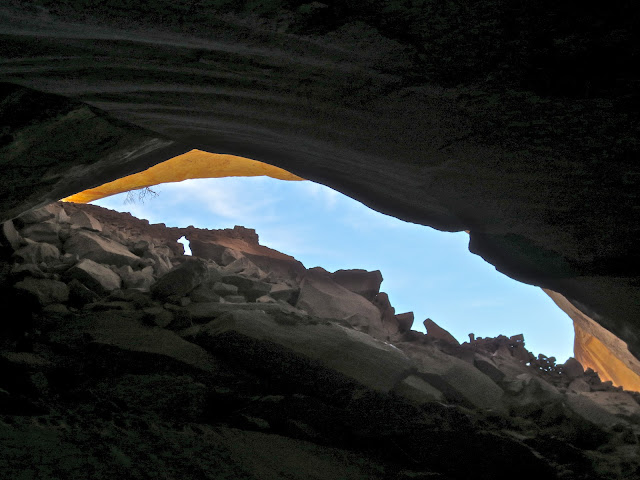 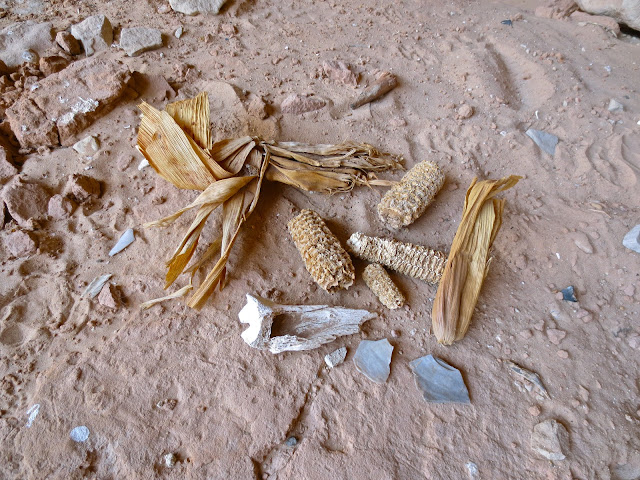 We found corncobs and husks. They must be pretty durable in dry climate to still be around hundreds of years after harvest.

Part II tomorrow...the greatest (to date) find ever!
Posted by Box Canyon Blog.com at 8:21 AM