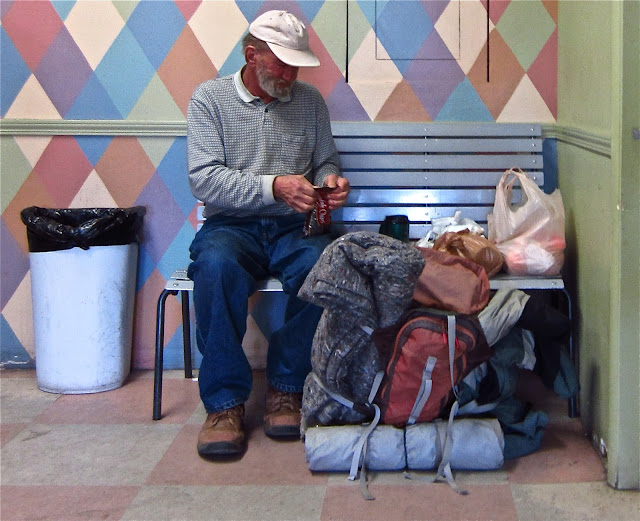 A kindly looking, impeccably groomed sixty something man sat quietly in the corner of a Sedona Laundromat, waiting on clothes to dry.

He was fiddling with a bag of chocolate chips, exercising patience and restraint with the ornery titanium-like bag that separated him from an indulgence in dark bliss. He was obviously familiar with the bag's notorious "hair trigger" design… one that often results in catastrophic rupture and sends precious morsels flying.

While treading a Maytag's allotted time to dry our RV rags I had nothing better to do than to sneak peeks at my laundry mate and guess his "plight." My initial take was that he was homeless, but somethings didn’t fit.

His grey beard and hair were trimmed… face, hands and clothes spotless. The same was true for his backpack and gear that never left his sight; not a speck grime or dust anywhere. His well used shoes looked a few sizes too big but stood out as being noticeably clean… right down to the edges of the soles. His dark blue Levis showed no signs of dust or wear, but like the shoes were too big, especially around the waist, as if he’d lost a good twenty pounds or so. It took a leather belt to hold the waistline in place. And here I was, looking like trailer trash compared to this “homeless” guy… in my disgusting Crocks, stained and thread bare shorts, a tee shirt that should have been in the laundry… and I’m sizing him up? What did my appearance say about me? I had to stifle a chuckle.

My G Q homeless guy had a large perfectly folded wool blanket firmly strapped to one side of his pack… a nylon shell jacket on the other. A tightly rolled ground tarp strapped to the bottom of his pack looked out-of-the-bag new. It was all too perfect… as if he had just walked out of the upscale second hand store next door. Perhaps he had, for his spotless attire and impeccable grooming didn't fit the stereotypical appearance of someone living on the "street." Even his hands were and face were clean, fingernails neatly trimmed, and there was no aroma of a smoky campfire about him.

Just as he had walked into the laundry he walked out, not to a vehicle or bike, just down the road… out of sight. I had almost struck up a conversation with him, but he never made eye contact. He kept to himself the whole time… made room in his pack for a few groceries, ate a handful of chocolate chips and folded the few clothes out of a dryer with the care and precision of an artist… right down to his tighty-whiteys.
Now I can’t stop thinking about him.

If you enjoyed the photos or thoughts on this post
please help out by clicking on the "f" (Facebook)
and/or "t" (twitter) box below
Thank you!!!!