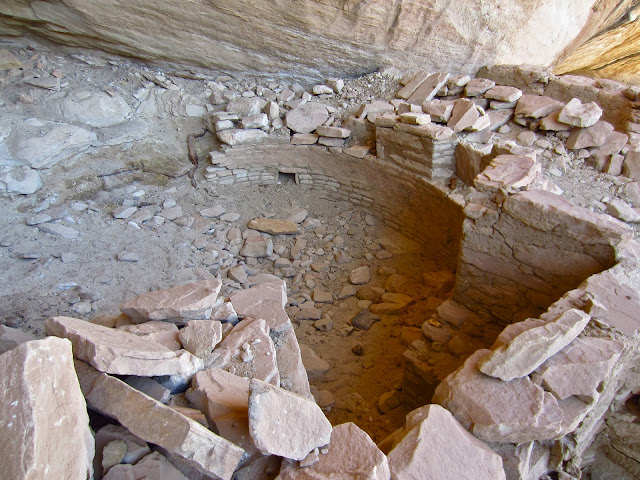 If one is willing stumble around in the side canyons off Butler Wash long enough... tolerate pesky No-see-ums buzzing eyes and ears... carry enough water to stave off dehydration... risk rattle snakes Gila Monsters and Lyme Disease... Ruin-ation will eventually come out of hiding. We had the good fortune to come across a sizable cliff dwelling... and it had a Kiva!

In case you are from another world or back east, a Kiva is the sacred ceremonial chamber Anasazi's used for matters of the Spirit. They are usually round, at least partially underground and have a roof with a small opening near the center for access with a ladder. The four posts supporting the roof are thought to represent the four cardinal directions. Below is a reference photo of a roofless Kiva in Mesa Verde National Park. 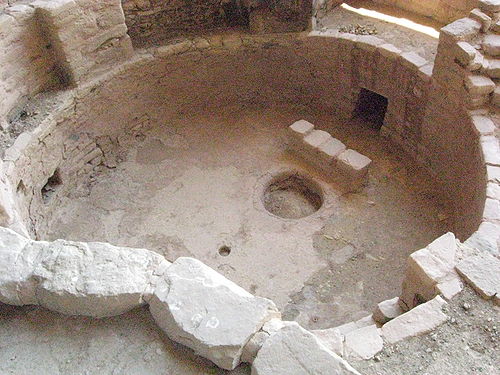 Take note of the fire ring and four stones. The stones functioned as crude thermostats. When placed in front of the rectangular subterranean fresh air shaft (rear) they allowed for control of airflow into the Kiva.


Now take note of the small hole in the floor... it's called a Sipapu (see paw poo), a passageway for the spirits of ancestors.  Can you imagine the intensity of some of the ceremonial events that took place in Kivas? Now have a look at photos of the Kiva we found and note their similarities to Mesa Verde.

Unlike previous cliff dwellings we found, this one had metate's... stone worn down with grooves from grinding corn and various seeds into flour.

It is in places like this I find humility and renewal. As reader Gaelyn commented on my post, "Feeling small in the Valley of the Gods," Humility is good for the soul. As someone who traversed the Grand Canyon rim to rim several times, she should know something about "humility."


I feed off of the positive energy of kindred spirit readers... adventurous fellow wanderers and life enthusiasts like Gaelyn, Dick, Scamps... anyone who pushes limits, anyone who must see what's over the next rise in the road or trail, anyone who latches on to a dream and doesn't let the hell of life wrest it from their grip, anyone who values freedom more than the security of a noxious treadmill and has the balls to go for it. Thank you for reminding me and other readers not to second guess choices and to keep following hearts and dreams.


Pen Pal reader, Claudia, sent me a link the other day with a note that said, "Looks like you're on the right track." I followed the link. After reading it I felt the force of the Universe alter my life-course ever so slightly... so as to avoid an eminent collision with a re-occuring treadmill.  Here is the bottom line of an article by Susie Steiner from The Guardian about the Top Five Regrets of Dying.


1. I wish I'd had the courage to live a life true to myself, not the life others expected of me.
"This was the most common regret of all. When people realise that their life is almost over and look back clearly on it, it is easy to see how many dreams have gone unfulfilled. Most people had not honoured even a half of their dreams and had to die knowing that it was due to choices they had made, or not made. Health brings a freedom very few realise, until they no longer have it."
2. I wish I hadn't worked so hard.
"This came from every male patient that I nursed. They missed their children's youth and their partner's companionship. Women also spoke of this regret, but as most were from an older generation, many of the female patients had not been breadwinners. All of the men I nursed deeply regretted spending so much of their lives on the treadmill of a work existence."
3. I wish I'd had the courage to express my feelings.
"Many people suppressed their feelings in order to keep peace with others. As a result, they settled for a mediocre existence and never became who they were truly capable of becoming. Many developed illnesses relating to the bitterness and resentment they carried as a result."
4. I wish I had stayed in touch with my friends.
"Often they would not truly realise the full benefits of old friends until their dying weeks and it was not always possible to track them down. Many had become so caught up in their own lives that they had let golden friendships slip by over the years. There were many deep regrets about not giving friendships the time and effort that they deserved. Everyone misses their friends when they are dying."
5. I wish that I had let myself be happier.
"This is a surprisingly common one. Many did not realise until the end that happiness is a choice. They had stayed stuck in old patterns and habits. The so-called 'comfort' of familiarity overflowed into their emotions, as well as their physical lives. Fear of change had them pretending to others, and to their selves, that they were content, when deep within, they longed to laugh properly and have silliness in their life again."
Just something to think about on a Sunday Afternoon...
Posted by Box Canyon Blog.com at 10:06 AM