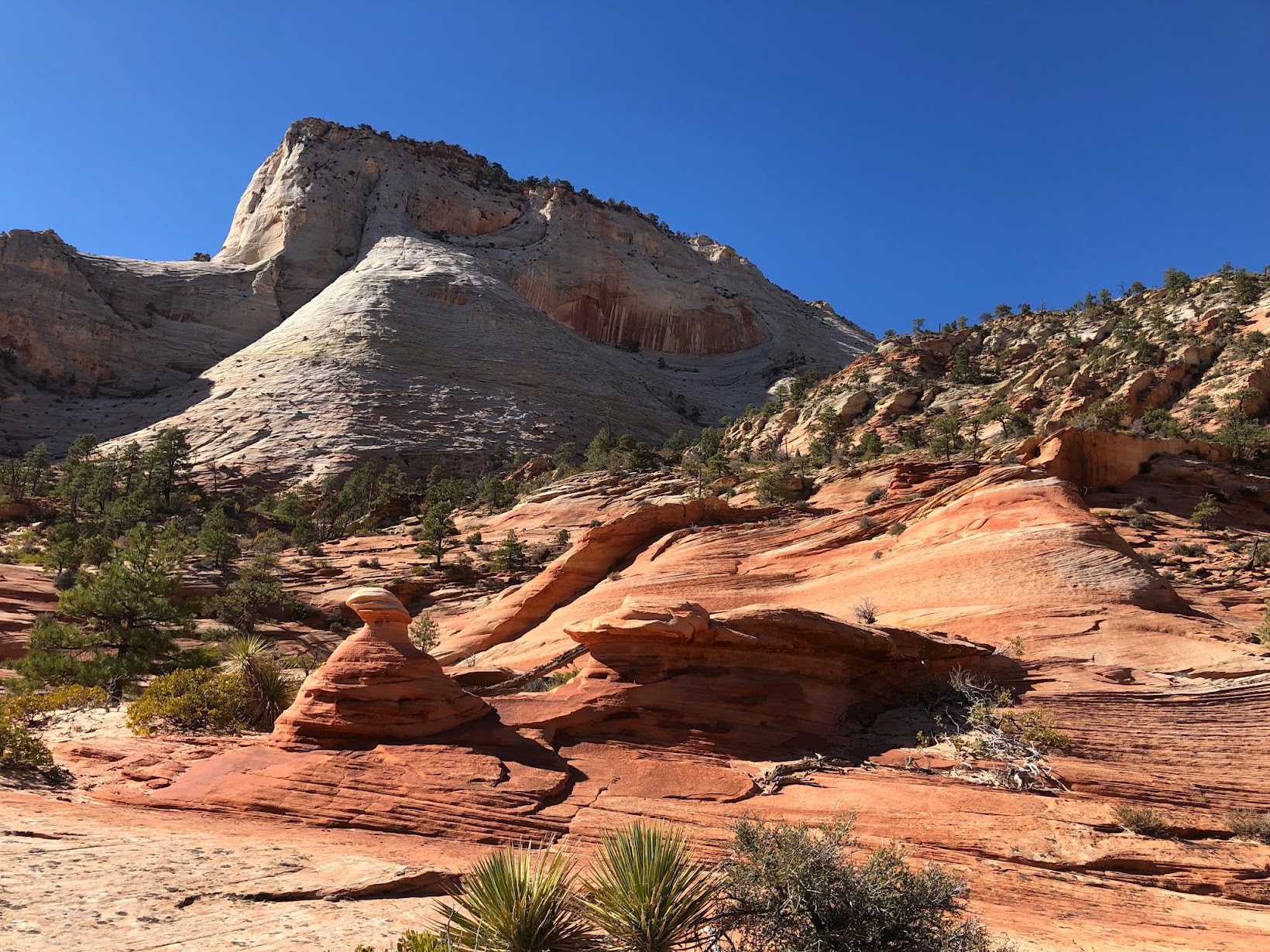 Wilderness is the Promised Land we seek and need. It nourishes, nurtures, and restores our urban-blighted souls.

Foreword
It's Wednesday afternoon as I pen this post from a Southwest Utah boondock. Tired from yesterday's too-long hike, we were lulled to sleep early by the fragrance and pitter patter of rain-precious-rain on the Rv roof last night. In fact, it rained all night and continues even now as I type.

Thus we are trapped a good half mile off the main county road by slick, gooey, red clay mud. It surrounds our home-away-from-home like a moat...the kind of mud that balls up on your shoes and tires and renders walking or navigation unthinkable, if not impossible.

And now they are predicting rain for tonight and tomorrow. Good for Southwest Utah, where it hasn't rained for over (imagine this) FIVE months. Not a drop. A record since they've been keeping tract of such things.

On the plus side, nothing compares with the fragrance of rain in the desert. So sweet. It reminds me of the summer monsoon season while growing up in Arid-Zona...the scent of ozone and creosote bush hanging in the air after each storm. With less creosote bush, Utah smells different...an earthy mix of wet dirt and sage. Still, it's an aphrodisiac...for me anyway. Only two things have the power to instantaneously take me back 50 years: A song and/or an imprinted aroma from childhood. Mom's fried chicken every Sunday is another smell from childhood...

So this post is written under the influence of rain...and maybe a couple beers. What else to do on a soggy day, trapped by a mud moat?

We sat quietly on a remote, precipitous ridge-line saddle beneath East Temple...munching lunch and staring into the harsh, unyielding wilderness that stood between us and our attempt to make a loop-hike through Zion's rugged back-a-beyond. 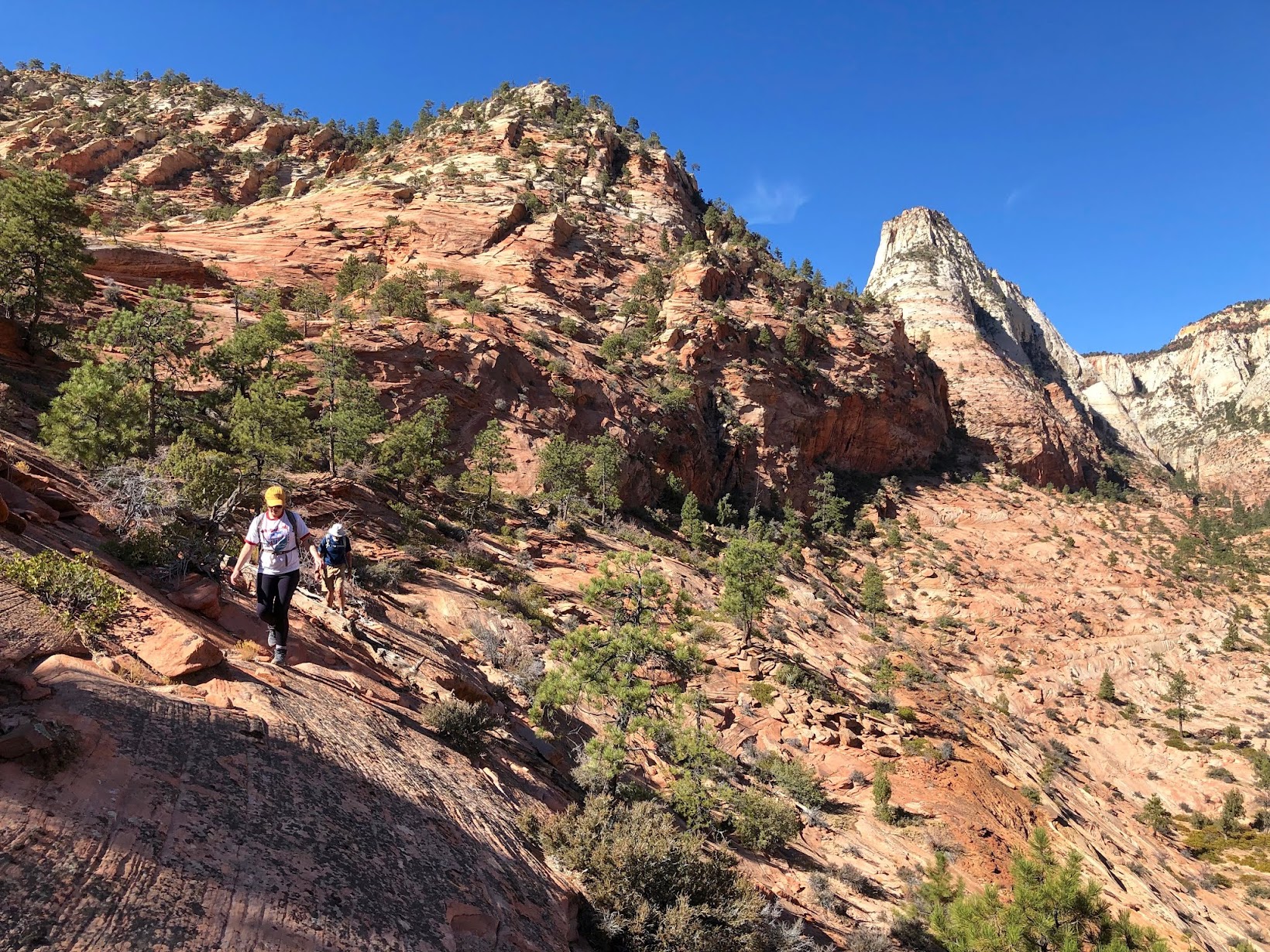 After a snack, I went in search of a reasonable way down the backside of our saddle perch. My long search turned up nothing  doable without ropes. If unsuccessful, it was the last place I would want to be stranded or bushwhacking for some nonexistent loop.
Eventually Chris, Juliet and Bobbie joined me in the "hunt" for a safe way down from East Temple's hallowed perch. We find two cairns that lead to the edge of a steep sandstone wall. We start down, looking for the next cairn, but it never materializes. Ever the optimist, Chris thinks this slope is doable. To me, well, it makes me want to poop my pants.

It's hard to take photos while butt-scooching, grasping for brittle bushes and tree limbs to stem gravity's eternal tug. So there are few from that part of the descent. 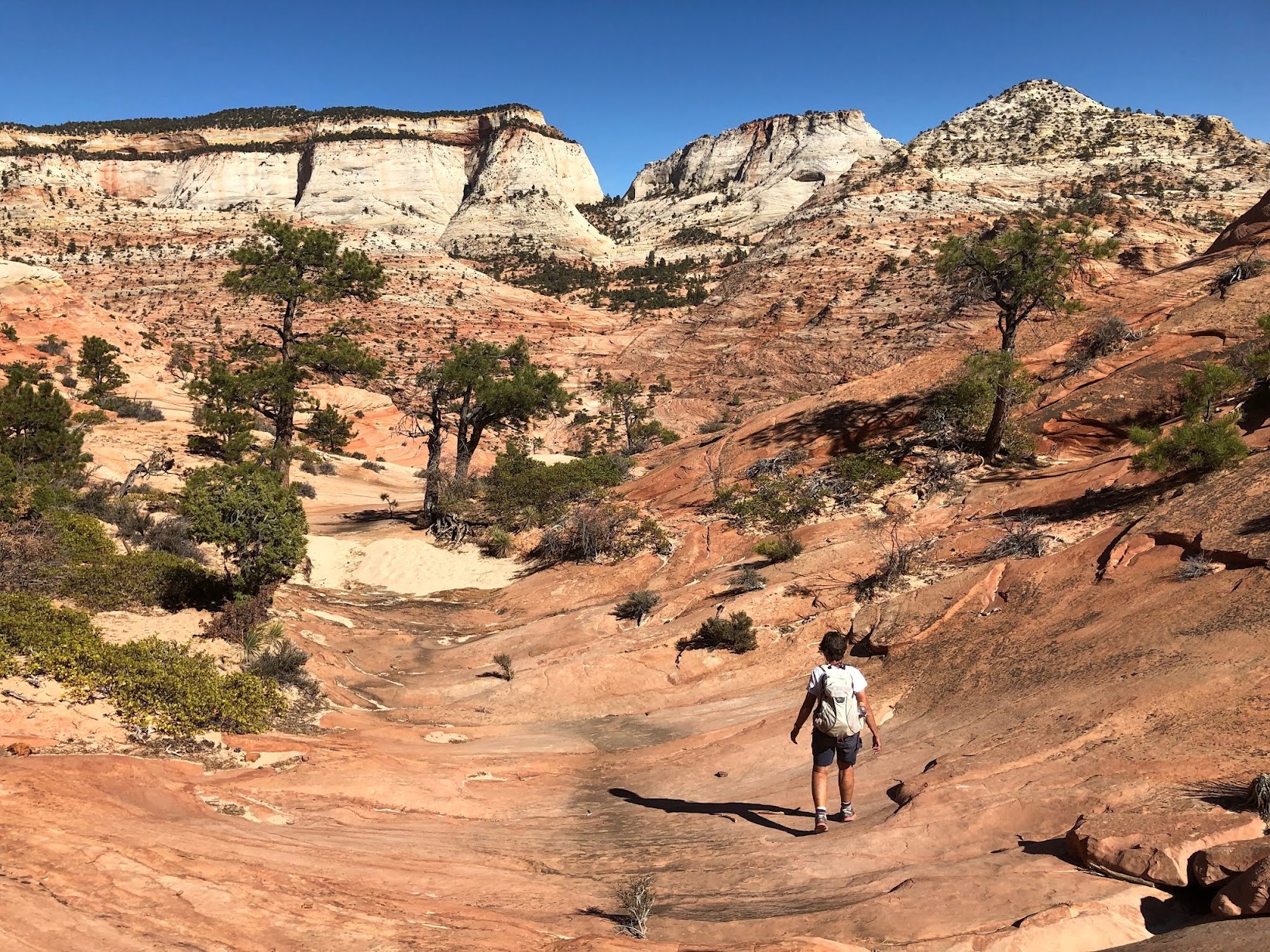 Sure enough, Chris was right. Finally we were able to get off our butts and stand upright...trust our shoes. 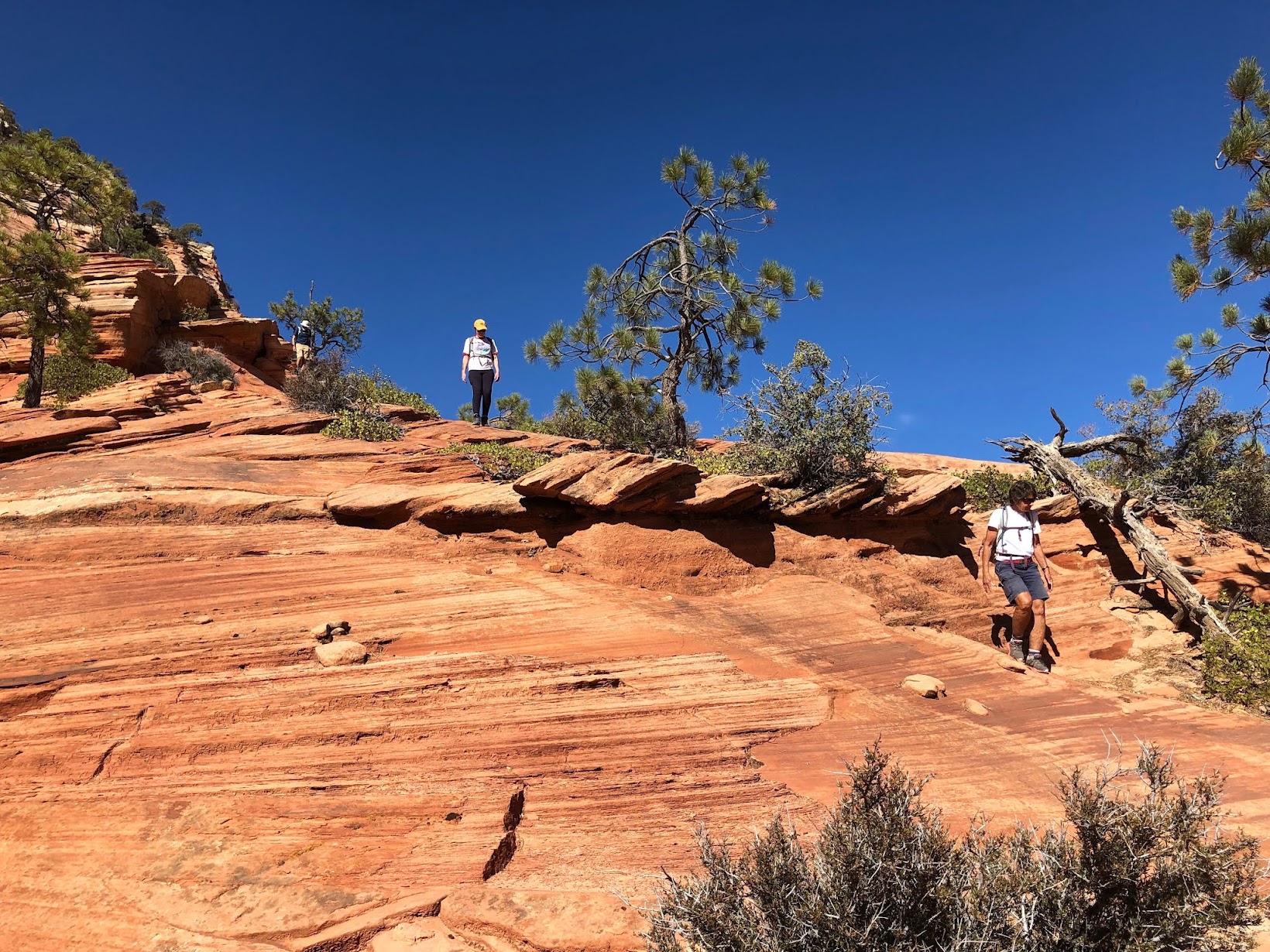 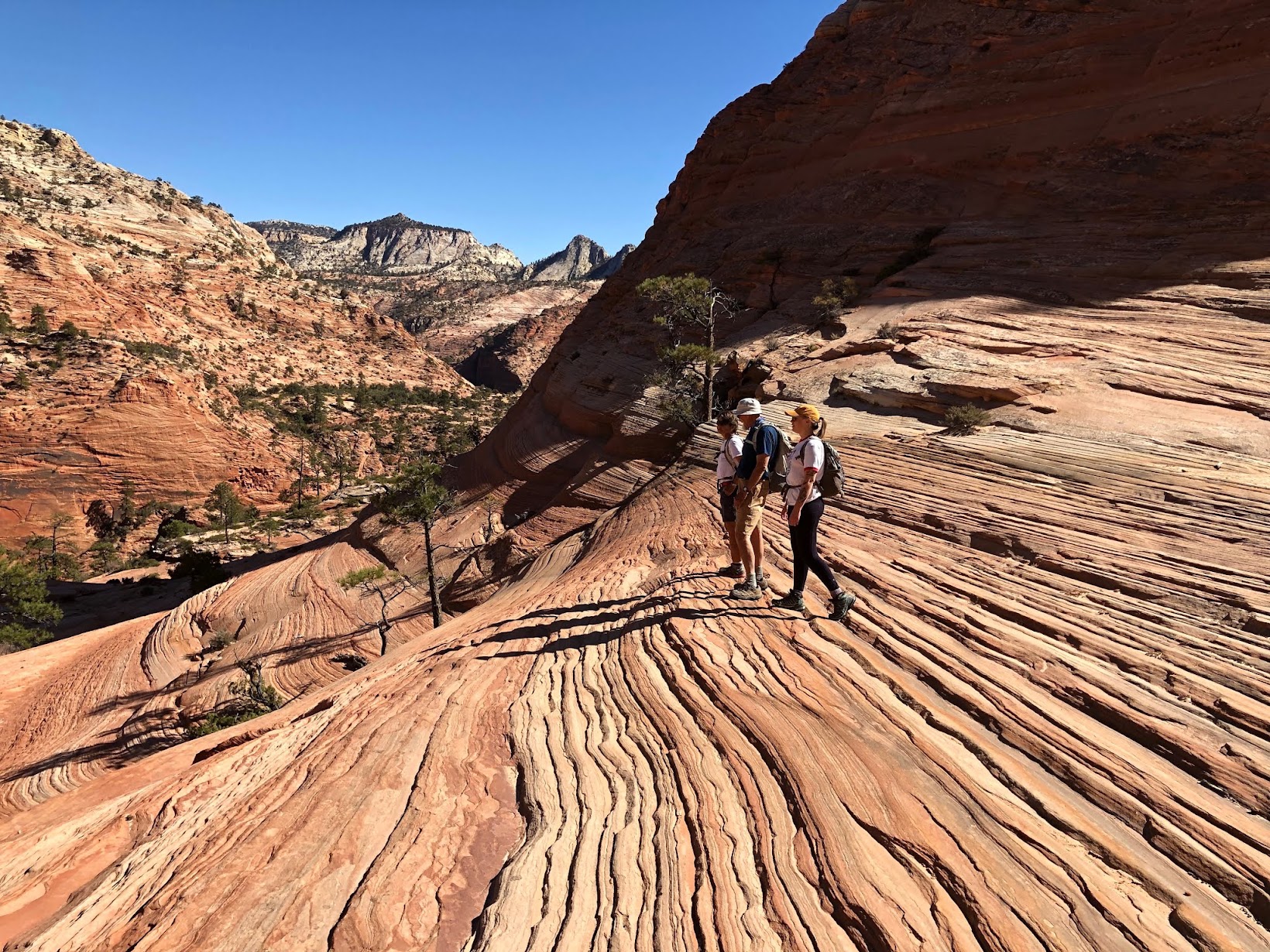 It's a magical rippled maze, and we have it all to ourselves. Mission accomplished...well, almost. 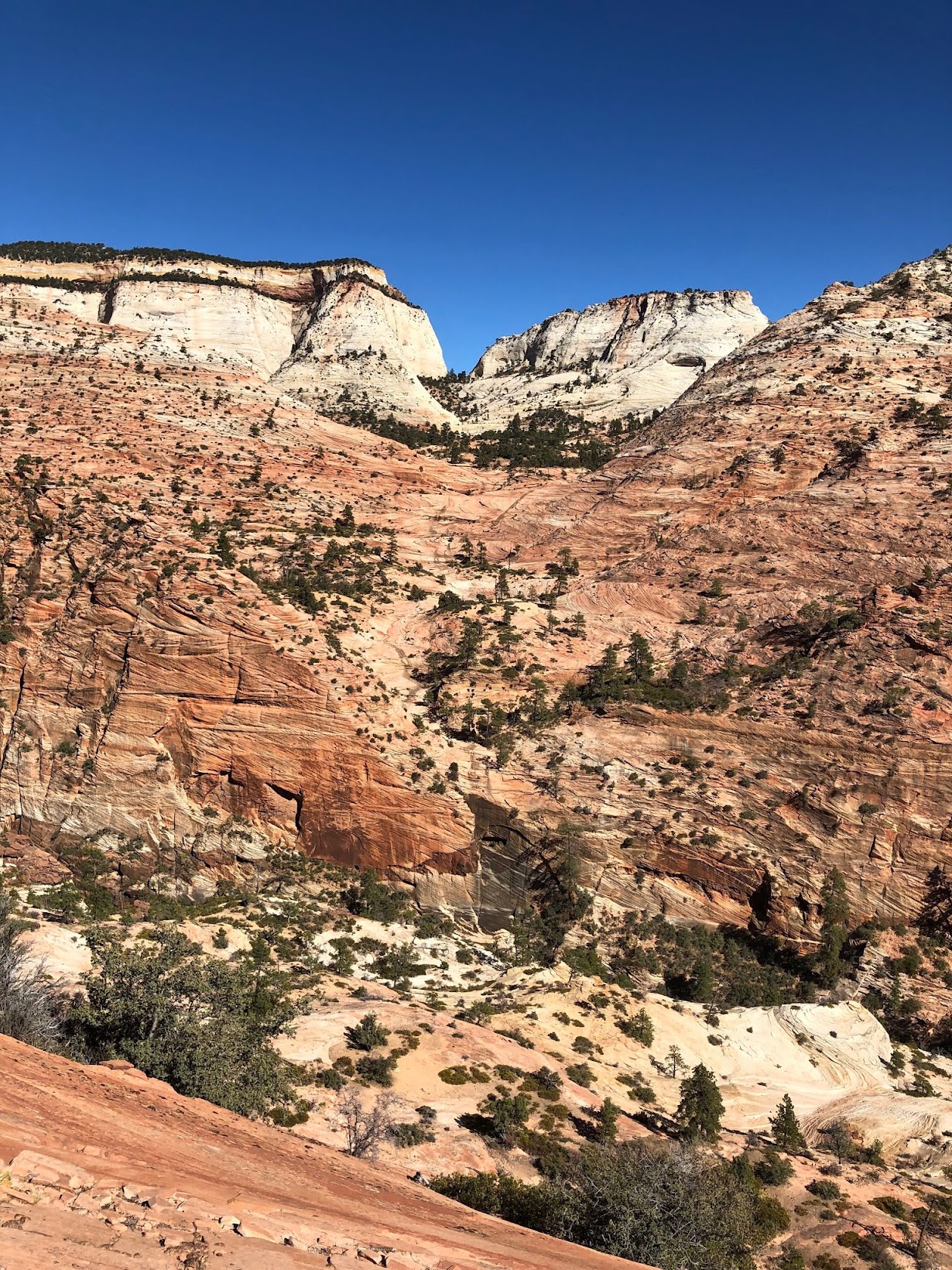 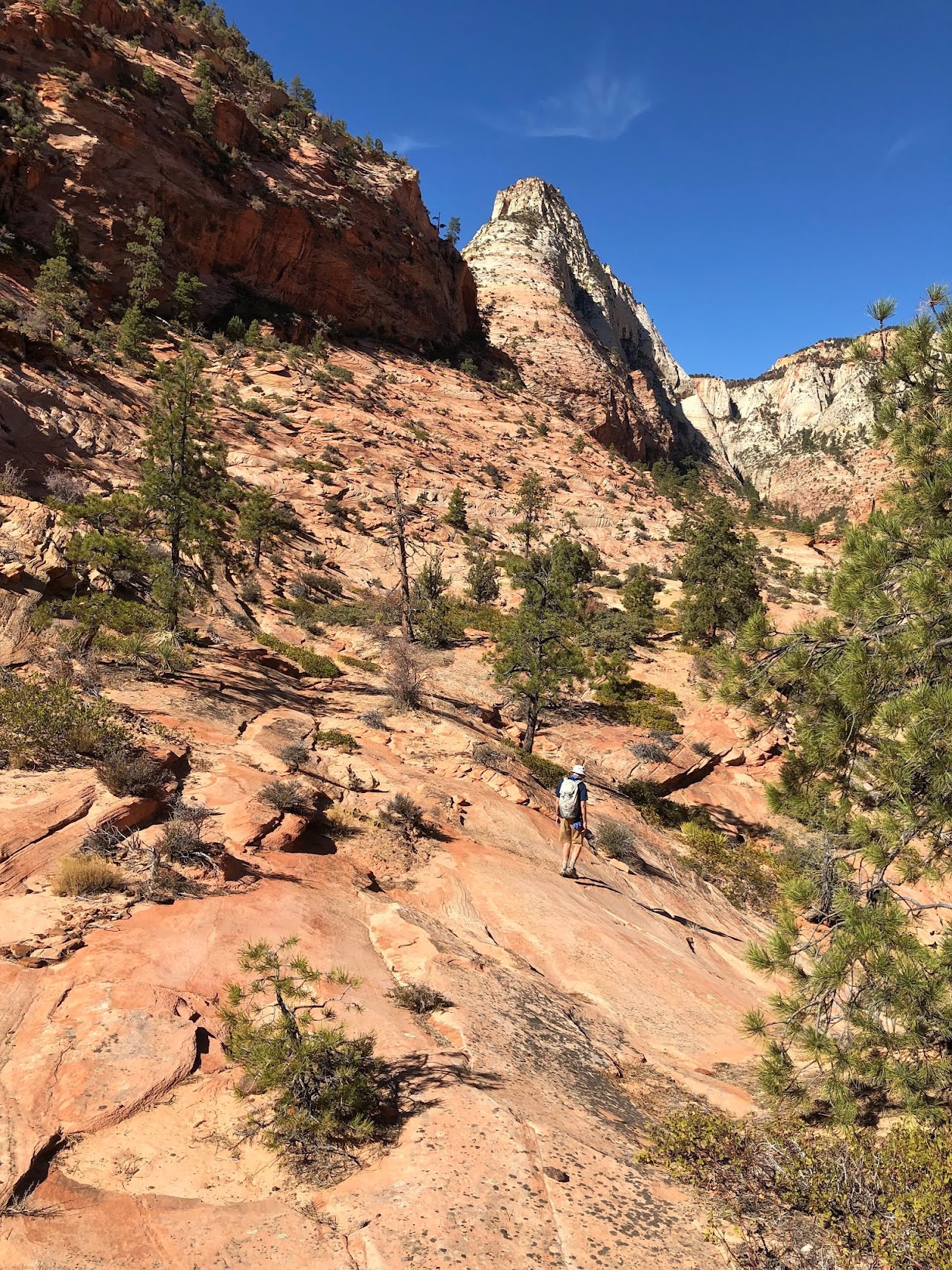 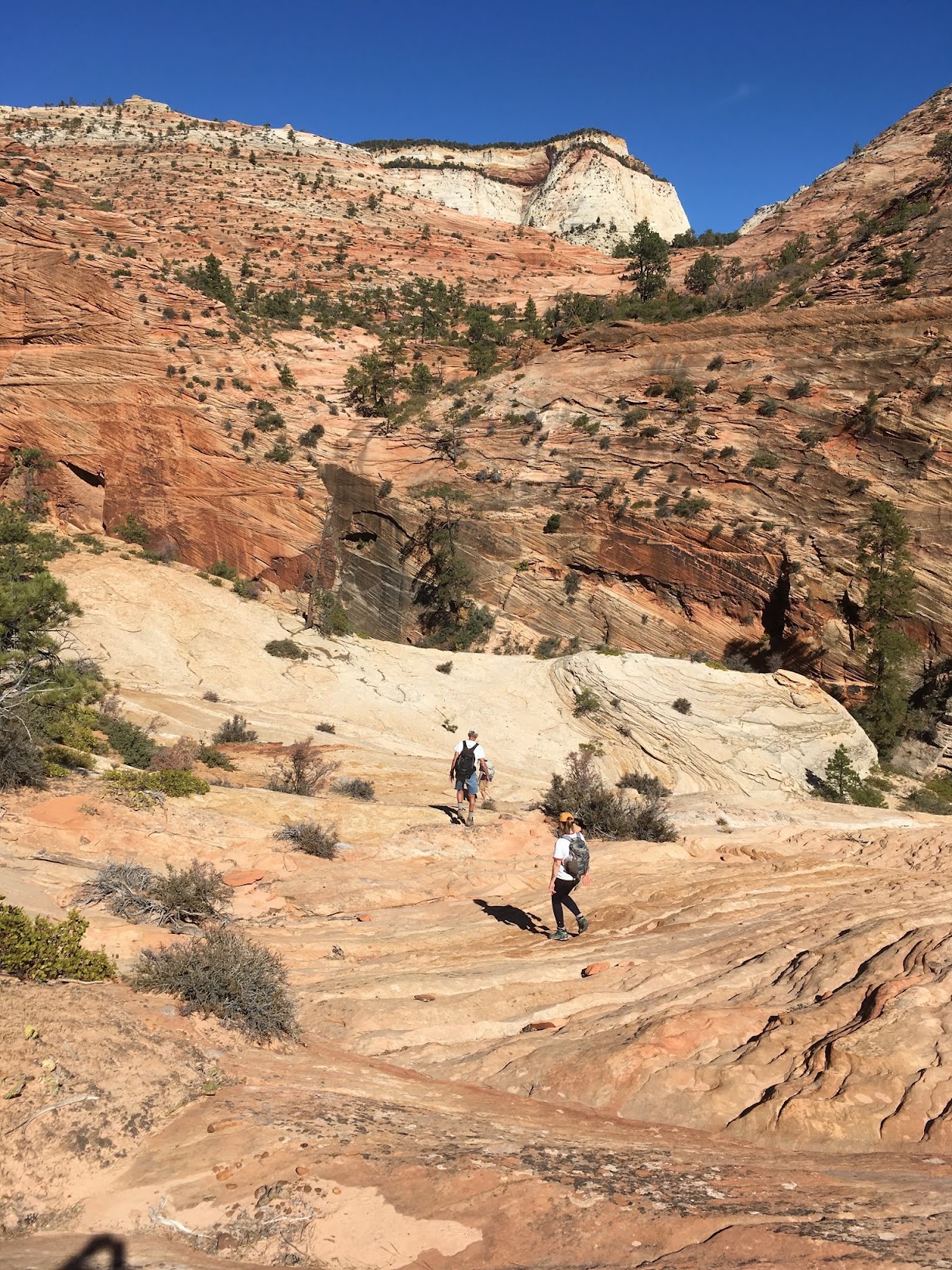 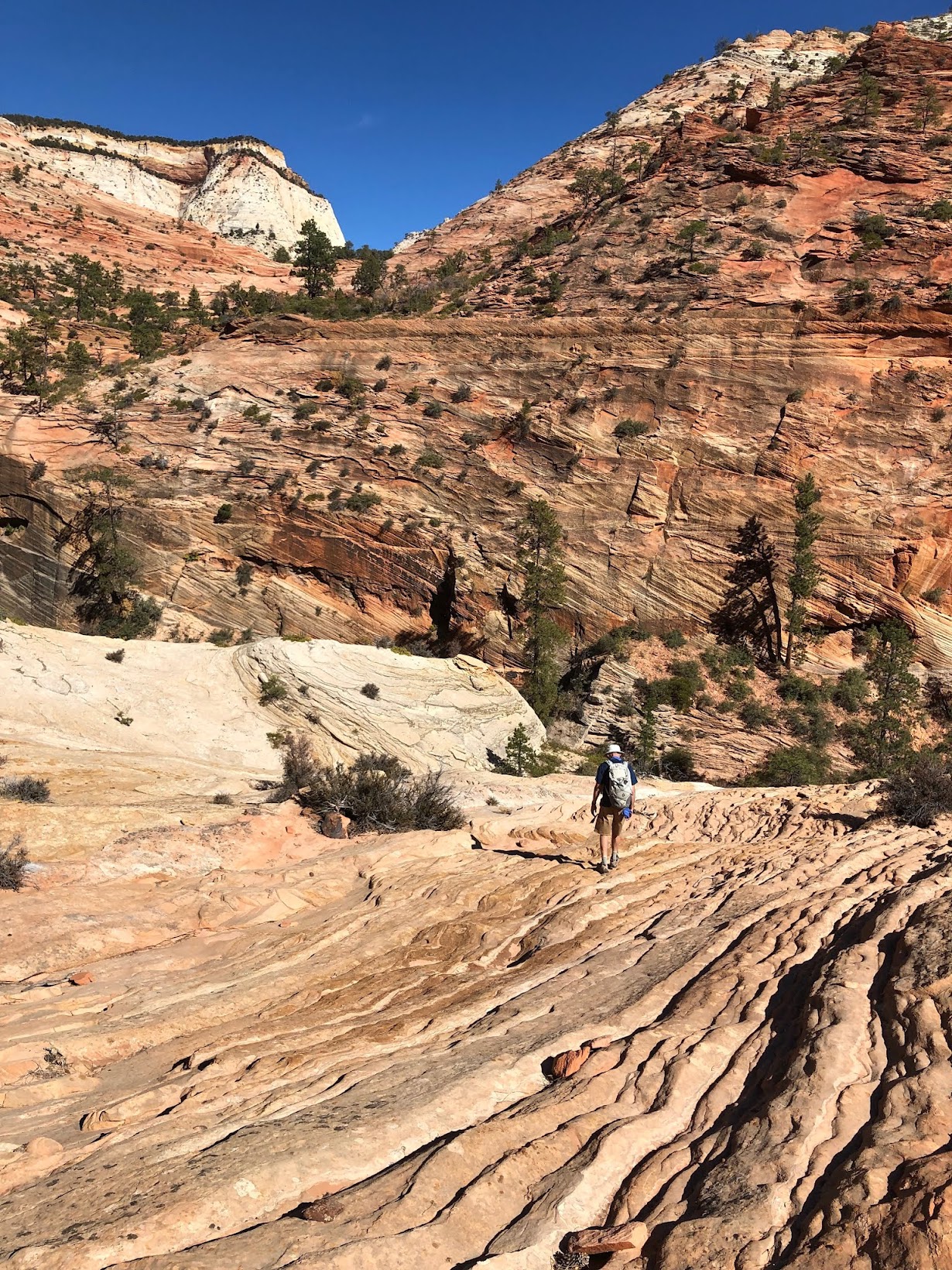 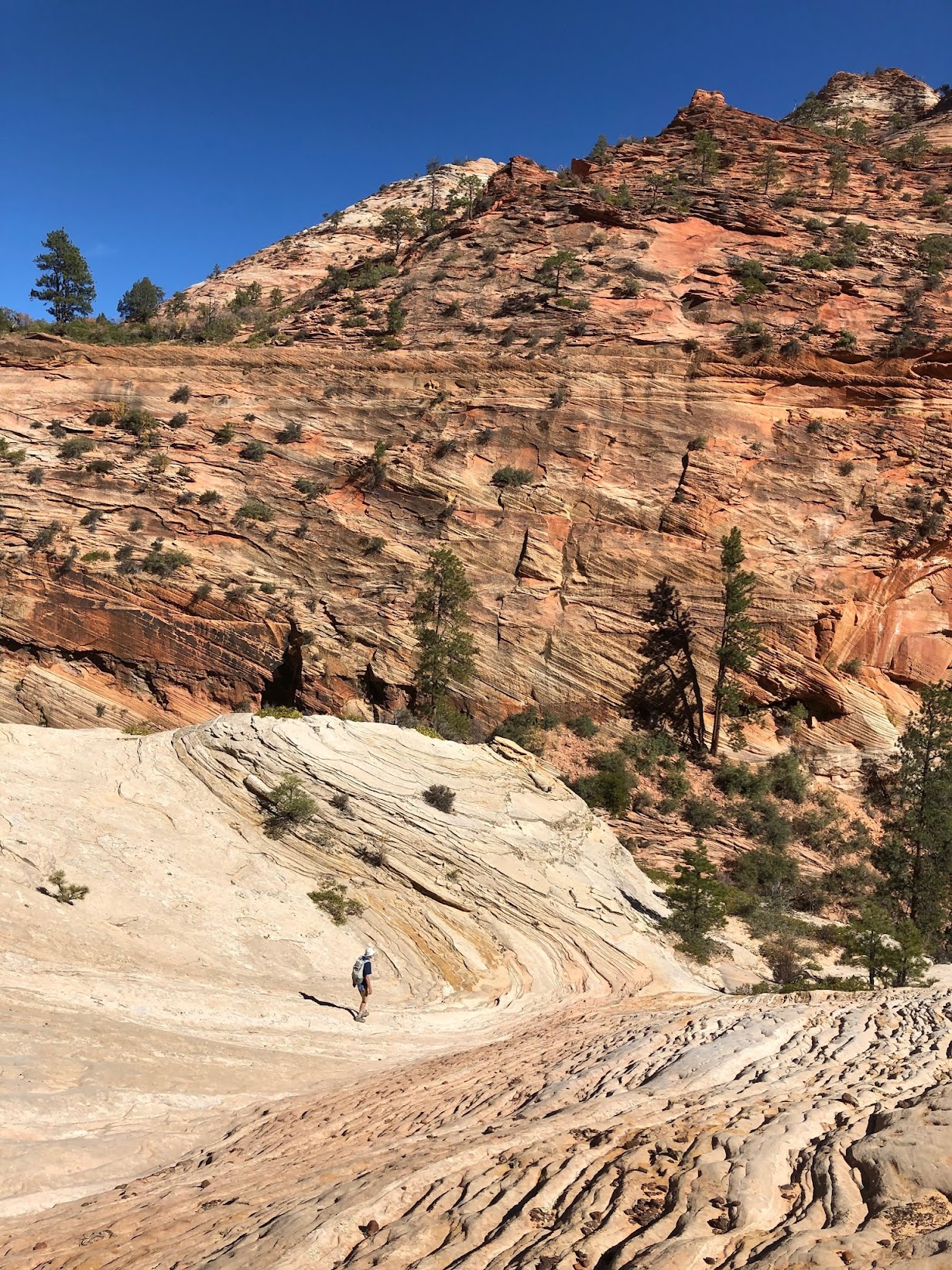 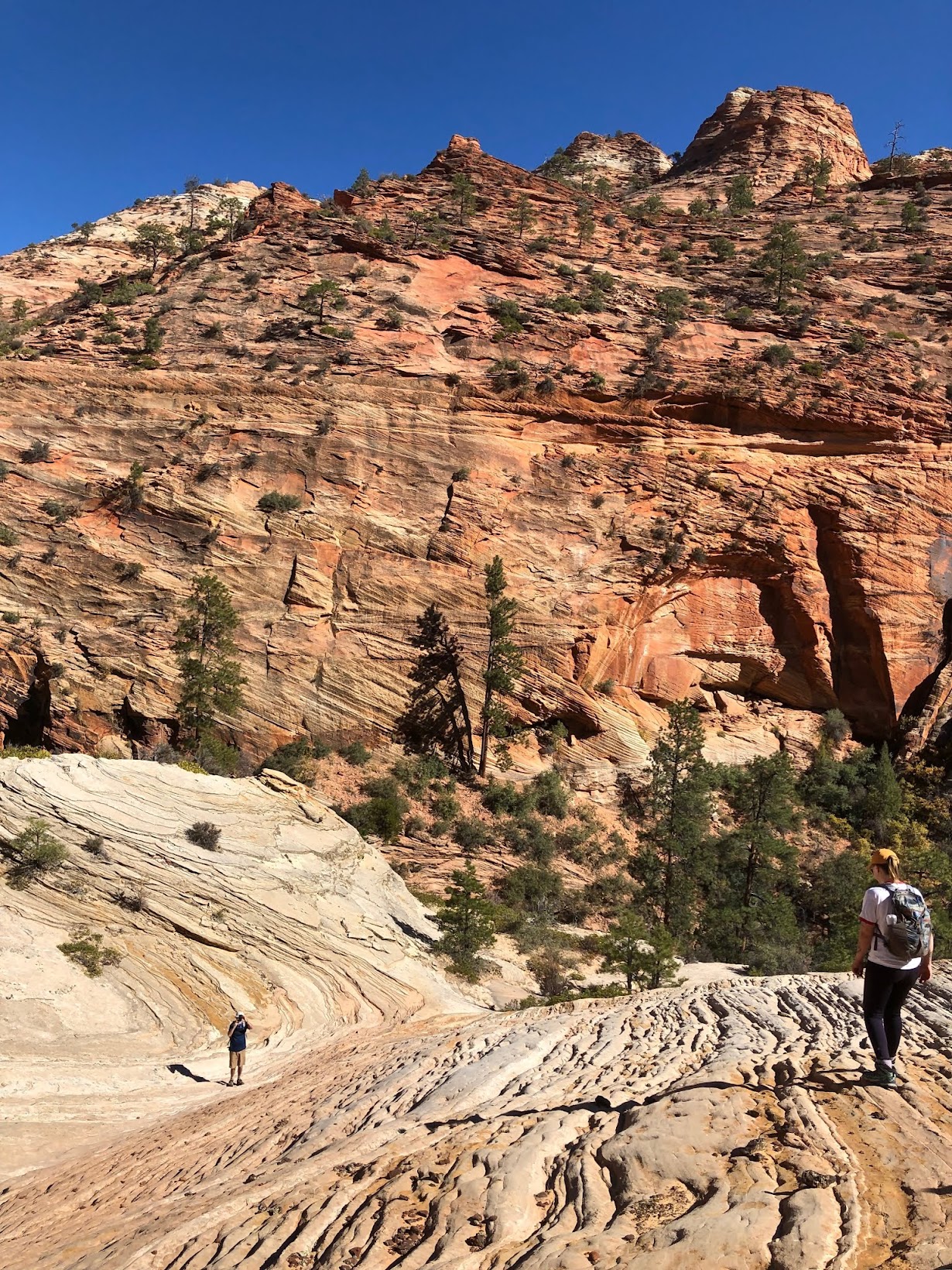 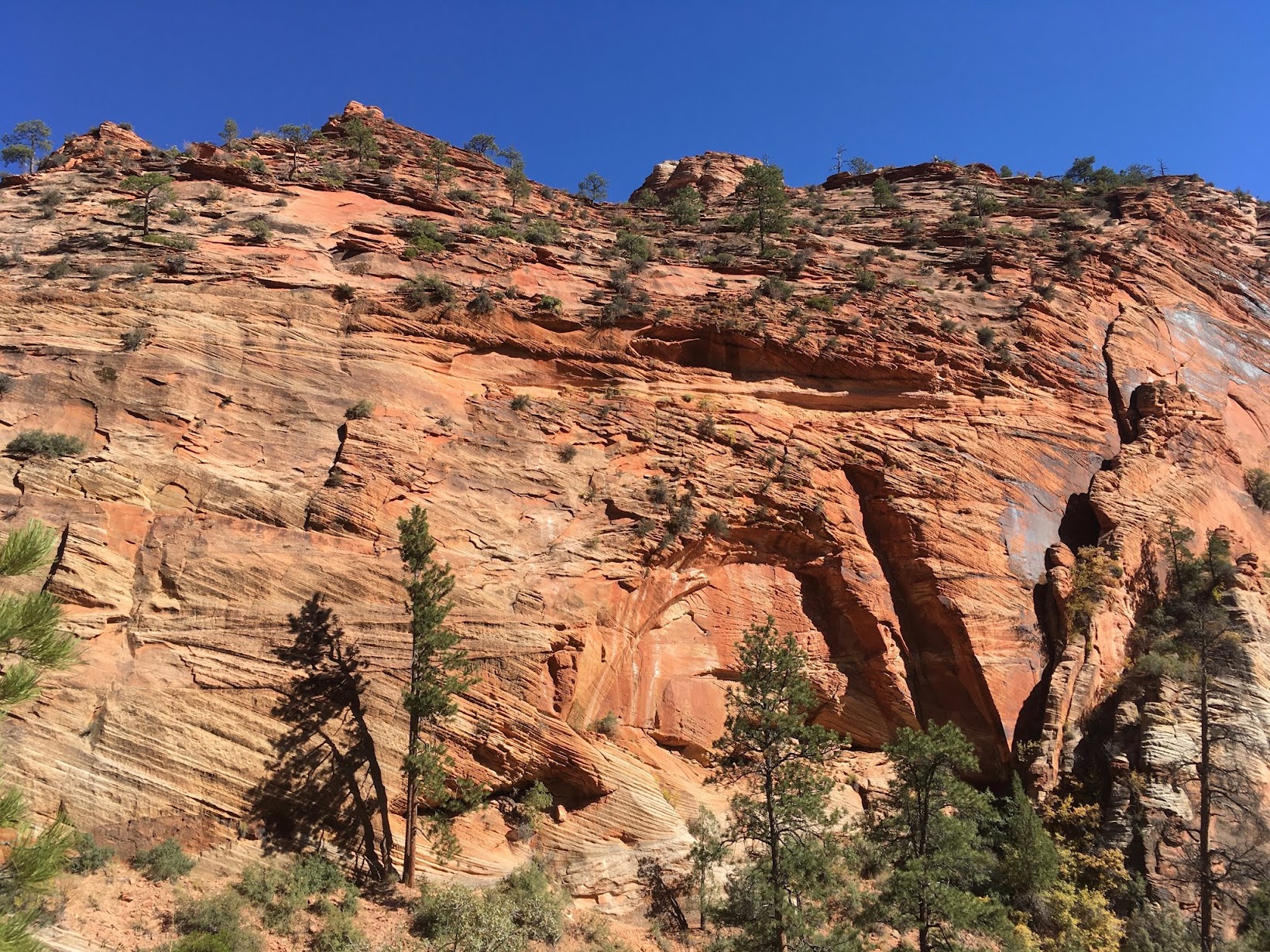 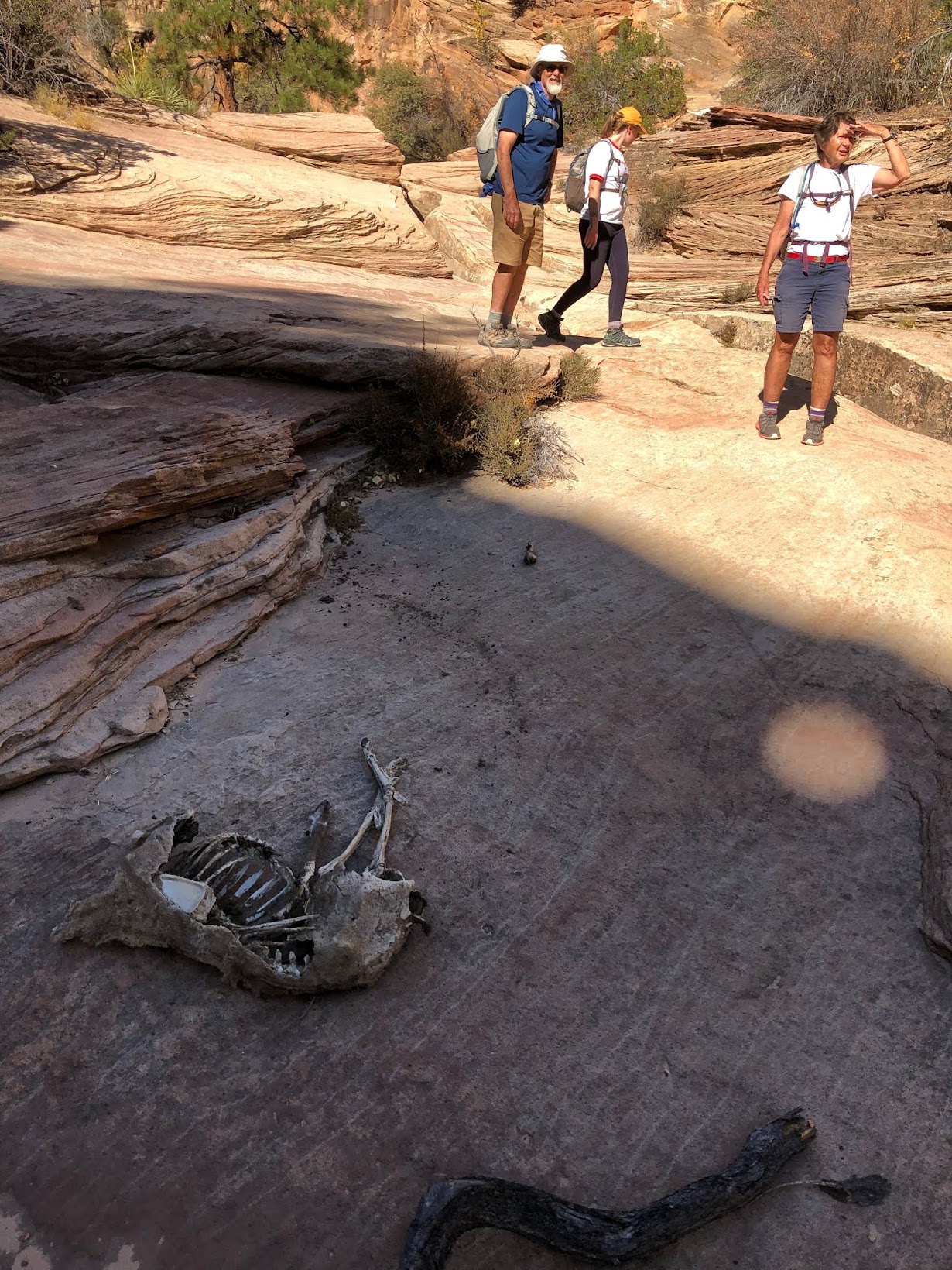 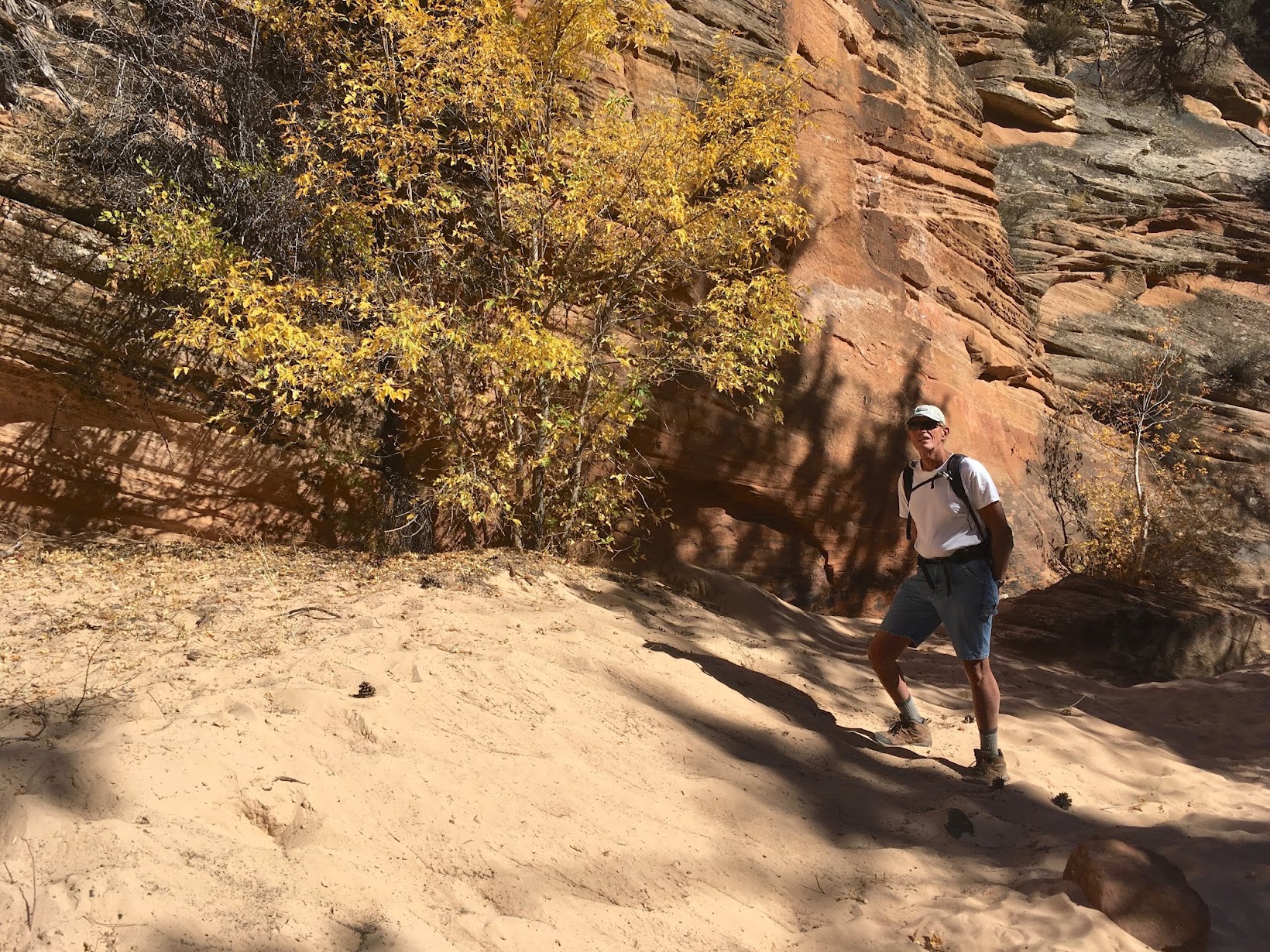 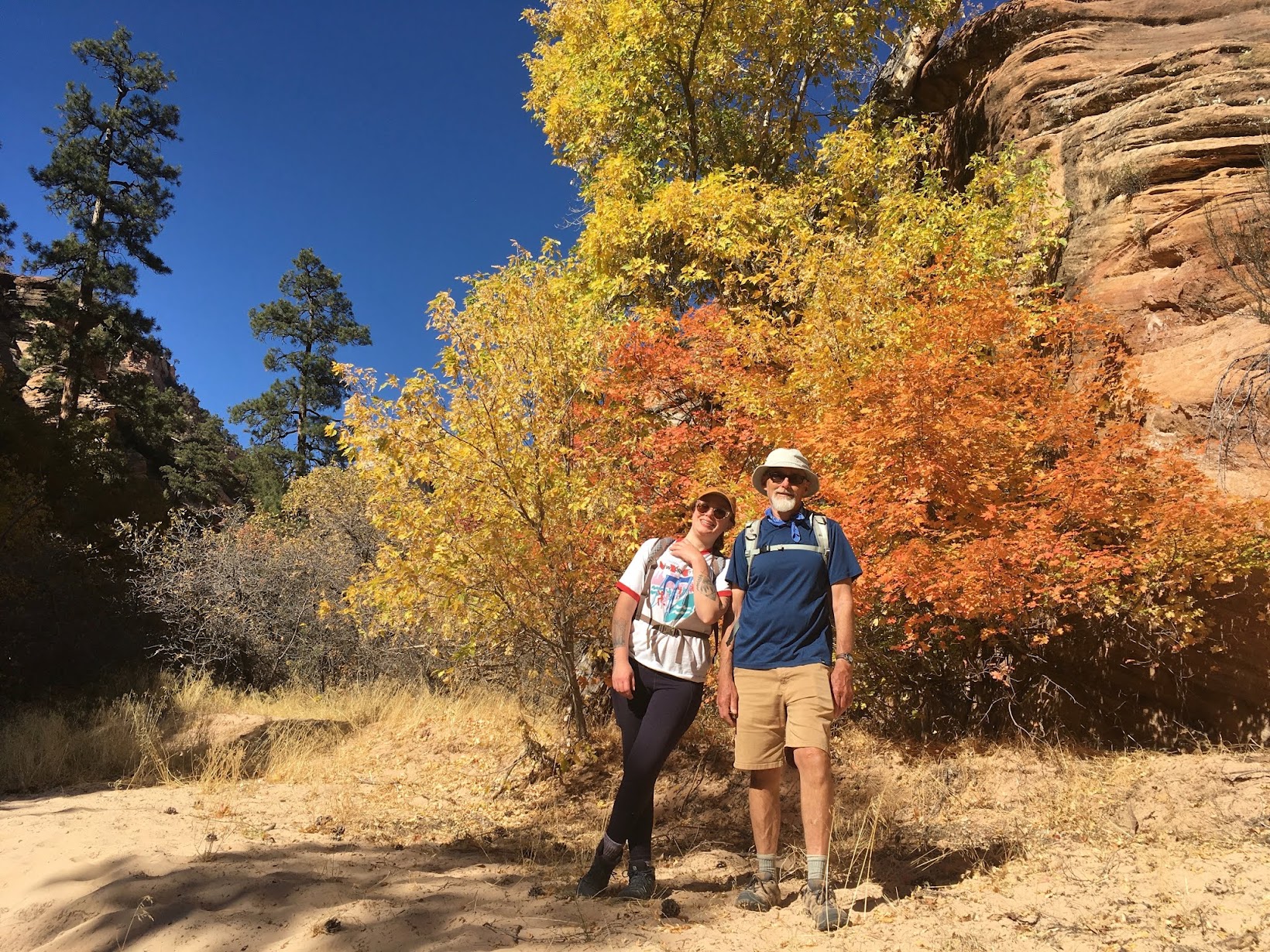 Footprints in the sandy bottom of Pine Canyon were a welcome sight. Barring choke-stones and/or pour-offs, we could be walking pavement back to the car within 30 minutes or so.

What a glorious outing...new "dots" with good friends, along with a dose of adrenaline. Sleep comes easy after such a day. Most of all, though, it's the memories made...memories that we'll take with us and look back on when the time eventually comes, and we know it will, when we have been forced to rein in our "risky business." One misstep and it could be tomorrow. With a little luck, and if we just keep moving, it might be as much as 10 or more years from now. Guess we'll see.

Peace Out.
Hope you enjoyed the wilderness "back-a-beyond" photos. Heading out now to wander through Many Pools Canyon...see how much water is flowing, or "pooling."
This post courtesy of Mark, Bobbie, Chris and Juliet.

Weather update: On the heals of Southwest Utah's record drought comes record rainfall.
Posted by Box Canyon Blog.com at 7:46 AM