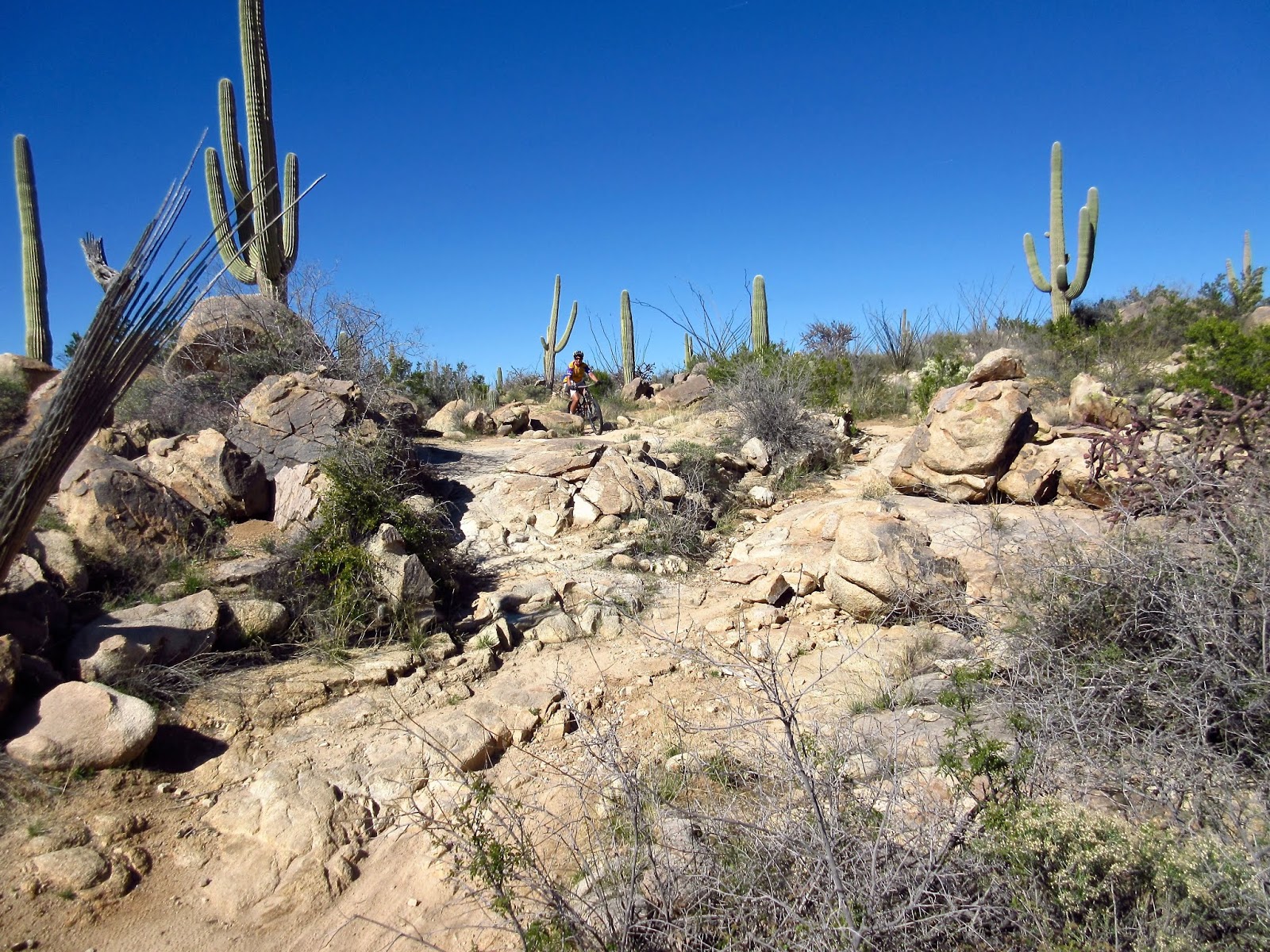 “It is important to emphasize that this is science, not mysticism...an ancient skill that we are all born to practice. This innate "sense" has been largely forgotten...because modern lifestyles demand we engage in mostly logical, deductive thinking, rather than using our intuition. Our ability to extract meaning from interrelated phenomena such as bird behavior, wind direction, plant growth, and sunlight has atrophied." “The Nature Instinct: Relearning Our Lost Intuition for the Inner Workings of the Natural World,’’ by Tristan Gooley.

Indeed. Makes me wonder how long today's generation would last outdoors, you know, without the creature comforts upon which they've grown more helpless and dependent? Like, could they even start a fire? Perhaps...if they Googled it. 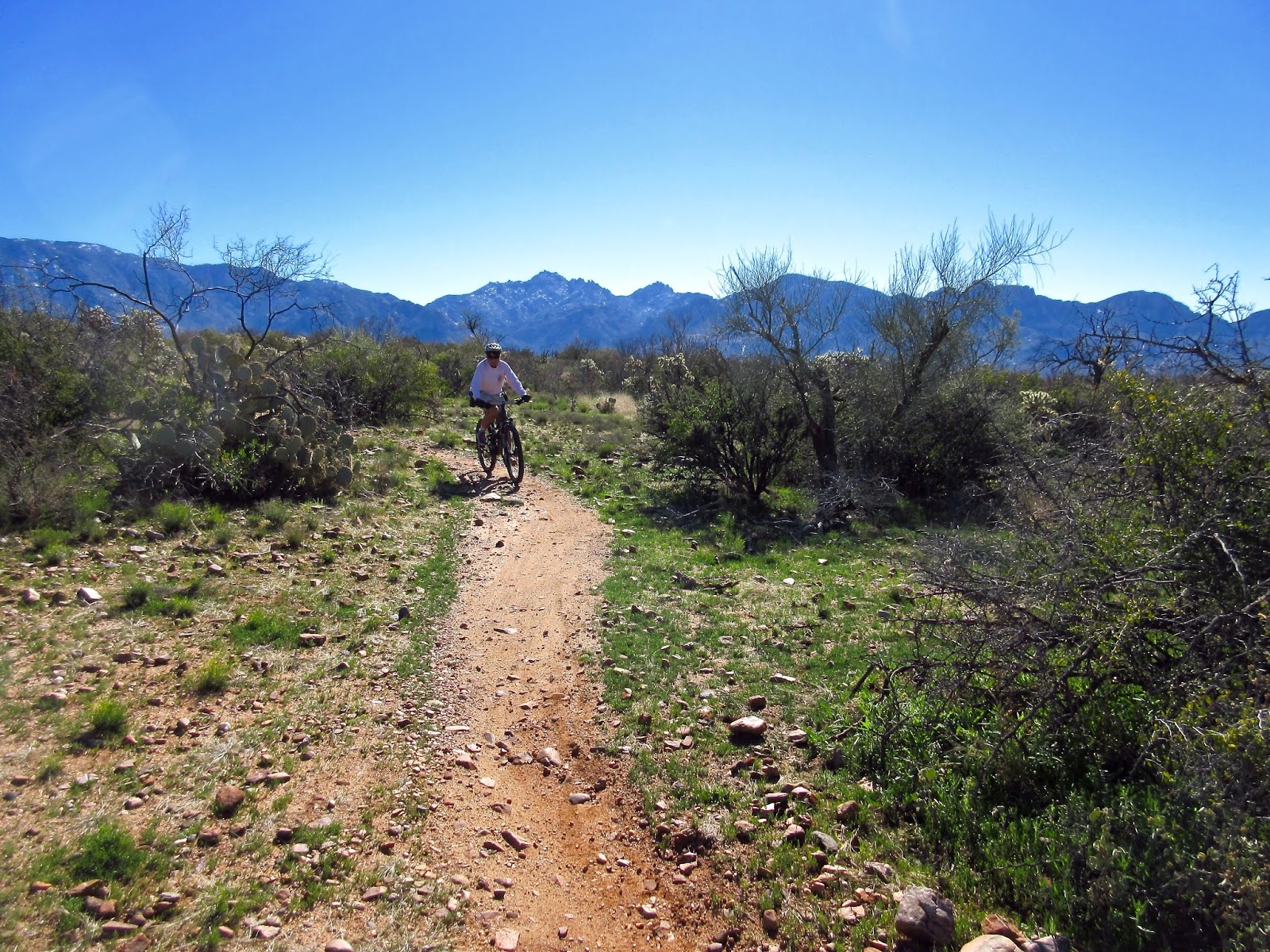 We decided to bike Honeybee on this day's outing, a long and lovely trail that winds through a Sonoran desert forest of prickly cholla, now interspersed with eruptions of poppies.

Honeybee is Sandwiched between the Catalina Mountains and smaller Tortolita (turtle) range. The name, Honeybee, comes from Native American peoples known as Hohokam, "who heavily occupied the area for 700 years beginning around AD 500. In the eastern foothills of the Tortolita Mountains are ruins of Honeybee Village, a former Hohokam pueblo." 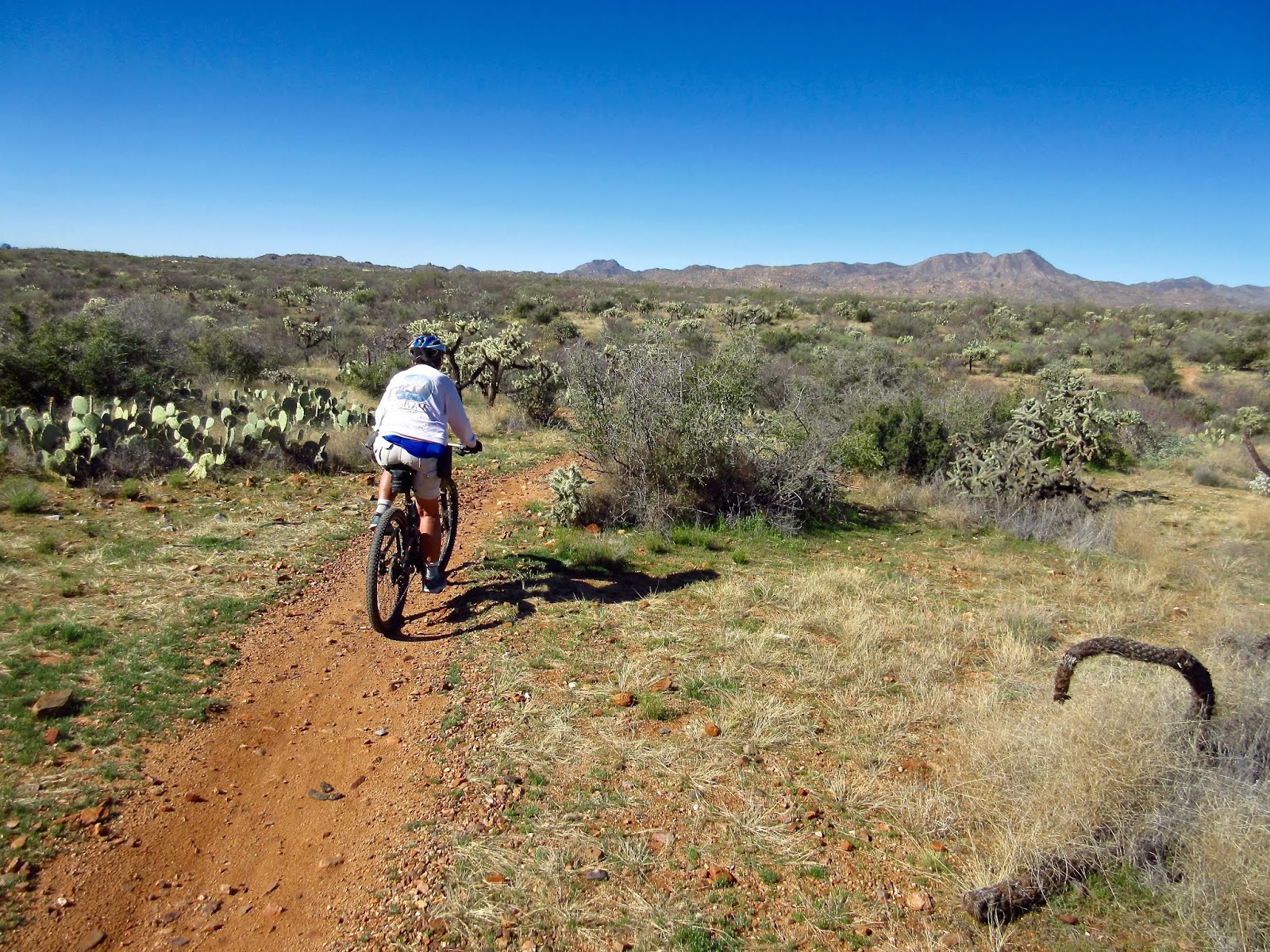 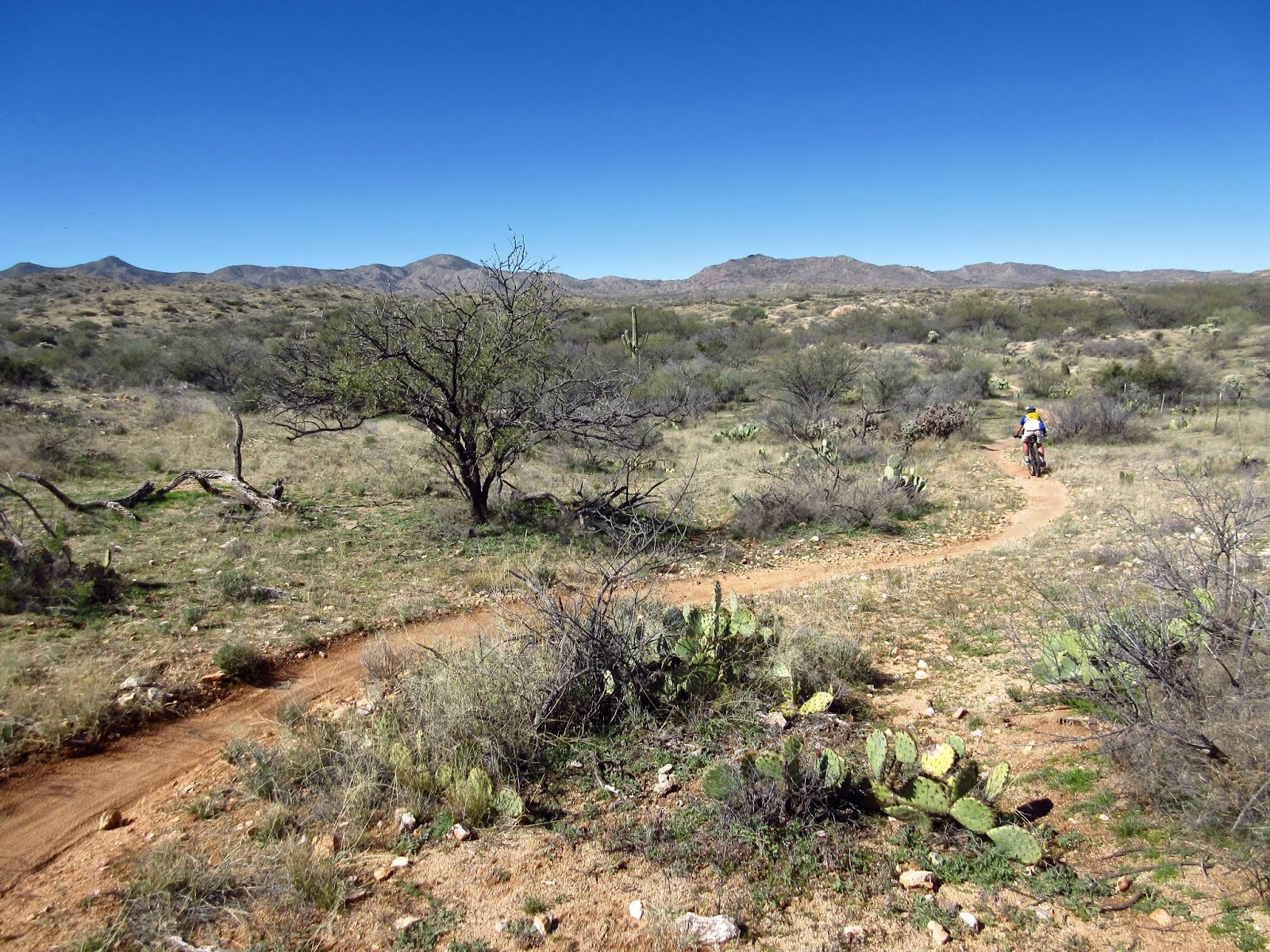 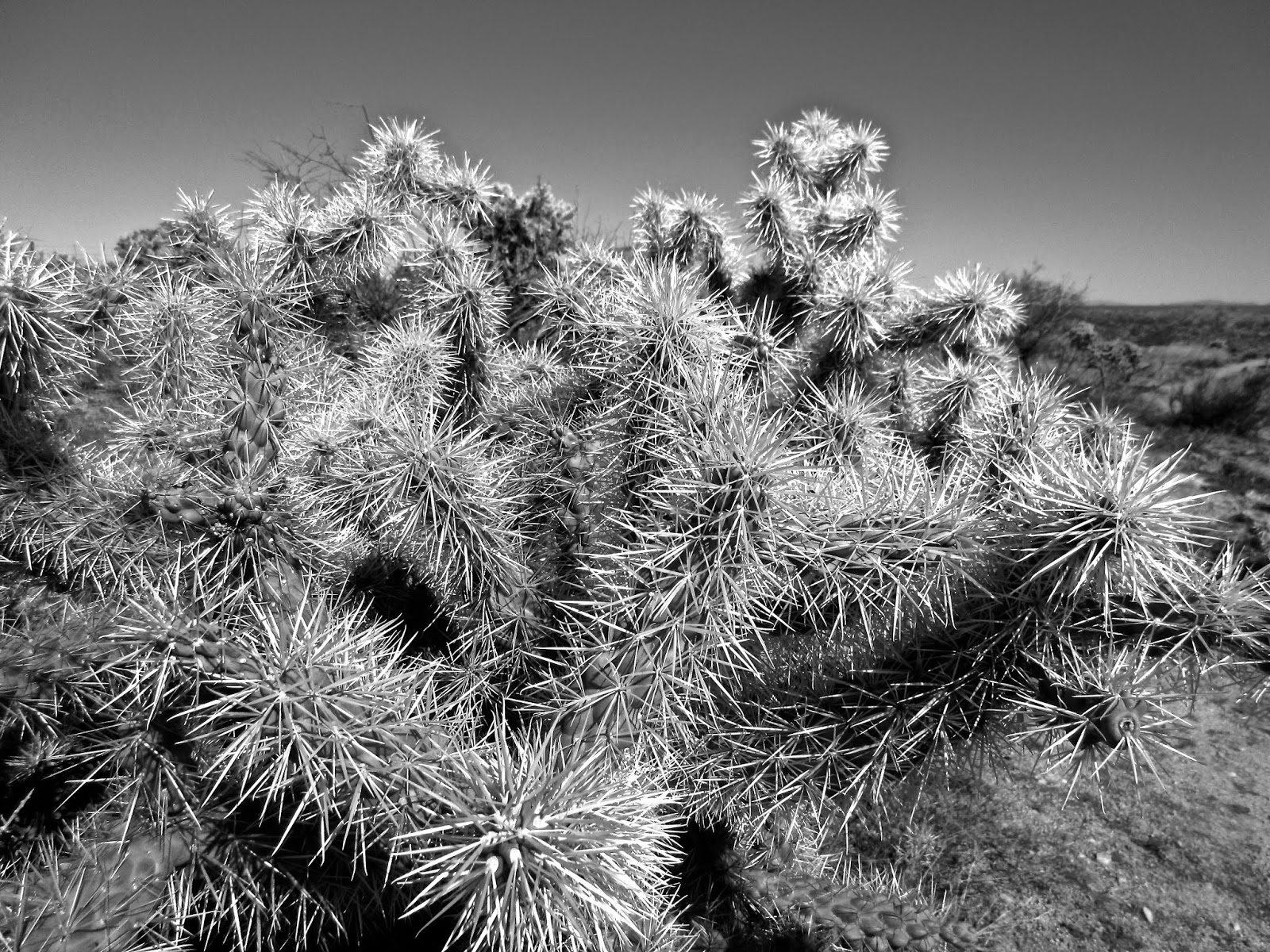 Oddly enough, the first thing to go wrong was not a flat tire but a complete failure of my front disc brake. I noticed noise emanating from the front wheel, but thought it was sand or other debris caught up in the disc brake. I tapped the brake lever repeatedly, trying to free up whatever was making the noise. It didn't. 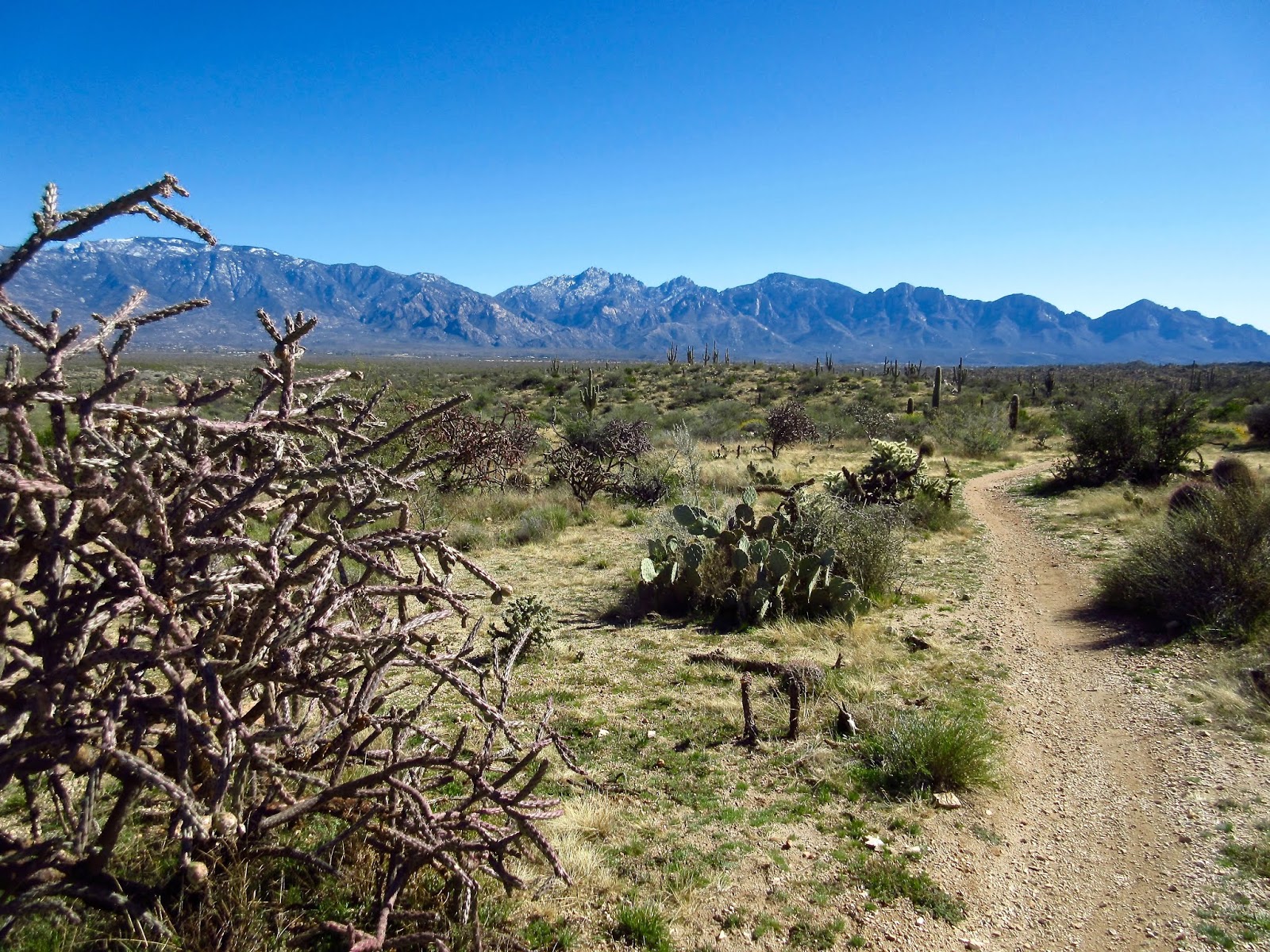 Frustrated, somewhere near the farthest point from civilization, I decided to apply a quick hard grip to the front brake lever...as in lock it up for a split second. This action resulted in a loud "thunk" and a total failure of braking action on the front wheel. Oops. 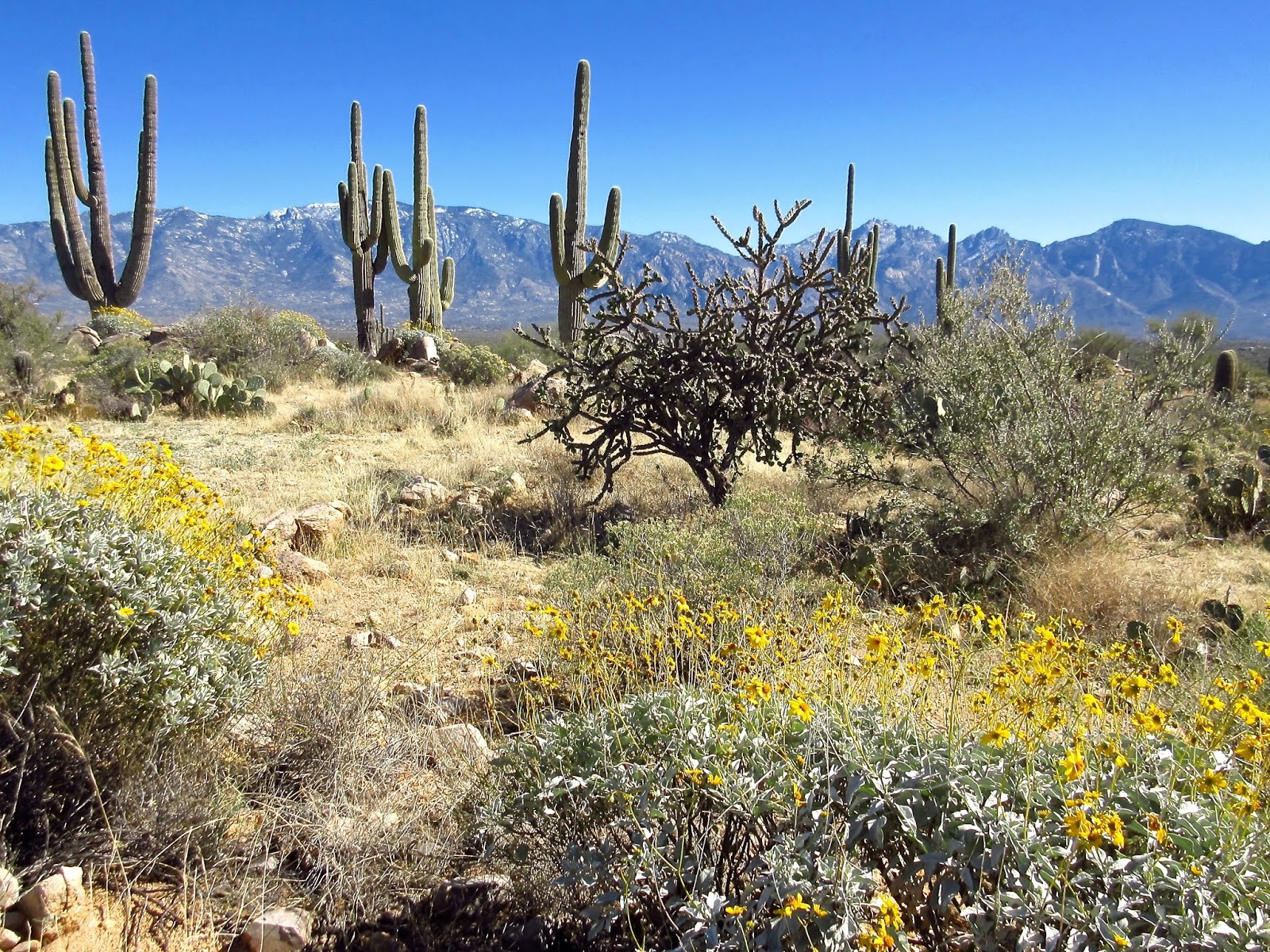 I drug the bike off trail, flipped it upside-down and had a look. 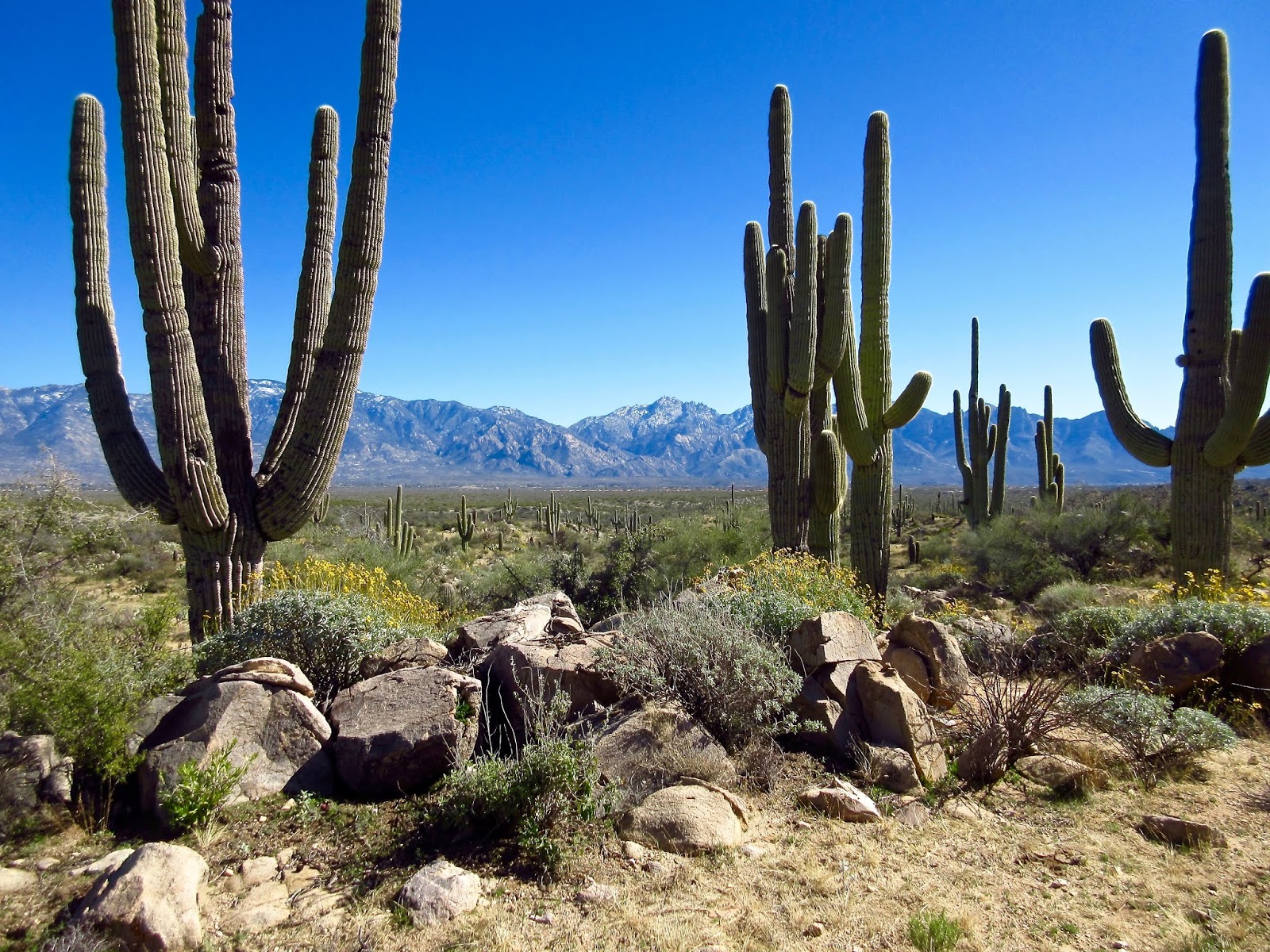 A close inspection revealed some missing components...as in no disc brake pads, including the "set" that held them in place, whatever attached them to the front shock. Wandering back up our trail, Bobbie found a string parts and, one by one, gathered them up. 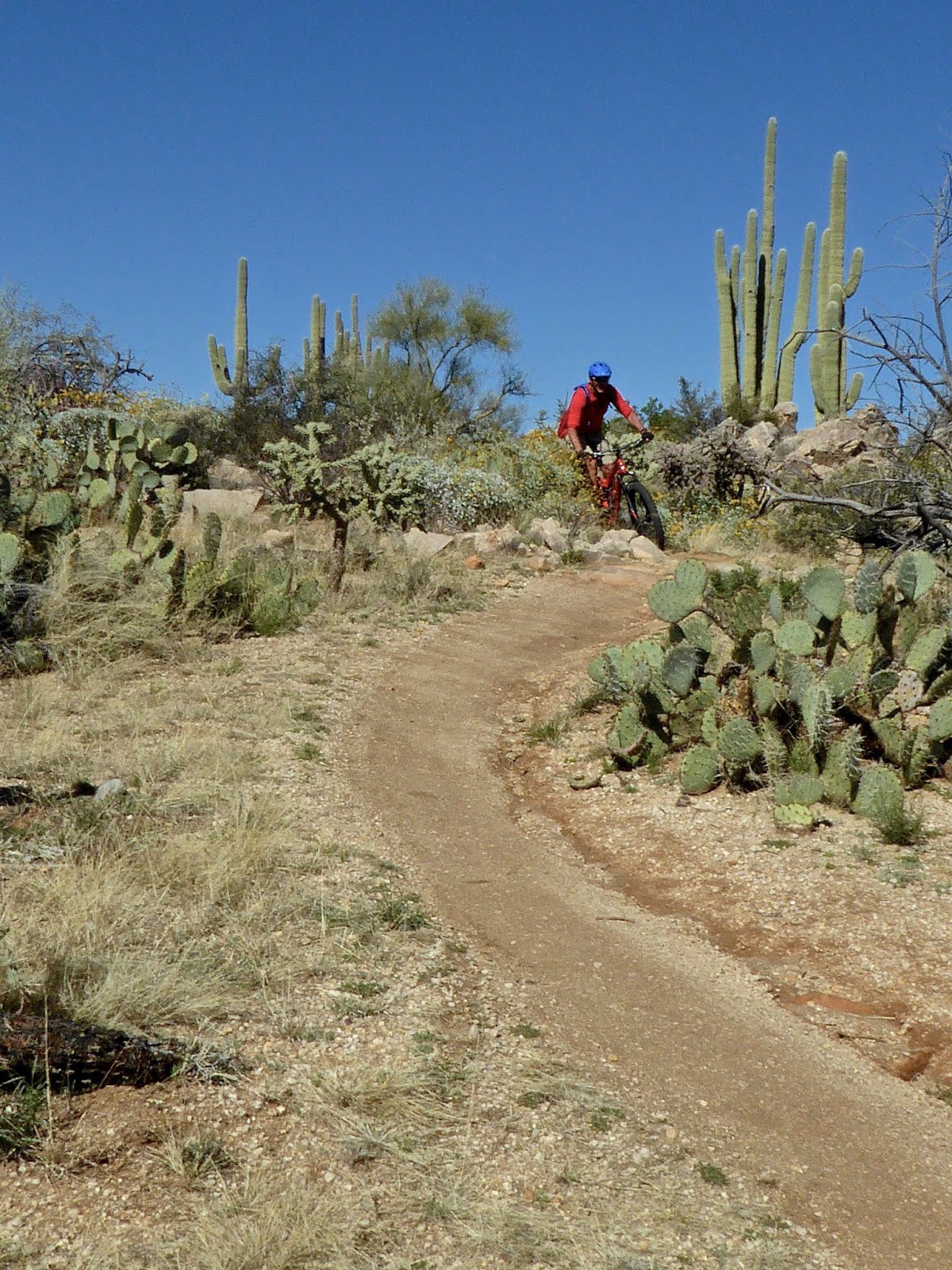 It turns out that a cotter pin had sheered when I slammed the brake. This allowed the brake "set" to fall off the bike. Further examination of the brake pads revealed the source of the noise: no brake pad left! It was brake pad metal against rotor metal. I guess all those trips down "The Monkey" and "Log Hill" had taken their toll. 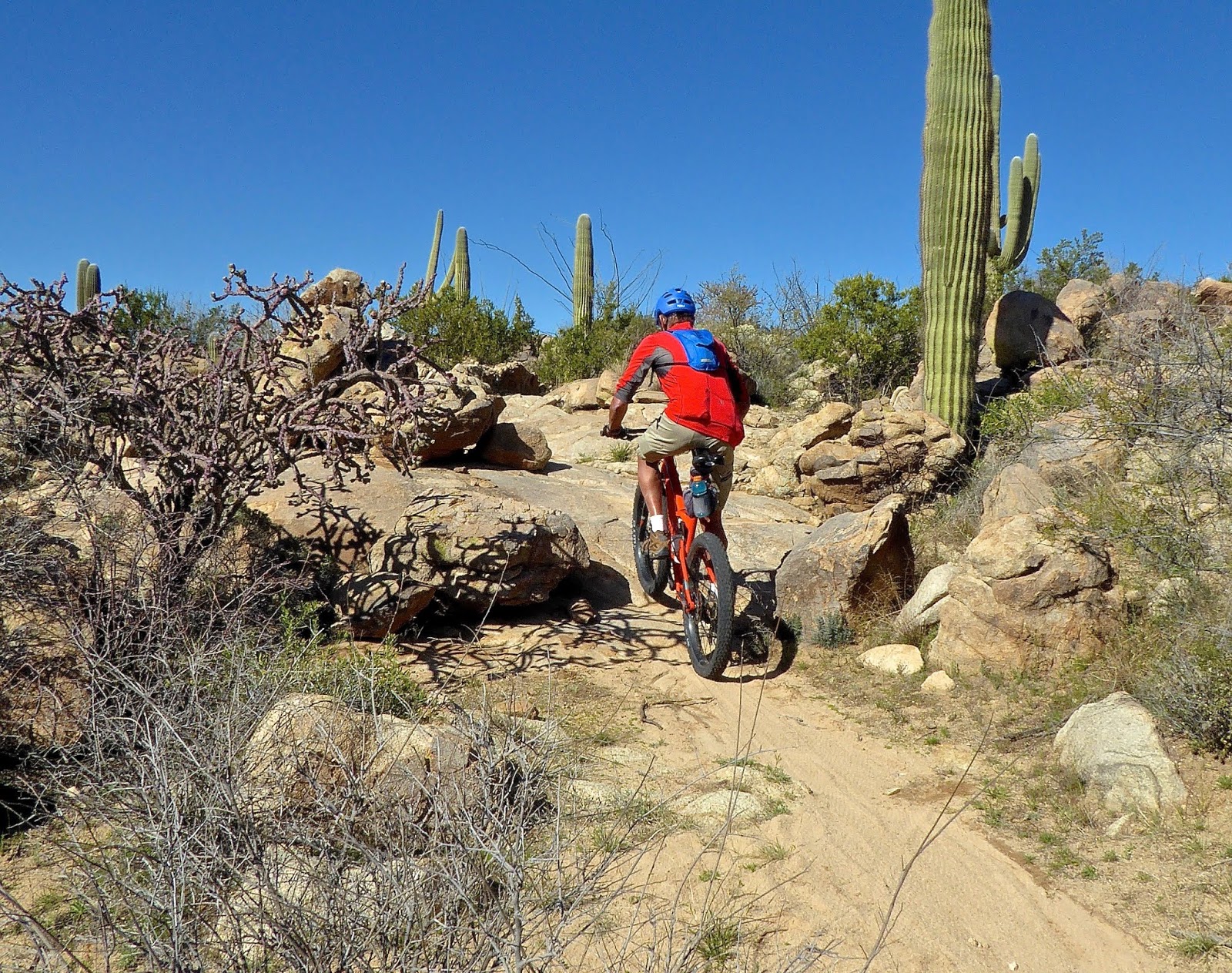 The thing is, front brakes do most of the work going down steep hills. I need them...or else I'd find myself walking the bike every time we dropped into a wash.

Studying the intact rear brake allowed me to figured out how to reassemble all the pieces of the disintegrated front brake....except for the sheered cotter-pin, which was never found and would be useless anyway. I needed wire, but had none! Note to self: always carry bailing wire. 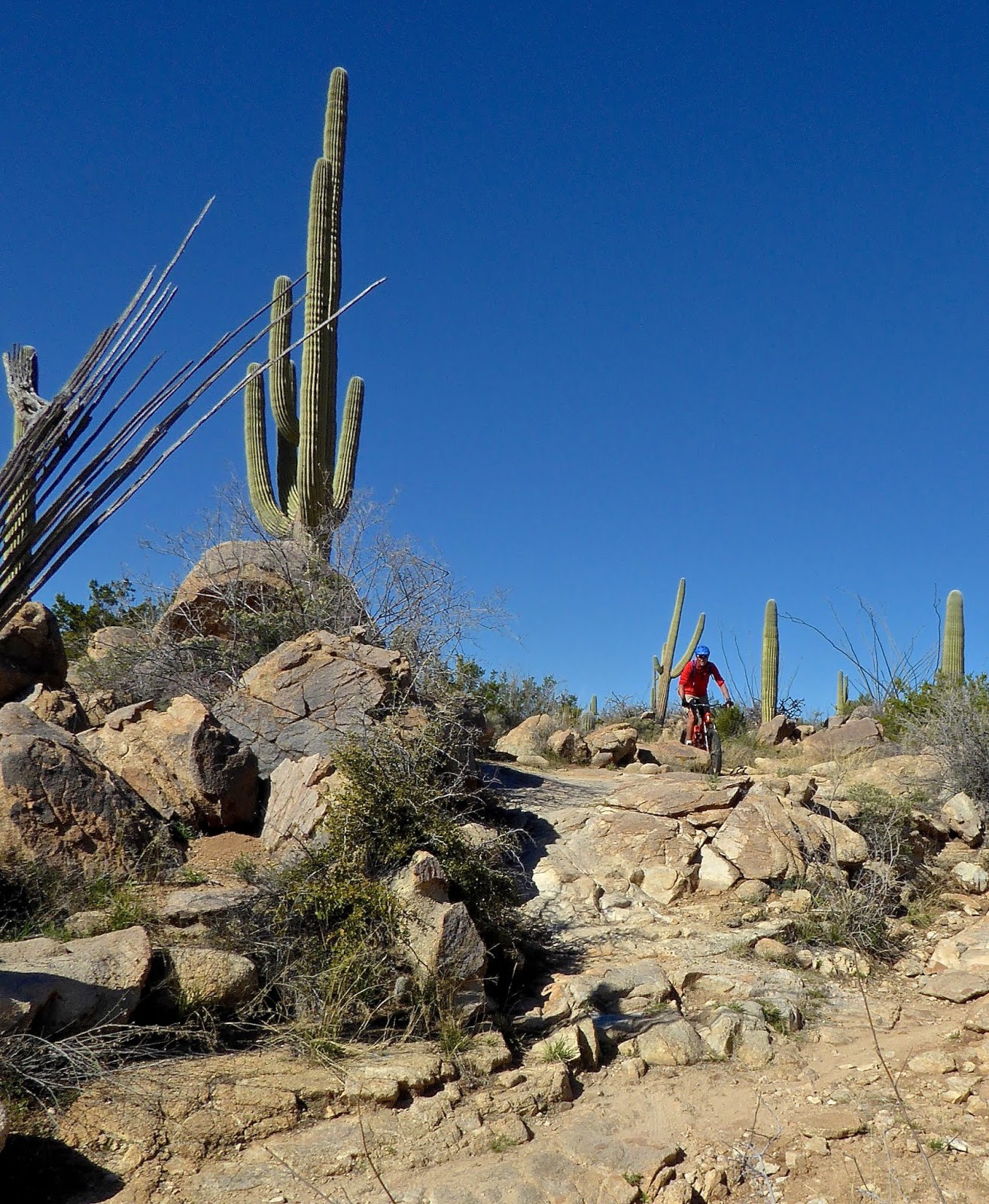 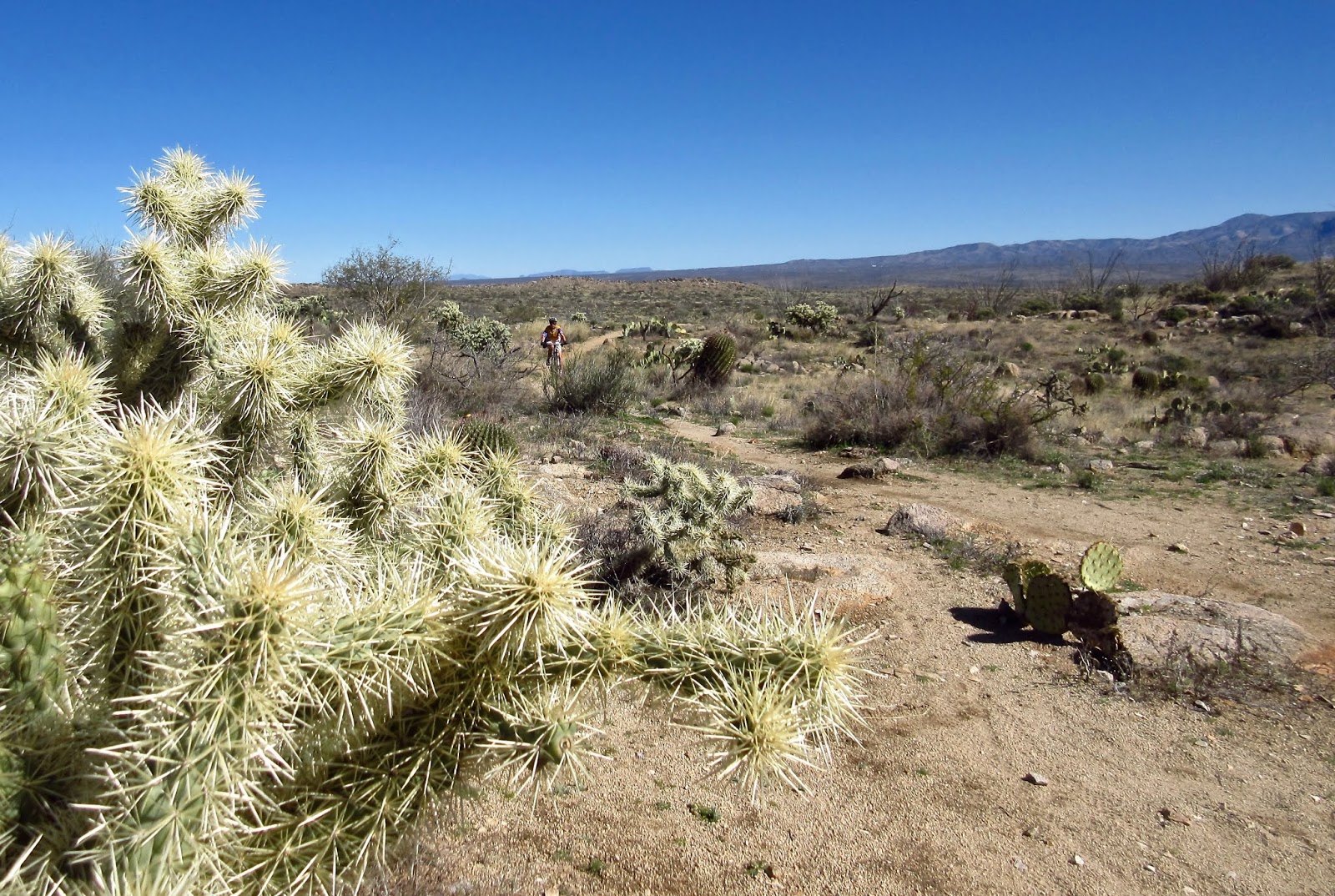 Fortunately, we had been following a barbed wire fence. I sent Bobbie on a scavenger hunt to "borrow" a short piece. It turned out that the wire used to hold the barbed fencing to the stakes was heavy duty hardened shit. Of course we had nothing to cut it and it was much too hard and stiff to bend back and forth till it broke from stress and heat.

Bobbie finally managed to undo the entire piece of fence wire. It was the perfect size to hold the brake caliper in place to the frame. Since the wire was "hardened," I had no worries about it sheering. I wrapped the excess wire around my fork tube and duct taped it in place. Yes, it was back to "metal against metal," but at least I had front brake enough that I could ride the downhill sections instead of walking them. 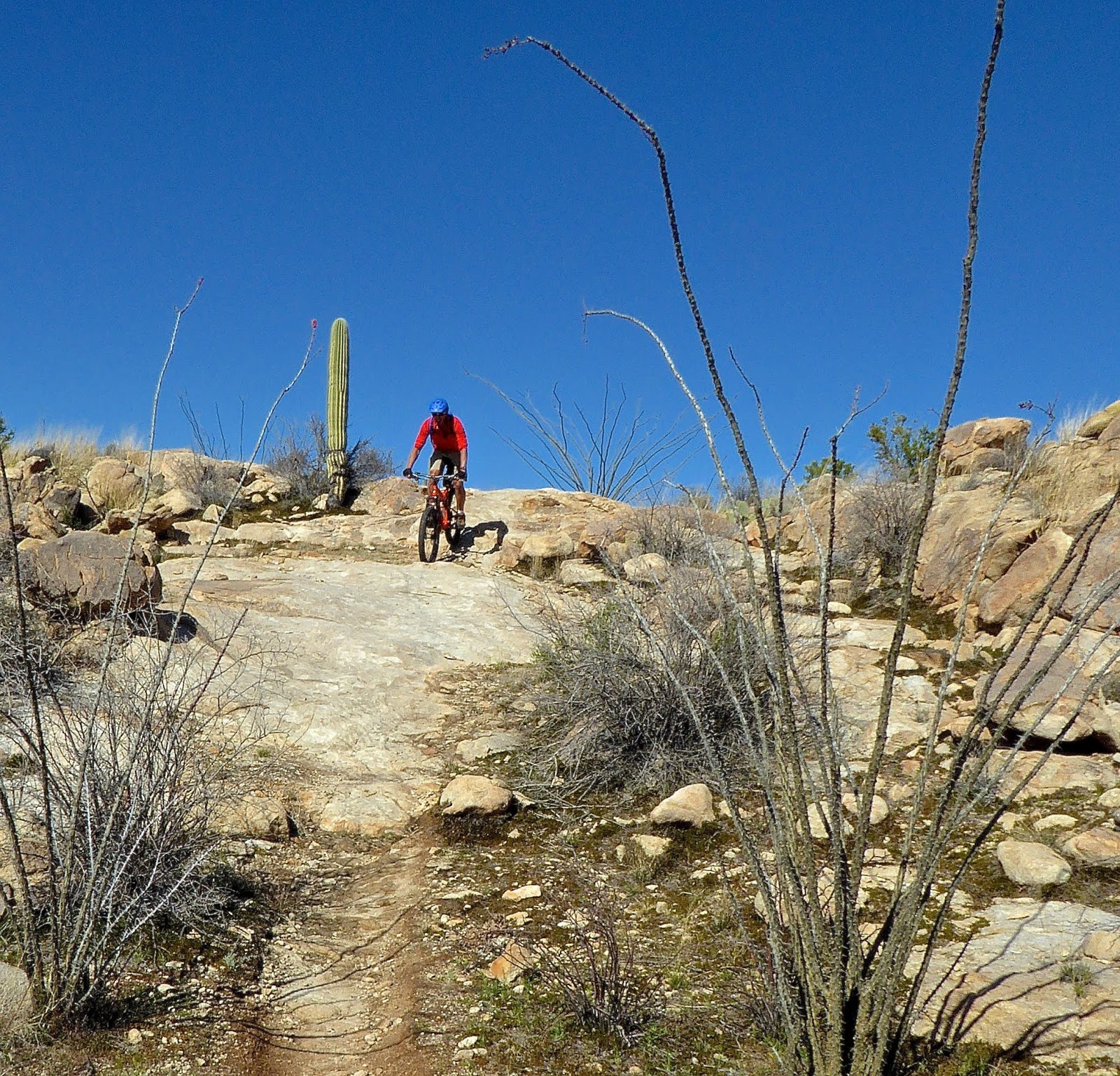 I was feeling pretty smug about our "field repair." The brakes, while screechy, worked just fine. I shoulda stopped and knocked on wood. Funny how bad luck always follows a boast.

We had decided to ride Honeybee counterclockwise this time, something we hadn't done before. The trail looked unfamiliar in places going at it "bass-ackwards."  Long story longer, we zigged when we shoulda zagged and took a wrong turn. After a couple miles, we decided something wasn't right. I pulled up the MTB App on my phone and sure enough, we were off course. Oh well, coulda been worse, right? At least the brake was fixed and I could stop.
Turns out ole "Murphy" wasn't done with us yet...

It is said that good luck is when opportunity meets preparation...bad luck is when lack of preparation meets reality. Though not prepared for the front brake catastrophe, I was prepared for flat tires. After a long twenty-some mile grind up and down a thousand washes and through tumbles of boulders, not two miles from the car, mind you, I finally nailed a piece of cholla with my front tire. Then it nailed me when I tried to pull it out with bare fingers. Damn. Note to self: Always carry needle-nose pliers when biking the desert.

Once again I turned the bike on its back again and pulled the tube. Bobbie ran her fingers on the inside of the tire feeling for thorns while I set to patching my tube. She found three thorns in the tire, but I only found two holes in the tube. Hmmm.

I finally gave up looking for that third hole, put the tire back on the bike and off we went, hoping to hold air for a couple miles.

We were kinda tired, I guess. Neither one of us noticed that we had missed yet another turn. We found ourselves approaching a subdivision. What? Back we go a couple of miles and, somehow, we miss the trail again. I had to use MTB again in order to find our way back to the car.

Surprisingly, we arrived with all tires holding air. I boasted to Bobbie that that third thorn must of not penetrated the tube.
The next morning both our bikes had flat front tires.

Guess I'll drop some bucks at the bike shop on brakes, slime tubes and maybe a handlebar mounted GPS. Seems my "natural intuition" for direction is AWOL.