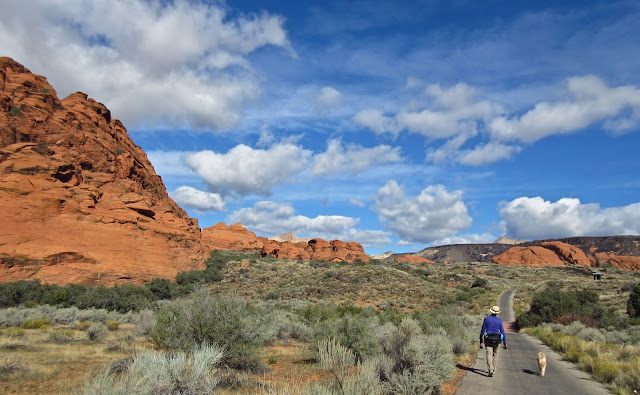 In the distant west, Pine Mountain lay hidden under a mantle of clouds, clinging remnants of a one day storm that gave abused feet and legs a day off from work, er, "play."

It was mostly sunny otherwise, excepting a few renegade billows that managed to brake free from Pine Mountain's cloud coral. Temps were on the crisp side, too cold by most full-time Rver's standards (anything less than 60 degrees). I took pity and emailed a few options for hiking near Saint George, always a few degrees warmer. We chose photogenic Snow Canyon; mounds of red petrified sand bleeding out under impossible blue sky. 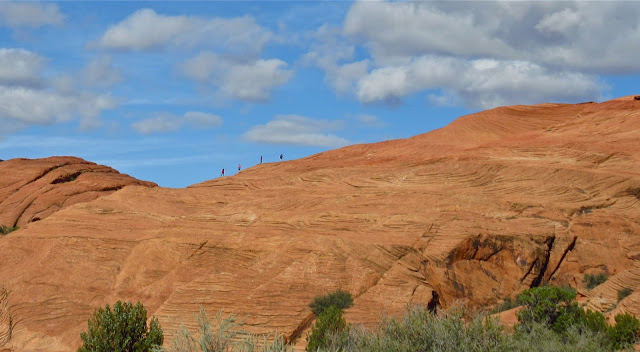 Laurelee and Libby accompanied fellow gangsters Chris, Suzanne, Bobbie and your's truly to the end of Snow Canyon's paved bike path, a little over three miles. Dogs are not allowed to go cross country so we parted ways with L L and Libby in order to fully explore Snow Canyon's surreal landscapes. 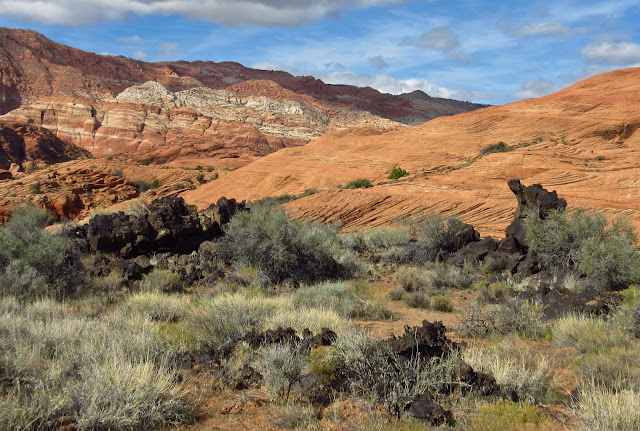 The juxtaposition of colors, coal black lava rock against orange, red, and white sandstone… the soft green of sand sage, the harsh green of piñon, it defies a layman's vocabulary. Even photos struggle to convey the supernatural reality. Those who have not laid eyes on Snow Canyon will claim I'm playing fast and loose with "Saturation." Those who have been there know better. 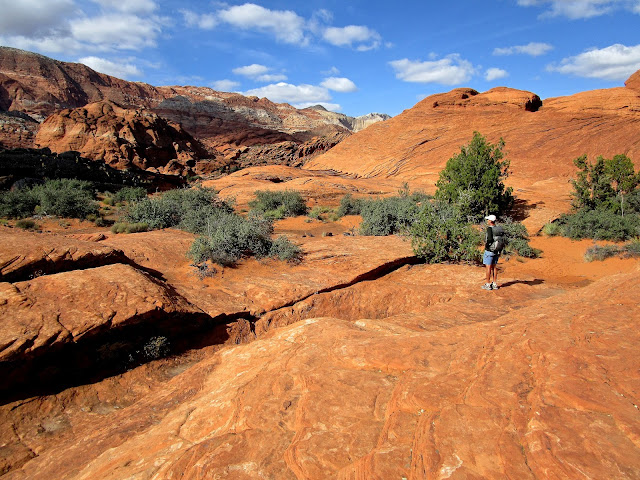 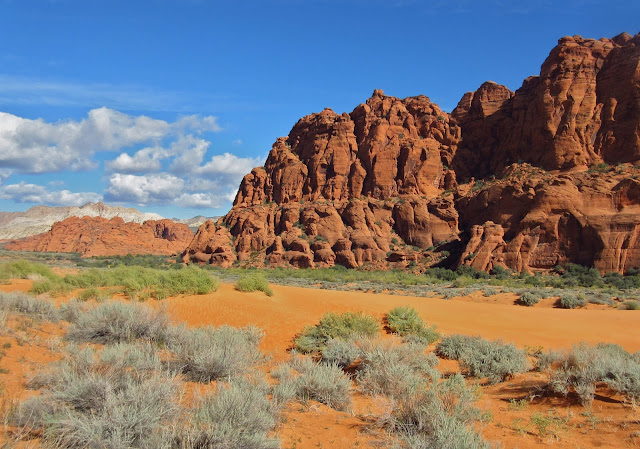 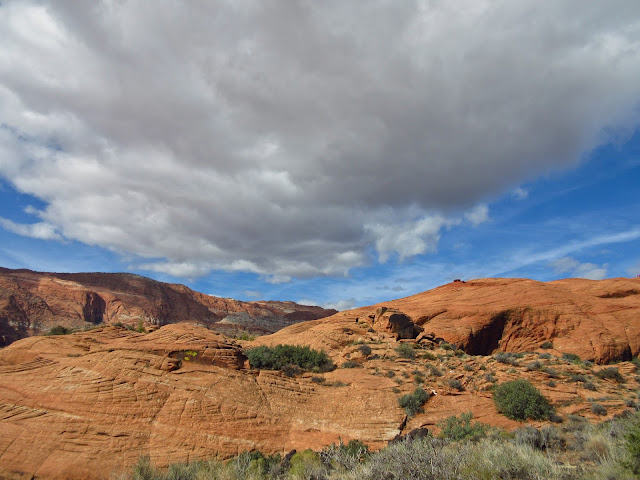 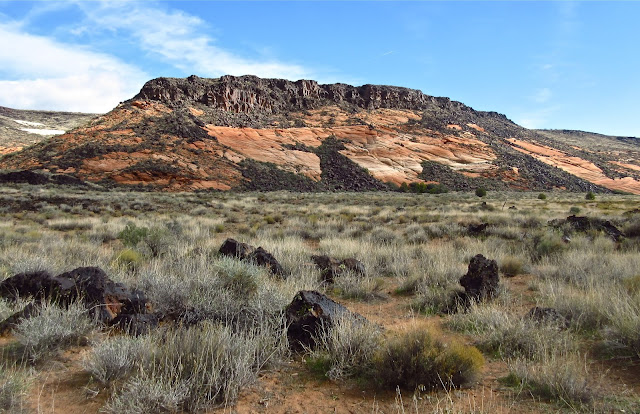 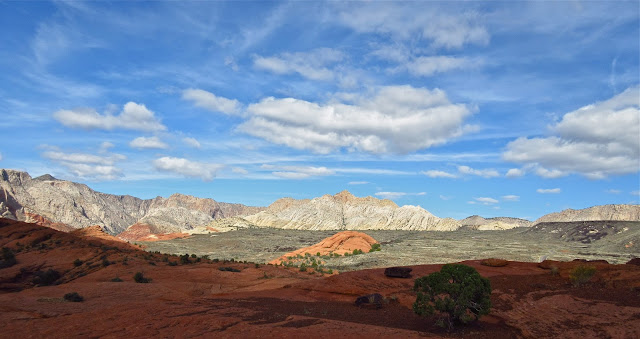 We got a little giddy—drunk on sensory overload if you will—regressing to childhood and running amok on the playground. It took three attempts to coordinate the "hear, see, and speak no evil" photo below. Now I can't recall why it seemed important. Kids will be kids. 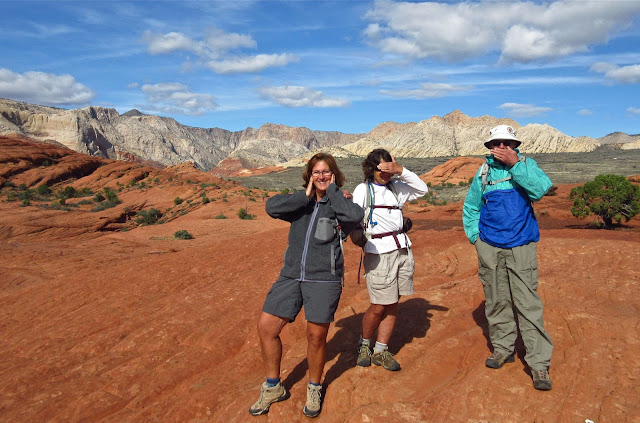 We rambled and scrambled, climbed and descended, jumped and fell. Bobbie was bleeding… what else is new :) 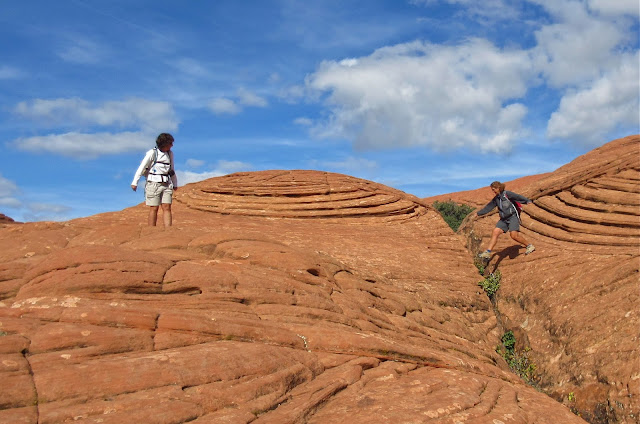 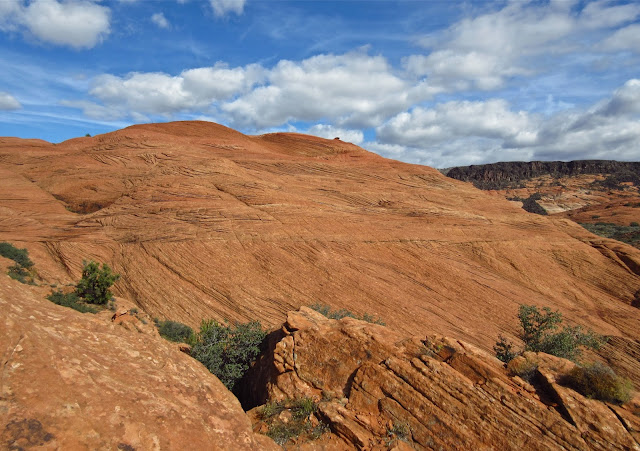 The mind is a funny thing, always sorting and filing, trying to reduce "input" to common denominators and balance equations. Brains seek to make order out of chaos, and find symmetry in disunion. It needs to compartmentalize in order to keep track of everything we feed it, from bank balances to a quadrillion bits of minutia, processing A to Z, 1 to infinity. Add to this alphanumerical reality all the inexact and infinite "shades of gray" that comes with sensory input and, well, it's just an amazing computer. It categorizes files based on similarities, finds the proper drawer into which to shove them based on alphabetical, numerical, date, place, and so on, all for future recall. Even though we weren't moving all that much or exerting, our brains were working overtime, trying to process all the beautiful chaos. We discussed taking a little solar nap to "reboot."

The Gang decided to wander in a westerly fashion, maybe catch West Canyon Road back to Whiptail Trail which led back to the car. But then we noticed on our map a less direct route, through Padre Canyon, a place we had yet to explore. As Rver's you are no doubt familiar with J. R. Tolkien's, "Not all who wander are lost." Well, somehow we seem to always end up being the exception. Here we go again… 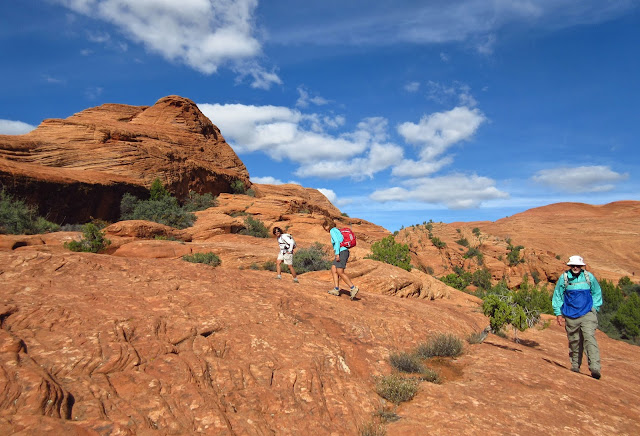 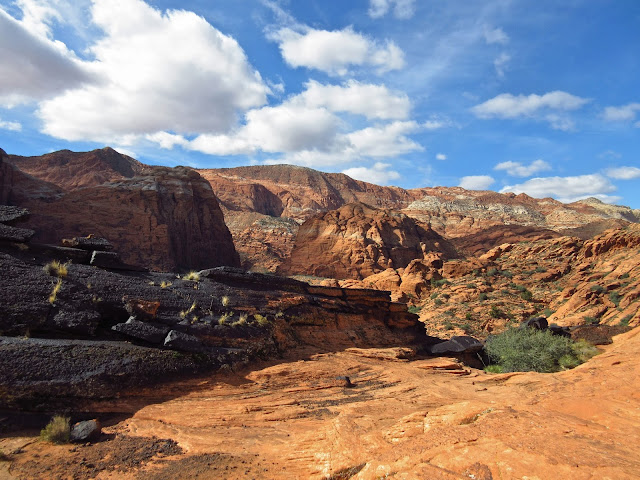 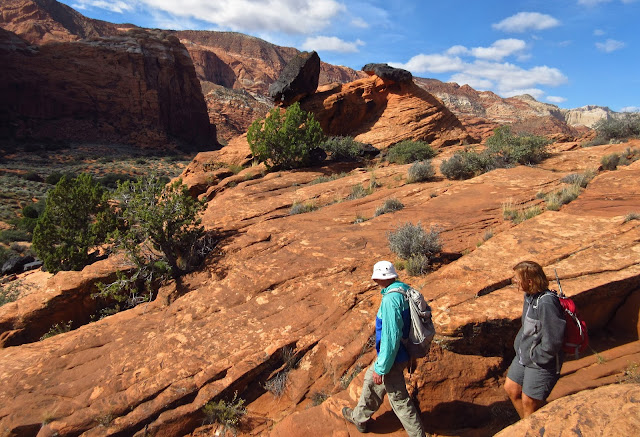 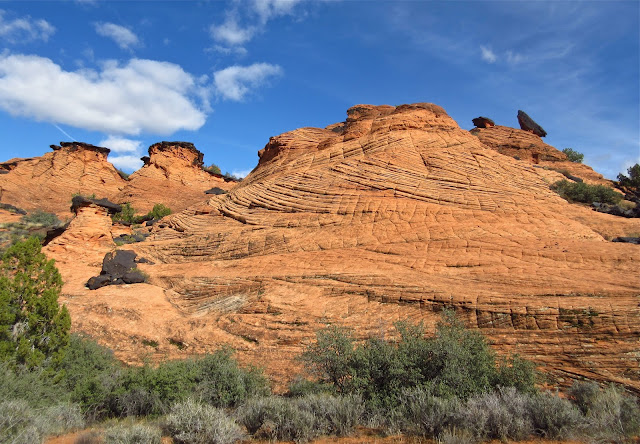 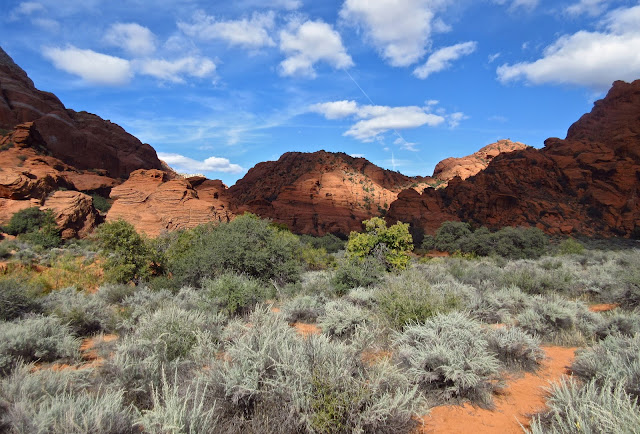 Certainly a red beach sand-slog to get to Padre Canyon, but as you can see in the above photo, quite inviting. Signage was AWOL, but from the map it appeared we needed to hang a left once in the canyon proper, then simply hike south. Piece of cake. We tried to follow footprints from previous hikers but they were as confused as we were… some staying in the wash, others bailing out to weave through abundant sand sage. 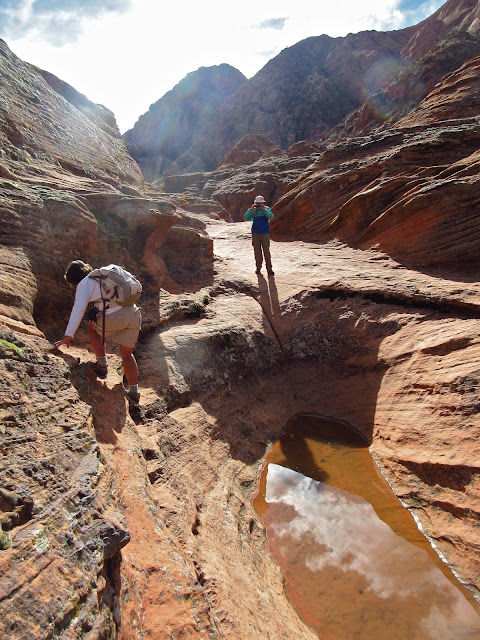 The canyon seemed to break apart in places… separations in route that made it difficult to decide which way to go. We decided to take the path of least resistance and the least amount of water. Once we hit sandstone, finding footprints was more art than science. But we were committed, sucked into a vortex of beauty, a nice mix of delight and challenge. But increasingly, a rope would have come in handy. FYI… 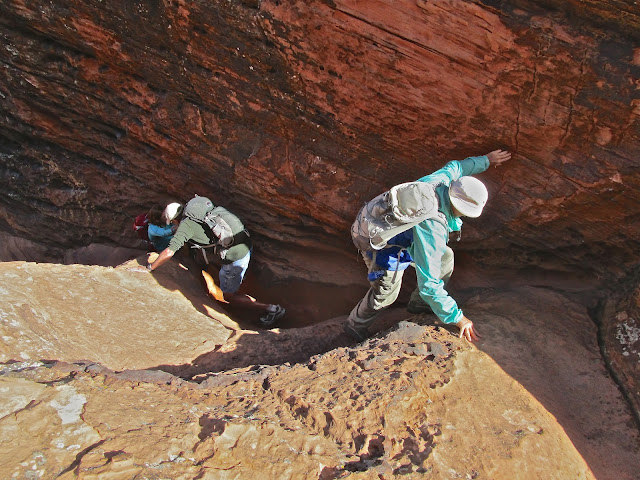 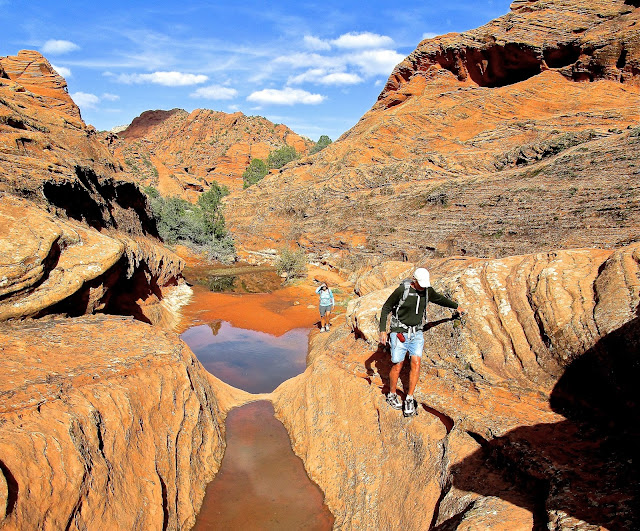 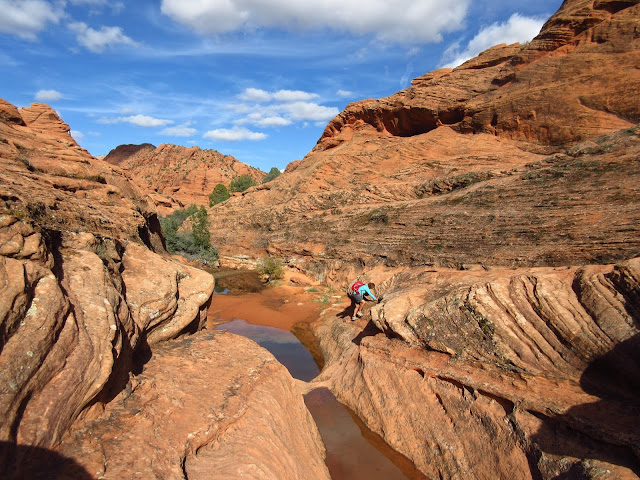 Shadows grew long as we inched our way up canyon, always choosing the path of least resistance, only to end up with vertical challenges. We had zigged left a ways back to avoid a waist deep pool of water. Footprints in sand from there on were no longer fresh, and finally just petered out.

It was growing late. Not wanting to backtrack we pushed on in spite of the obvious… we were in the wrong freaking canyon. By the looks of it though, I thought it might be possible to eventually—if we just could keep overcoming obstacles—regain the correct canyon by finding a route over the separating ridge… a wall that loomed ominous and defeating. 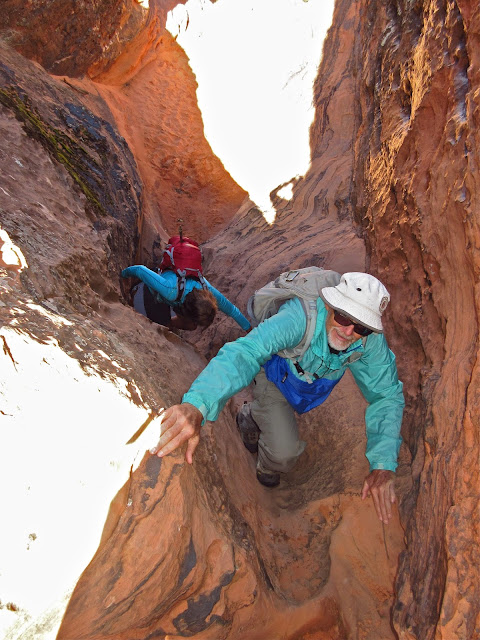 Our side canyon became a tad anorexic, a skinny shimmy, not to mention difficult and moody. Time to go for the ridge and look for another way out of this mess Chris got us into :).

I did a solo recon while the gangsters waited. It took a while to gain the ridge; I had a few backtracks due to being "cliffed out." I struck gold on top, however. There was a nice trail… the correct trail, I believed, well traveled with fresh footprints. A mile or so up-canyon was a saddle, which I assumed was the "escape hatch."

But what if we got all the way up to the saddle only to be cliffed out on the way down? We had no ropes and it was getting late. Was a backtrack out to Snow Canyon in our future? Ugh. I hate backtracking, defeated by some impasse that stands between success and failure. Note to self: Next time, bring rope! 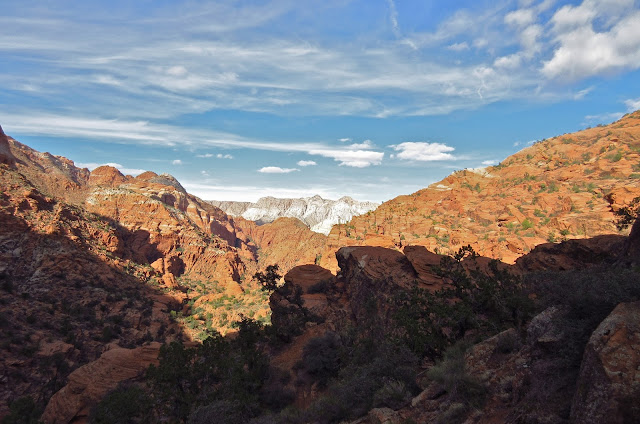 Waiting on the rest of the team to scramble up and out, I took in the silence and rawness of Padre Canyon…  finally behind us. I breathed a prayer that we could find a route through the saddle and down the other side.

What an amazing and sublime place. From my higher vantage point I could see how easy it would be to get off track; there were sub-canyons within the main canyon.

Then, I heard voices. Must be the gang. Then again, coming from the saddle. Yes, a group of people, coming from the other direction… through the saddle. Shadows had long overtaken our surround. I strained, trying to see if anyone in the group was carrying ropes. They inched closer; it grew darker; I couldn't tell. I shouted encouragement to my scrambling teammates, You are doing great!
What?
Never mind…

Finally I could make out the group coming at me… a group of 5 girls, no ropes! YES! 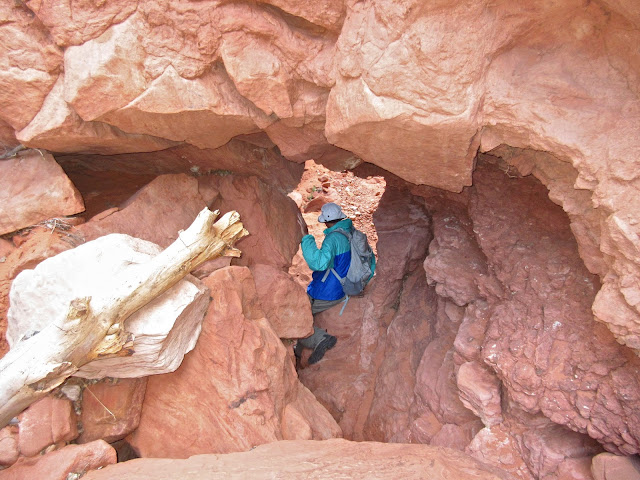 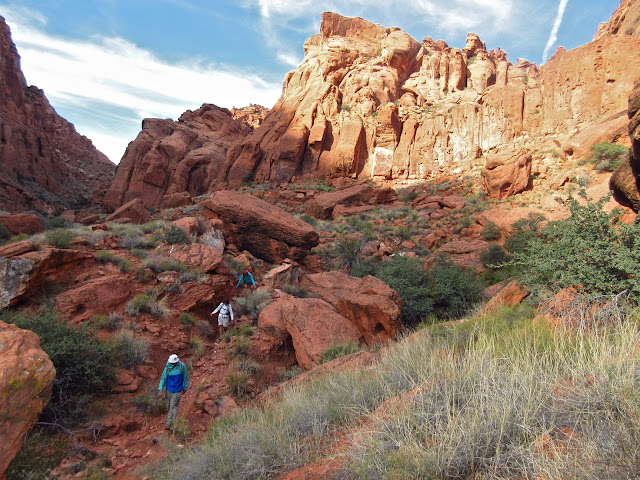 We came out at Tuachan, a performing arts High School nestled in the mouth of Padre Canyon. The trail skirted around the school's east side, up and down, up and down. We longed for level pavement… just a stone's throw away. But that route would add miles. Finally we broke out of the canyon's shadow into the red desert glow of a setting sun. The last mile was the hardest, the longest… as it should be.

We came. We  conquered. Another great adventure where the outcome hung in the balance… somewhere between doubt and faith. I know, it wasn't Everest. But it sure felt like it. We took a measure of risk, and reaped a small reward.
Life is good.
Onward... 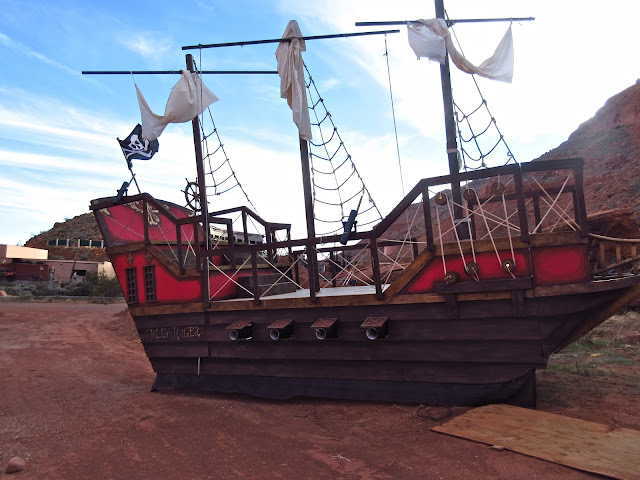 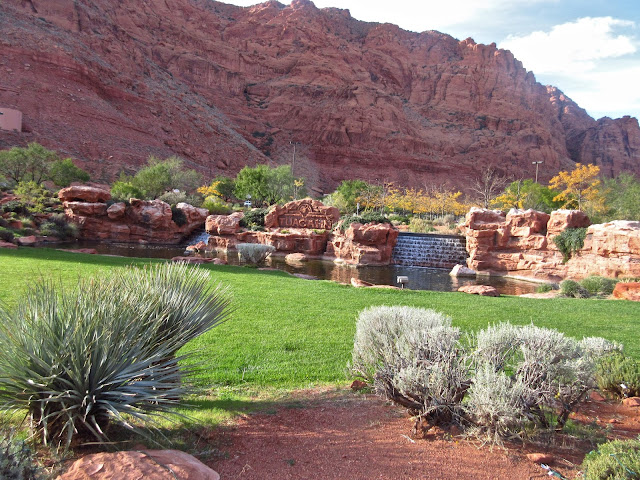 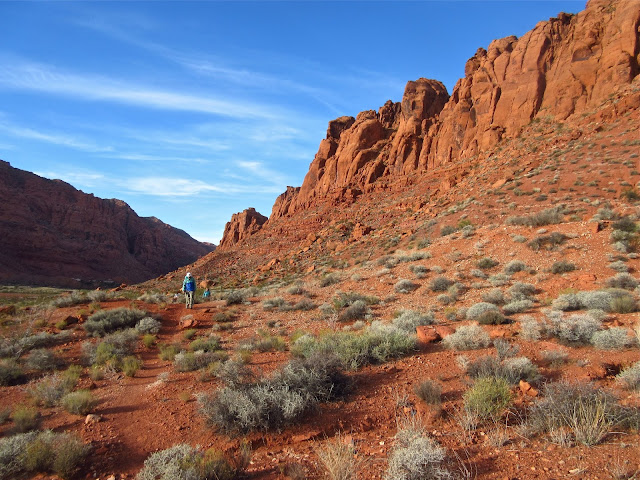