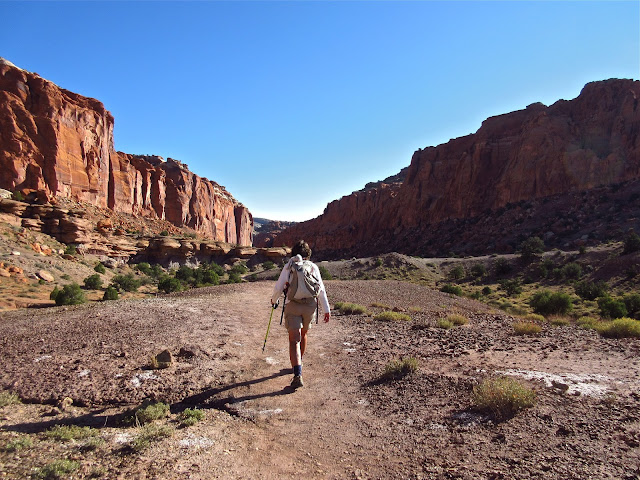 It's amazing how much disagreement exists amongst so called "authorities" when it comes to such an important number. Why, sometimes I wonder if the National Park Service leaves it to tenured Desk Jockeys to come up with the "official mileage" for hikes within Govies' inner sanctums. They drag out a topo map, look at the "one inch equals a mile" scale, then use nicotine stained fingers instead of their legs to come up with total distance. Take the Spring Creek hike in Capitol Reef, for example…

Recall that last year the Gang tried to hike the entirety of Spring Canyon by splitting it into two hikes, doing the upper portion first, all the way to the supposedly "dangerous snag" where acrophobs might want to use a rope and not to look down, then the lower portion which requires wading the Fremont River.


The official NPS Desk Jockey pegged the entire hike at 10.0 miles. However, based on last year's GPS and phone odometer readings and the number of blisters on my feet, it added up to a minimum distance of 13 miles. The "truth" lies somewhere in between. 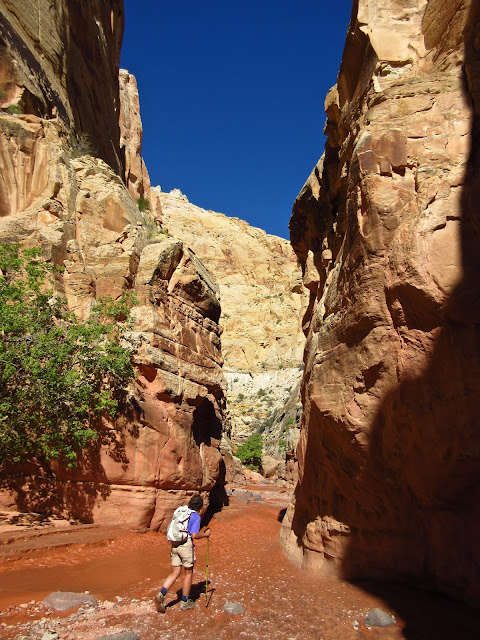 Last year, after hiking Upper Spring Creek downstream to what we thought was the midpoint, we decided to complete the canyon by hiking from the river crossing up until we reached the same turnaround. It was fun fording the Fremont, but it seemed to take forever for everyone to get back into dry socks an hiking shoes. The canyon started abruptly. Colorful walls rose up and seemingly scraping Utah's trademark cobalt sky. Tears of desert varnish streamed down, revealing contour and majesty. We pushed on and on and on, seven plus miles according to "devices," never reaching our goal of reaching familiar ground. It was hard to turn back short of completion. While the rest of us took a lunch break, Jim and Gayle scrambled deeper, trying to find where we left off, knowing it had to be close. Gotta be just around the next bend, right? Wrong.


Hiking Spring Canyon was a journey through random disorder, which is nice way of saying "chaos." It's one of those Utah places where gargantuan slabs of solid sandstone find themselves resting on top of softer crumble-pie… those thick layers rife with solidified muck. Over time—eons, which we can't even begin to fathom because there is no adequate reference beyond the tired old yardstick where human life is represented by a particle of dust—a trickle of water carved a little groove that grew up to be vast canyon. 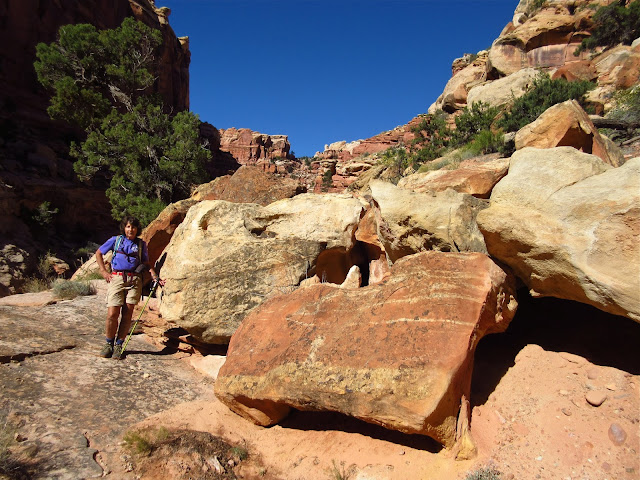 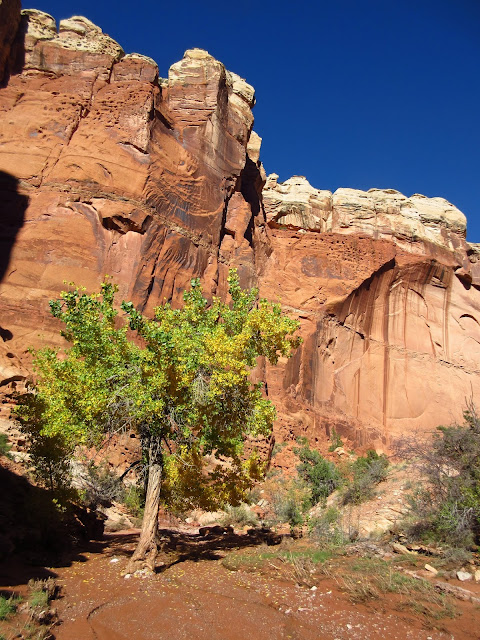 As curious beings, humans like to explore such places. From bronzed and brazen Native Americans to explorers like John Wesley Powell, who with only one arm navigated the mighty Green and tumultuous Colorado rivers in leaky dories and climbed canyon walls to the tip-tops just for the fun and view of it, to nowaday computer drones with a longing to stare at something more meaningful than their display screen pixels. These canyons offer a time capsule glimpse of geology hundreds of years in the making. Yeah, "meaningful." 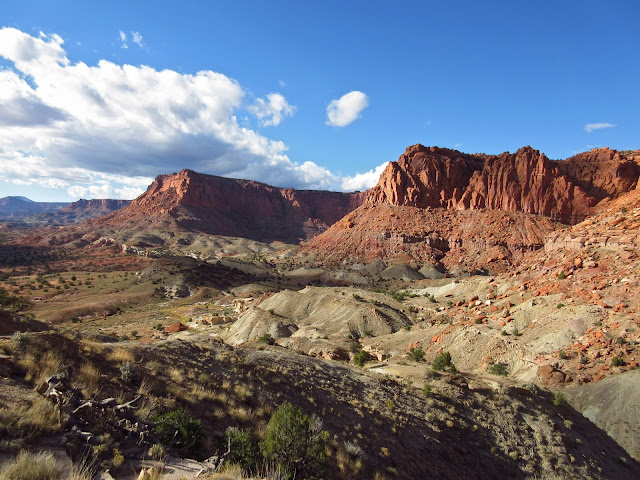 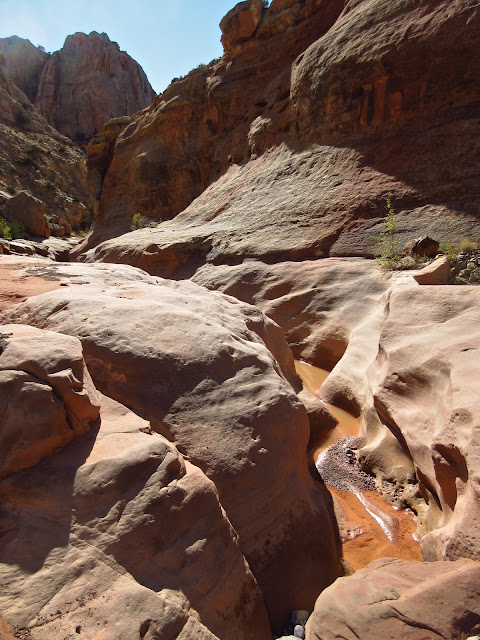 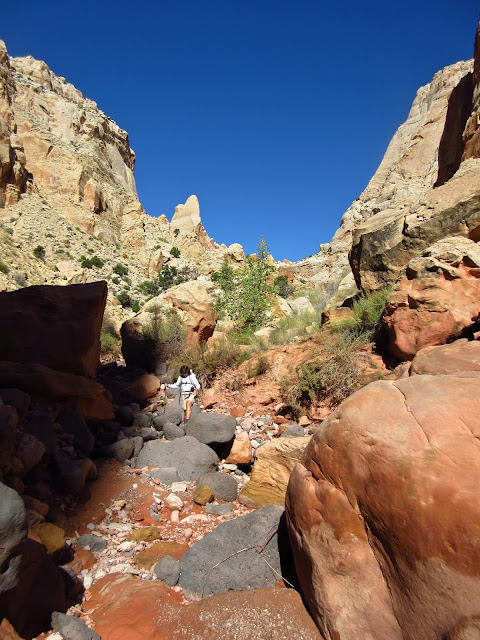 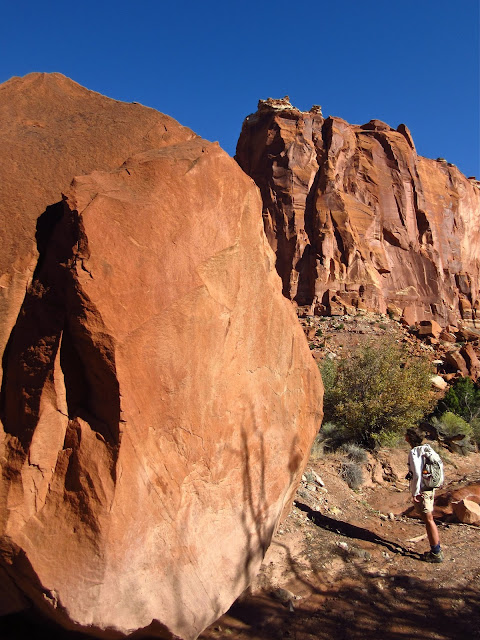 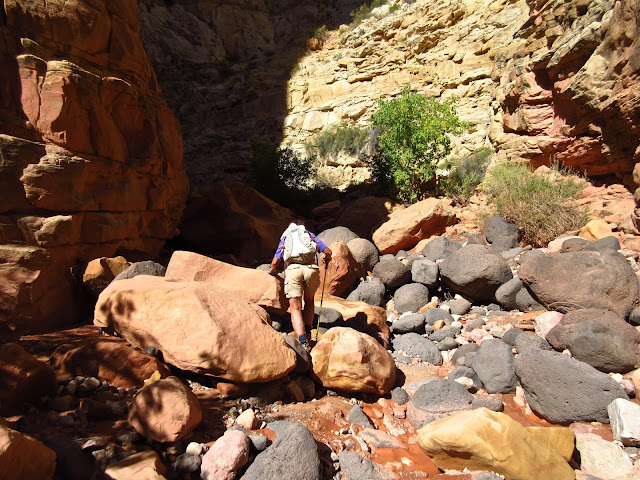 Bobbie gives scale to boulders that litter Spring Canyon's floor. They fell at one time or another from cliffs that towered over us like unscalable prison yard fences. Like forests, it begs the question: If a boulder falls in a canyon and no one is around to hear it, does it make a sound? 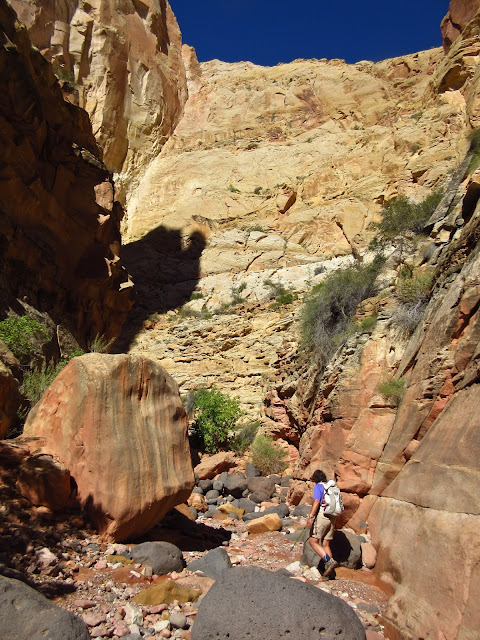 In today's over-regimented world, Spring Canyon's chaos is relief for sore eyes. We scrambled over boulders, one after another. It felt soothing… embracing the rough weathered skin of such massive relics from primordial times, absorbing the release of its stores of coolness, catching the aromatic scent of Mother Earth as she exhales right under our nose.

The effort of overcoming endless chokeholds of choke-stones, one after another, robbed our knees of patches of skin. We suffered in the sun, only to be chilled in the shade…  completely alone. There was evidence that other's had fought the same fight, silly Neanderthals, trying to make up for what's missing in their boring suburban lives. 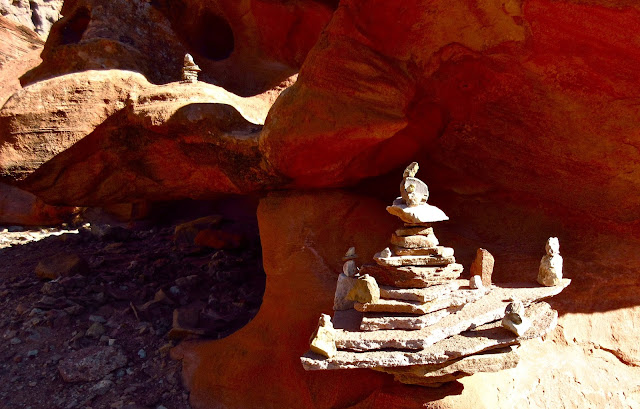 Does that irk you, when I pee on modern life without Nature and Movement? Some it will irk, some it will motivate. My hope is the latter, but my sermons oft fall short of the glory of God. 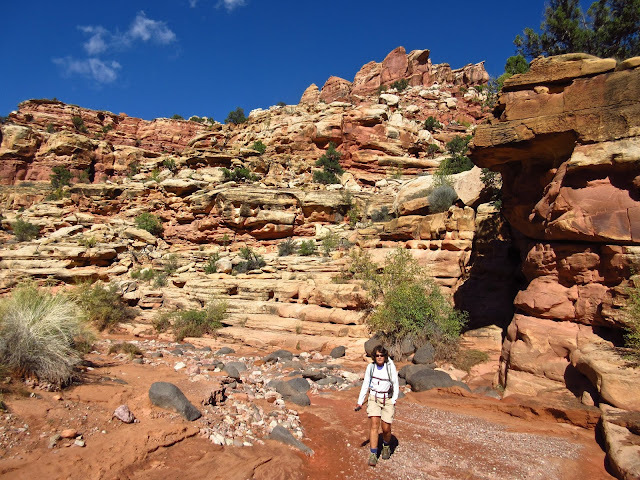 After what felt like 6 miles of bouldering, but was in reality only 4, we reached the familiar slot canyon near the end of last year's upper canyon hike. 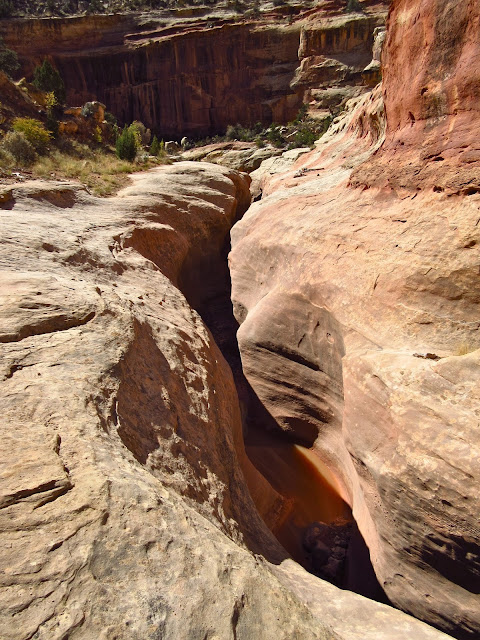 Just beyond, we entered "The Gap," that irritating zone left unexplored from last year. What if it was just a few hundred feet? What if we all but had it in our grubby little hands but let it slip away like so much red sand… all for the lack of one final "damn the torpedoes" push?

Ah, but it wasn't to be... thank God or unfortunately, take your pick.  An additional mile of scrambling and bouldering was required to fill "The Gap." For a while I feared the Nation Park Service had lost its freaking collective mind! How dare the Desk Jockeys mislead tired legs and frazzled nerves with unreliable guesswork! The day wore on. Shadows shank, swapped sides, and regrew as the sun made its way from rise to set. 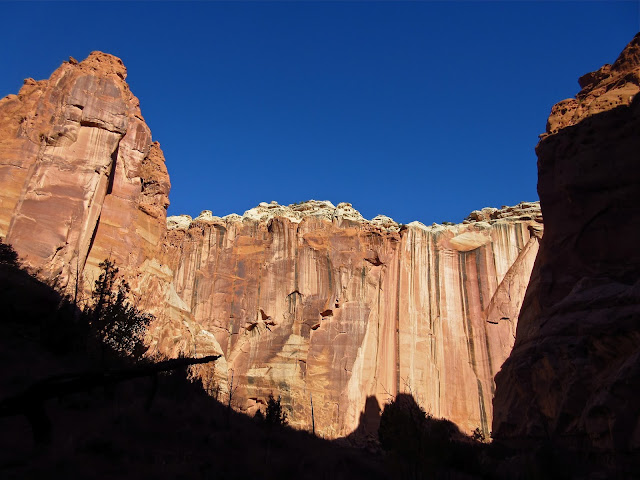 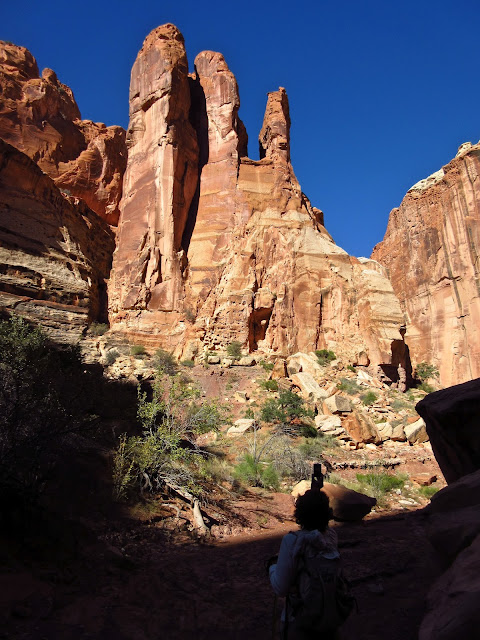 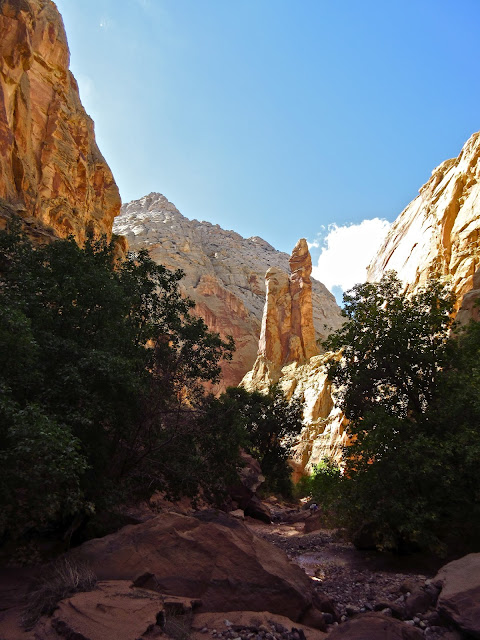 In all their Viagric glory, "Ta da" "Greater and Lesser," a sight for sore eyes and knees. Finally, we had closed "The Gap" in Spring Canyon. 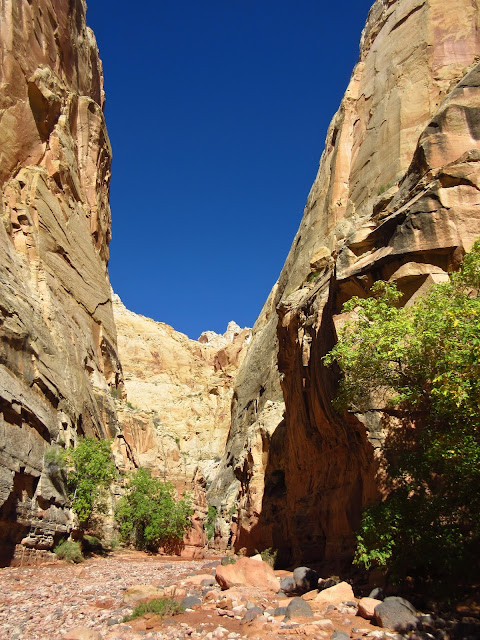 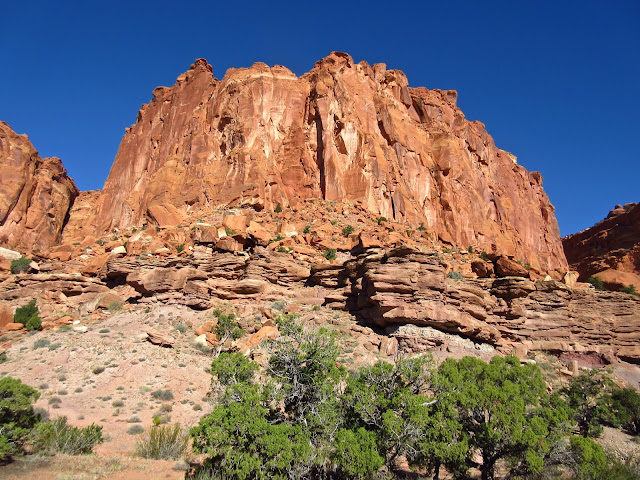 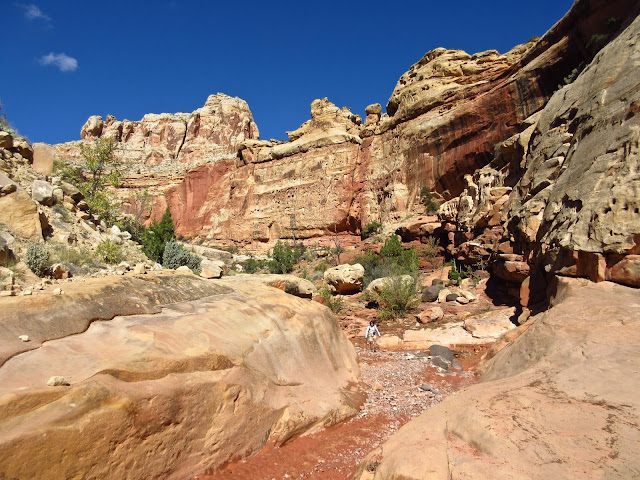 I don't know, It felt like 6 miles one way. It's hard to measure time and distance in canyons… unless you are a geologist.