Exploring Our Ordinary Backyard...Who's Converting Who? 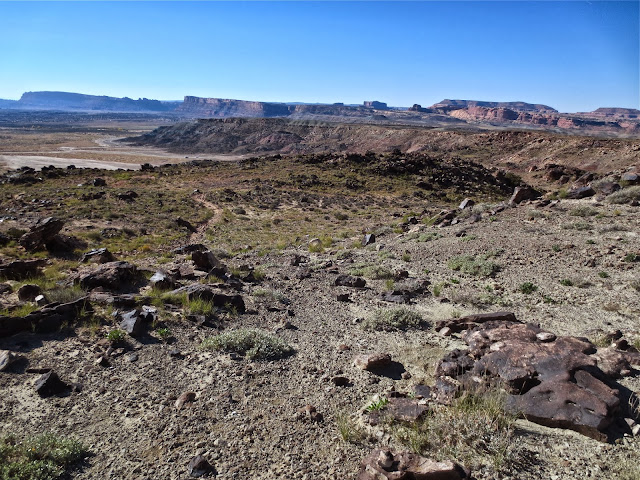 At first glance, our camp might appear desolate to an "untrained" eye. So every day I'm in a rush to ride or hike off toward "The Pretties" of Arche's hoo doos and slick rock, you know...Postcards.

You must know by now that I'm boondocked with the Antichrist of "scenery" and all things "mainstream." My daddy was a preacher man and I am my daddy's son; this was supposed to be a mission of conversion, a last ditch attempt to salvage one lost soul from hell's fire and brimstone. He sits in the back pew, looking, listening—going along for the "ride," but not accepting, not believing...a genuine "Doubting Thomas," heart hardened as the red stone upon which we ride.

I babble on about the glory of Arches, that it is a veritable Disneyland of recreational opportunity...its streets all swept and washed and lined with eye-candy stores with anthropomorphized statuettes of Mad Hatters and Flintstones-like characters.

On a low energy day the Unconverted One took us on a hike to the desolate mountains that surround our desolate camp...pointing out the subtle joy and beauty to be found on wind swept barren ridge lines of scrub brush and parched soil. He spoke in parables...instructed us to view The Pretties as mere shapes on the horizon. We even break bread on the mountain...a real "loaves and fishes" moment.

His point is well taken; I do have a tendency for drama and explosions that rocks one back on their heels. There are roses to be found outside gardens...wild things to wonder and wander over...just on a smaller stage. And so now I'm left to wonder, who's converting who? 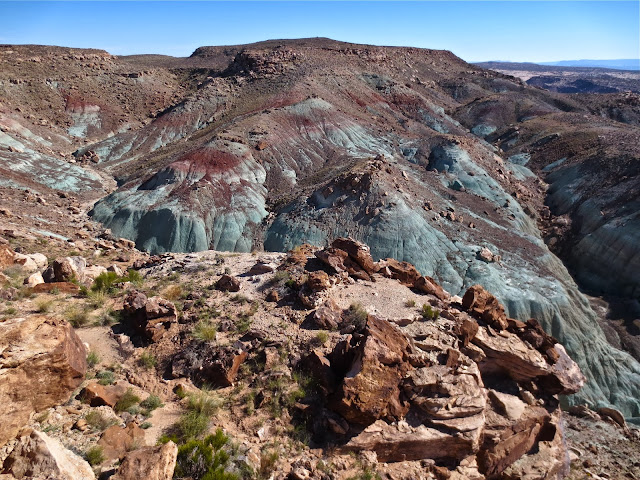 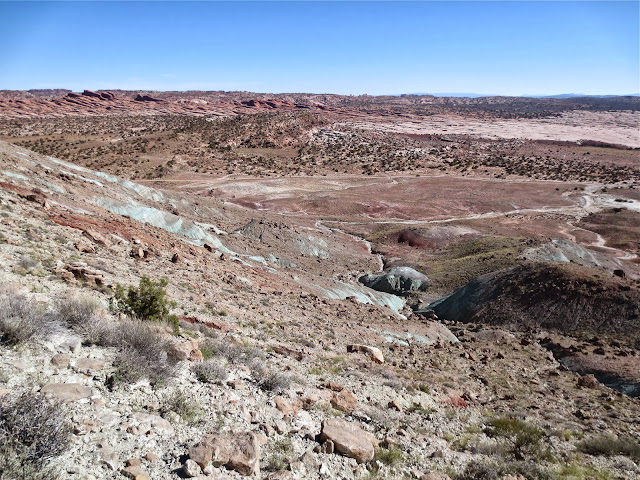 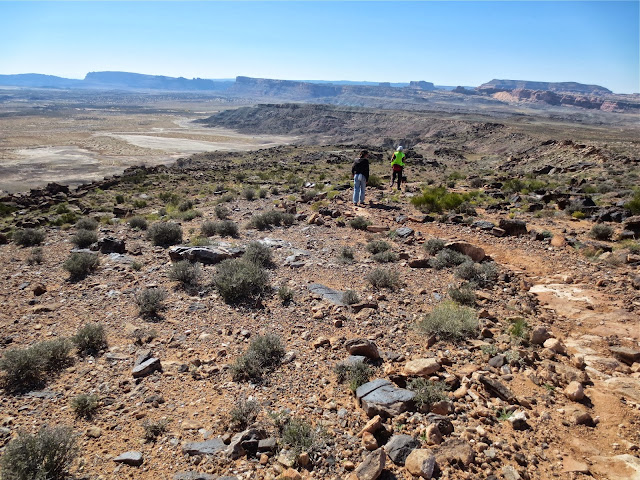 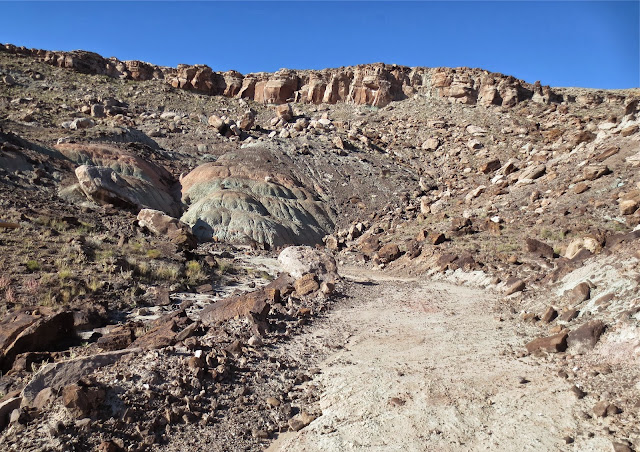 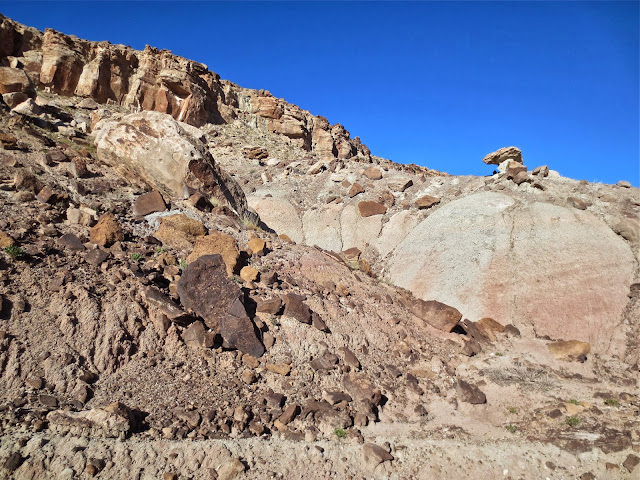 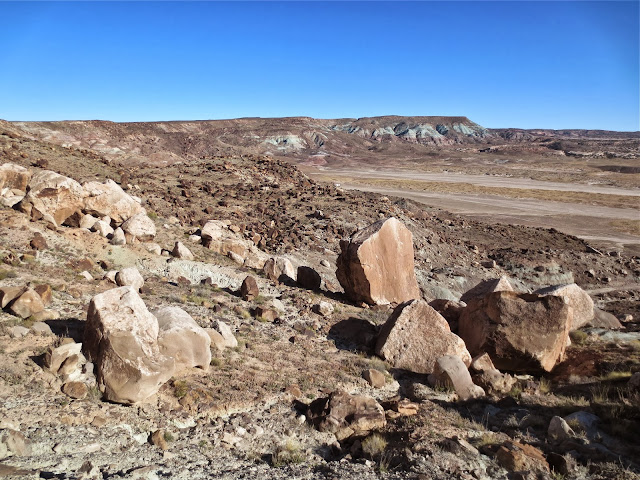 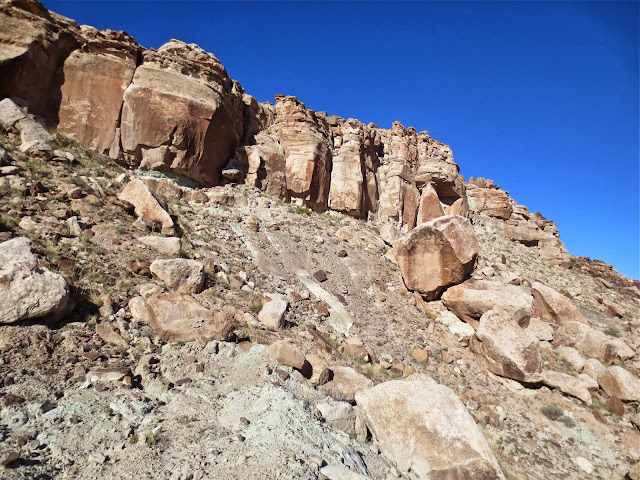 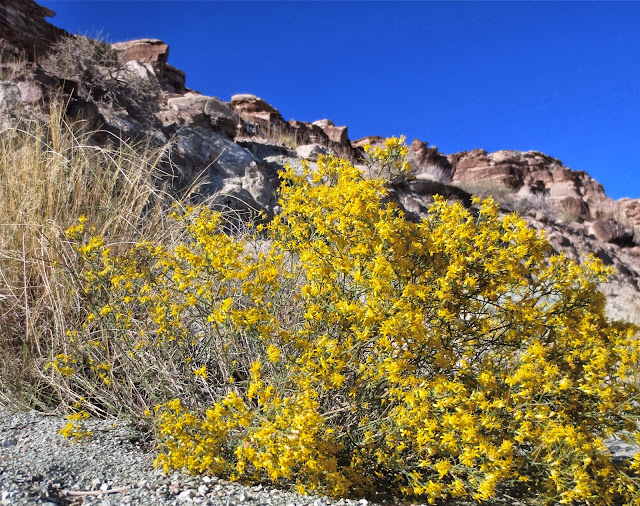 A close inspection reveals our boondock camp as two tiny specks at the far left. 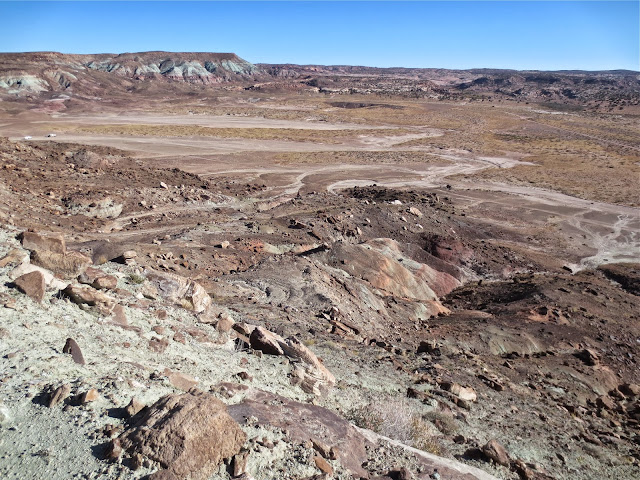 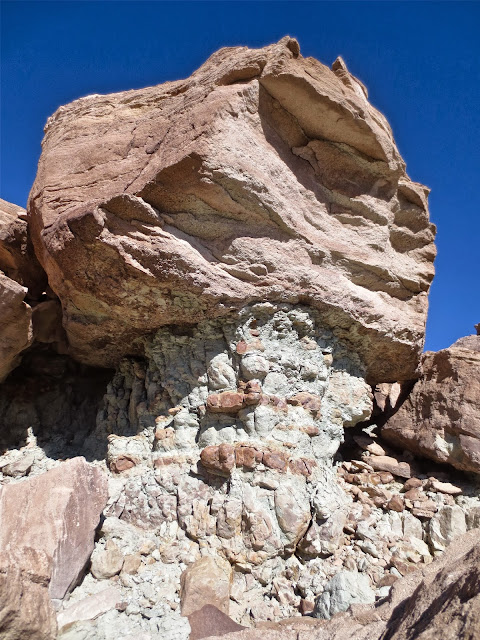 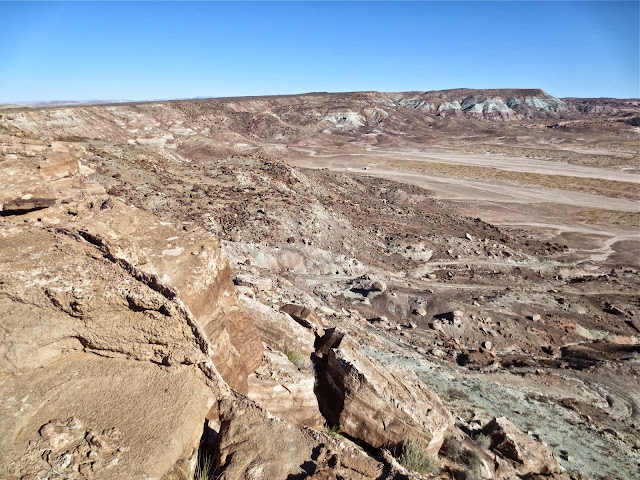 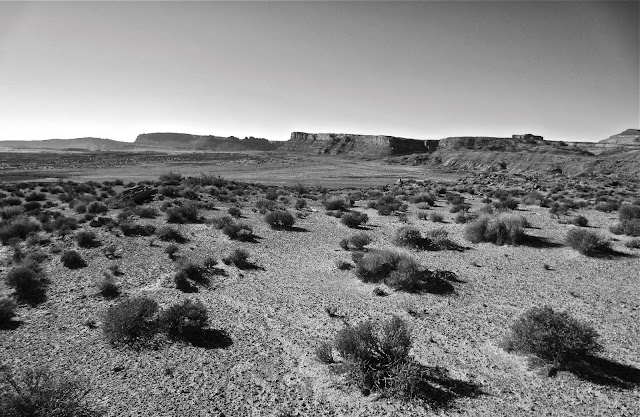 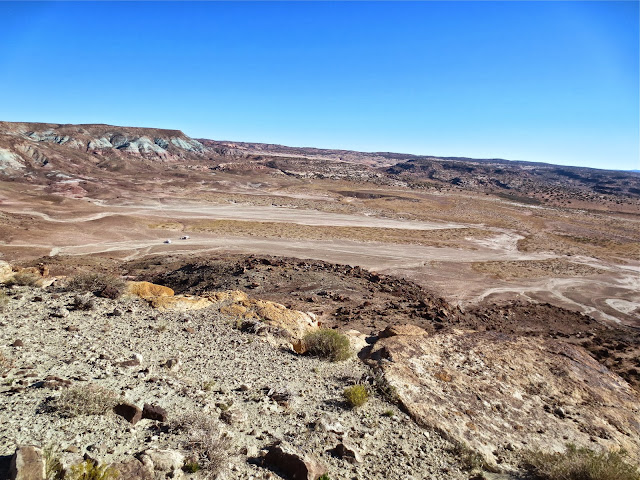 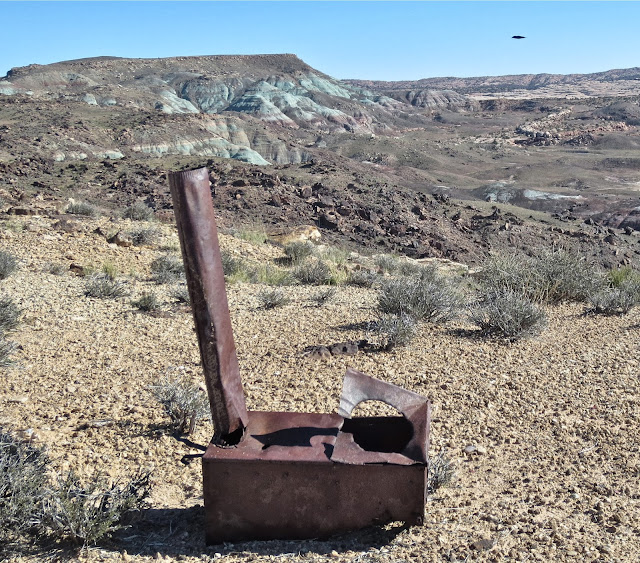 This is a 9.5 on a scale of 10 out here in the Mountain Bike Mecca of the world. I know that it can be ridden clean by a few young gonzo dare devils on full suspension mountain bikes because I've seen it with my own eyes. At 62.98 years of age and riding a "hard tail," discretion is often the better part of valor. So The Boonster and I tried to ride a 7.5 instead. 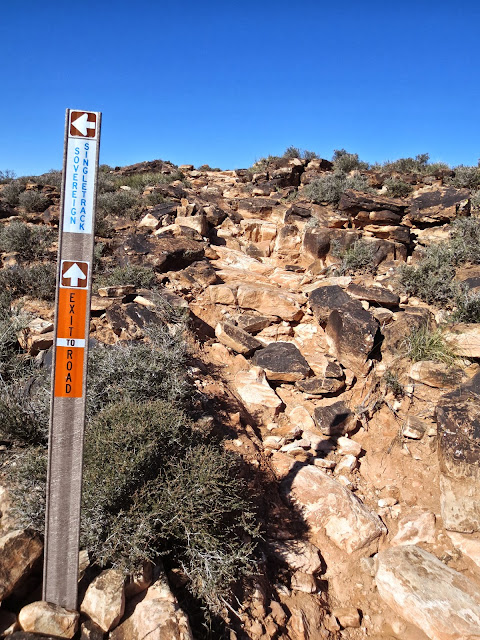 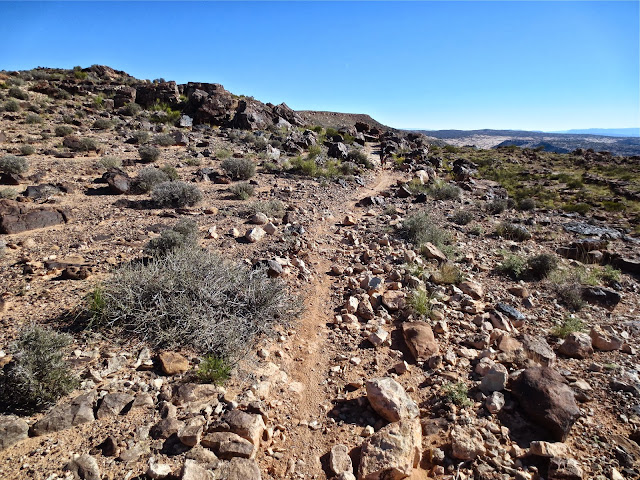 And this is what I have to show for it, a compound fracture of the derailleur. For this bravado I got to push-n-carry the 29'er home and a 200 dollar repair bill from a bike shop in Moab. I suppose it could have been worse... 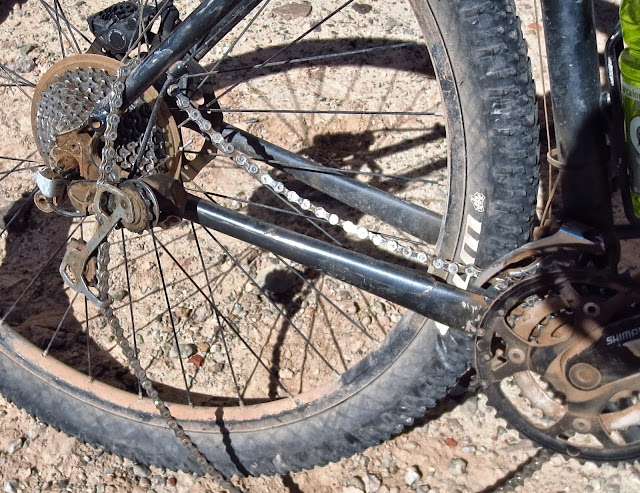 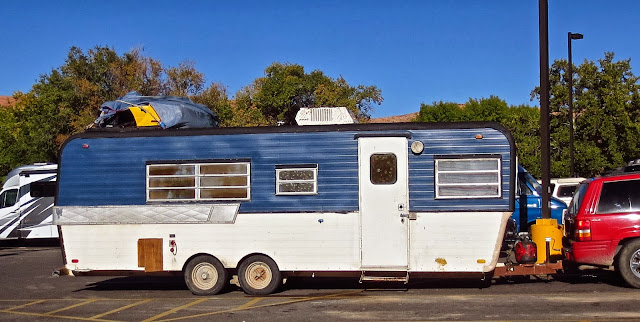 Early one morning we were awakened by headlight pulling into our camp. I thought, "God, they've found us...here come the ATV'ers." We could see a dozen or so dark figures running around setting up camp, laying out tarps and unpacking big bags of gear. But as the sun rose the marauders turned out to be Hot Air Balloon'ers, and we had a colorful start to the day. 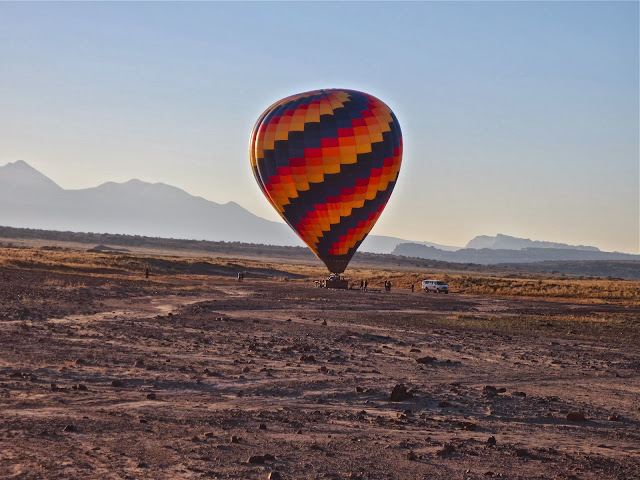 A couple of crew guys hung on the basket as it left the ground, before releasing their grip at the last moment and dropping back to earth. A show for the tourists I suppose. 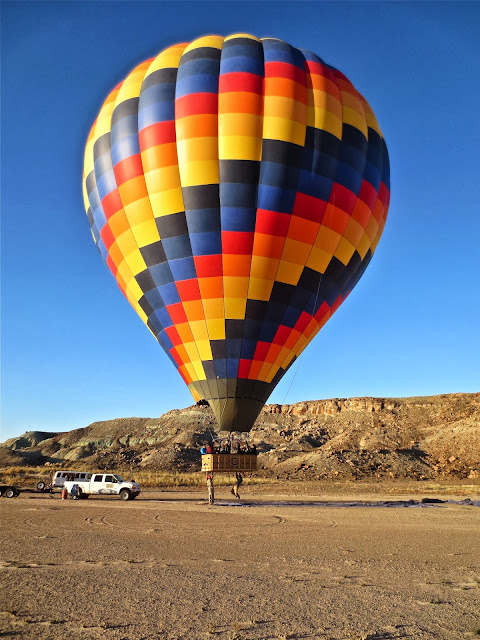 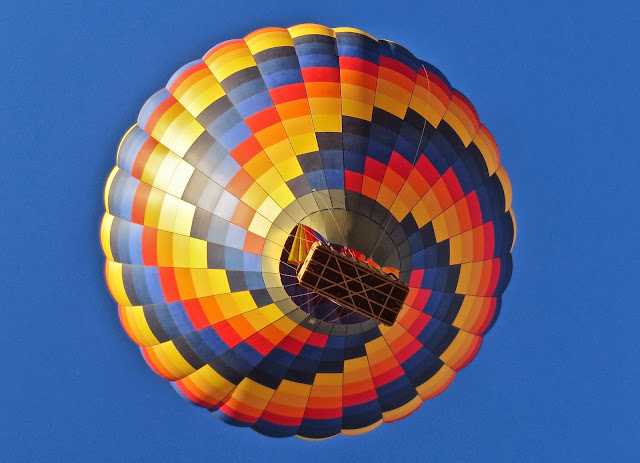 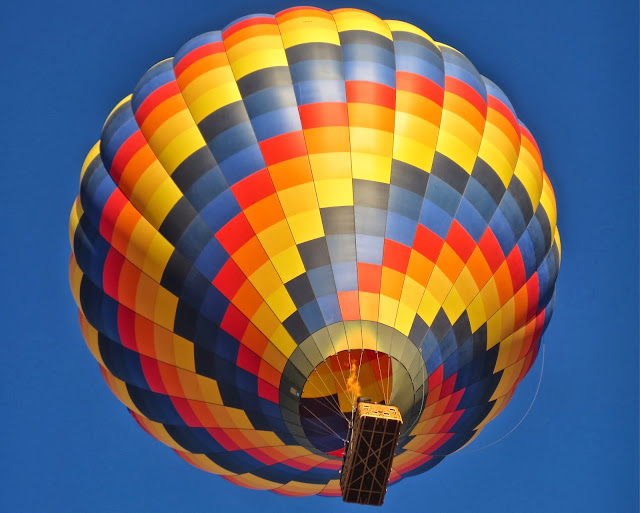 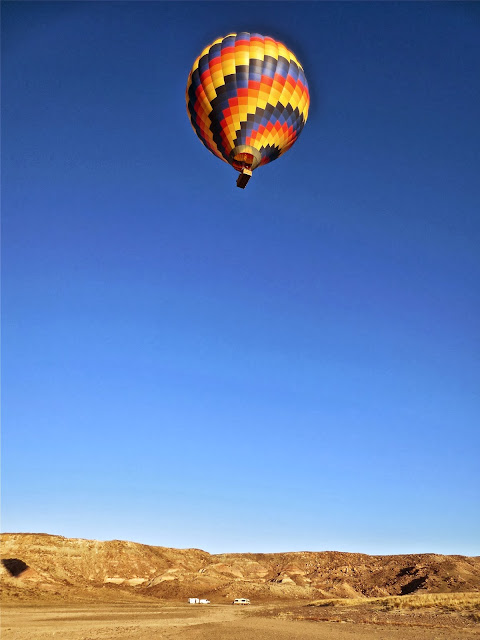 Posted by Box Canyon Blog.com at 7:50 AM