The San Rafael Swell sure is swell...a 60 million year old layered uplift of sandstone, shale, and limestone that juts sharply out of the ground east of Green River, Utah. I get goose bumps and trigger happy every time we drive through, over, or around it. To me, the swell resembles a Backbone with skin peeled away, exposed to the elements. You can find more "backbones" in Utah, one above Boulder named Hell's Backbone where you can drive the "vertebra," if you dare. Capital Reef forms another backbone, as did every Mormon pioneer who managed to carve a life and living out of this spectacular, but unforgiving land.


We broke our Squatter's Camp Monday morning. The wind was already kicking up dust and streaming clouds; it was oddly warm. Boonie, quite the early bird, beat us out of camp due to concern over forecasted 60 mph gusts, said he'd call later and check in.  I'd be concerned too if I was pulling a long trailer with a high profile van, especially without a sway bar.

We had a fine tailwind going north out of Moab; I hardly touched the gas. But when we turned west on I 70 everything changed. The only way I can describe driving broadside through that shit is to say it felt like a no holds barred pillow fight with someone twice your size, and with twice the "pillow." Goldie, with her low profile and duel rear wheels, hung in there pretty good, but it was two hands on the wheel every second of the way.

Utah is one of the few states that allow big tractor trailer rigs to pull three trailers instead of two. With Interstate speed limits of 75 mph on I 70, and 80 mph on I 15, let me say on a day with wind gusts of 60 mph you better have one eye on the mirror, Mick Jagger, cause those big rigs are radiating a tricky force field that can move RV's around like cheesy little plastic chess pawns.

Goldie was one of those pawns...bullied to the shoulder like some panty waste lightweight every time a semi overtook her. It was a difficult maneuver to compensate for the the force field at just the right moment...right as it started pushing on Goldie's backside...and steering toward the trucks instead of away. I don't need to explain it; those who chose the RV lifestyle know exactly what I'm talking about. Rigs with three trailers weren't able to stay in their lanes; it was a white knuckle crapshoot all day long. But if there is one thing I hate more than driving in high winds, it's waiting them out...trapped in some destination-less Walmart parking lot. So I peed on "discretion," and took my chances with "valor."

Coming off the mountain, Richfield looked like a dust bowl right out of Grapes Of Wrath...a steady 45 mph gale spit in our face. Driving 55 mph into the wind is essentially like going one hundred mph. I thought about the recently installed solar panels...wondered if they would go sailing off the roof like frisbees and crash into Bobbies windshield. Boonie called to say he had had enough and was going to wait it out in Richfield's Walmart parking lot. After three weeks of wilderness and solitude in Camp Boonie near Moab, I couldn't stomach the thought of a night in Camp Walmart, of rocking sleepless in a dust bowl with nightmares of The Wizard of Oz running through my brain..."Auntie Em, Auntie Em!" I told The Boonster we were going to make a run for it, then climbed the ladder to inspect the solar panels. All was well. What a test.

I 70 T-bones I 15 way out in the middle of Nowhere, Utah. One would think that the intersection of two major highways would be a good excuse for a Gas n Go, or something. Just when I thought it couldn't get any worse, I 15 proved me wrong...twice as many big rigs, seemingly oblivious to the wind and either unaware, or uncaring of, what their force fields were doing to other vehicles and drivers who thought conditions warranted slowing from 80 mph to 55. It was a good thing that there was a wide shoulder for me to use to regain control over Goldie.

Skies were black, nearly horizontal veils of rain pounded, relented, pounded, relented...like going through a high pressure car wash. At Cedar City rain briefly changed to snow, then hail, then back to rain...big, heavy drops that smacked the rig with such force I couldn't hear the radio. 25 miles is all that stood between us and lower elevation. I could see the sun was shining down toward St George.

Pavement began to dry. A few miles south of the Toquerville exit is the off ramp to Leeds. From there we made our way to the Red Cliffs National Recreational Area campground. Jim and Gayle tipped us off to this beautiful hideaway last year. It's a small camp, tucked away in protective red hills, with a creek and cottonwoods...now budding out in fall splendor.

Finally, a port in harbor...refuge from the storm. Light rain fell straight down, a wonderful sight and smell, and hardly a breeze. As night overtook us, owls hooted from creekside cottonwoods, and the hills glowed red against night black skies. 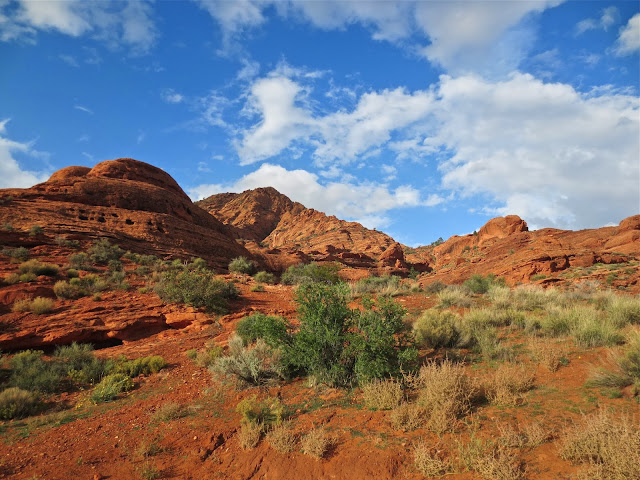 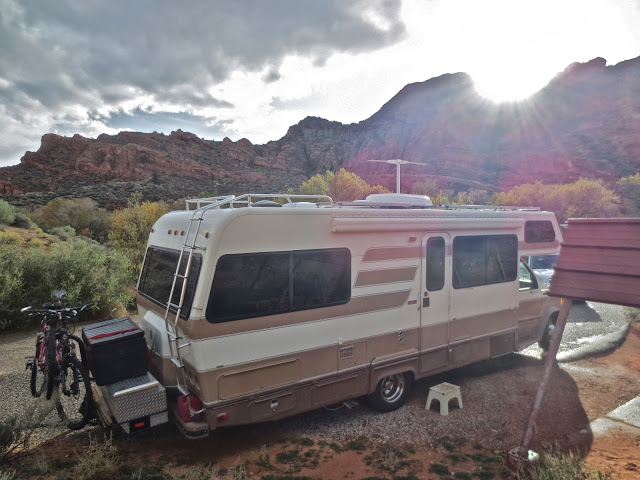 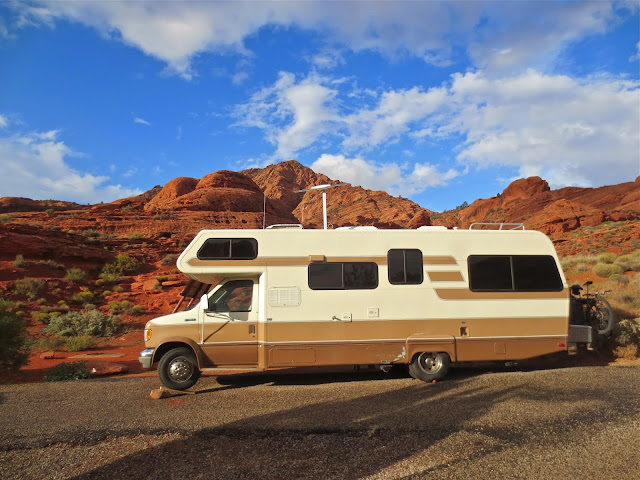 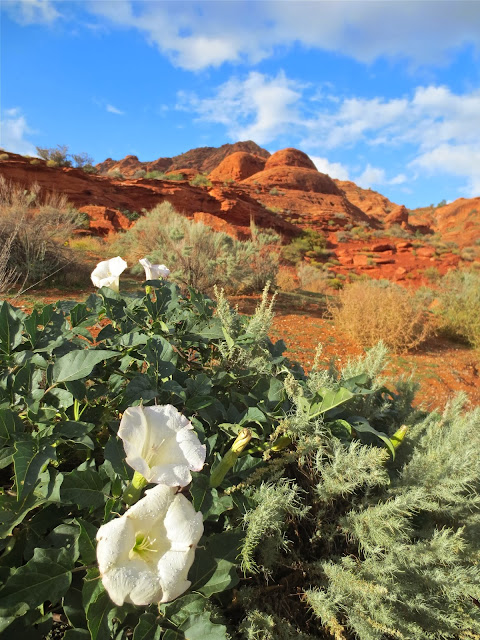 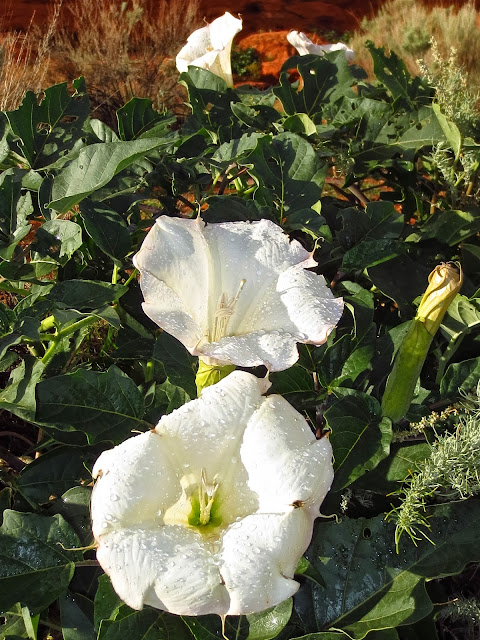 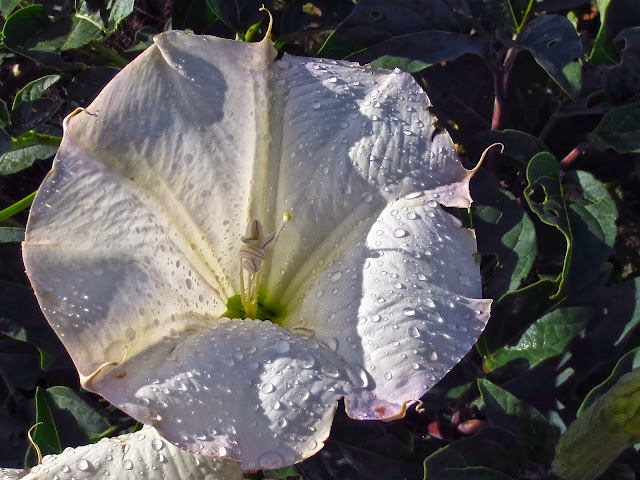 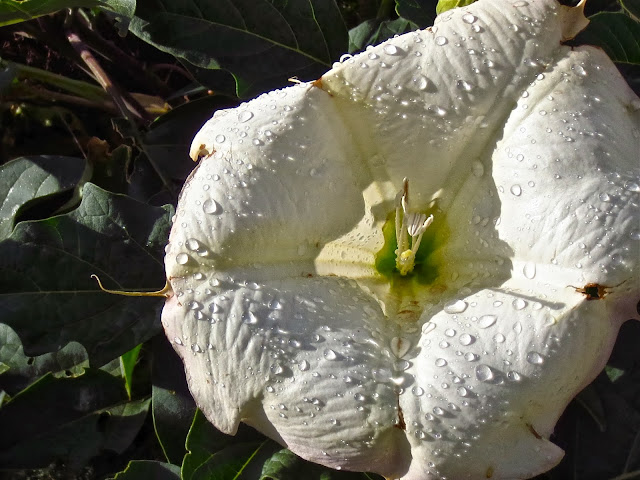 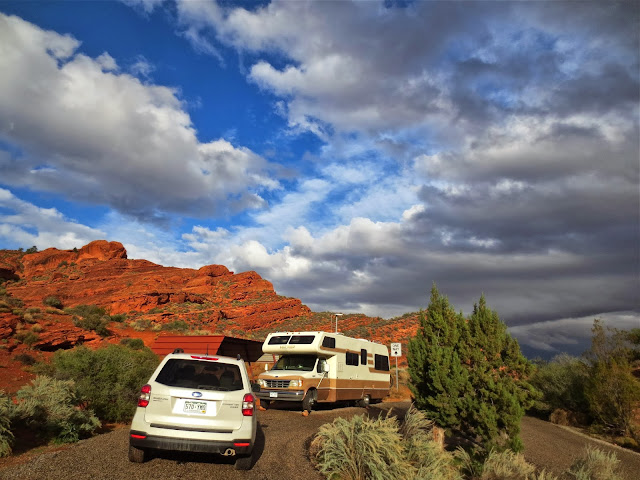 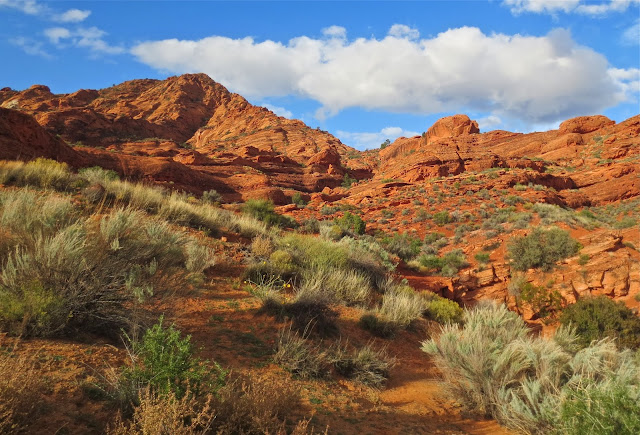 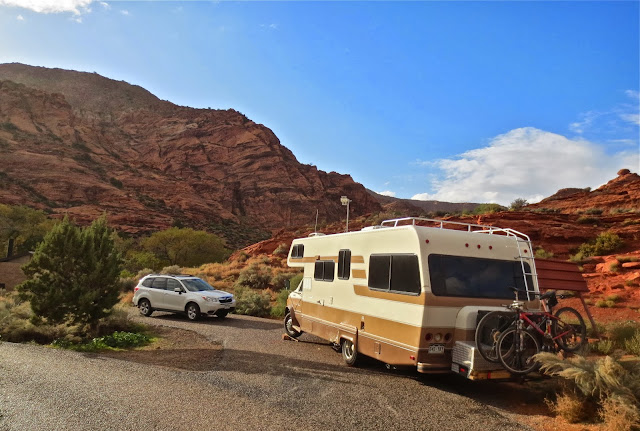 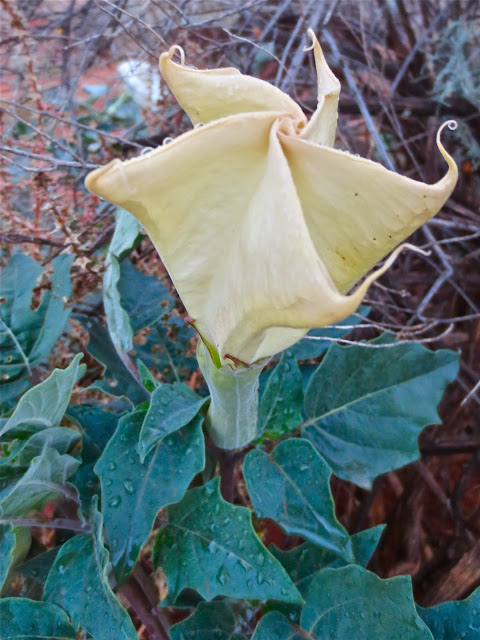 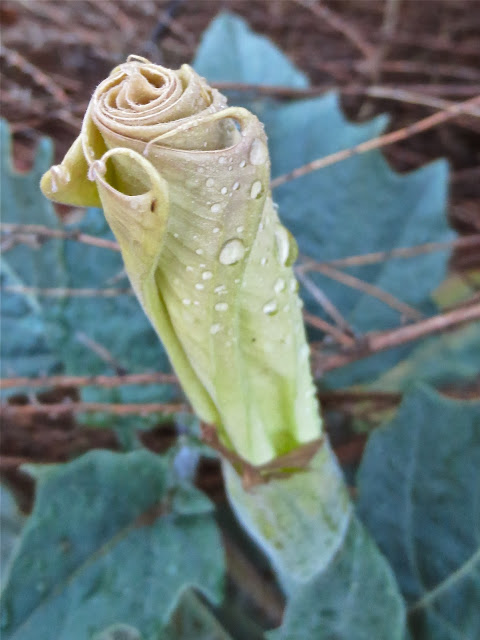 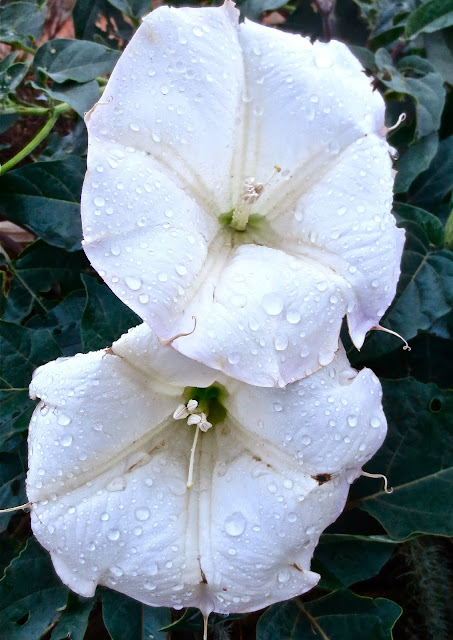 Posted by Box Canyon Blog.com at 8:02 AM