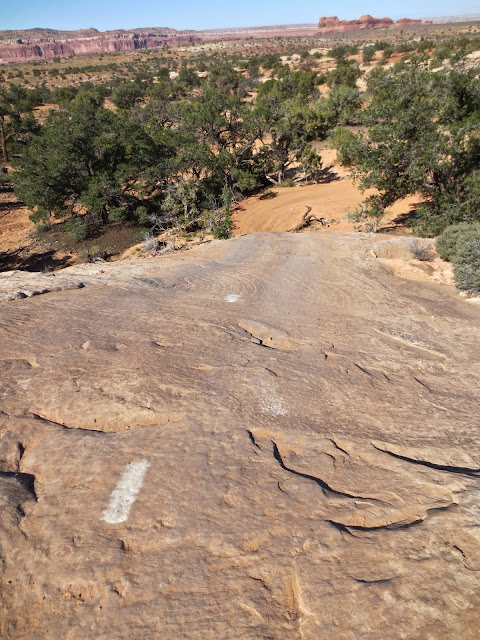 Nowadays we share Utah's Sickrock Bike/Jeep/ATV/horse/hiking trails; "Multiple Use," you know, everybody gets a slice of the Recreational Land pie. Even the big oil and gas companies get to "recreate," but they are allowed to put up a fence and Keep Out signs. One by one, all our favorite boondocking spots are being "improved" with a big oil bulldozer...flatted into football sized field with a twenty foot wide access road that will forever scar the landscape.


It was Mountain Biking that put Moab on the tourist map. Sure, Willys Jeeps have been crawling over the slickrock and through sand washes around Moab since the 40's, but it was in search of uranium more than recreation.

Govie's Multiple Use Policy is one of those double edged swords, it waters down the enjoyment to let everybody bring their toys to the same sandbox. Multiple use sounds good; it has good intentions; what could possibly be wrong with sharing?

But what started out as a well intended "good idea," modeled on social policy, soon became unmanageable (like the social policy) and turned into a "free ride," only now...it's on a motorized ATV instead of the Welfare Wagon.  Yes, I'm talking about motorized All Terrain Vehicles of every size, shape, and decibel level; They seem to outnumber the peddle pushers these days. Our peaceful boondock was invaded by a half dozen Toy Haulers and trailers that spat out machine after machine after machine...Jeeps, motorcycles, and ATV's. The fire rings were built and lit, the music, the generators; it was a small city.

Bobbie and I have been coming to Moab's Slickrock since the advent of mountain bikes...before they had cushy suspensions to dampen vibration and keep teeth from chipping against each other. There was room around Moab for everyone in those good ole days...Multiple Use works just fine until a good place get's discovered. Having seen Moab before, and looking at it now, the Golden Era has faded, at least in my book. Oh sure, the wonderful red rocked canyons, sand, and arches are still here—but now, lines of motorized bugs crawl them like ants at a sunday picnic, and drilling rigs dot the landscape like cell towers. 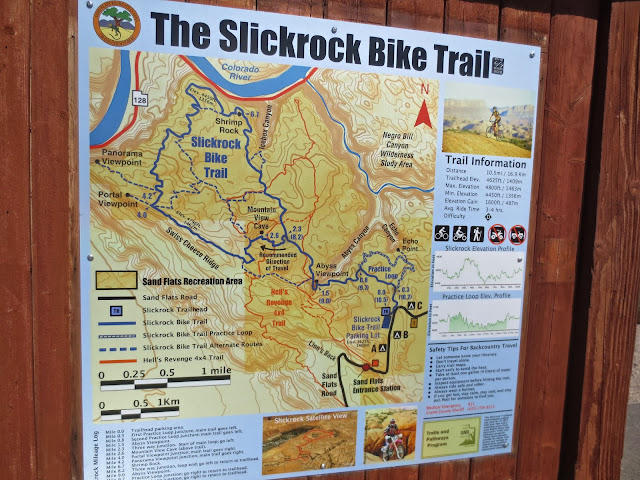 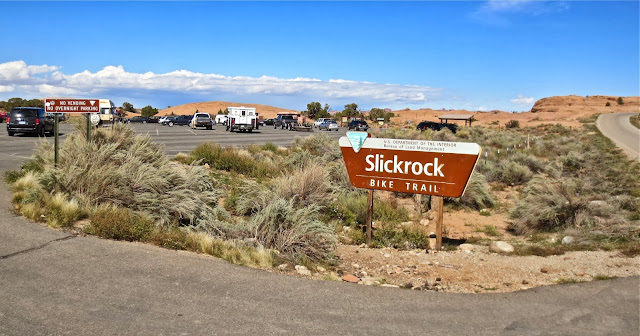 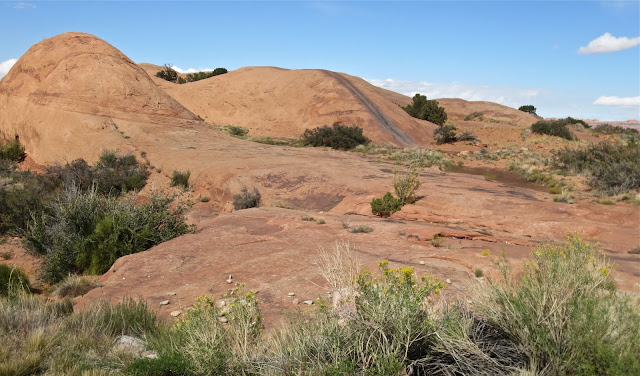 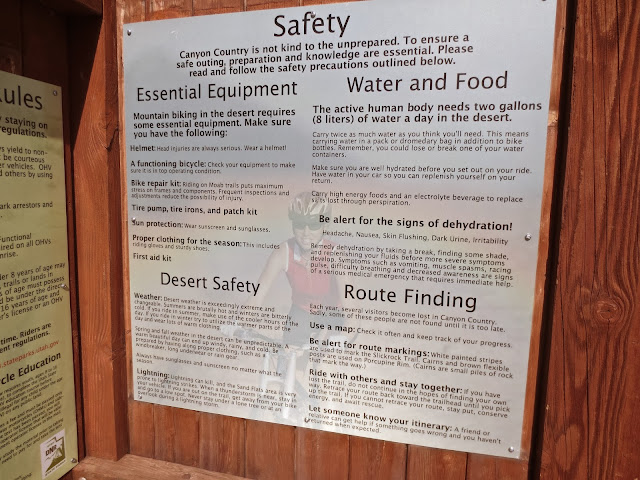 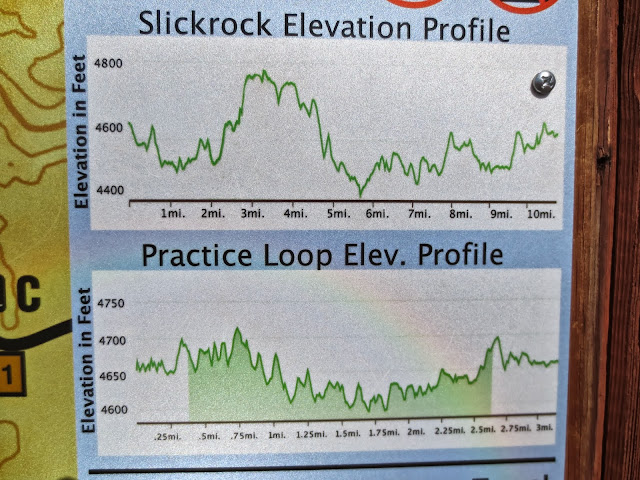 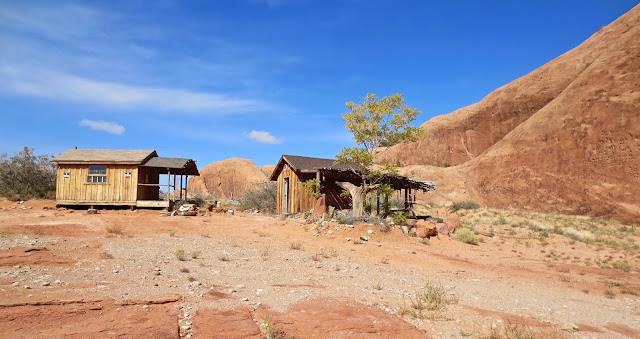 Most of the time I'm a reasonable guy. I understand people must earn a living and renting Jeeps and ATV's in a small town sure beats a cube in the cit-ahh. So I don't know who the Sam Walton to blame...motorized technology, the Population Bomb...Real Estate developers? Myself? The Toy Hauling wagon train that moved in on our boondock were comprised of all ages, from tot to gramps. A child, he couldn't have been more that five years old, rode a full sized ATV around all by himself. It seemed dangerous...his legs dangled a foot or more from the brake peddle and his hands were too small to reach the hand brake. Don't get me wrong, this was not a purposefully loud and obnoxious group, just extended family and friends out to have some fun on what might be the last warm weekend before winter sets in. I can't say our peace and quiet was "shattered," but it was broken. There was always at least one generator humming, voices, and people moving about setting up the perfect camp...you know, chairs arranged just so around the fire, meat cooking in the smoker, children playing, bursts of laughter. I guess it felt a little too much like an RV park or campground. So Boonie consulted his new "source" for a place where we could regain perfect peace. As it turned out, it was only a couple of miles away and we have only the sound of a light breeze and sunlight hitting the ground.

A couple of days ago (or was it a week?) Bobbie and I walked Moab's creekside bike path and hiked up the Sand Flats Road to The Slickrock Trail. The next day Boonie Boonster led us on a Mountain Bike ride to Uranium Arch. It didn't glow, but of course it was daylight. 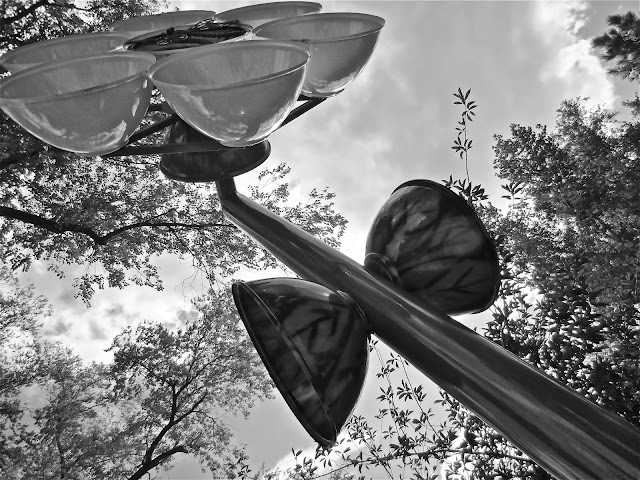 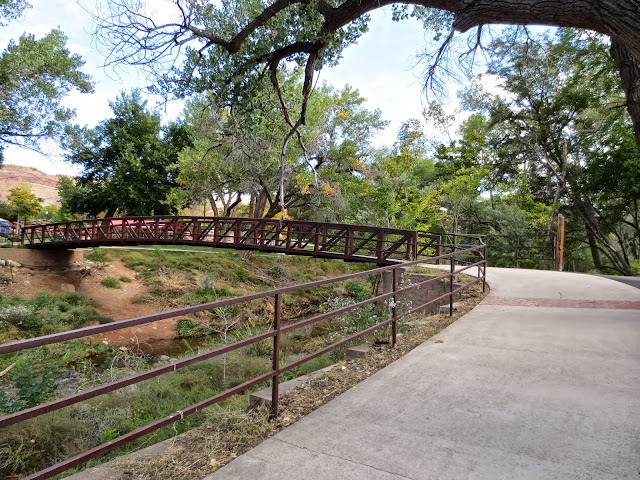 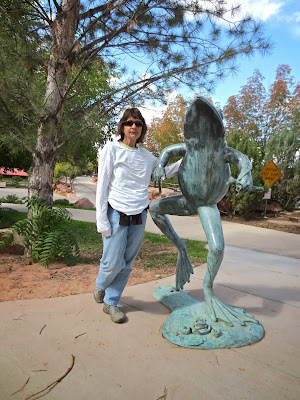 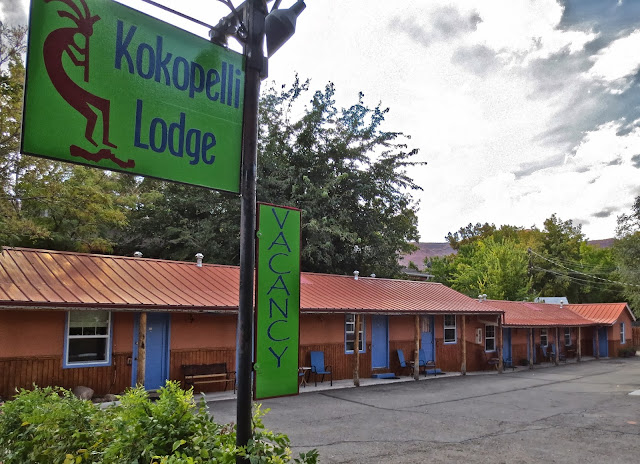 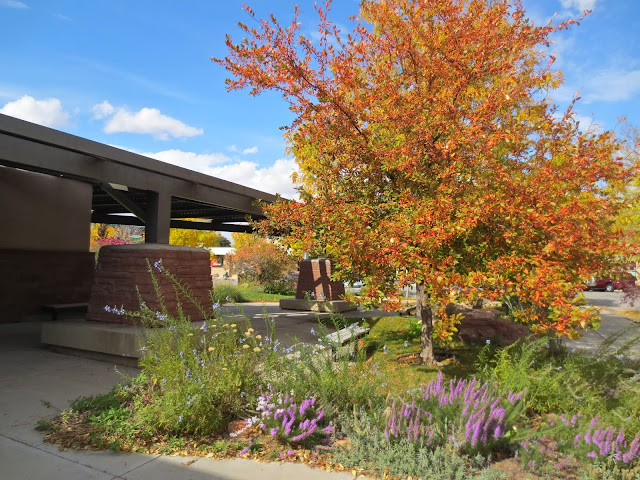 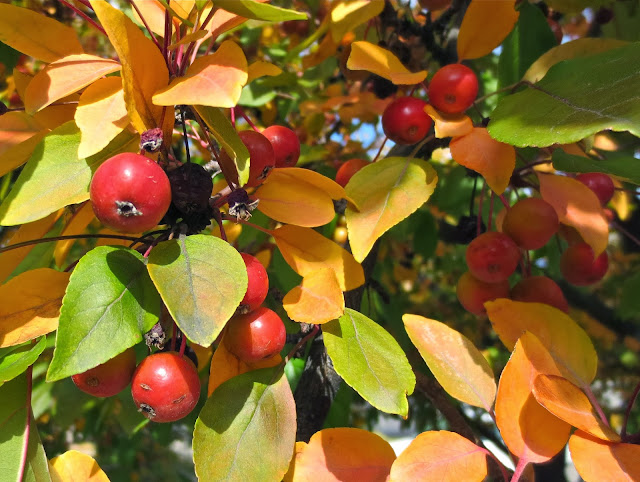 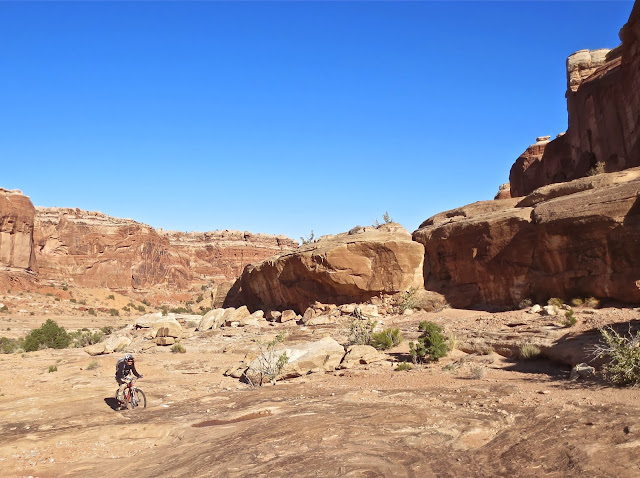 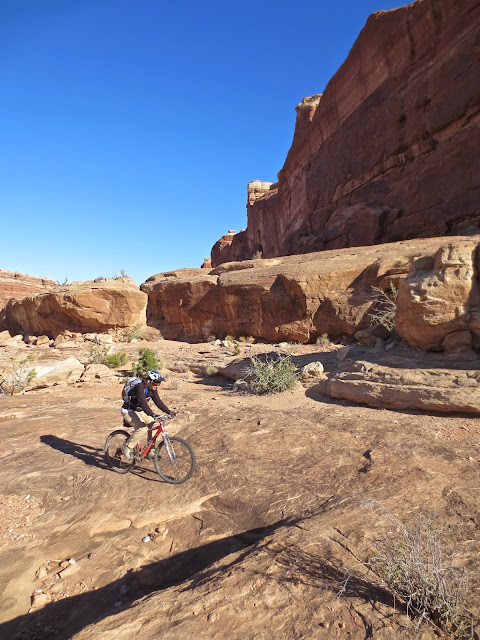 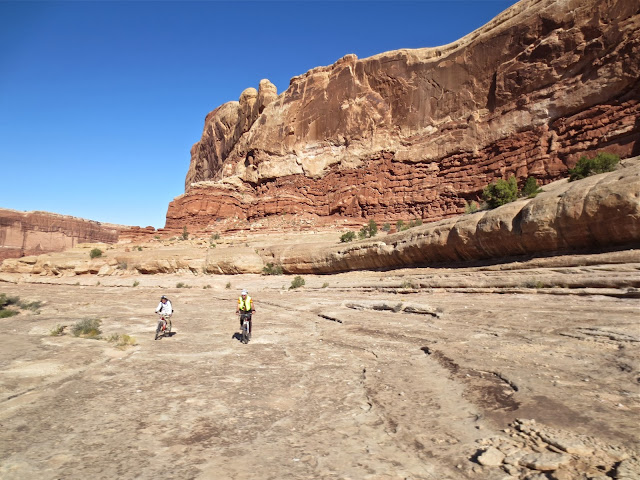 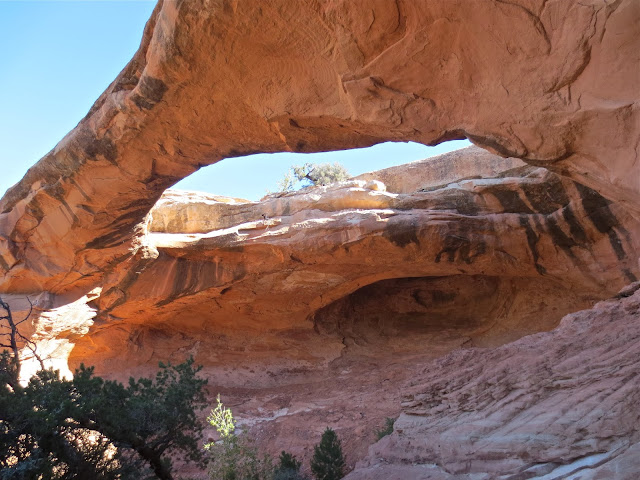 It took every ounce of restraint I could muster to not ride across the top of Uranium Arch. It was 12 to 14 feet wide and slightly humped down the middle. Better judgment prevailed, tho, and now I'm a little disappointed in myself. It would have made a great photo...one that Bobbie would surely have put on my headstone :) 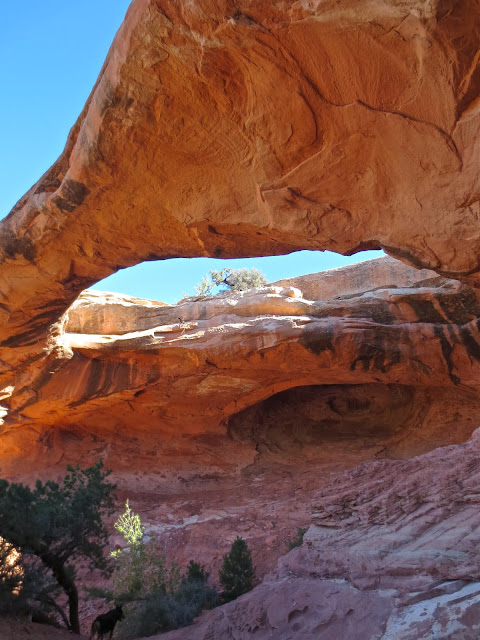 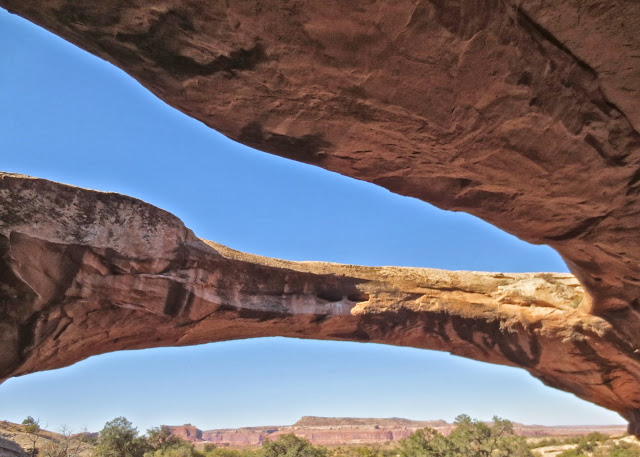 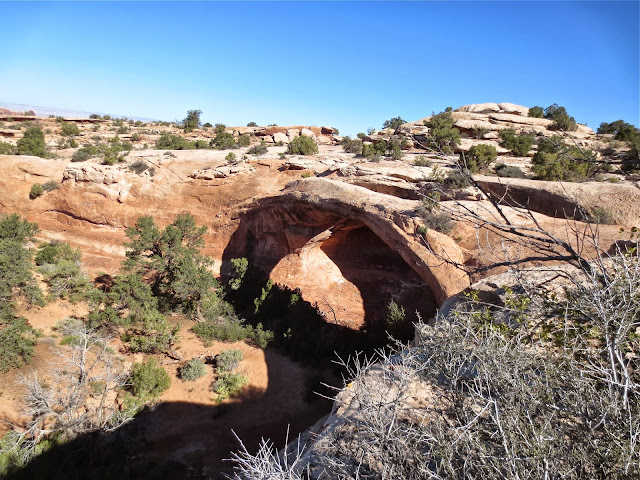 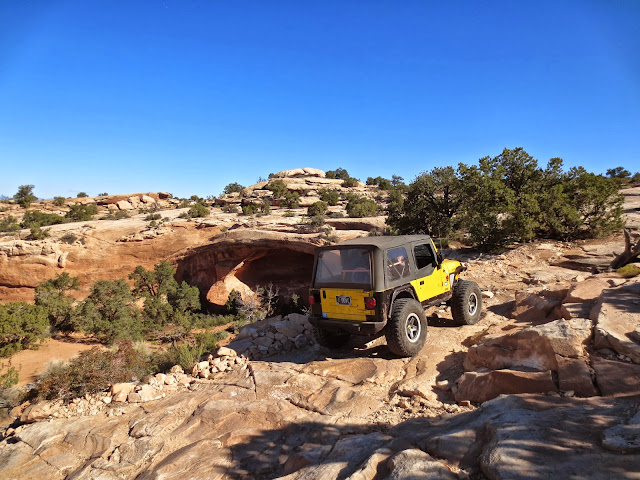 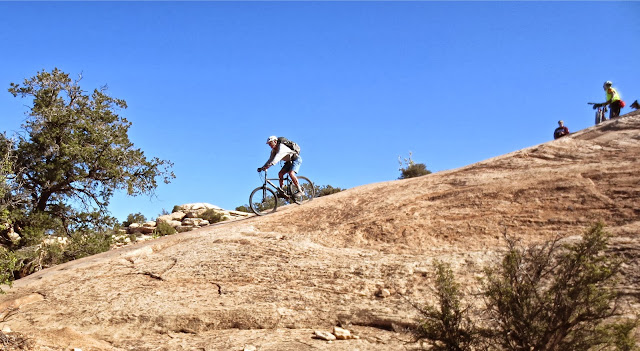 Below is our new Boondock... "Barren desolations is stretched before me, and yet there is beauty in the scene." John Wesley Powell on Utah's canyon country. 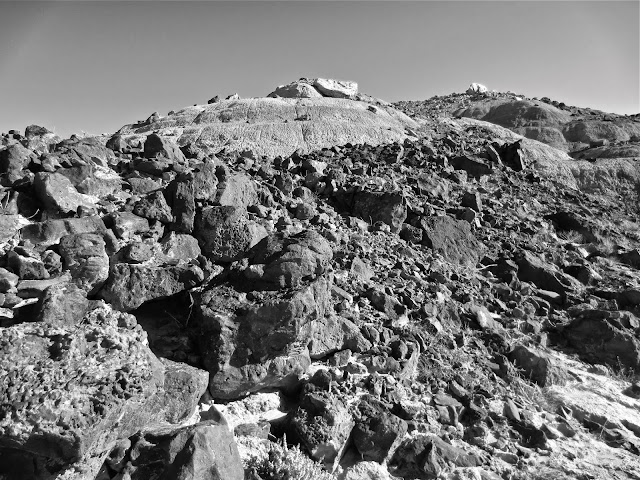 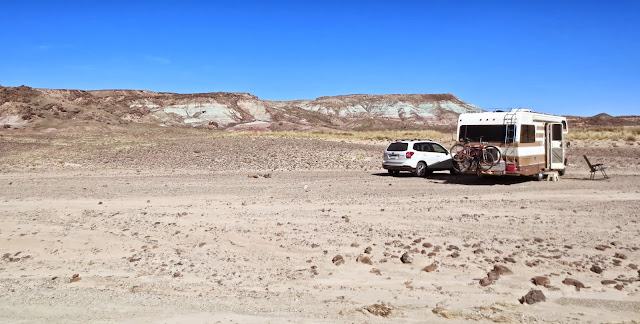