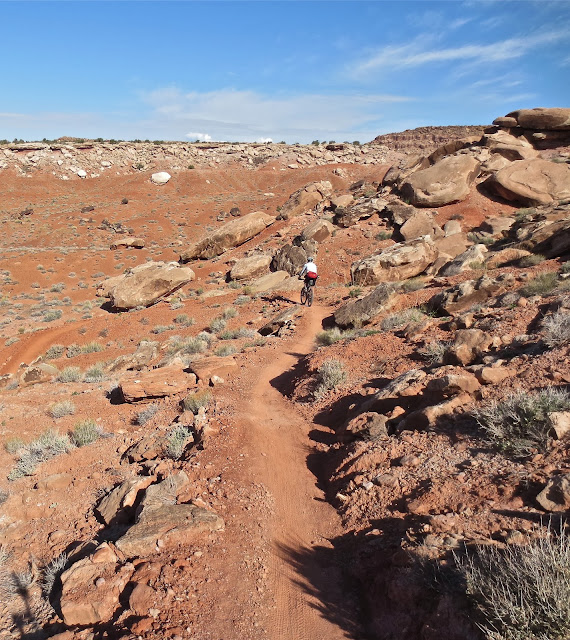 There are probably more than a few newbies and wannabees out there...tiring of all the S. O. S. of mountain biking from what has become a semi-permanent boondock. Their vicarious "hitch" has been itching...ready to suck in the slides and fire up the diesel. Trust me, we are winding down; try to be patient while we milk our Red Dragon Hills and weather gods...both of whom seemed to have taken a liking to us.

In the meantime try to recall for a moment the excitement and adventure of what was your first mechanism of speed and escape. It was a bicycle. I don't count tricycles for a couple of reasons: first, a kid can run faster than a trike; and two, one block from home they are exhausted, which only whets appetites for the real deal.

Once training wheels come off a kids life is forever changed—particularly for those genetic mutants with the disease of wanderlust...the insatiable curiosity of needing to know what's on the next street over and beyond. RV'ers are like kids, only we are in our second childhood and our "bike" makes into a bed and breakfast.

I was a city-slicker Phoenician when my training wheels finally came off—sidewalks and pavement as far as the eye could see. But the glamor soon wore off my single speed; it was geared too high for even modest uphills, and too low for the zoom down. My pedals were "married" to the rear wheel, having no "coaster" to disengage one from the other more or less turned them into a leg eating Vegomatic. There were no brakes beyond dragging feet on pavement...which put legs dangerously close to the Vegomatic. Oh the countless bloody shins endured, and no telling how many soles of Converse brake pads worn out.

One day my interest in bicycles was rejuvenated by a sleek, skinny-tired three speed English Racer in a J C Penny catalog. At 8 years old this was my first experience with breaking the 10th commandment, "thou shalt not covet." I truly lusted after that bike; English Racer, it sounded so fast, so foreign...so European, like Maserati. After a couple of months of incessant whining my parents relented and ordered one. I'll never forget, it came in a big cardboard box and I had to wait an eternity for Dad to come home and put the front wheel on.

The problem with my new English Racer was that we had moved to a ranch in Southern Arizona. The only paved road was the narrow, shoulder-less strip of asphalt that connected Sierra Vista to Bisbee. Our ranch roads consisted of powdered dust or sand, and were full of goat heads...hardly the environment for a road bike.  I don't know why Mom and Dad relented, they had to know and probably tried to explain that the object of my lust was not well suited for our new environment. But you know the power of whining; it wears parents down like an interrogation. After a while they just want peace and quiet restored...another subject at the dinner table...and a less pouty child wandering around with his lower lip hanging out.

Below: The Boonster, about to enter his second childhood. Notice the two new knobby tires...oversized to better handle Utah's rugged terrain. He covets a 29er but insists on waiting till every last drop of use is squeezed from his 26er. I mentioned that it might well outlast him, that he should indulge his few remaining years of health and vitality with the object of his desire..."think of it as a new puppy." But he is strong willed and frugal; admirable traits, just not as much fun. We only get one shot, people, and at this age our collective glass is near empty. I say go for it. 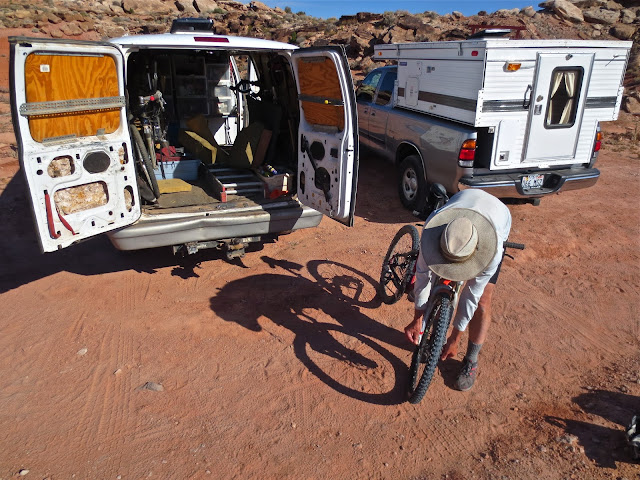 My new derailleur, chain and nine gear cassette...all of which got destroyed on lava-rocked, mountain bike eating single track near camp. 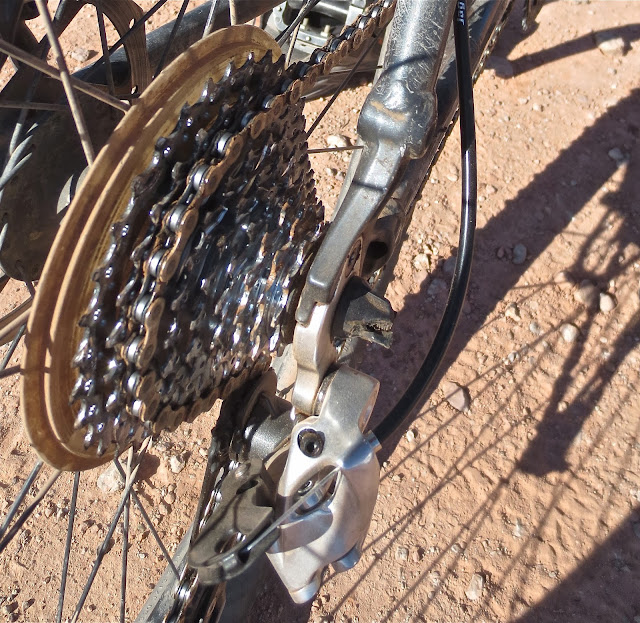 A map of Klonzo Hills trail network, a forty minute ride from camp. 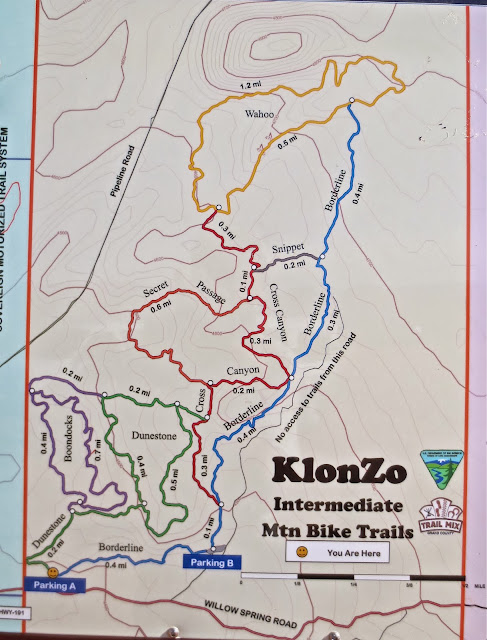 Klonzo Hills is a network of trails for mountain bikes only...no motors allowed. What a great, smooth ride it was without motorcycles ruts and rocks spewed everywhere.
The Boonster rediscovers his inner child below...but he tried not to be too enthusiastic about our discovery. 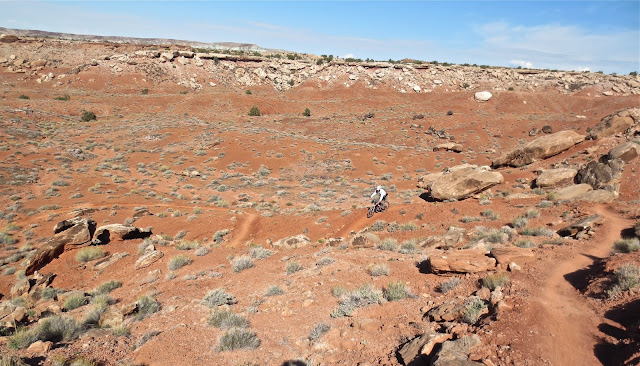 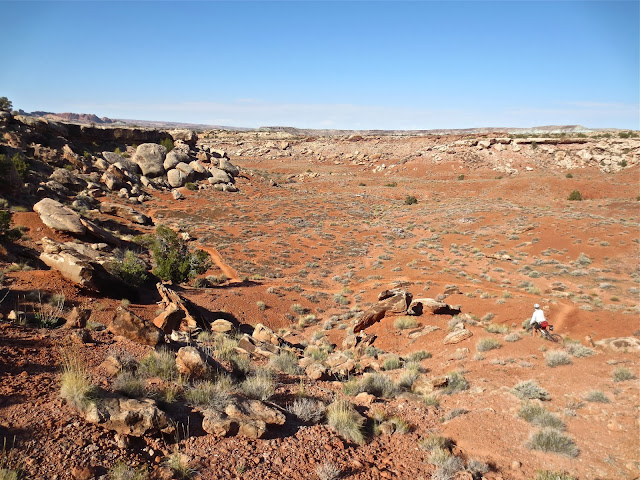 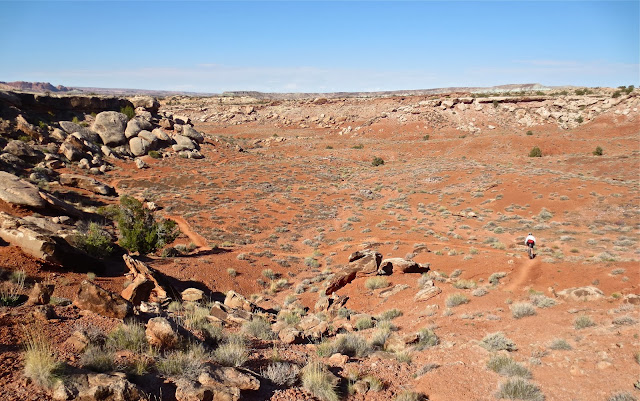 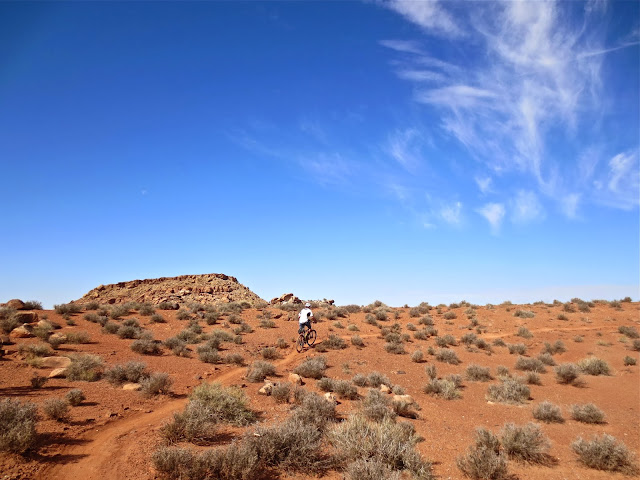 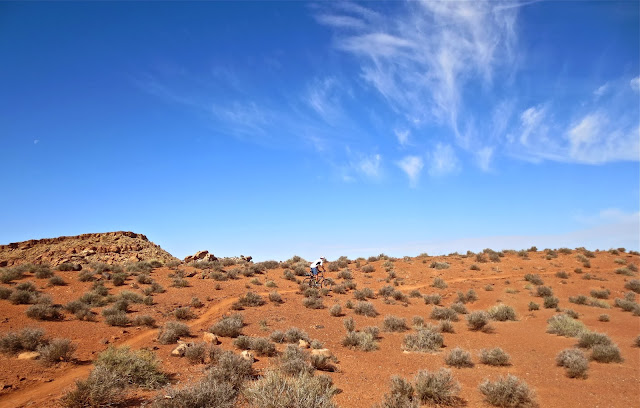 Our boondock camp is visible over my right shoulder...way over by the the colorful soils. Note the new biking jersey...a first. It has three pockets on the backside for water, tubes, and food. God I am weak... 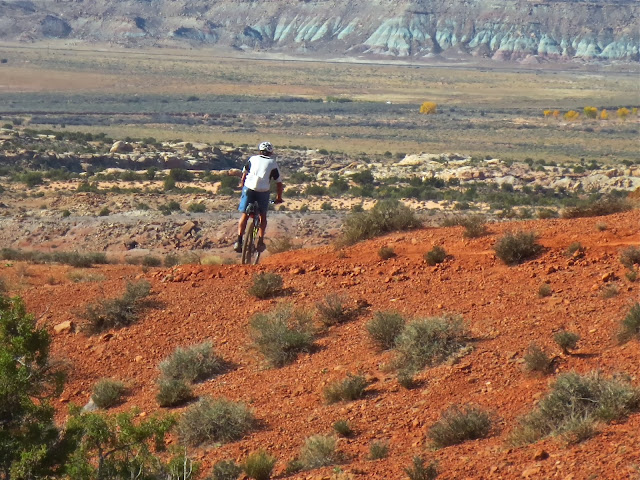 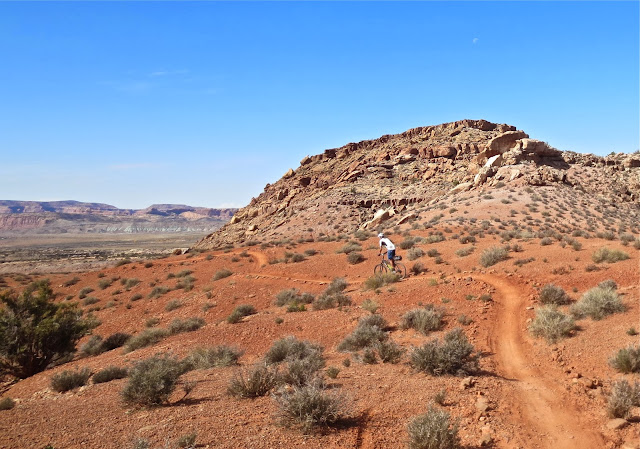 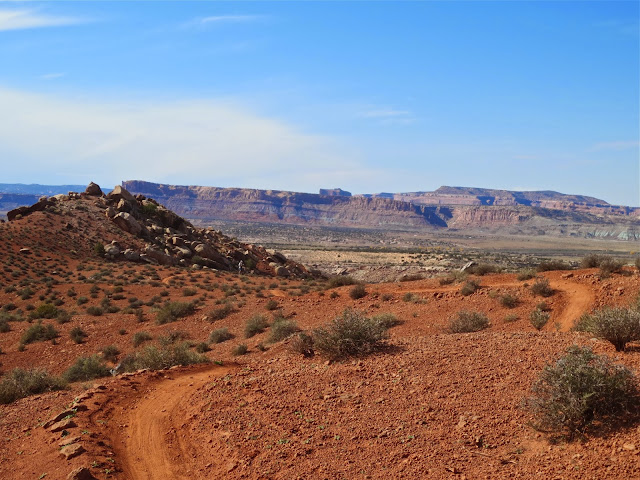 The Boonster expertly navigates a tight section of boulders and steep downhill slick rock. Note the overkill of blue lines so you don't get lost. 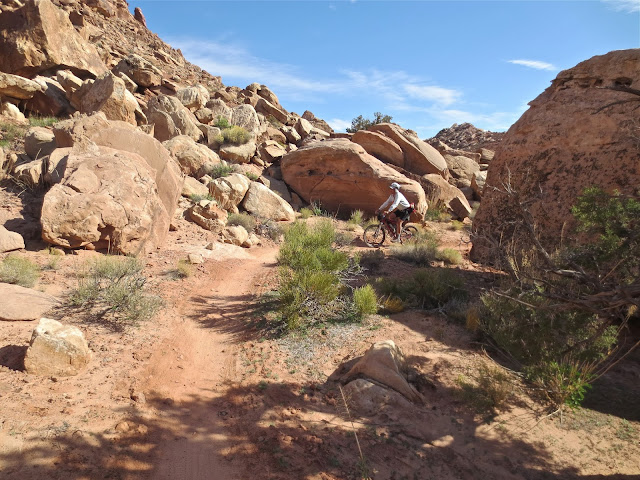 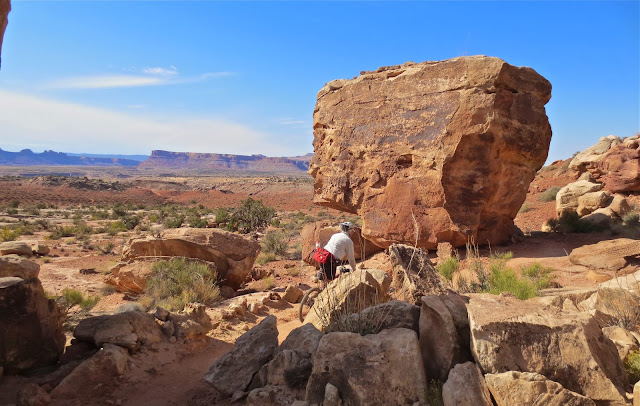 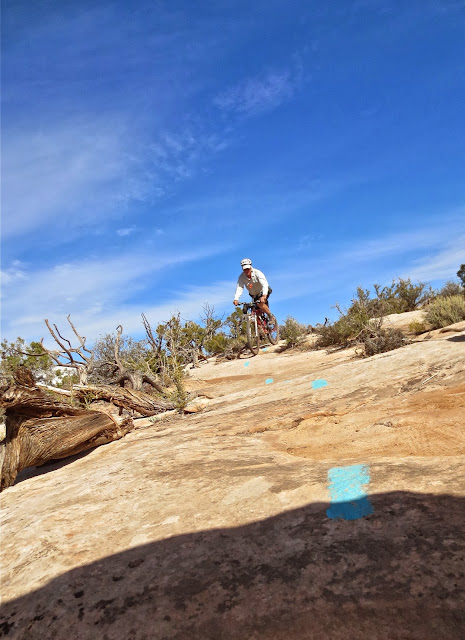 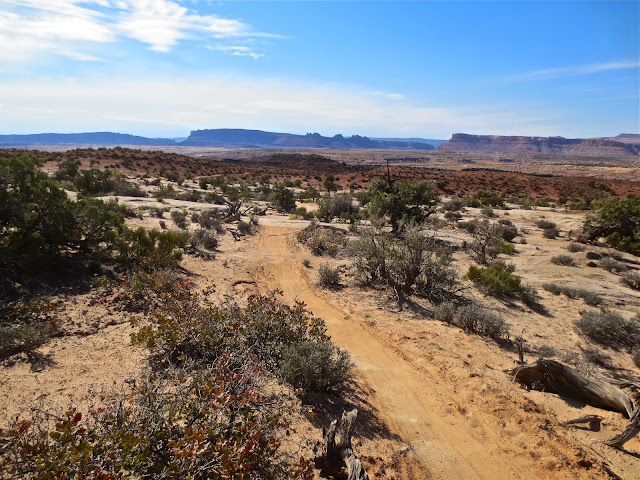 Boonie's derailleur malfunctioned on this course, but he was able to repair it enough to ride out. He's got bike skills, and tools :) 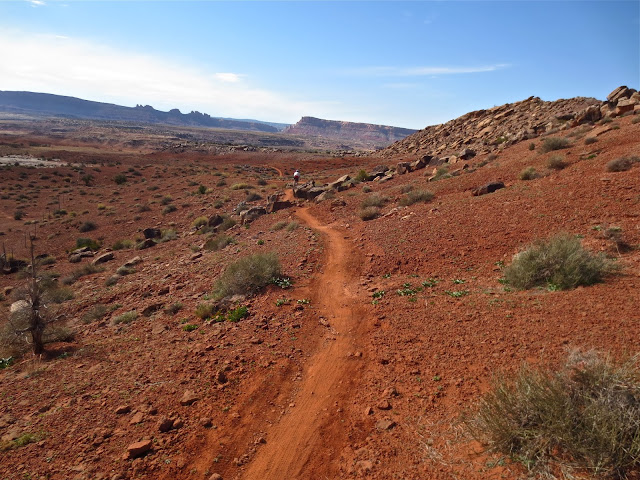 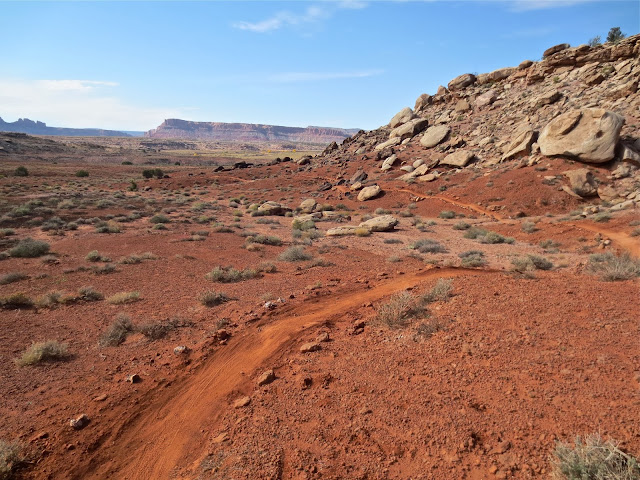 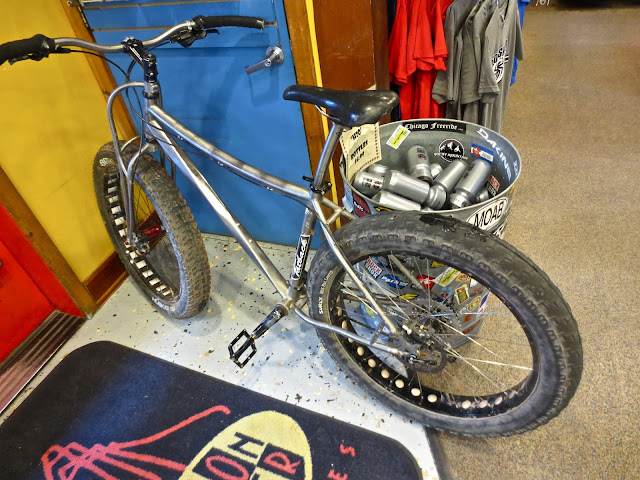 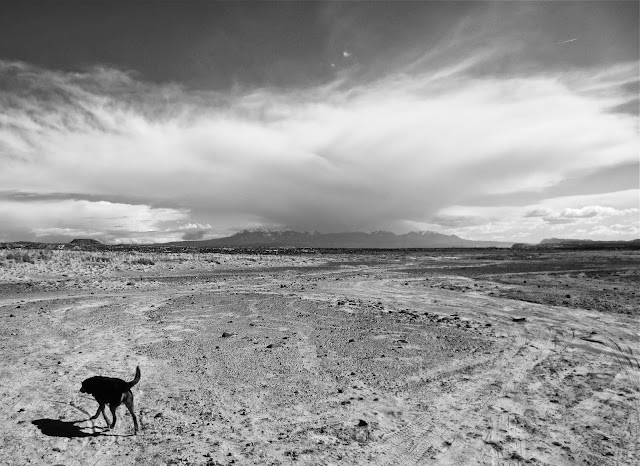 Winding down near Moab, this is the BCB gang wishing you a great weekend. Now go ride a bike :)
mark and bobbie
Posted by Box Canyon Blog.com at 7:24 AM