The Agony That Leads to Ecstasy 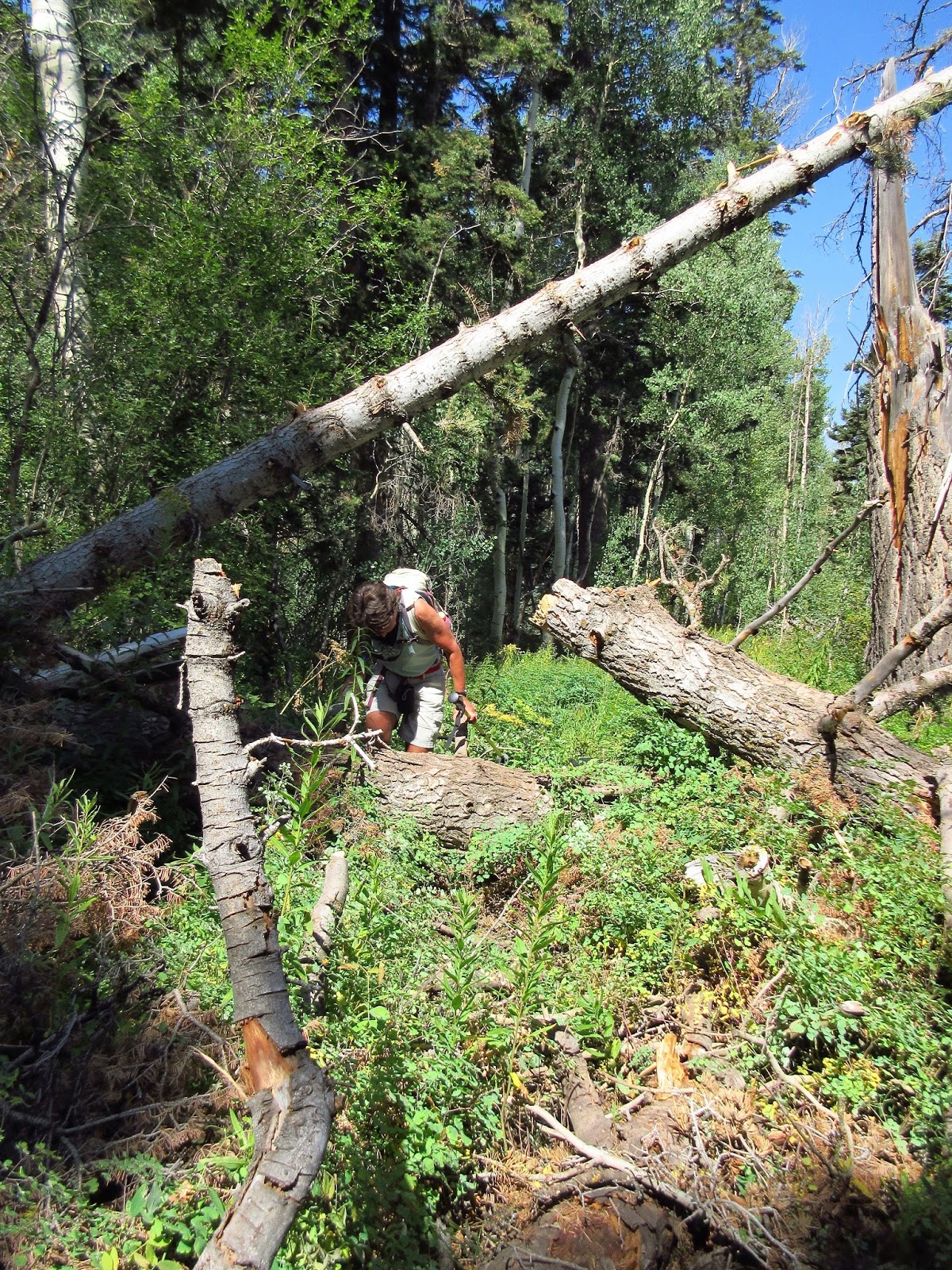 “To try to understand another human being, to grapple for his ultimate depths, that is the most dangerous of human endeavors.” Irving Stone, The Agony and the Ecstasy

Less than 40 hours after a 14,150 foot Sneffels summit, a hot full-sun day with temps forecasted to reach 85, two perfectly rational alpine hikers make the irrational decision to take on a nine-mile, steam-bath of a woods hike. Hashtag Heatstroke!

It came about due to procrastination over a hiking destination, one that led to not getting out the door till after 10 AM when it was already hot and humid and hazy from fires that continue to consume the West. Fires and Floods; Feast and Famine.

We hiked the mile to Silvershield's trailhead and immediately felt the effects of high altitude sun; a slow-roast on every square inch of exposed skin. Sweat is the body's cooling mechanism, but it doesn't work worth a shit in sticky, dead-calm air. In fact, it makes it worse.

Thinking legs had recovered from the Sneffels Summit, we chose what would be an ambitious hike for Geezers even on a cool day...a long, steep, loop-hike with well over 2,000 feet of elevation gain, up and over the ridge above Twin Peaks—the one that connects to Whitehouse Mountain—then down the other side via Oak Creek's drainage.

Right out of the gate Silvershield gets down to business; a switchback ascent up Lovely Ouray's Boxed-Canyon west face, nearly 90 degrees in angle to town, and directly in the smothering path of a rising-up-to-ruin-your-dayhike sun.

As if to further compound the "elements," Silvershield's vertiginous switchbacks are so loose that hiking poles are more necessity than optional. Amongst its thick brush and timber, there's less than a lotto's chance in Hell of catching a breeze. Legs soon wobbled with flatness, fatigued from overuse. A duet of second-guess mumbling arose from the un-dynamic duo: "We should turn around, get in the car, and go someplace higher...anywhere above timberline!"  But the un-dynamic duo pressed on...slower than a one-legged turtle and having about as much fun as passing a kidney stone.

In a little over a mile that feels like five, our loop bids Silvershield good riddance. We are now on one of those "less traveled trails," which is a romantic way of saying, unmaintained, so much so that we promptly mistake a game-trail for the route. Soon we found ourselves fighting through underbrush, over and under deadfall timber, clutching for sapling aspens in order to inch up a mountain-turned-MoFo monster. By hook, crook, and bushwhack—sucking down great quantities of ice-cubed water from hydro-pacs—we manage stumble onto a bench where, of all things, we re-find the "trail" (such that it is...a mere come-and-go part in the undergrowth). Not three miles into the nine mile hike, over half of our water consumed, rationing protocol goes into effect. 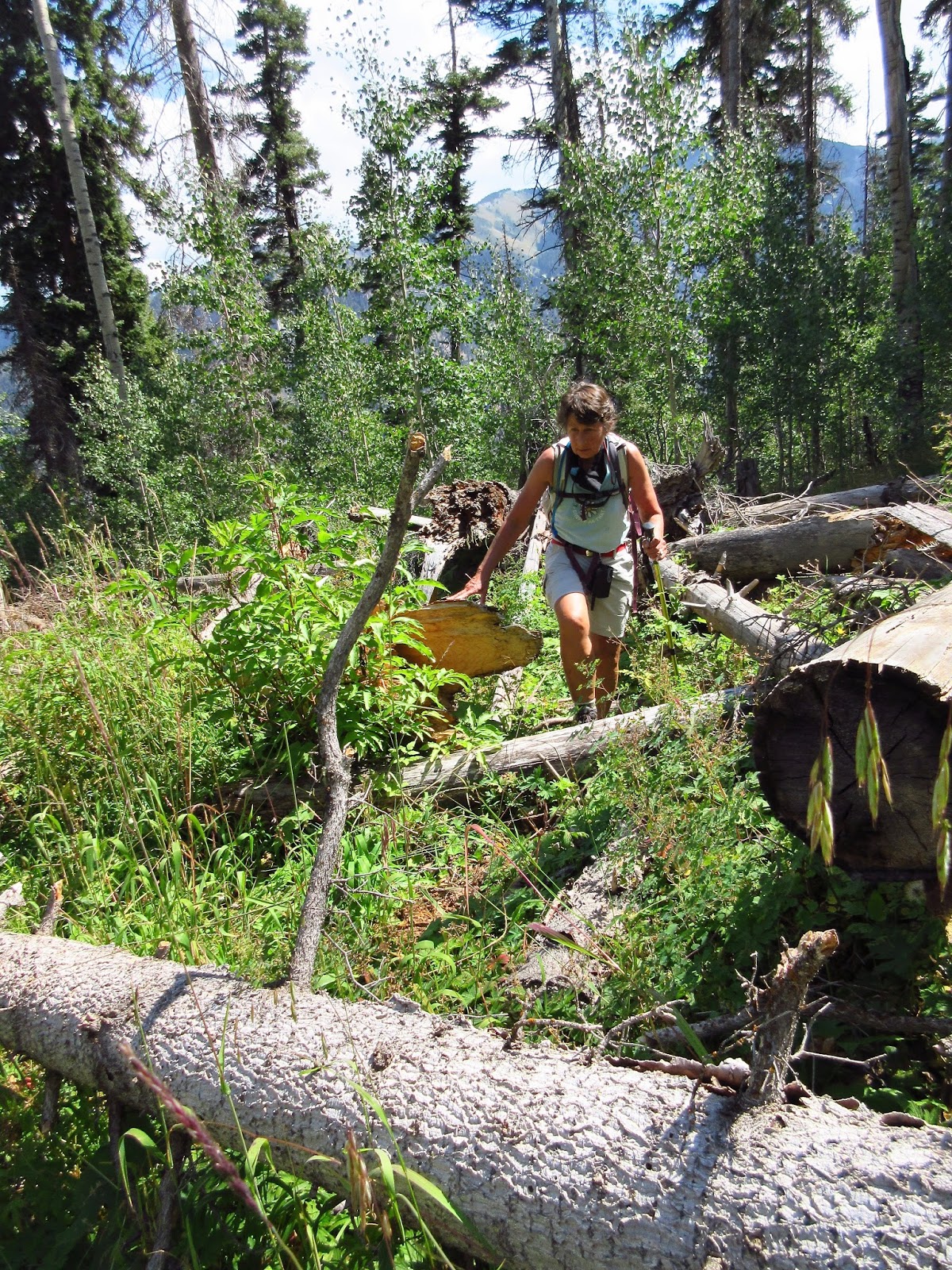 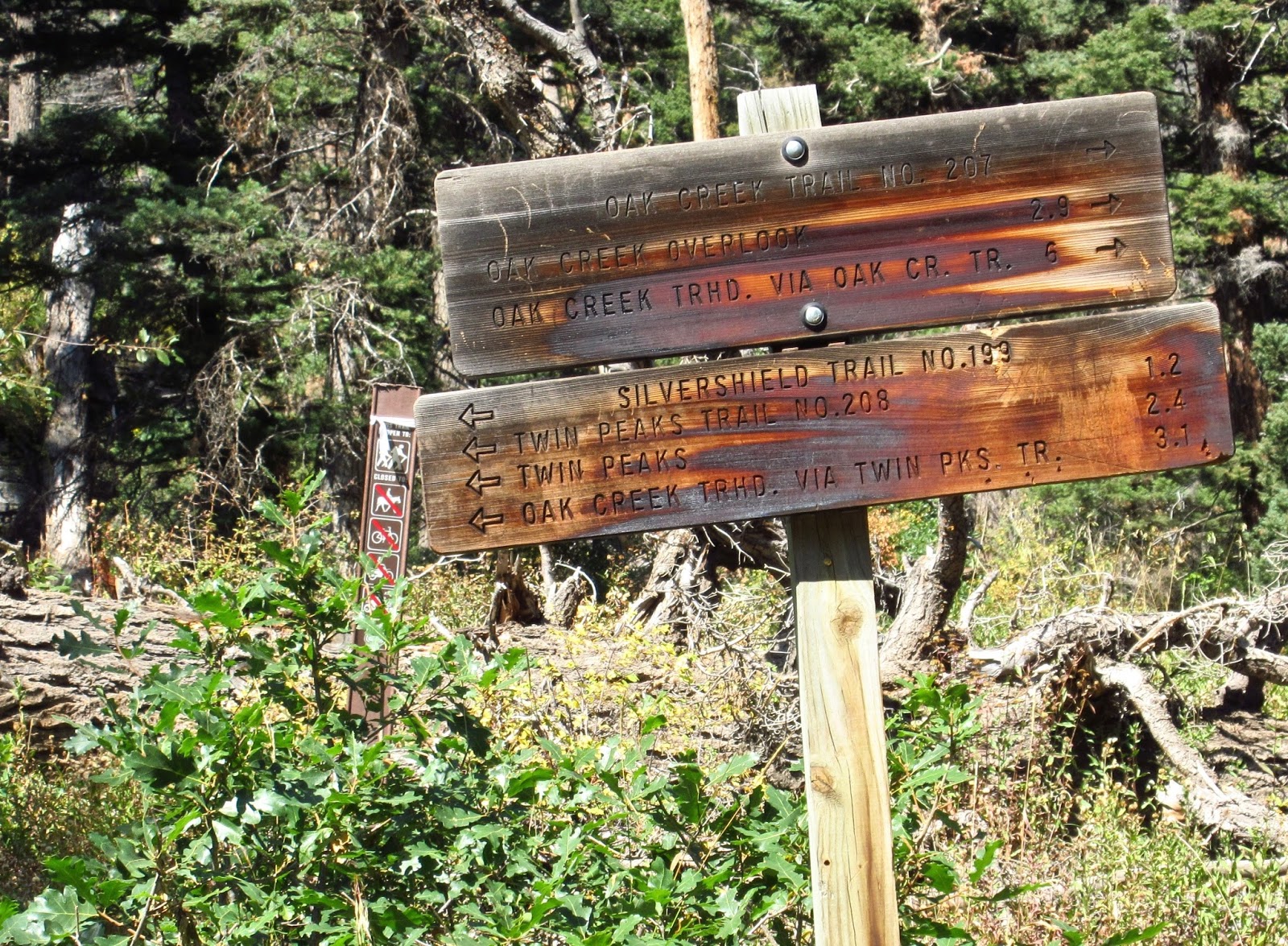 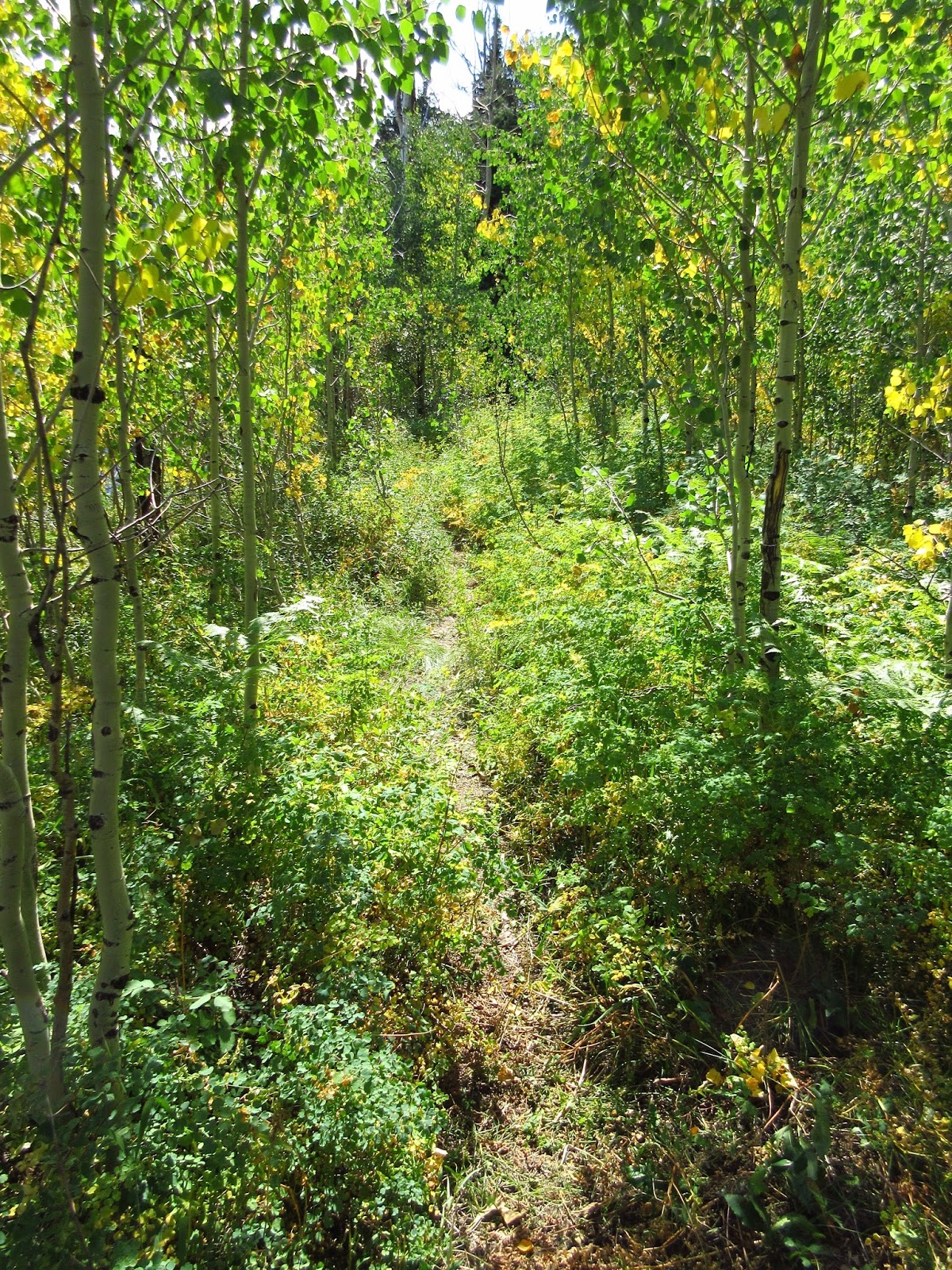 Somewhere, very likely over the rainbow...of which there are none, lies a pass that will turn this wretched, well-lathered aerobic bushwhack ascent into a lengthy downhill pain-in-the-knees plod. Oh goody, something to look forward to....

Sweat continues to pour as we labor up toward the ridge line; deadfall as unrelenting as the ascent. Some quick math reveals we are averaging a paltry and disheartening 1 mph. Stops are frequent; water all but gone; Cheer has been officially placed at the top of the "Endangered Species List." There was more joy in Mudville when mighty Casey struck out than on that mountain. 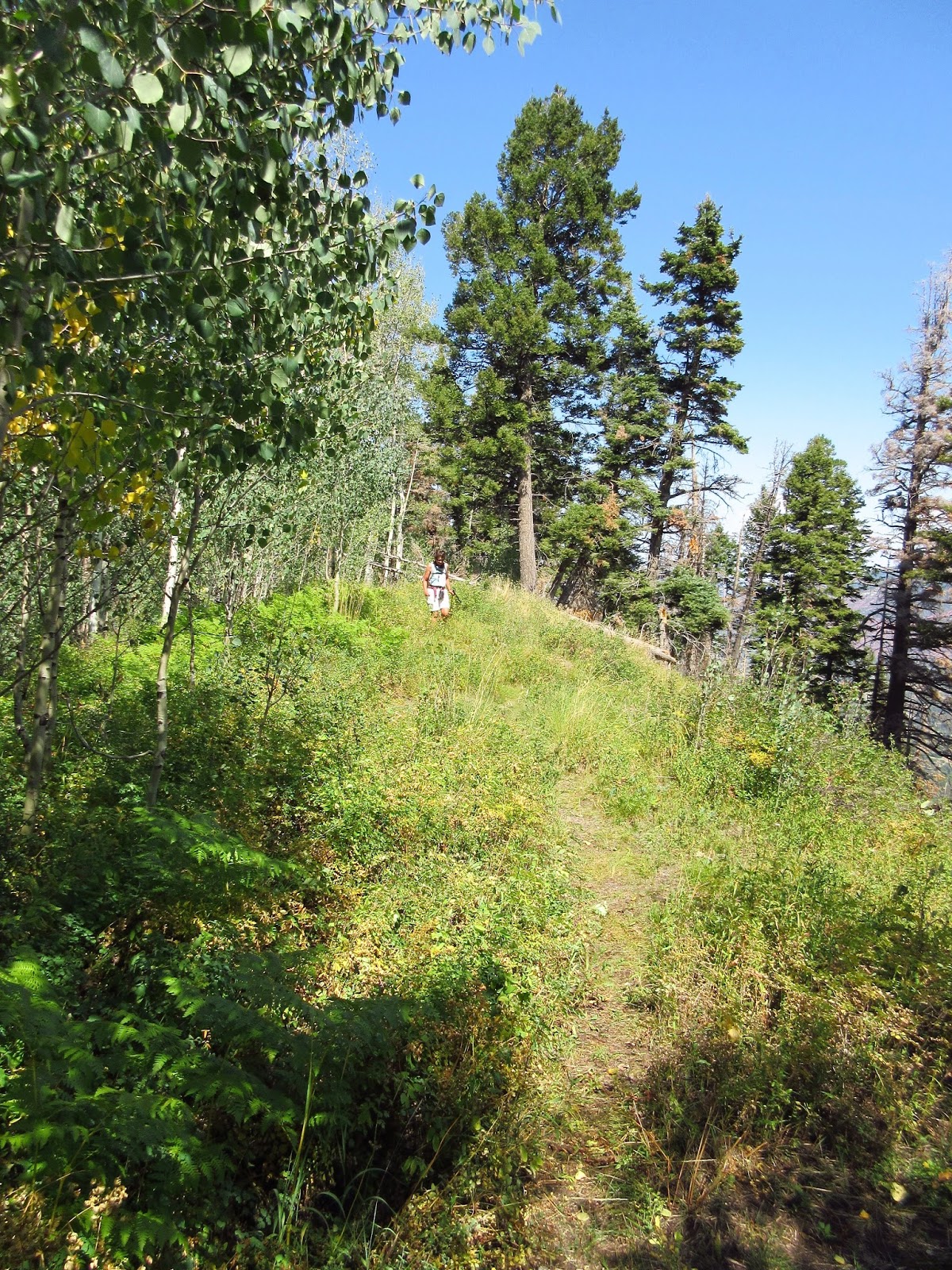 It's always darkest before the dawn, we are told. And it was a truth for a duet of weary, dehydrated Geezers on their last leg. We pledged matching tattoos of that lame aphorism as reminders to never, ever re-engage a bushwhacking "fucking woods hike" on such an unkind day...particularly on the heels of a 14'er summit. Fuck Thoreau, Emerson, and Frost...fucking fair-weather, sea-level hiker/poets. The walk through this woods would kill the lot of you.

At the last minute of the last hour of reserves, on the apex of dismay, deadfall relents. Light shines through yonder window between the trees. An open meadow! A breeze bends knee-high grass! Angels singing!

The ridge is made; it's all downhill from here to beer. Spontaneous fantasies break out: ice-cold well-hopped brews; peaches, sweet, sweet Palisade peaches...in the fridge right next to the beer; long, cold showers. 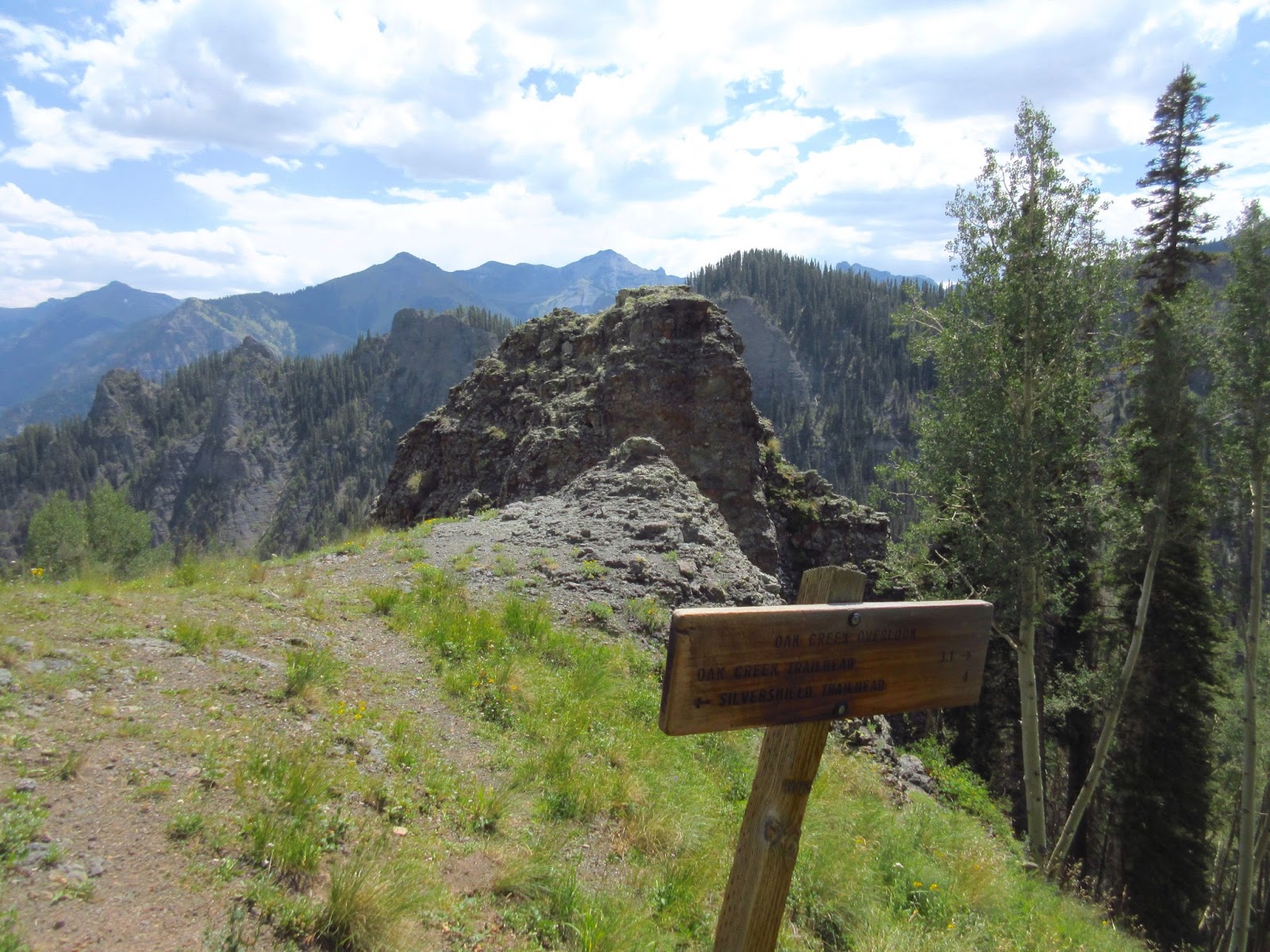 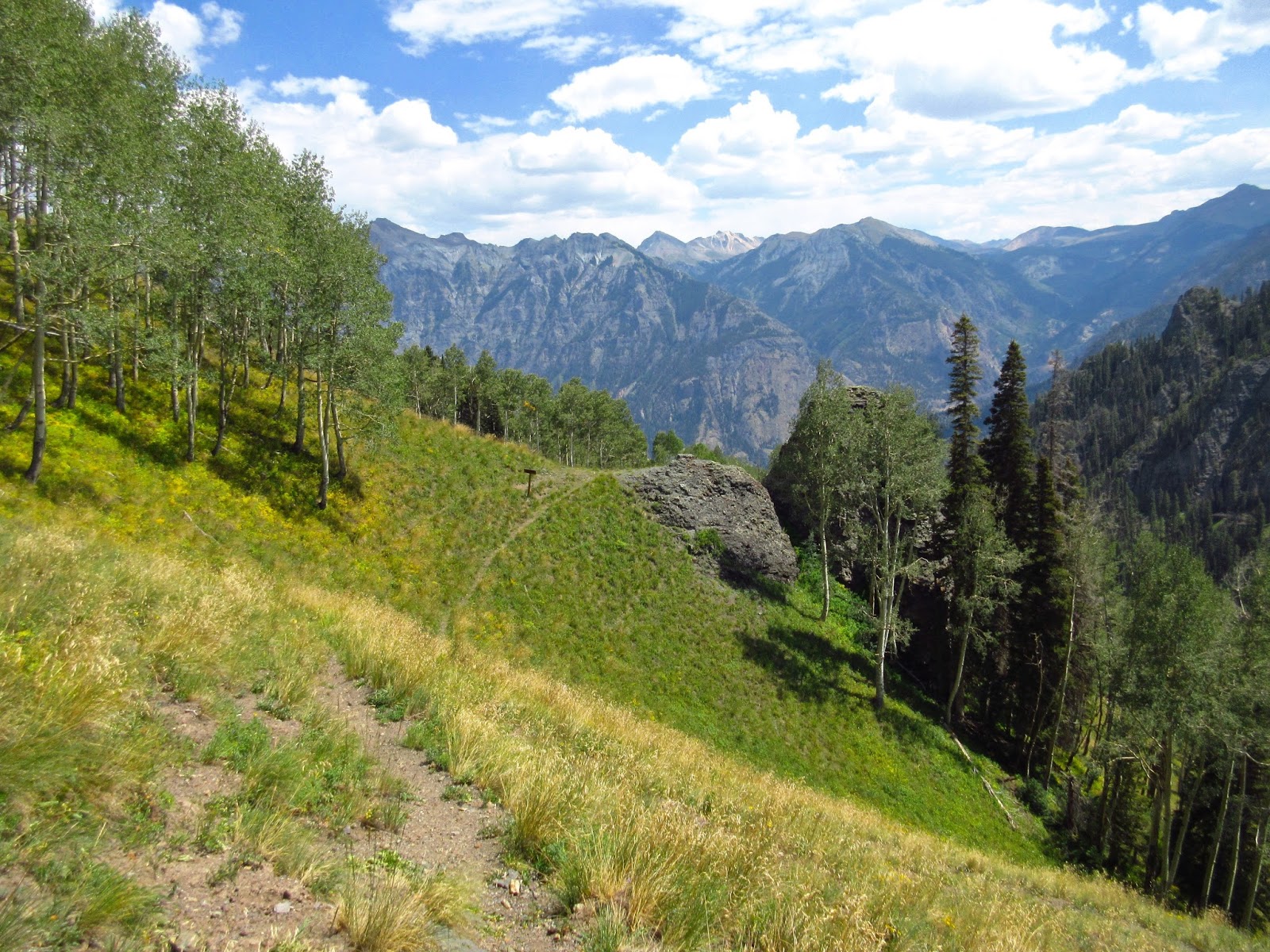 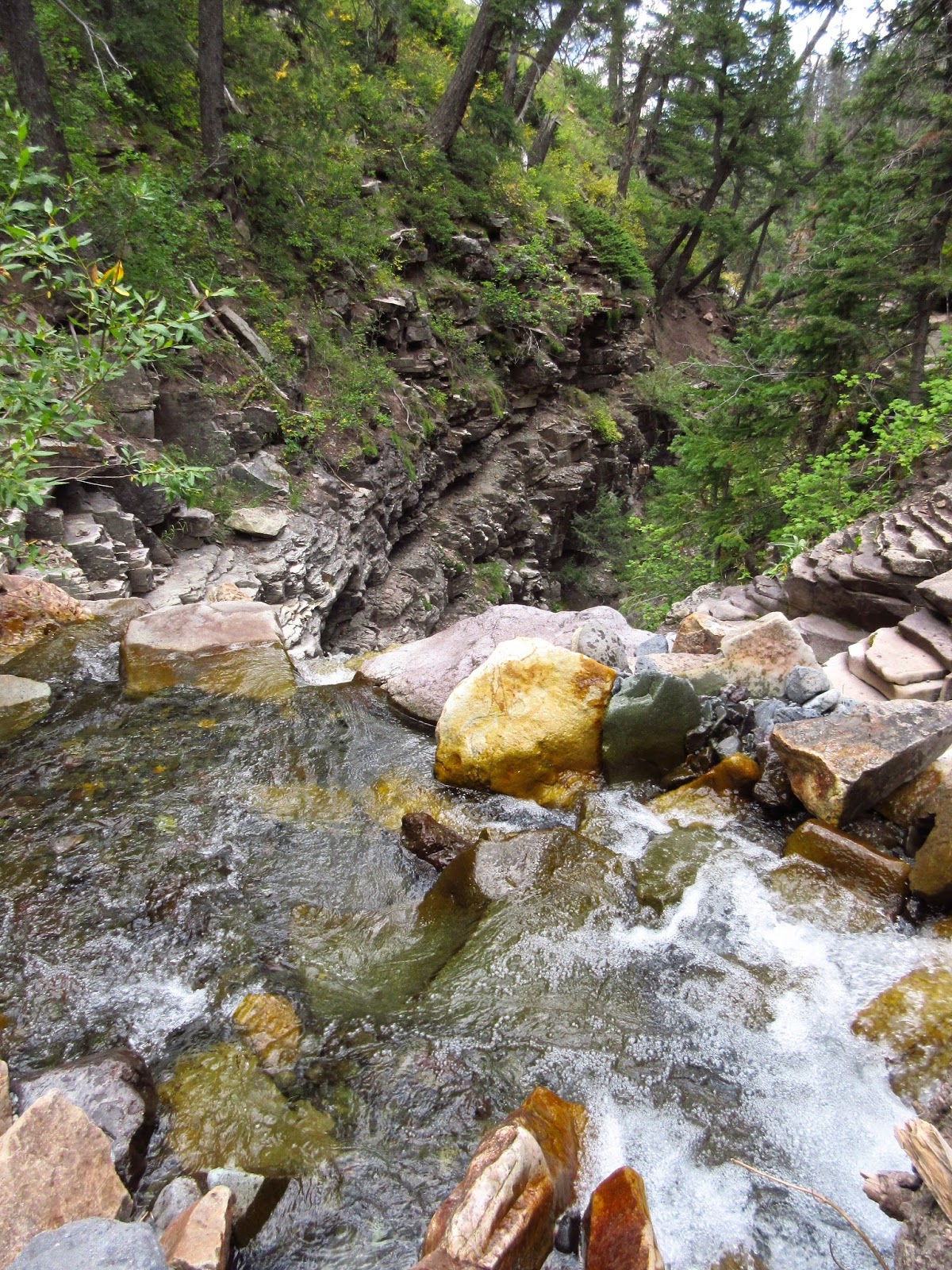 Oak Creek Canyon arrives like an oasis in the Sahara...cooler by 20 degrees... water so cold it burns. But for lack of sleeping bags, a camp would have been made. But beer and peaches call from the fridge. Another dip of the "Life is Good" ball cap into the Oak Creek's ice water, followed by a sling to the head. An ice-cream headache ensues: HOLY JEEEZZZUSSSS! 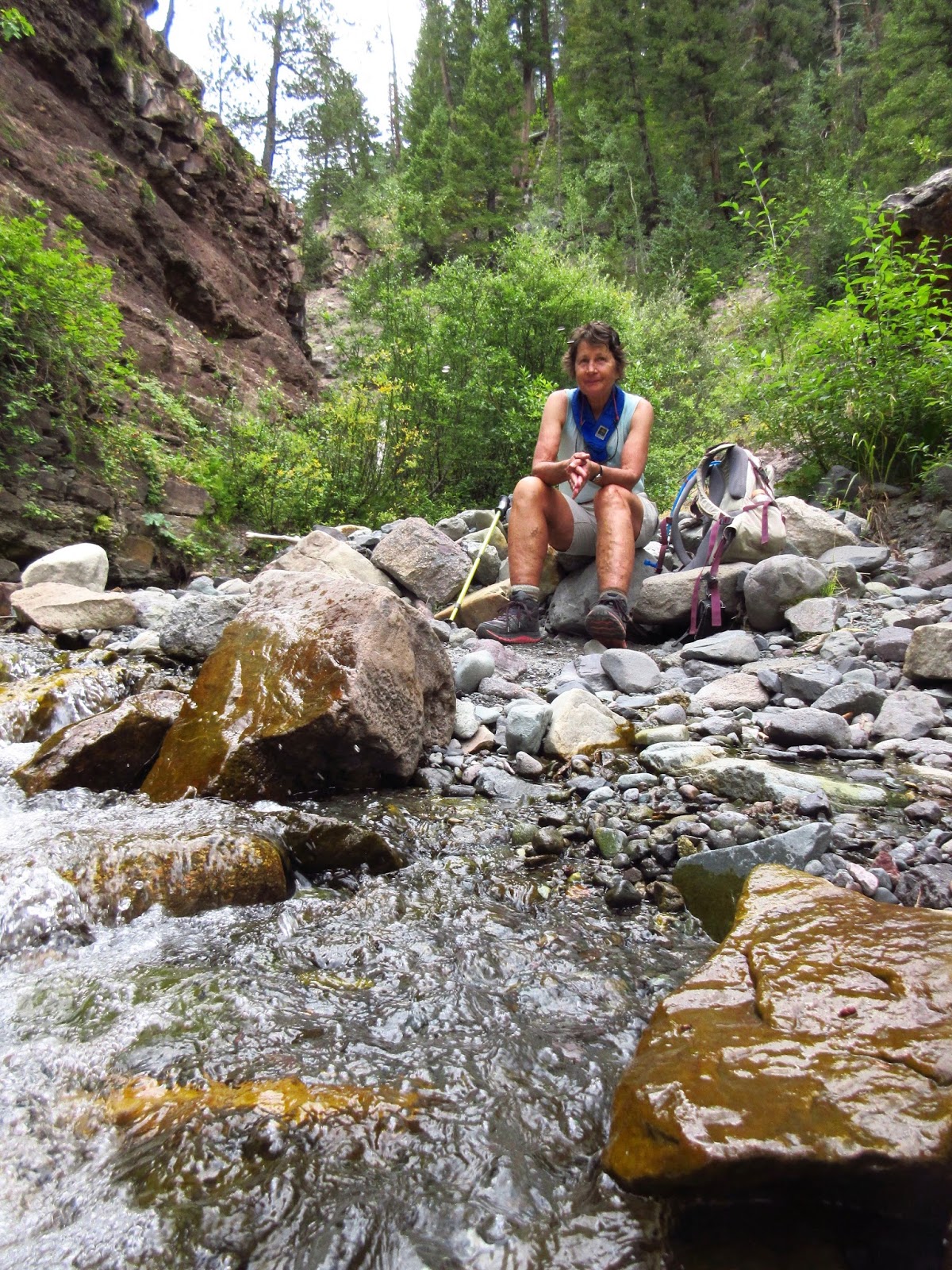 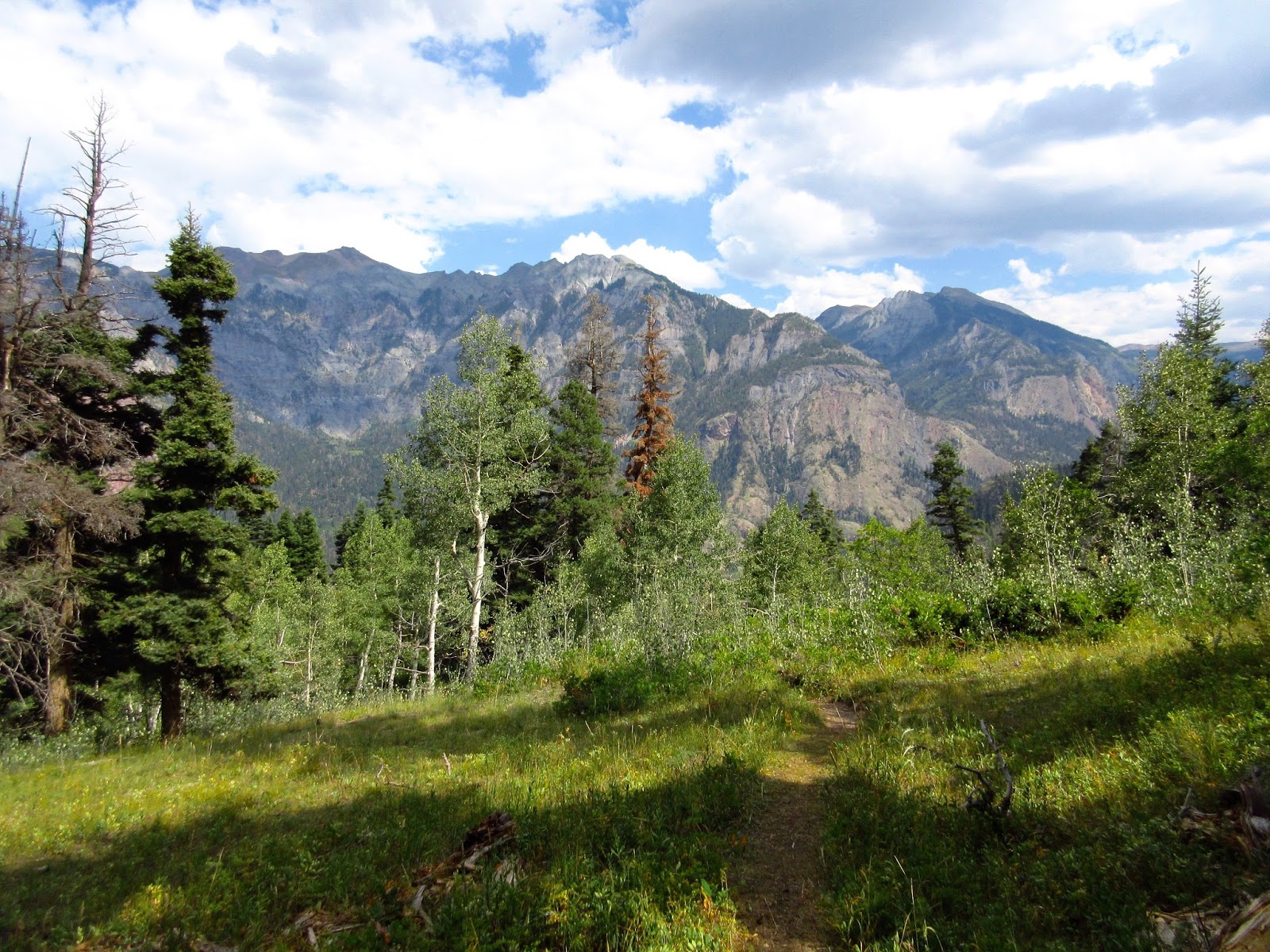 With miles and miles to go before they drink, thoughts are set free to pass time. It take minds off pain welling up in feet and knees.

It's peculiar, the darting flights of fancy thoughts take when finishing off a torturous downhill plod on Autopilot. The mind flits from food to beer to Déjà Vu moments, back to food, then beer...sweaty bottles of liquid reward. Is Life really good? Thoughts take a soar over death. Flames of Hell lick my feet, so it's back to beer, ice cold Hop Nosh, Utah's finest, a hop-festive 7.3 % alcohol that provides the perfect buzz that falls just short of a DUI, but long enough to add another layer of goodness to Life. Sometimes, anticipation is better than the reward itself. I wonder if I will be let down by my Hop Nosh moment...if I will nod off and sleep right through the buzz? 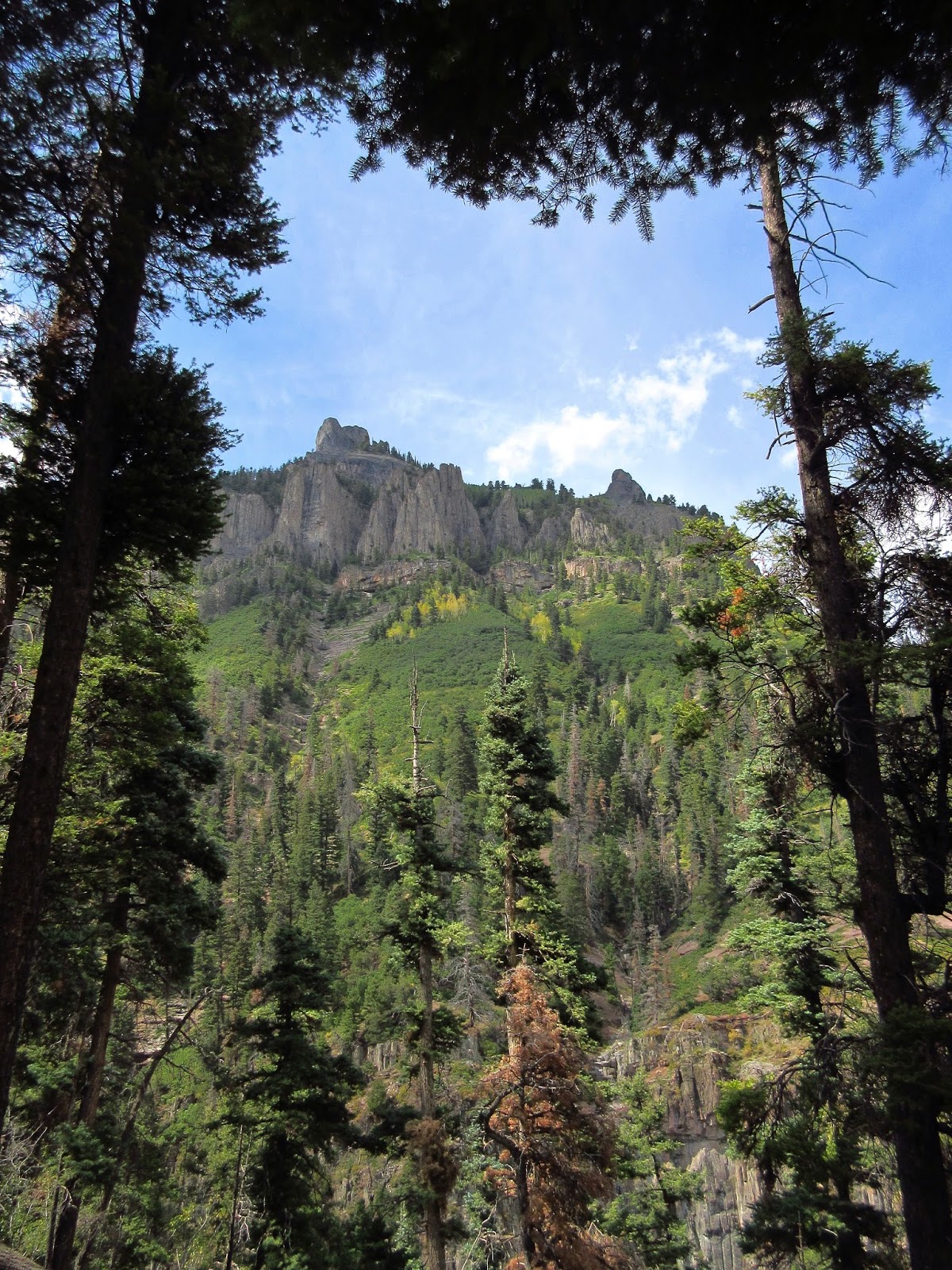 Then, oddly, when the end of a tortuous woods-hike is almost behind us, a wave of ecstasy slowly begins to displace the agony. The horror, profanity, blood, sweat, and tears fade with every step. The finish line is within reach. "15 more minutes," I say to Bobbie, "A tad over 6 hours."

Though it was an utterly negative experience, one never-ever to be repeated, we are strangely proud... a "fucking woods-hike" becomes an "accomplishment." It's hard to explain. Perhaps it's analogous to women and childbirth, a phenomenon where memories of blood curdling pain from tearing flesh, basically on par with passing a 10 pound poop, are suddenly erased by the long awaited "accomplishment." Before they know it, those same women who swore "never again" and "don't you dare touch me with that thing," are peeing on a stick and hoping it turns pink.

Thus, no doubt, we will find ourselves at the trailhead of Silvershield again someday...eager to embark on a glorious loop-hike. It's like the old joke from childhood where one guy asks another guy why he keeps hitting himself on the head with a hammer: Because it feels so good when I stop. 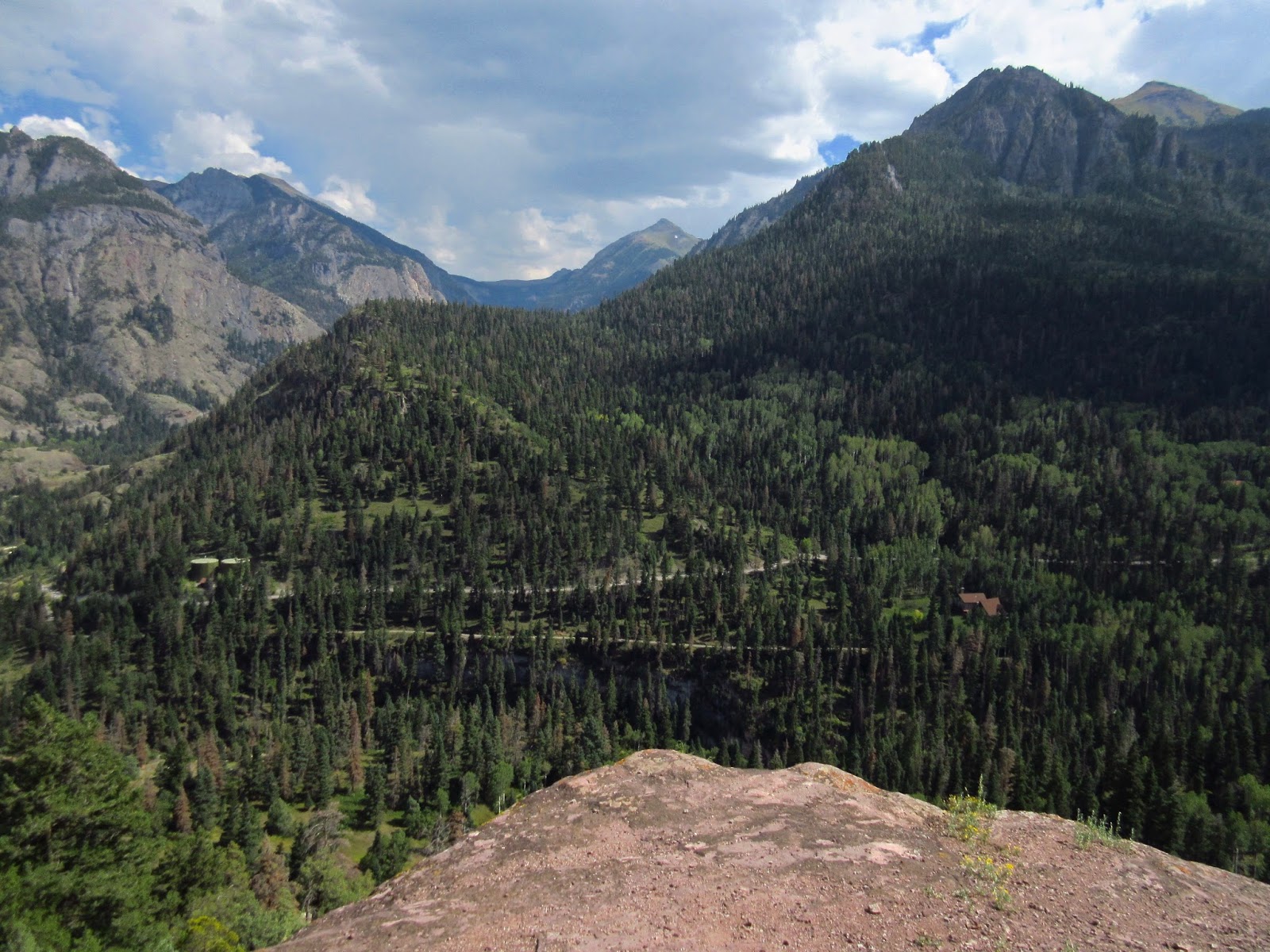 Posted by Box Canyon Blog.com at 8:03 AM