In Search of Thin Air: Chance and Challenge on High 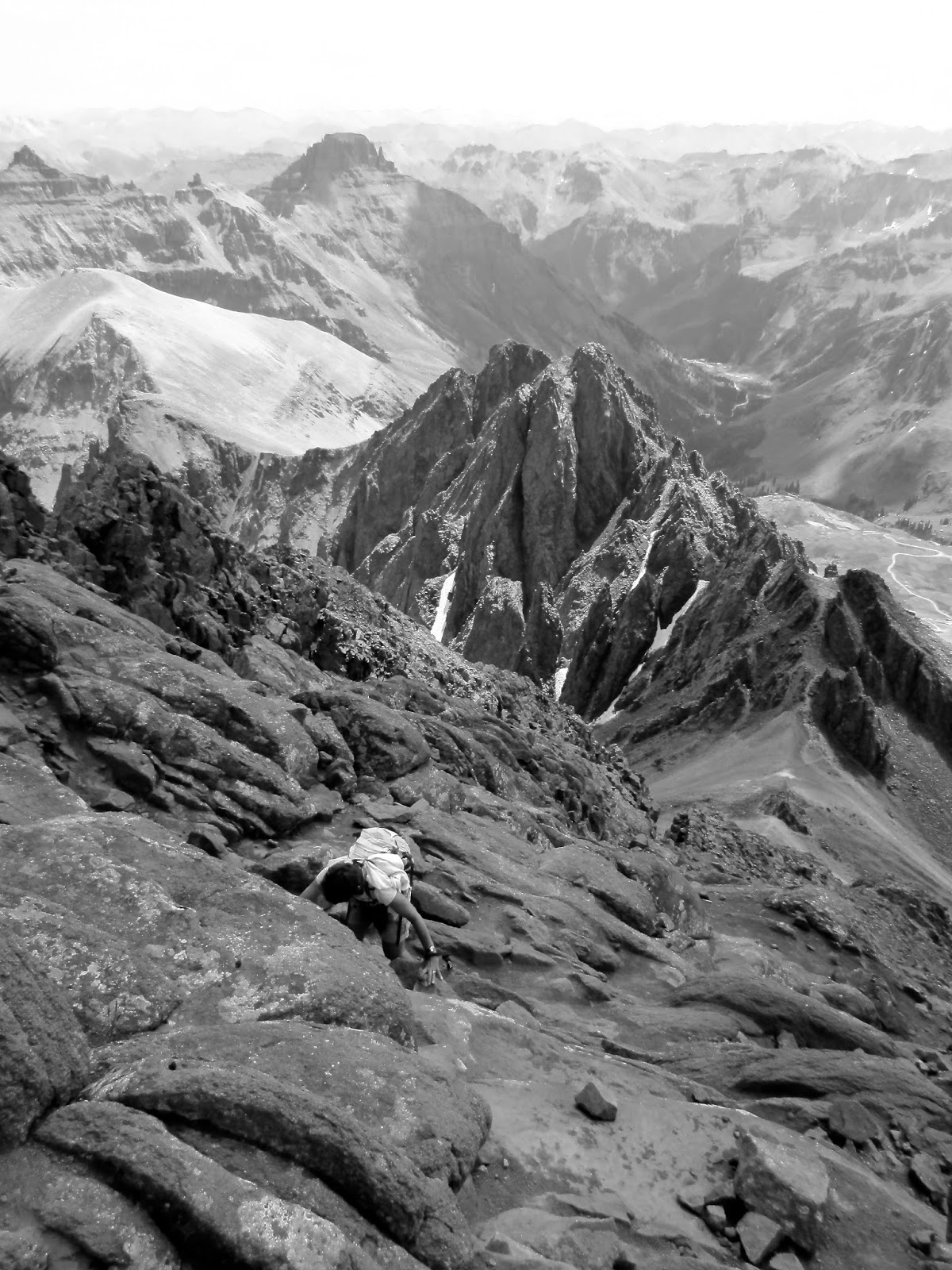 
We're so deep into August it's almost September. Snow has been vanquished by sun and warmth from all but the deepest, darkest north-face recesses of mountains. Kids are all but back at school, while parents slave over cluttered desks with one eye on the clock. Hell, you can even find a parking spot on Main Street, Ouray.


The earth's axis yaws toward winter. Forests of Aspen wane from juicy summer green to anemic pre-fall celadon. Chlorophyl is sluggish, weary from the season of growth. Darkness lurks in shadows that lengthen by the day. Nights grow longer. Local bears are on a feeding frenzy. Who needs a calendar? It was sudden, as if sensing urgency, Bobbie, a veteran of fifty 14er summits, blurts off the cuff, I think I want to attempt Mount Sneffels...you know, just to see if I still do it.

The ensuing discussion reveals that its been 20 years sense she last summited Sneffels—though 10 years ago she reached the upper couloir while guiding nephew Brent and niece Anita. Unfortunately, they were turned back deep snow and ice. 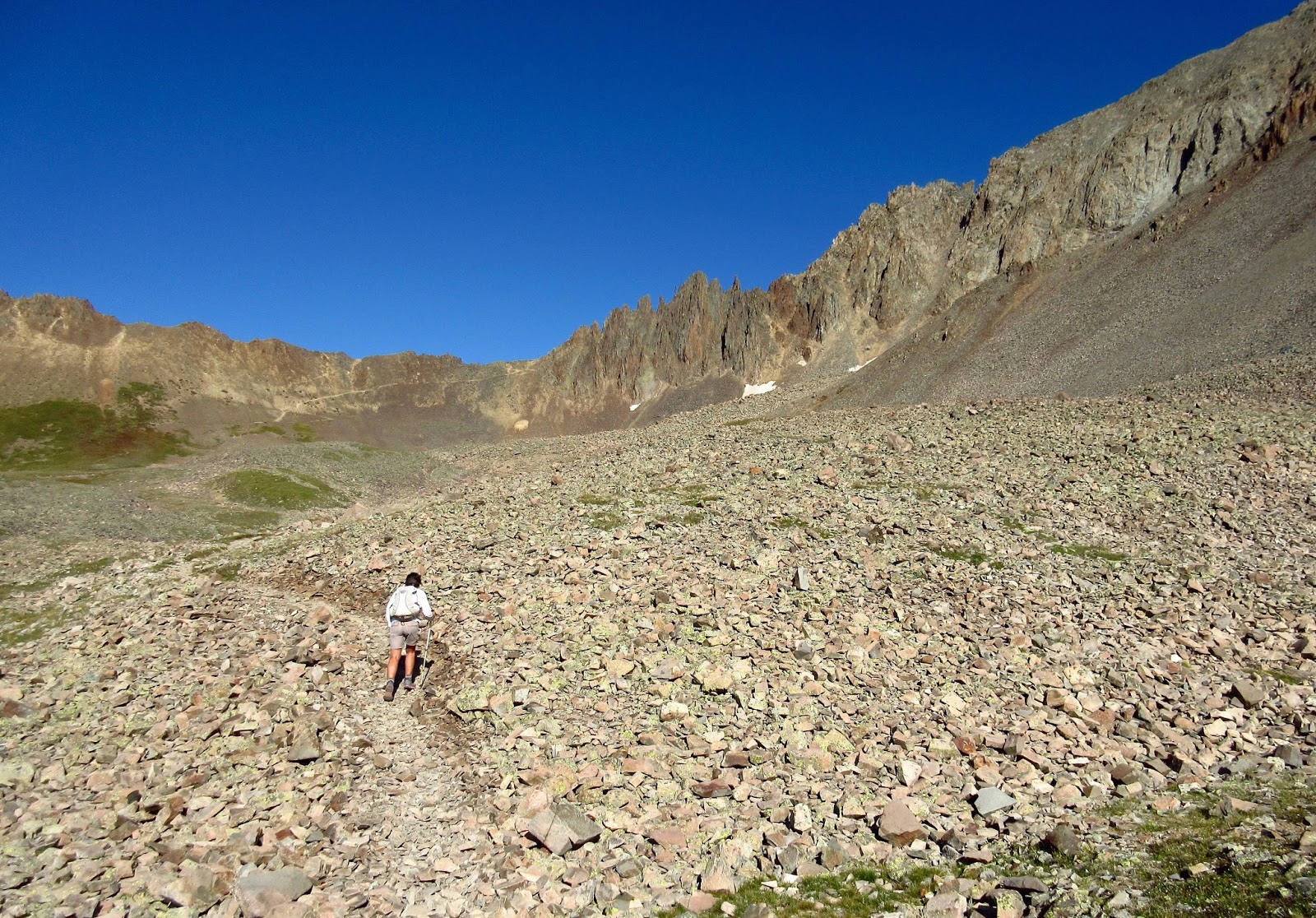 So Monday rolled around bright and pretty as a new copper penny. Not a single excuse can be found; the forecast is good, snow's gone from the approach couloir, and we're not getting any younger. Yikes! Butterflies suddenly decide to go for a swim in my morning coffee. I take a couple Rolaids to settle the ruckus, and pull on my boots. 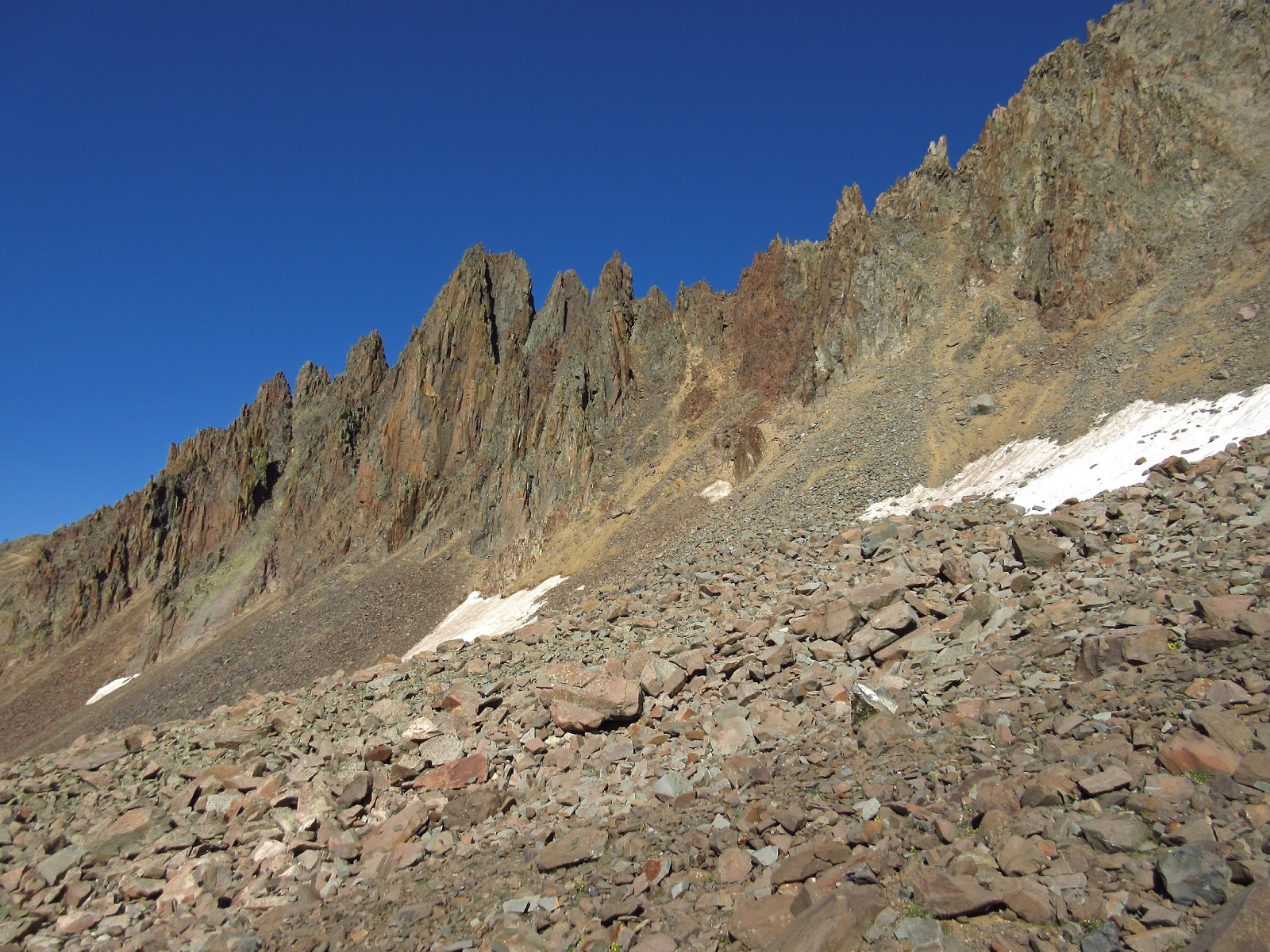 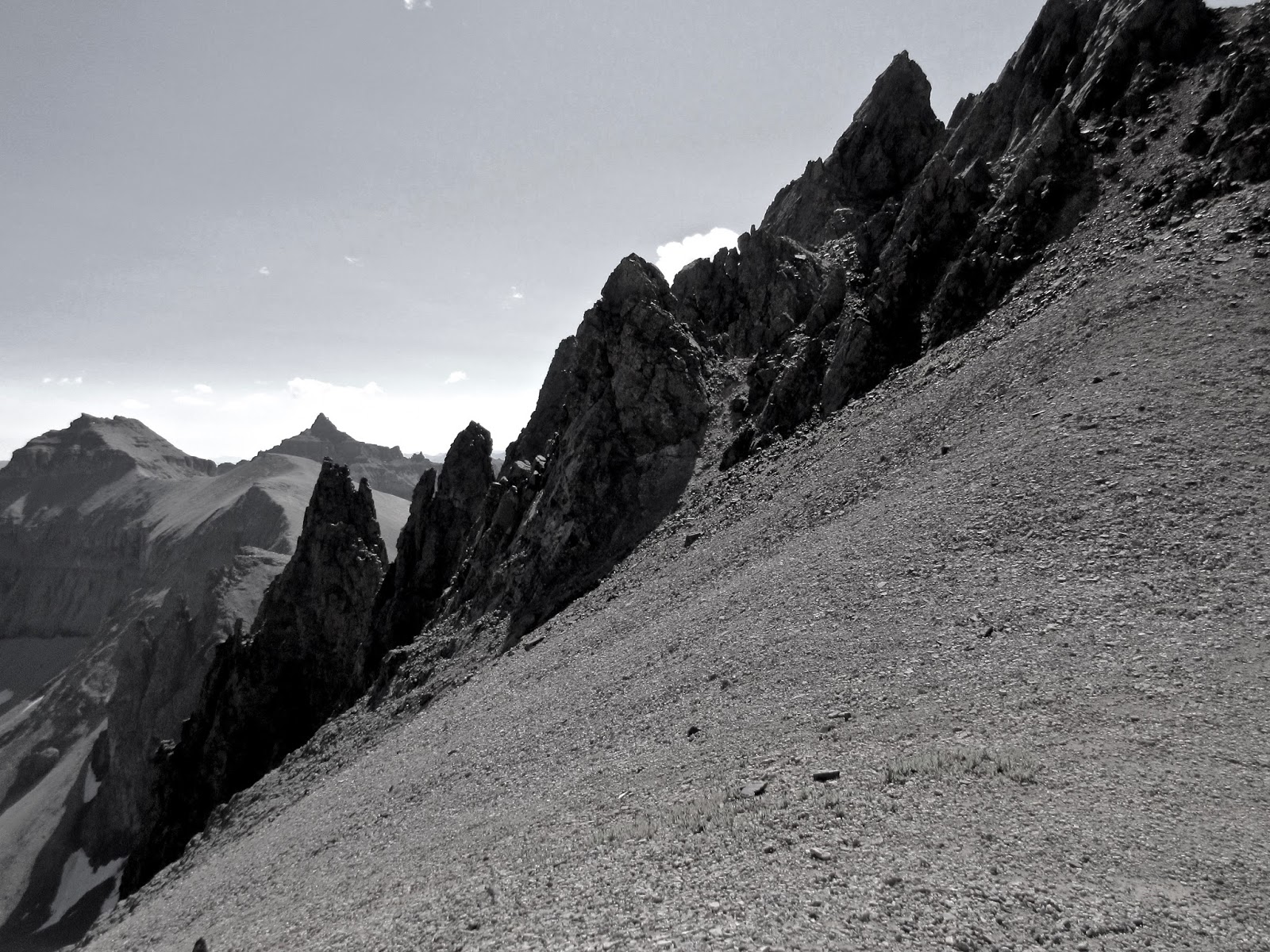 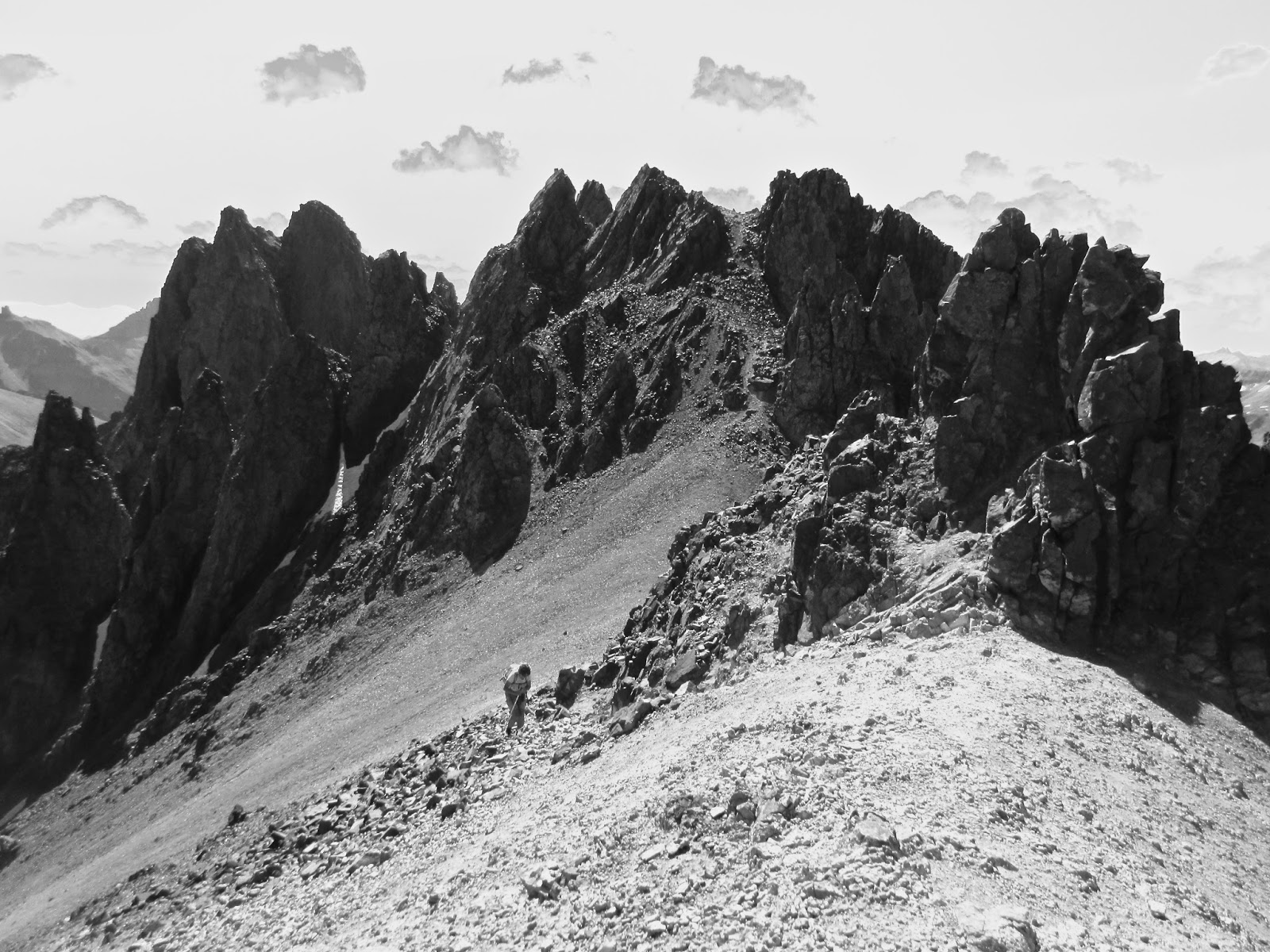 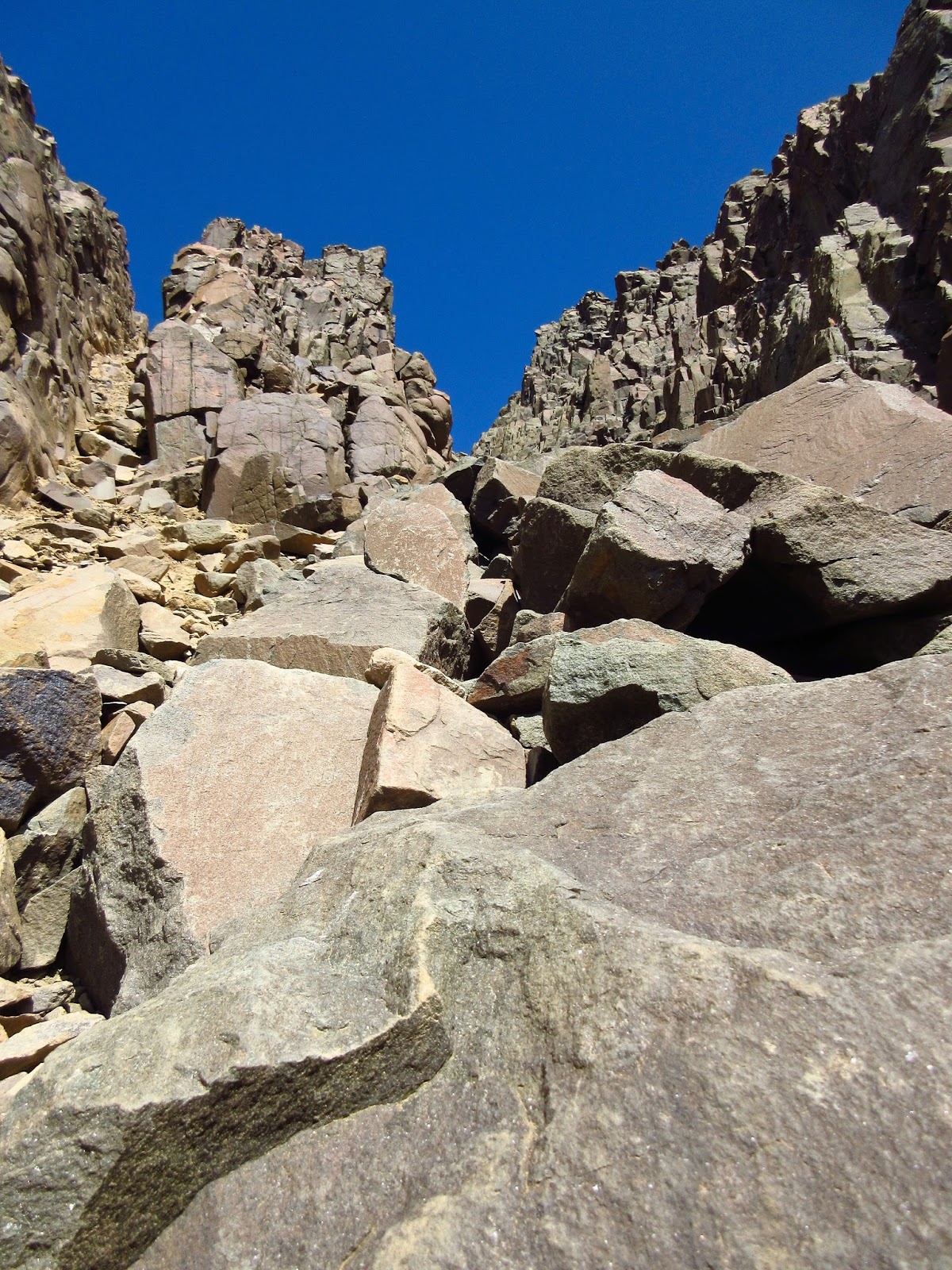 Thanks to gravity, the eroding effects of winter snow, plus wear and tear from a gazillion climbers every summer, most of the boulders in the upper couloir have moved downward. What's left is loose, traction-less footing in the steepest section. Erosion is worse than either of us remember. Then again, it's been 20 years. What would one expect... 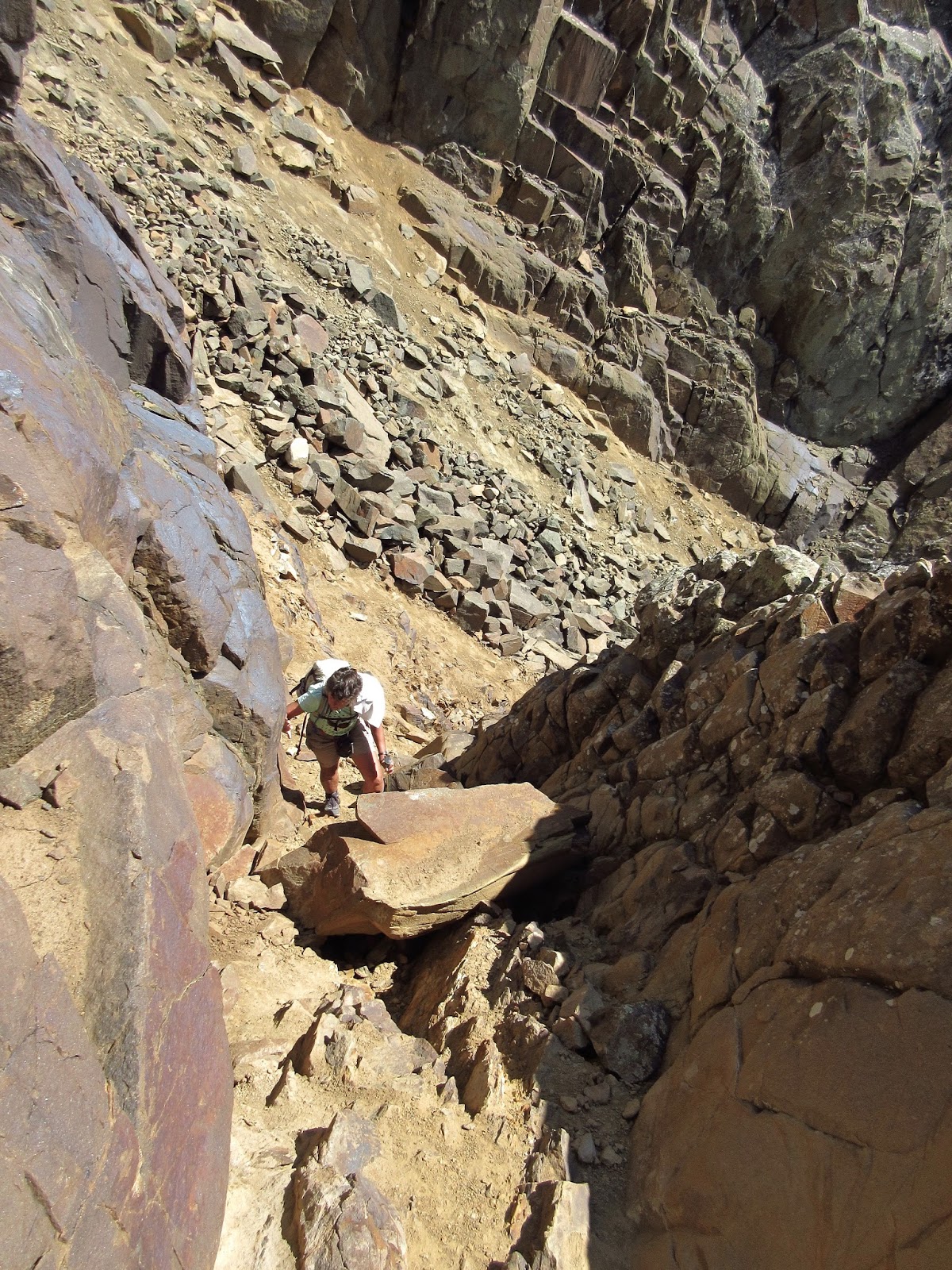 In early summer last year I solo-ed Sneffels. The approach couloir was still filled with hard-packed snow and ice. I popped out onto the south ridge, which had less snow, and was able to summit. Though a little "airy," it was easier than fighting the standard approach's erosion and poor footing. 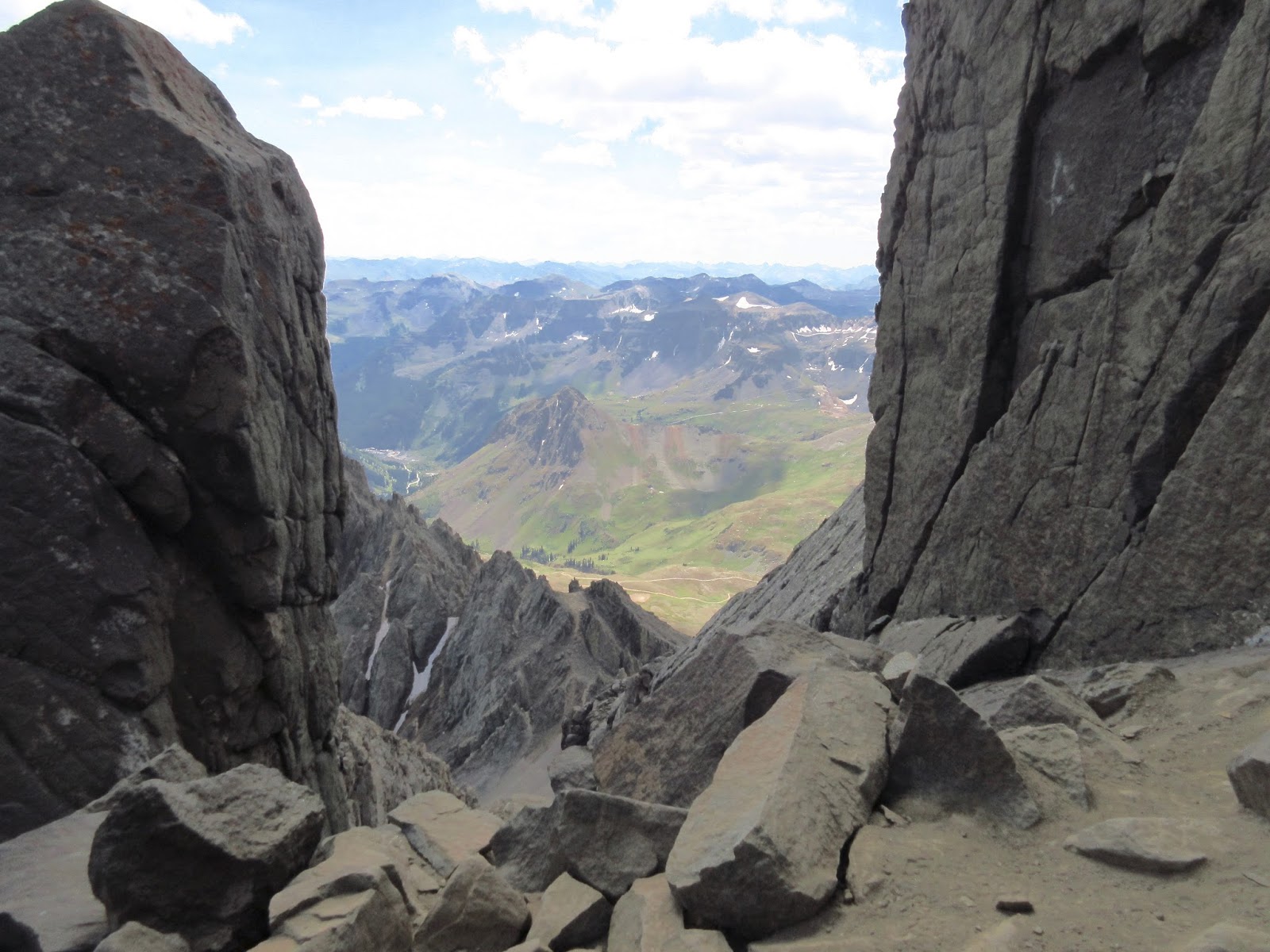 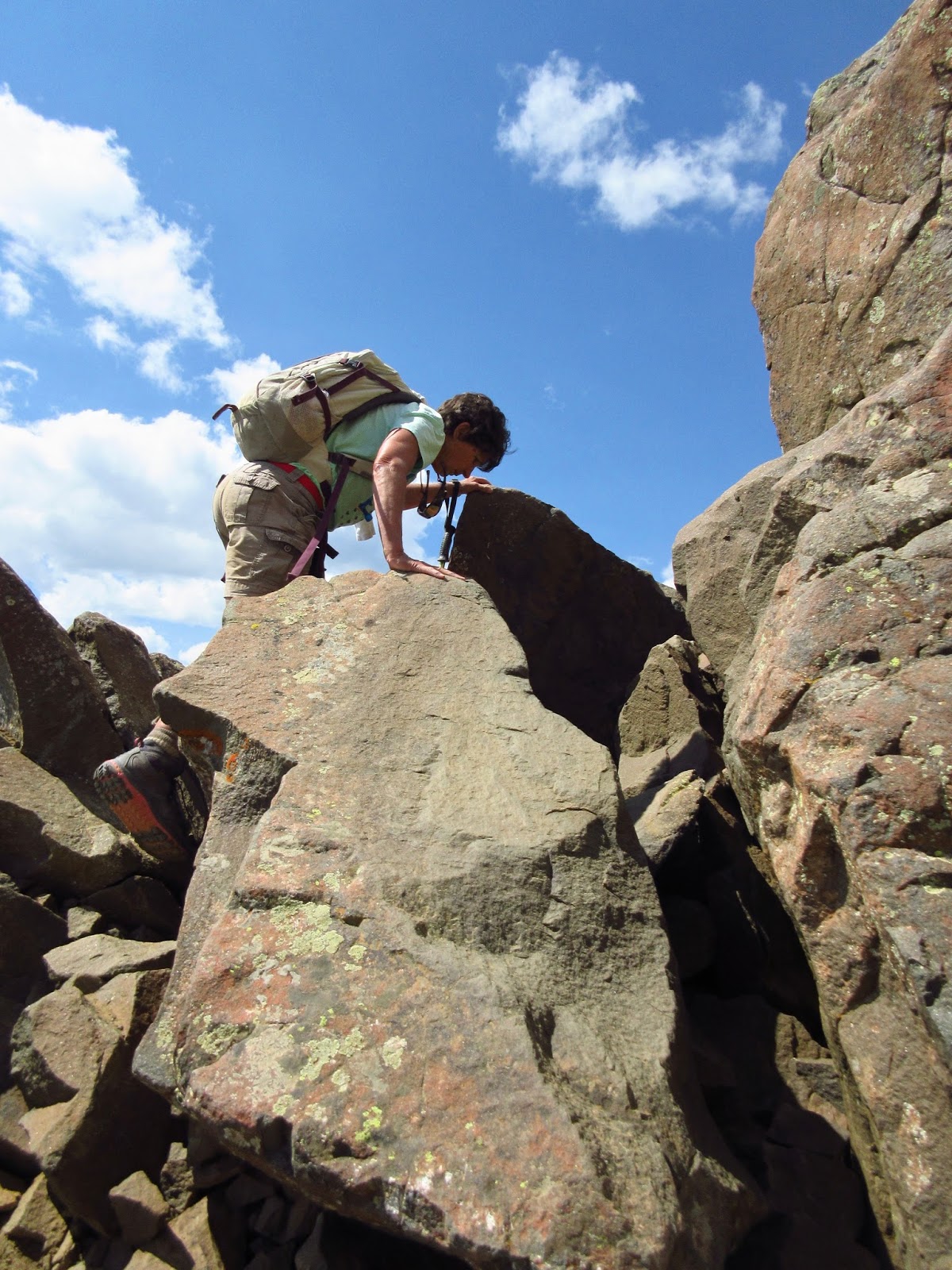 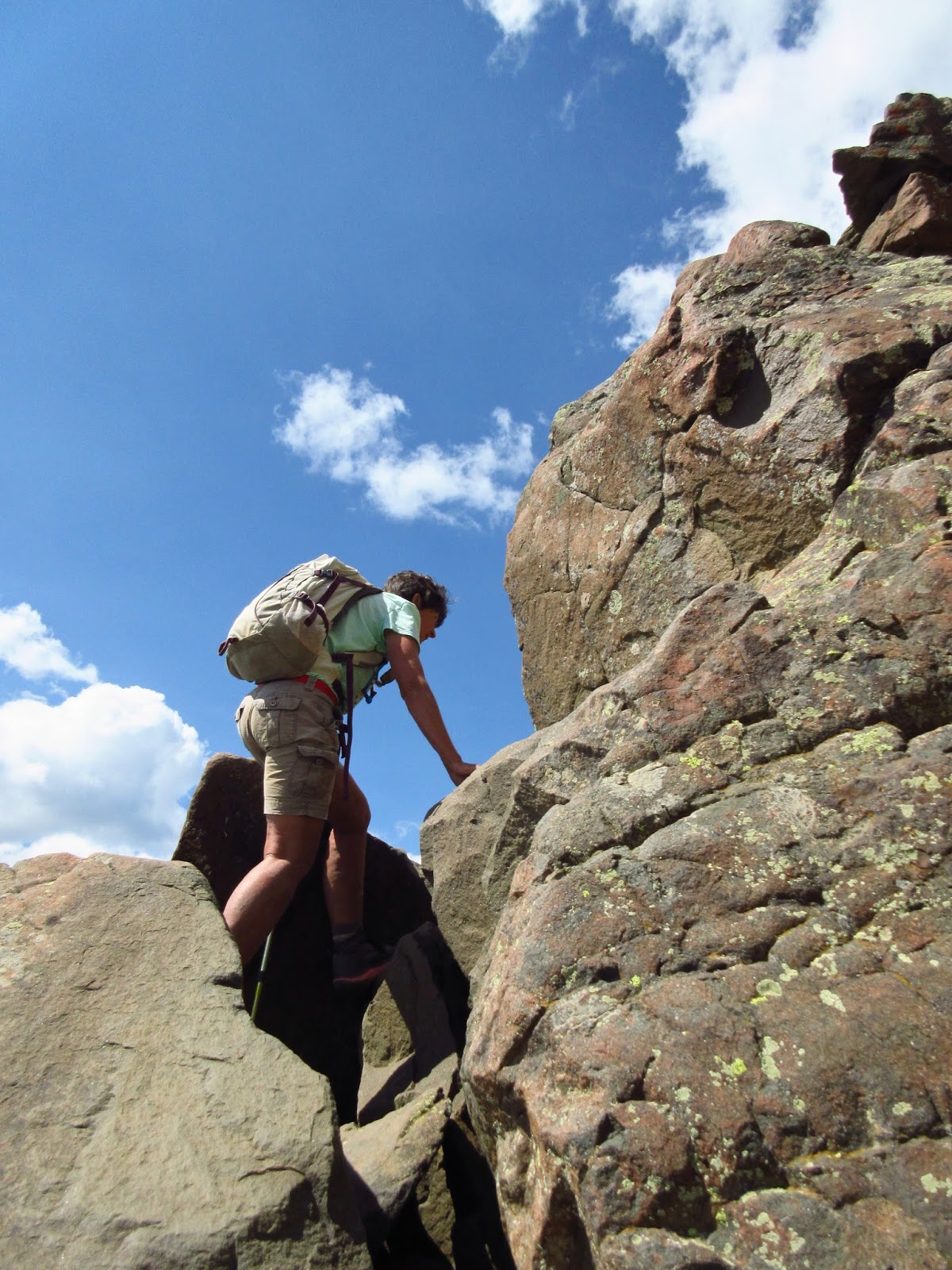 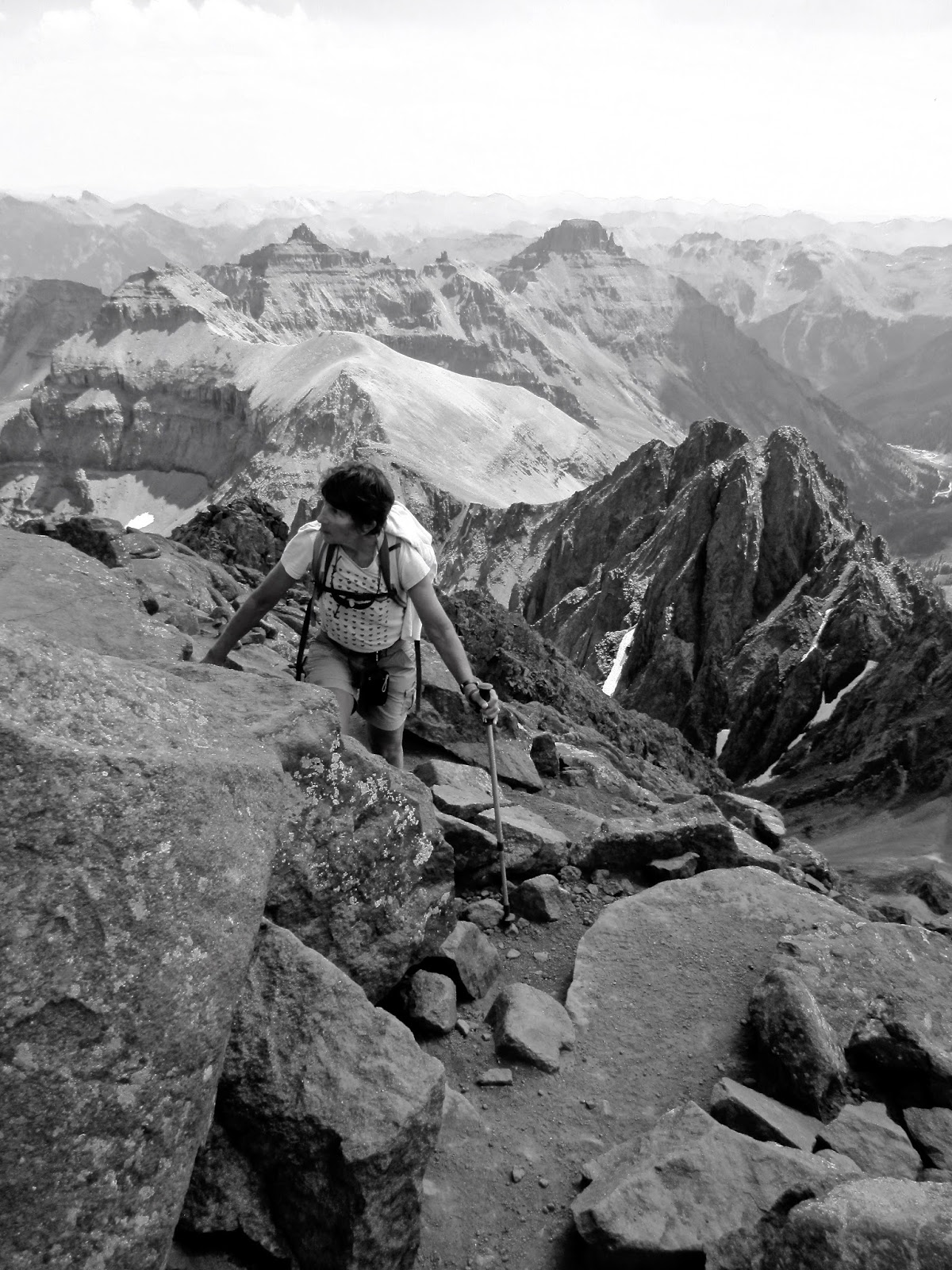 I left a little "skin" on the mountain shimmying up through the "keyhole."  It had eroded away similar to the rest of the route, leaving a much bigger step, and, worse, a considerably smaller landing zone on the way back down. Could use a rope there, for old Geezers on Eliquis :)  Sorry, no photos...we both had our hands and legs full... 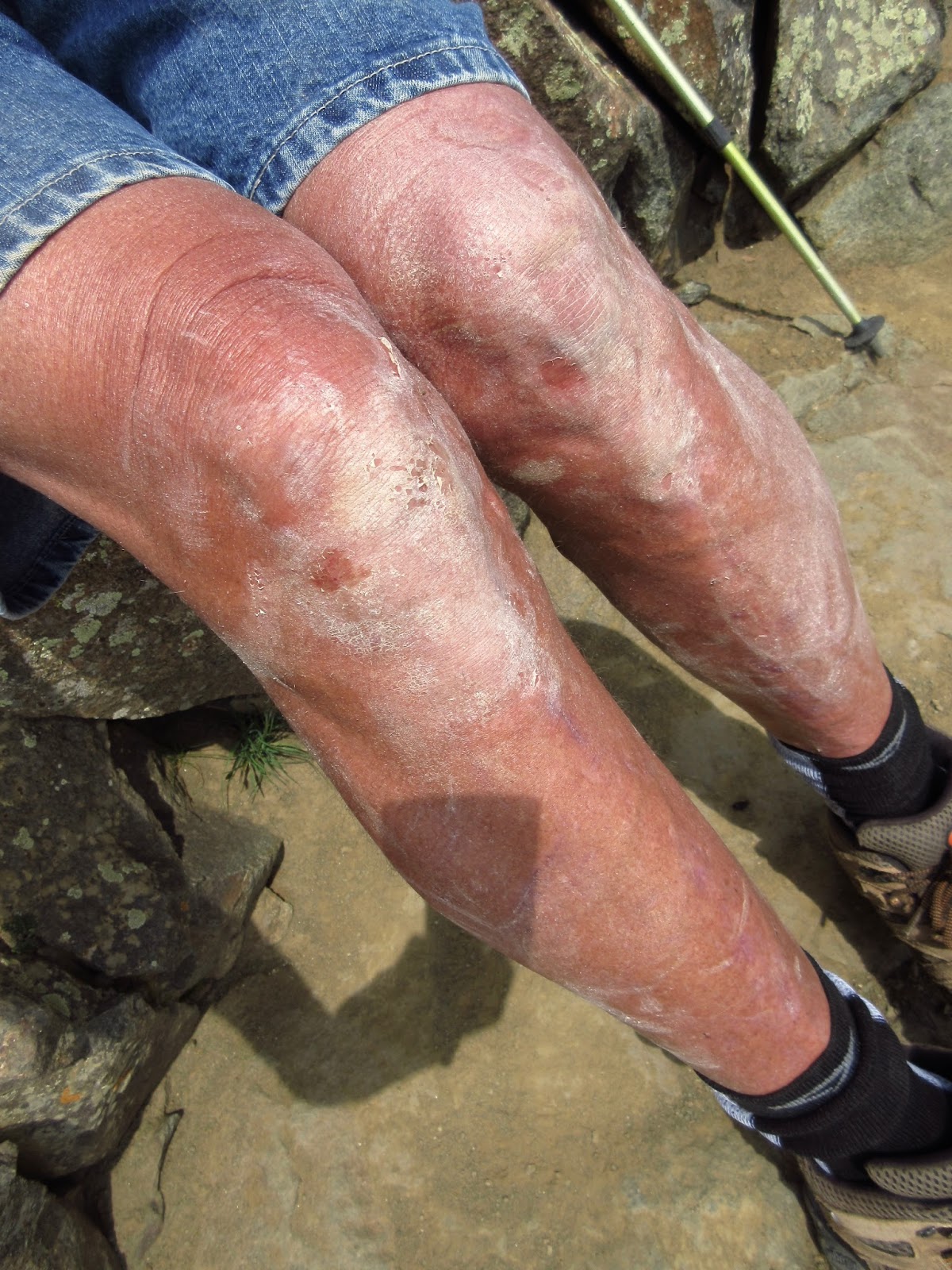 Views from the top... 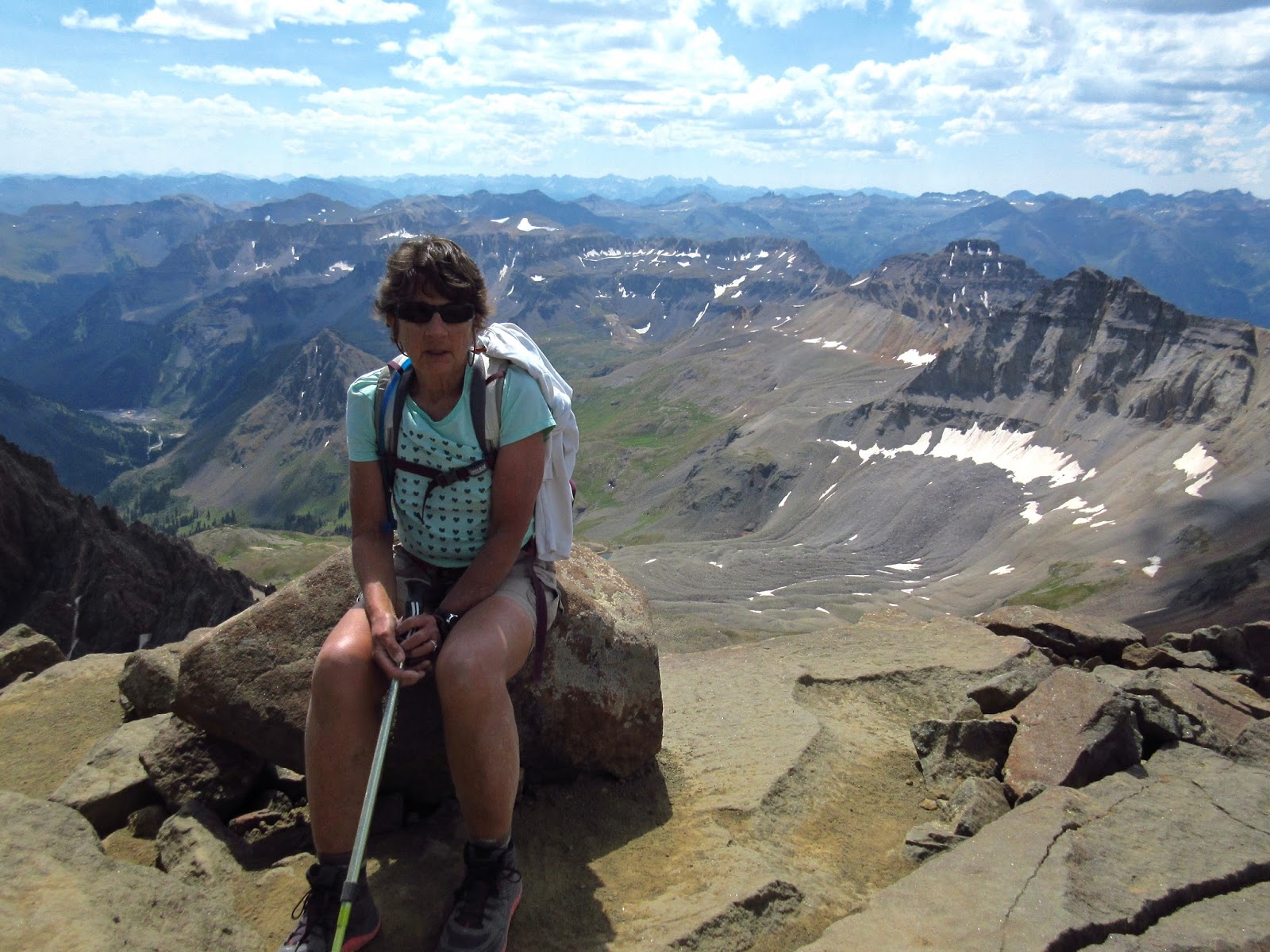 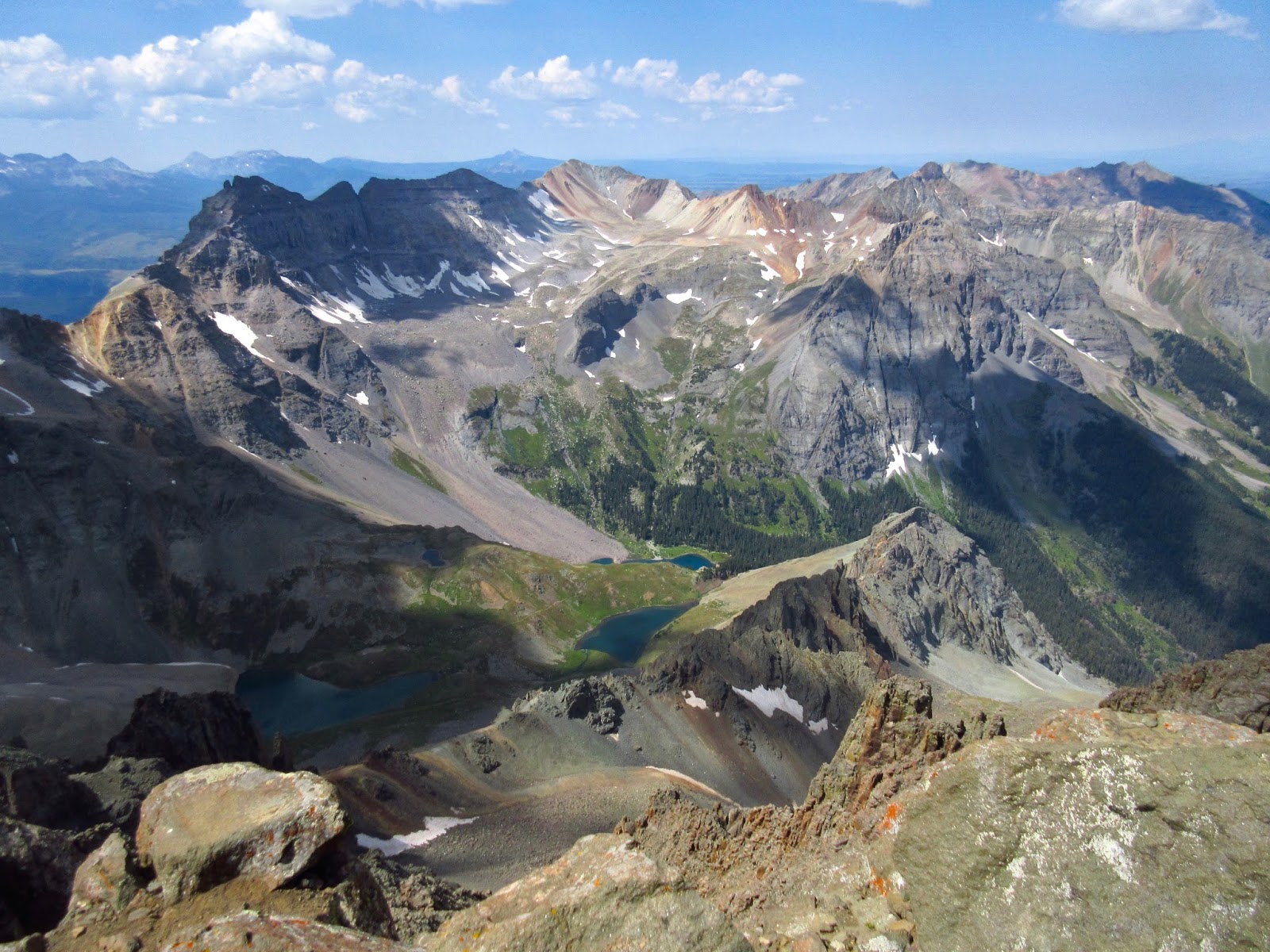 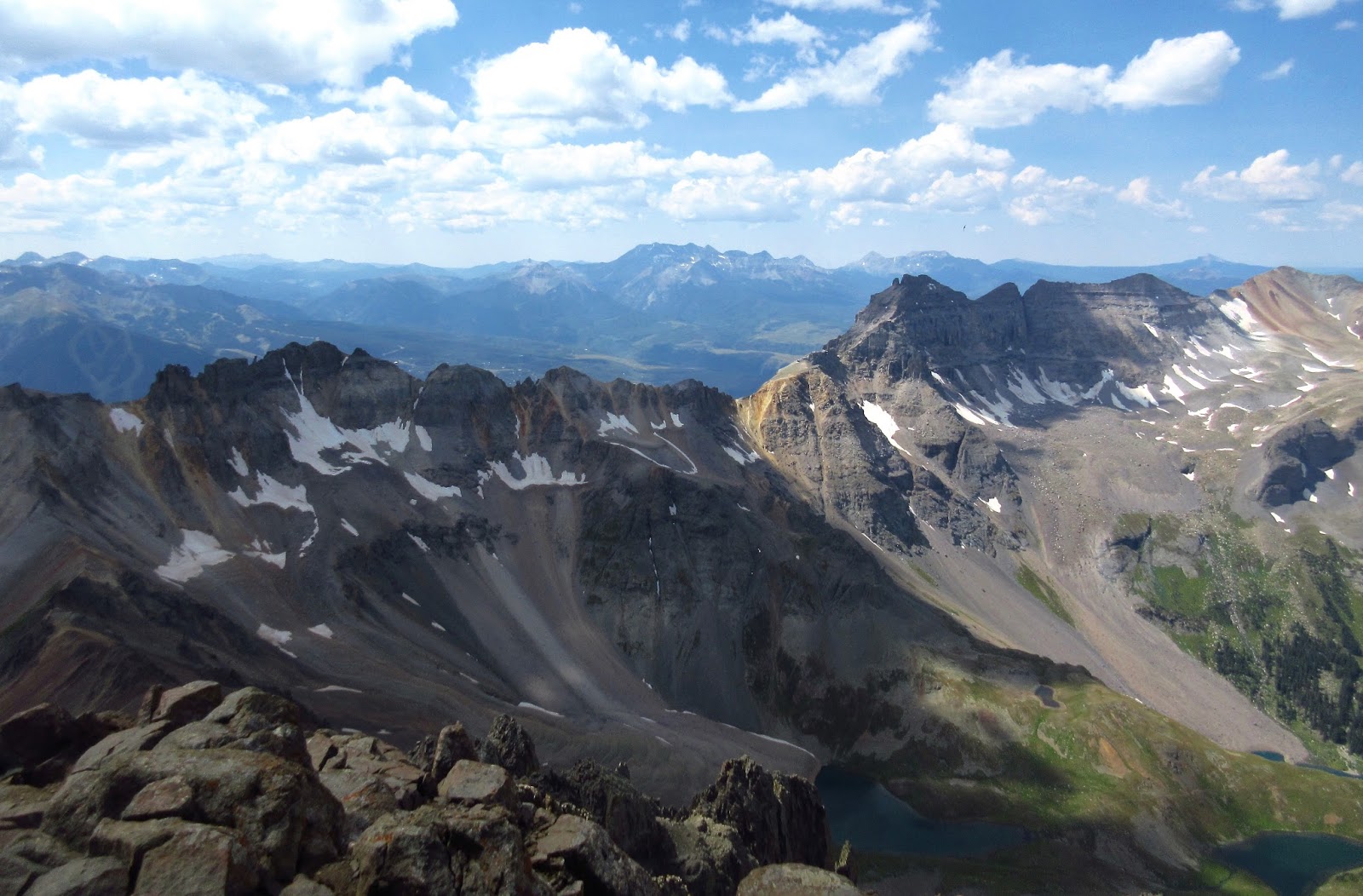 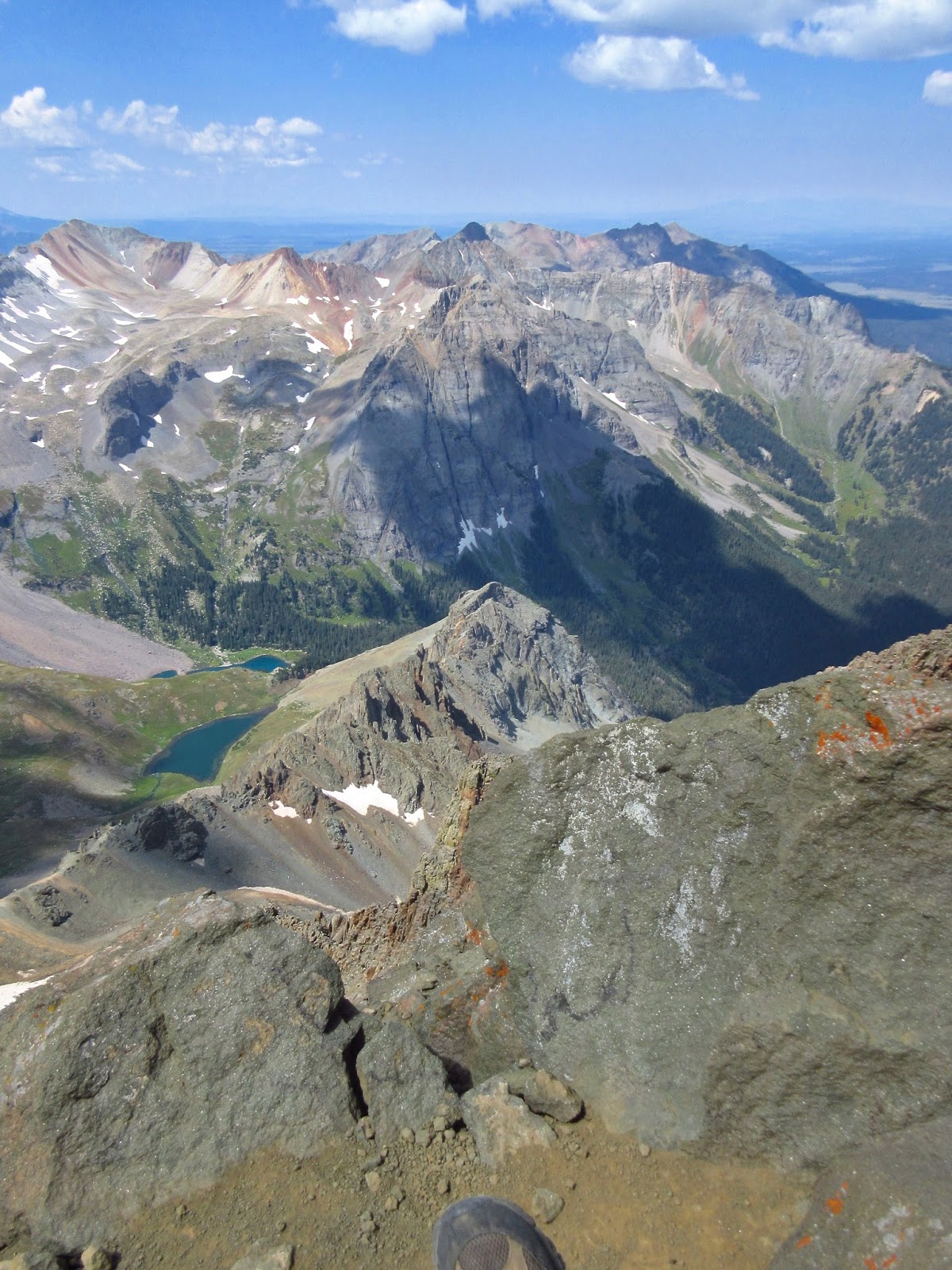 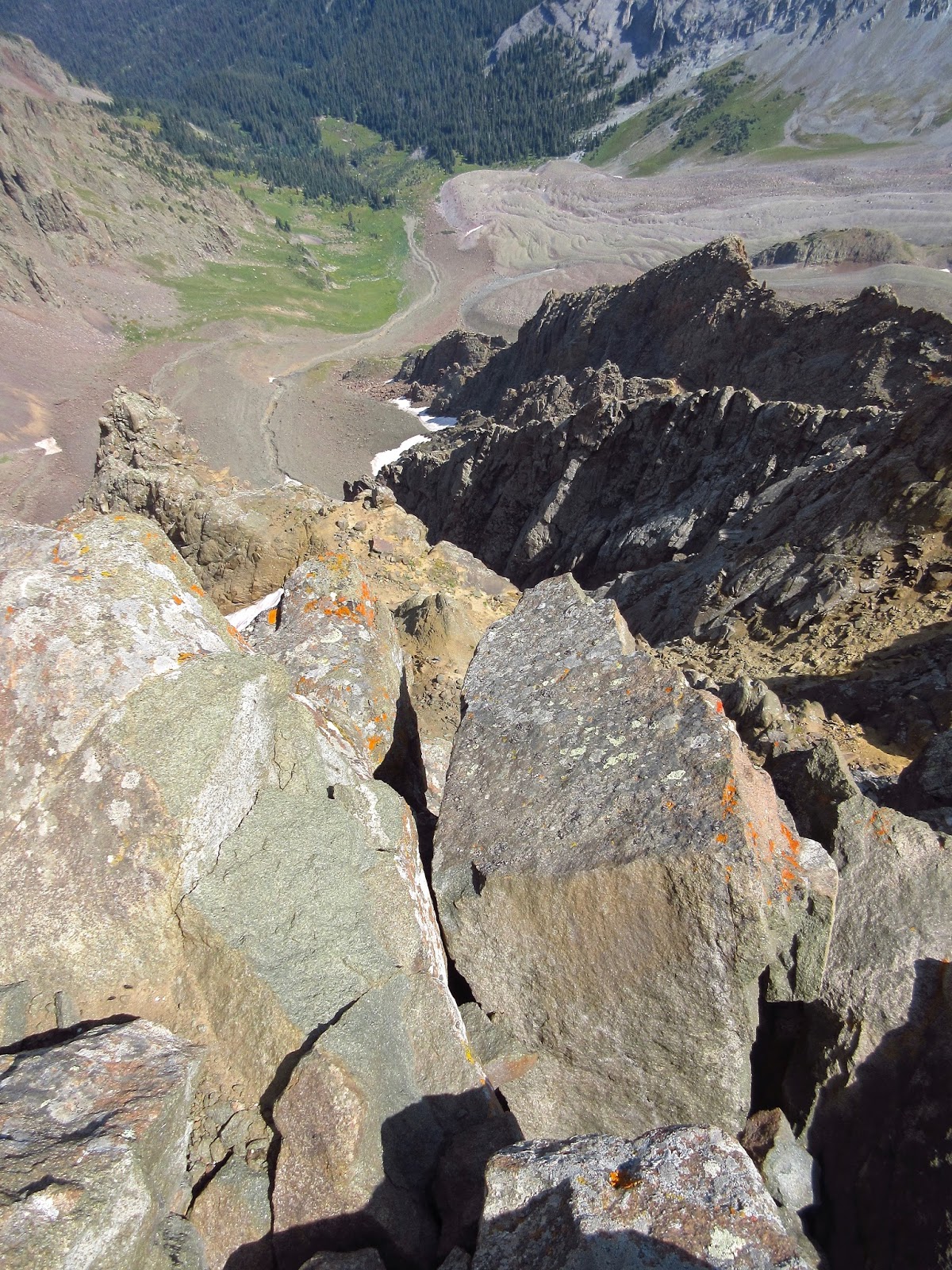 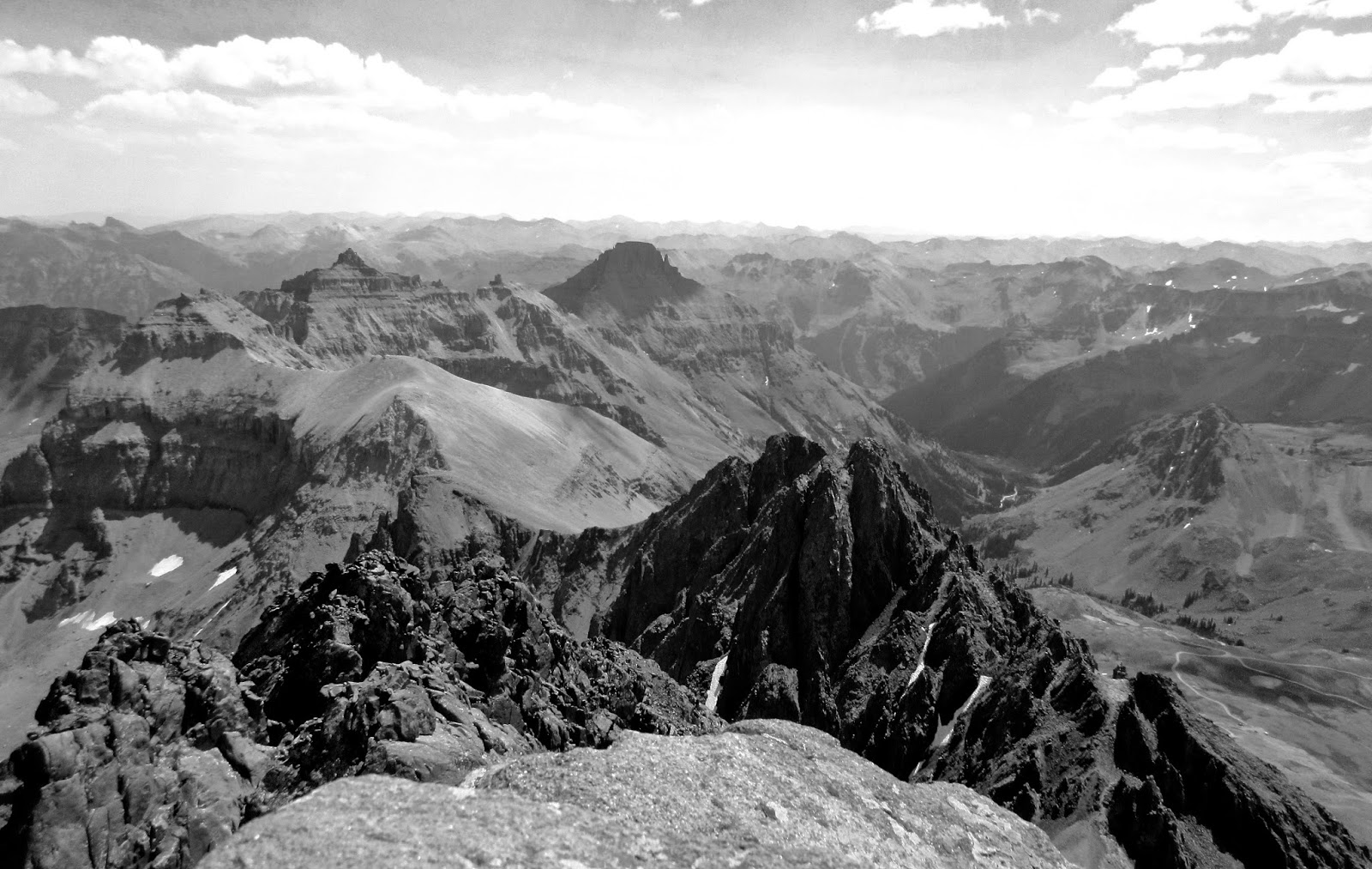 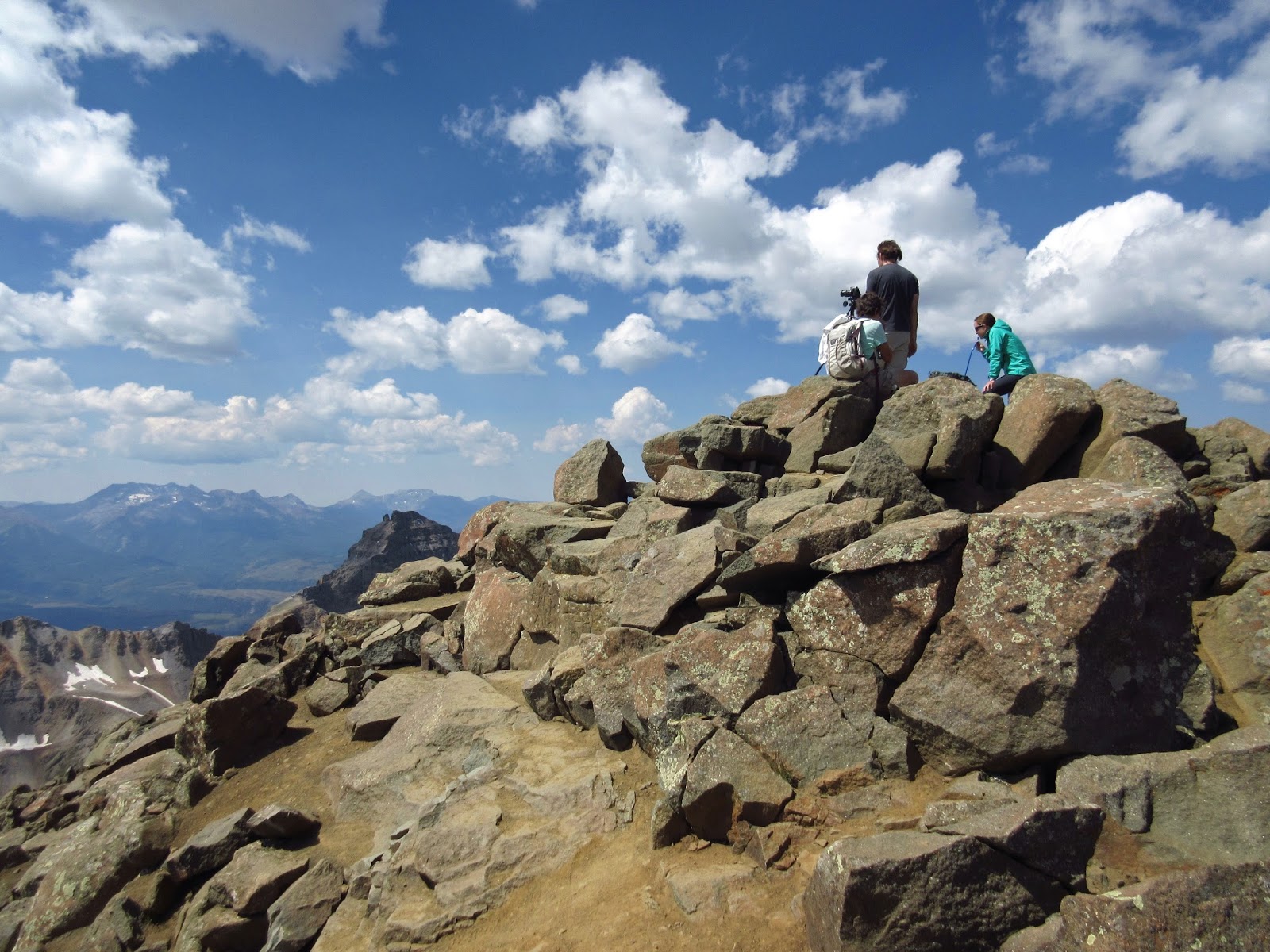 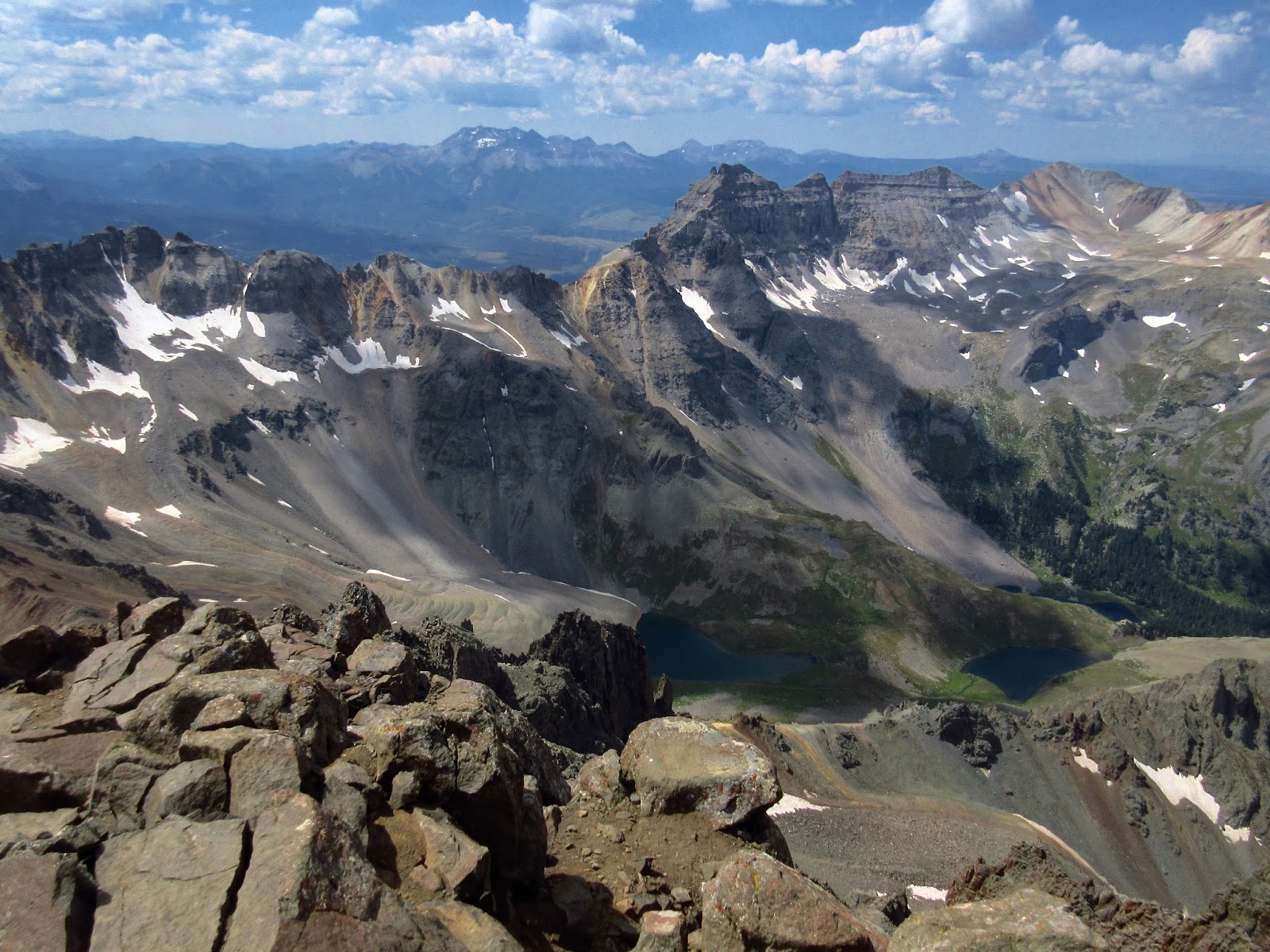 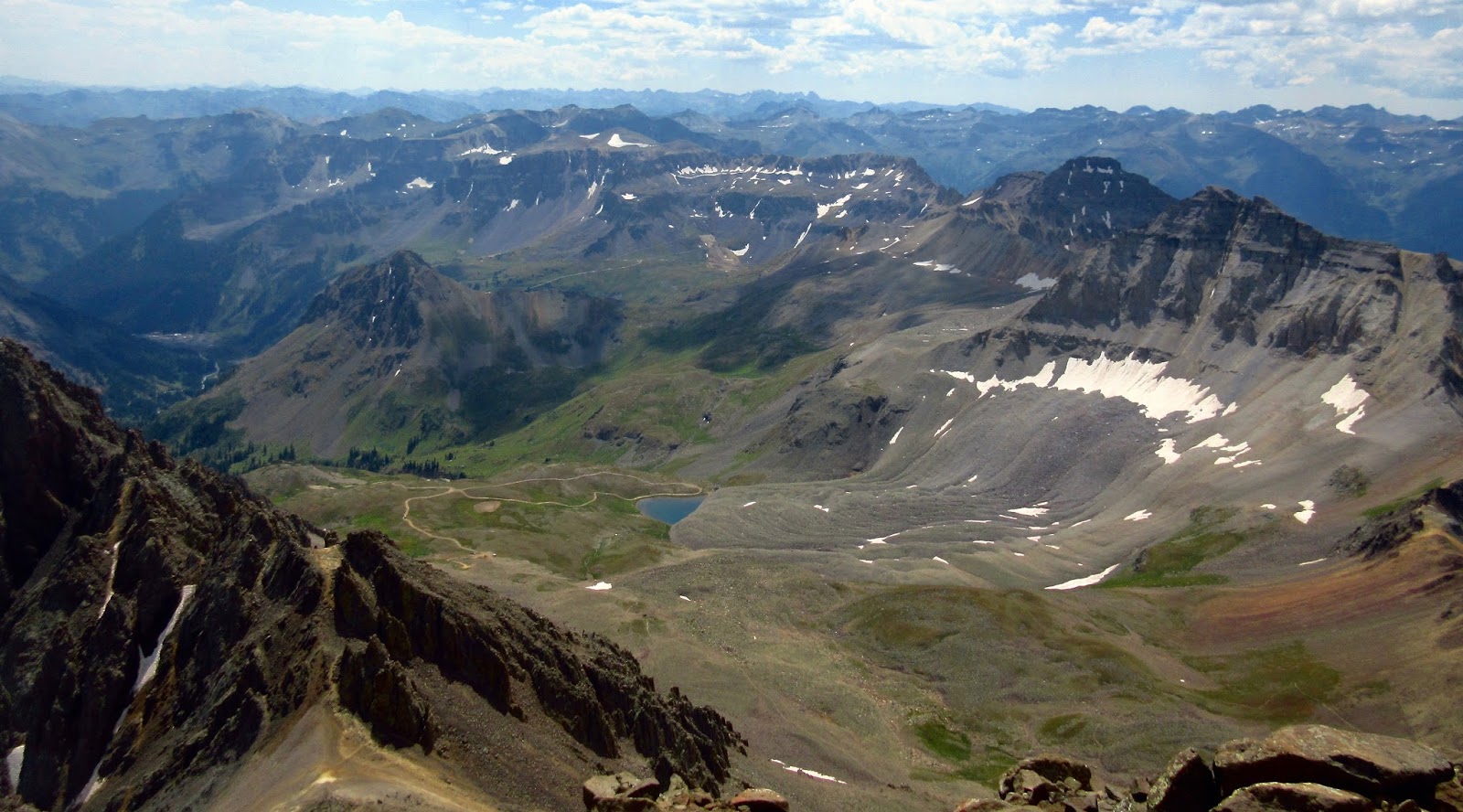 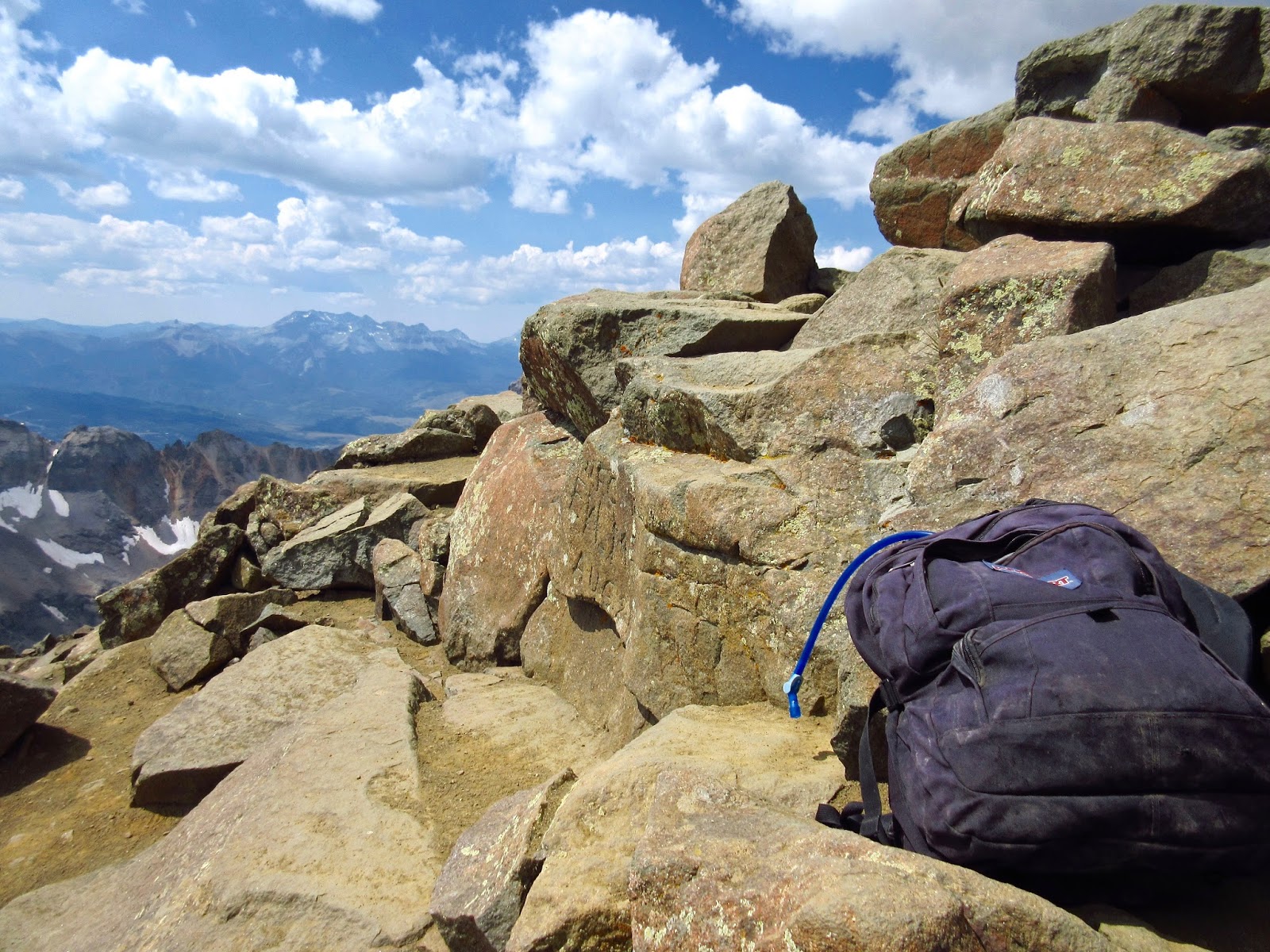 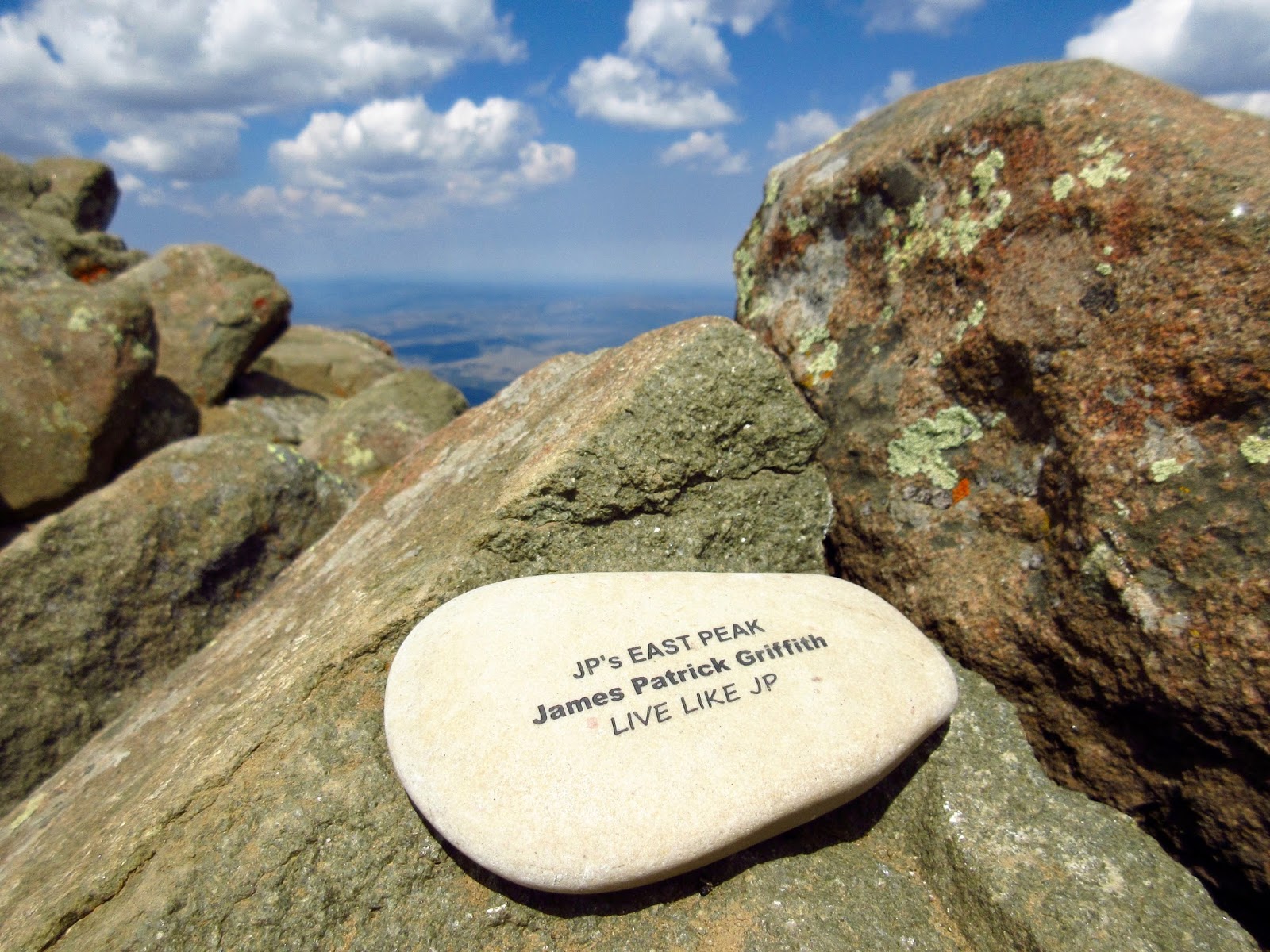 One would think we had it licked after summiting Sneffels. But, as often happens, going down steep, loose, scree/bouldered crap proves more problematic than going up. There were a few other hikers in the couloir by then, thus a danger of us being hit by, or hitting someone else with, rockfall triggered by careless foot placement. Fortunately, everyone was considerate, moved slowly and cautiously and tried to avoid the fall-lines of ascenders and descenders below. 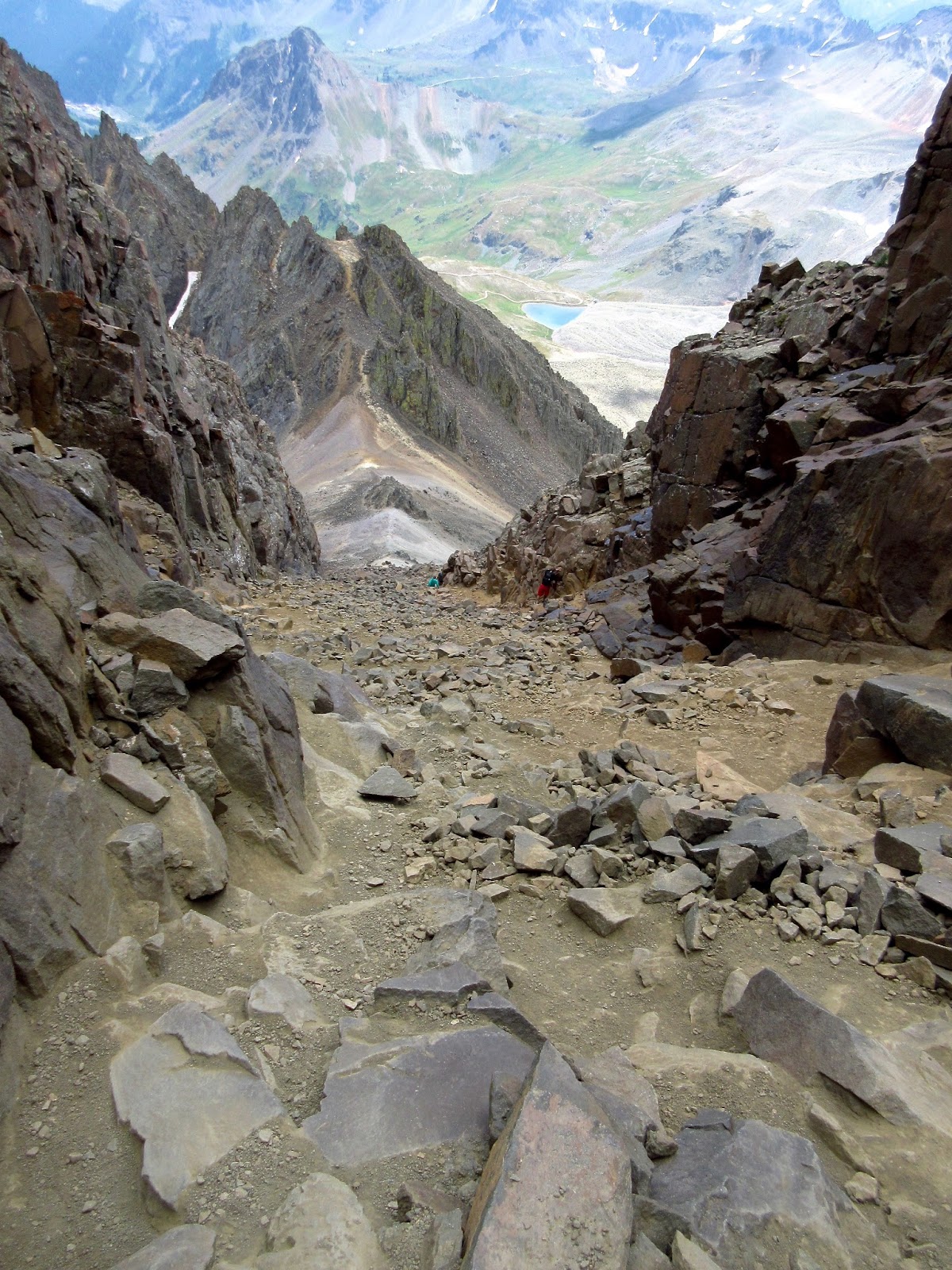 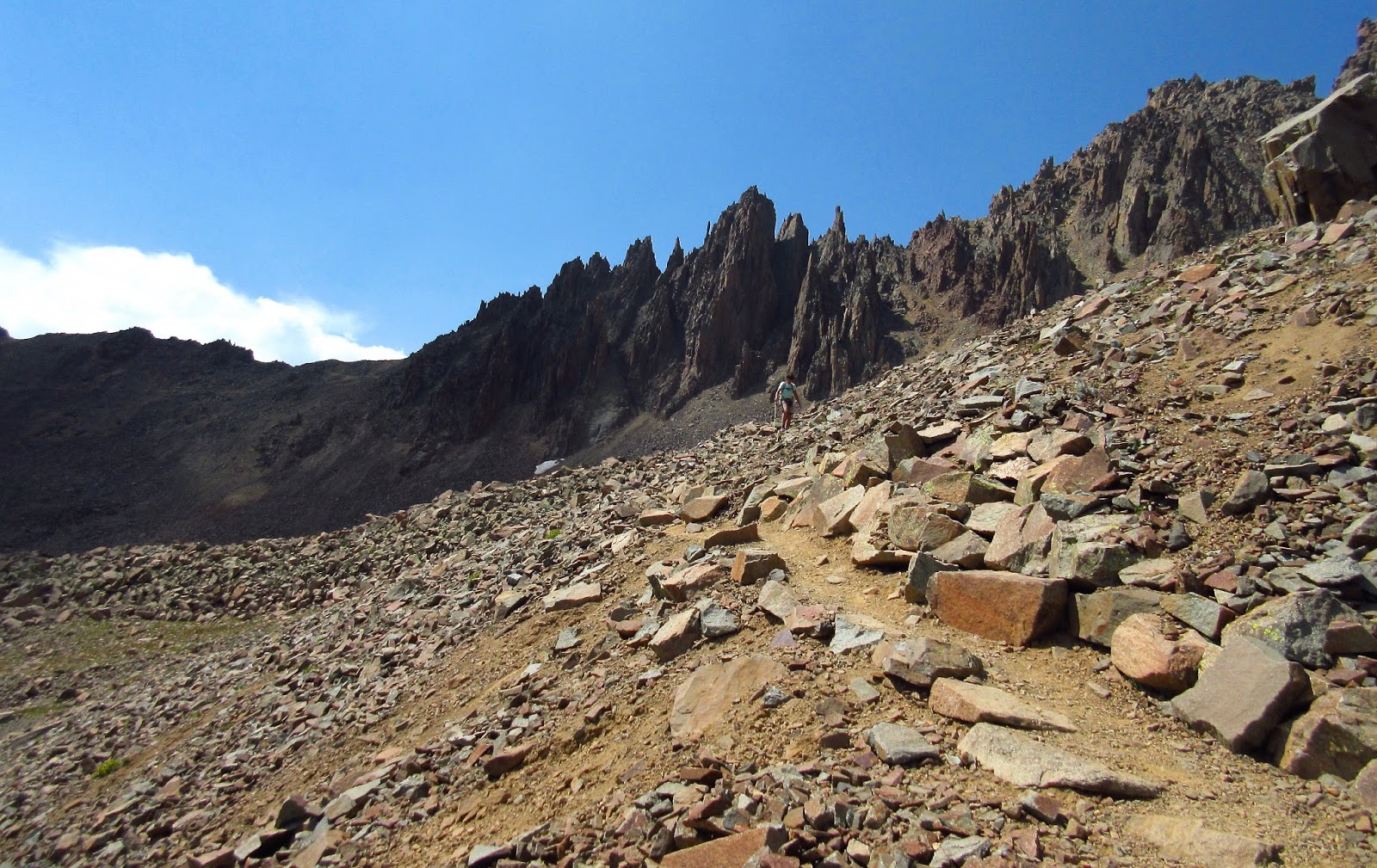 Mission accomplished...safely down. You still "got it," my Love :). Not bad for a couple of Geezers :).

Dickens summed Sneffels better than I can. "It was the best of times and the worst of times," full of "hope and despair," maybe even "foolish." Kinda like "life."
Posted by Box Canyon Blog.com at 8:57 AM