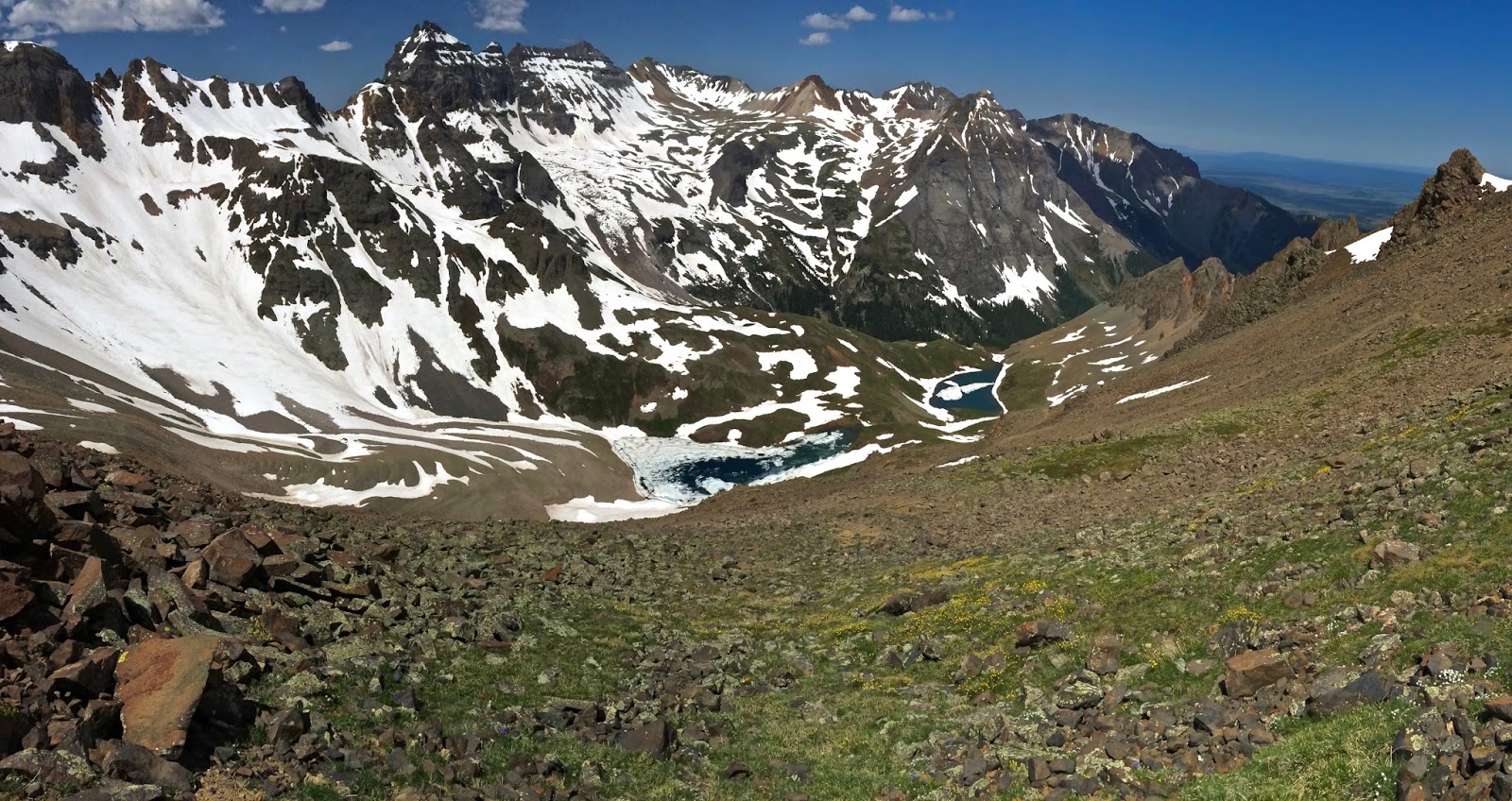 My biggest problem was where to go. Too high, and I'm slogging through scrotum deep snow. Too low and I'm closeted in a damp, dark, dismal forest swatting at mosquitoes.

Worse yet, it's Fourth of July weekend...recess for the misguided Urbanite Lunatic Fringe, who, more and more, are convinced that "nature" is where you go to "start your engines," raise clouds of dust, and ruckus with minimally muffled motorized freak-machines. If I sound like a cranky old fuddy-duddy, it's because I've been driven to it.

To be clear, I have nothing against Jeeps or similar four-wheel-drive vehicles. They are quiet, and slip along slow and easy with minimal disturbance. Unfortunately, they are fast being replaced by ob-noxious Freak Machines.

What I really need is a climb. Convenience suggests Mount Sneffels, just a hop-skip-jump up Camp Bird Road. I tell Bobbie I'm headed up to Blue Lakes Pass so she won't worry about me trying to negotiate a 14er with couloirs still full of snow. I did the south facing "ridge route" about this time last year (Link) and there was only one place with steep snow that kind of spooked me. Oh yeah, there was also a gale wind that complicated feet landing where aimed :(.

I was counting on the road beyond Yankee Boy Basin still being snowed in—something to repel the motorized Urban Lunatic Fringe, because most of them don't care to trade "quad-runners" for "quads." 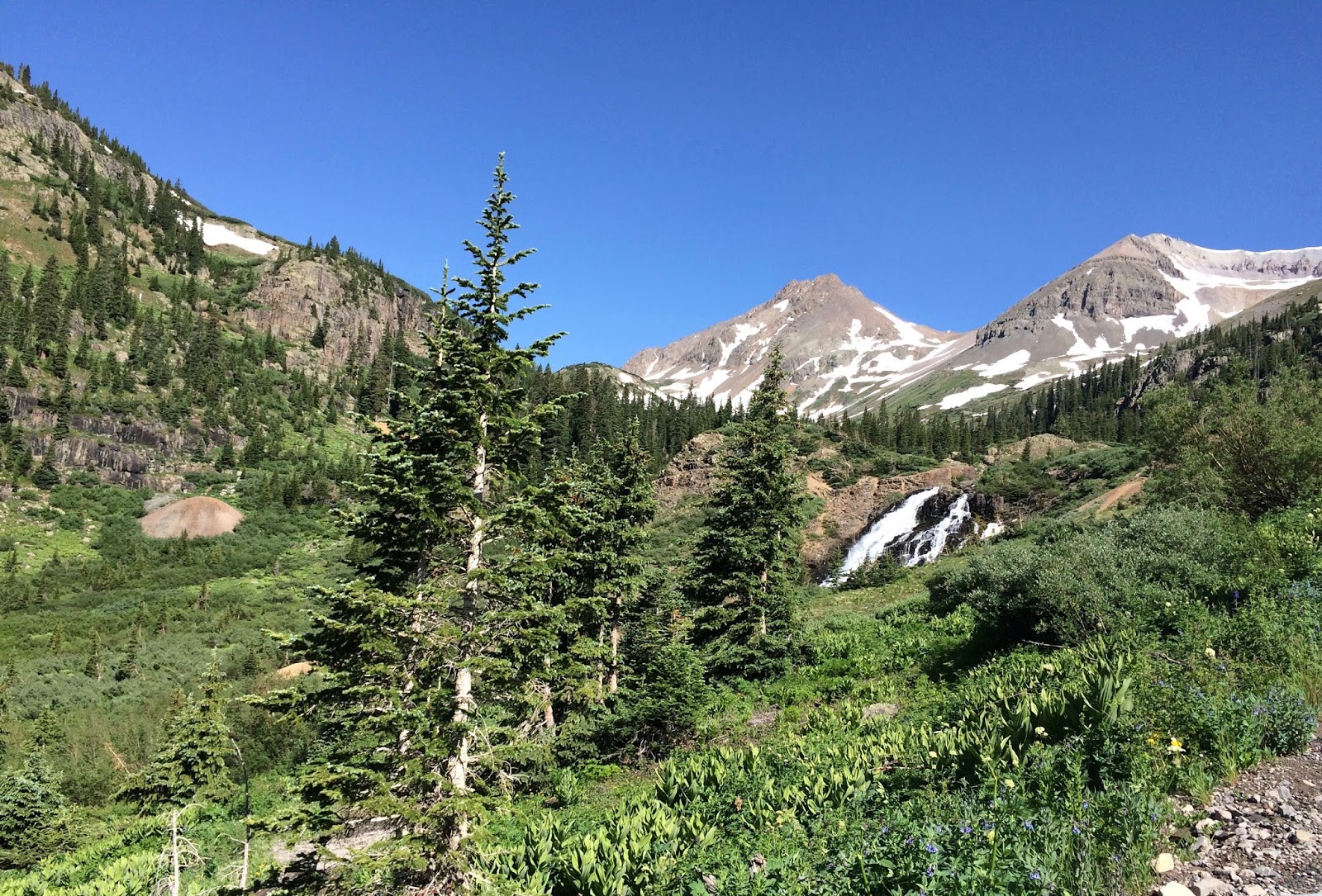 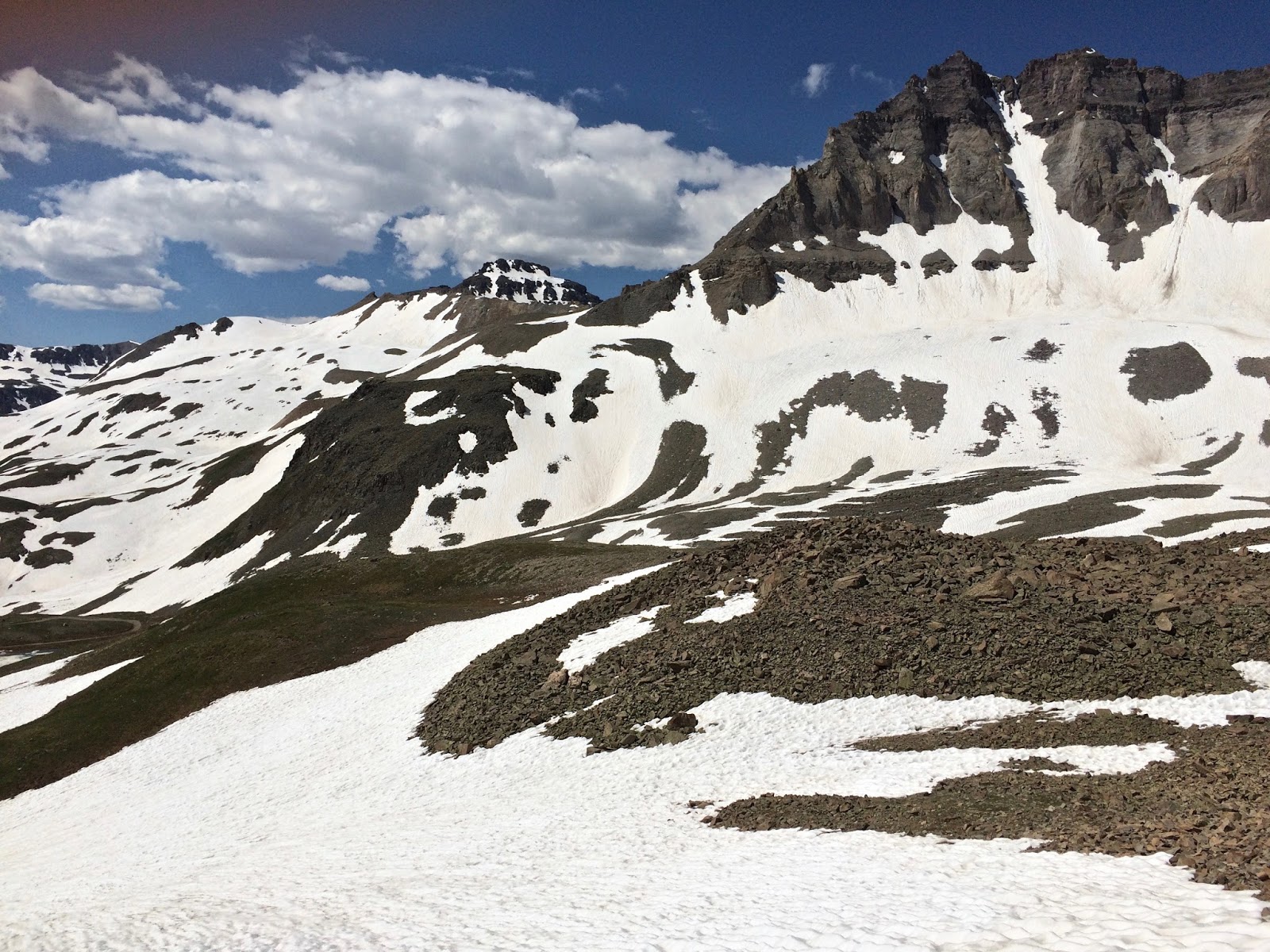 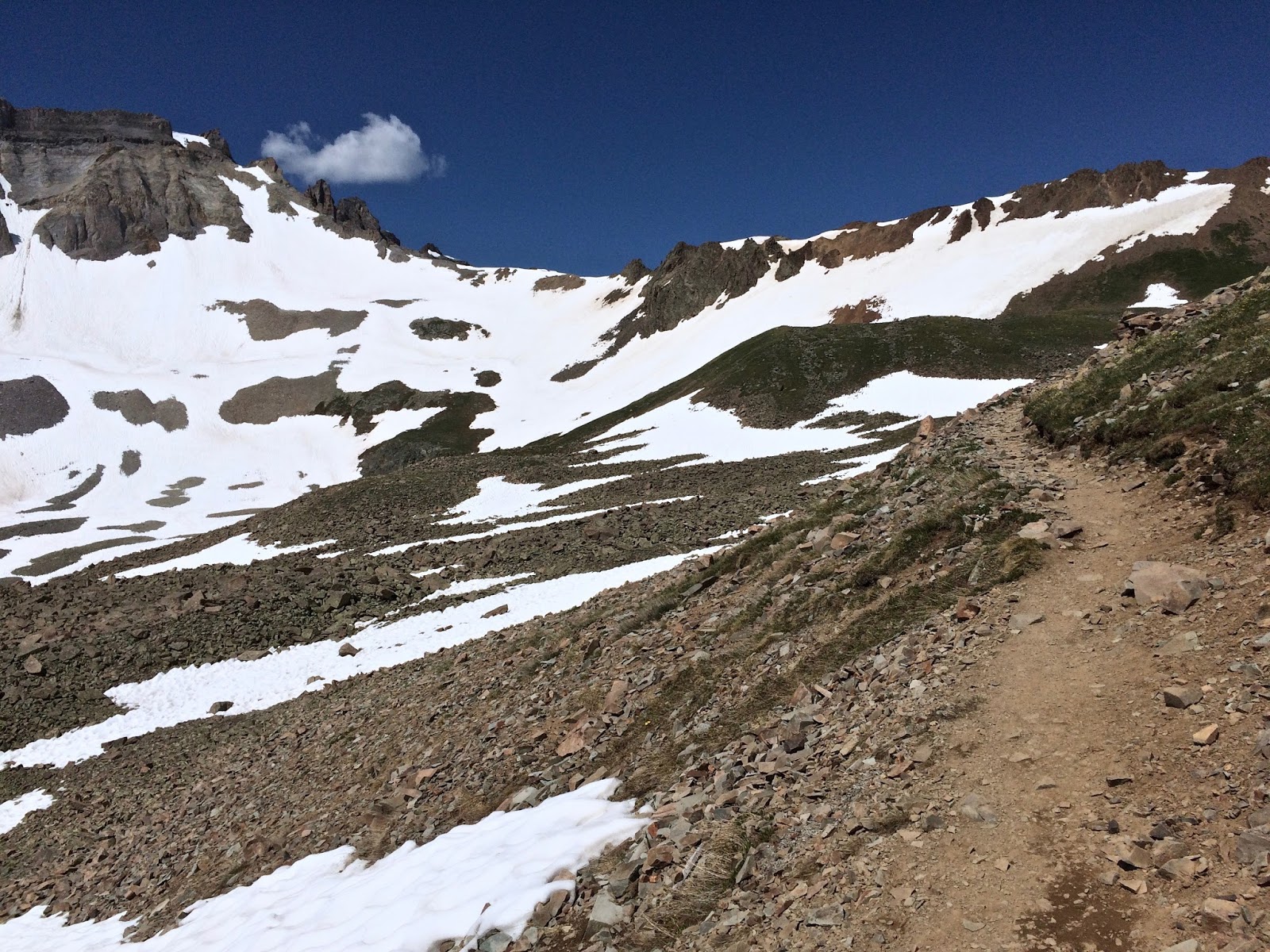 Yankee Boy was a zoo, as expected. I finally found a parking place and set foot to snowed-in road, leaving 95% of the U.L.F. and noise behind. I met few hikers beyond the basin, most on their way to attempt Sneffels, and two or three just wanting an snowy alpine experience.

The main south-facing couloir approach was, for the most part, clear of snow. But my legs weren't "feelin' it." Again, wind gusts staggered my steps on loose scree. I met a couple of guys and a gal on the approach who hadn't climbed Sneffels before... tried to answer their questions honestly, yet encouragingly. I was about to offer to guide them up when a gust of wind made up my mind not to go. I bid them good luck and headed for Blue Lakes Pass...only 13,000 feet, but still one of the windiest notches around.

I had it all to myself except for a solo climber from Albuquerque who had his heart set on Gilpin peak. There was still a lot of snow on the ridge route, and, of course, the wind was howling on the pass, blowing our attempts at conversation to Kansas.

We hunkered down on the lee side so we could better talk. I mentioned that a guy fell and died on Gilpin last week. The fall didn't kill him, but massive internal bleeding did. Albq. Man decided to wait for a better day, less wind, and less snow on the ridge. He headed down with ice axe unused, strapped to his pack. Discretion can be so Disappointing.

I had my usual energy bar lunch while overlooking two of the three Blue Lakes. The upper was just beginning to thaw out from winter. There are trout in that lake, I know this because I've caught a few. I wondered if they were hungry enough to take a fly.

If not for the wind I could have spent a couple hours on Blue Lakes Pass, just looking around, passing the afternoon. But wind is my least favorite thing on God's green earth, so I cut it short and retraced my steps back to Yankee Boy Basin and the waiting Lunatic Fringe.

I found the riders/drivers more aggressive and rude than ever before...not showing the slightest amount of courtesy to slow down in narrow places with drop-offs.

Forced to stop by a string of oncoming ATVers (they love to travel in packs) I inched Petroleus Rex to the very edge of a cliff and waited to do a little palms up "WTF?" shrug at the leader. One by one they flew by—all clad in leathers and full-face helmets, engines revving like chainsaws, consuming Mother Nature like a never-ending thrill-supply.

In an empty vacuum of post-parted peace, it occurred to me that the earth could use a good plague...maybe take about half of us out...preferably the road-raging crazy half.

Happy 4th, people. And take it easy on the roads going home.
mark 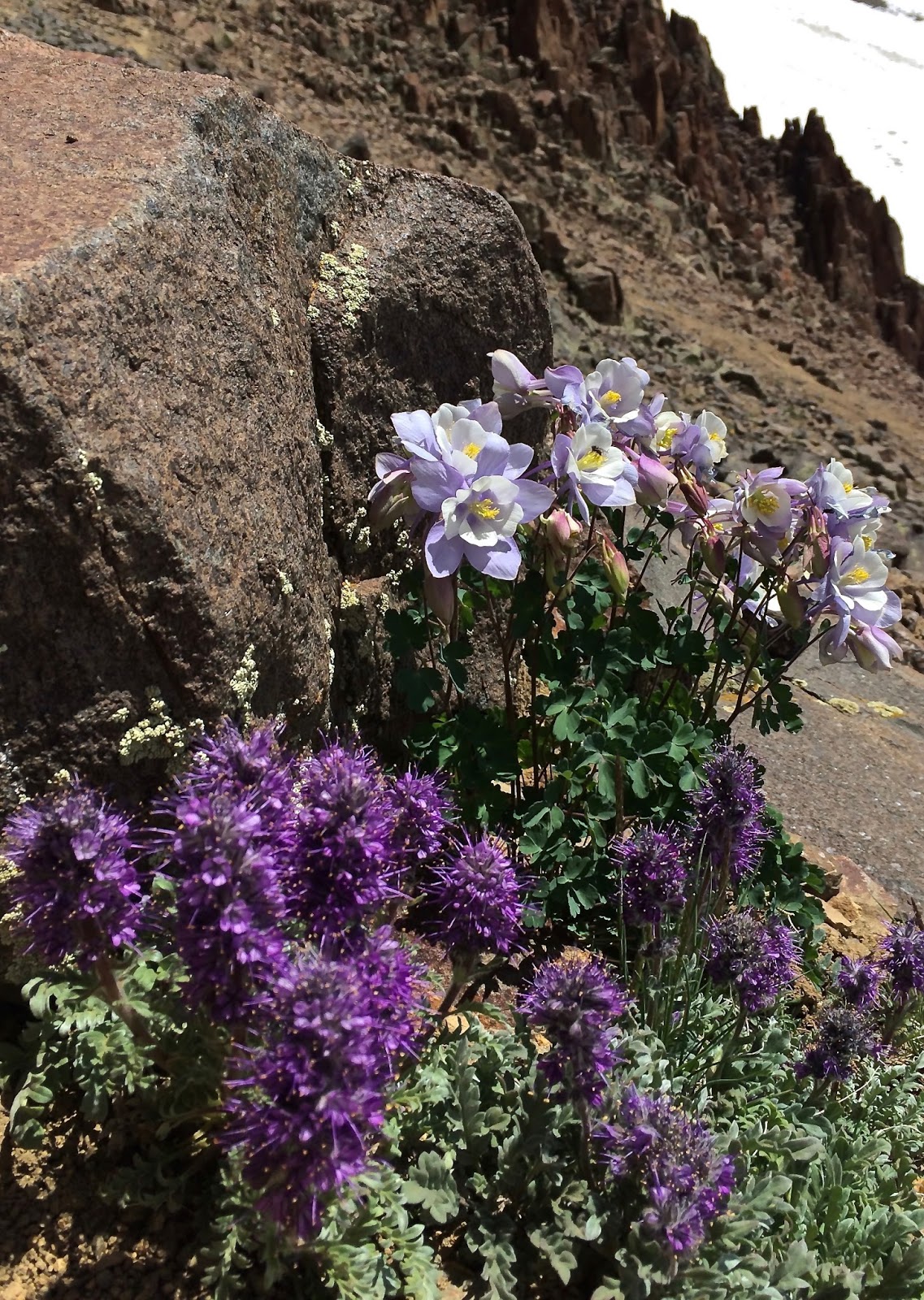 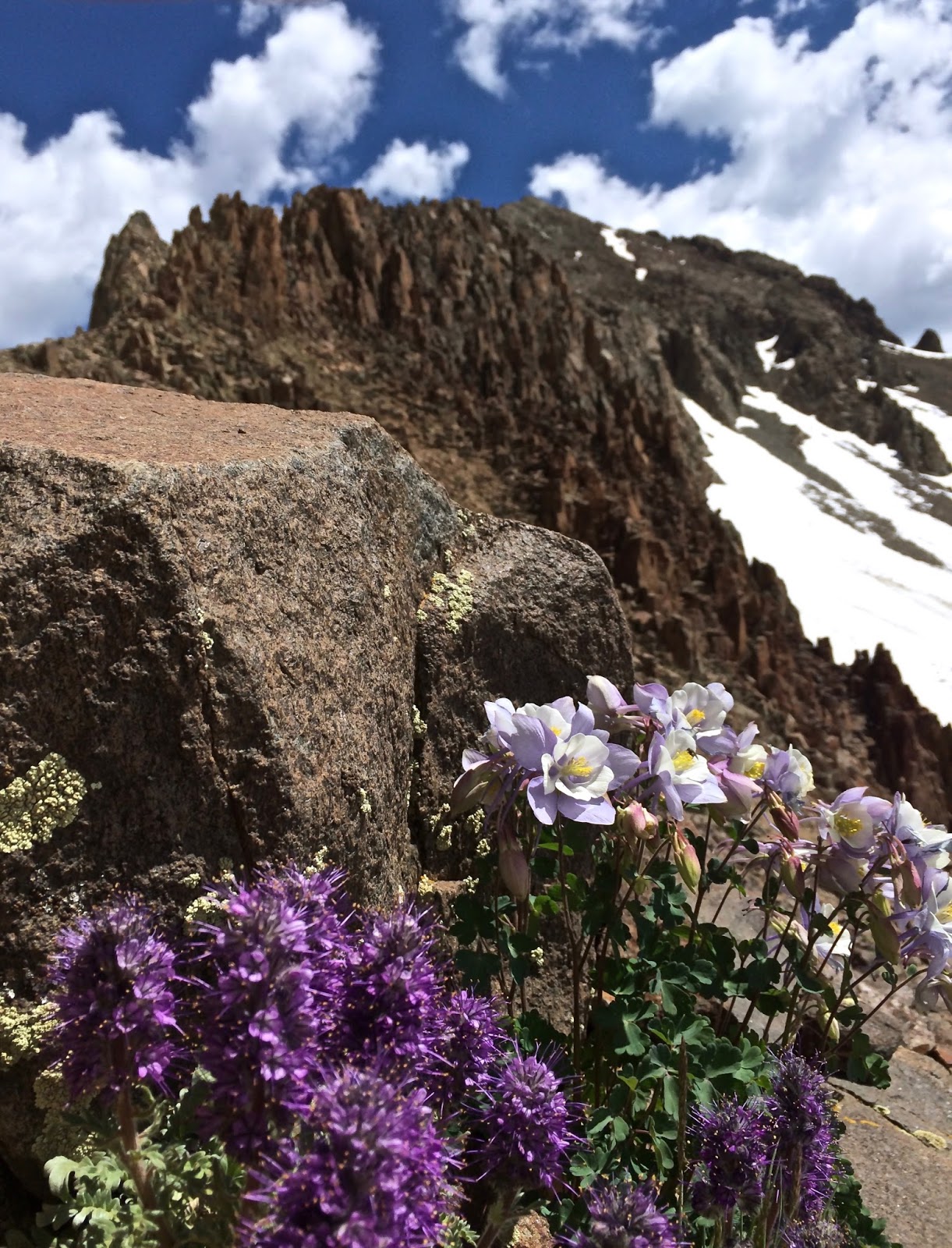 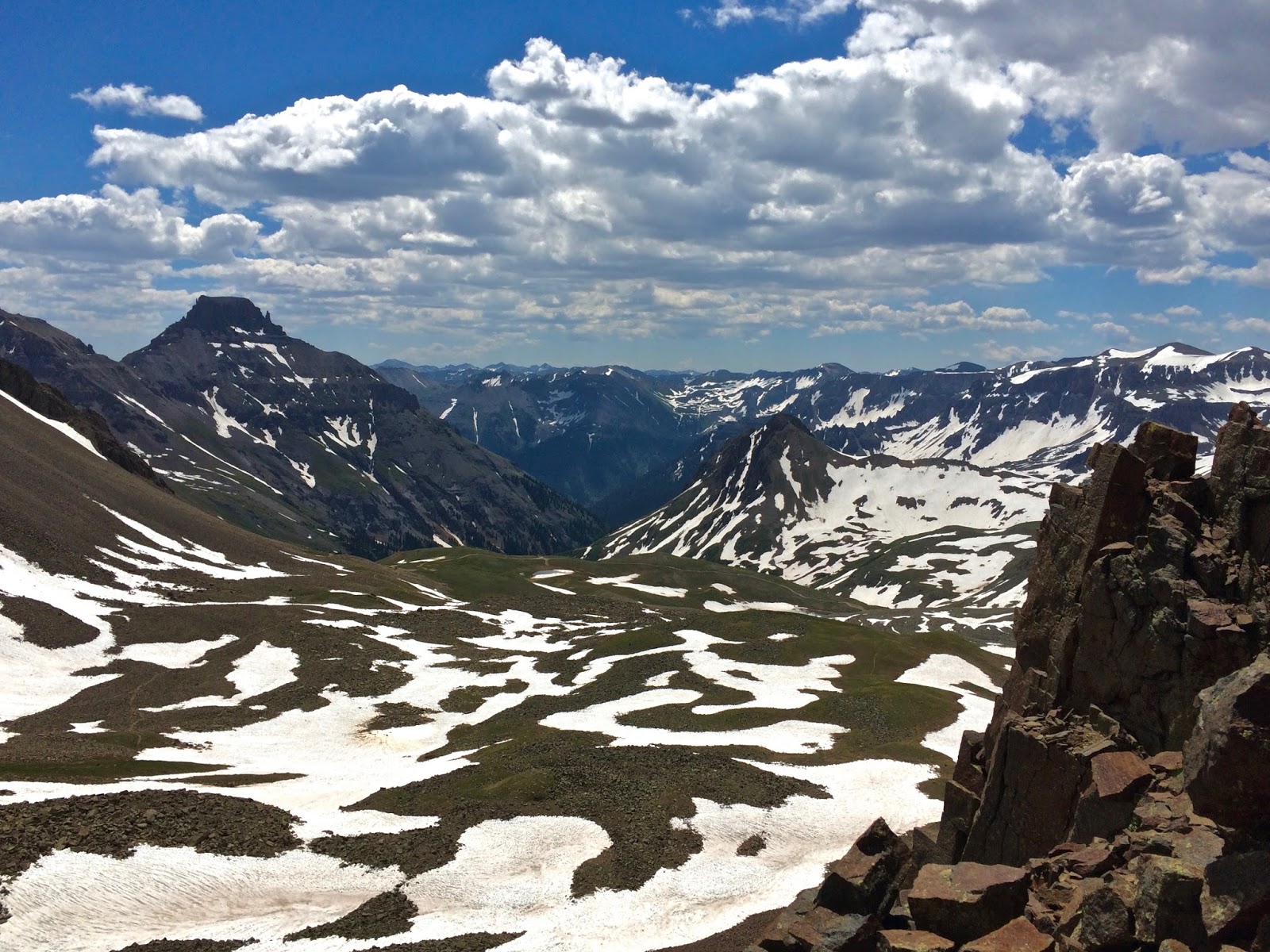 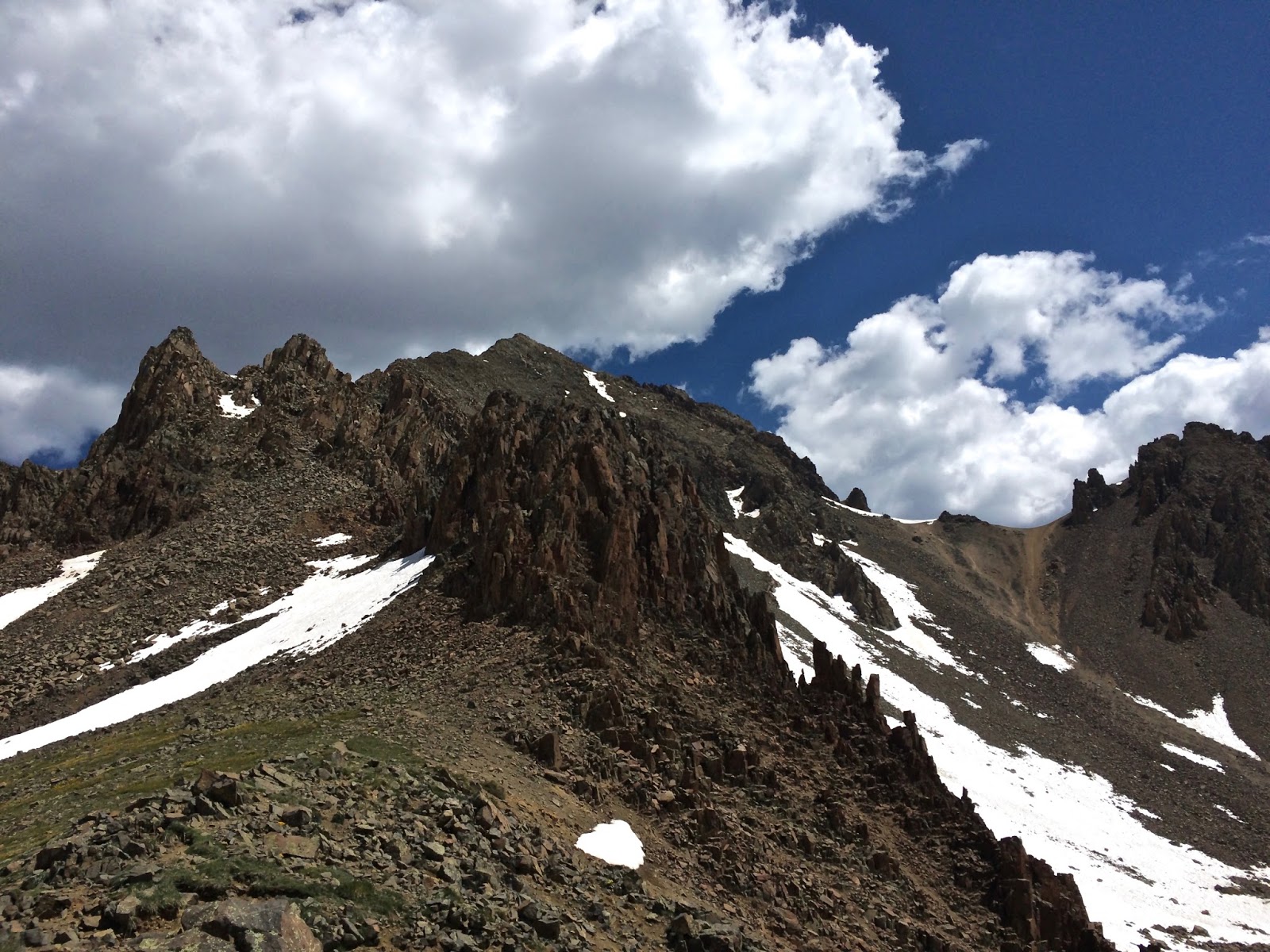 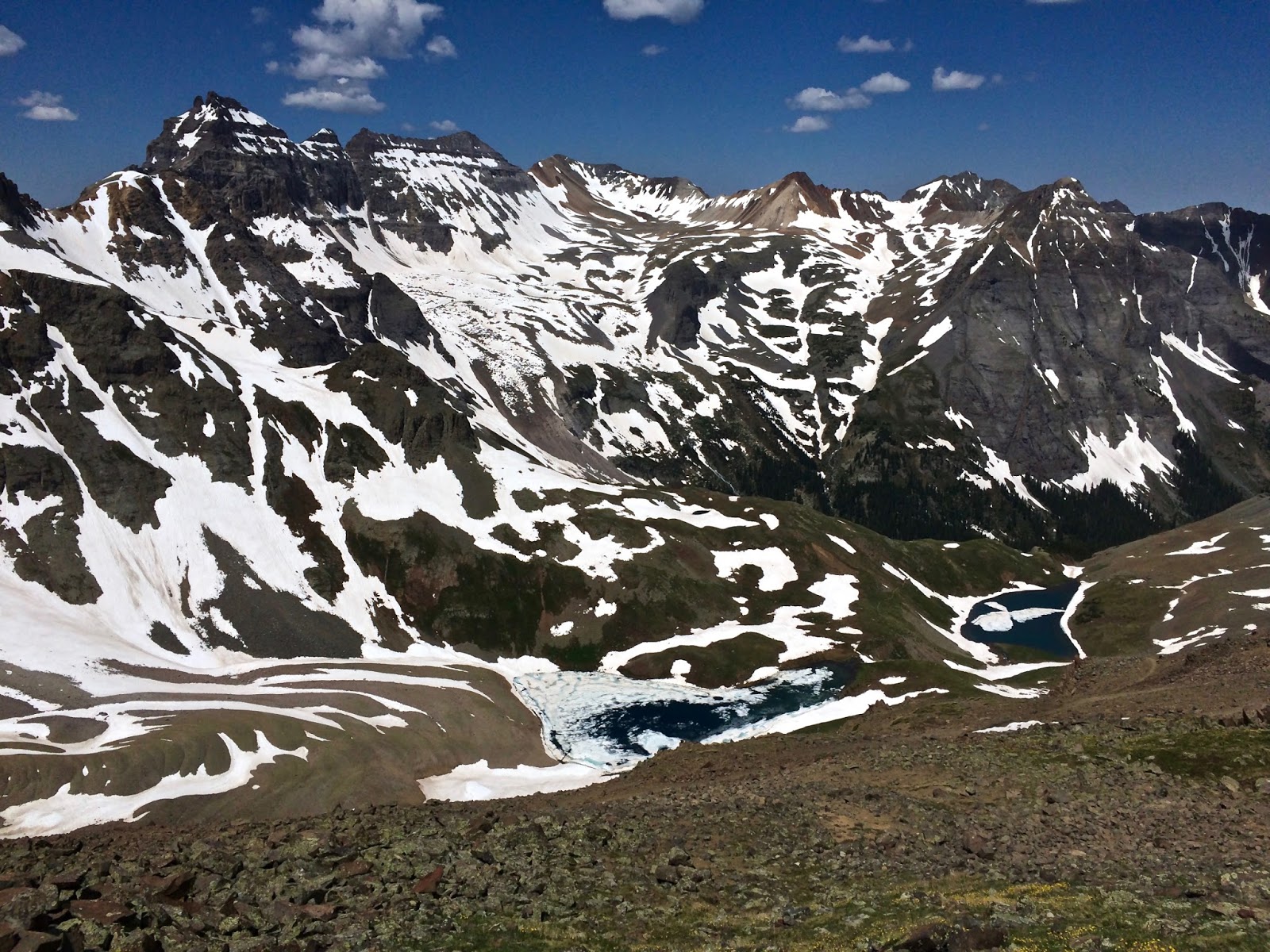