An Abram summit with the Swift Family Anderson 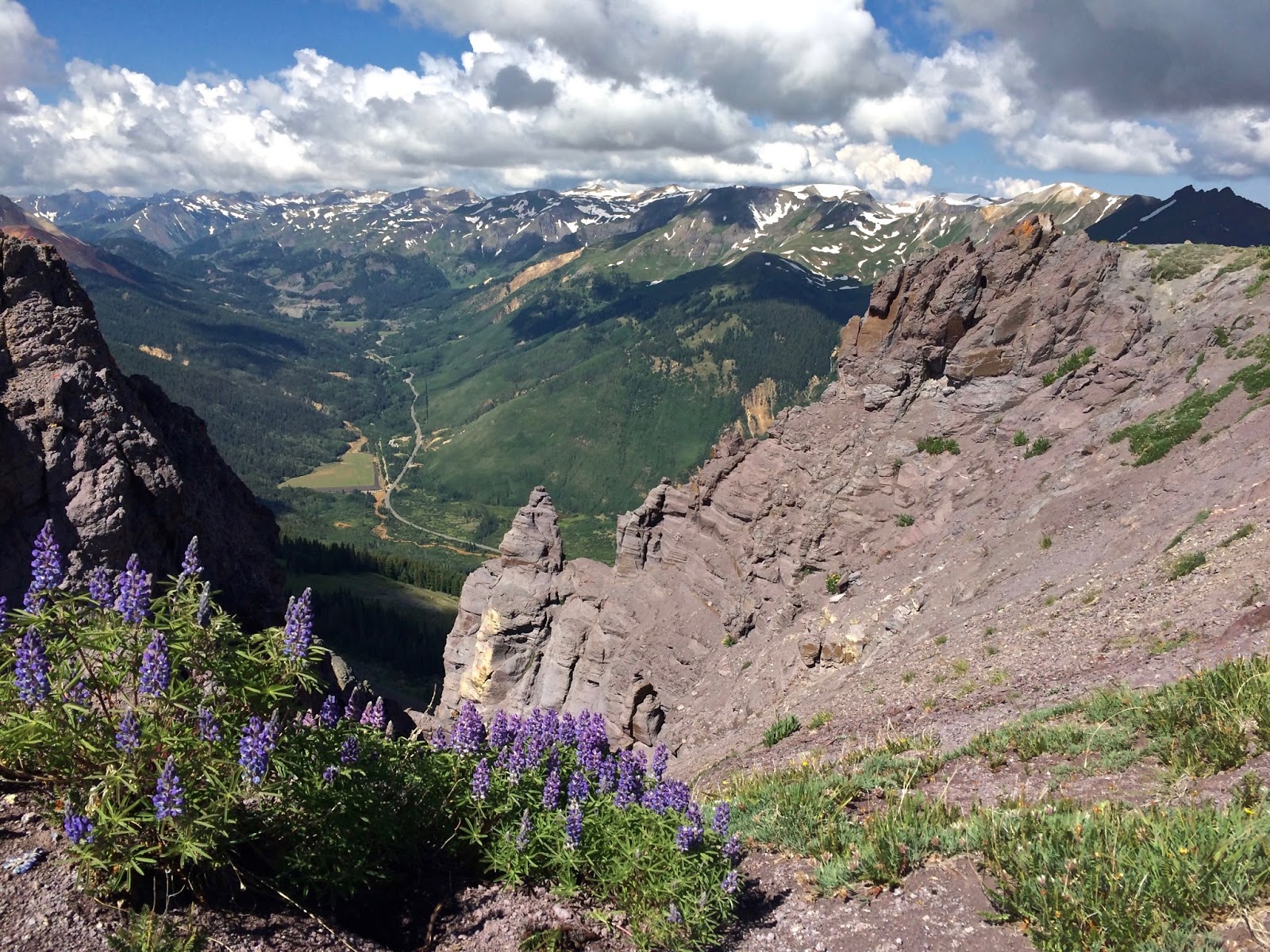 You see it from afar, sandwiched mightily in a noticeable gap, a snowcapped pyramid as magical and powerful those found along River Nile in Egypt. It's true what they say, you know, about the Powers inherent in Pyramidal shapes. I've seen it for myself. Weird shit...like finding my normally dull pocketknife honed to a razor's edge after ascending Abrams Pyramidal peak. And then there are stories...rumors of old men with vasectomies who, upon return, impregnate unassuming women with tied tubes. FYI Geezers, lest you desire putting yet another rugrat through college or your Social Security check halved by child support payments, I recommend abstaining from sex for at least a week after climbing Abram.

A few weeks back I did a post on summiting Red Mountain 1 with the "Swift Family Andersons," long-distance runners and part-time neighbors from Kentucky who's hearts more and more reside in Lovely Ouray.

Well, they're back, as Jack Nicholson would say, and the monsoons finally took a day off. Old Sol took a shining to Abram's pyramid, a peak that sometimes looks so close you can reach out and touch it; others, so far, far away it disappears in mists of clouds. I don't like it when our mountains are shrouded in clouds. It's like a nightmare where I die and wake up in Kansas.

Some of you, the one's who actually read these posts instead of just flipping through the purdy pictures, will recall that a few posts back we summited a somewhat snowy Mount Abram with Kay and Sue. Now why, some are rightfully wondering—with literally thousands of mountains to choose from—would we want to re-do Abram? Well I'll tell you why: One, it's tame-as-a-puppy after snow comes off; steep, but easy. And Two, because one is not officially a "local" until they've summited Lovely Ouray Sentinels, Abram and Twin peaks. Having already bagged Twin Peaks last year, the "Swift Family" only needed Abram to become true "Ouranians" (pronounced, Your-anians) or as some our more "colorful" locals say, "Ouranus'es"  (Your-anus'es).

What a difference a couple of weeks makes. The massive glacier of snow was almost gone in Abram's vertiginous approach couloir. Even though we had a bone-dry June, a few old men of the mountain wildflowers clung for life against the odds...waving and smiling to our delight.

And then there's The Reds—always outstanding in their field in an otherwise boring neighborhood—looking for the world like Gawd Almighty kicked over a bucket of orange paint while redoing His Upper Room. What better and more fitting backdrop to rest eyes, especially given the Anderson's having summited two out of the three Reds. Slow is the process of "connecting dots" when you are part-timers. 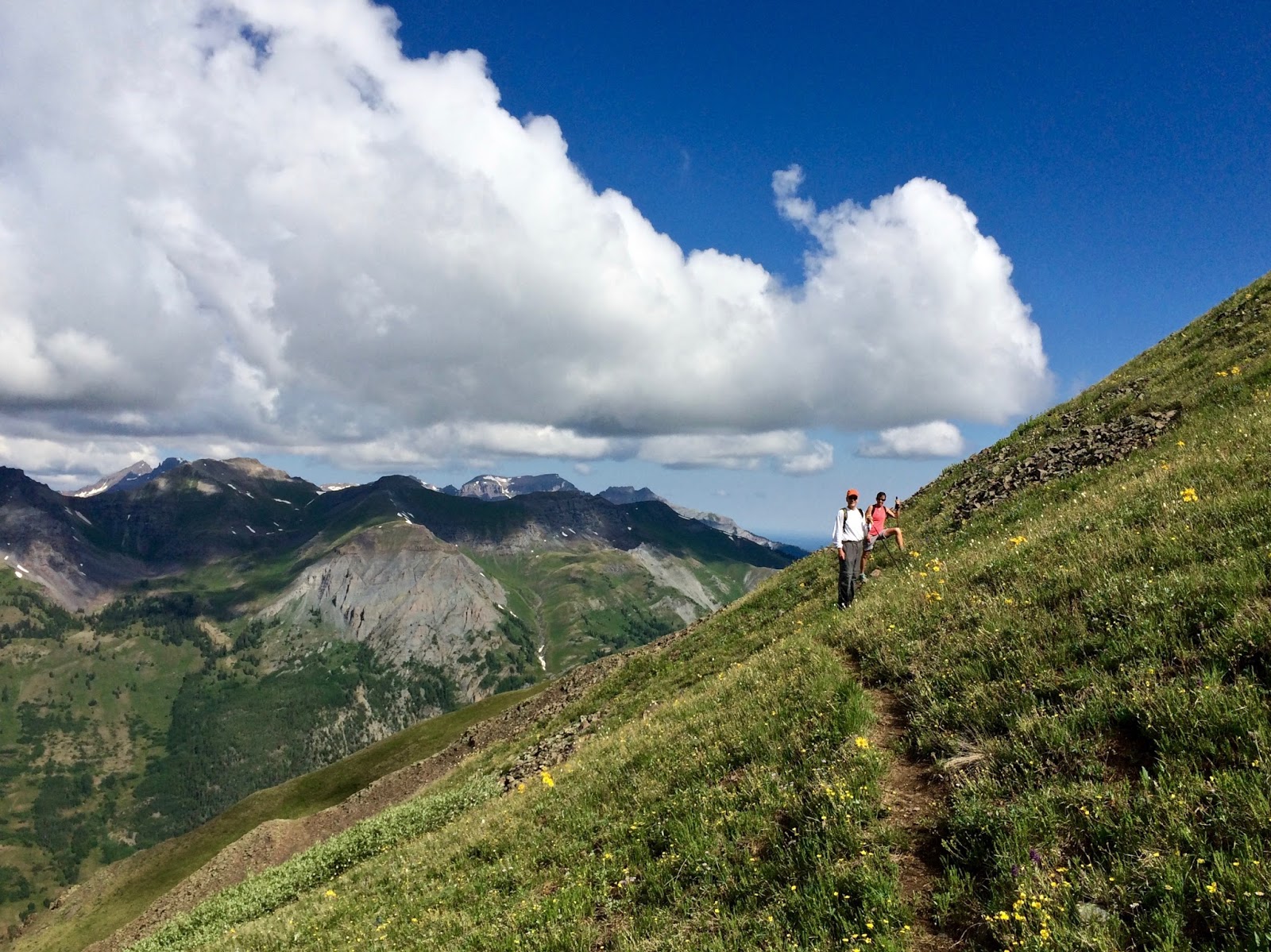 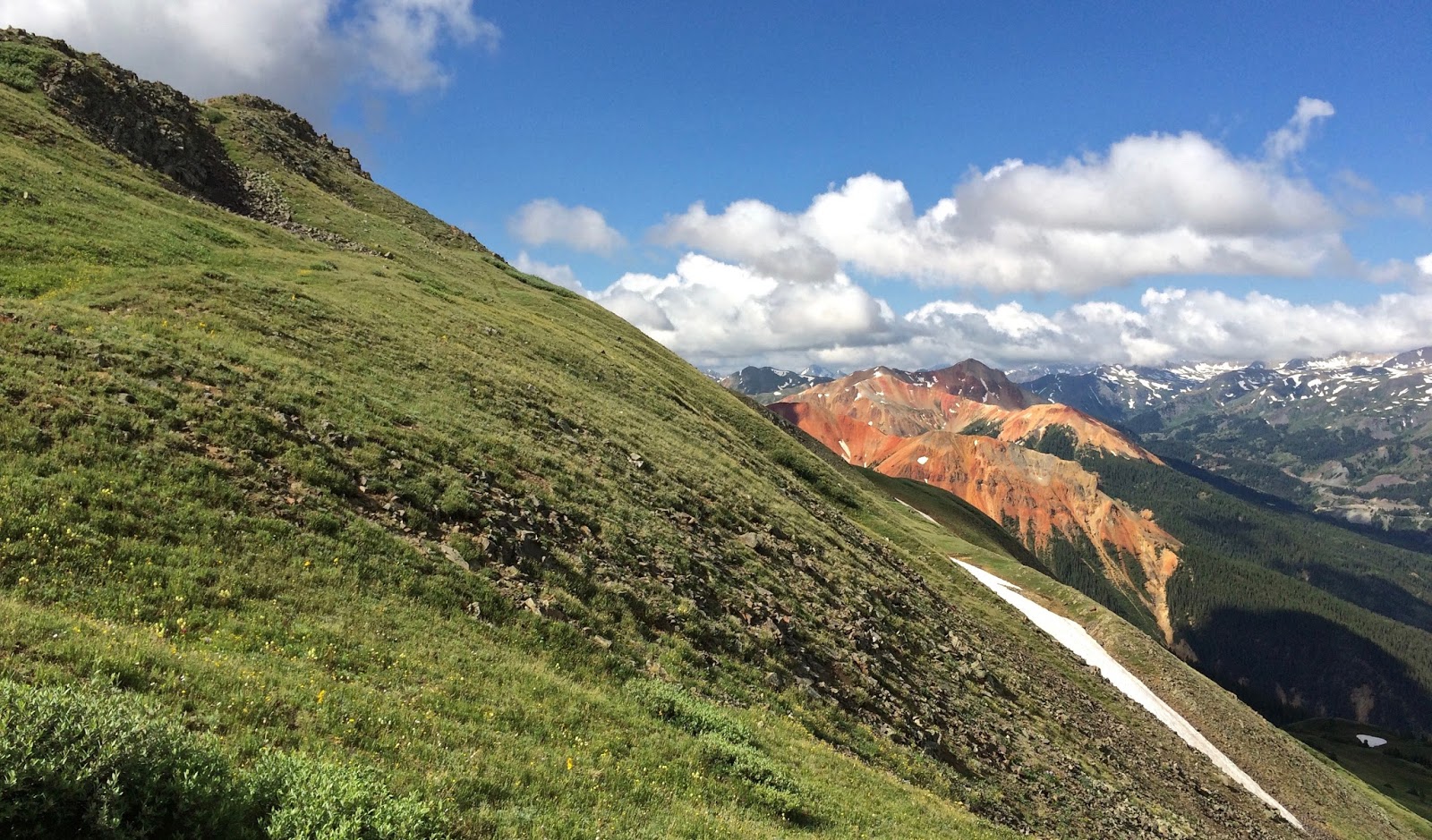 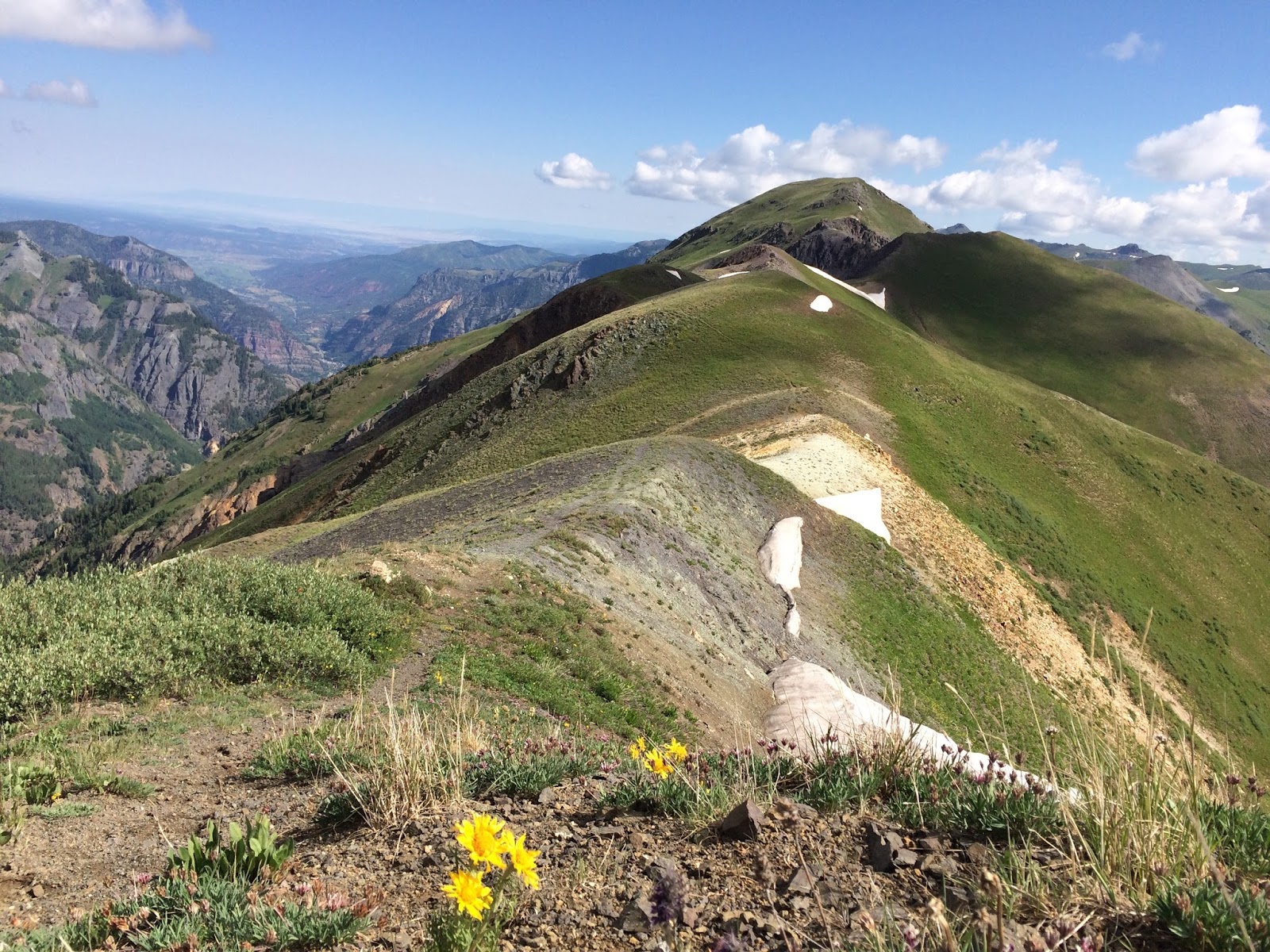 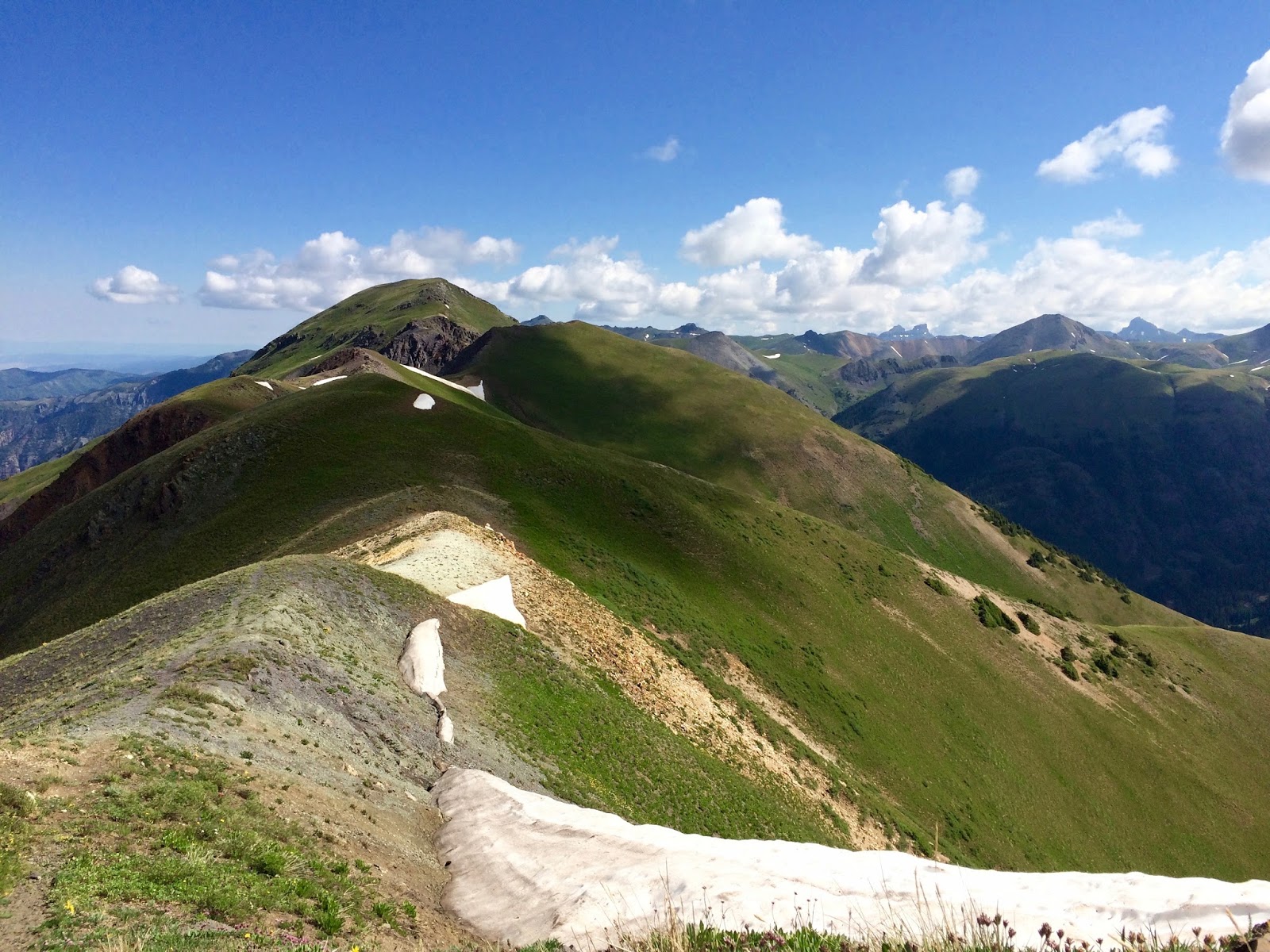 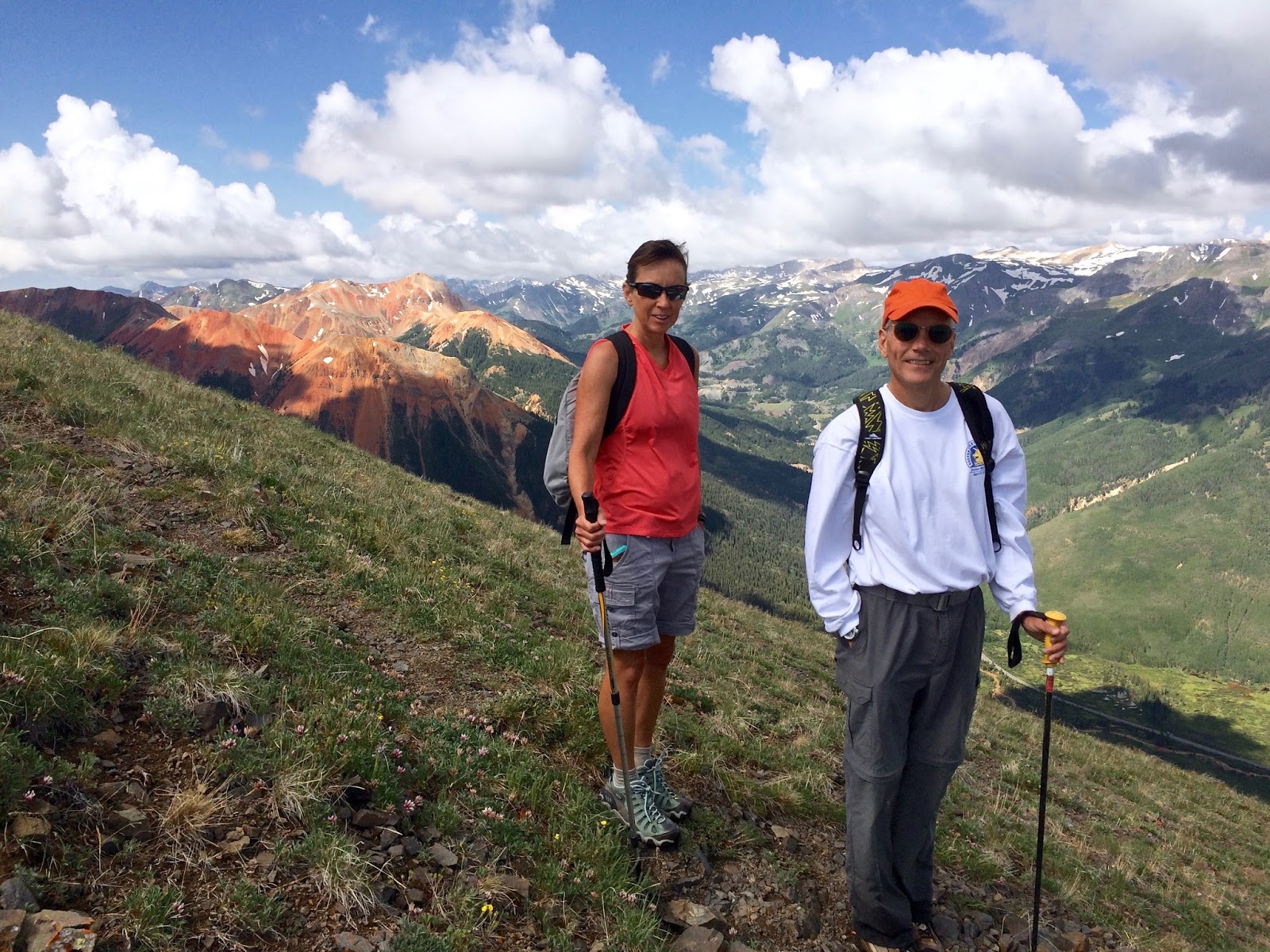 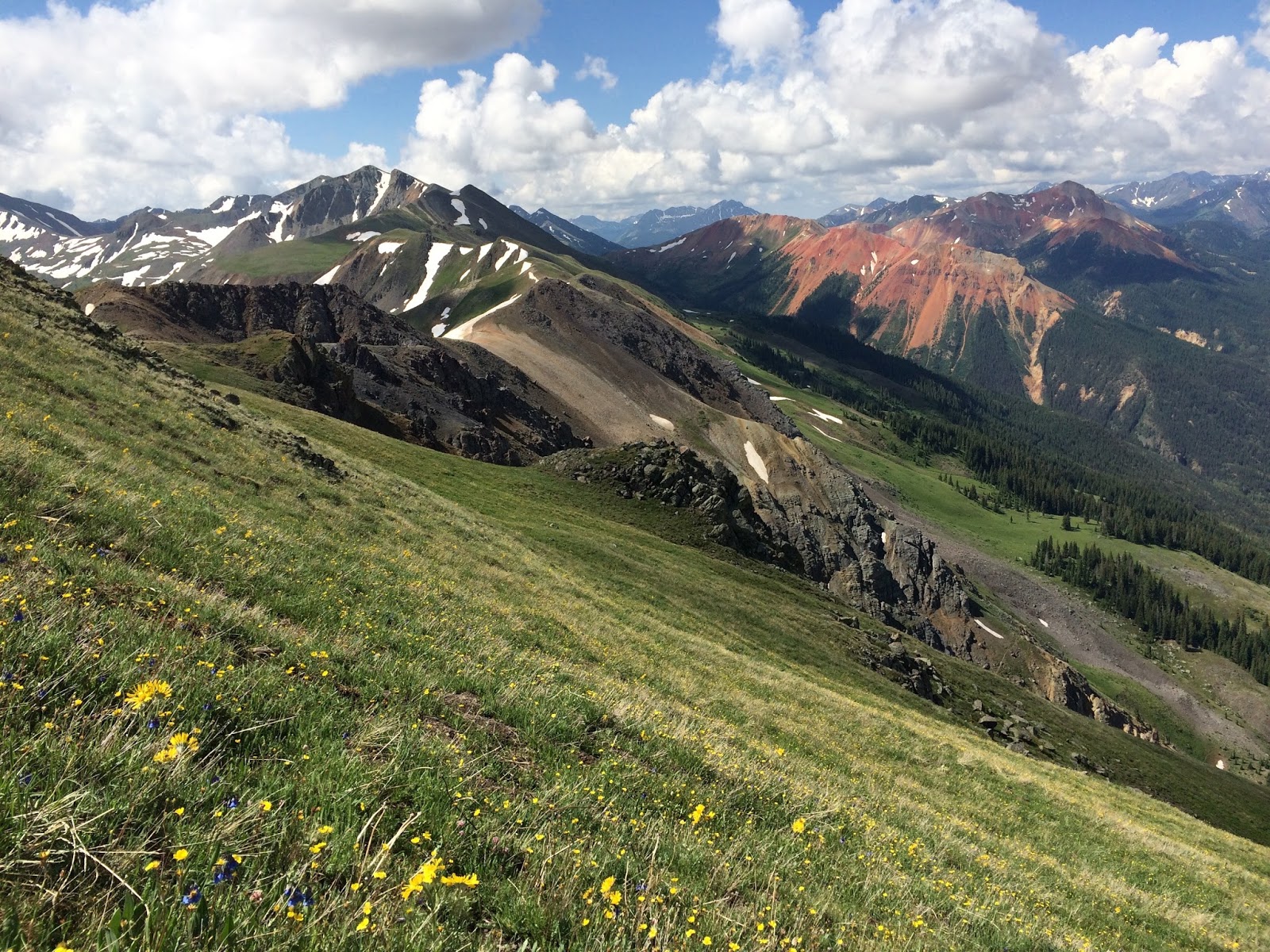 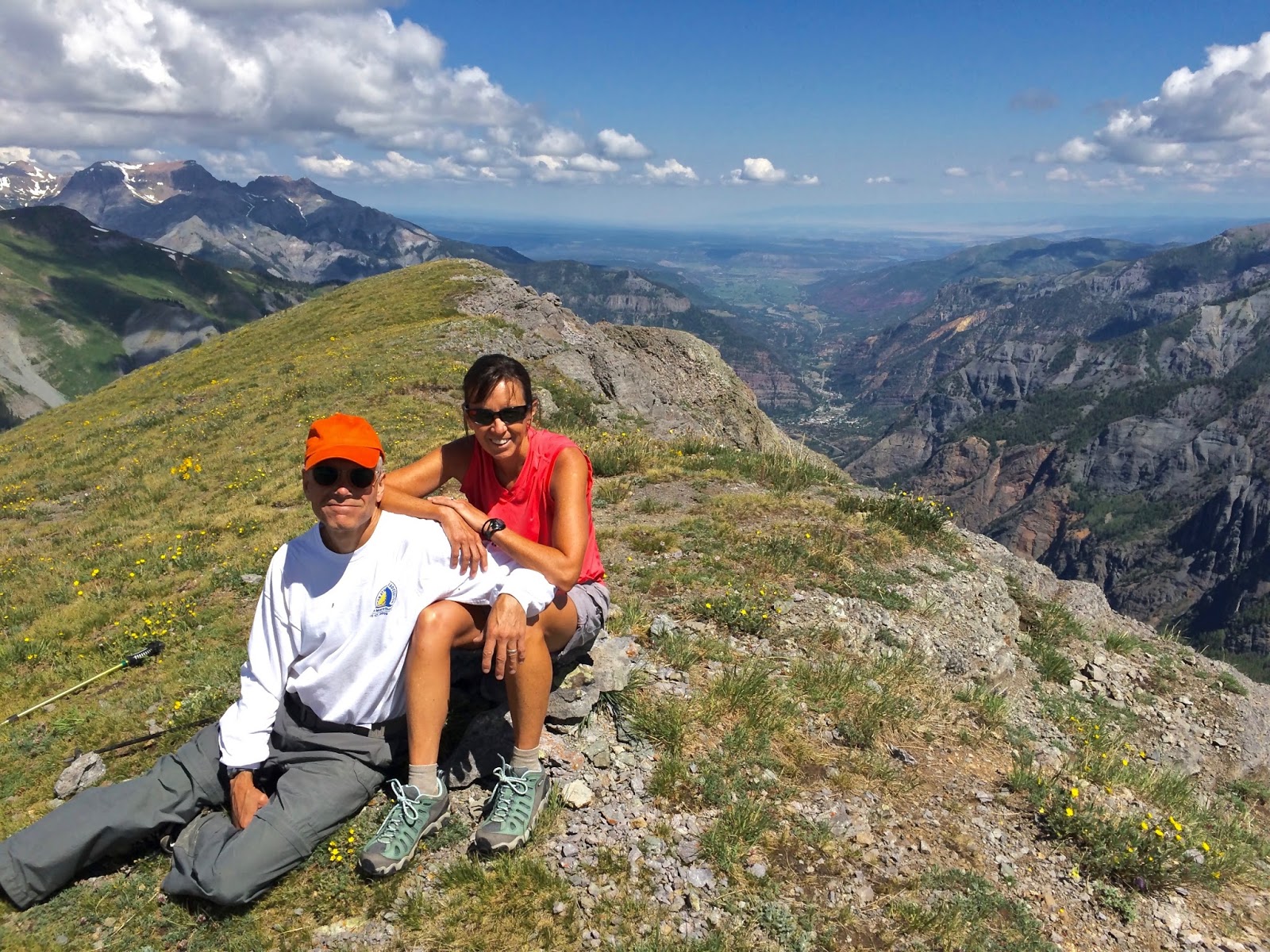 Smiles from the summit, Lovely Ouray nestled in a distant Crevice, and a smattering of puffy clouds. Priceless Memories. 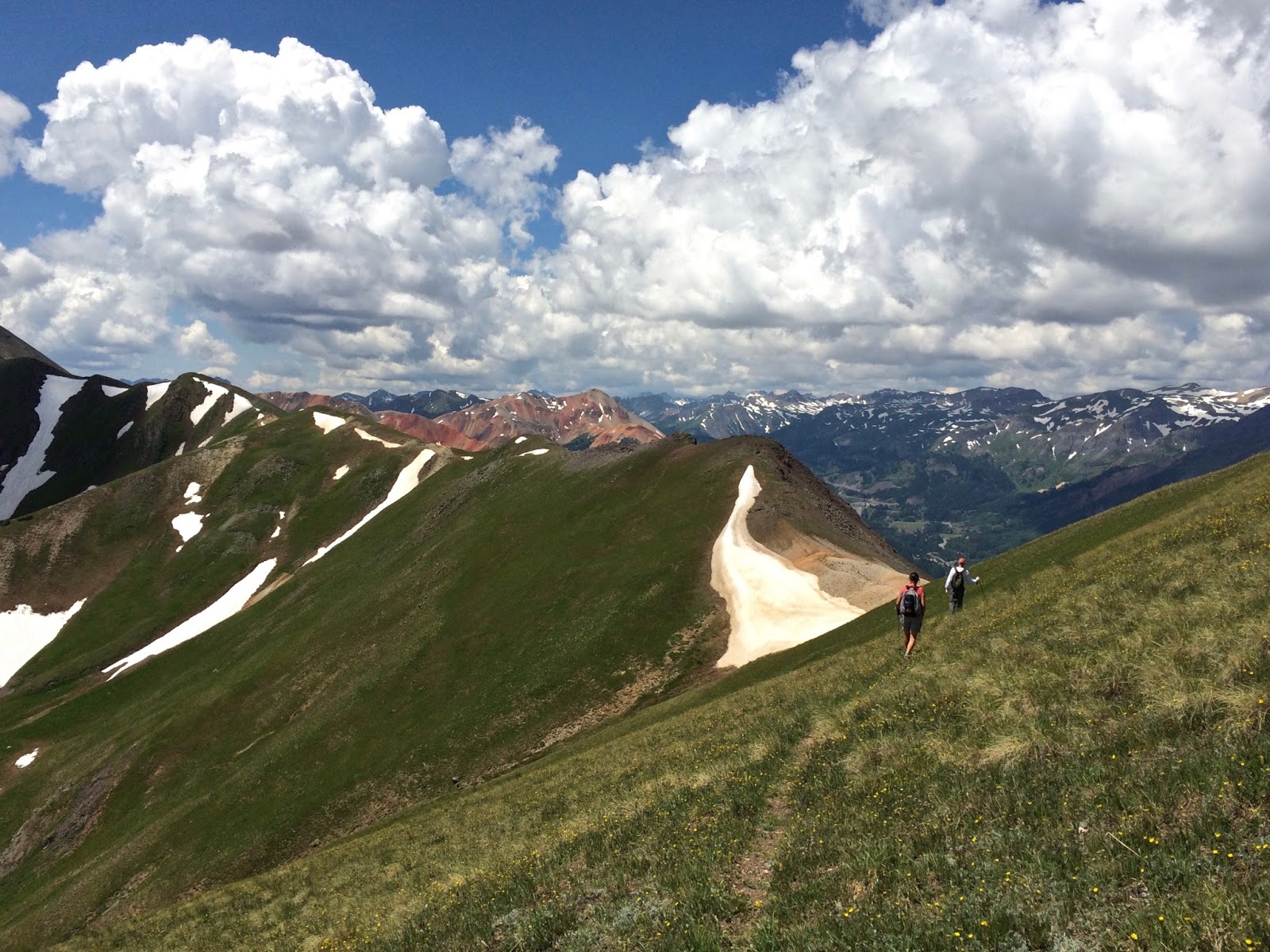 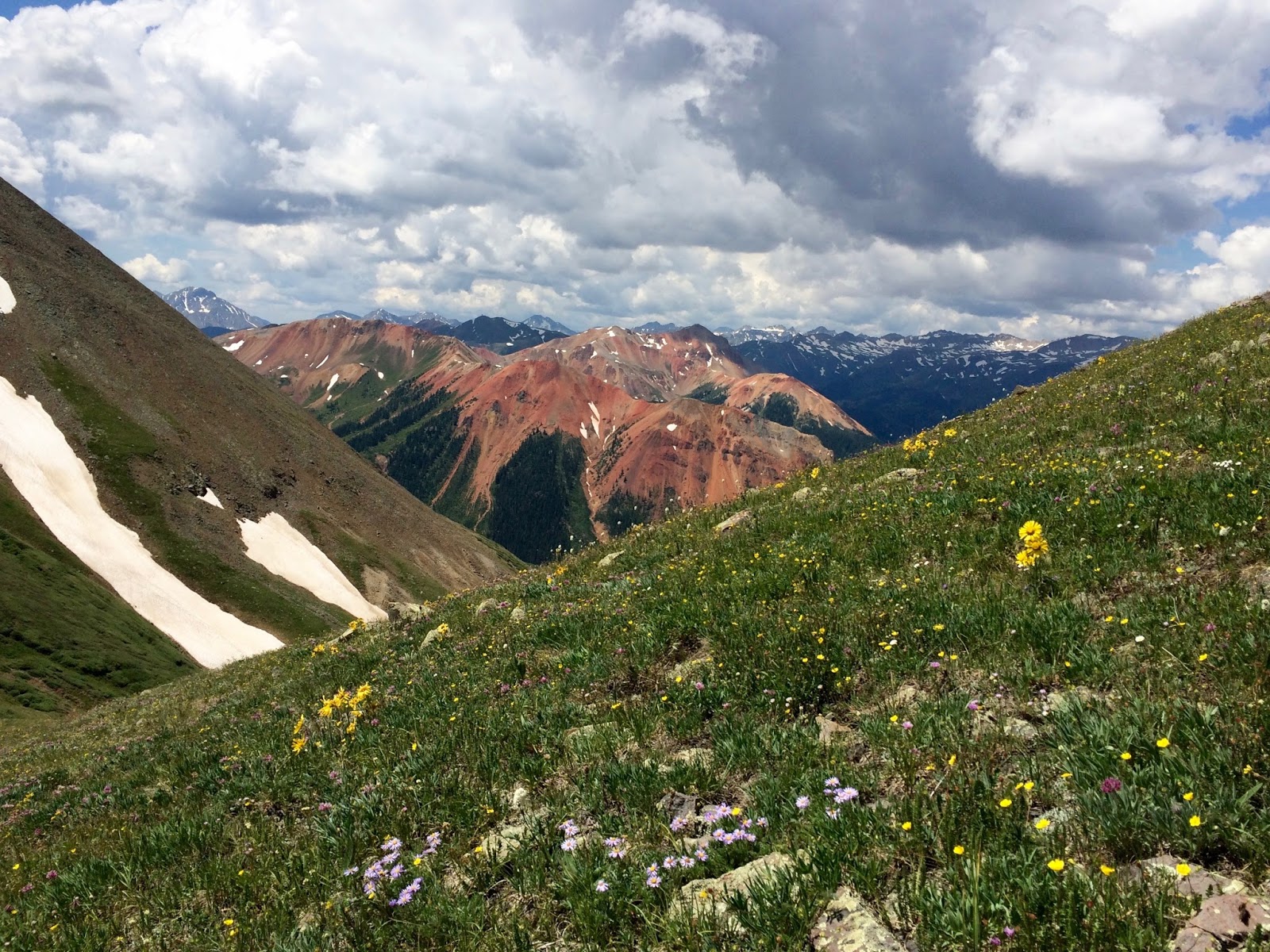 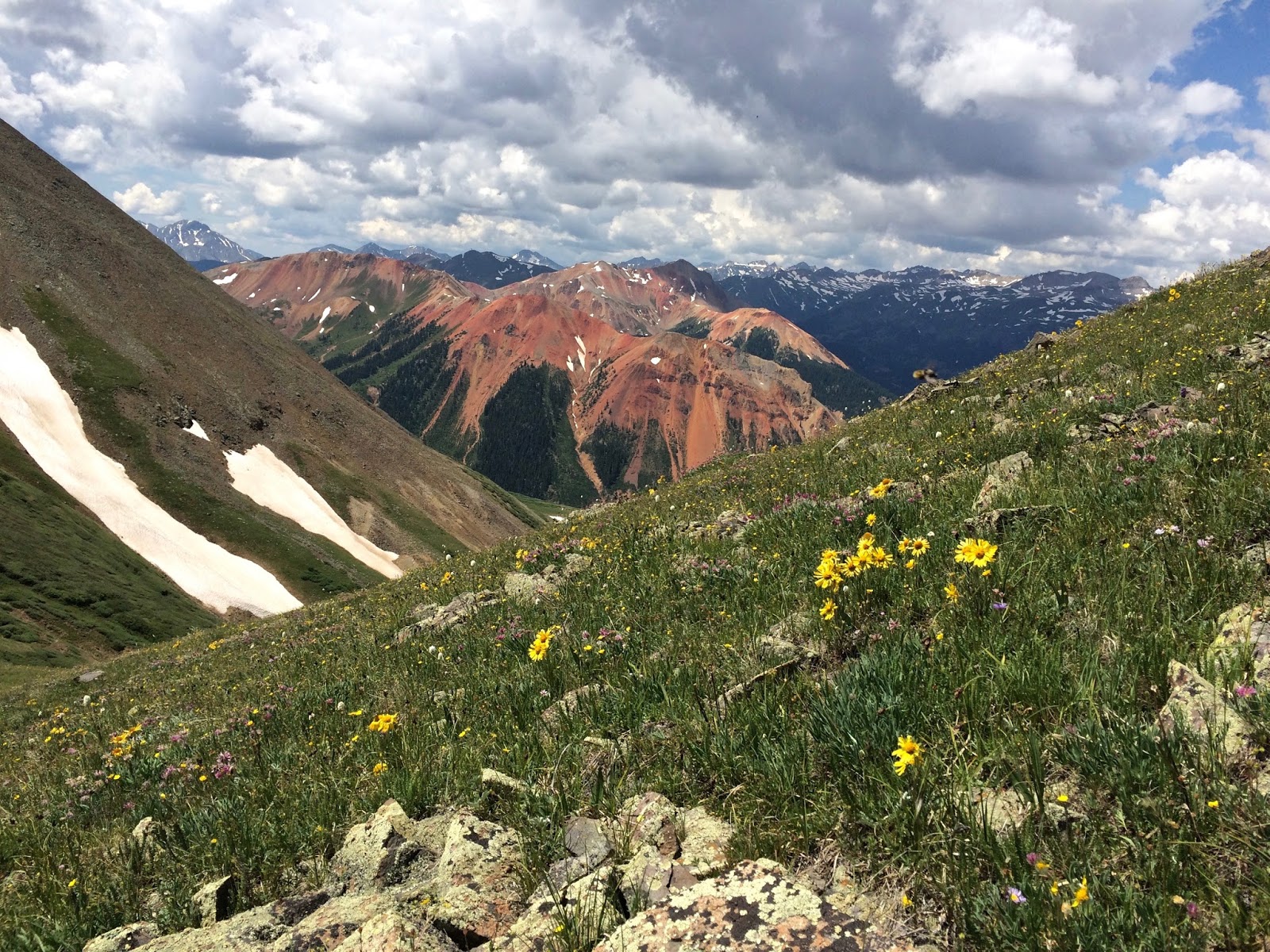 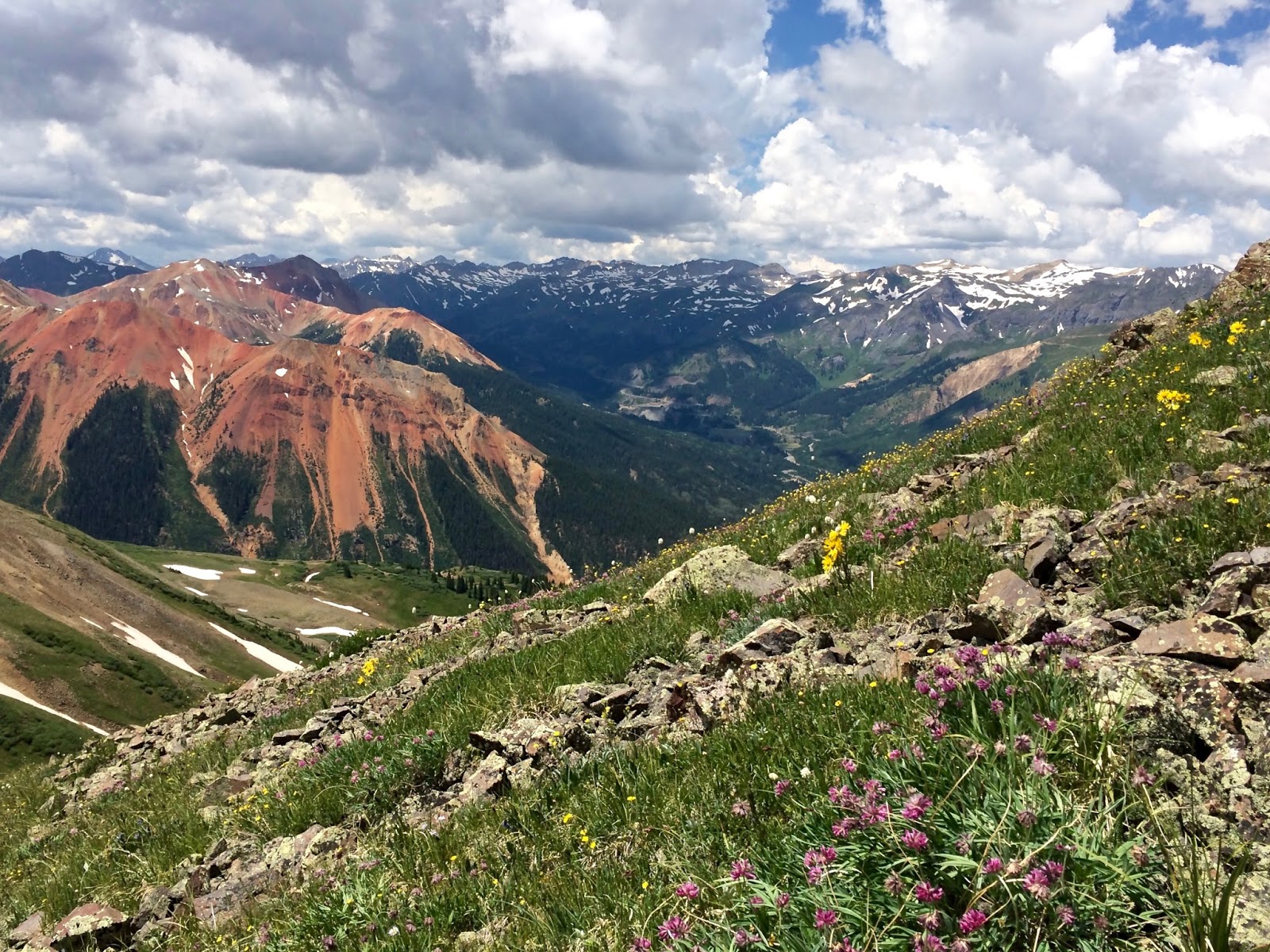 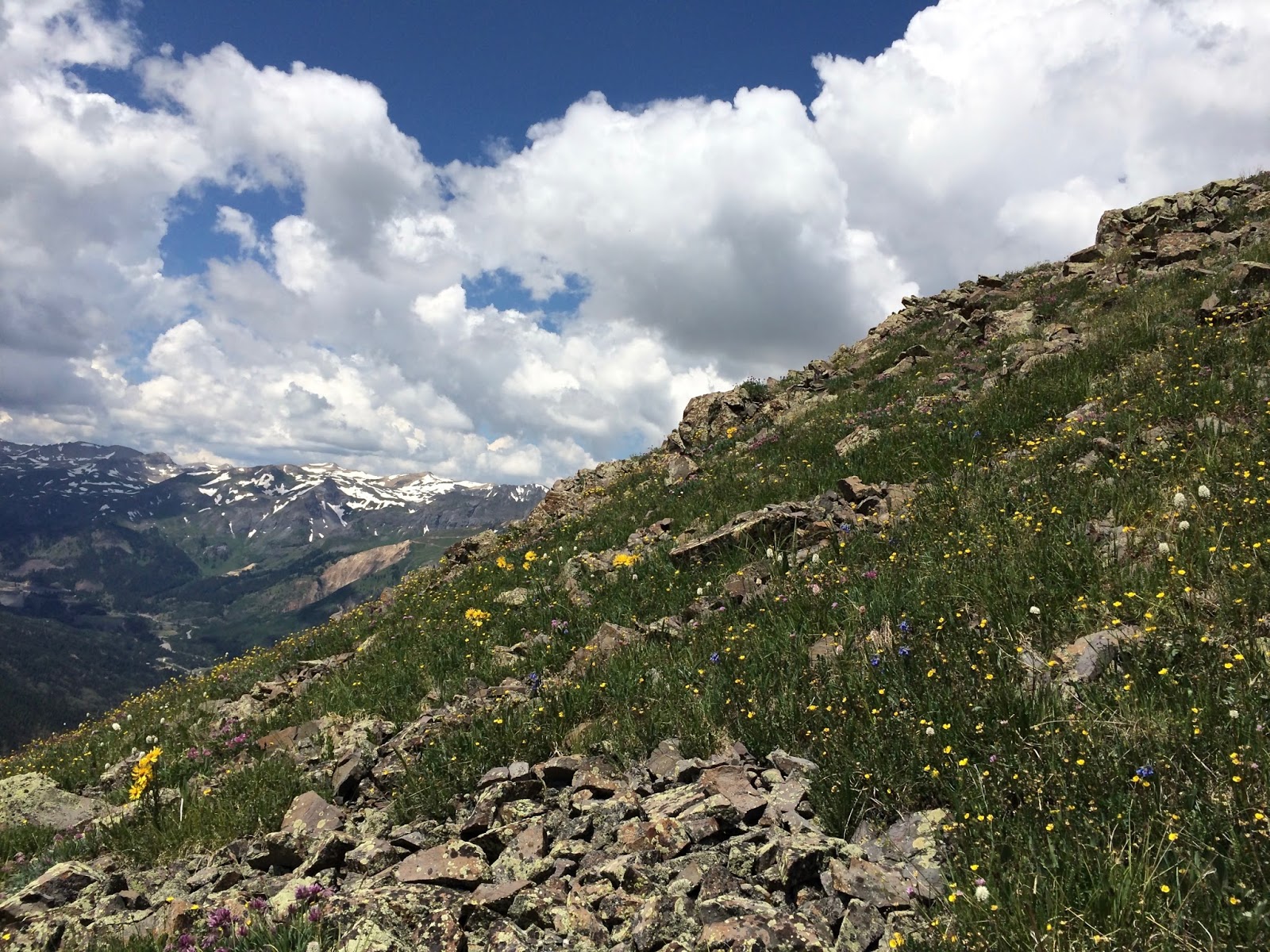 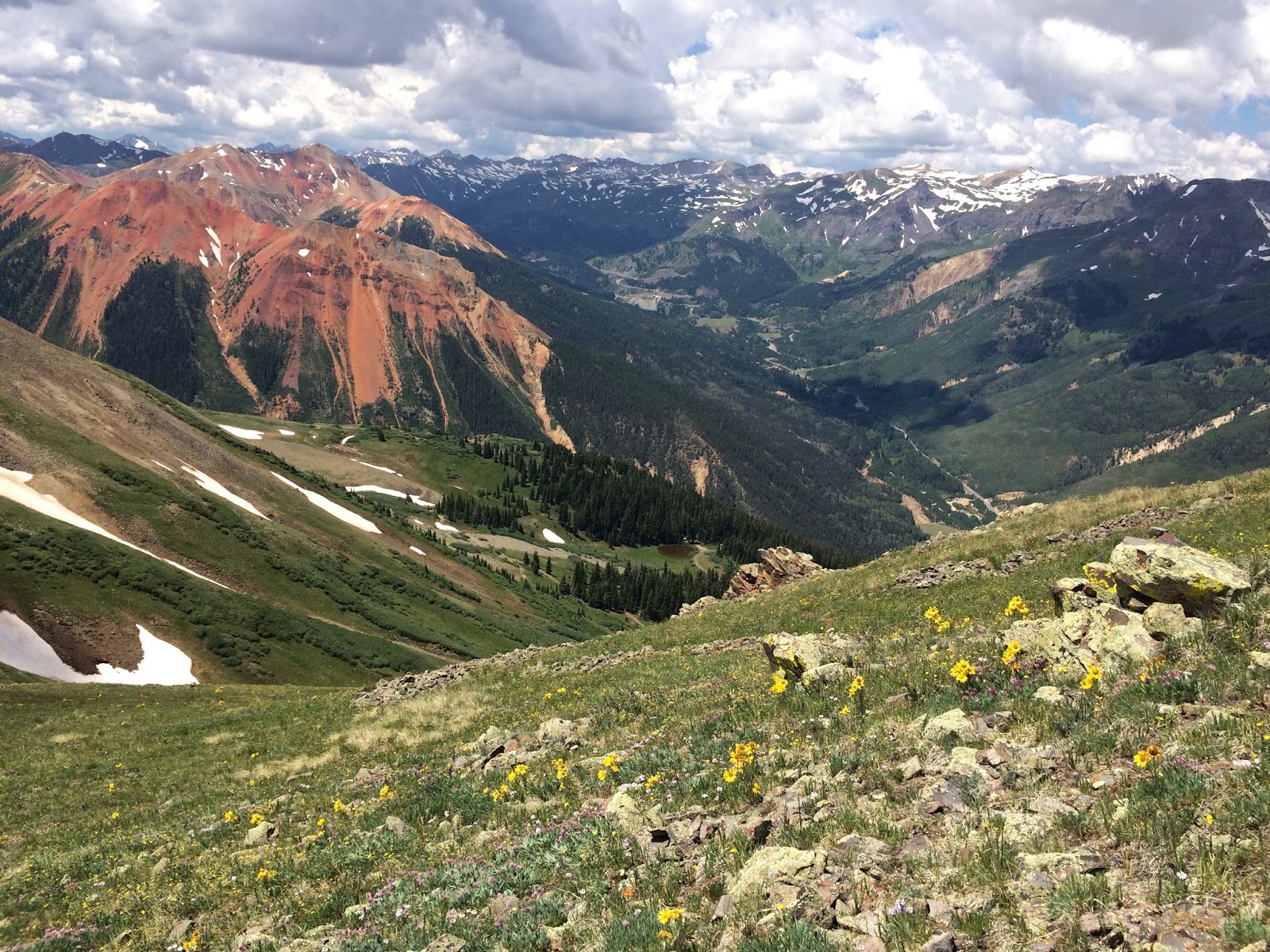 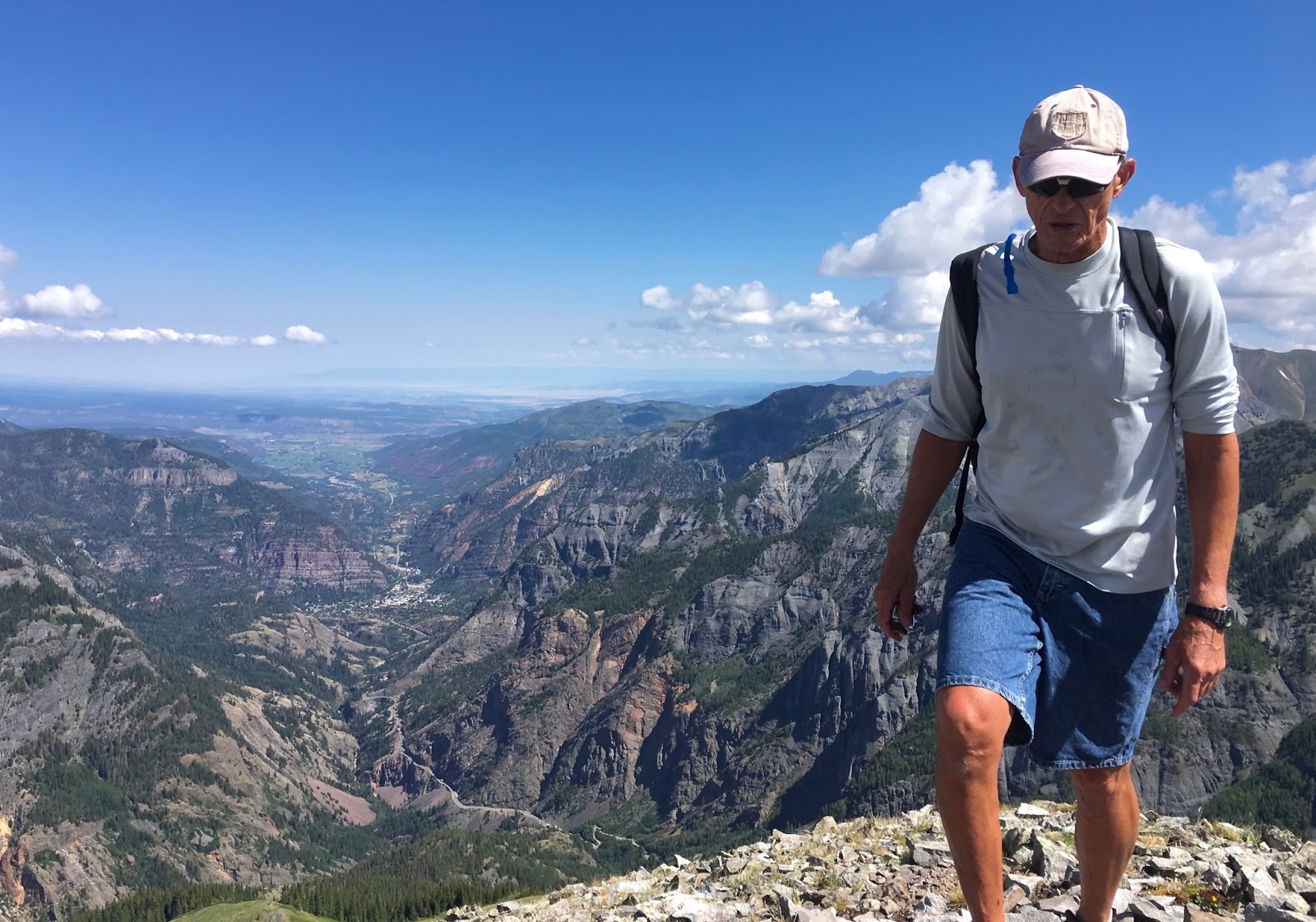 Posted by Box Canyon Blog.com at 8:34 AM