Standing on The Corner of Happenstance and Serendipity 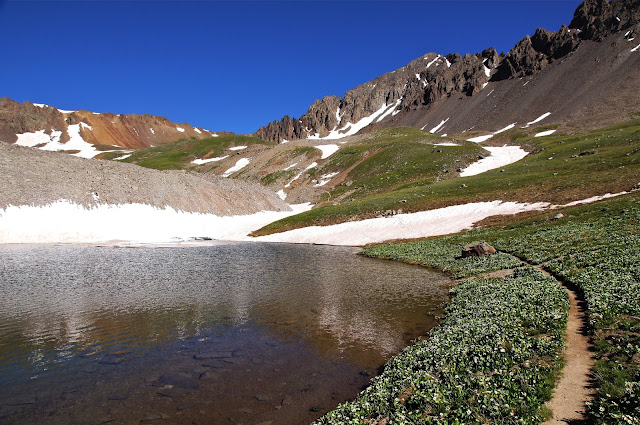 Wanting a long hike, I bailed out of Petroleus Rex near timberline in lower Yankee Boy Basin; 10,800 feet. The air was fresh and cool. Wildflowers blossomed in all shades beautiful, animated by the breeze as if waving a welcome. My disposition was nothing short of excited-bordering-on-ecstatic. A day on top of the world.

A couple of steep miles had me wading Marsh Marigolds along the shore of Wrights Lake. It had an iceberg centerpiece, adrift in glacial green water. From the lake, I barely made out the saddle of Blue Lakes Pass, my destination de jour after scrubbing Mount Hayden's snowy north face.

You can see the "pass" in the lead photo, where rust-colored ridge line meets dark formidable spires. Directly behind the needled ridge, a faint trail leads to a heady alternate route to the summit of 14,150 foot summit of Mount Sneffels. Bobbie and I attempted to find it a couple of years ago and got cliff-ed out on an airy ledge. 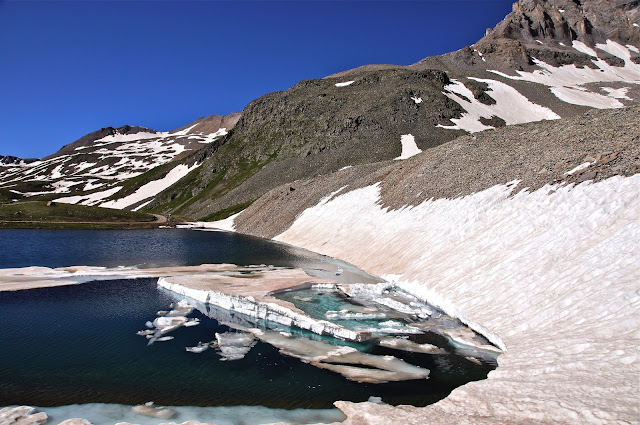 With no real threat of thunderstorms, I had the entire day to roam as I pleased. I tossed around the possibilities, things like going over the pass and down to the uppermost of three Blue Lakes. Should have brought the fly rod! Or maybe I could find the "heady" route to Sneffels summit this time. Hmmm, better not. I've heard it has some class 3 shit and I'm flying "solo" today. I followed my undecided nose to the pass. 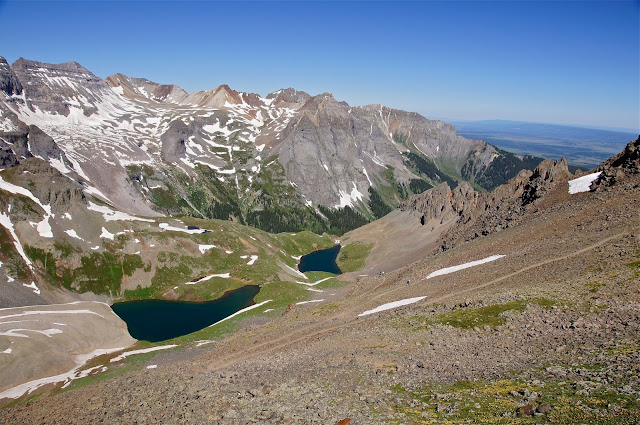 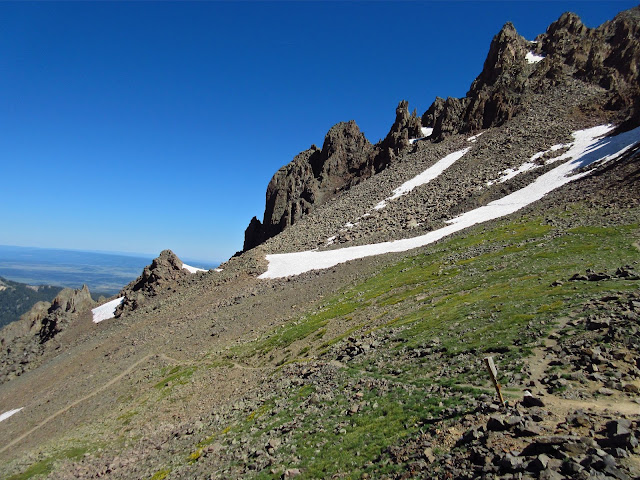 My big DSLR quit working. I looked at the screen, "Battery exhausted." Time to go.  I made my way down Blue Lakes slippery switchbacks; noted the time. The day was still young and I had reserves of energy; what to do?

At the bottom of the switchbacks two trails intersect: Straight ahead takes me back the way I came, a left loops me long-way-around, past the popular approach to Mount Sneffels, then on down a Jeep road where it rejoins my route up. That would add some miles. Go left :)

I found considerable amounts of snow in the upper basin, more than at this time in previous years. As the trail swung toward the mountain, I was teased by the idea of adventuring up the tumble of scree that is the traditional approach to Sneffels. There would be far too much snow in the couloir to safely summit, at least without an ice ax and crampons. But I could climb up to the saddle... maybe have a look at the couloir just to be sure.


I felt a little tug on the heartstrings. How long had it been since my last summit on Sneffels? Six, maybe seven years? After 20 some years of bagging 14'ers, Bobbie and I decided to call it "good" at 50... a nice round number. Peak bagging 14'ers was becoming too popular; there was often a line going up the mountain and a crowd on top. So we switched to 13'ers where we could be alone on top, and never looked back.

Still... Sniffels is right there, and only four or five people struggling up that I could see, plus a few coming down. Next thing I know I'm climbing... just to the saddle, though...  you know, just to have a look around. 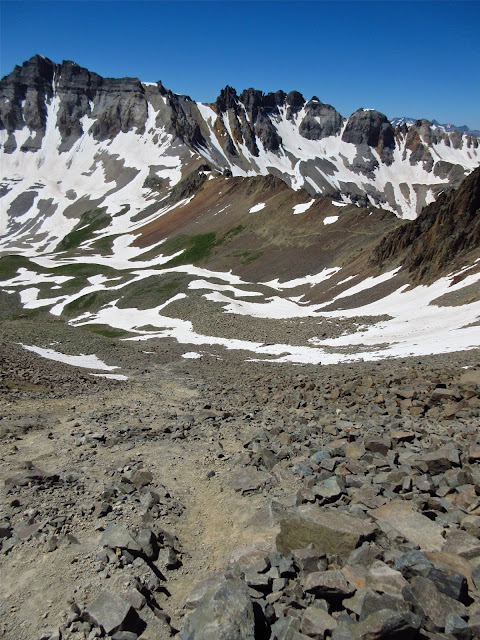 Thirty minutes later and about half way up the "active" slide of rocky scree (active meaning rockfall triggered by careless climbers above) I paused to catch my breath and look around. It appeared that I was already above Blue Lakes Pass. 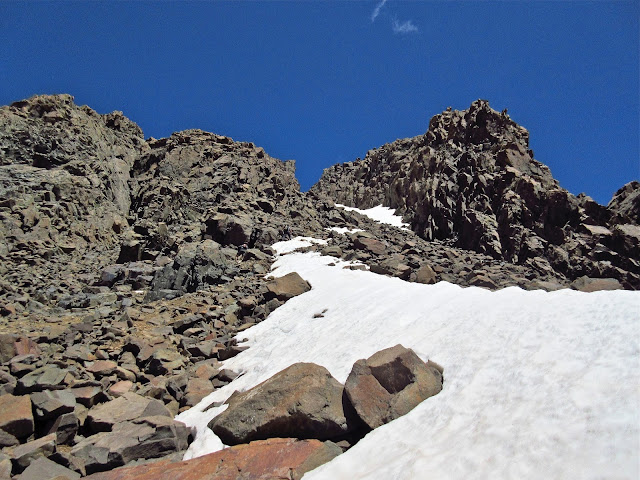 All second guessing went out the window as soon as I reached the saddle. It took nearly an hour of continuous struggle, but mission accomplished. Climbing over and around boulders the size of VW's, I made my way up the steep couloir to have a look at both the view and remaining snow. Down-climbers had warned me that it was "too dangerous." Some had turned back, but most said they were able to summit by climbing up out of the couloir to the left on the ridge, some "class 3 shit in places, but doable without ropes." Ok... 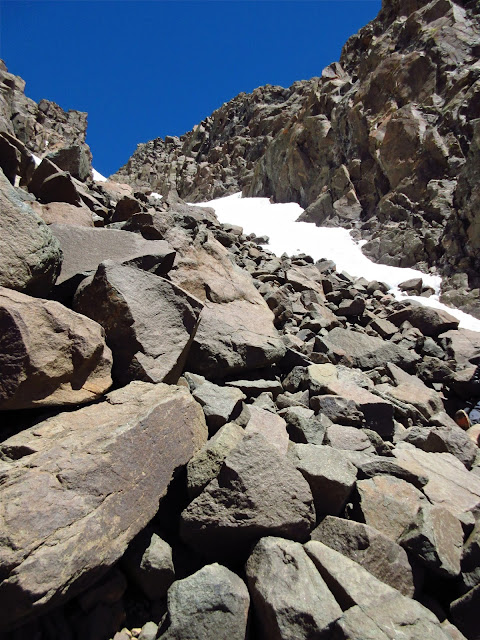 I ran into Wayne, a fellow climber retreating from the couloir approach in search of a "safer" route. Wayne hails from Portland, Oregon, and was visiting Colorado on a peak-bagging "vacation," nine 14'ers in seven days, to be exact. He was living out of the back of his 4X4 Tundra pickup. 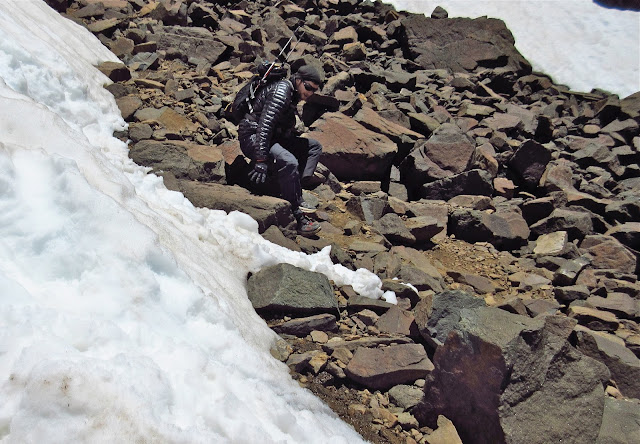 We found the "couloir bypass" route pretty much straight up, somewhat exposed, and a tad airy. It was no place to be fumbling with a fucking camera so I have no photos. Beyond that it got better, with a couple of exceptions.

Once I had to leave Wayne, a younger, more experience climber, in order to down climb from what I thought was turning into a "sketchy" route. A fall there could land one on a near vertical stretch of snow that would rocket them off the uncaring mountain in short order. A lovely way to go, all disease considered, but not today, thank you.


Finally, with all the "class 3" shit behind us, we made quick work of the last 300 yard push to the summit... a little sure-footed bouldering to avoid snow, interspersed with loose footed scree scrambles. 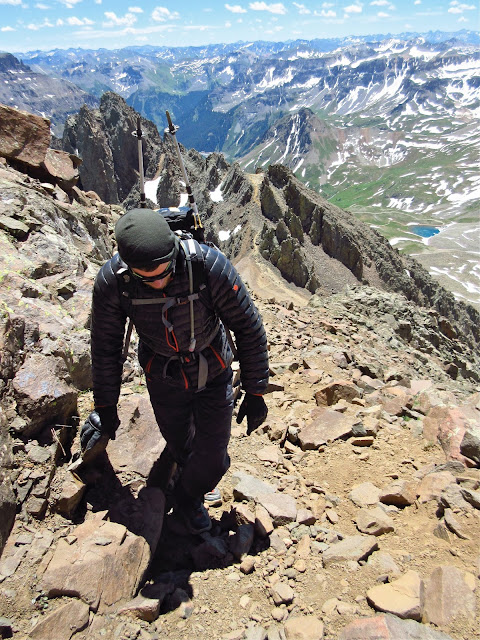 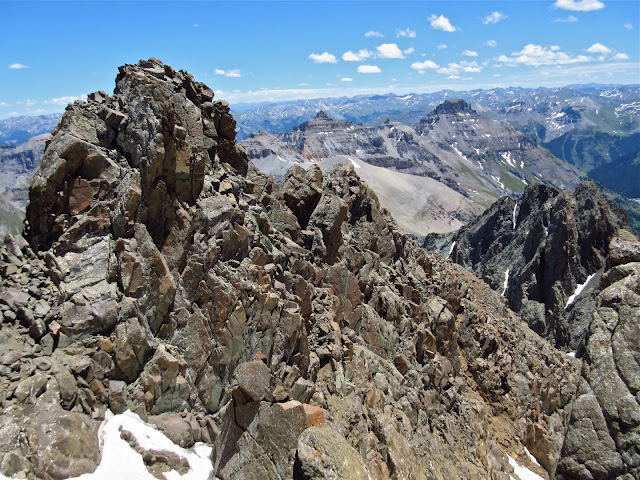 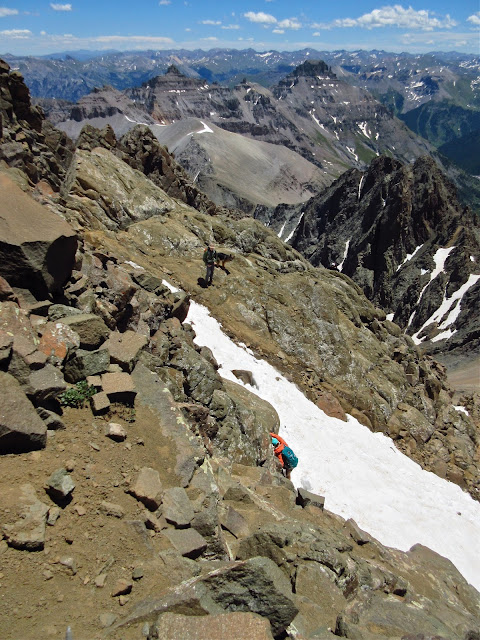 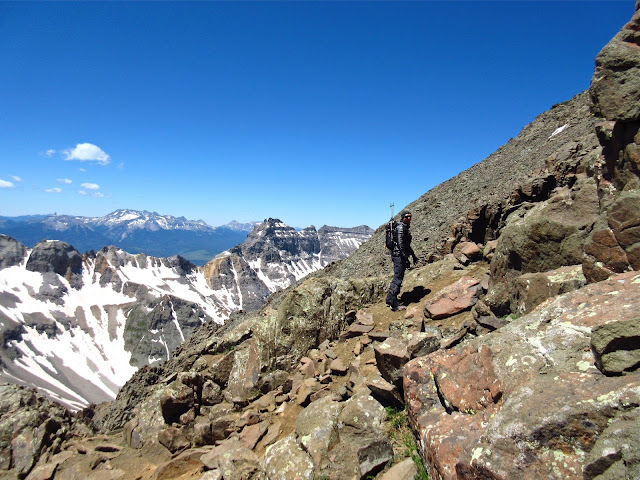 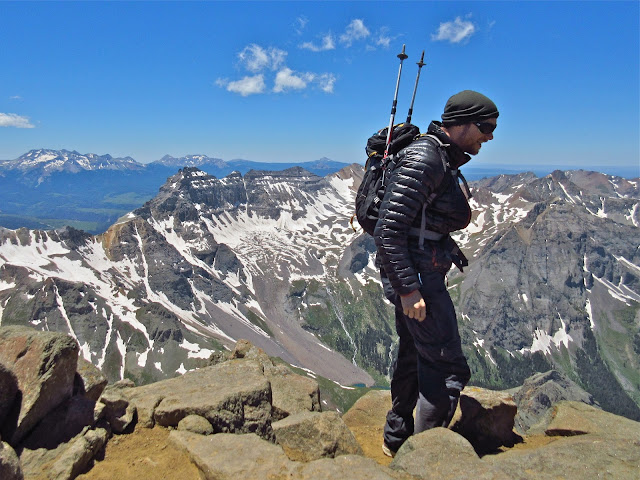 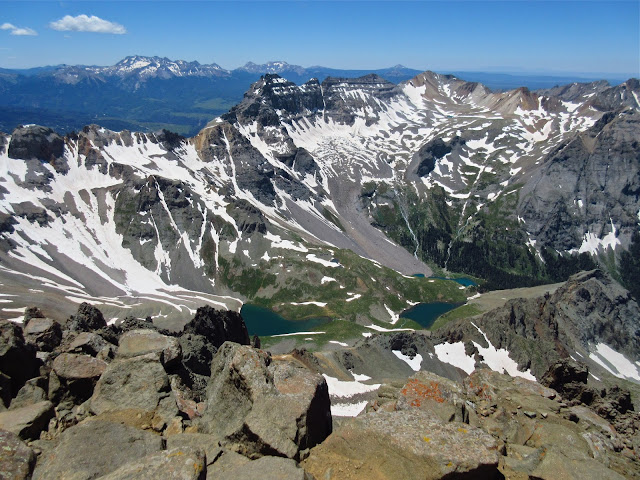 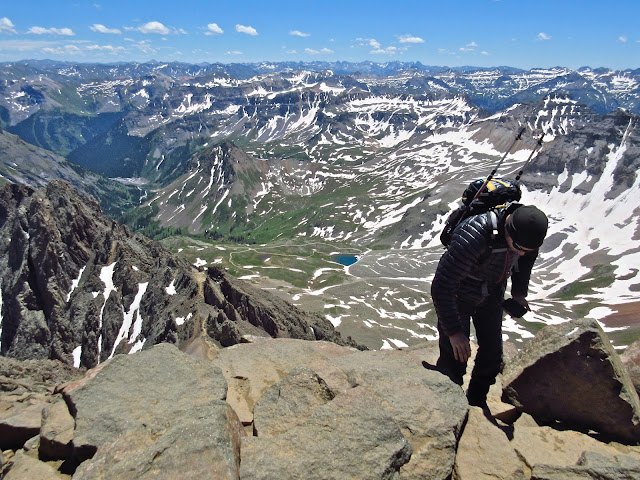 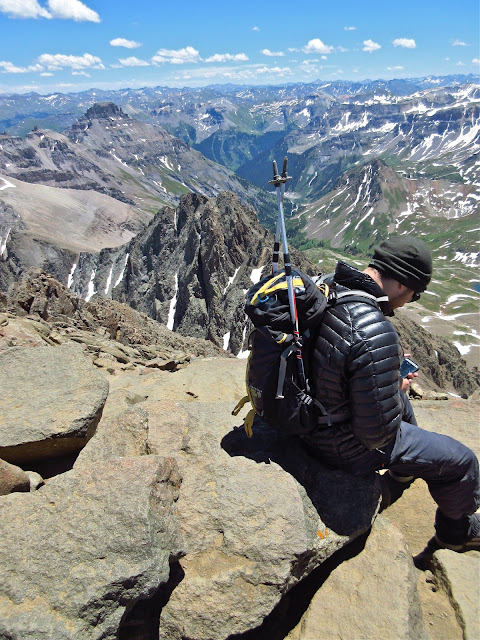 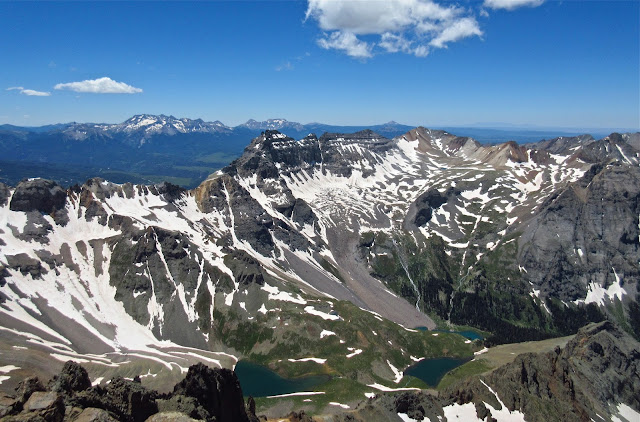 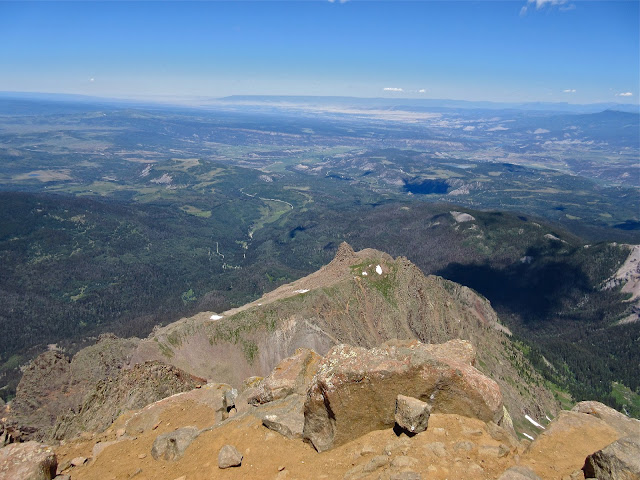 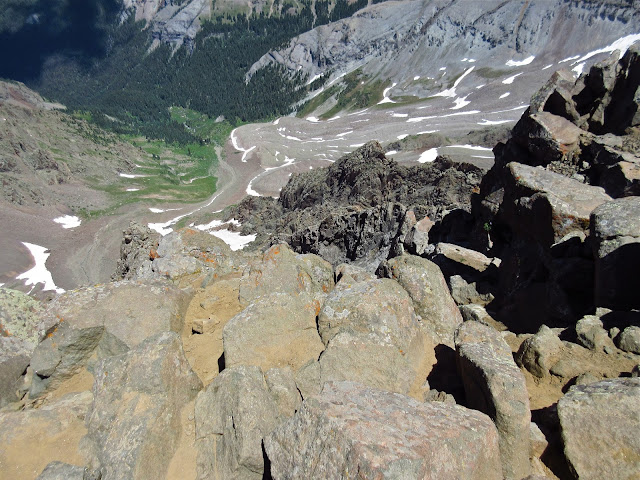 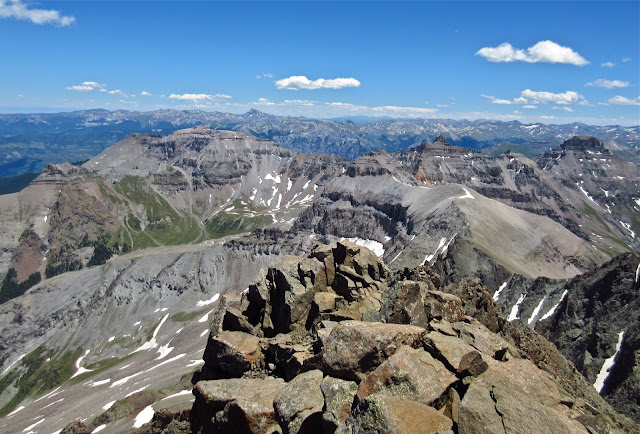 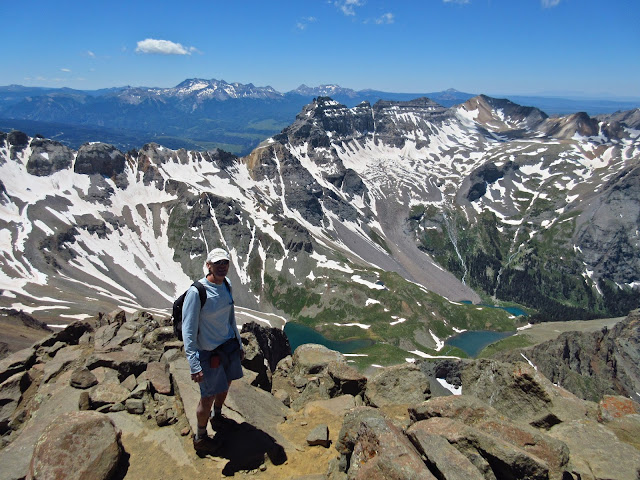 It was hard to get comfortable on top, no place to hide from the wind. I called Bobbie at work to let her know where I ended up and that I was about to start down. She was surprised, wondering, no doubt, what the hell I was doing up there when the note I left on the counter said I would either be climbing Hayden or hiking Blue Lakes Pass. "How was it?" she asked.
"Well, let's just say I feel extremely alive at the moment. It doesn't get better than this. I only wish you were here."

Wayne started down. I took a few minutes to savor the rare experience of having a 14'er summit all to myself. In the end, Wayne and I took separate routes off the top, but met up again running the ridge down to the saddle. It's always more difficult going down... reaching with "blind" feet in search of purchase, especially with no one to hold the other end of my rope. 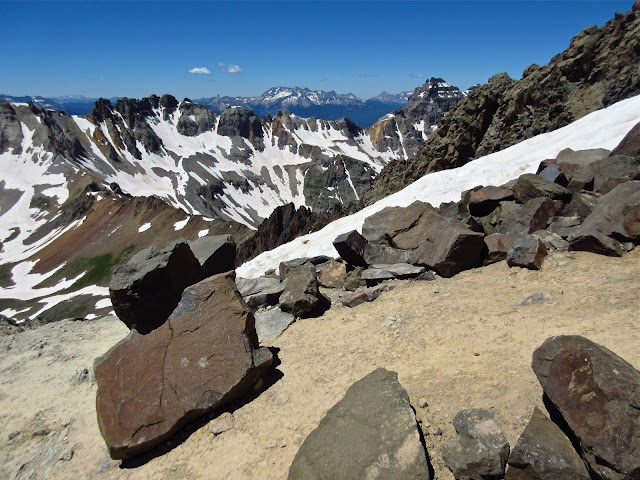 In the end? Yeah, what a marvelous day... so spontaneous and free. I felt like an "accidental tourist," who stood on the corner of Happenstance and Serendipity and caught the bus to nowhere-in-particular. That's one "bus" that never disappoints.

Taking stock, I had made a kindred-spirited friendship with Wayne, a genuine good guy in a world fast filling up with jerks and assholes. It's like he said on the way down, "You meet the nicest people on mountains."

Indeed, pal. Godspeed on the rest of your summits. May they all be as fair as today's.

Peace out,
Time to find another mountain to climb.
mark and bobbie 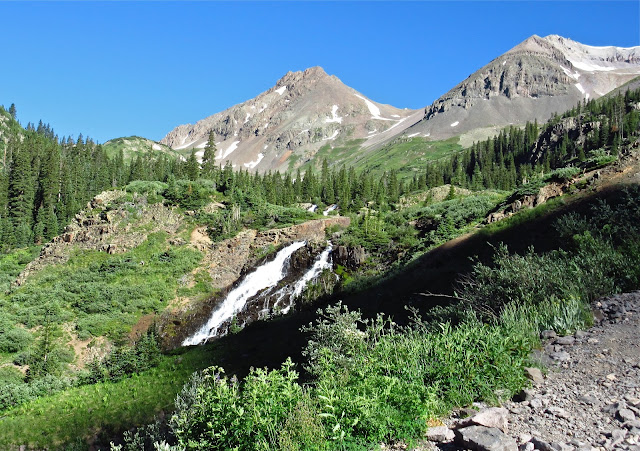