True Grit on the trail to Alpine Overlook 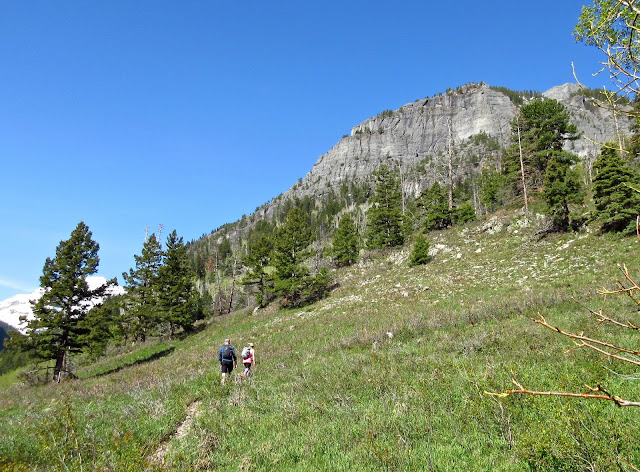 Wouldn't you know, the morning after biking to Yankee Boy Basin, son Caleb and future dotter-in-law Kelli show up and want to go on an adventure-hike. I woke up feeling like I'd been hit-and-runover by an 18 wheeler, but, of course, replied, "Sure, why not." I popped a Tramadol, did a quick update of my Last Will and Testament, and, not that it we could trust it, checked the forecast. It's uncanny. Just when a guy could use a little bad weather, it's nowhere to be found. No excuses, we set off, me bringing up the rear.


Bobbie suggested doing the Weehawken Trail to the Alpine Overlook... 6 miles, 2,000 feet of elevation gain, and a big view payoff at the end.

I don't really care for "boring woods hikes." We had done this one several times over the past three decades and it always left me yawning. Last summer when Jim and Gayle of Life's Little Adventures  were here, Gayle persisted that we should do the Weehawken hike. I whined that it was a boring woods hike to no avail. It's only 3 miles up Camp Bird Road so my opinion was overruled by "convenience."

Well whadaya know. Turns out Bobbie and I had never made it all the way to the overlook for some odd reason which neither of us could either recall or figure out. The view from the overlook makes it a worthy destination, and now it's one of our favorite hikes. Thanks to Gayle :).

The trail switchbacks up through a mixed Aspen/conifer forest. Views really aren't that bad... 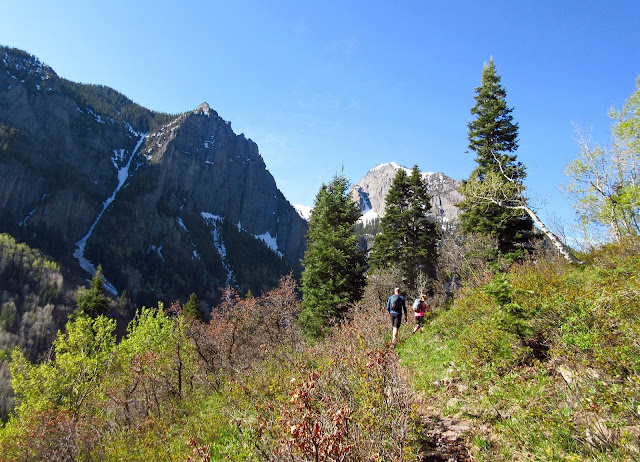 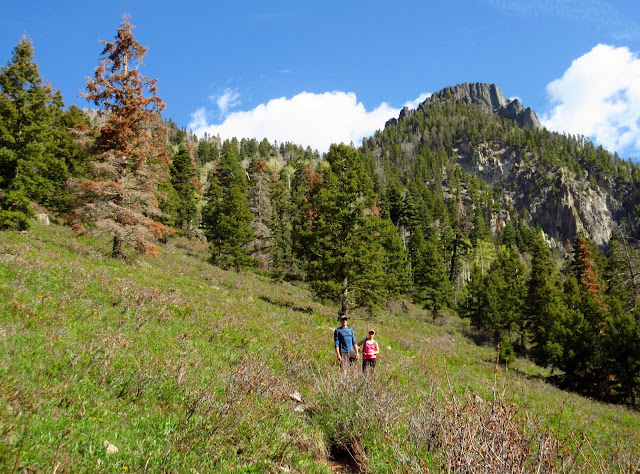 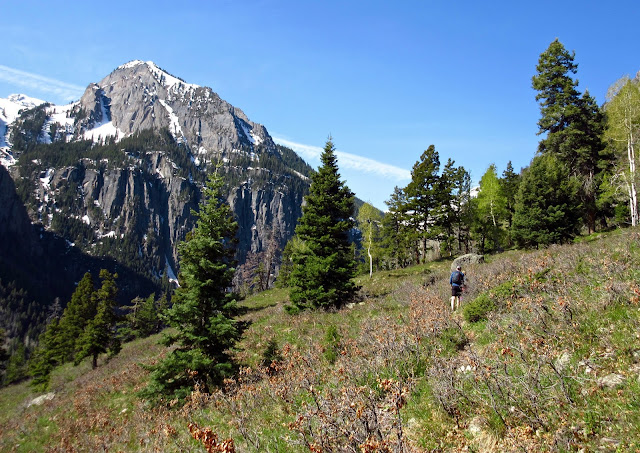 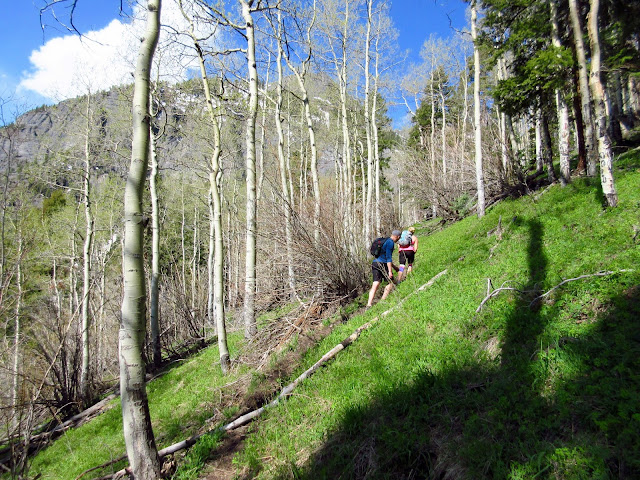 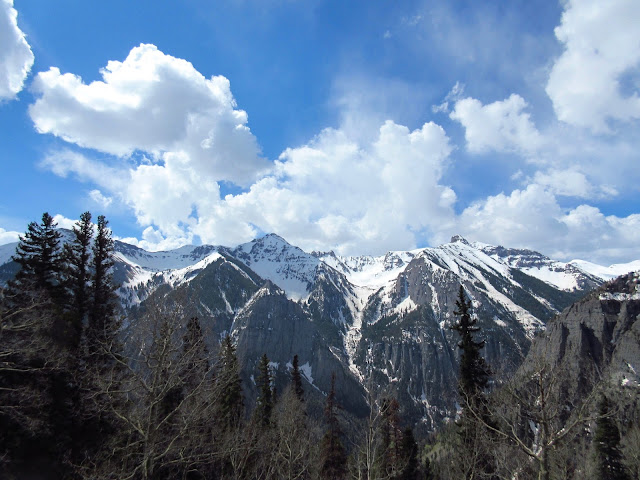 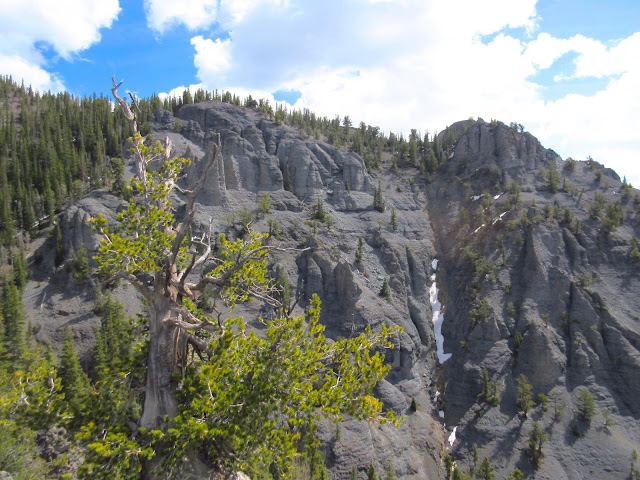 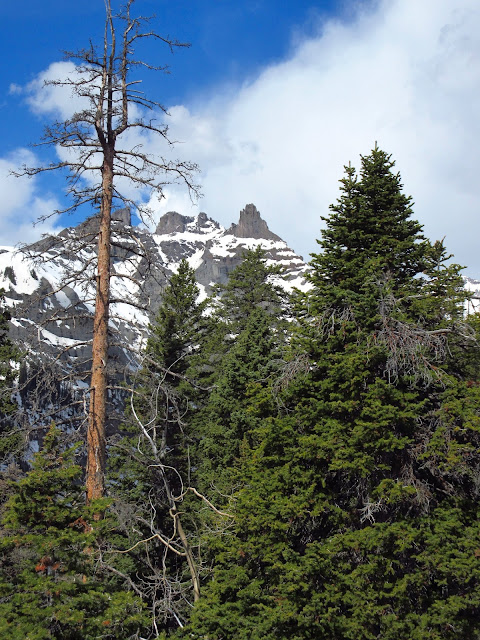 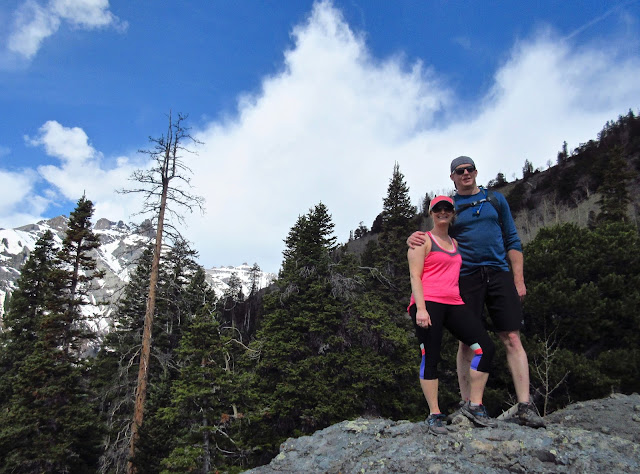 We met two separate couples and a solo hiker coming down that told us they were turned back by sketchy section of deep snow on a particularly steep slope where, if you slipped or it gave way you'd be in deep doo doo. Ah, shades of Twin Peaks. After promising Kelli and Caleb a "dramatic view," I thought we'd see for ourselves just how bad the crossing was. 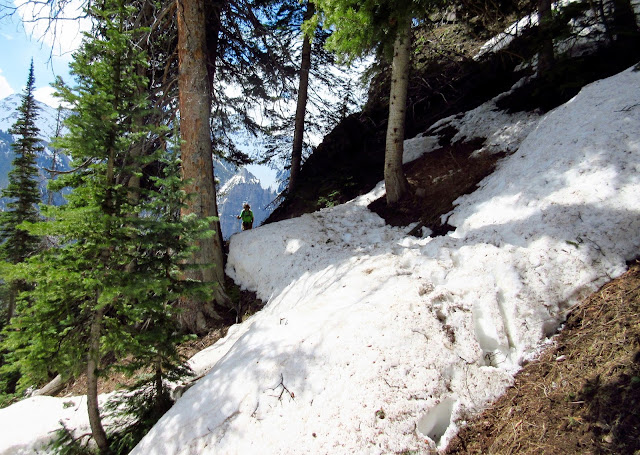 We ran into the White Plague about half way up, snaking threateningly across the trail like some sleeping albino anaconda. 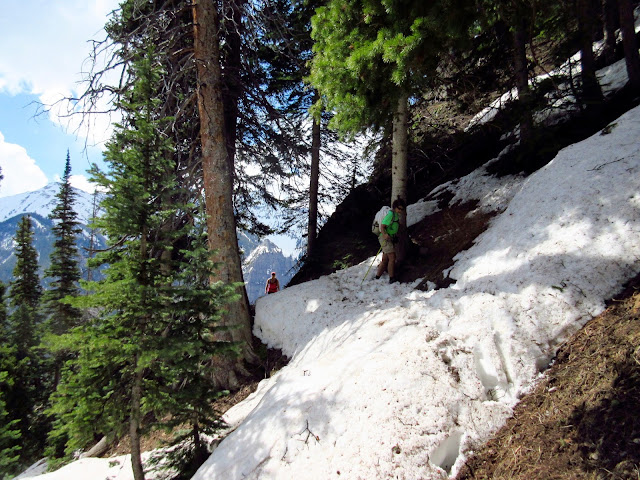 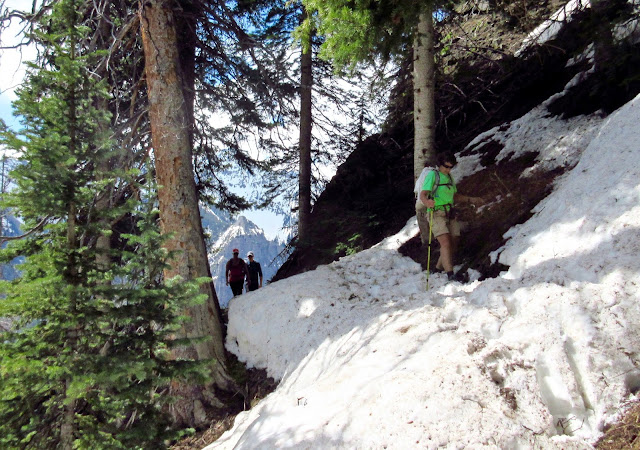 The snow was pretty firm so we pressed on, eventually making it to the inclined "snow shed" that had turned hikers around. It was untracked except for a couple of elk; no one had attempted to cross it... for good reason. Caleb thought we could break a trail across. I overrule, in favor of "live to hike another day." It was too risky without ice axes to arrest a potential (probable) slip and fall. Disappointment sets in. We can see the overlook at this point, less than a crow-fly mile away. 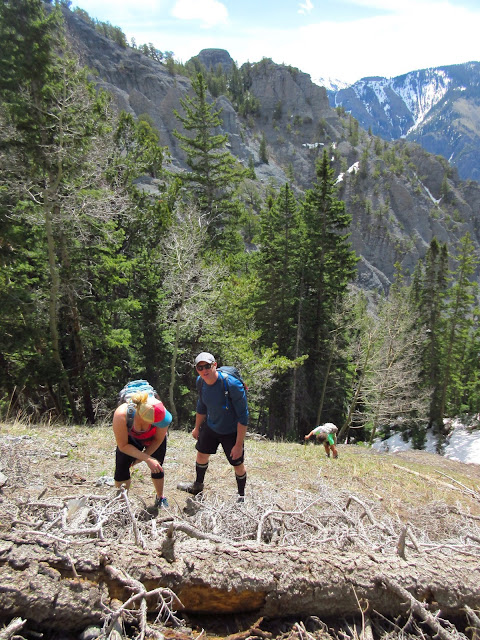 It appeared that the dark timber thinned out higher above us, enough for the sun to have worked its melting magic. If we could just connect patchworks of bare ground higher up maybe we could make it. I mention that there's no guarantee, but if everyone was up for a steep climb we could give it a go. Kelli stared up the near vertical slope, then started the climb.

Bobbie carries fluorescent flagging in her pack for just such occasions when we go off trail. I tied pieces onto trees every couple hundred yards to ensure we could find our way back to the trial.

There was a considerable amount of deep snow to cross, but it wasn't life-threateningly steep. Caleb and I broke trail, trying to tread lightly over snow drifts. Sometimes it held our weight; sometimes we'd break though (posthole). One spot I broke through spun me around, my head and torso angled downslope. I couldn't move. Caleb came over to help free me, but can't pull my leg out. Snow had packed hard around it so tight it wouldn't budge, and he ends up digging me free with bare hands.

It was more work than we bargained for, making our way through snow and deadfall on such an off-camber slope. Just when we thought we might make it, dark clouds moved in and the wind kicked up. Off trail, I can't be sure how far it is to the overlook and what obstacles lay ahead. Everyone is pretty whipped by now, and cold. We stopped to put on jackets as snow begins to fly. Time to hunker down. We used a tight group of trees to block some of the wind. It wasn't fun anymore. The mood is to turn back. So close.

I told the gang to sit tight while I scouted ahead... just incase we were "close." Low and behold, less than a hundred yards, our destination awaited. I holler back, "Hey, we made it." 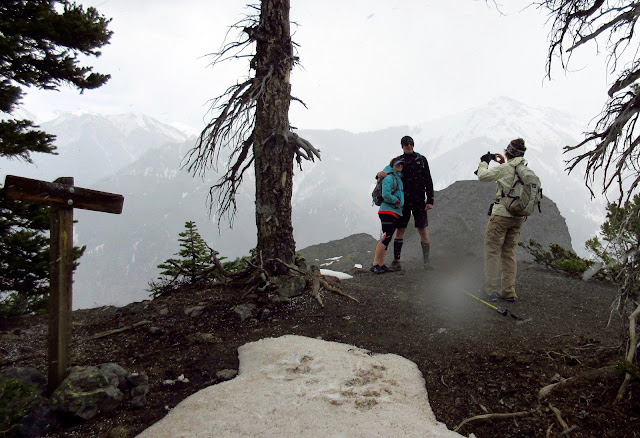 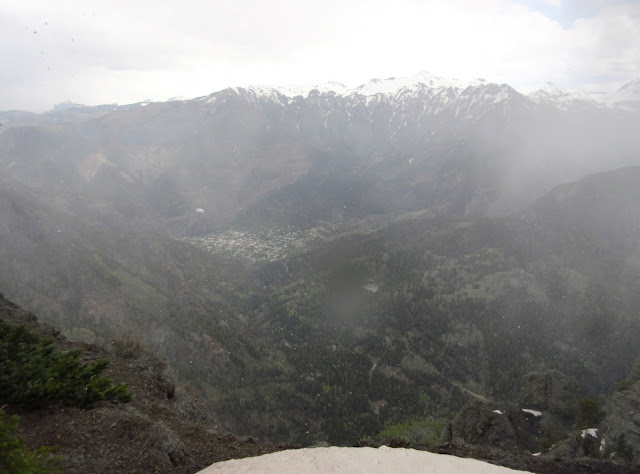 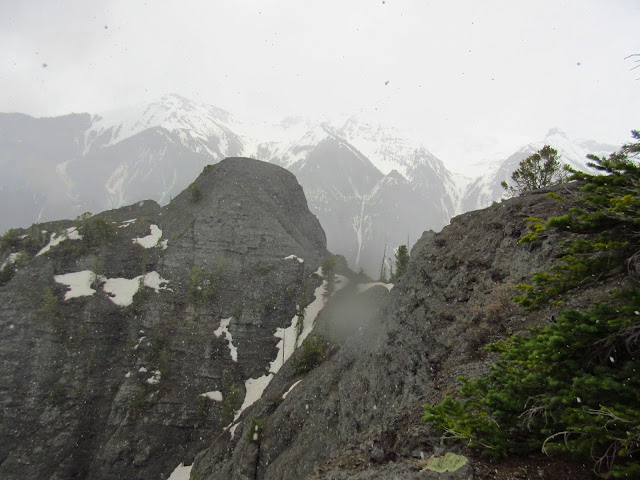 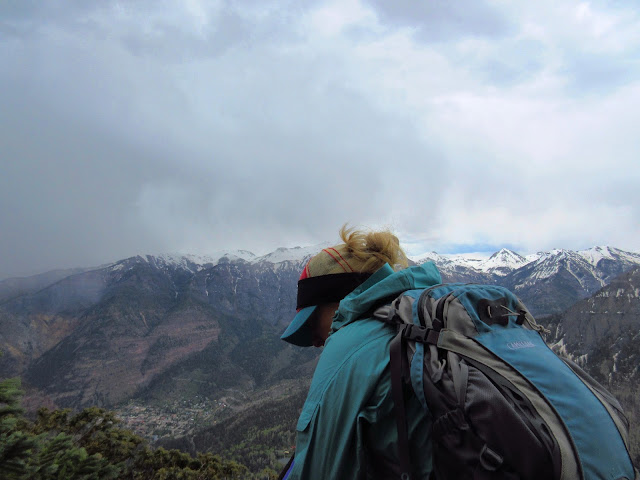 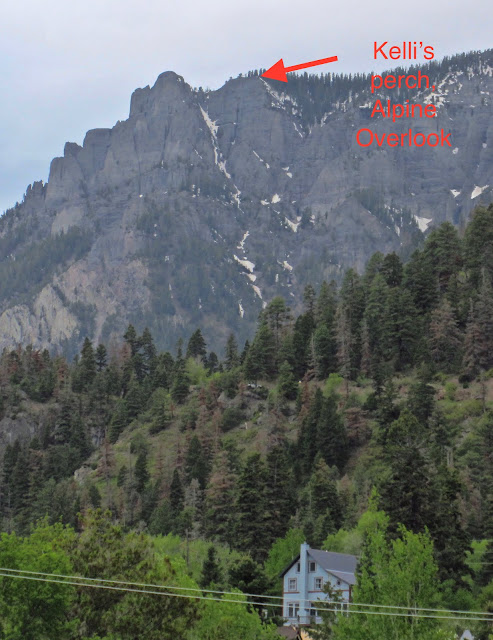 The above shot from town shows the Overlook and the verticality of Kelli's perch. 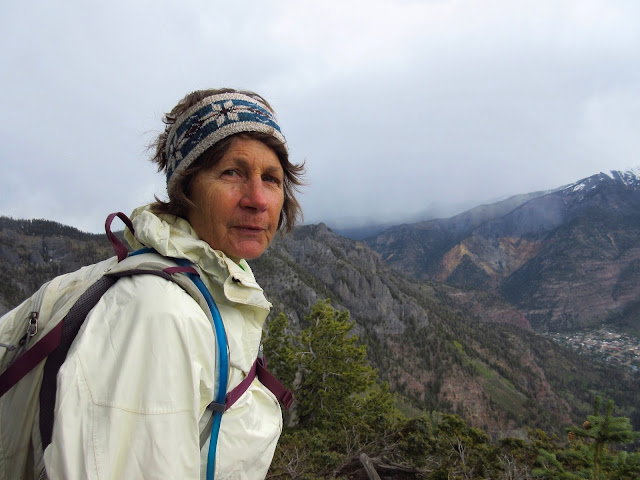 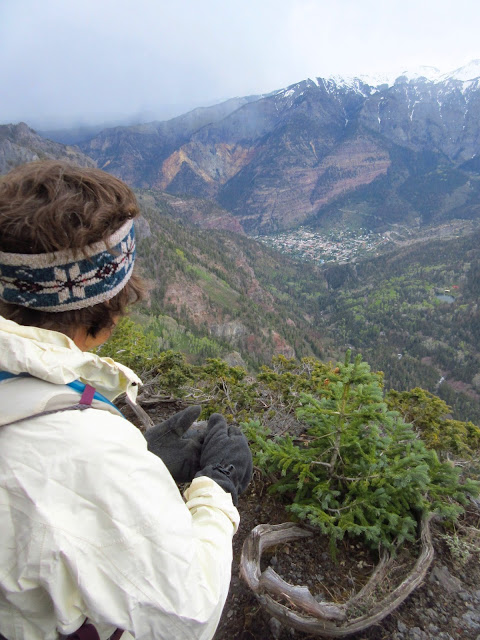 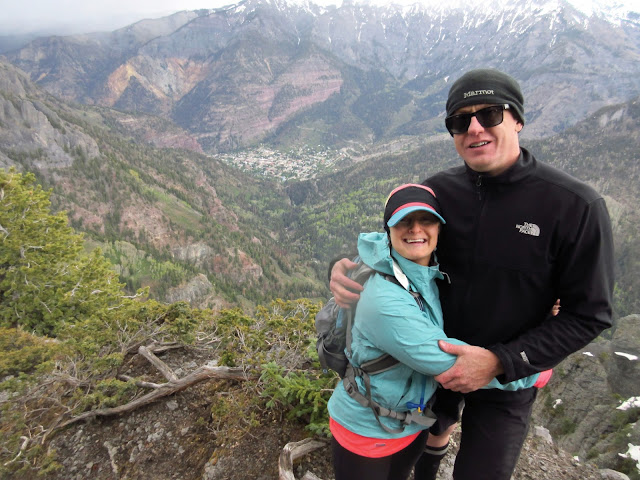 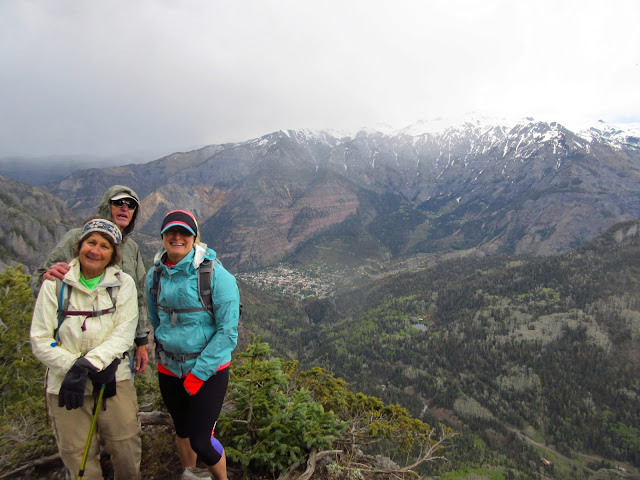 Posted by Box Canyon Blog.com at 7:51 AM