That's him in the middle, the big guy, sporting jazzy white bucks, bell-bottom slacks, and waves of jet-black hair that drove girls crazy back in the day.

Mom considered this ruggedly handsome, six-foot-three man a "catch." What gal wouldn't? Everett Milo Johnson certainly turned heads, roaring up on a classic Indian motorcycle. Whether decked out in his motorcycle jacket and boots or a suit and tie, Dad looked like he just walked off a Hollywood movie set. 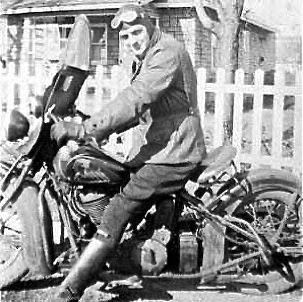 Dad was "pedestal" material; so that's where I put him... right up there with the gods. In the twenty five years I had the pleasure to observe "The Man" of our household, I can't recall a single incident that would tarnish or discredit my perception. Dad was the kind of man that listened more than he talked. As a result, people were at ease with him... drawn to him. He "walked the talk," was the epitome of honesty and integrity, confidence and humility. I am most fortunate to have grown up in his bigger-than-life shadow, and to have been nurtured by his example.

Dad stuck with Mom through thick and thin, probably when most men would have "folded camp" and bolted like a stray dog. She could be a handful, some might even say, "high maintenance." But the vows of "for better or worse" and "I do" meant more to Dad than just hasty promises made on the eve of a honeymoon. Marriage was a commitment.

Make no mistake, Mom was a also a "catch." She was a drop-dead gorgeous woman, with night-black hair, high cheekbones, and piercing blue eyes. I have the feeling she knew it, too. Man-oh-man, Mom had a way of commanding the "stage," pushing "buttons," and just wearing people down with her "limelight." She attracted attention and "drama" like flies to an ice cream social. Fortunately, Dad was a man of patience, always standing by to pick up the pieces when Mom got in over her head. Somehow, they balanced each other out.

The following tribute comes from a Fathers Day column I wrote for the Ouray County Plaindealer... a salute to My Giant, Everett Milo Johnson.


My Giant… A son's Fathers Day Tribute to his Dad
I was but a gleam, swimming around in my daddy’s eye. Then one frigid January night in Springfield, Ohio, I got a shot at a personified life on the outside. It takes a strong swimmer to turn a gleam into a dream, not to mention, patience. No one told me about the "amniotic purgatory" of nine months of solitary confinement in an elastic bag, awaiting spastic limbs and (ahem) "gender."

On the eve of Halloween in the year of nineteen hundred  and fifty, I managed to kick a hole in the "prison wall."  Suddenly, I was being squeezed... like someone trying to get the last dollop of toothpaste from the tube. A lady screamed, then all was silent. Light grew intense as I was pushed toward the end of a "tunnel." Next thing I knew, some masked bully was holding me upside-down and smacking my butt.

It took nearly a year to learn how to sign “Feed Me” to my "Giants" (what I called my parents before learning the concept of “family”). One of my Giants was soft and cuddly and came with two milk jugs. Later I would call her "Mama."  The other was bigger, a little scratchy, rough, and scary. During the day he wrestled with automobiles—cursing and throwing wrenches at them. Later, I would call him “Daddy.”

There are legendary stories regarding "flying wrenches" and "expletive laced fits of temper" in Mom and Dad's auto repair shop. Then one Sunday they both “found the Lord,” and it cost Dad nearly half his vocabulary. People said it was a miracle, how Dad’s “salvation” led him to try and put aside smoking, drinking, and cursing. He and Mom became regulars at church, and there ensued a classic metamorphic battle... the Holy Trinity versus angry-male DNA, Heaven against Heredity.

Dad and Mom started out as budding Ohio entrepreneurs, living on the cheap in a small two-bedroom apartment overtop their Garage, Coal, and Cushman Scooter businesses. I had to share a brother, Dan, and sister, Sally Jo, with my Giants as they preceded my Immaculate Conception and Birth by nearly a decade. The "I. C." is another story altogether. Suffice it to say that Mom wanted another child and dad didn’t. Just know that there was “trickery” involved, and I am living proof that the steel of male resolve melts like butter when lights go down in Oh-high-oh.


I’m confident that if the Lord hadn’t stepped in to tame Dad’s temper and foul language, Fatherhood eventually would have. He knew better, but “male metamorphosis” is damn near an oxymoron without intervention from a Higher Power. “Boys will be boys,” after all, and in Dad's youth it was said that he was bent a little to the wild side. There are stories, like the one where he'd stand on the saddle of his Indian motorcycle as it sped down the street... all to the cheer of young spellbound girls. Ah, it takes a real man to bid bravado and “glory days” farewell in order to take on less glamorous roles of husband, father, and provider.

When Dad found "Salvation," it forever changed his life. In retrospect I almost feel sorry for him—that in his newfound Pentecostal piety a “relief valve” was lost. Those who ply the blue-collar "trades" understand the mental and physical frustrations that arise within the coarse of a typical workday—when "wheels" come off best-laid plans and nothing short of a good old expletive can circum-Vent an impending stroke. “Darn” just doesn’t get it when wrenches slip from bolt-heads and knuckles get crushed against steel. In such situations men who suppress the urge to swear live highly respected, but much shorter lives. Being a mechanic was a tough "fit" after salvation.  Maybe that's why he suddenly sold the garage business, a nice home in the country, and moved the family west to Arizona to start over... from scratch.

I remember growing up as Dad’s “helper.” Amid cars breaking down, leaking roofs, plugged sewers, and the myriad of day to day dirty job frustrations, I came to realize and appreciate the enormous self-control it took for him to maintain "composure." The only time I remember hearing him swear "post-salvation" was when he cursed God for taking his only daughter, Sally Jo, at the tender young age of 23.

Everett Milo Johnson was the oldest of nine children, most of which grew up impoverished on the various farms his parents leased or sharecropped in southern Ohio. He joined the Civilian Conservation Corps in order go west and see the country Zane Grey wrote about in his novels. Everett ended up being stationed in Oregon, where he built roads and trails and fell head-over-heels in love with the west. He died of a heart attack at age 61, a few months shy of retirement.


The caustic irony to this tribute is that Dad ended up with a “wrench” in his hands most of his life. Maybe if he would have cursed more… 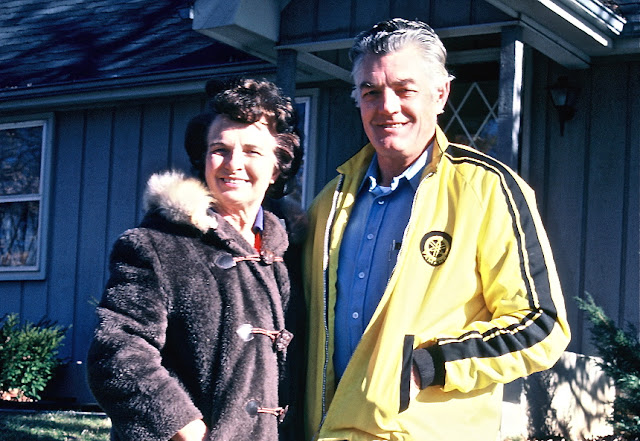