Half Moon plus Half hearted equals Full Day in the Mountains 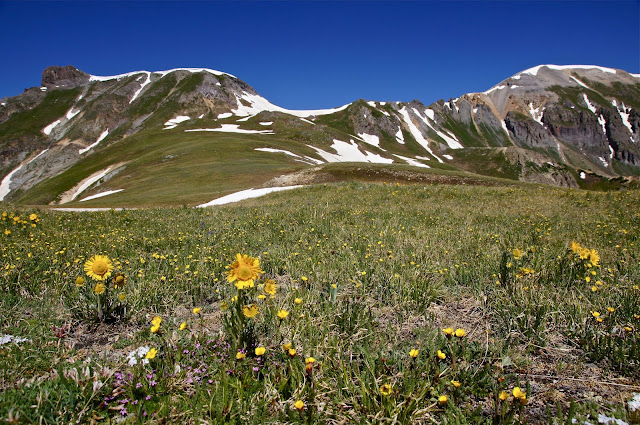 Bobbie suggested some south-facing hikes, the idea being snow would be "manageable." She was coming off a 3 day work week, raring to go, while I was coming off a 2 hour tango with Camp Bird Road, in need of a masseuse... preferably young and strong and female.

I've had a Man Massage a couple times and it didn't go well. He was out of shape, probably tipped the scale at 250, and about halfway into my massage he began to fart. Then, as if that wasn't bad enough, he worked up a lathering sweat that dripped all over my body. As we all know, women don't fart or sweat. 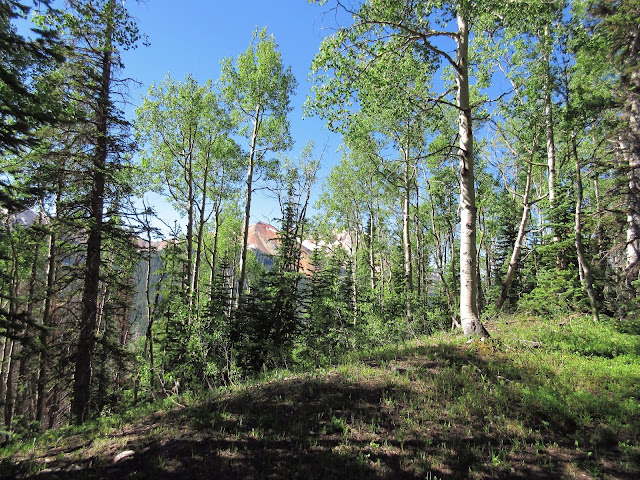 But it was a nice day to get high. Lovely Ouray was forecasted to push an unlovely 83 degrees, so it would be cooler "up there" at 13,500 feet, give or take, on top of Hayden Mountain's highest peak. 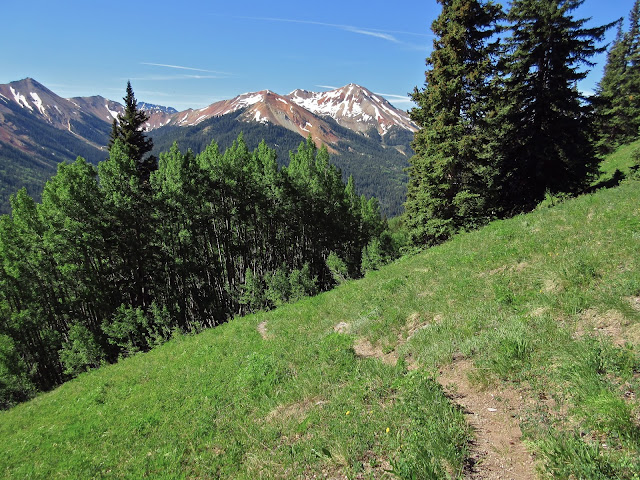 The route to Hayden was, you guessed it, Hayden Trail. It would land us on Richmond pass, a saddle from which we could scramble to the summit after negotiating an in-spire-ing ridge run over some, well, spires.  So, with nearly 4,000 feet of elevation to gain, we best get started. 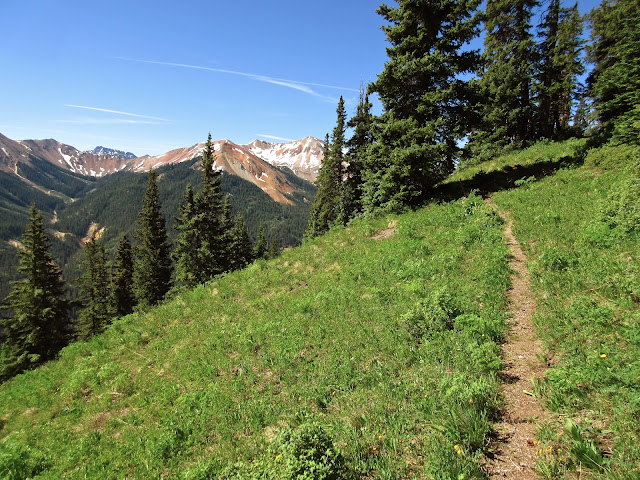 It seems none of my photos convey the steepness of the "Bitch" Hayden Trail, probably because I'm not really in the mood to take purdy pictures when I can't breath. Suffice it to say my legs pouted the whole way up, wondering why I was being so mean to them lately. 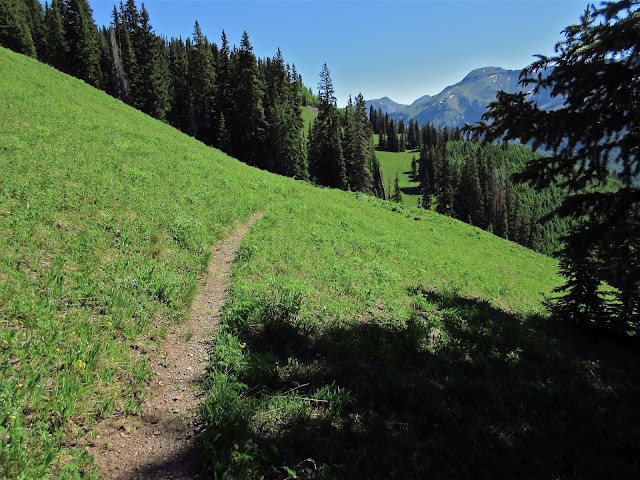 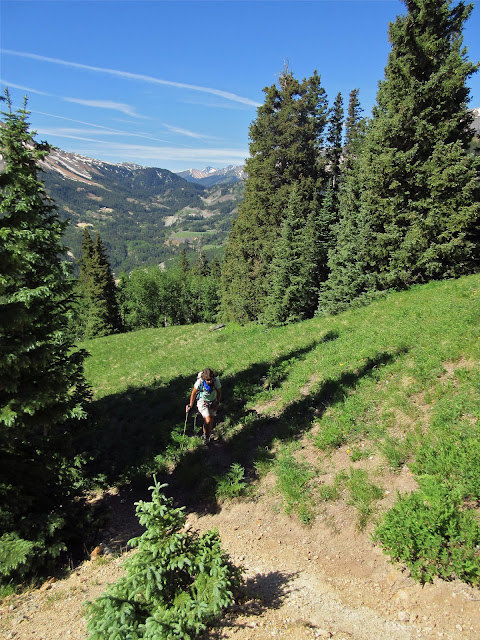 Then we popped out above timberline. Ok... some patchy snow, but maybe we can find away around. 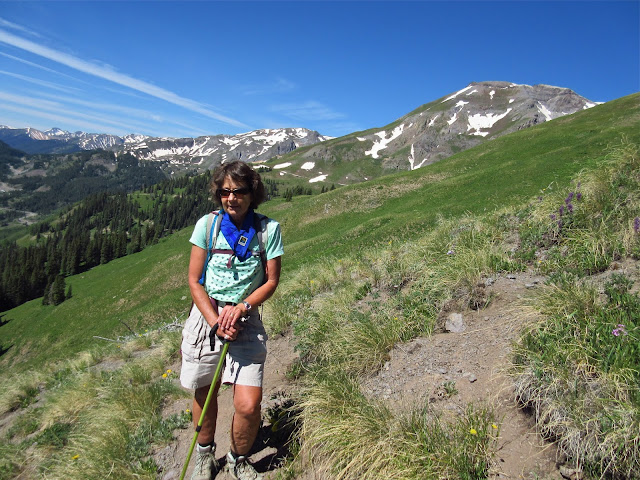 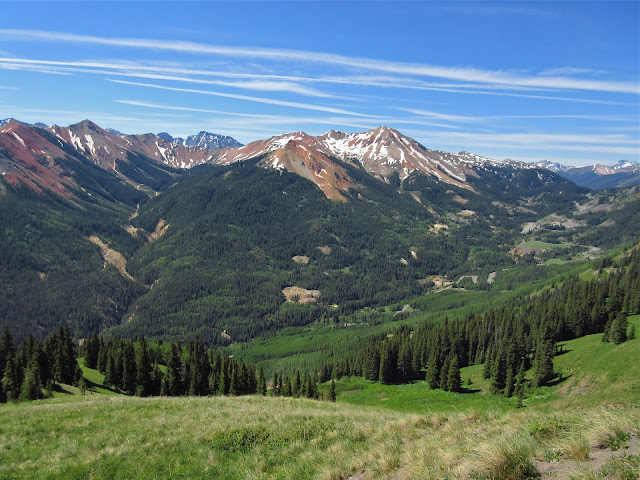 We paused to catch our breath and look around. Hard to believe we started from the bottom just an hour and a half ago. My legs reminded me that going down hurt them (which is to say, "me") more than going up. Yes, it is the "downs" that shows your age/arthritis. But we'll deal with that when the time comes. 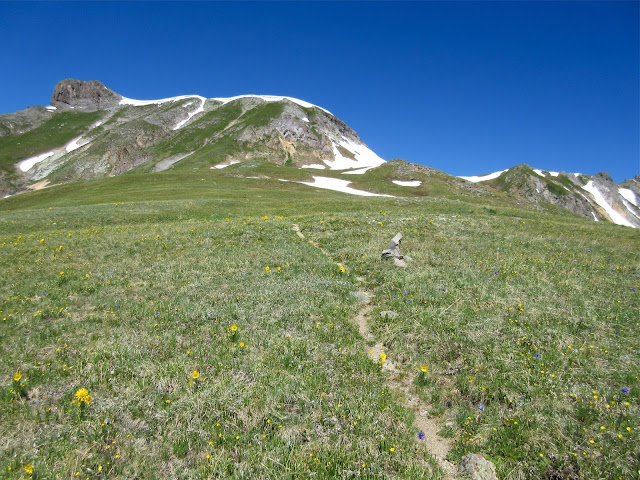 The above photo shows the saddle of Richmond Pass to the right of center, partially hidden from view by a grassy knoll. Hayden is off to the far right, a better view below... 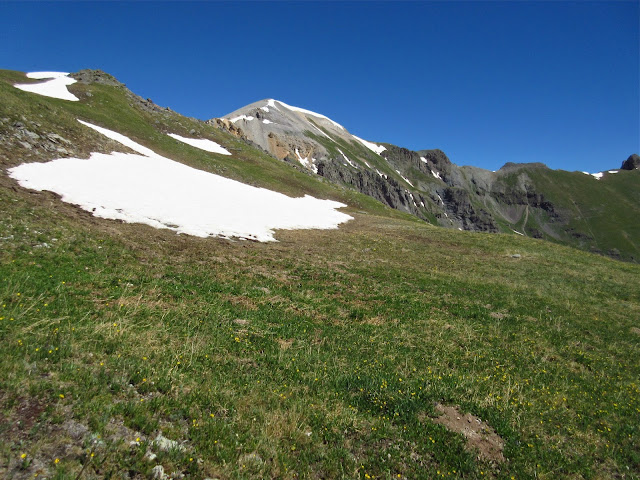 I looked left just in time to catch the half-moon before sank below a cornice.

Then a final push to the grassy knoll.  Shucks. Not only was the saddle snowed in, but so was the approach. It was steep, too. Bobbie wanted no part of post-holing, not to mention loosing her footing and careening human bobsled style into glacial boulders. We were sooo close, though. My legs cried out to listen to Bobbie, for Christ's sake, "You've still got to get down!"

I walked out on the snow. "It feels firm."
"No!" In unison from legs and Bobbie.

So we plopped our sagging butts down and had our peanut butter and jam sandwiches... squinting into the snow, even with sunglasses on. The wind kicked up and it got a tad chilly. 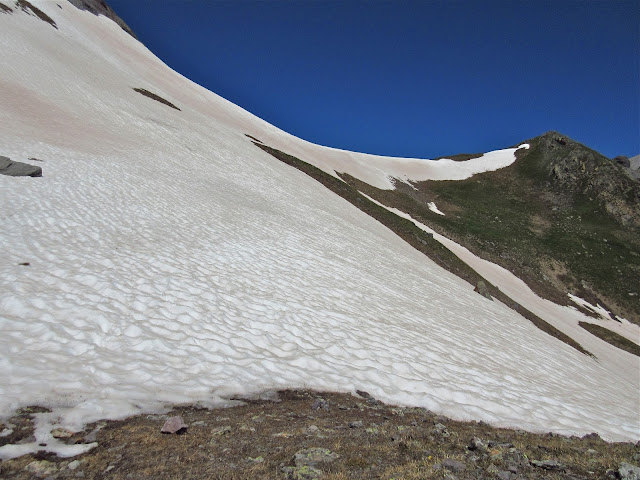 Looking back across the way was the whole chorus of Red Mountains, not looking nearly as red shooting into the sun, but marvelous just the same. 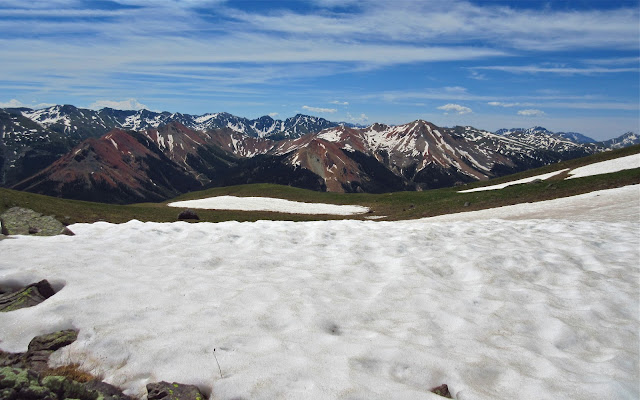 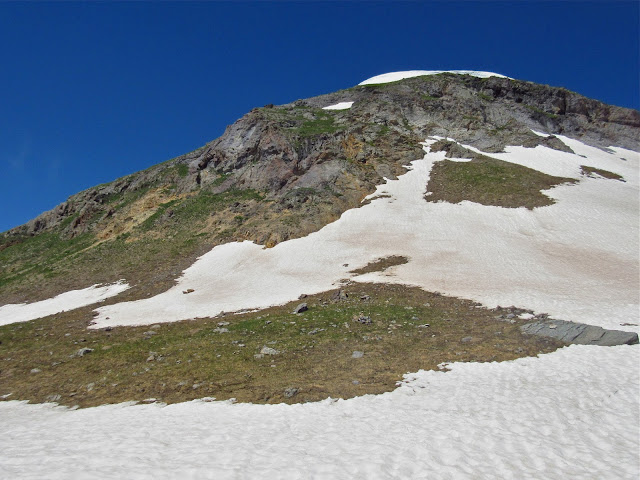 Time to tighten bootlaces and start the Toe-Jam back down to the car.  Cue "Sound of Music." 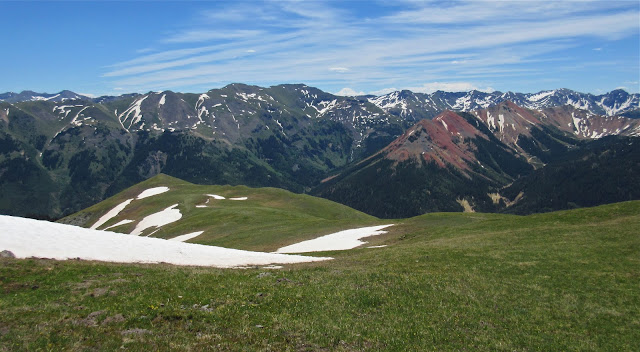 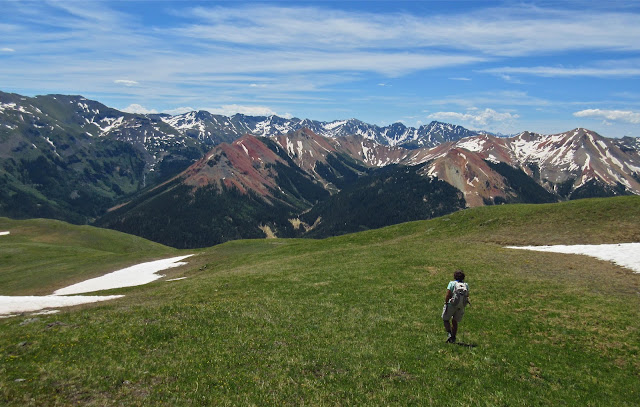 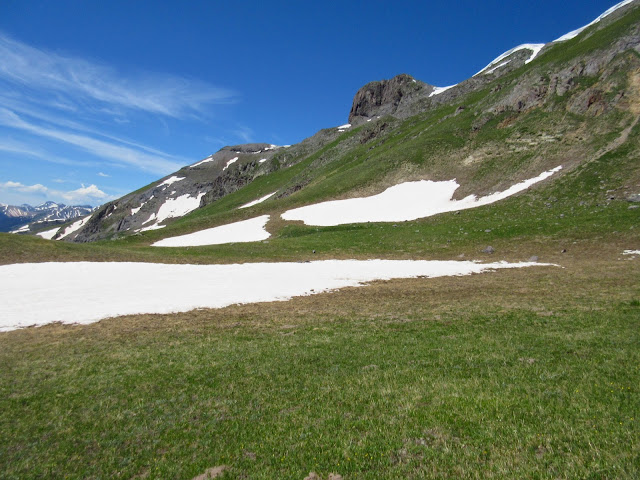 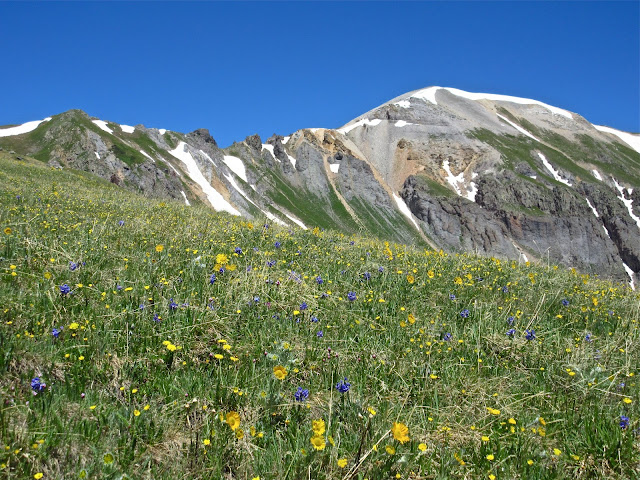 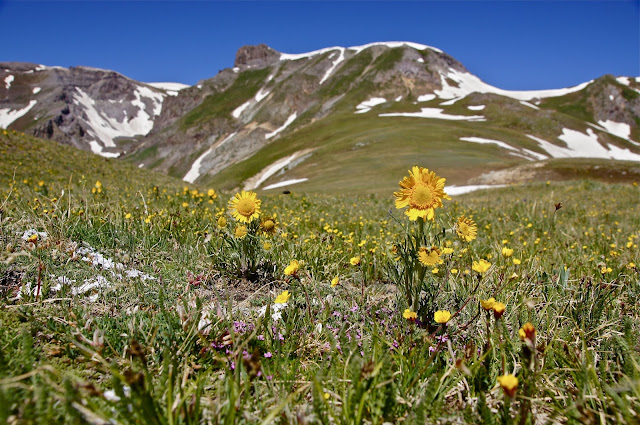 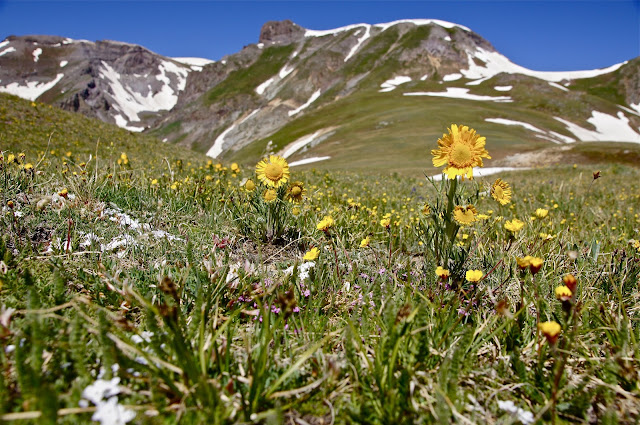 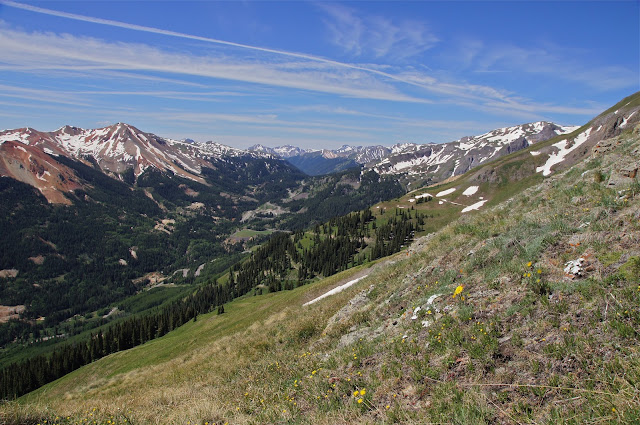 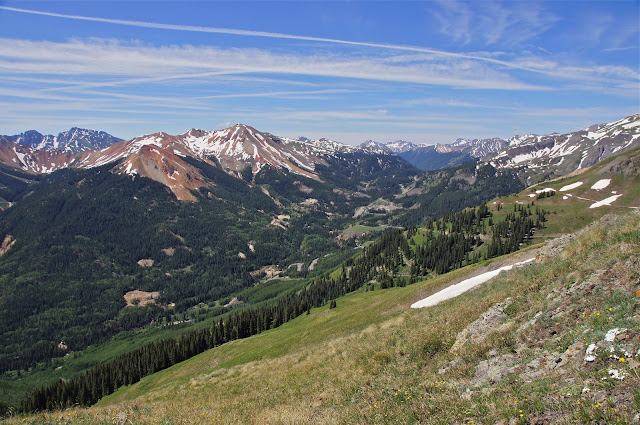 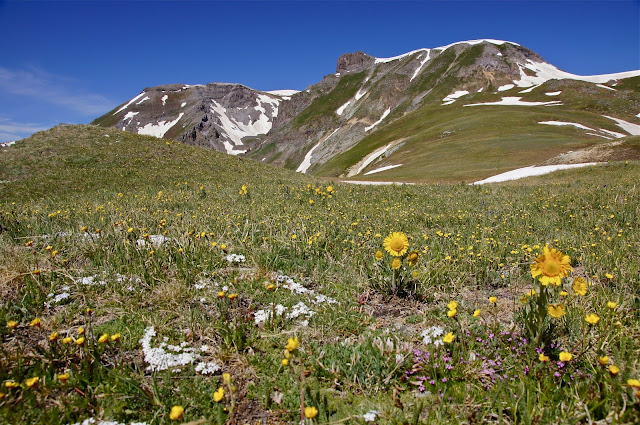