"Many Pools" and Beyond, and Murder By Death In An Airbrushed National Postcard 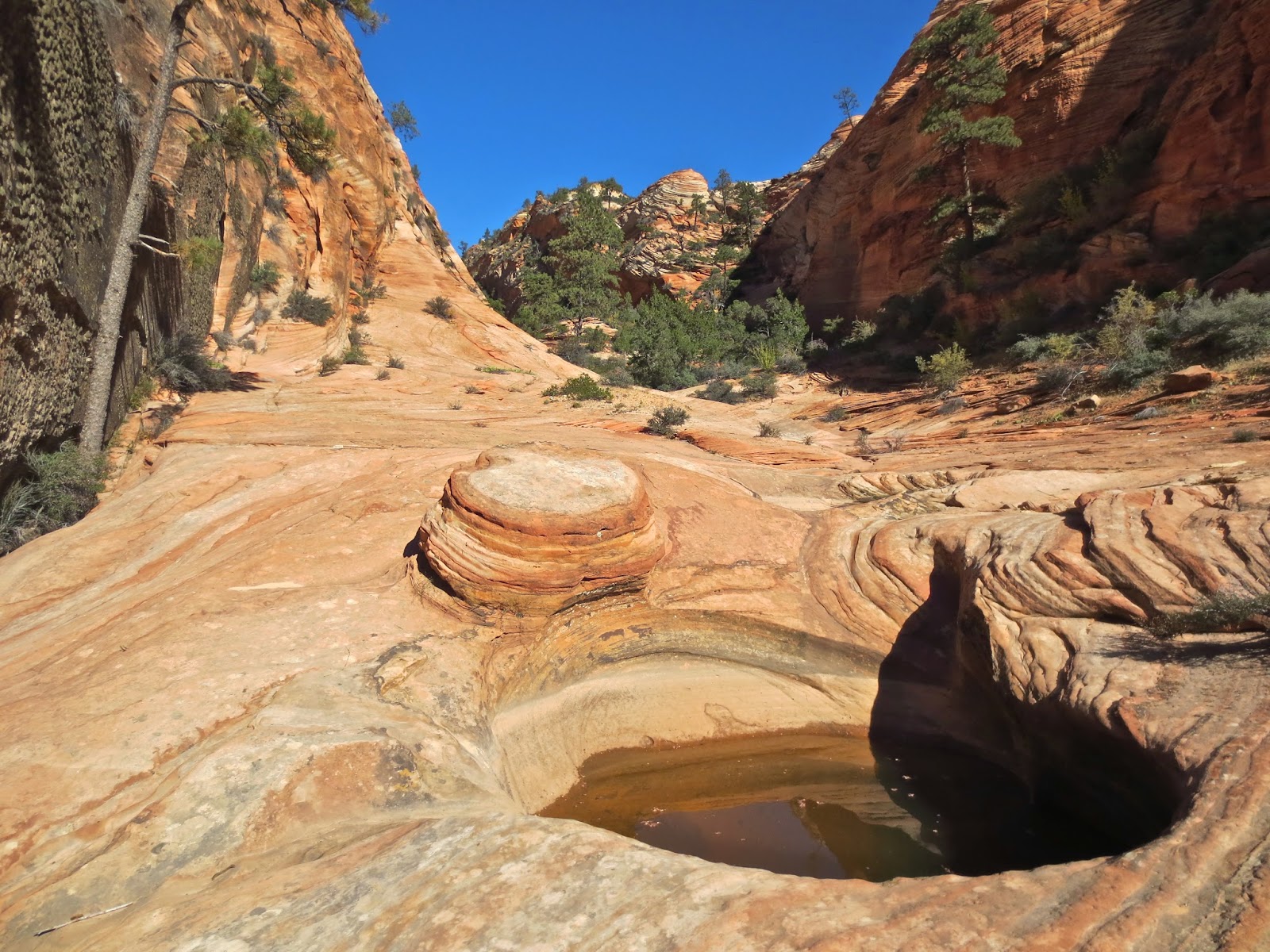 On the heels of a solo mountain bike ascent up The Flying Monkey, on a day when the mercury topped out over 80, I was ready for a casual day, maybe take a little stroll up one of Zion's nameless canyons and photograph some blushing maples. I'm seeing a lot of red lately—rocks, canyons, leaves. Nothing like Nature in a little red dress to get one excited. Off we go, rubber legs and all.

Entering Zion, from either direction, is like driving onto a National Geographic documentary set...or, or, into a life-sized 3D postcard—like models in Playboy, it's just too pretty to be real. "Who's airbrushing all these rocks and canyons, anyway?"

We stop by the Visitor's Center to water up our hydro-packs and talk to Mr Ranger Sir. I want to ask him if he knows who's behind the missing Picnic Baskets (grin). But he's a real Ranger—has enough weaponry and gadgets on his belt to take down an army of un-permitted Geezers (another story). His belt is girded with a pistol, and it's way too big for the holster. There's assorted ammo clips, a taser gun, a baton...a flashlight that could double as a billy club...handcuffs, nylon zip ties, and a small roll of duct tape, I assume to shut someone's mouth. He wears a bullet proof vest, a square jaw, and an attitude. Given the Ranger's armament and attitude, I wisely check the Yogi jokes at the door. When outgunned to hell and back by a temperamental officer, it's best to realize not everyone is on vacation.

Bobbie asks Mr Ranger Sir if the "Many Pools" area is "nice." He nearly bites through his lip trying to suppress what he wants to say. I'm sure he gets asked such questions a lot. His face goes all red and splotchy, the bite mark on his lip glows red. He says, "Yes, it's 'nice.' It's all 'nice,' it's a National Park." As we scurry away a fellow Geezer lady asks Mr Ranger Sir where she can take a "nice" hike. I wait for the sound of a semi automatic pistol emptying its clip...but hear nothing. Huh, must have used the taser. 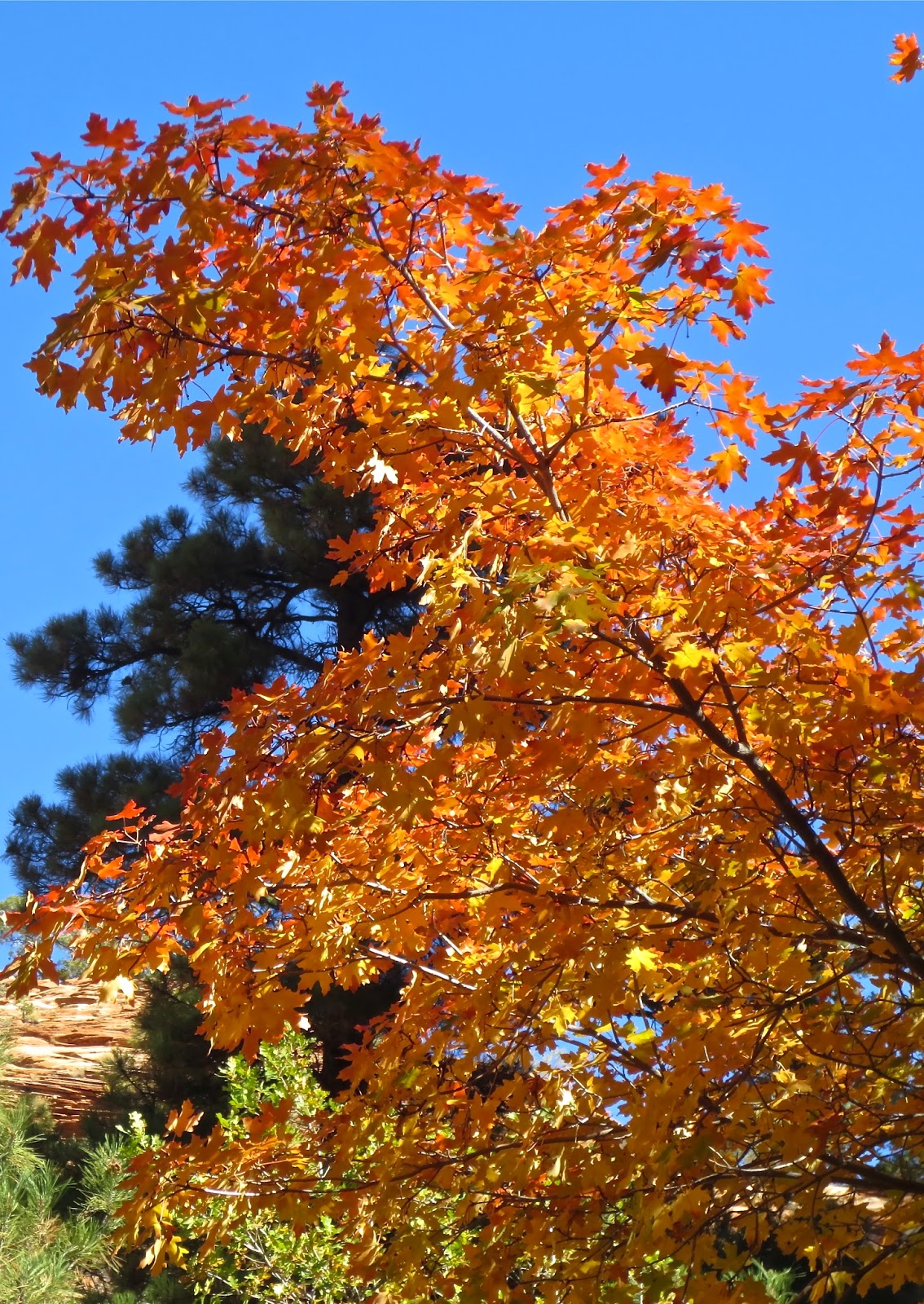 It's strange how little "extra" information you get from Rangers behind the desk at Visitor's Centers, I suspect because half of them have never actually hiked into the areas they get inquiries about. The info babes and dudes should be required to explore a Park's trails so they can gain a little firsthand knowledge. Hell, pay them to do it; one day a week you get paid to go hike a new trail. 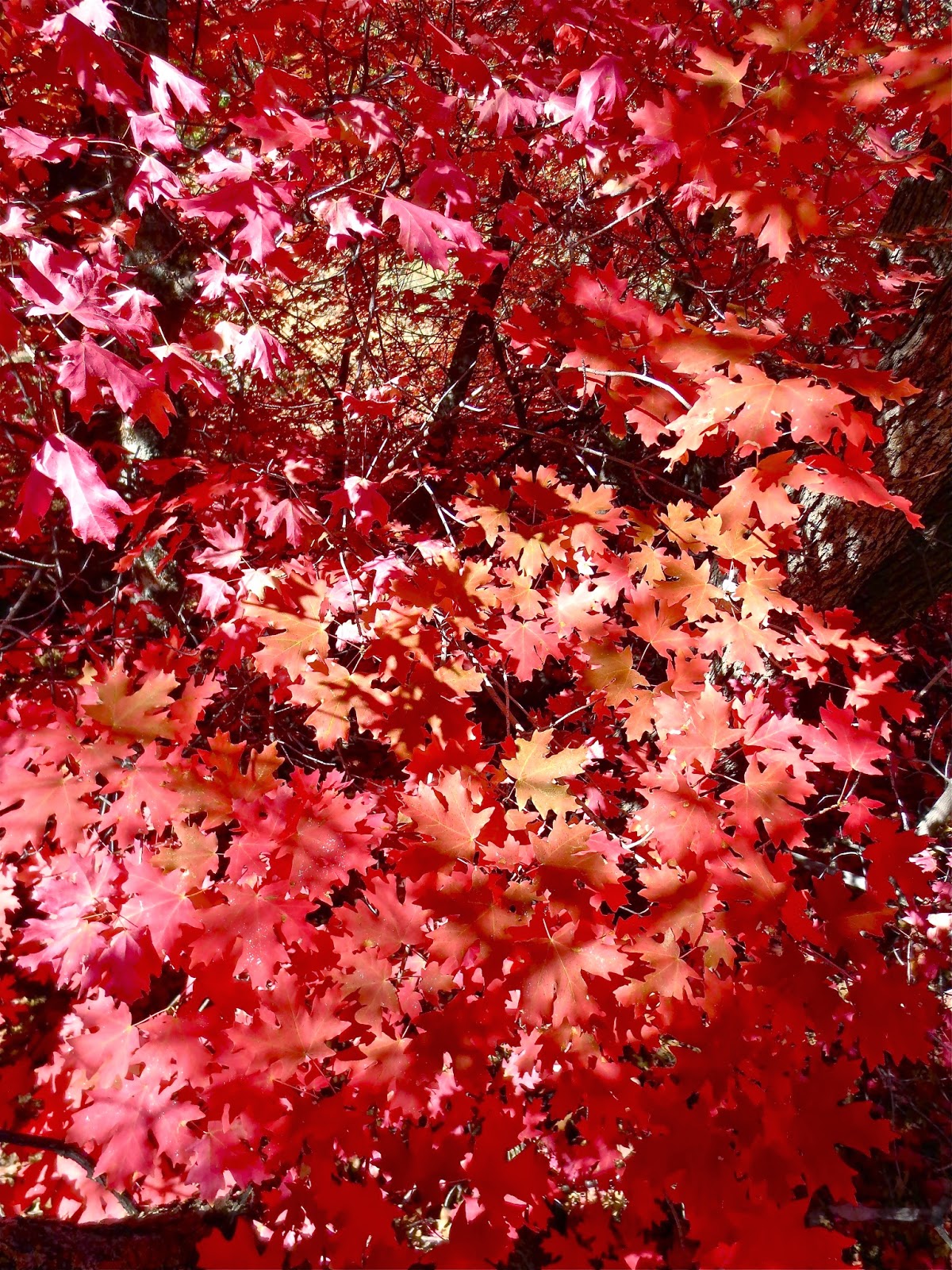 Later, as I clung to life with finger and toe holds too small for my super sized digits, on a boulder some 30 feet above a rock-strewn dry wash, I wonder if the info babes and dudes are "throttled" by the NPS "brass" so people don't get themselves into situations just like this...trying to get to some spelled out super-scenic wonder that ends with a rescue? It is, after all, darned easy to find oneself in a pickle; can't go up any more…can't get back down (thank you for that branch, Bobbie. I owe you one). 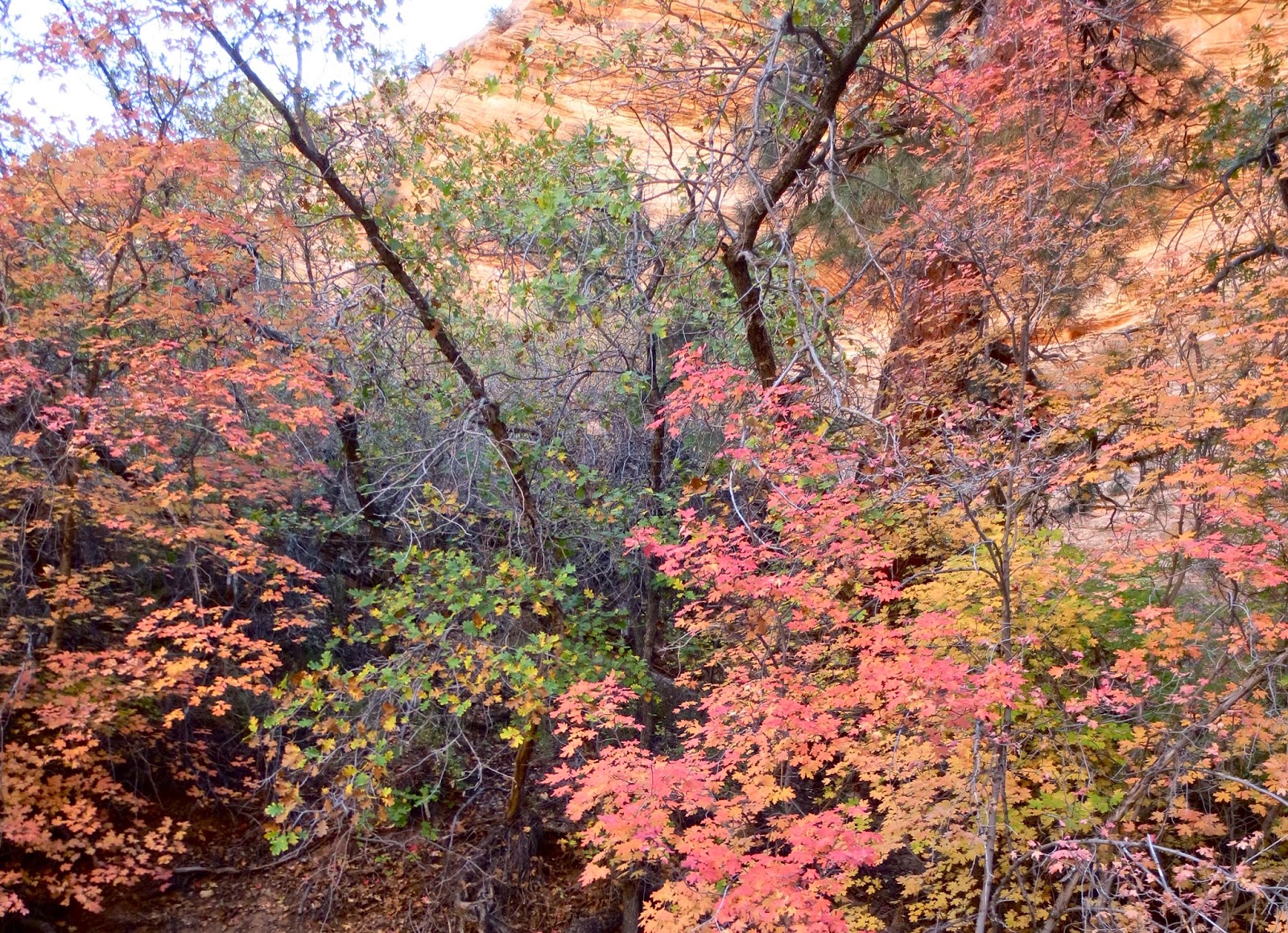 We meander along without plan or purpose, taking photos of burning bushes, picking up pretty purple rocks (really, Purple!), wading through leaves—the usual distractions for non goal-oriented hiking. Just as my legs thank me for the day off, our no-name canyon slimmed into a sinuous narrow slot…with bowls and tanks and places where the sun does not shine. Suddenly, a "meander" turns into a hike, and it gets a whole lot more interesting. Uh oh. 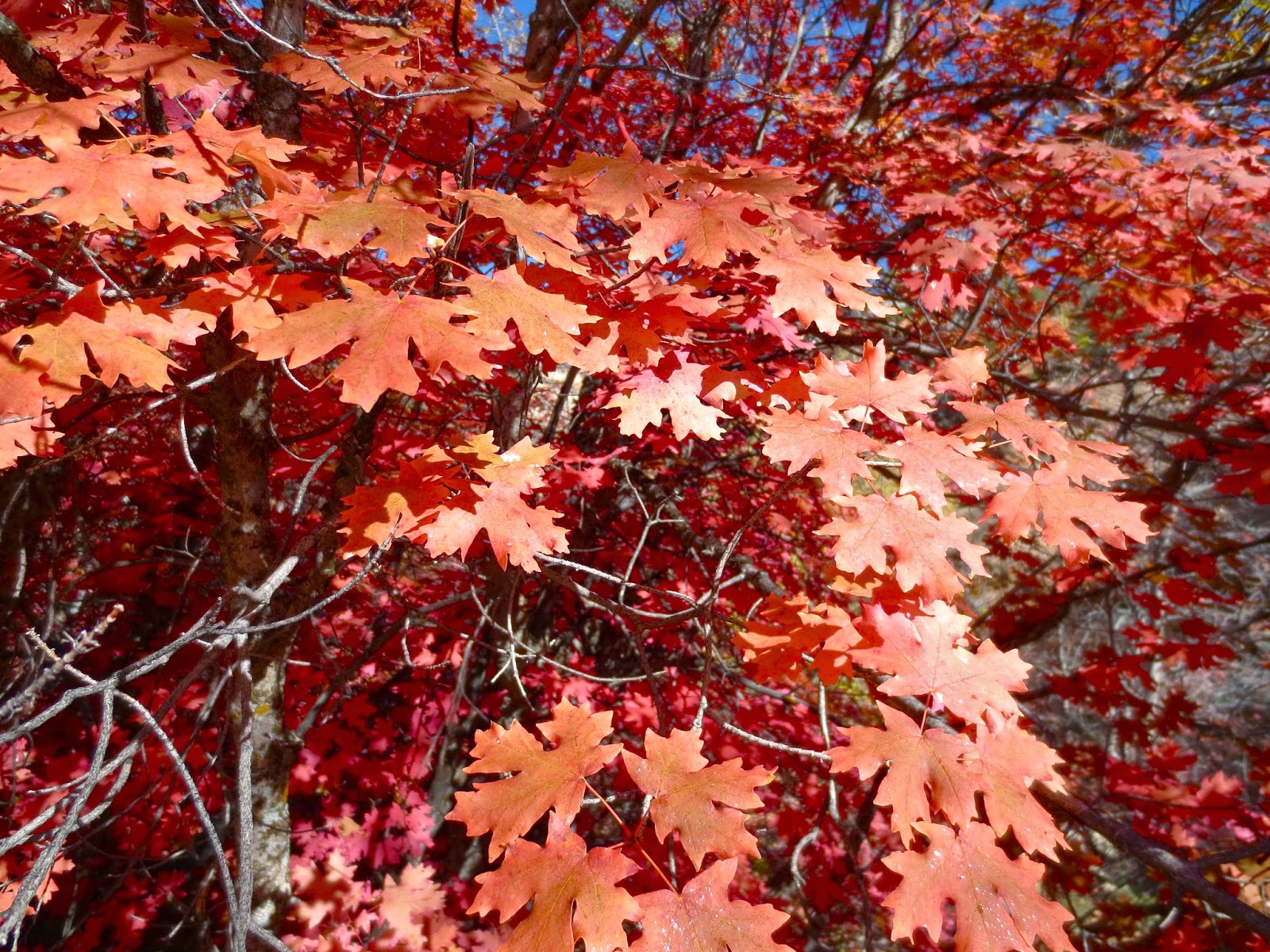 In the shade of Wall Street cliffs, a slit of blue sky overhead, our legs and energy level pick up, "Wonder where this goes and what's up there?" 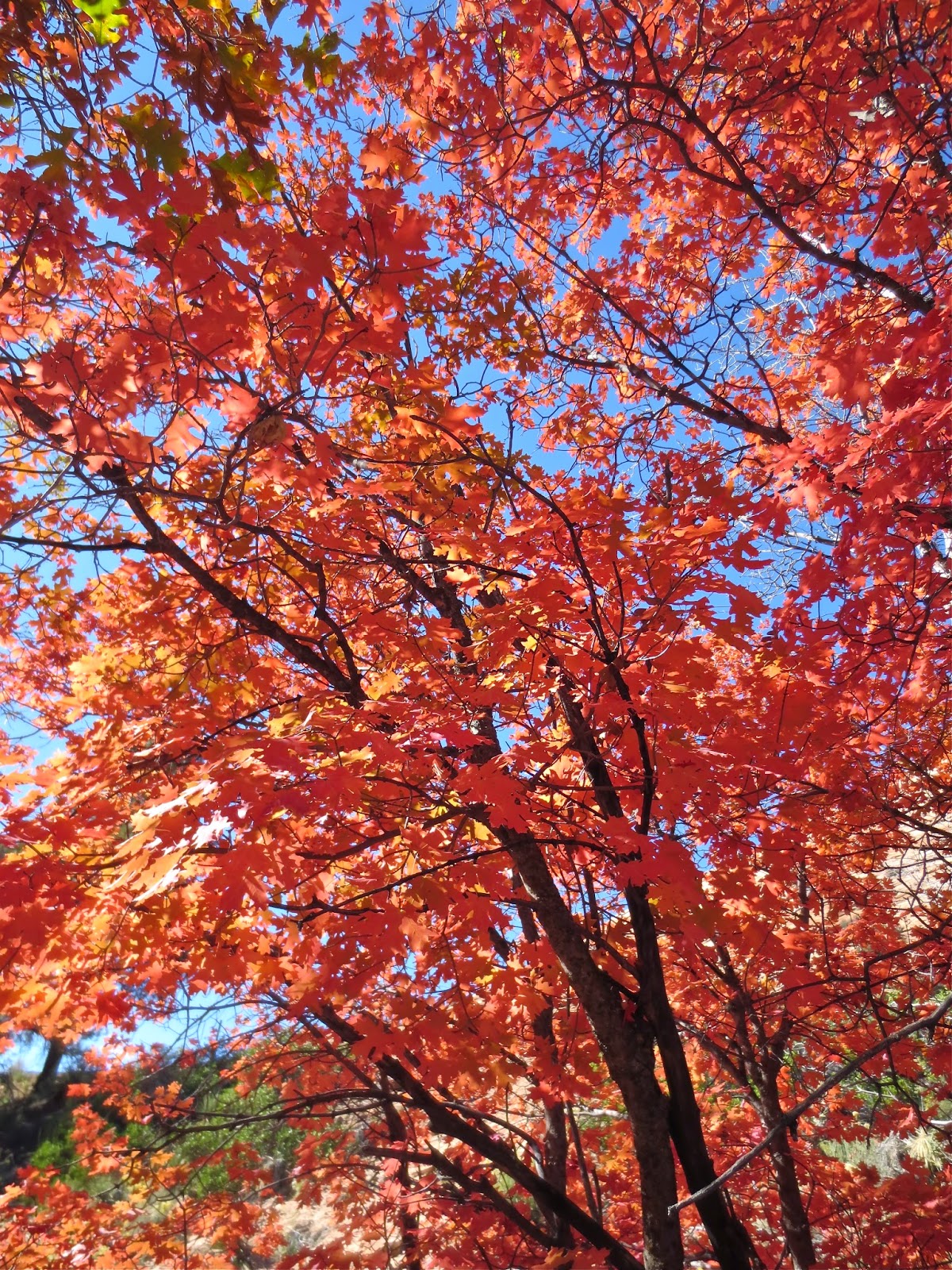 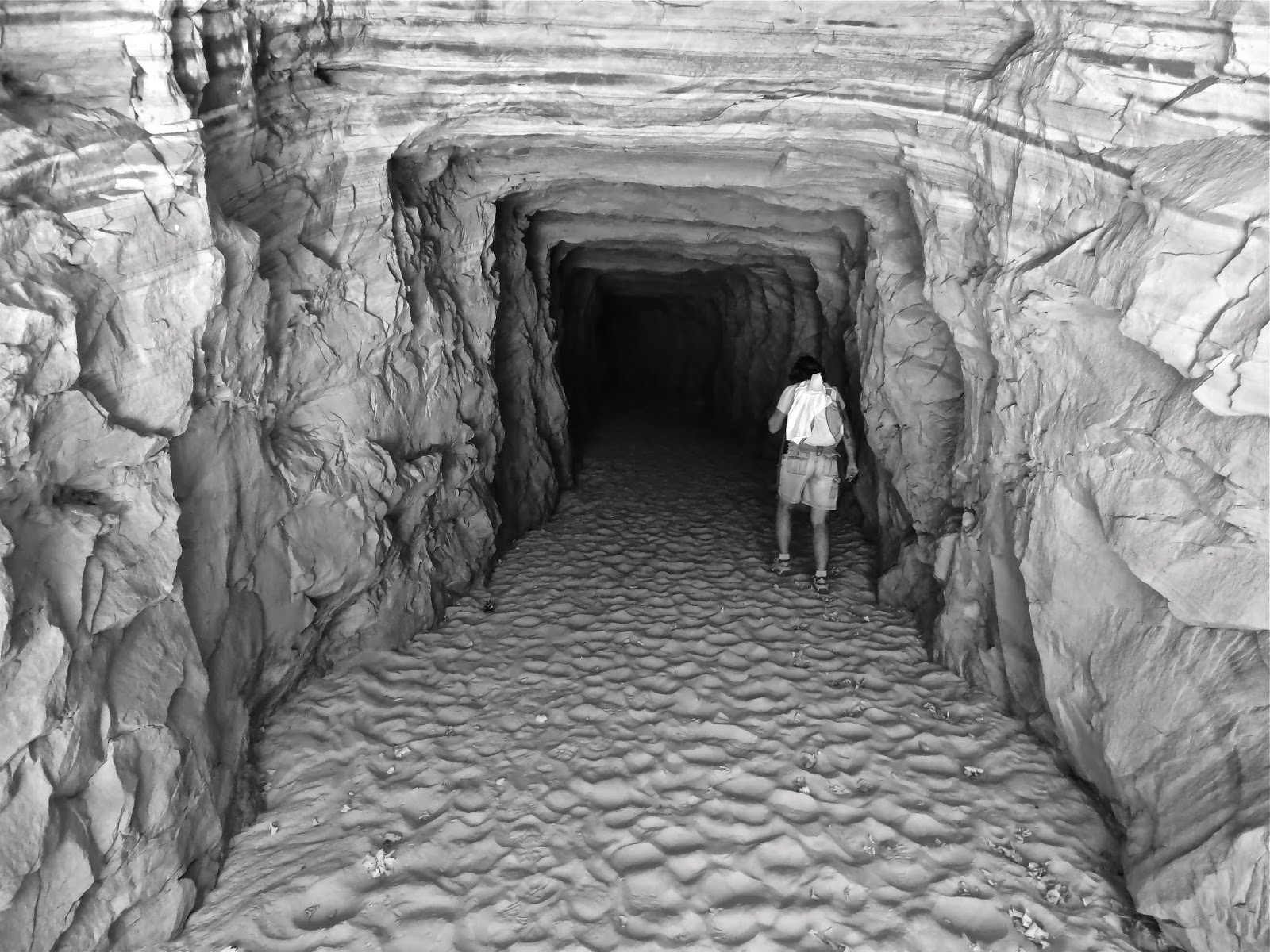 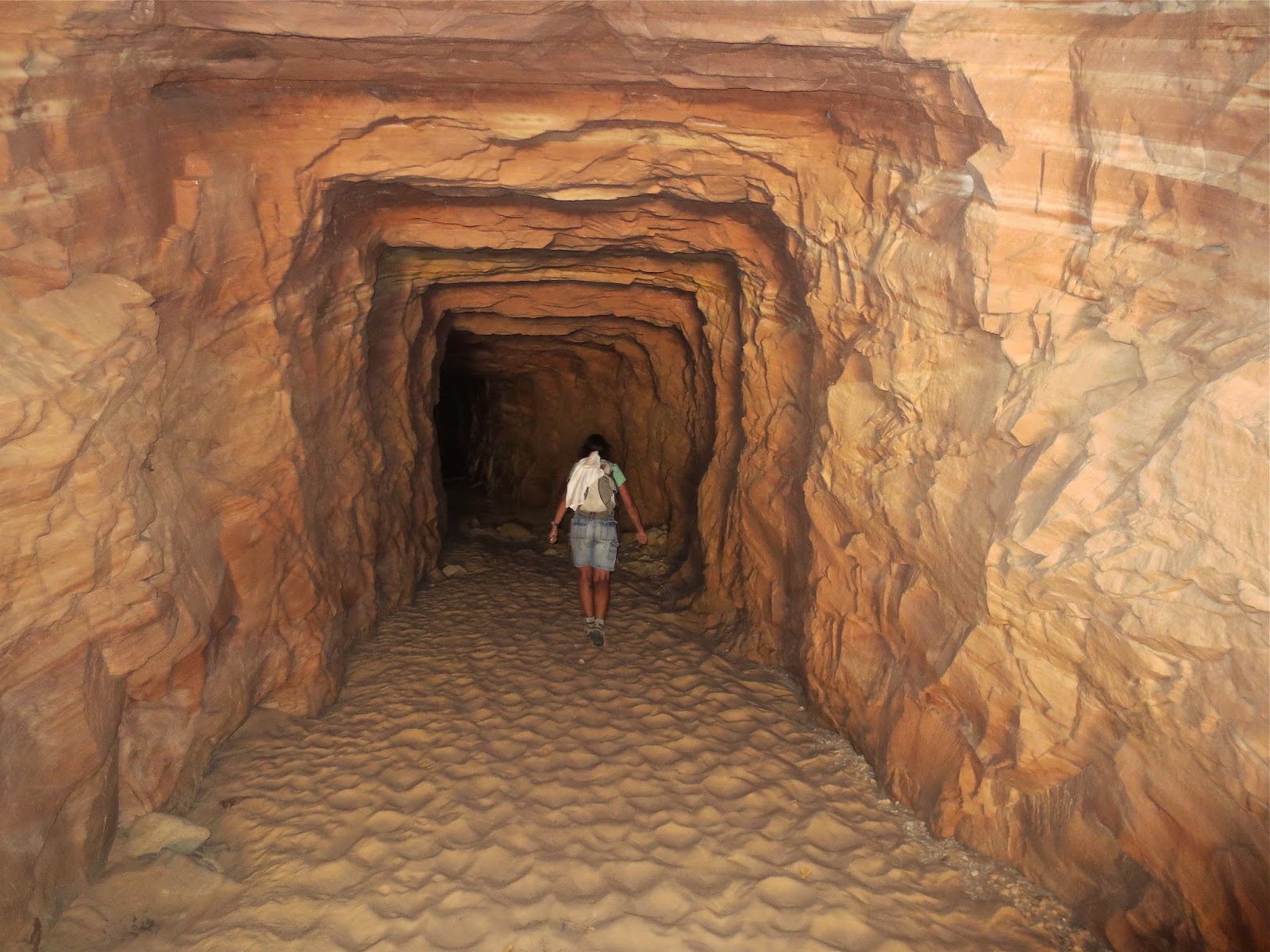 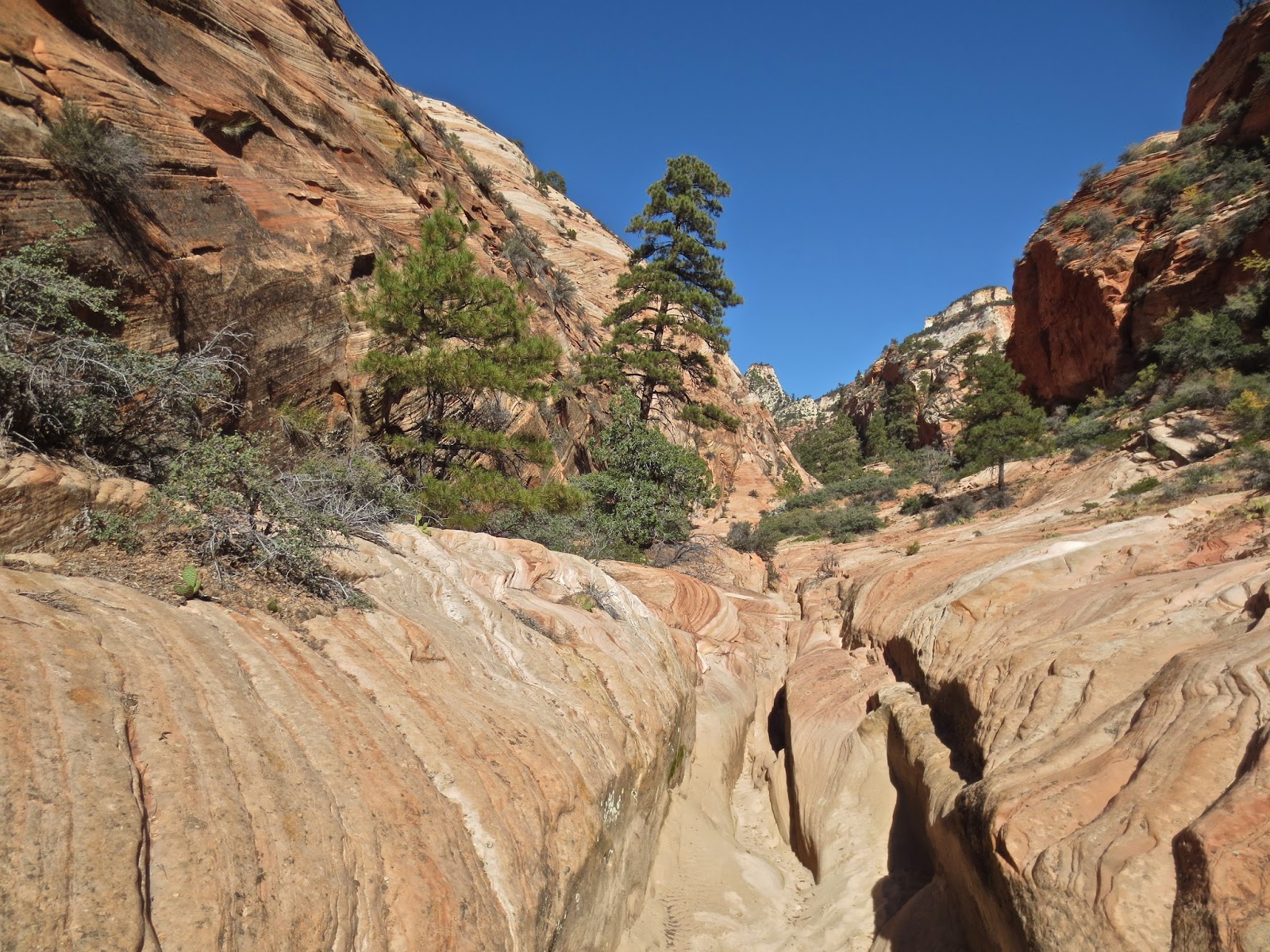 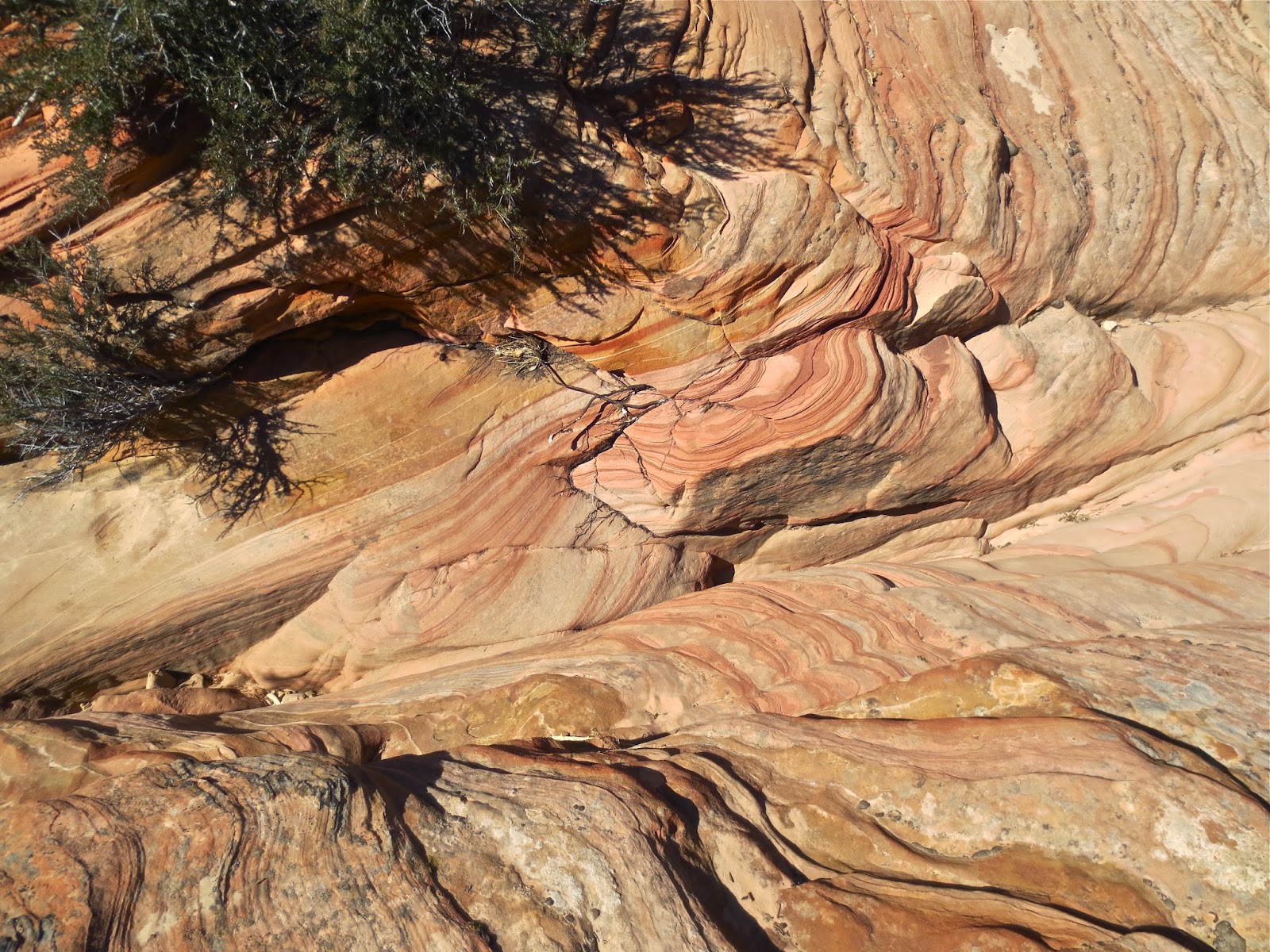 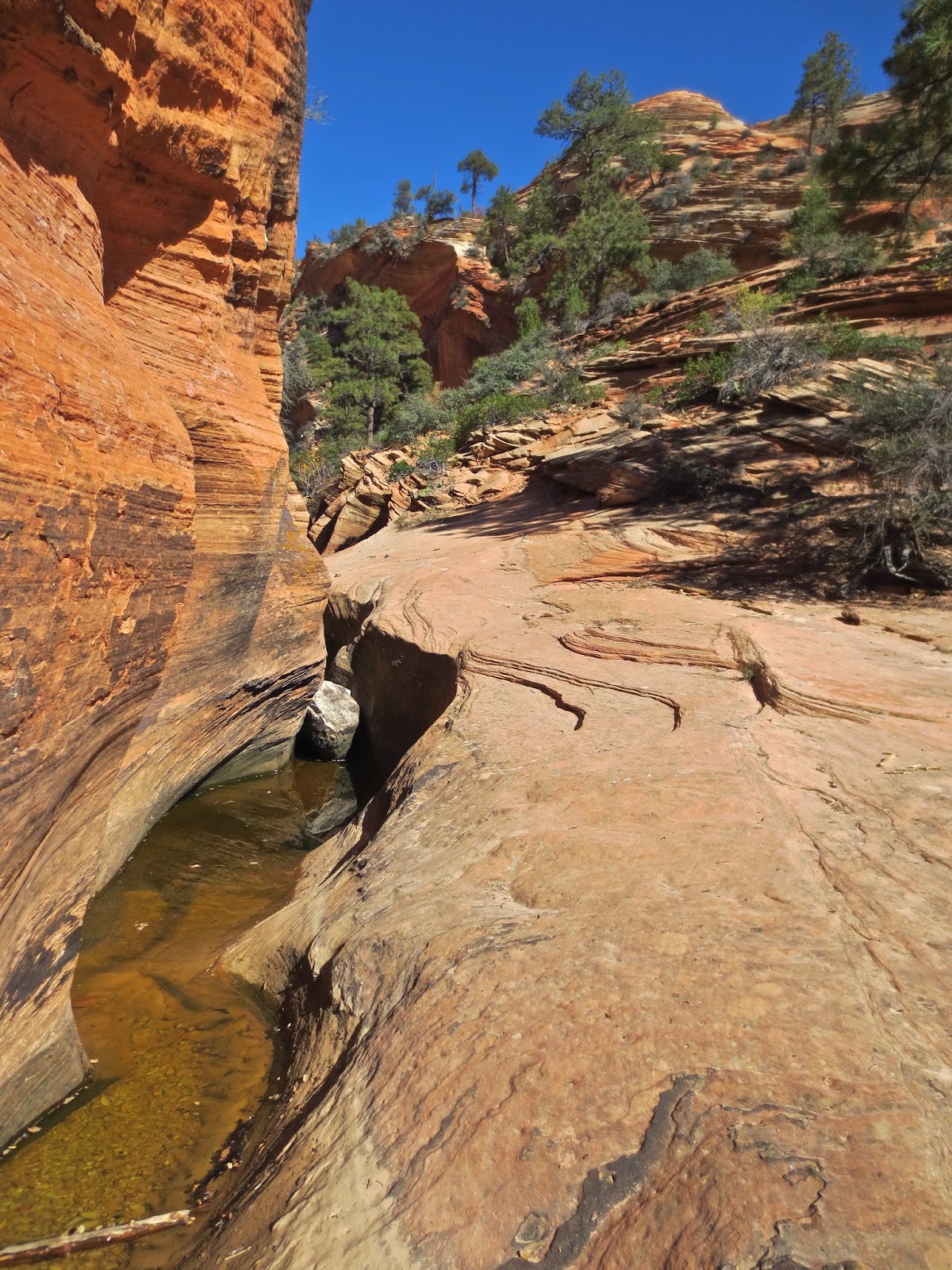 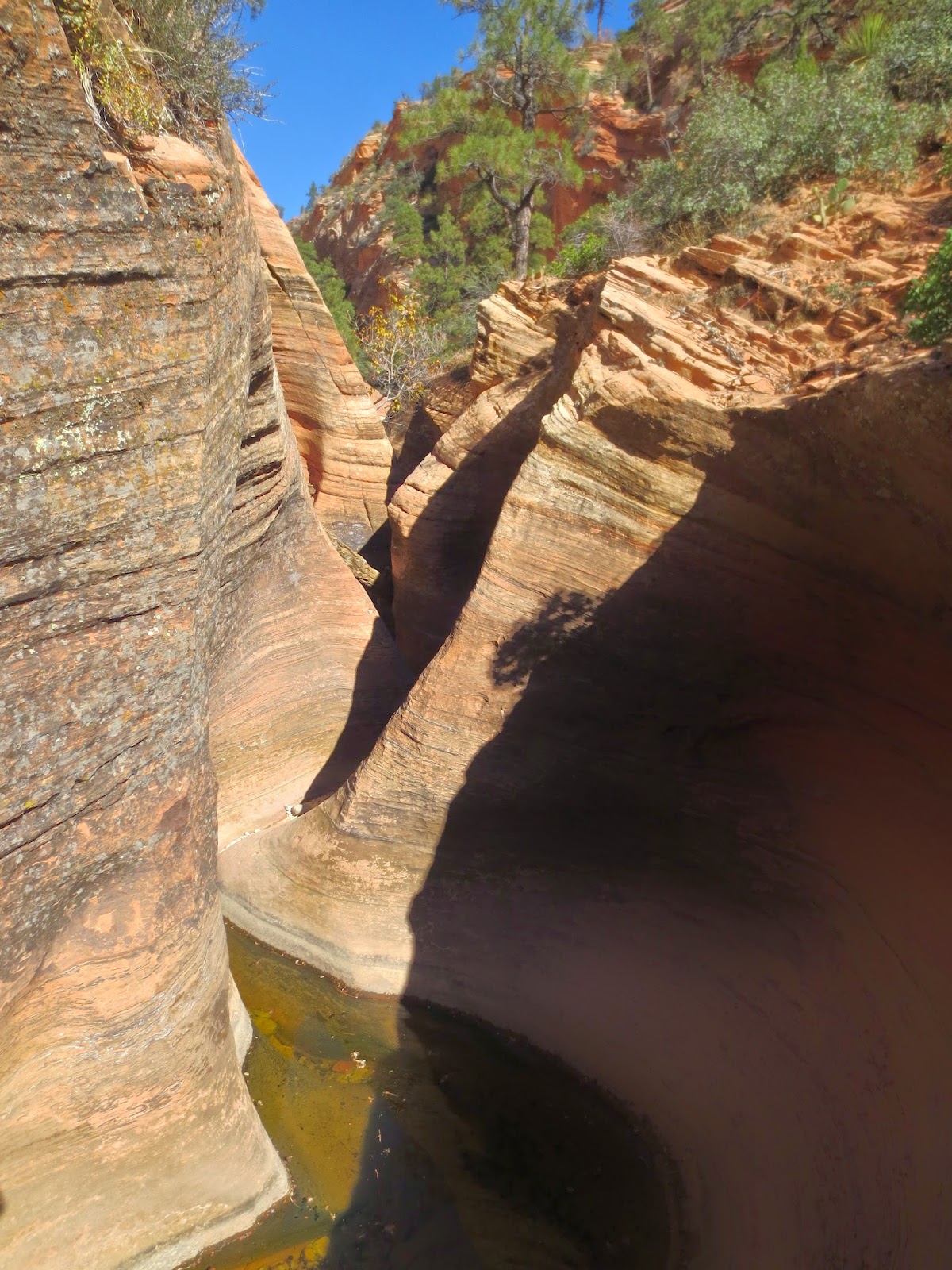 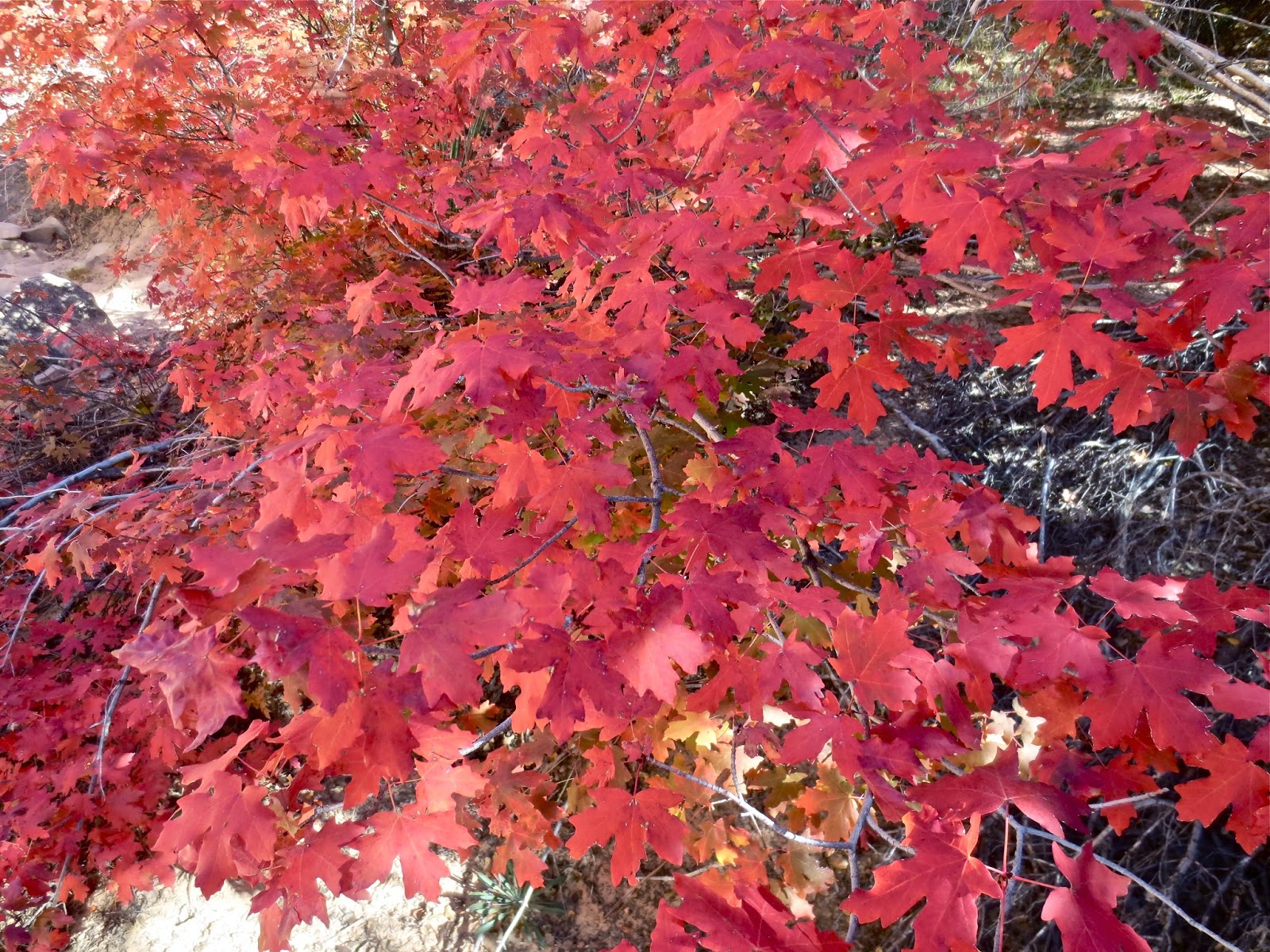 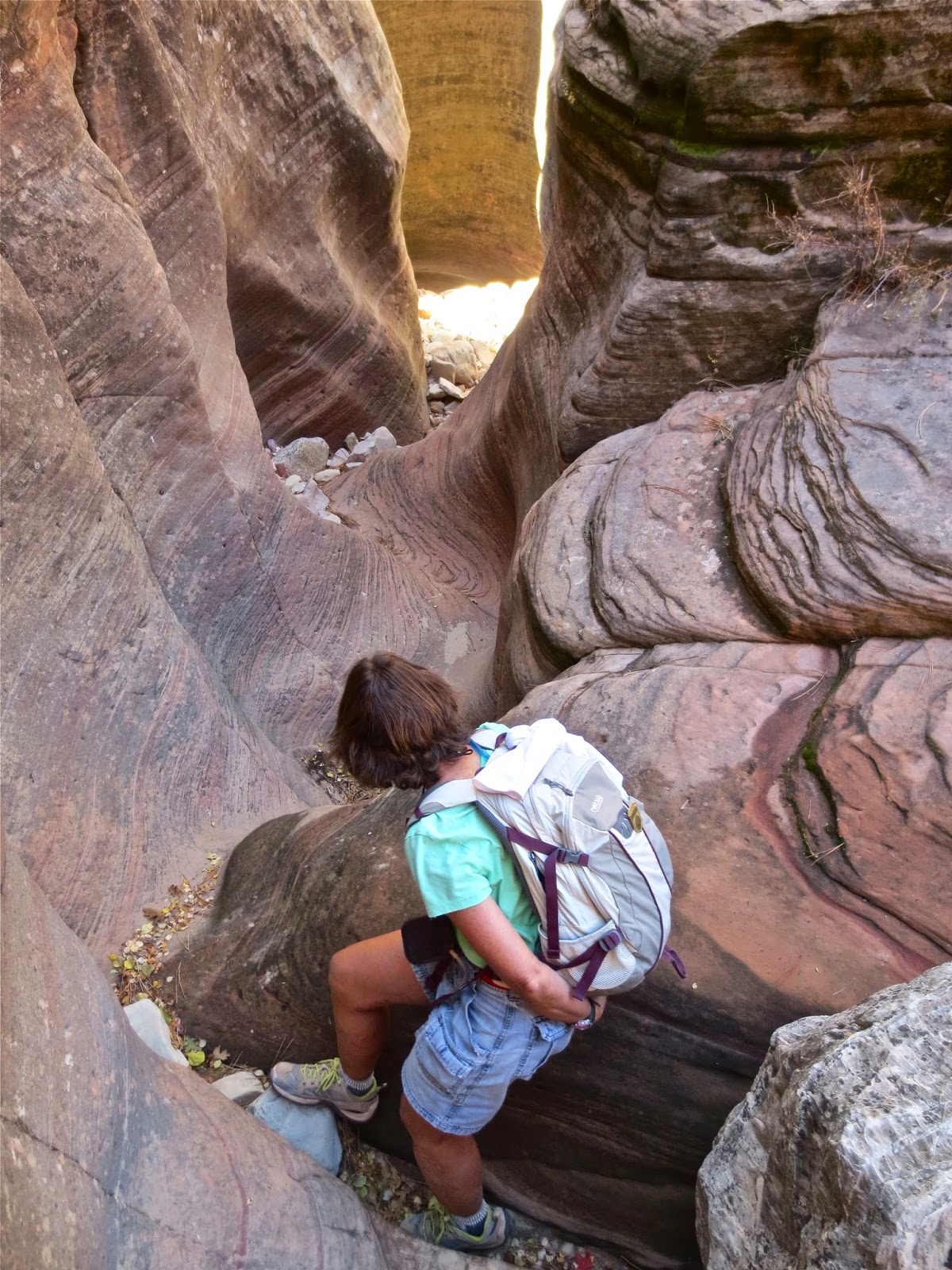 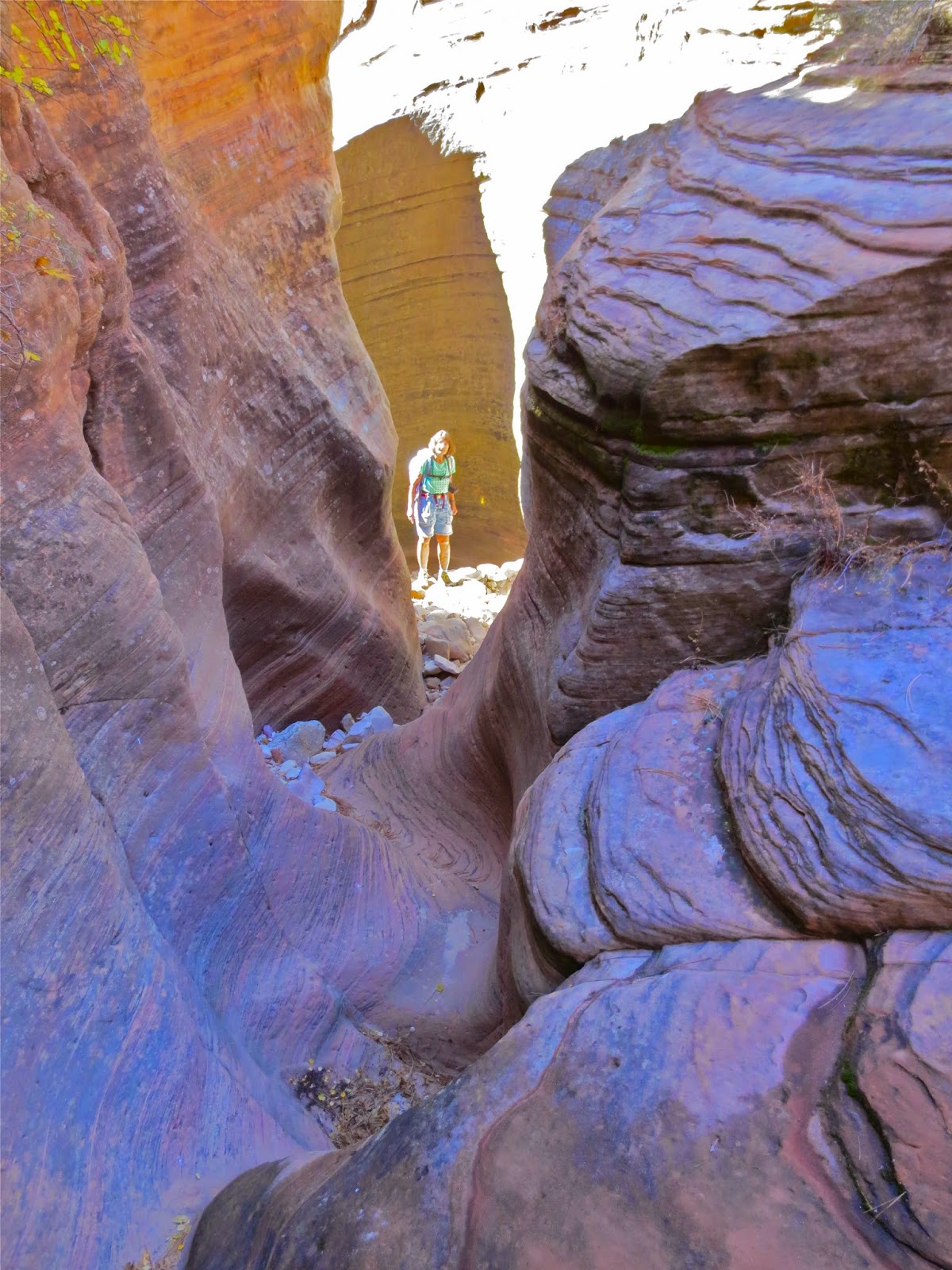 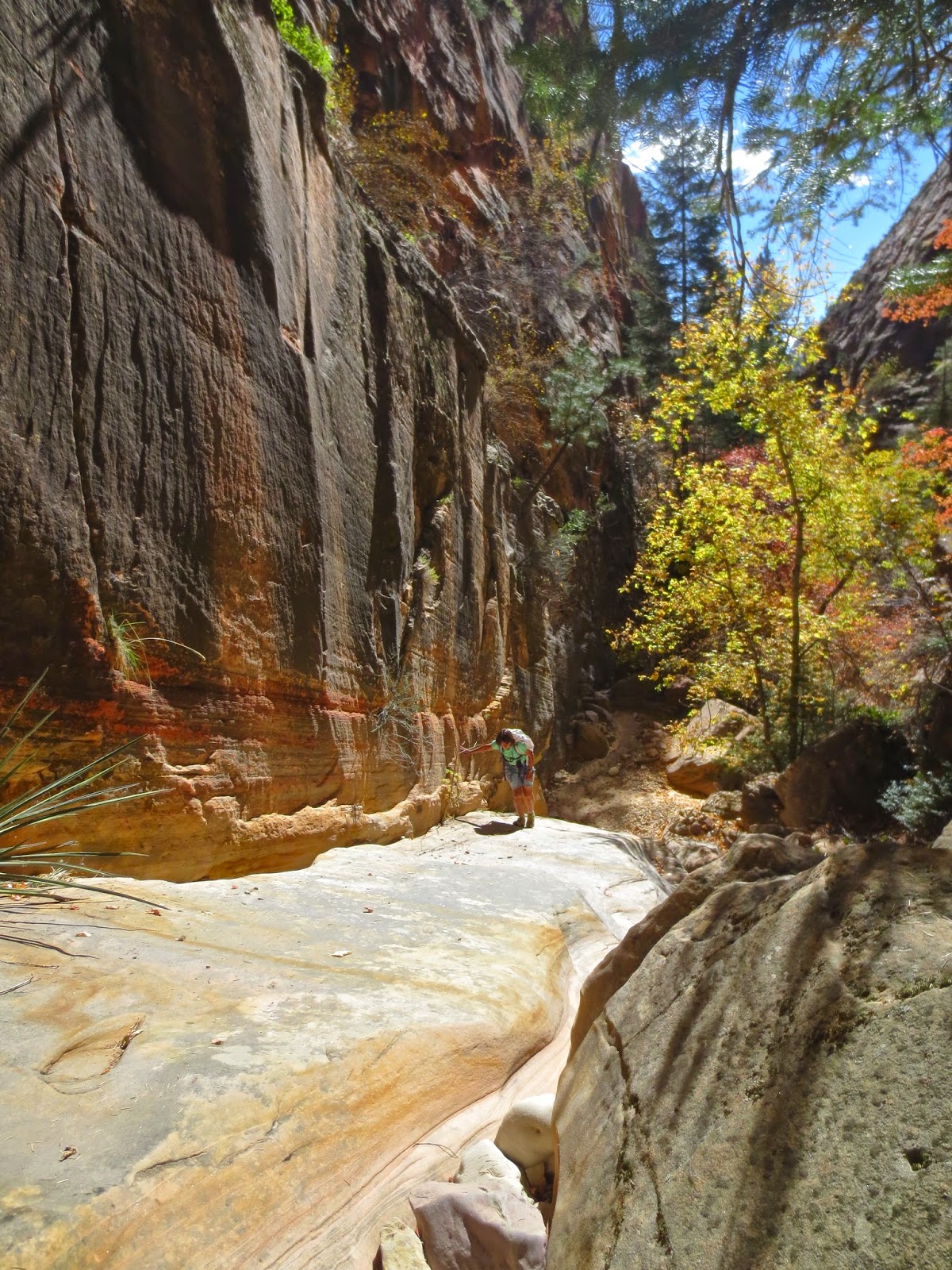 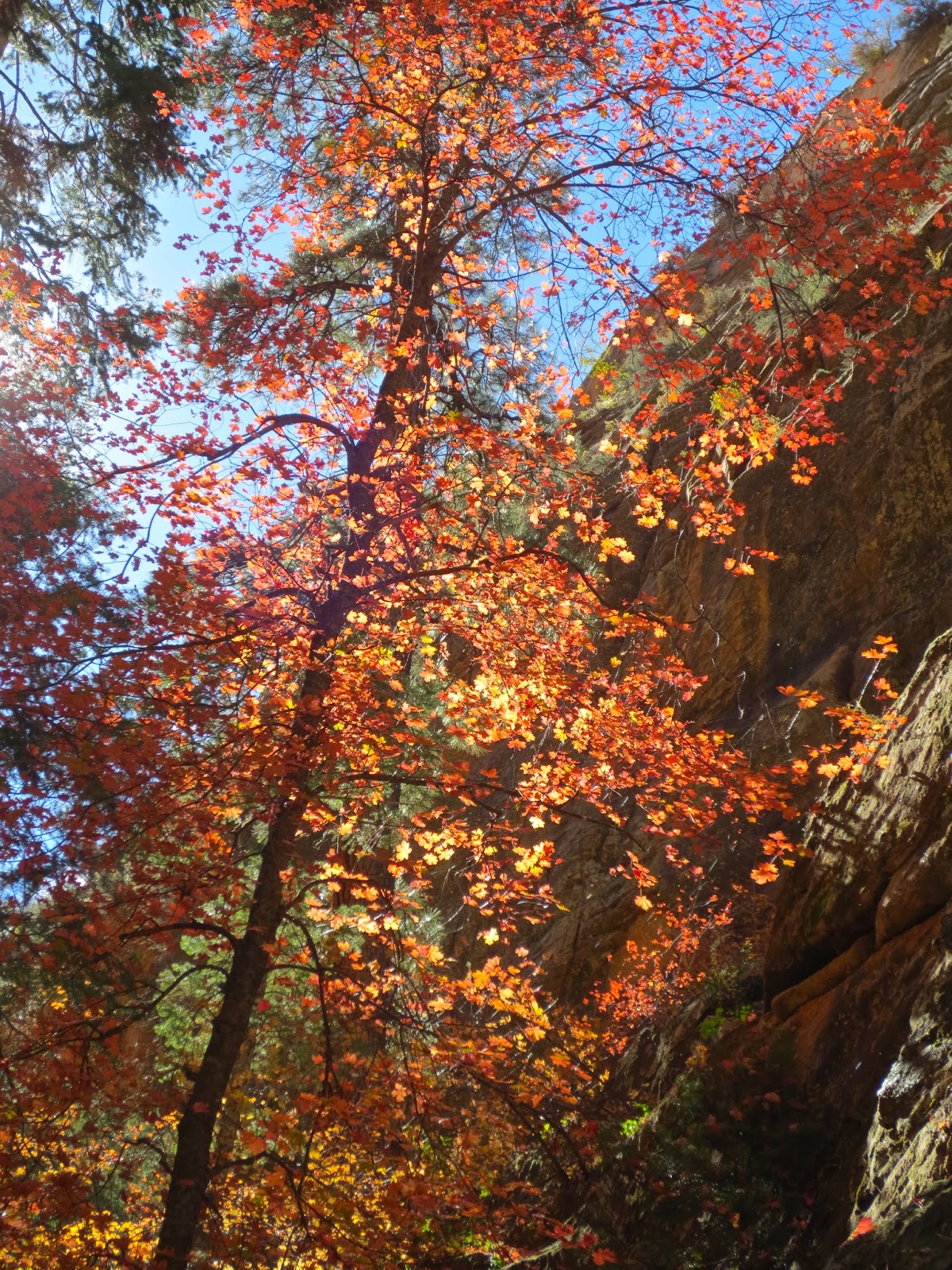 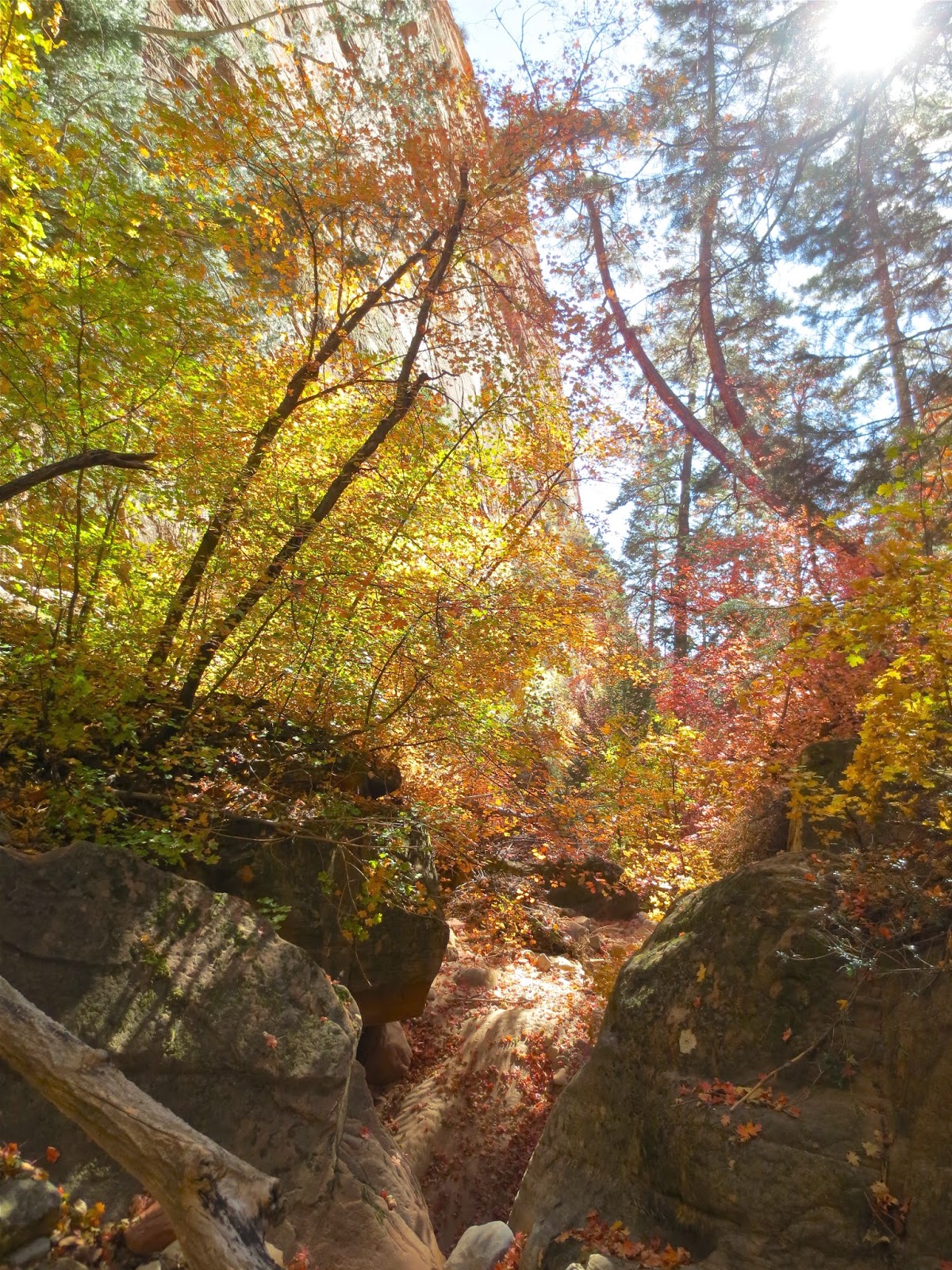 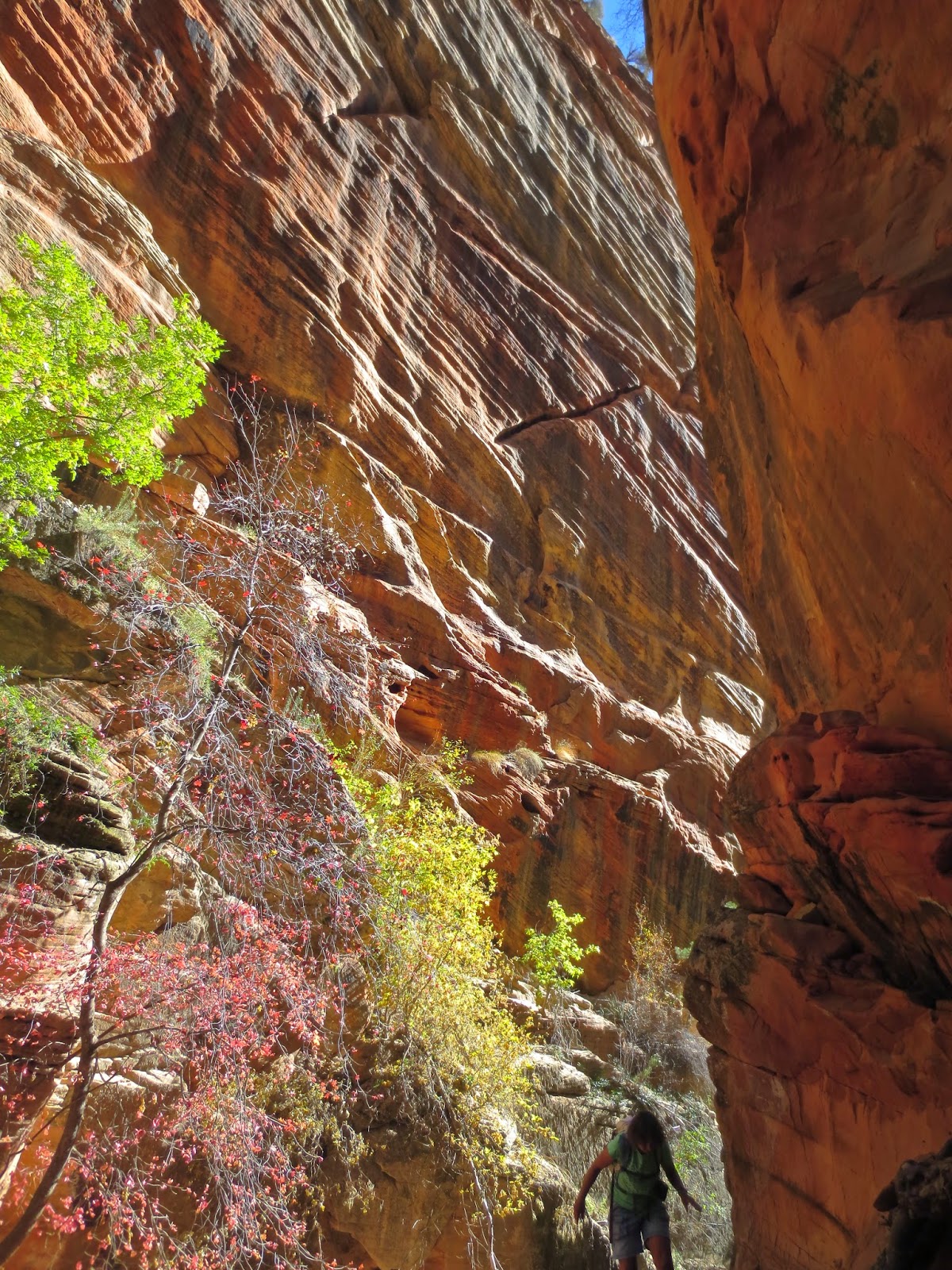 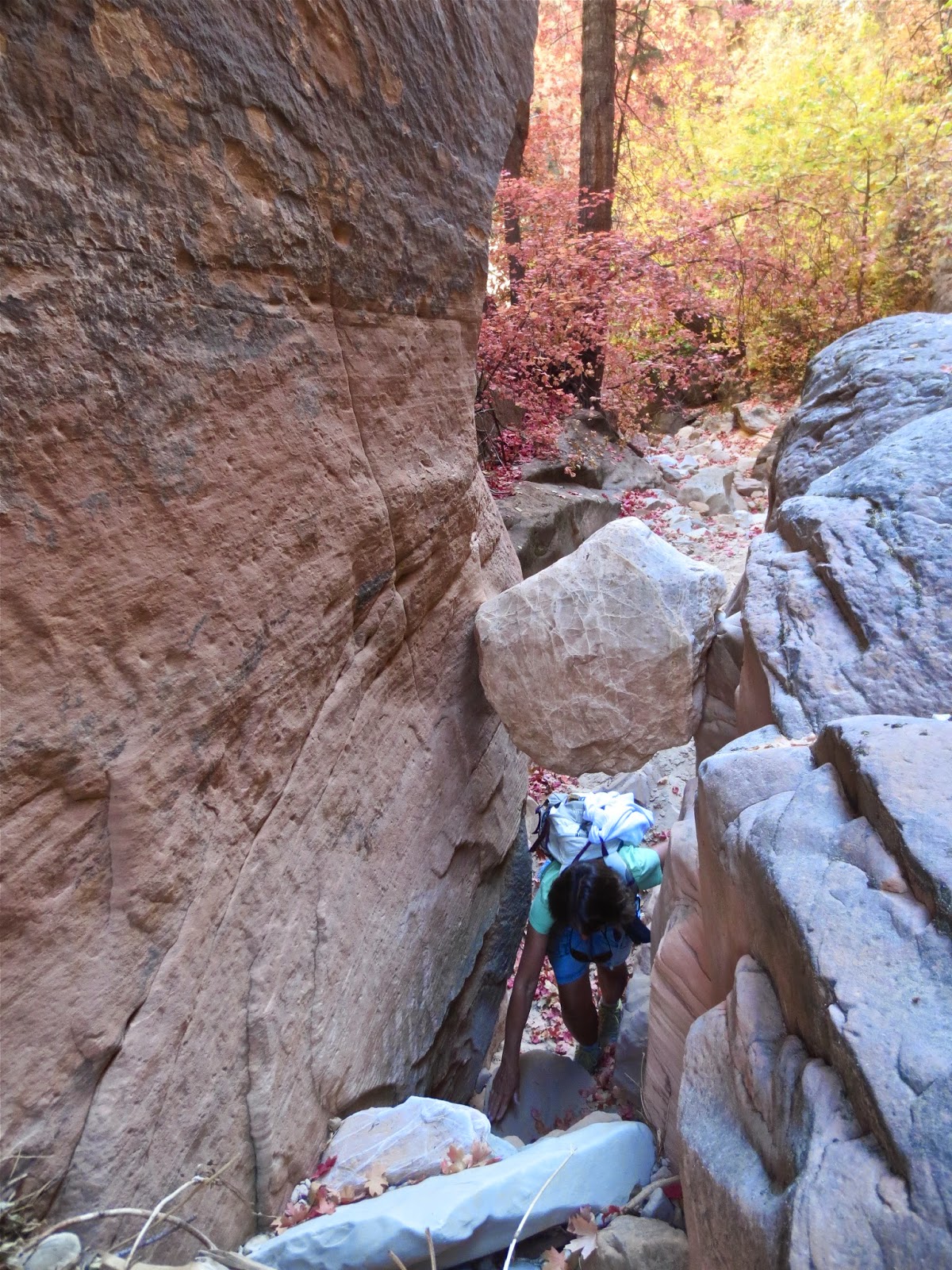 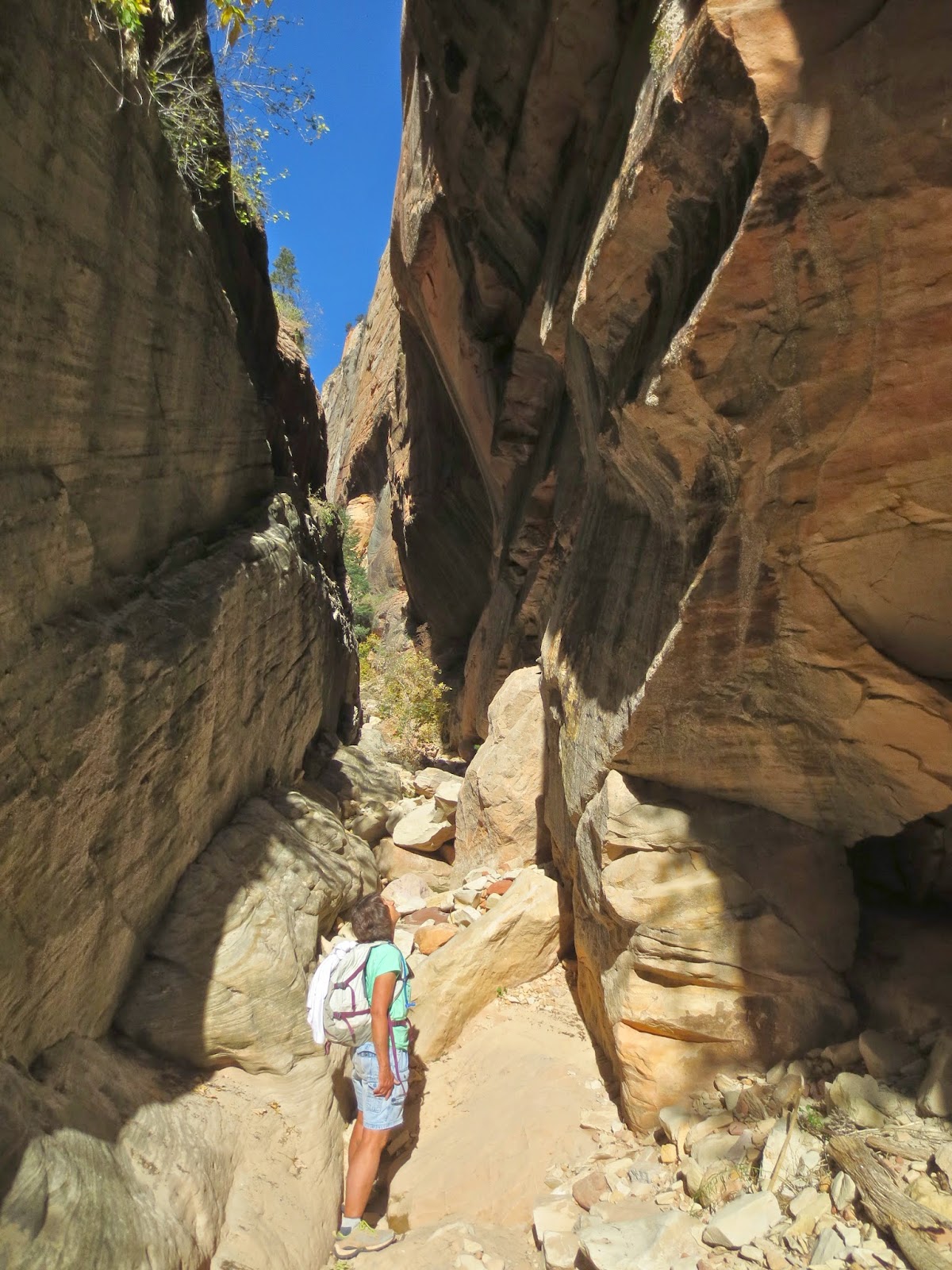 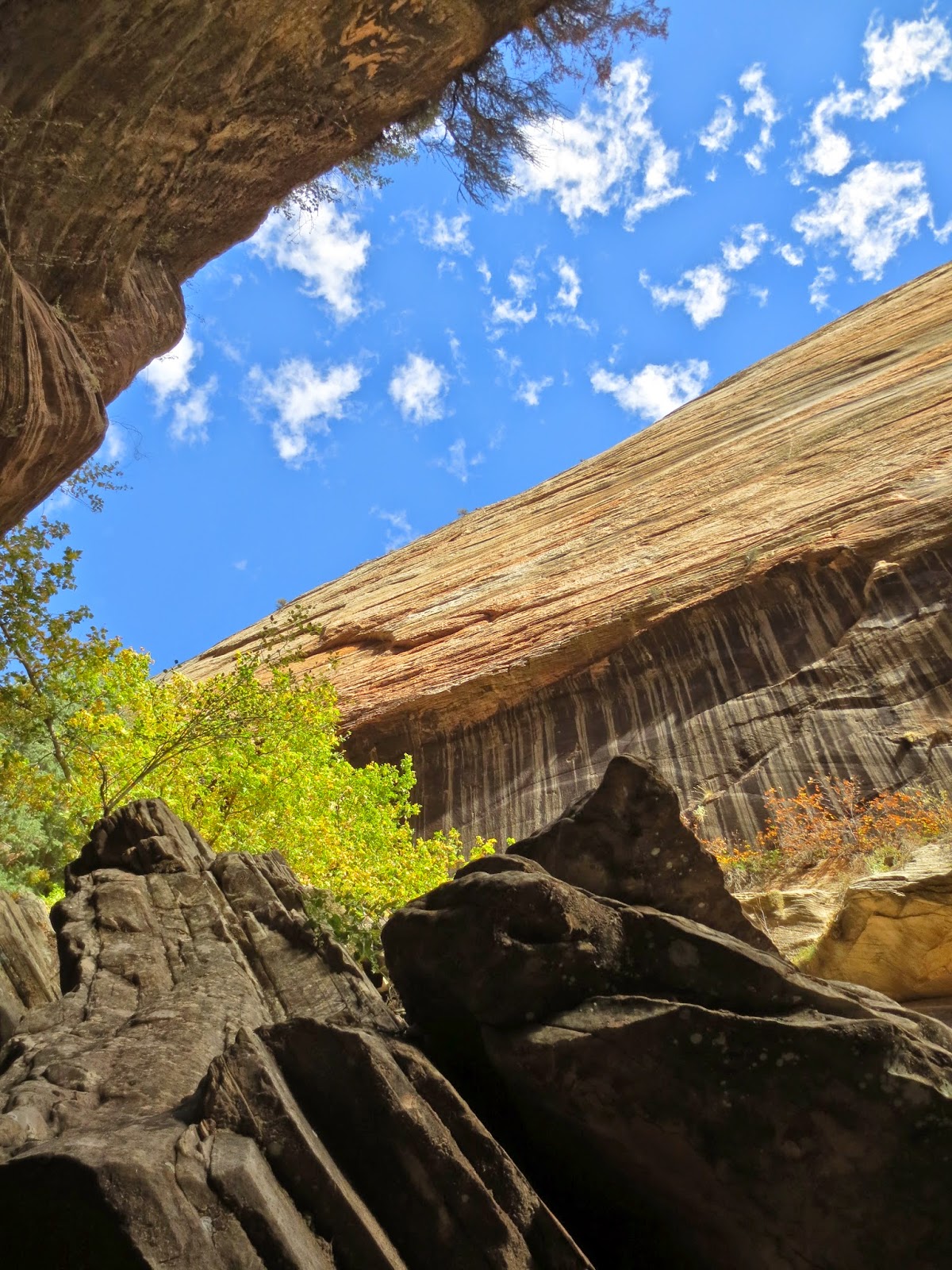 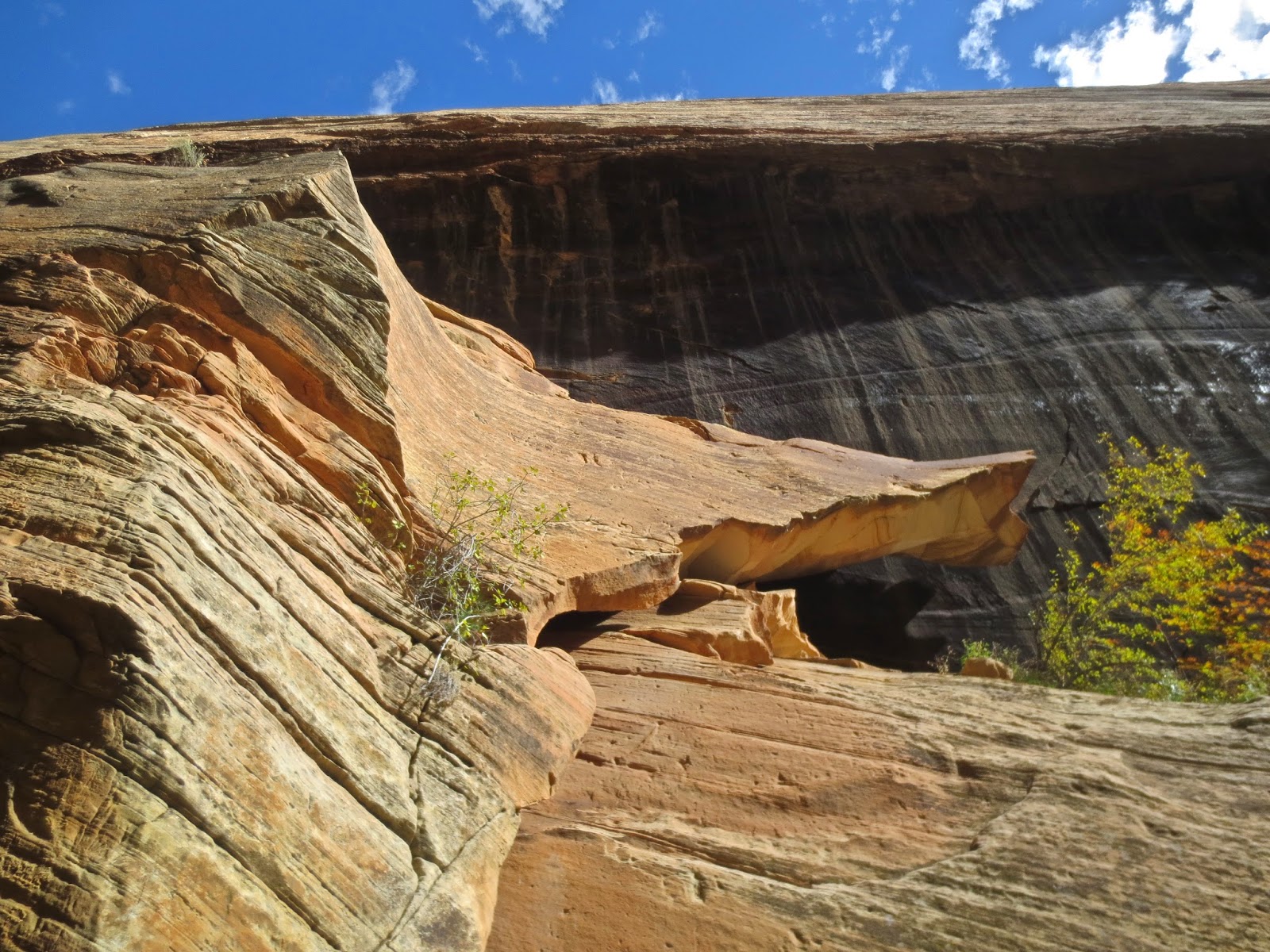 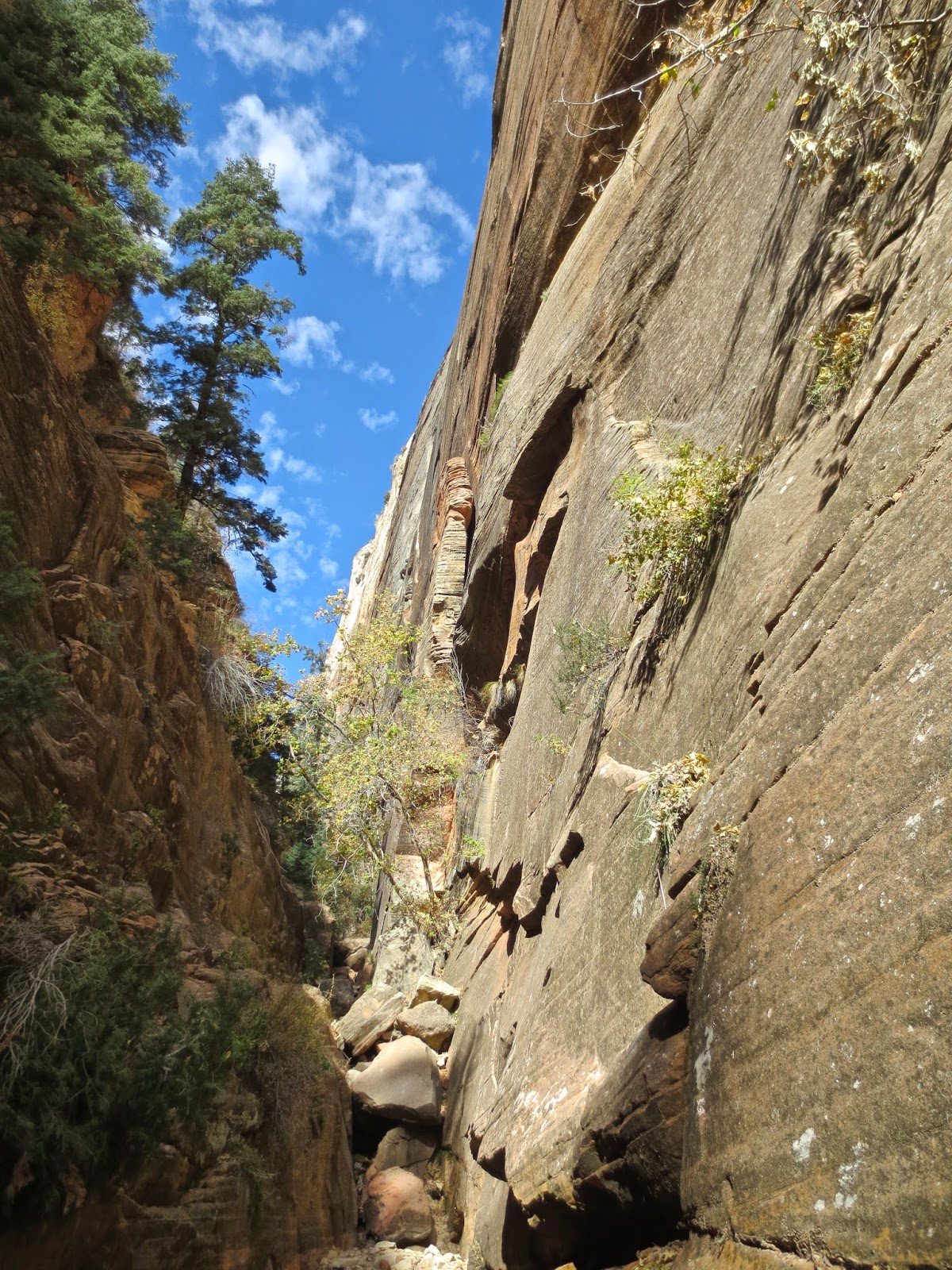 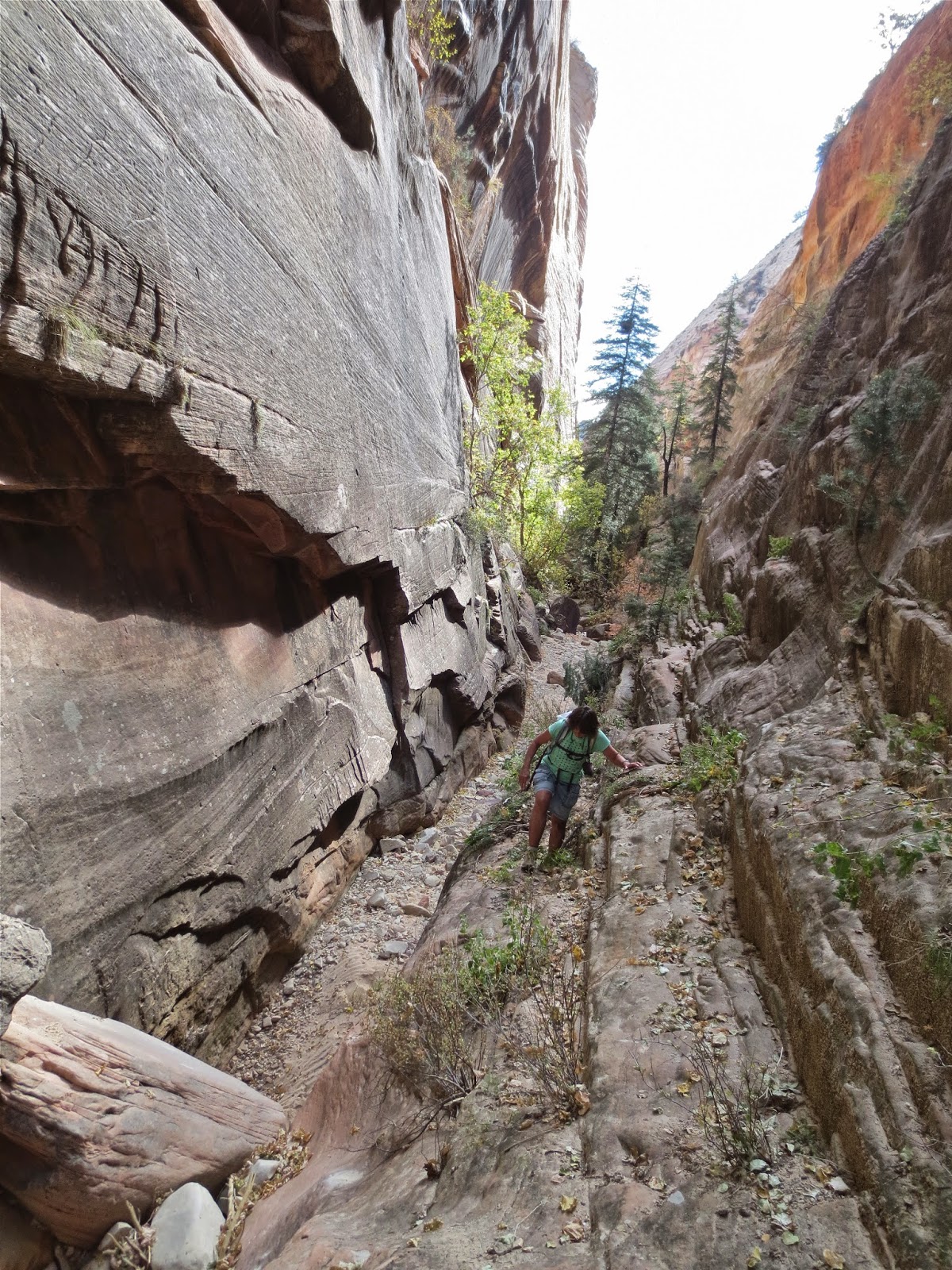 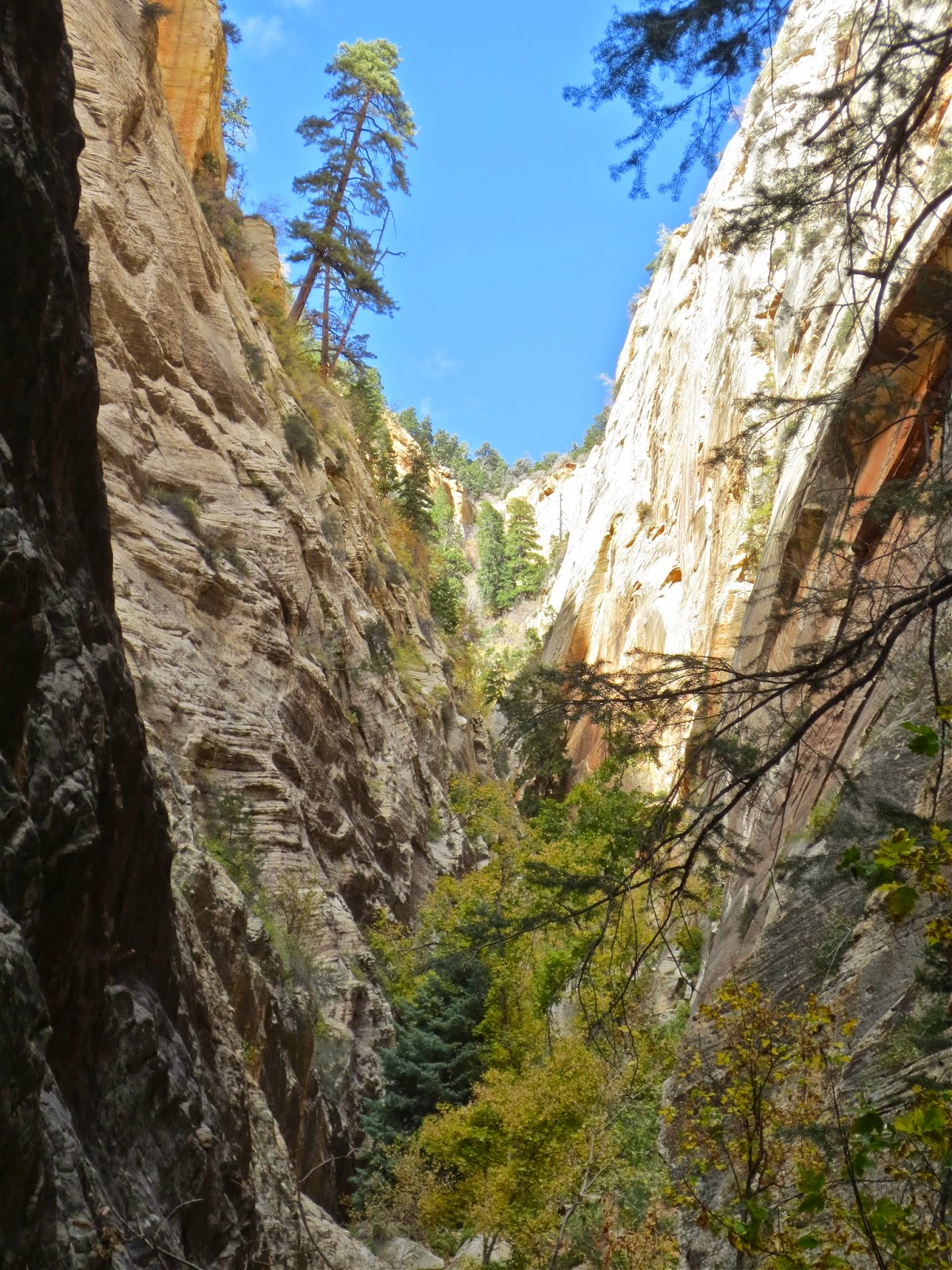 Two and a half hours later, we find the canyon's escape hatch. It's getting late, but if we can break out on top we should be able to intersect the East Rim Trail…a left landing us down in Zion's main corridor, and a right back on the pavement at the east entry station. Hmmmm.

Stay tuned for part II.
Happy Sunday…
Peace out
mark and bobbie
Posted by Box Canyon Blog.com at 8:05 AM