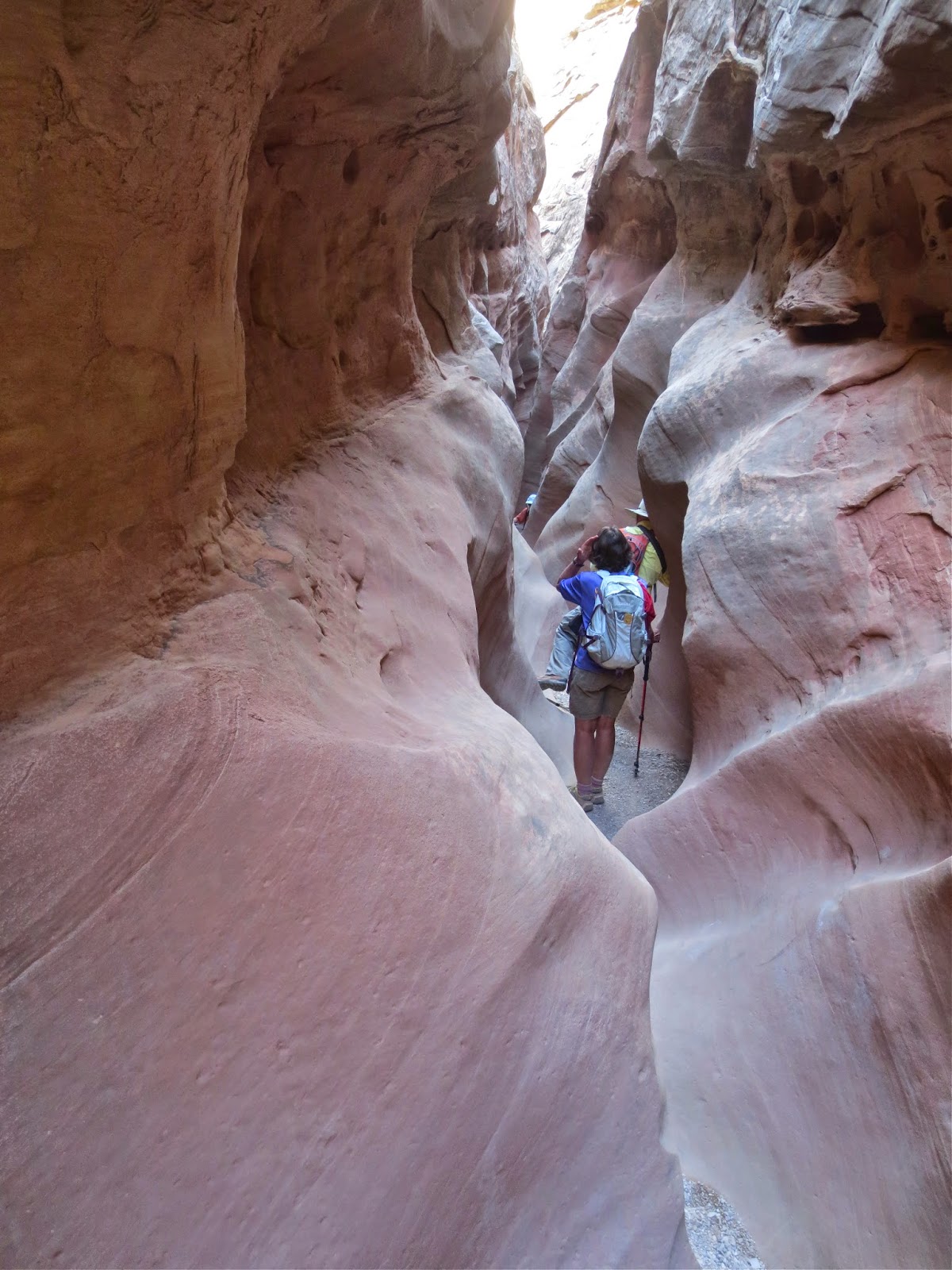 I guess I misunderstood. Might as well get used to it because it's happening more and more the older I get. Bobbie says I don't listen. I'm beginning to think that maybe she's right, but that's another blog post.

You see, I thought the UAE holiday was a "Monday" holiday. So I assumed that if we hiked the Bell/Little Wild Horse slot canyon loop on Friday we'd beat the Exodus of Mormon Pilgrams from greater Salt Lake to the punch. But you know what happens when one assumes, it usually makes an "ass" out of "u" and "me." Turns out the holiday fell on Thursday and friday. Ops… my bad.

We got a late start. Newbie Suzanne was five minutes tardy for muster. "We got a lot of highway, people. Let's move it." Suzanne took the pressure off Jim, who is usually the Reluctant Riser Supreme Grand Poo Baa of our group. I don't know how he ever made it to work on time... must have a night shift job.

It would take a little over an hour and a half to get to the trailhead, but it was a beautiful sunrise and the red cliffs were all aglow. My first clue that something was amiss was a massive jumble of RVs jammed up against the San Rafel Swell. God, it looked like a train wreck.

We got the last spot in the official parking lot, and bailed out to don packs. "Crap! Looks like we aren't going to have this hike all to ourselves," I said…a little too loud. A cute little blond girl, already covered in red dust from head to toe, stared at me like I was the intruder. Her scrunched up expression said, "First come, first served, butt-wad." She had a flock of siblings running amuck—all about a year apart, all blond headed, a typical Mormon family. There was a line at the outhouse and a tell-tale haze of dust hanging over the trail. Damn. 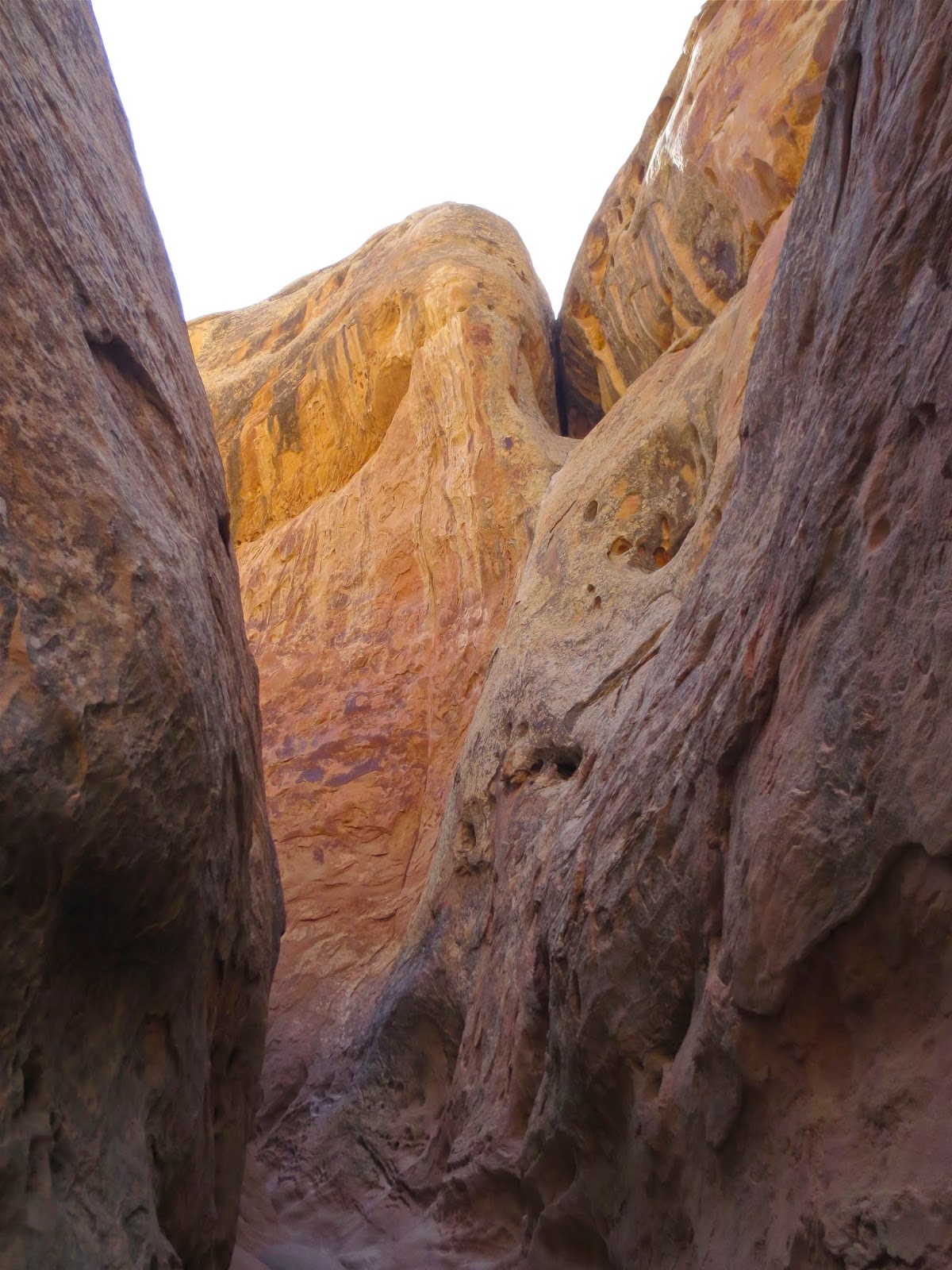 Being troop leader on this outing, I made the call to go up Bell and come down Little Wild Horse. The latter is the narrowest and more classic of the two canyons, so... I "ass/u/me (d)" that most of the current visitors would go there and would be gone by the time we came around to it. Later I learned of a consensus among our group that, more or less, I got it bass-acward. There were whispers of, "Mutiny on the Bountiful Land."  What can I say, those who lead are easy targets (sigh).

In my defense, I did get it half right. Except for a mother/daughter duo, we had Bell Canyon all to ourselves. It was positively wonderful. But then we caught up with the duo, stuck at a rather large "choke-stone" impasse. They were about to give up and turn around, but, kind hearted soul that I am, I offered my knee as a stepping stone and told them, "Peace of cake, come on." Well, it wasn't a piece of cake for "mom." I had to push with both hand on her ass in order to keep her from falling back on top of me. Finally she keeled forward and rolled (flailed) her way to safety, then promptly stood up and dusted my two gigantic handprints off her backside.

Her rather "hot" daughter, having just witnessed this "assault," told me she wouldn't need any help beyond using my knee as a "step." You win some; you lose some :(.  I did get manage to get my hands on Jim's butt, tho… everyone else played coy. 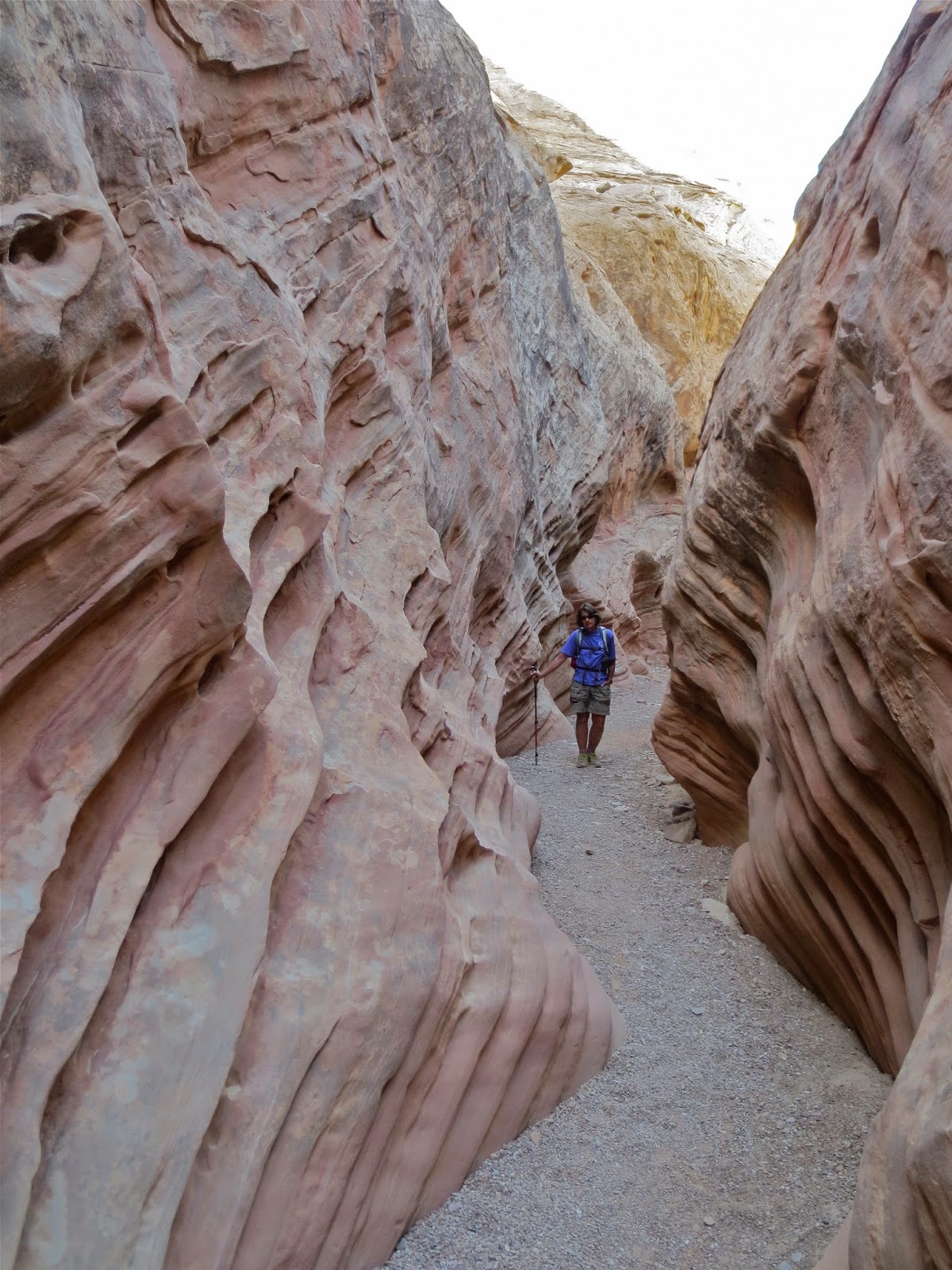 Note: Photos of Bell's slot canyon are on the previous post. Today's photos are from Little Wild Horse. For more photos of this and other great hikes, see Jim and Gayle's Life's Little Adventures and Suzanne's Take To The Highway. 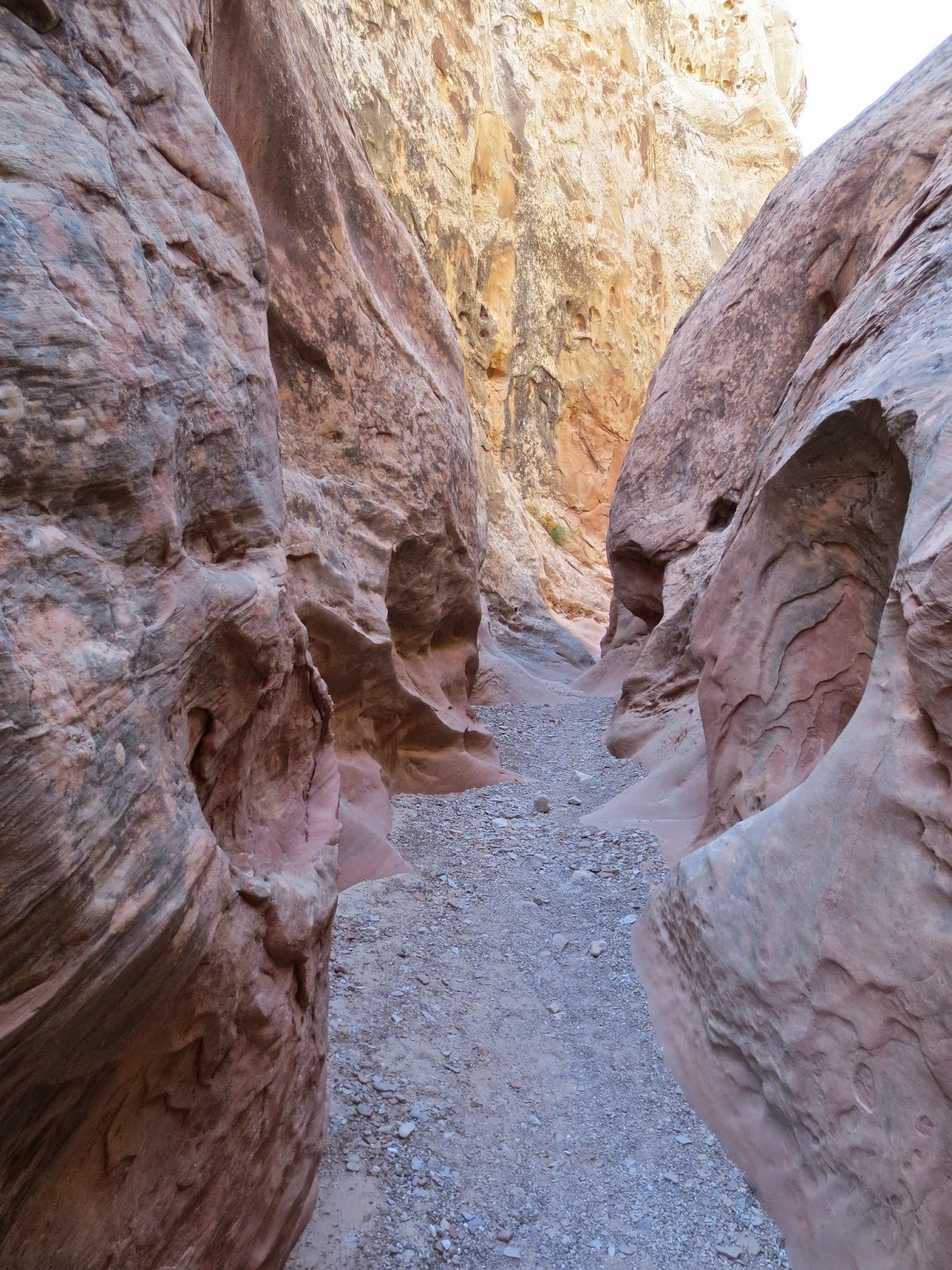 The mother/daughter "duo" scampered up canyon so fast we never saw them again, which left our group to enjoy Bell's wonders all by ourselves. I can't really say it was much quieter, tho. Some among us do like to chat it up :) 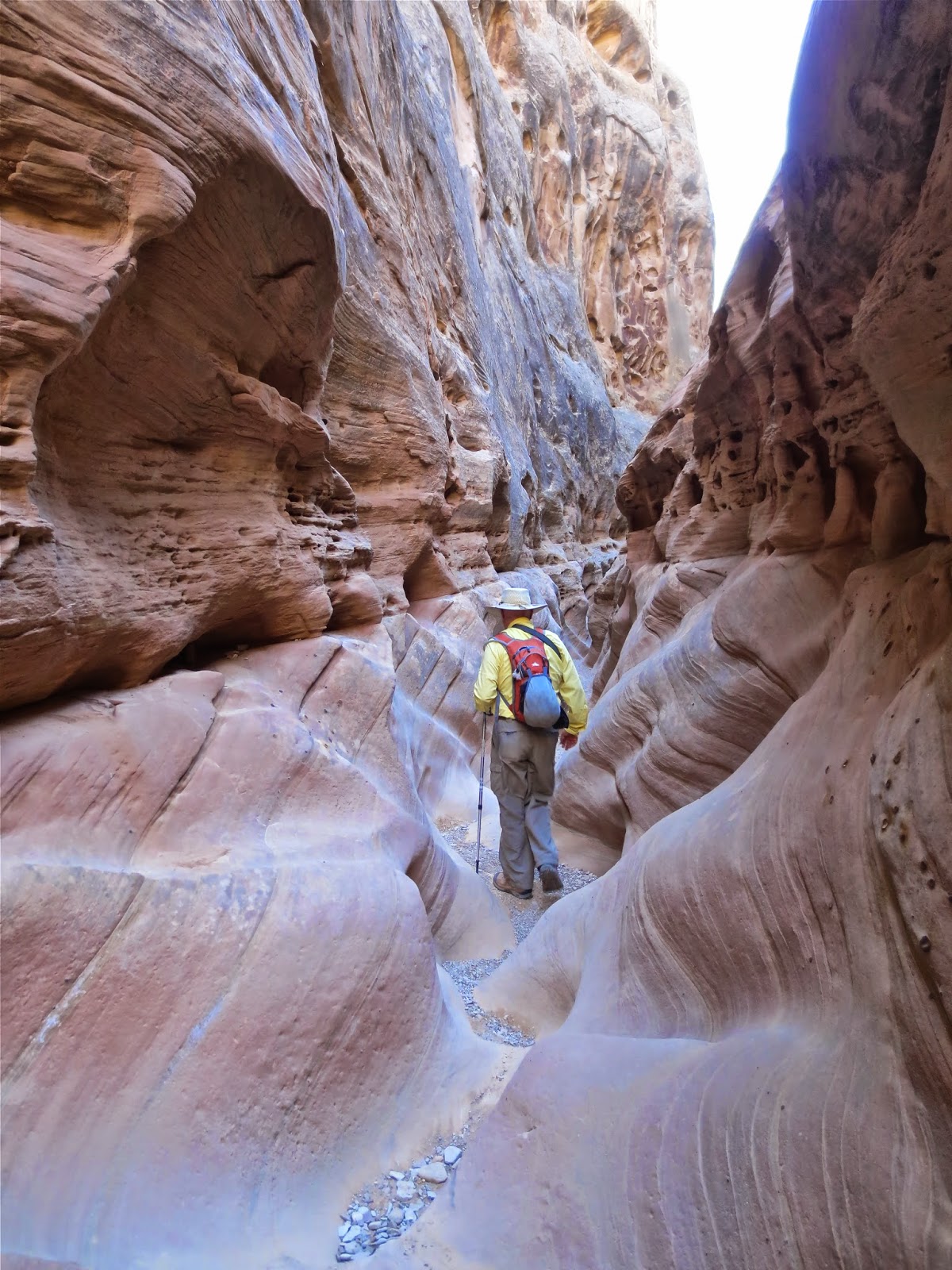 Everyone talked and acted like they were impressed with Bell, so I blurted out, "You ain't seen nothin' yet." Bobbie reminded me of how that always backfires. Backfire? I knew what was coming and there was no way it could backfire. Bell is nothing compared to Little Wild Horse. As you can see below, LWH is quite impressive. 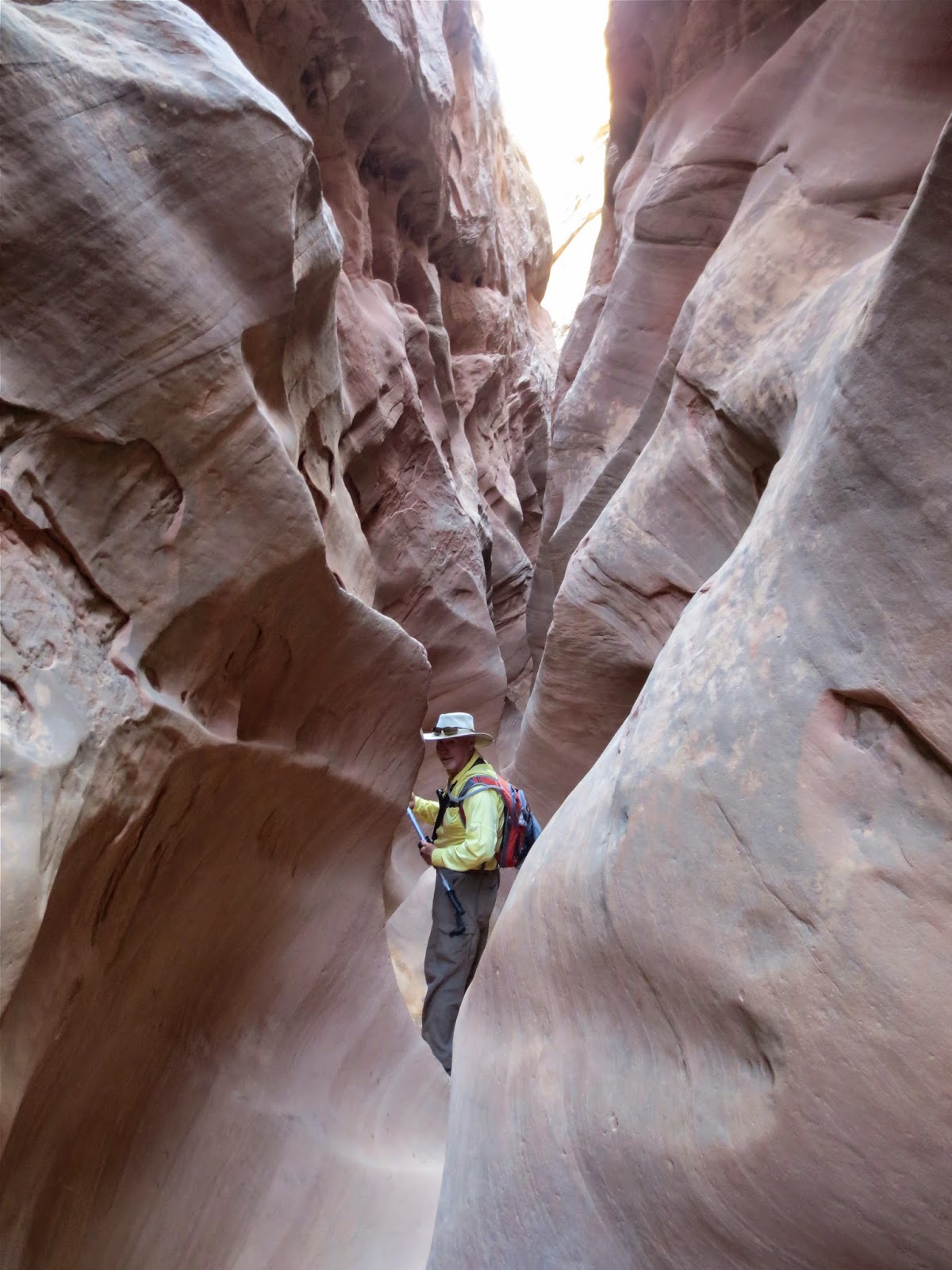 It happened so fast… not long after we dropped into upper Little Wild Horse. Suddenly we were stalled in a massive traffic jam. I asked some pimple-faced teenager if church had just let out. It was like attending a single file parade or a Bronco stadium exit in the fourth quarter of a lopsided game. I felt like a salmon in a chute, only going the wrong direction... swimming against a wake of smelly children chased by wild eyed parents, hollering, "get down/come back here/wait up/don't go up there/wheres your sister?/have you seen Brigham?/have you seen your mother?/get down/stand up… and so on, and so on, and so on.

The mass of humanity was relentless. We actually stopped to let an oncoming solid line of people squeeze past in a narrow spot, only to have a solid line of angry people build up behind us. Look, I've been in New York City on Black Friday, for crying out loud, and this was worse…ten times worse. At least in NYC I expected to be one in a million, but here? way out in the middle of nowhere? with little old Hanksville being the closest town? and Salt Lake City being four hours away? Never! I had the sinking feeling of letting our group down, especially after building this hike up. 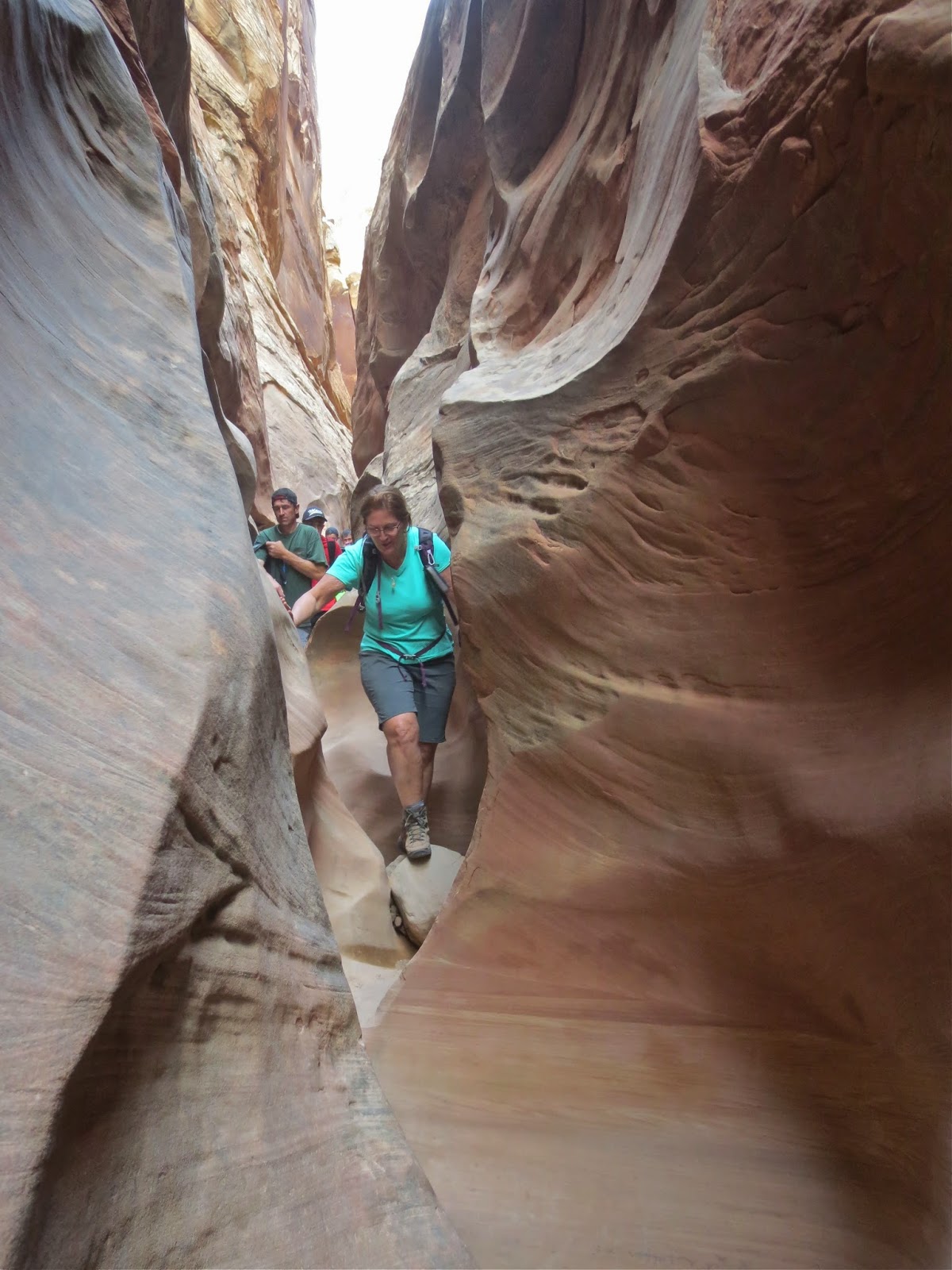 But she took it in stride, good sport that she is 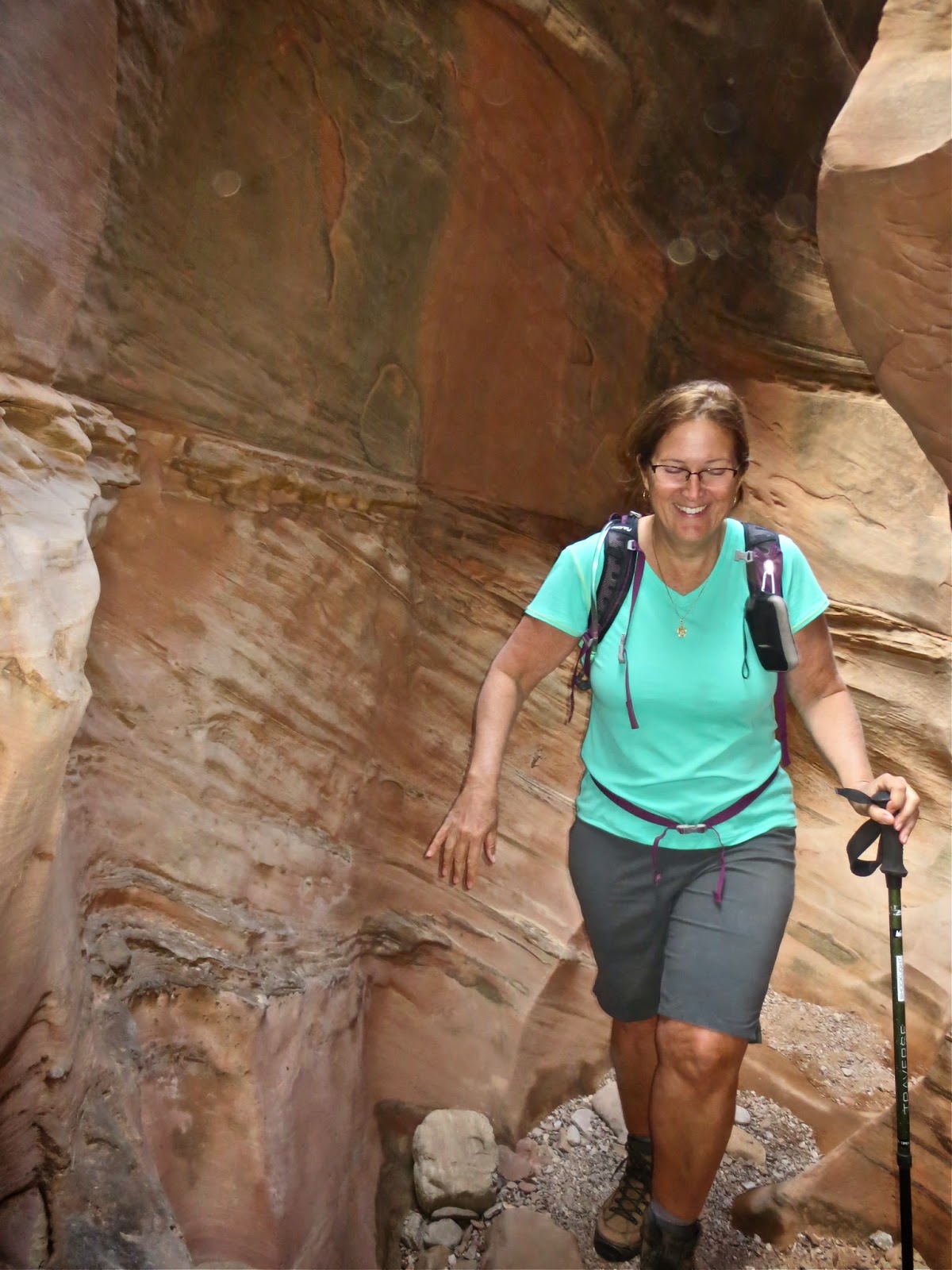 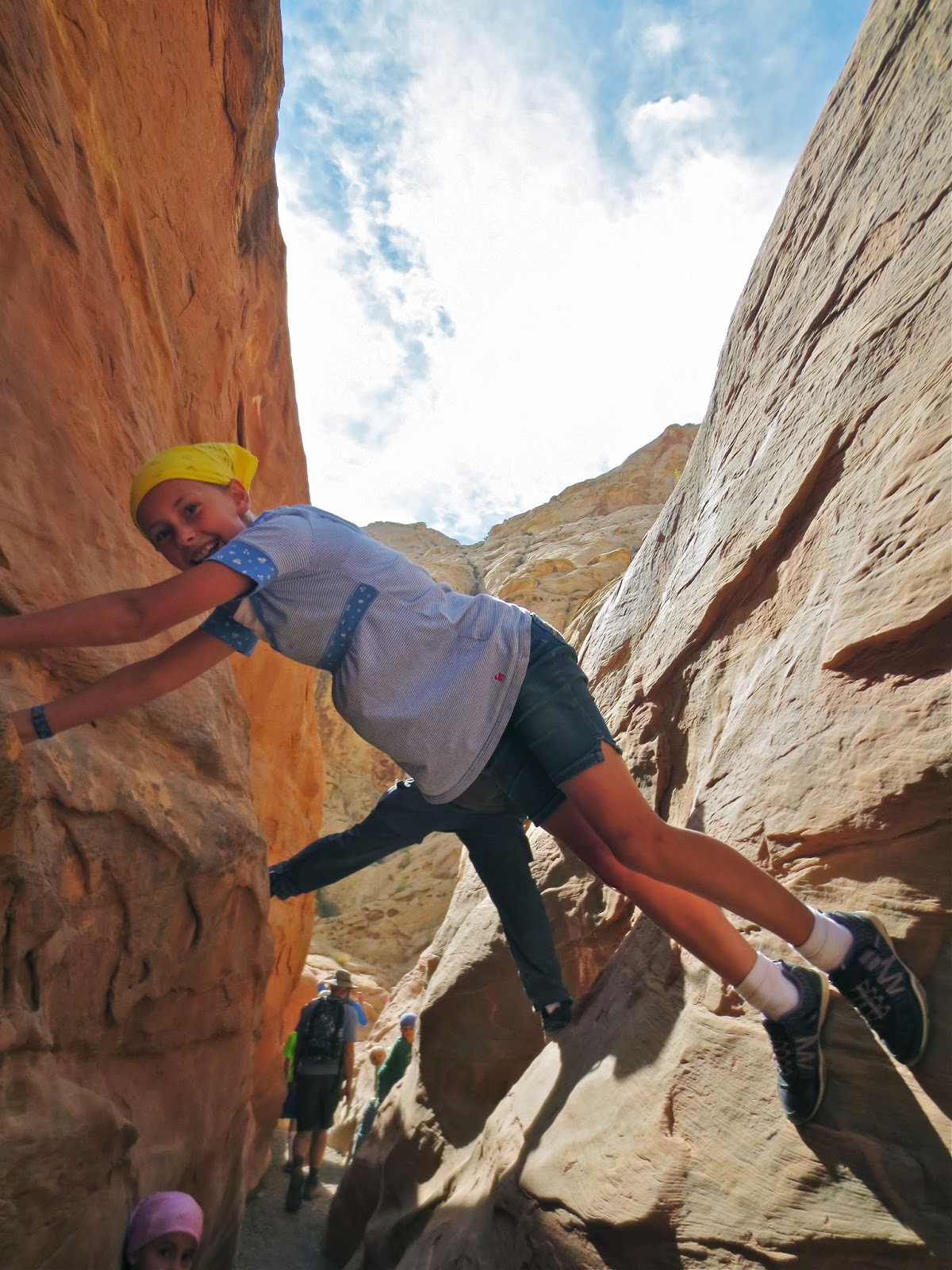 Imagine a single file hallway between classes at a major university. That's what we were up against…children climbing the walls and coming out from under rocks (which, by the way, is where my parents told me I came from when I finally asked "the question"). 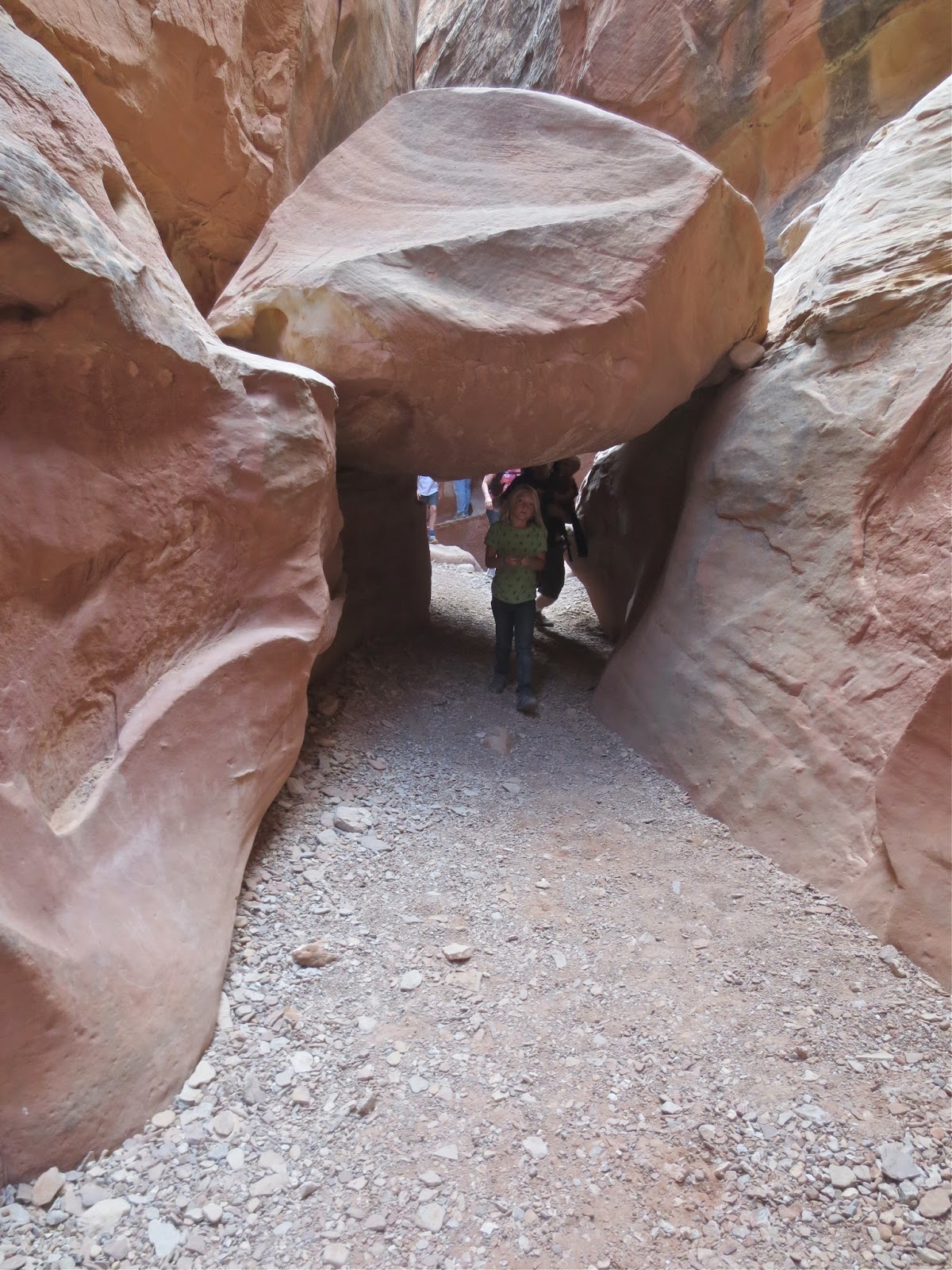 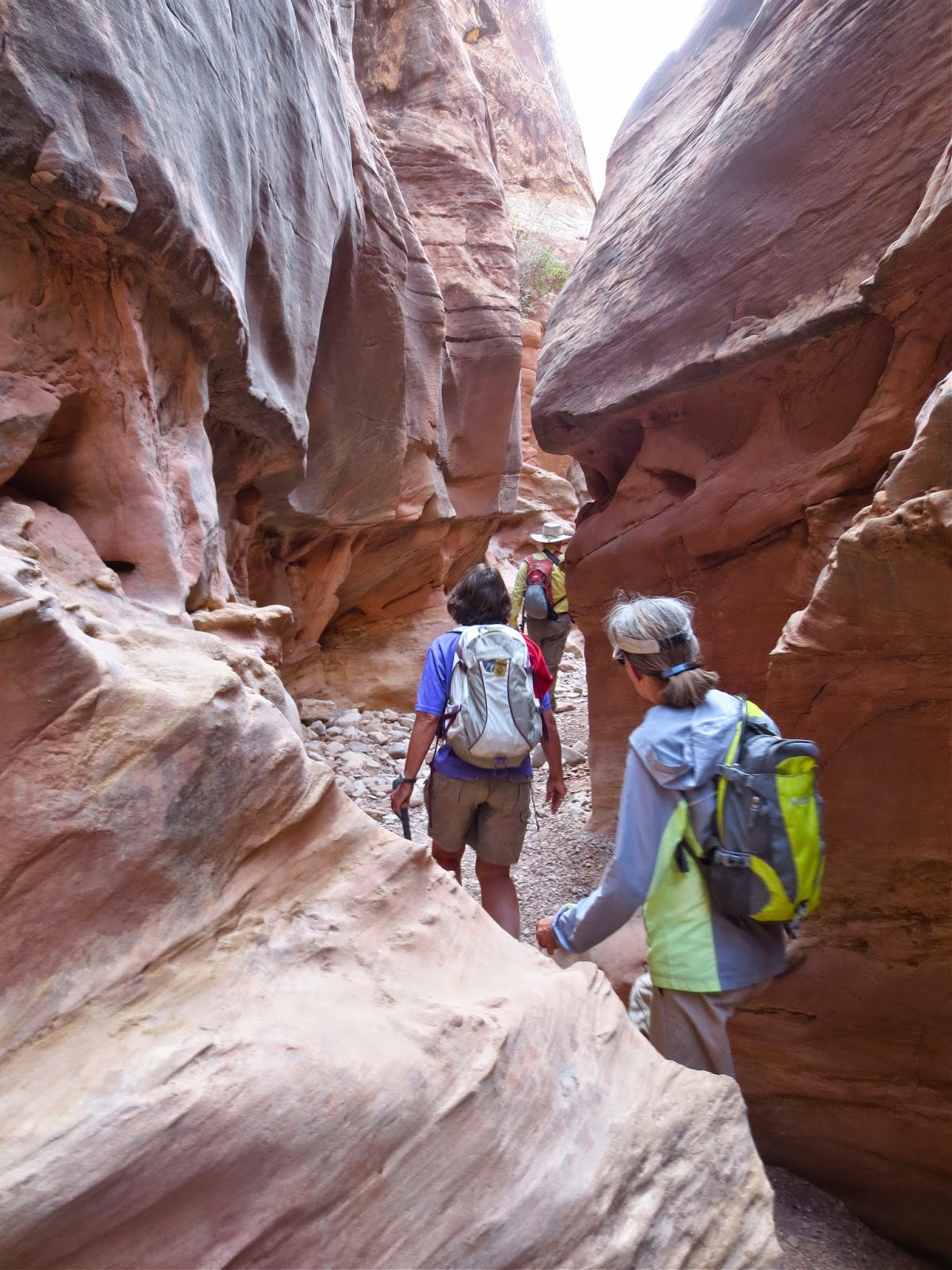 Finally we got to a wide spot, and took a collective deep breath of fresh air. 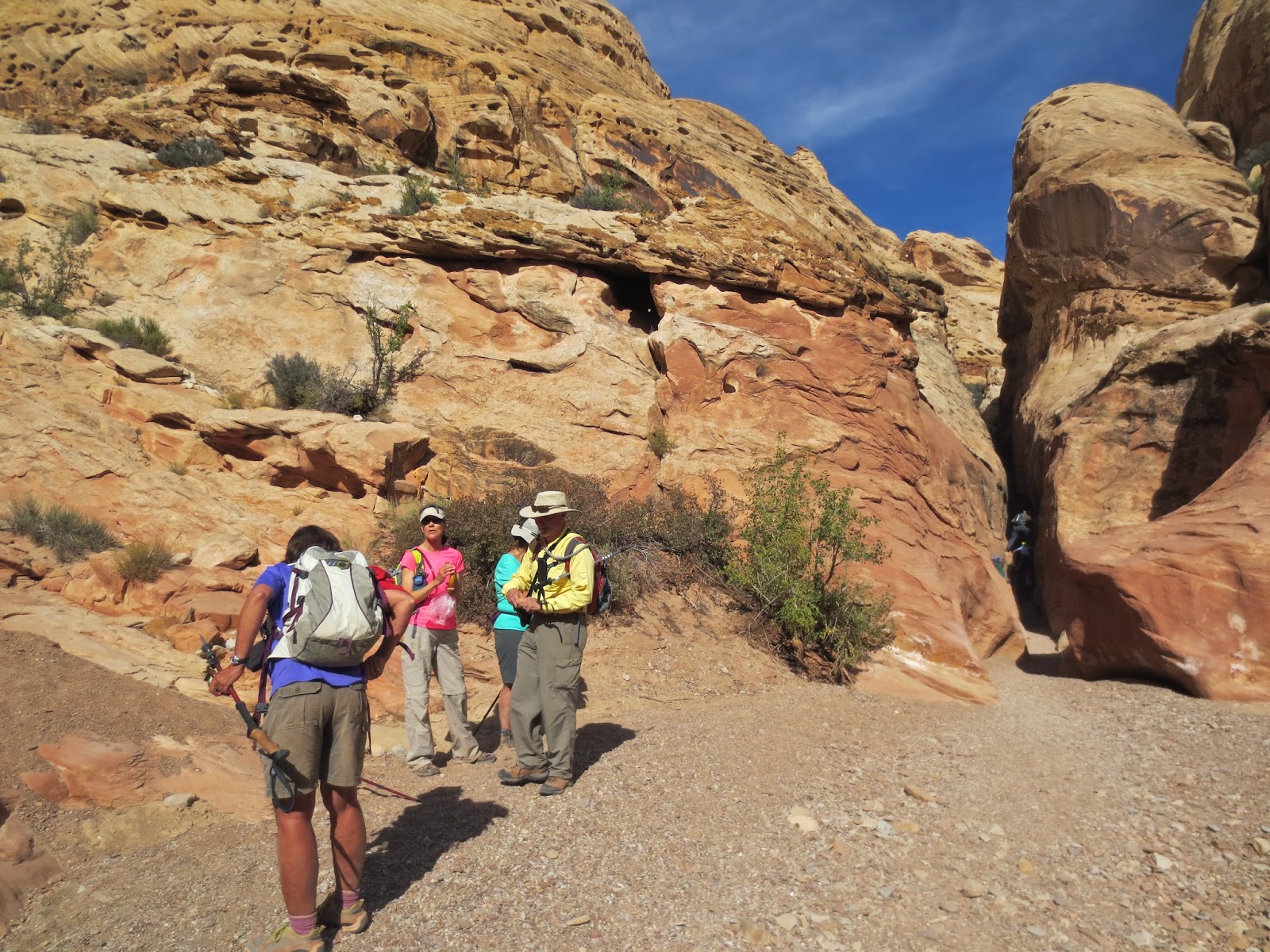 Then we were plunged back into another slot…so smooth, as if hand sanded, which isn't that far off the mark, really. 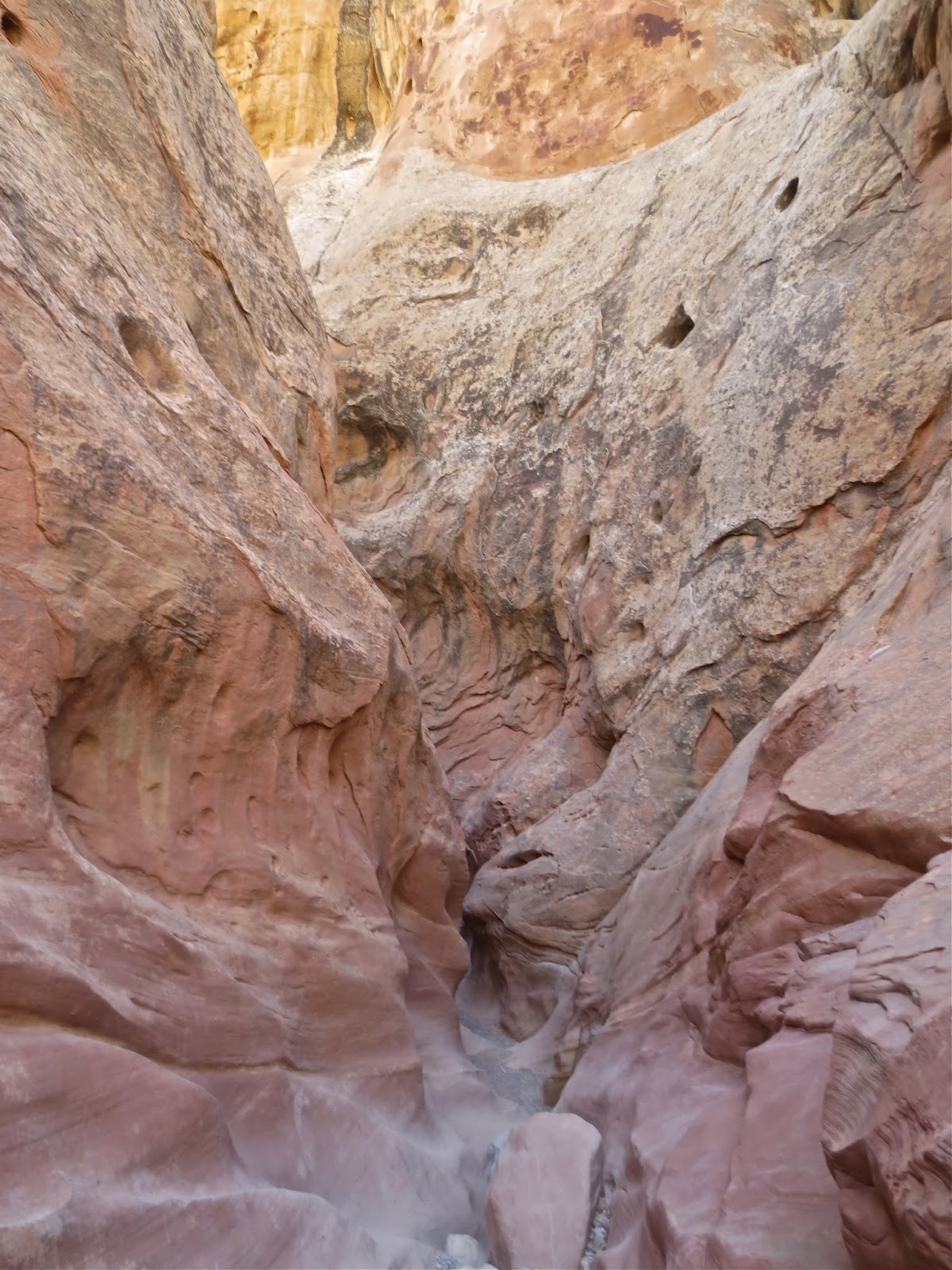 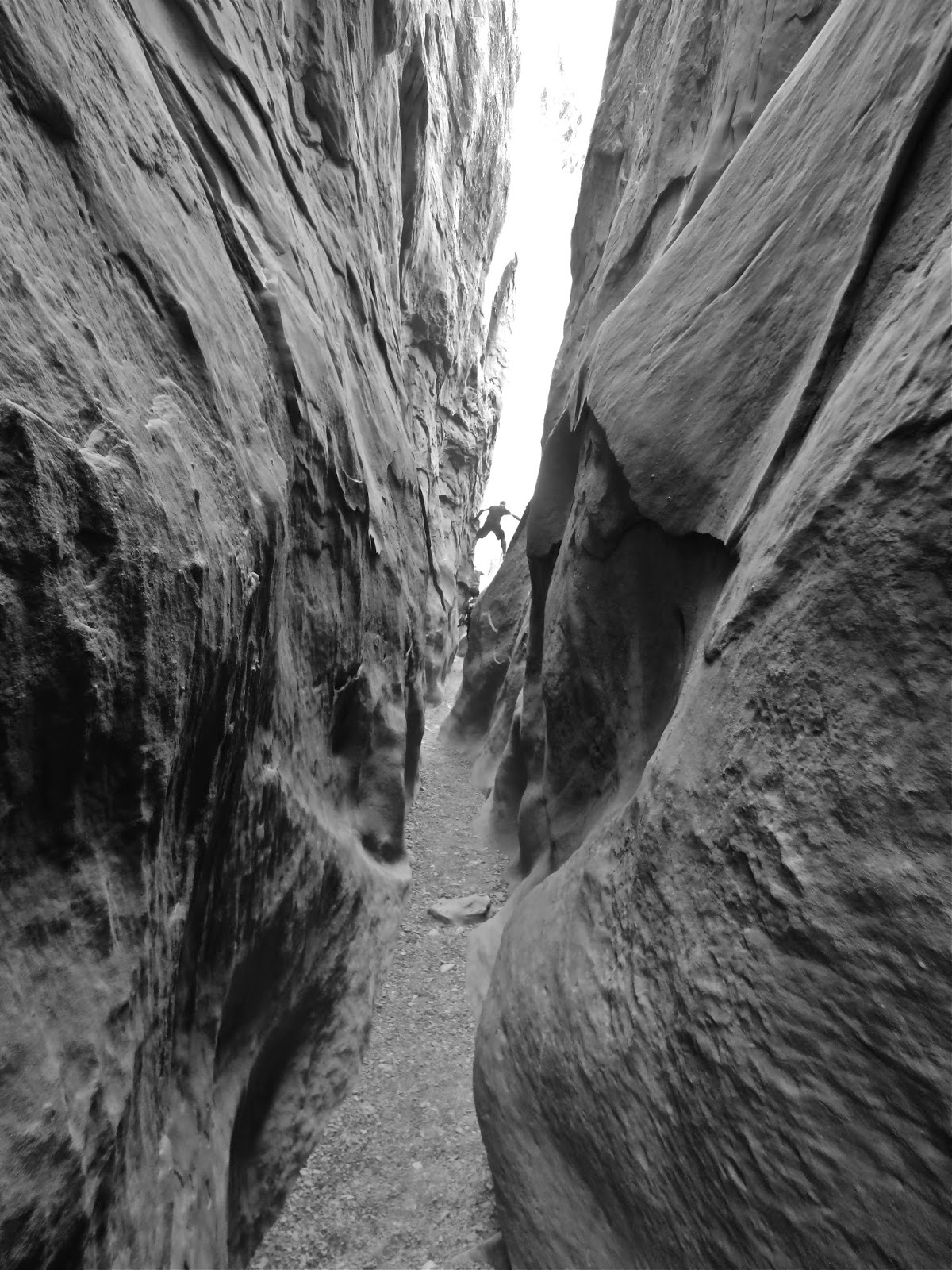 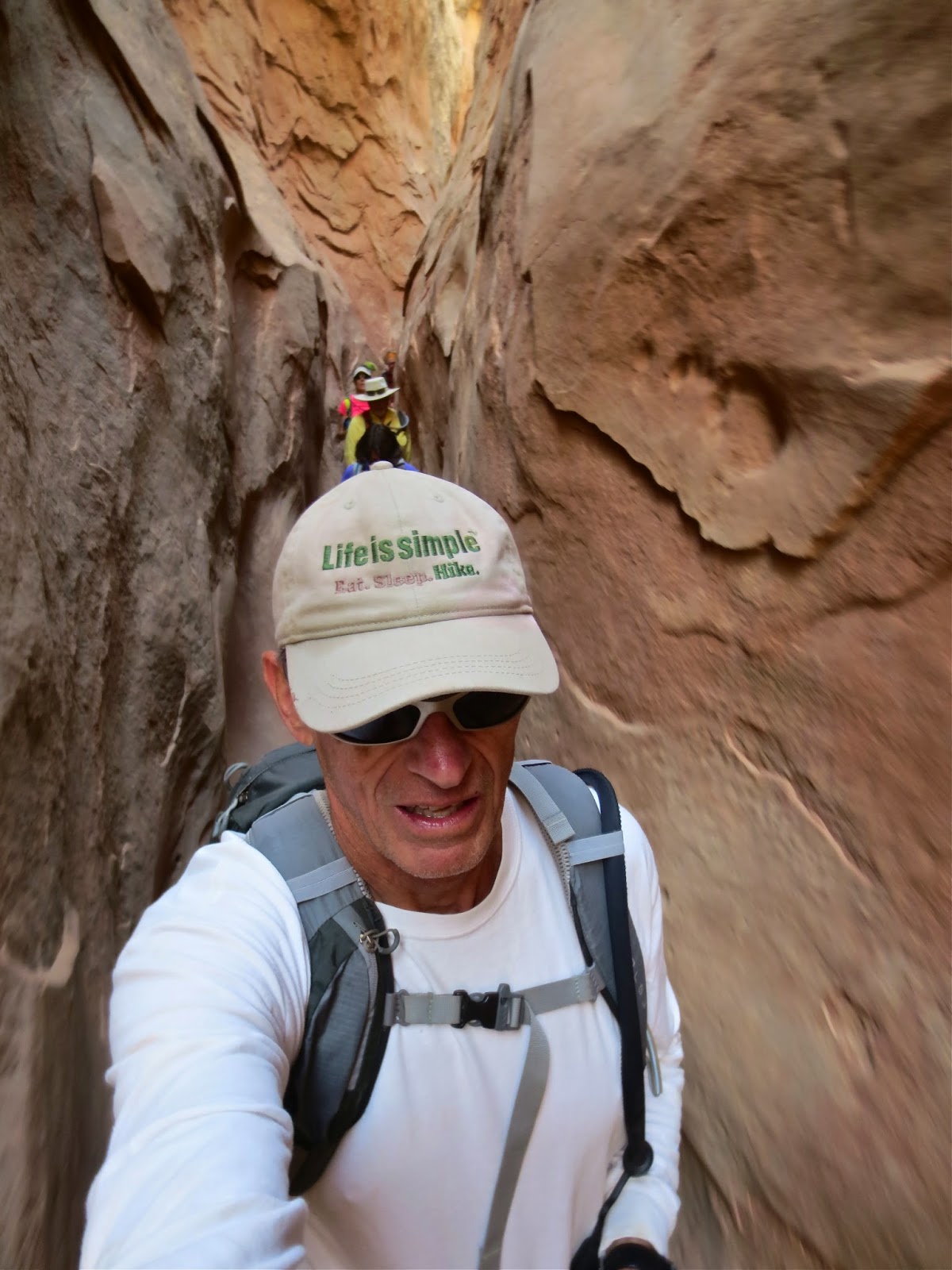 Forget the errant falling rocks and choke-stones, the biggest danger was from someone's kid falling on us…there was no way out but to go under them. 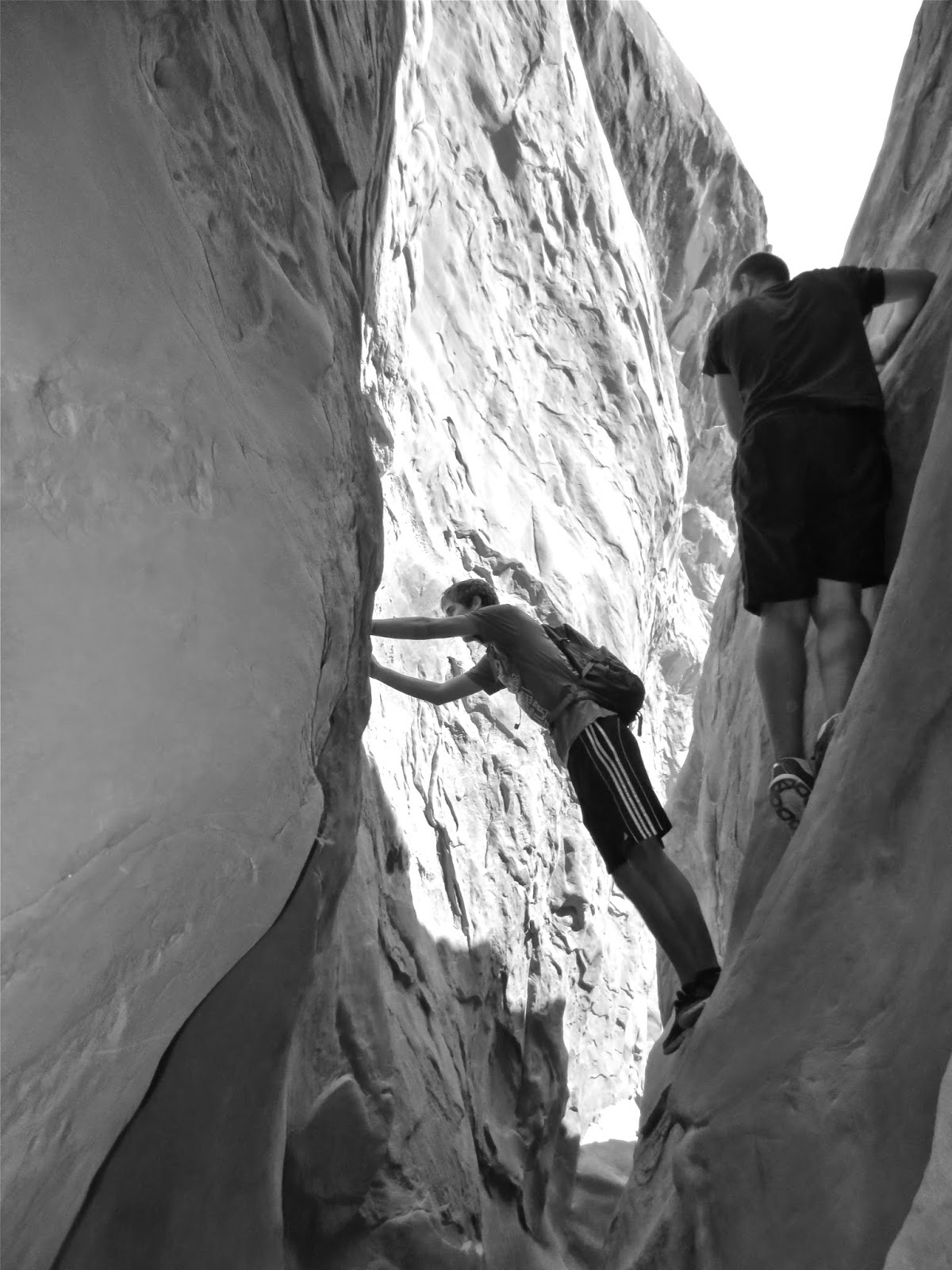 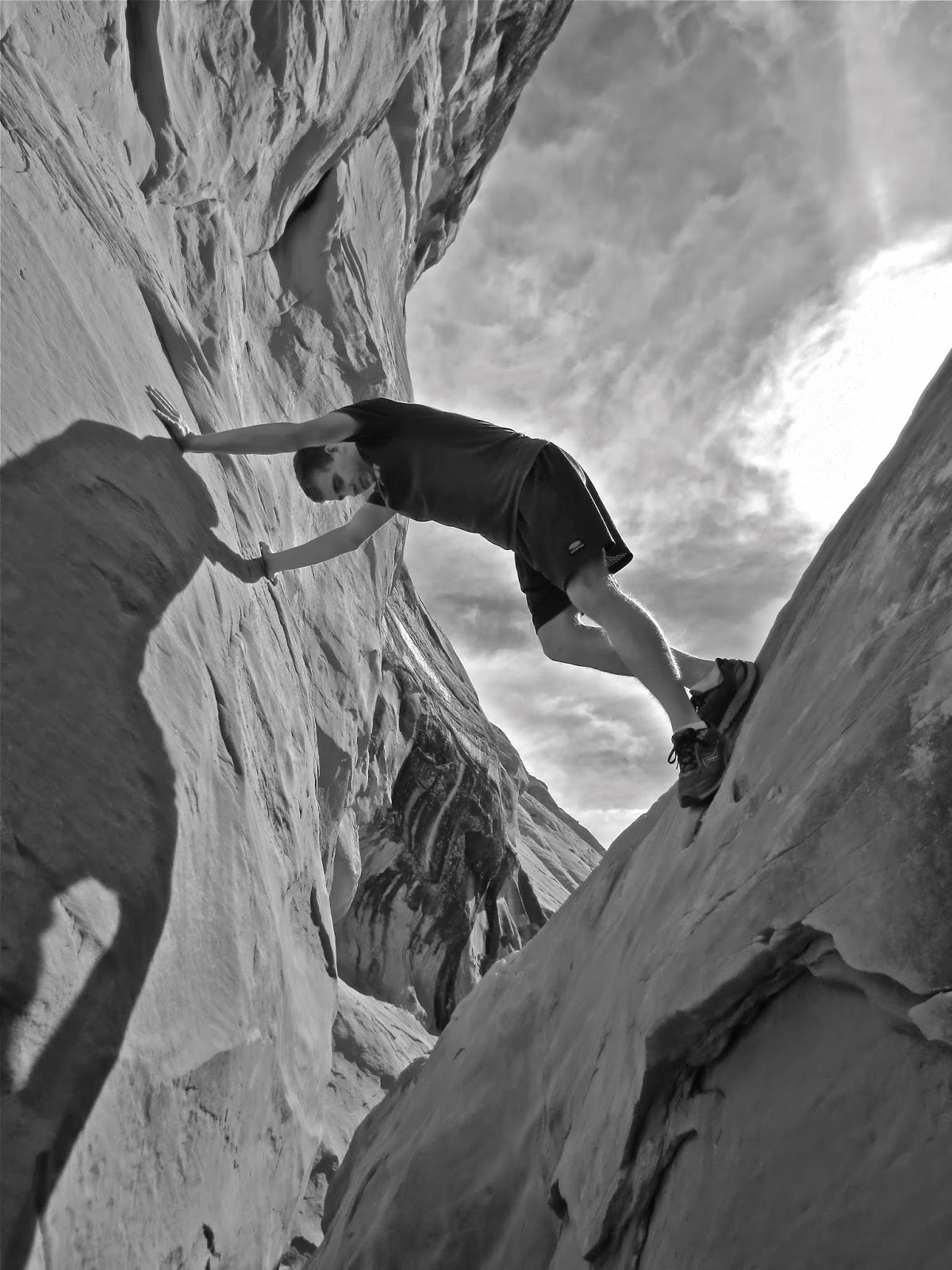 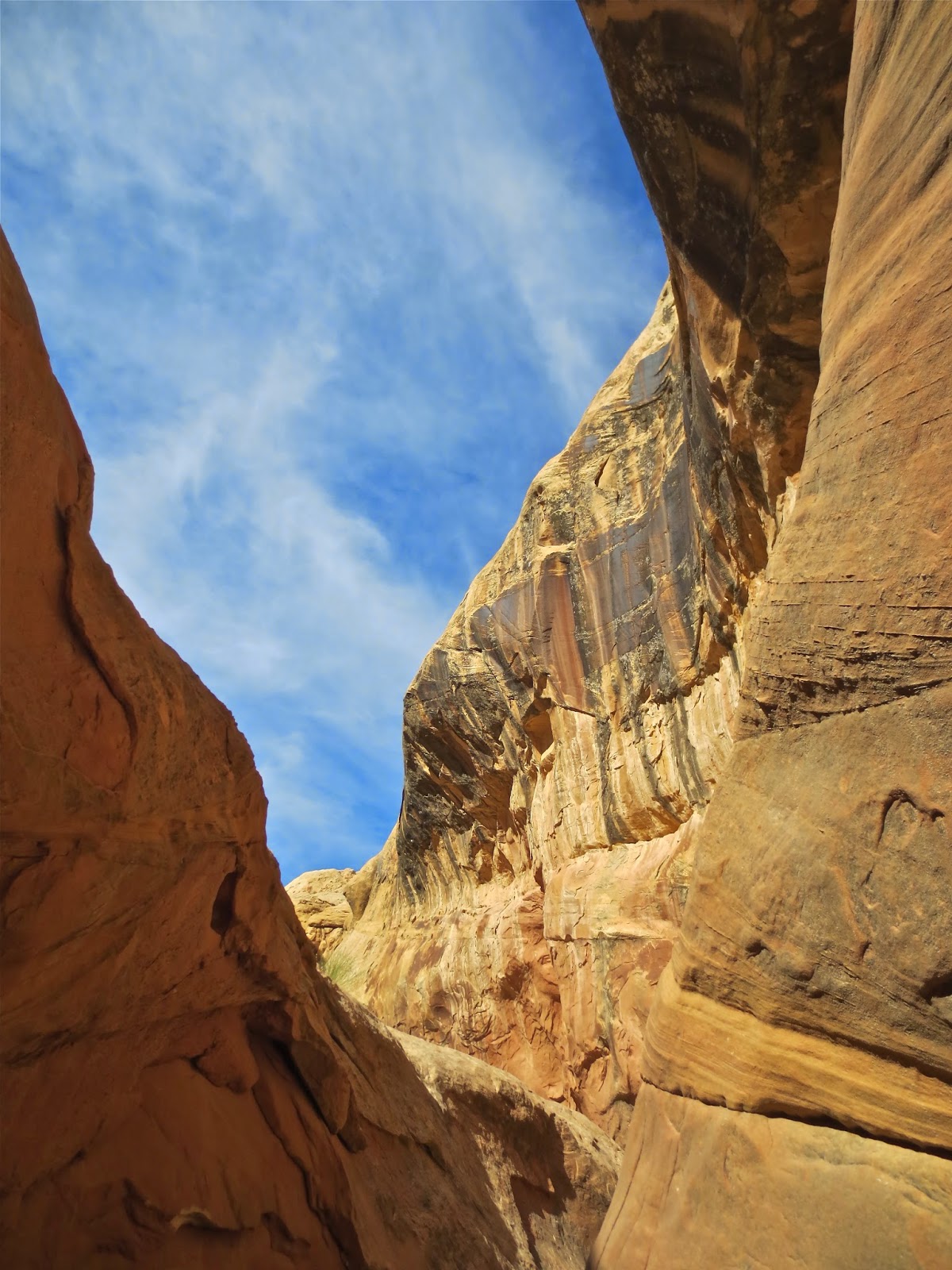 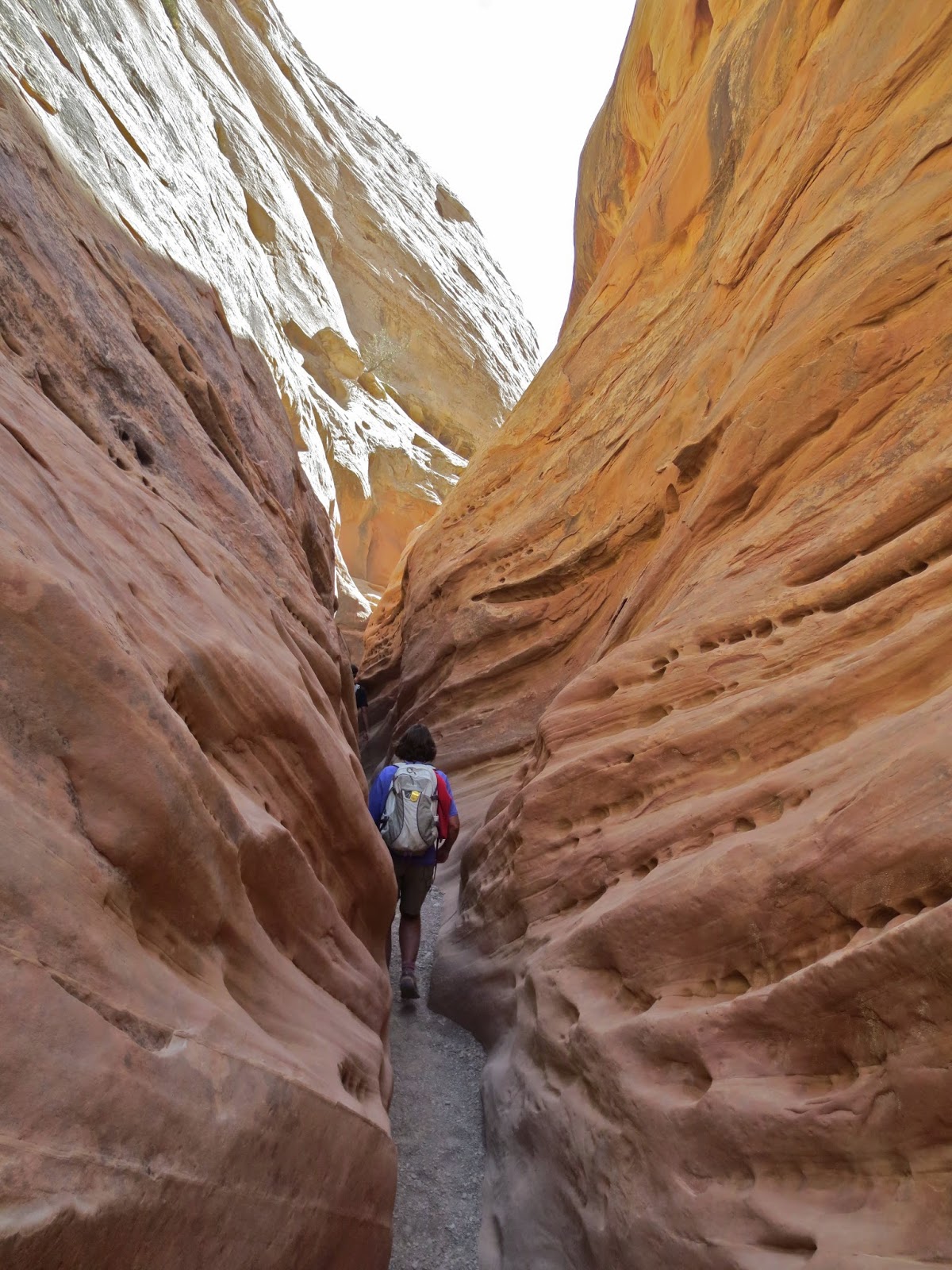 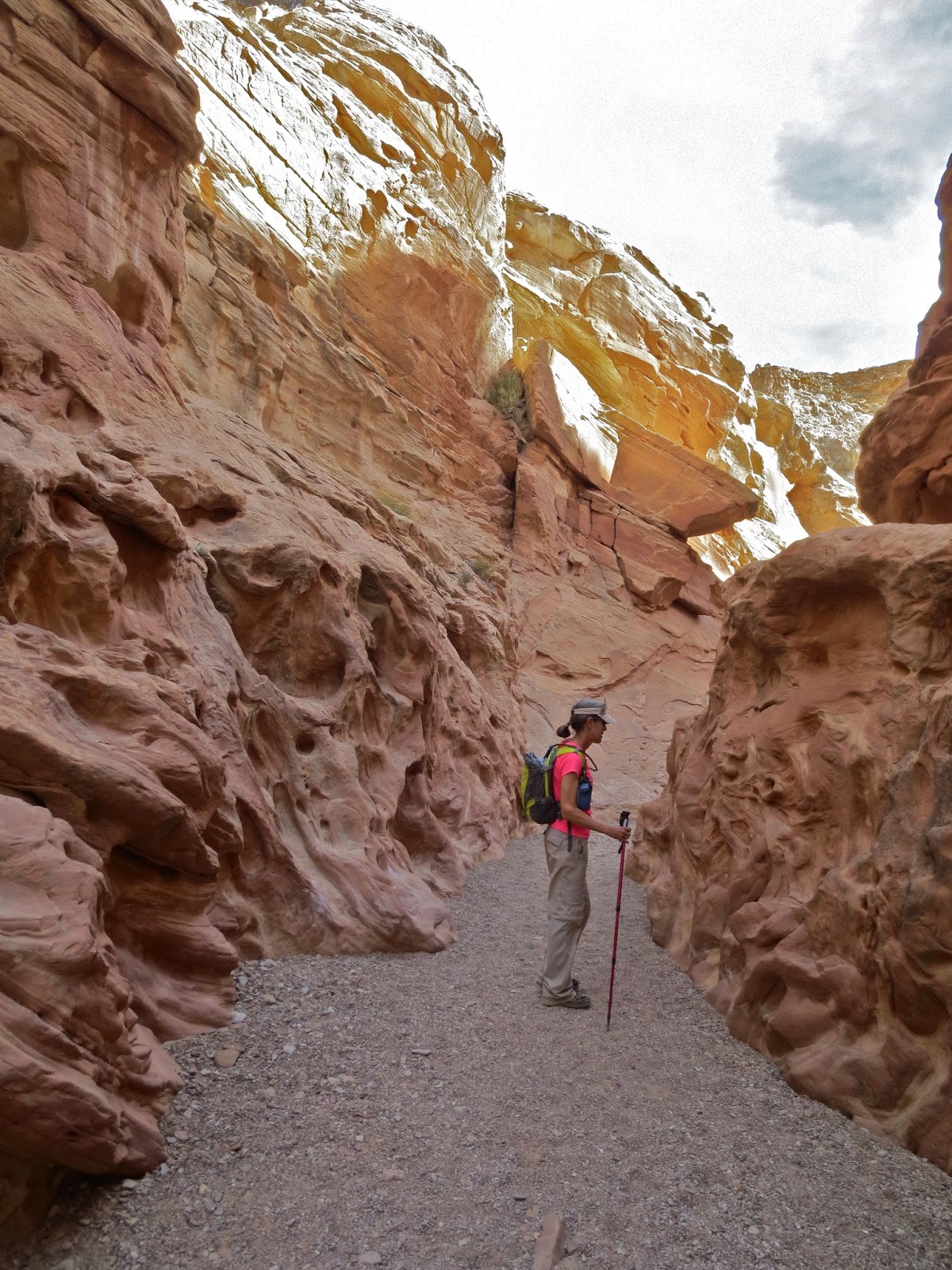 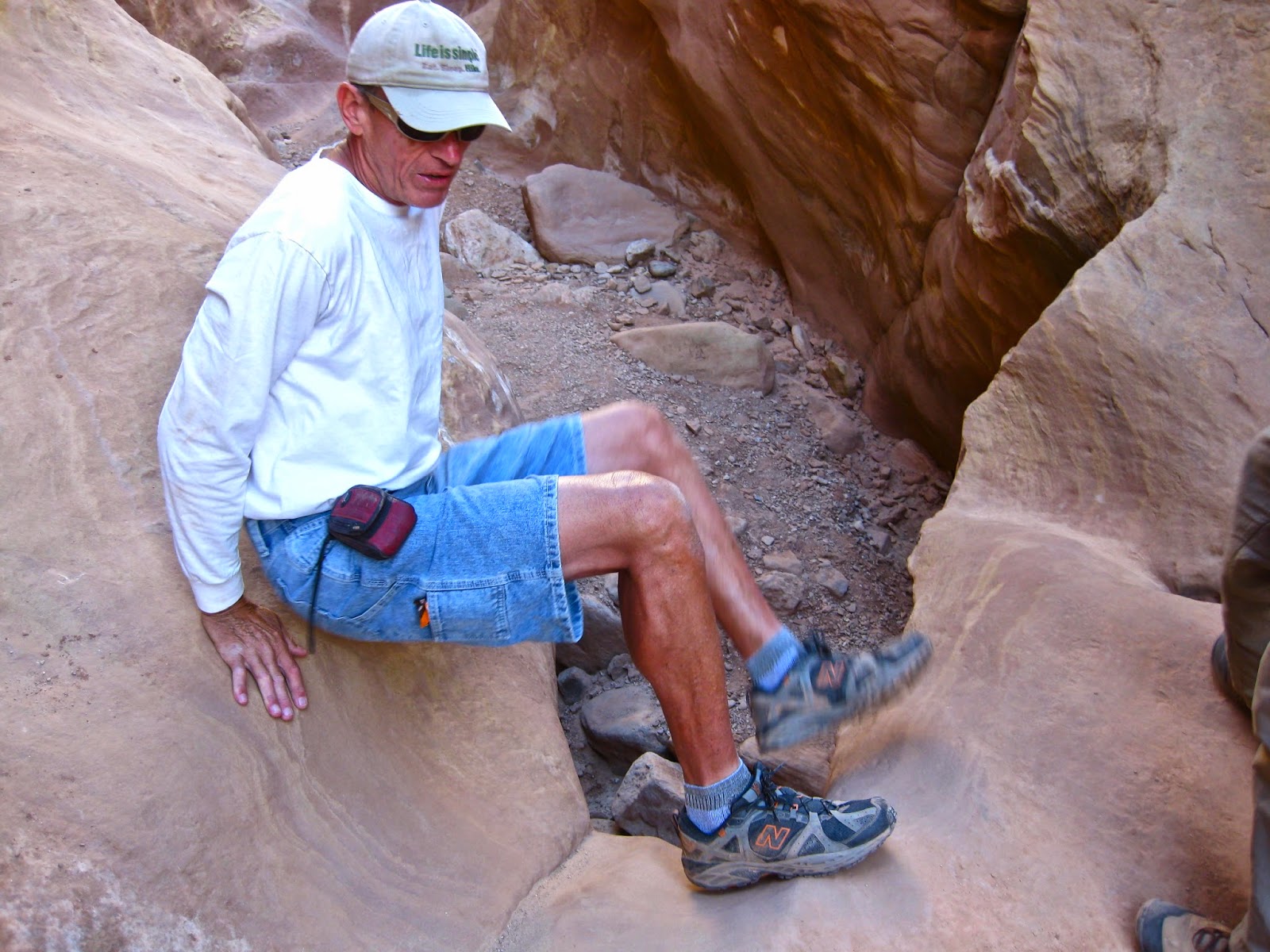 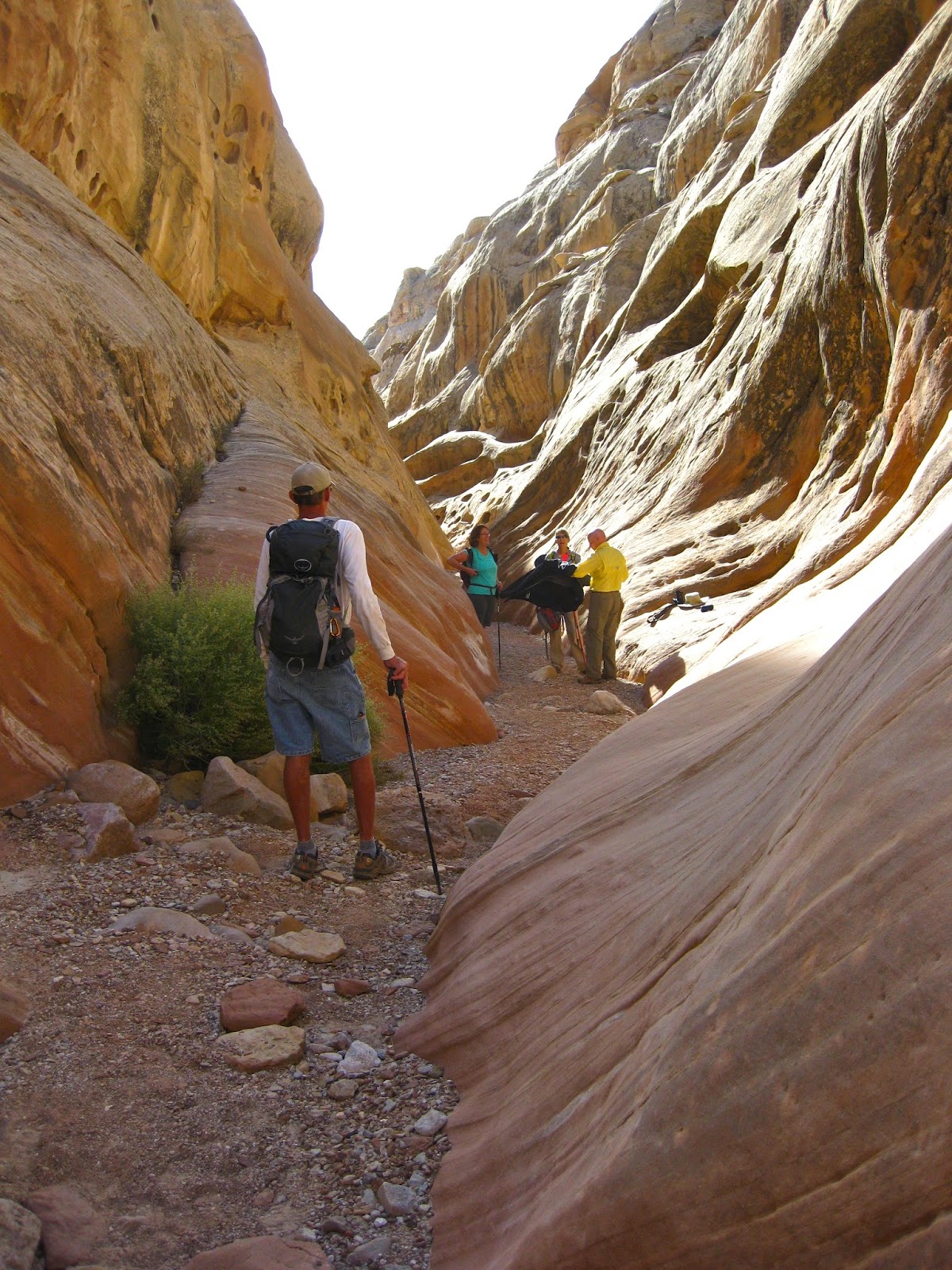 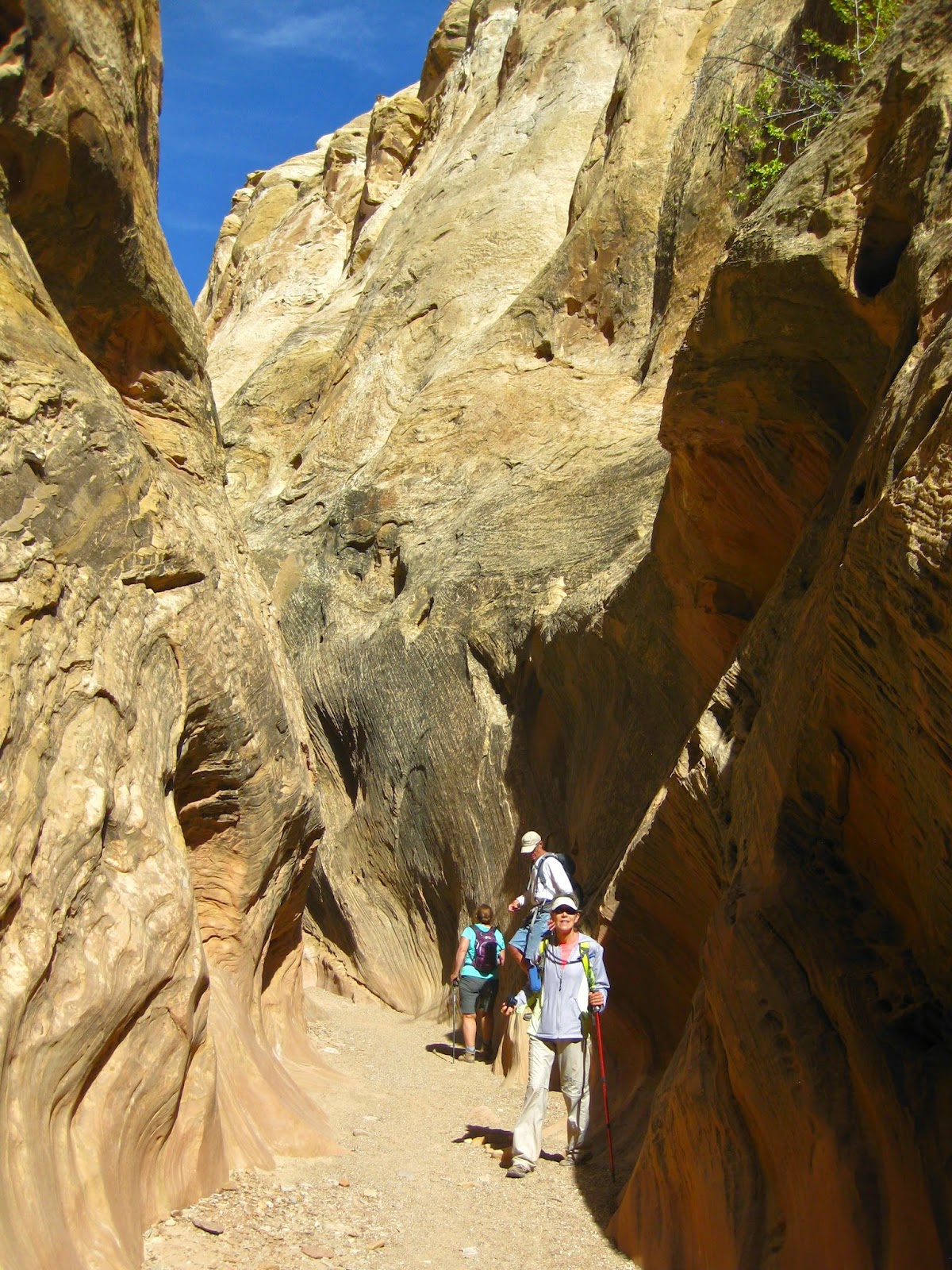 My advice to anyone going anywhere or doing anything in the Lovely State of Utah is to, first, bring your own beer, and second, check the official state calendar for surprise holidays that can spoil your solitude. Never do anything on a weekend; Tuesday through thursday is your best bet.

Being primarily made up of Mormons, Utah is definitely a family oriented state. I have no problems with that, nor religious prejudice against most denominations... except for the one's who encourage their "flock" to "be fruitful and multiply," or view contraception practices as a sin. I realize it's "Biblical" and all, but so was sacrificing virgins and first borns, and we don't do that anymore. Any one group having a shit-load of kids while everyone else is having 2 or 1 or none messes with demographics and population trends. Pretty soon you are a minority stranger in your own country. I guess if we go back far enough, we are all "immigrants."

I don't understand religious rules against contraception or the logic behind having 7 to 11 children. My dad grew up on a farm in Ohio, one of nine children. At least back then there was a reason for having a large family. It was kinda like creating your own labor force so you didn't have to do everything yourself.

But today? I mean, how much love do you need, people? What's wrong with stopping at one or two kids? Are you sure you have enough love in you to adequately smother each and every one of your 7 to 11 children? Can you afford to feed, clothe, and educate them? For God's sake, how will you remember the names or birthdays of (what's 7 to 11 times 7 to 11?) Lord… upwards of a gross of grandchildren?

When I was a senior in High School, Paul Ehrlich warned of imminent mass starvation and social upheaval in his book, The Population Bomb. Tho wildly premature in time frame, he still stood by his premise in 2009, saying, "perhaps the most serious flaw in "The Bomb" was that it was much too optimistic about the future." Sounds like he has a chip on his shoulder :0. He knows that eventually he will be proved right, and I can't say I disagree; it's only a matter of time.

In his well researched book, The Apocolyptic Planet, Craig Childs suggests the earth is at best nearing the tipping point of un-sustainability, if not already beyond it. The new wealth in Asia is creating a mass market for cars and disposable igadgets that further pollute and poison our planet, if not by exhaust, then by raping and pillaging for the raw materials to create them, sustain them, and satisfy an ever increasing demand for them.


What's the solution? I don't know. But certainly a place to start would be to adapt religious expectations to current reality. To preach moderation in all things, including procreation. It is immorally reckless, selfish, and self-serving to ignore the coming apocalypse… and that we may be the last generations able to change the destiny of those who come after we are gone.

Seeing a remote, little known natural wonder overrun with people was a wakeup call. Alarms were going off in my head... a lady's voice screamed, "Fire, Fire, Fire." I imagine that someday finding a secret lonely boondock will become impossible. It'll be just another crowded RV park, only without hookups.