Impatient at being forced to postpone our departure from The Frozen Tundra of Le Crevice, I resorted to pacing in front of the Imax... cursing softly through clenched teeth and a forced grin. No need to drag Bobbie along on another one of my "Dark Side of The Moon" excursions. The rendezvous with Goldie in Saint George, Utah, was on hold until the southwest thawed out from near record cold. Wednesday noon we hugged Marathon Man Leonard goodbye... yes, he was wearing shorts... determined to put Los Frios and winter the rearview mirror.

Utah was deserted... pallid as a corpse. Bastard Old Man Winter had squeezed the blood from red rocks, muting their cheerful glow... not unlike the way he muted my mood to the dark side. The landscape was discharged with bitter cold and layered with crusted, wind-blown snow. Misery loves company, so it was comforting to know Lovely Ouray was not singled out to suffer the press of the most brutal and prolonged snap of cold since WW II.

Utah felt bleak... blue-hazed through Sue Bee's filthy winter scummed windows. I might as well have been on a Trans-Siberian Train... bound for the infamous doom and gloom of salt mines. Utah, my warm and cherished landscape, had deserted me in a time of need... struck down with a ghastly pal of ice and snow. Sue Bee's monitor reported outside temperatures had bottomed out to zero degrees. A Radio Jock called it a stubborn "inversion." I called it something worse.

Green River, anemic on her best of days, was on life support. It felt like a morgue, and I, the coroner. Walking dead pop-bellied truckers... downing junk food and super sized Coke... jacking up on caffeine enough to kill a horse. God.

You probably know by now... my affliction with "mood," that filters in reverse, that is, from the outside in. I'm Visual, when I should be Visceral... and vice versa. It was going to be a long, introspective day behind the wheel. Those words from, "It's A Winter Thing," rung on the dark and angry side. But they were truth, and that should count for something. Most of the time I can smother "honesty" for the sake of a "perky" blog. But sometimes honesty overwhelms the "filters." Lest they clog and explode with the dialog of "life," a safety valve pops and suddenly there is a mess littering the pure white pages of the BCB.

I'm told these are the most powerful words on earth, and that they have magical dispositions. They hang by magnet on my mental refrigerator. "I'm sorry. Forgive me. I love you. Thank you." Use them someday when in a "bind" with "someone." Don't forget to speak them to yourself once in a while, too.

Sue Bee couldn't shake her built-up burden of ice and snow from home... just too damn cold. She heaved and pitched with every bump in the road. Add to her winter payload the weight of bikes, tools, food, books, and all the various and sundry shit one needs to lead a "simple" RV life on the road less traveled. I set the cruise-control for eighty one mph. It felt like we were barely moving... like slow motion. Radio choices dwindled as we plunged into the town-less quiet desolation of central Utah. Rush Limbaugh? or Hank Williams? This, and an "outside" temperature that struggled to get it's head above zero, subtracted from the usual joy and anticipation of an RV road trip. I prefer "addition" over "subtraction" any day. Living a subtractive life adds up to take aways, deducts, minuses, debits and docks. Another note for my "fridge."

It's maniacal... how an unchallenged moody mind goes straight to the gutter of "subtraction."  Being mechanical by nature (thank you/darn you, Dad), I am prone to wonder what thing(s) could go wrong with cars (and airplanes) with tons of miles on them... especially in unfriendly weather. For some reason I kept glancing at the instrument panel, waiting for a "Check Engine" light or some abnormal reading. As if to prove the power of "subtractive" thinking, Sue Bee's "Temp" gauge slowly began to drift out of its normal range... in the middle of freaking Nowhere. It occurred to me that the original equipment radiator and heater hoses should have been replaced long, long ago. Life, is about timing and diligence... and it never forgets to remind you of all the little things you thought you could let slide.

Maybe it's a fluke, so I asked Bobbie where the temp needle normally hangs out. "Dead center," she says. "Hummm, we're slightly over that and climbing. Doesn't make sense when it's zero outside." I slowed down, thinking maybe I was pushing the old girl (Sue Bee) too hard given the weight she's carrying. The needle hangs for a minute, but then creeps upward again. It's no fluke; Sue Bee's overheating on the coldest day ever in the middle of Nowhere.

I saw my dad do something in a similar situation back in Phoenix... the difference being that it was hot-as-blazes summertime when he did it. Our behemoth 1960 Oldsmobile 88 was overheating. Dad turned off the AC and told us to roll down our windows. He then turned the heater on full force, as if he'd lost his mind. The heater acted as another "radiator," and helped to dissipate heat. It got us to the next gas station.

With the heat and fan on the highest setting, Sue Bee's needle began to drop into the "normal" range, and we made it to Cedar City... where it was still zero degrees. I began to question whether we were ever going to escape The Old Man. It took a half gallon of antifreeze to satisfy Sue Bee's thirst.

Finally in Saint George, I punched a four digit code and watched as the storage gate opened... wondering if Goldie was ok, if she'd start, if anyone had broken in and stolen the generator and my prized Korg keyboard, left behind for lack of room in Sue Bee. What a sight for sore RV eyes. Even though it was chilly outside, I felt a release of "mood." Things began to "Add" up. Goldie started; It would get warmer; nothing was disturbed or missing; Sue Bee's leak was just a loose hose fitting; there was no snow within sight.

This was the beginning of a long journey without a destination, just a loose goal of meeting up with friends like Cowboy Brian, Boonie, Pen Pal Claudia and Marc, Scamps Eric and Maureen, Green Valley Sandie, Wiseone's, Susan and Maikel and who knows, maybe even make some new friends... go somewhere we've never gone. These "things" add up, then have a way of multiplying themselves! 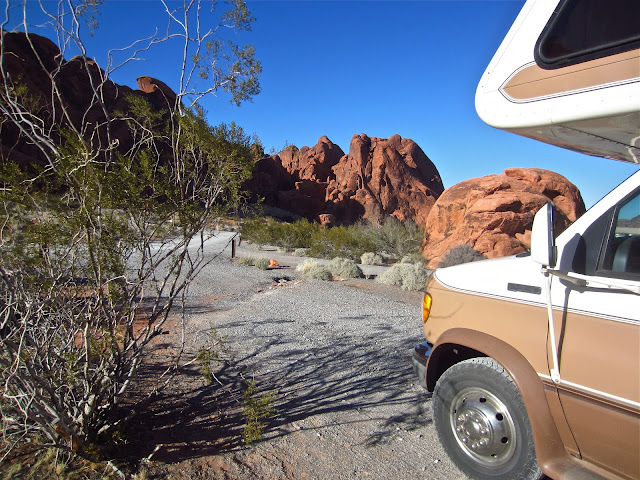