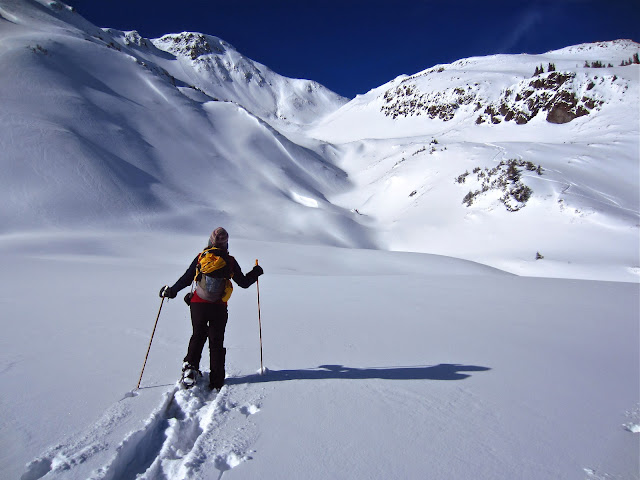 At 11,018 feet above sea level, Red Mountain Pass is a magnet... no matter the season. During wintertime, the scene pops... pure white linen sheets against a bedspread of cobalt skies. It's where Bobbie and I forsake Sue Bee in order to continue on foot, and rise above the congestion of timber "subways."

Forests have never been inherently appealing to me. I see them as shadowy places that obliterate the main reasons I journey to the high country, which is for its warmth of unfiltered sun... showering down, reflecting up... and the sheer soul-filling joy, energy, and panoramic spectacle. If I could not rise above "woods on snowy eve," approach the sun, see forever... fly without obstruction... I might as well live in Dodge City or Manhattan. 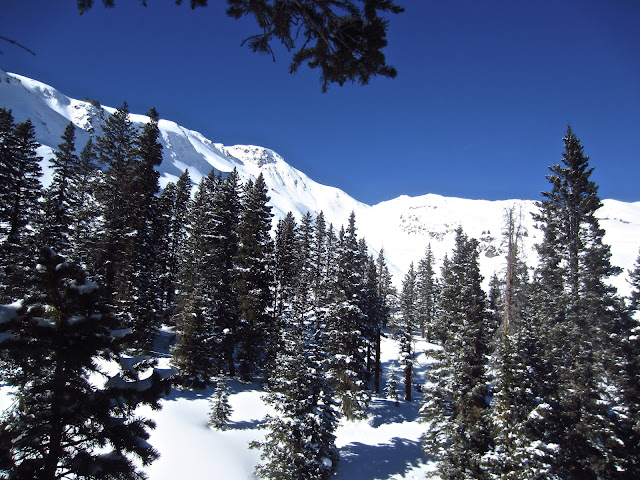 There are no chairlifts on Red Mountain. You must work for your ride the old fashioned way. 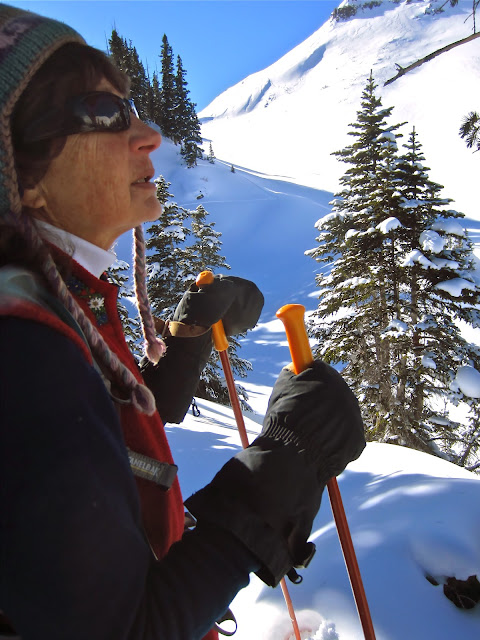 The calm is overwhelming, the quiet deafening. Awe shows in the face of my mountain girl. I see the "spectacle" reflected from her spectacles...  a polarized, solarized, and magnetized ridge line, toying with her fascination. But where there is Temptation and Seduction, there is Danger. 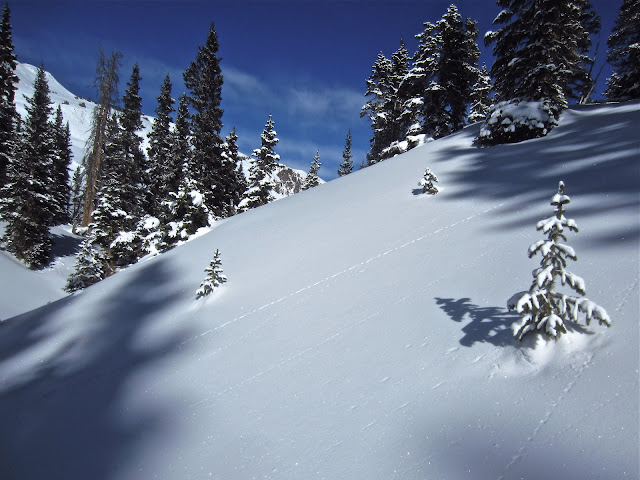 It feels like a sin to disturb the "sheets," the undulations of "blank canvas" so perfectly made-up by Mother Nature. 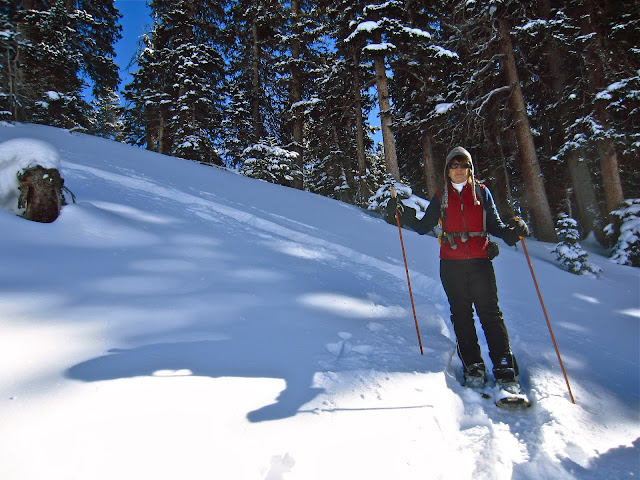 But like all "moms," Mother Nature will ungrudgingly make up our "bed," cover our tracks and clean up our "room." These "sheets" are but a "chalkboard," easily erased by the next storm. 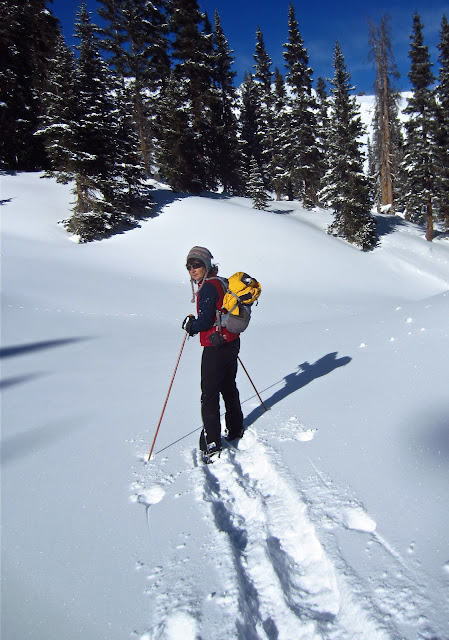 I'm told, "shadows don't lie." But this one doesn't seem truthful. I know Bobbie works hard in order to cast a slender shadow, but this shadow seems a little anorexic. 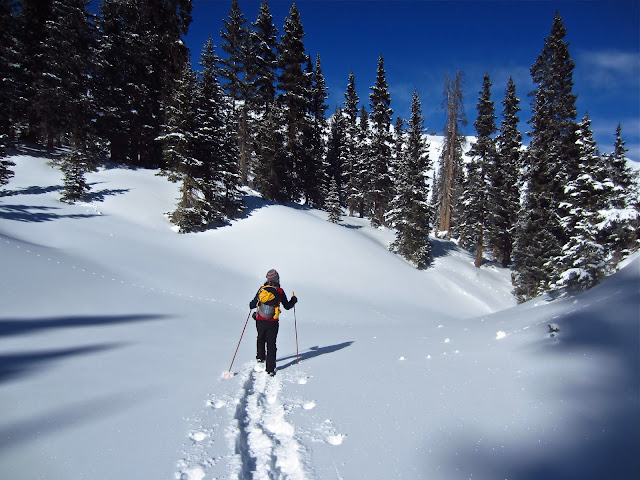 At the edge of timberline, some 12,000 feet, woods thin out and give way to the alpine zone. 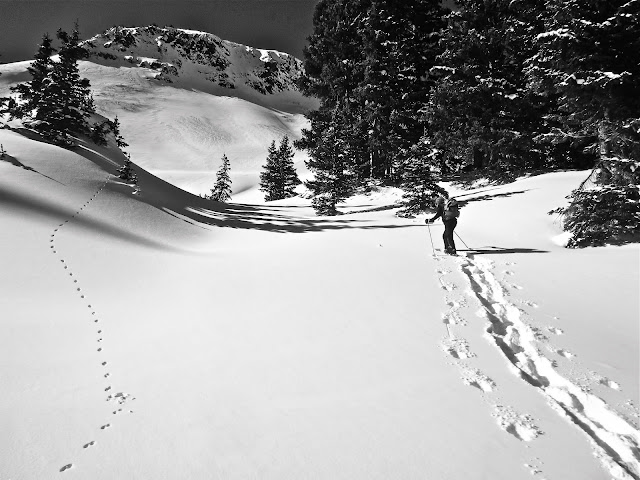 My favorite photo of the day. "Tracks." (above) 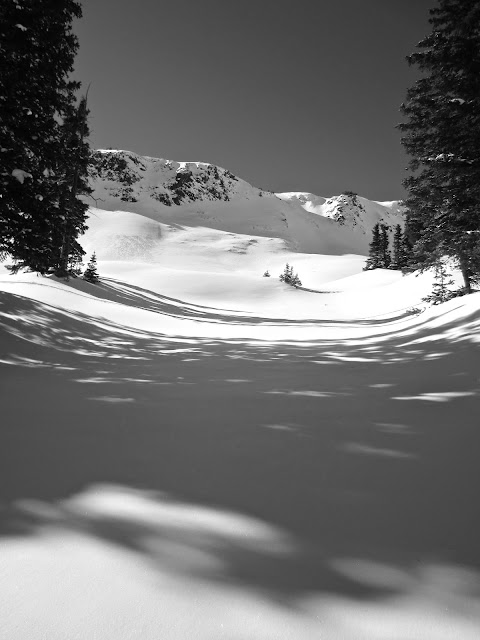 This is the aforementioned "danger" zone. When crossing an avalanche "chute," we do it one at a time, quickly... with a prayer on our lips. I feel like we exercise extreme caution with avalanche potential when adventuring into the high county during winter. There's enough snow above this crossing to "run," and avalanches can run at speeds up to 250 mph. But It's a narrow chute and we judged that it could be crossed quickly enough if triggered. Still, I felt like a big clumsy "bullseye" as I hustled across. 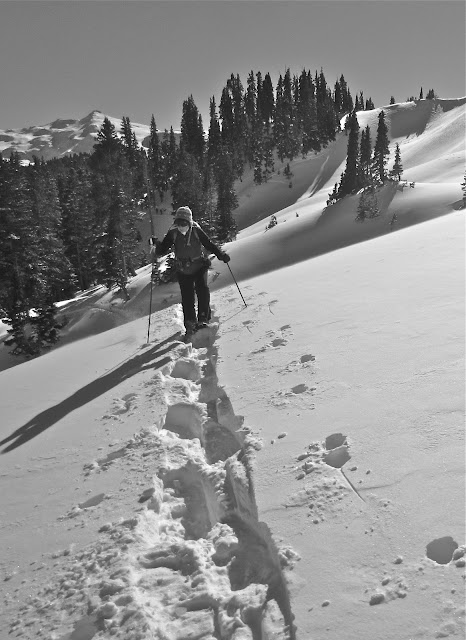 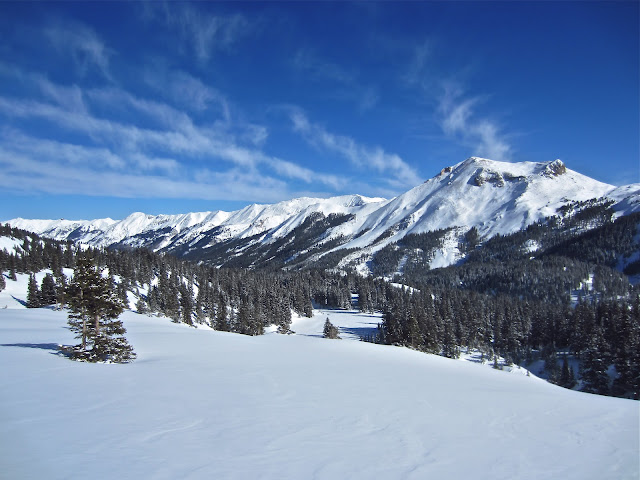 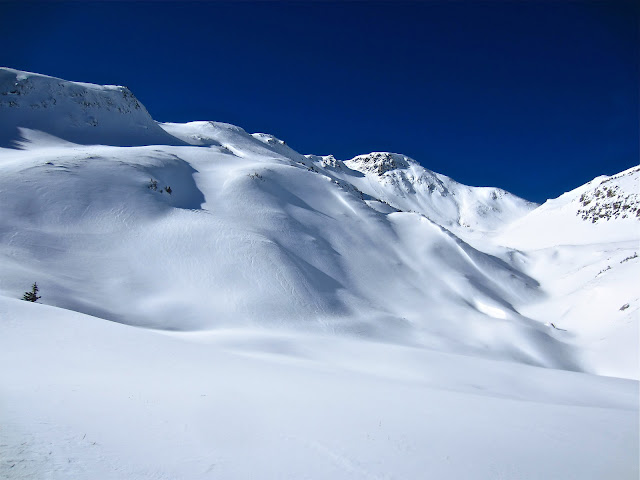 Someday I would love to witness an avalanche up close, but from a safe vantage point like this. There are avalanche runs all along The Million Dollar Highway to Red Mountain Pass. At some point after each heavy snowstorm, the highway department sends out a crew to stop traffic and then "trigger" them. They use a mortar like cannon to shoot rounds that explode upon impact. An avalanche is triggered and its payload runs itself out. Huge snowblowers chew away at the snow and debris where it crosses the highway. It can take hours if it's a big run, so always keep your gas tank topped off during winter. 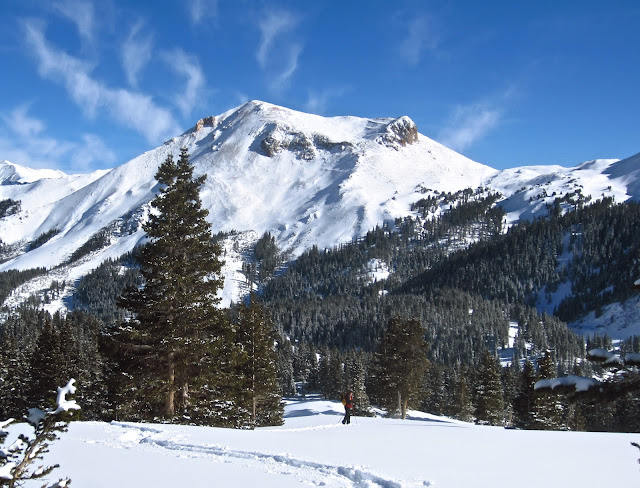 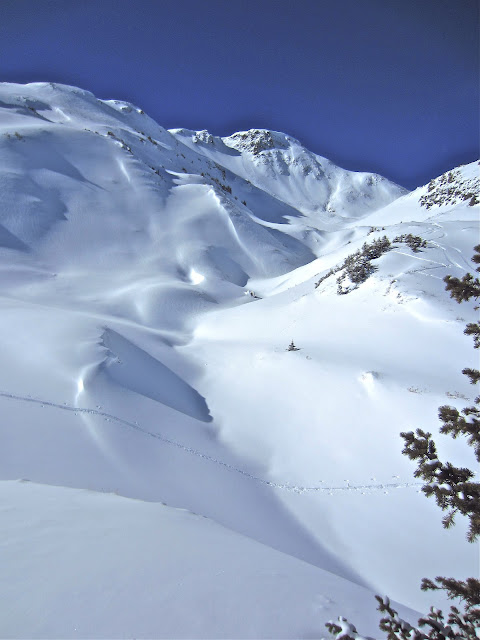 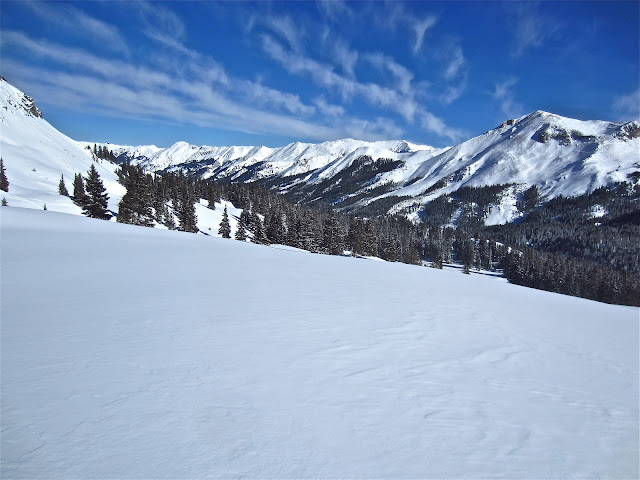 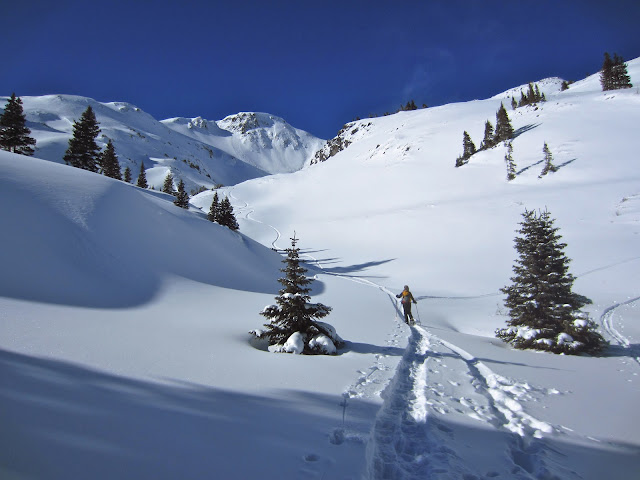 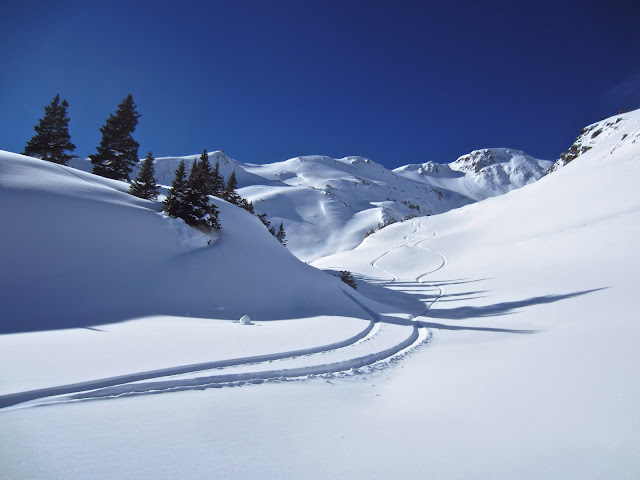 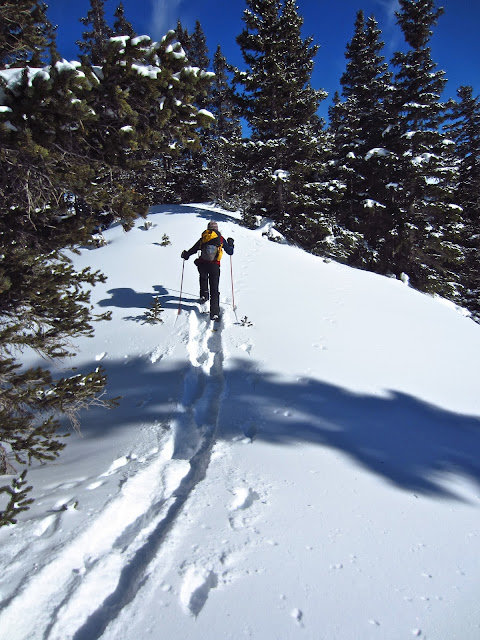 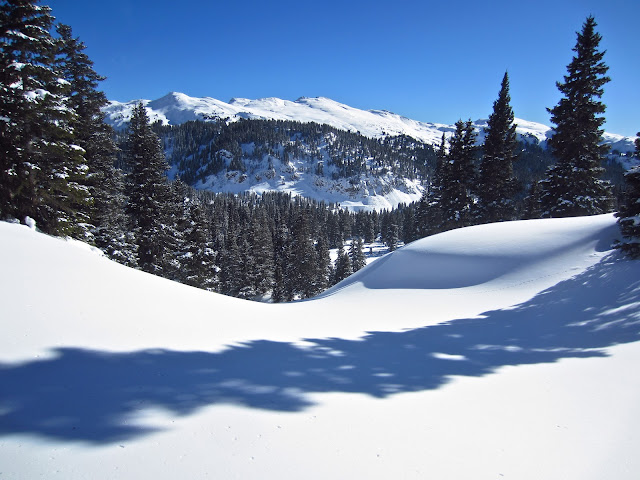 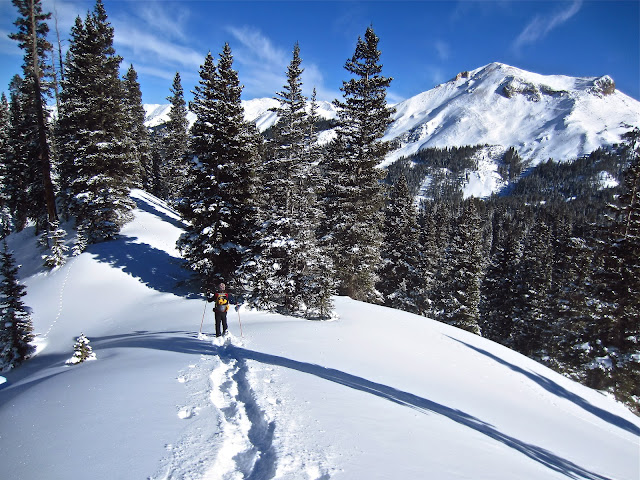 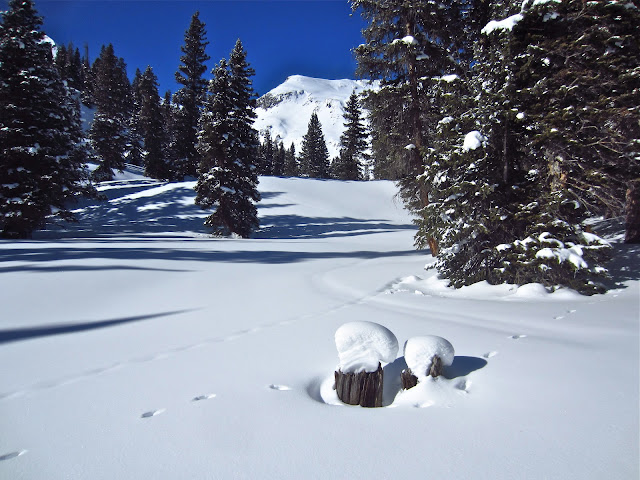 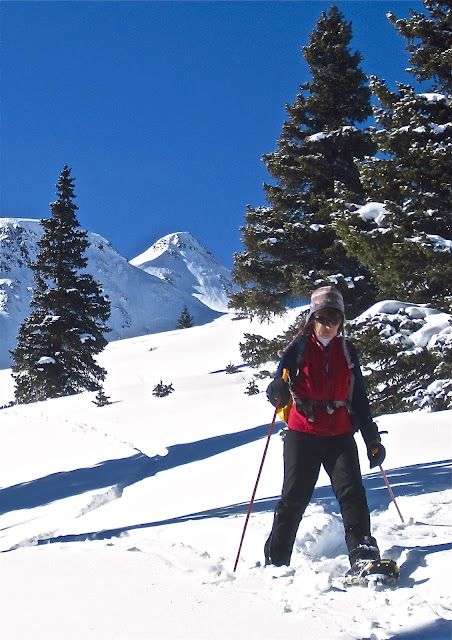 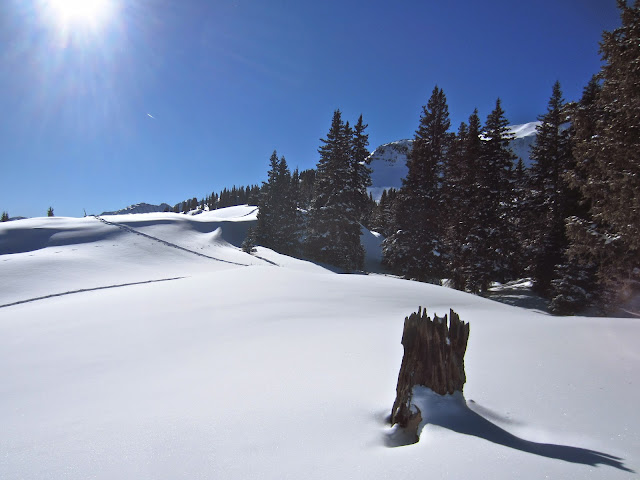 If you want to see a short video clip of avalanches in action, CLICK HERE.   Please note toward the end how avalanches can run uphill. You may think you are in a safe place, but the momentum from millions of tons of snow doesn't just go away at the bottom of a ravine. No, it carries up the other side of the mountain. FYI.
mark

Posted by Box Canyon Blog.com at 8:45 AM