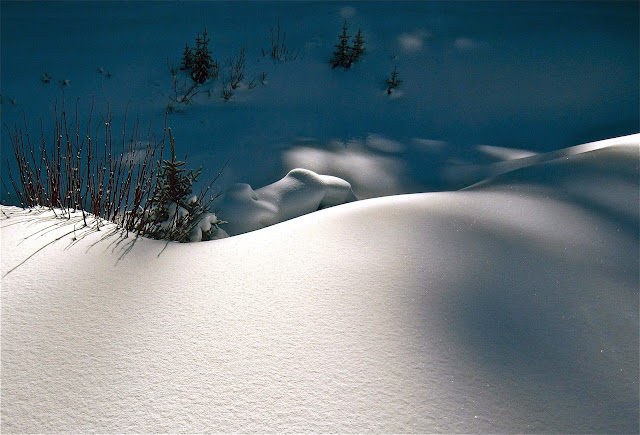 Another six inches of snow thursday night; it's really beginning to pile up now. This is the Lovely Ouray of old... foot upon foot of wondrous snow. Just when I was beginning to think Old Man Winter was growing old and tired of it all, he comes out of his coma with a vengeance in time for Christmas. Better late than never.

I realize most RV'ers shiver at the thought of snow and temperatures below 50 degrees. They scurry off to Sun Belt States like Florida, Texas, Arizona and So Cal every winter, avoiding one of the most beautiful, if not, misunderstood, seasons like the plague. I only "realize" this because I was you... until now, anyway. "Was?" What's with this "was" stuff? Oh boy; this might be a two-part post, and there won't be many, if any, converts, no matter how many times the choir sings Amazing Grace, or White Christmas. But I'm burdened to get this off my chest, so the least you can do is hear me out.

Thursday was forecasted to be cold and snowy, a good day to stay indoors near the hearth, right? But on the heels of five days of Christmas gluttony, and jeans that would no longer button without a struggle, I invoked Bobbie's Axiom: "Never stay home because of a weather forecast." In other words, "I am a man-boobed pig in need of exercise, come avalanche or deep snow."

Winter clouds drifted above town... snagging peaks and filtering precious morning sun. Sue Bee's tires squeaked along Lovely Ouray's deep-frozen back-streets. Northerners know it well, the sound rubber makes against packed powder snow at near zero degrees. Vibram soled boots make a similar sound as you walk; "squeak, squeak, squeak." The sound is often accompanied by frozen nose hairs, breath you can see, and sluggish lips that sound as if they've been shot up with novocaine... Pheeher Phiher phicked auh pheck auh phickled pheckers... or something like that.

Squeaking along, I suggested (as I always do) that we go somewhere we haven't been... someplace "exciting." Poor Bobbie, married to a typical male... obsessed with "new territory" and "drama." But she tolerates my "ways," actually supports "drama," to a point, and has a gifted memory for yet unexplored places. She recalled an obscure backroad near Red Mountain Pass, "County Road 31," she says, "On the last switchback before the Overlook." Voila, a road not taken in all the bygone years of our local mountain life. 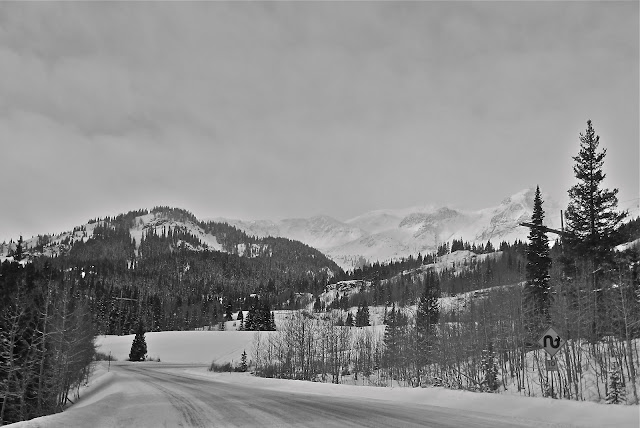 U. S. 550 south had been plowed, right down to the underlying sheet of ice. Mud/Snow rated tires don't squeak on icy roads. Rather, they "groan," due to grooves etched by truck tires with chains. Further up, 550 became snowy and fell into a silence... quiet as the night baby Jesus was born. Reaching 31, Sue Bee waded into a foot of shoulder snow like an Alaskan sled dog... both bred for snow and cold! We strapped on snowshoes and stepped into a winter wonderland of soft, deep, powder... tracking our way through a lonely, hushed forest. 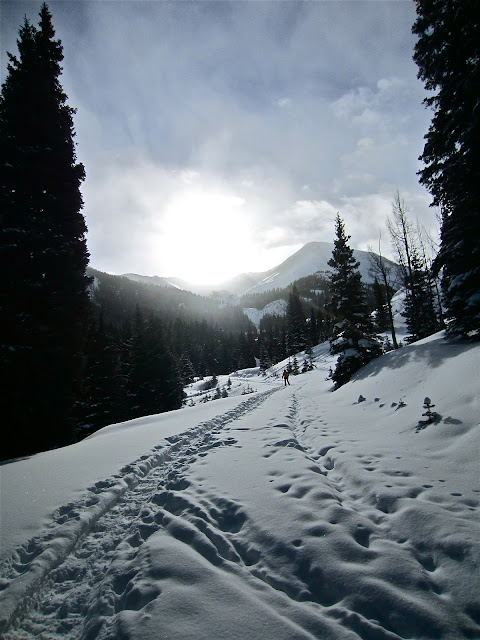 During wintertime, the air at ten thousand feet is both rarified and raw. It's edgy, cold, thin and dry... the kind that bites and tares like a junkyard dog at lungs too long indoors. It leaves one momentarily gasping... a raspy wheeze that brings the faint taste of blood. I felt a hundred years old... hacking up phlegm from a week's inactivity, limping from wednesday's interminable sitting marathon behind the wheel. Bones and tendons creaked like snow underfoot, and I sensed all the butter and gravy and other fine carnal-sin drippings of a proper Christmas dinner paving layer after layer of cholesterol in the arteries of my recalcitrant heart. I digress, as usual. 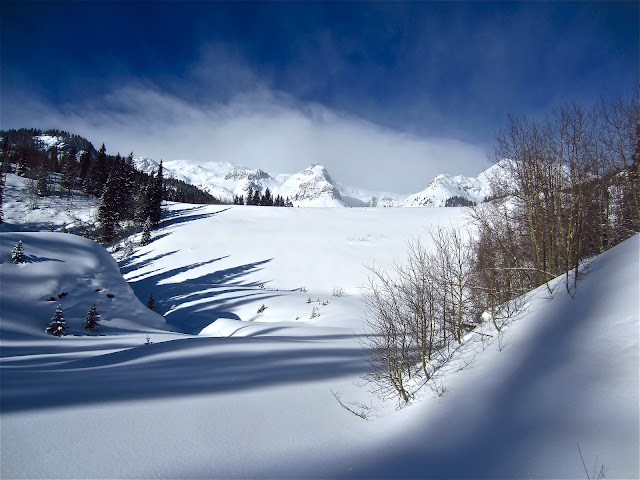 Here's my "rub," for what it's worth... tho I don't actually believe it will be of much value to escapists in the RV'er crowd. If there's one thing that can take my mind off winter, it's winter itself. Let me try to explain the "love/hate" relationship, starting with "Love." Imagine stepping into a classic Hallmark Christmas Card. It's a magical, serene place, where clouds cling to jaunty peaks, obscuring the prize like a negligee... a "wedding veil" tease for beholding eyes. Light dances, refracting from rolling mounds of glistening sugar-snow... reds, blues, and golds. 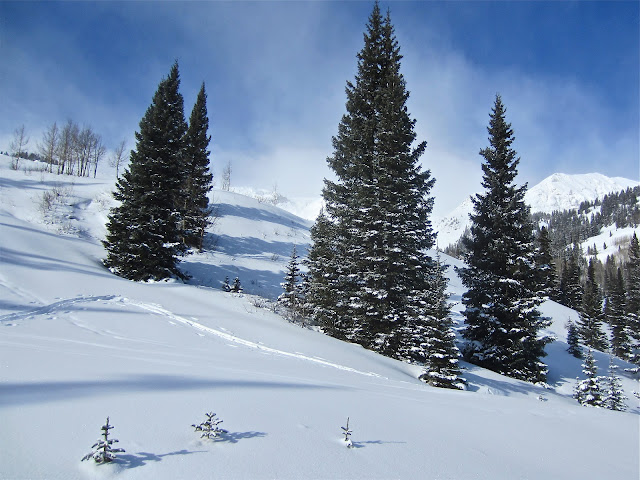 Imagine a calm, frigid place, where diseased exhales flash freeze into crystalline dust and fall dead to the ground; a place deserted of color excepting an intense cobalt dome... a place where intermittent stands of dark spruce cast about-face shadows, in opposition, refutation, and contradiction to and of, undulations of sunlit crystals of virgin snow. 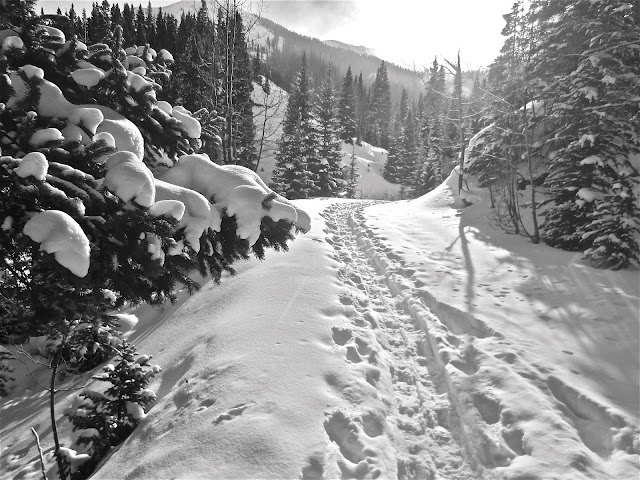 It's Ansel Adams-like in it's black and whiteness... white snow on bended bough that is all but drained of chlorophyl. That's what we had, and we had it to ourselves. Aloneness was the perfect "frosting" on our mountain. 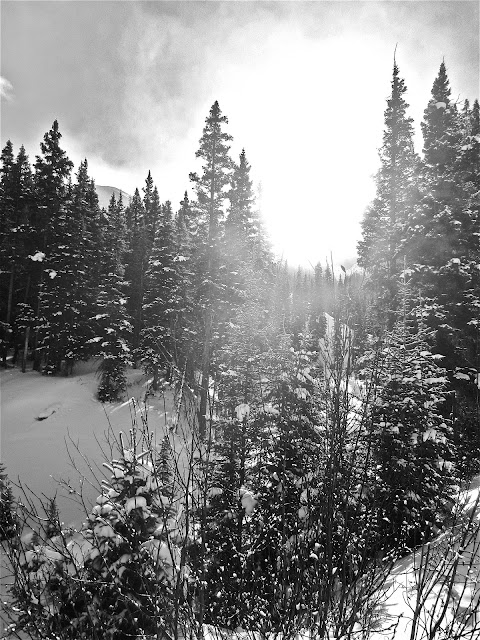 It might well seem like a contradiction, that a Hallmark Christmas Card could detain a surly old misplaced desert rat... one who despises long pants and the weight of clothes in general, not to mention homes without wheels... until the ides of January. I remember a time in my newbie RV life when I flirted with a blog theme... verily, a post retirement life-purpose... of an existence based solely on 70 degree weather, the kind that suited my clothes of preference. Yes, I would become a stalker of mild mannered weather, and lead an unassuming, albeit, shallow, roving lifestyle existence based purely on temperature. I would seek out like-minded groupies, form a mobil commune to watch the Weather Channel with, and at the end of the day we'd sit around in lawn chairs and say, "Man, how about this weather."

What happened? This? after I moved to Colorado for mountains and snow, and married a snow worshiping woman? 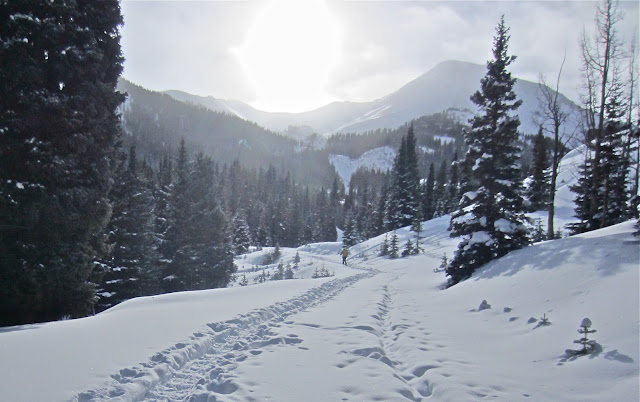 Where did that kid go... the one who loved skiing, the one who went sledding if there was but an inch of snow and a mole-hill, the one who abused his VW Bug, spinning endless donuts in parking lots after one of Missouri's infamous ice-storms? 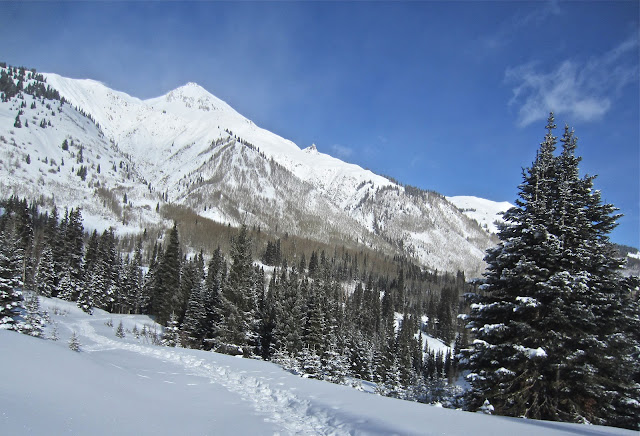 Why must one outgrow simple winter fun? Maybe it's because they can't afford it. Nowadays it involves trendy hi-tech name brand clothing, Salomon skis, Hang Ten snowboards and 15 dollars for a slope-side peanut butter and jelly sandwiche. Why not shuffle up a mountain on snowshoes instead of riding a lift? Why shed hard earned money when all we have to do is pack a lunch, drive up any old mountain road, and step out of the car.

Snow needn't become a bother as we age, especially in Colorado. We tend to forget how warm zero degrees can be when the sun is out... to the point that we shed clothes down to tee shirts from overheating. Why, when nearing the age of being forced by health and/or circumstances... when freedom is on the verge of meaning a wheelchair spin around the outdoor fountain at some "home," would we choose to stay indoors where air is stale, TV programming is a vapid wasteland (beyond football) and putter round and round when we could be walking a winter wonderland? We can sleep when we're dead, and staying indoors will only hasten that fateful day. 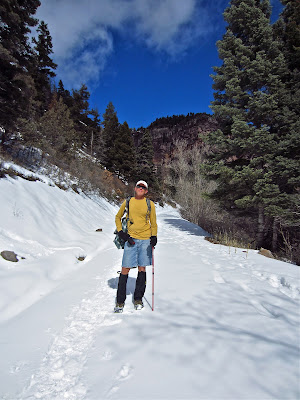 And so it was... at this point in my thought process, sifting through powdered sugar, breaking a virgin trail, switchbacking up to an old mining head-frame, that I declared an epiphany. 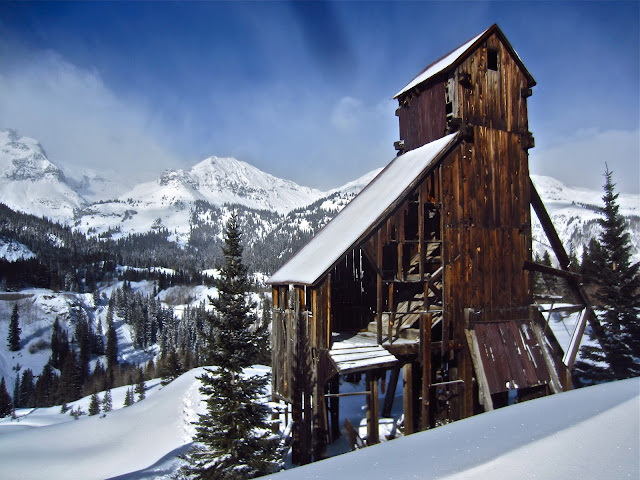 This is fun! I was having fun! And not only was it fun, it was good for my aging, decrepit body... in spite of it's objections... to push beyond reaching for the remote control and having a look-see at what's in the fridge. Blood infused brain; it made me feel alive. Striking out on a winter's day elevated mood, from from the doldrums of routine in an otherwise drama-less existence, to alive and thankful. Winter, in measured amounts (it wasn't a complete conversion) should not be avoided like something that's bad for you. Why shun cold 24/7/365 ? Why not "balance" a Sun Belt winter lifestyle with occasional mountaintops, thin air, and playing in the snow? Maybe I don't belong on skis or a snowboard anymore but I can still strap on a pair of snowshoes, layer up, if need be, and walk.  If it elevates my spirit and body... restores my soul... clears my mind of rubbish. Not only should I do it, I need to do it. 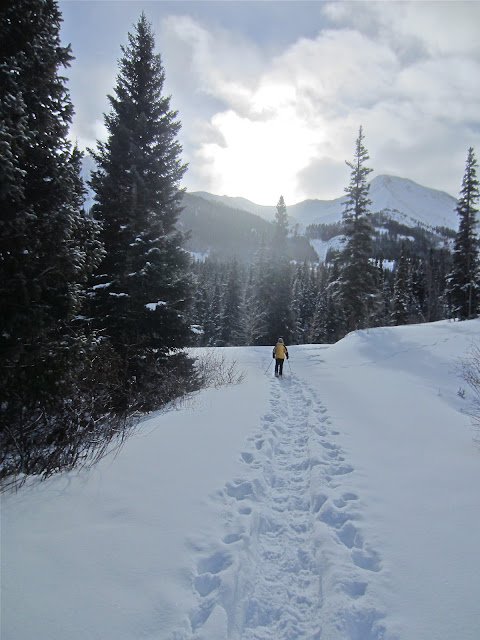 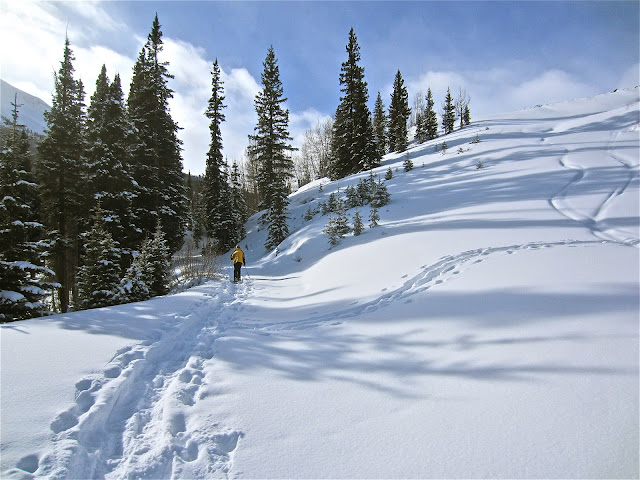 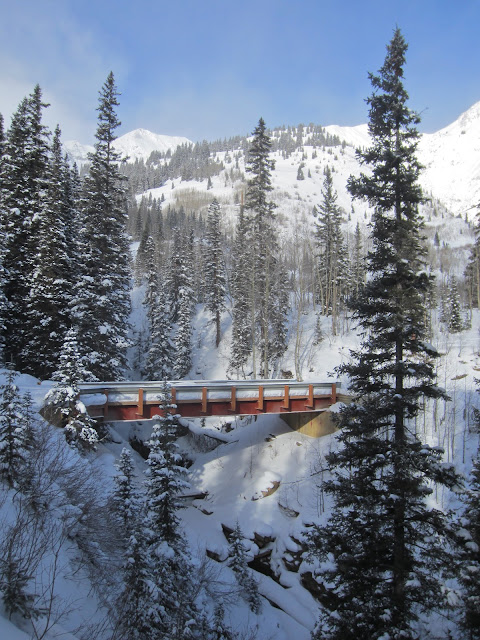 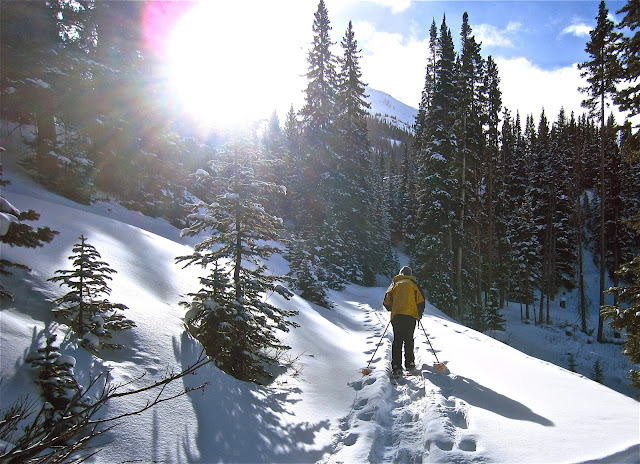 With maybe the exception of Florida, RV'ers can, if they want—need—should, taste of winter's delights. Arizona's RV belt is but a short drive from snow... I give you San Francisco Peaks, White, Lemon, and Wrightson, as example mountains. For real drama, one could, in less than a day's drive, be in Lovely Ouray or some similar place. Go on a "holiday" from the "rig." Break routine... better yet, smash it to pieces once in a while during winter. Go check out Ansel Adams black and whites and a little Cold Play. Put on a coat and go walk Lovely Ouray, or Prescott's old town, maybe buy a plastic sled and scoot down a mole-hill. 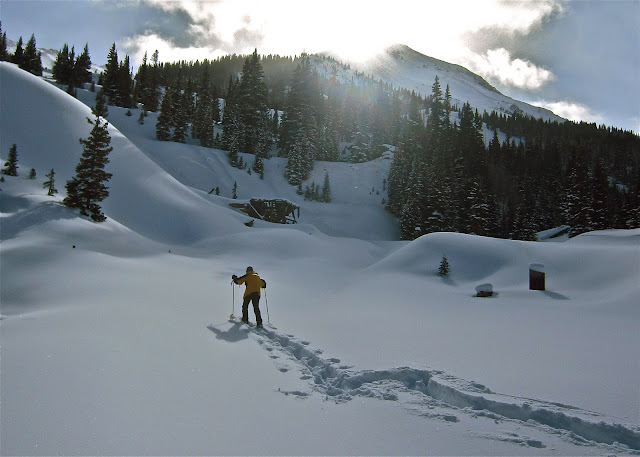 Admittedly, there are limits to my tolerance for long winters in places like Lovely Ouray. But it's not so much the cold and snow as it is the freaking lack of sunlight. And there is nothing I can do about that.

Have a great Football Sunday! or "Whatever"
Mark and "Snow White"
Posted by Box Canyon Blog.com at 11:52 AM