The plan was to gradually add distance and elevation as our RV hiking group became acclimated, saving the best hike for last. But "plans" are like RV curse words to footloose vagabonds; "Here today, gone tomorrow." Dang, I ended up saving the best eye candy a little bit too long. Scamps, and Jim and Gayle departed The Crevice a few days ago, along with Debbie and Wonder Dog Elliot. John Q is long gone, now hanging near Crested Butte and dreading the long flatland drive home to Indiana. I guess the sweetest hike will have to wait till next year for you guys. But not for us.

We are down to Boonie and Marathon Man, Leonard, for potential hike-mates. Having just come off a taxing hike to Upper Cascade Falls the day before, Boonie had a preference to do something local and shorter for his last hike. He departs The Crevice on Thursday. I wanted to blackmail him with the promise of "eye candy," but realized that would be futile and let him go his own way (sigh). It was down to Bobbie, Leonard and me. I told Leonard to not bother wearing any socks on this hike because the "pretties" would just knock them off.


There is a story to go along with the Ice Lake hike. Meet Kathy, and her little dog Maggie.


First I met Kathy's Dog, Maggie, tripping along the trail down from Ice Lake. I was grunting out the final hundred yards up... huffing like a two pack smoker, puffing like a steam engine, and sweating like Lucifer. I think I frightened the poor little dog; it stopped dead in its tracks and waited for reinforcements. Kathy eventually caught up and struck a conversation, remarking how beautiful the day was and so, too, this garden basin.


Kathy mentioned that she and her husband winter in southern New Mexico but come to Colorado to "summer" and camp host at various campgrounds in the area. "A great life," she mused, then blurted, "It's my sixty eighth birthday today, you know." Maggie was glued to my boot, sniffing God-knows what scent. I congratulated Kathy on her birthday, and her wise choice on how to celebrate it.


She told me she had been hiking to Ice Lake for five years, because it was the most beautiful place on earth. "And," she continued, "this is my 68th hike in that five years!" Wow, 68 pilgrimages to Ice Lakes in five years, and number 68 on her sixty eighth birthday. But wait, there's more!


It turns out Kathy has had, not one, not two, but three hip replacements. The doctor told her to forget about hiking to Ice Lake when a tumor forced a third hip replacement. She told me she looked that doctor in the eye and said, "Don't tell me I can't do something or else I'm bound to do it just to prove you wrong." Evidently she is doing just that. I told her she was an inspiration... a good example for others to follow.


I think there is something we boomers can learn from Kathy... her refusal to allow life's challenges to shorten her "leash." It's going to take more than a measly tumor and three hip replacements to reign her in to the Lazy Boy. I offered to meet her at Ice Lake on her next birthday and help her celebrate. It seemed to touch her, so I intend to make good on that promise. She deserves it.


You might say Ice Lake is solar powered; it needs sunlight to electrify its blue neon light. Without sun it's just like any ordinary lake in an eye catching basin. Our sun hid behind a stubborn cloud as we arrived upon what appeared to be a dull lake. I'm sure Leonard wondered at my big build up. His socks were still in place. Then, ever so slowly, the cloud moved along, taking its ground shadow with it. It was as if someone had their hand on a dimmer switch and was cranking up the juice. Ice Lake began to shimmer and glow with all the luminosity of a transparent turquoise gemstone. Jaws dropped; hearts soared; "Oh my's" tumbled from lips... reality questioned; eyes teared; atheists knelt. I looked at Leonard, waiting for the impact... three, two, one— "This can't be real!" He slumped down on a rock and began removing his socks.


You see, the thing about Leonard is he can't resist a good cold-plunge. He ignored my warning, that there was a damn good reason this sky blue water was named Ice Lake. But no, he wouldn't listen. Next thing I know he's stripped down to his skivvies and wading in... deeper, deeper, deeper... until he was standing on the edge of a submerged ledge. Waist deep in a Hamms beer commercial, studying the aqua blue abyss, he deliberated for a moment. Then, Geronimo... he dove in, a squiggly cartoon figure under the surface. His reemergence was marked with gasps and squeals of either delight, or pain. "Yahoo!"
Crazy... just, crazy.


In the face of eye to eye coercion, double dog Texan dares, and intimations about my Manhood... or lack thereof... I held firm to my convictions and common sense, and did not set so much as a little toe in Ice Lake.
Because it would have killed me. 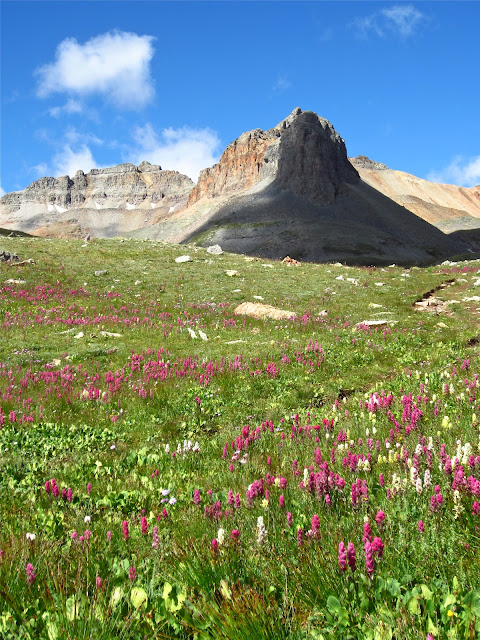 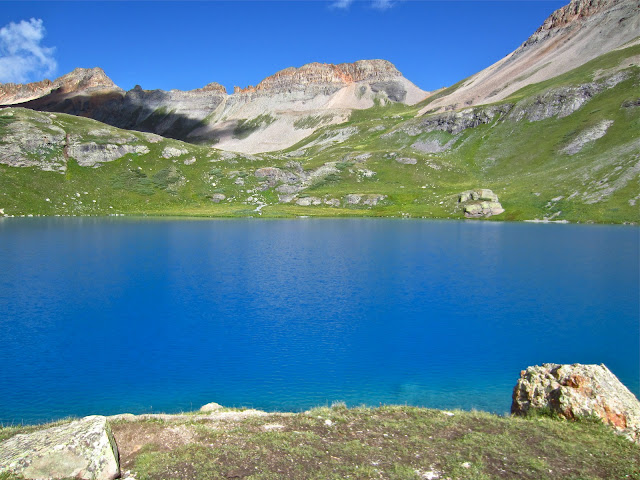 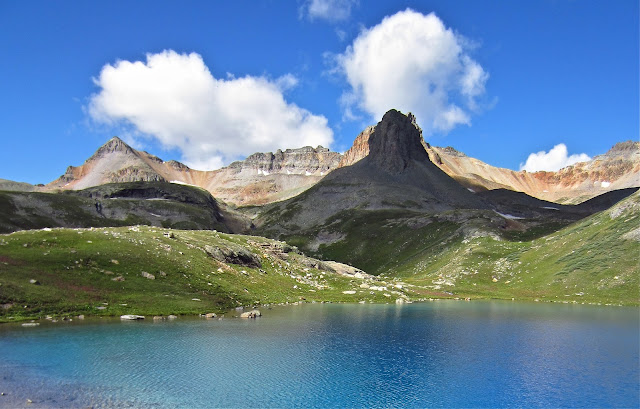 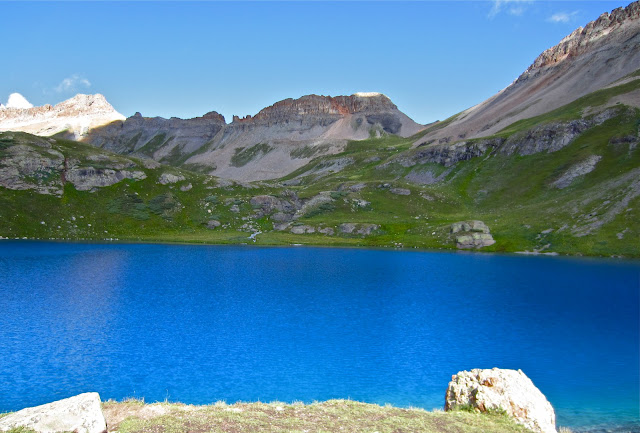 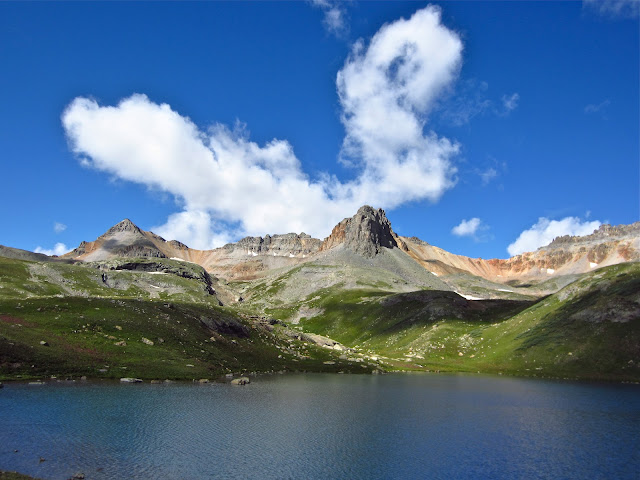 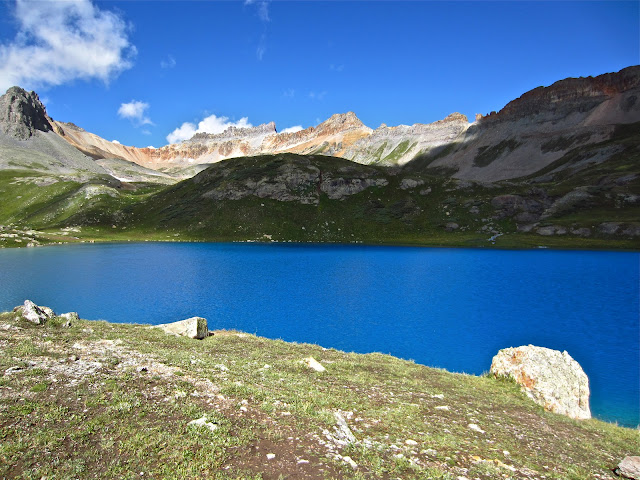 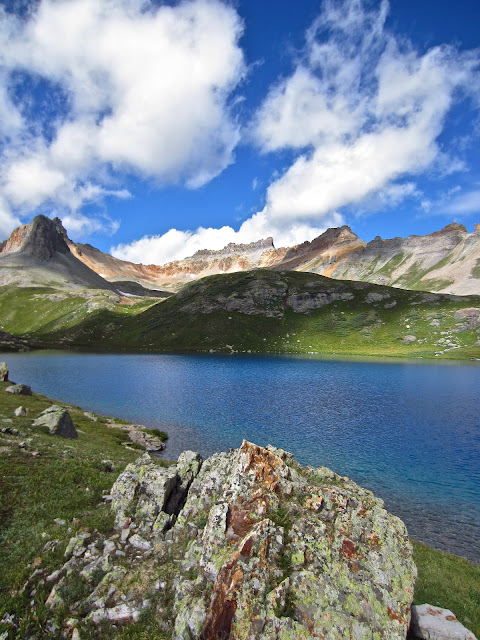 Check back for the Ice Lakes video...
and more photos of our hike.

And a special thanks to Chris and Mindy
for taking us out to the Western Hotel
and feeding us
Pizza and Beer!
Posted by Box Canyon Blog.com at 4:37 PM