Getting High On Corkscrew "Wine," and Our Trash Marauding Bear 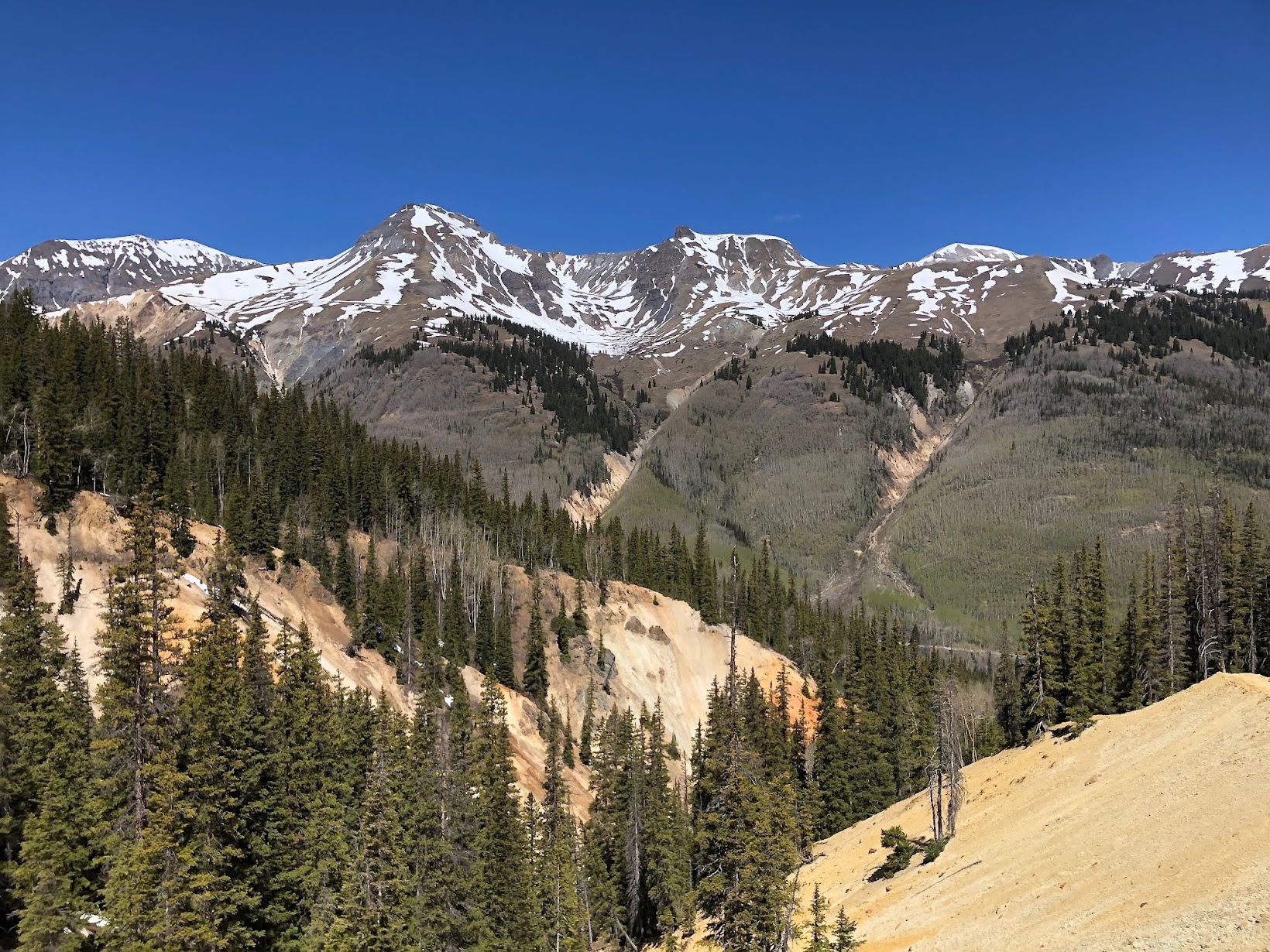 Unless you happen to love post-holeing through knee to hip deep snow, hiking above timberline this time of year generally requires "equipment," things like snowshoes, gators, crampons...backcountry skis. We seldom prepare for lingering spring snow, thinking we'll just figure it out as we go...which usually translates to, if the "draw" is strong enough we'll just post-hole...end up with bloody shins from ice-shards, heavy soggy shoes, and frozen toes. But post-holing is not as much fun as it used to be. Nowadays, we try to minimized it to once a year. Fortunately, there's a solution around Lovely Ouray for hiking above timberline during spring's prolonged meltdown.

Every May Ouray and adjoining counties San Juan and San Miguel begin bulldozing backcountry Jeep roads for the summer Jeeping season. Not plowing high country roads would effectively put off the Jeeping season till mid July at best, and some routes like Imogene Pass, would be closed all summer. Thus, plowing allows for a longer tourist season and more income for Main Street businesses as well as City coffers for Tax Revenue.  Cha-Ching! 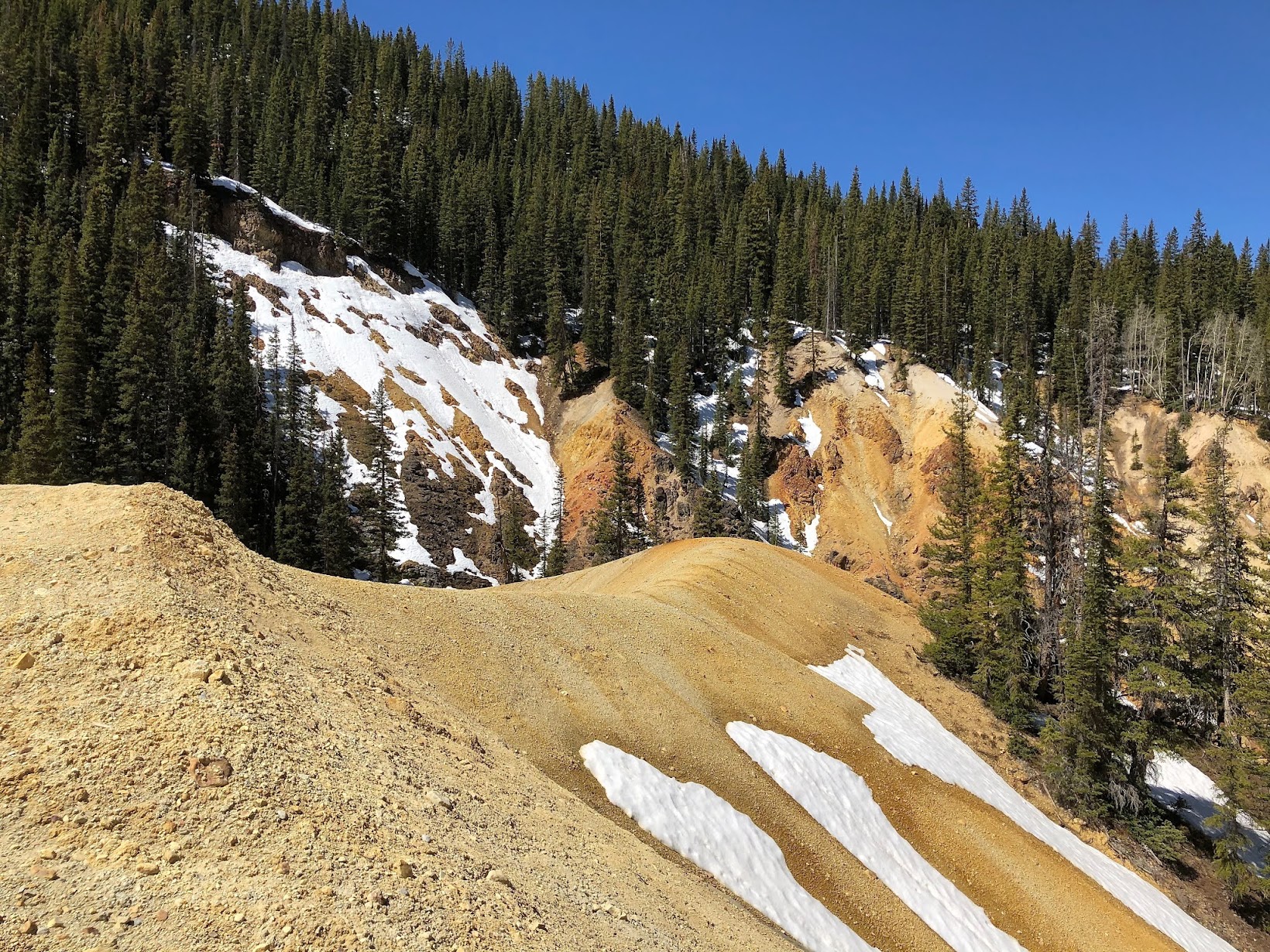 So, for a few weeks anyway—while the high passes are being plowed—hikers can make use of yet to open Jeep roads with little to no traffic. Since most Jeep Roads wander over mountain passes, we have a non-post-holeing ticket to our favorite playgrounds above timberline.

Corkscrew is one of our favorites because its route wanders through dazzling Red Mountains. So come along, join Ruthie, Bobbie and Yours Truly as we head up Corkscrew on a gorgeous, colorful, Colorado day... 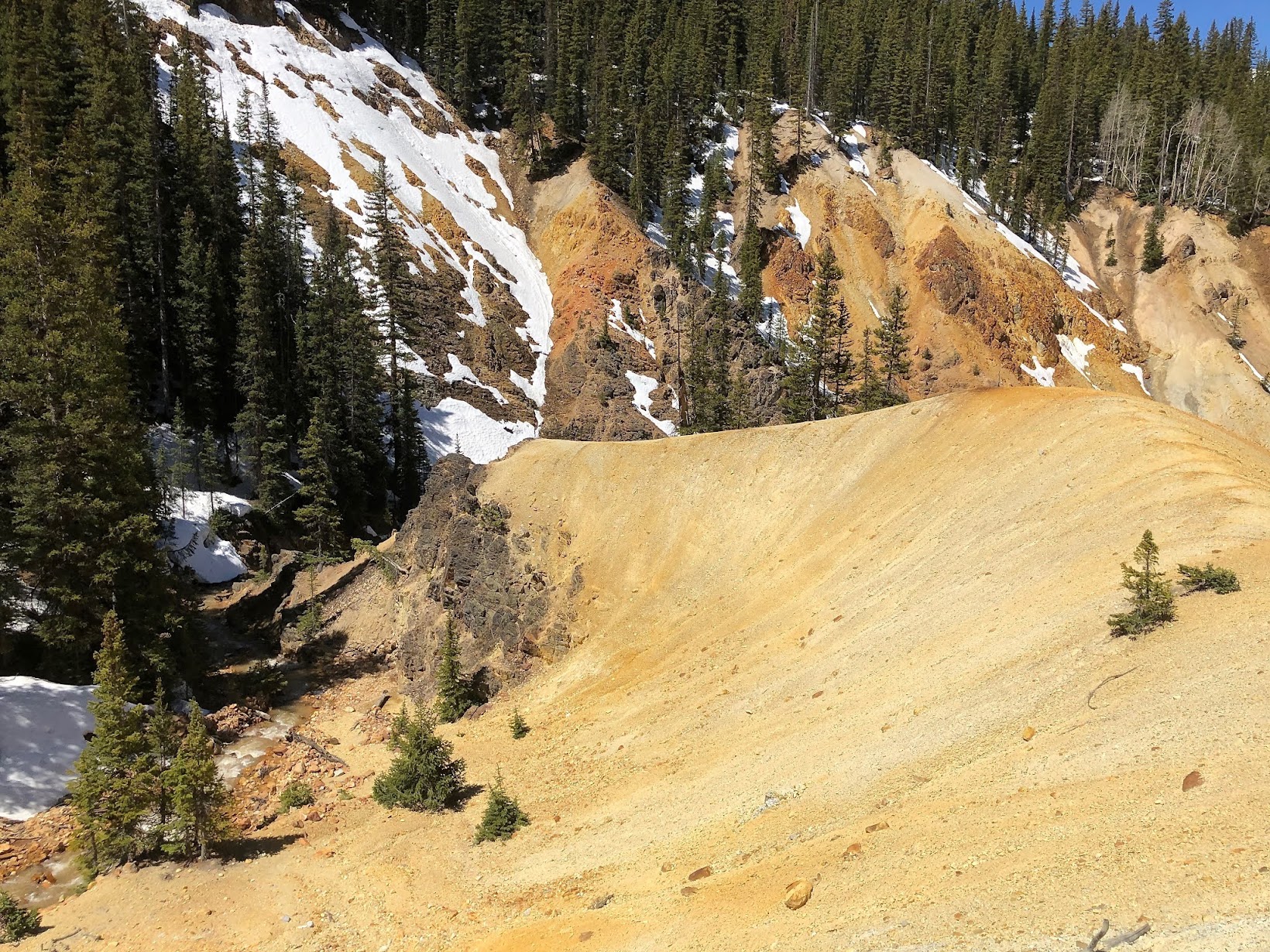 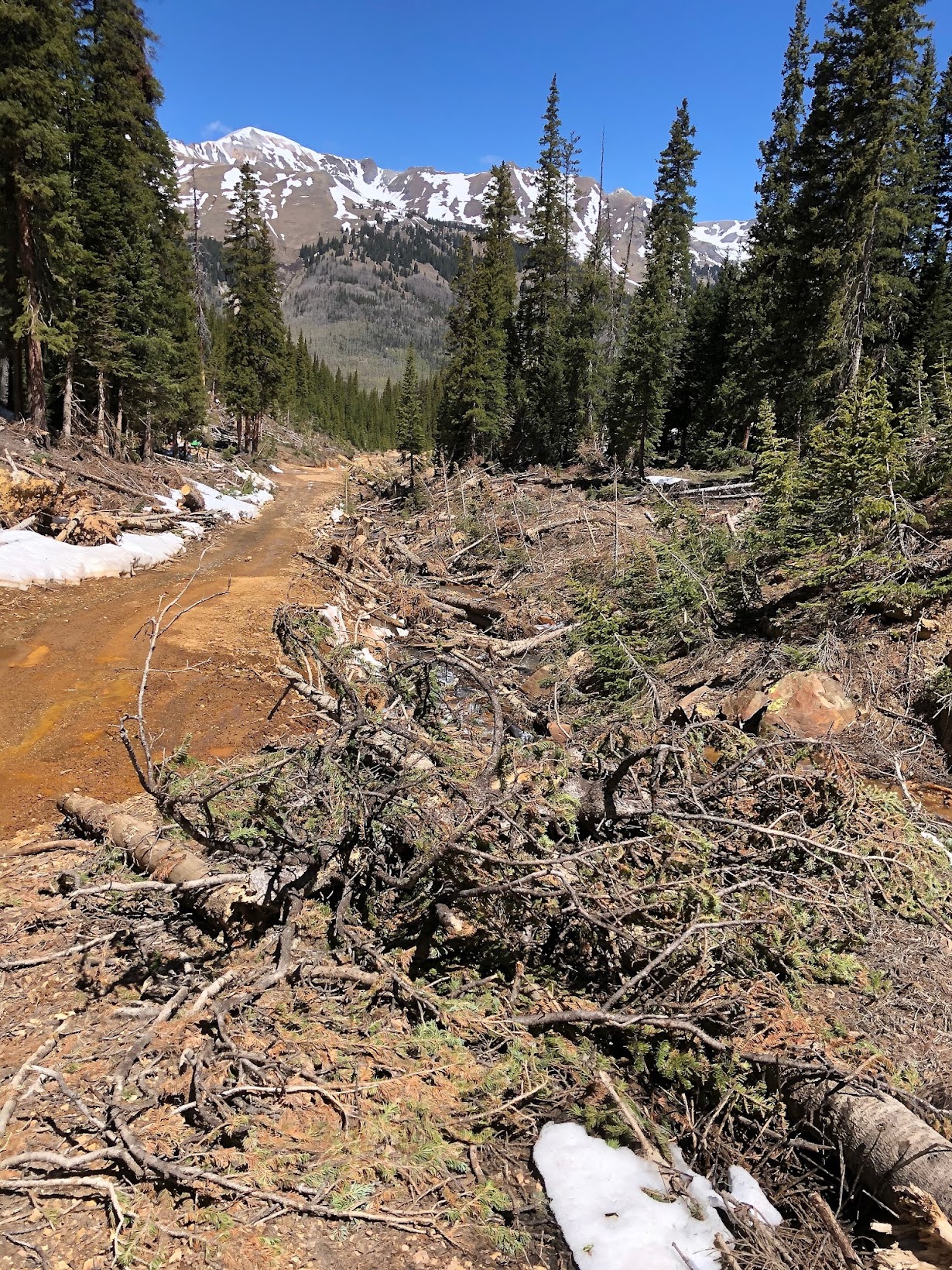 After a couple miles, we ran into large diameter aspen and pine trees dozed aside to Corkscrew's shoulders. There, snapped like toothpicks, pine and aspen lay scattered like a train wreck after having been swept down-mountain by avalanches. It's not what I would consider a safe route for winter backcountry exploration, but some people risk it due to the great "bowl" skiing higher up. 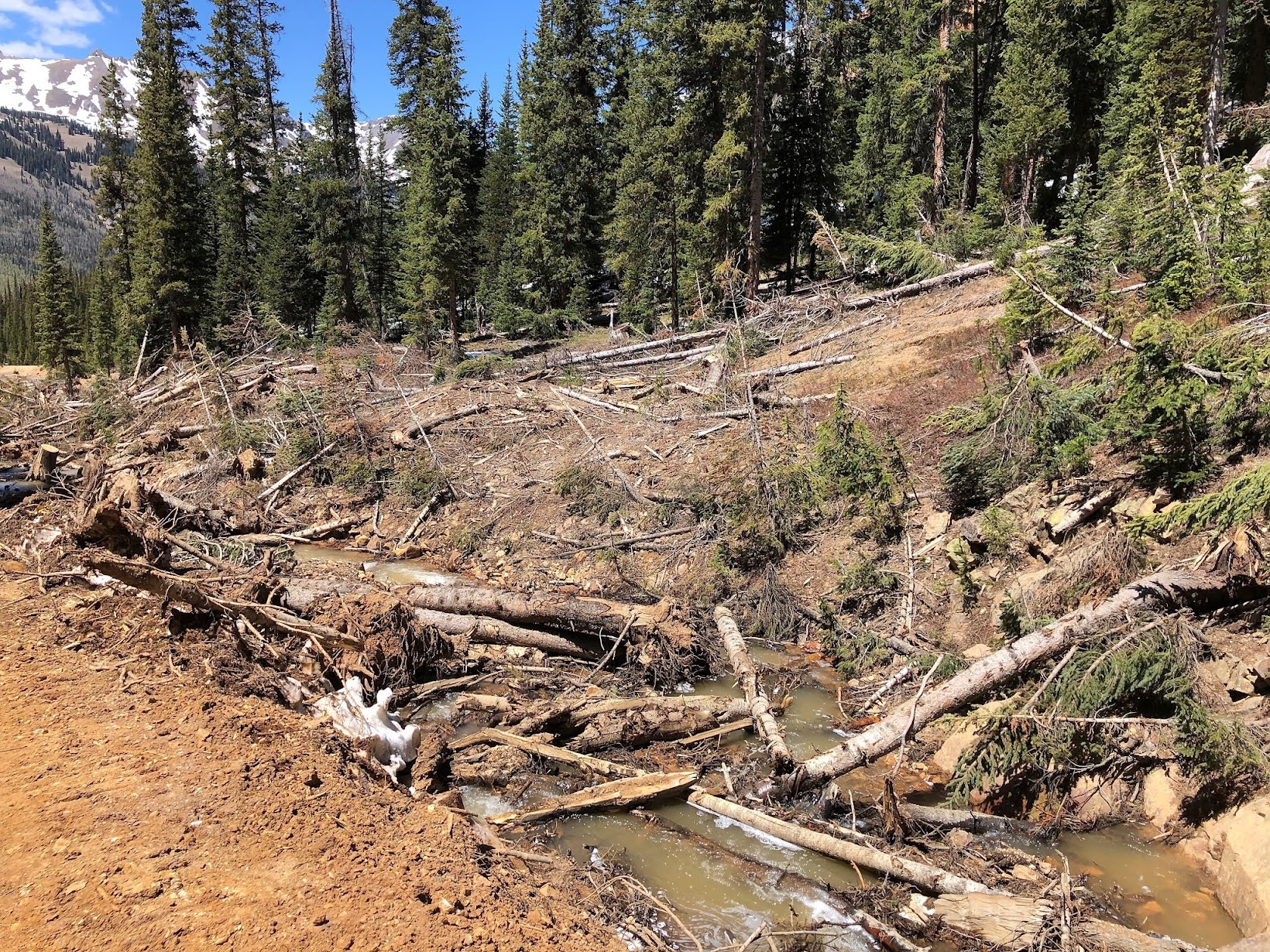 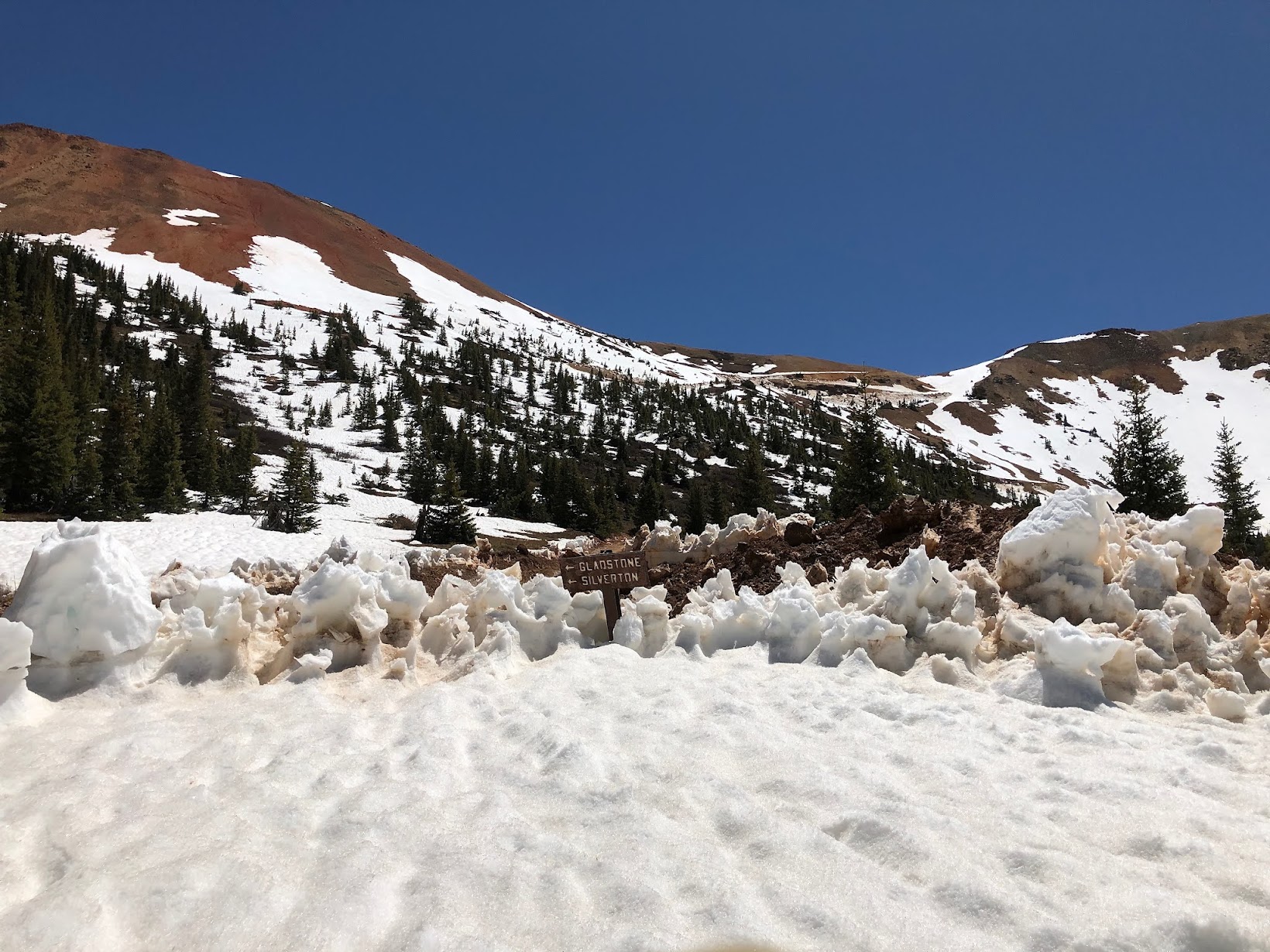 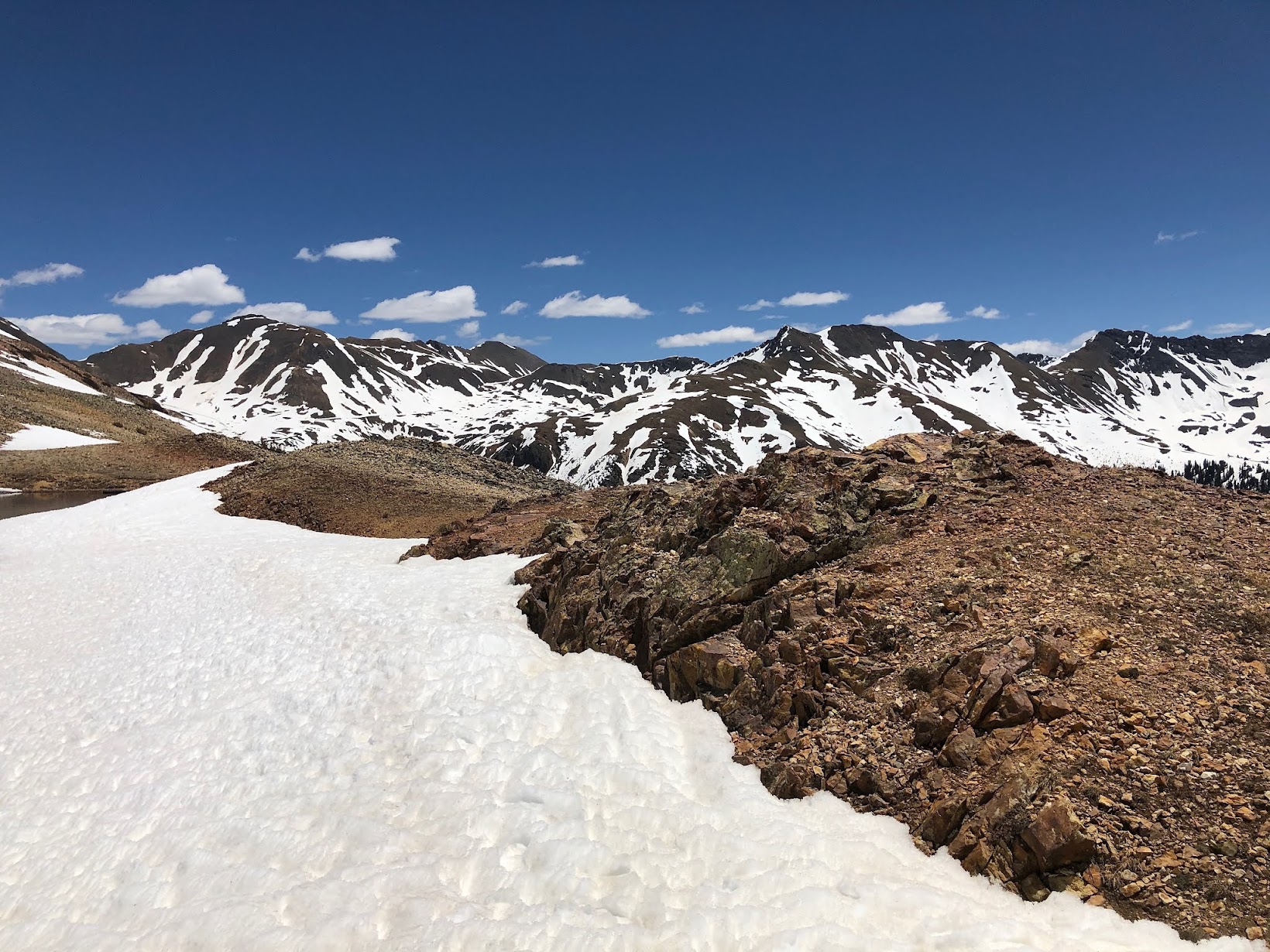 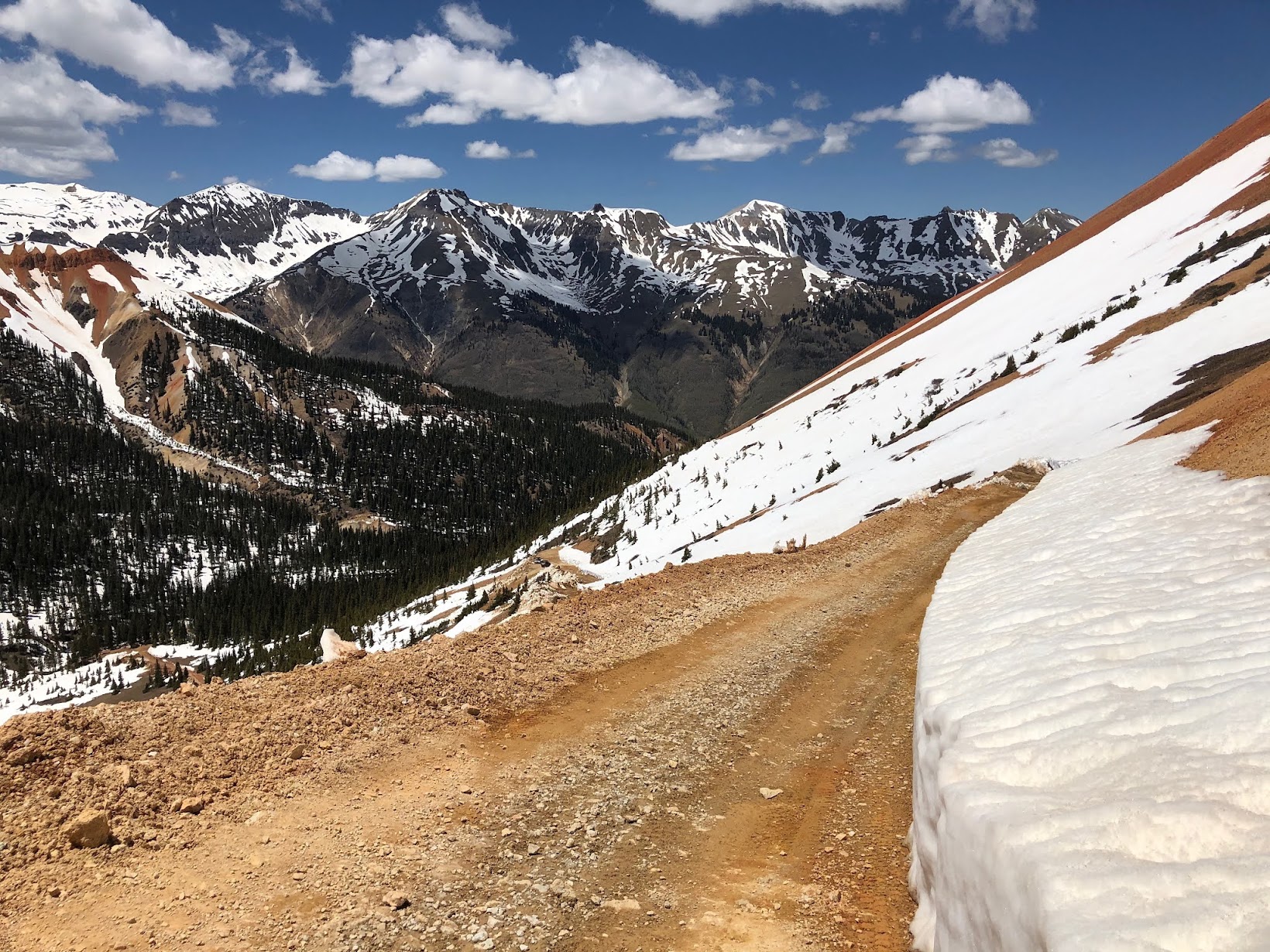 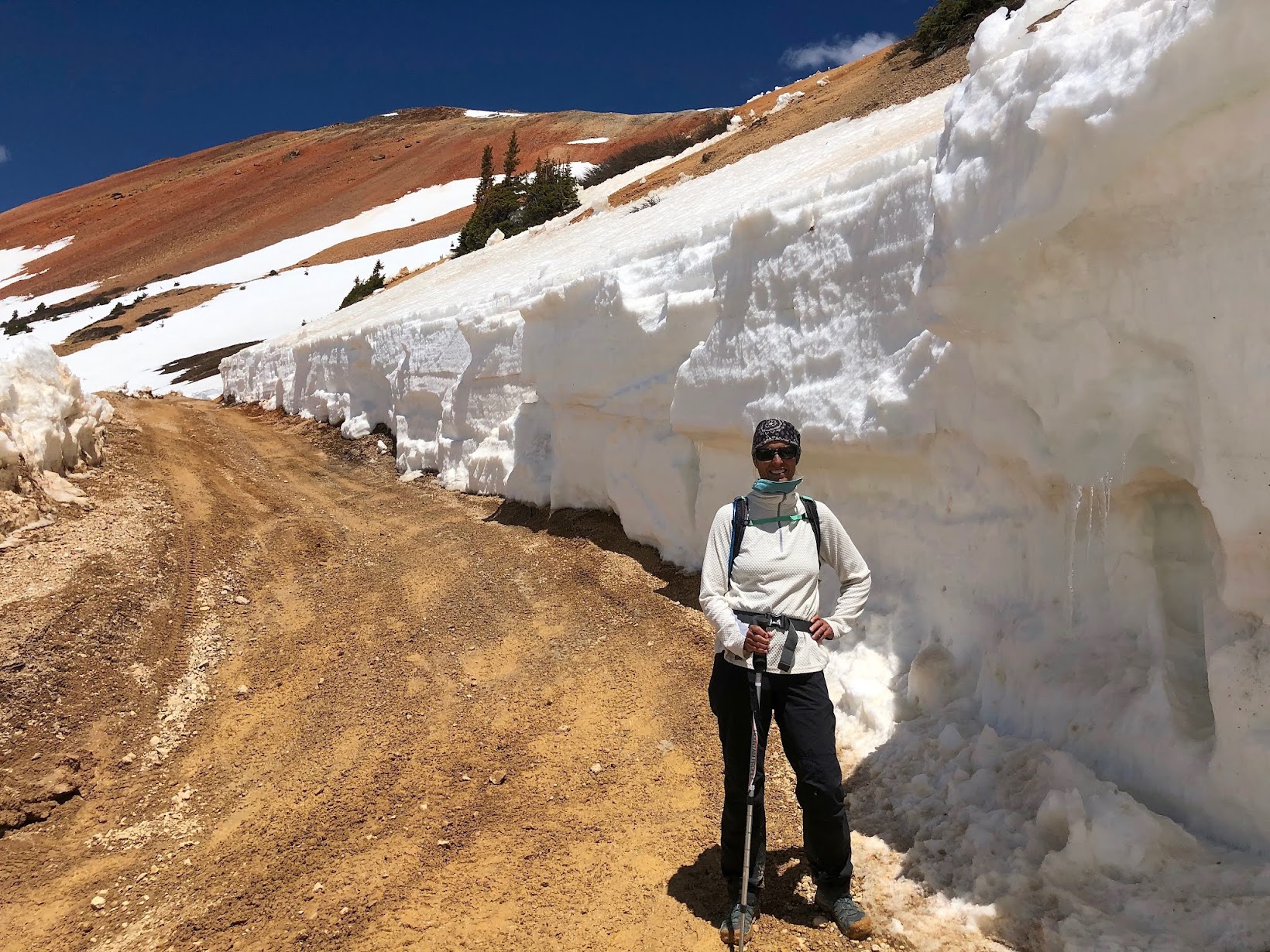 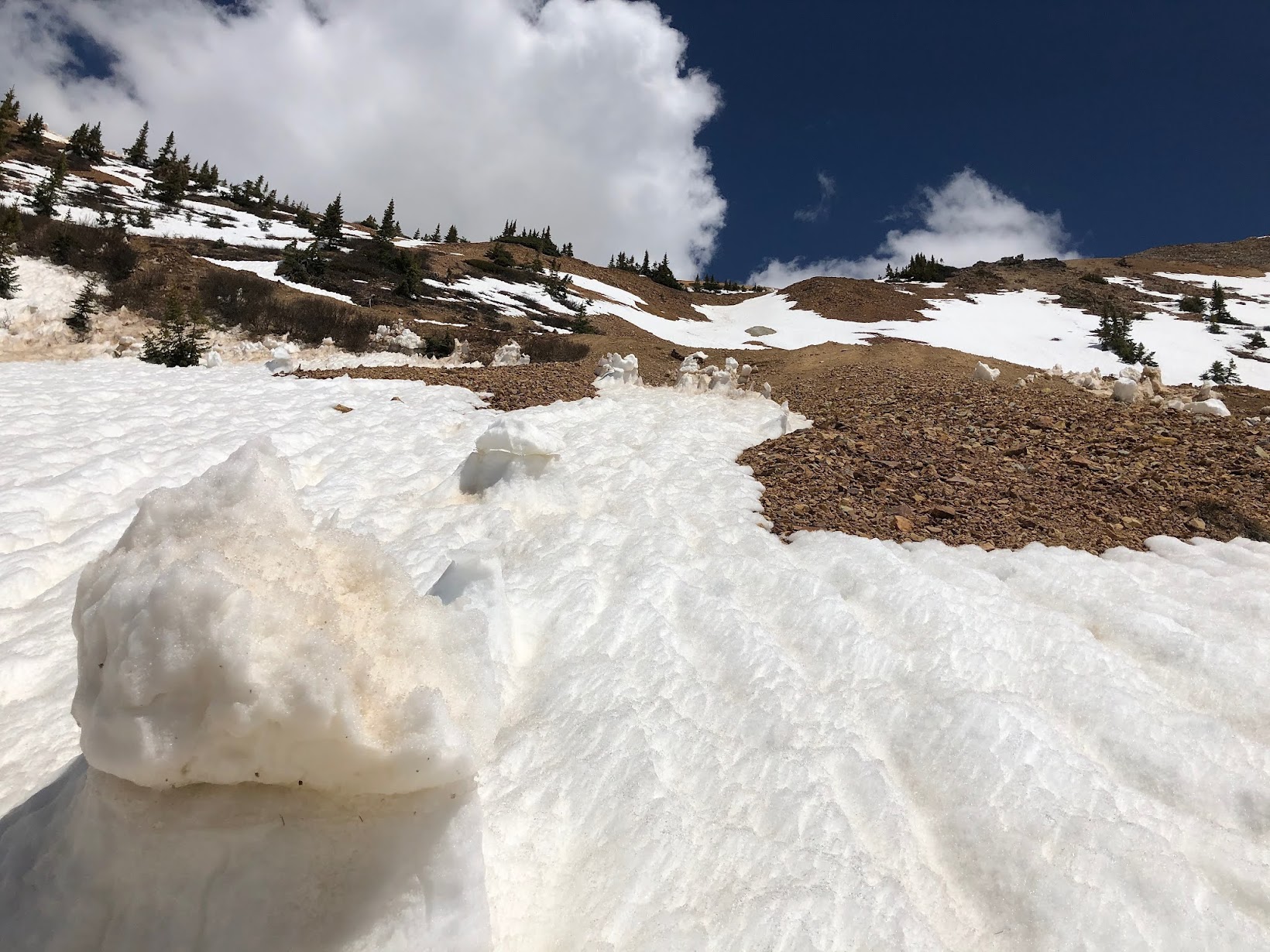 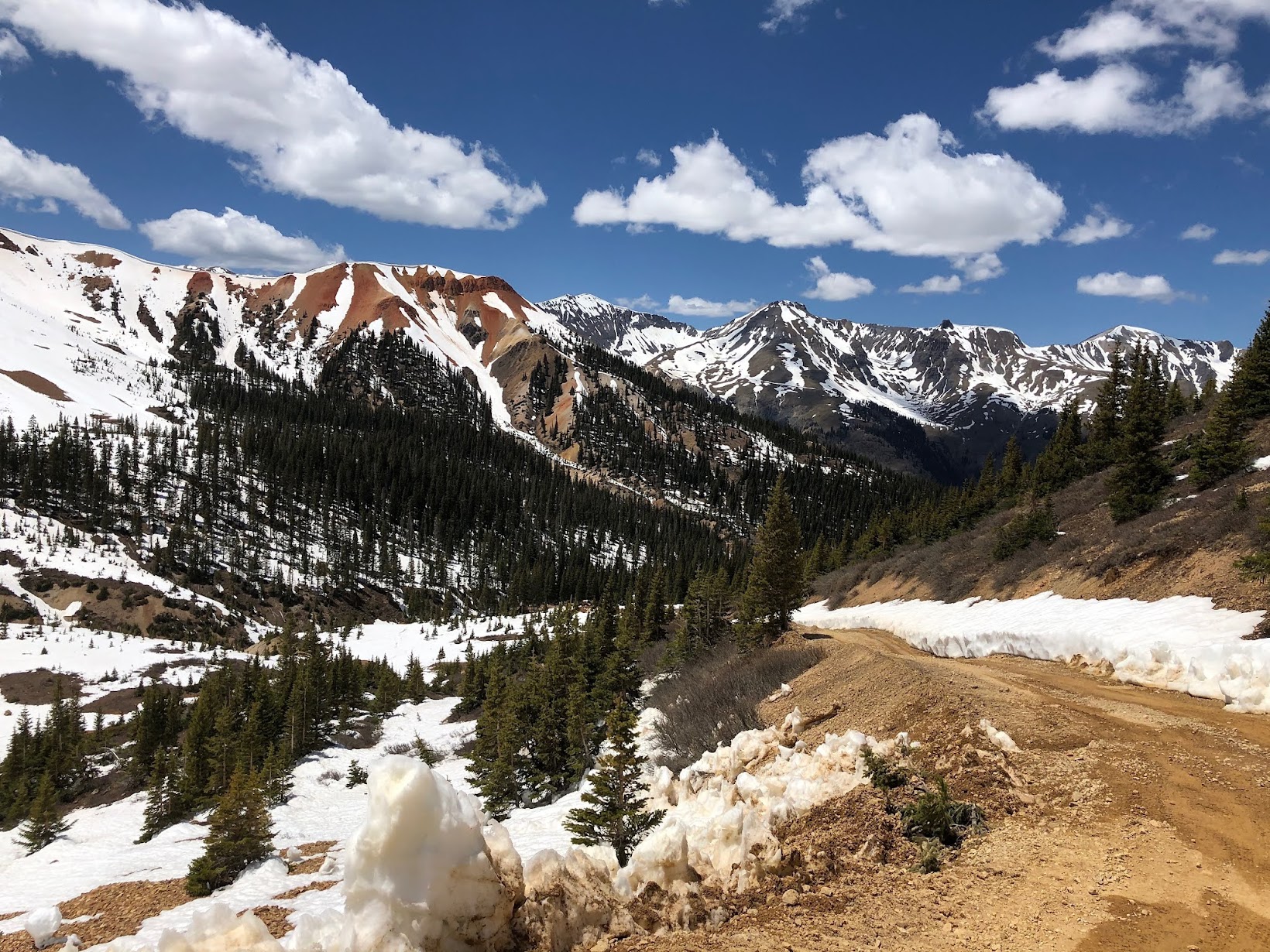 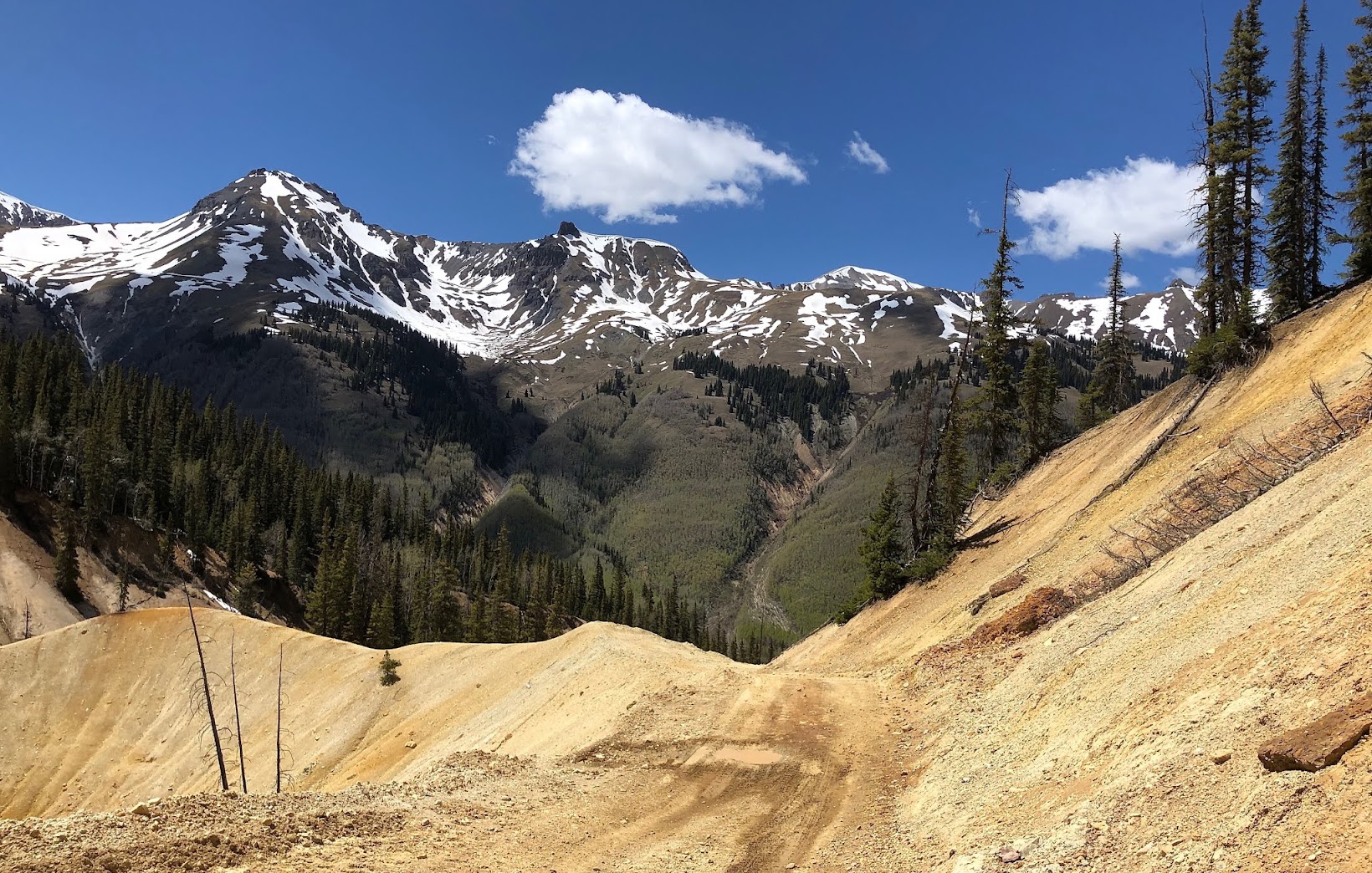 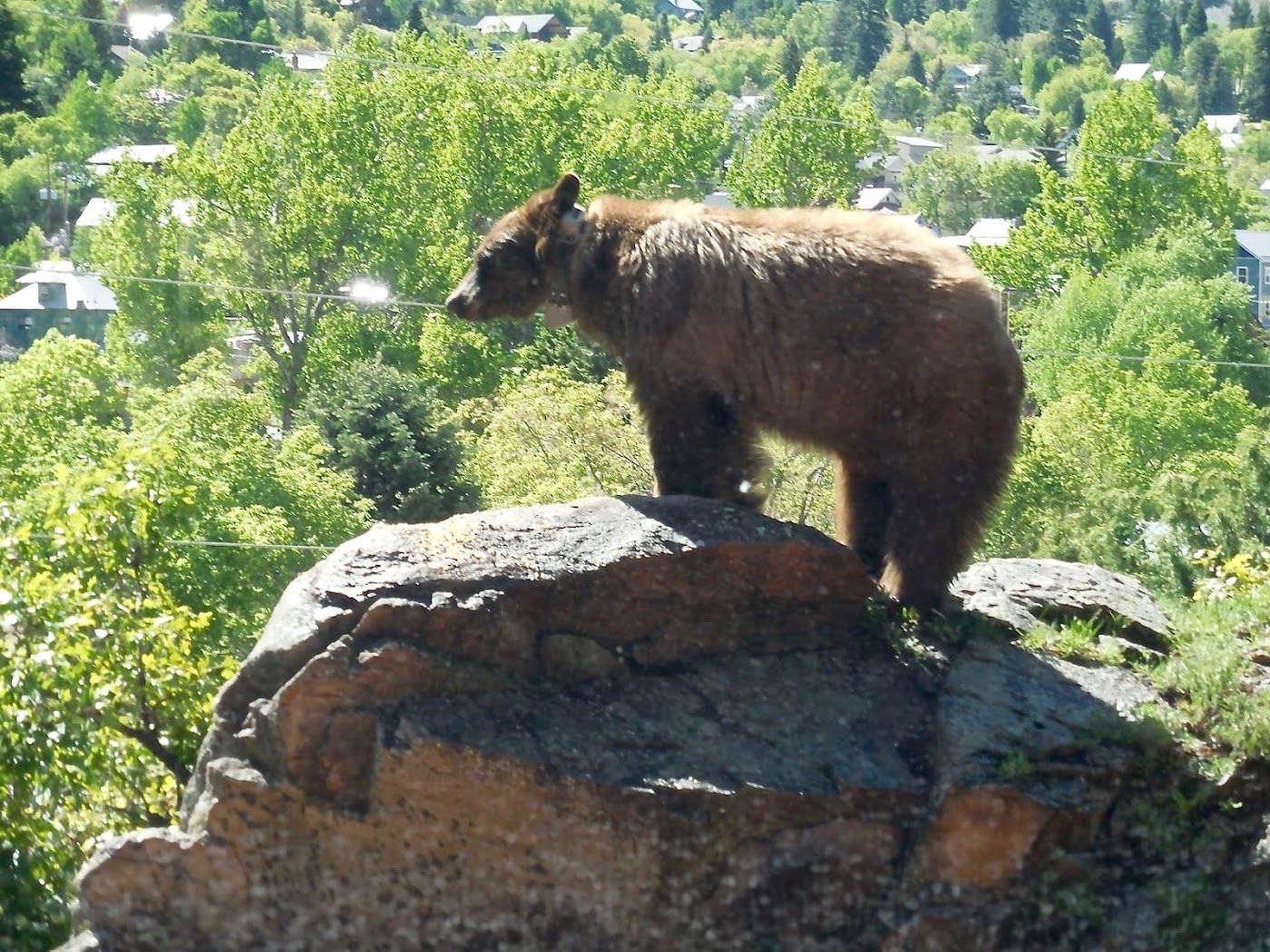 Every few nights this big guy follows his nose to our outdoor "bear-proof" trash container (we have no room in the garage). He attacks the container with great fury, which wakes us out of sound sleep, wondering who in the Hell is trying to break into the house.

He smacks the trash can around for a while...sniffing at the spoiled goodies inside. Some nights he even tries jumping up and down on it, or dragging it all over the drive. It make's a big ruckus. I've had to fix the damage he does a couple times, but so far our bear-proof trash container has held up to bear abuse...except for the growing collection of teeth punctures around the lid. 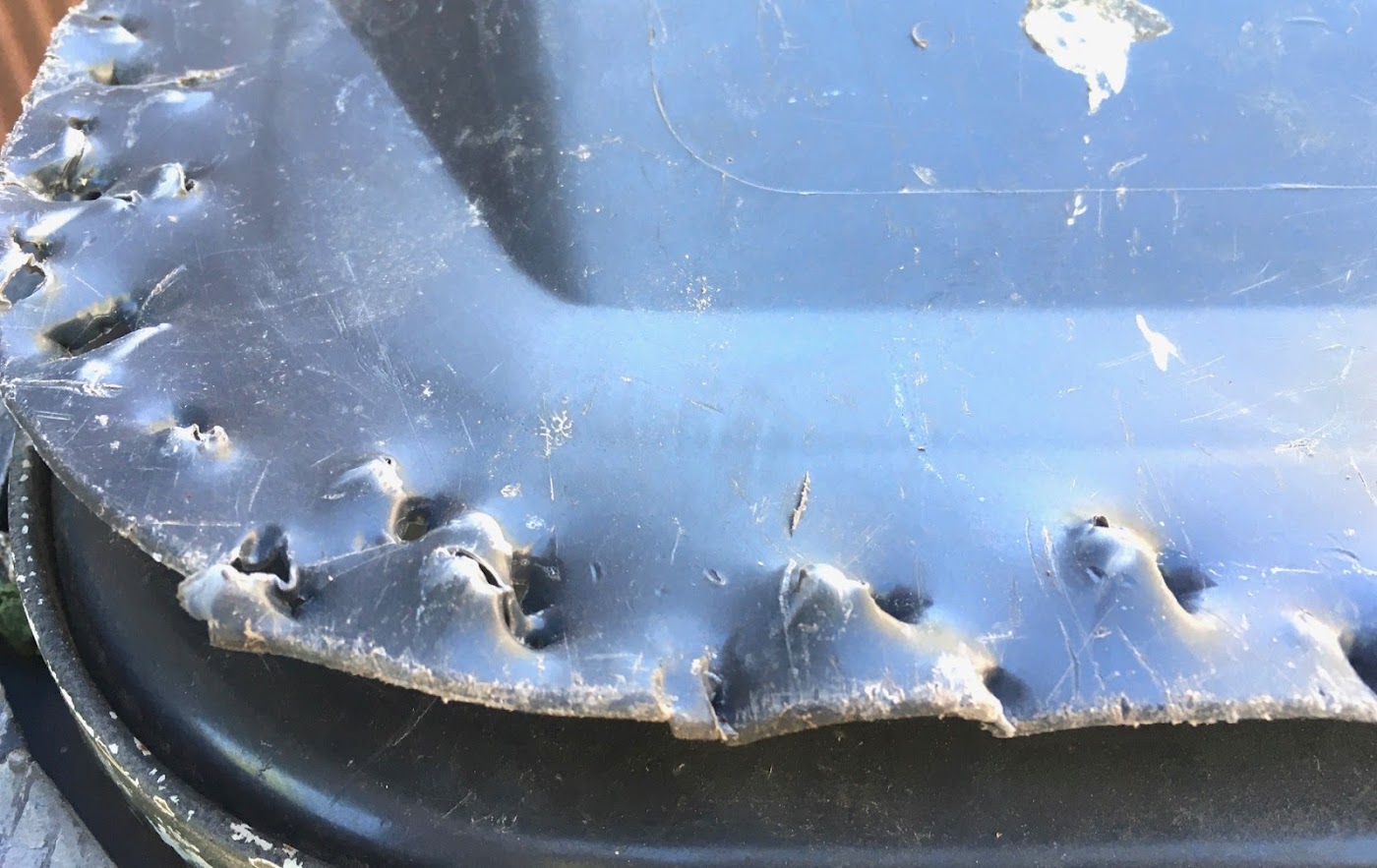 Peace out,
mark and bobbie
Posted by Box Canyon Blog.com at 8:56 AM