The "Stone House" Route To Columbine Pass, Then On To Oh-So-Blue Columbine Lake 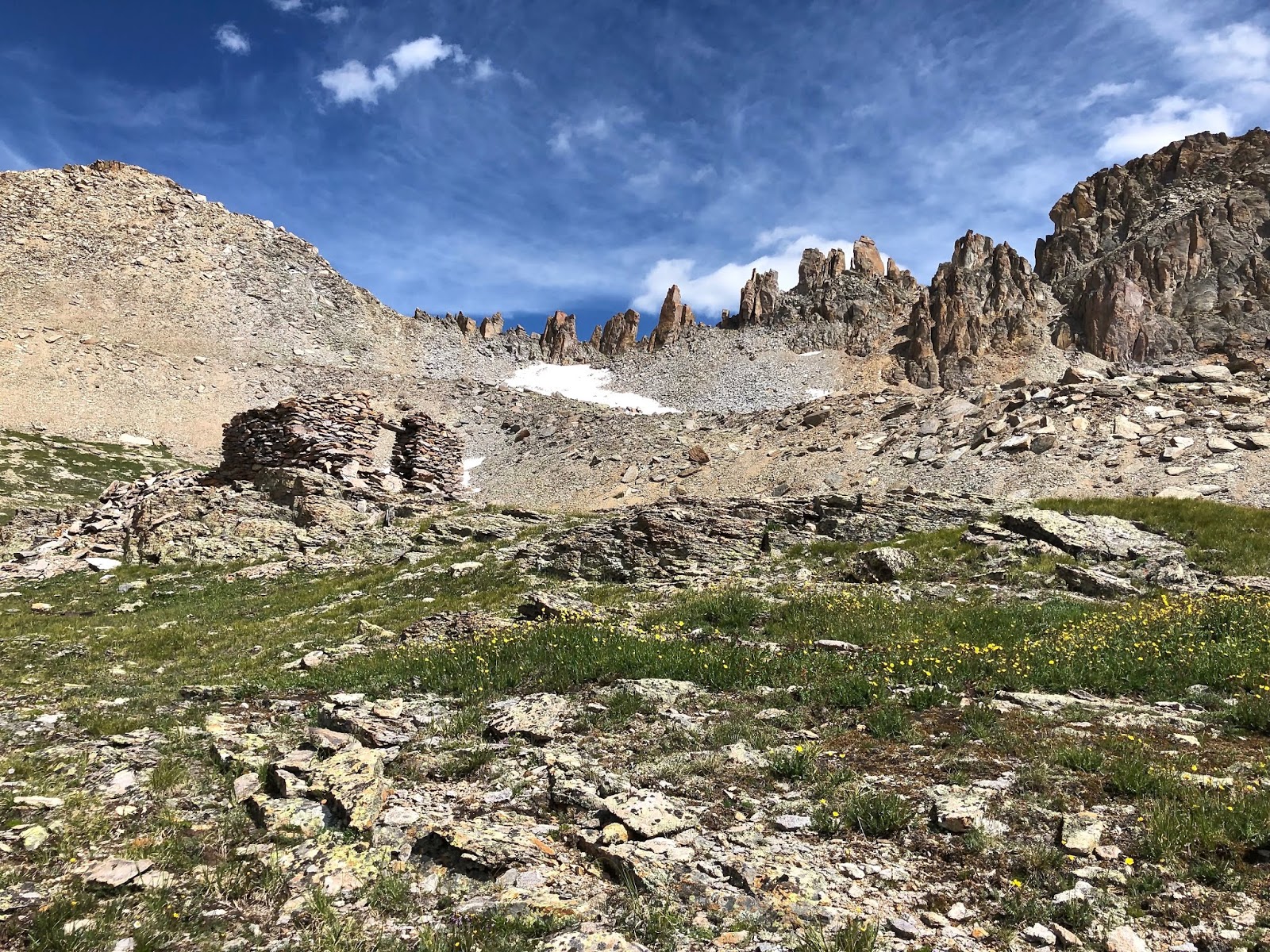 A lake is the landscape's most beautiful and expressive feature. It is earth's eye...looking into which, the beholder measures the depth of his own (soul).  Henry David Thoreau

Of course, not every lake rises to Thoreau's lofty "bar," Certainly not Walden Pond.  I've seen Walden Pond; trust me, it doesn't compare to alpine lakes...not even close.

So Bobbie managed to drag Bruce and Tamera away from their entrepreneurial enterprise, Mountain Fever gift-shop (with the best selection of t-shirts in town) for a hike during the slow wane from "peak" to "off" season begins. It had been two years since Bruce's last hike...not counting his miles on foot around town and carting heavy boxes of merchandise up a long flight of stairs at the store a thousand times a day.

We decided to break them in easy, which, by Bobbie—standards, is still a pretty good hike that involves trekking to 13,000 feet and at least 7 miles of up and down terrain.

"Are you trying to kill your bosses?" I plead to no avail.

Anyway, Bruce and Tamera were up for a good outing, so who are we to try and talk them out one that they'll feel the next day?

For this hike I promised lush gardens of wildflowers, cut throat trout cavorting in Bullion King Lake, Ptarmigan somewhere along the way to Columbine Lake, a cool stone miner's cabin, and topped it off with water so blue they'd break down and cry at the spectacle...at least I always do.

After about 3 miles on a narrow, rocky Jeep trail, our 4WD foray to Columbine Lake began at slightly above 12,000 feet. The lake is a short mile above us in Bullion King Basin...the one with all the promised trout.

Of course there were no trout that morning, not even one surface "ring."
I guess they froze out over last winter, I excused.

Still, there was little disappointment in such a spectacular basin etched with a craggy ridge-line horizons...enough to inspire repentance from the most insipid rightwing "drill baby drill" conservatives. (Dick Cheney?)

Imagine if Thoreau had made the effort to forsake his over-romanticized love affair with a mosquito infested mud bog...to "transcend" and meditate in the mountainous glory that lies west of Minnesota (as far west as he ever traveled, for crying out loud). I doubt he would have neither gone nor looked back. The one thing for sure that could have inspired, if not, elevated his writing and legacy...literally, as well as metaphorically. Oh well. As they say: The open door not taken is often one's biggest regret.

So sit back, relax, and take a peak, er, peek, at what awaits wandering eyes and itchy feet in and above Bullion King Basin. 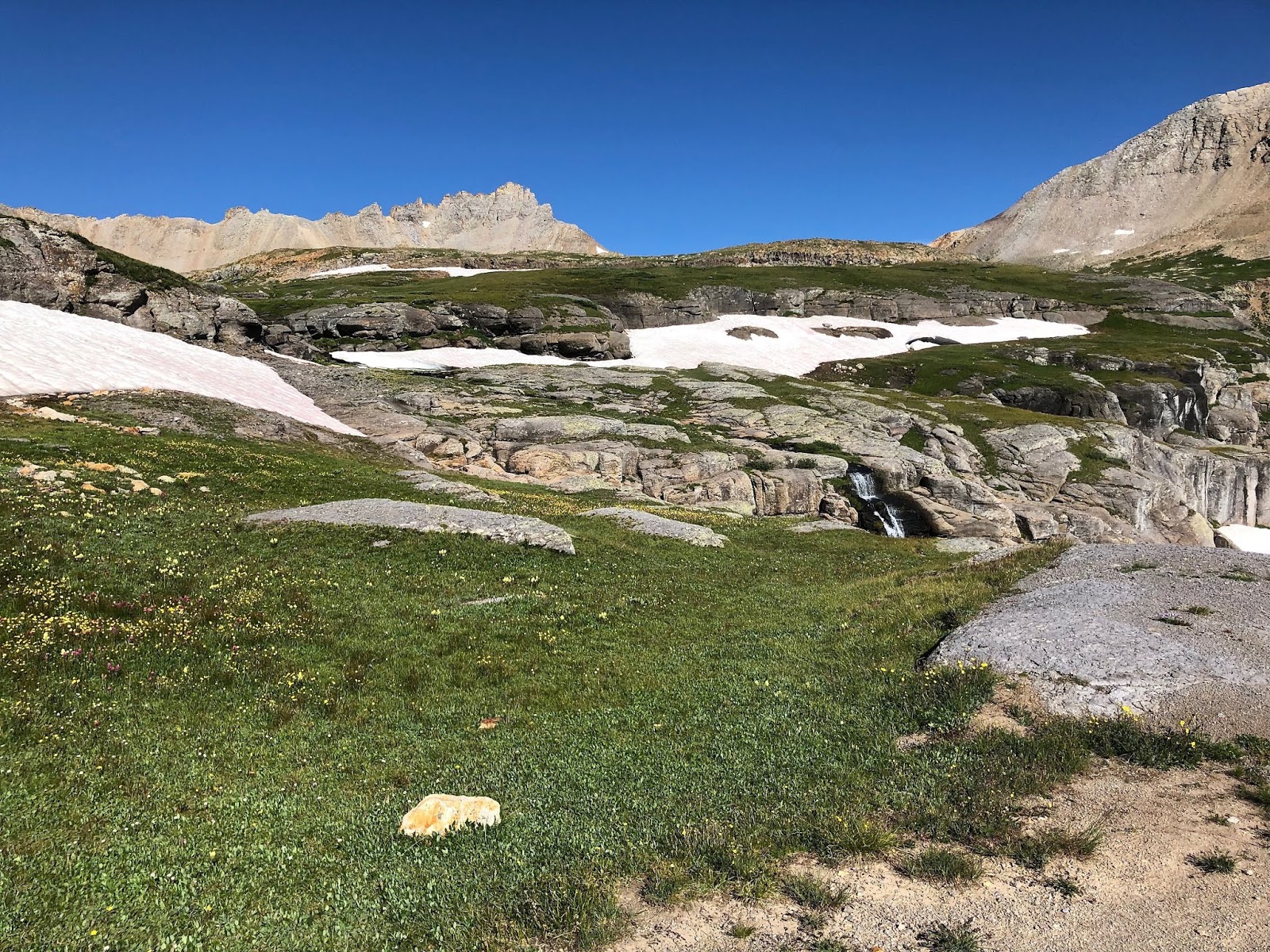 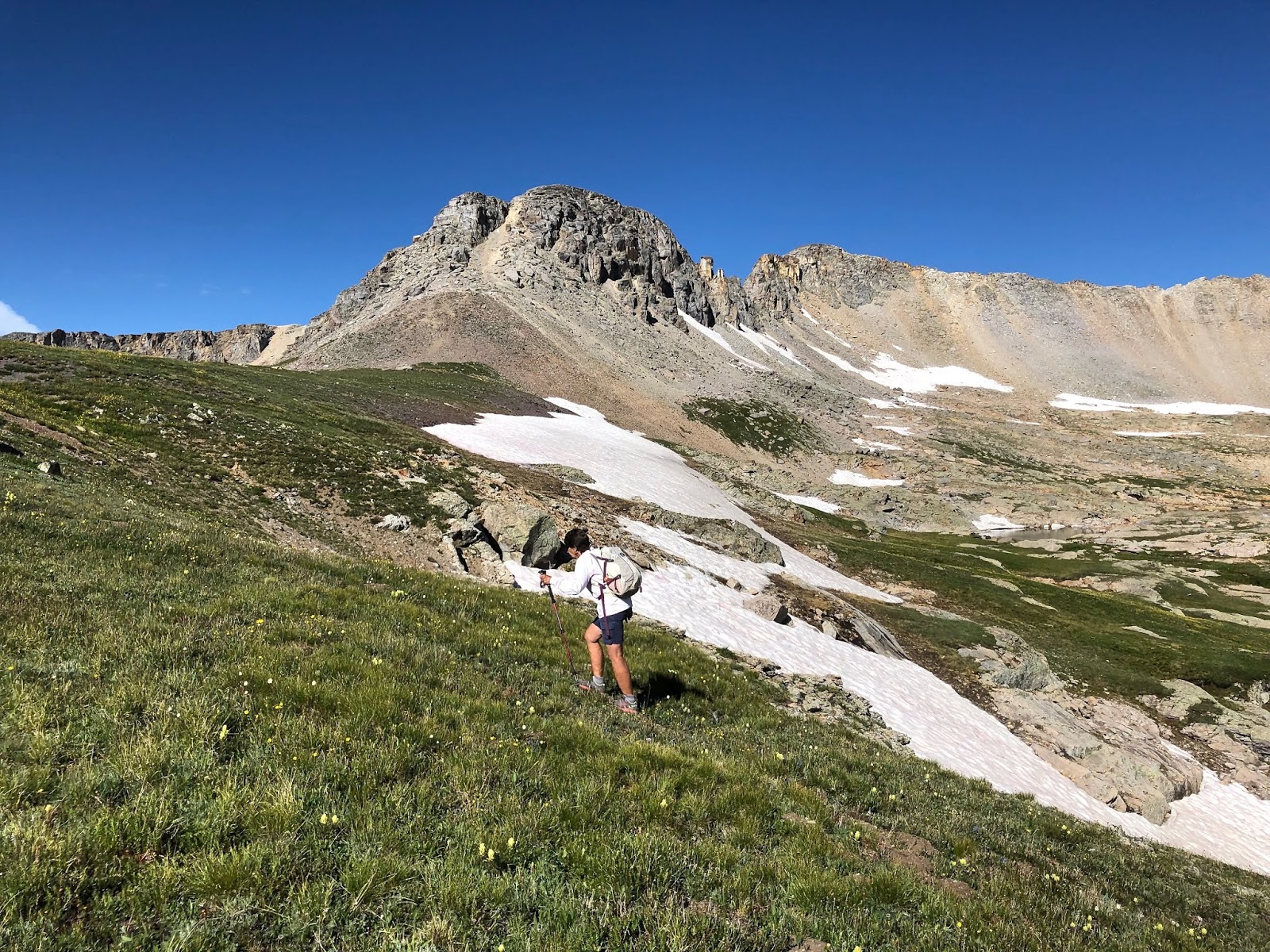 We had to do some rock scrambling off-trail in order to dodge a couple steep, lingering snow-banks on the north-face ridge above Bullion King. But the Heavenly vistas from the ridge...man-o-man, they rolled on and on in perpetuity!

As previously noted, I promised wildflowers. Though not as "primo" as in a "normal" year, they were good enough... 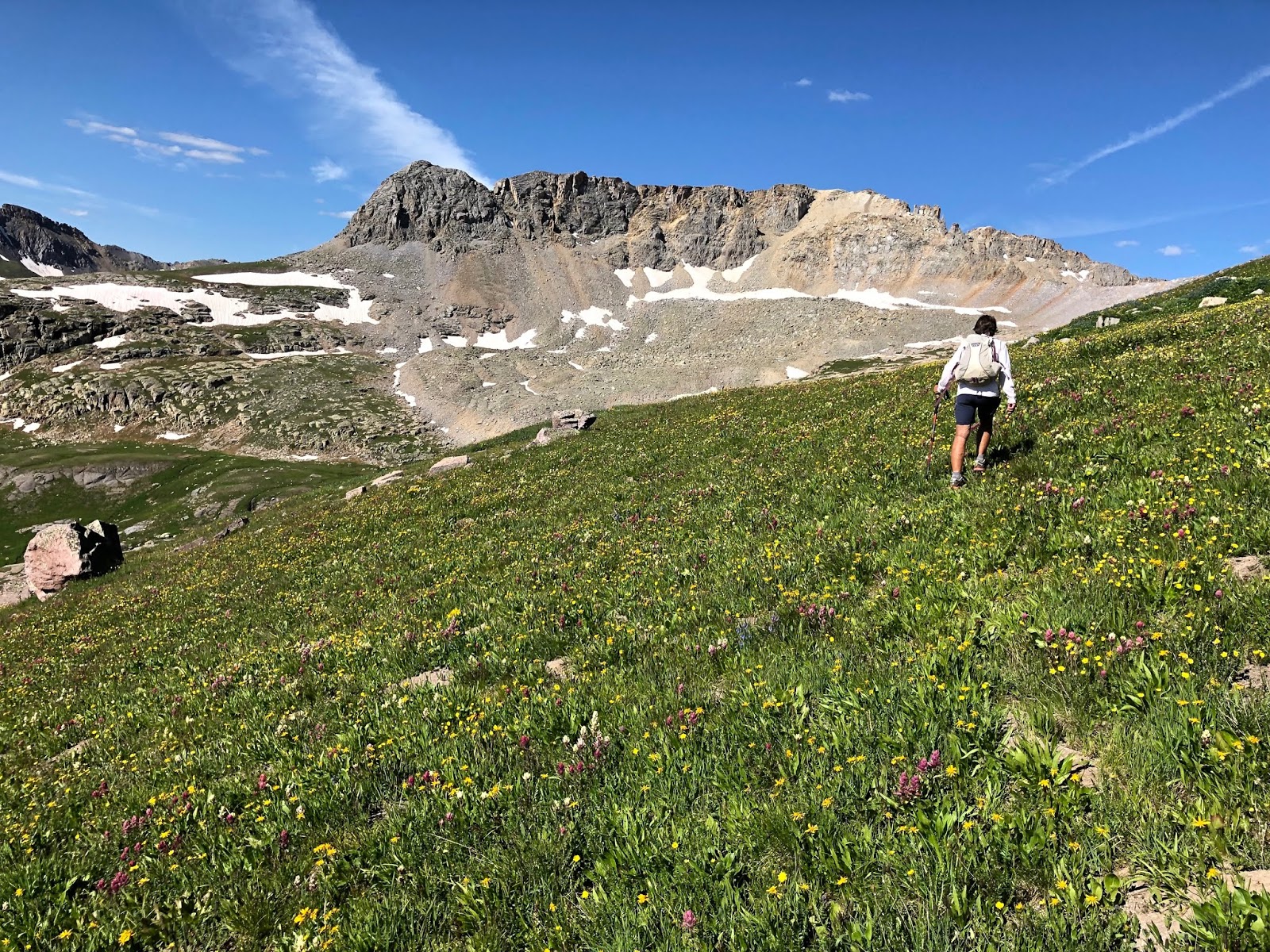 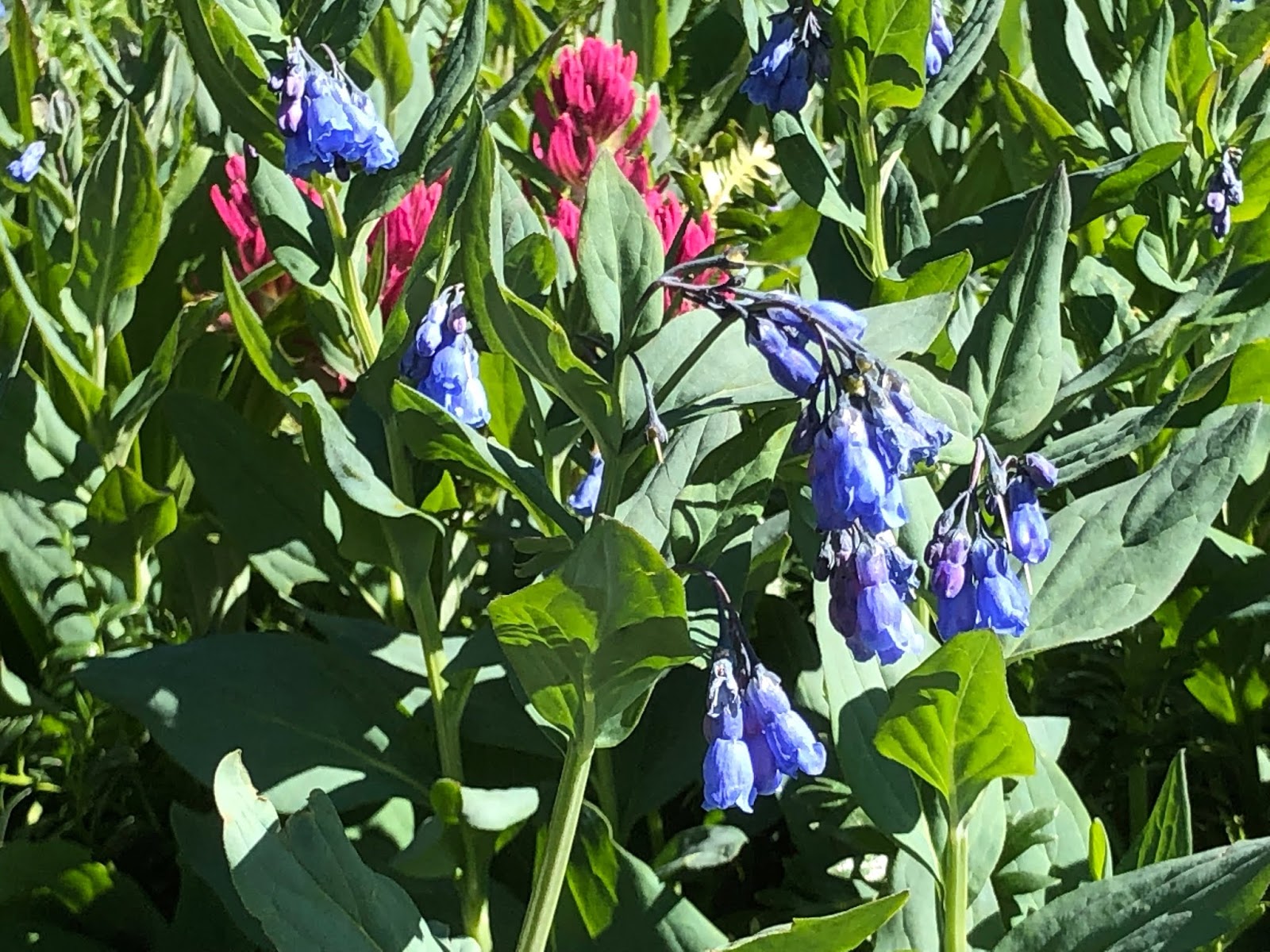 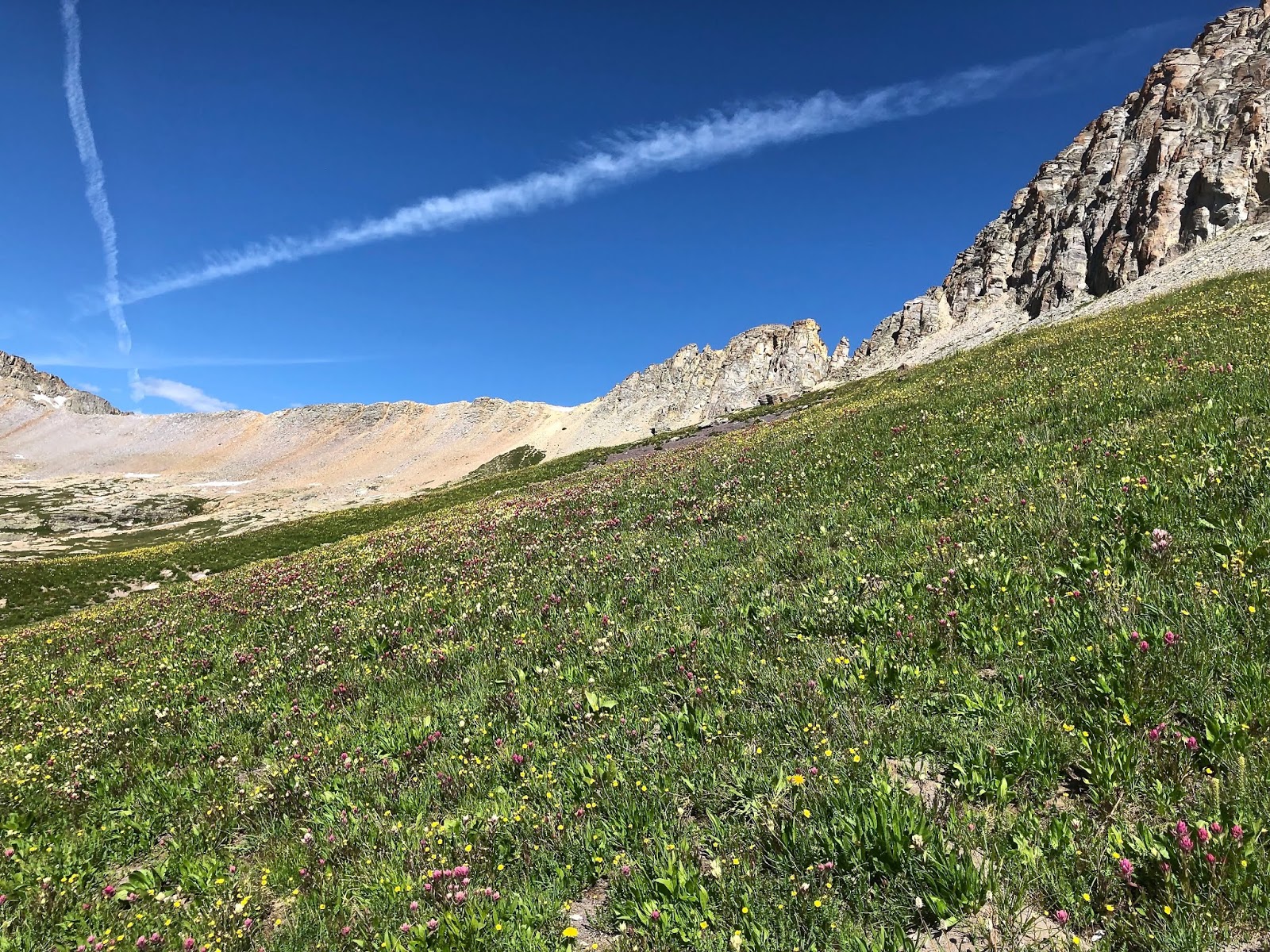 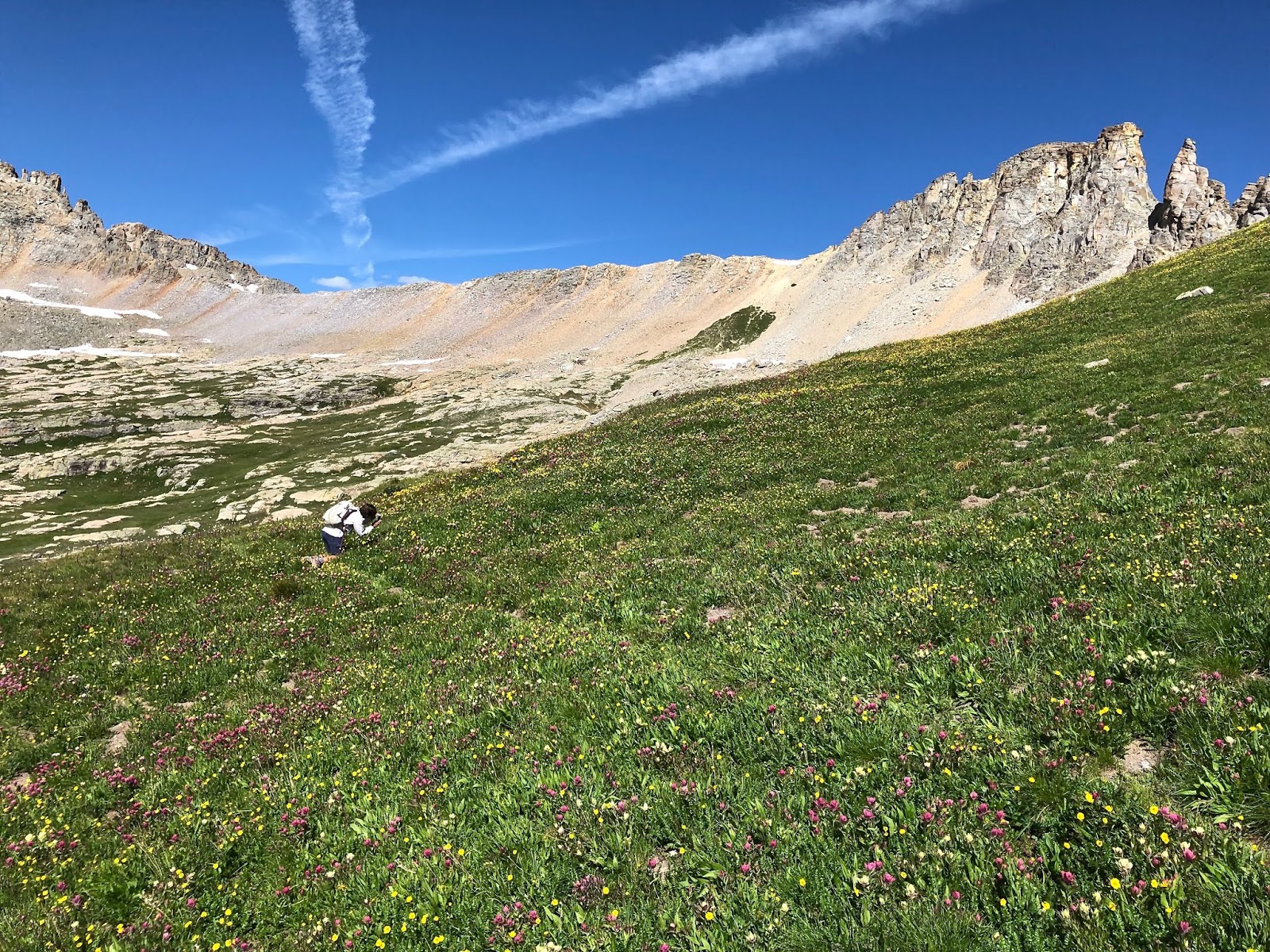 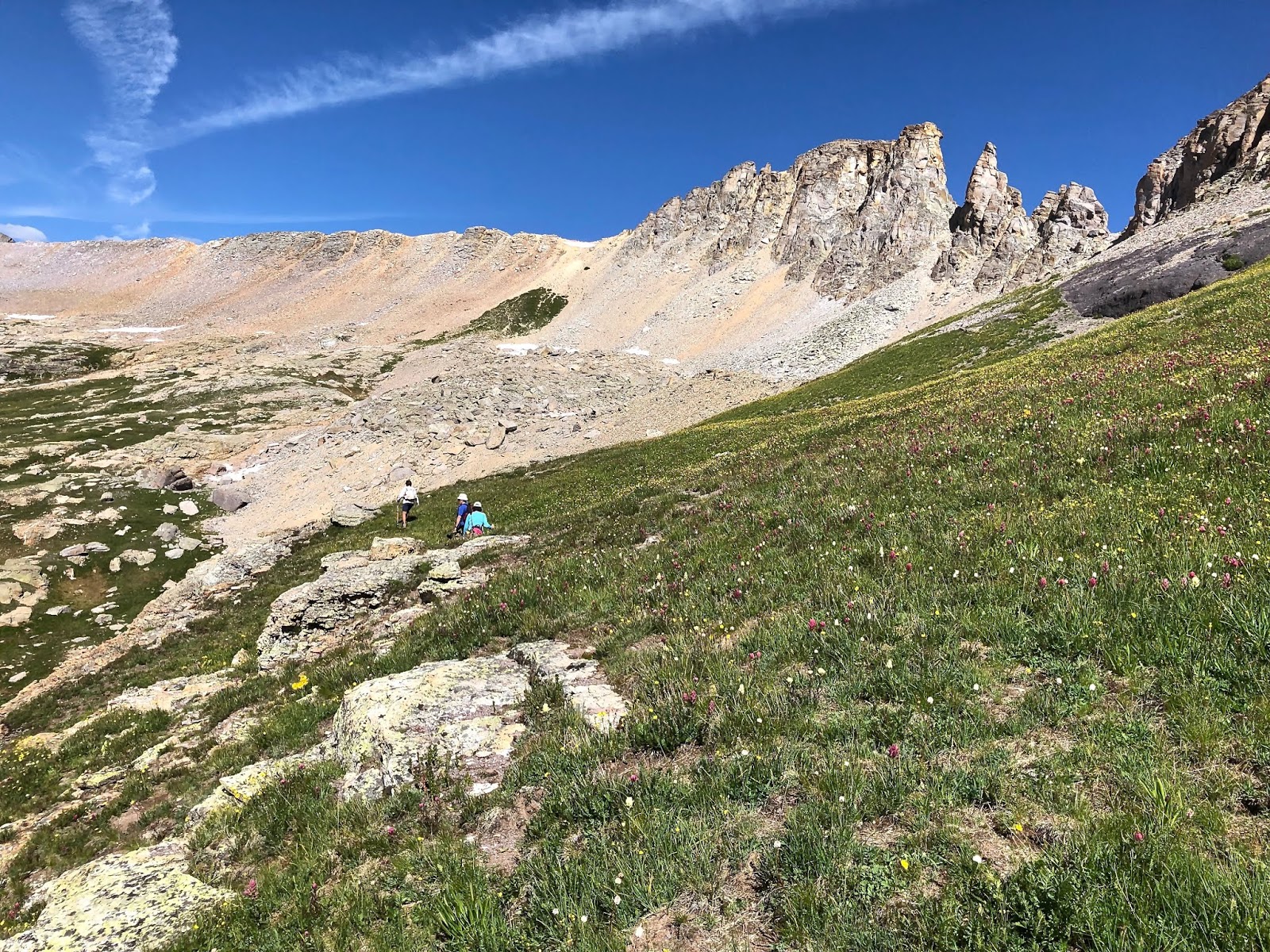 Time to move on from wildflowers...we had a deep gorge to descend and re-ascend in order to reach the "bench" to Columbine Pass and Lake.


We passed through astonishing and rugged high-country... 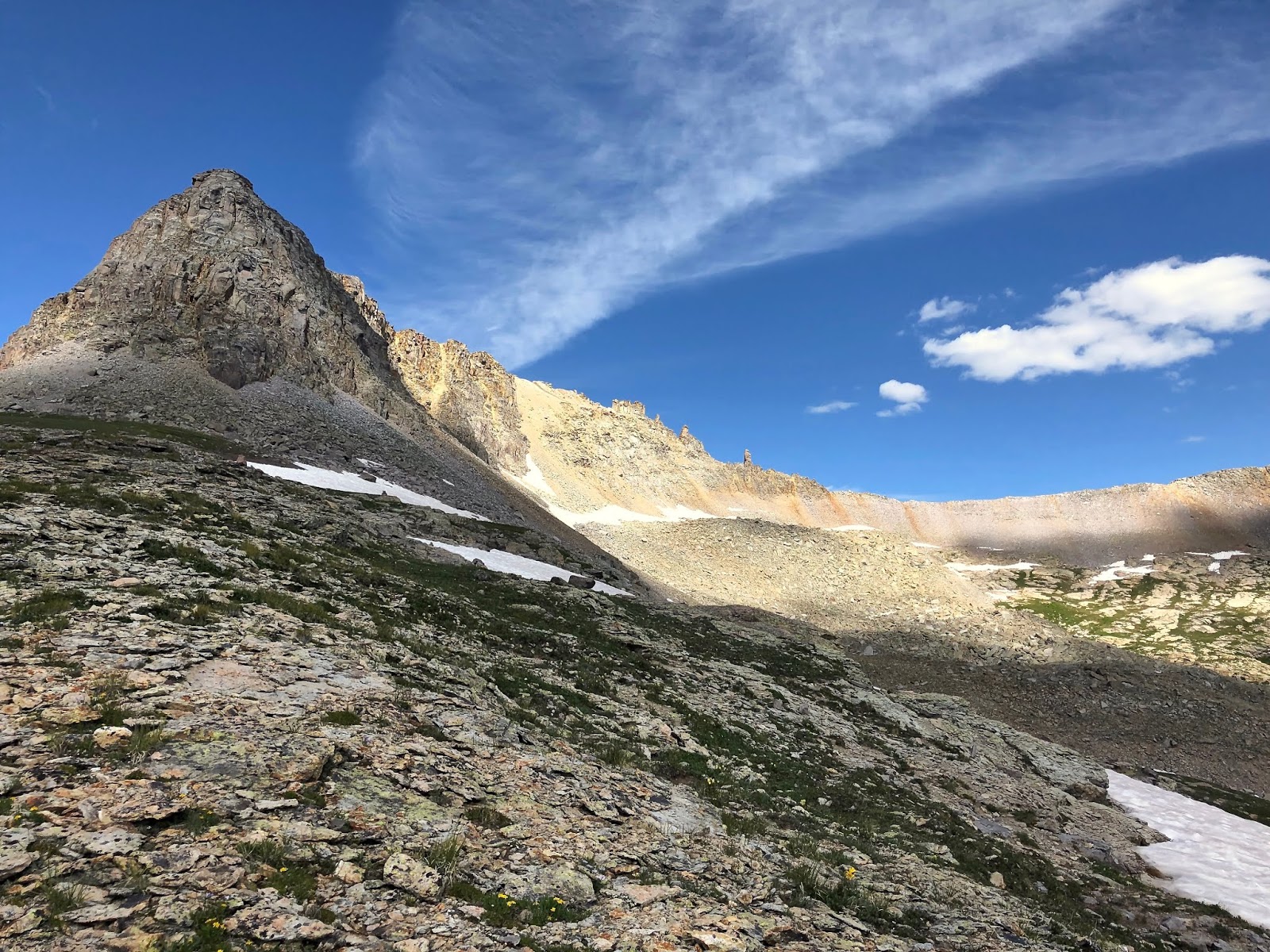 It took a while to find the old miner's stone house. It's nearly indistinguishable against a rising sea of scree and rock. 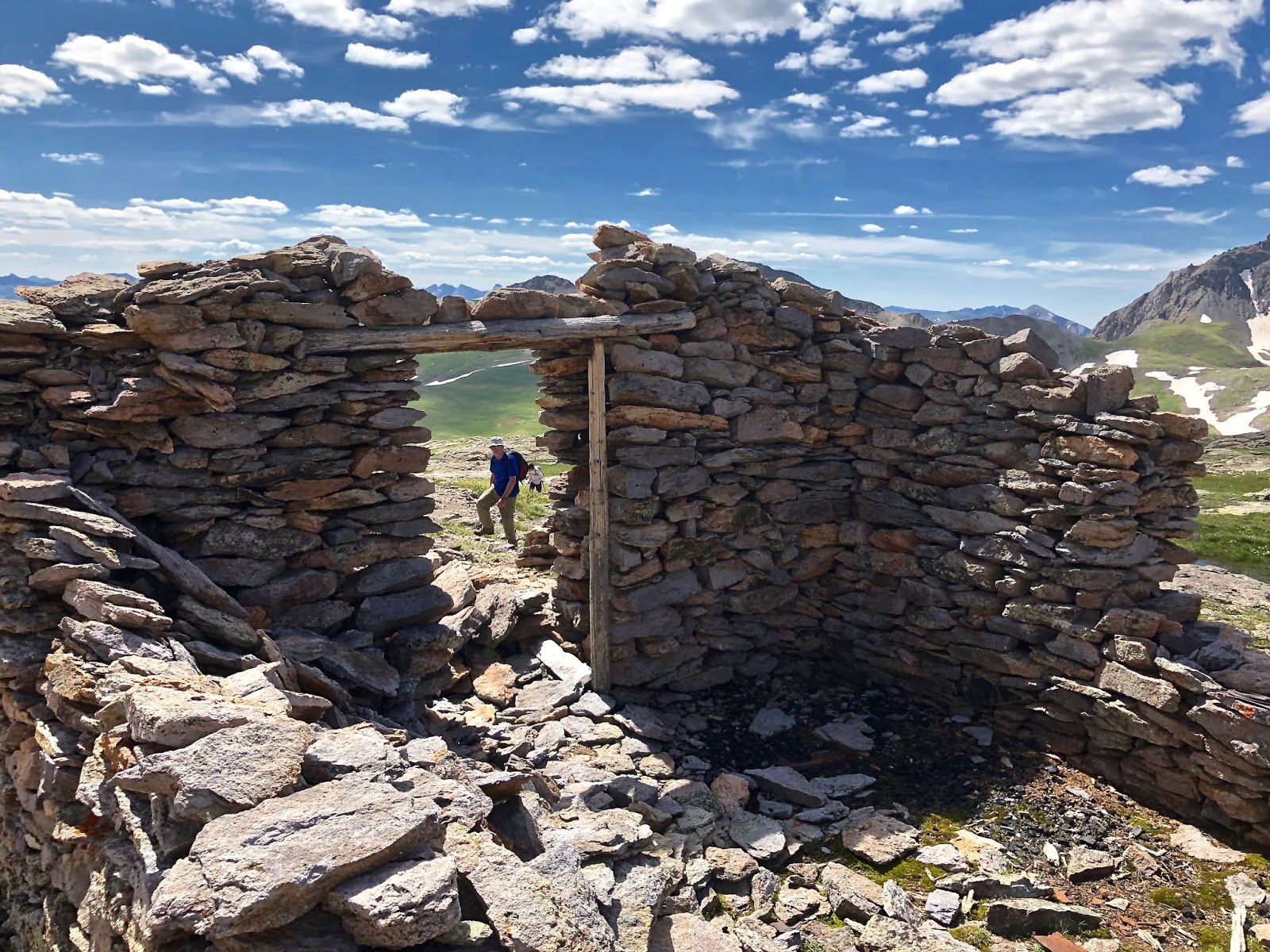 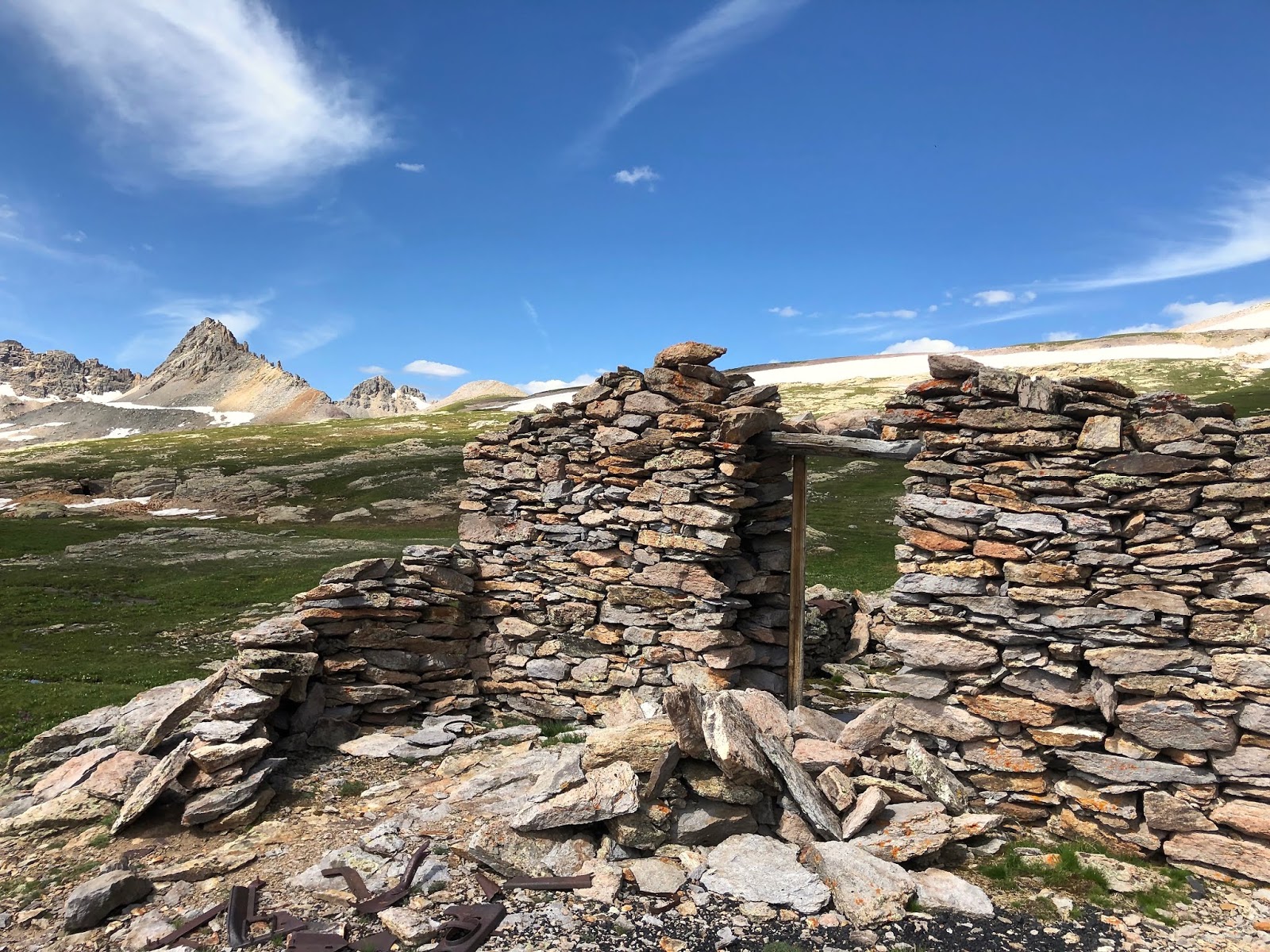 Then on to 13,100 foot Columbine Pass, with its view of Lewis Lake, Oscar Pass, and an old mine/mill building. 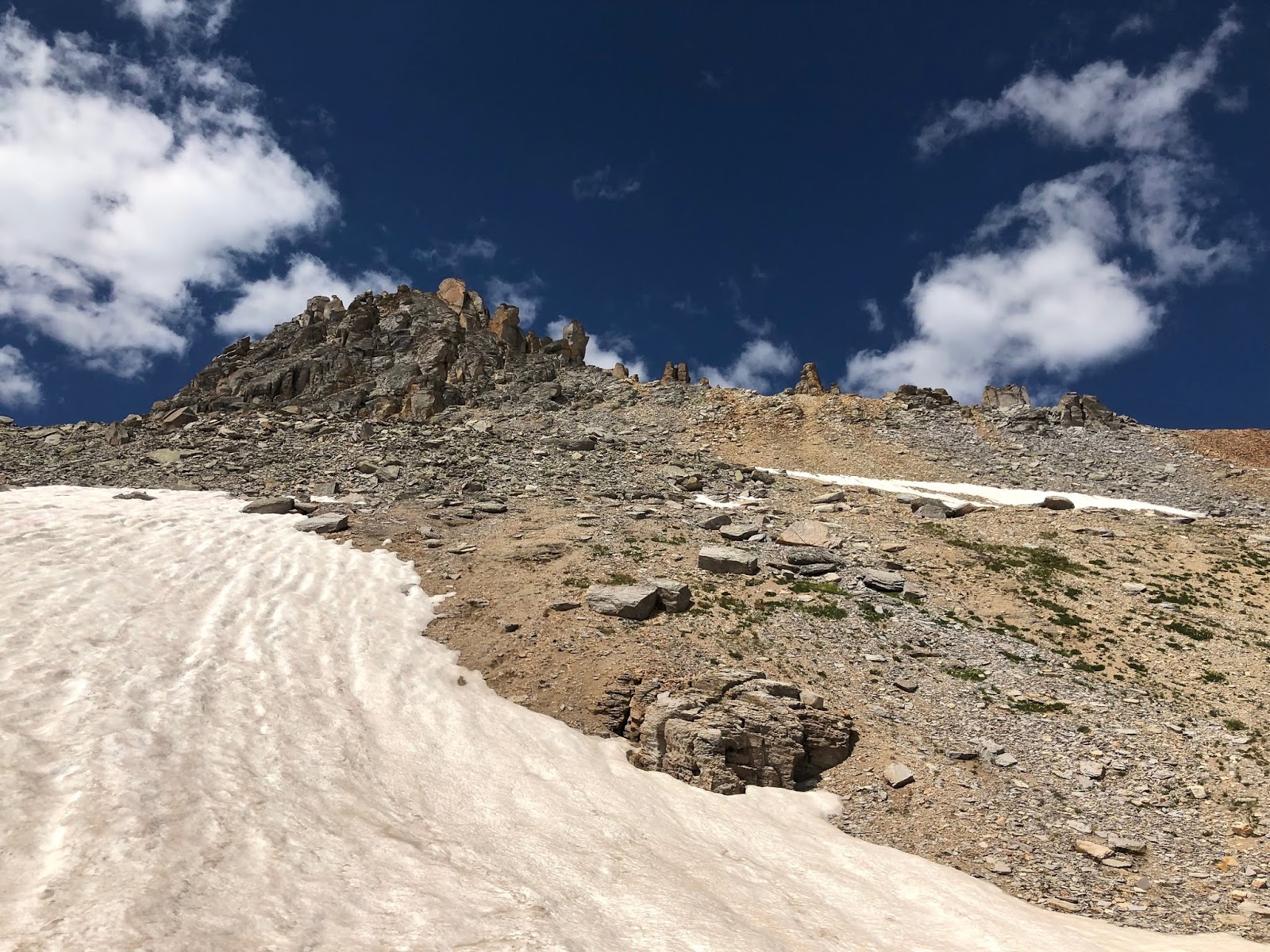 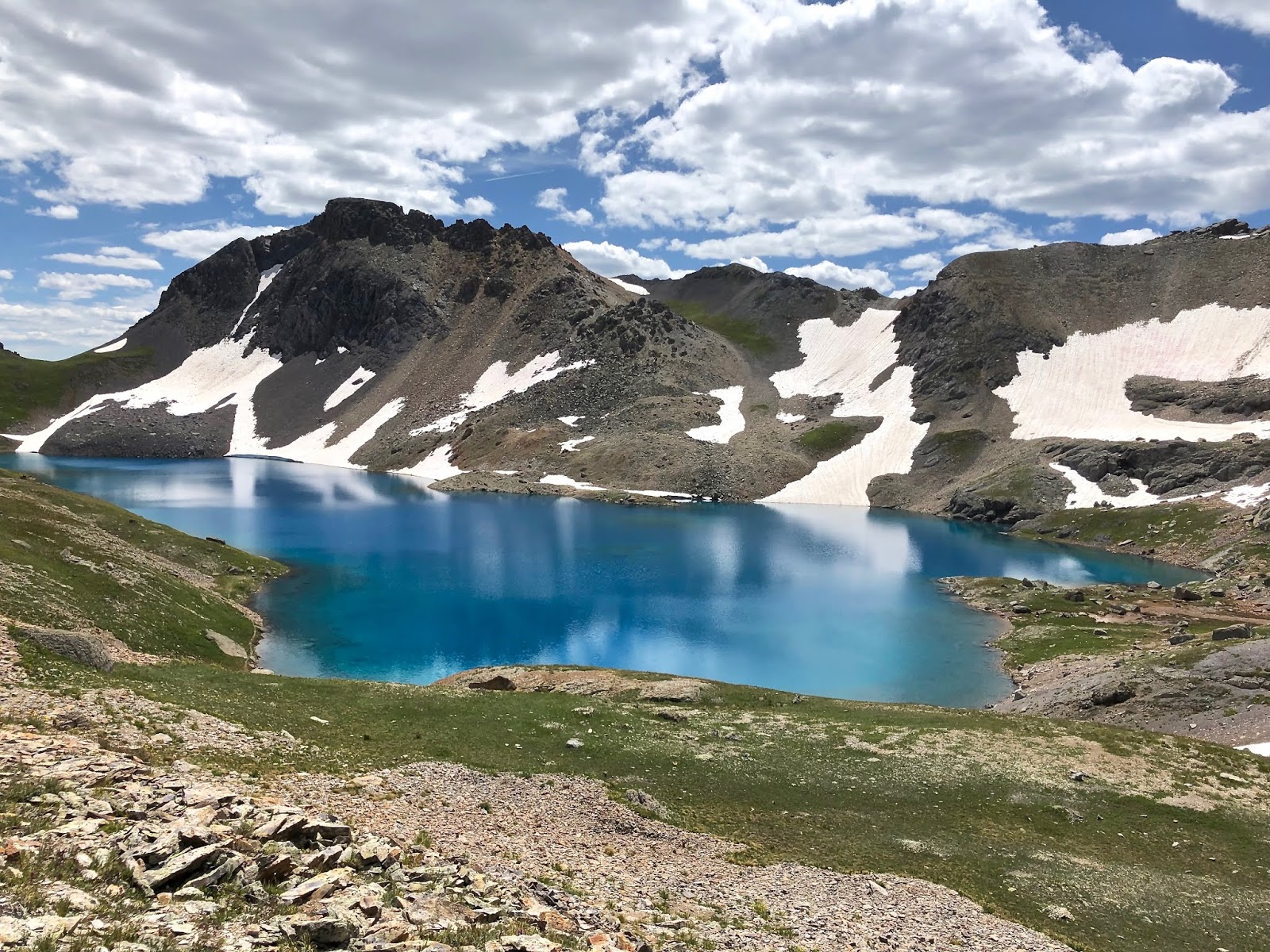 Voila. I give you the Neon Blue, Columbine Lake. It never disappoints... 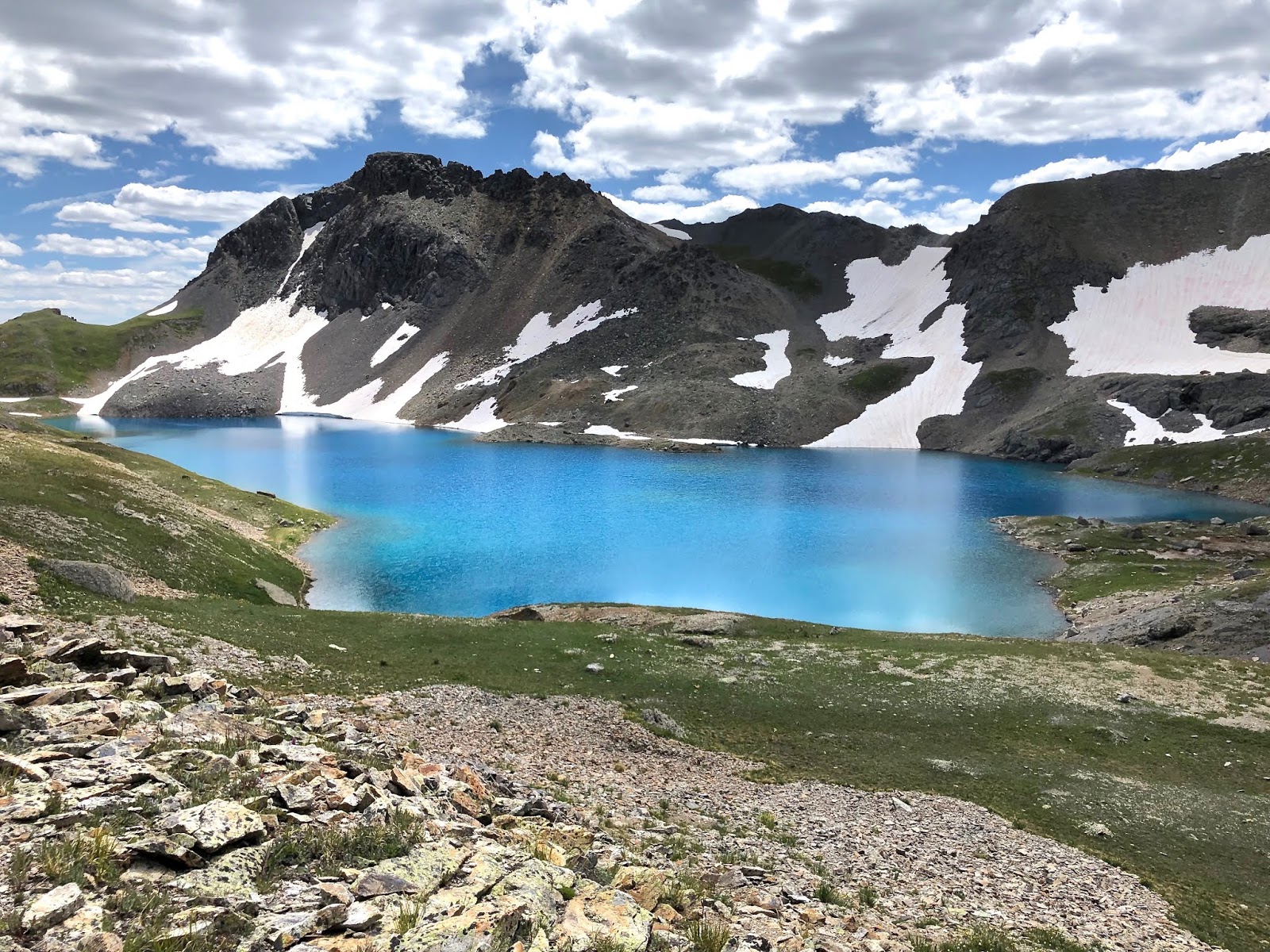 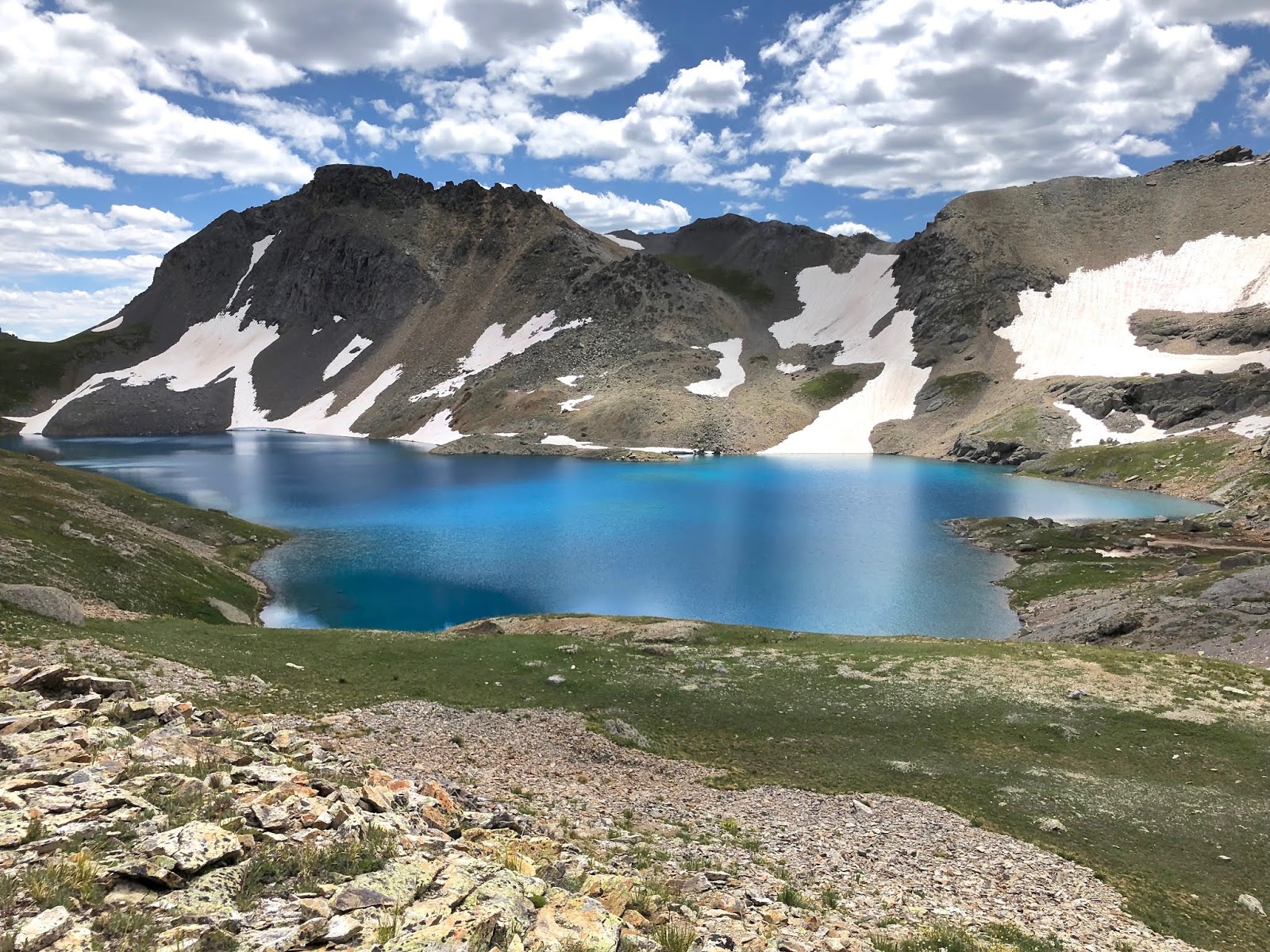 Time to turn around and head back. This time we took the lower route along the bench. 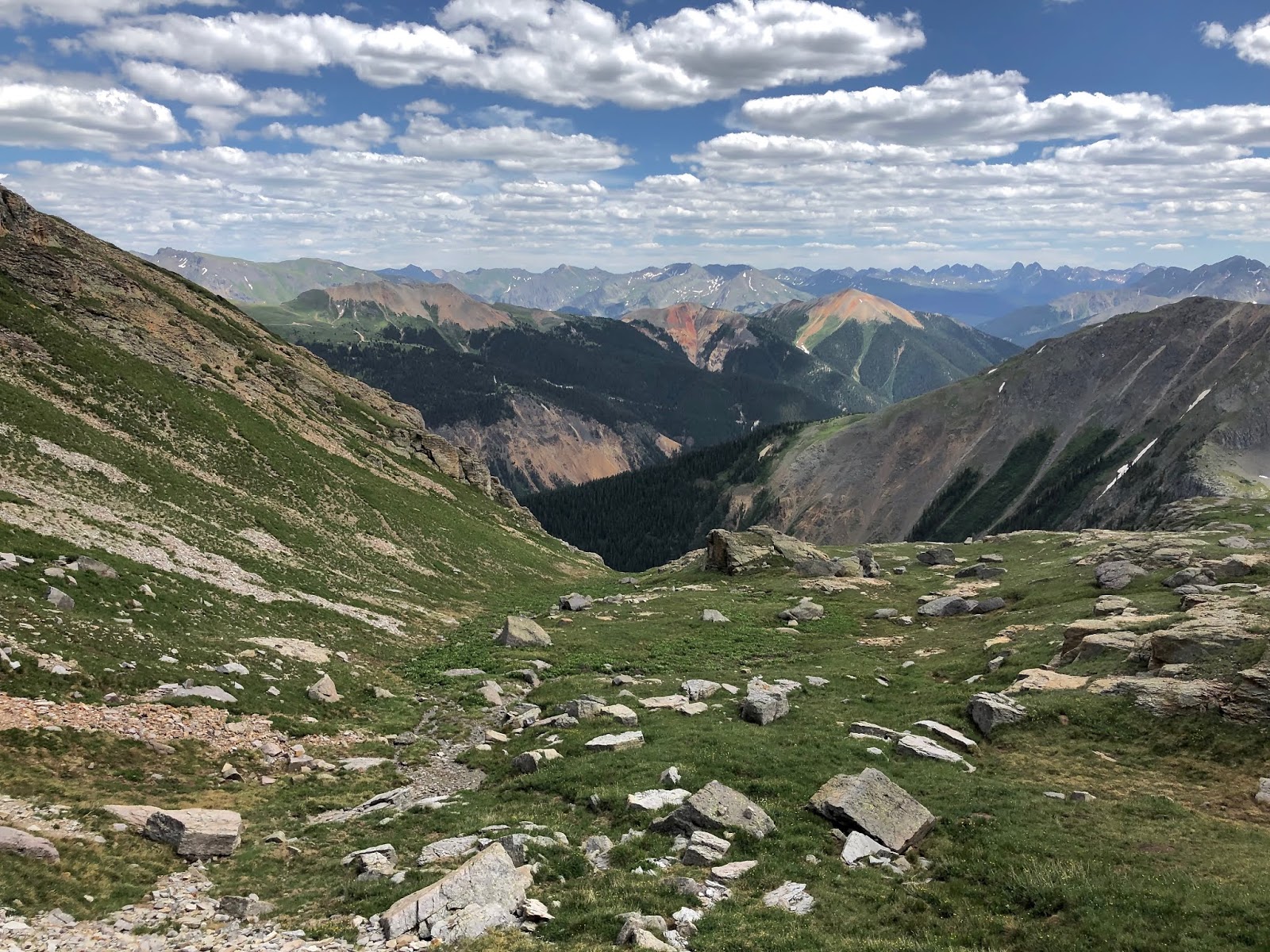 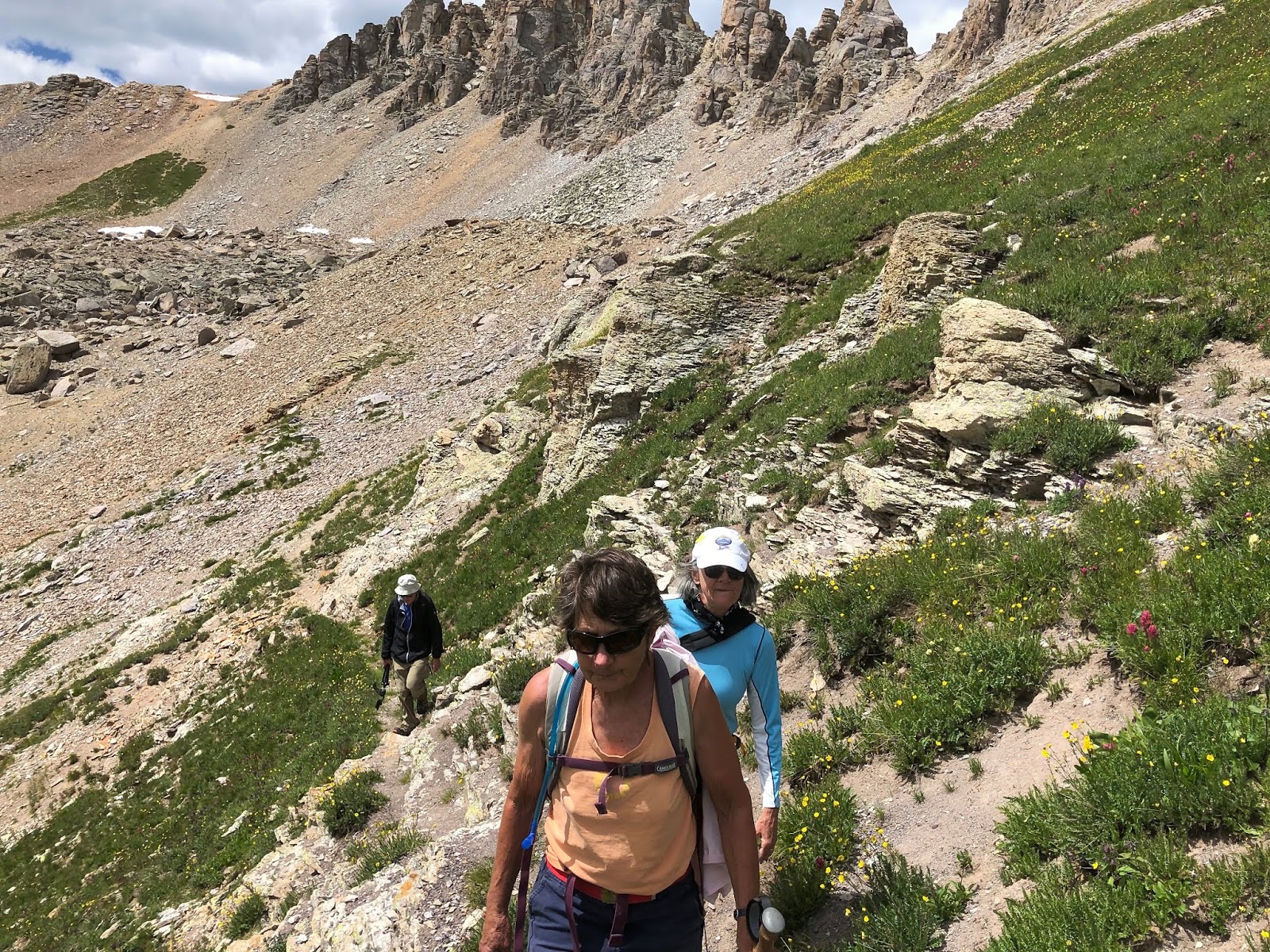 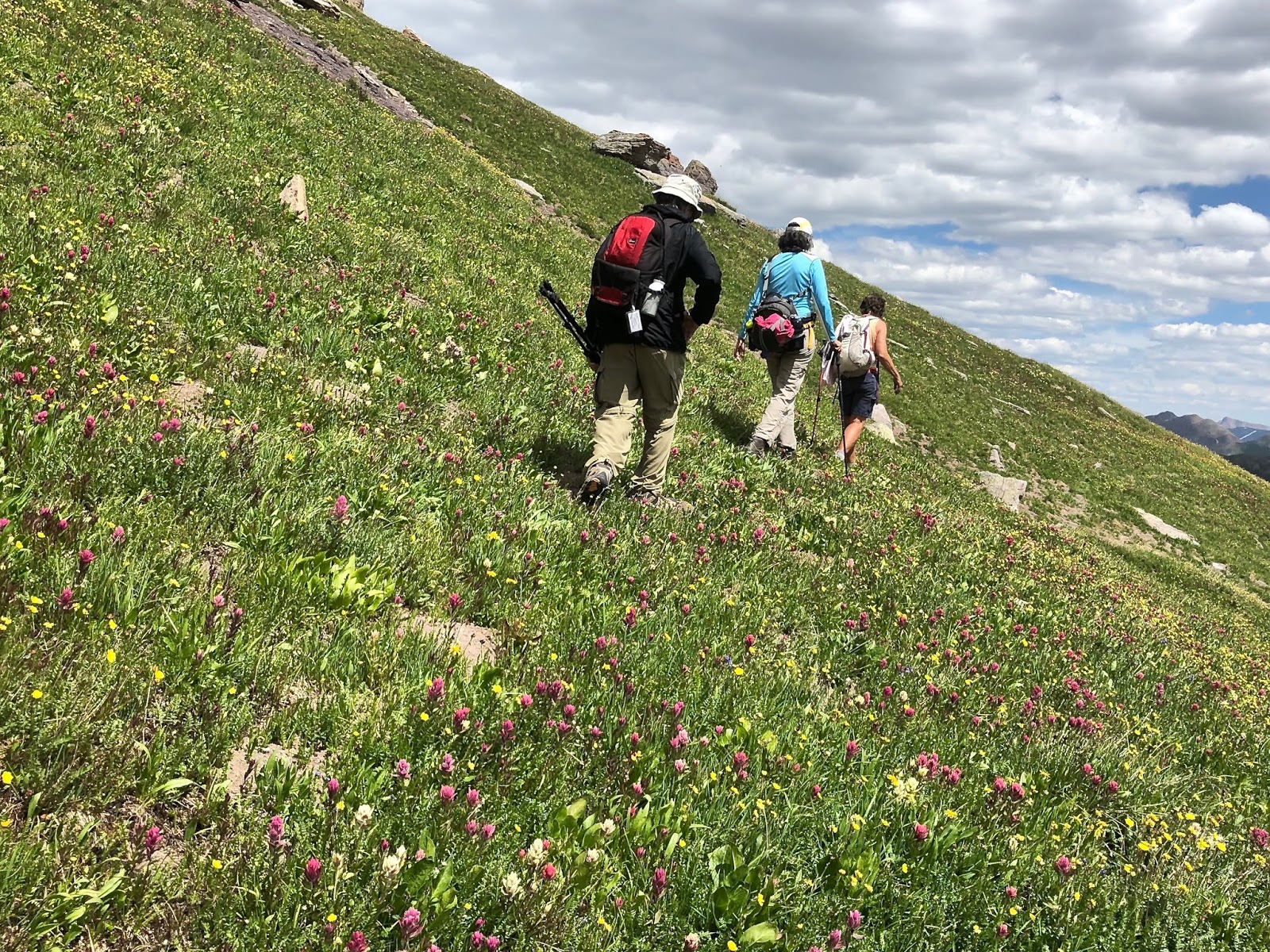 Suddenly, eagle-eye Bobbie shouts "STOP!" She's spotted the "promised" ptarmigan! It's summer plumage provides "natural camouflage" to blend in with alpine rocks. It would have been easy to miss her.

As winter approaches, the ptarmigan's speckled feathers molt and are replaced with solid white plumage that renders them nearly invisible on snow. This mama ptarmigan had at least 4 chicks scurrying for cover as we walked by.


We could see "rings" forming on the return hike down to Bullion King Lake. It had to be fish rising...hitting the surface for bugs. Sure enough...the last promise is kept. Cut Throat Trout...


And finally, a couple of short videos I took of the mama ptarmigan and one of her fleeing chicks...

Just another average summer day in Lovely Ouray...
Peace out,
mark and bobbie
Posted by Box Canyon Blog.com at 9:04 AM