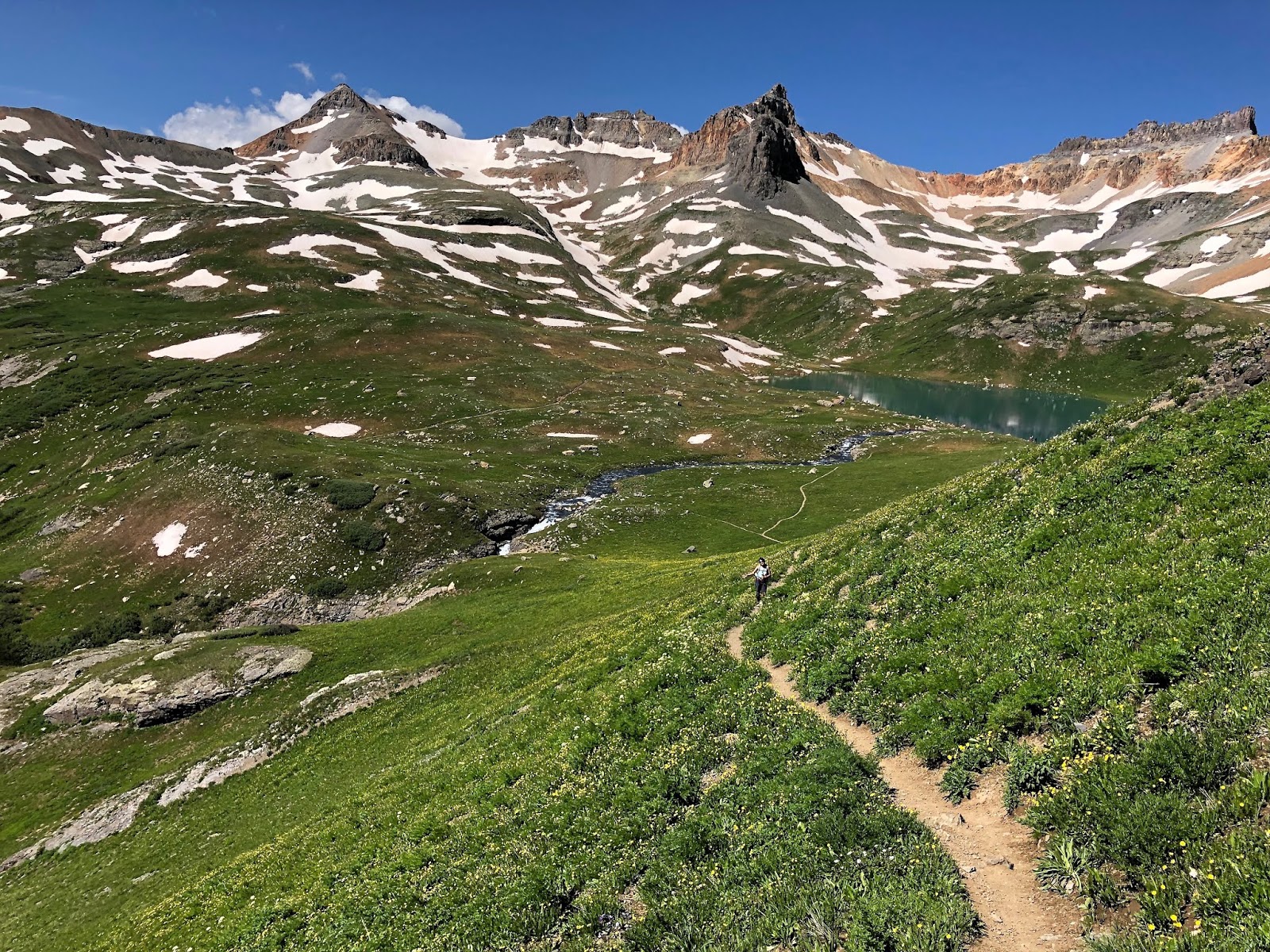 We decided to take advantage of back-to-back days with scant threat of thunderstorms. Legs and toes were only moderately sore the morning after summiting Abram. So, with no consequential excuses to stay home, we decided rise early and effectuate one of our all-time favorite hikes.

Travel Alert: The hike to Ice and Island Lakes has been "discovered," so it's no longer a good choice if one is in the market for people-less solitude. There were moments back in the good old days when our collective gaze was only thing resting on those magnificent-beyond-belief turquoise lakes. Alas and alack, not anymore. Thus, it is advisable to get an early start...around 6 AM should help considerably as most tourist hikers don't get started till late morning. We hit the trail around 7:30 AM and had "company" most of the way up...even a few early risers coming down. One more thing: It takes sun and mostly blue skies for the lakes to shimmer like gems. As soon as a cloud blocks the sun, the "gem-show" is over and they look like just any other glassy lake...as in clear. 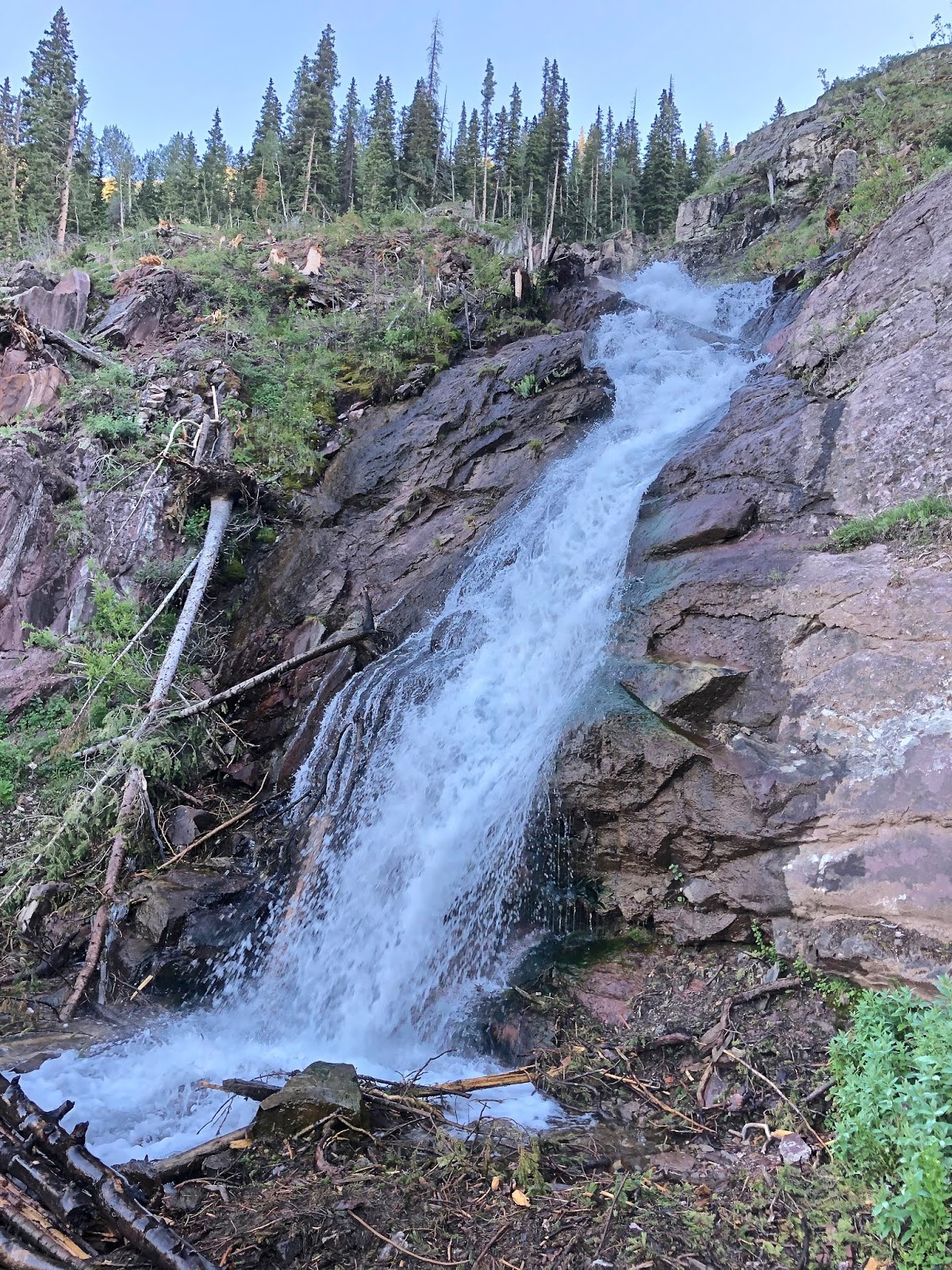 Not a hundred yards from the car, we heard the familiar roar of a waterfall. It was running a little hard for this late in the year, so I'd hate to have crossed it back in June/July. But something else was different, this time it appeared somewhat "naked." Hey, didn't this use to be surrounded by forest? As the gushing creek and falls came into view we discovered why. Avalanche!

Take a few seconds to view this video. Note all the tumbled trees laid out at the bottom, they were up around our trail till avalanches swept them away this past winter. Be sure to turn up your speakers...


After negotiating the stream crossing on wet, slippery logs, we encountered a group of six or seven boys on the other side. They looked to be high school age and said they hailed from Farmington, New Mexico. One of them inquired if this was the trail to Ice Lake. We turned them around and headed them the right direction. As they sped off I yelled, with some bravado, I might add, "Don't let a couple old geezers catch you on the steep section."

Remarkably, our legs and lungs were feeling no ill-effects from yesterdays Abram ascent. The morning air was fresh and cool and we made good time...stopping only to pee. :) 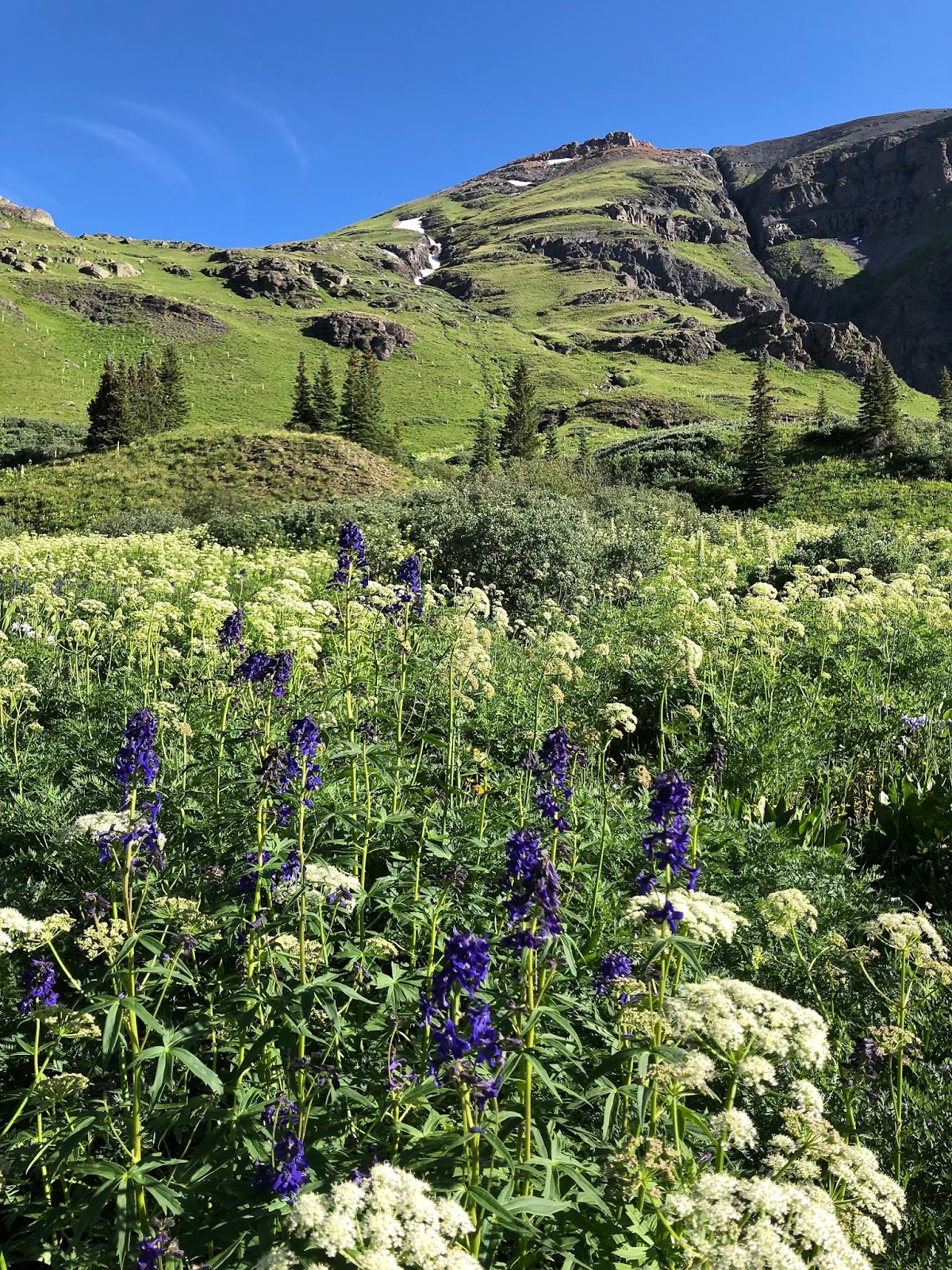 One of the main reasons to put this hike off till mid-July is the super-abundance of wildflowers along the way. We encountered a bumper crop in the lower basins, while paintbrush was conspicuously absent in the upper. Still, the columbine more than made up for it. 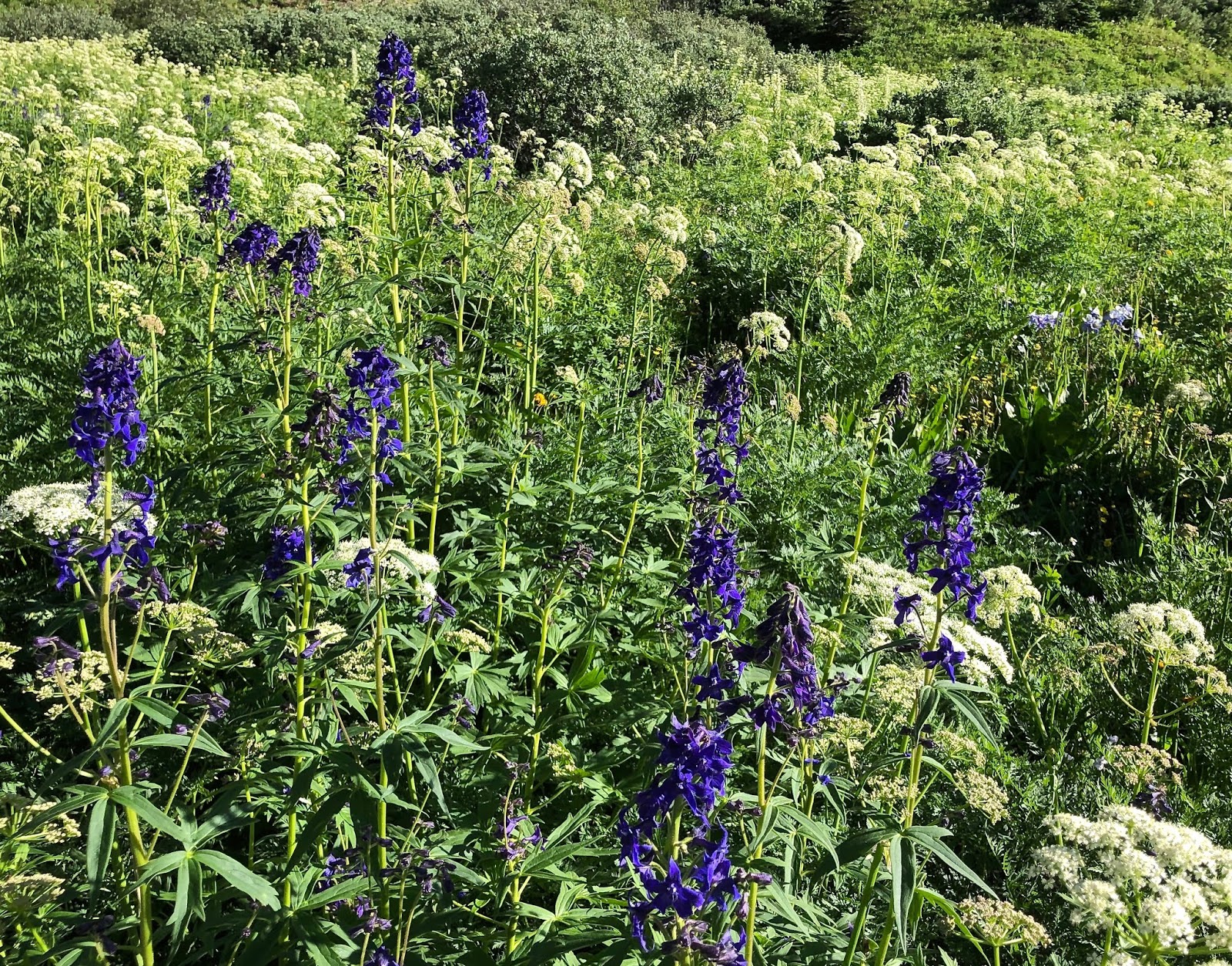 It wasn't long till, on a steep section as I predicted, we caught up to the "boys," resting by the trail. Some of them looked pretty whipped and asked how much farther to the lake. You should have seen their faces when we told them that they were only about a third of the way there, and that this was the easy part. The hardest section is at the end...a long steep section above timberline.

Don't worry, I challenged as we sailed by. You'll catch us on the flats between basins. 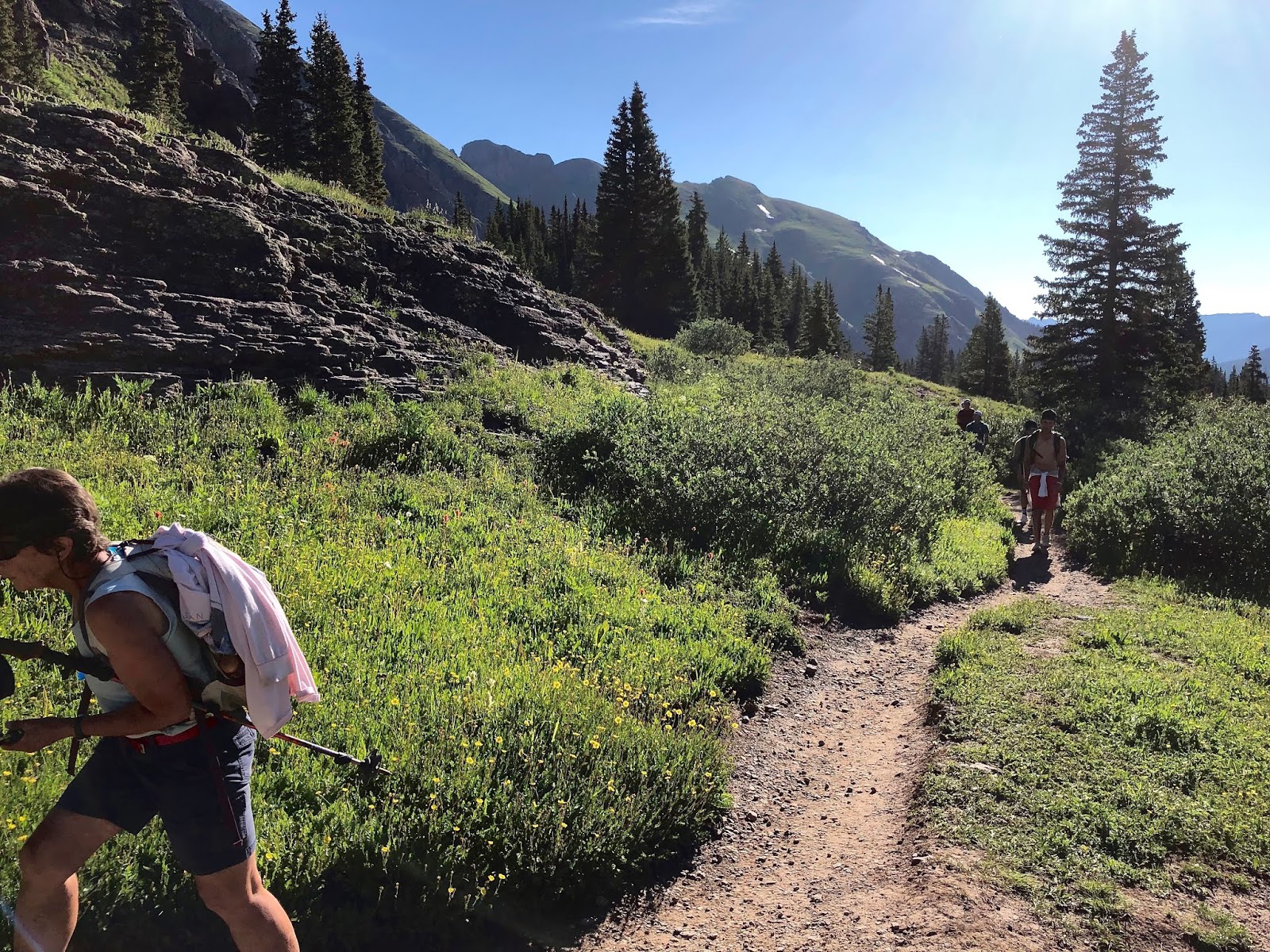 Sure enough, on a flat section between "levels," we heard the "boys" coming up behind us.
I whispered to Bobbie, Let's push em a little. 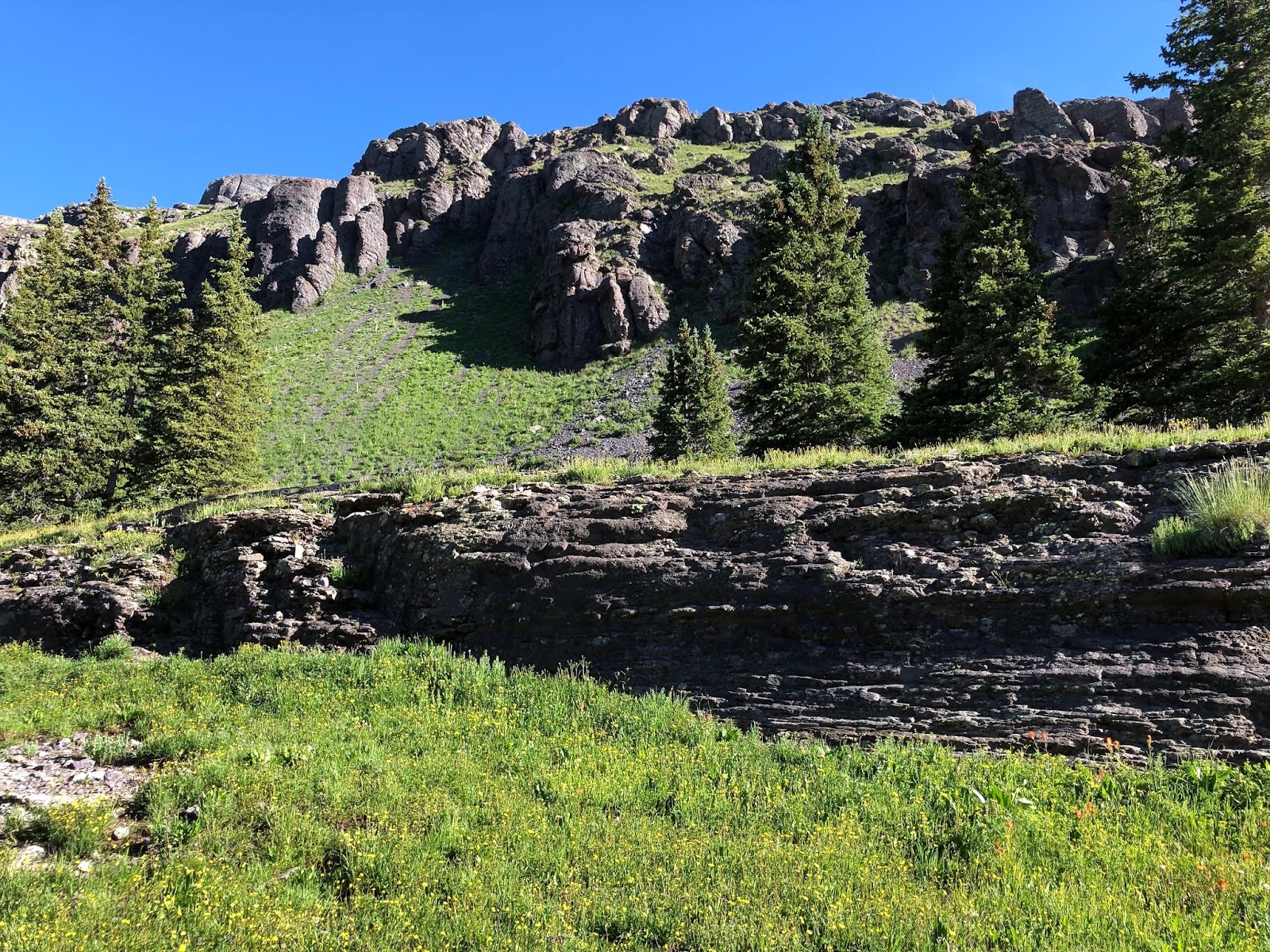 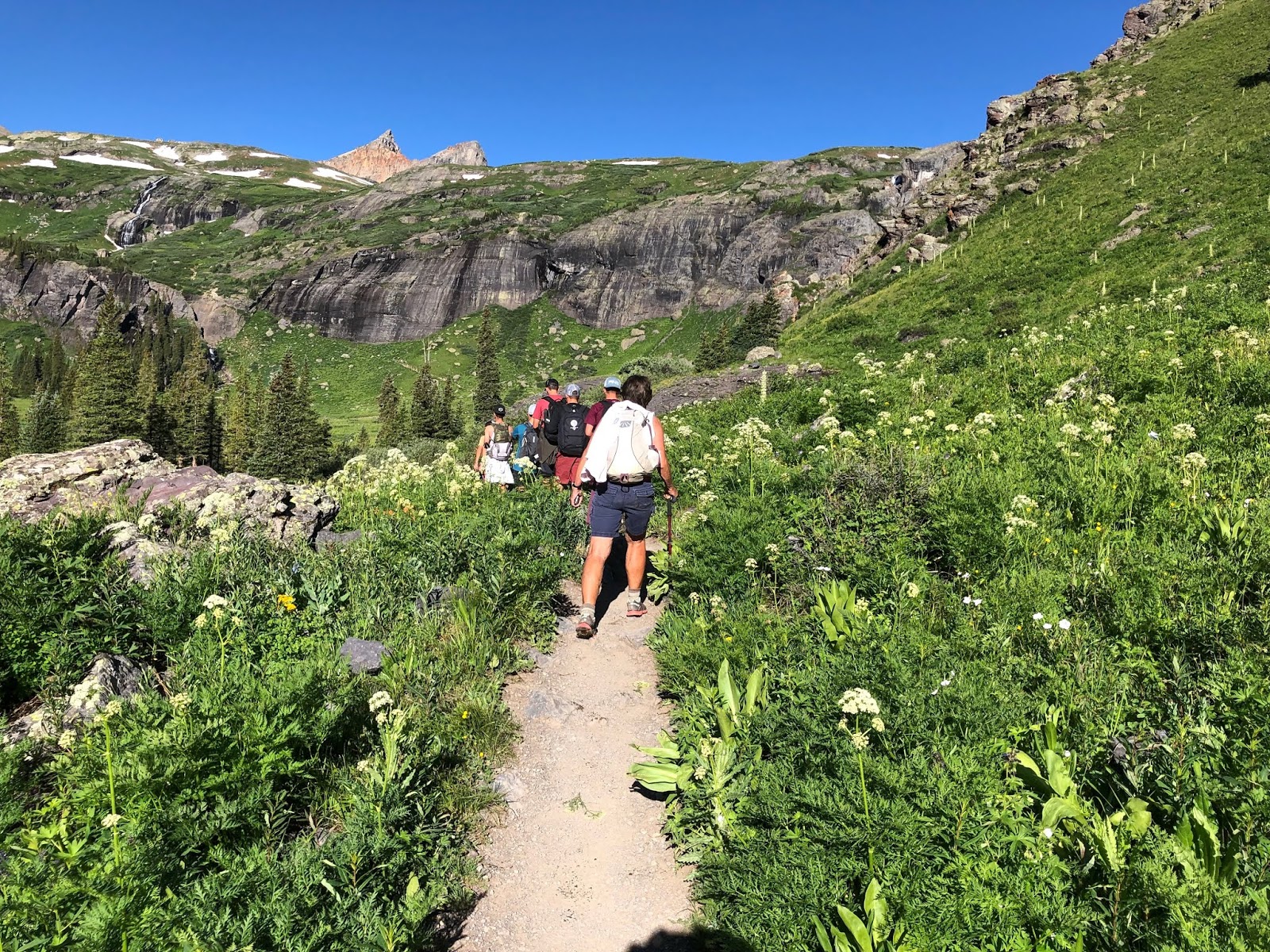 It took a while, but they finally past us...only because of a much need pee stop. As they sped by I issued another challenge: Don't let a couple geezers catch and pass you on that next steep section.  :) 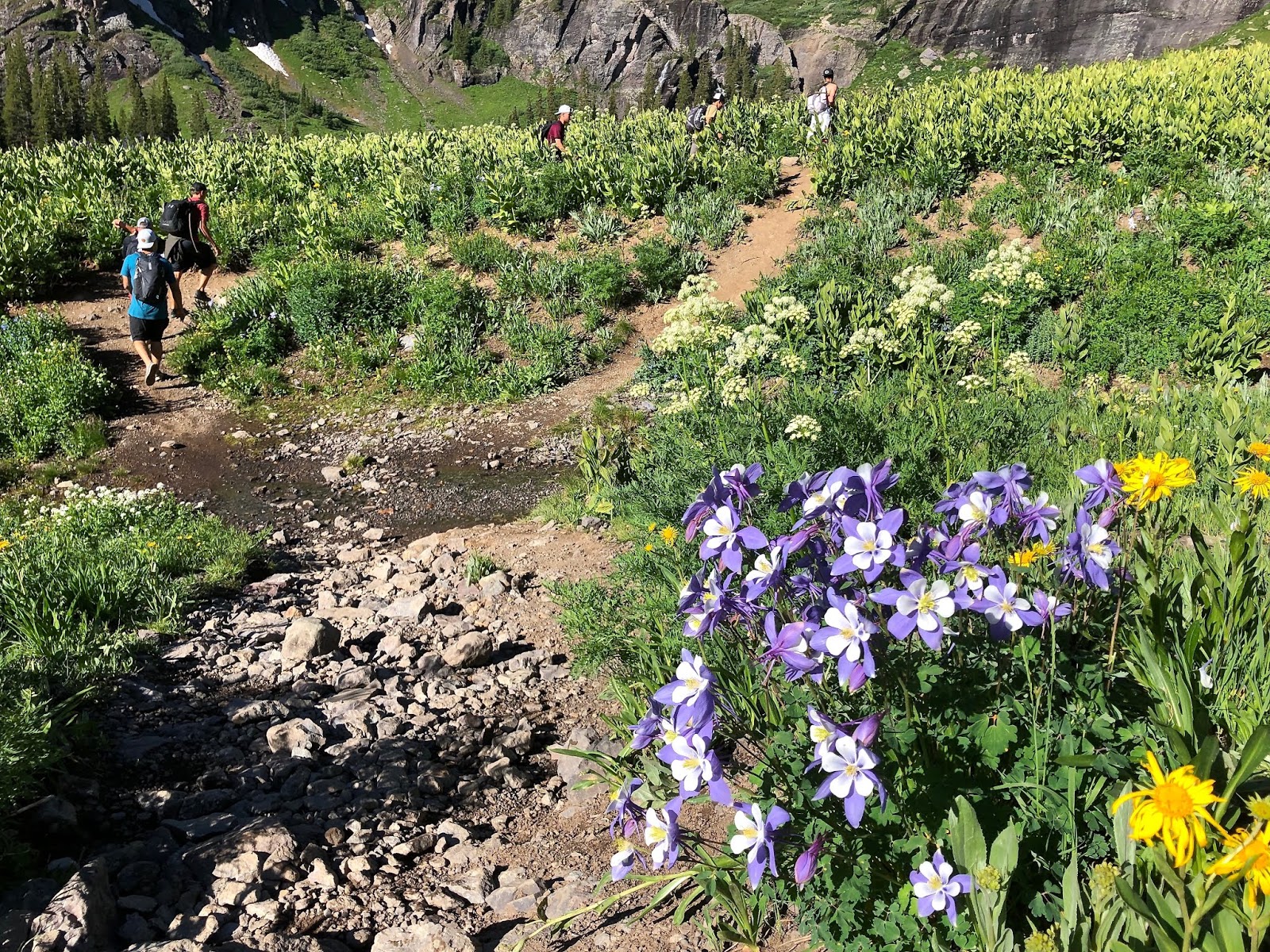 As it turns out, we caught the "boys" before the steep section as they futilely searched for a way to cross the raging creek without getting their Nikes wet. They watched as we rock-hopped across with little regard for wet feet and decided to follow our example. A half mile later we could hear them closing in on us...trying to converse while gasping for air.

Another whisper to Bobbie: We're not going to let them pass us, are we?  Hee hee. 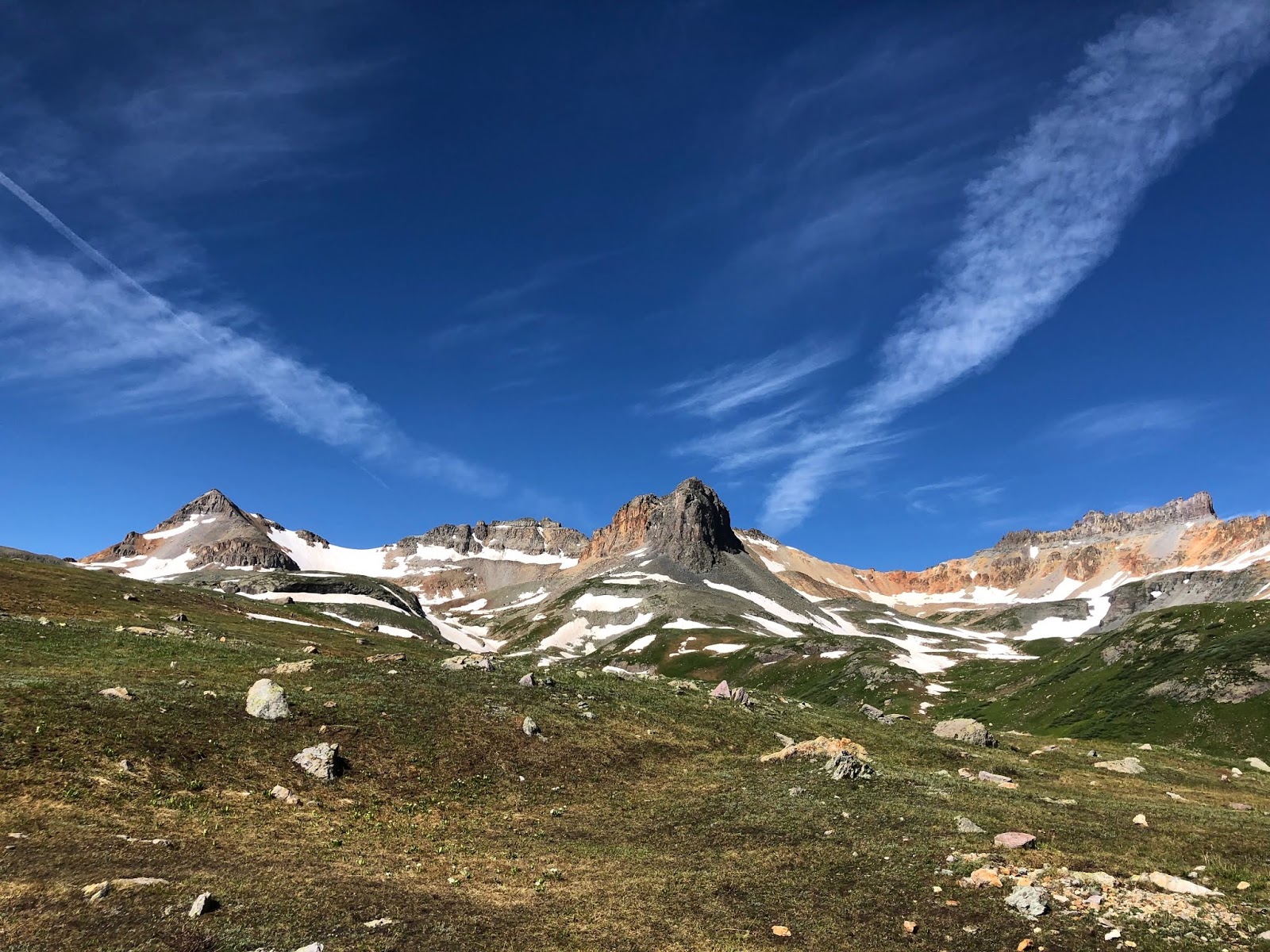 Winded, sweated, legs shaken, I shed my pack and plopped my no-longer-cute ass down by water's edge. A few minutes later Bobbie rolled in...ahead of the "boys," who appeared gassed. Thanks to my big mouth and the boys, we got a new PR to Ice Lake. You can find motivation in the strangest places...if you look for it. 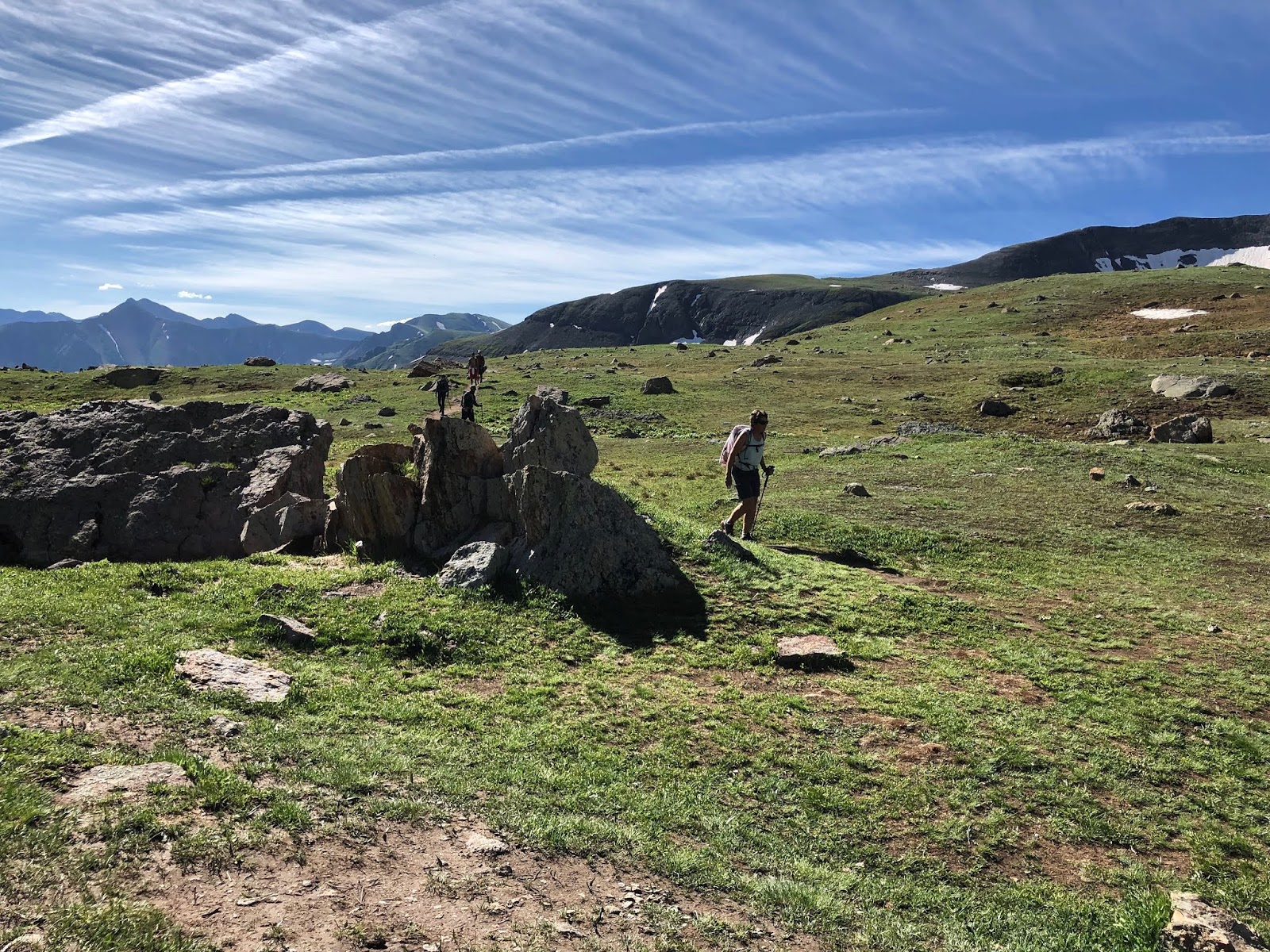 Earlier on I had also challenged the "boys" to take a plunge in Ice Lake. It seemed to catch them off guard: Uh, maybe... 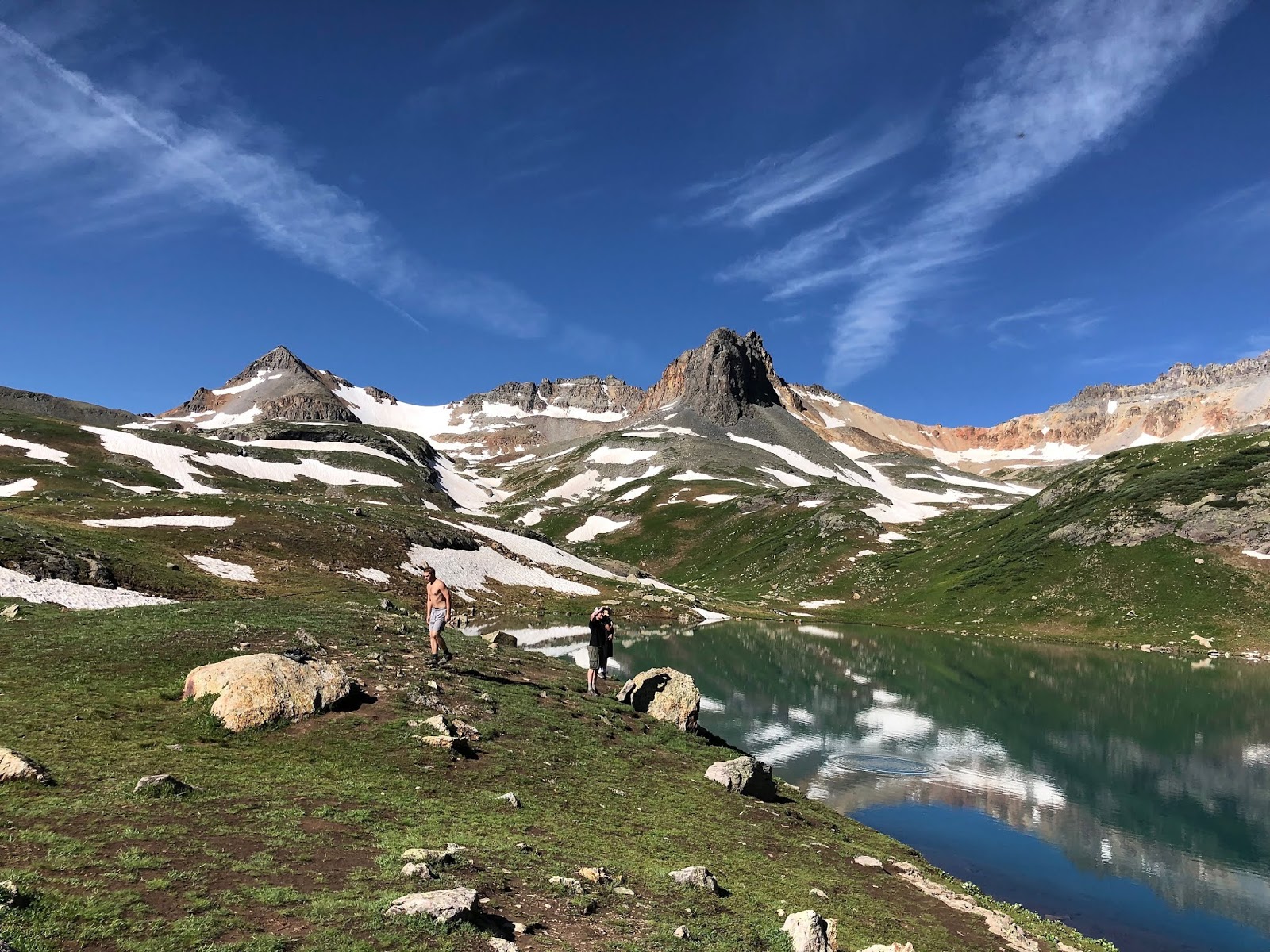 After a brief rest, we headed on up to Ice Lake...which required yet another stream crossing and another climb up to a higher basin...

This, is why Ice Lake is among our favorite hikes... 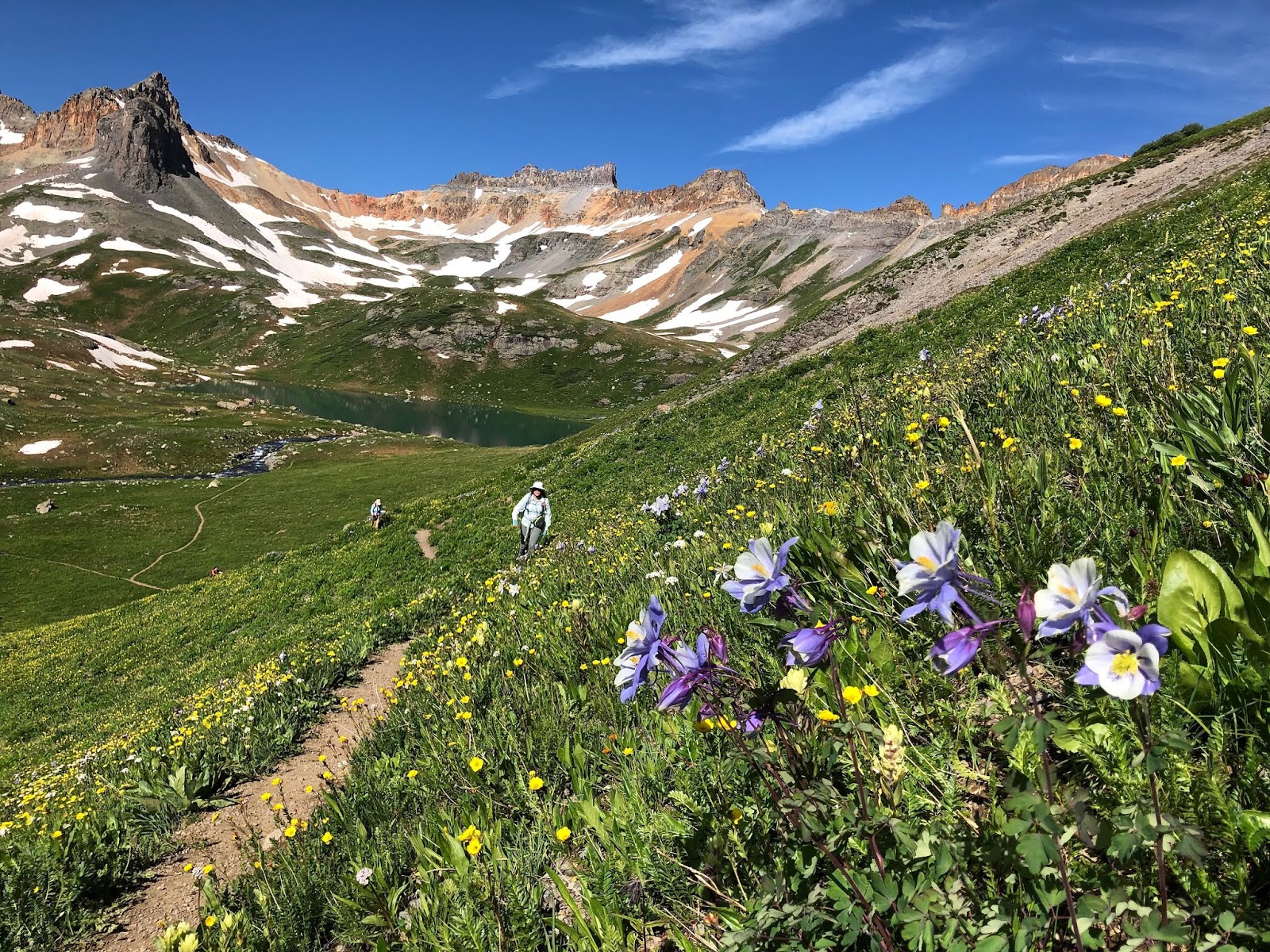 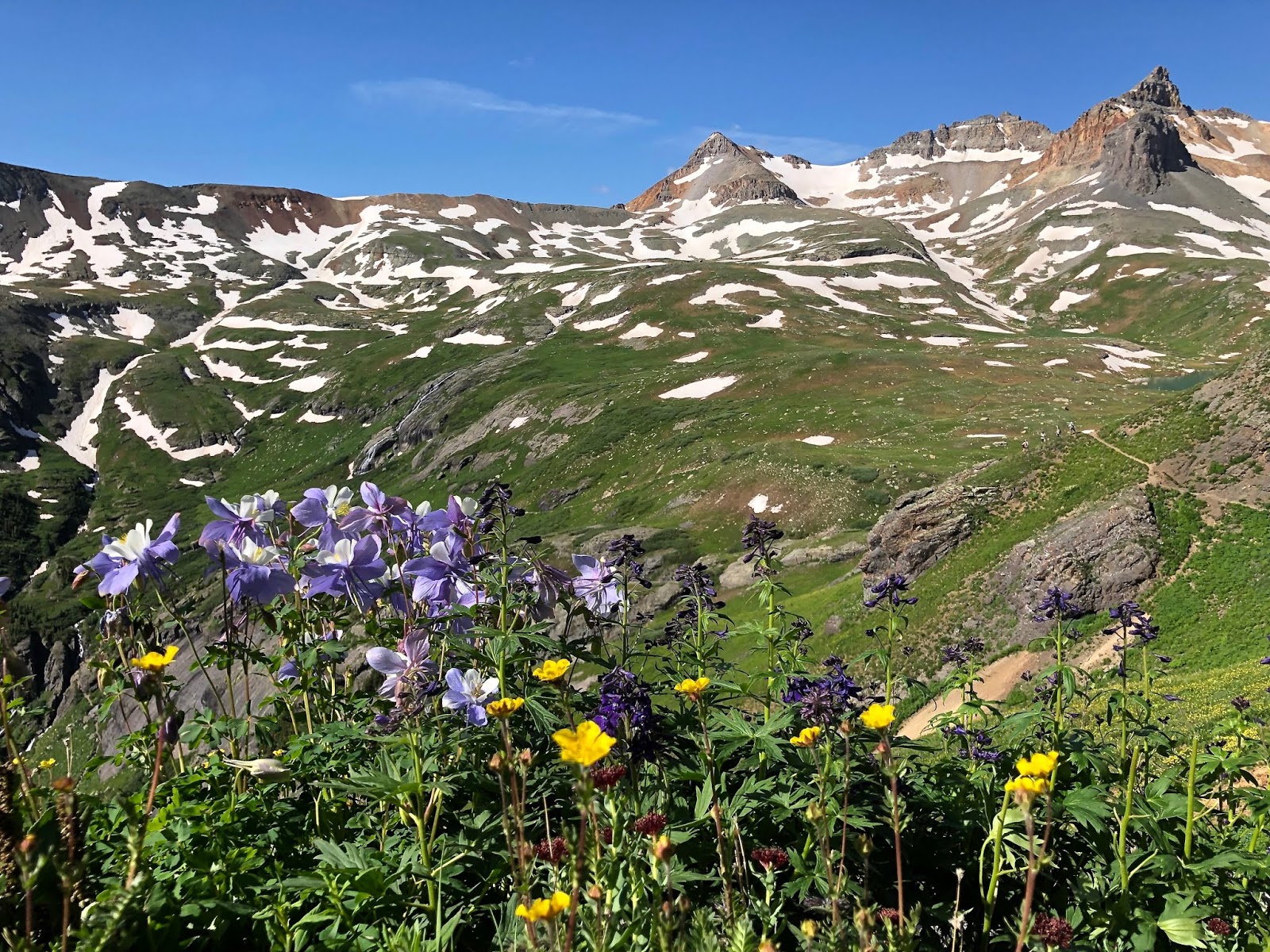 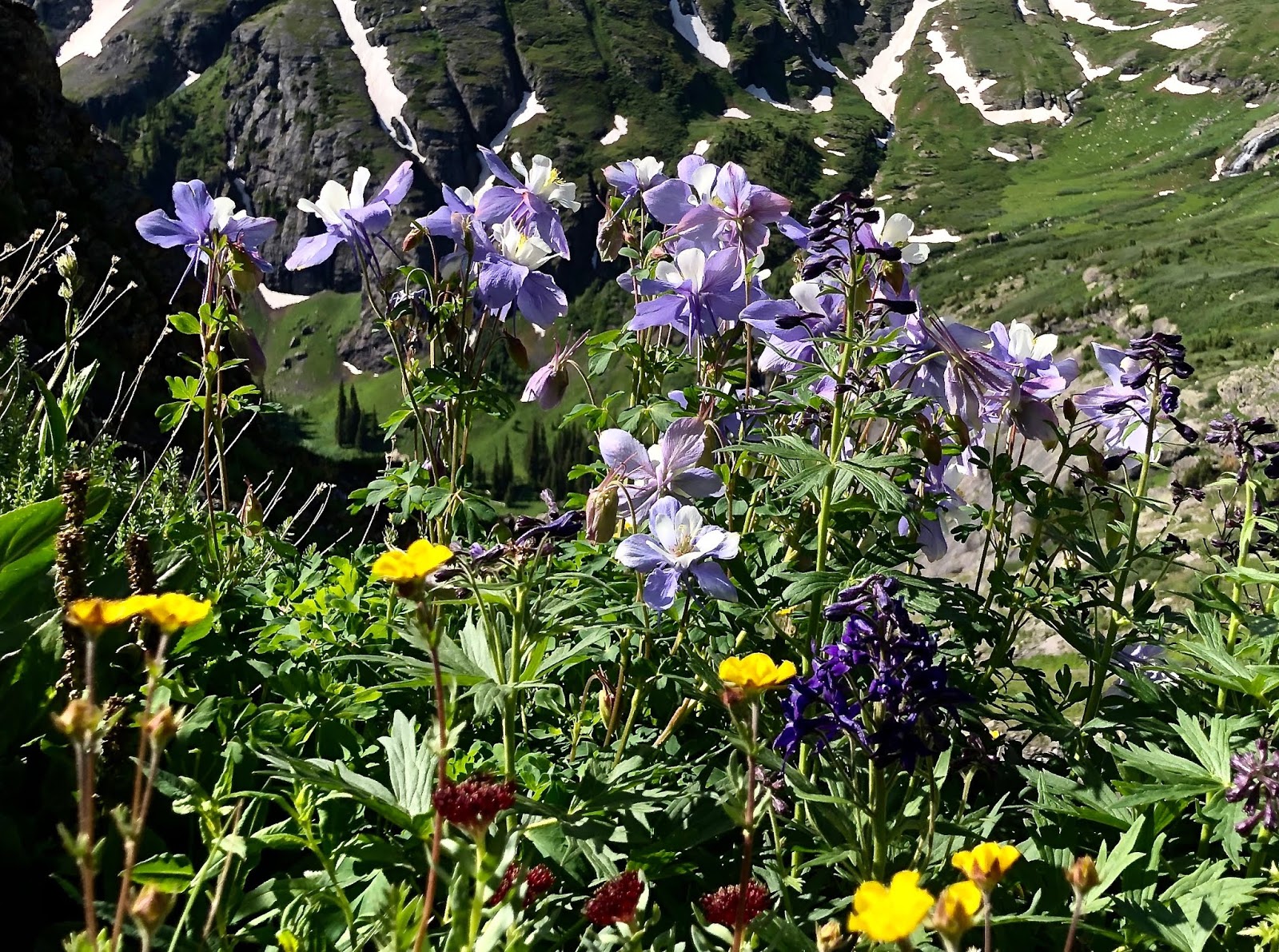 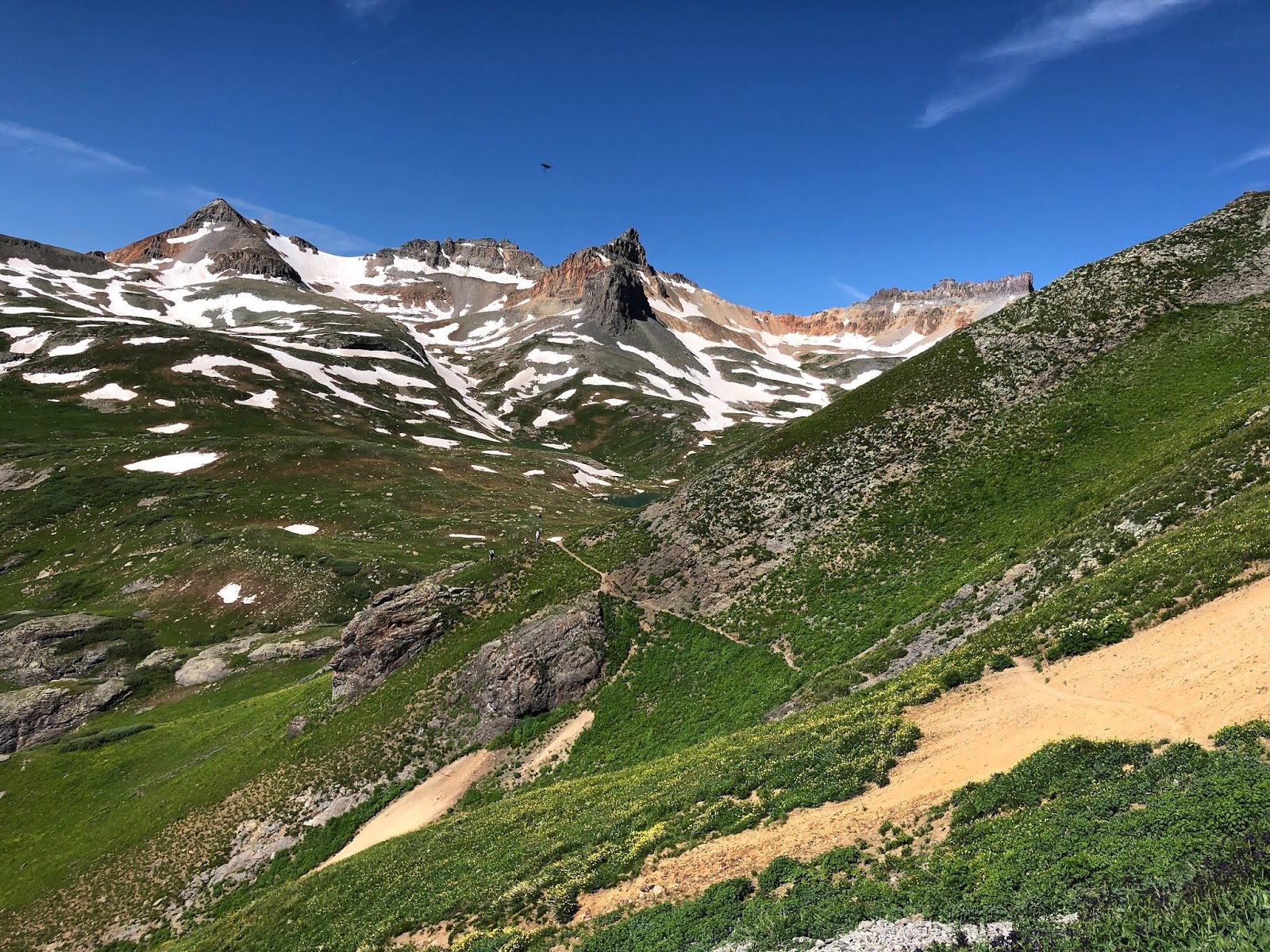 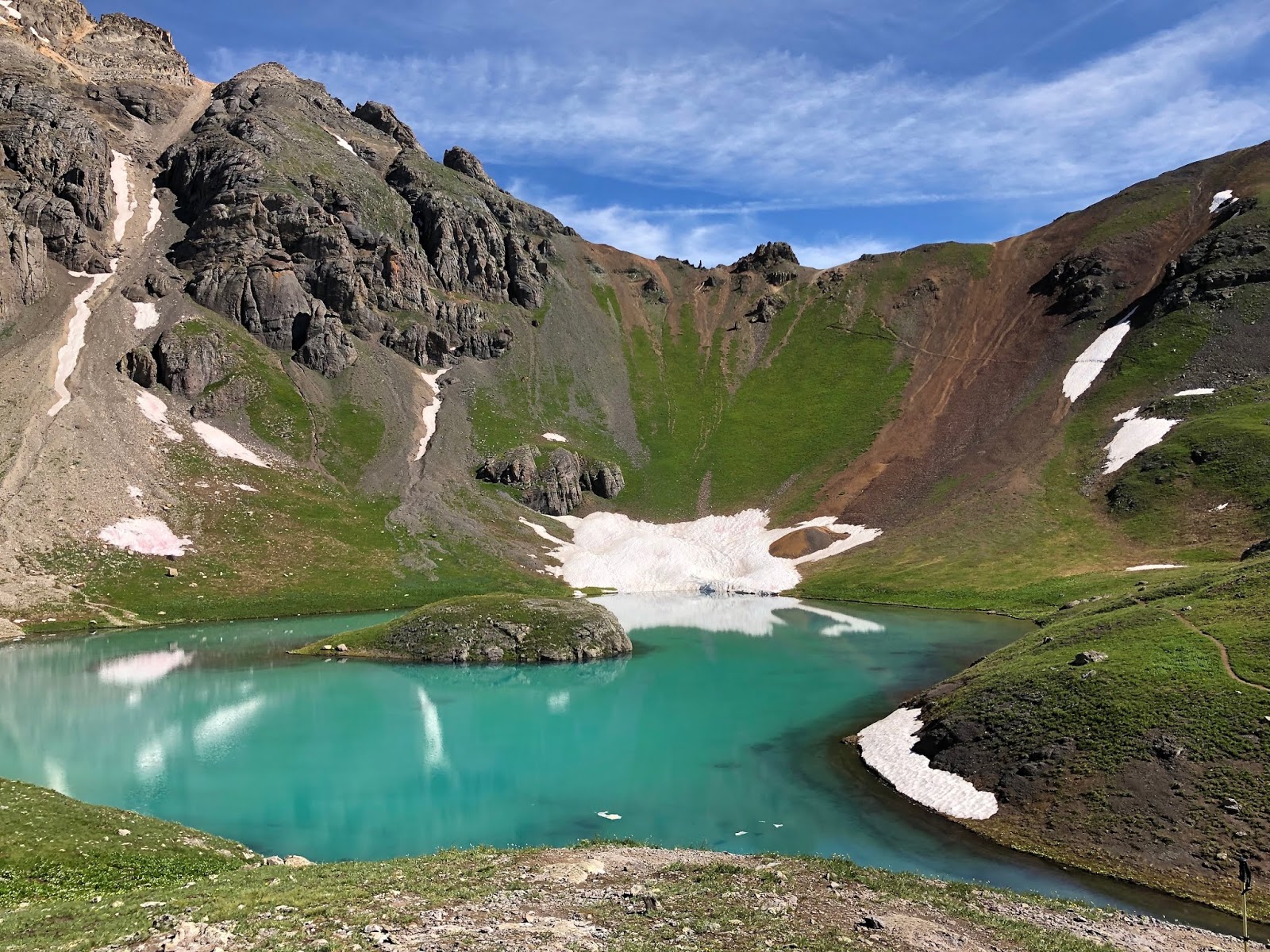 And the aptly named, Island Lake...a tad greener than Ice Lake, don't you think? Note the trail switchbacking up through reddish scree on the far side of the lake. It's part of the route used in the Hardrock 100 race out of Silverton (tho it was cancelled this year due to too much snow). 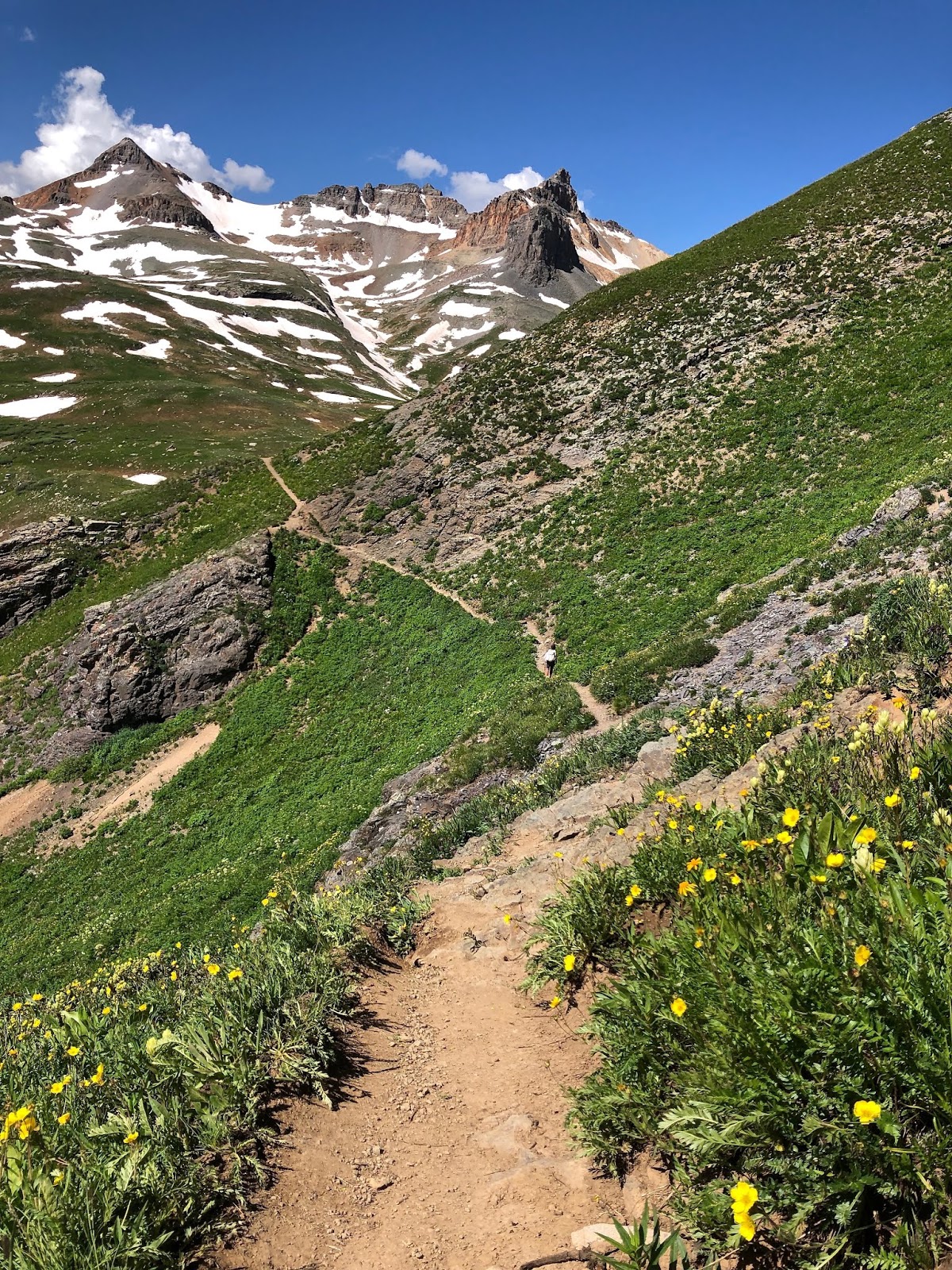 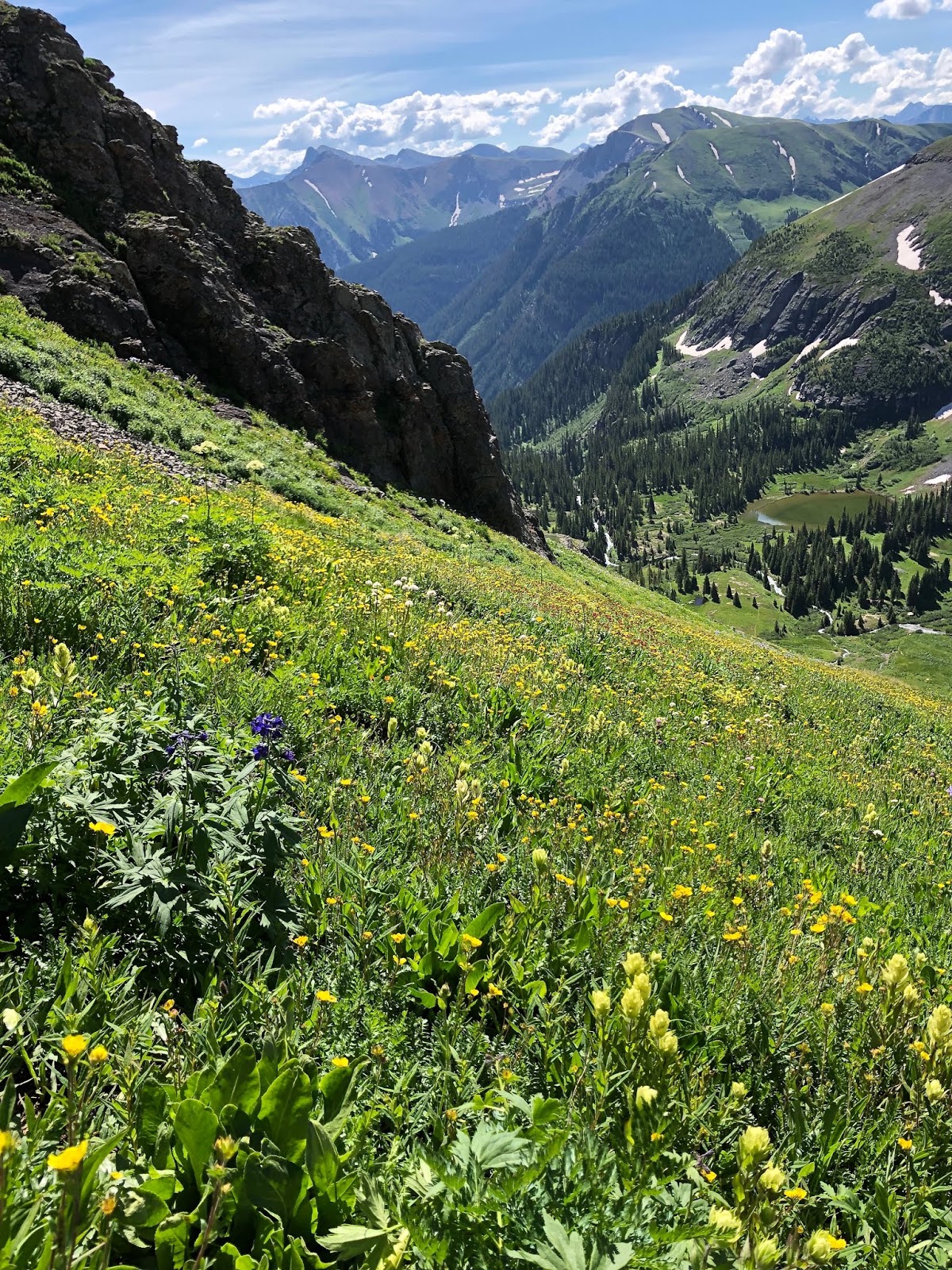 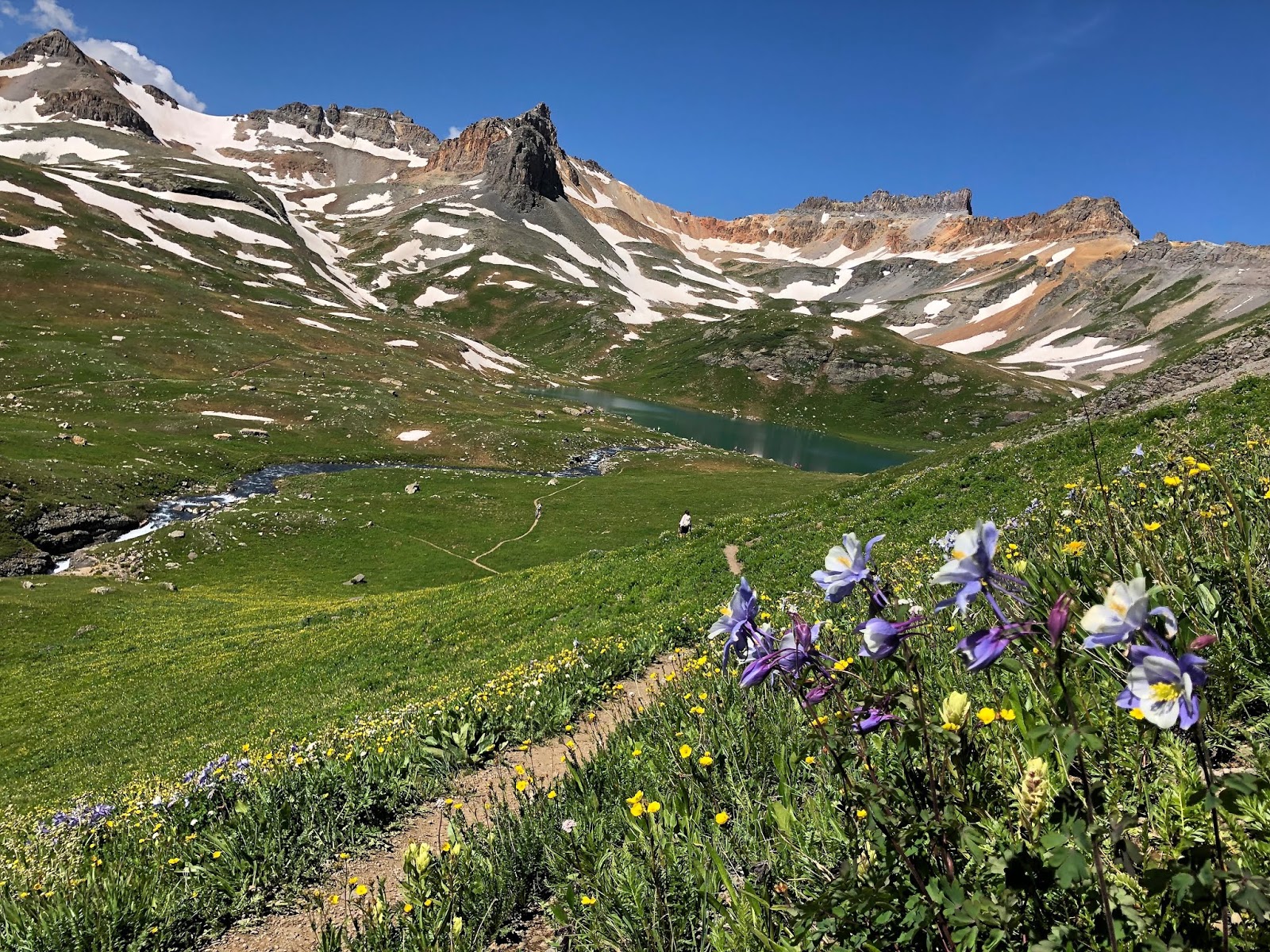 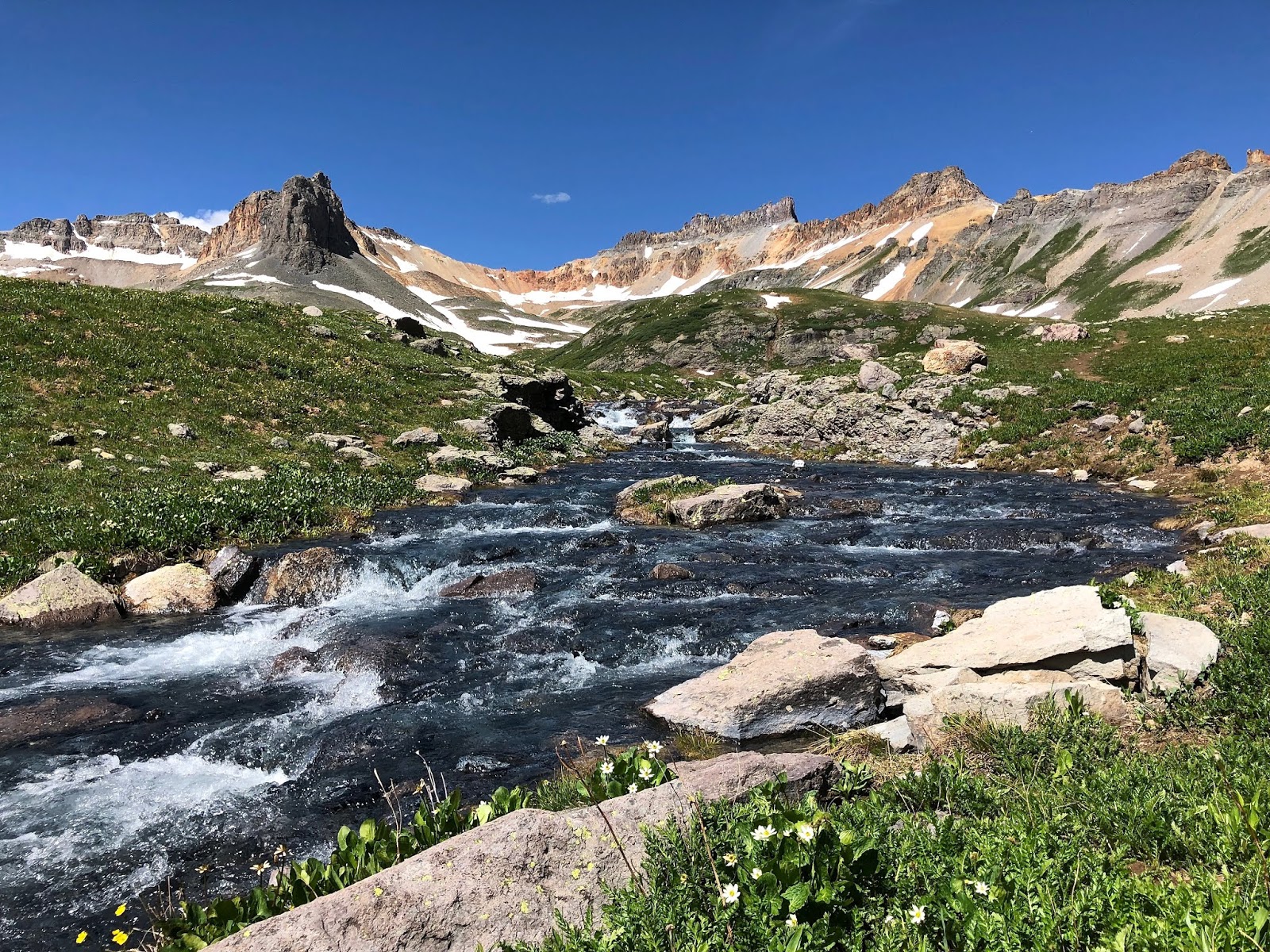 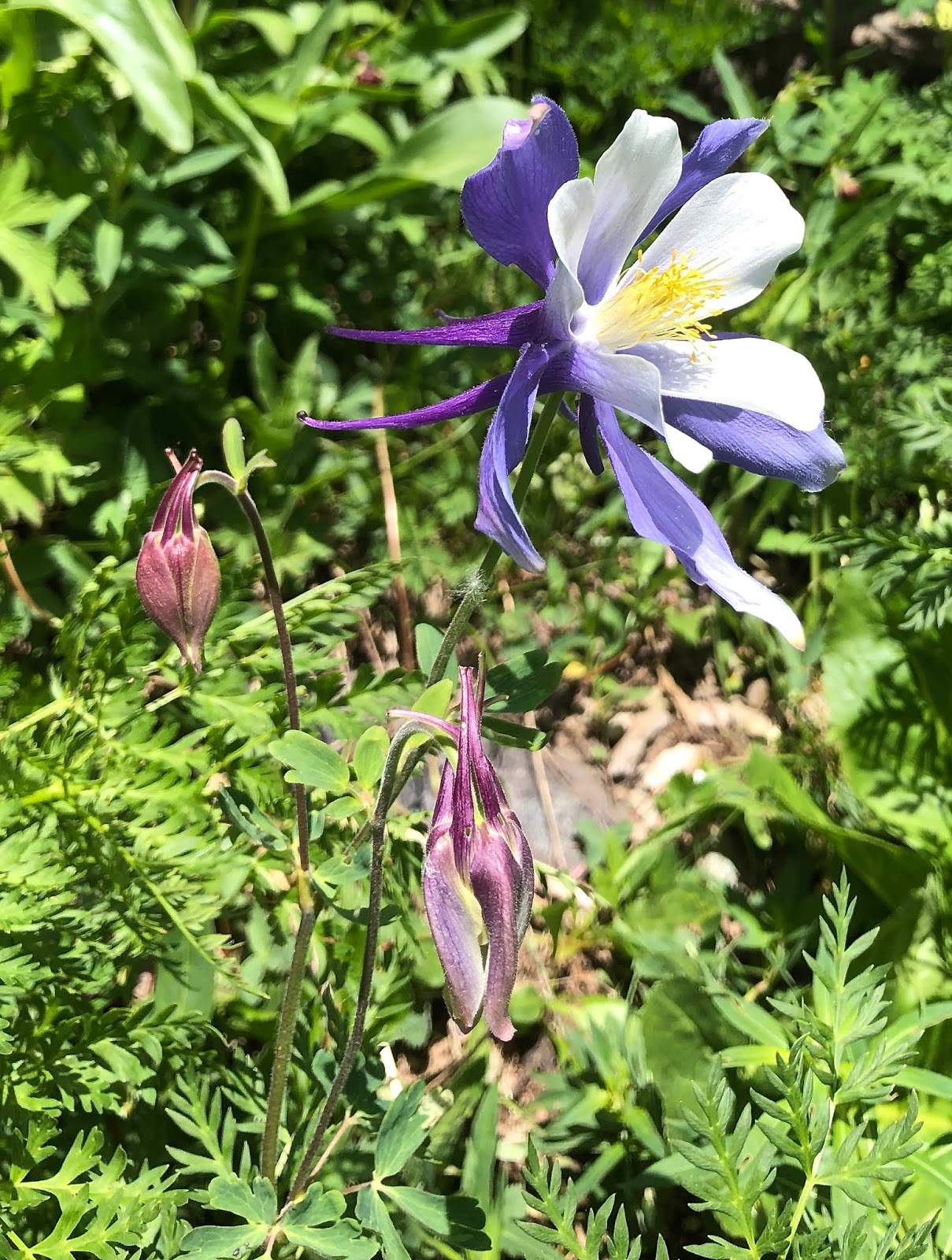 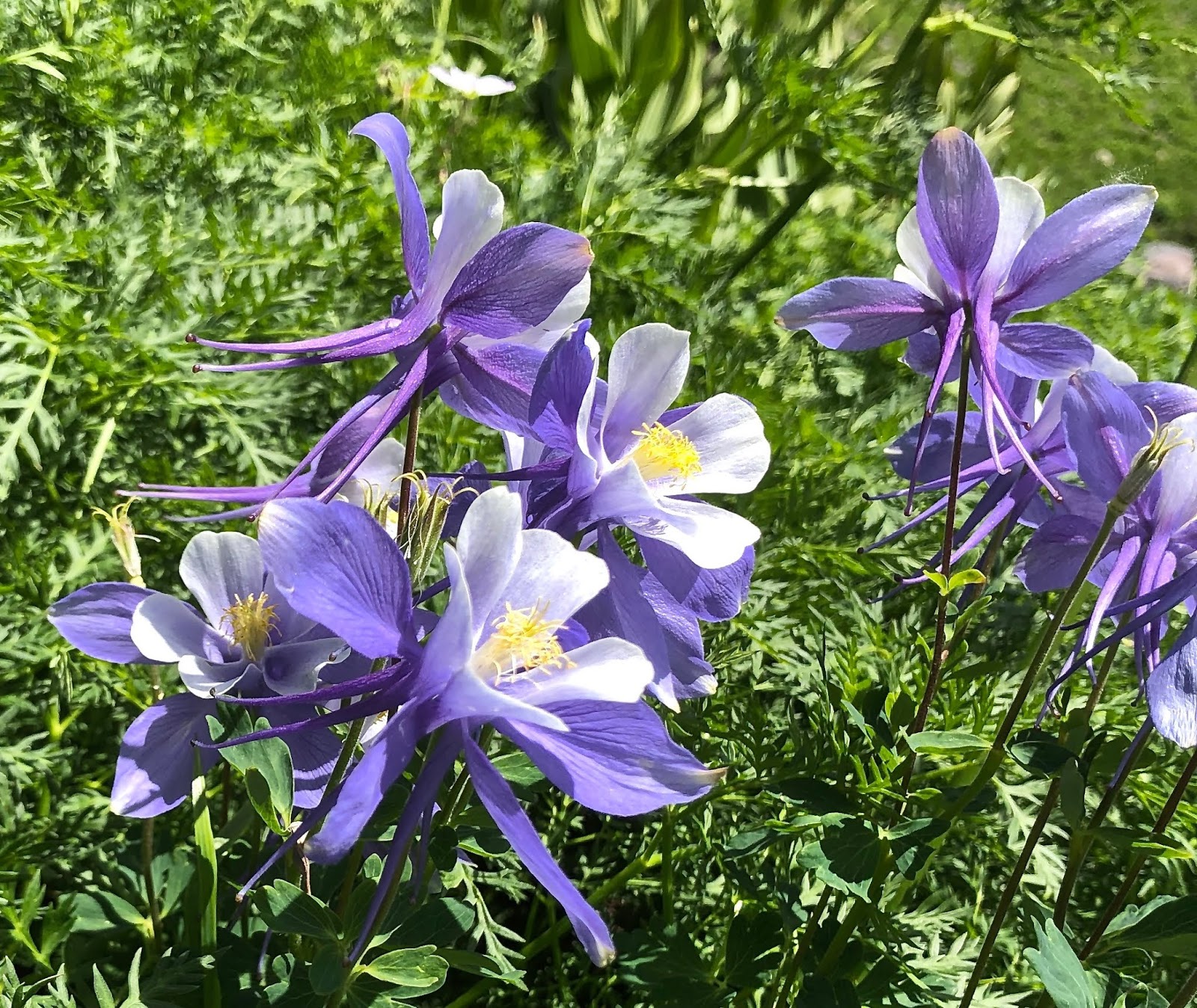 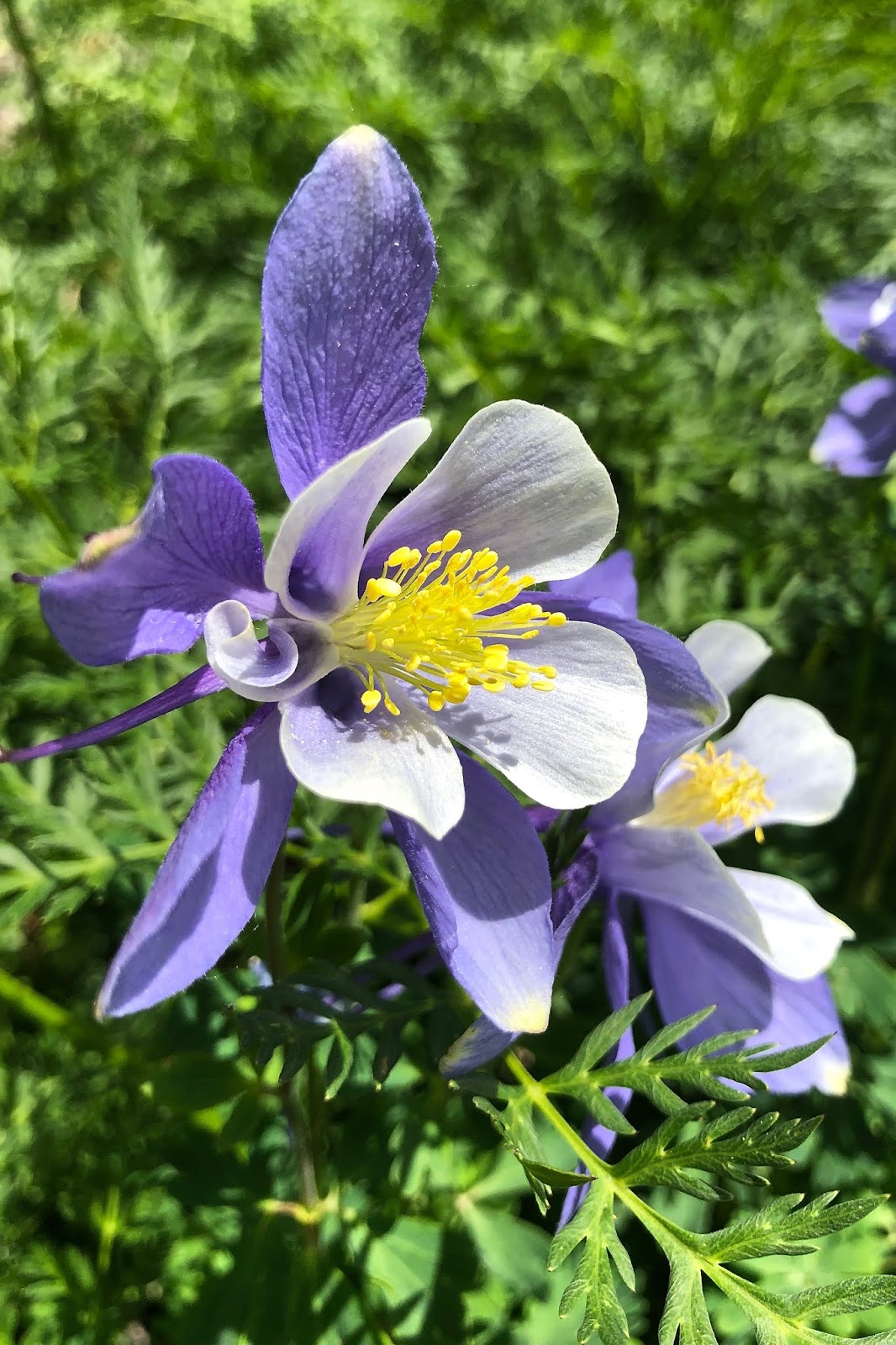 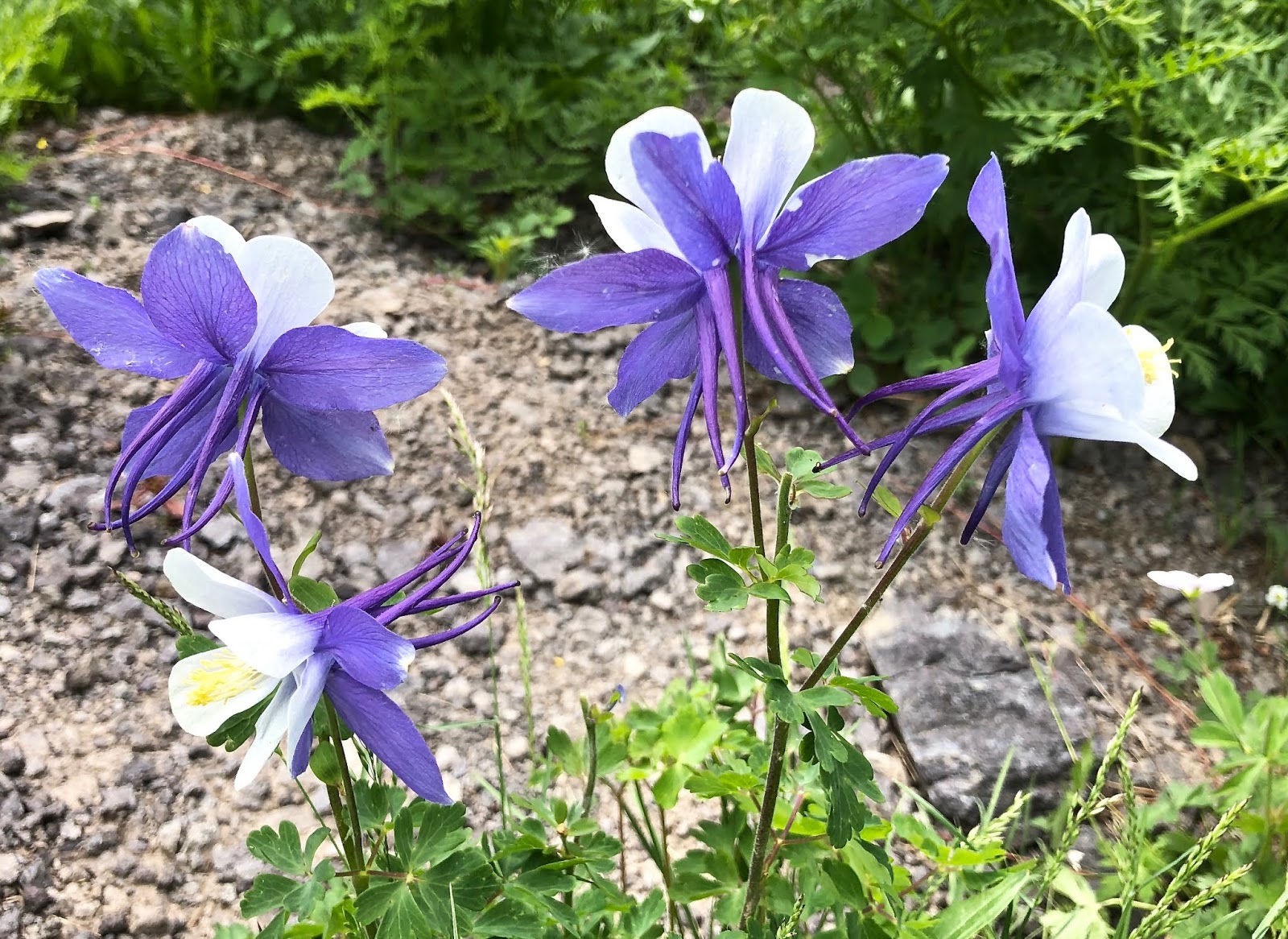 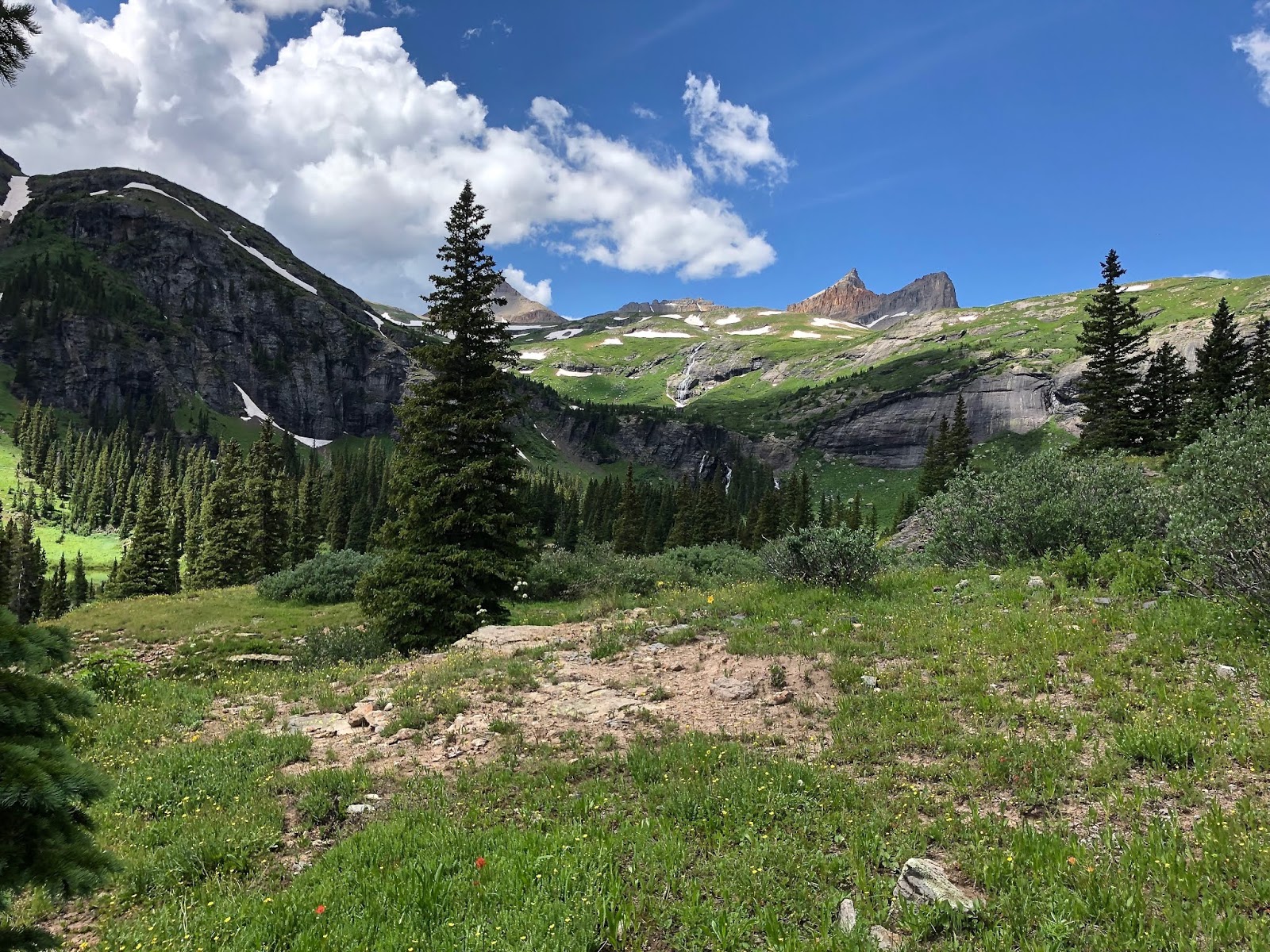 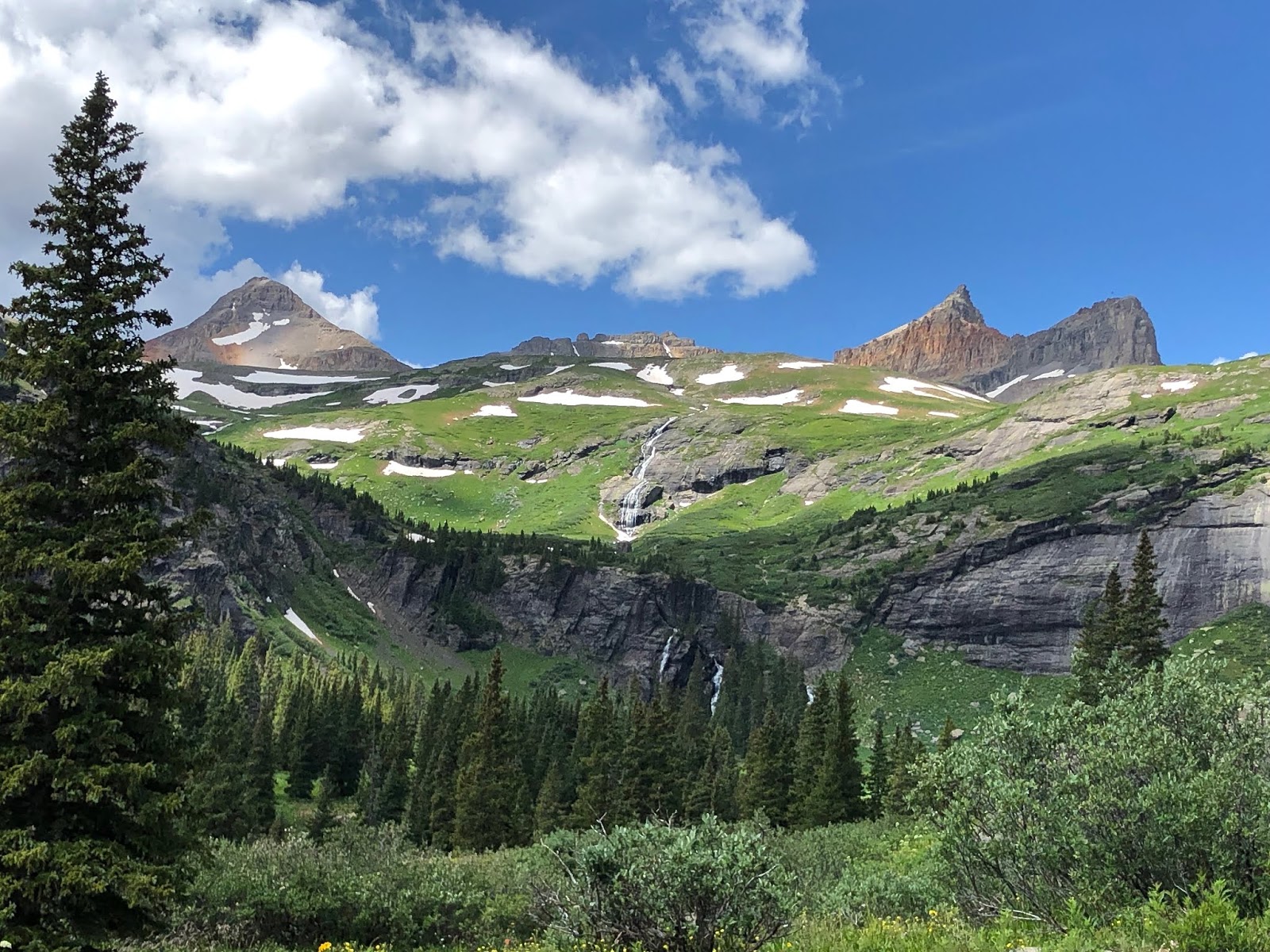 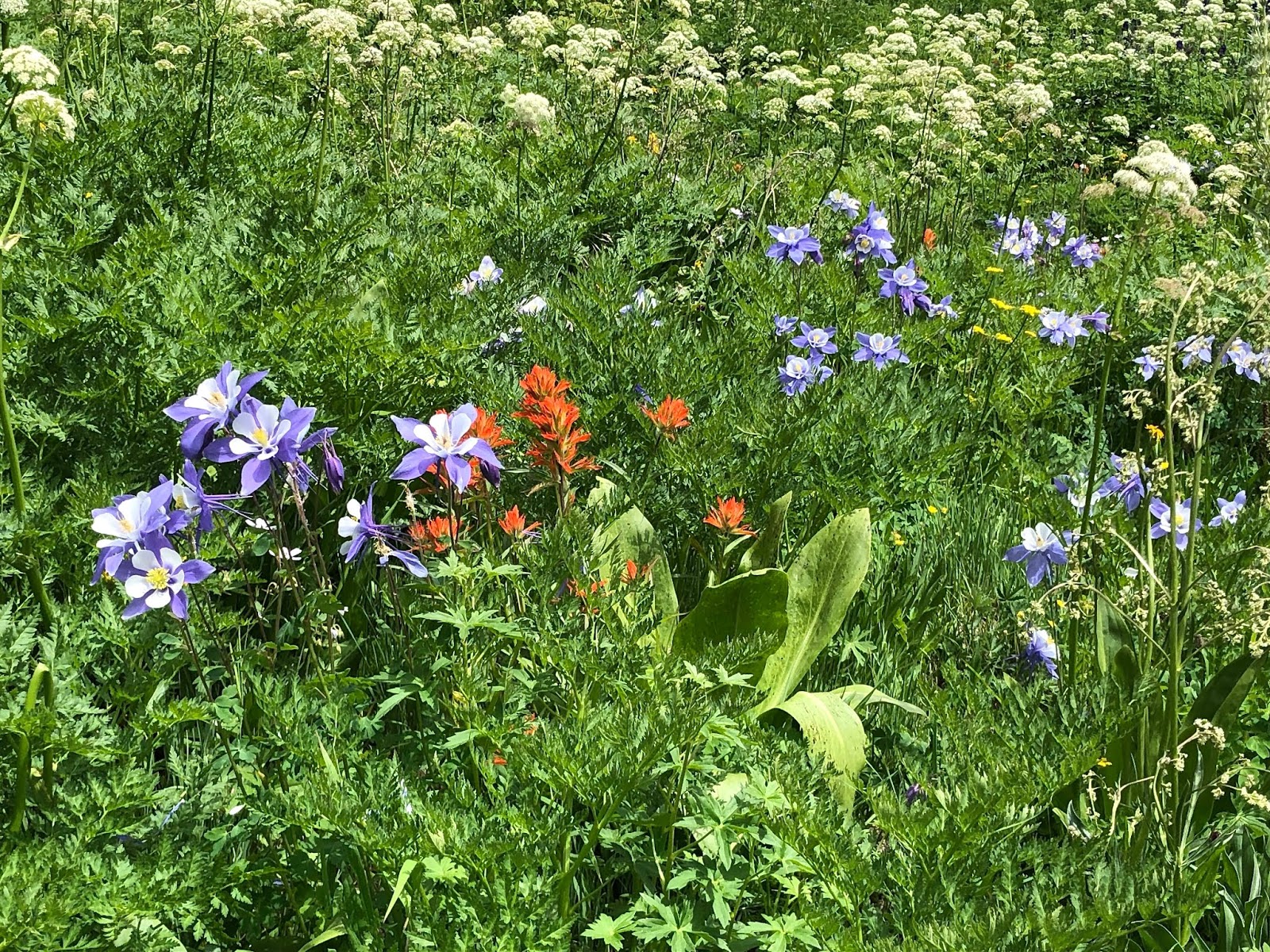 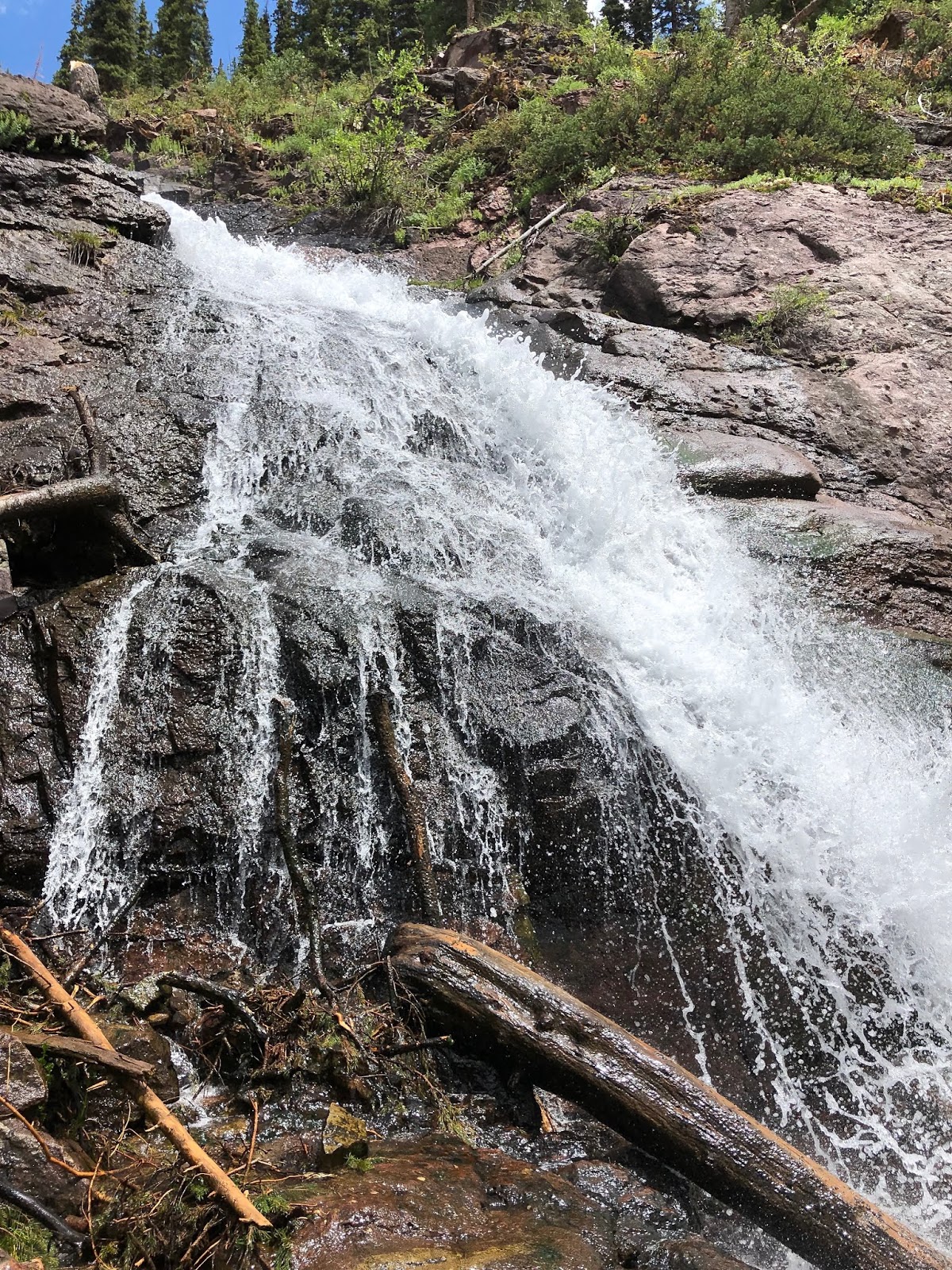 Time to go home...maybe have a celebratory pizza and IPA at Colorado Boy Brewery...
Till next time,
Peace Out,
Mark and Bobbie