The Gift Of Luck 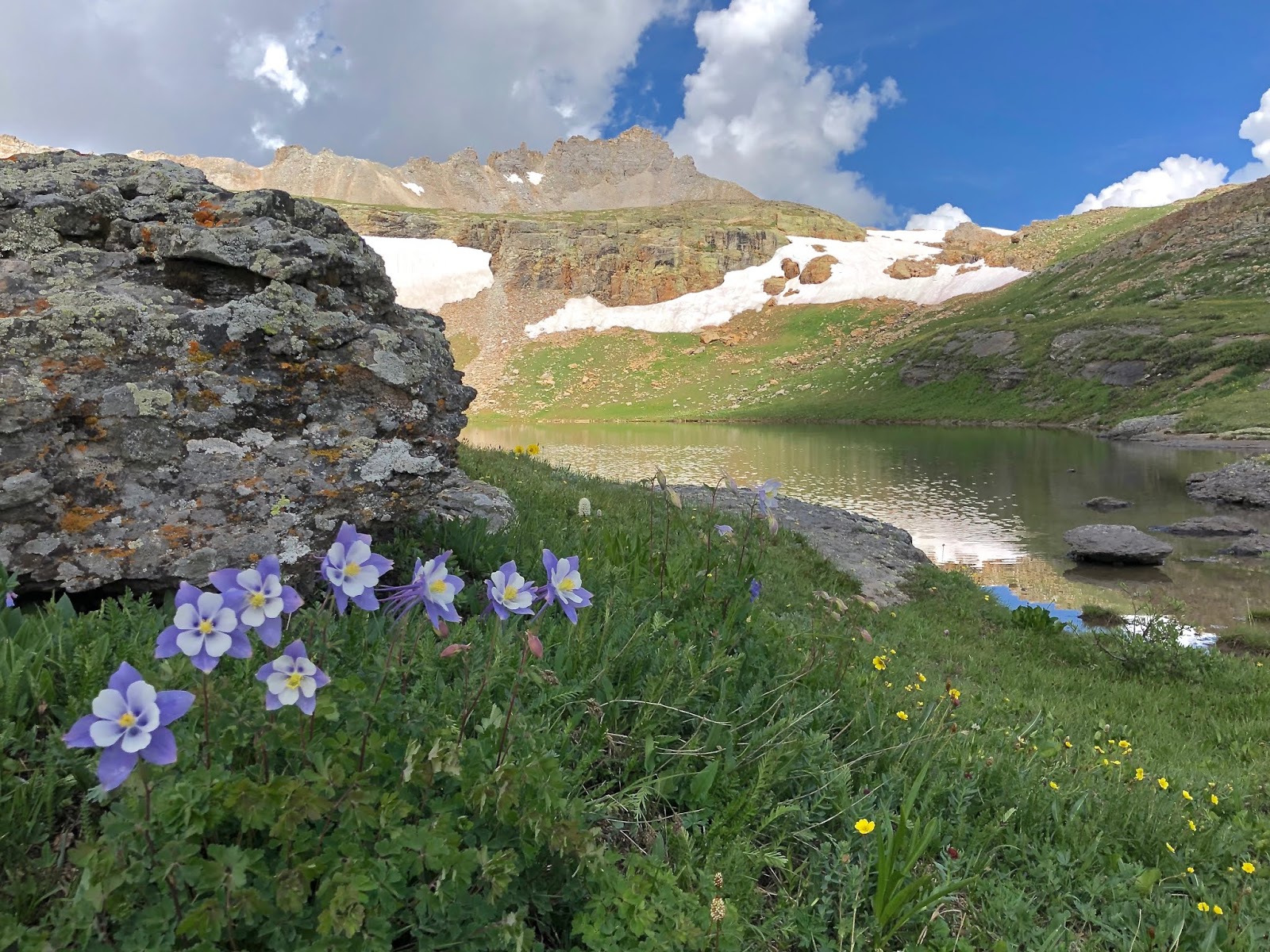 "In life, there is no gift (so) overlooked or inevitable as failure." Can't Hurt Me, by Navy Seal, David Goggins


We've been struggling to get above timberline this summer. It's our Happy Place. But, for one reason or another (abundant snow being one reason...monsoonal thunderstorms the other) it's not working out. That has to change. 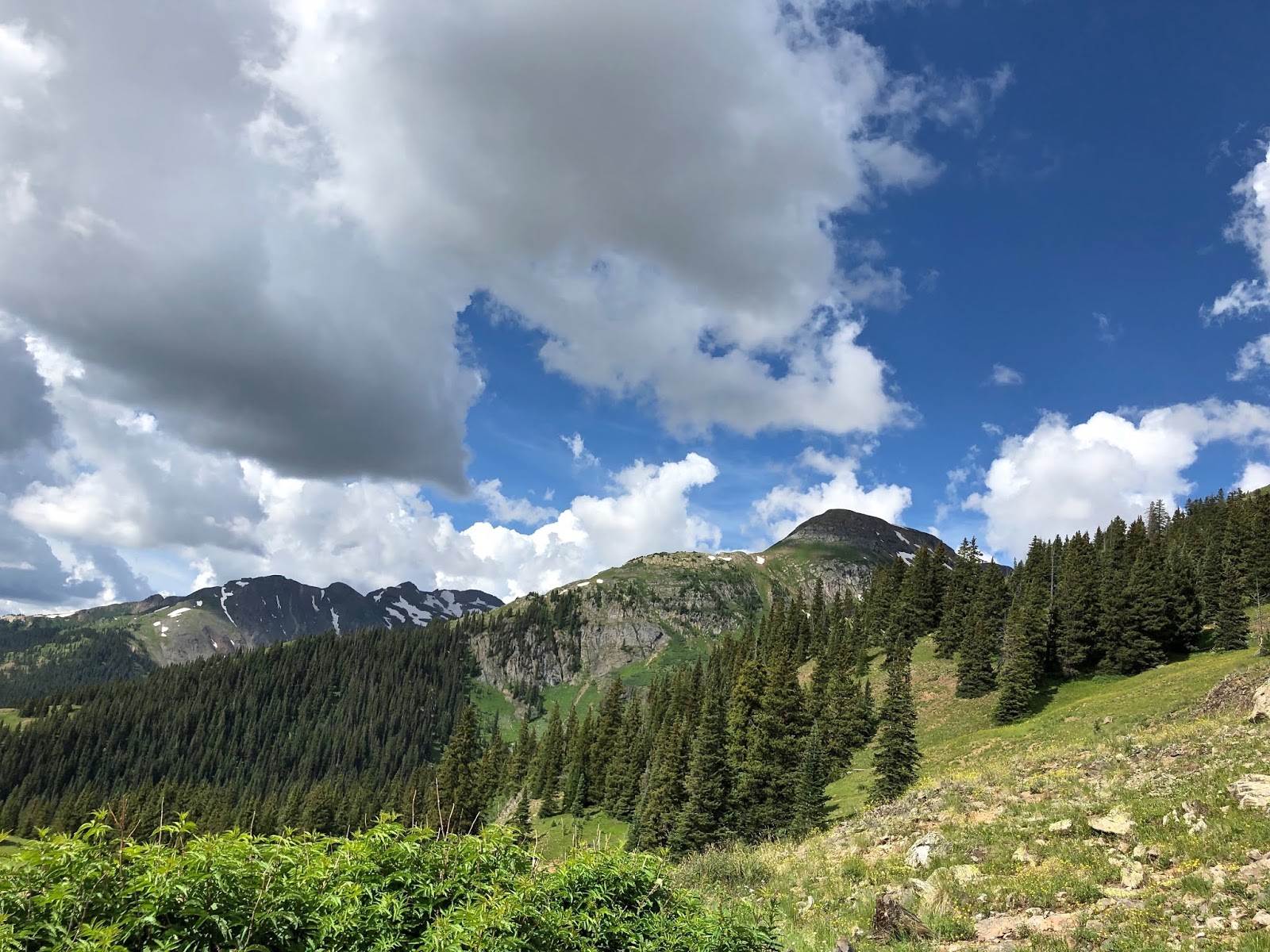 I worked on putting up the last blog post till 10 AM on Friday, which put me late getting "outside" where I belong. The Weather Guessers forecast (why do I even look) was for cloud cover to move in by afternoon, but, surprise, no thunderstorms. "Clouds" are generally not a photographer's best friend, at least when they are solid. I figured if I went somewhere close old Sol might take pity on me for I a few wildflower and landscape shots. I grabbed my pack, told Bobbie I was headed for Bullion King, and flew downstairs. Unfortunately it was a workday for her.

Recall our previous attempt on Bullion King three weeks ago was met with roadblocking snowdrifts. We opted to just hike. About a half mile from the lake, it started to rain and groppel and blow. Then Thor unleashed a few of his "bolts," which, along with being faced with a sketchy, near vertical ice/snow crossing, we turned around. 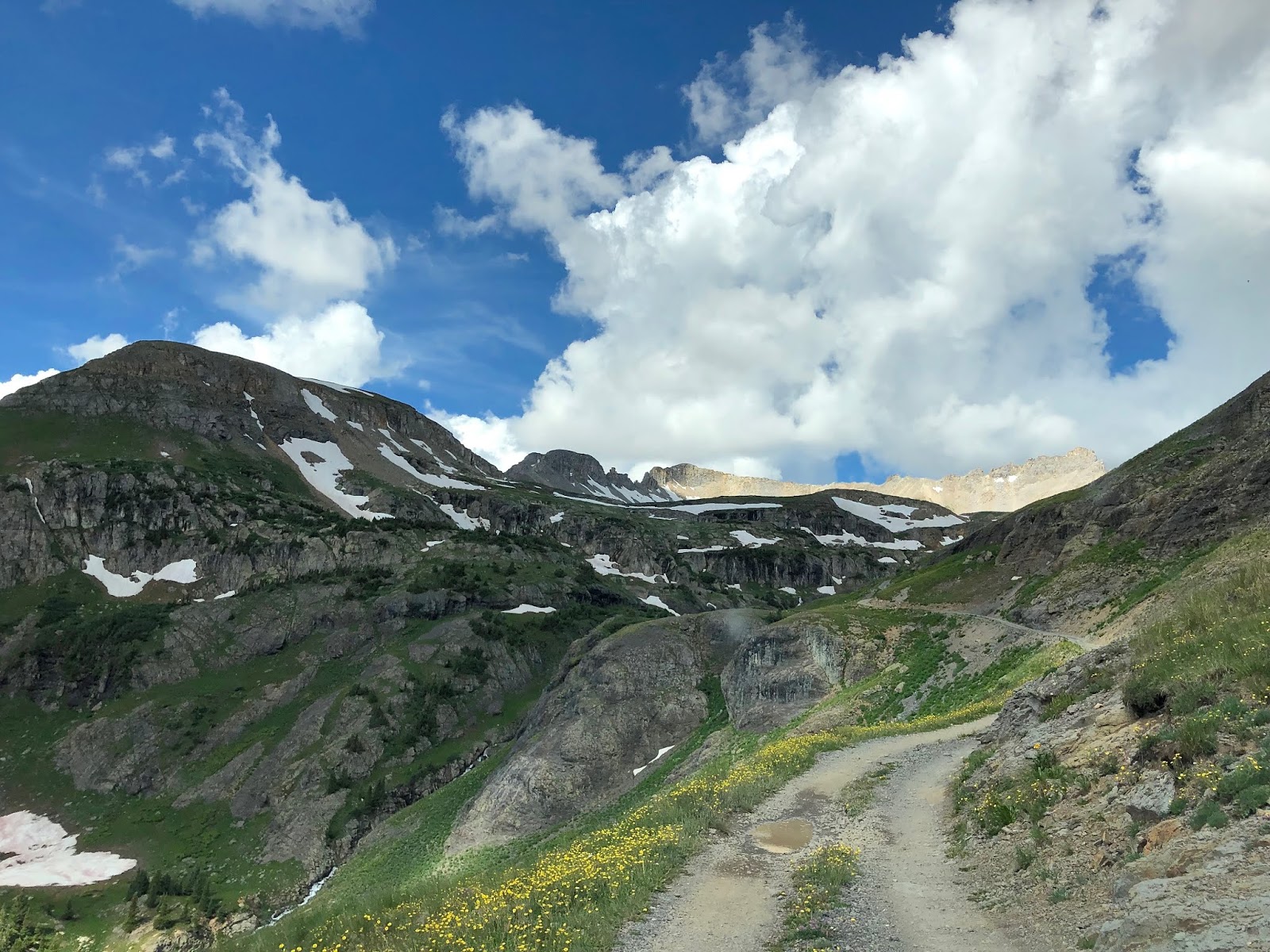 This time, however, Jeep road was clear of snow and I was able to motor all the way up to the parking area. The sun was in and out, but they were the cool kind of clouds...tall and cumulous, and far enough apart allow considerable blue sky. 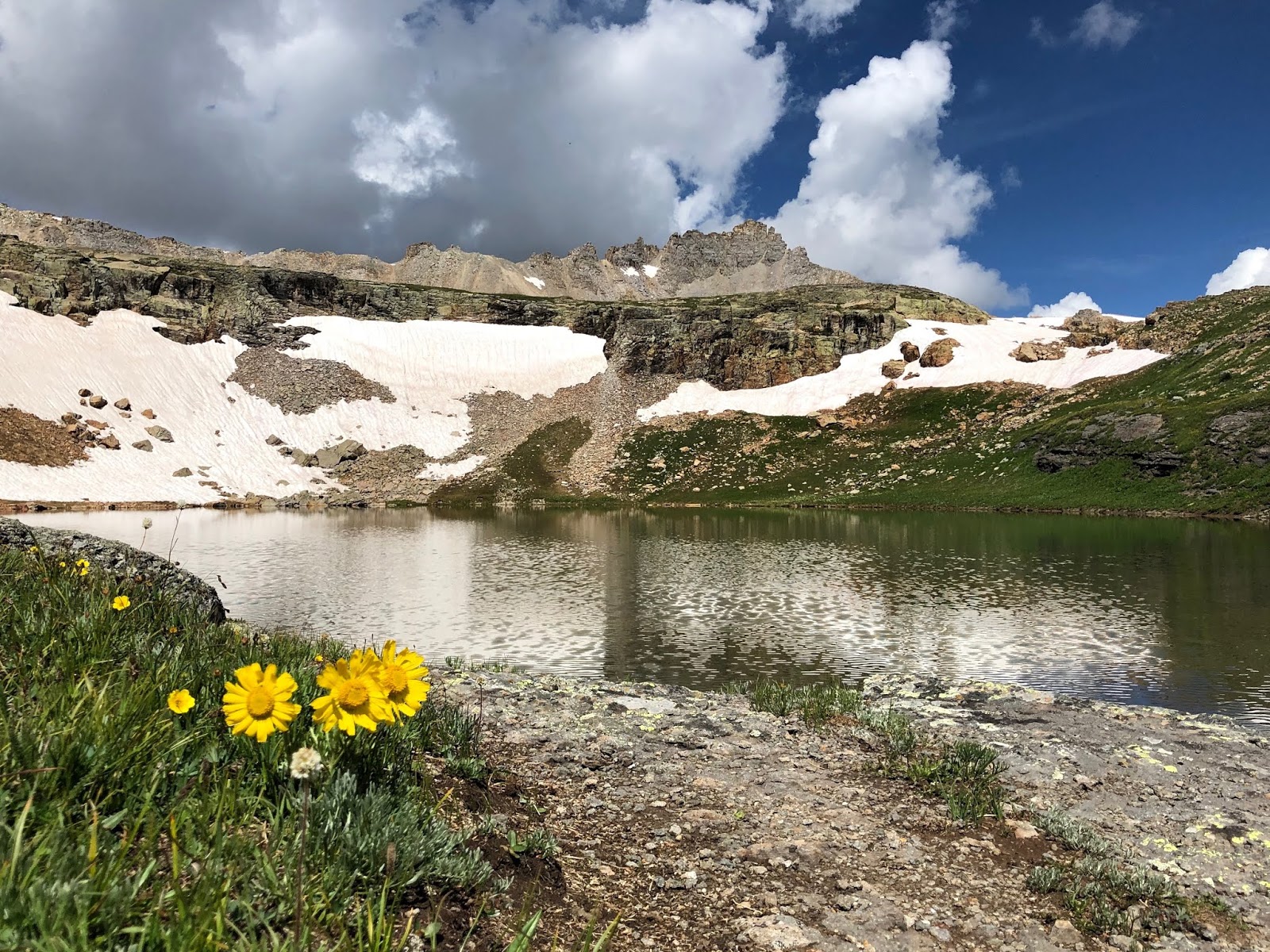 I felt strong so it ended up being a quick power-hike to Bullion King Lake. Usually the basin is covered with wildflowers by this time...maybe even fading a little. But there was nothing "usual" about this past winter's record snowfall. I'm hoping wildflowers are going to show, just a few weeks late. Time will tell...

I shot what few flowers I could find, then decided, in the absence of color, to head up to a rocky saddle instead. 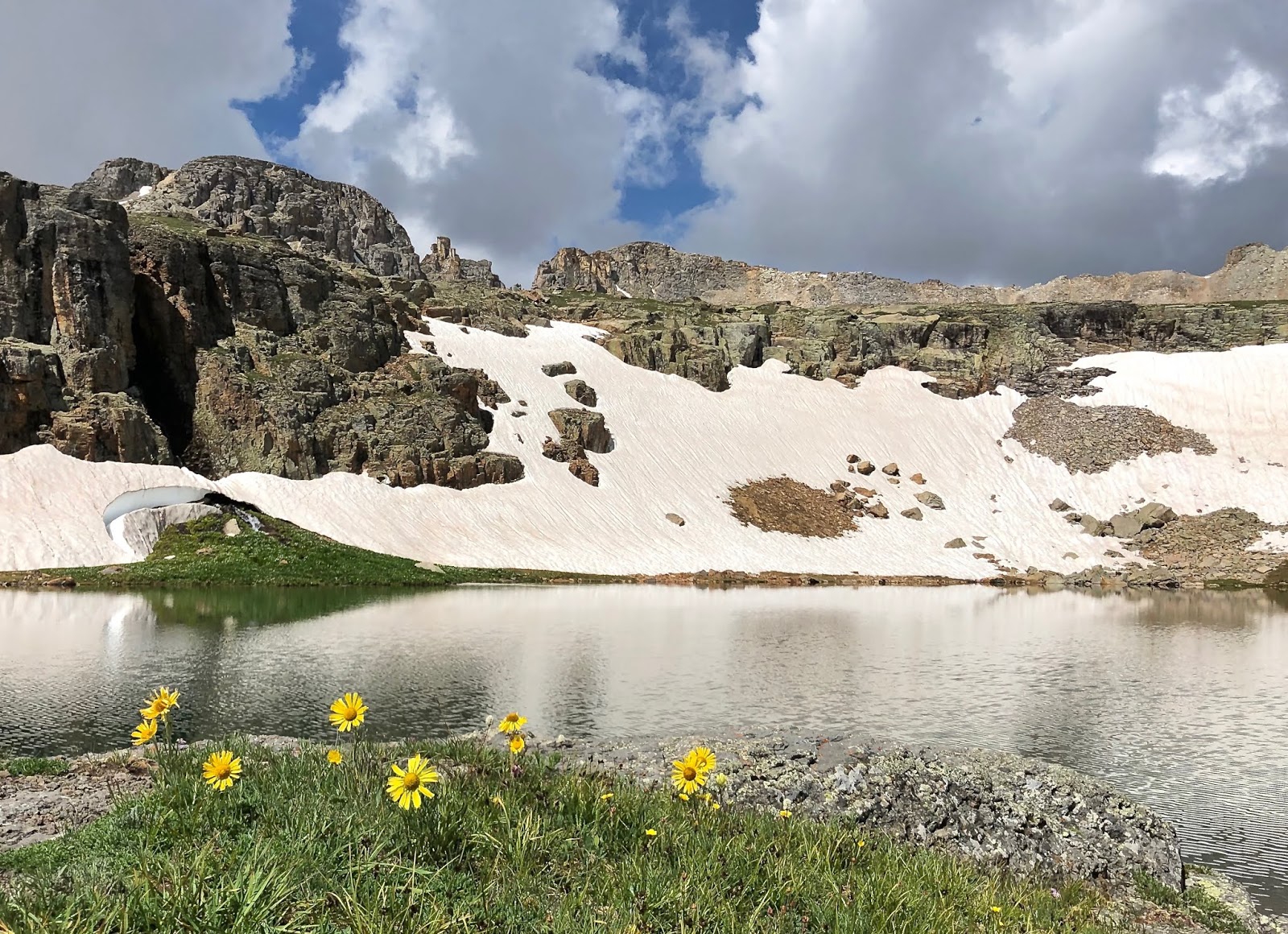 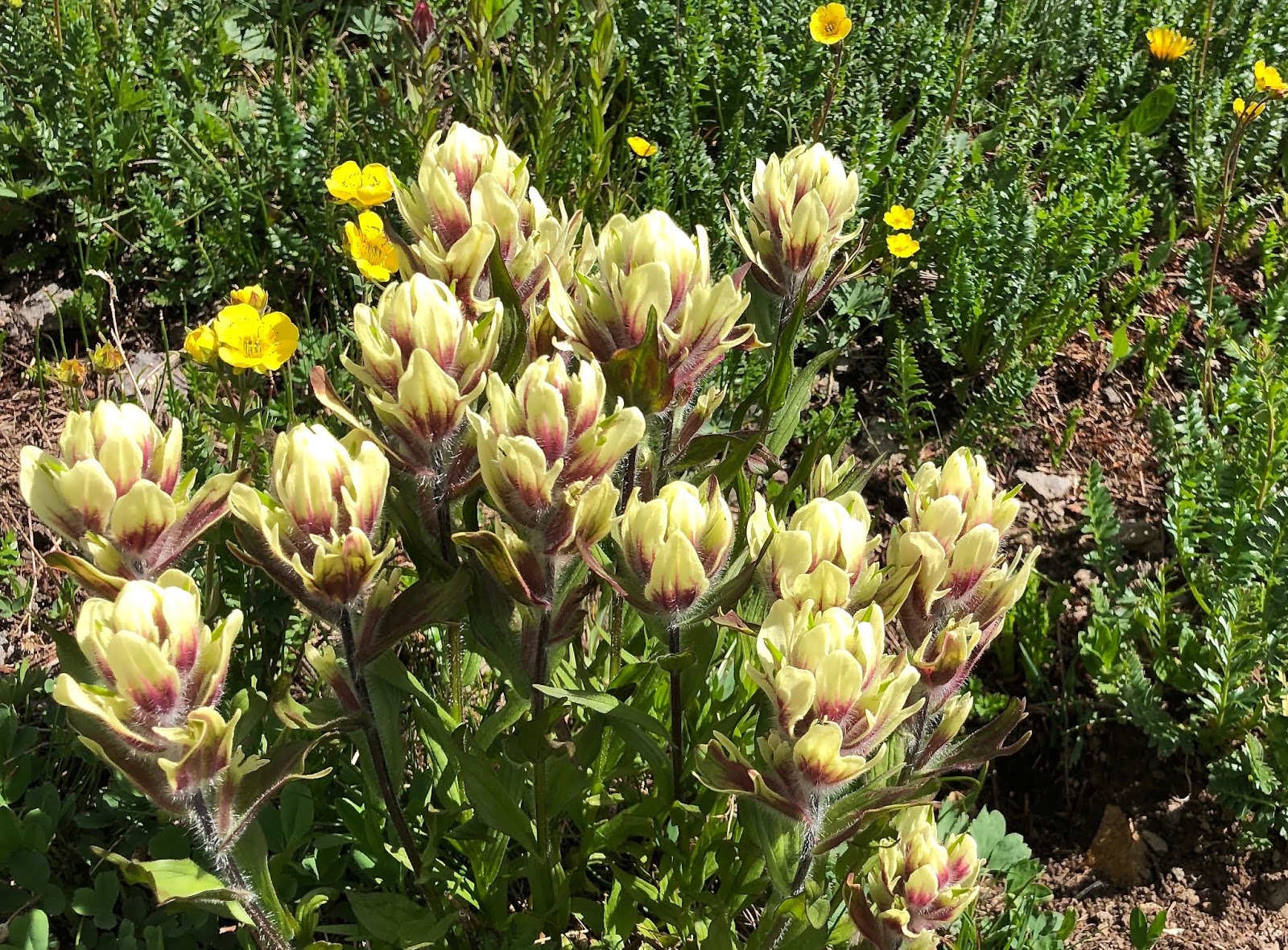 In heading for the saddle, I crossed a couple large, inclined snowfields. They seemed solid enough to support my weight so I eased across, using my hiking pole for balance.

All of a sudden the snow gave way and I broke through up to my knees. I landed hard, with my left shin shoved against a jagged rock. My forward momentum caused left me thinking I was going to face plant...which allowed the jagged rock to puncture through skin to my shin bone. My hiking pole broke through the snow, too, wedging between a couple rocks and bending it to a perfect "L."

I dug my way out...tried to straighten the pole. I've never had much luck straightening a bent pole, and this one was an aluminum one we bought at Walmart. What can I say, we're cheap. Actually they're pretty good hiking poles—half the price of most others—until you kink one.

I was left with two short poles instead of one long one, neither one long enough to reach the ground. I hung on to the half with a handle and strap, in case I needed something to use as a brake in case a glacade gone wrong. 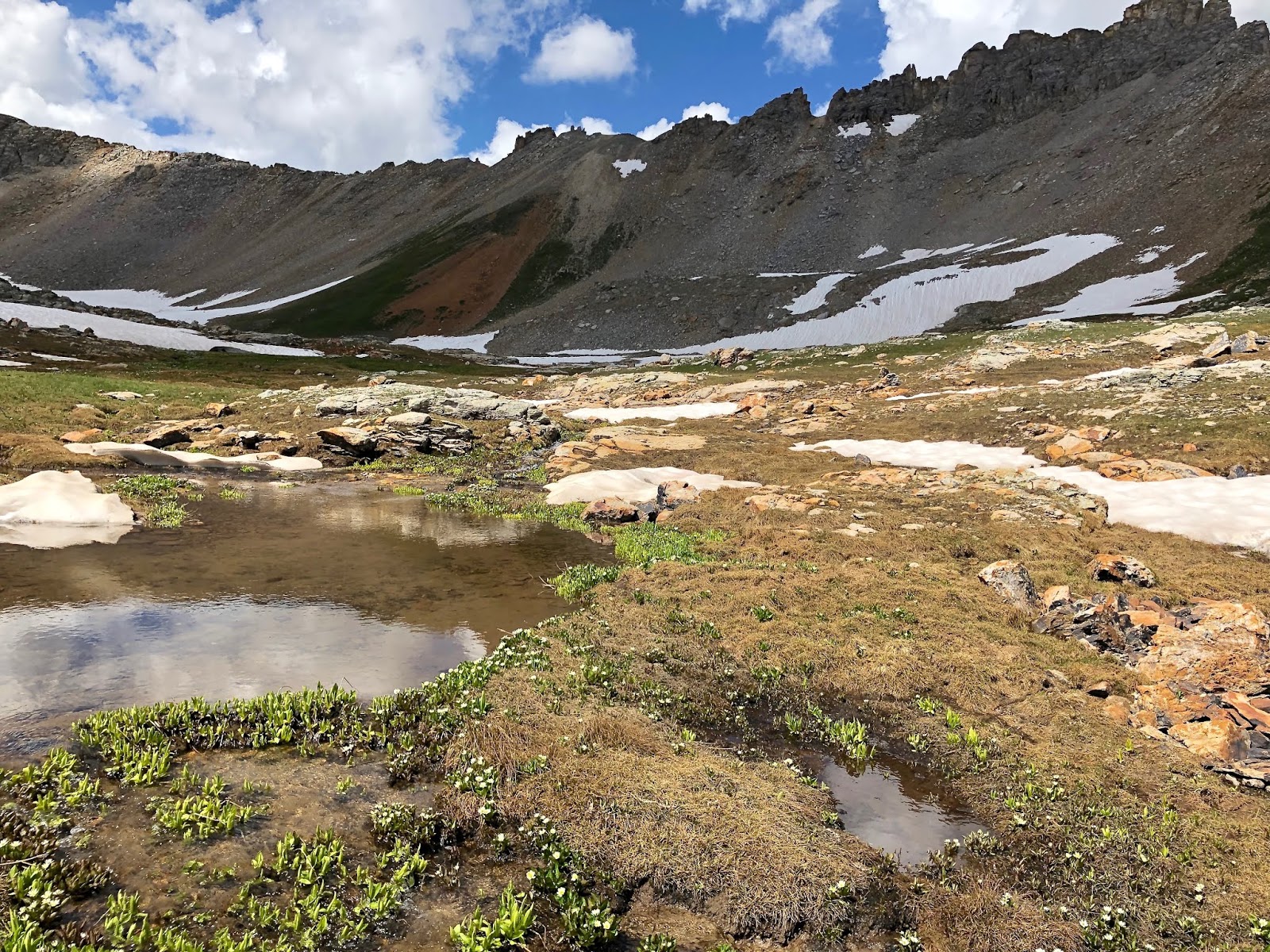 I made my way across the basin, dodging snow and water as best I could till I reached a slope of talus that was to be my "Stairway To Heaven." And by "Heaven," I mean the saddle with a view.

The talus was so steep that the rocks were heavily under the influence of Newton's Laws of Gravity and Motion. It be my luck to find the "keystone" and set the rocks flowing like a water fall.


I took a seat a couple hundred yards above the saddle, gazing at the view toward Telluride. Huh, the skies were mostly clear. Looking back over my shoulder, however, it was turning black. "Trouble" would depend on which way the clouds were moving, so I kept an eye on them. 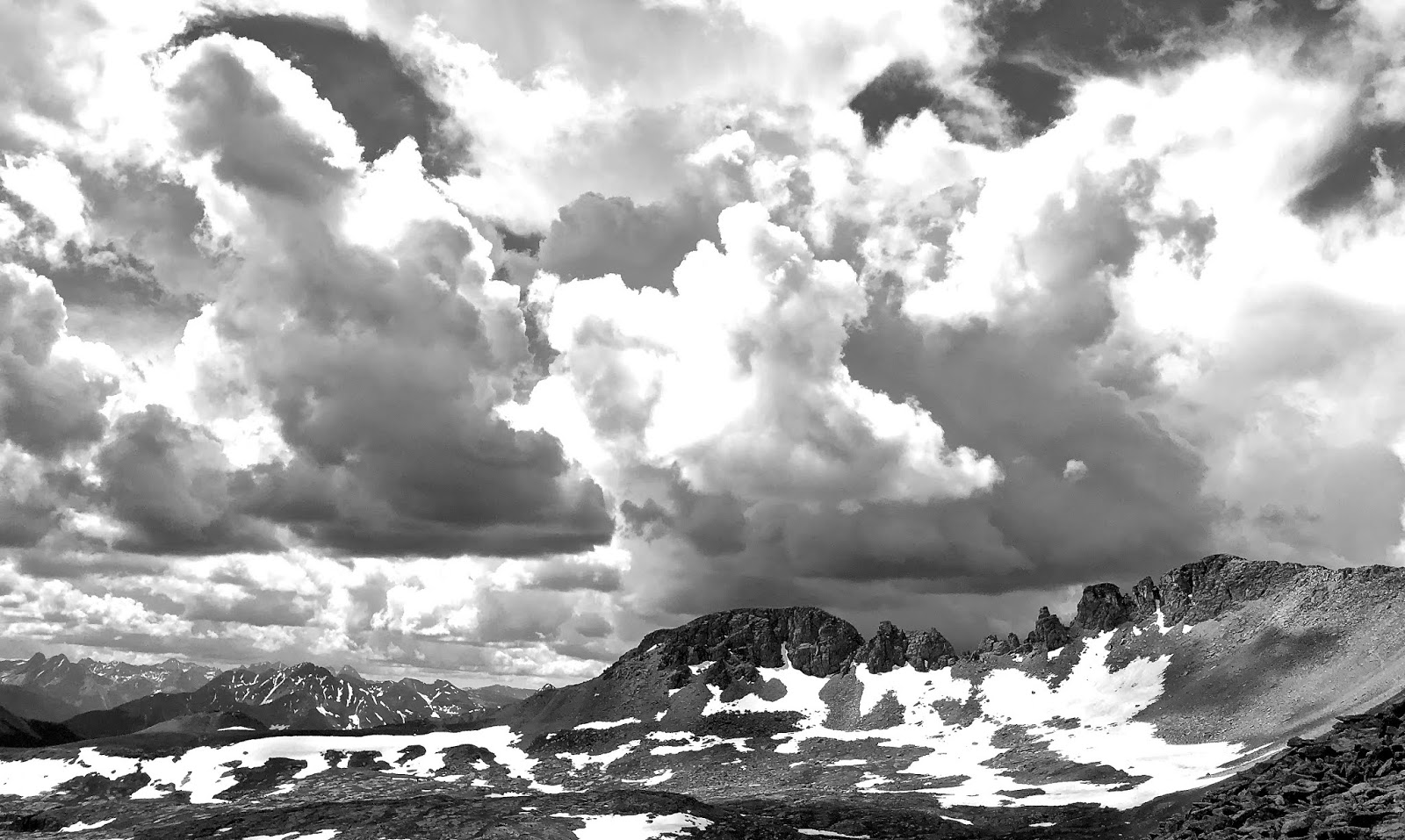 I was just about to lunch on a power bar when I heard a long roll of thunder from the "rumble wagon."  Hmmm...I guess the storm's moving north toward my saddle perch. 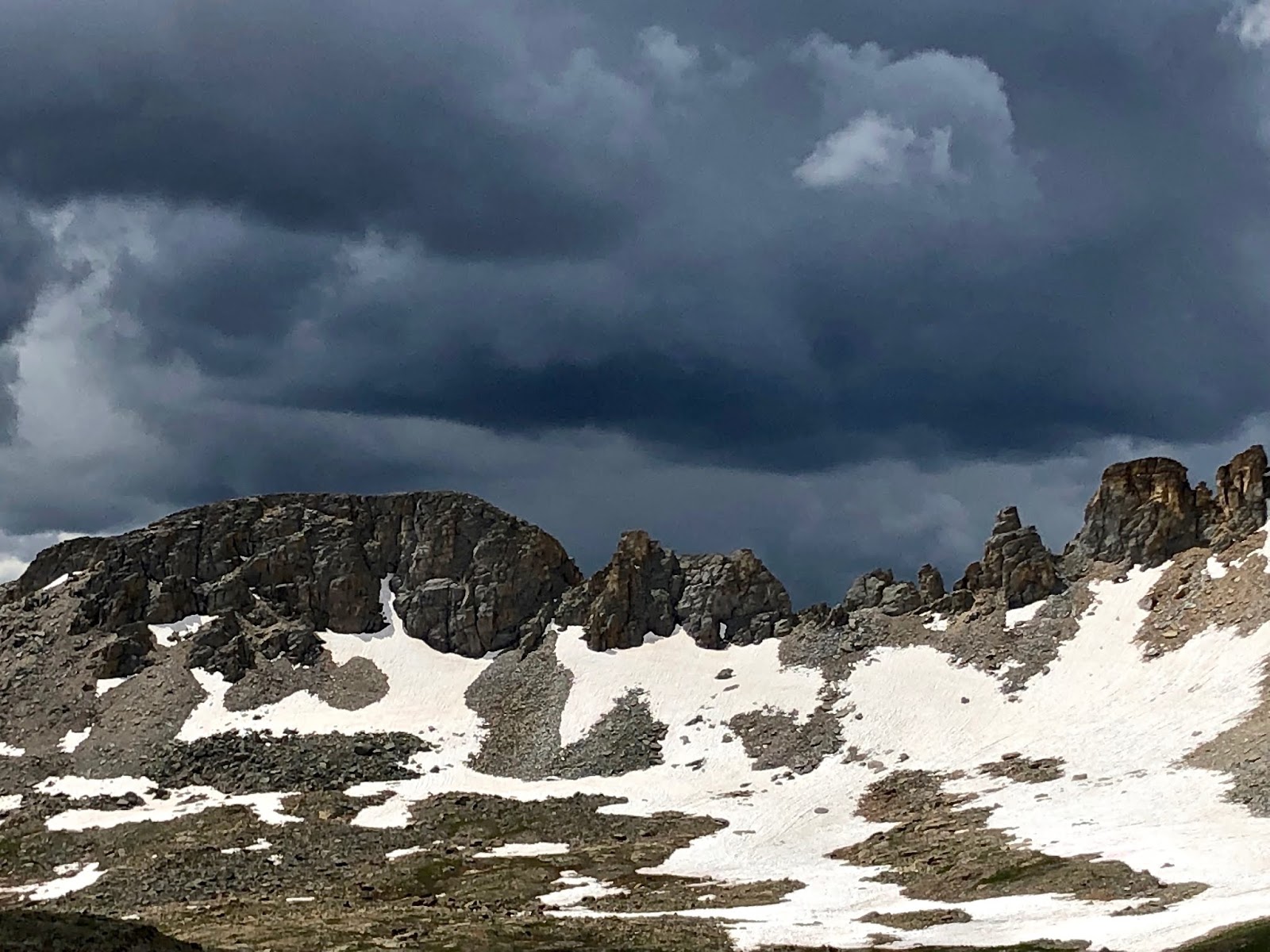 No time for food. I shot a few last photos before tiptoeing down through the killing field of tipsy, rock n' roll  talus. 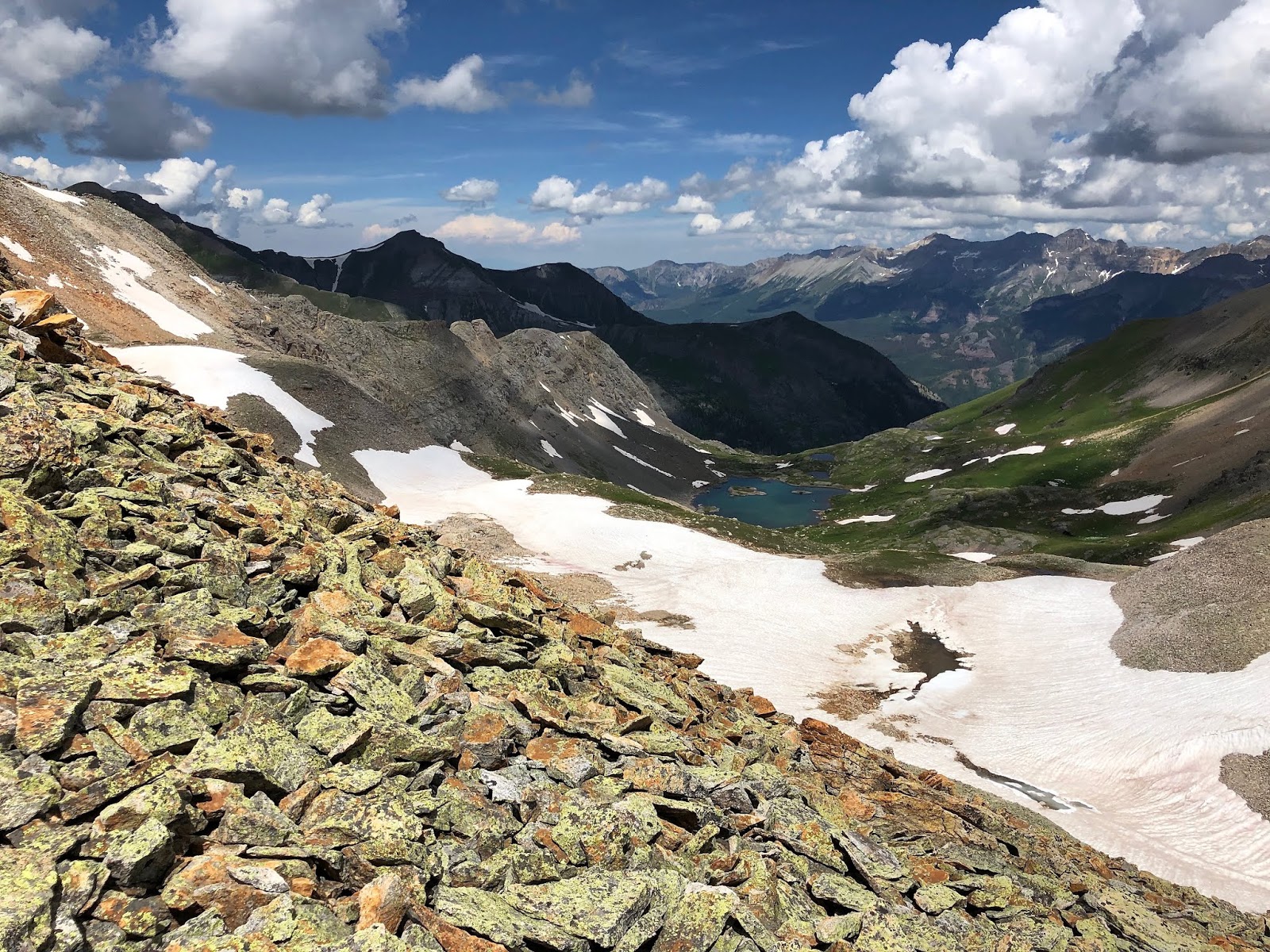 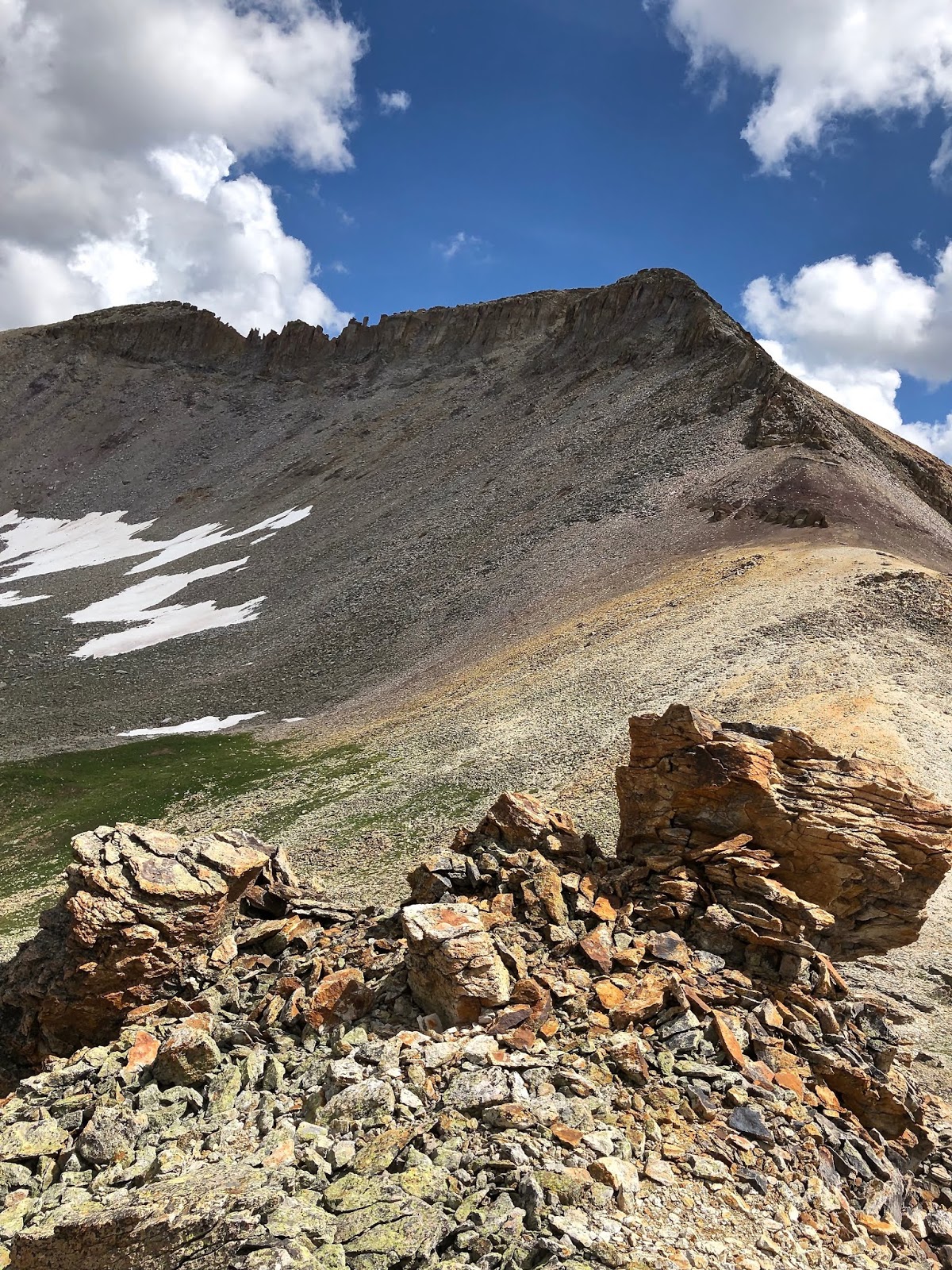 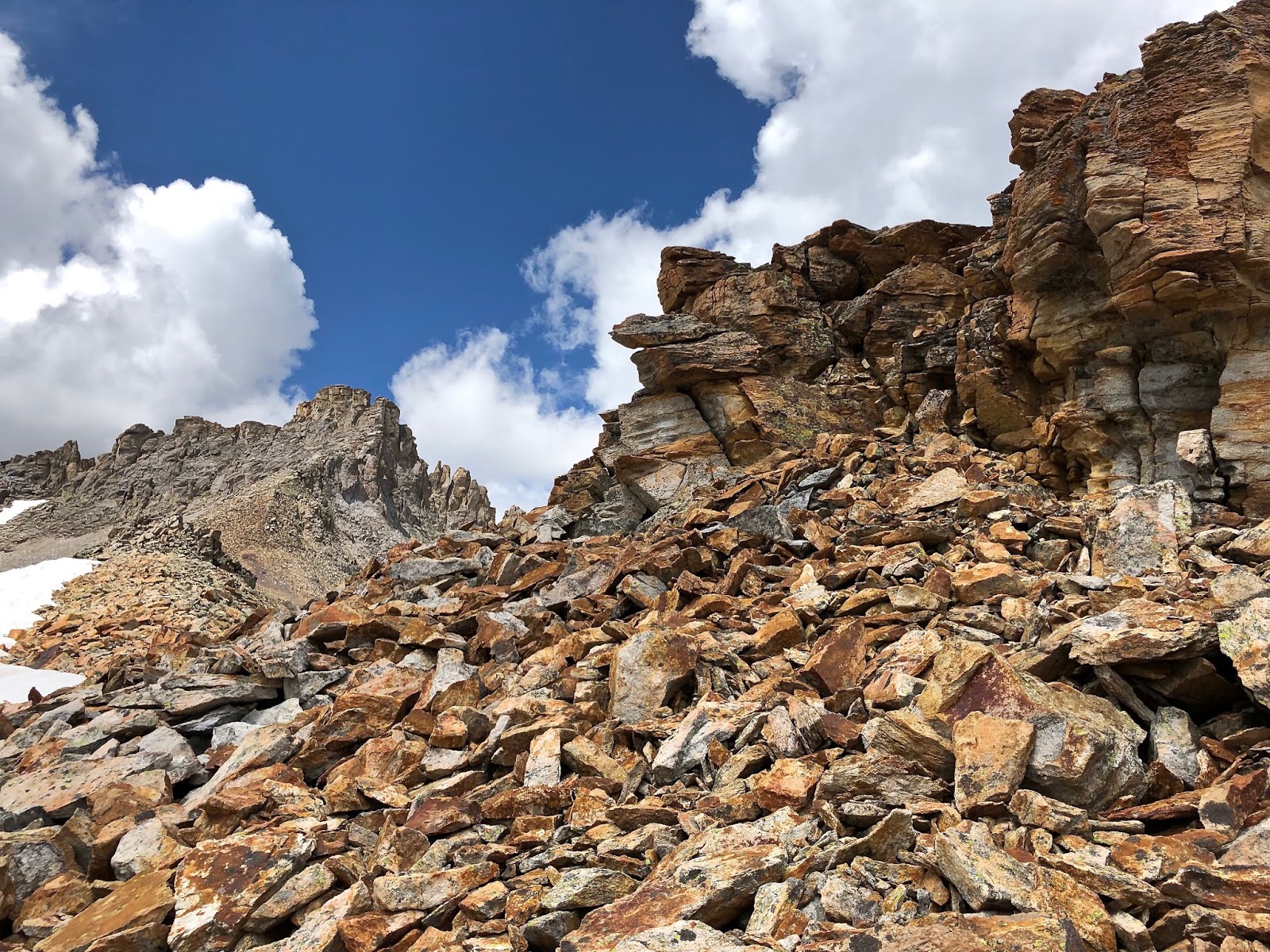 The storm caught me right whee talus meets tundra. At least I could move a little faster on tundra...not that there's any protection in moving fast but it does feel better. The reality is, Lightning doesn't give a shit what, where, when, or who. I attempted a shortcut back to the parking area. But in doing so I got hung up...as in cliffed out...on three different ledges. I ran each end to end, looking for a way down. Rain increased. Thunder rolled.

I pulled on a wool sweater and donned my rain jacket. Thunder was almost continuous. I'm pissed that one, I let it sneak up on me, and two, I'm wandering around on cliff faces looking for a way down. I should have went back the way I came. 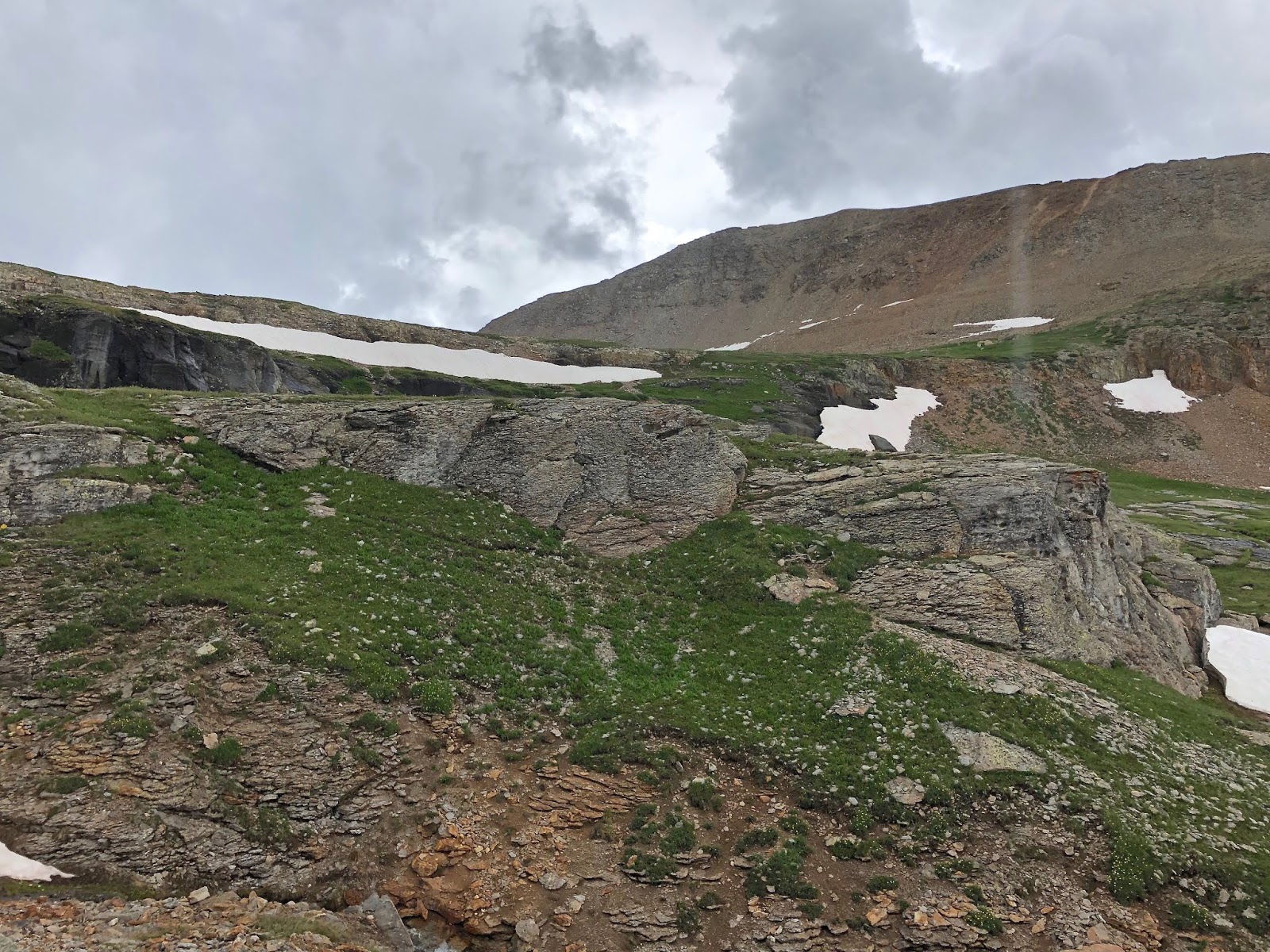 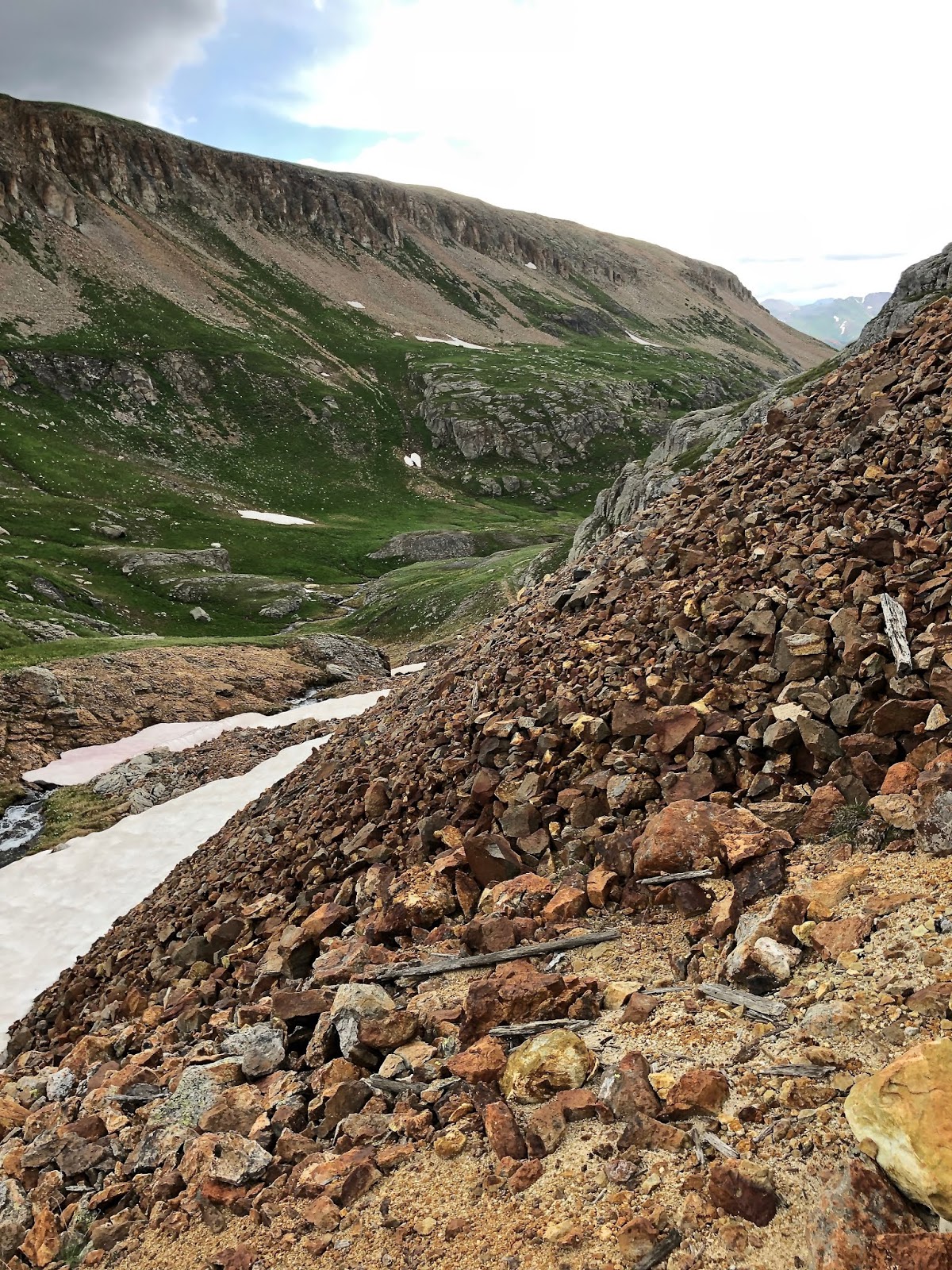 Just need to skirt some mine tailings...get down to that strip of snow that will lead me to the car...if it doesn't collapse into the stream flowing underneath it.

Panorama, before the storm:  Scroll →