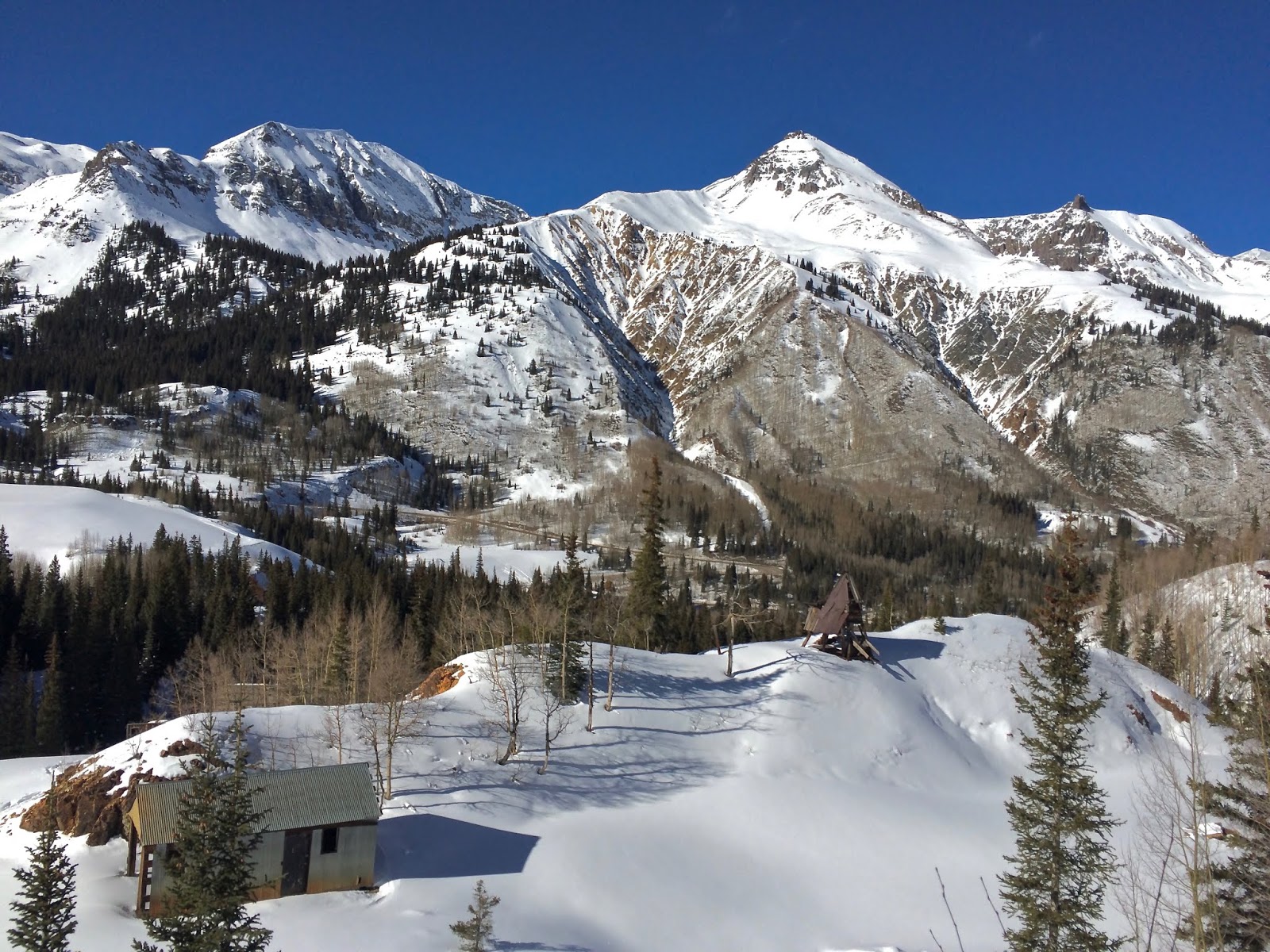 Bobbie and I paused to take in the above view after having conquered what we thought was all, or at least most, of the day's elevation gain. The mountain skyline was both stunning and familiar. On the far right a sliver of 13,208 foot Hayden Mountain; not enough fingers to count how many times we've summited that beast...from both the Yankee Boy and Clear Lake side.

Continuing left to right is the familiar dip of Richmond Pass, from which—just for a change-of-pace alternative to yet another Hayden summit—we once climbed up the opposite ridge and "ran" it south, past the little cone-of-a-peak, and beyond. We had hoped to summit Hayden's "sister" peak,  a 13er as well. Ah, what a great ridge-run...till it wasn't. Midway across, the ridge went knife-edge. Then suddenly, out of nowhere, lightning bolts began to randomly zap surrounding high-points. Thus, wanting to live to climb another day, we bailed. 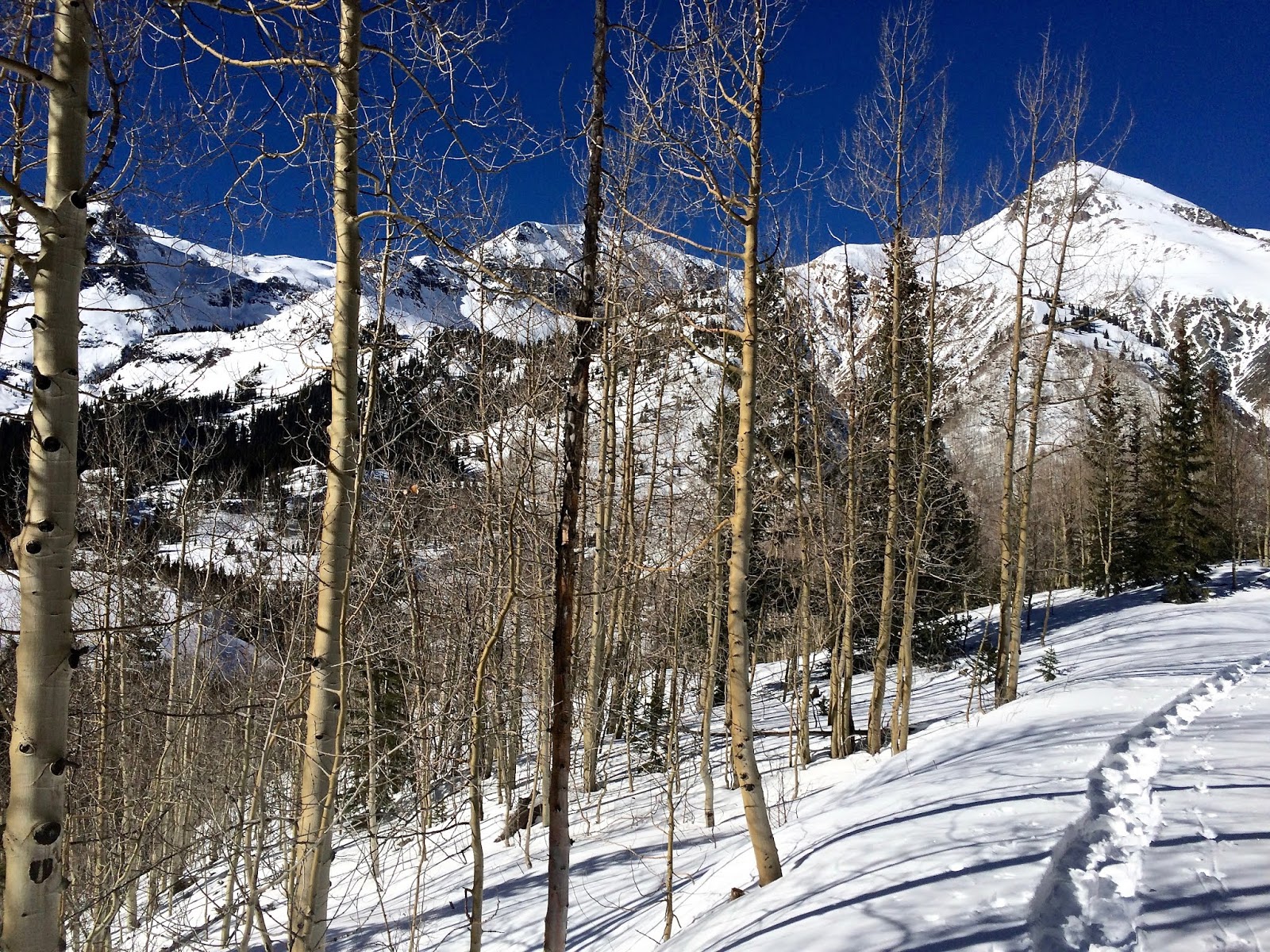 Snowshoeing on, through a forest of aspen and solitude, we stumbled onto an old mining road that, unlike most, appeared to be somewhat level.

It wasn't long till Bobbie noticed we were paralleling Lynx tracks (a wild cat with yellowish-brown fur...sometimes spotted...large snow-adapted feet, a short tail, and tufted ears...chiefly found in northern latitudes of North America). 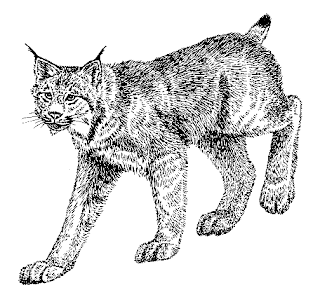 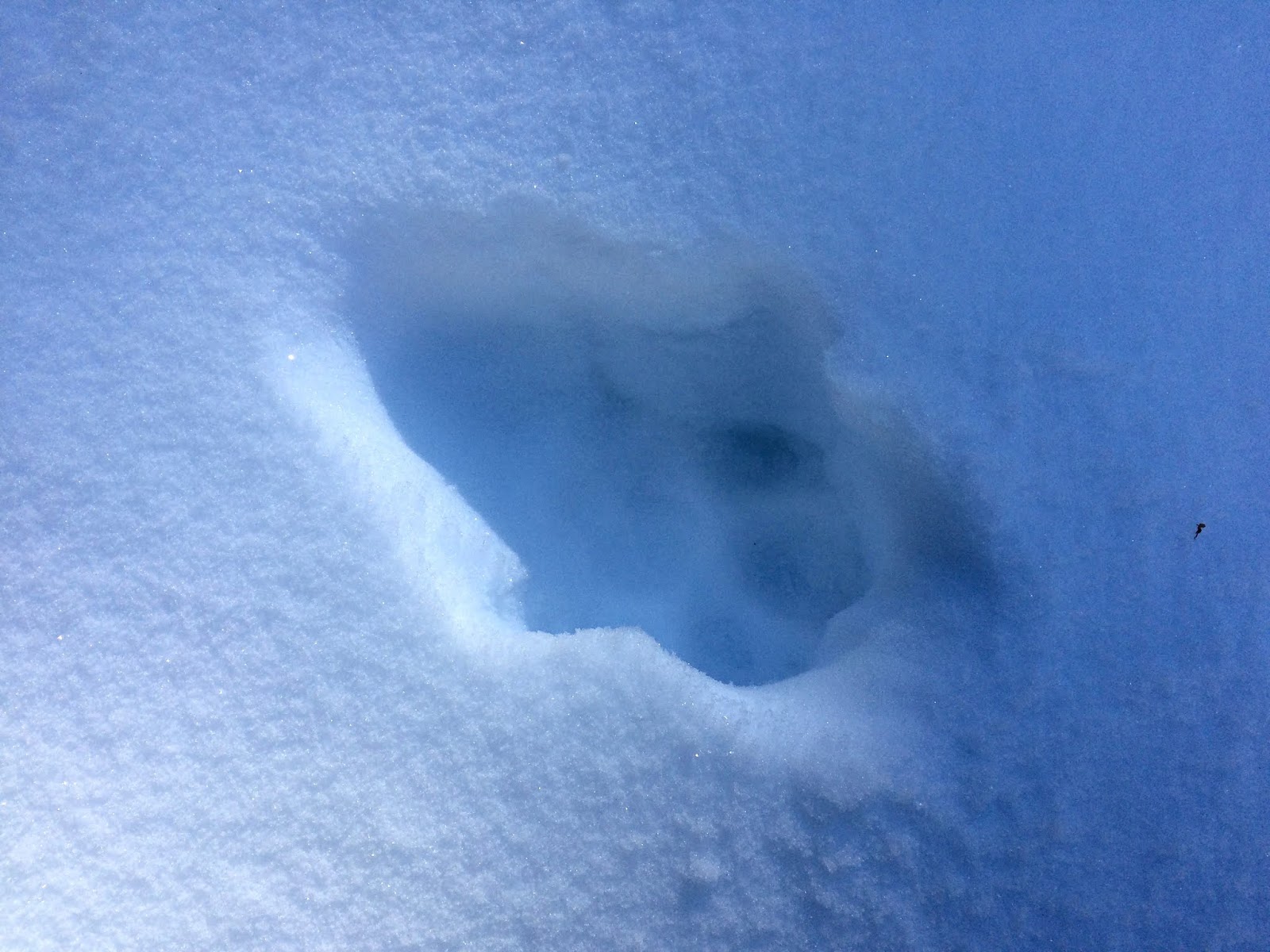 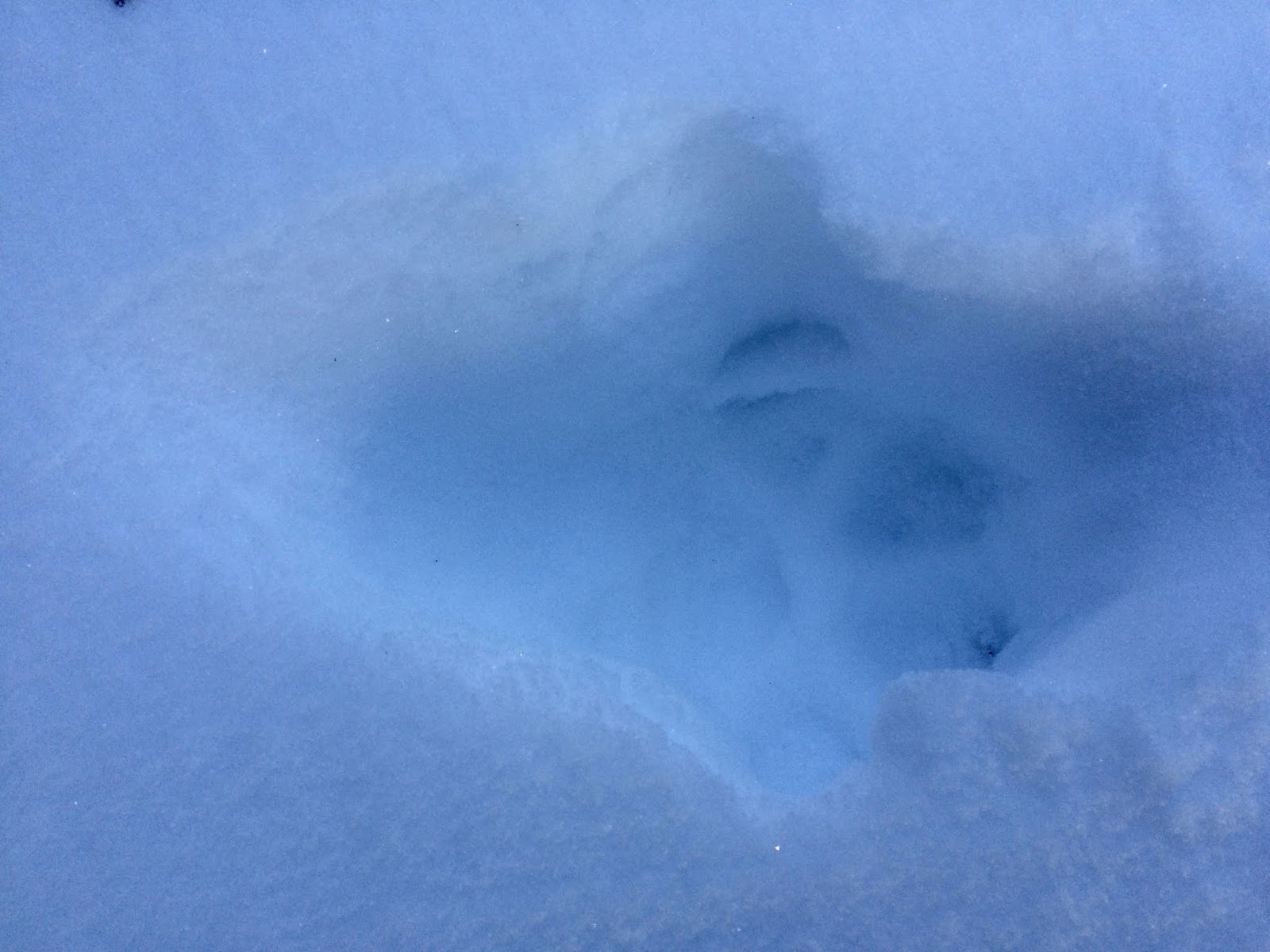 The Lynx winter diet largely consists of Snowshoe Hares...which are abundant in such places. Then we stumbled upon the remains of some unfortunate Snowshoe Hare...

Unchallenged and bored with level, we tried another road/trail that wound it's way up a series of steep switchbacks. After considerable investment, it petered out to a dead end and a wall of dense forest. Not wanting to backtrack (hate backtracking) we bailed down a narrow clearing in the forest, hoping to cut the original, more level road... 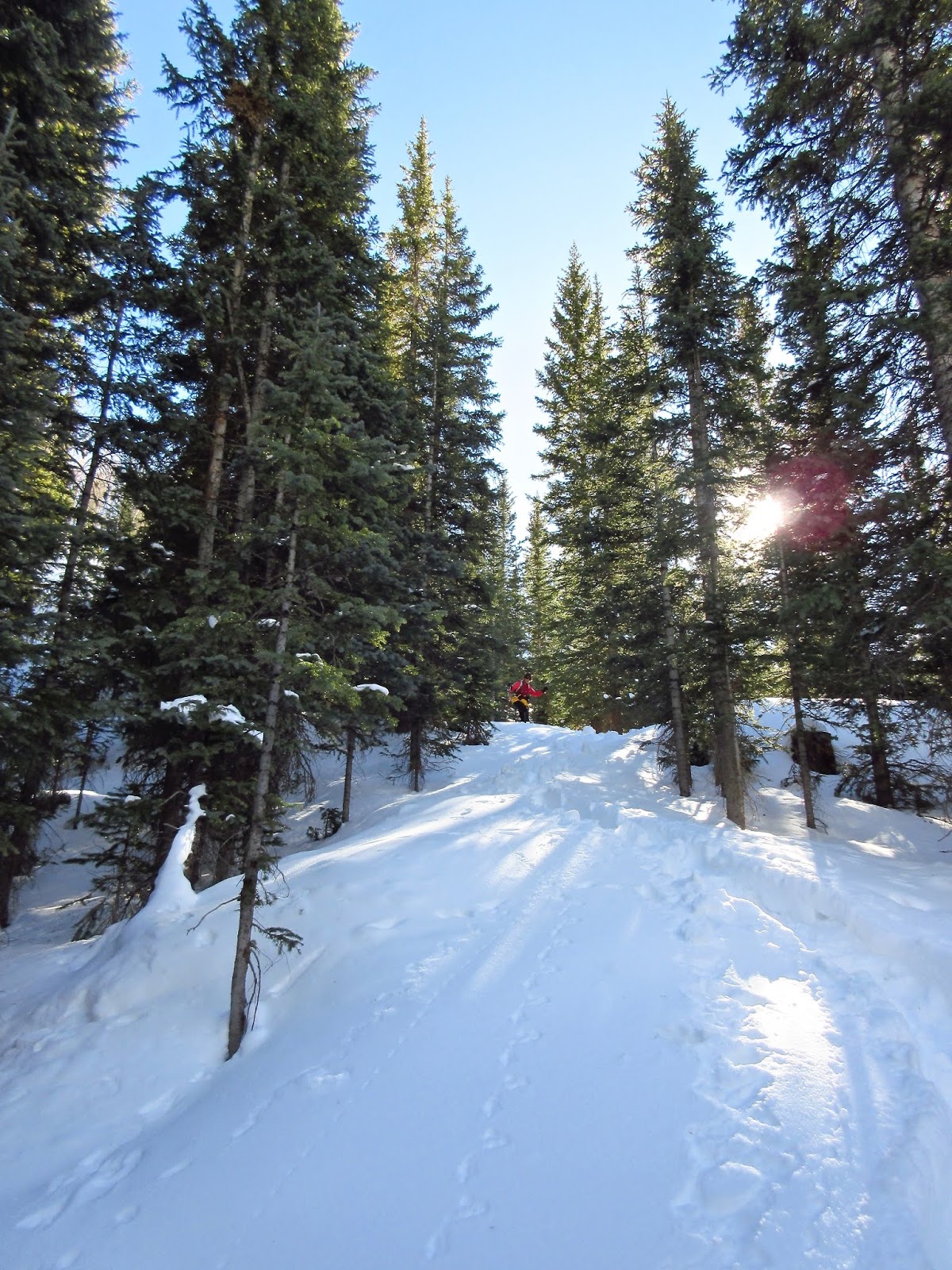 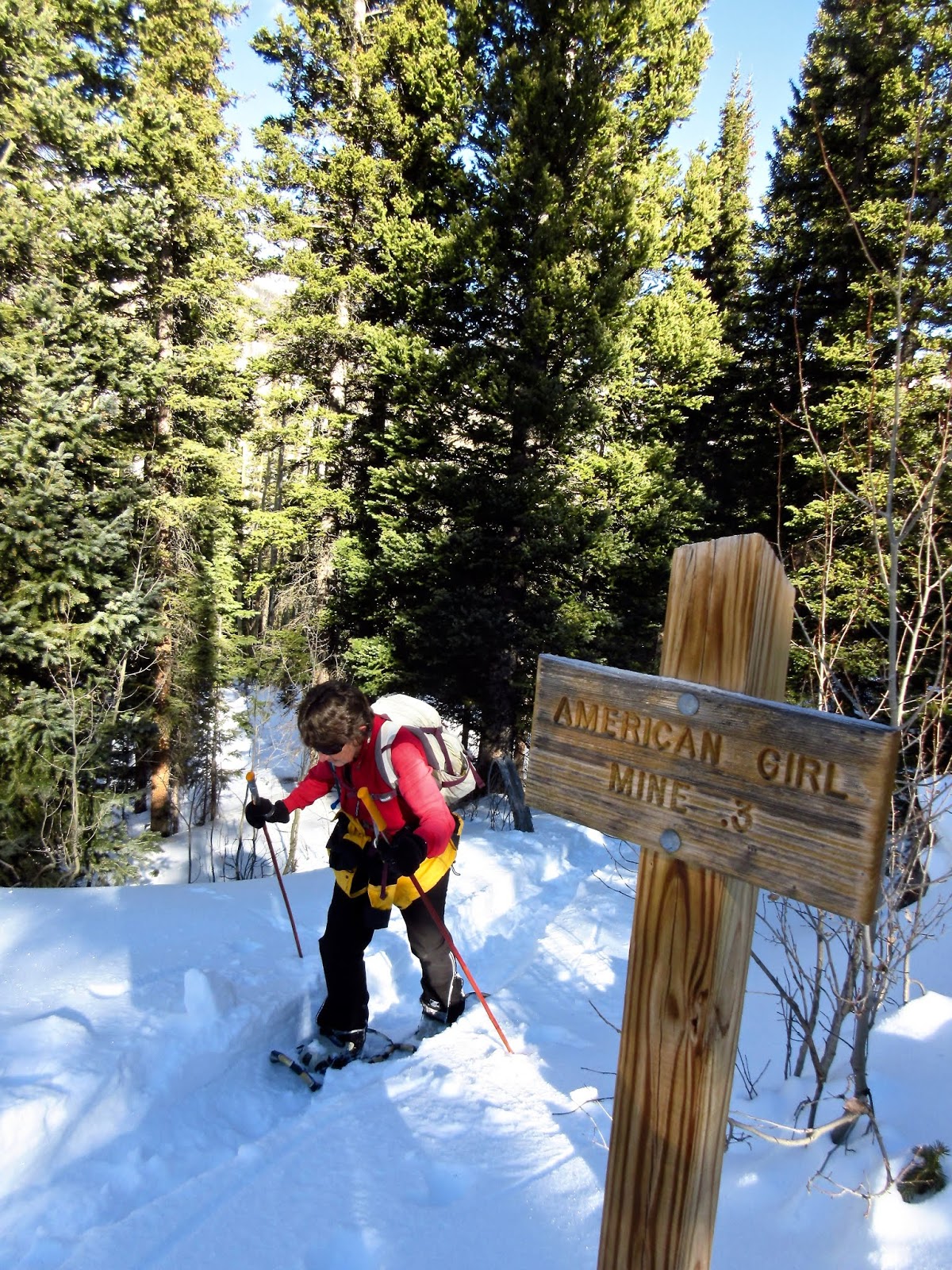 We eventually found the "level road," and followed it till it ended at a couple familiar trailheads. Yes, we had been here before with Leon and Debbie just this past summer, but from the opposite direction (Ironton).  I wanted to photograph the American Girl Mine-head again, this time all cloaked in winter snow. But the 3/10ths of a mile down to American Girl was steep, snow nye over my gator-tops. Concerned about energy reserves, we bailed about half way down (a common theme on our mostly destinationless adventures). Perhaps another day, now that we know the way. 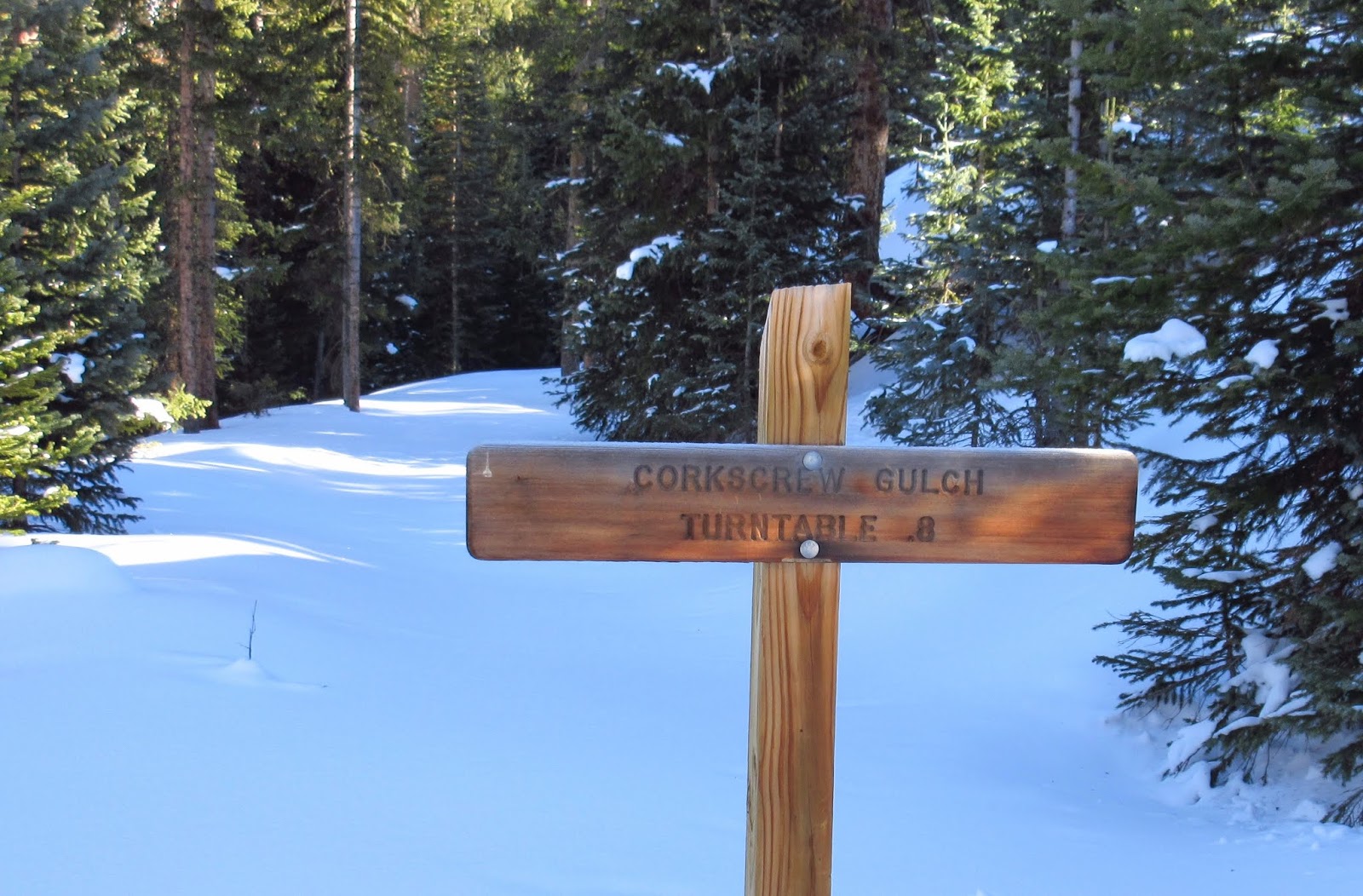 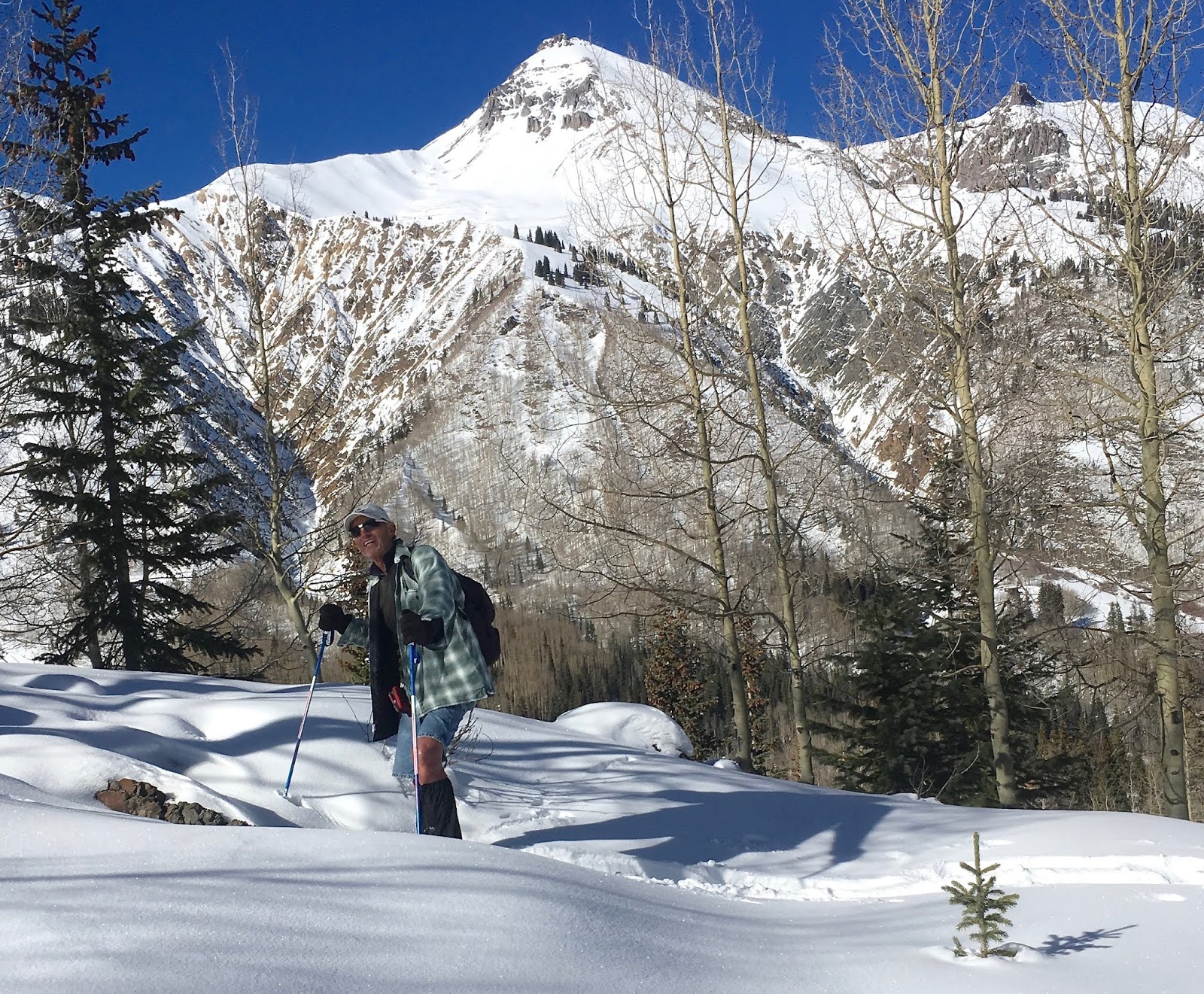 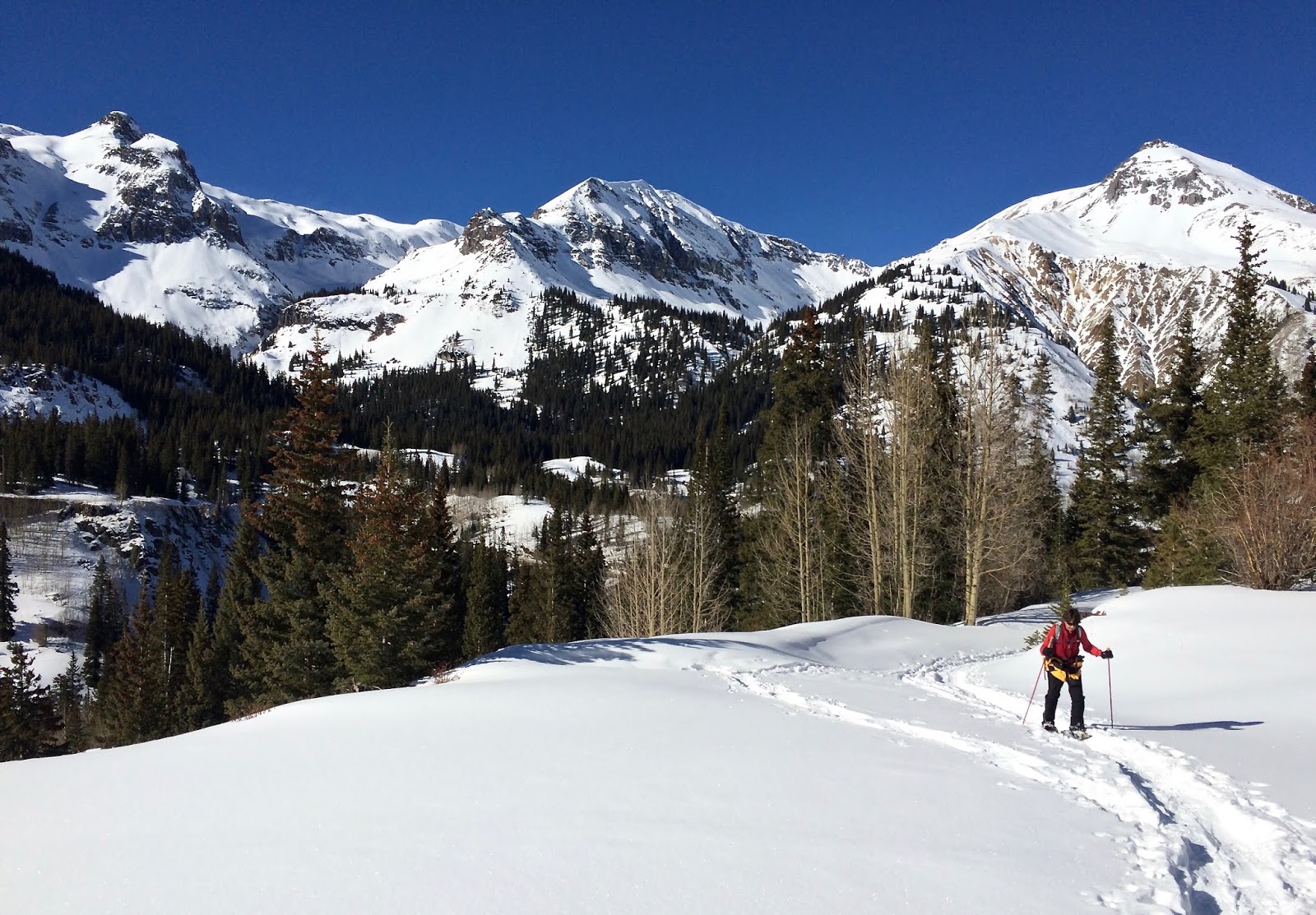 Back at the old homestead Bobbie and I decided that the day was just too beautiful to cut short.  We trekked the other direction cross country style, hoping to hook up with the road to Yankee Girl Mine-head. 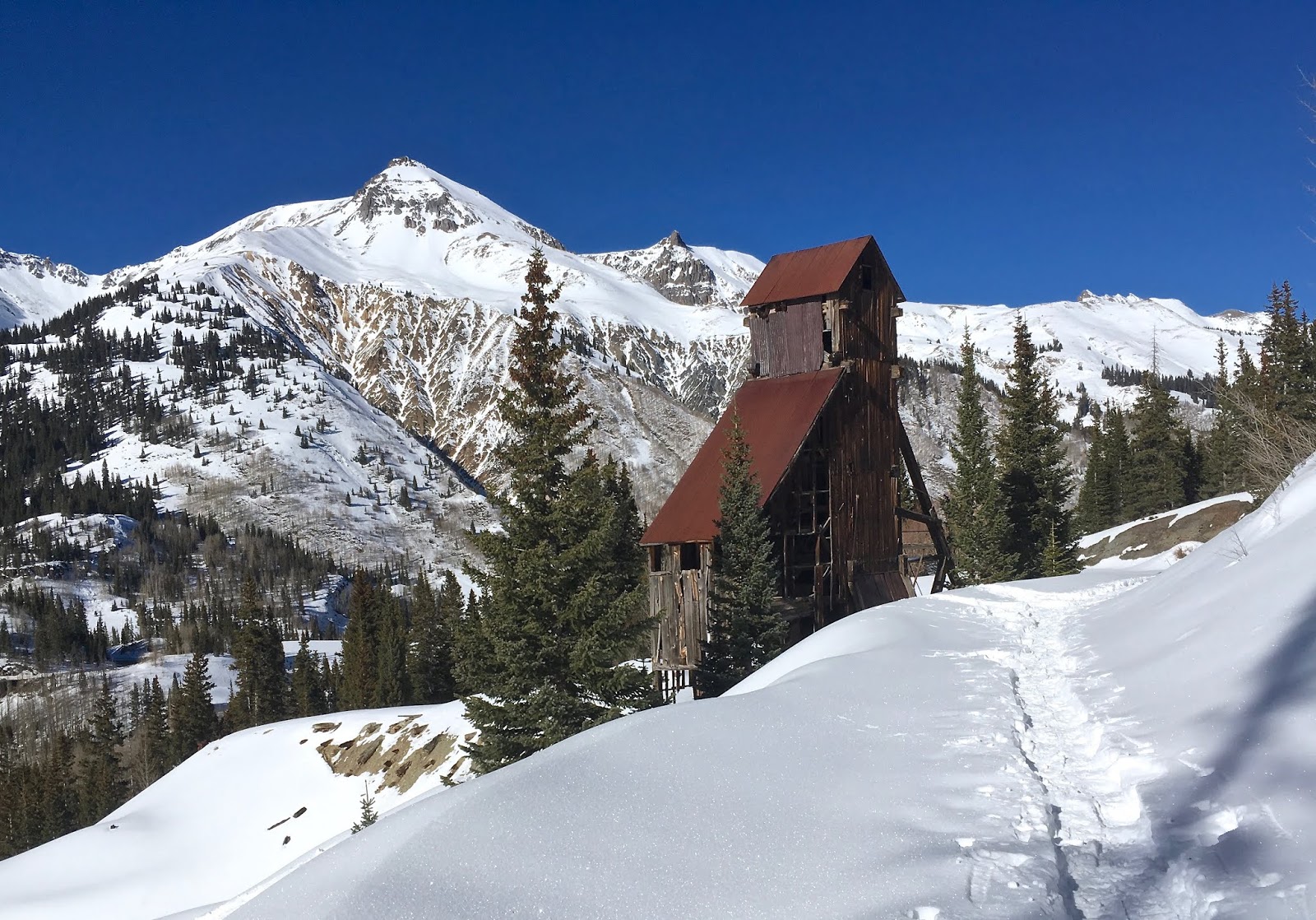 We paused for a picnic here. Light ricocheted in every direction. Though well below freezing, full sun and the feeling of warmth in late December and January is common...even at or above timberline. 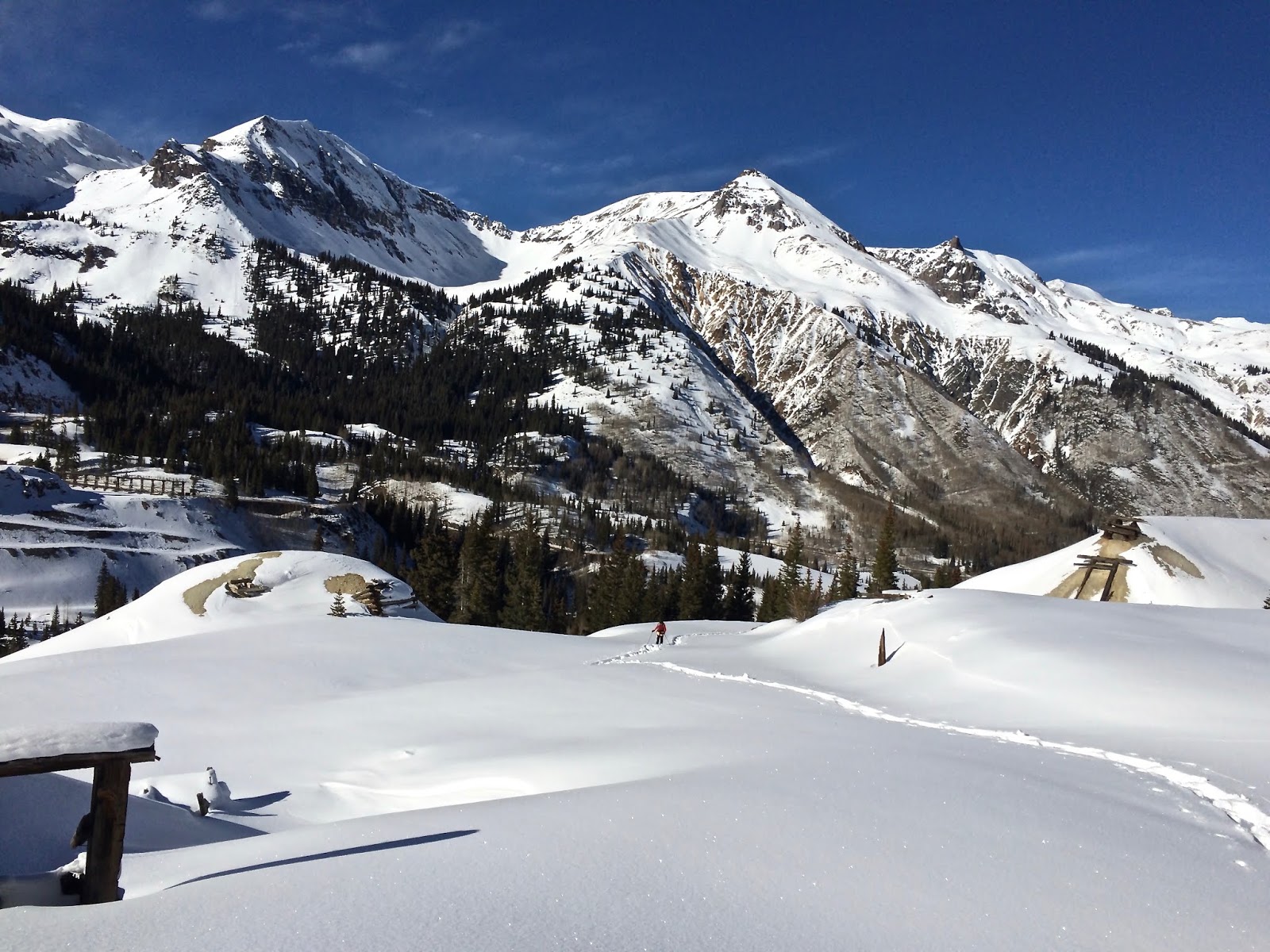 Nourished from our picnic, and so close to one of our favorite mining camps, I thought we should check one more box. It required breaking trail through shin deep snow, but, as always, worth the effort. 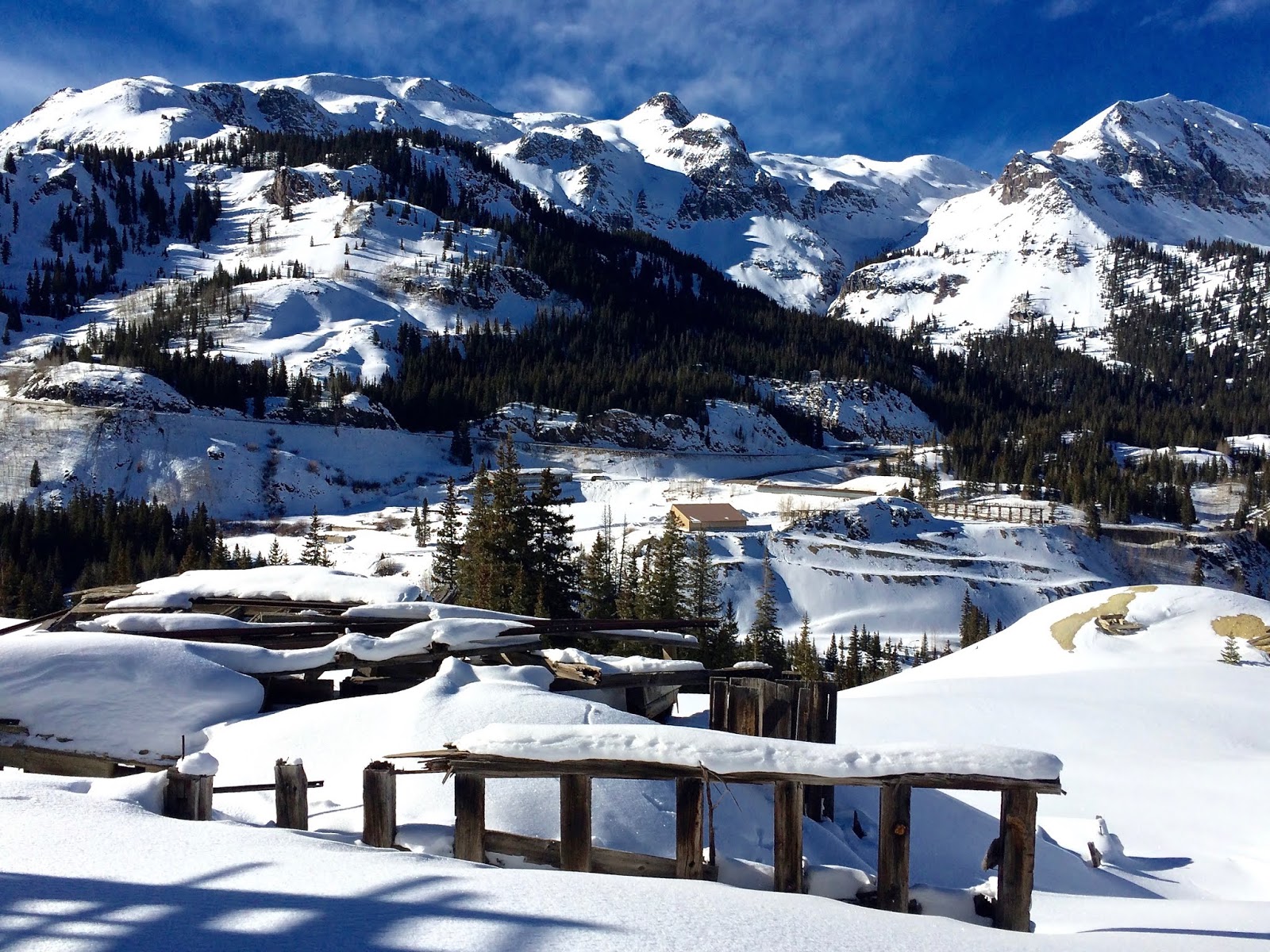 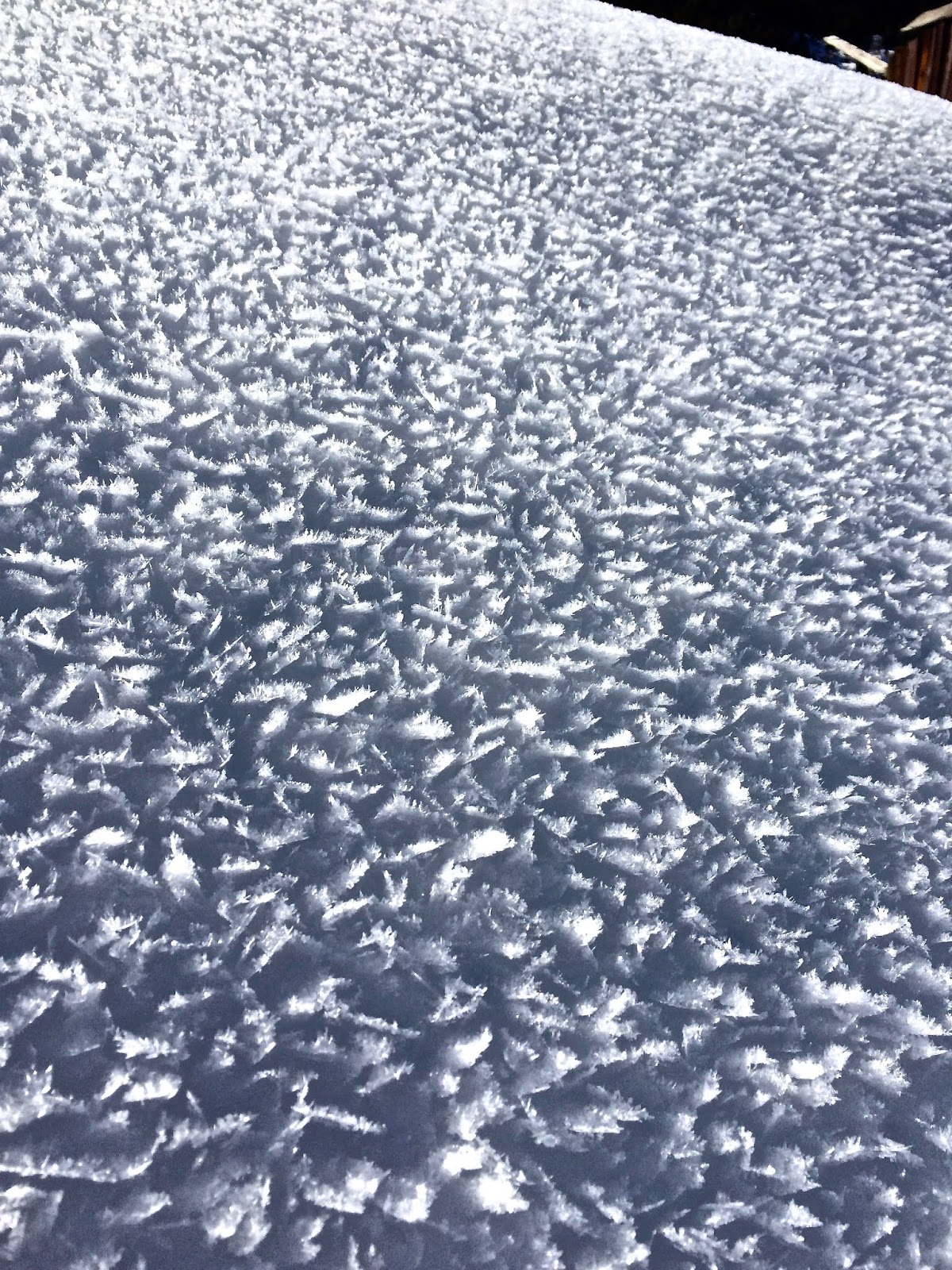 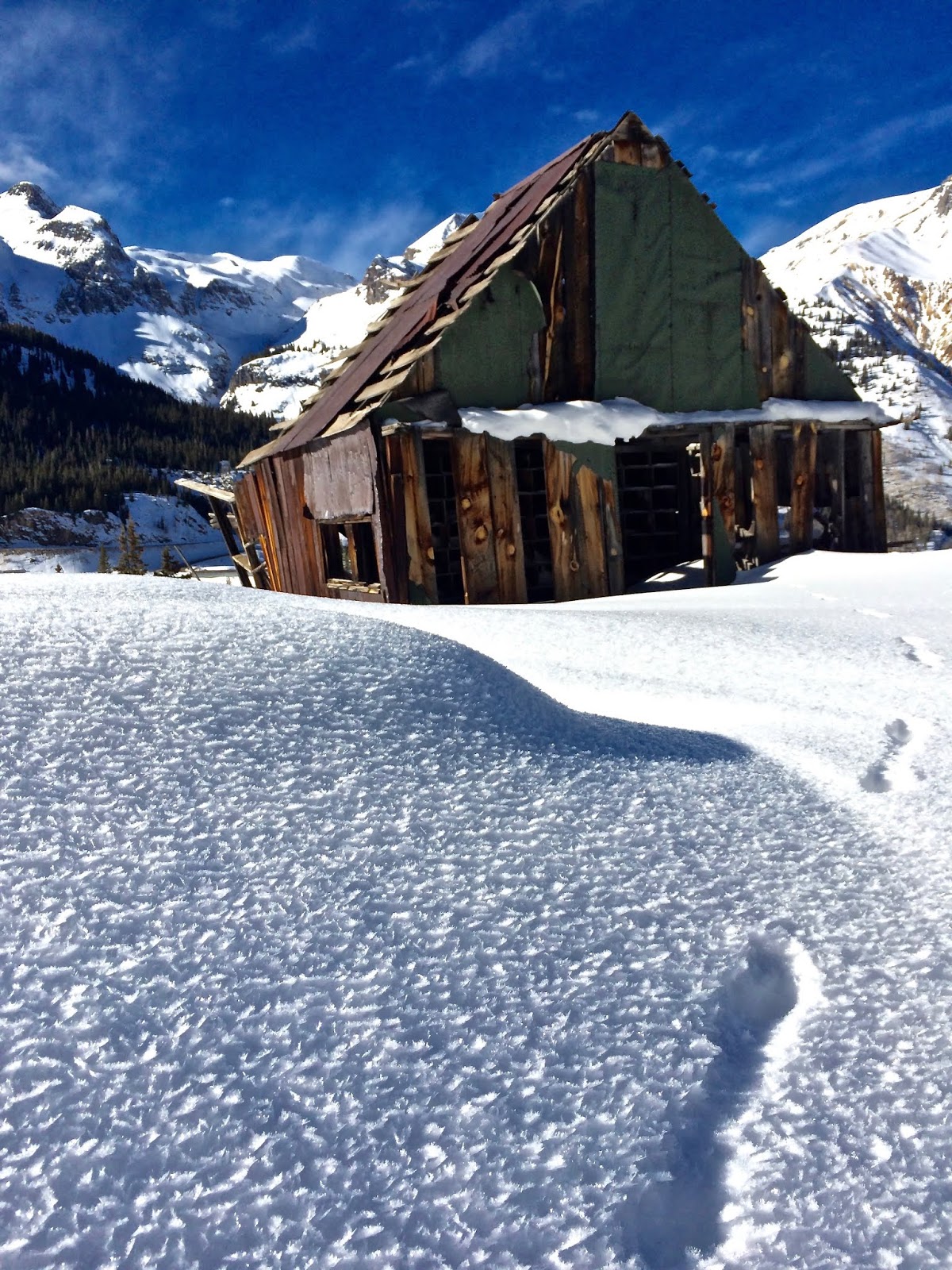 Even though I have taken hundreds of photos of this old mine shack, I still adore it. Judging from the storage cubbyholes inside, it might have been some kind of tool or gear supply depot for miners. 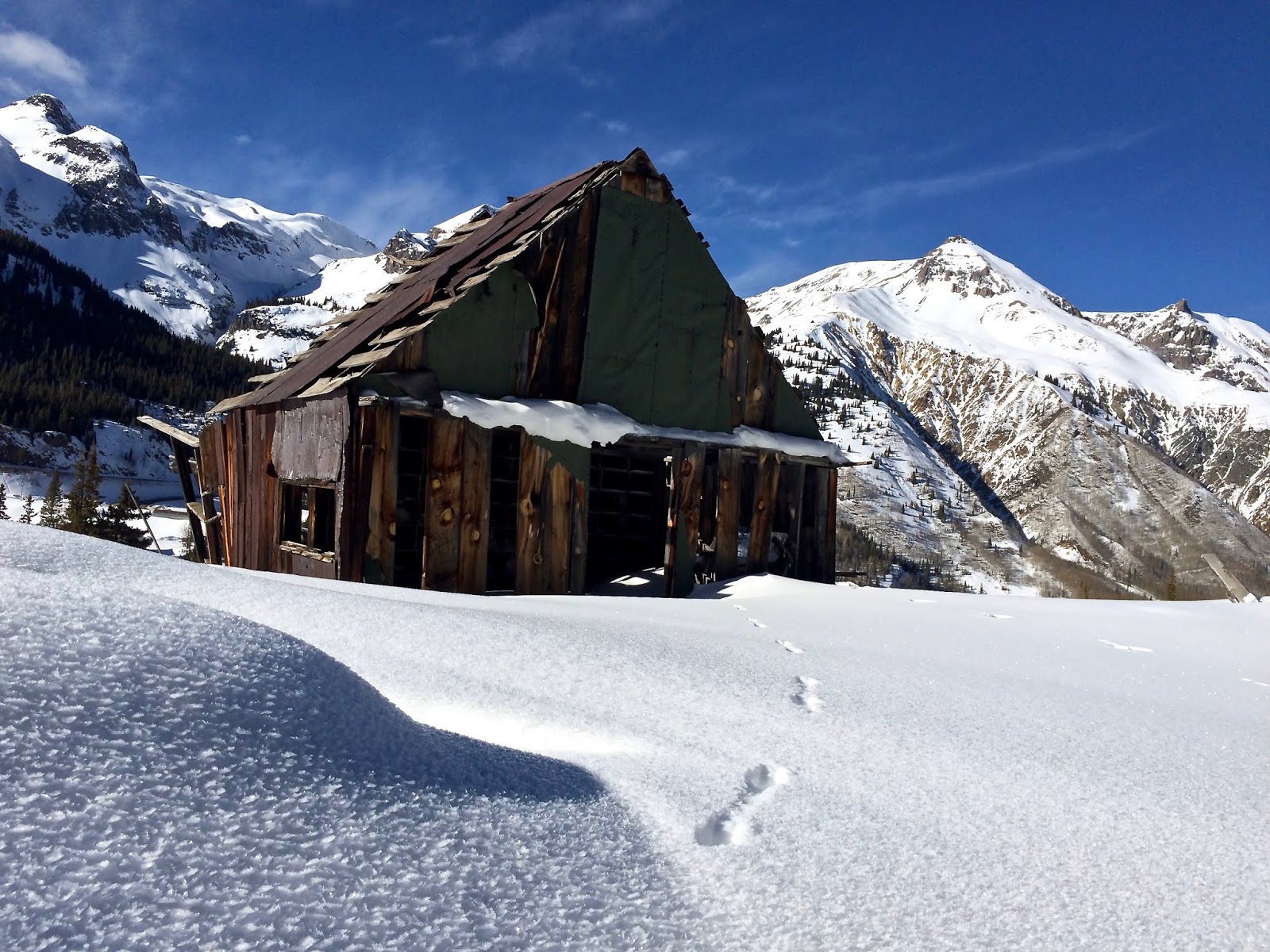 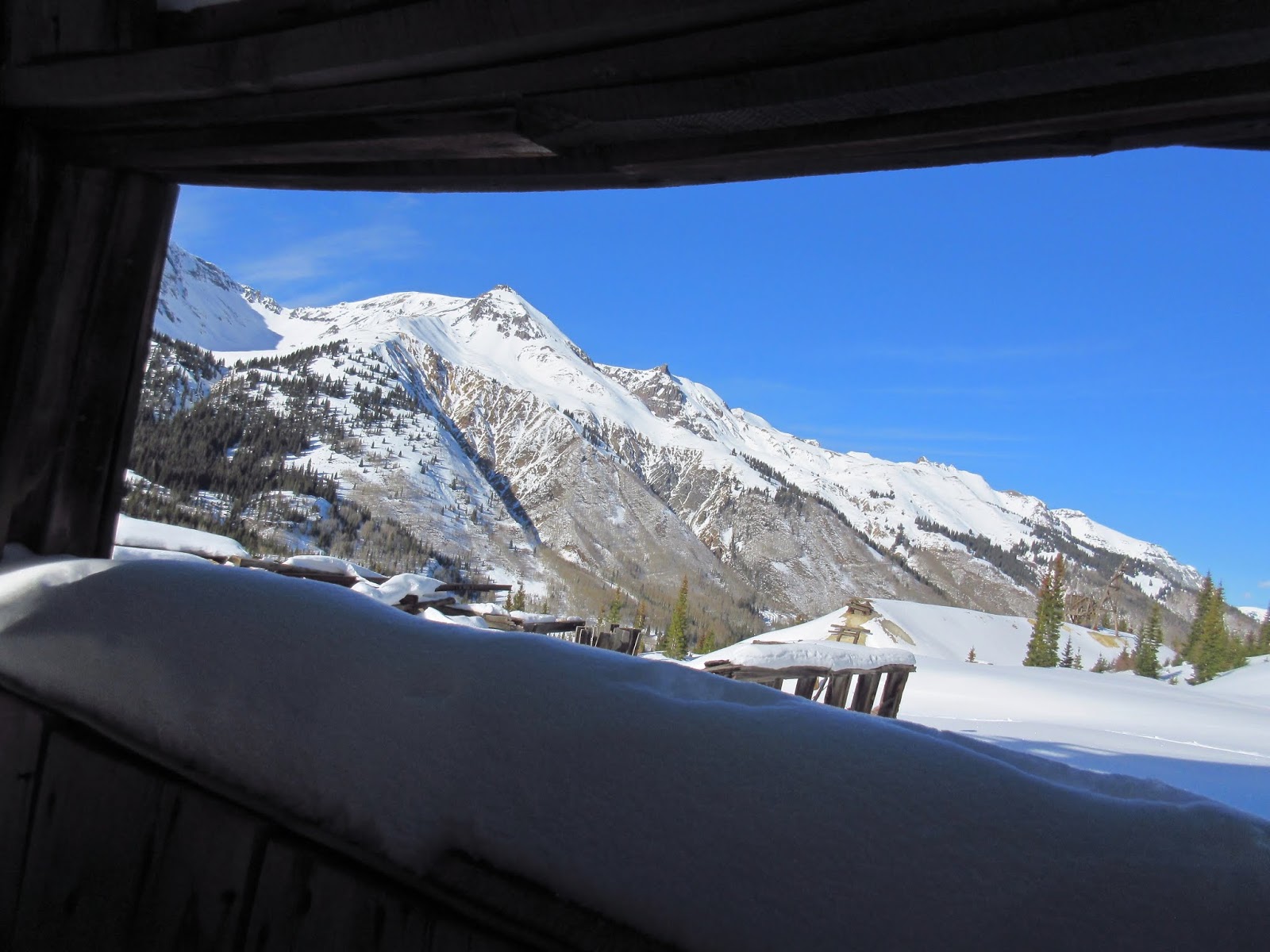 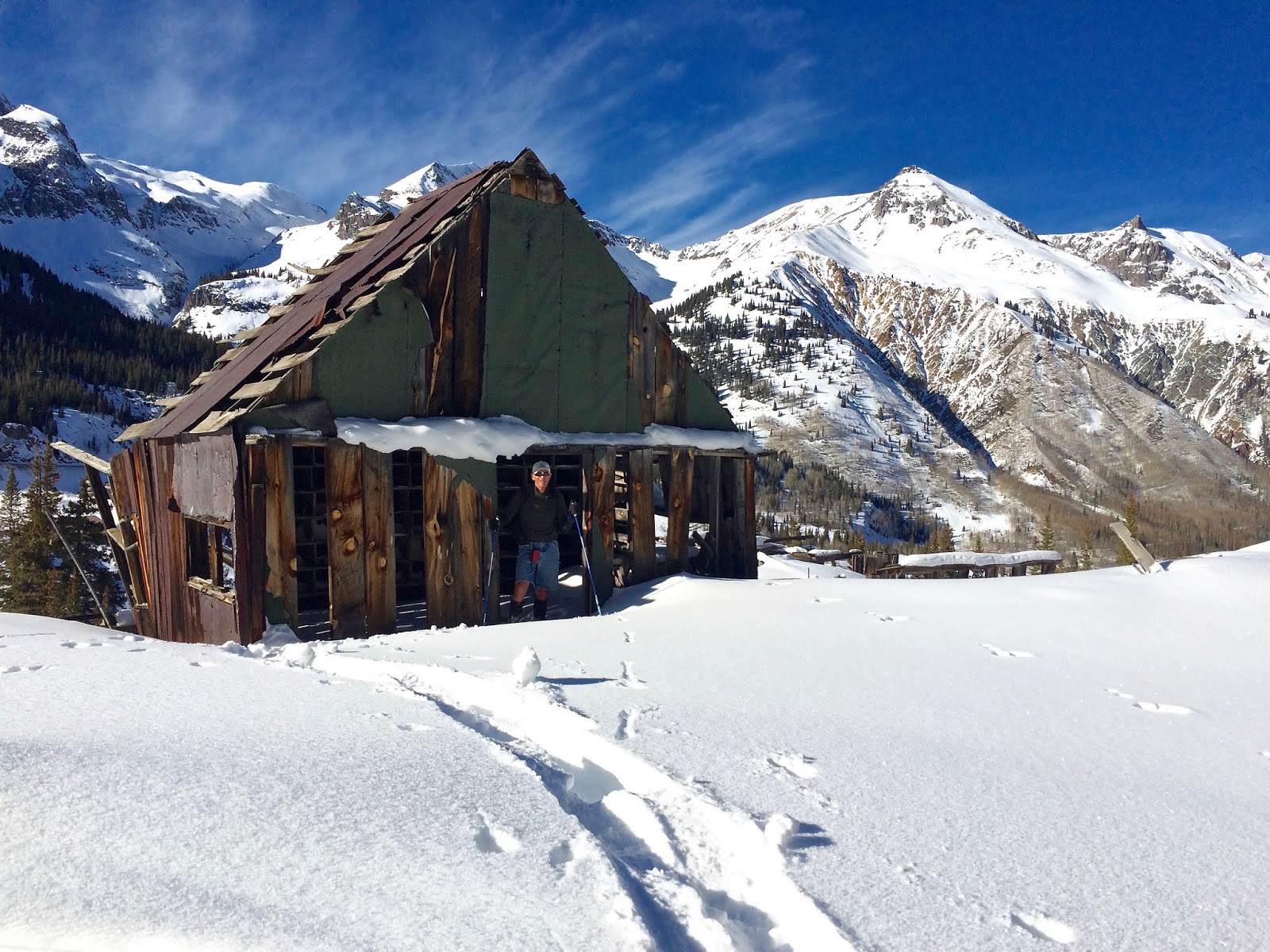 Peace out,
mark and bobbie
Posted by Box Canyon Blog.com at 10:11 AM