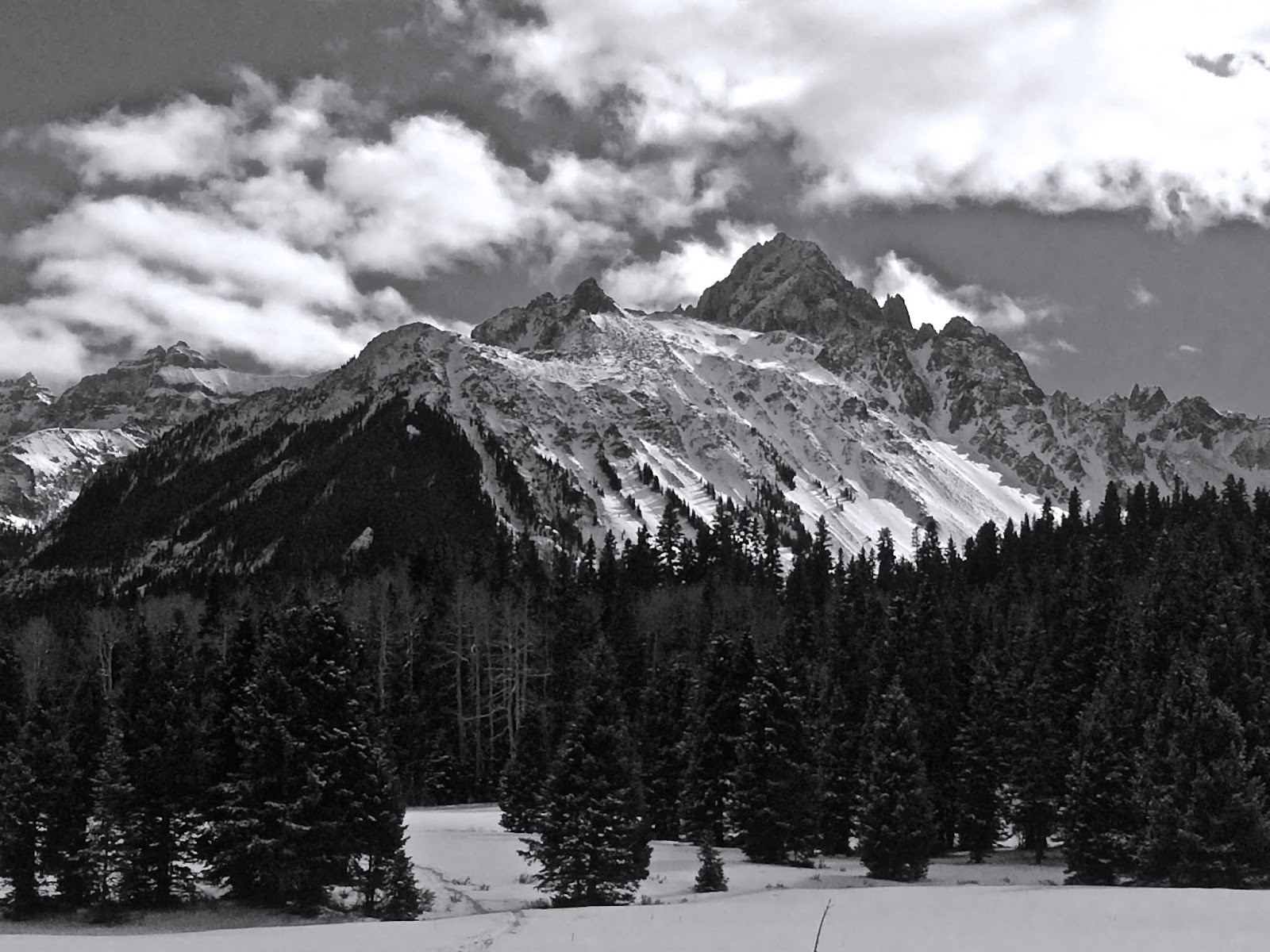 With repairs/closures on the Million Dollar Highway between Lovely Ouray and Red Mountain Pass, we were forced to seek alternative snowshoe playgrounds...preferably some "new dots."


Son, Caleb, and Dotter-in-law, Kelli, are back in Lovely Ouray for a few (actually, Quite a few) weeks. So we are having some outdoor fun with them as they try to re-aclimate from sea level to 8 to 13 thousand feet. 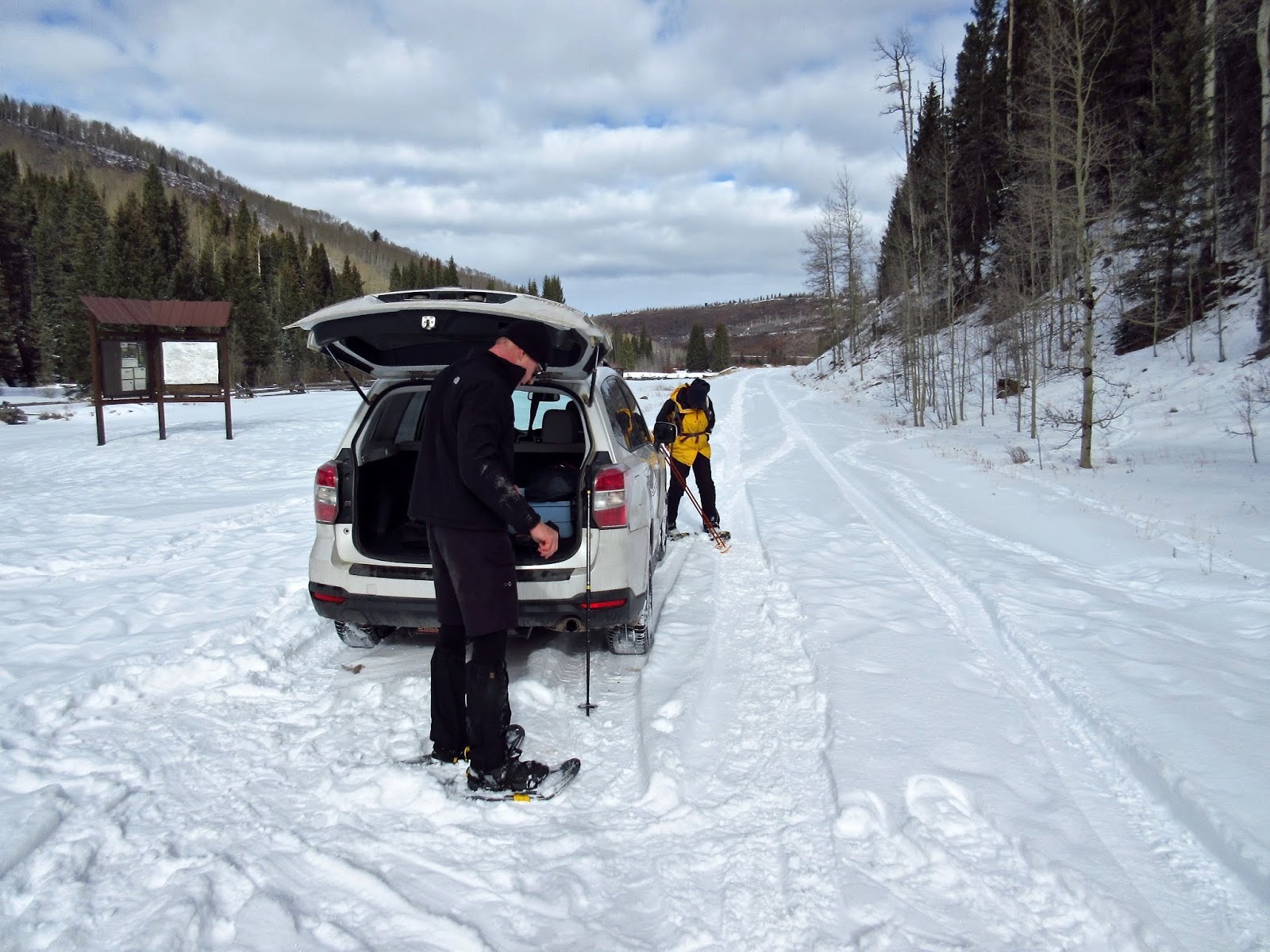 Kelli chose to stay home from this snowshoe adventure, opting instead for a massage, swim, and soak (a no-brainer). We decided to try a Blaine Basin snowshoe, if the road was not too snowed in yet. I suggested we should take Petroleous Rex over Sue Bee, just in case the road got sketchy. Well, guess what? Ole Pet Rex had a flat tire. It's Sue Bee or Nothing.

It felt weird to be heading North instead of South for an outing. We cruised through Ridgway on route 62 toward Dallas Divide. About half way there we hung a left on East Dallas Road; Ah, heading South again, aimed toward Mount Sneffels North face. Dallas Road is a long 8-ish mile haul on a gravel (read: mud/snow) county road. Dallas Road climbs steadily, to the foothill lap of Mount Sneffels, where it dead ends at two trailheads: "Blue Lakes" and "Blaine Basin."  Sue Bee was up to the task, in spite of tires two-third of the way to a recycle retirement. We were hoping to squeeze another 10,000 miles out of them once down in sunny Southern Arid-zona come January through March.

As you might suspect, about a mile from our trailhead destination, snow and ice became problematic. In hindsight, I should have stopped and parked where the sensible lady in a new Jeep did. But I made some comment like, "Chicken," and drove on, you know, like they do in Subaru commercials.

Long story longer...I eventually slid into a bar-ditch full of snow, got stuck and high-centered, with our snow shovel hanging safe and warm back home in the garage. Not such a good commercial. So we spent a good hour warming up for our snowshoe excursion by digging Sue Bee out of her predicament...inch by inch. Meanwhile, in the middle of our efforts to free Sue Bee, the Jeep lady snowshoes by. Lesson Learned?  Probably not... 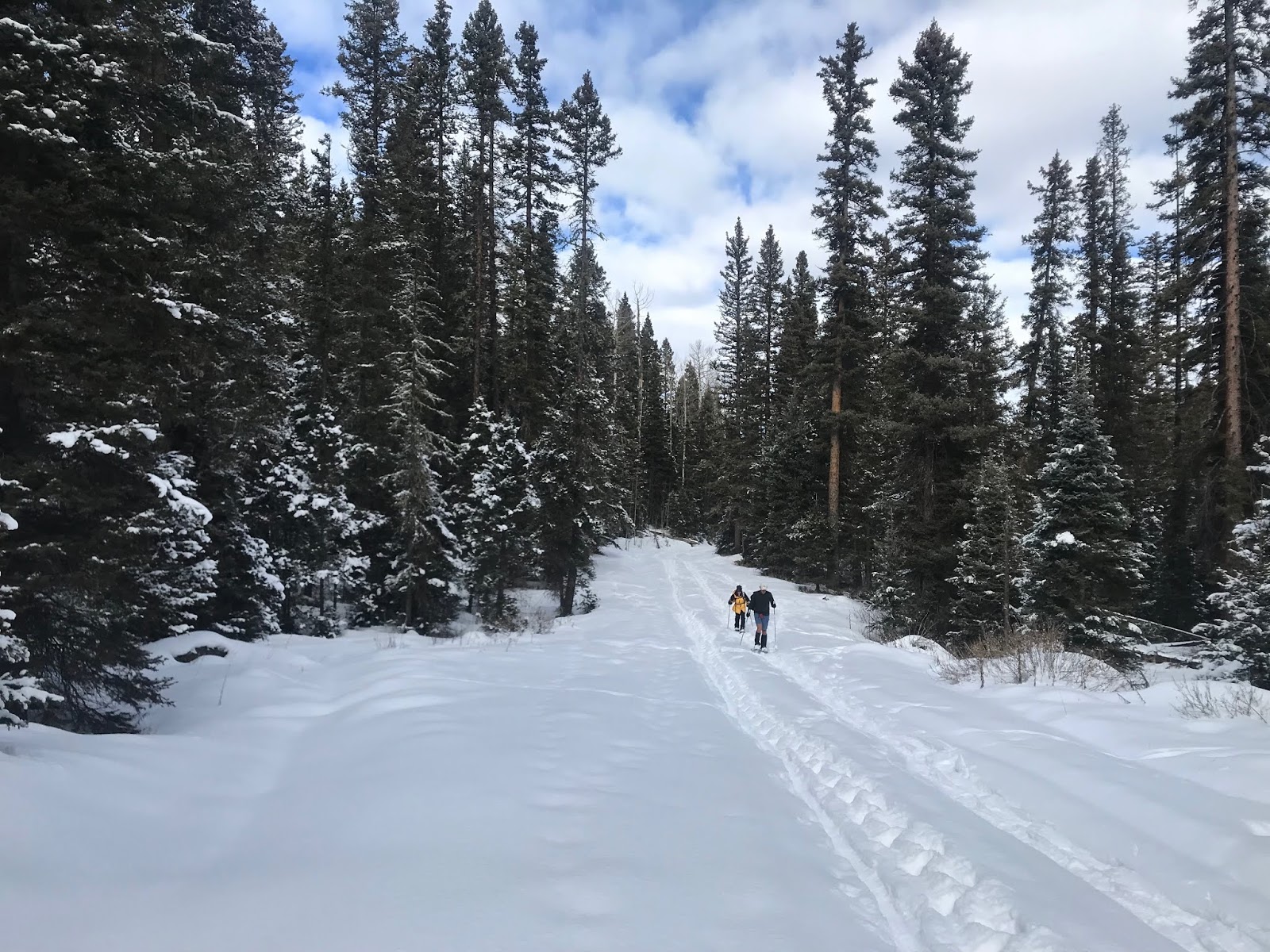 With Sue Bee dug out and pointed home, we waddled off toward Blaine Basin's trail head, following a couple fat tire bike tracks. Just shy of Blaine, the bike tracks turned west on some old Jeep trail so we paused to ponder a change of plans at the intersection. About then I vaguely recalled driving up that old Jeep road once...must of been at least 35 years ago. Seemed like it wound up a few switchbacks to a ridge top with great views of the Sneffels range. When in doubt, go for the view. We bailed on Blaine and followed the fat bike tracks. A mile later we see this guy coming down... 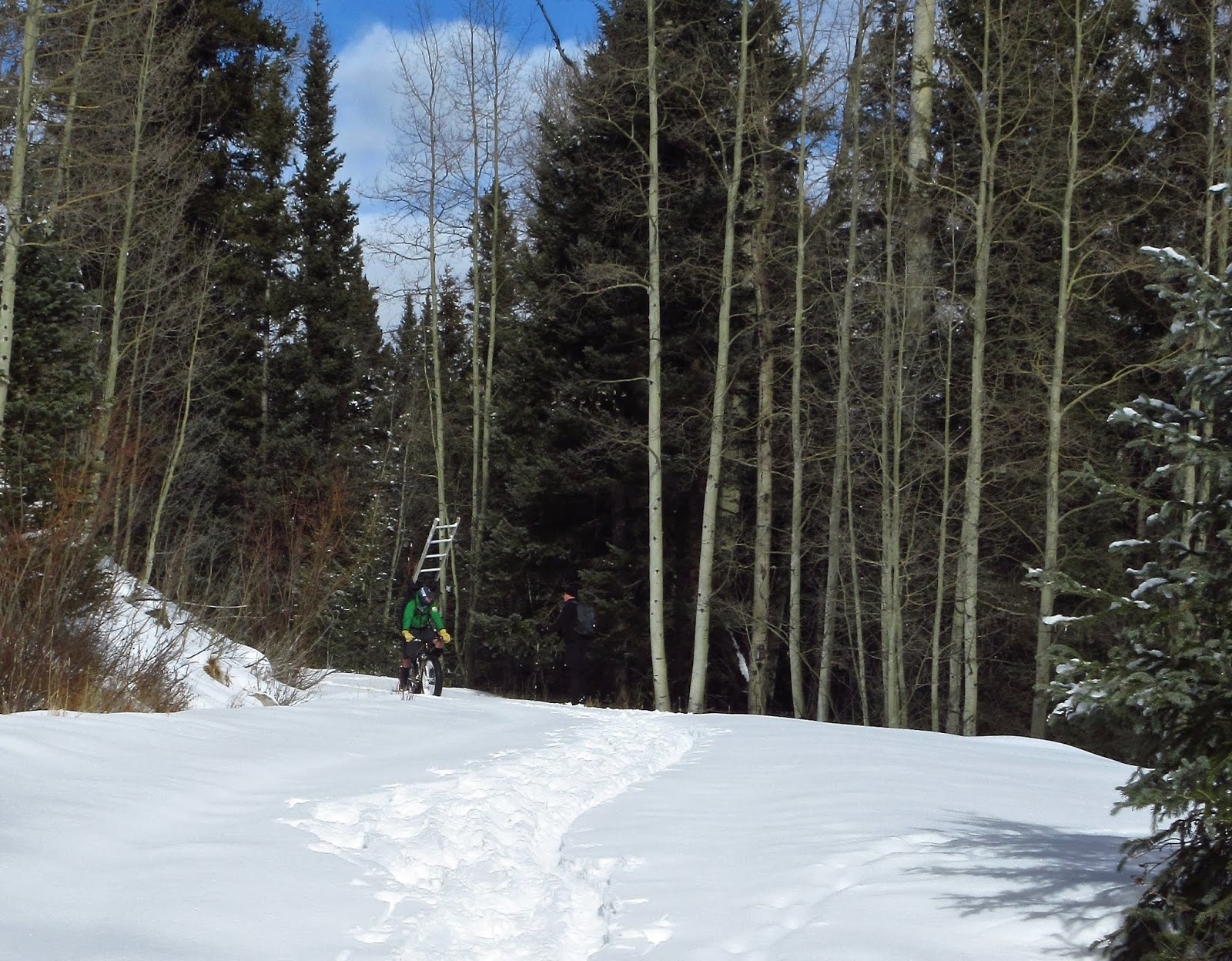 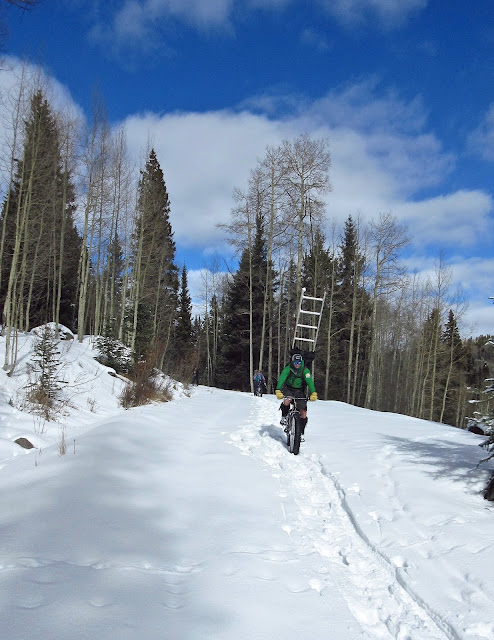 Well, you never know when you'll need a ladder on a backcountry fat bike snow-ride. But his girl-friend seemed happy. 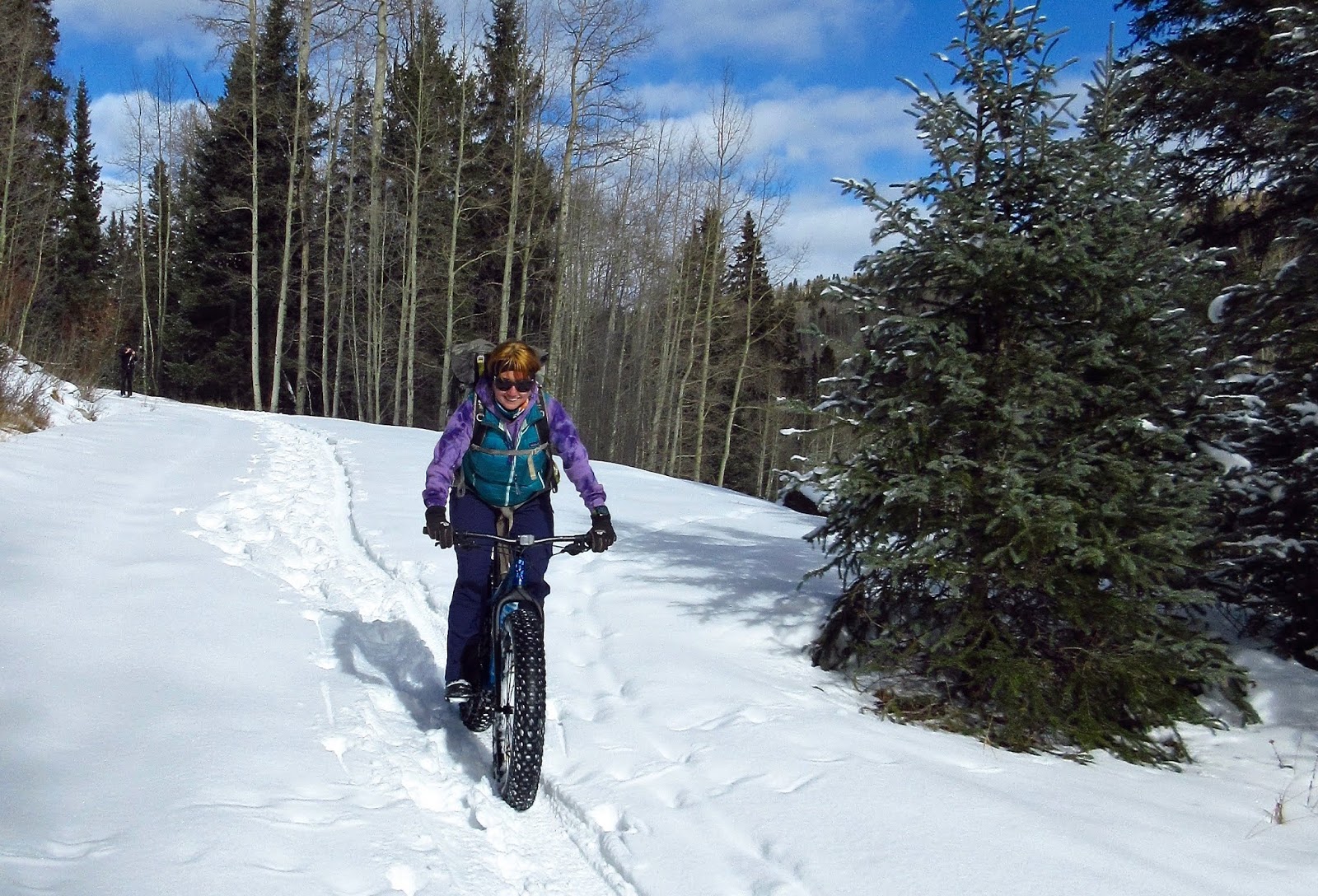 Blue skies slowly shoved clouds aside as the afternoon wore on and the old road petered into a trail. Onward and upward we slogged. 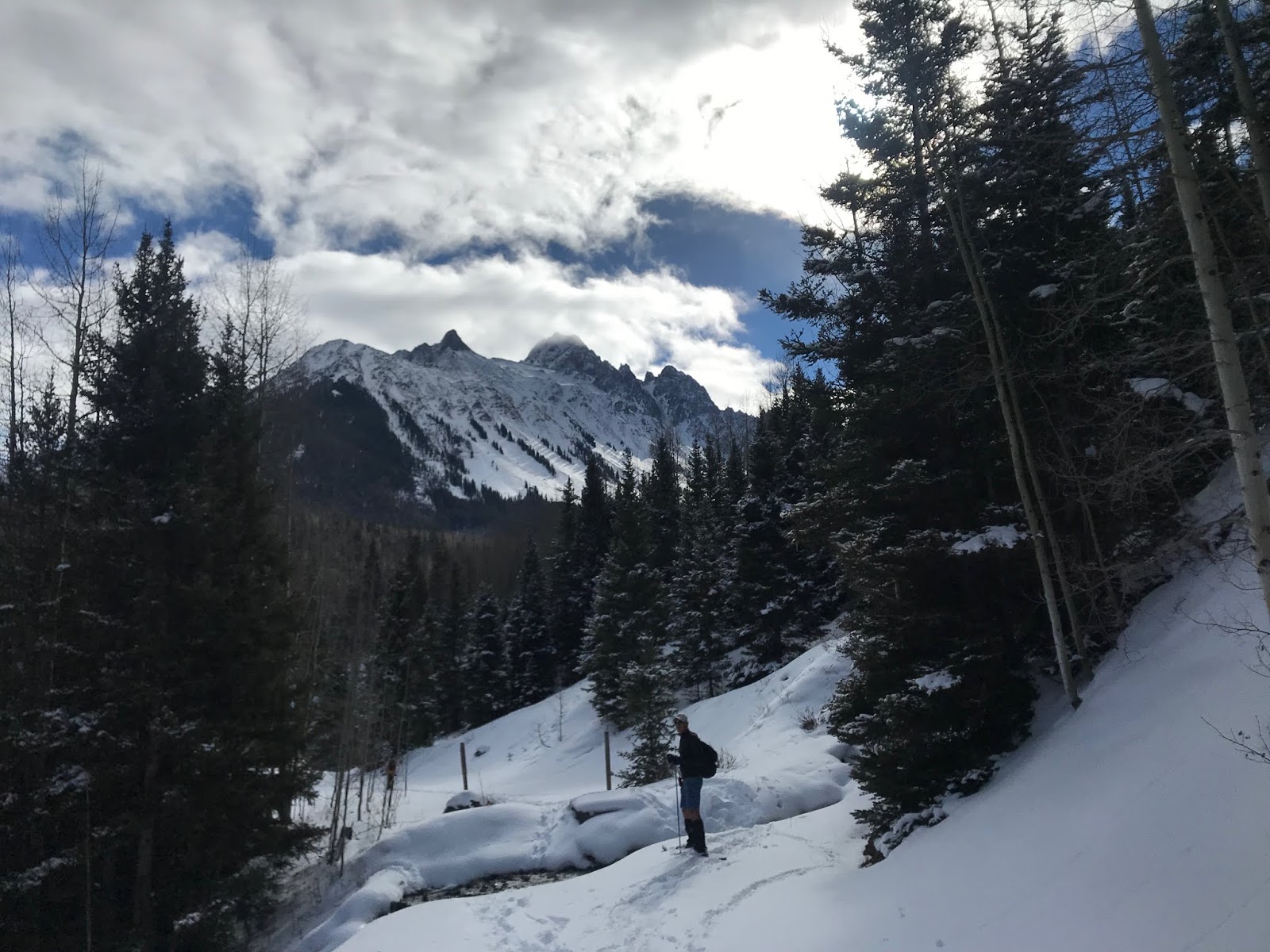 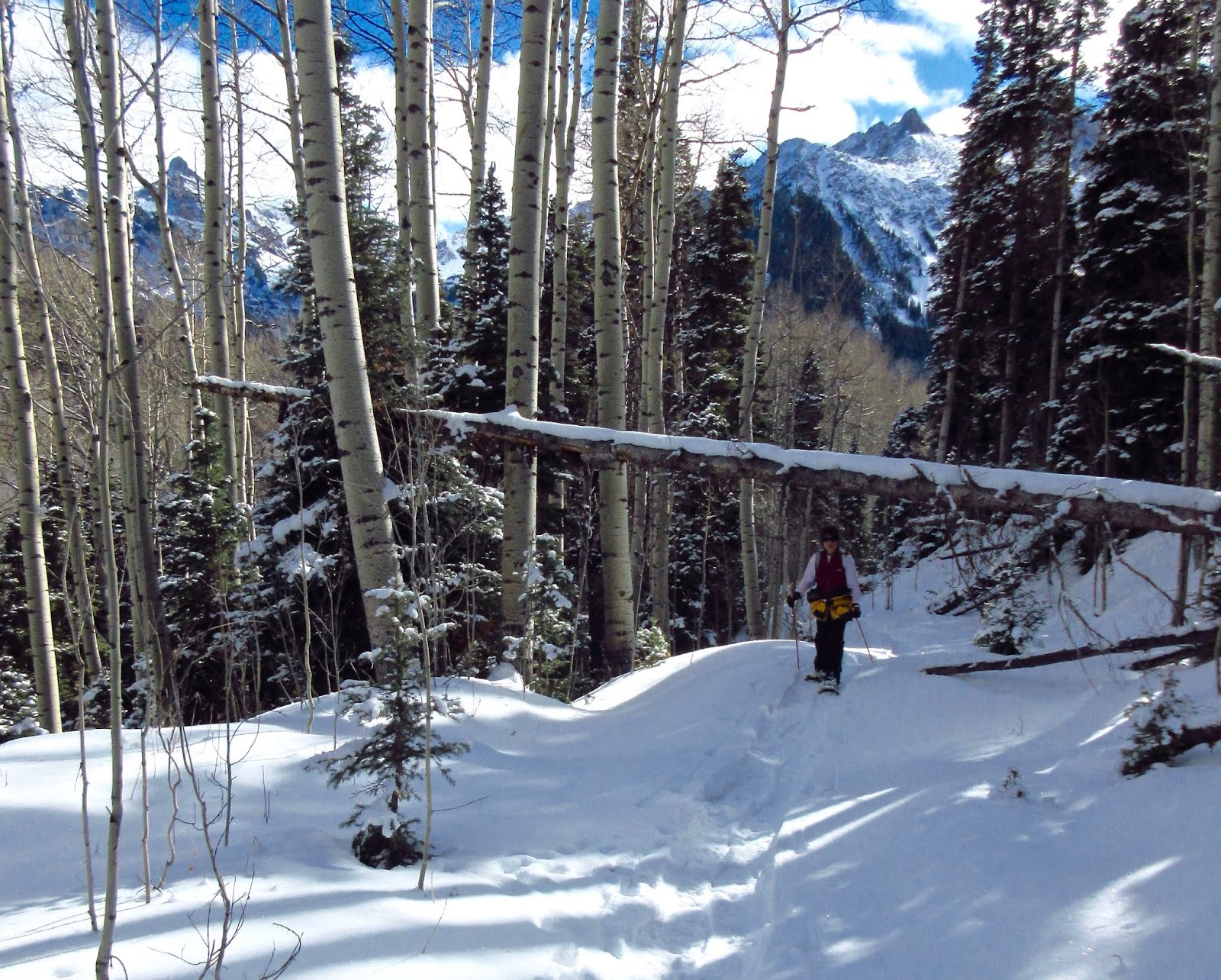 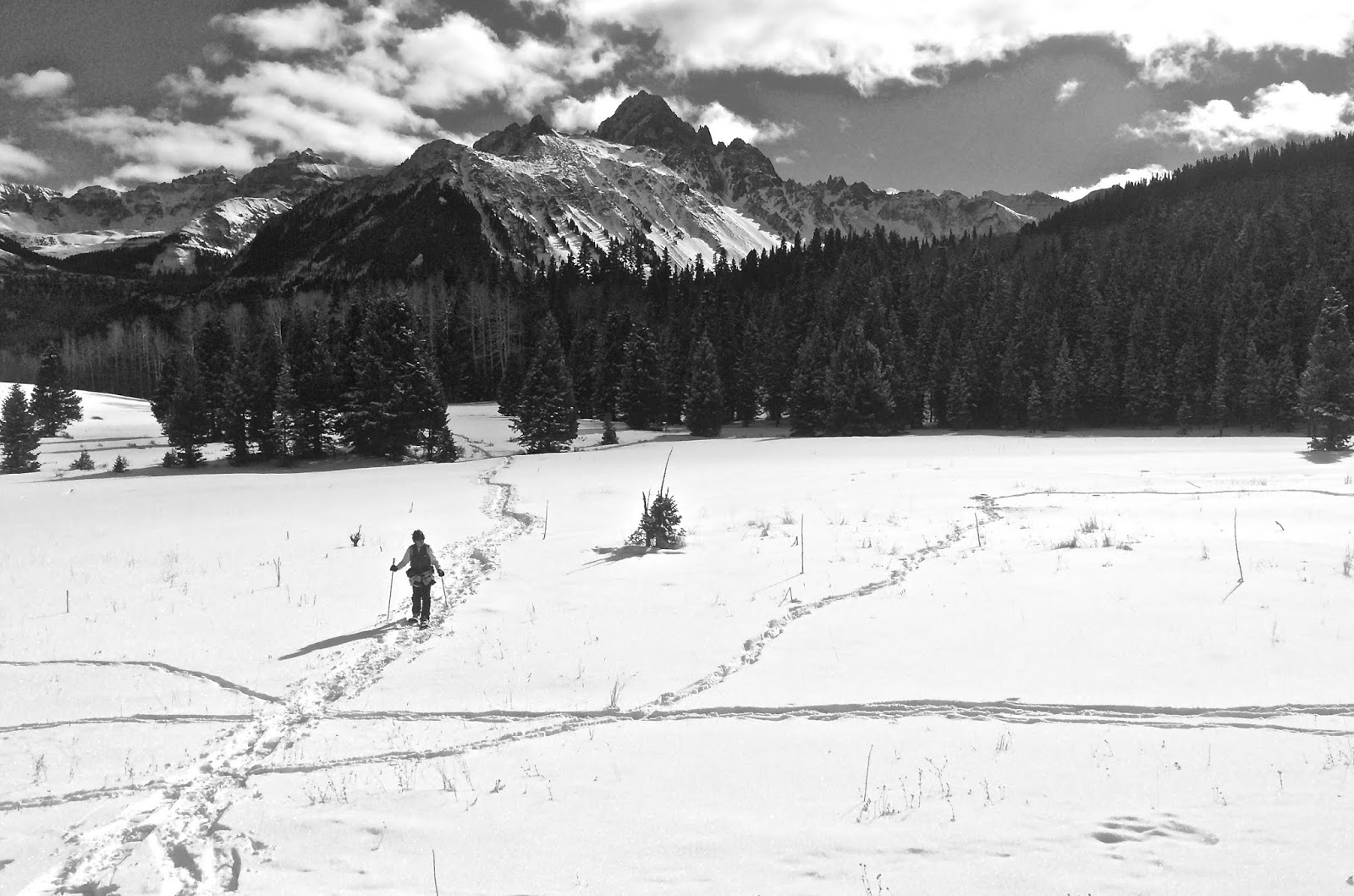 Suddenly, we broke free of forest into a spectacular, sun-kissed meadow. Ah, this was the view I recalled from long ago, only without snow. 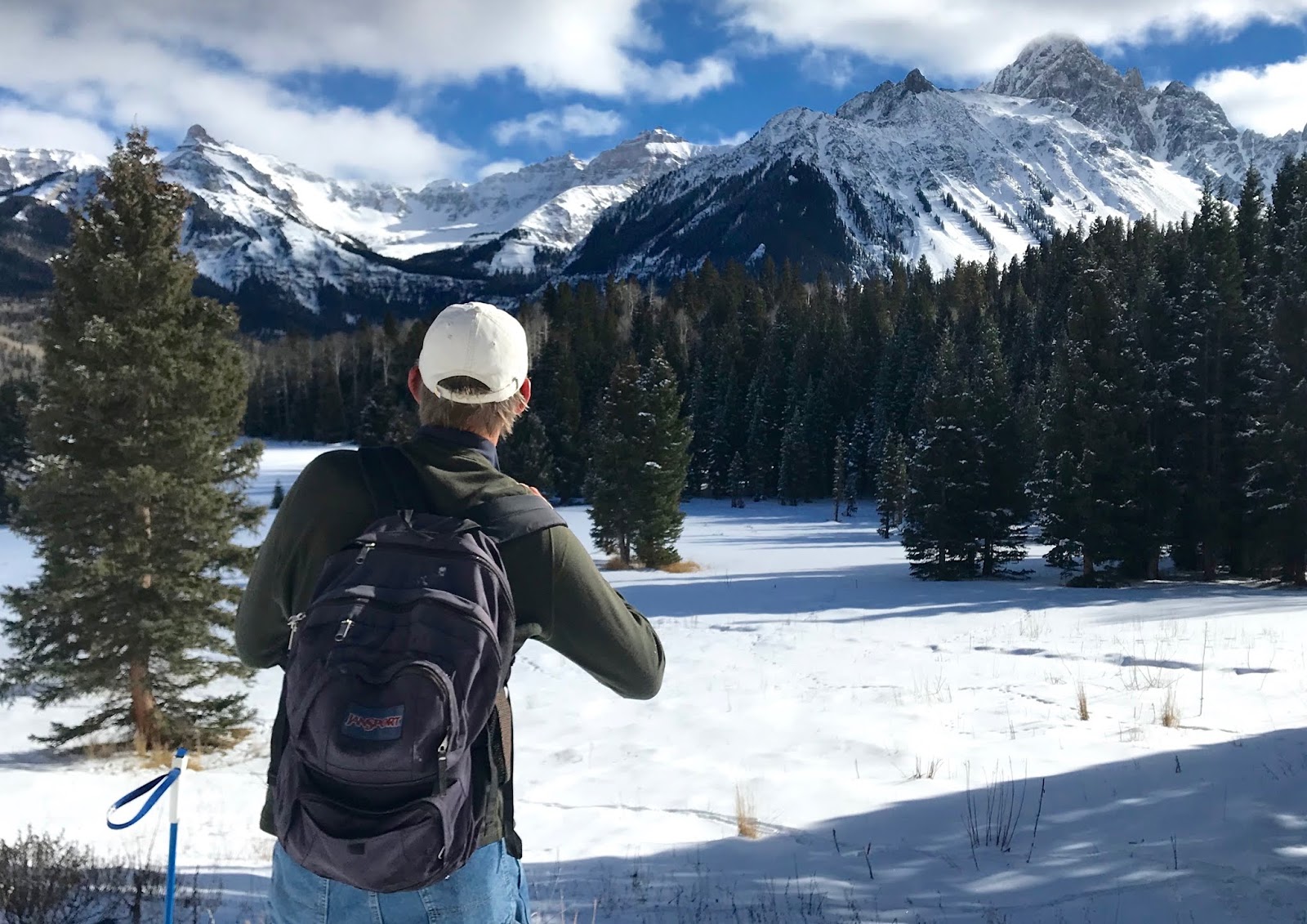 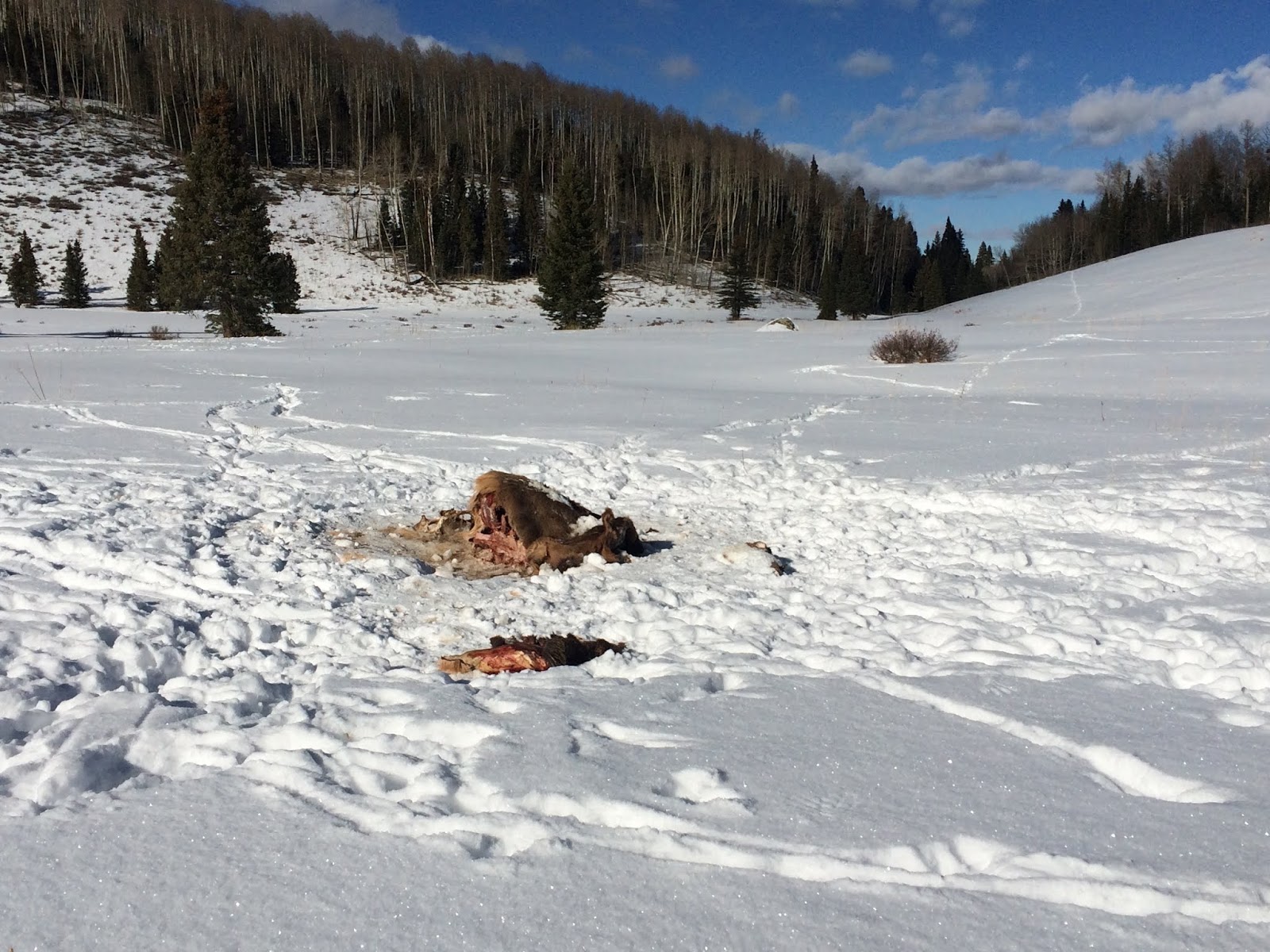 Caleb and I steered clear of what appeared to be a fresh "kill," fearing a mountain lion might misinterpret our intentions. Bobbie, however, snowshoed right up to it, looked it over, and said it was old and already eaten out. Whew! 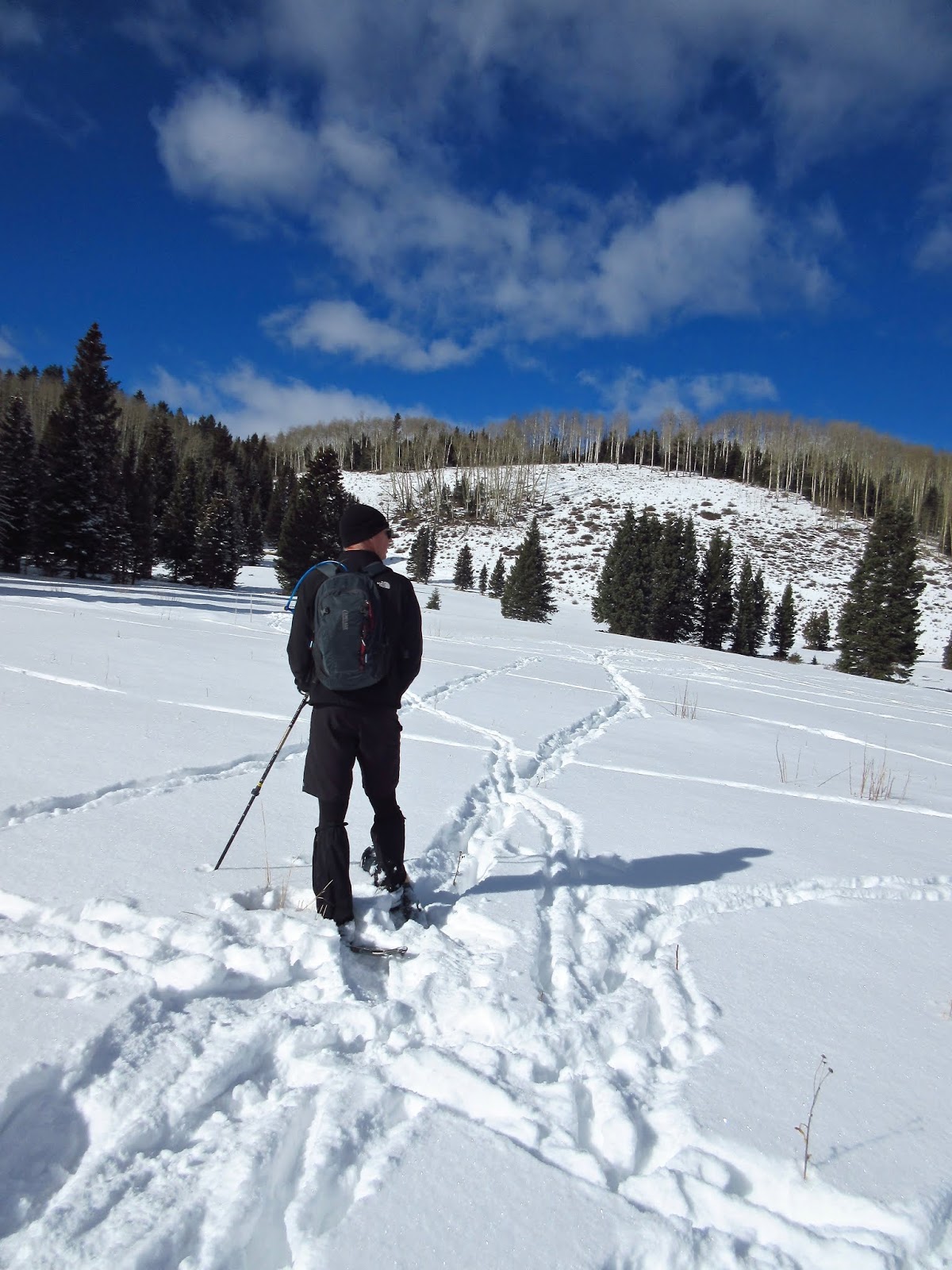 After a snack in the meadow we snowshoed on. The trail became a hit and miss affair so we just meandered through the mostly aspen forest. At least it afforded some views. I was grateful to be spending some quality outdoor time with son Caleb. After the photo, we decided to begin the long trek back to Sue Bee. Skies and clouds and light couldn't have been friendlier on the return trip. 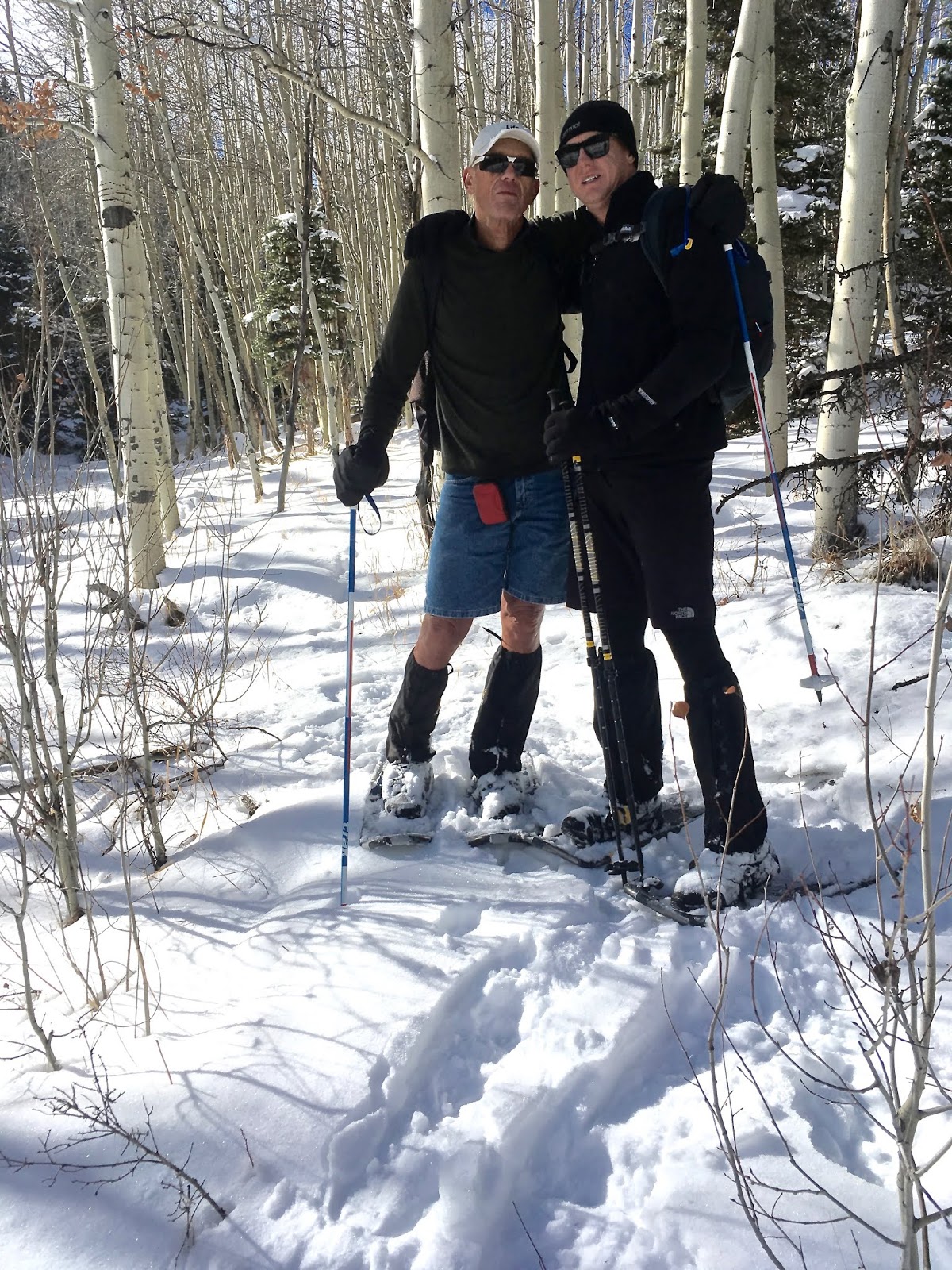 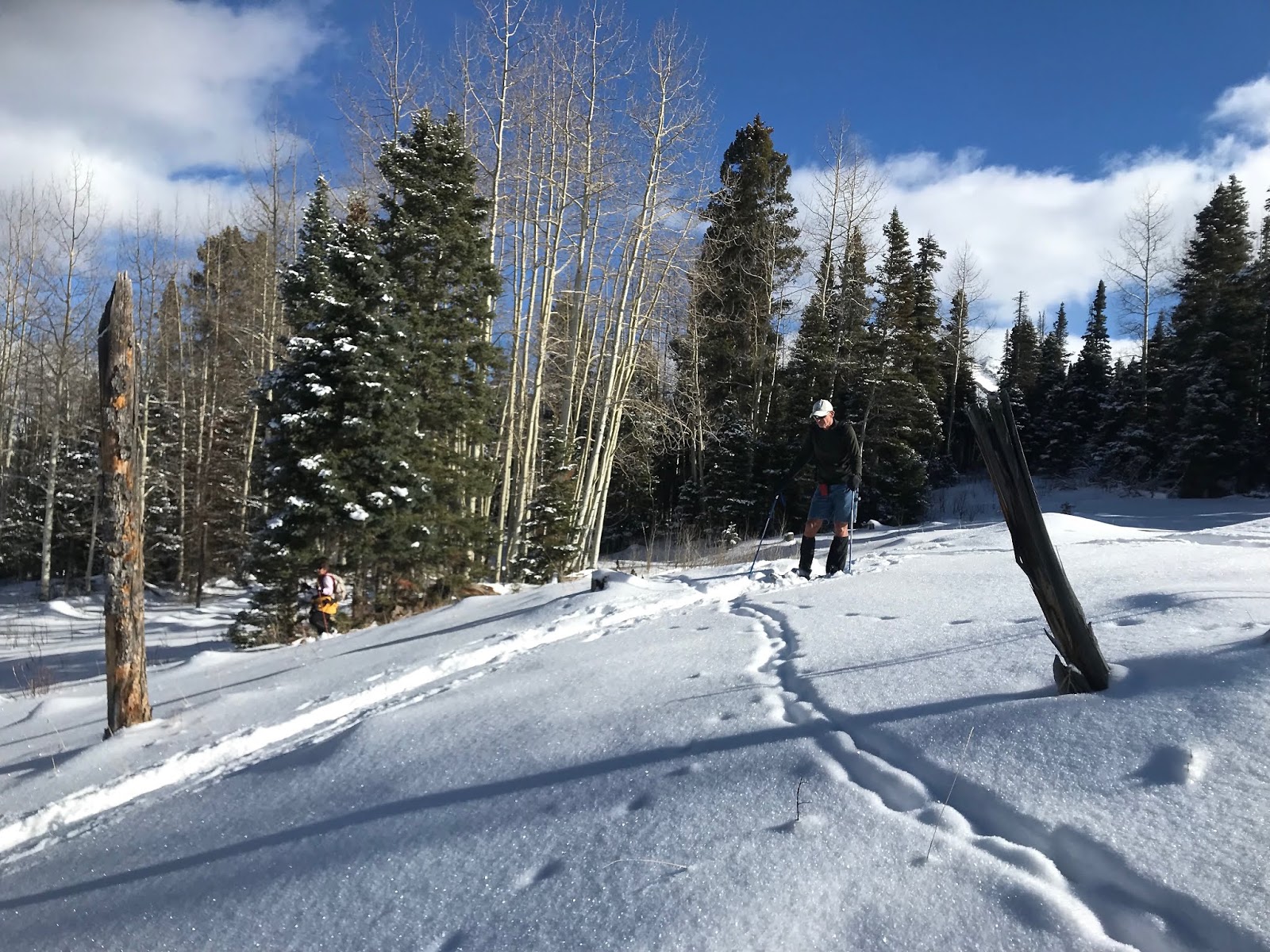 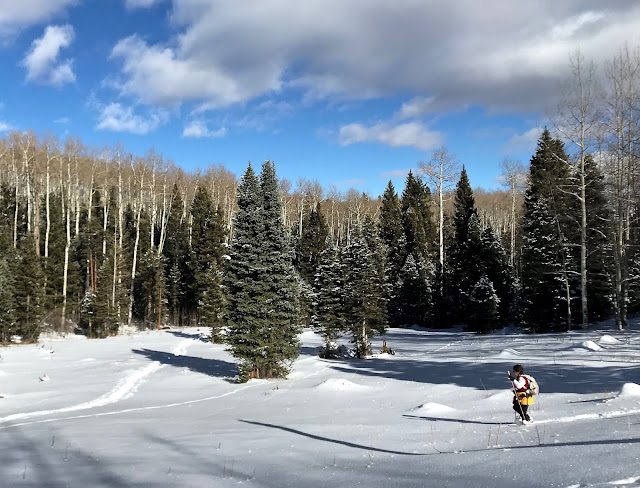 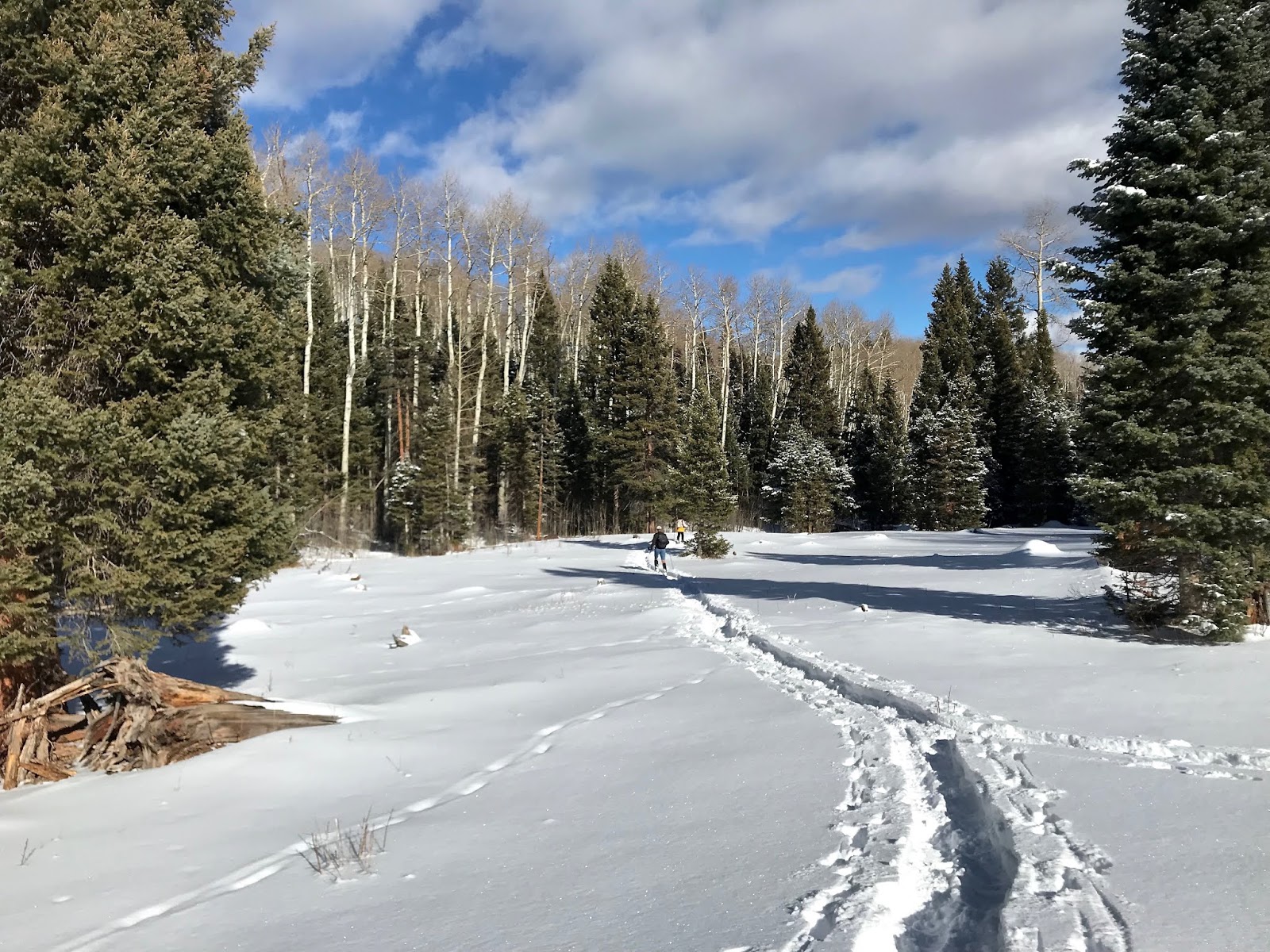 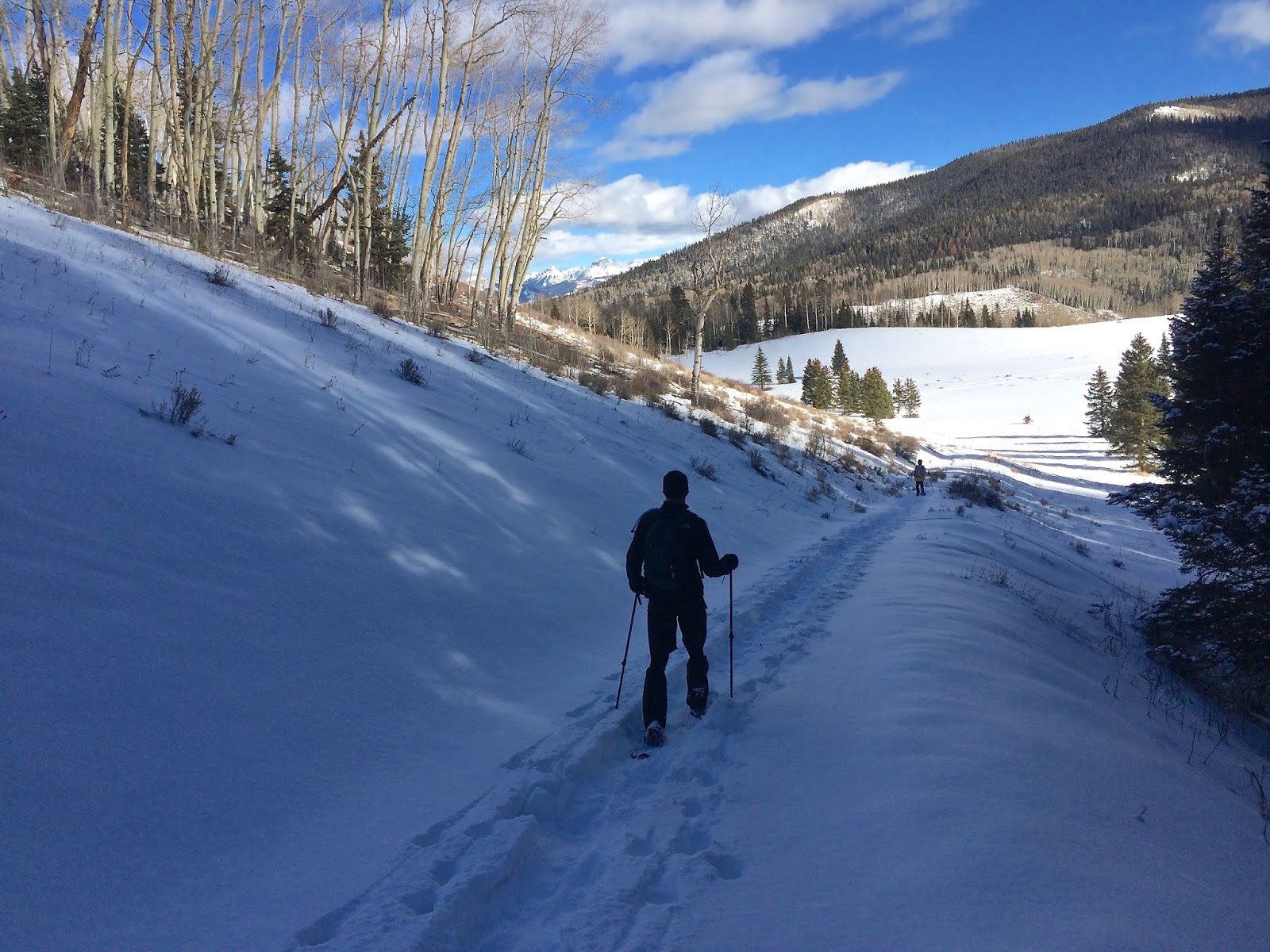 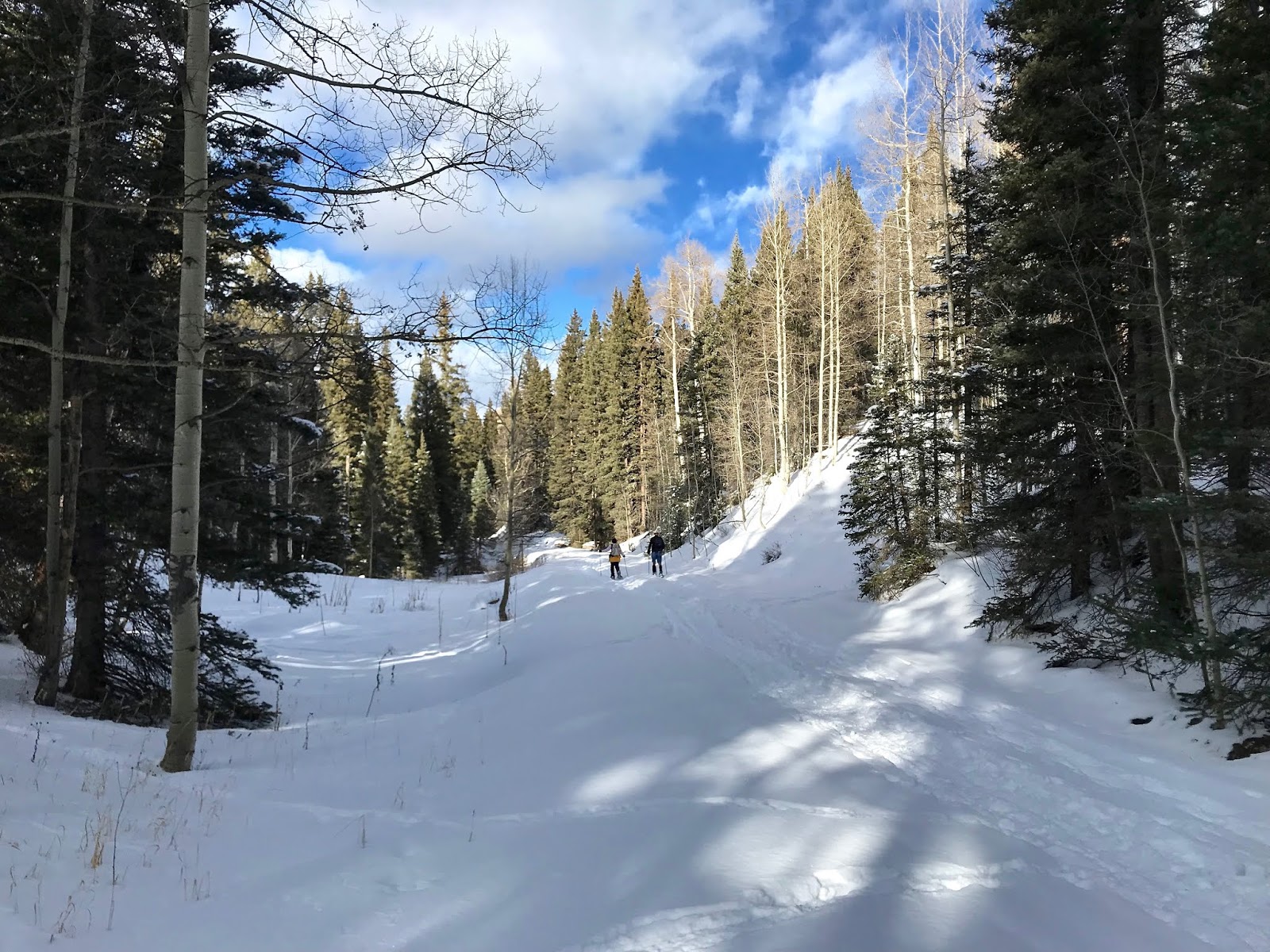 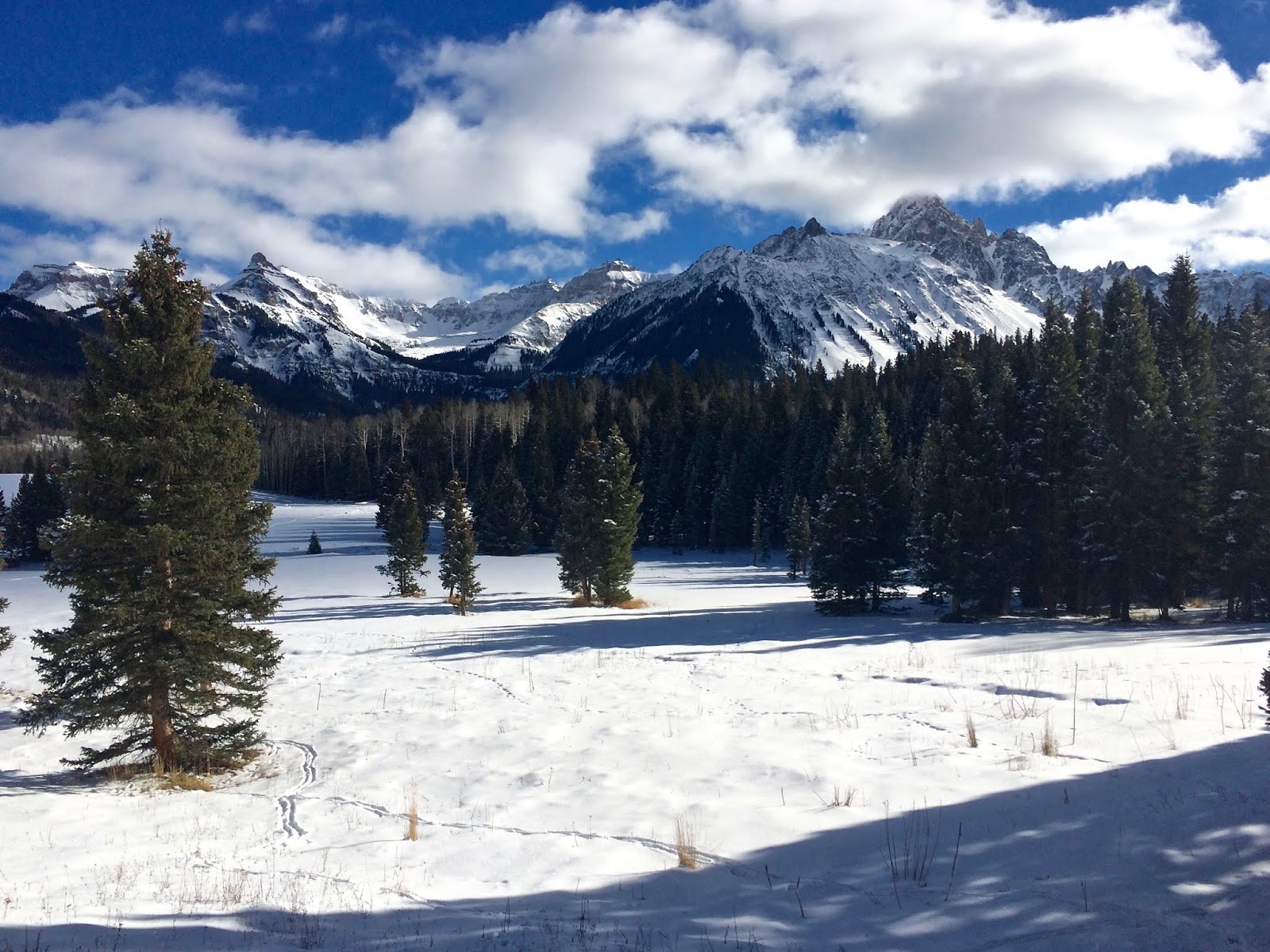 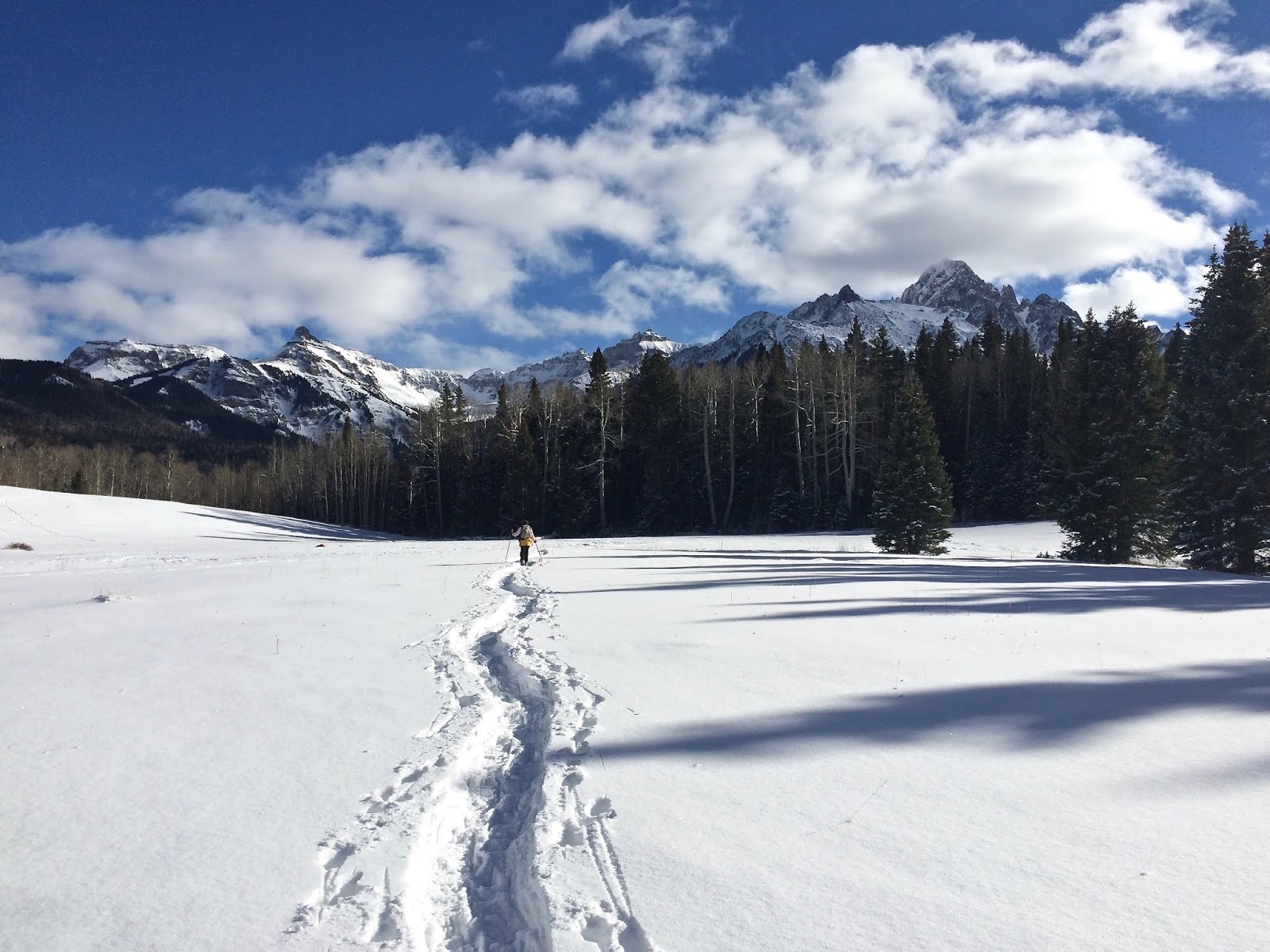 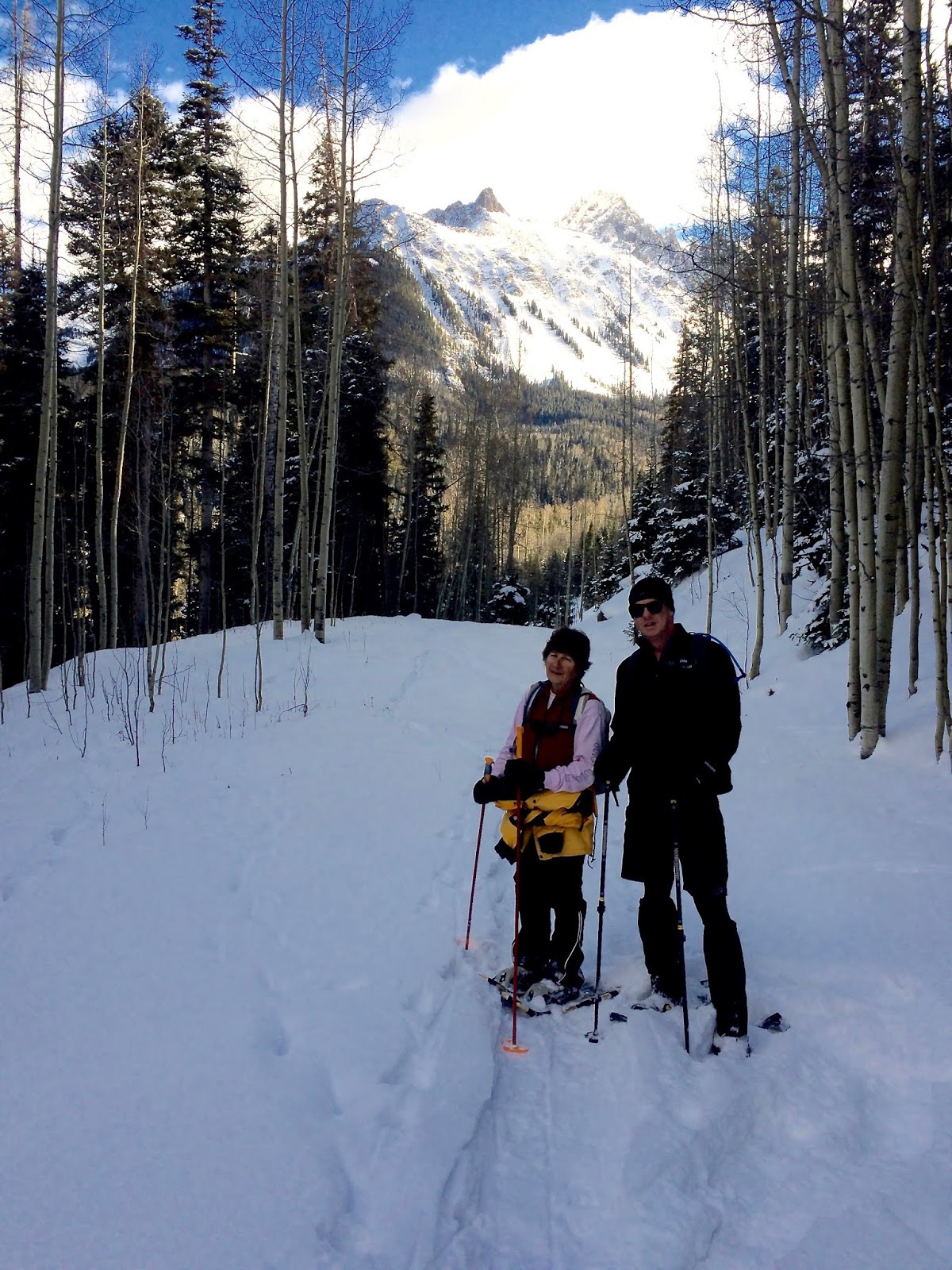 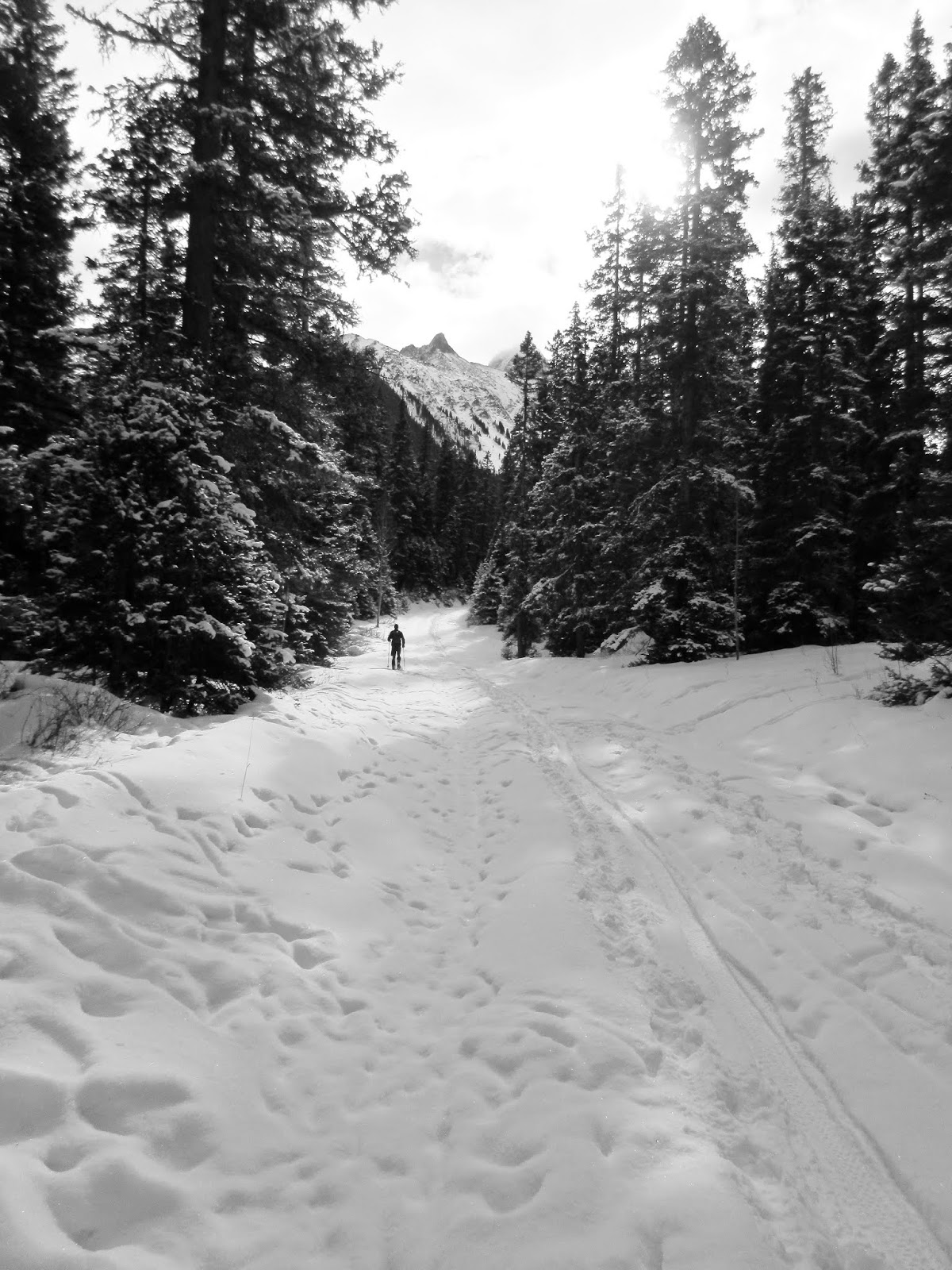 Below is a Panorama. Scroll →