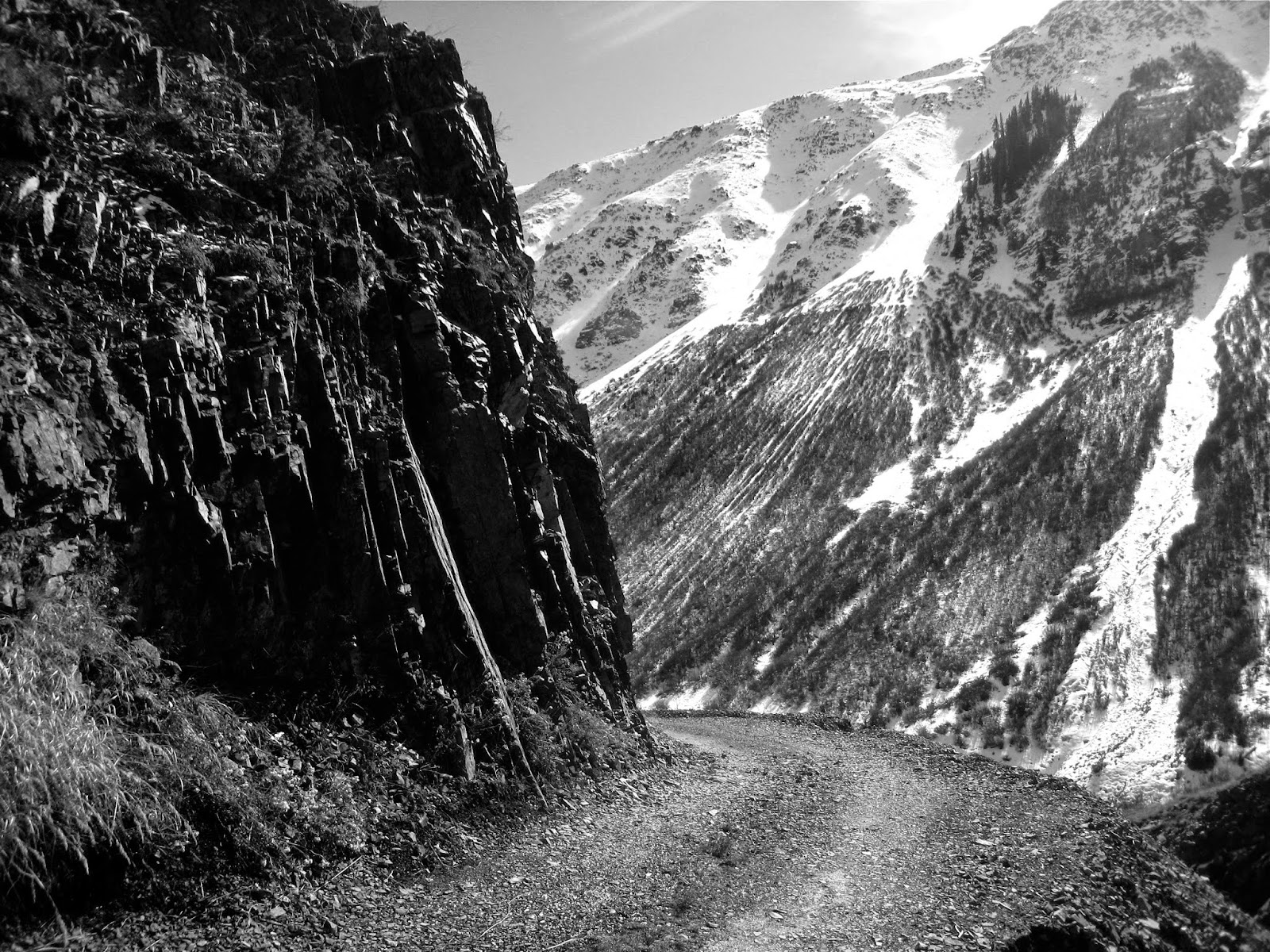 As we become more experientially enlightened (get older) we realize that nothing in life comes easy, that if we want to get "somewhere" it often requires pushing limits. Being experientially enlightened means that we have long realized that Life isn't fair. Life is like the mountain, in that regard, it doesn't give a lick if you fall to your death.


Now that I'm on the short end of life's fuse, time is no longer a luxury I can squander like some youngster. When I was a teen, 35 seemed old. I couldn't imagine living that long, my parents—hell, everybody's parents—looked old and over the hill. Now, pushing 65, I've noticed an impostor in the mirror. Who is that guy?


That point was really driven home when I came across this old photograph of Nephew Brent and I on the way up Bierstadt make that Quandry—one of 54 peaks in Colorado over 14,000 feet, 50 of which Bobbie and I have summited... some multiple times. I think Brent was about 21 years old when this photo was taken, which would have put me… well, let's just say "pushing 40." I don't know why we are both wearing Hot Pants. I guess (hope) it was in style.


Wow, the second thing I noticed about the photo was how much smaller our foreheads were. Today, Brent and I both suffer Male Pattern Baldness, an ego disabling disease that has no known cure (sniff).

Already bored with our familiar hikes, I pronounced it "Adventure Day in Lovely Ouray" and prepped the old 29'er for a ride up Camp Bird Mine road… hopefully, to the Mine itself. Bobbie said, "Have fun," meaning she didn't want any part of silly macho male antics. Did I say, "ride?" Make that "grind," as the elevation gain is 2000 feet in less than five miles. 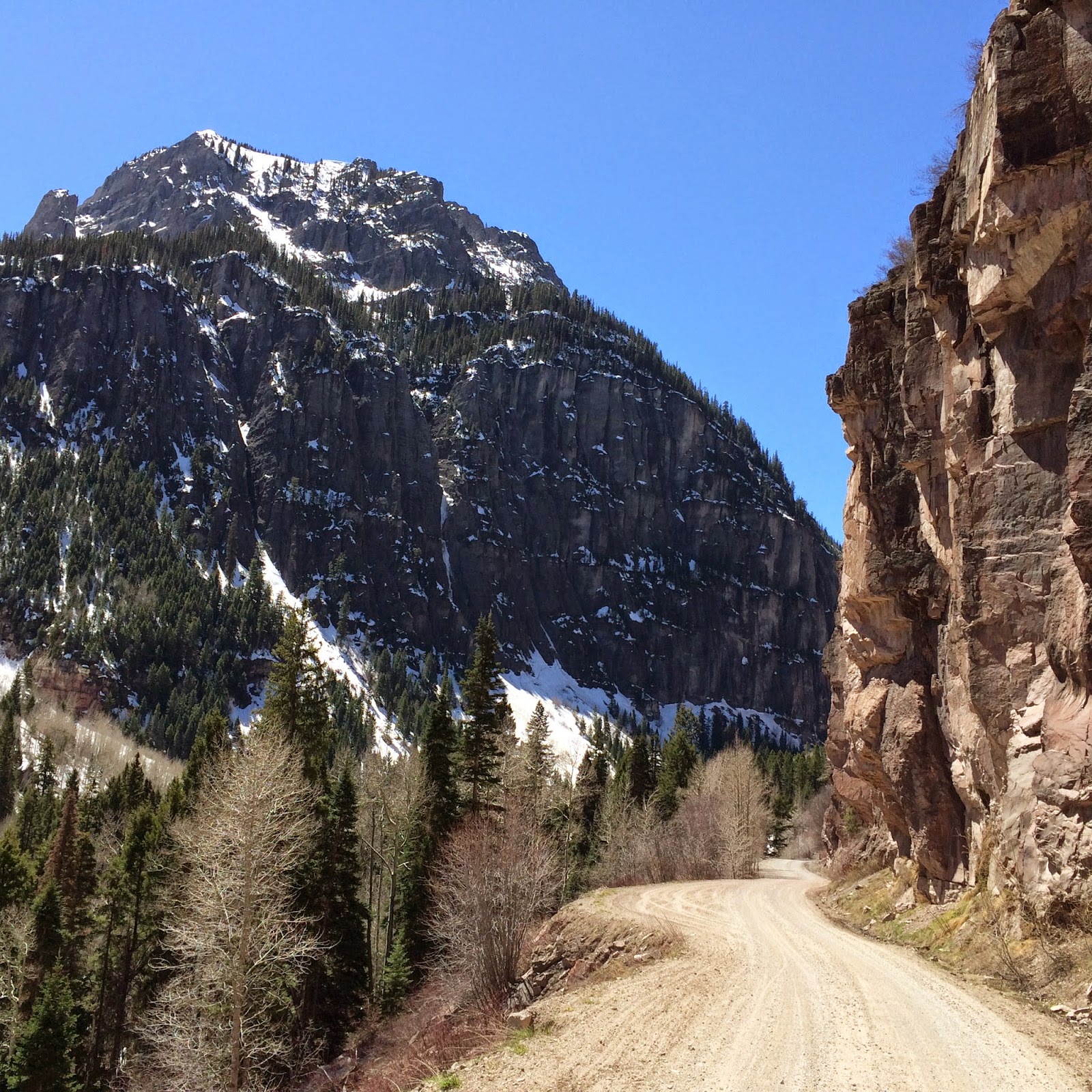 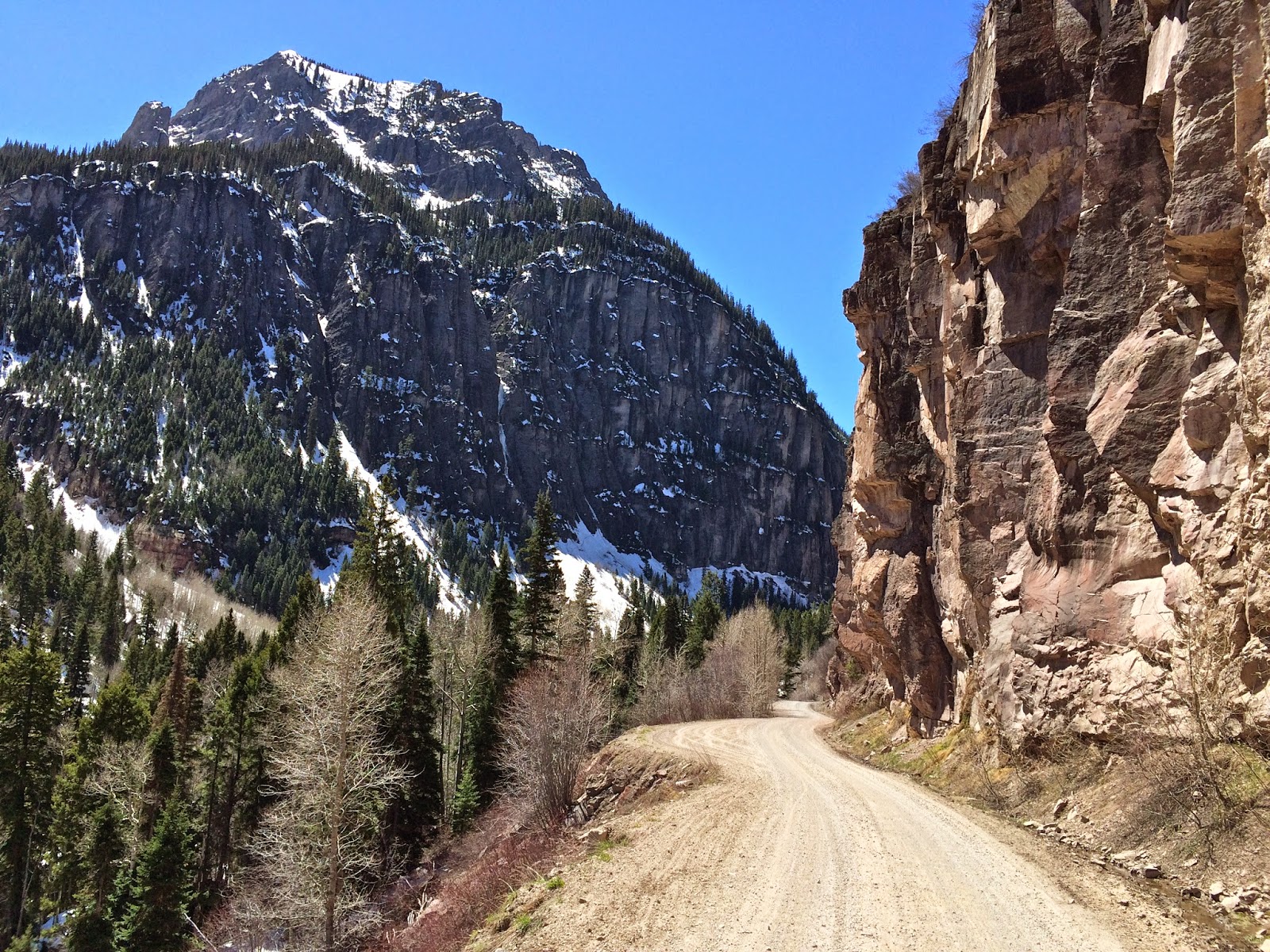 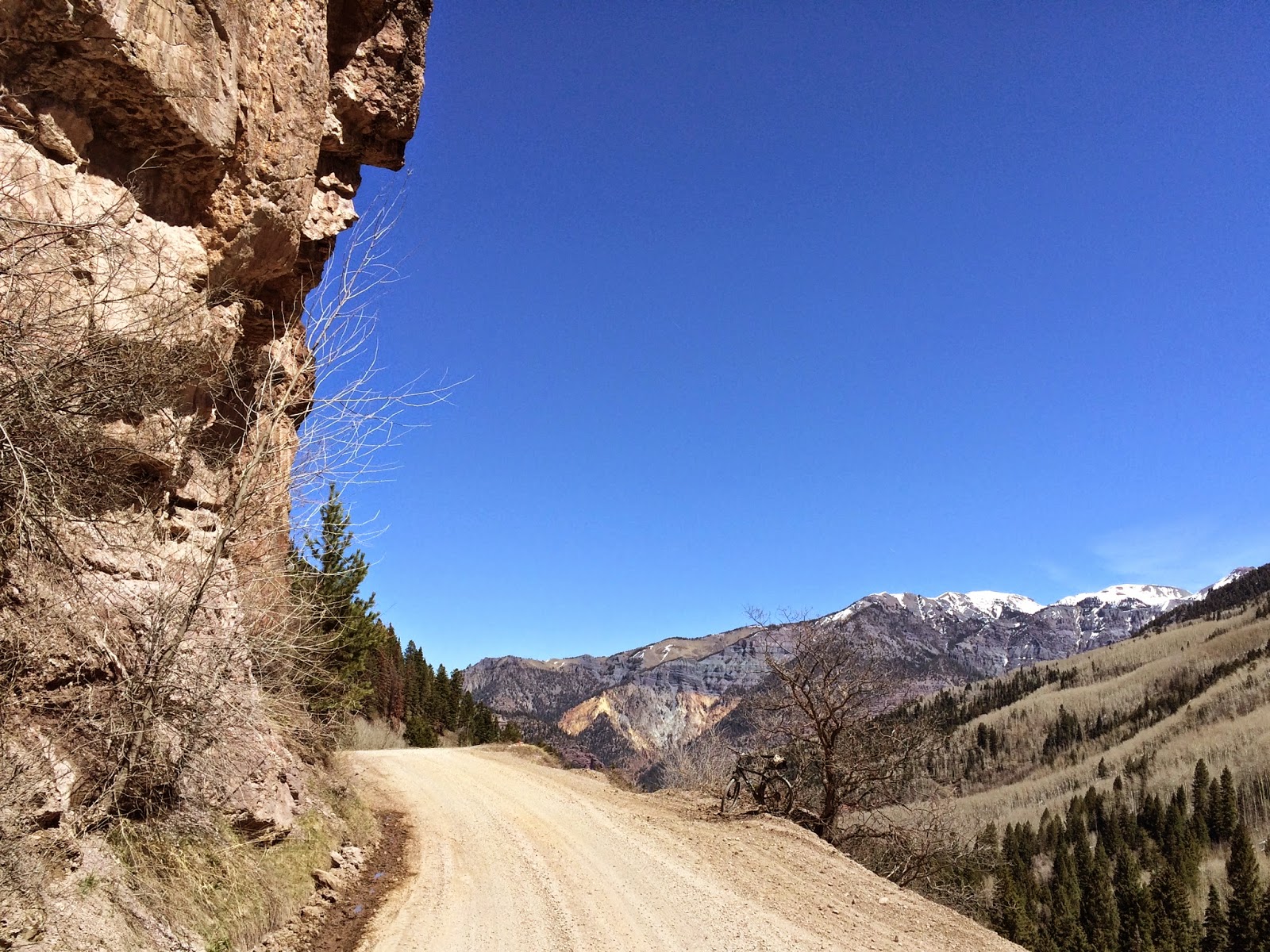 Still snowed in up at Camp Bird Mine, and a tad chilly when sweaty from grinding out the uphill bitch of a road.

An abrupt flashback to Camp Madera, now, the day before our departure:

Our naturalist/birding authority friend, Sandy, hosted a party at her quaint adobe home in Green Valley. It was her birthday, excuse enough. Sandy was Bobbie's VISTA partner on the Navajo Indian Reservation in Coyote Canyon, New Mexico, an out-in-the-middle-of-nowhere place for two young gals to end up fresh out of college.

Must have been 12 or 14 great people at the party… enough that we needed name tags :) Wandrin Lloyd showed up in his traditional jazzy Hawaiian shirt. Now off the road after 13 plus years of roaming, it was nice to reconnect with Lloyd. He's settled in Tucson, but tries to get to cooler climates during the heat of summer. Considering Lloyd's been through the ringer with Chemo and Radiation for the big C, he looked no worse for the wear on the outside. I'm sure it was a different story on the inside. Stand up to the "mountain." On to a complete remission/cure, Wandrin Man. Prove there is Life beyond Geezerhood. I hope you swing by Lovely Ouray this summer… the spare bedroom is always open. 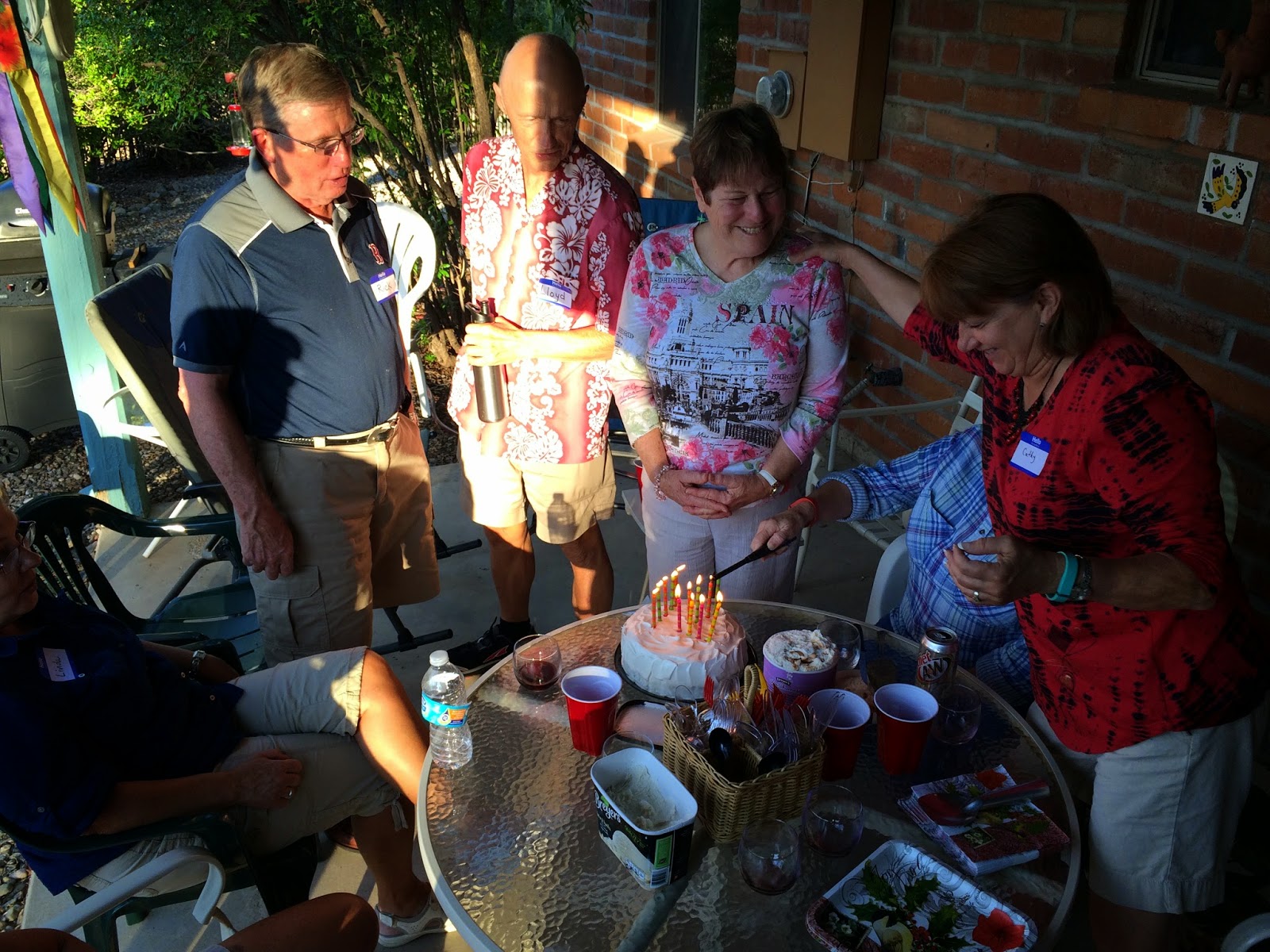 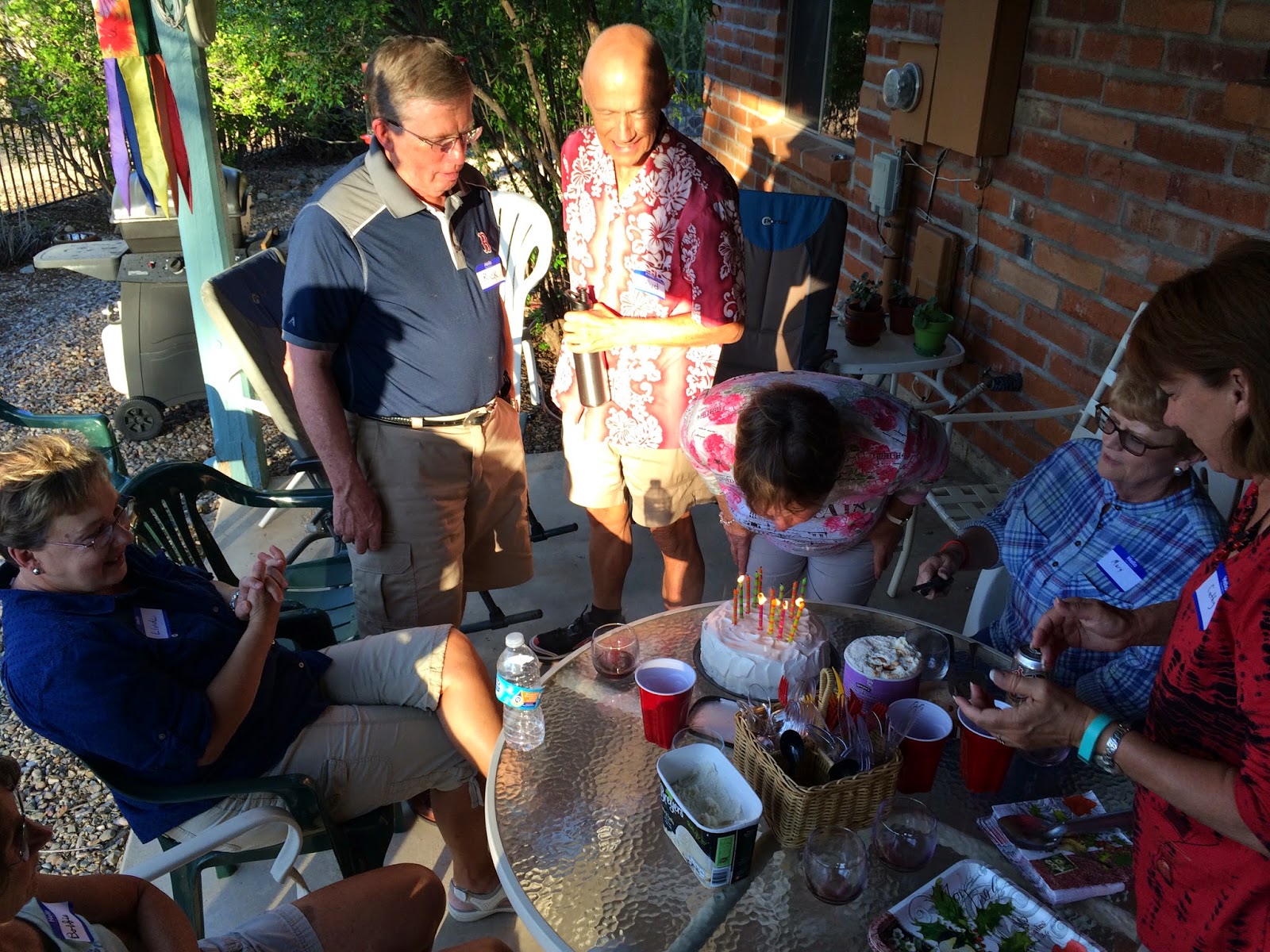 Posted by Box Canyon Blog.com at 8:57 AM