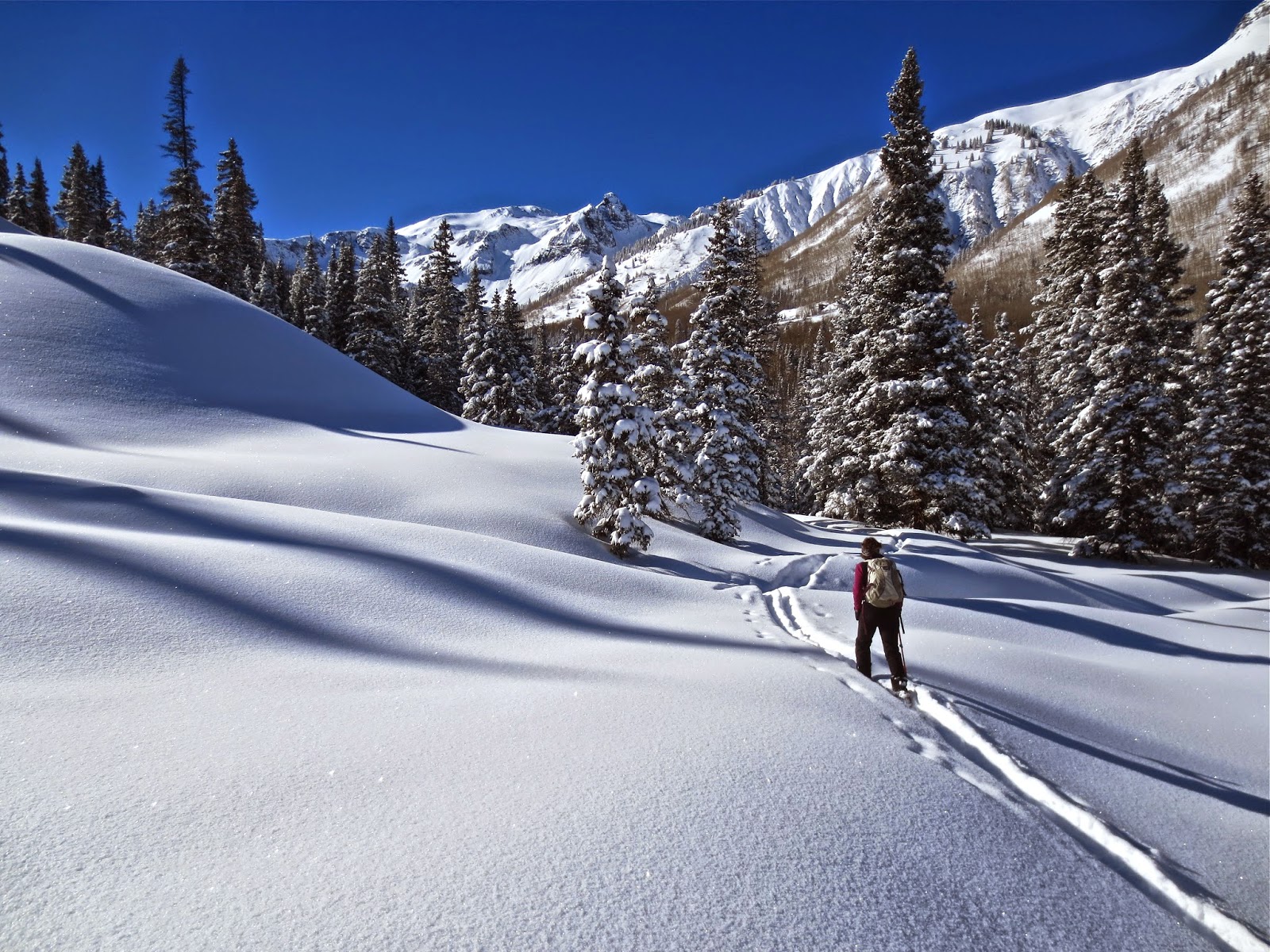 It's been far too sunny and mild and dry since returning home to "La Crevice;" I've been cavorting around in shorts and long sleeve tee shirts, waiting for Old Man Winter to get off his tepid ass.

Saturday afternoon, remnants of that Pineapple Express, the one that's been rearranging subdivisions and roads on the Left coast, finally meowed it's way into the San Juan Mountains. Its punch pulled by the Sierra's, no doubt. Oh well, California's going to get that water eventually, no matter where it falls. Be nice if we could use it to ski on for a couple of months in the interim, tho.

So yeah, the storm didn't exactly roar into Colorado, but it was enough to put a sorely needed layer of white "paint" on Lovely Ouray's dirty streets and settle dust.

A peek out Imax Windows monday morning revealed a winter wonderland suitable for Christmas morning. The storm dropped a total of about 8 inches of light fluff here, then rushed eastward, where it messed with huddled masses and interstate mother truckers who's lot it is to occupy and traverse what I kindly like to refer to as, "the  pancake states," a rolling sea of gale-swept, over-tilled real estate with only cows, cornstalks and silos to break the torment of eternal wind.

Tired of routine and predictable walks and hikes around town, we dug out our snowshoes and gators monday morning—braved Red Mountain's "black ice" and avalanche shoots—in order to lay fresh tracks through Ironton, a historic 19th century ghost town straight out of the heydays of hard rock mining. It was one of those dead calm solar days. Sue Bee's outside thermometer read 8 degrees as I plunged her nose into a snowbank; Damn, I could have worn shorts up here!

Floridians and other Southern Sun Belt inbreds will not believe Coloradans when we say things like, "But it's a dry cold." It's true, take moisture, clouds, and wind out of a weather equation and cold temperature is as irrelevant as Obama…or any other President for that matter. It sure didn't take long to overheat and break a good sweat with all that sunlight bouncing around.


At ten thousand feet, Ironton is both metaphorically and literally breathtaking, a good place to shed lazy lungs that come as a result of spending a couple of months in Utah's colorfully canyoned lowlands. Bobbie and I are always surprised and disappointed at how fast we lose elevational acclimatization, but pleased that, so far, it is a temporary condition that is treatable with a couple weeks dosage of uphills. 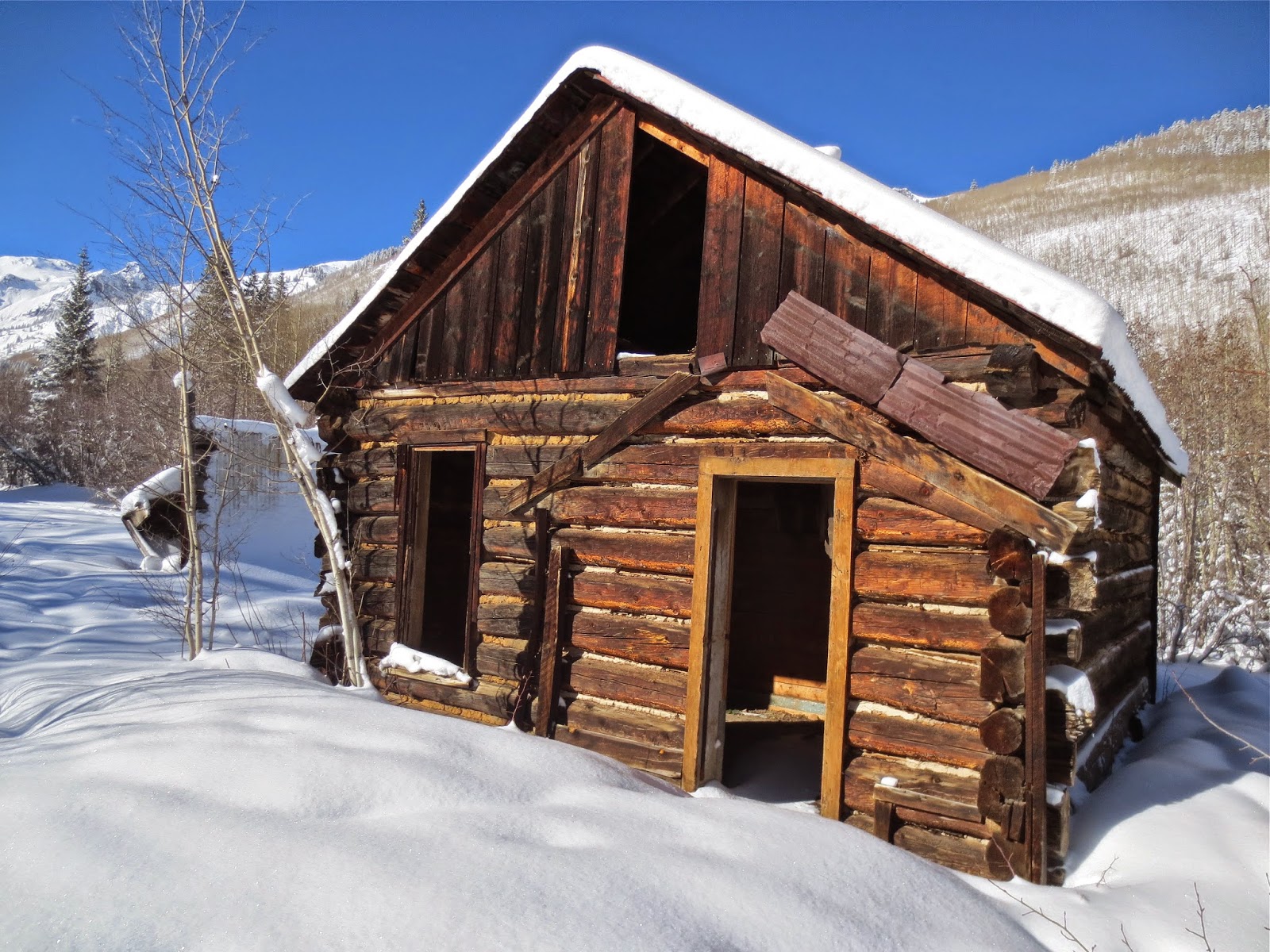 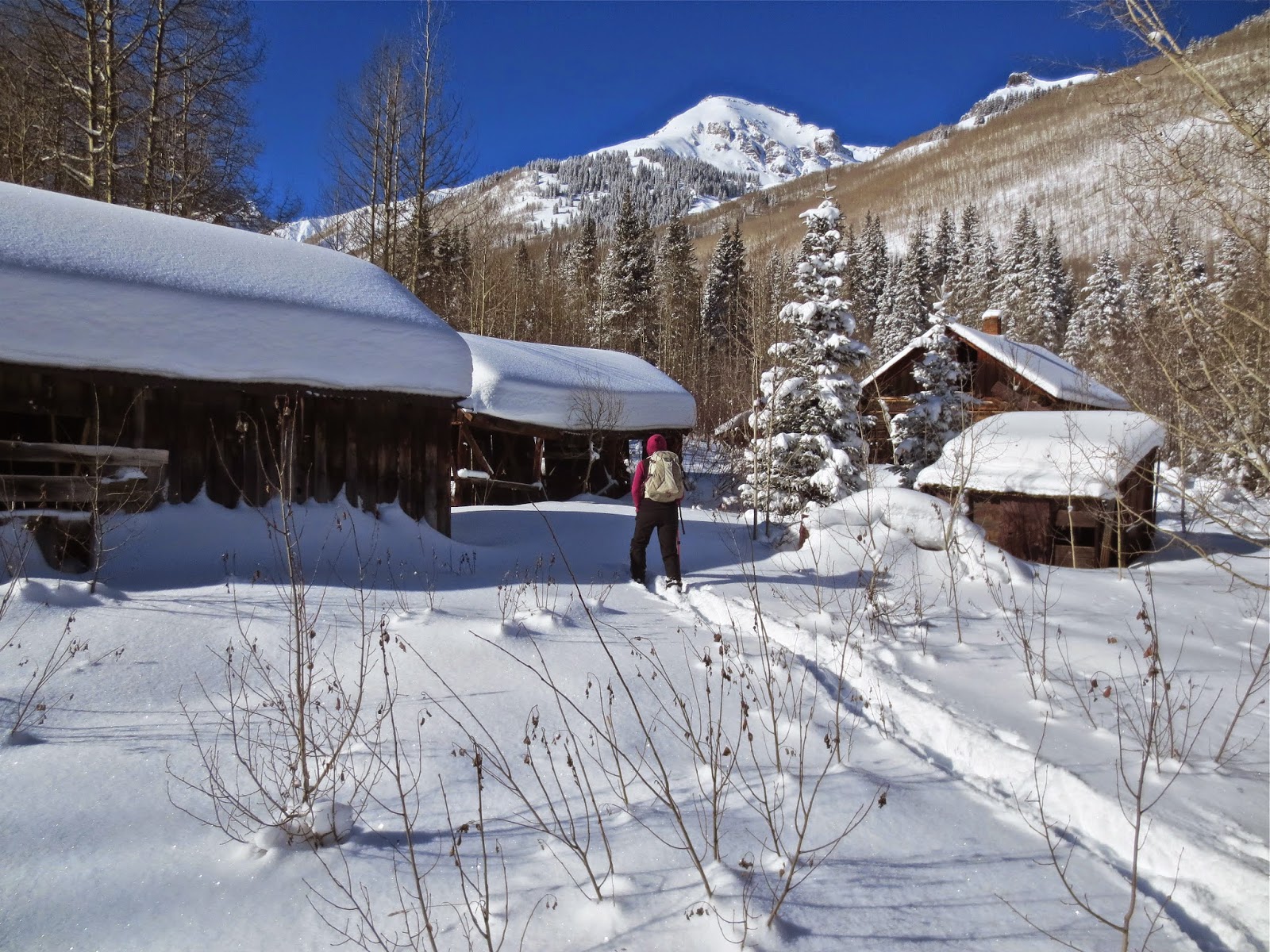 Though snow pack in Ironton was only about 50% of normal, there was plenty enough for our purposes. A good firm sub-surface under new snow allowed us to swish through Ironton at a pretty good clip. 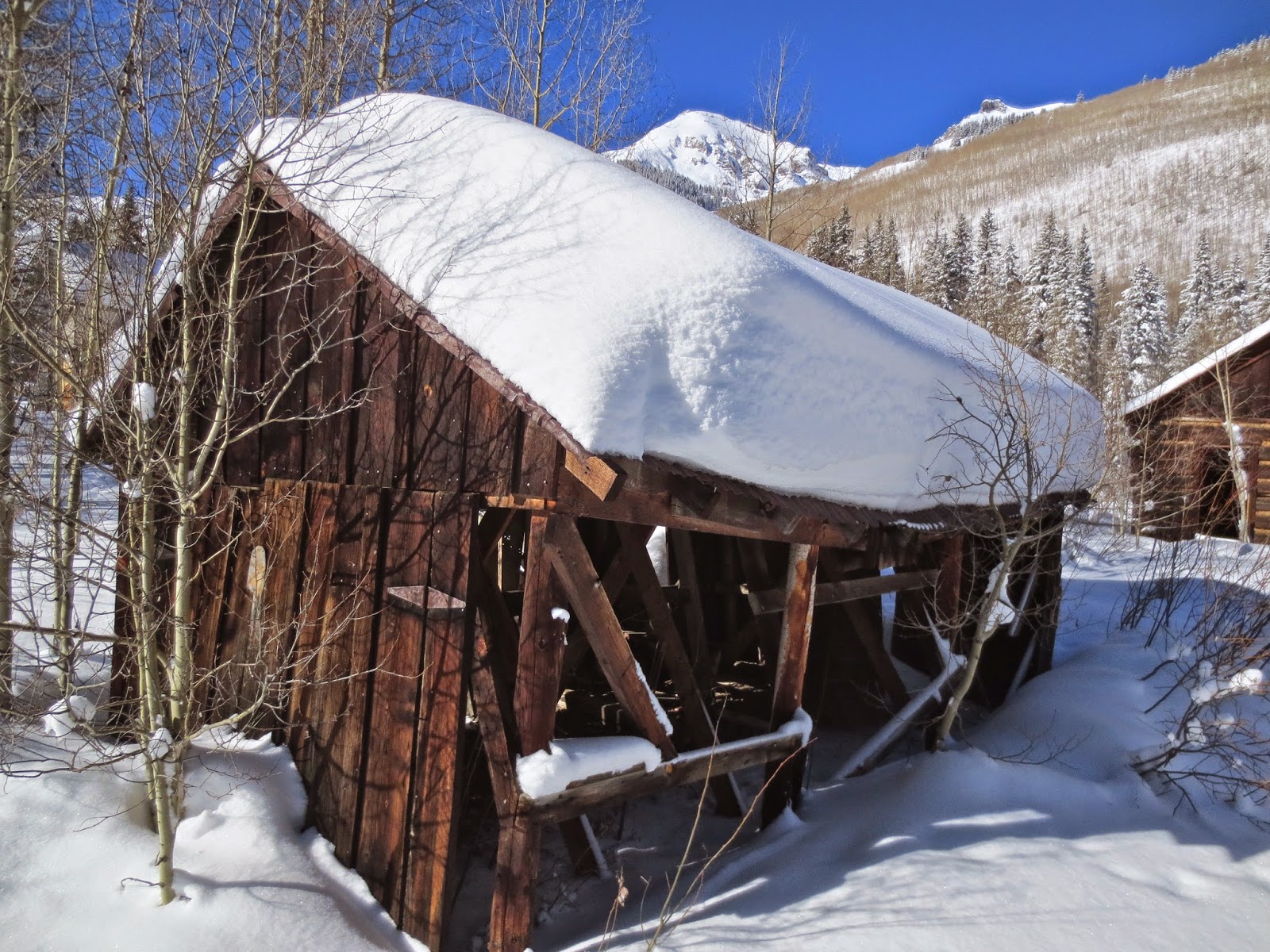 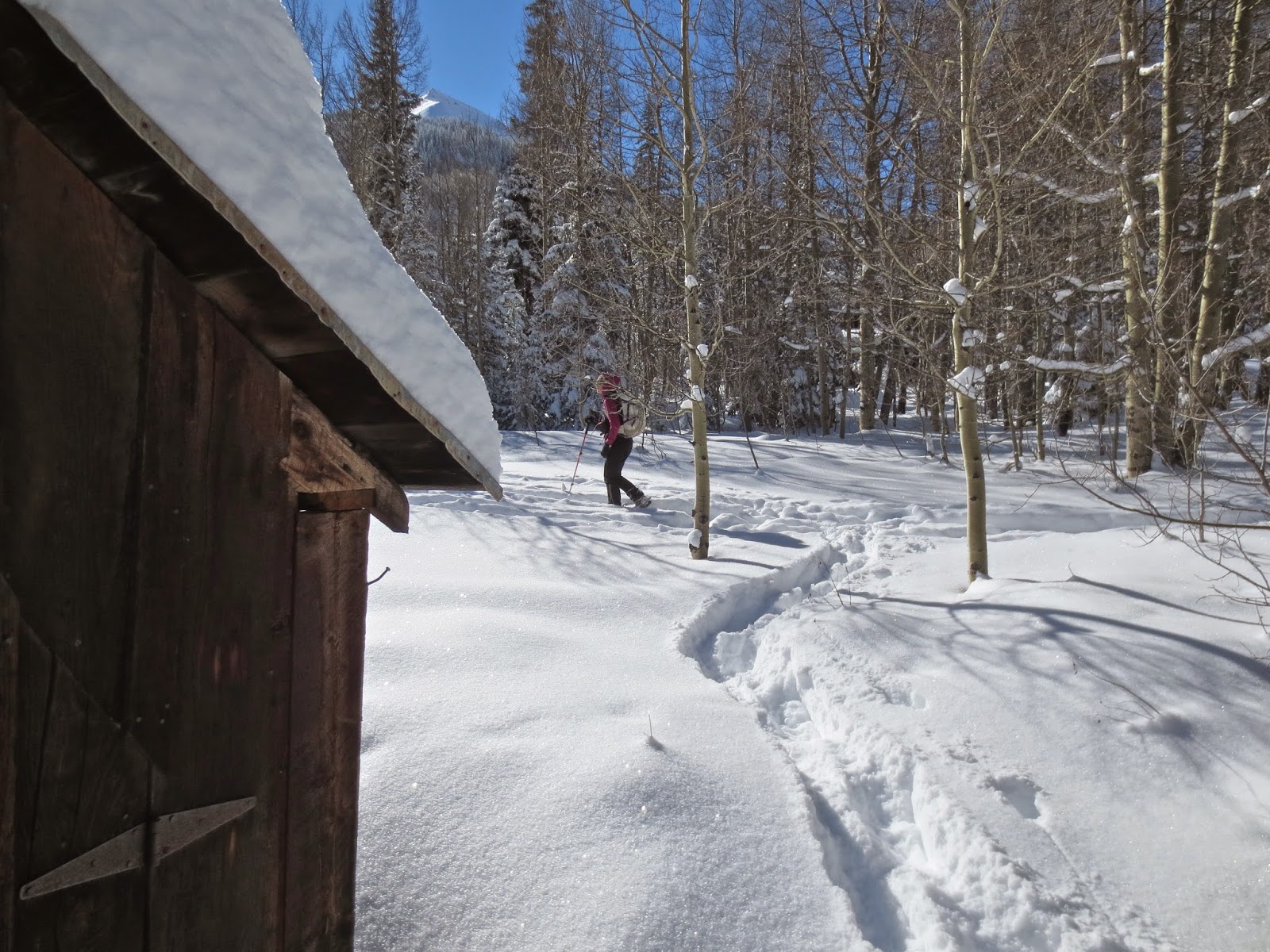 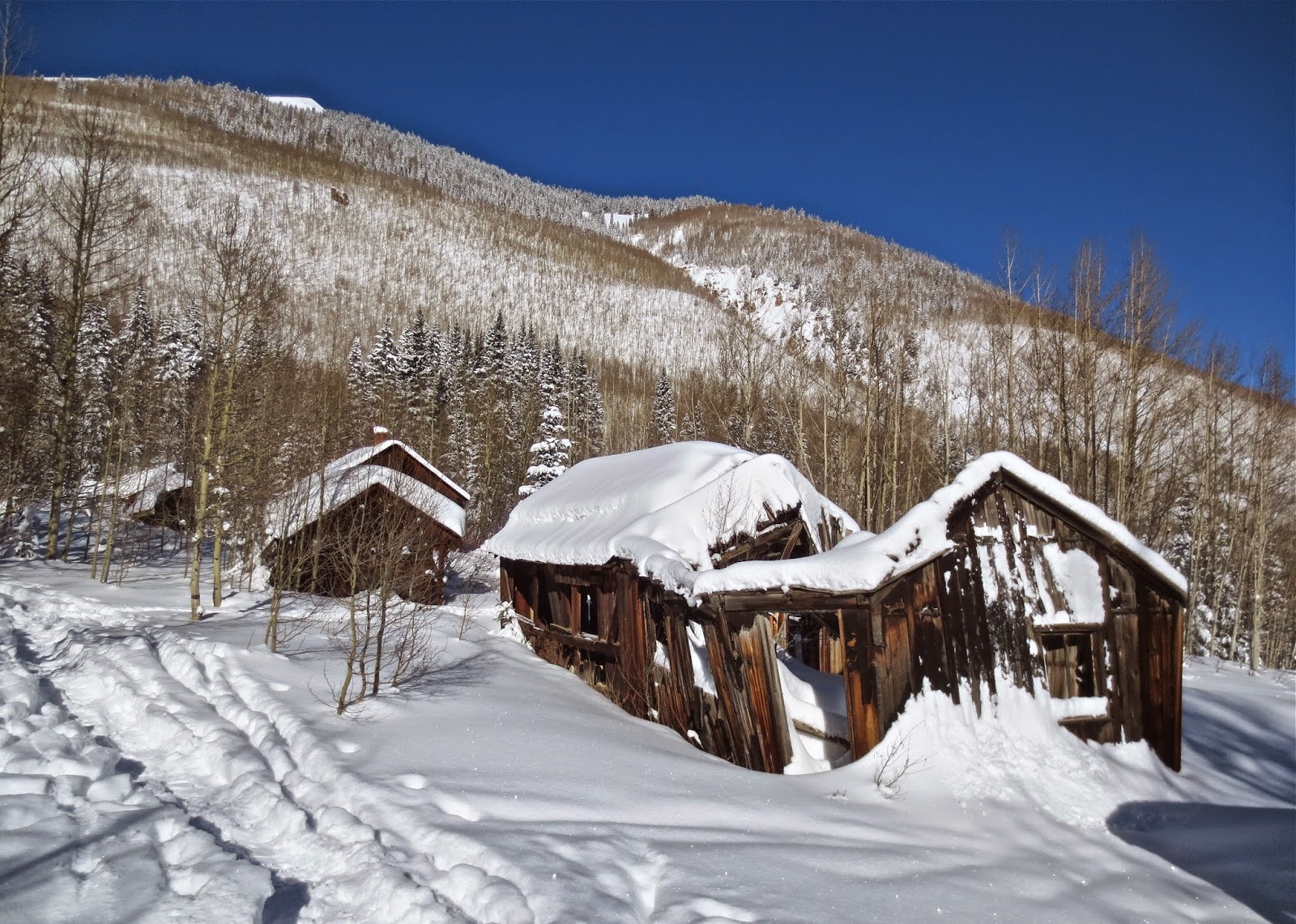 Whoops, I see it's 9 am, and I have a physical at the Doc's office in Ridgway in 30 minutes. You can peruse the remaining photos while I go get this shit over with. Be right back... 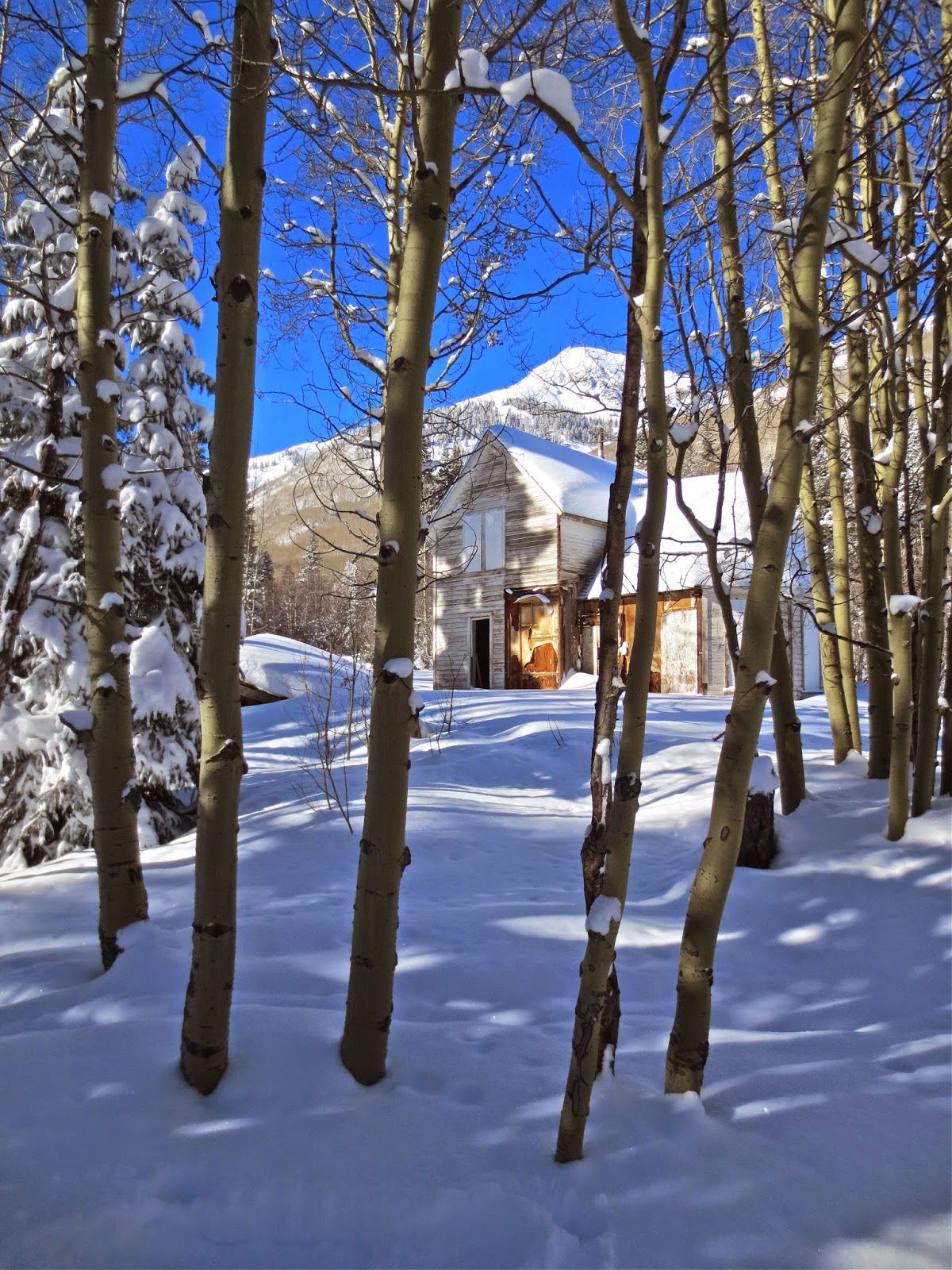 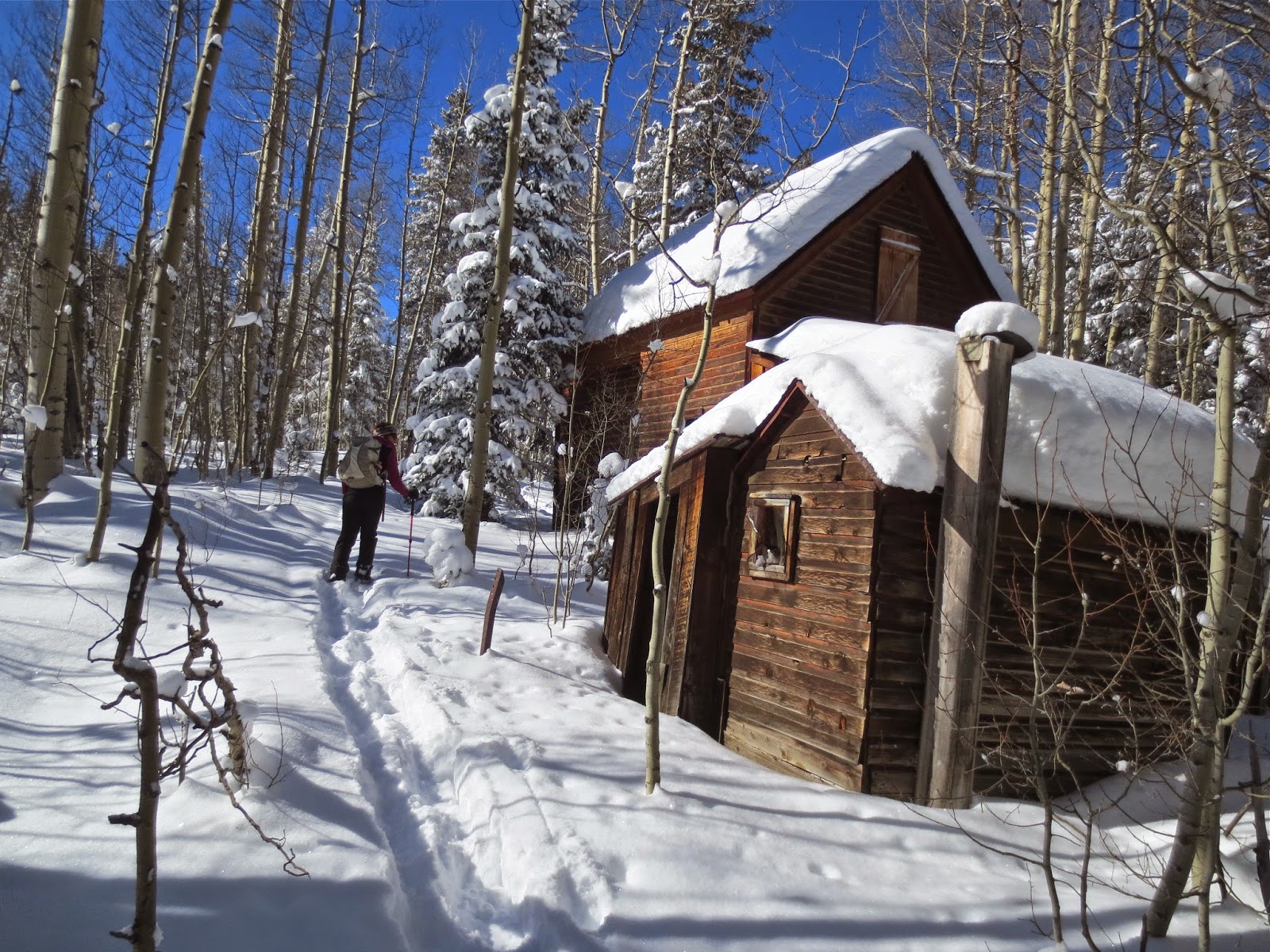 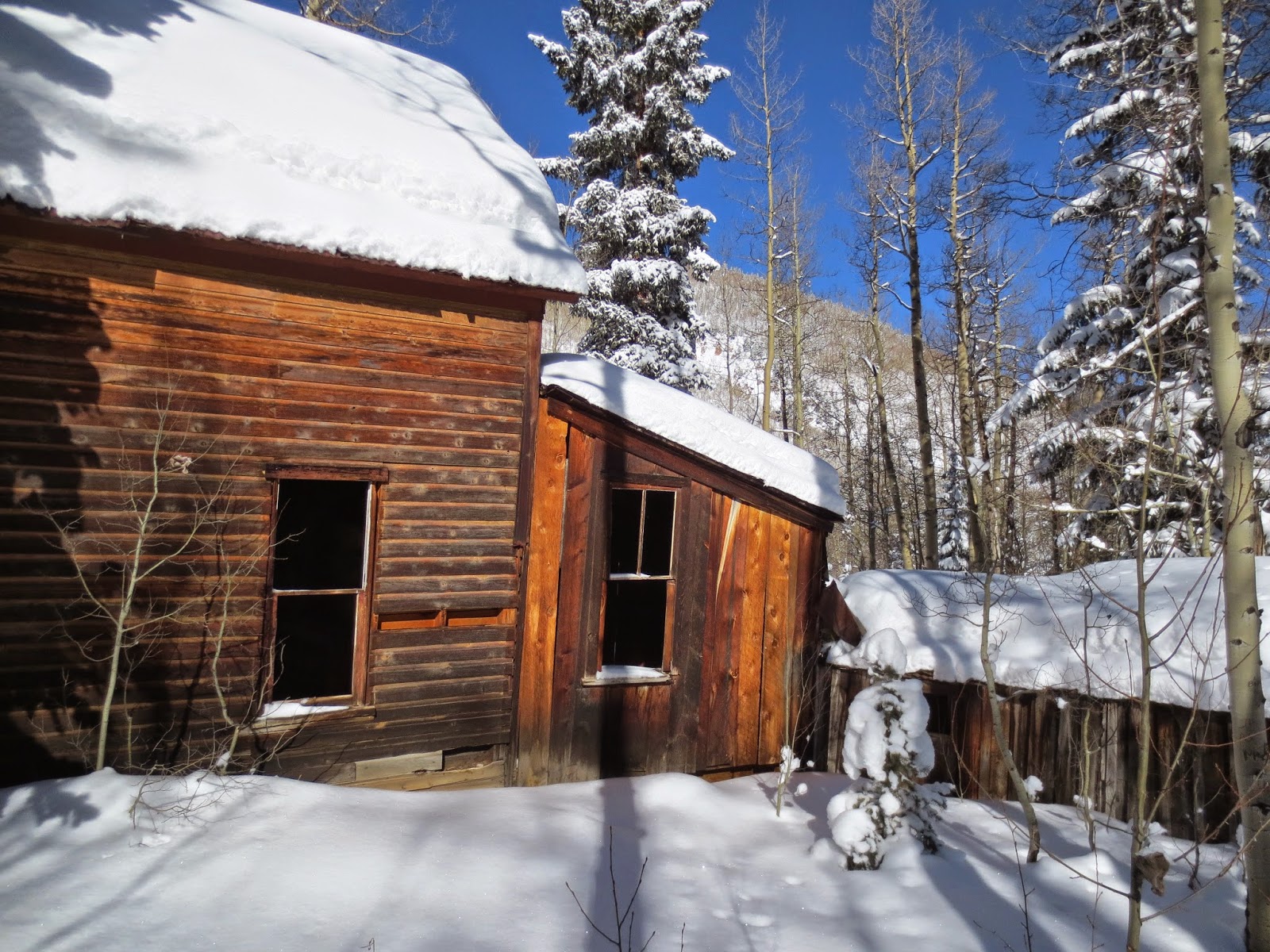 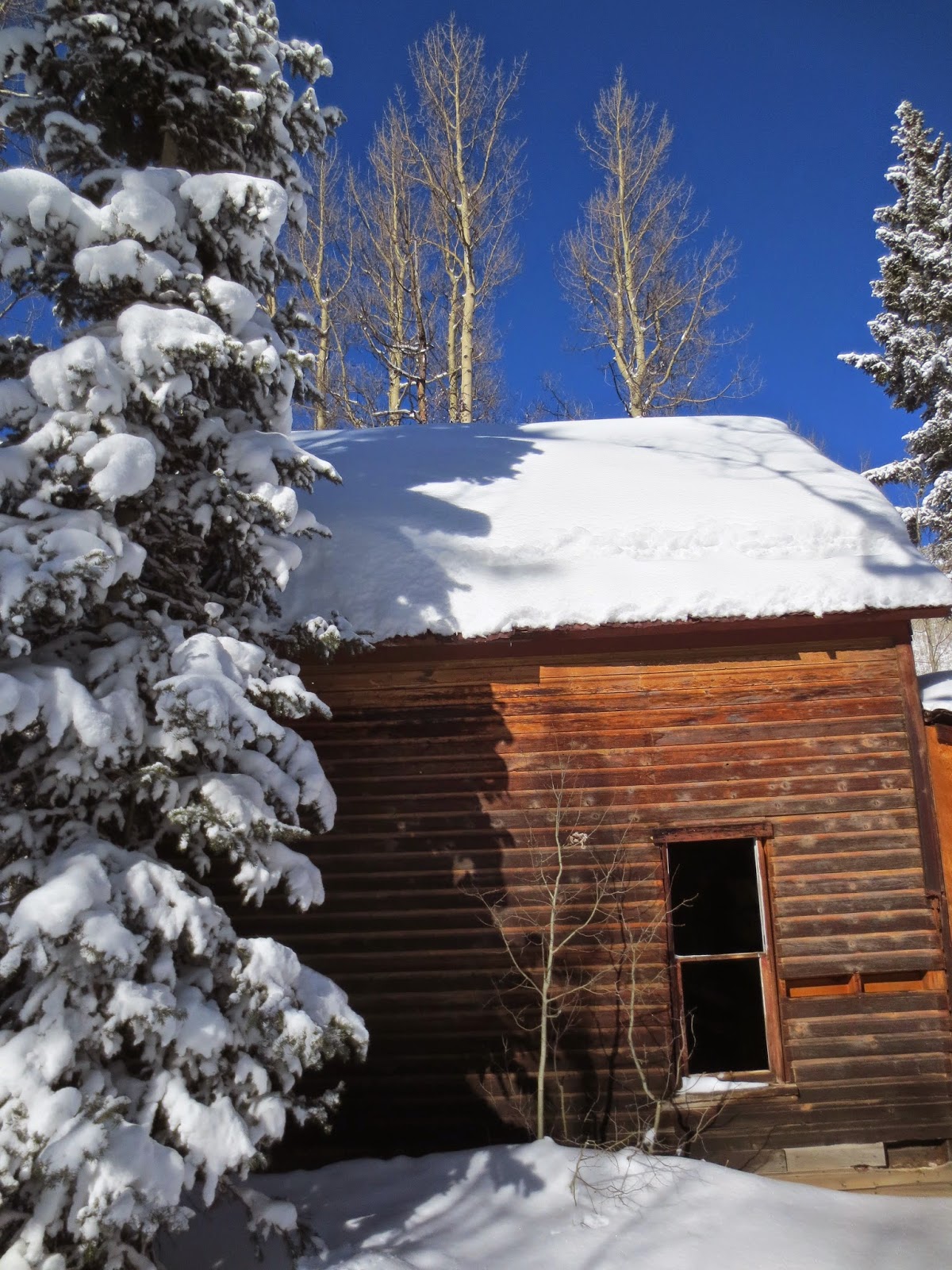 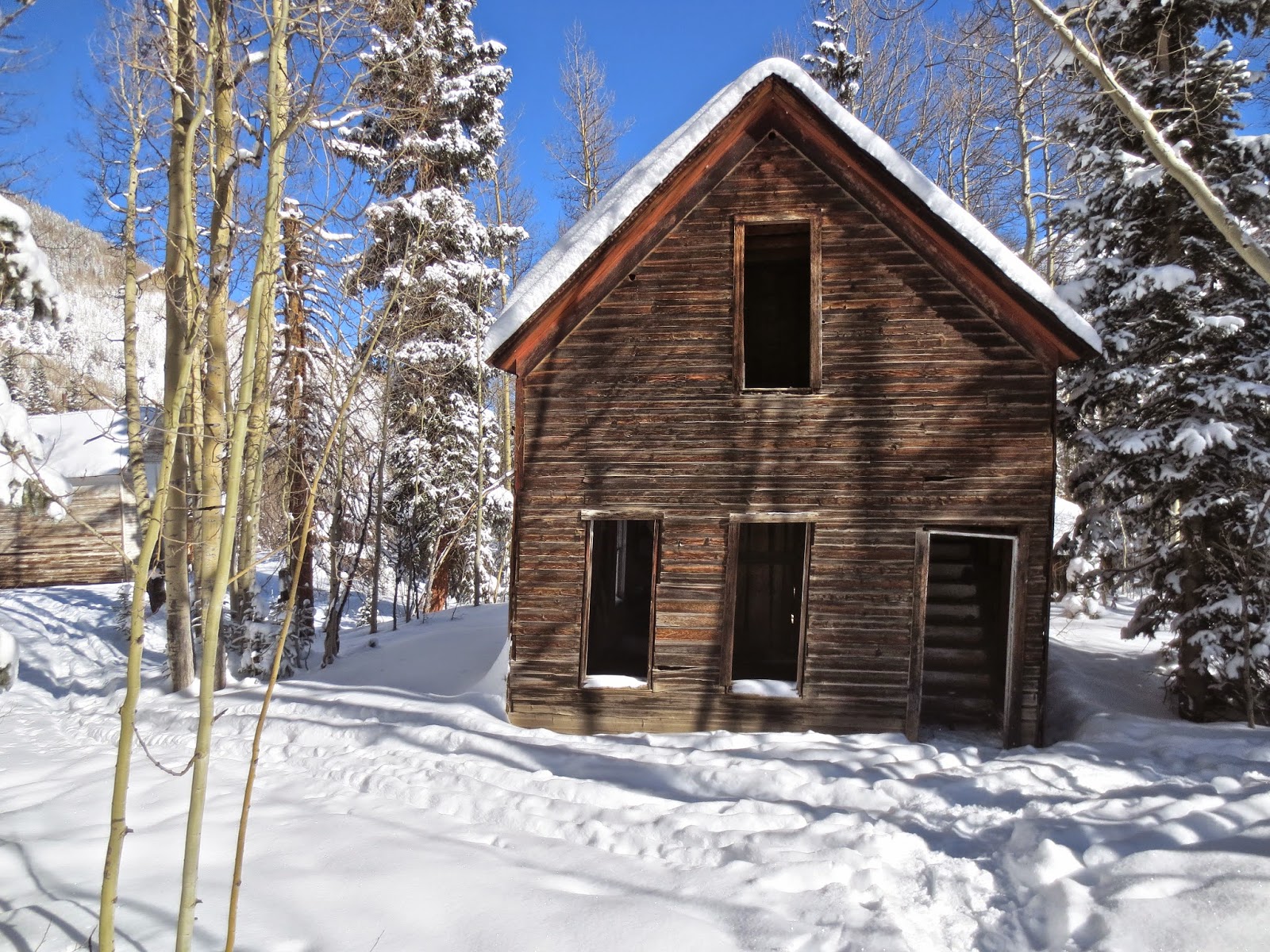 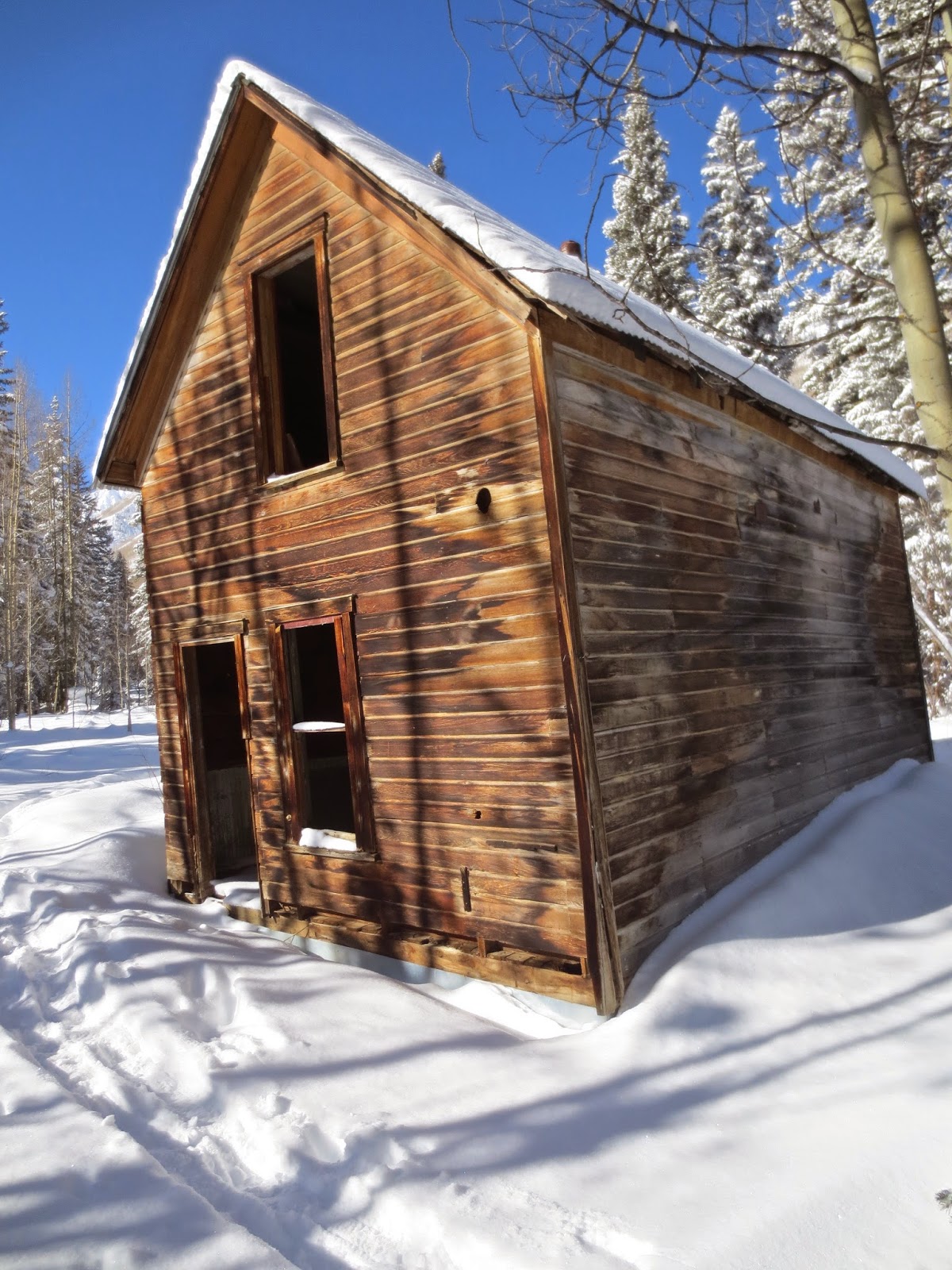 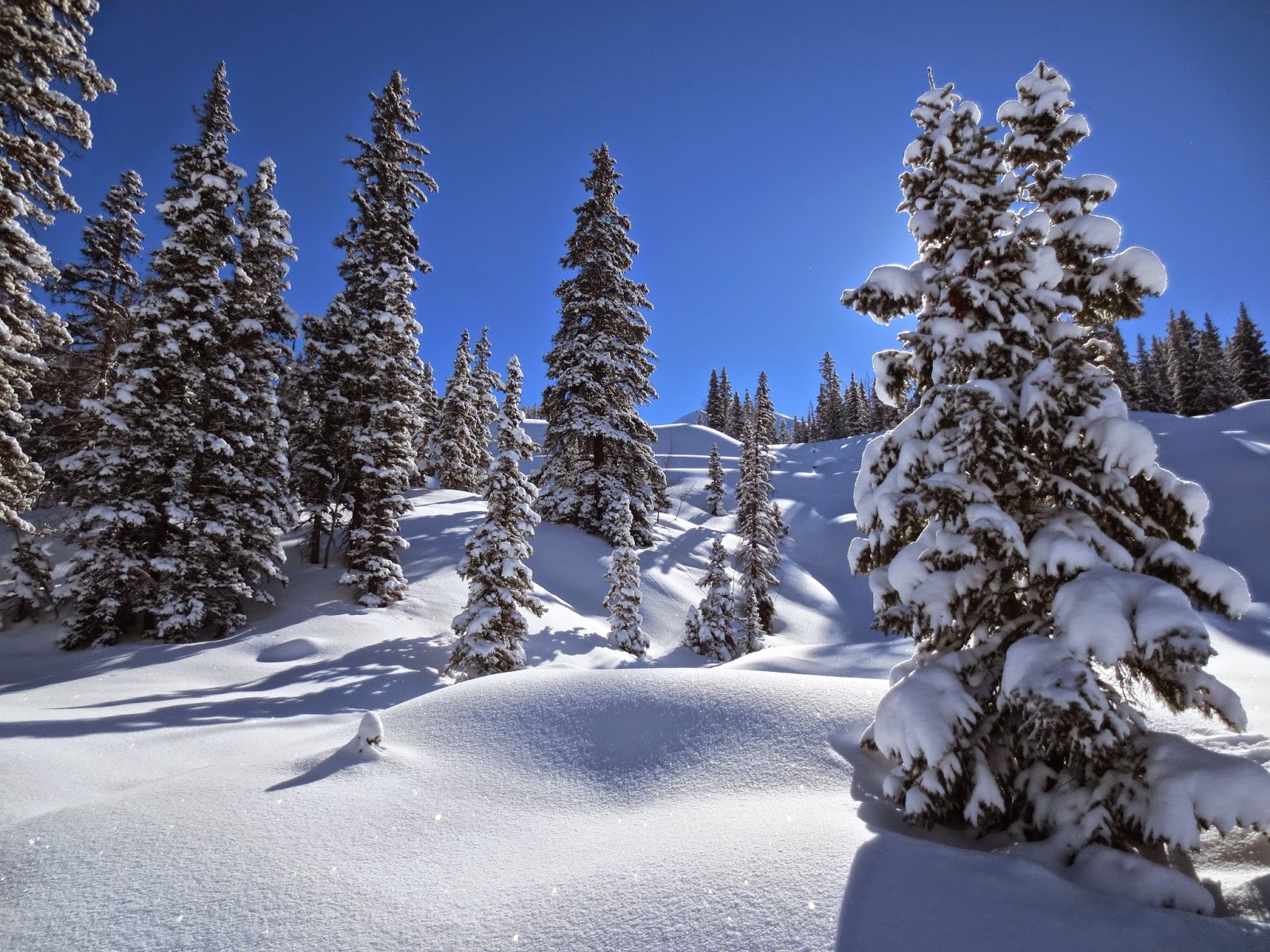 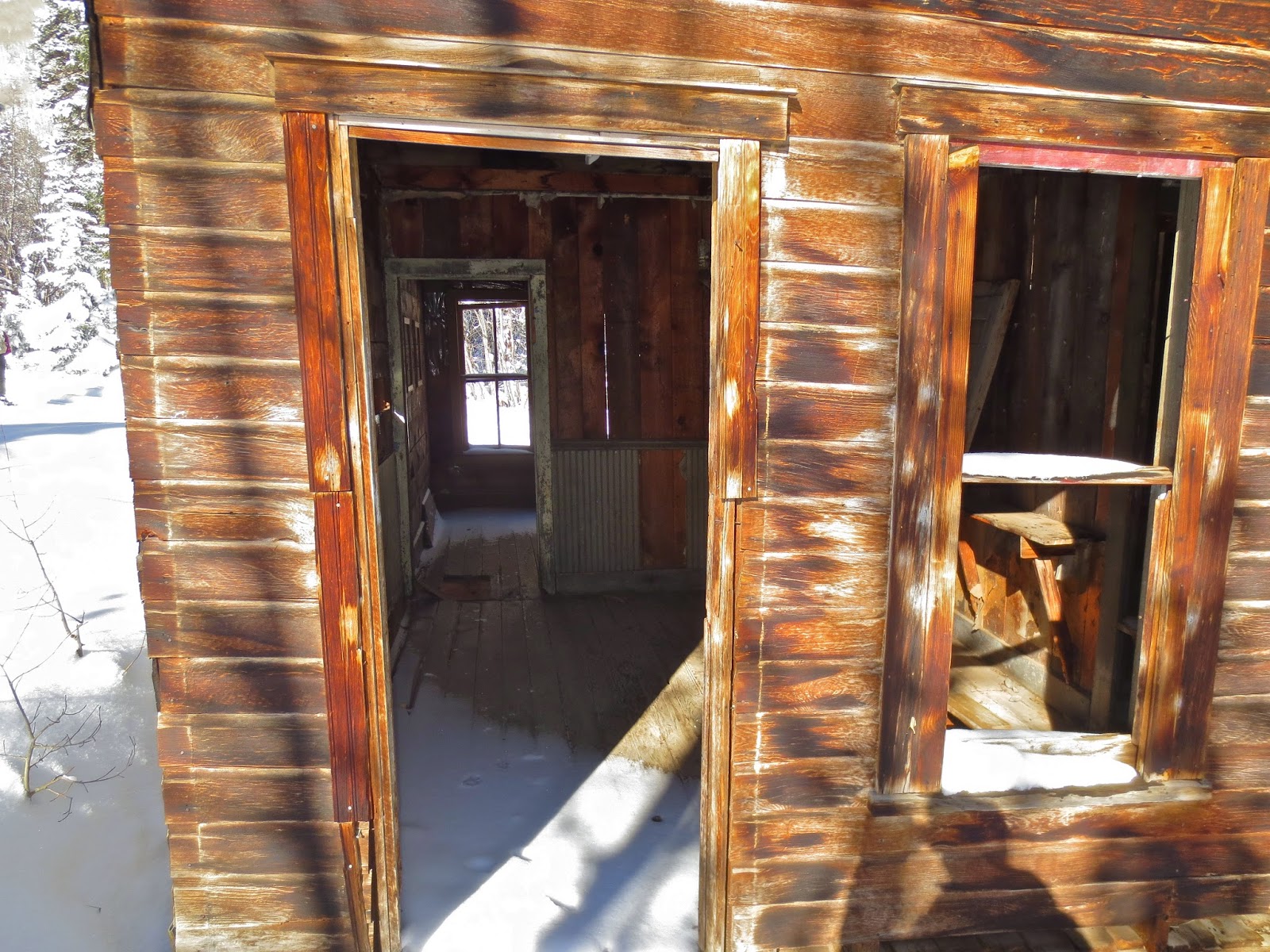 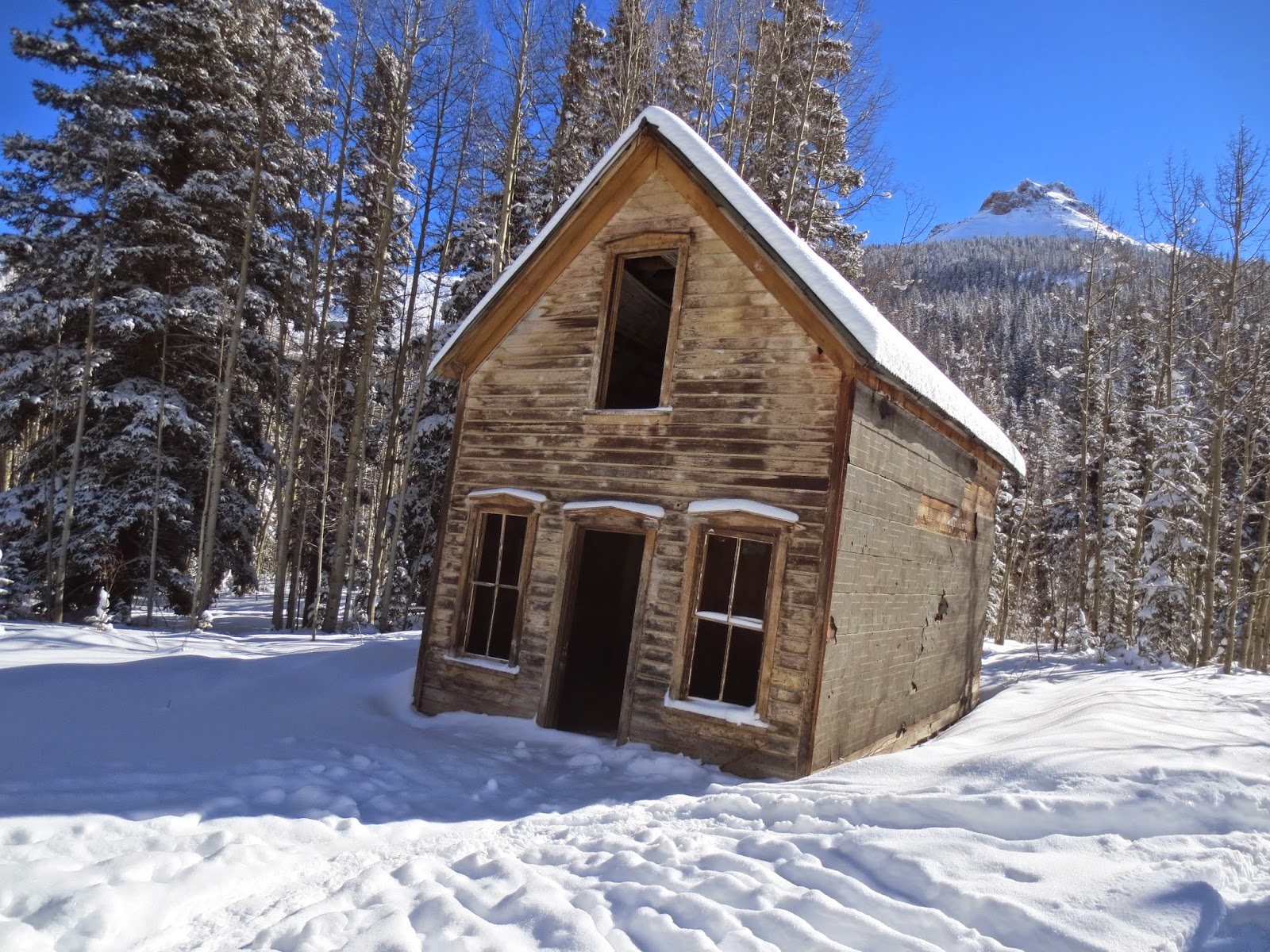 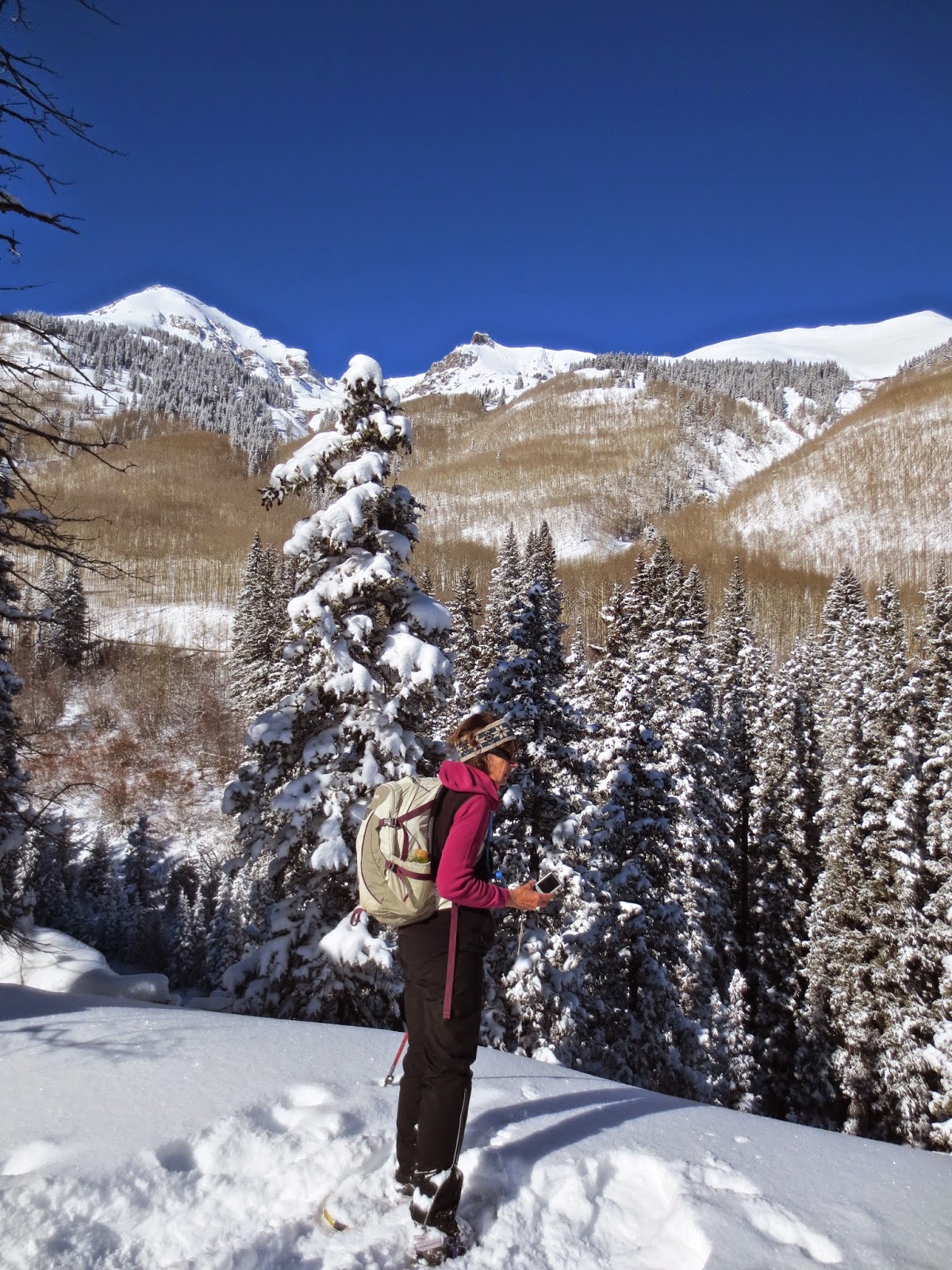 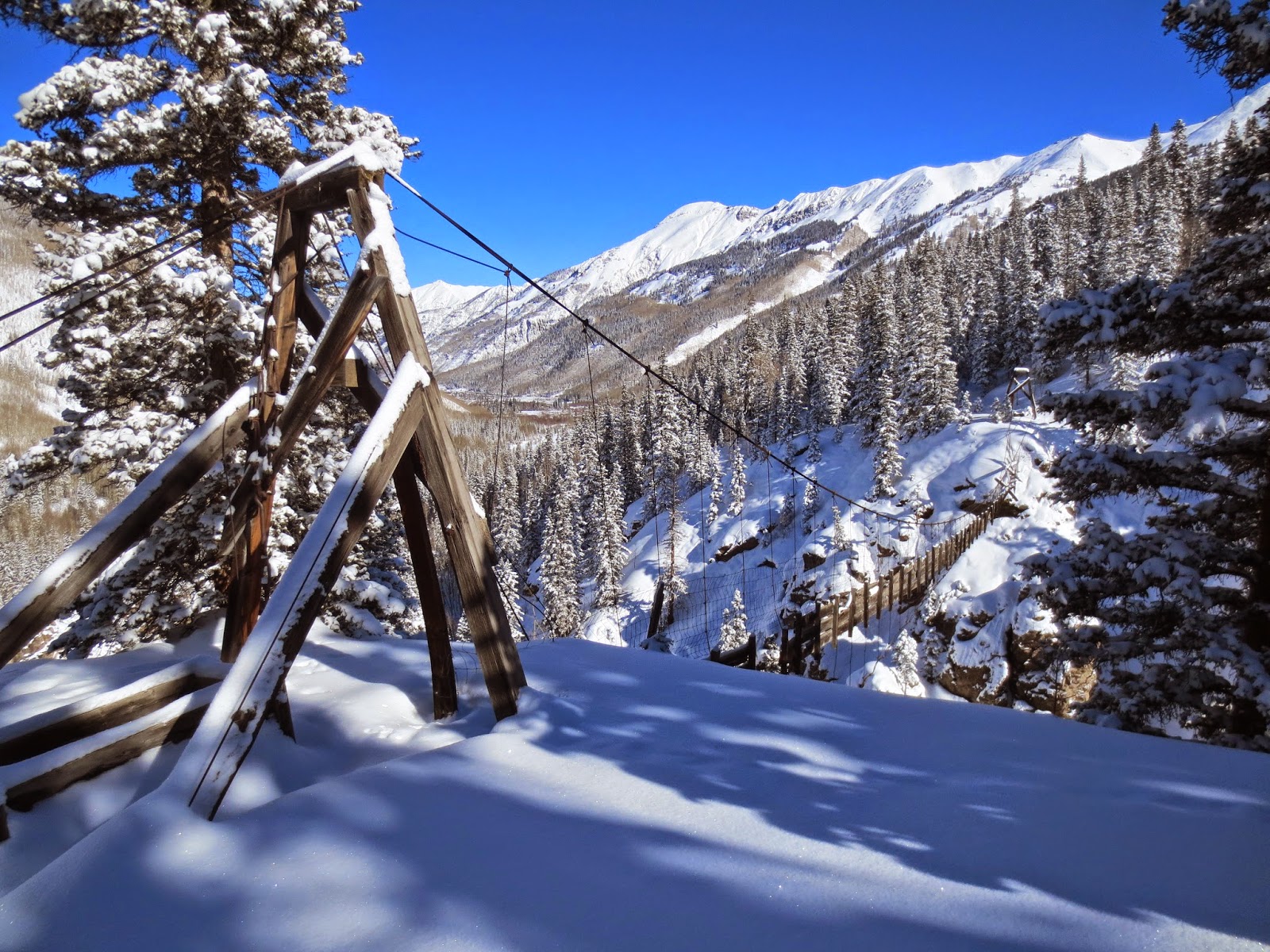 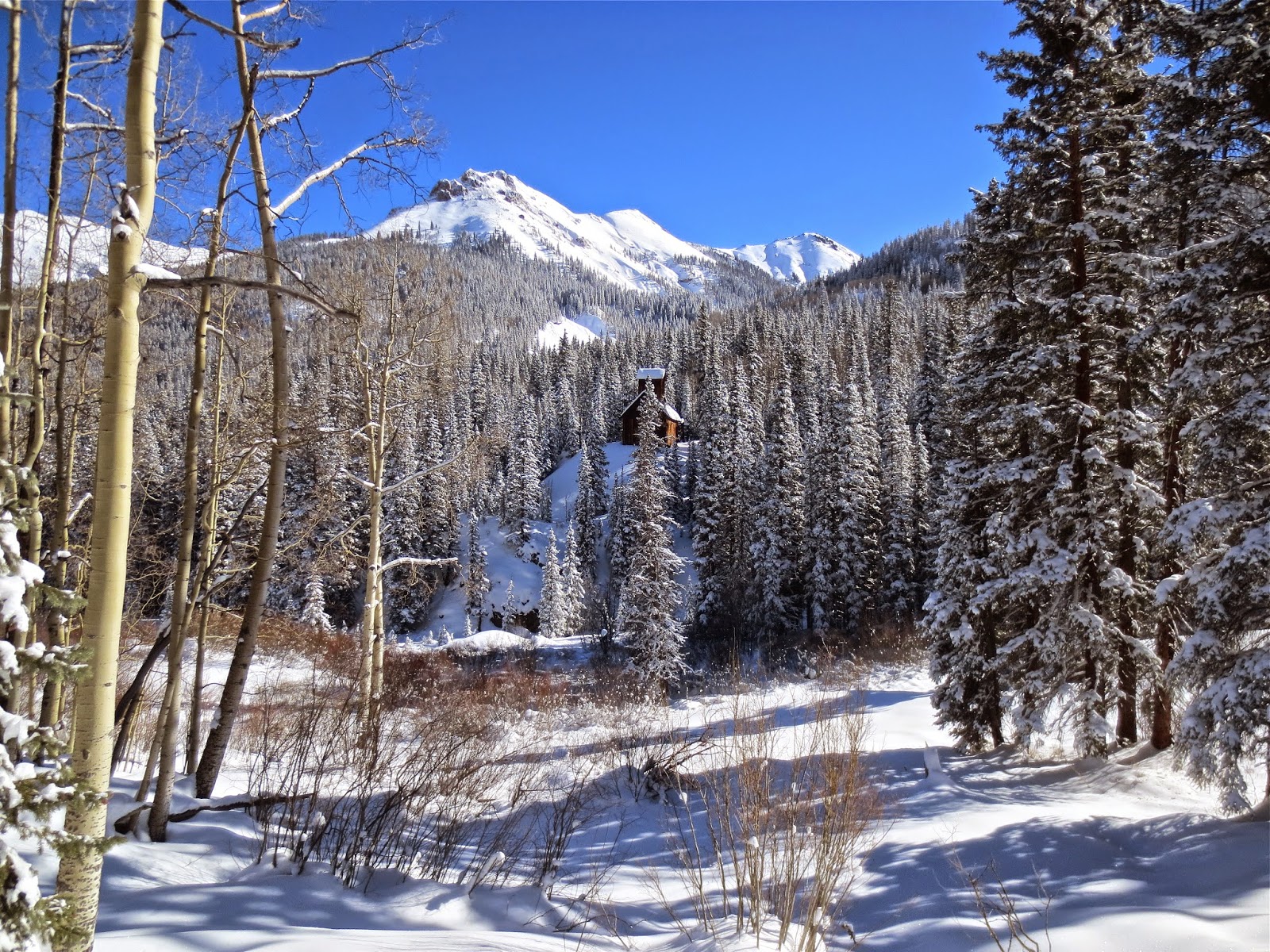 Okay, just returned from the Doc's office and my first real physical in over a decade. There is good news and there is bad news. The good news is, I've got a very suspect mole on the back of my neck and it is likely not benign. The bad news is, my new Doc is a tall, slender, southern belle that looks to be all of 18, and she is the one that's going to give me a physical.

God Almighty, you sure have a sick sense of timing... to finally grant my high school fantasy now, when I'm a mid 60's, scar tissued Geezer with hemorrhoids. It get's worse; she wants (and I use the word "wants" with reckless-bordering-on-illicit liberty) to check my prostate. This must be "Pay Back" for all my teenage sins, and it's far worse than blindness, which, at the time, I seemed perfectly willing to risk. 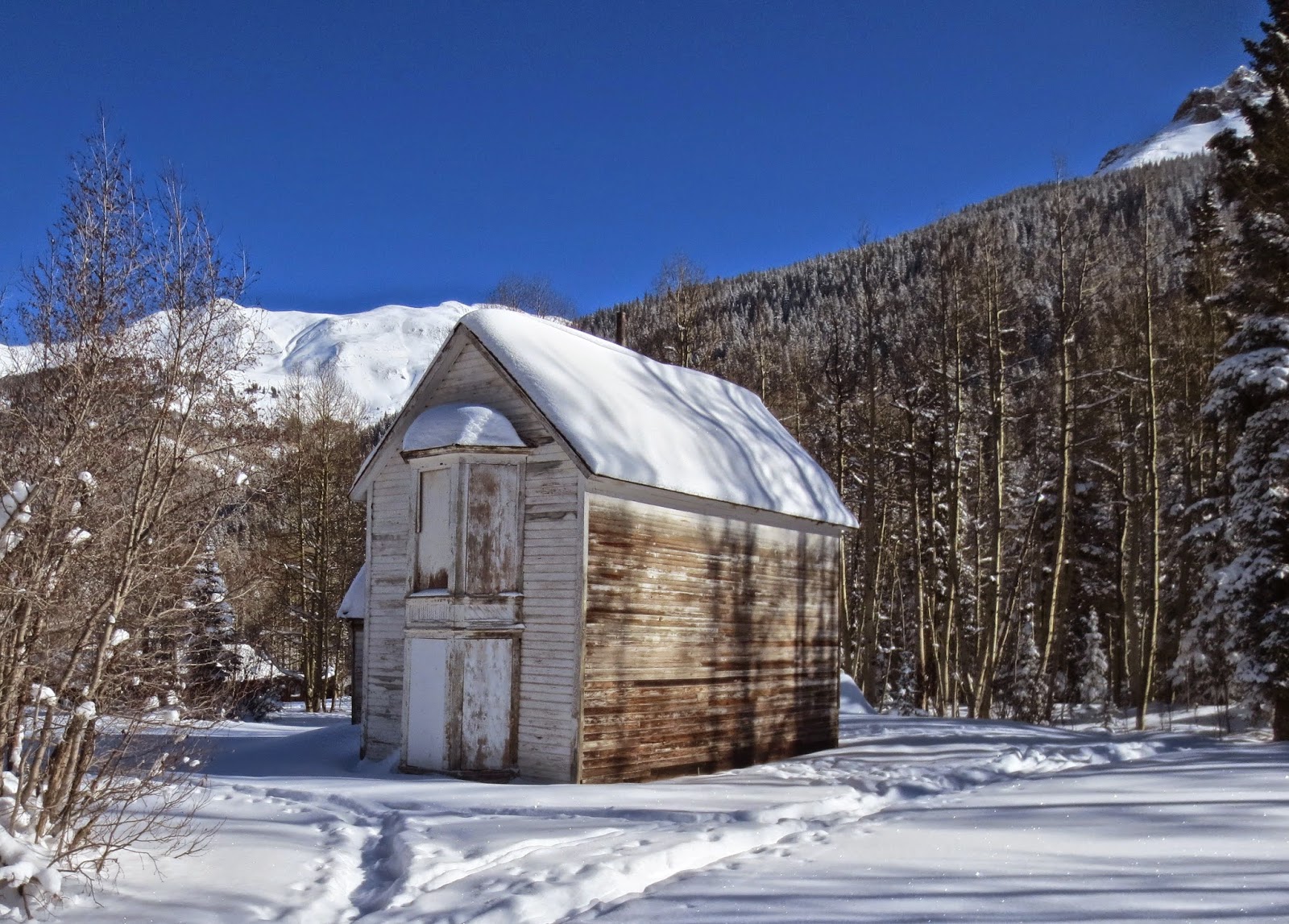 "Doc," I says, "Can't we wait? What if it turns out that the biopsy reveals I have skin cancer? Who cares about a healthy prostate then? Why should either one of us undergo such a radical, invasive, personally affronting procedure when there is a good chance I'll die from something else first?" 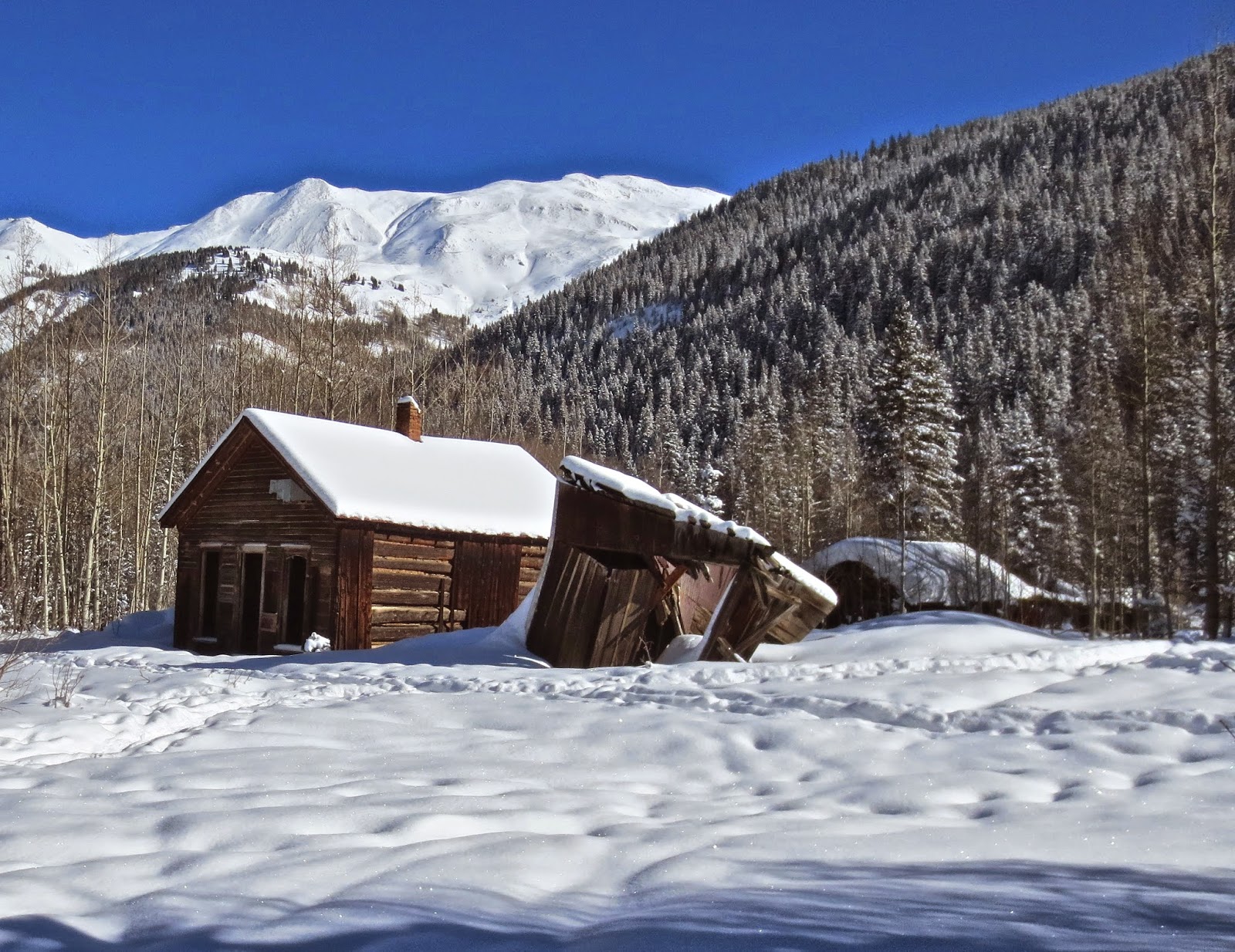 "No," she says, slipping her long slender fingers into a Medical Blue latex glove. "It's just a gland like any other gland. It's nothing. Now if you will kindly bend over, rest your arms on the exam table, and I'll get this over with."
I complied, but only after expressing that it was under "great duress and protest." 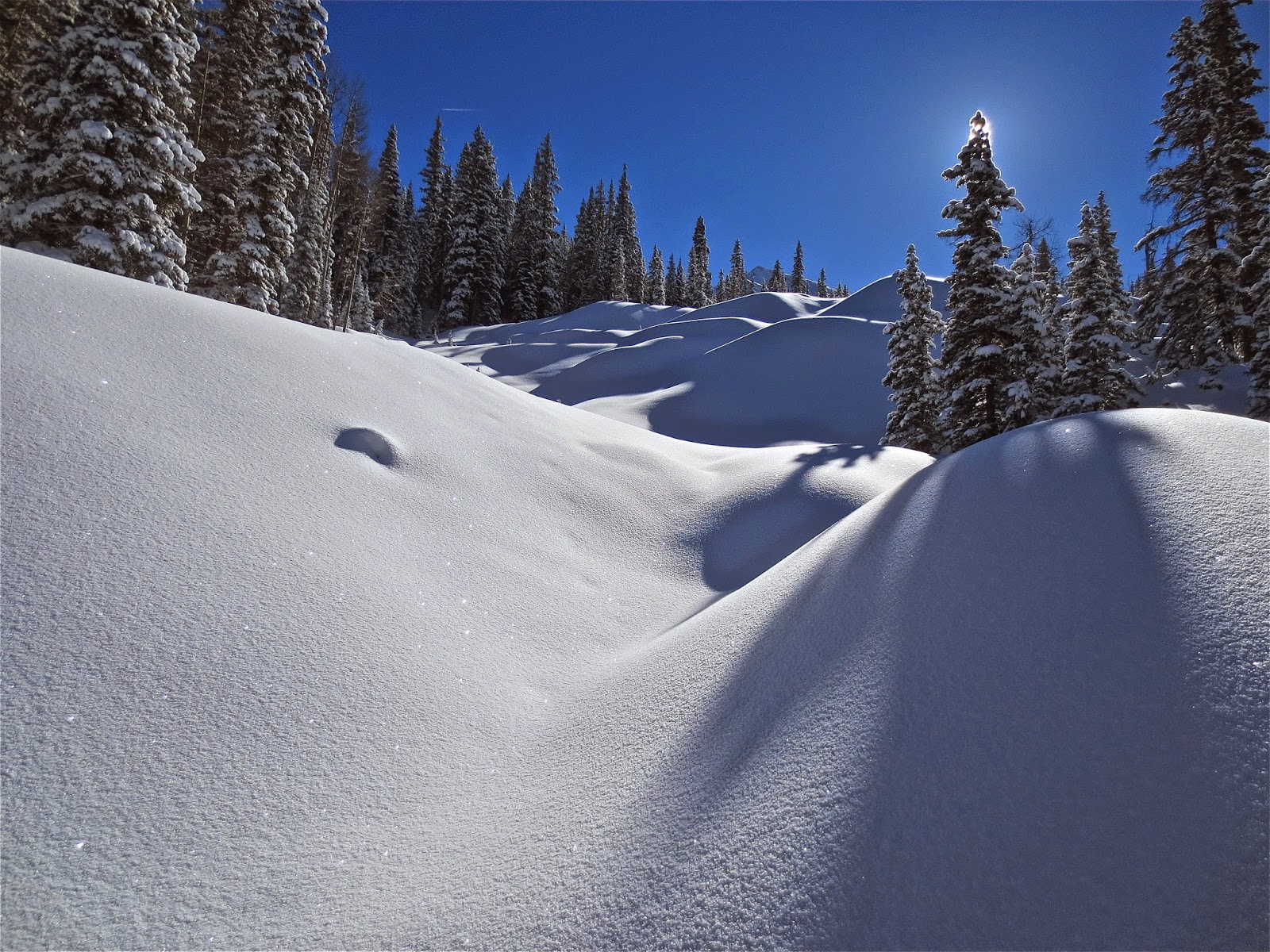 I hear the squirge of lubricating gel; not unlike the sound ketchup makes as it's squeezed from one of those plastic bottles found at roadside dinners.
Doc: "It could be worse, you know."
Me: "Not possible, but how?"
Doc: "You could be on my end."
My mind immediately did what any other red blooded American Male's mind would do, it switched our places…and I was giving her a prostate exam.
Me: "Somehow that doesn't seem as bad."