We headed home to a stretch of balmy weather on the last leg of our trip. I reined Goldie in some so it took a little over three hours to get from Moab to Lovely Ouray. The route is narrow, shoulder-less, and potholed—a backroad that twists and turns with rugged terrain the way all highways did before Interstates builders started "snapping lines" and bypassing Moms and Pops out of business.

We love the backroad route home from Moab for its middle-of-nowhere desertion, destitution, and decay. Except for modes of travel, I don't think it's changed much in the last century. At Lasalle Junction the road scooted us around the south end of the La Salle Mountain range—an alpine sky island amid red canyon labyrinths brimming with Anasazi antiquities. A long oak-brushed valley elevated us through picturesque single file ranchettes— hayfields and cattle that suckle at the fickle tit of La Salle Creek.

Then up and over a moderate pass and into Paradox Valley, Colorado—a monumental slit in the red guts of God's good earth. Colorado's last precious remnant of "western frontier" can swallow unsuspecting wayfarers into insignificance. Near the mighty Delores River at the boxed canyon north end, the valley floor is a patchwork quilt of irrigated hayfields and bean crops that eek a living for a handful of families. Were it not for Bedrock and Paradox, two scrawny unincorporated "settlements,"there would be nothing on a map to indicate people live in such places of quiet desperation. It's not entirely true; poor, maybe, desperate, not so much, as this a chosen life of hardship and toil that harkens back to simpler times. I have a suspicion that children raised here can't wait to get out. But at some point in a spent, fast paced city life, they long to return.


I don't think you could fill a bag of groceries or a pump a gallon of gas from Bedrock and Paradox put together. Bedrock has a couple of ramshackle buildings, stooped by time and cursed with loneliness. The historical "Bedrock Store" has once again closed up shop; it's available…waiting on some solitude seeking entrepreneurial poet or artist to come along and hone their "craft" without interruption.  The obligatory post office is a part time operation, it serves all of a few dozen farm and ranch families—spread over countless miles—some an hours drive distant.

If it's seclusion and solitude you seek, it awaits in Paradox—a noncommercial settlement for the most part, and several miles off a lesser traveled road. There's a collection of houses, most of which have seen better days. Only a few have fresh paint and straight-fenced yards. Today there are indications that one of the quietest places on earth has been found out, as a few really nice homes have sprouted in the foothills above Paradox; view snobs, you know... 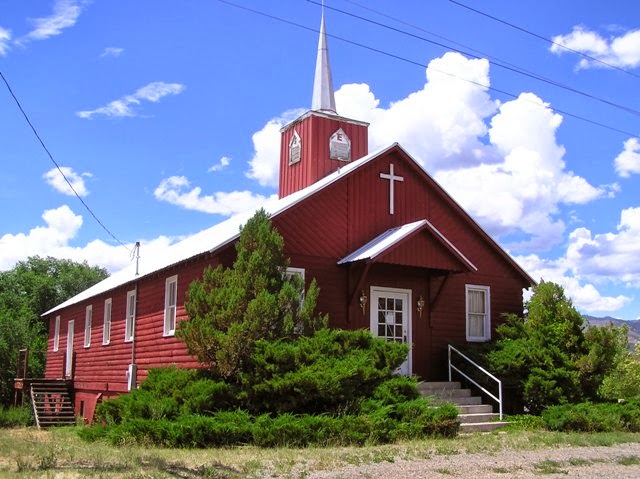 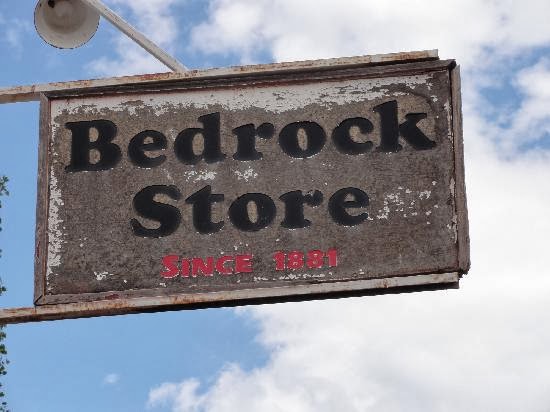 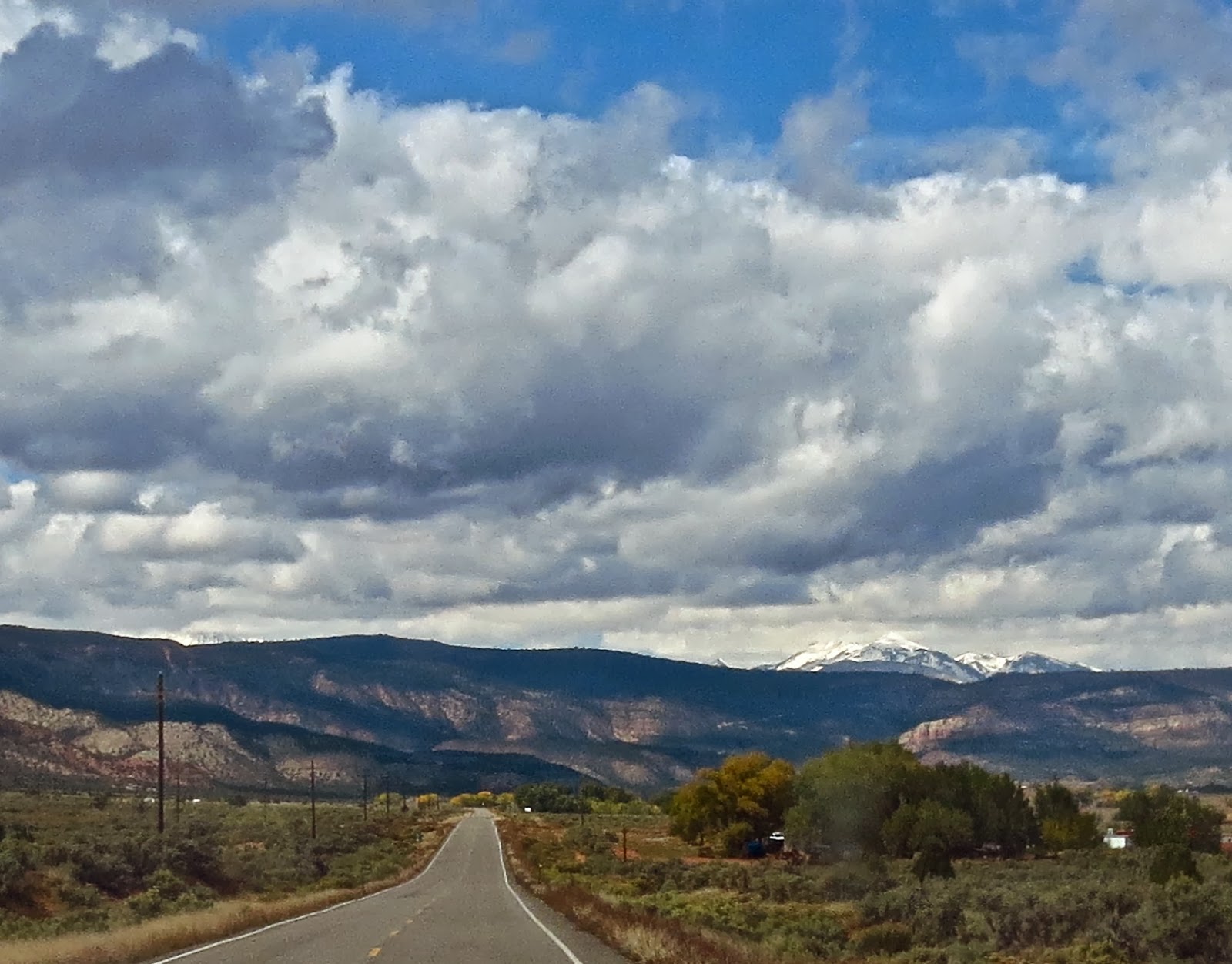 About twenty some years ago Bobbie and I camped at Buckeye Lake, a ponderosa lined "pond" on a National Forested rim a couple of thousand feet above Paradox. We climbed on our mountain bikes with determination to make a loop ride, down off the red rim, through Paradox and back up an endless series of switchbacks to our camp. It was touch and go—required some trespass—but we eventually made it to Paradox, out of food and water, with all those switchbacks between us and camp. It took all of three minutes to pedal Paradox. If there was a place to buy Cokes and Ho Ho's we sure couldn't find it. If one wants food, gas, and a nearby school for their kids, they better pass on Paradox.

Exiting on a nearly straight and very narrow highway, we saw a sign that warned, "Caution: This road is not snowplowed after dark." If you get stranded in Paradox Valley—for any reason, even without snow—it's not like you could just walk up to someone's front door to seek help. Neighbors are far and few; there's just nothing there but unpolluted views and solitude. The tow bill alone could easily approach a grand (hear that Goldie?). Maybe that's where it got it's name, "Paradox." It looks so beautiful, appealing, quiet, slow—but after a year or so most city folk would come down with a case of "Island Fever." It's a hundred miles round trip to the nearest school and hardware store, two hundred to a lumber yard. Solitude has its price.

Colorado's "west end" is one of the few remaining under populated, loneliest road places that you've ever never heard of. Pick up a map of Pennsylvania or Ohio or Virginia sometime and zoom in close with a magnifying glass. You will find a spiders web of roads dotted with thousands upon thousands of burgs, towns, and cities—sprawling suburbs reaching out to gobble up farms and quaintness—and they call it "rural living." I looked at an Ohio map once and couldn't find a place where it wasn't but a couple-three mile walk to "civilization," either a town or a road to a town; impossible to get lost there. It is remarkable and fortunate that there are still a few "frontier" places, mostly uninhabited and un-carved up, places like La Salle, Bedrock, Paradox, Redvale, Nucla, Naturita, and Norwood—with its infamous "hill" where, if snow and ice don't put you over the cliff and into the San Miguel River, falling rock might. 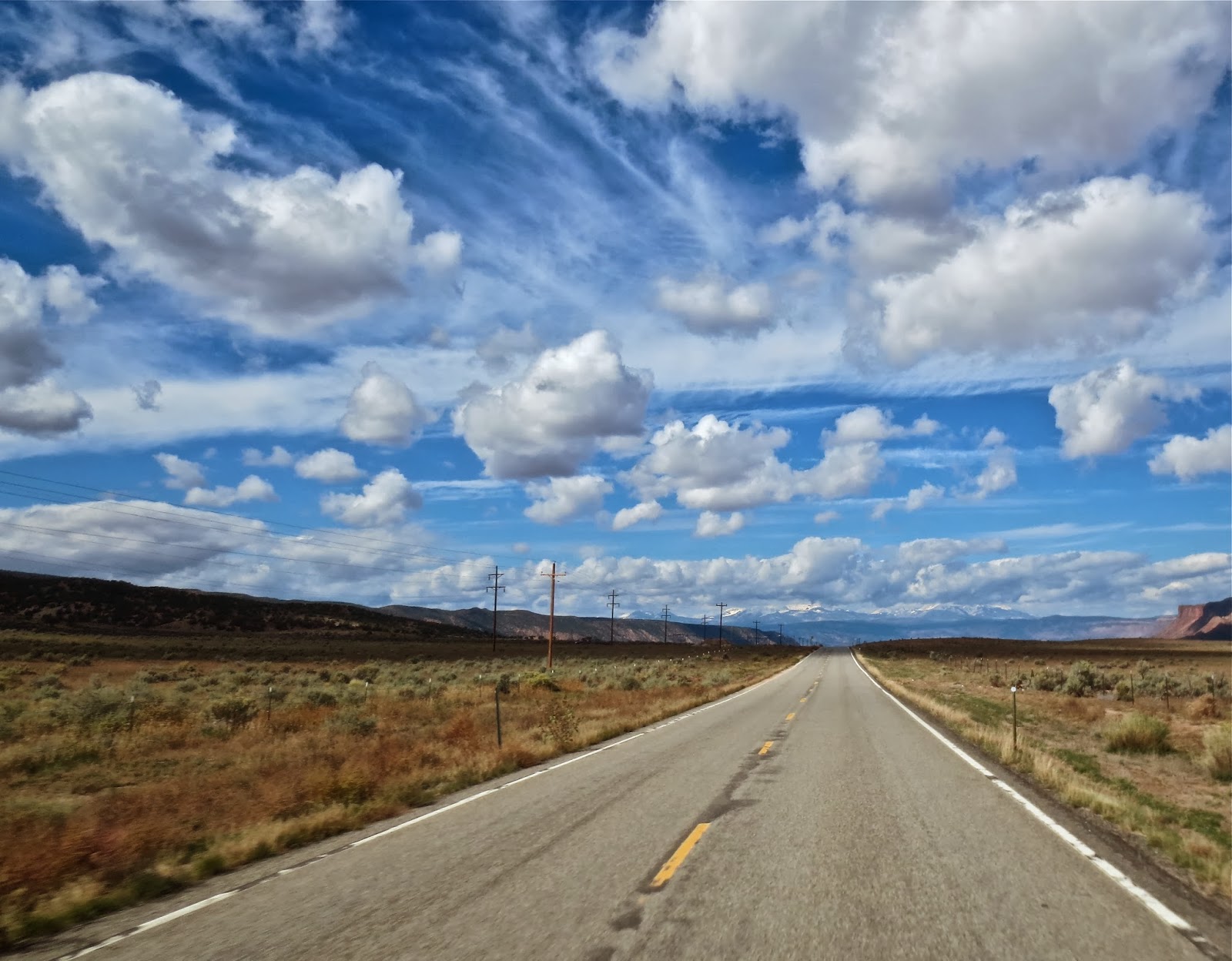 That "stretch of good weather" I spoke of above has been ushered out by a soggy, snowy, pineapple express that's packing a punch to the gut of the entire west. But here are a few shots from our local walks before the storm...where we stumbled across Little Bighorn... 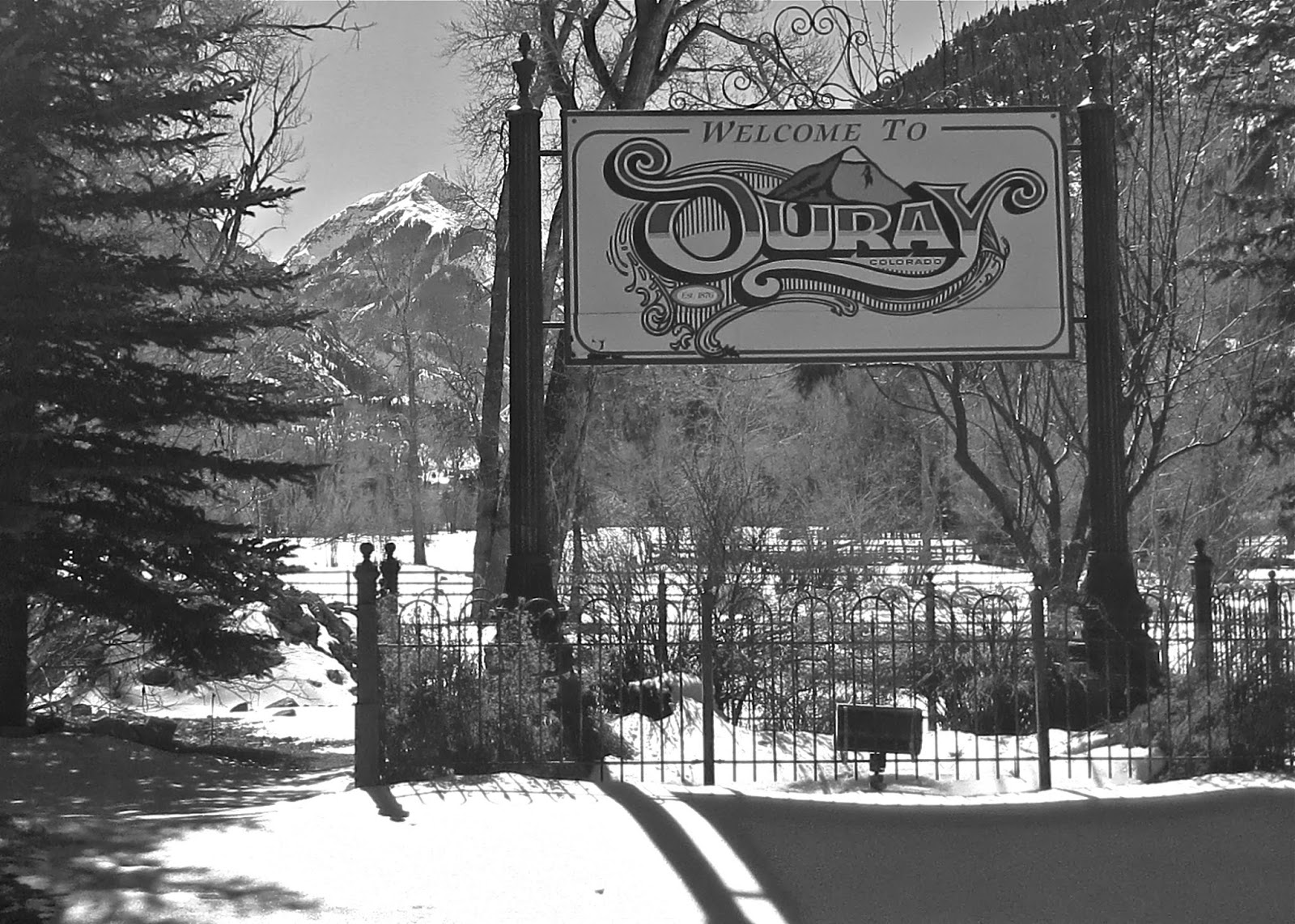 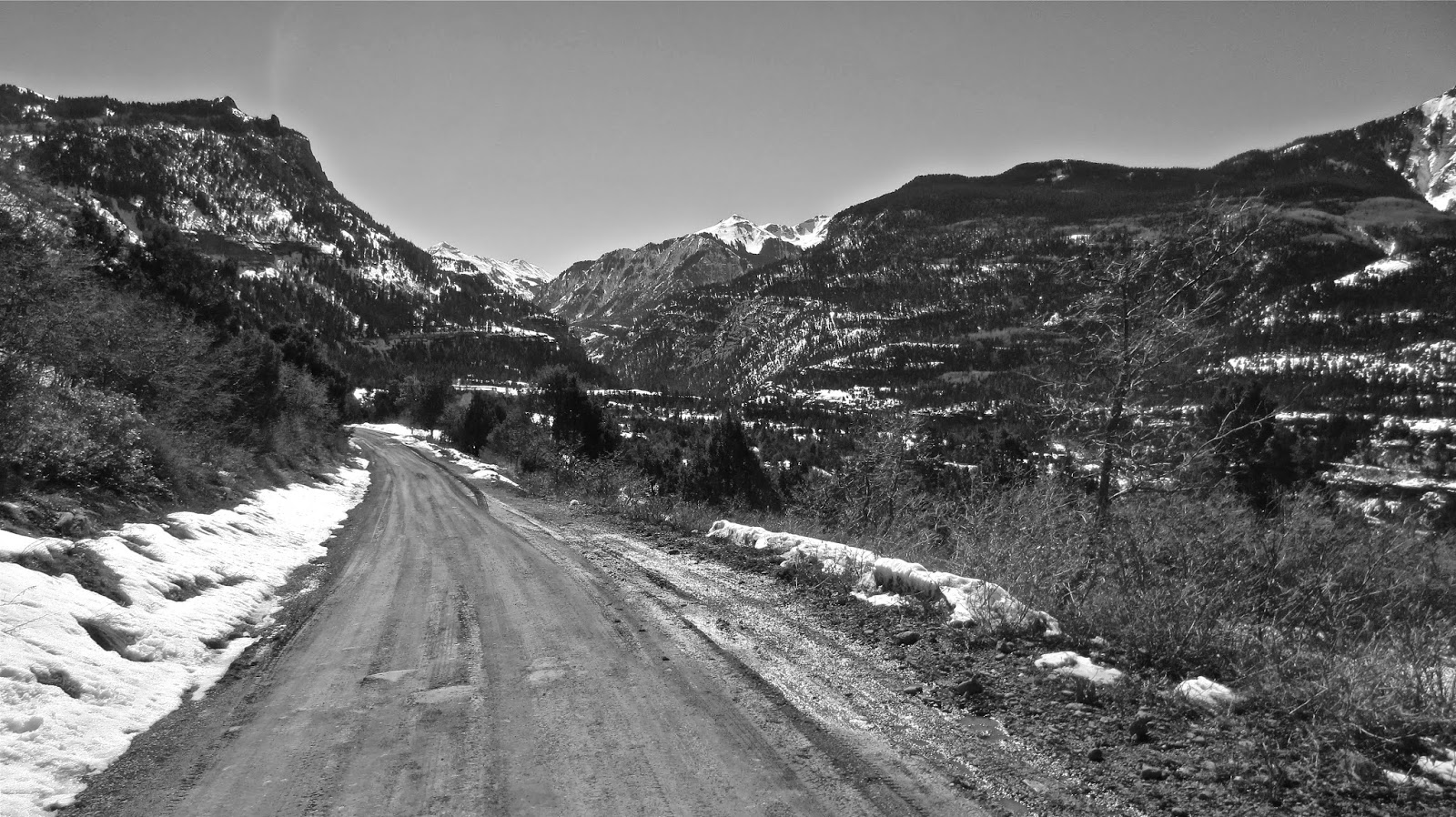 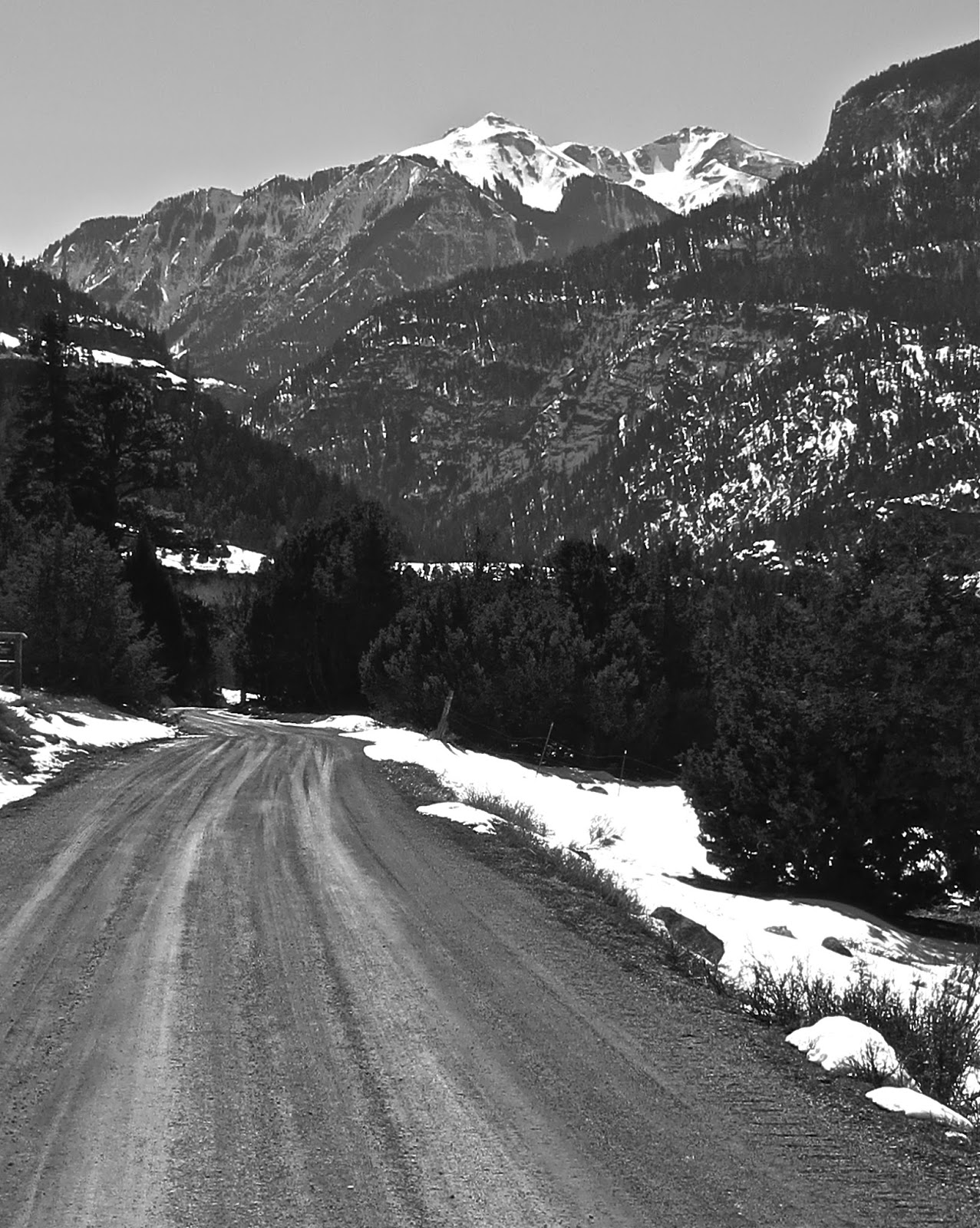 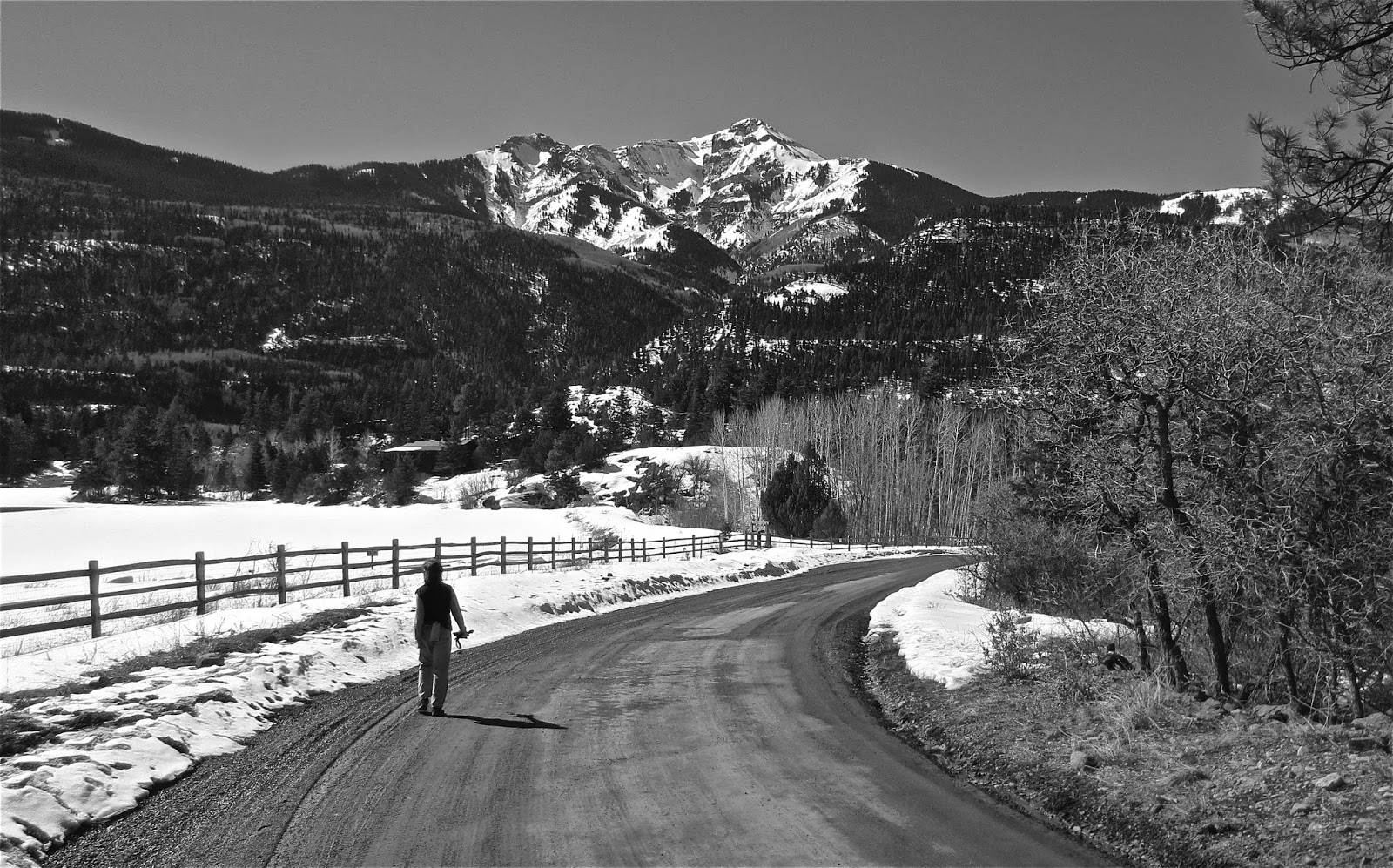 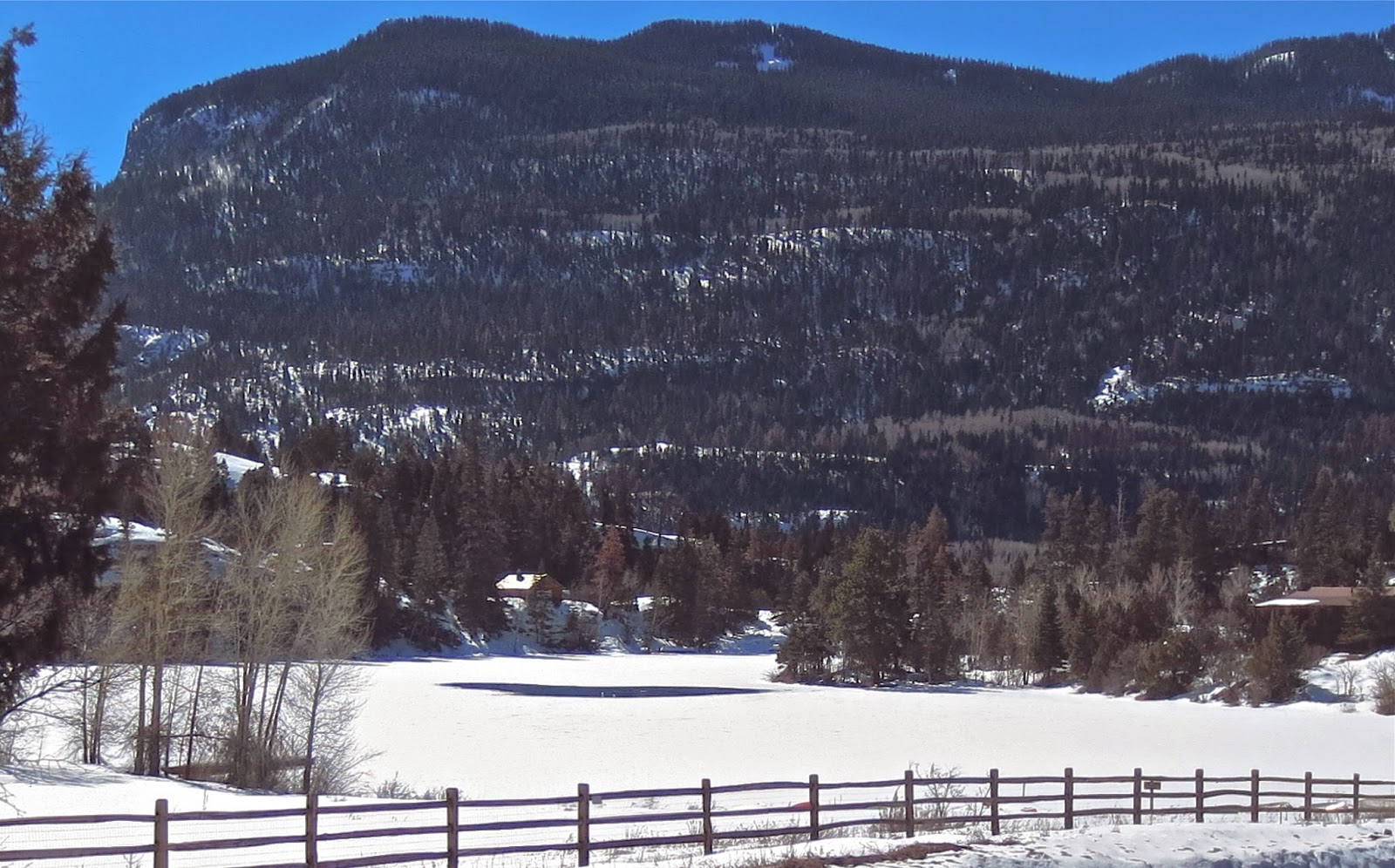 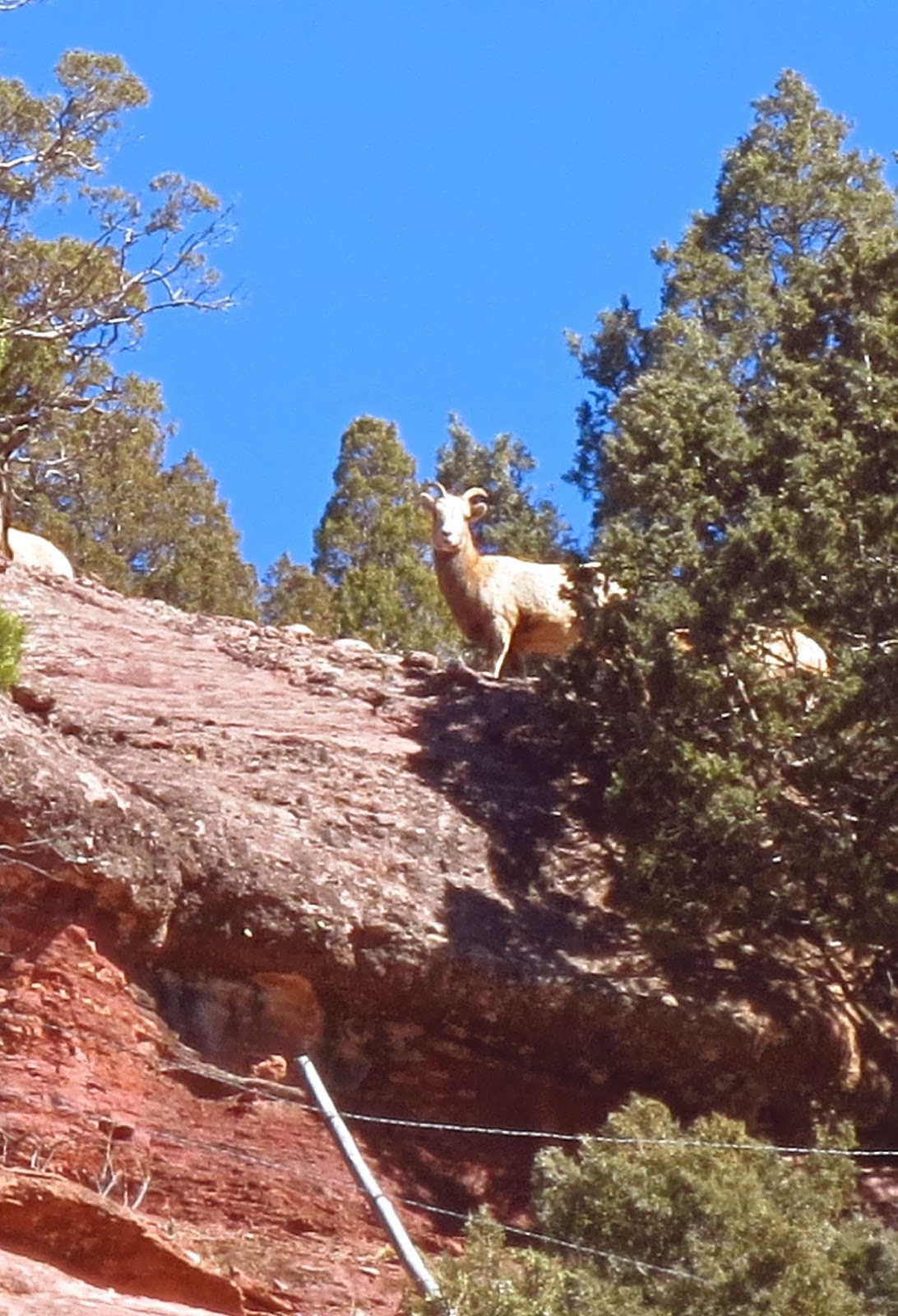 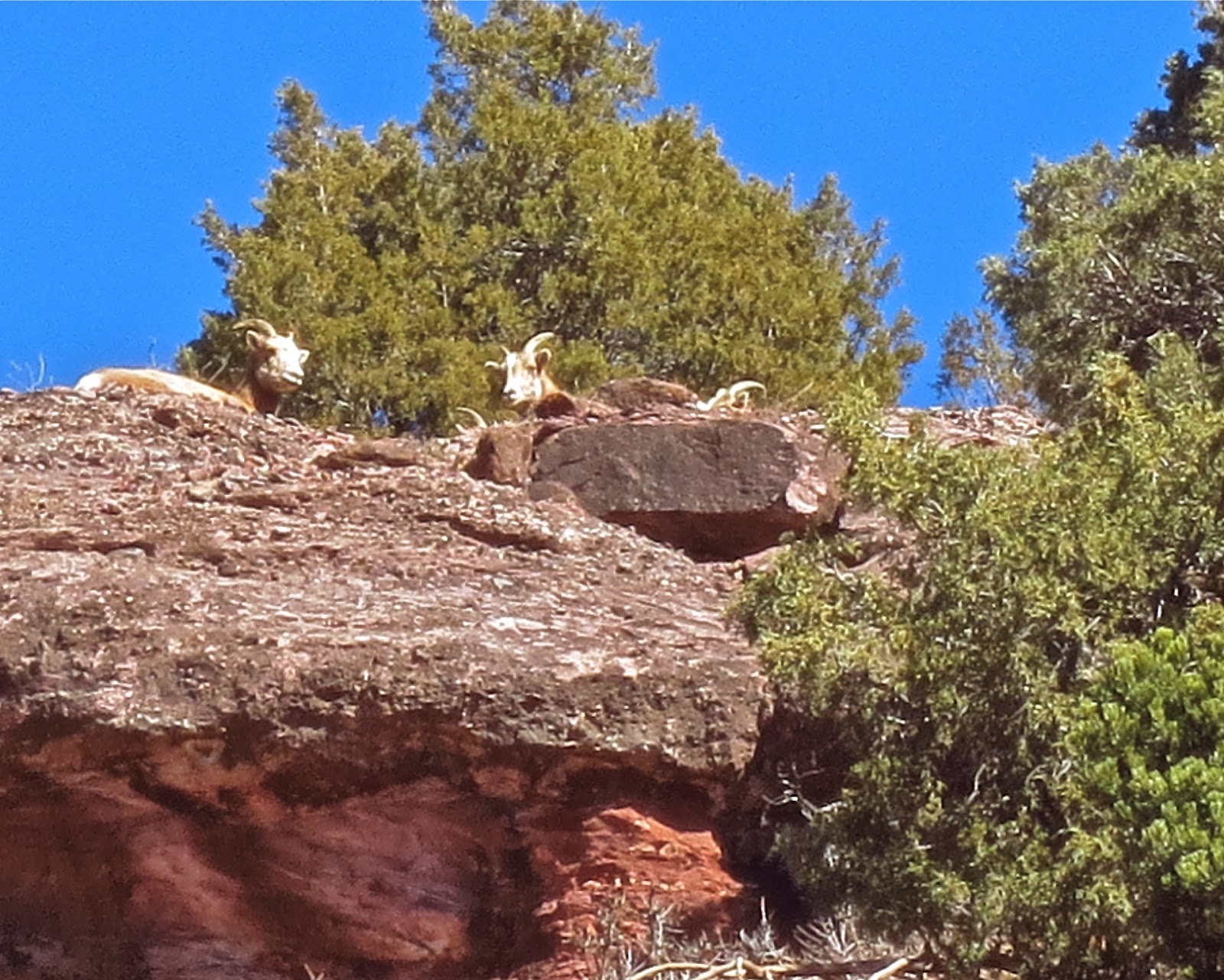 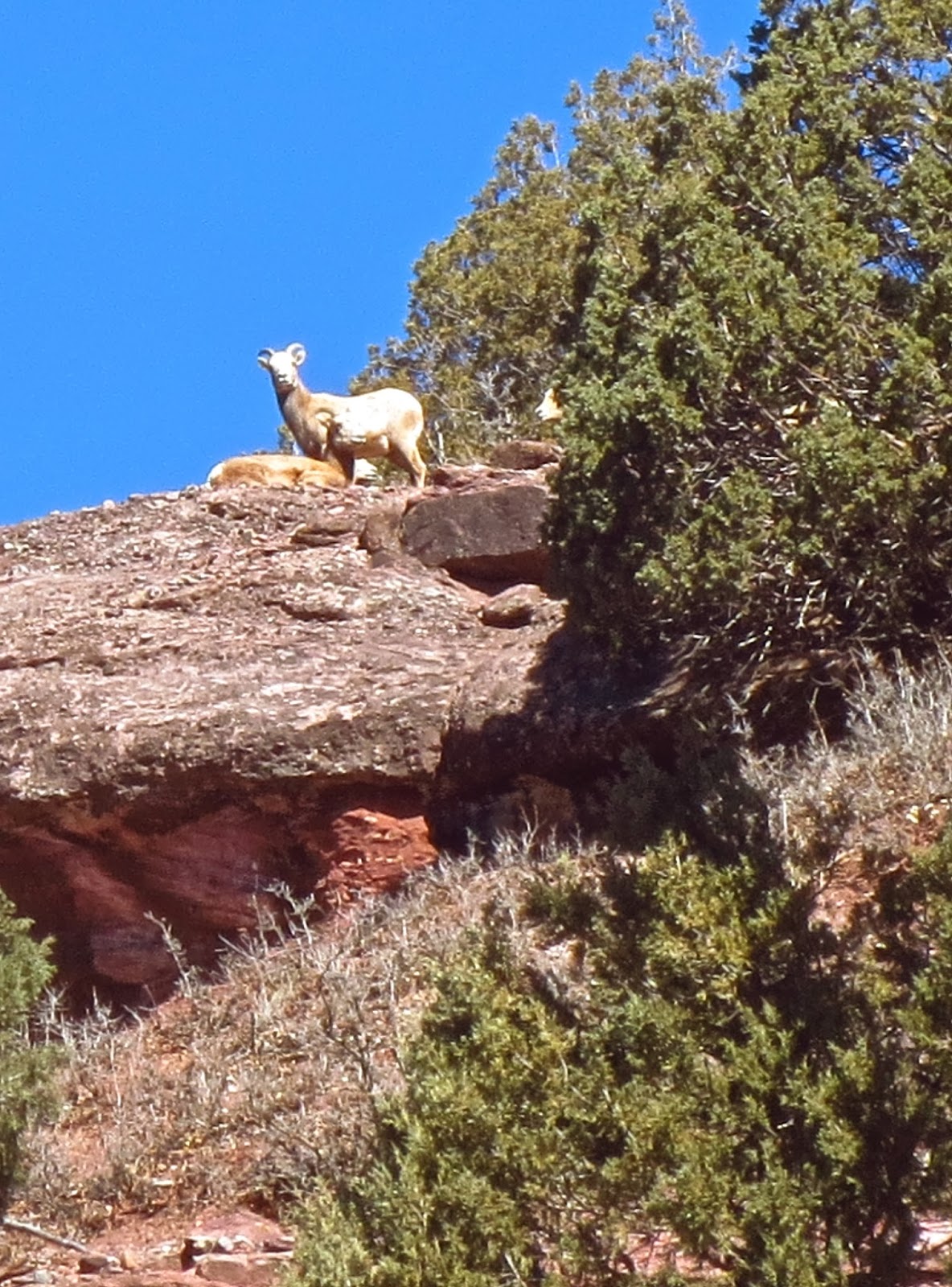 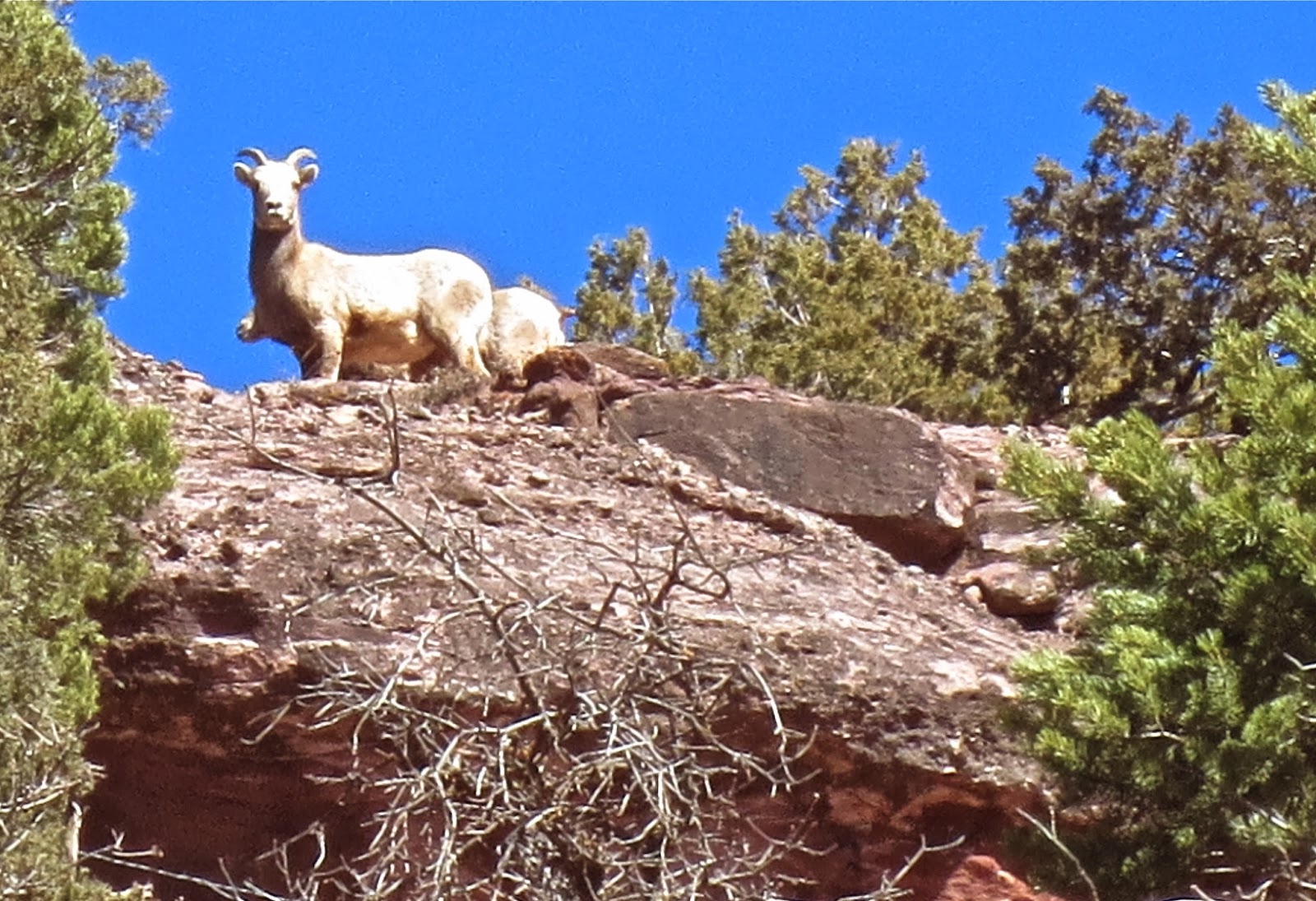 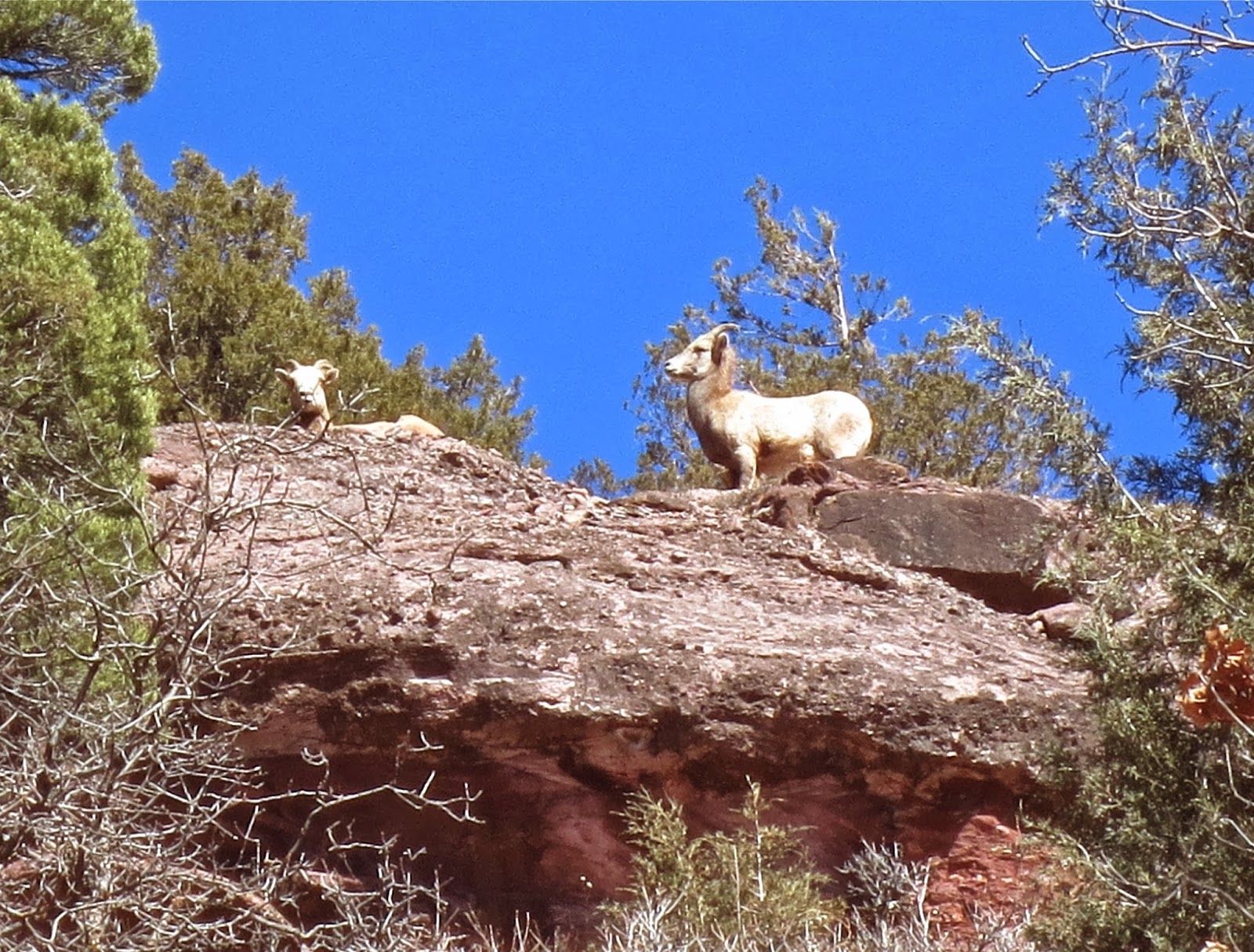 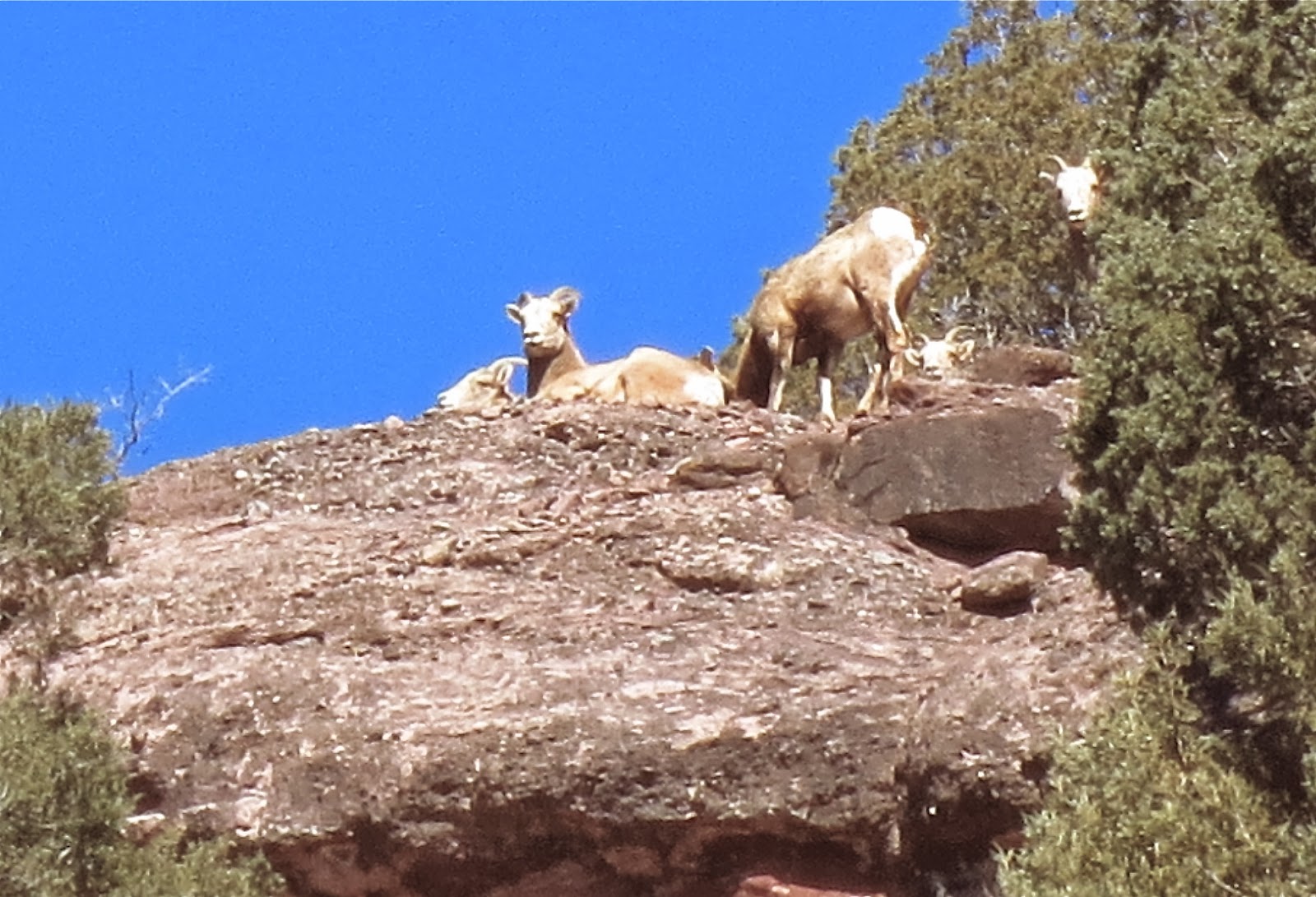 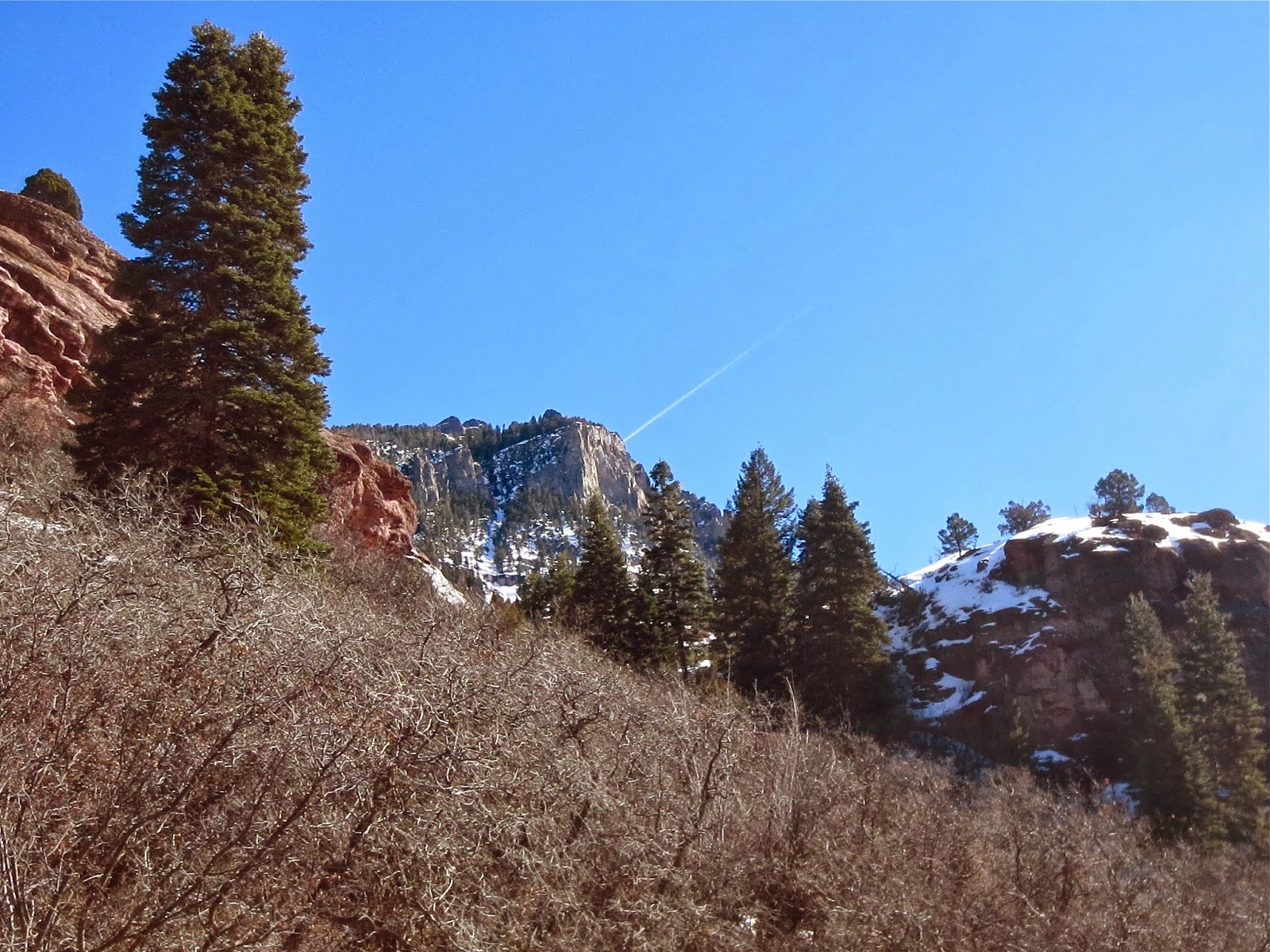 With a couple of wet days forecasted, I decided it would be a good time to paint, as opposed to write, write, write…which makes Jack a dull boy.

In the top photo below is a photo of a photo (yes, there probably is a better way to say that). I have the original hanging in our living room. It was taken in Kawaii by my photographer/tech guru/nephew Darin, as a storm approached the north east shore. Using my (poor) photo of his photo as a reference, I attempted a small sketch in order to see if I could replicate the wind-lifted spray coming off the top of the wave. As you can see in the lower photo (my painting) it didn't work out. My sky paint ran down into the area reserved for the white spray. Maybe I should have used some frisket. Maybe next time I'll try that, or just allow more room and, just before the sky dries completely, use a dry-brush to drag some of the pigment down into the white area left for spray. A dry brush is good for a lighter touch, "feathering," where you need just a little pigment that fades out as you drag it into white areas.

Another lesson learned; a million more to go.  I'll give it another go soon. FYI, to simulate clouds in sky use a tissue to blot up sky paint just before it completely dries. 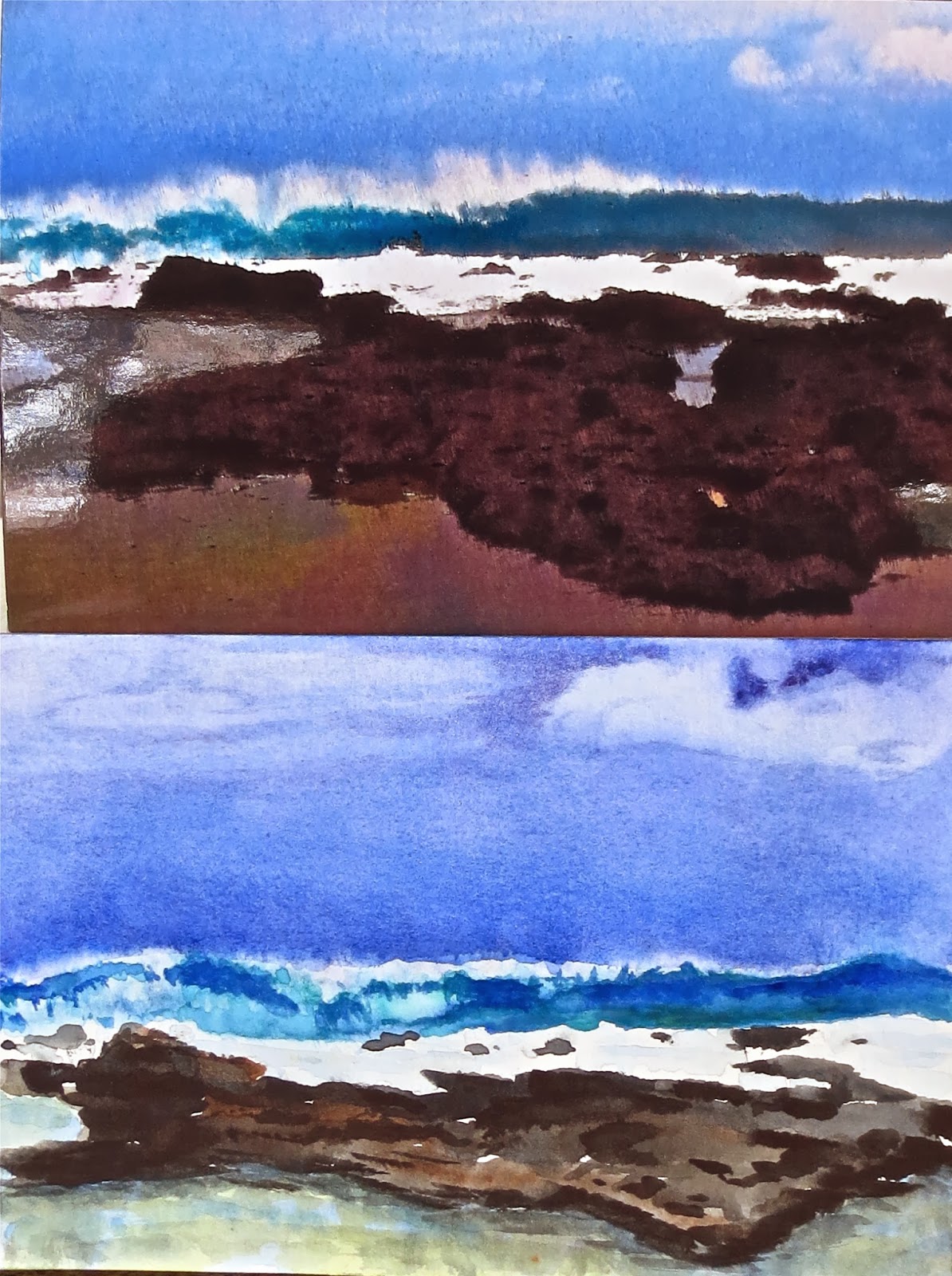 And while were cruising the Art isle, www.cheapjoes.com has great prices on art supplies.

Now, fresh off the easel, "Spring Thaw in the Lasalles," inspired by this post. I had three absolute, abject failures in a row prior to this that went straight to the trash before anyone would notice. Failure is part of the learning curve with watercolor…especially if you are over-ambitious like me in what you choose to paint. Don't let failure become a big deal, it's only paper and time.

I wouldn't call it "fine art," but it's growing on me, probably because of the bold foreground colors…not really my personality. I guess Bobbie's style is rubbing off. It's a little busy…not quite sure where the focal point went. I was trying to make the mountains and cloud formations the focal point, but with all the bright colors in the fore and mid ground the eye has a tendency to get heavy and "sink," to linger in the action/brilliance zone. It is the mark of a good painting when the eye roams, but keeps coming back to a focal point, only to leave again and return…and so on. Oh well, I was just happy that I didn't have to trash four in a row. We'll see how I feel about "Spring Thaw"  tomorrow :).

Posted by Box Canyon Blog.com at 8:23 AM