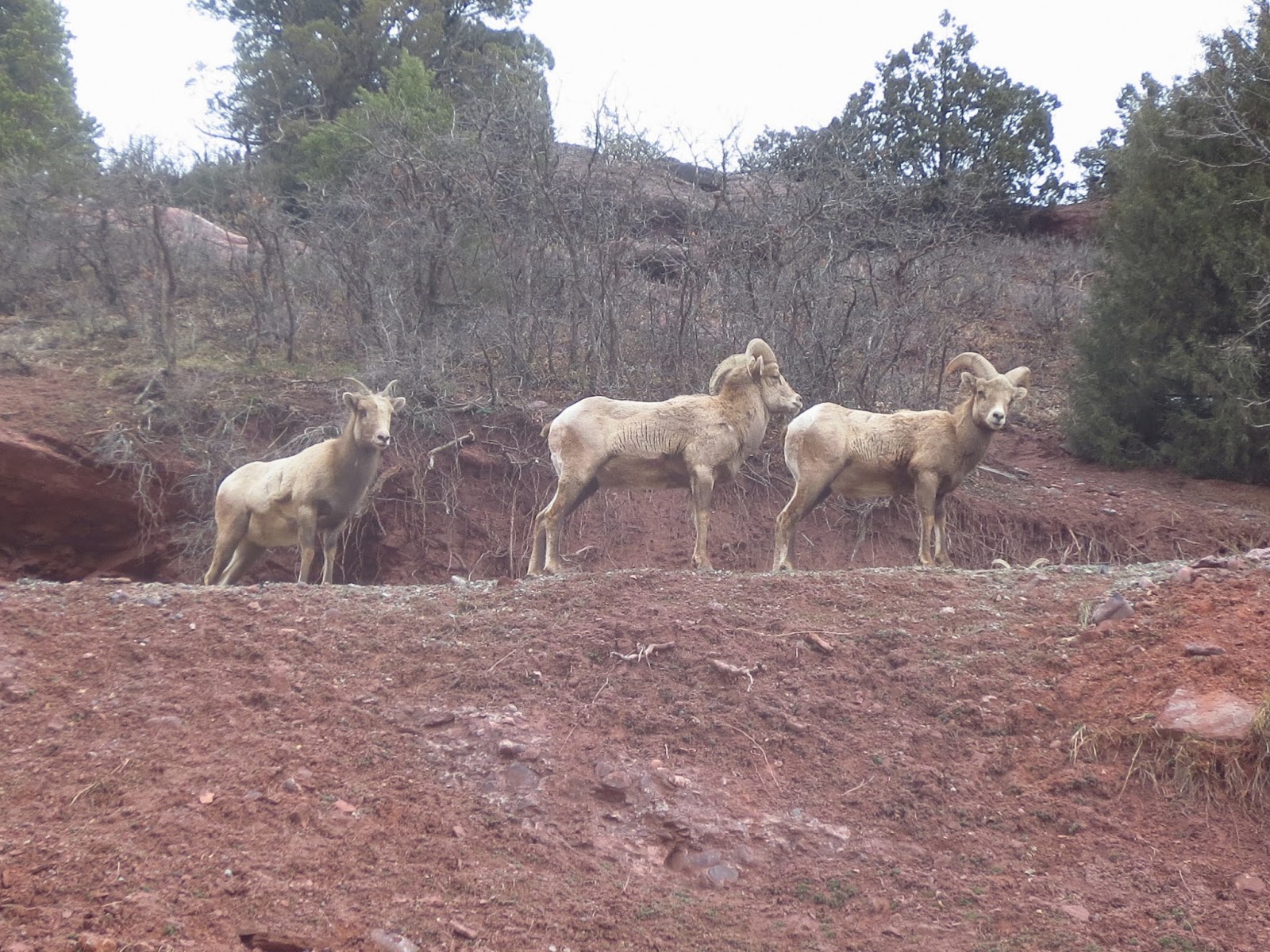 We ran into a couple different groups of Big Horn Sheep on our walk up county road 14 yesterday. They will begin moving out of The Crevice and up into the high country in a couple weeks, to get away from people and birth their lambs on the edge of a cliff in peace and quiet : ().


Lovely Ouray is a winter home for local Big Horn. They hang out in Town Park, nibbling on tender grass under the snow. They also like to lick the salt mixture applied to de-ice paved roads; they are not shy when it comes to their salt addiction so it's not unusual to come flying around a corner and find sheep standing in the middle of the road.  They seem to be curious creatures, always staring down from their rocky perches with a quizzical look  as we saunter by.

Most of the snow is gone from south facing cliffs above The Crevice, but our shaded front yard still has three feet. I have a feeling it will be nearly June before it's gone. If it turns off hot real quick as it often does, there will be some flooding as a result of all the snow in the mountains this year. We saw a dozer in the river making room for high water. There should be some snow on the peaks around here all summer and into fall this year; been a while since that's happened.

Temperatures are warming up into the 40's and low 50's now…a real blessing. I've made the transition to shorts and I'm not going back! We'll still get some good snows, but short-lived.

Bobbie trekked up Oak Creek Trail a couple of days ago. She kept the snow on that trail beat down all winter so she could get a good steep climb in. I'm laying off that one till after surgery.

Time to go for a walk, snowshoe or hike, then get in a jam session on the keyboard before settling down to either write or paint. The right side of my brain does not lack from stimulation lately…I just hope some neural connections are being made. 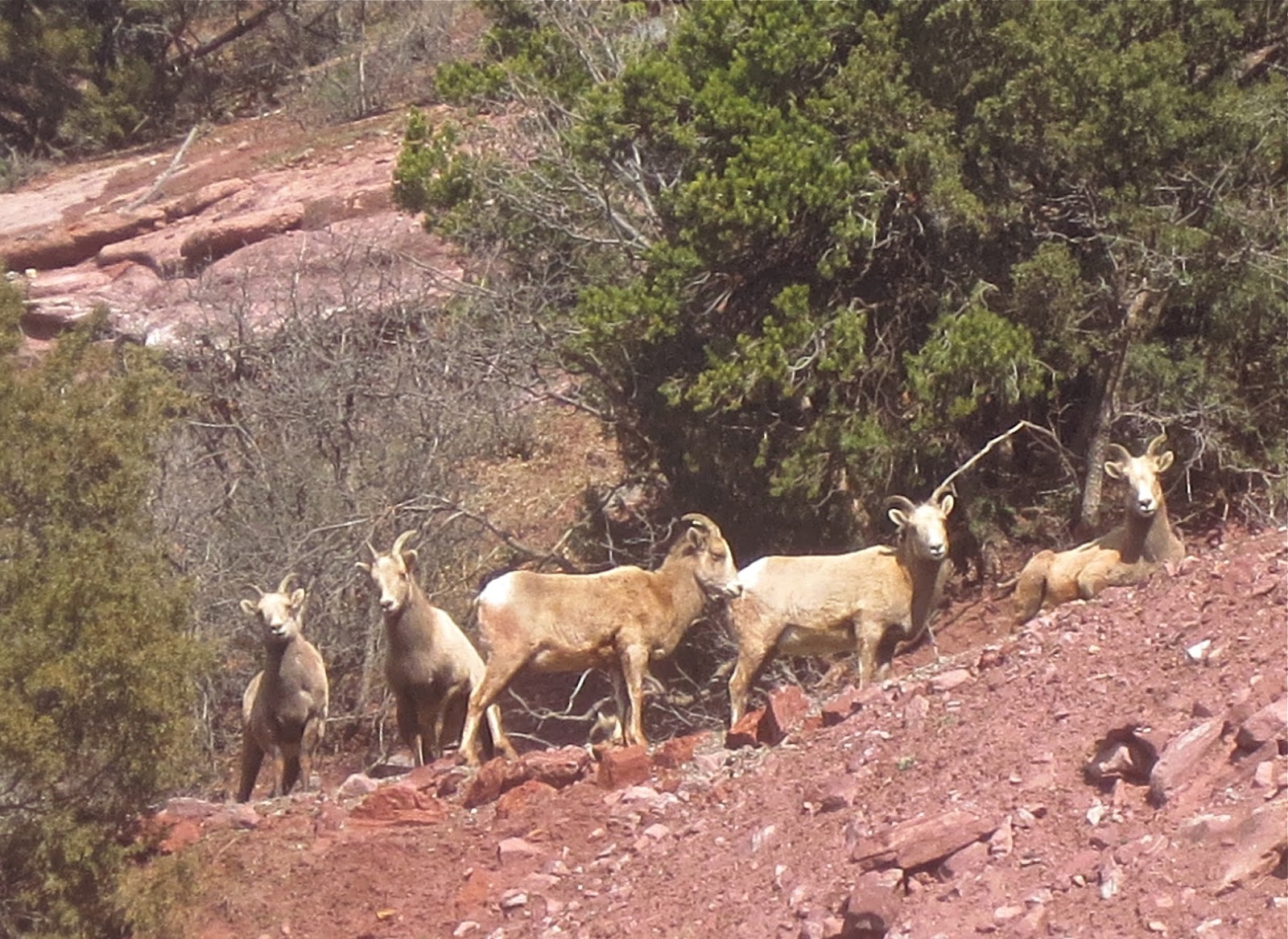 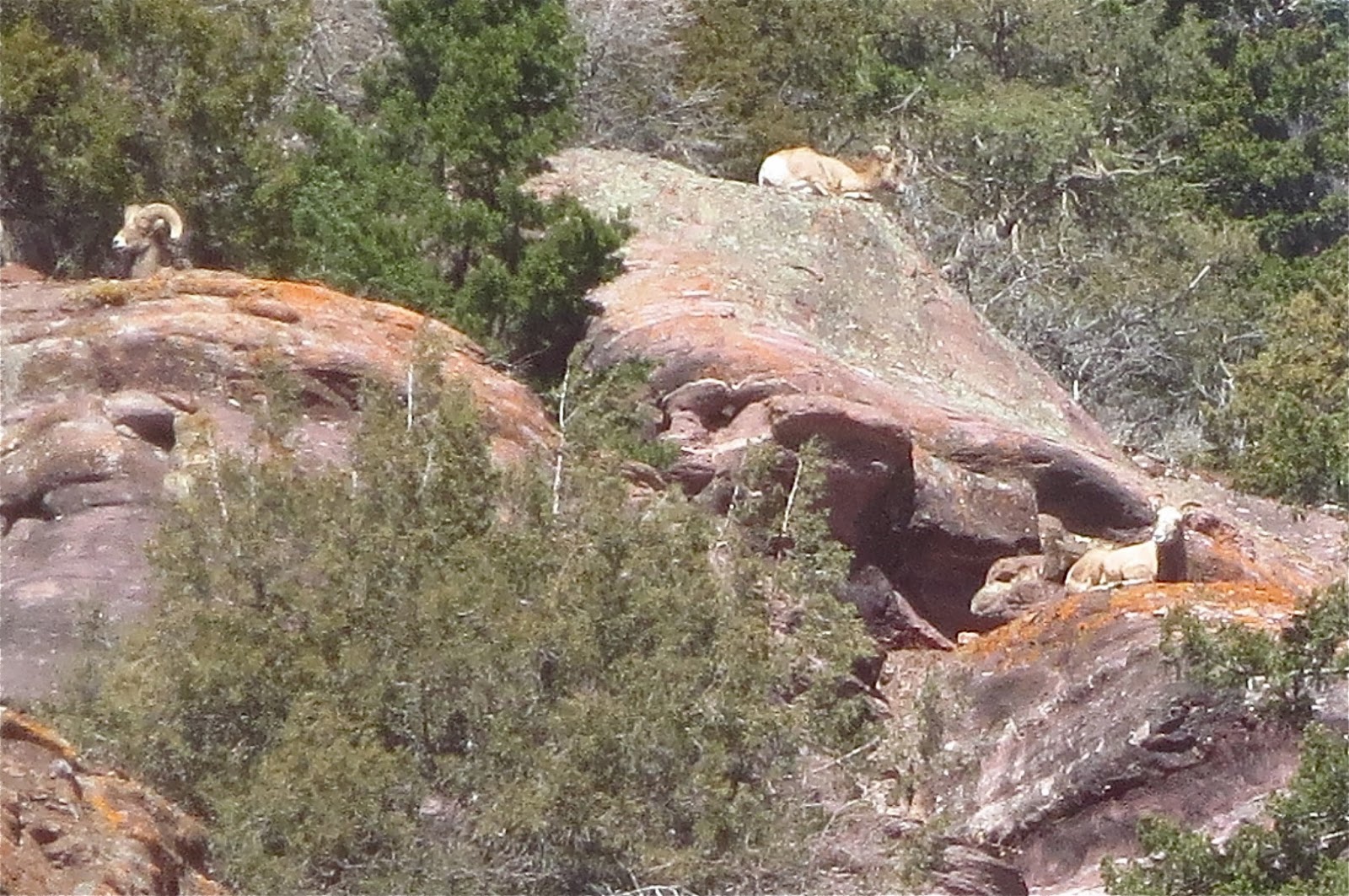 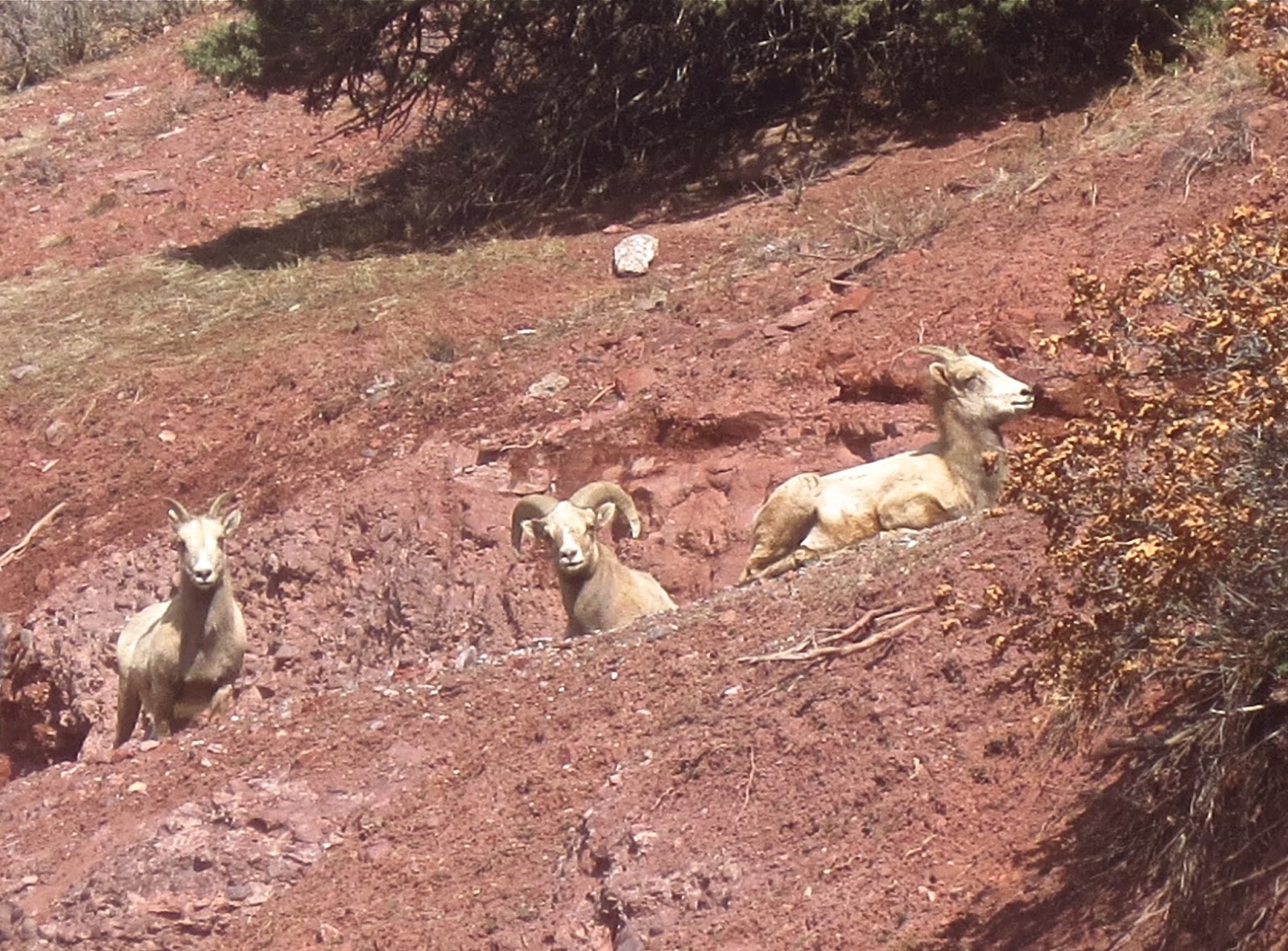 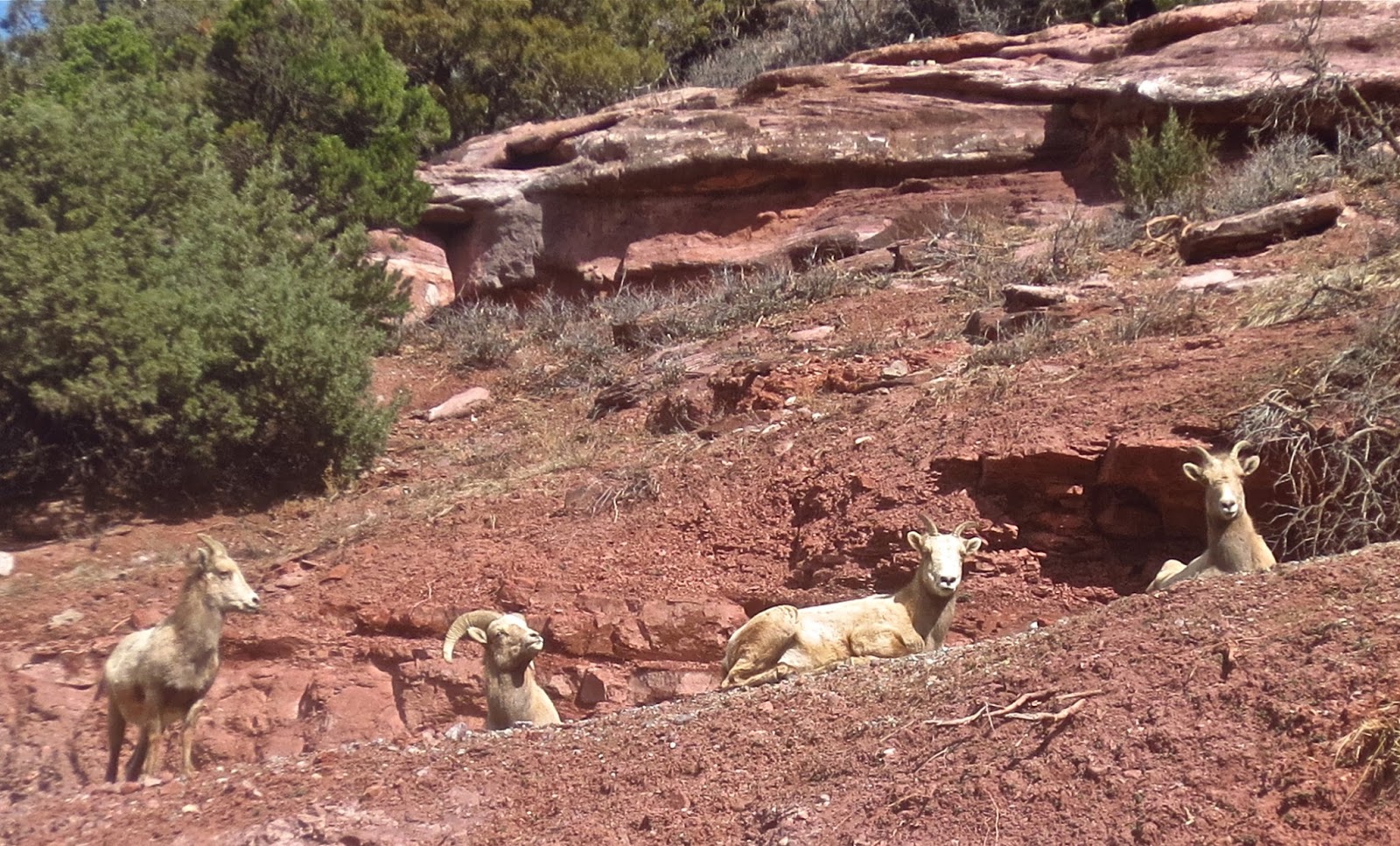 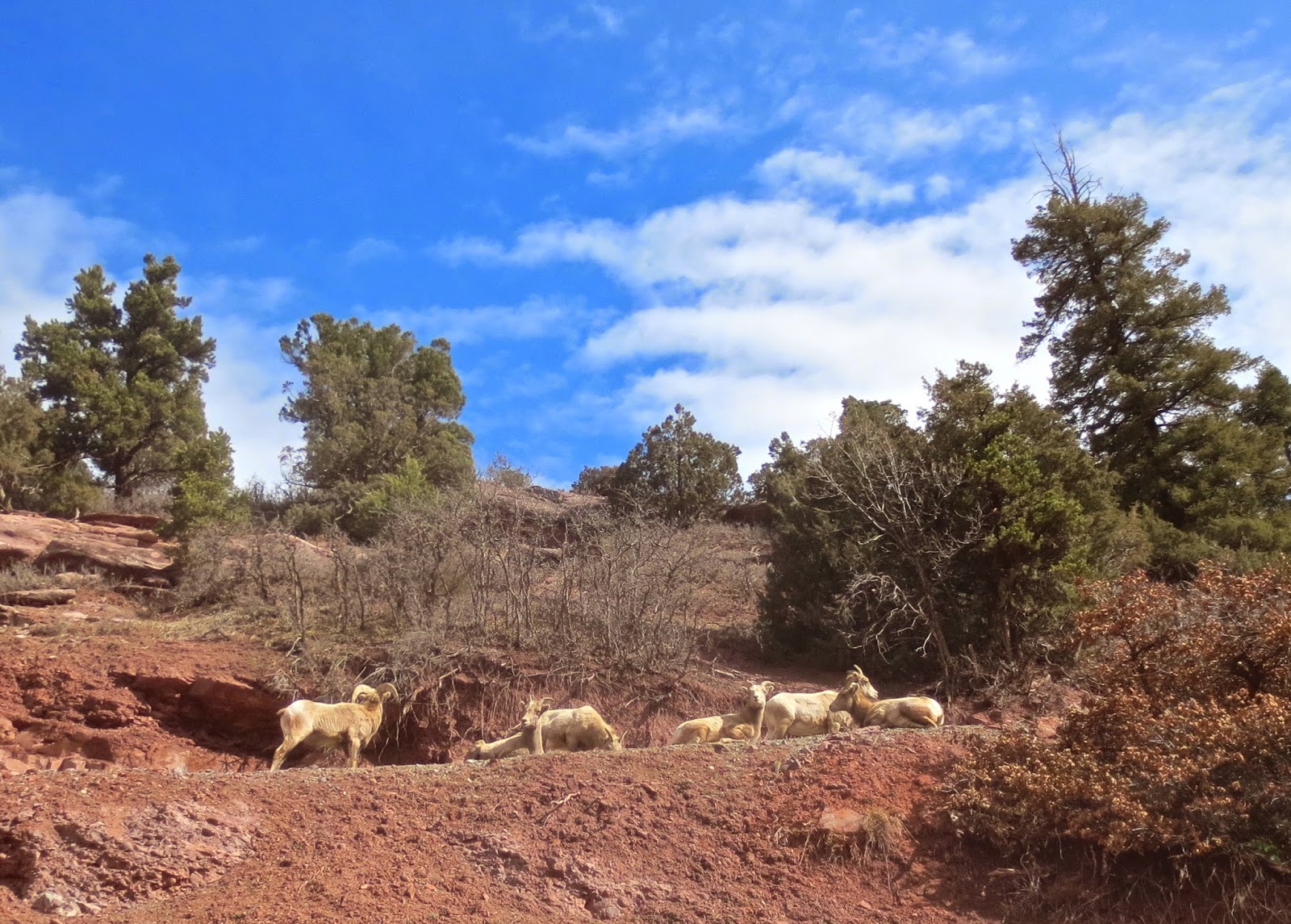 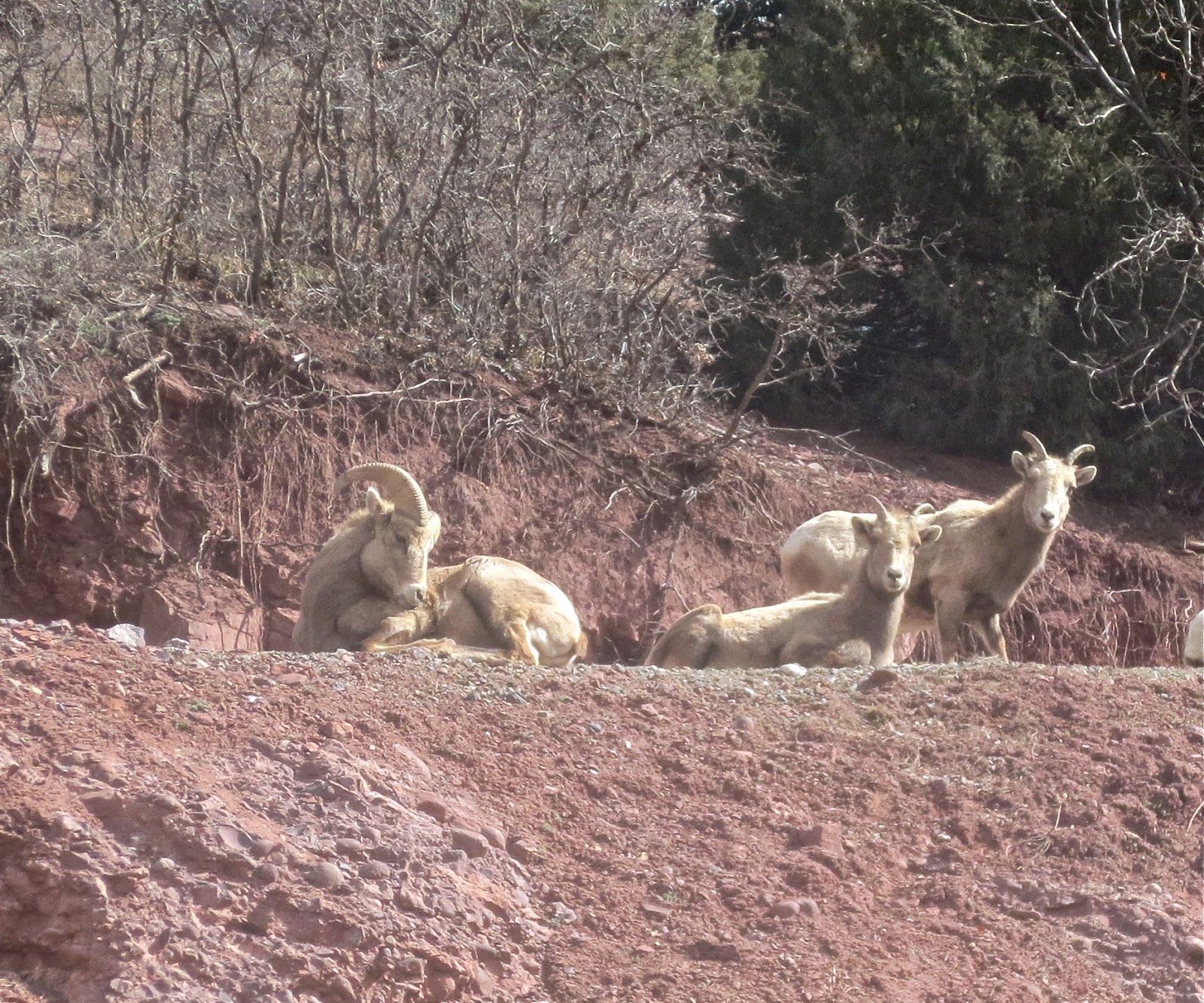 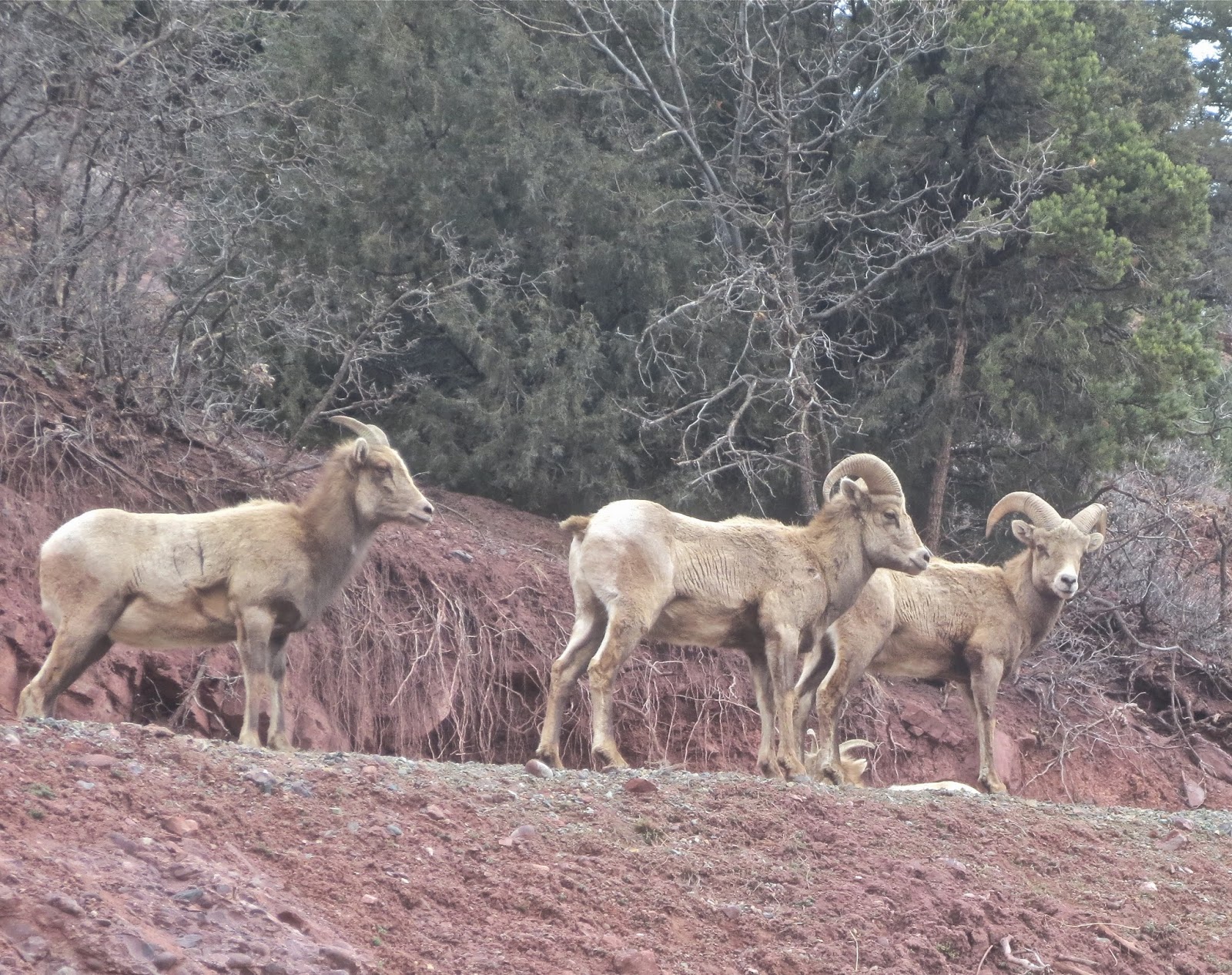 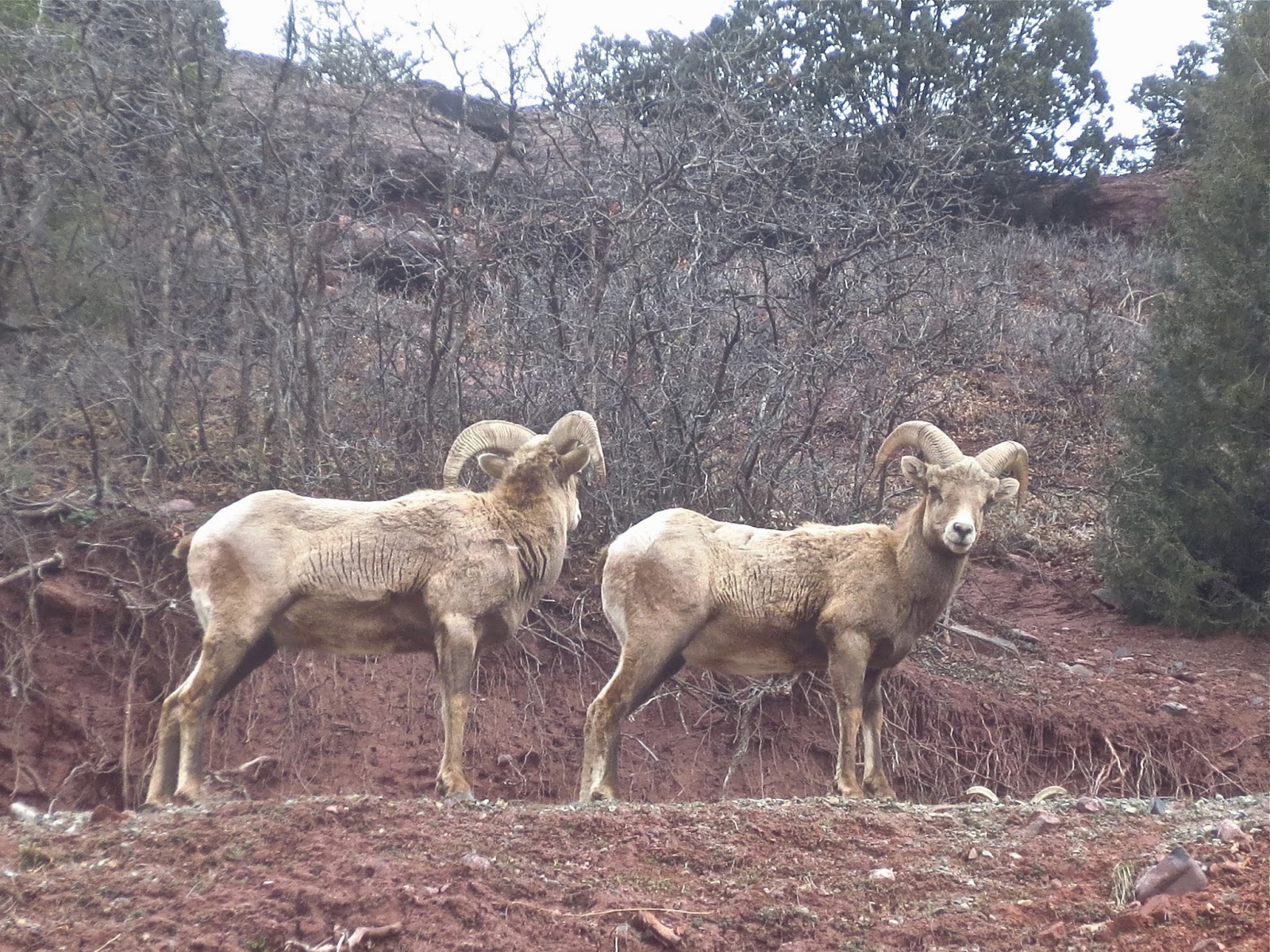 Now for a brief art segment, one I hope will help keep budding artists out there from getting discouraged when they have tossed the last ten out of ten paintings into the trash.

What if I told you that it's part of the process of learning something you've never practiced and that it is normal? What if I told you that all you have to do to have success is to keep painting, no matter how bad you think your work is, and that you will have a few pieces that you actually like... enough to frame or give away in due time? To show that doo doo happens, here are a couple of paintings I did this week...


I like the distant mountains in this painting, but got a little bogged down in the foreground…Bobbie came out too dark so I had to further darken the ground around her so that she would show up better…
Anyway, the spirit of the sketch is there and waiting to be repainted. It is a good exercise to paint the same subject several times in a row, correcting what you didn't like and putting back in what you did  like. 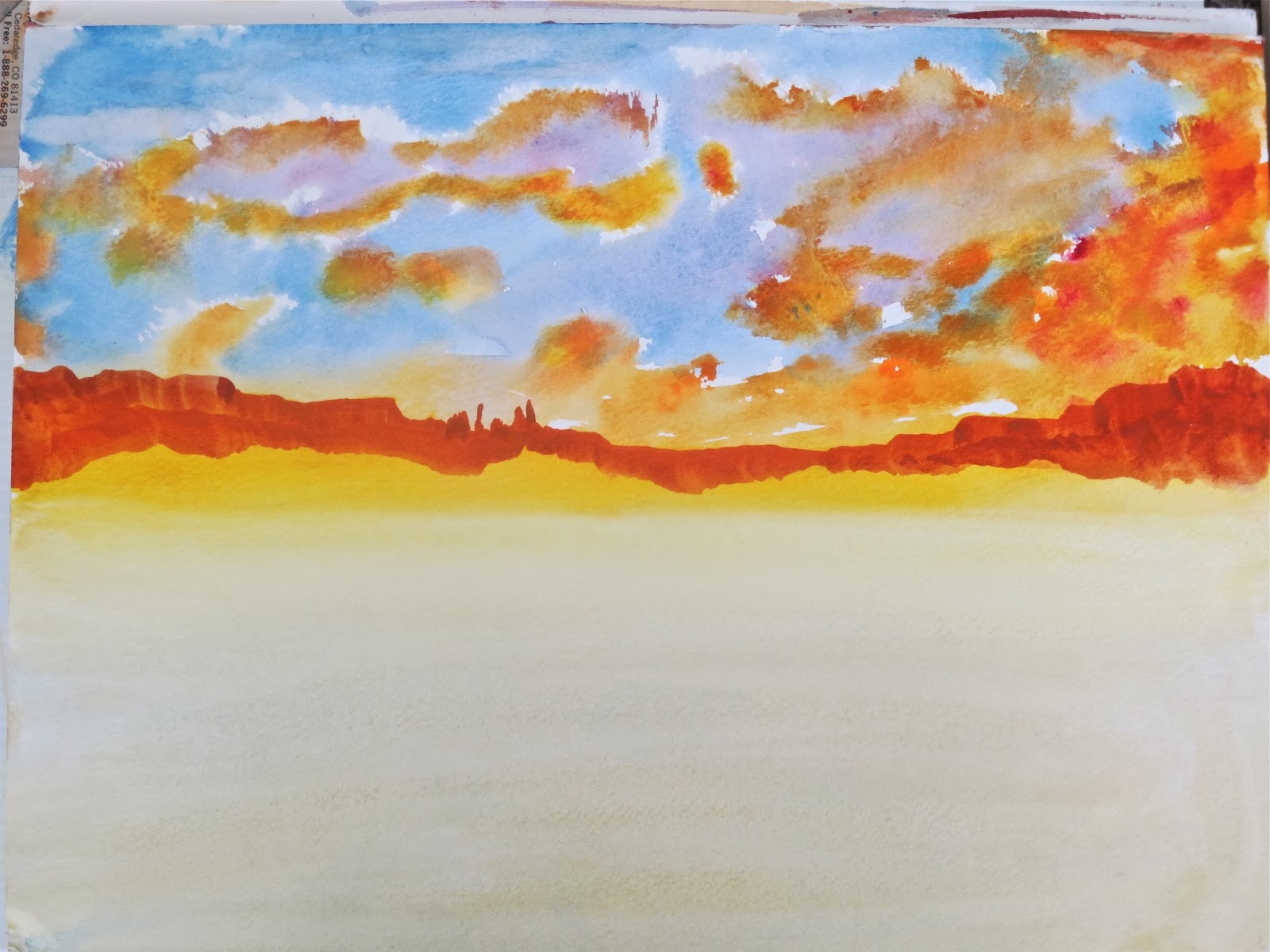 Now, what to do with all this fore and middle ground? I thought a couple of cowboys with some cattle would be good, but screwed up the cows. So I covered them up with some cedar trees, that, in the end, didn't salvage the painting. Chalk up your "losers" to experience, and don't think you are the only one struggling. Find something good to say about every painting by covering up what you don't like, or even cutting out the "good" part and just having a smaller painting. Just because you screw up one part doesn't mean you have to throw away the whole painting…unless, that is, you really screwed up. :) I do like the sky and distant red rock range in Uranium Cowboys…even the cowboys are ok. But the rest? not so much. :((


I'm proof that watercolors are not easy and that it can be frustrating when ten in a row have no redeeming artistic value. But finding something you like within a bad painting keeps you moving forward and painting. To illustrate that, I'm swallowing a lot of pride and showing my flub ups. You are welcome. Just never give up and a few days, months, years from now I guarantee that you will have a few paintings matted and framed, something that you are really proud of. Keep it a light, fun, and uncritical experience.

In a further effort to prove that average is ok…that we don't have to be pro's in order to have fun being creative, I'm throwing up (literally) a link to some of my studio sessions in Garage Band. If you have a Mac computer you know that Garage Band is a home recording studio where one person can record/arrange multiple instruments on multiple tracks and produce the equivalent of a rock band, or entire orchestra.

So here is the link….  muzak      Feel free to download anything you like and don't worry about "tipping" me. It was just for fun kind of stuff, something creative to do on a rainy/snowy day. There are a few songs that were long distance collaborations with my Nephew Darin in Pennsylvania. I would lay down a couple of tracks and email it to him so he could add some live guitar (he's pretty good). "Children of Groog" is a good example of that and it includes an ending done by my son, Caleb. "Discomfort Inn" is something Darin did solo one night in a motel when he was working for the "man." So I can't take neither credit nor blame :)) for that one. I'm on the keyboard, and also do a little bending on the harmonica once in a while. Most are instrumentals as their is no sing genes amongst us…tho I don't let such lack of talent stop me on one song. :(( Anyway, take what you like, if any, and leave the rest for the crows.
Peace out from lovely ouray…
mark
Posted by Box Canyon Blog.com at 9:43 AM