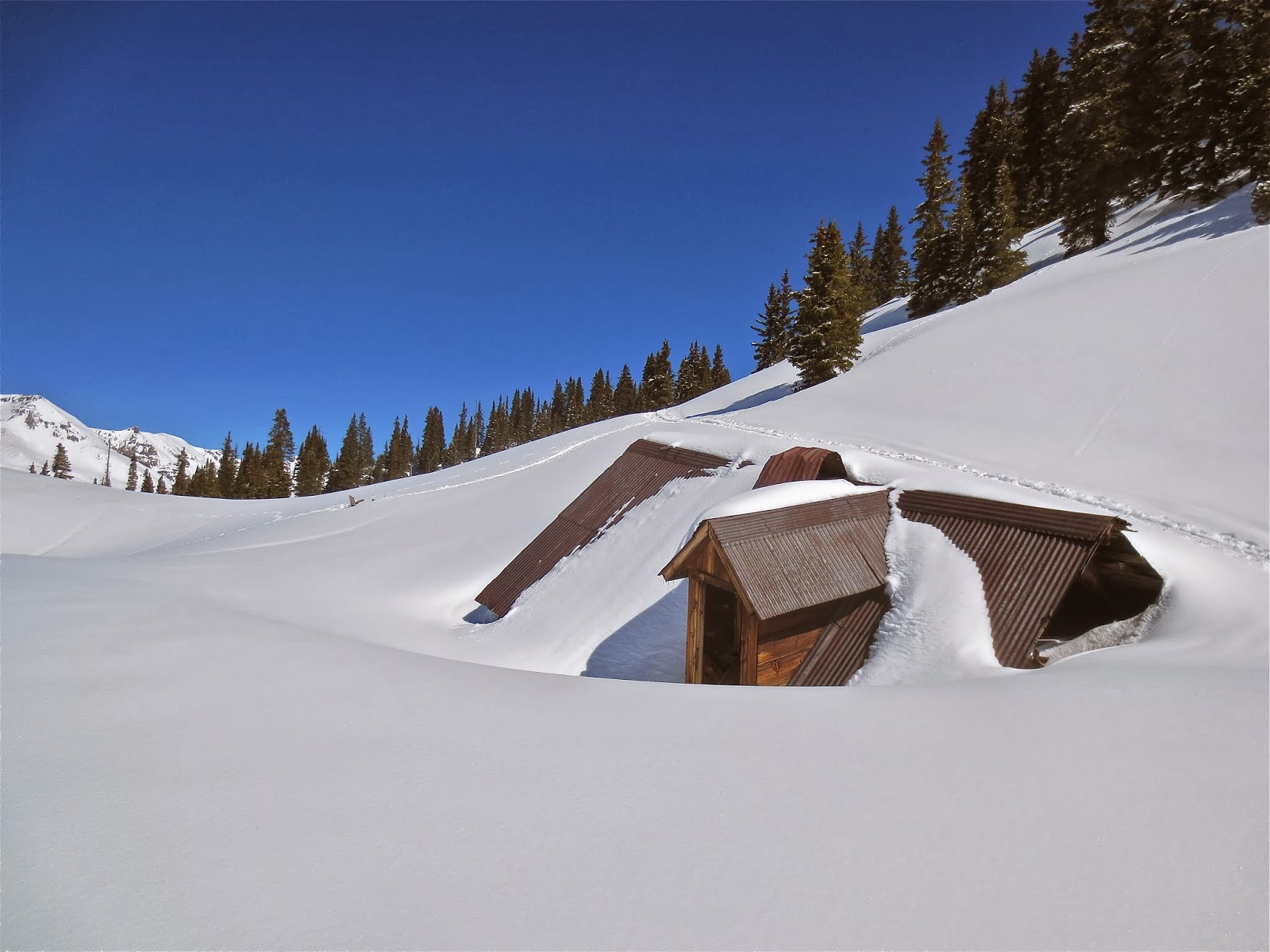 Once upon a time long, long ago, when the Box Canyoneer's bodies were younger and hardier, they cross country skied from Red Mountain Pass, above timberline, up, up, up to a 13,000 foot ridge just so they could look over the edge into another magnificent basin. It was a grueling climb on "skinny" skis; we had no climbing skins so there was a lot of slipping going on that had us frequently reverting to the unnatural and awkward herring bone method of ascent to gain elevation. We made the lofty, corniced ridge, ate peanut butter sandwiches and M & M's to recoup some calories, then glided back down in large, sweeping telemark turns. My goal lately has been to duplicate that route on snowshoes, and on this day we almost made it.

Part of the problem has been remembering the route; we've had a couple of false starts, three if you count a wrong turn on this trip. But we finally found our way, got to within a short mile of the ridge, before fatigue and a gut ache turned me around. Fourth time's the charm, I always say... 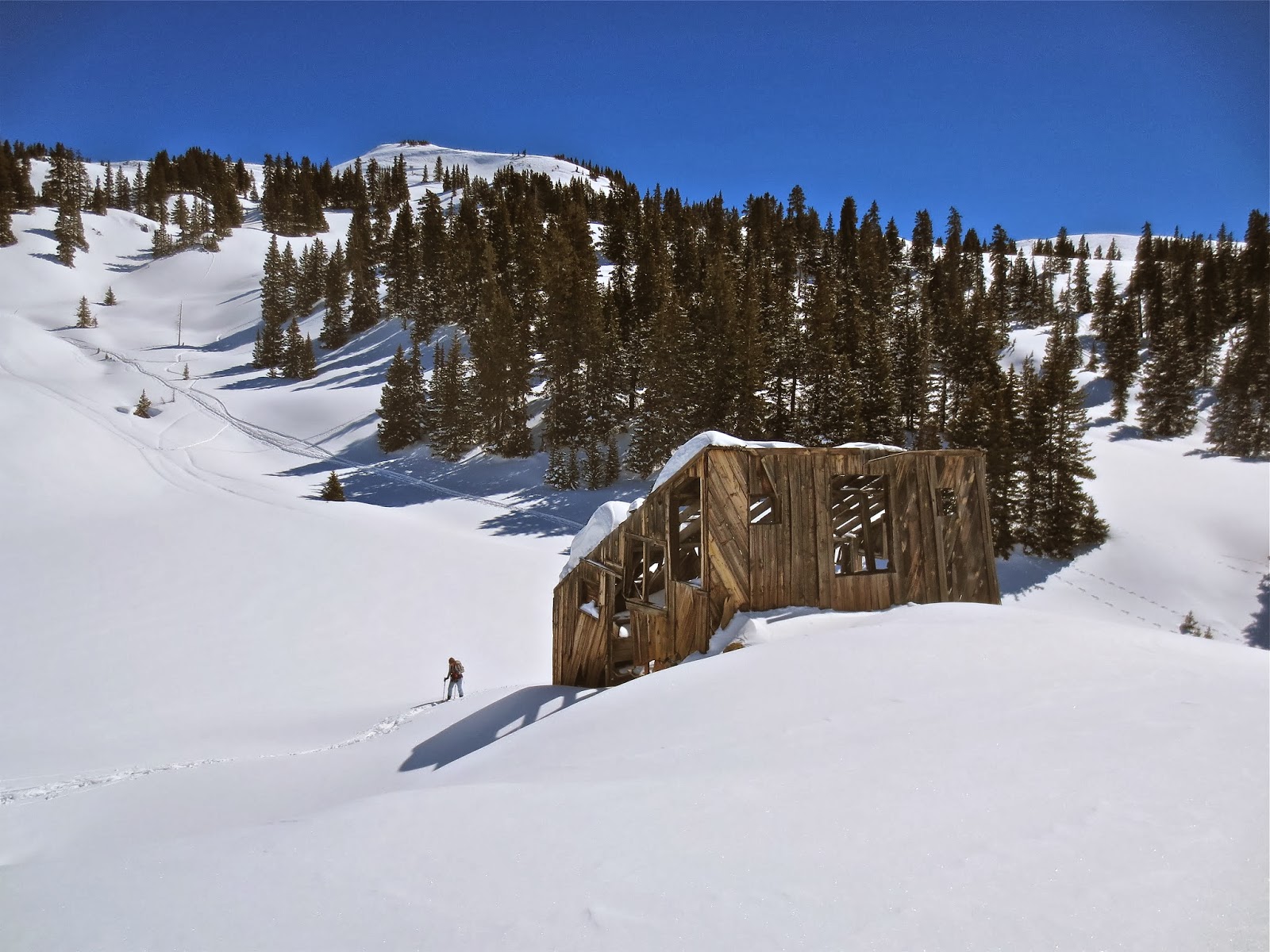 Bobbie snowshoes through a snowbound basin and past an old mine building from yesteryears. We had to take a detour so that I could get in a good position to photograph the rickety relic. It might not be standing the next time we come up. 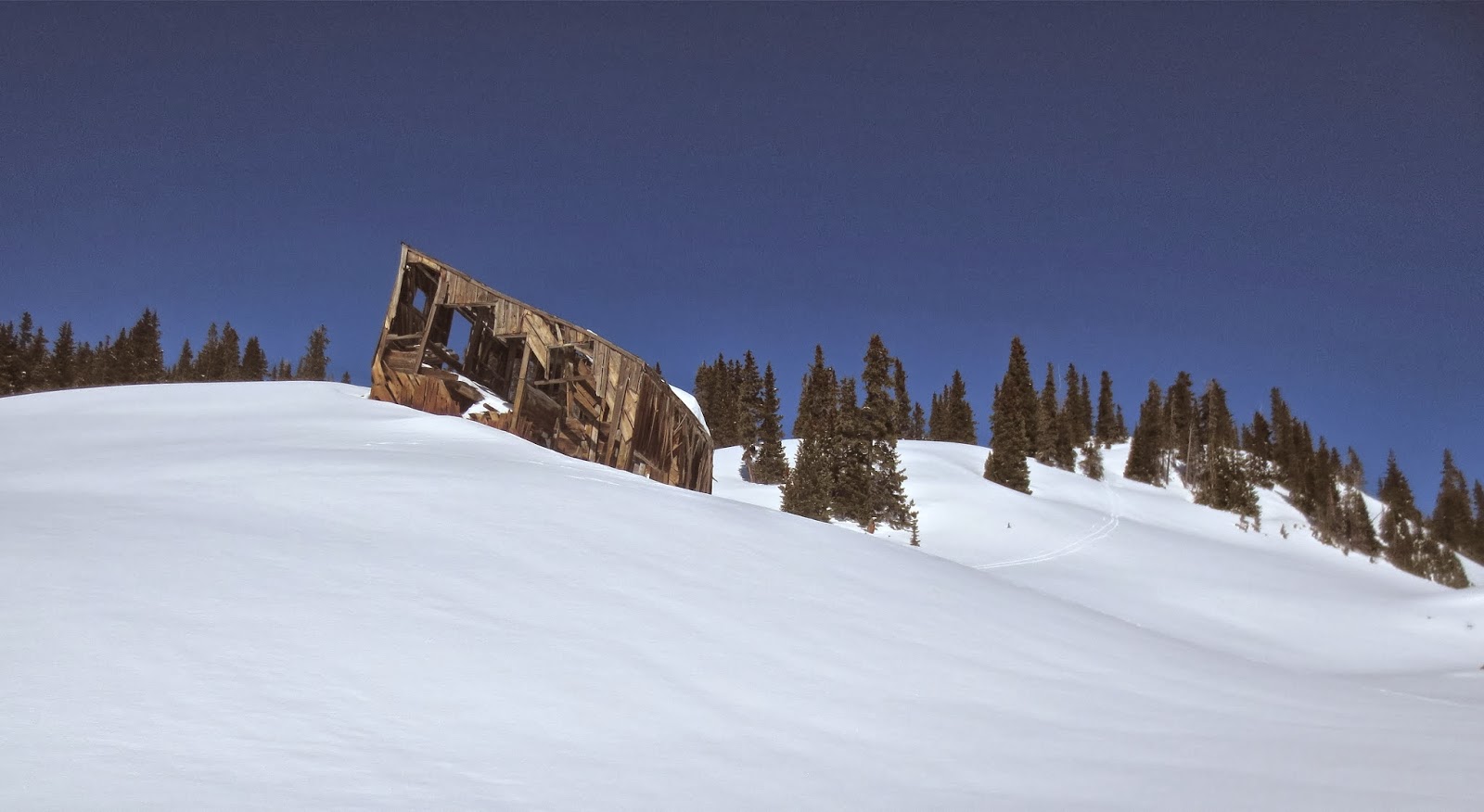 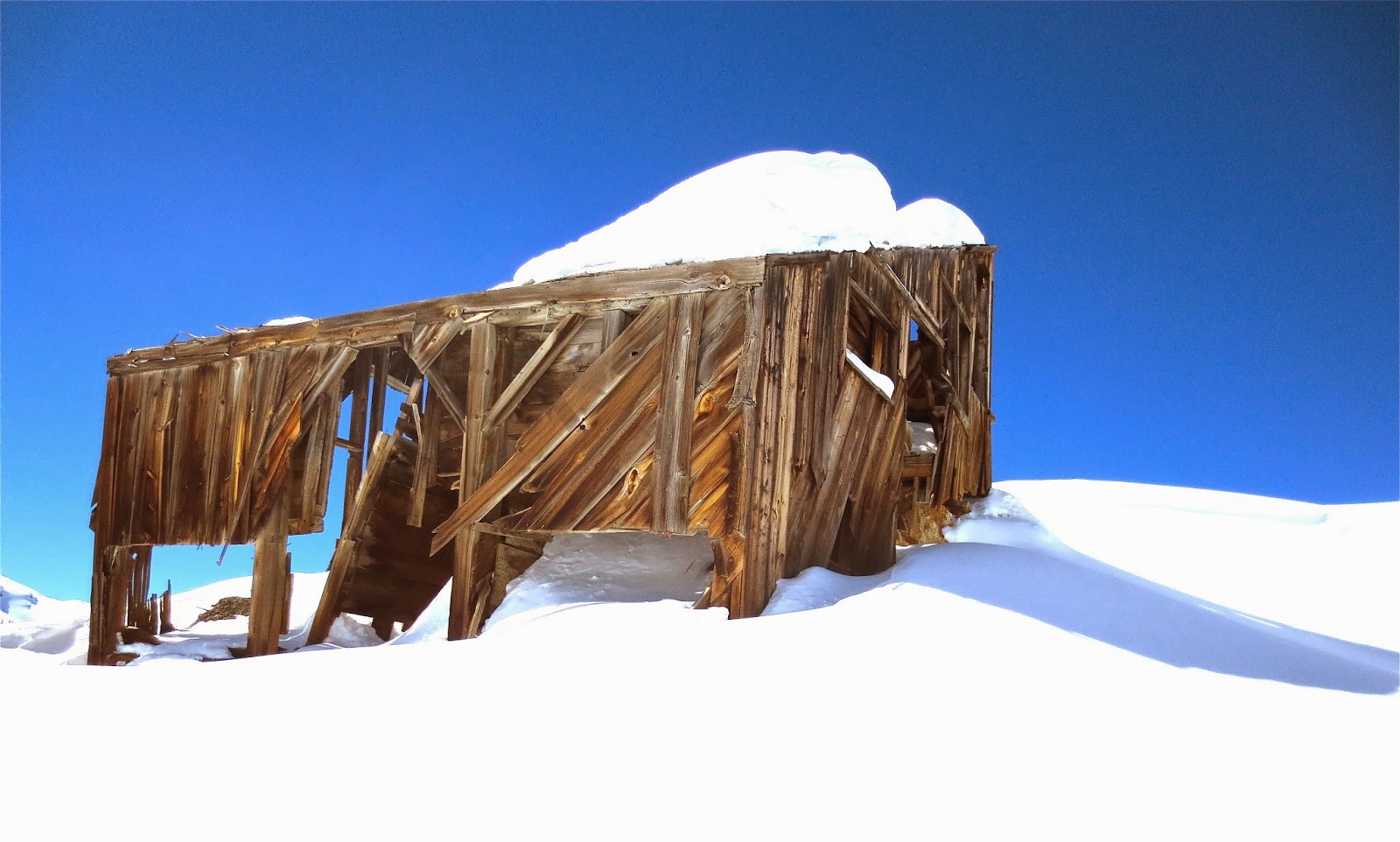 The sun's powerful ultraviolet rays do wonderful things to wood at 12,000 feet. 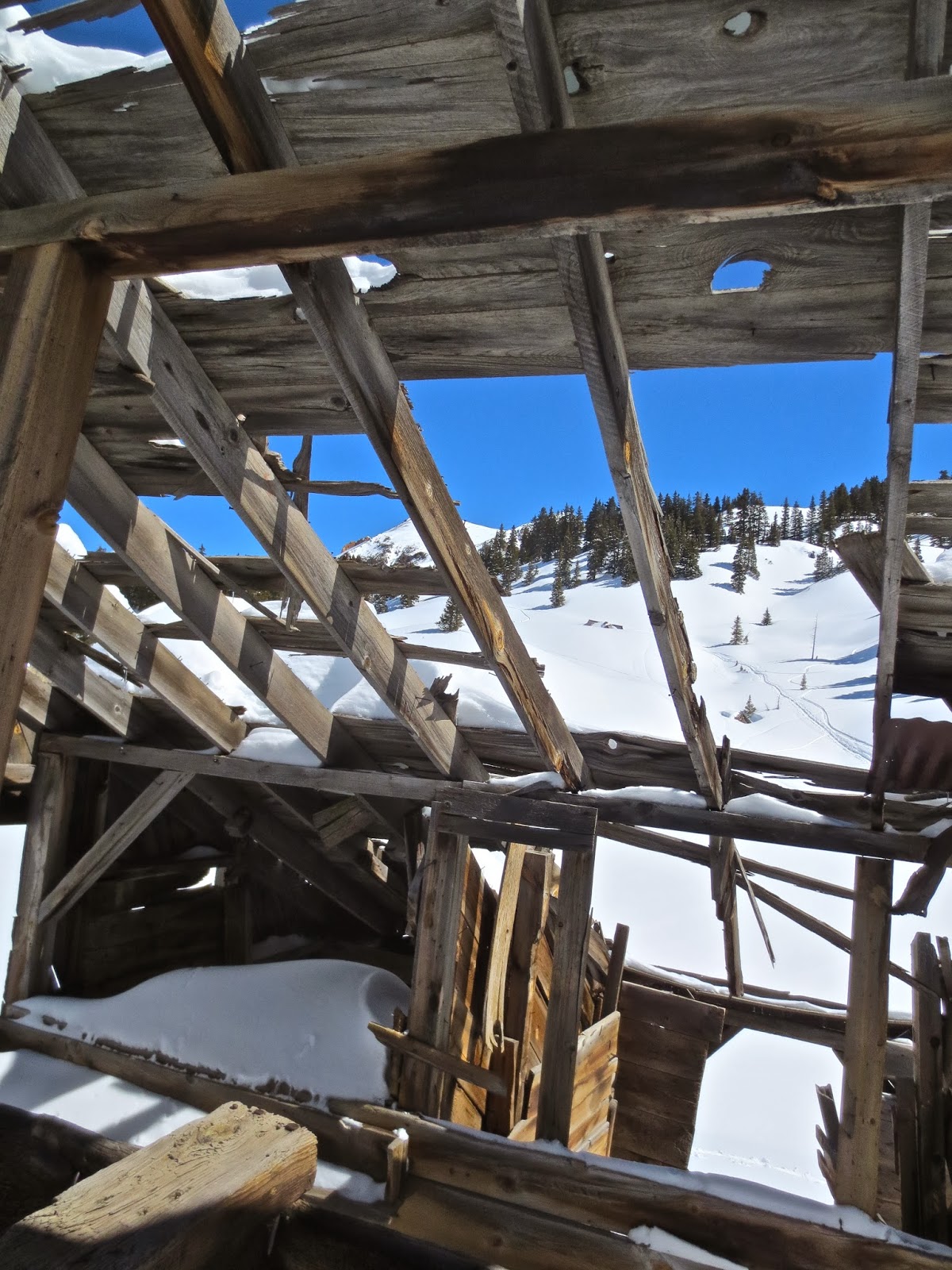 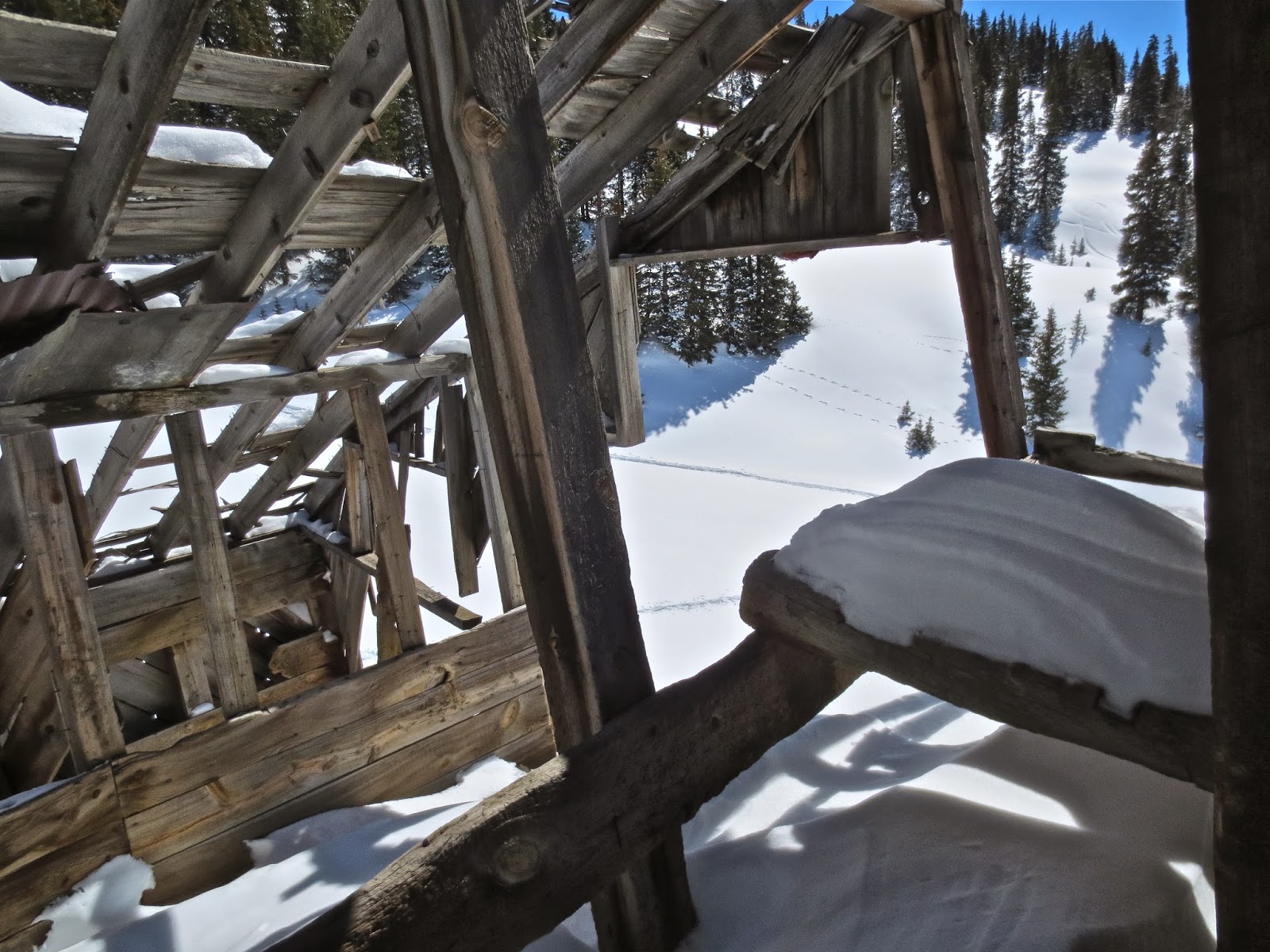 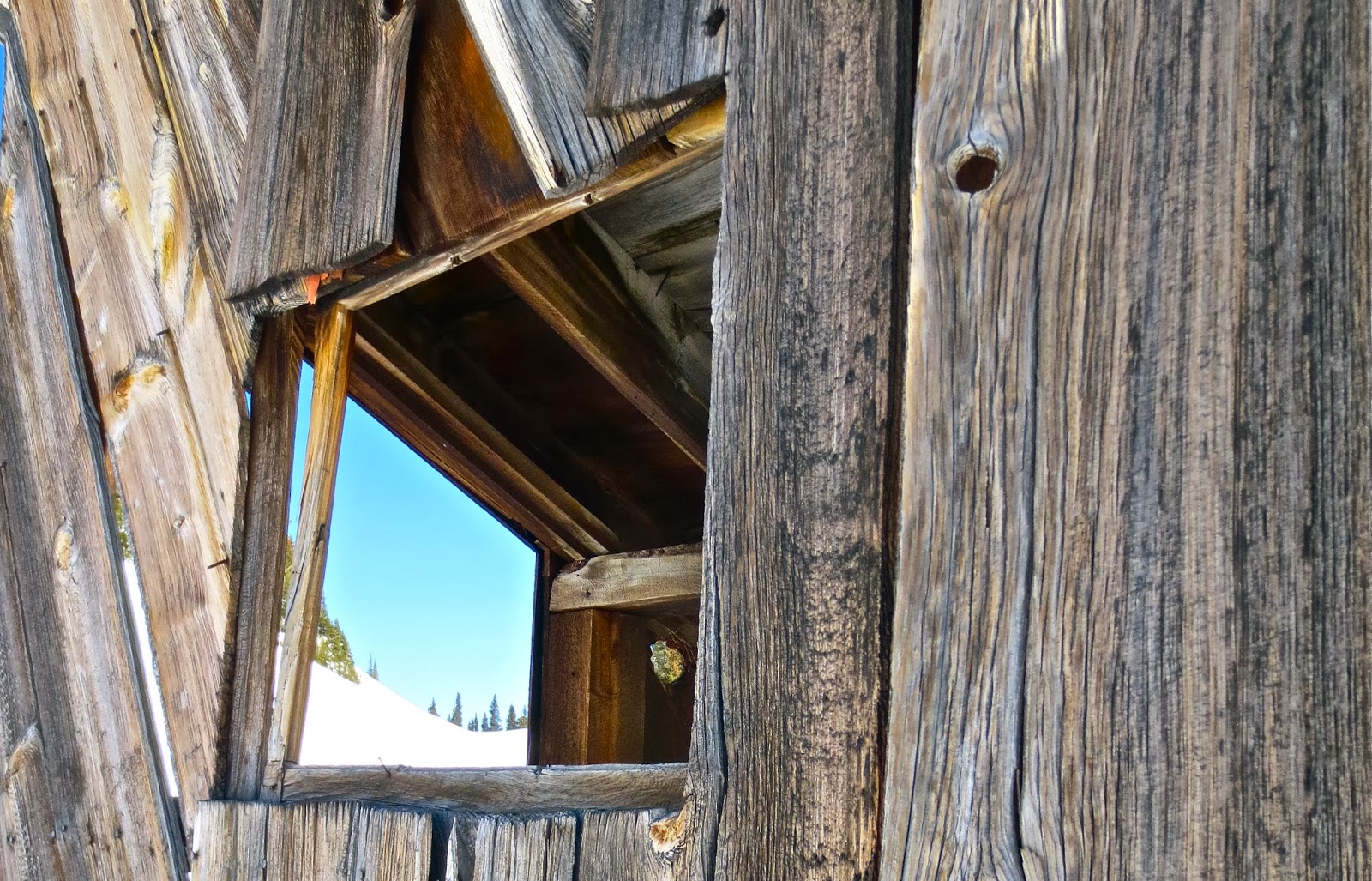 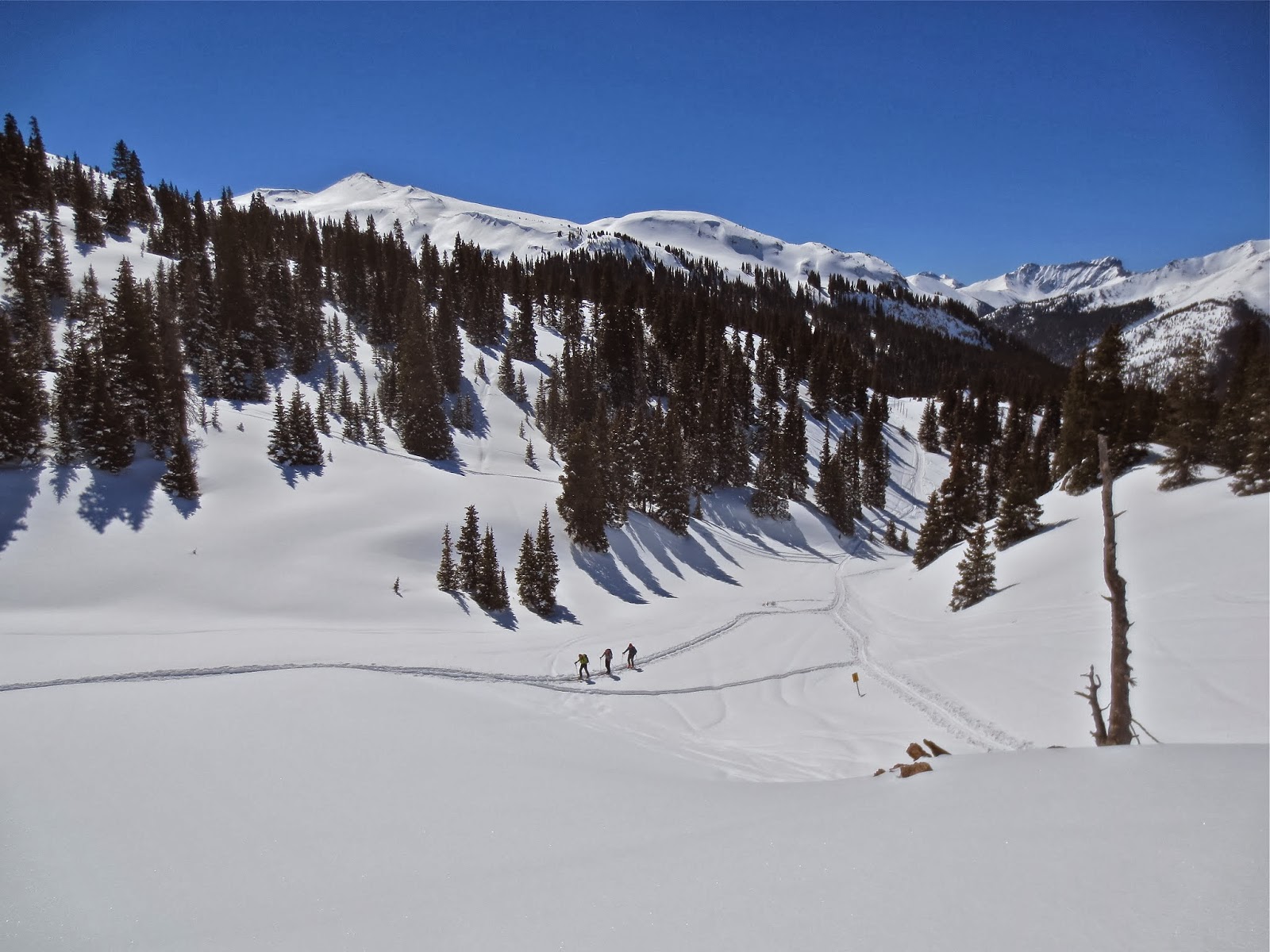 We passed three "senior aged" backcountry skiers on our way up; one guy I guessed to be in his mid seventies. He spends all winter trekking up to high altitude bowls in Colorado and Utah in order to experience the thrill of gliding back down. We, of course, would have to miss that thrill being on snowshoes. I think I see an "investment" coming... 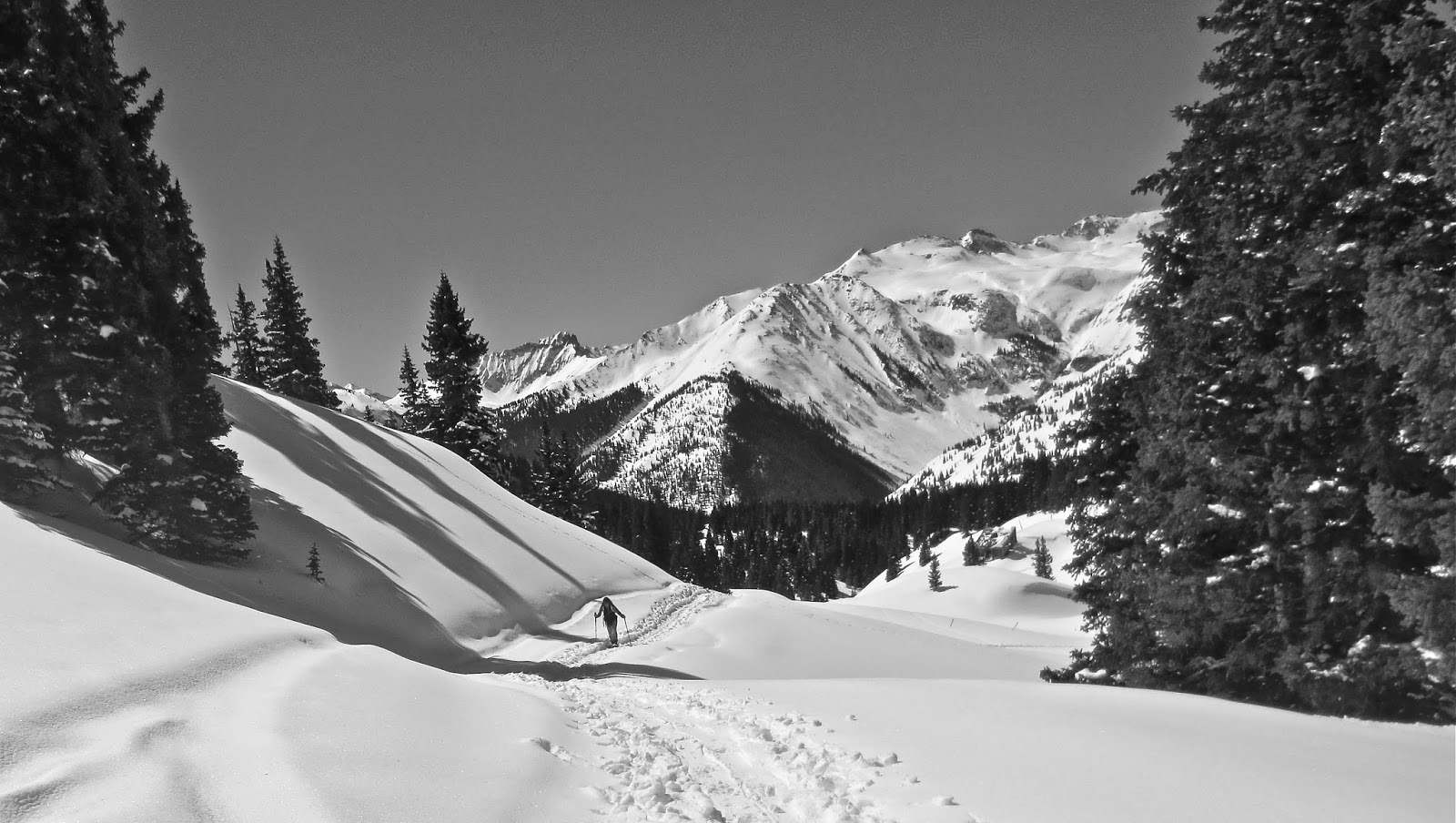 There are no words that I can assemble to describe the feeling of trekking through peak rimmed basins of deep, soft snow—how alone you can be, how quiet the acoustics are, how pure the air your lungs take in, even how warm it can be on days like this. 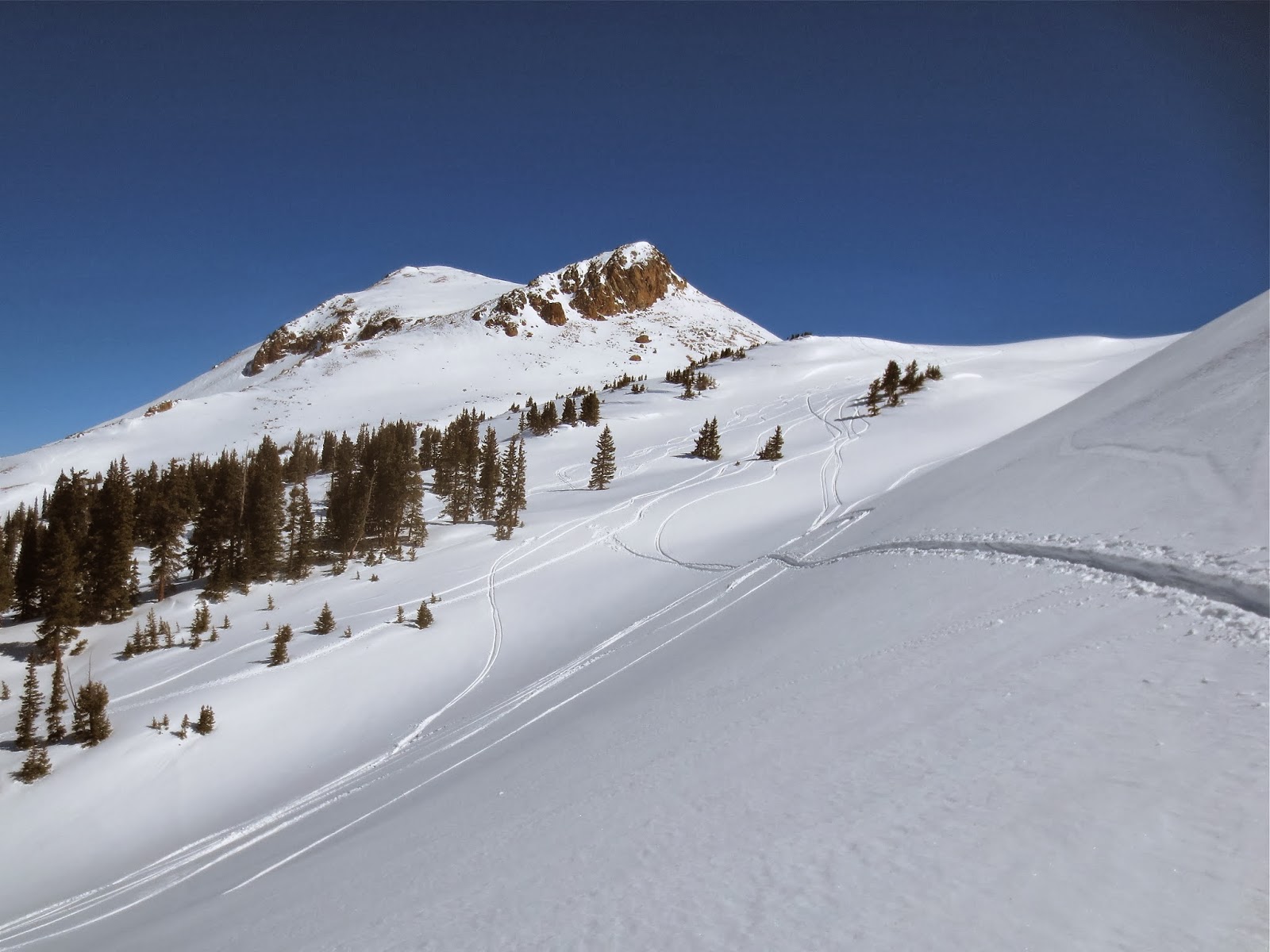 The above route to the ridge was a bust. The photo doesn't show the mountain of snow up and to the right…an avalanche just waiting to be triggered. I was sorely tempted when I saw the tracks where someone else had made it. But skis gives one at least a chance to outrun, or run out of the way of, a snow slide. On Snowshoes you are a sitting duck, and should stick to gentler slopes. 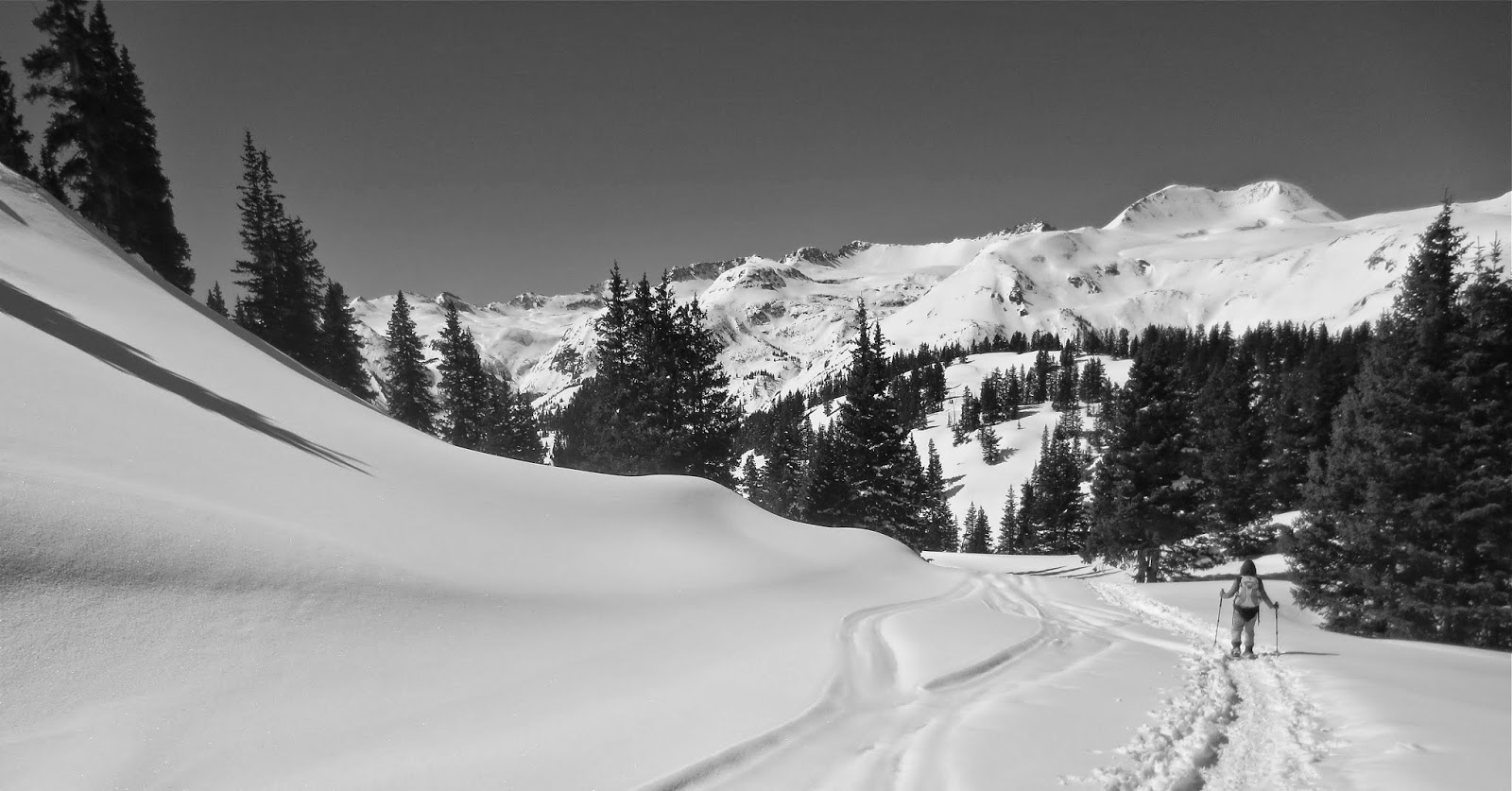 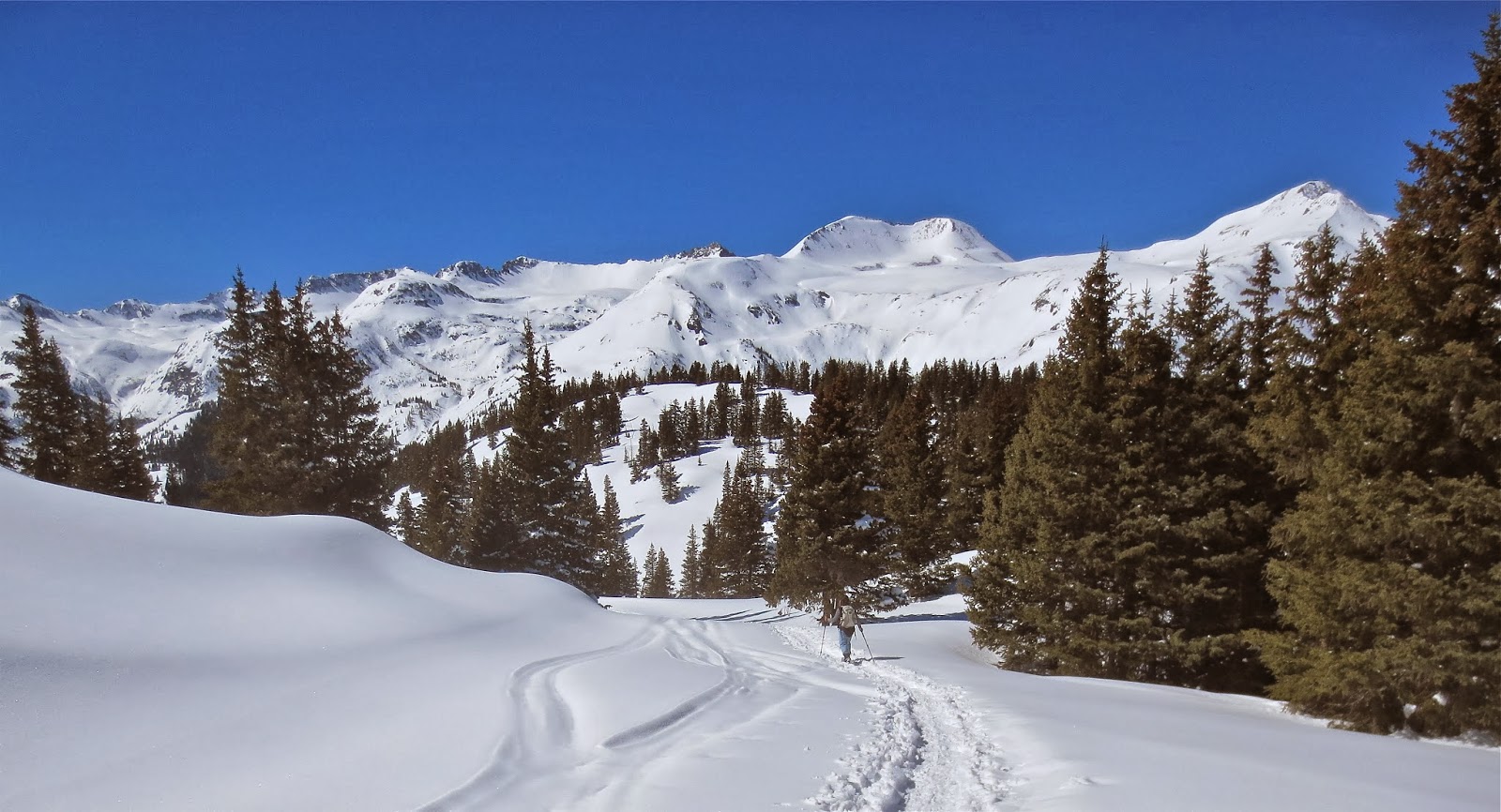 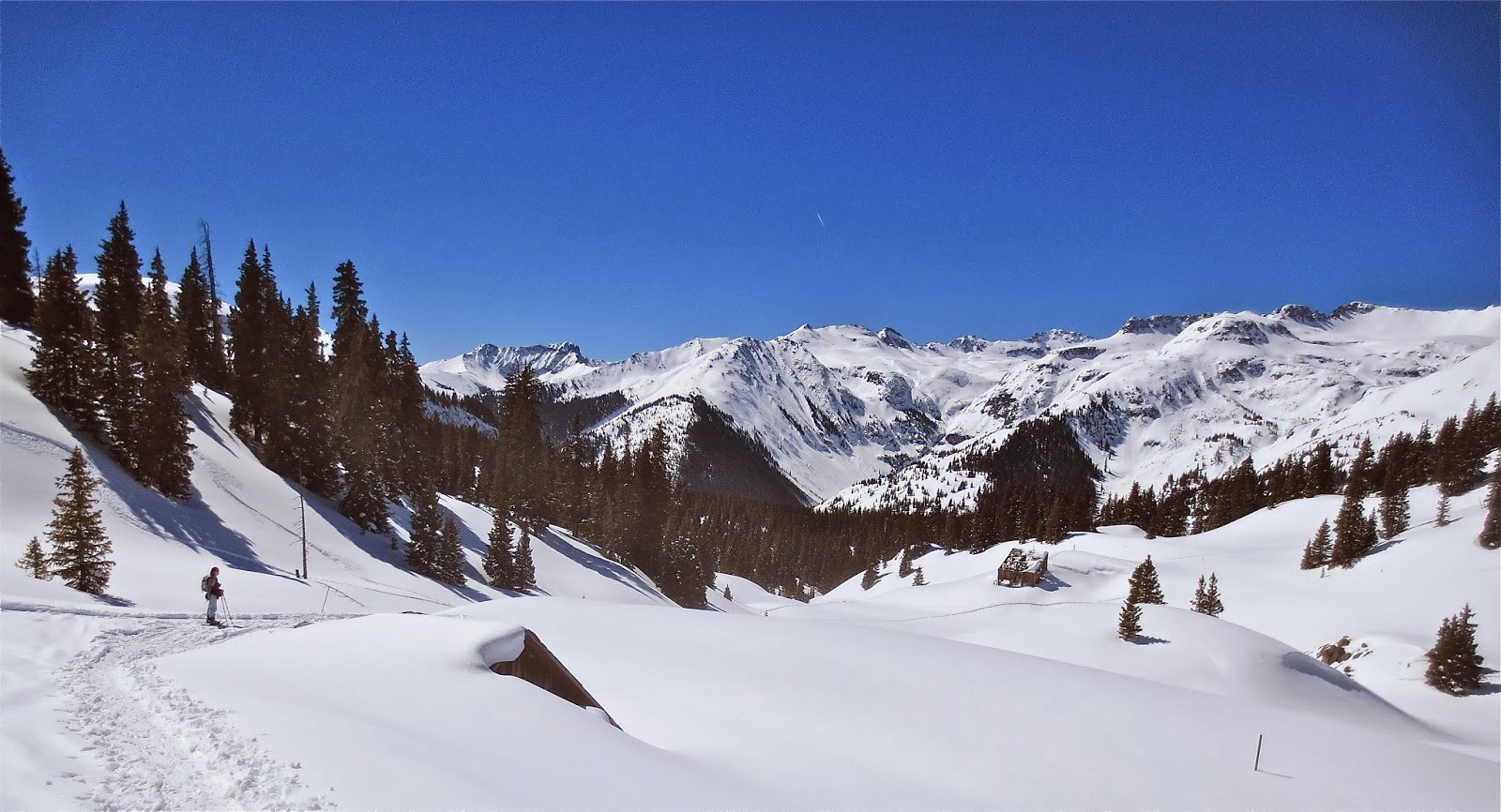 Above you can see the vastness of our basin, and the tip of a roof sticking out of the snow (see lead photo at top for another view.) 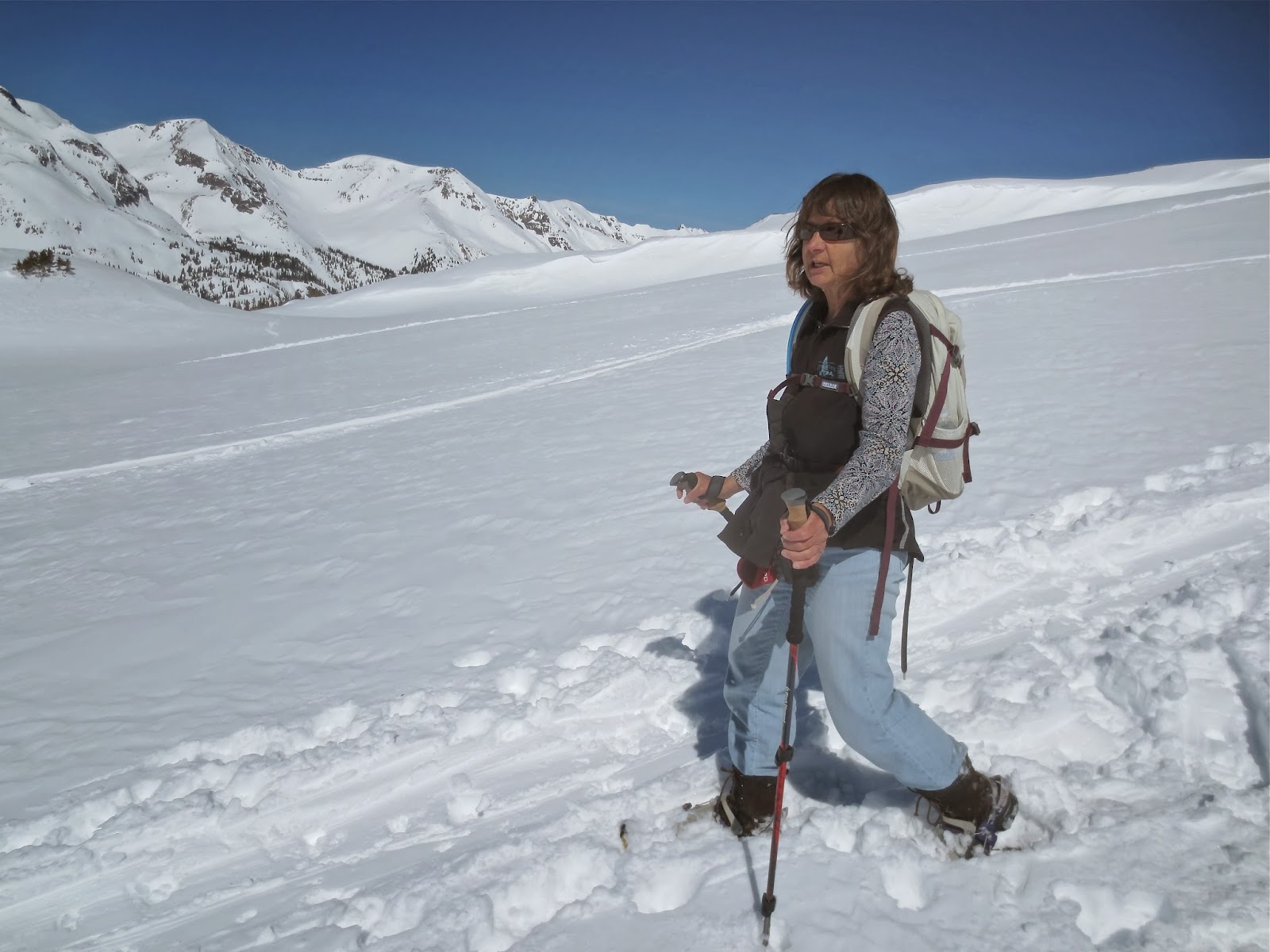 A happy woman in one of her favorite outdoor elements, wearing just a long sleeve t-shirt, blue jeans, and a big smile. 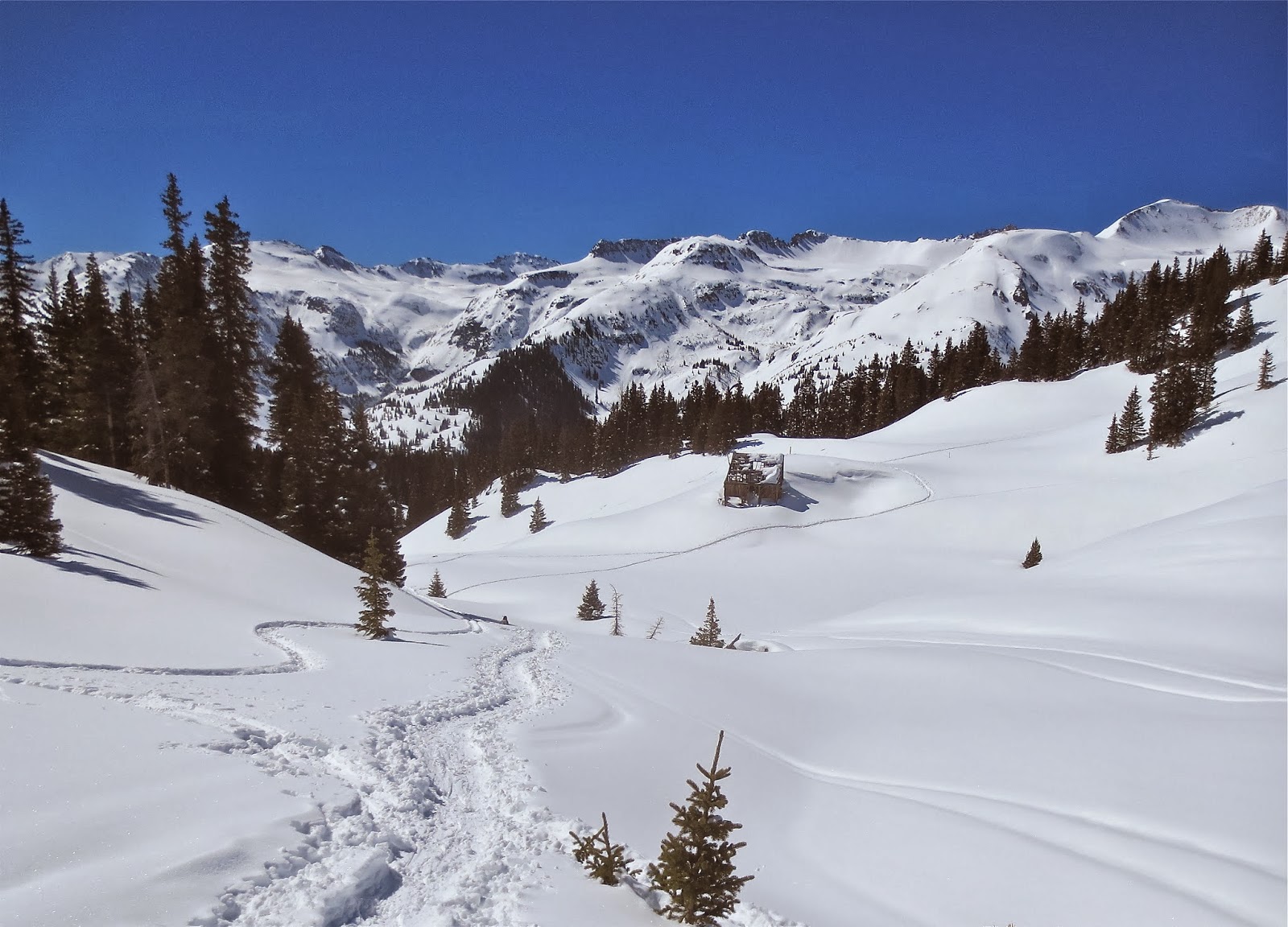 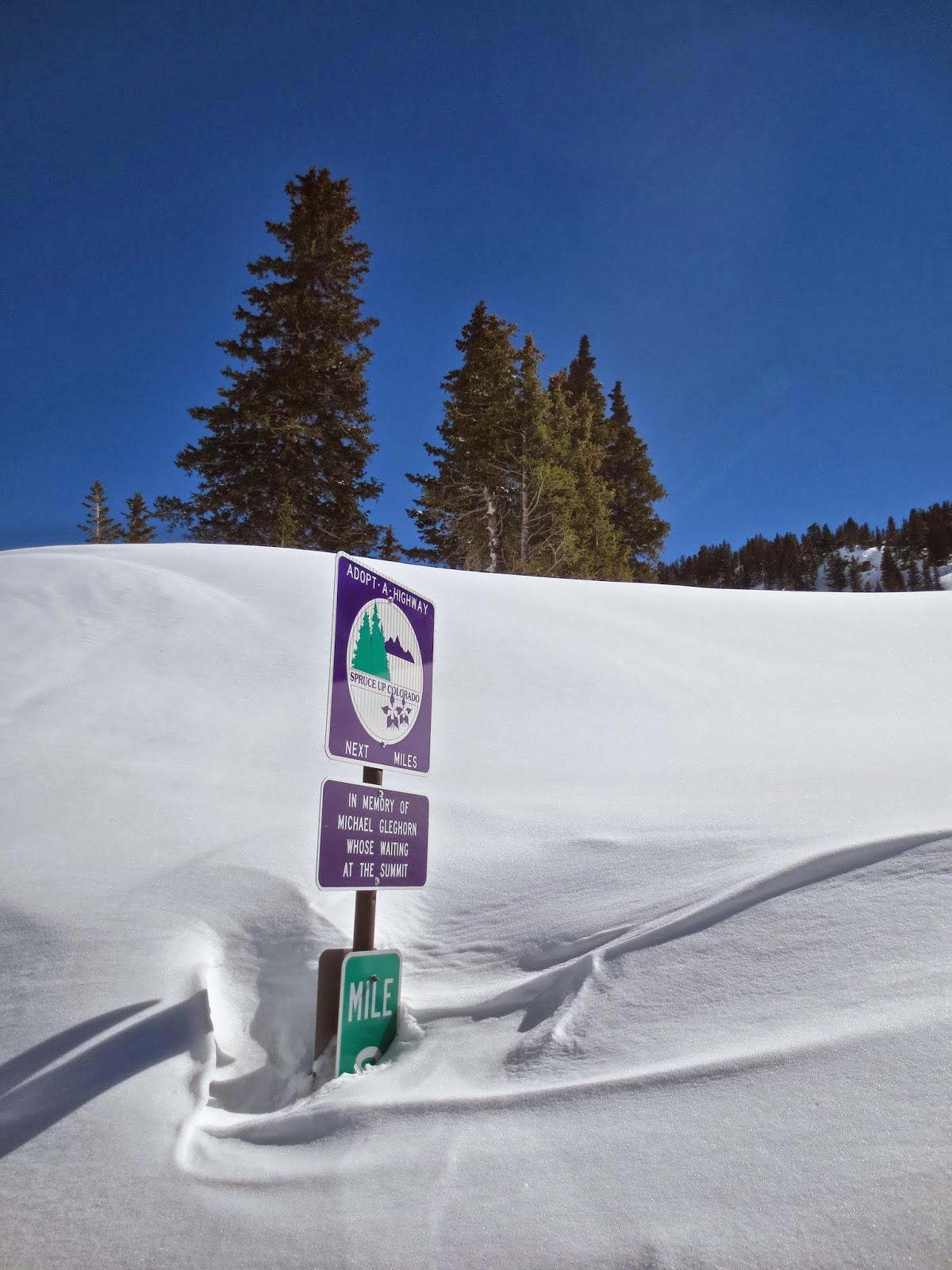 Posted by Box Canyon Blog.com at 8:38 AM