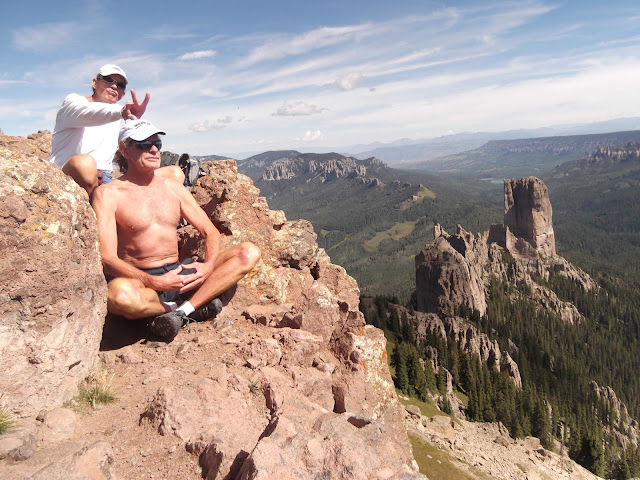 A half naked Marathon Man Leonard strikes a meditative "half lotus" pose on Courthouse Mountain. I have no doubt that but for the pointy rocks (thank you Jesus) he would have gone "full monty," forcing your's truly to leap from the cliff. Being so far removed in wilderness might call for some antenna assistance, and I was happy to oblige..."How about now, Leon, feeling anything?"


I kept my shirt on in order to preserve the BCB's PG rating...which clearly states, "All Boobies Must Be Covered At All Times!" Recall that you already saw my ass last year up in that hot springs canyon in northwest Arid-zona; I lost a lot of right-wing conservative readers over that debacle.

Skinny old Leon has yet to mature into his man-boobs, so I thought I could get away with his indecent exposure. Either he ain't drinking enough beer, or else he's overtraining. Somethings got to give, Marathon Man. People like you living to be a hundred plus is going to bankrupt Govie!

I know, I know...we just climbed Courthouse a few weeks ago. But Leon had yet to summit Her Majesty so we repeated the trek. I thought the 2000 vertical feet gain over 1.8 miles was going to kill him tho. It turns out he road a Half Century on his bike the day before. You know better, you know you need to come "fresh" when you go hiking with us! Served him right that we broke our previous record ascent time by ten minutes :) Maybe it's a good thing that Glenn of "To Simplify" was nursing an injury and begged off. Next time, no excuses :) 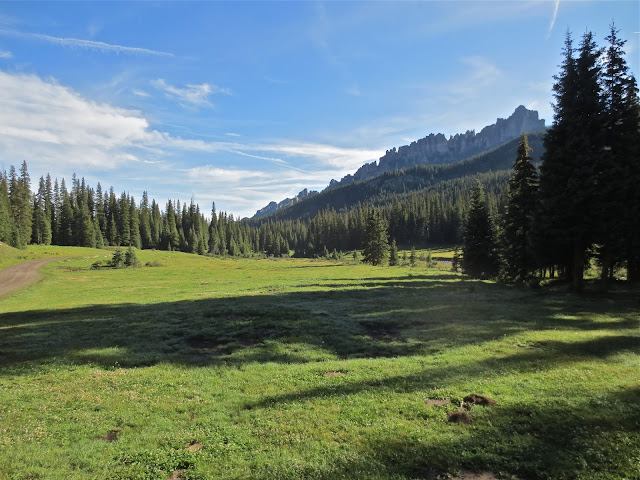 The Courthouse Trailhead is just up and over the aspen/glades on Owl Creek Pass if you are coming from the Ridgway side. Hang the first right on a "lesser" road, which puts you on the west fork of the Little Cimmaron River. I'd say it's about two miles to the trailhead, but it's in the shadows so keep a close eye.

This is a green and lush place to boondock...it will even accommodate motorhomes for a good ways up the Lil' Cimmaron. Good waterproof shoes or a Jeep will get you a couple more miles up to a dead end where the trail to Wetterhorn Basin takes off. Above timberline keep an eye out for Big Horn Sheep...you'll hear them kicking off rocks from shear cliff faces, walking around on narrow ledges like a circus act.

It was good to see Chimney Rock again. I never tire of its many moods, different light and sky backdrop. After all that work, a couple from Russellville, Arkansauce freaked out just 15 minutes short of the summit and turned around. We caught them on the way down and I asked him what happened. There's one little stretch were you need to use all fours and "climb," and they thought enough was enough.

You don't have to worry about falling tho...so just relax and follow the butts of Leon and Bobbie to the top of a mountain with 360 degrees of postcard views from the top. 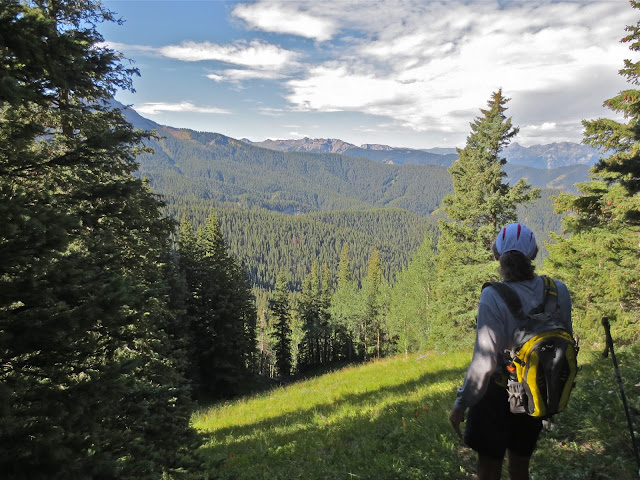 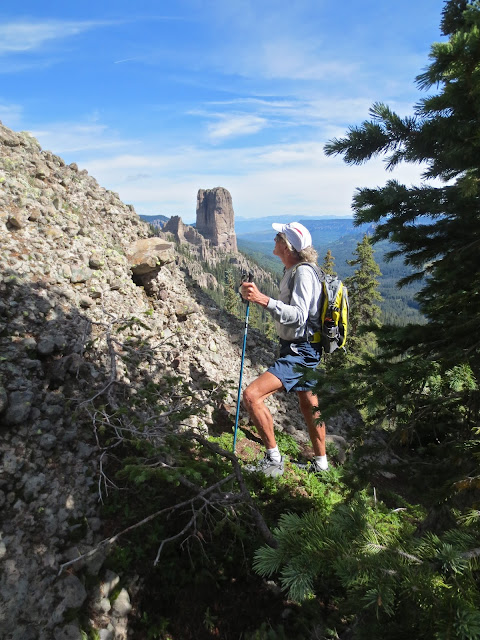 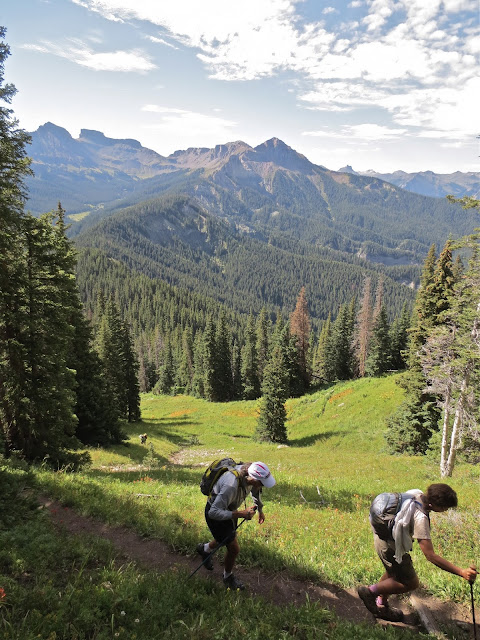 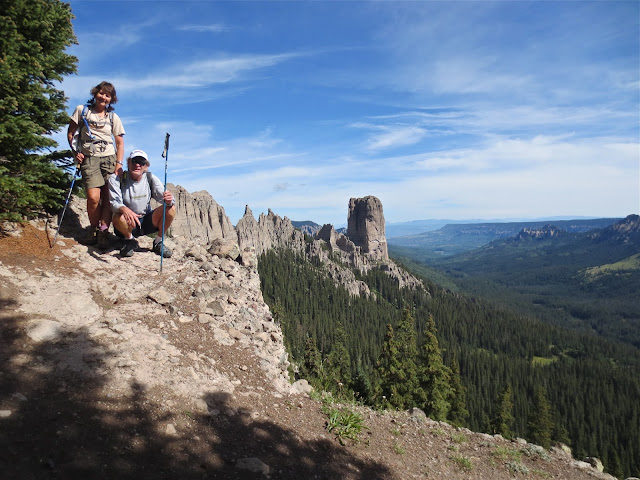 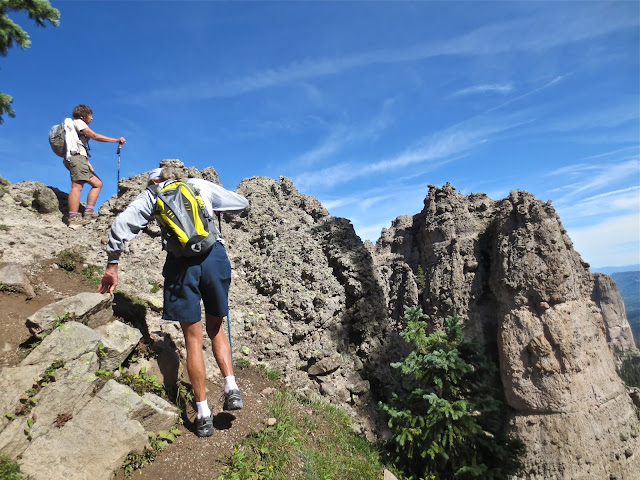 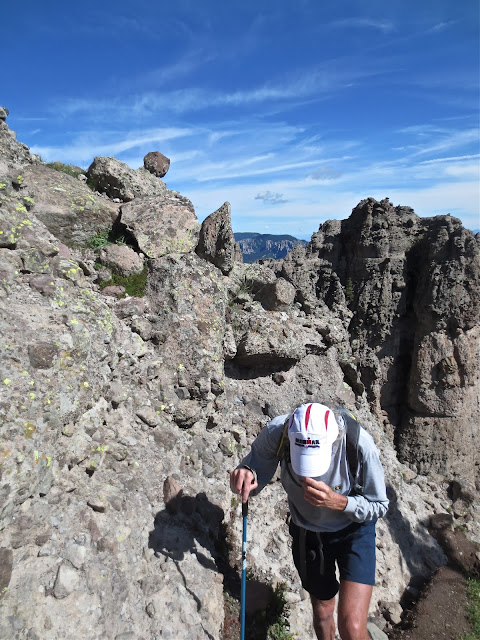 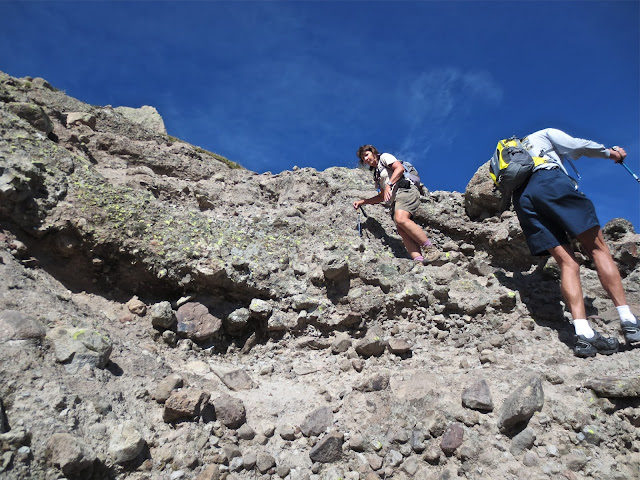 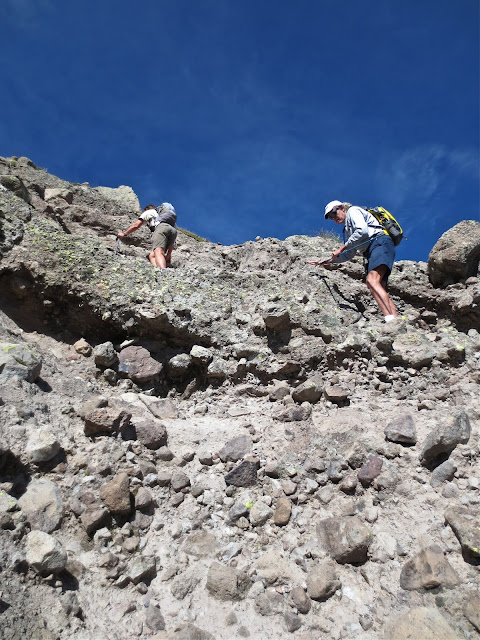 Only a short stretch of "climbing" required... 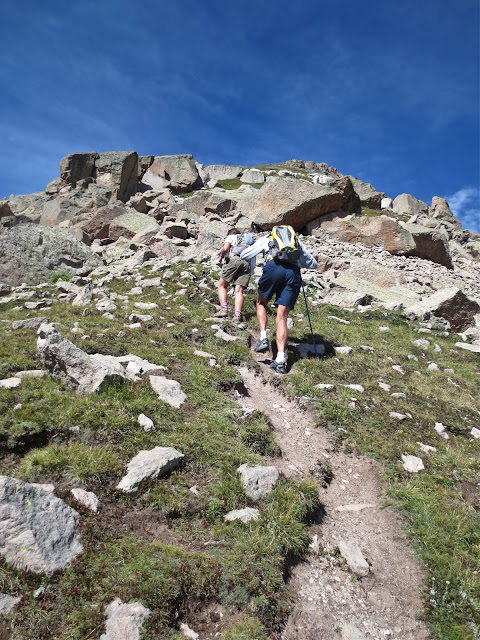 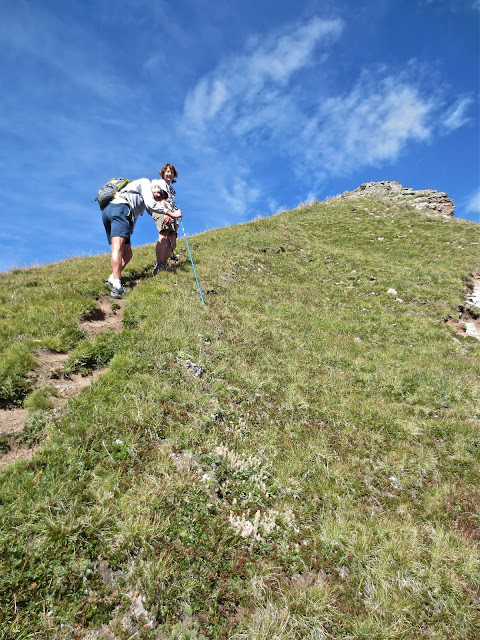 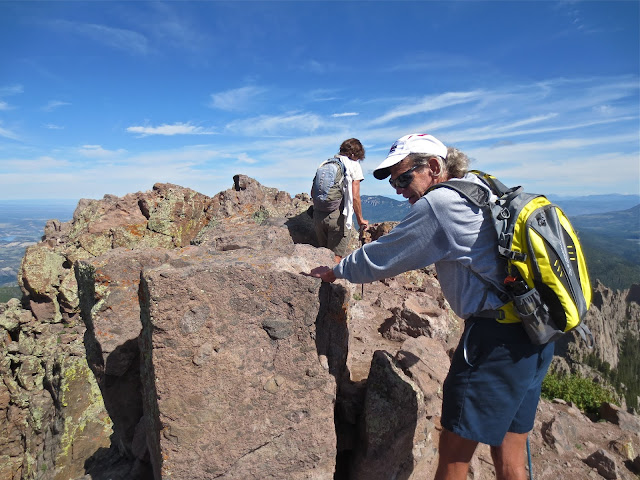 Marathon Man thought that summit boulder looked tired... so he steadied it for a while :)) 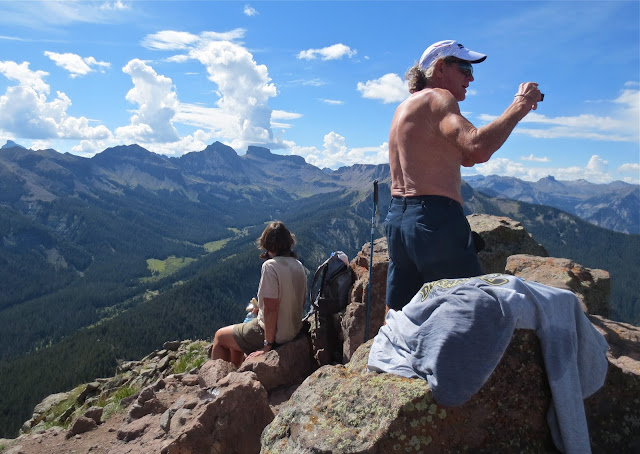 Then he started getting naked... 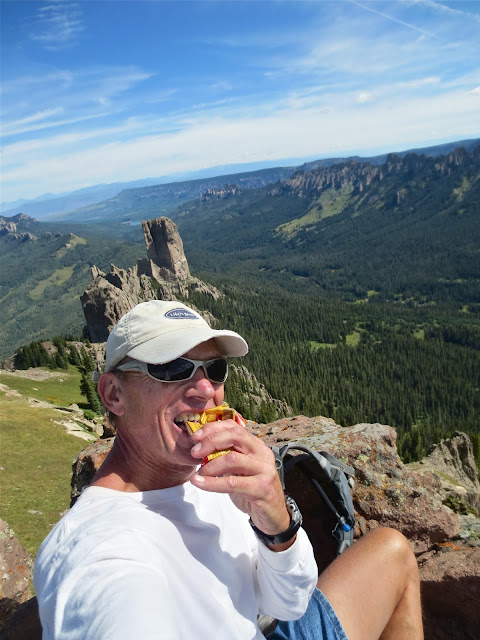 I love a summit picnic! 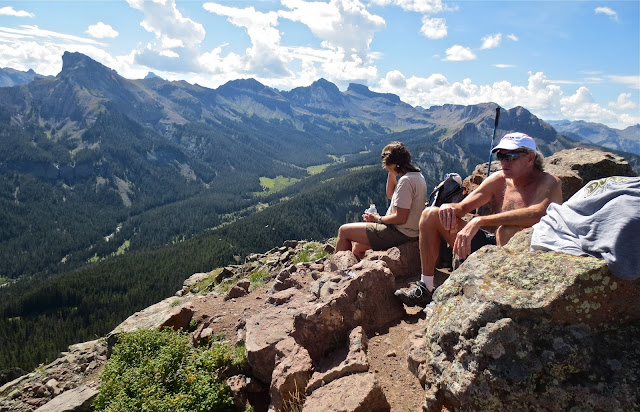 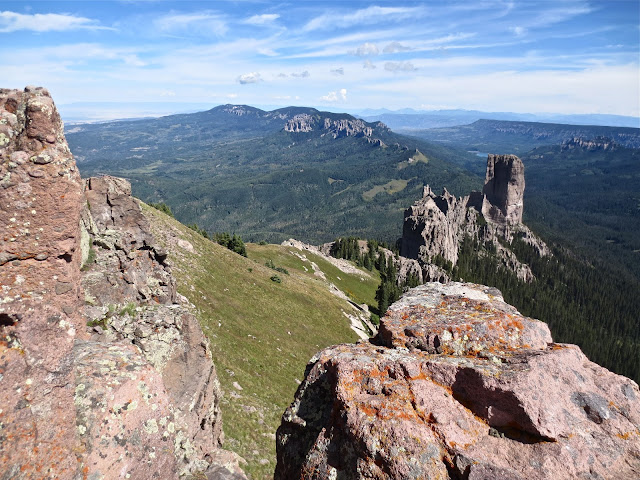 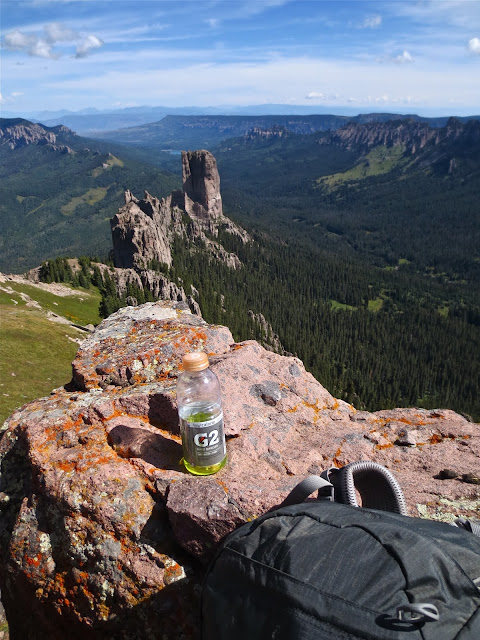 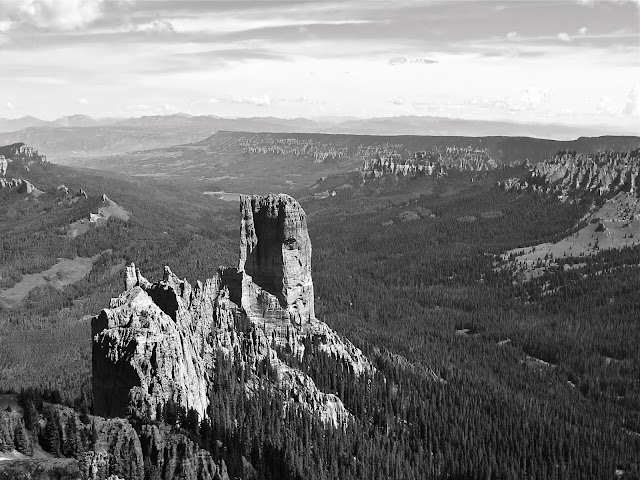 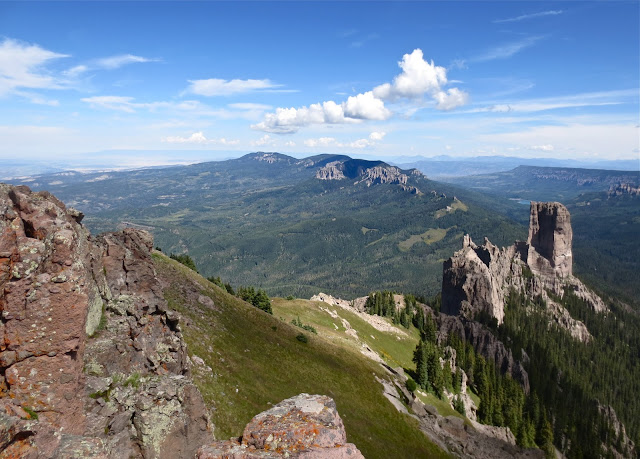 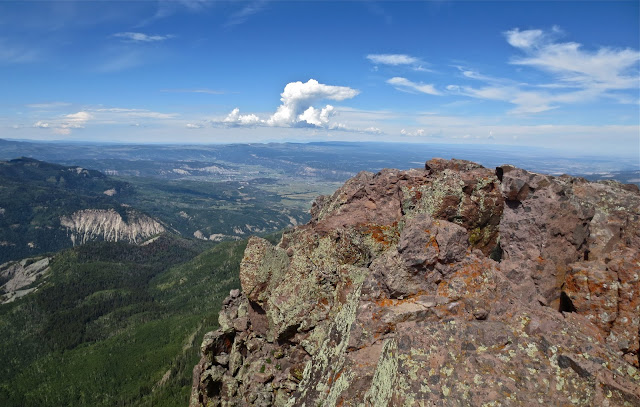 Looking northwest to the Uncompahgre (Un-come-pa-gray) Plateau and Grand Mesa...both 10,000 feet high tho it doesn't show from Courthouse. 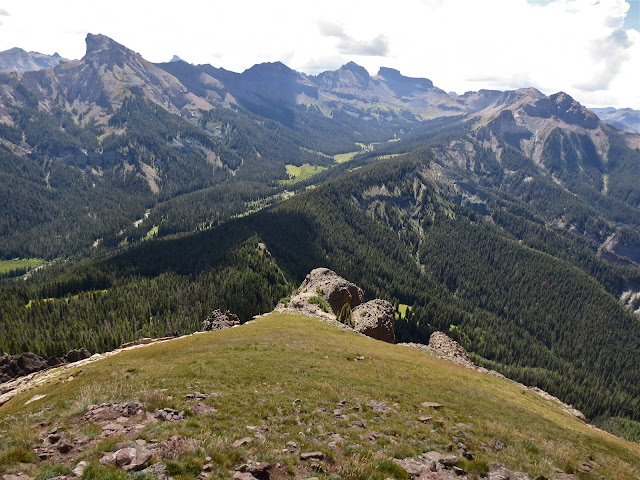 On the distant ridge, left to right: Precipice, Dunsanane, No Name, Redcliff, and Cox Comb peaks. Been up  a few. Boonie, notice the gentle Lil' Cimmaron valley. You could boondock and bike the west fork road...then hike to Wetterhorn Basin! 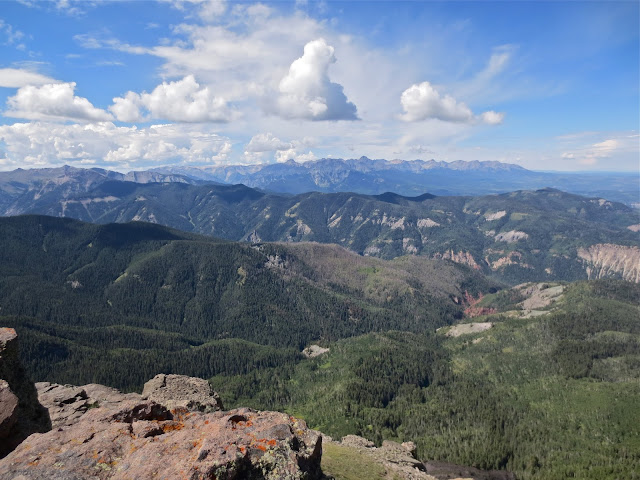 14,000 foot Mount Sneffels is the highpoint "tit" in the distance...just 8 or nine miles above Lovely Ouray. Last call to climb that one as the snow will start blowing in September! 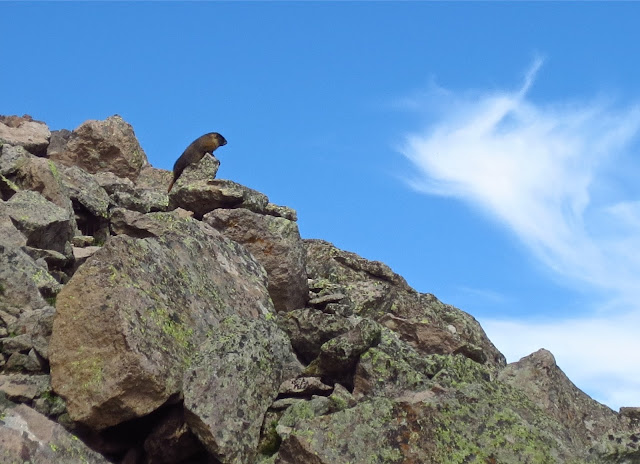 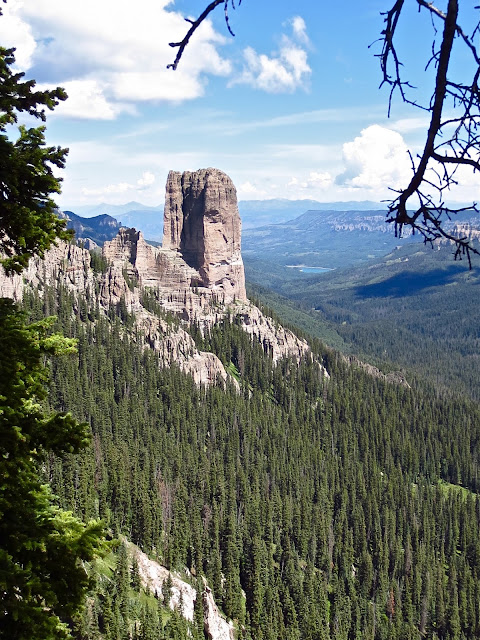 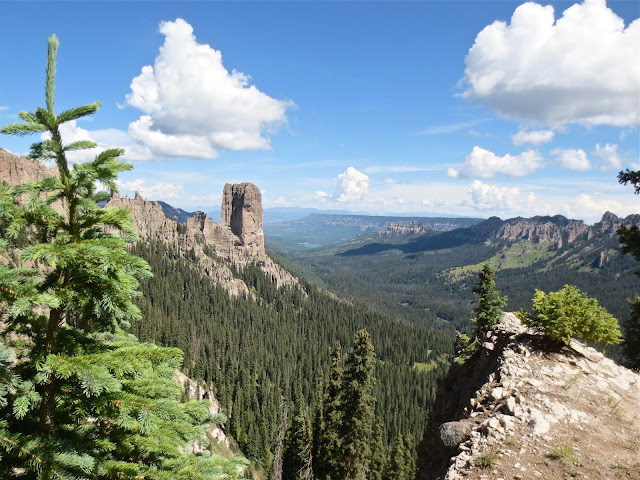 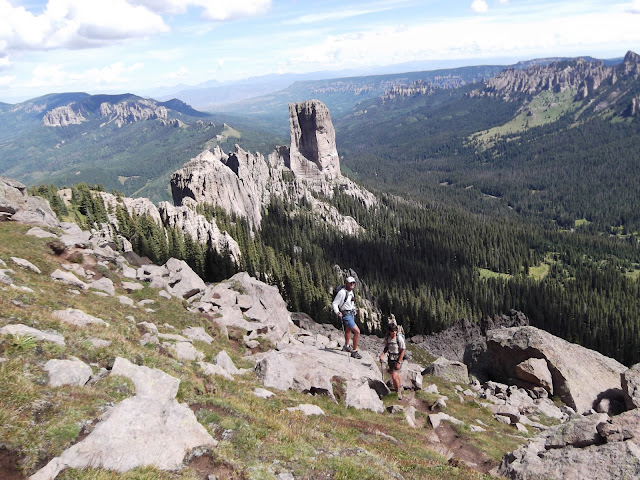 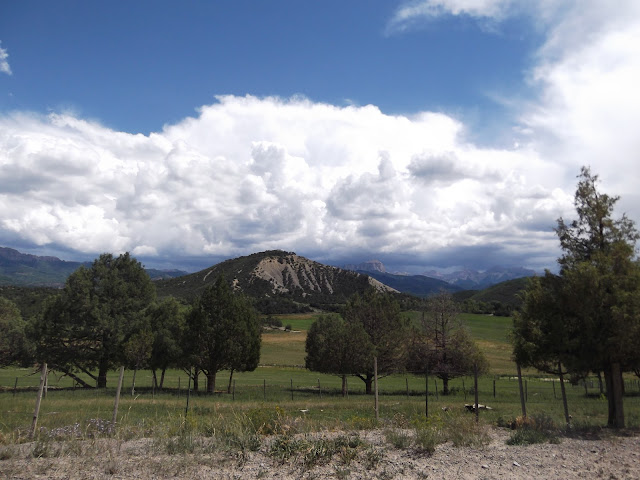 Courthouse is to the right of center, way way back and touching the clouds. We got off just in time! Glenn showed up for BBQ and Beer...really good beer... and we shot the bull dead! A great day with good people.

Peace out!
Mark
Posted by Box Canyon Blog.com at 1:54 PM