Project "Storage Box," and Some Solar Input Needed From Readers 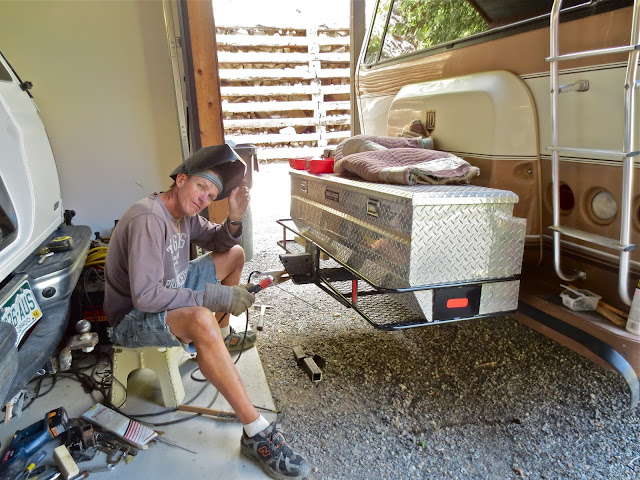 Glory to the gods of Treadmills, Anchors and Short Leashes, for they have taken pity on an unrepentant, poorboy-of-a-wanderer. My summer "sentence" at the Skol Fine Art Gallery has been officially commuted, so pardon me while I unleash some well earned exuberance! And what clever irony, that Labor Day will be the finale. To quote Dr King, "Free at last, Free at last, Thank God almighty we are free at last."

My mind long-jumps to future boondocks—October nights, camped under the Milky Way at the bleeding mouths of enumerable slot canyons. Utah's red rock and the San Rafael Swell beckons. The "Now" can't compete with "tomorrow," suddenly it seems boring and overrated. Good as it is, "what is" can't compete with "what might be;" never could. Ah, spoken like a true dreamer.


Egads, man, there is work to be done! But why, my fellow road warriors, is there no toil and drudgery in prepping for The Road? I'll be trading my Polo pinstripes for bluejeans and backroads, and embarking on a six month parole. It never gets old. It is never hard. I can only liken it to the simple-pleasure joy of going into a supermarket for the first time after eight long weeks of bootcamp chow. I'm a little like Bayfield Al in that, with the first subtle tinge of Autumn there comes an uptick in spirit and optimism.

Upon the news of my early release, Bobbie moved her official last day up a couple of weeks. Then we made a mad dash to rescue Goldie from her RV kennel, a cruel chain-link fenced area below the dam at Ridgway State Park. There she was, sleeping like a puppy. She awakened to a key turn in the ignition, happy to be moving again. It's off to the "beauty shop" for some put offed projects. Last winter's travels demonstrated that Goldie needed (apologies to Mr Simplicity, Glenn) more storage, not to mention (gulp) solar energy. It's not that we want or need to take more "stuff" with us, just more that we need a place to put the stuff we have. Last winter our inflatable Sea Eagle Kayak rode shotgun in the passenger seat the entire trip, and our Honda generator took up most of the entryway inside the cabin door. I've had it with generator dependence; we are going unplugged this time, tho I will take it along in the newly completed storage box...you know, in case our boondock has a mountain or trees or clouds blocking old Sol.

So it's a good thing I built storage shelves around the perimeter of the garage ceiling this spring and got all our shit sorted out.  I was able to find all my tools that went missing in the pile of boxes and tubs that laid in the middle of the garage floor for the past two years. Is there anything more lost and pathetic than a man without his tools? I found my drill press, my oxy/acet. torches, my grinders, my plasma cutter, my wire-feed welder, and Big Abe, my Lincoln dims-the-lights 220 amp welder...a hot rod in your hand if there ever was one. It magically glues metal to metal, and I am quite proud of Goldie's new storage box/bike rack.

But before I show you the solution to our storage problem, I want to reach out for your opinions on the, as of yet, unordered solar installation about to get underway. To make sure of placement and room, I made a cardboard template measuring ever so slightly larger than the each of the two 150 watt panels I would prefer to use (as opposed to three 100 watt panels). Here are the placement options I came up with...

Remember, I need two panels the size of the template (I only had one template to test possible locations). By photo number, I'd like to know where you think the best possible 2 locations would be, all things considered? Hurry, cause I want to get the panels and hardware ordered ASAP! Any reason to go with 3 100 watt panels instead of 2 150's?

Now for the "Project Storage Box" I added to Goldie's backside. I had no receiver hitch on the rear so that was the first order of business. I bought one at Murdock's Farm Supply and tacked it into place with four spot welds...just in case it had to be moved for some unforeseen reason.


I ordered a "receiver style" 500 lbs cargo carrier from Ehitch.com for around a $145 dollars. Of course it had to be drastically modified to fit my vision (what doesn't). I wanted the cargo rack as close to Goldie's backend as possible...not sticking way out in traffic, which is the way it came. So I re-drilled another hitch-pin hole that allowed the cargo holders main shaft to slide six inches  further into the receiver and nearer the bumper.

I then robbed the 60 inch aluminum storage box out of my pickup truck and attempted to put in the 60 inch cargo rack... that was in reality, only 59.9 inches. Oh shit...here we go. That's when I noticed the cargo rack's rounded corners. That doesn't work well with a square cornered box. Damn it! Somehow, with Bobbies help and the will of God, we managed to squeeze that box into the carrier. Ok, but it sitting right in the middle of the carrier instead of snugged up to Goldie. Hmmm.

But that's why God made Sawzalls. With four cuts to the corners (two on each side) I was able to slot-notch the corners of the toolbox enough to accept the round cargo carrier. So far, So good. 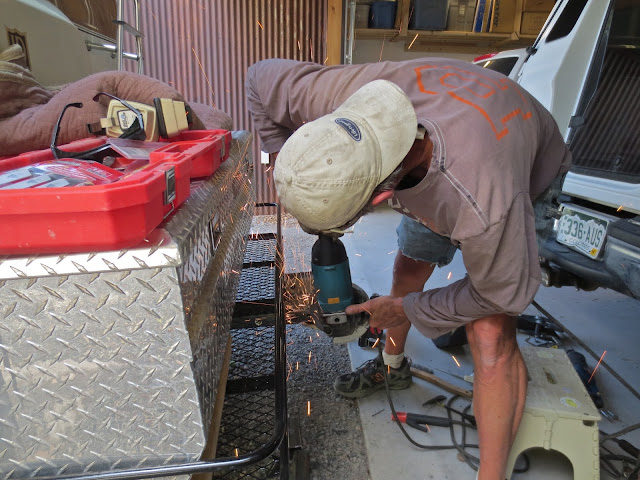 Now for the bike rack. Remember how I had moved the cargo basket six inches closer to Goldie? Well, that left six inches of support shaft still hanging out of the other side. I just needed to find a way to attach our existing bike rack to that 2" shaft. I measured where the bike rack bolted to it's former support shaft and, yep, it was 2". 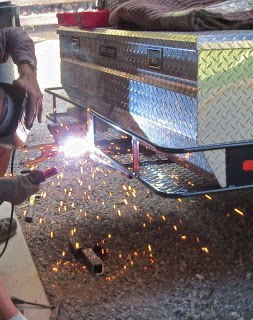 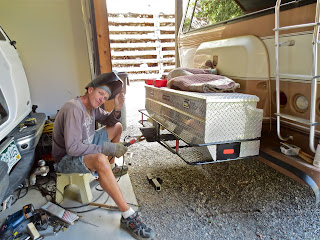 Goooollllleeee. I could just drill new bolt holes and be done! But closer inspection revealed that the bikes would be hanging too low for comfort. Rats! I found some spare 2" tubing, cut three six inch sections, and stacked them on top of each other. Perfect...welder please. 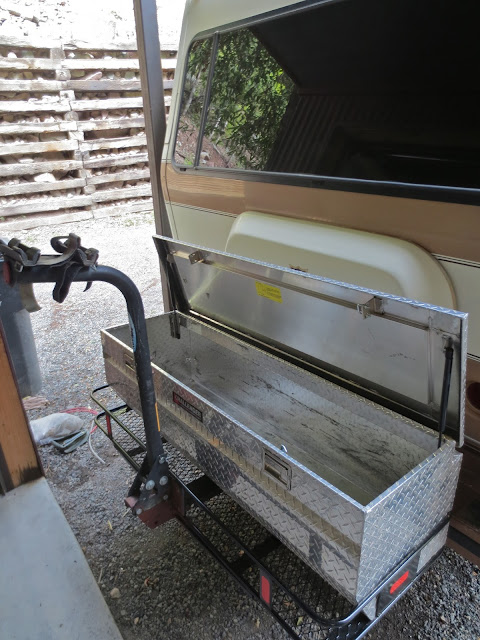 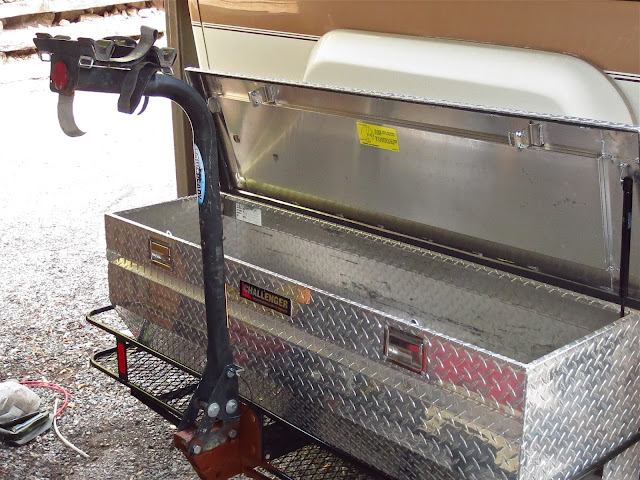 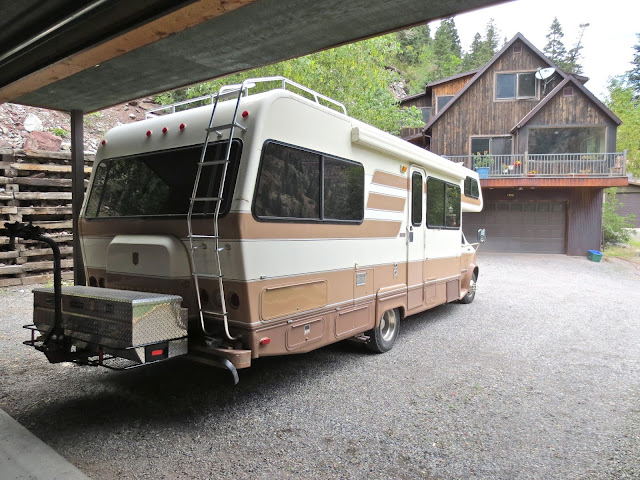 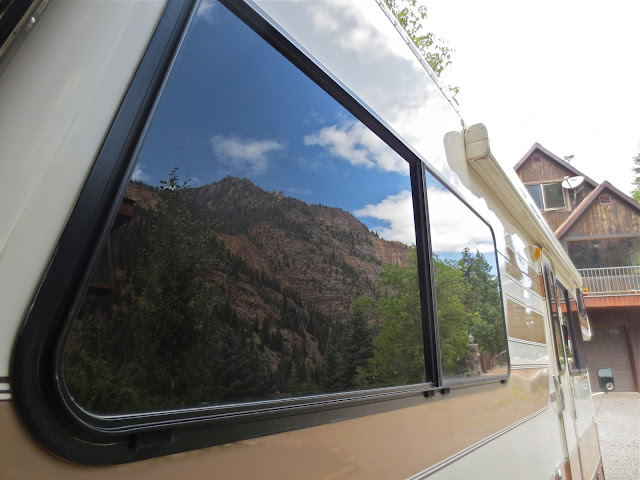 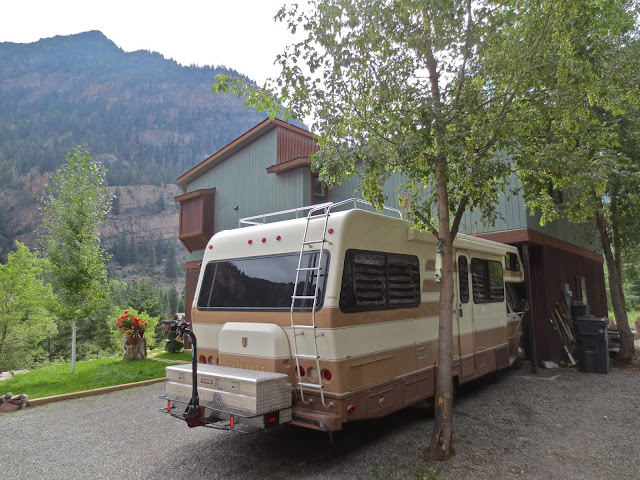 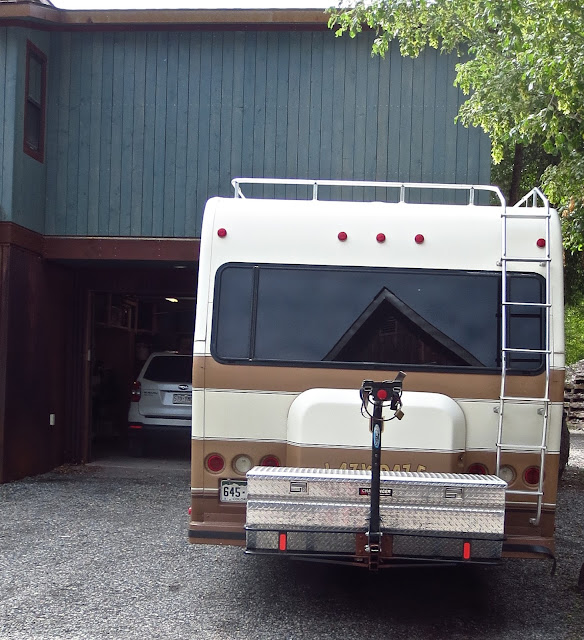 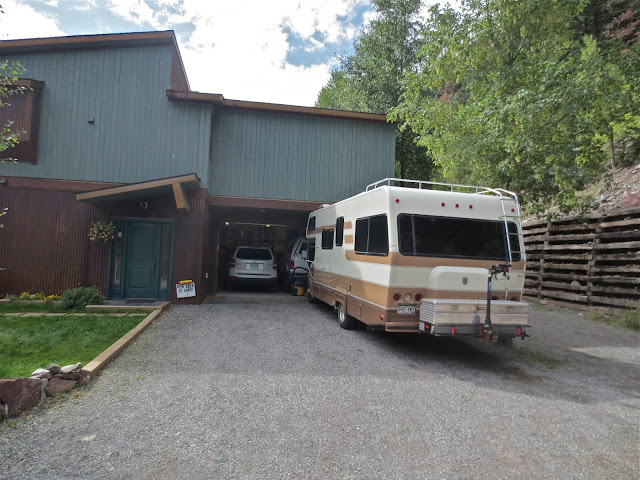