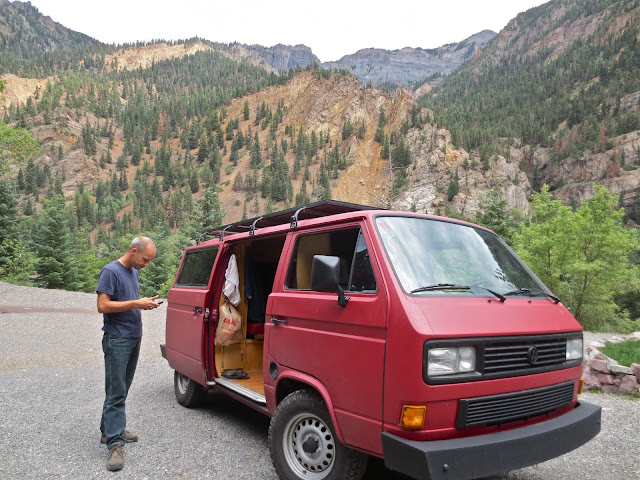 My curmudgeon (but evolving) pal Boonie took hold of the horns of the Universe and with bare hands (ok, an email) bent two separate, wandering paths to intersection. Well, to be honest, our path wasn't going anywhere for a while so I guess The Boonster had only to nudge one path, and it wasn't all that difficult because it was a path so light and blithe it almost floats like a ballon—impacting Mother Earth with a gentle green kiss on the cheek, as opposed to our carbon footprint's repeated sledge hammer blows to her head. Yes, Glenn, the CEO of "To Simplify" paused in Lovely Ouray, took pal Boonie's advice and looked us up.


It is said that every new acquaintance alters one's course in life, if only imperceptibly. A new idea thought to be your own may in reality have sprouted from a seed planted by an encounter with another, way back when. I felt like Glenn was one of those encounters...a wealth of information, well traveled, and a largely self-taught jack of all trades, out of desire instead of necessity, not to mention a multiple instrument musician to boot. He's even figured out a way to make a living on the road, pushing dots, as he says, writing music scores for Hollywood TV. Damnation, if that don't beat all!

I think for Glenn it was a personal choice that felt comfortable more than setting out to save or change the world. I doubt he set out to be the well known internet Evangelist/Guru on Simple Mobile Living that he has become. Nevertheless, his blog strikes a cord, the achilles nerve, if you will, amongst a few people who feel like they are indefinitely enslaved to a treadmill...the one's who can't see the end of the tunnel and think, "There's got to be a better way." Well, there is...but it's not for everybody. How bad do you want it?

In the course of living a conventional city life and working as a professional musician in the bowels (my term) of LA, Glenn began to entertain ideas on simplifying...of minimizing the enormous waste that Modern Living Media tells us we can't live without. Whether inadvertent or intentional, he is changing the world, one person at a time. His daily scribblings on To Simplify are well articulated, a brimming fusion of sardonic wit and self deprecating humor...and maybe just a touch of well deserved "know it all" attitude. Well, he is a student of life, that's for sure.

Since Glenn's journey went mainstream (he gets an incredible amount of Hits) it leaves in its wake burned out, corporately disenfranchised readers who scratch their heads and wish they could do "that," me included (excuse me while I put down my sledgehammer). Glenn is quick to point out that it is one thing to "wish" and another thing to commit and do. It does take balls; there is a lot to lose. But then again, there is so much to gain.

So what happens when To Simplify meets up with To Complicate? Well it wasn't an argument, that's for sure, as I was drooling over the simplicity and coolness of his rig. It was a little embarrassing to confess our two stick homes and a gas guzzler motorhome with generator, especially after getting a first hand tour of his downsized rig experiment. After 8 months of conversion toil, he is on the maiden voyage. You see, Glenn took an already minimal RV lifestyle existence and cut it in half by purchasing an old used VW Vanagan and converting it into his living quarters (gee, what's next, Glenn, a Mini Cooper?). That's right, folks, a Vanagan—not to be confused with the fancy smancy, well appointed, lots-of-headroom Westfalia. His design limitations left him with no pop-up, no bathroom, no shower...just a van he stripped to bare bones and reinvented from the ground up according to some savant-like how-mimimal-can-I-go plan in his mad scientist brain. It's a micro but comfy space where only the most essential items are allowed... a place to eat, sleep, work, and travel, and do it simply on less carbon than a barefoot caveman with a campfire.

Thus, the 500, count 'em, 500 watt solar array on his rooftop...normally enough power for two full size motorhomes. He don't need no stinking generator; even if it rains for days, there's  still juice trickling to his monster of the deep cell battery. Hell, I wouldn't be surprised if he isn't cranking 50% production with just the sun's reflection off a full moon. Such an array on a Prius might allow Toyota to do away with its gas-assist motor entirely! This, of course, caused me to rethink my own solar installation about to get underway on Goldie, i.e. now upped from 160 watts to 300.

Aside from the array of solar panels on top, his van looks like any other Vanagan. This allows for "stealth-camping" in places normally off limits for overnighting. Think of the possibilities. Of course it helps to be single, and pet-less, although a smaller pet or non-clostrophobic wife might work. Speaking of which...Bobbie and I racked our brains trying to come up with an age-appropriate gal to invite over/introduce at one our brews and BBQ get-togethers (always the matchmakers). Buuuut it seems all of our single girl-friends have grown old along with us. Hmmmm, sorry Glenn. Next time, we promise.

I guess I'll have to send Boonie a "thank you" card for connecting Glenn with us. He's a bright guy, easy to talk and listen to, has lots of stories, and is a fellow wanderer...the thread that binds wanderlusted souls. His rig and "style" is minimal by choice; he lives with less, even though he doesn't have to. I hope Glenn comes back in top shape as promised, so we can drag him off to some of our special high country places.  Here's to the incredible shrinking "footprint" of a really nice guy. Cheers. 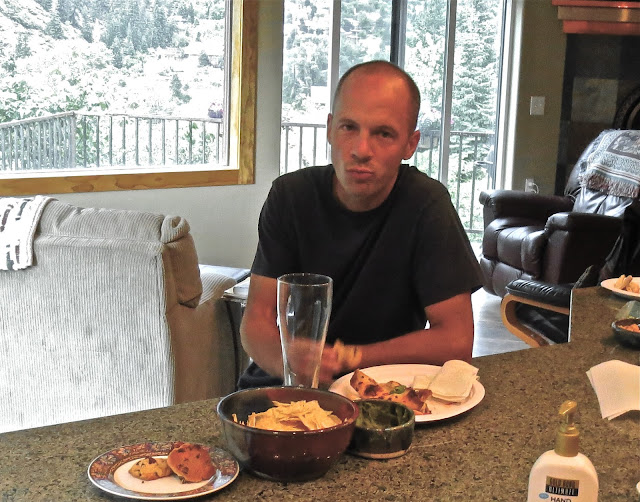 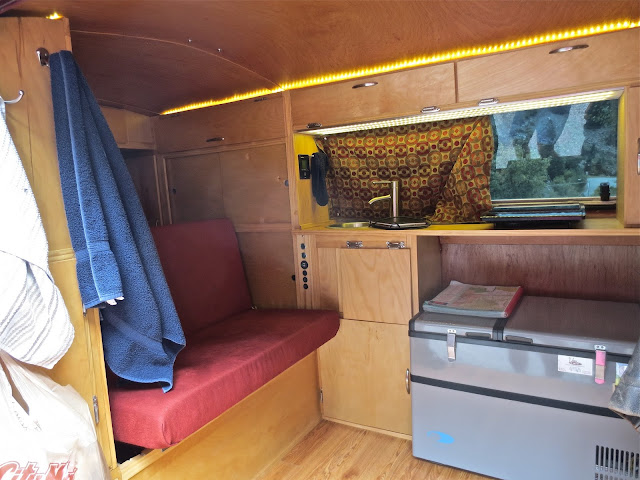 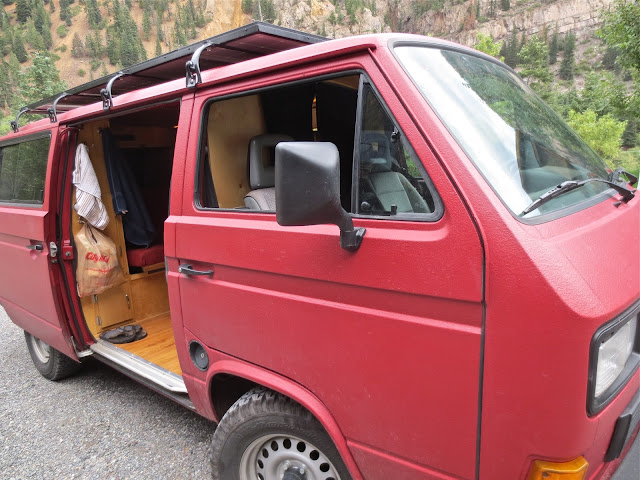 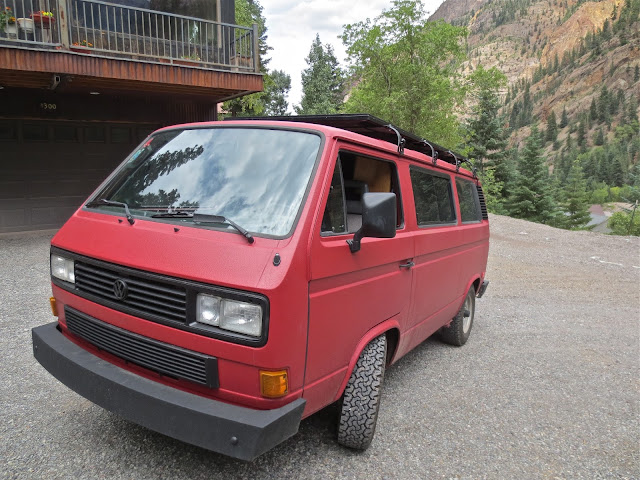 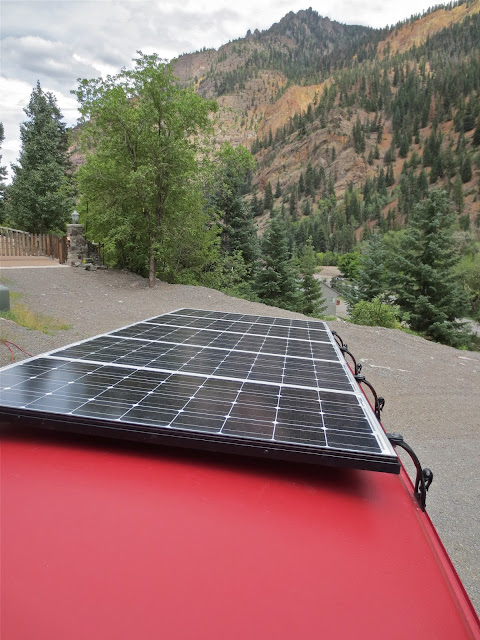 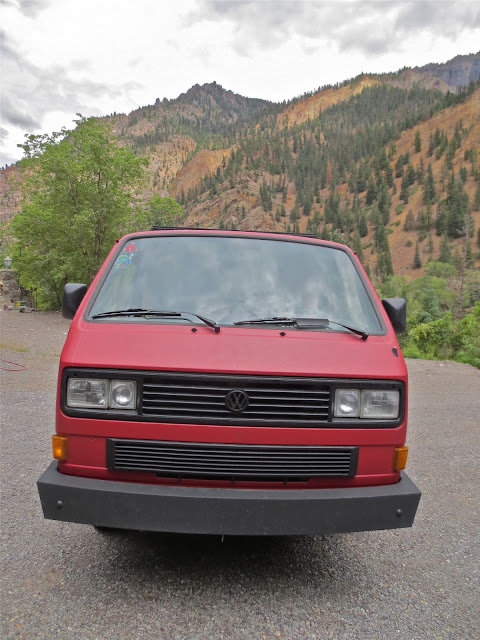 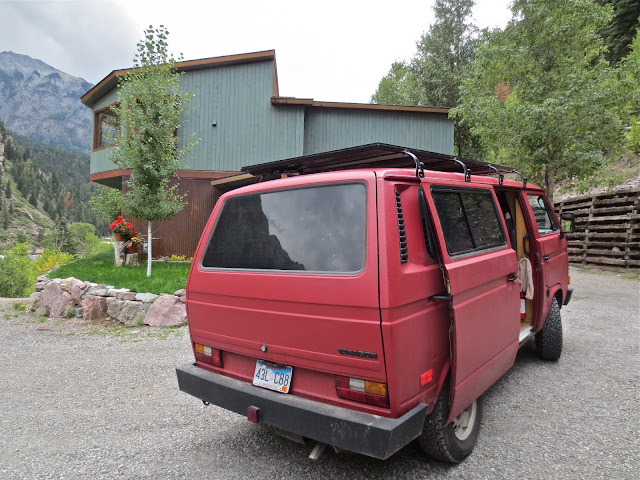 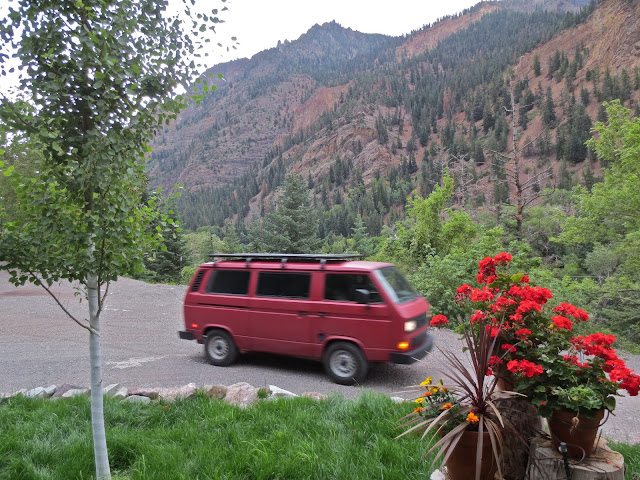