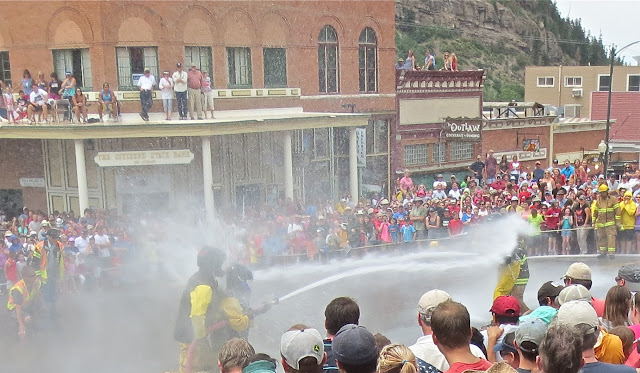 It's tradition, dating back to old mining heydays of the late 1800's, to form a circle around the intersection of Main and 6th in order to watch men (and now women) pummel each other with a hundred PSI jet streams of water. It's brutal, combat—not for the faint of heart—and I'm just talking about being a spectator. Yes, you get wet no matter where you stand, and if you prize a front row position you may just get knocked to the back row by errant streams of water.

Contestants take this competition seriously. Honor is at stake...hell, lives are at stake. First comes the suit-up for the fight. I was anxious to watch women show "what they got," and thus attended the "mixed doubles" team event. 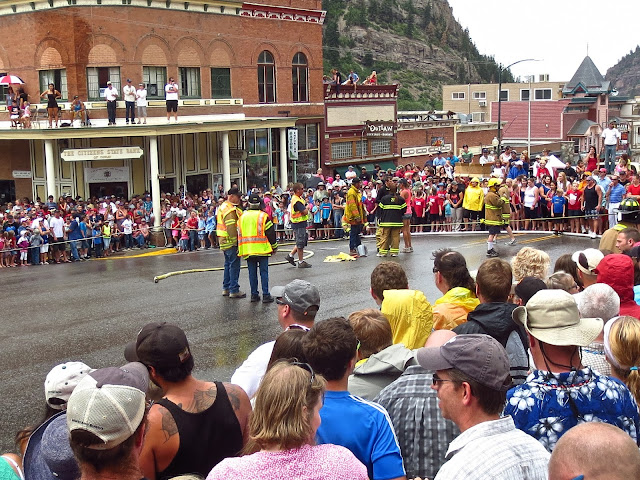 If you want a front row "seat" (and everybody does...till the water starts flying) you must get there early. 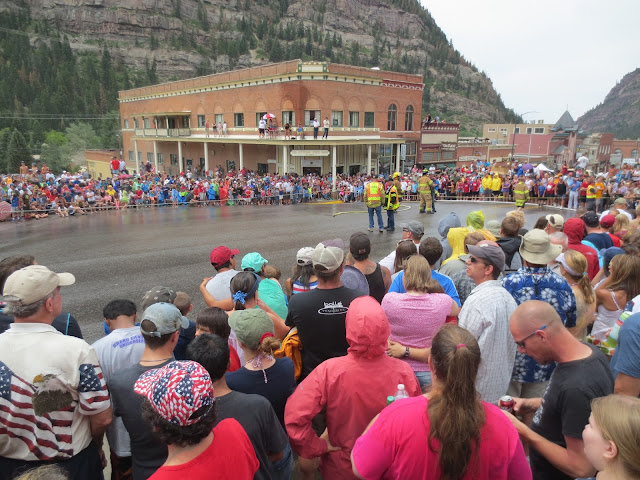 Locals and people who have attended these events before often come prepared...wearing everything from Gortex jackets to trash bags. But it was a sunny, hot day; what's a little cold water :) 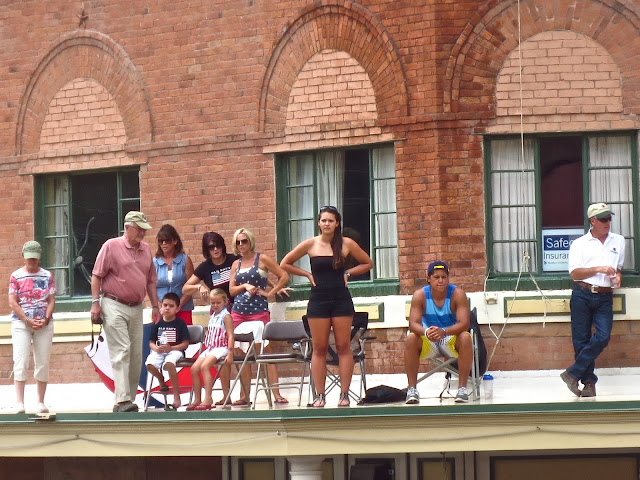 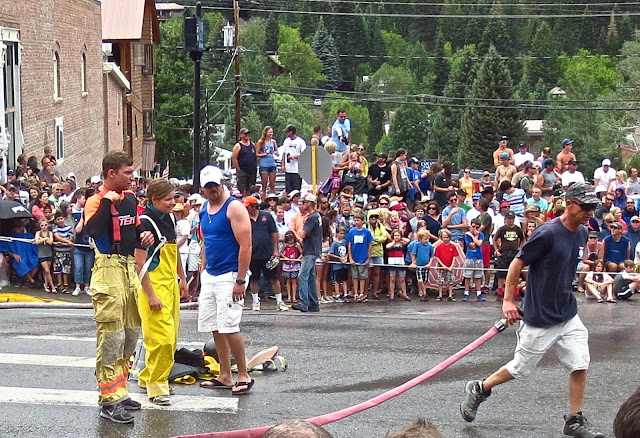 Before the fight started, I chose to root for this team. They had a look of serious determination in their eyes, the kind that can't be faked. 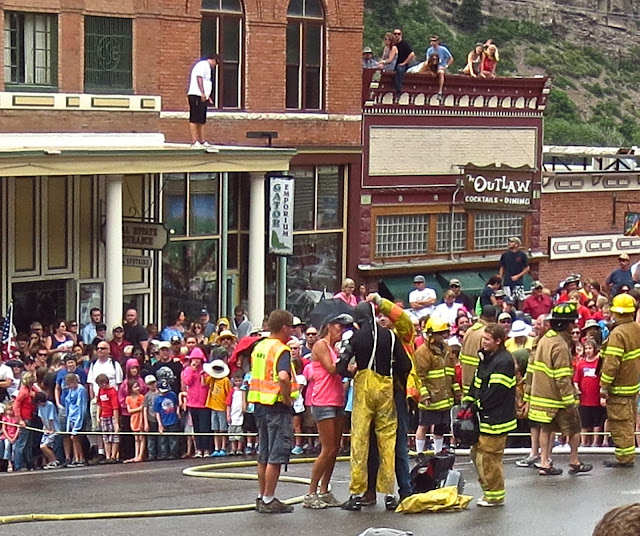 Besides, the other team was further away. 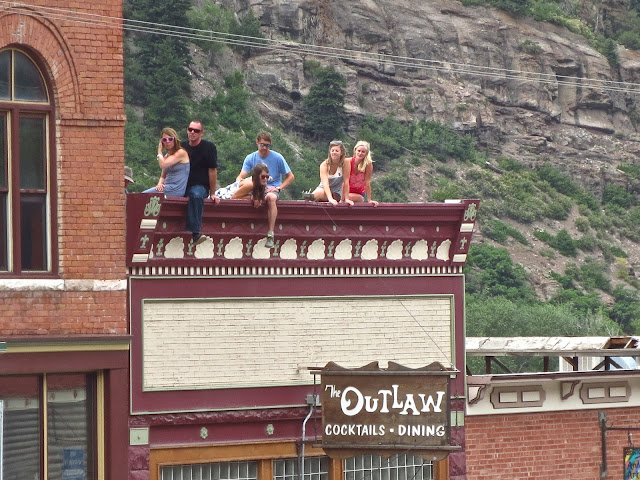 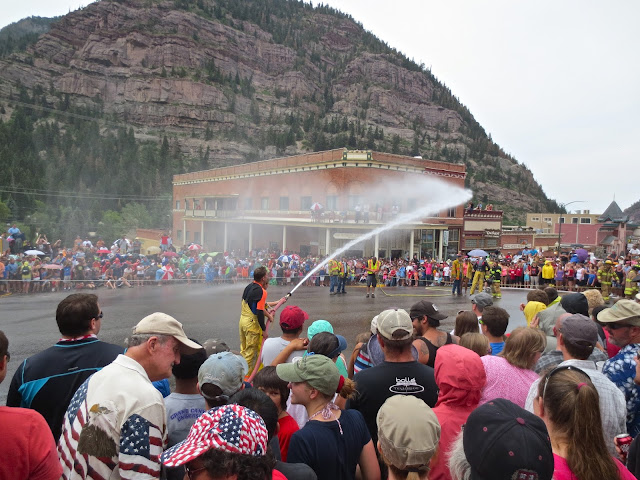 Tradition has it to water down spectators for a while before going to battle. No one is safe. 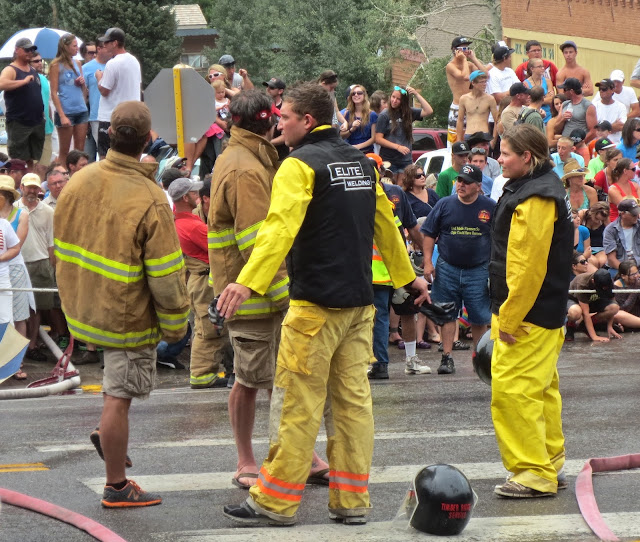 The referees (in shorts) have a last minute meeting with both teams to go over a few rules. The object is simple, teams try to knock each other off their feet and to the ground to win. But most of the time a match ends with a "surrender." Even with two people wrestling a fire hose, after about ten minutes with so much pressure they are totally exhausted! On my team, the girl took the lead (front) position. On the other team the guy took the lead position. Interesting...I tried to figure out the advantage of either way. It's the lead position that absorbs the brunt of the beating. The secondary position (rear) is there in more of a supportive role...to help steady the "shooter" and help maintain control of a hose that's trying to lift them off the ground. 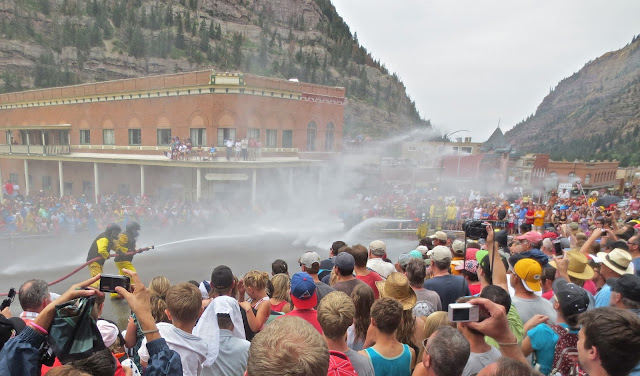 Just like the gunfight at the OK Corral, teams start far apart and slowly close in on each other. 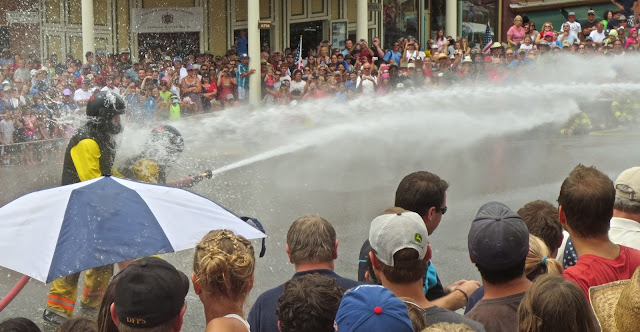 Even at this distance, you can see the gal on my team taking a beating to the head. Going for the head is the best strategy for a couple of reasons, one, it's hard to see your enemy when your face shield is being battered with water, and two, even with a face shield, properly aimed water can ricochet up under, which makes it extremely difficult to get a good breath of air. Fighting for air is what puts people on the ground...if you can't draw a clean breath of air when exerting so much effort, you're toast. I'm told the noise inside those helmets is like standing behind a jet engine. 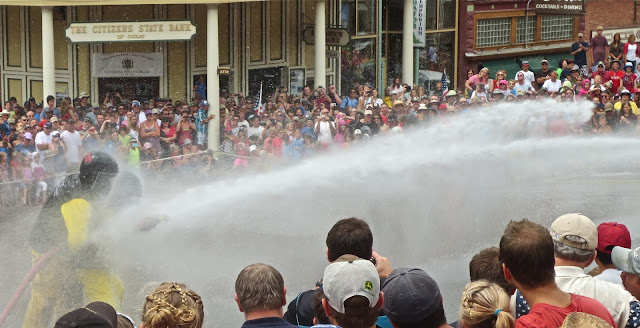 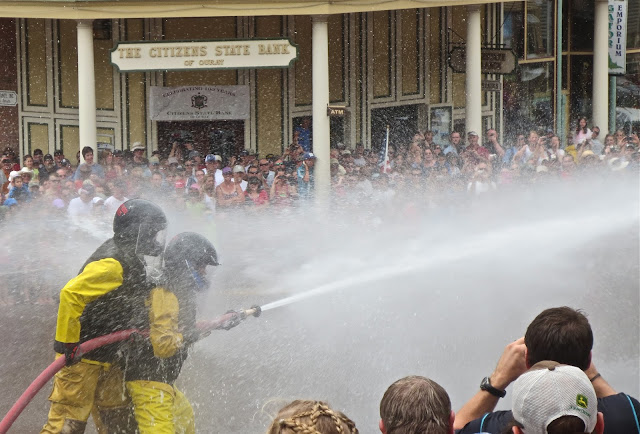 A good backup...supporting his gal, steadying her, taking most of the weight of the hose which allows her to concentrate on aim and "fire." 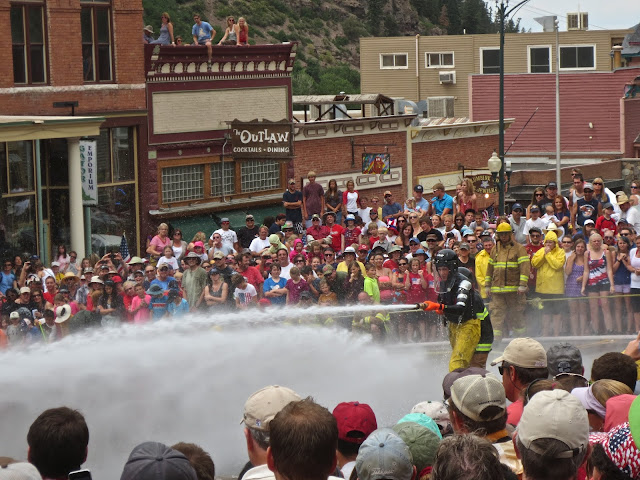 The other team, as you can see here, has the initial advantage with the stronger male in front. They are high and dry as he's able to blast my team's gal's face area, which throws off her aim. 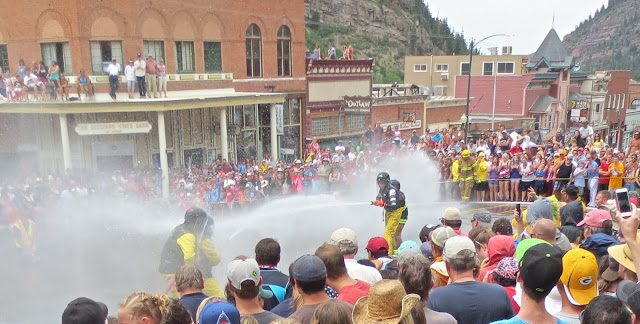 The other team begins to sense a "kill" and closes in...you can see he has a bead on my teams lead gal's face; she's so blinded that her water shoots off into the crowd. The crowd senses a quick kill, too, and ushers up a deafening roar. It doesn't look good for my brave lady in front; she's getting the shit beat out of her head and face. 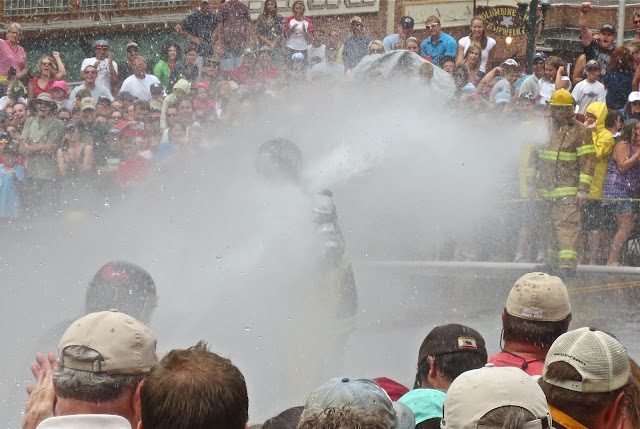 Suddenly, my team squats down, and finds their target. My team's lead gal is desperate for air after taking it in the face for over several minutes. She recovers and locks in a bead...hitting the big guy on his chest and right UNDER his face shield. Water fills his helmet...he can't breathe, he can't see. The crowd roars at the comeback. She's spunky, relentless, brutal...pouring it on hard...unwavering from the "sweet spot." God, she is good! 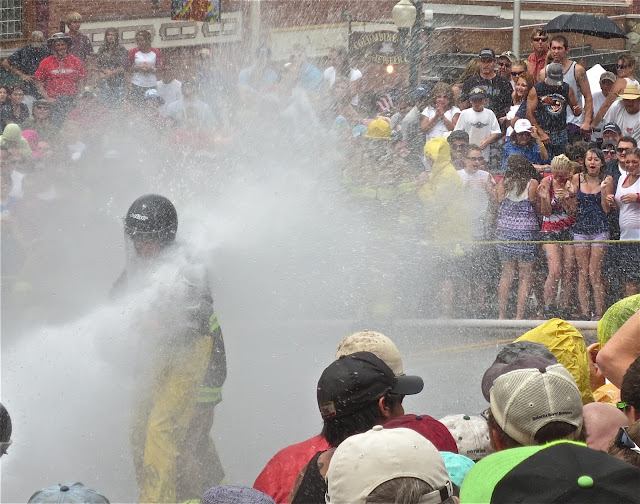 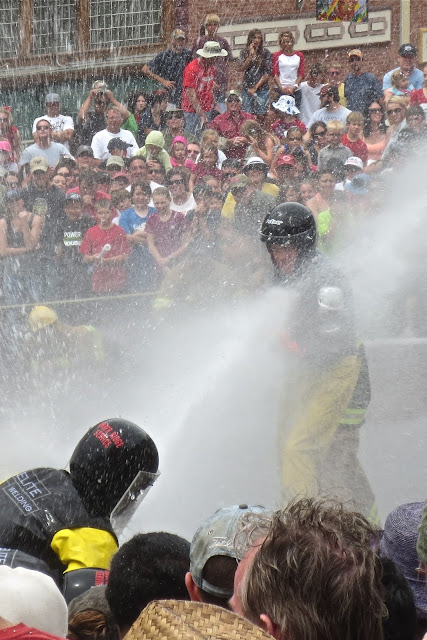 Squatting down gives my team a better angle to flood their opponents airway from under their face shield. The guy on the other team tries to charge but is turned back; he puts his head down in order to get some air and regroup. 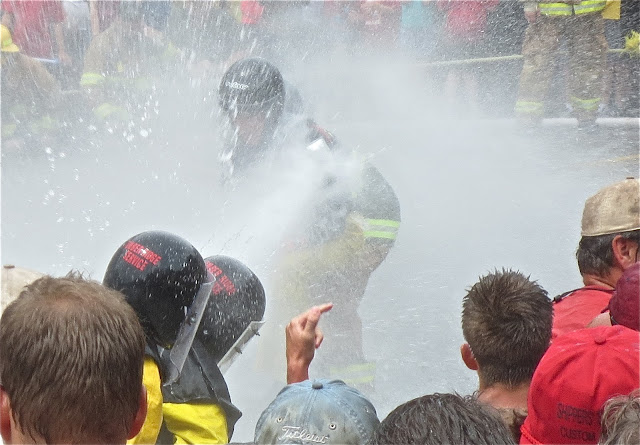 She keeps the bead on him...he's in trouble. She continues to blast his chest and neck. He's begins to stagger and goes on defense...turning his back in order to breathe. Over ten minutes into the fight everyone is soaked...cheering. How long can the keep it up? It's not near over. 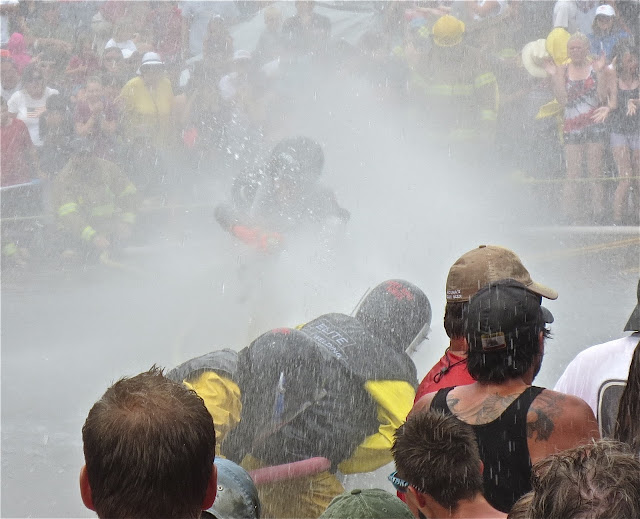 It's WW III right in front of me. I take a hard shot right to the chest...drenched to the core. Water is assaulting the crowd as much as the combatants. It's raining bullets in Lovely Ouray. I try to shield my camera. The crowd goes crazy...roaring. 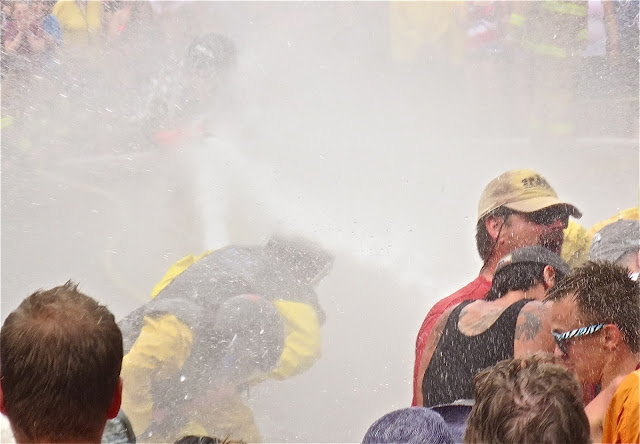 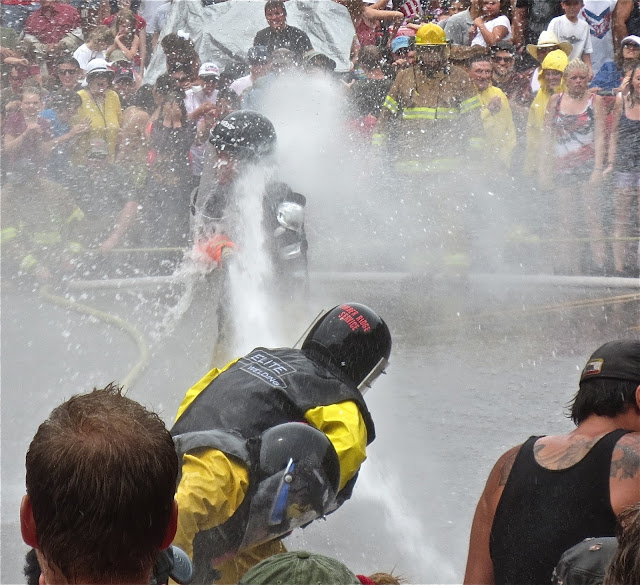 My team is relentless...they may have traded places, I can't tell in the haze of "war." They have a renewed sense of energy and focus, and pummel their target right in the sweet spot. Everyone senses a "kill" and roars. My soaked camera captures a look of determination (desperation?) on the other teams lead guy. Twenty minutes and running; nobody's going down without an exhaustive fight to the death. Bragging rights for an entire year are high stakes in a small town. But the contenders are getting weary, fighting the hose, fighting each other, fighting for air. Will melts like butter under a hot sun. This battle will be won on desire and strength of mind. 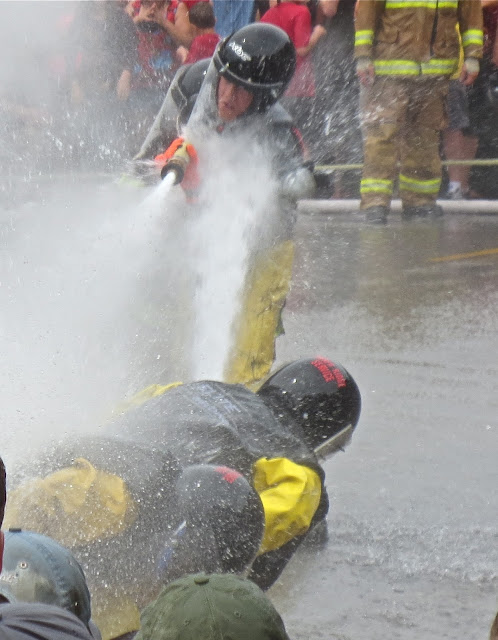 Finally, my team senses a now or never moment. They close the gap, find the sweet spot and pour it on. The enemy can't breathe...he turns his back to gulp some air...his weapon shooting harmlessly into the crowd. He stumbles, almost falls, fighting the hose with frozen hands that are losing their own battle with grip.

His partner tries to steady him...to get control of the whipping hose and put it back in his hands...but he can't see; can't aim; can't breathe; can't feel. There's "blood" in the "water" now, and it is his. My team closes...it's time.

It was more a mercy killing than anything. Hands go up, a signal of surrender. Water and weapons are laid down, the battle is done. Participants collapse in a heap of exhaustion. The crowd rushes in...cheering, rejoicing—consoling, hugging. It was a good fight, and I would be proud to have any one of the four in my fox hole, anytime. 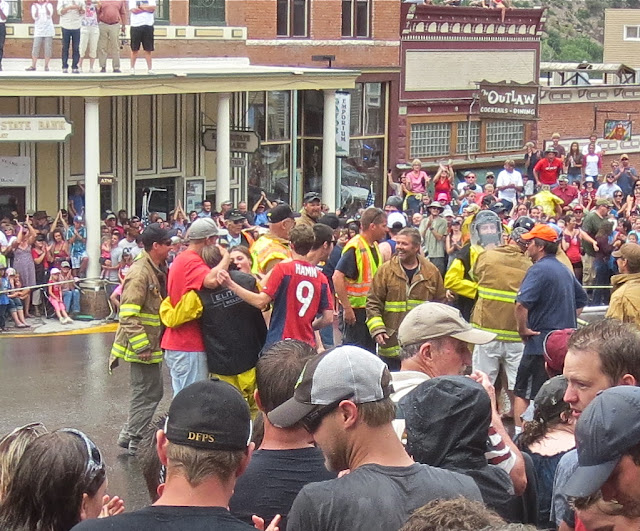 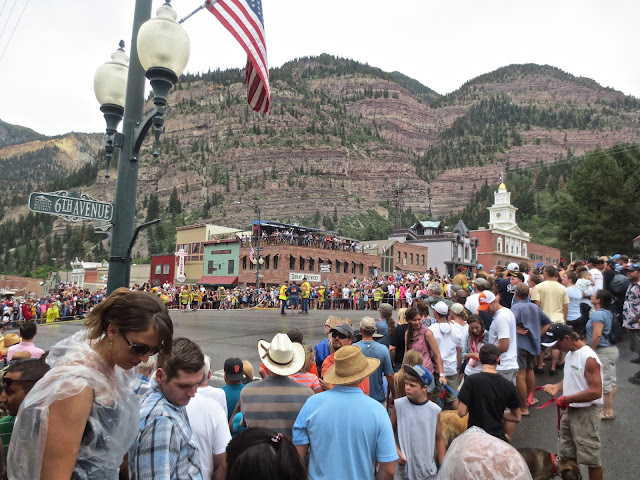 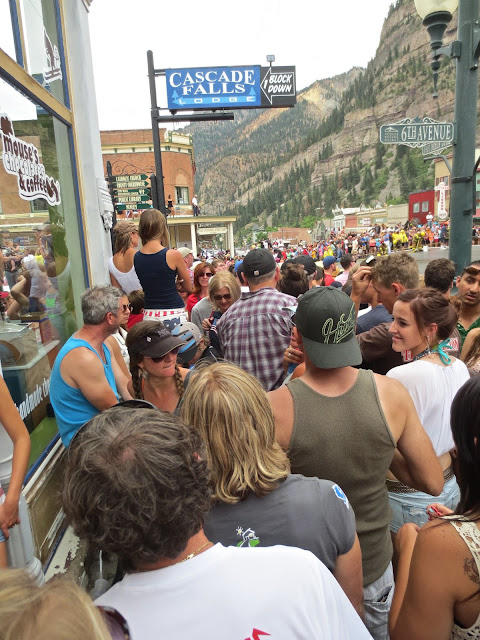 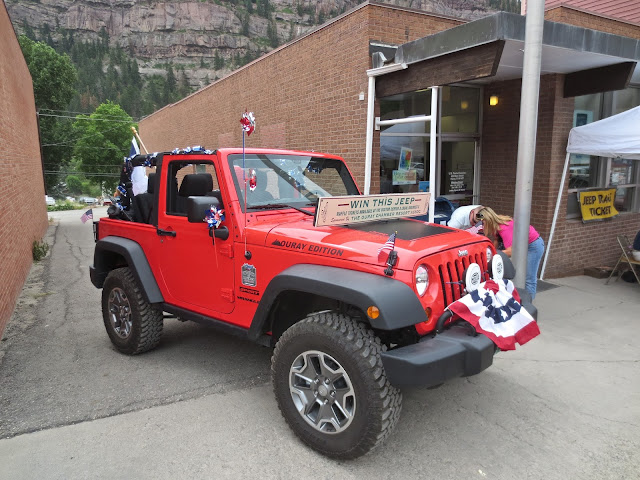 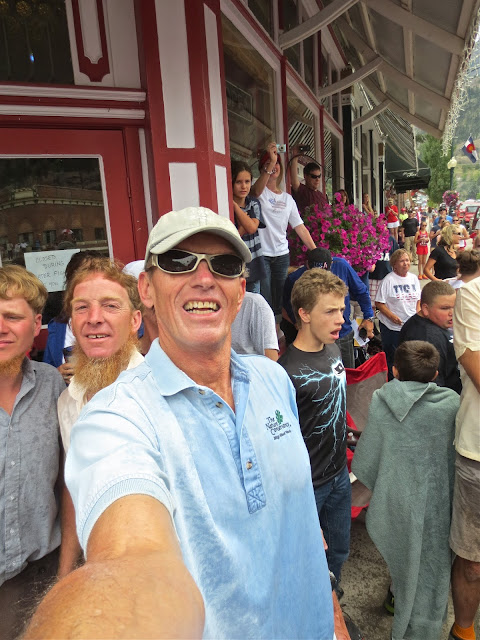 That's me—shirt soaked in "blood." To the immediate left is my "other brother" Darryl, and next to him is a "half" brother...also named Darryl :))

John Q has arrived in Lovely Ouray. He's camped in his A-Liner up in the Amphitheater Campground above town. I think Walden Steve is in route to visit too. We have mail for Pal Boonie, so I believe he will be arriving shortly...tho one never knows. I have a feeling a party is brewing. Fire up the grill.
Have a great week! Now go take a hike :)
Mark and Bobbie.