"You Can't Touch This," Hammer Time, Break'in It Down 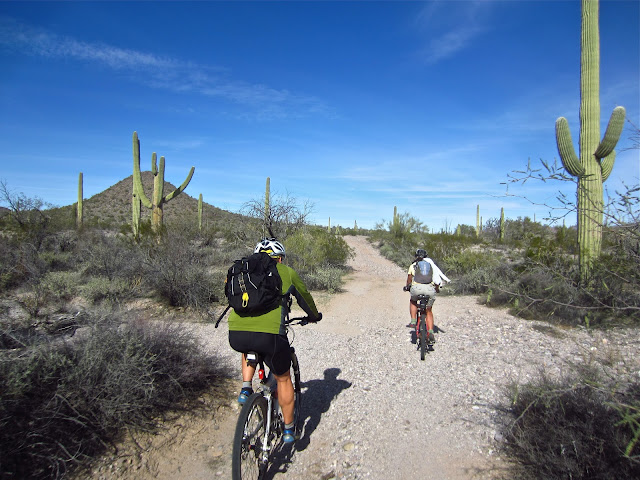 I am posting near "real time," less the "fire" cool to embers of "who cares, it's just one Park... down Meh-hee-co way."

We moved on from Organ Pipe to the birdwatching mecca of Madera Canyon, south of Tucson. I'm falling way behind with spotty internet connections. I promise to get back to our travels down the Colorado River corridor from Lake Mead to Parker; it is worthy territory and I am itching to share a few of it's wonders with the BCB "faithful." I think we'll return there, spend a couple of months, if not all winter, next year... boondocking, hiking, biking, and kayaking. It has an enormous amount of lake and river water, beautifying an otherwise austere volcanic desert... a landscape clash of color, concept and content. I can feel it now, tugging at our collective boot, bike and Kayak heart. So stay tuned for that; 'nuff said.

We've been sustained by Postcard Landscapes, from water and mountains in the Colorado River corridor, to cacti and mountains in Organ Pipe. Who says you can't "eat" the scenery? Bobbie and I met our wandering friends, Susan and Maikel Wise, in Organ Pipe's campground five years ago almost to the day. The "Wiseone's were on their first treadmill "sabbatical," while we were on our our third. The dejavu of meeting up on the fifth anniversary right where we first crossed paths was not lost on me. They were waiting for us in space 20 this time, and had a couple of mischievous adventures in mind... "out of bounds" adventures. Hail to the "Wise," and their miscreant mantra, "Rules are for Sissies." 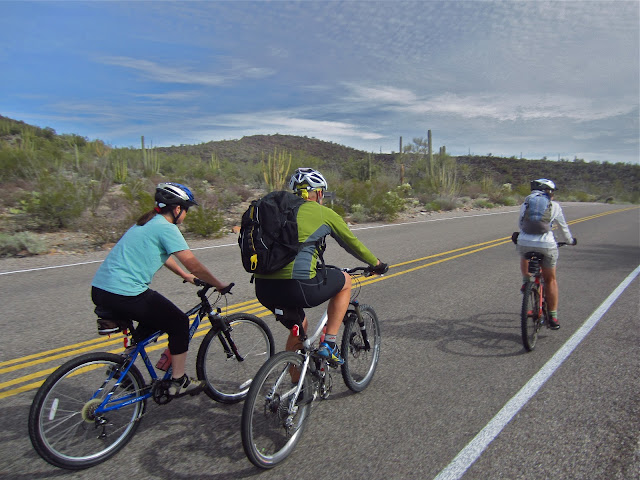 If you missed the previous post, "Parting Shots," now would be a good time to go back and read it because I'm going to take up here were I left off there: "The most powerful nation on the earth has given up and let some of it's prime land be controlled by another country, and it's starting to piss me off!"


We have been to Organ Pipe many times, the first being March of 1986. I only know that because Bobbie is the "reminderer." "That's where we watched Haley's Comet!" Ah, yes... now I remember. Haley's Comet streaked across our star glutted black dome, an amazing once-in-a-lifetime experience. Organ Pipe is so out of the way... free of light and air pollution. Night skies are as clear and sharp as Carl Sagan's Cosmos photographs, (R. I. P.), as if you're looking through a magnifying glass when compared to a "city" backyard. Where did you observe Haley's Comet? 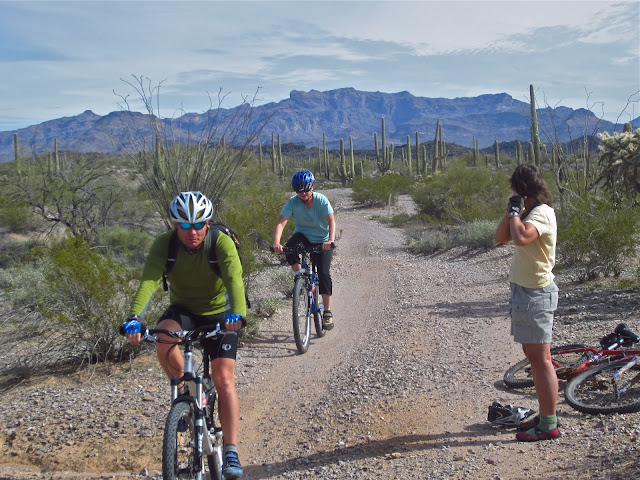 I'll page through photos of our bike ride with the Wise-ones while I get this post off my chest. We were on the second day of a quest for the Holy Grail of Cacti, Senita!  Susan seemed desperate to get it checked it off her Junior Ranger "list."  Evidently, one is never too old to be a Junior Ranger. The irony is, we had to go "out of bounds" to find them... you know, into the "Twilight Zone," that area we've given back to Meh-hee-co, to use as a "highway" to the good ole U. S. of A.. 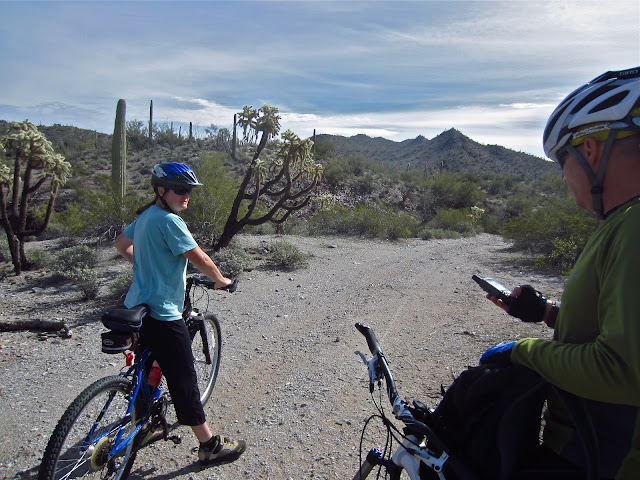 Let me be clear, before a few do gooders get all ragged out... thinking I'm an "intolerant" SOB, as well as other political blasphemies. First and foremost, we are all immigrants, even Native American Indians. They got here first, though, by a long shot, and that should count for more that it does. But we can't re-write, nor, apparently, re-right history. All I can say is that I hope oodles of oil and natural gas is discovered under the God Forsaken Reservation land we stuck most of them on. 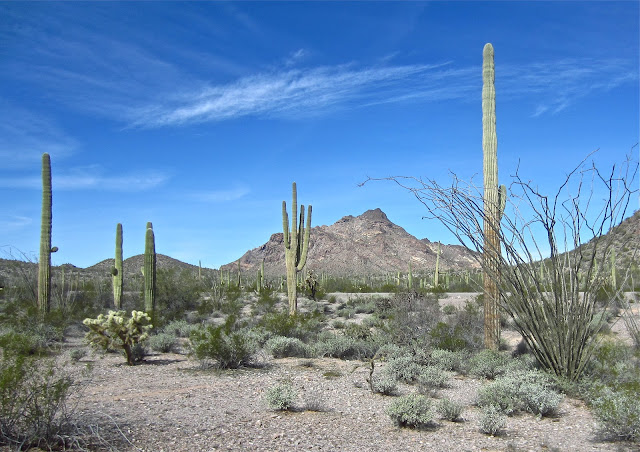 My beef, this post, is not about the illegal immigration or drug pipeline from Mexico. Do I think something needs to be done about it? Yes. Will it ever happen? I have my doubts, because it has become a political issue. Let's face it, if one wants to be President of the United States they best not piss off the fastest growing block of voters out there. As an aside, unless "things" change within the Republican Party, I doubt there will be another Conservative President. That's how important and "hot" the "potato" is. You can just kiss our two party system goodbye. Where was I... oh yeah, "where's the beef?"

Politics aside, my "beef" is with how Organ Pipe is being managed (read, "mismanaged"). I imagine somewhere in a National Parks Ivory Towered building in Washington DC, somebody brought up the subject of illegals using Organ Pipe as a Highway to the good life... and "High" life. After all, it is our demand for "drugs" that creates the ideal petri dish for growing the problem of drugs in the USA. I imagine the meeting... called after a Park Ranger was gunned down in the Organ Pipe-line desert... the "motion to close," followed by a show-of-hands vote. "All in favor of closing all but the core of Organ Pipe? Opposed? Motion carries." However it happened, it happened. Somewhere it was decided that the best solution is to give up our Park instead of fighting to keep it completely open for the people it belongs to, US.


It's un-American, to concede defeat and give the bulk of Organ Pipe back to Mexico. It may not be the perfect analogy, but there is a Bear/human problem in the Parks of Glacier and Yellowstone. Still, one can still hike to their hearts content most of the time... the exception being a bear attack where someone gets mauled and dies. The Rangers close that area until they can find and ID the bear, "deal with it," and then the trail is reopened. 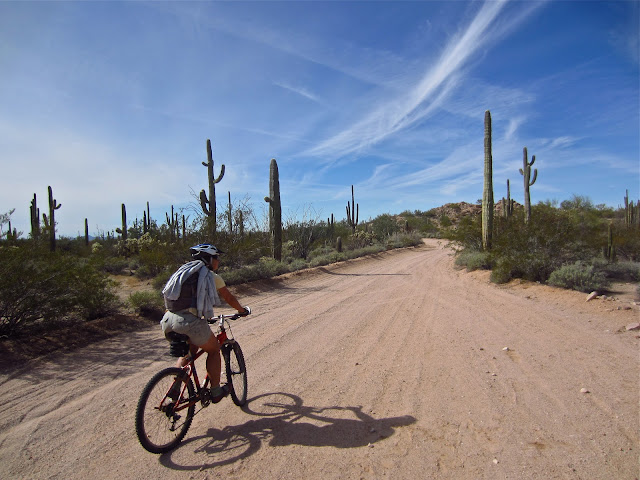 Danger is everywhere out here in the west... rattlesnakes, bear, mountain lions... moose, as big as your god damned car... cliffs, avalanches... cold and heat that can kill you in less than an hour. But we don't close Parks because of these problems for they are the very reasons why we flock to them... to see what it was like before things got paved and over populated. Is it dangerous? Somewhat, yes. People die every year... mostly "stupid" people. A Ranger at Organ Pipe said that the majority of rattlesnake bites in Arizona are on the arms of young males with alcohol levels above .10 in their blood. Women get bitten the least, and it's usually on the lower leg. That said, sometimes trouble finds us, even when we're doing everything "by the book." What are we going to do, stay in the house? Quit driving? Stop hiking? I think not.


Our biggest thrill is to hike Glacier's backcountry during Fall when the Grizzly's are active. We can't explain the attraction., it's just who we are... curious, mildly addicted adrenaline junkies who refuse to settle for a tedious existence, as seen and lived through a "window of safety." We find purpose, excitement, and reasons for living in the west's backcountry. Some find it in the lab, history books, or in teaching. All good. Just do something.


What should we do about Organ Pipe? I, for one, think, whatever it takes to open the Park in its entirety. Why not (ahem) "encourage" would be trespassers to go around the parks borders. Why not use the National Guard, if we have to... enforce, for a pitiful few miles, the rule of law. Station enough manpower along our fence/border to deter, if not outright prohibit, Organ Pipe from being used as a "pipeline." Make it stupid and dangerous enough that even fools would go around it. Hell, put turnstiles on both sides of the Parks boundaries, if we must, to encourage their use. Either go around or get busted, buster.


One thing we noticed on our bike ride through some of the wash/corridors of illegal traffic was numerous "humanitarian aid" water jugs left to water the "traffic." They were even dated so as to indicate freshness. What kind of message does that send? "Oh, it's against the law for you to be here, but since we can't enforce it have a drink on us." Maybe we should put the water jugs around the outside Organ Pipe's boundaries... hell, put food out there too, for all I care... give them a ride! But not in the park! 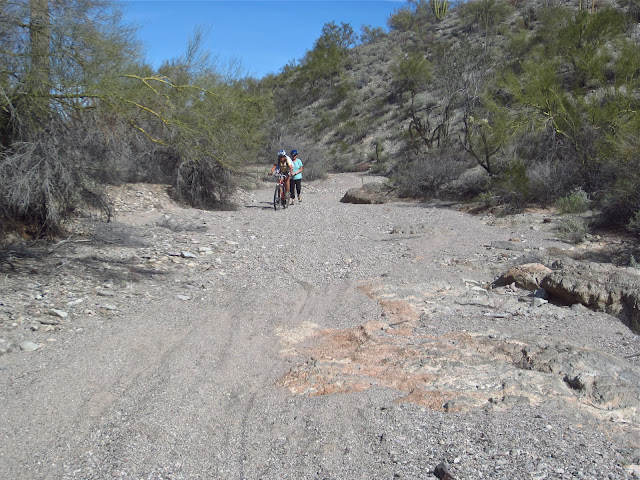 Why not post signs, saying in no uncertain terms, "You are likely to die of thirst, heat stroke, and/or get arrested if you use Organ Pipe to get into the USA! Please go around to either side and use the turnstiles. We have placed food and water at various rest stops for your refreshment. Thank you :) Have a nice trip!" 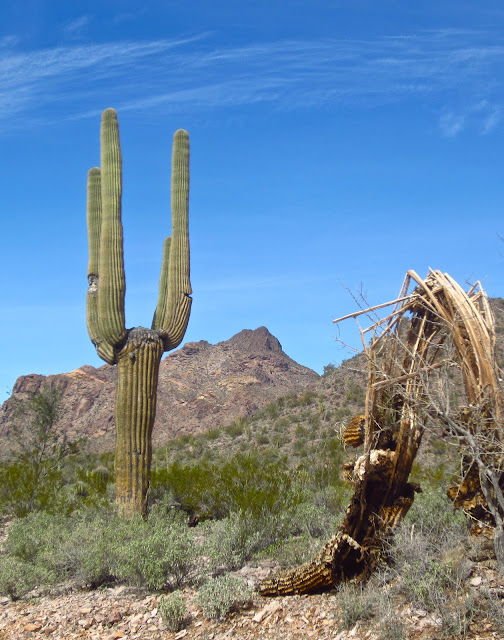 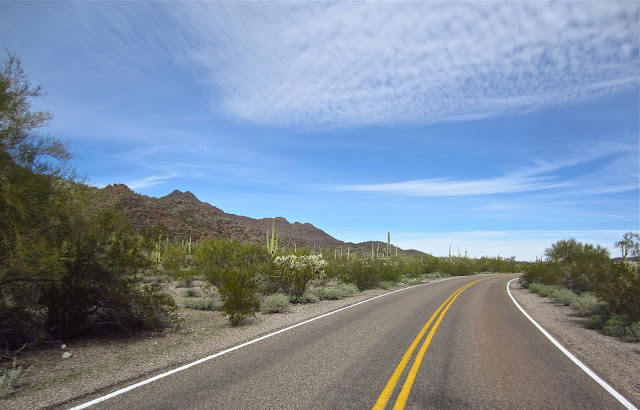 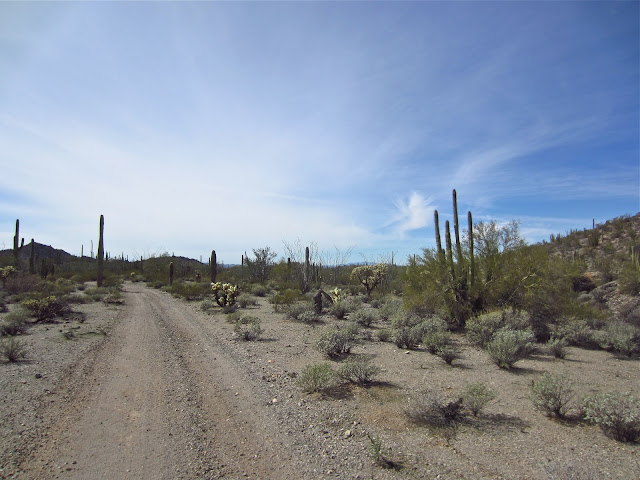 As for finding a Senita Cacti for Susan, well, we were forced to go out of bounds to find them. Sometimes you gotta do what you gotta do and break the rules to force a change... AKA, Rosa Parks. 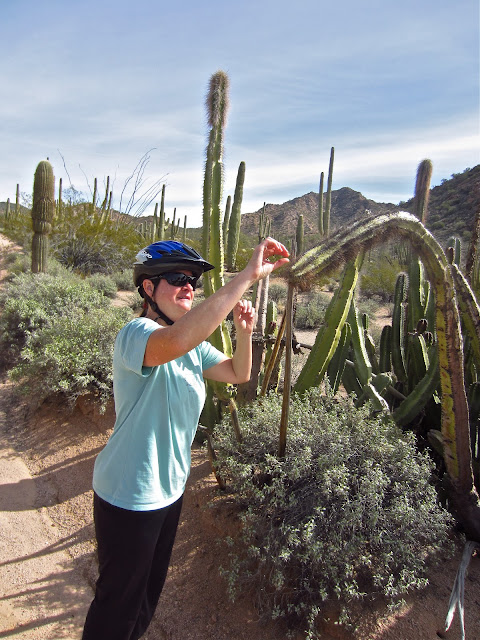 After many miles, traversing deep wash corridors of illegal traffic, thorough some of the most beautiful denied landscapes you will never see, we finally found a Senita! Then another, and another, and another. One particular small basin was full of them, abruptly so. 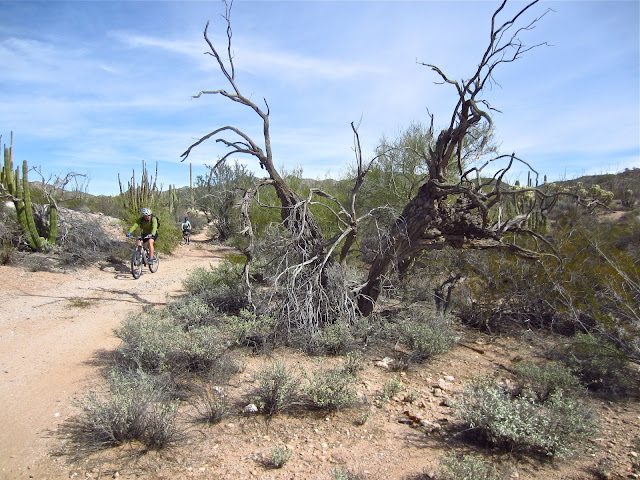 We were also on the lookout for an Elephant Tree, which I thought this to be (above). Alas... it was not. 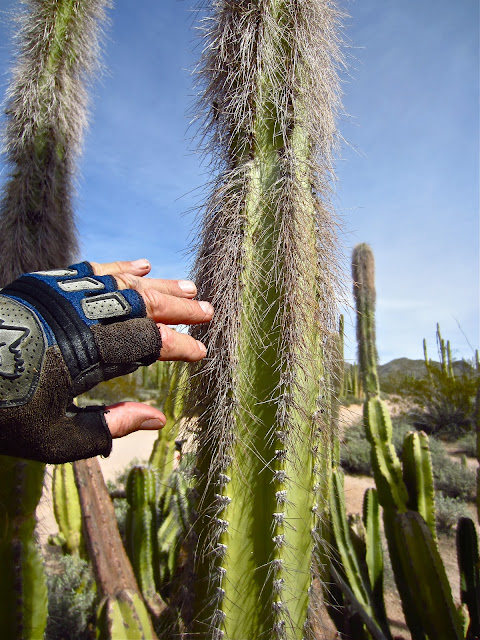 The Senita differs from the Organ Pipe cactus in that it has far fewer segments, five to seven, as opposed to twenty to thirty. The thorns on the tips of the "arms" are soft and resembles an "old man's beard" and are sometimes referred to as "Old Man's Beard Cactus." 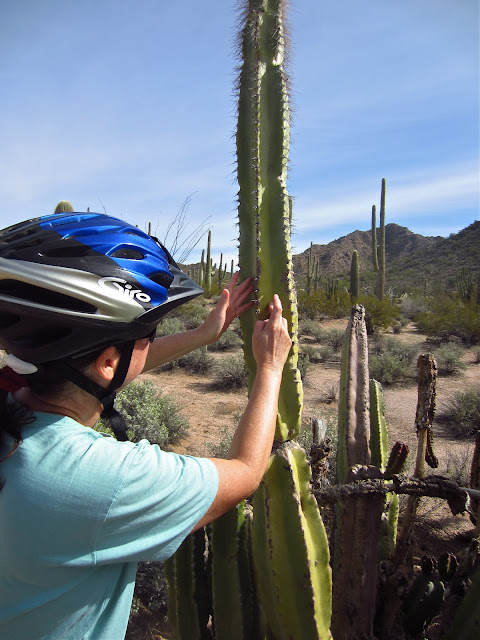 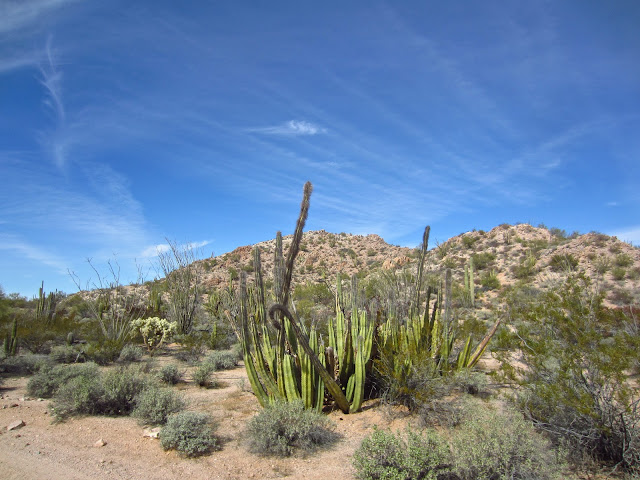 So much of Organ Pipe is now off limits to visitors... some of it what I consider to be the most beautiful like in the photos on this post. If something isn't done, this is as close as you will get to seeing what's out there. 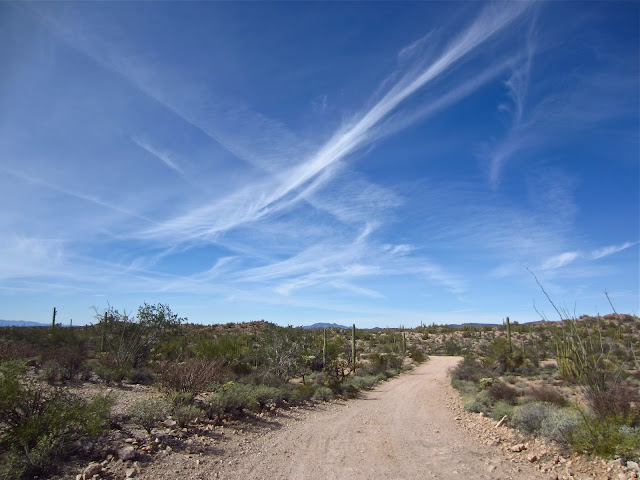 This road is maintained, but off limits. It takes you to where the Senita Cactus are. We kept an eye out for Border Patrol and Rangers... but no one came. We had it all to ourselves, well, us and the illegals. 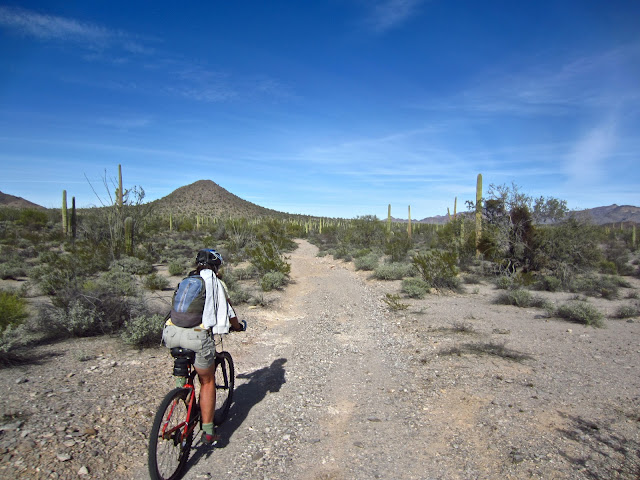 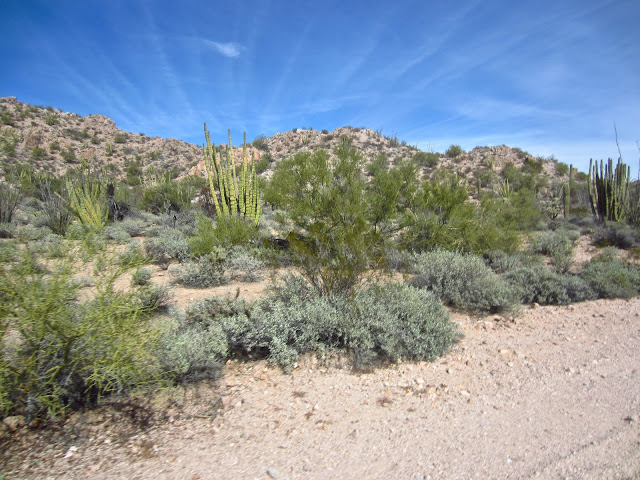 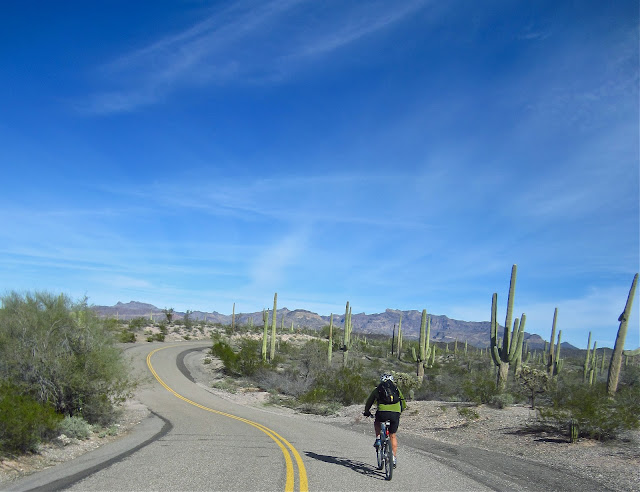 Back to the pavement... just before the new gate that closes off a major western portion of Organ Pipe. 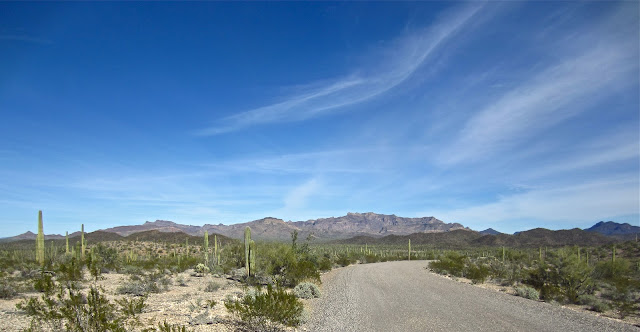 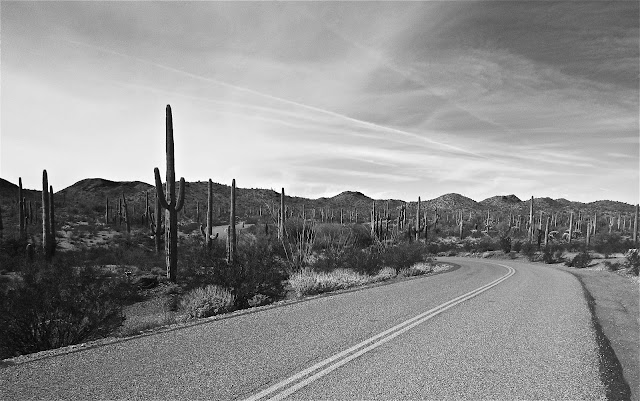 Posted by Box Canyon Blog.com at 9:03 AM