Sore Eyes, Into the Wind, and A "Beautiful" Rant: Plus, Life Lessons From The Summit Of The Orange Dragon


Grey Copper Gulch has to be one of the most... Ok, pause it here please; there is no worthy word... and I refuse to use "beautiful" one more freaking time. It's soooo diluted by overuse that it means absolutely nothing! Even if "Everything is Beautiful" in its own way, which is simply a lie, people need to find another word or words to express beauty; be more specific! Beautiful has lost its punch... Webster and Oxford should either dilute their definitions or remove the word entirely. Beautiful is becoming a noun, for crying out loud.


Look, Ja Lo is beautiful; Steven Tyler is not (why are teen girls still screaming over him?), nor is Rosie O'Donnell or Marty Feldman. Marilyn was beautiful; Marilyn Manson, not so much. Michael Jackson was beautiful, then he started messing with his nose. I'm beautiful, but it's on the inside where no one can see it. Now you know how "beautiful" became lame.


So, "one of the most" is all I got. Desperate, I checked my New Oxford Writing Thesaurus under "Beautiful" and there were no synonyms up to the task of describing Grey Copper Gulch. It seems it will take three words to do the job. I give you, "drop dead gorgeous." Alas, DDG only describes one forth of what I feel when there. It takes more words; I'll do my best to find them. Photos will help... and video, I made a little video. Maybe between all three you will understand why I hate "Beautiful." Now let's start again...

Grey Copper Gulch has to be one of the most drop dead gorgeous places on earth. No, I haven't been everywhere, so I'm going out on a limb. But my "limb" is three feet in diameter, and it's Oak, damn it—with rebar.


The only thing missing... the only thing, and I feel like an ungrateful schmuck for even bringing it up... were clouds, preferably cumulus, the kind that tower into the stratosphere with dark, threatening bottoms spewing bolts of fire. Hey, I'm a photographer.


But those kind of clouds were not on the day's menu; nope, we got wind instead of clouds... seventy five mile-an-hour gusts... enough to blow one's lovely hiking partner off the spiny backbone of a sleeping orange dragon. Honest, it was straight out of Dr Seuss.


If we were going to slay this dragon (summit) we should have chose a day when wind was't on the menu, like when I soloed the beast last year... under threat of lightening. As torture goes, give me electrocution over wind-boarding any day.


We agreed to go as far as timber line and the Vernon Mine. If it was too windy we could always turn around. Right. Like I'm going to get that close to a summit and let an itty bitty breeze send me scurrying down, tail between legs.

I skipped Vernon Mine last year in a rush to summit, trying to outrun dark bottomed clouds that threatened to unleash sheets of rain and bolts of fire. This time I had all the time in the world. Stepping over several "Keep Out!" signs that had obviously been blown off by wind, I decided to plead "ignorance" in court should a crotchety old miner accost me and my camera. Nothing like rusted, busted, falling down mining ruins with red mountain backdrops to embolden a shutter bug. 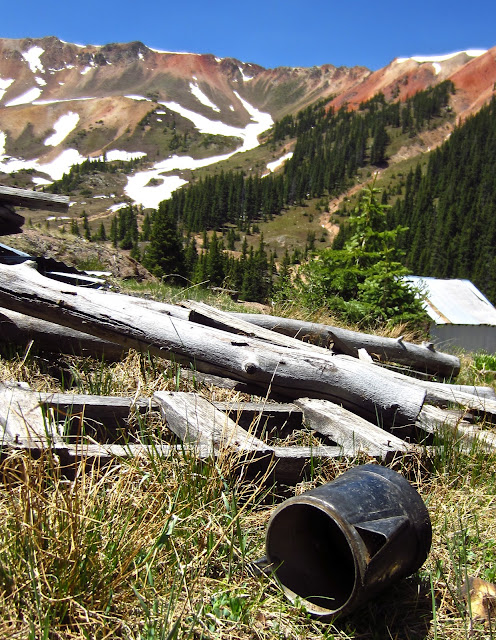 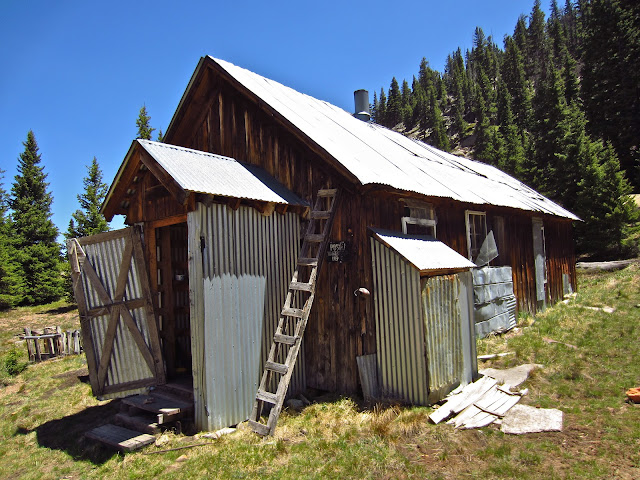 I tiptoed around, making certain not to step on a spring loaded game trap. You see, some "miners" are also "trappers" (emphasis on the quotation marks). Nothing deters "trespassers" better than word getting out about booby traps that can crush an ankle.


The door to the Miner's cabin was wide open... practically blown off its hinges. I peeked inside, "Hello, anybody home?" half expecting the impact of bird shot from the business end of a 12 gauge. Nothing. I stepped inside; floors creaked and moaned in protest. 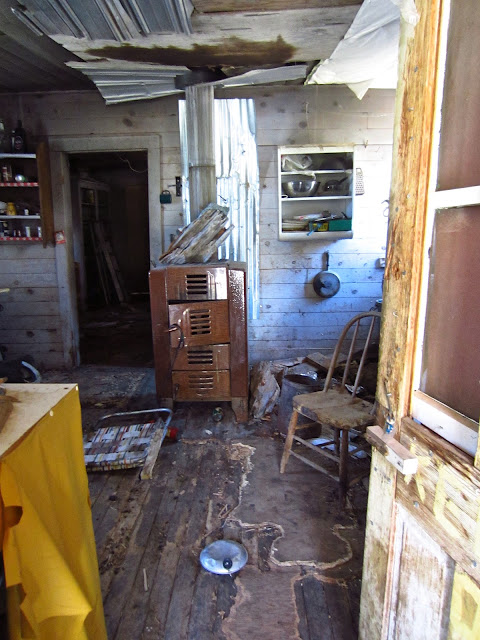 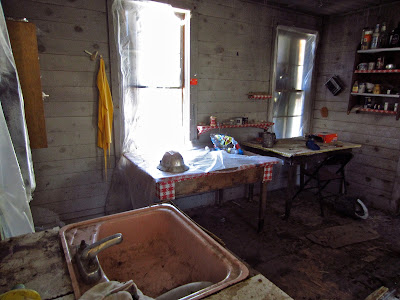 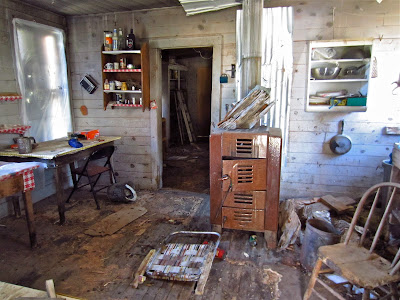 It looked like the dinning room had been vandalized by critters, maybe even a bear; stuff strewn everywhere. An old miners hat rested on a red and white checkered tablecloth next to a window. A functioning wood stove for cooking and heating stood cold and quiet; assorted spices and crappy kitchenware sat askew on shelves and floor. I shot a few photos from the doorway, skipping the back bedroom out of fear of what I might discover, then rejoined Bobbie... waiting patiently on the other side of the downed "No Trespassing" sign.


We approached timberline in the upper basin. Trees were sparse so the wind had its way with us. If it was bad down here, what it would be like on the ridge? I kept walking; Bobbie followed... up to a pass that was our connection to the ridge line approach. 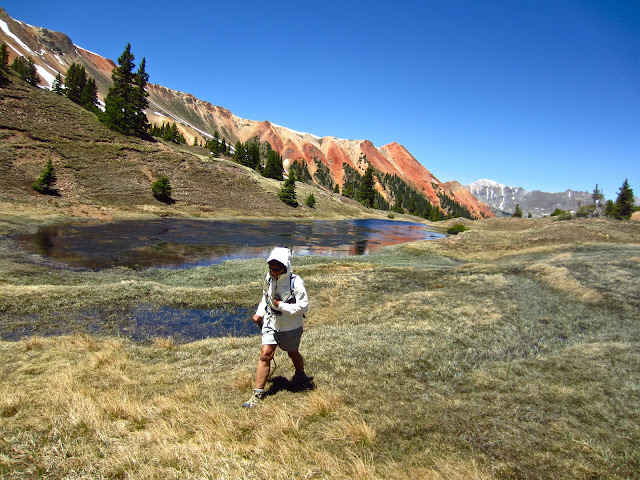 "Are you up for it?" I yelled into a wind that incinerated my words. "What?" I pointed to the the Red Dragon with my hiking pole. No answer was forthcoming; deliberation and reluctance froliced in the furrows of her brow. We huddled behind a useless scrub-pine; the wind and accompanying chill factor provided a real gut-check. Screaming now, "I'm cold; let's at least keep walking while we think about it." I strode off for the ridge, weaving in the wind, looking for a dry route between three handsome lakes and the path of least resistance to the Orange Dragon's backbone. This is crazy, I thought. 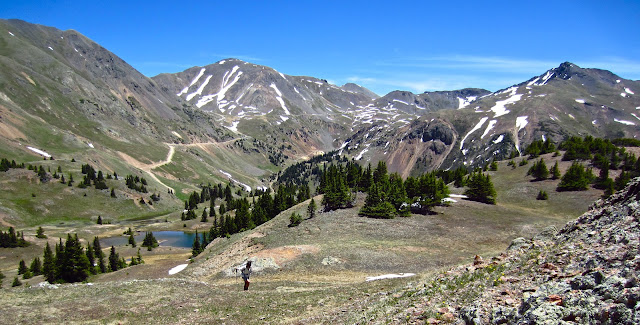 Then a sign/lesson from Sara N. Dippity, if not God Herself. If we had succumbed to the gale, turned back, we would have missed the prize. Prizes come to those who persevere. It made me wonder about all the times I threw in the towel, what rewards I might have missed, what wonderful thing(s) were just one or two more steps away. I'll never know, but today, on an unprotected ridge above timberline, I saw what I would have missed.

Ptarmigan. A pair of Ptarmigan, male and female. I've seen Ptarmigan before but never this close. They must have had a nest for they would not leave and let me approach to within a few feet. Unfortunately, I couldn't get a steady shot in the buffeting wind. I signaled Bobbie with a finger to my lips, "Shhhh." They allowed us to circle and move to within reach. I shot video, which I will share with you at the end of this post. It's as close as you will ever come to touching a Ptarmigan. 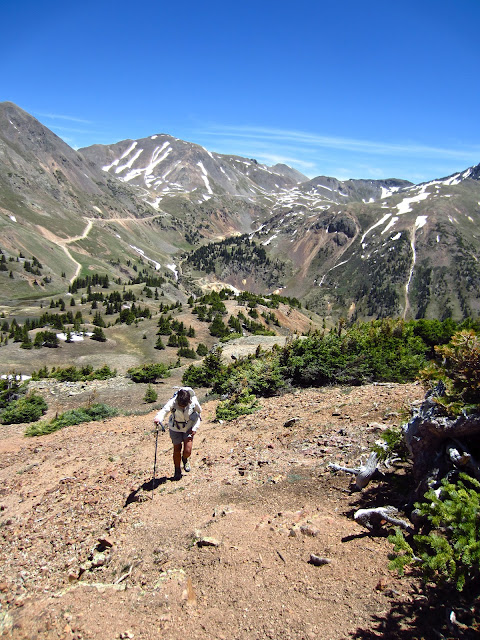 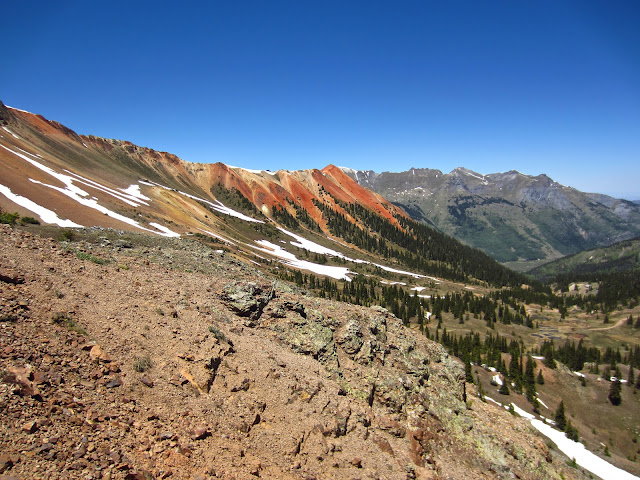 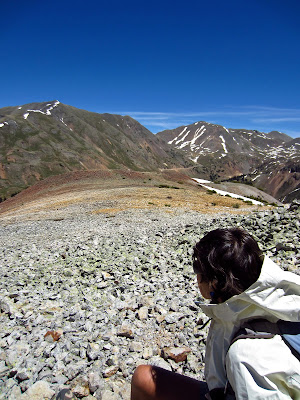 We pushed on, gaining the hurricaned ridge, to the "failsafe" point of no return. I gave Bobbie the option to bail... to down-climb to Corkscrew Gulch Road, find shelter and wait it out while I tried to summit. No answer, just deliberation. She could be off the ridge in 15 minutes... yet she was so close to a place she had never been before, a summit to boot. Would Bobbie let an ugly wind blow this opportunity away? "I'm going to keep going," she said. "Are you sure?" As if to test her resolve, a perfectly timed gust almost blew us both off the ridge.

We plodded into a crosswind so fierce... drunken, awkward, wide-legged... on loose ankle breaking rock... looking, no doubt, as if we'd just left "Margaritaville."


A false summit prompted an audible moan of protest. "Almost there," I screamed. Finally, we claimed the hump in the backbone. The Orange Dragon was ours... its serpent like tail curving into The Crevice below. I was thrilled we had made it... together.  I know how Bobbie loathes wind; we both do.


We ended up making a loop, up Grey Copper Gulch Trail, down Corkscrew Jeep road. I will never climb Red Mountain number one in the wind again. I've been there, done that. But if it's windy, and I'm close to a new summit... a place I haven't been... I'll keep going, and guess who will be right behind me.


Below is a four minute video featuring the Ptarmigan we stumbled across. Notice how they blend into the rock, how hard they are to see. In winter the Ptarmigan's feathers turn pure white. On a snowy backdrop they are nearly impossible to notice.
Very Cool Birds, and "beautiful."

Posted by Box Canyon Blog.com at 8:44 AM