RV Lifestyle Overtones and Philosophical Parallels Garnered From "Jitterbug Perfume," Of All Places


And I thought Elmore Leonard was crazy... till I began surfing the rapids of Tom Robbins' Jitterbug Perfume. His off-the-wall pen leaks inconceivable whacko metaphors, bizarre characters and a storyline that feels like something hatched from the locked-down wing of a Coo Coos Nest, blurring the razor thin line between brilliance and insanity, freedom and straight jackets, war and peace.

It's easy to envision Robbins as a mad scientist writer, working alone in a disheveled laboratory at two AM. He sits on a wobbly three legged stool, stooped over a messy table... plying through freaked out hair with one hand while jotting lines pulled from scary Steven King recesses of an over-wired brain with the other. This, amidst shattered test tube glass, the funky aroma of uncleanliness, and beakers simmering a toxic goo whose vapors take the form of an acrid purple haze that hangs in the air like tattered velvet drapery, the kind that carries the scent of an entire vaudevillian decade in its folds... an aromatic confluence of cigars, cigarettes, booze, and easy women. Like most mad scientists, Robbins is either insane, or insanely brilliant. Either way, he's insane.


The "brilliance" is in how Robins manages to weave a tapestry of wisdom throughout a ludicrous storyline... loopy etchings about a "Mad Mad World" quest for ingredients to brew a magical elixir, and bottle up the world-turning scent of lust.


After fifty pages I was ready to give up again, and put "Jitterbug" back on the shelf for the third time. But when familiar philosophies of Life and Living begin dribbling from the lips of odd-ball characters I could not in the beginning grasp, let alone, identity with, I waded on... deeper into "Jitterbug's" canyons and inky rapids... determined to see where-oh-where in the hell Robbins was going to let me off. I assume it will be someplace in the middle of nowhere.


It's reassuring to know that someone else frequents the same mental playgrounds as me, even if he is "mad." Robbins pokes fun at politics, religion, war, sex, love and marriage with a pointy little stick not unlike my own. This time around, I will lay this novel novel to rest completed, with all it's absurd, but believable, characters... one's that can be found in big cities like New York, or really small towns like Ouray.

Take Alobar, for instance, a former king turned pauper turned aging fearer of death turned philosophical accepter of Life... a womanizing cradle-robber, but otherwise, an overall well intentioned human being. He waxes poetic to his young-enough-to-be-a-granddaughter girlfriend, Kudra in something of a soliloquy, praising his new found "religion" of meditation. Then he rails against the high priests and almighty Christ, about having to live amongst such religious wretches... fear mongers that control the masses with scary retributions, the hellfire kind that indentures them to bland lives absent from (sinful) pleasures. Listen as Alobar argues that a "complete life" preempts a perfect one.


"...(it) soothed my frayed edges (meditation) and left me floating through life like a toad bladder in a mountain stream... maybe it is that I long not for the perfect but for the complete... there is something incomplete about a life that is dedicated to escape from life. They (Woden, Shiva, Buddha, Jesus) teach that much of existence amounts only to misery; that misery is caused by desire; therefore, if desire is eliminated, then misery will be eliminated... There is plenty of misery in the world... but there is ample pleasure, as well. If a person foreswears pleasure in order to avoid misery, what has he gained? An empty neutral existence... (the) nothingness of the void... To seek nothingness is worse than defeat... Poor little babies... so afraid of pain that they spurn the myriad of sweet wonders of life so that they might protect themselves from hurt... I cannot believe that the most delicious things were placed here merely to test us, to temp us, to make it the more difficult for us to capture the grand prize: the safety of the void. To fashion of life such a petty game is unworthy of both men and gods."


Wow, this "sermon" sounds familiar... it definitely has RV philosophy overtones of "going for it" and living life on one's own terms. Maybe Cowboy Brian, Alobar and me are long lost triplet sons from different mothers. Alobar kinda makes me want to step out of my cow pattied pasture and hit the road... do a little "pleasure seeking" of my own. But where could I possibly go this time of year that would out-please Lovely Ouray? And truly, if I'm perfectly honest with myself, and you, my friendly readers, playing full-time tourist eventually becomes a disconnected bore, more than staying home and playing in my own backyard (Winters excluded, of course).

Maybe I better go scratch my itchy hitch with a Clear Lake and mountain stream. Maybe a few wildflowers will reset my mad, mad mentality... the temptation to run away when a wave of boredom, restlessness, purposelessness, mediocrity or a treadmill time-clock thunders onto my "beach." It's my beach; that's how it feels sometimes. And please, suggestions that I need to accept Jesus as my Savior, that He will fill my "holes" with some sort of Holy Spirit Silly Putty... come on, I have enough bosses and rules already. Besides, I already offered Him a deal a long time ago... that when innocent children stop dying from disease, and when the "Unjust" stop prospering at the expense of the "Just," we'll talk about my soul.


Off to work now... got my "Life Is Good" ball cap as a reminder that my glass is more than half full, got my guard whistle, keys, sunscreen... and a big fat Smile :))  Now go have a "Life Is Good" weekend while I go save lives at the Ouray Hot Springs Pool.
Hey, maybe that's my "purpose!" 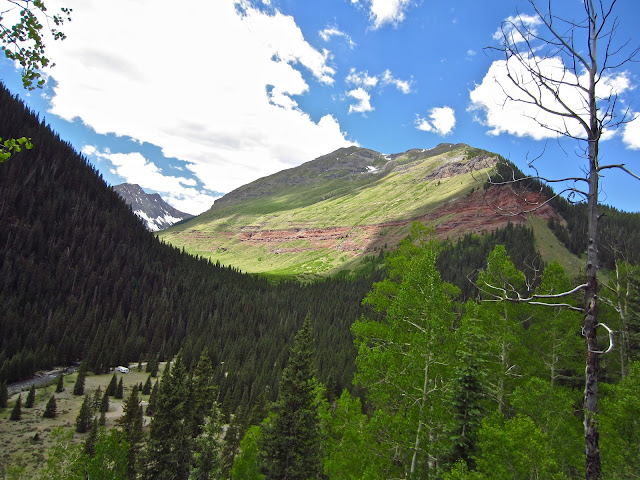 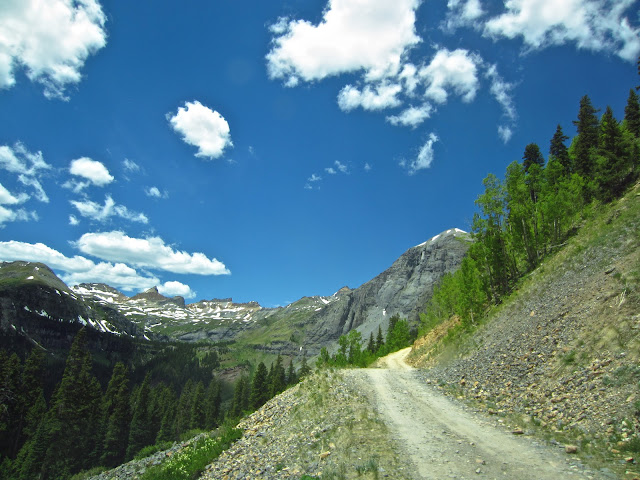 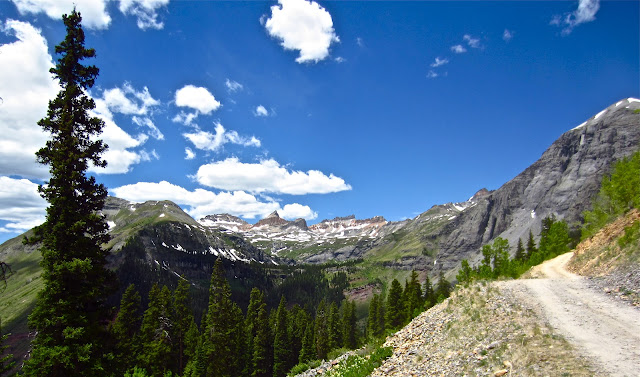 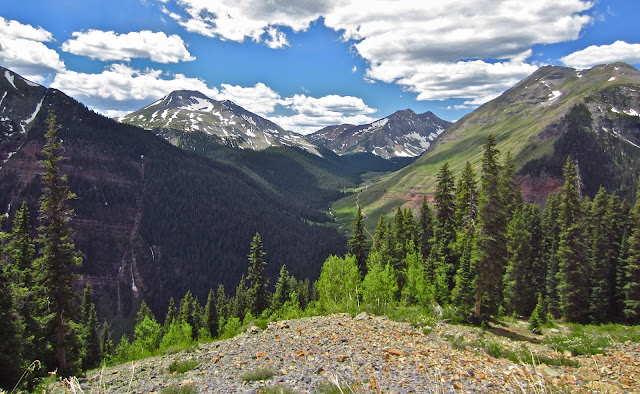 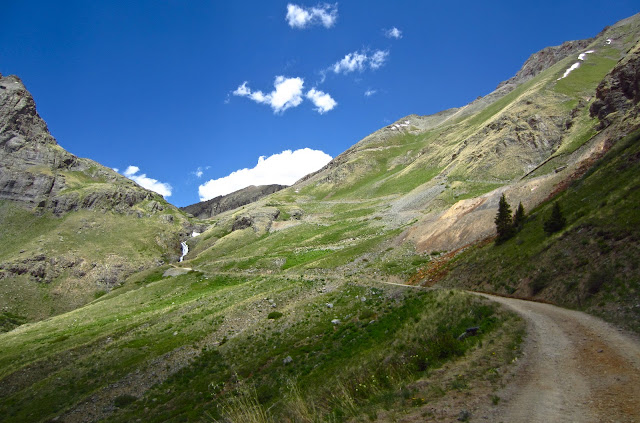 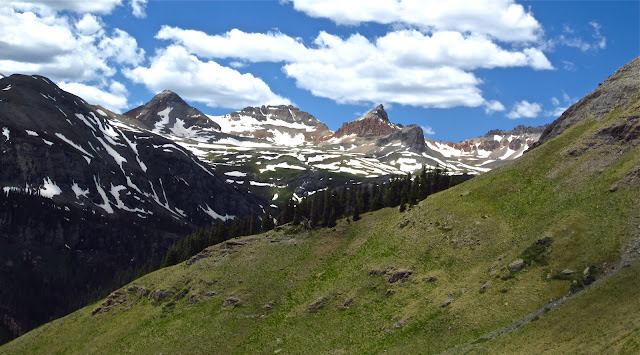 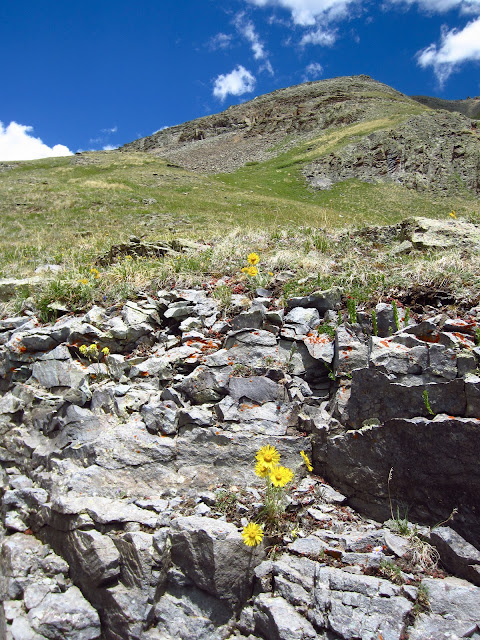 Like today's post
and/or
Photos?
Then help spread the BCB virus!
Click
Facebook/Tweet icons below
Together
we will conquer the world
of
Lazy Boy RV living
Now go for a walk with Dog.. or something :))
You'll be glad you did
and
I really appreciate your thoughts and participation!
"Hi Ho, Hi Ho, it's off to work I go..."
Posted by Box Canyon Blog.com at 8:42 AM