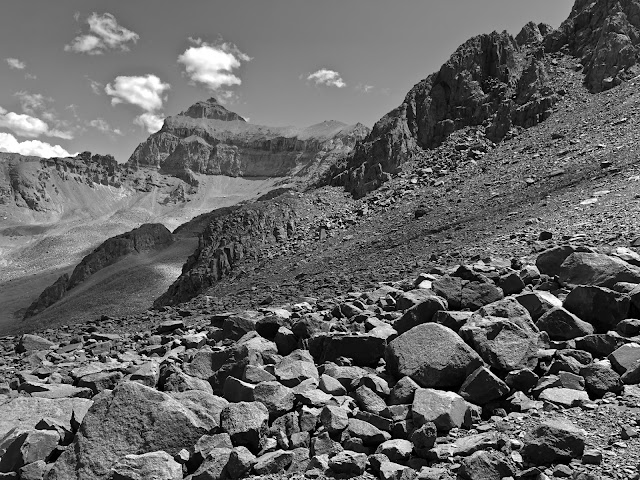 It is said that "familiarity breeds contempt." Perhaps that's why the grind up to Blaine Basin is among my least favorite hikes, that and the fact that a good 80 percent of it winds through monotonous can't-see-the-mountains-for-the-trees forest. Thus, I almost begged off the invitation to accompany Bobbie and good friend, Martha.
I needed to come up with a compelling reason to tag along for an umpteenth time redo of Blaine Basin. Don't get me wrong, Blaine is a pleasant enough destination. It's just that it requires a dreadful, suffocating, viewless woods-hike to get there (yes, I'm a view-snob).
Aside from three "balance-test" creek crossings on sketchy logs, there's little drama till you get to timberline.
I decided to set my sights a little higher...above and beyond Blaine Basin's upper level to where I could get up close and personal with Mount Sneffels North Face, maybe lay eyes on the Class 4 and 5 approaches I've heard about. If I pushed hard enough, maybe I could catch the gals on their way back down so they wouldn't have to wait for me at the car. 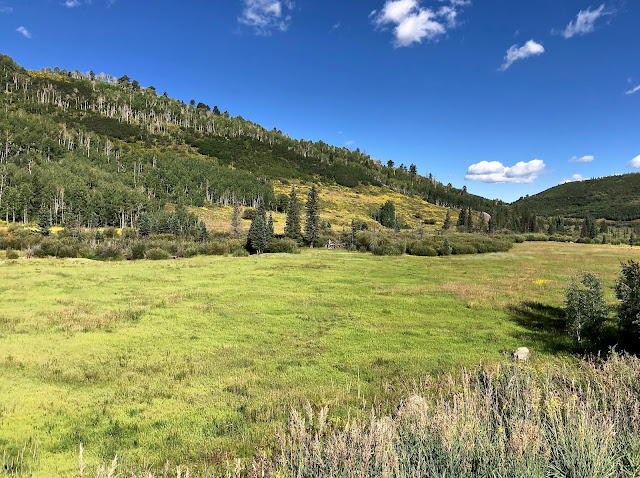 Bobbie reminded me that, years ago (maybe even decades, sigh, possibly on our first hike to Blaine) we explored another thousand feet above Blaine Basin's timberline elevation, only to be turned back by a steep-walled ridge climb up loose talus and tipsy boulders. Oh yeah...

I remembered the disappointment at not gaining the view from that ridge line and not seeing what lays beyond.  I've since explored that area extensively on Google Earth, and now know that the ridge top looks down on the two highest (of three) Blue Lakes. Caught a nice Cutthroat in that uppermost lake once upon a time, long, long ago. 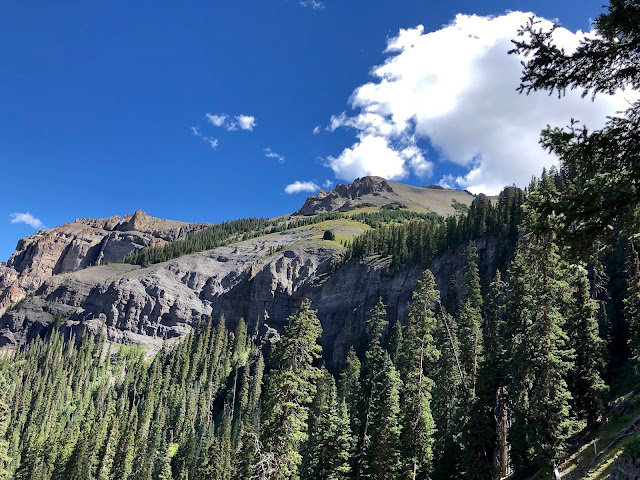 The last mile of the trail to Blaine Basin "all business," as it steepens considerably and is somewhat relentless. 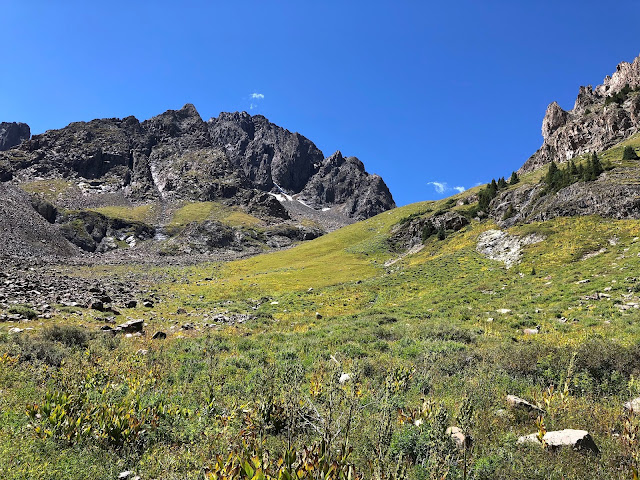 The next level up is at timberline. It affords far hundred-mile views to the northeast...towards the West Elks mountain range that occupies a vast sector of wilderness between Paonia and Crested Butte. 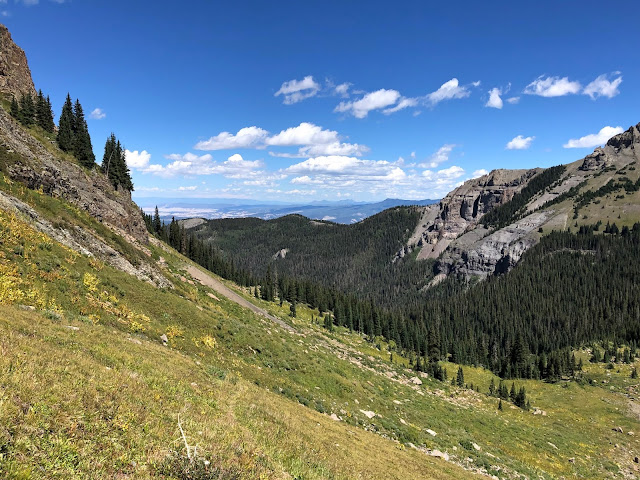 The photos don't do justice in demonstrating the precipitous incline. Let's just say it was a considerable grind, and it put my grand plan to a test of "Just how bad do you really want it, Mark?" Fortunately, the slope was mostly tundra and grass, so traction was not a problem, even sporting a heavy pack. Eventually I stumbled across a faint come-and-go trail that switchbacked it's way to the next level. 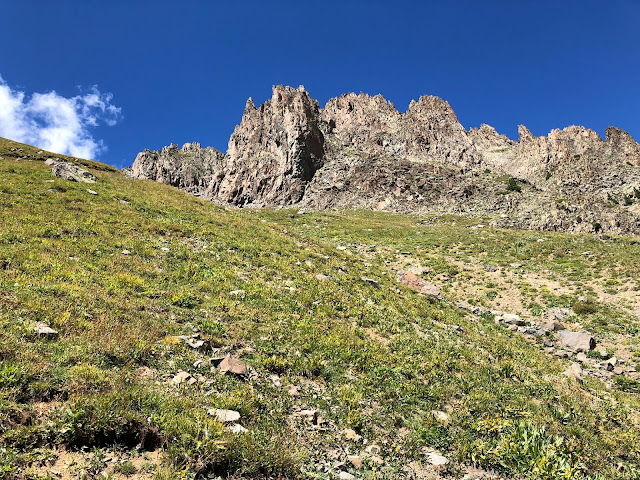 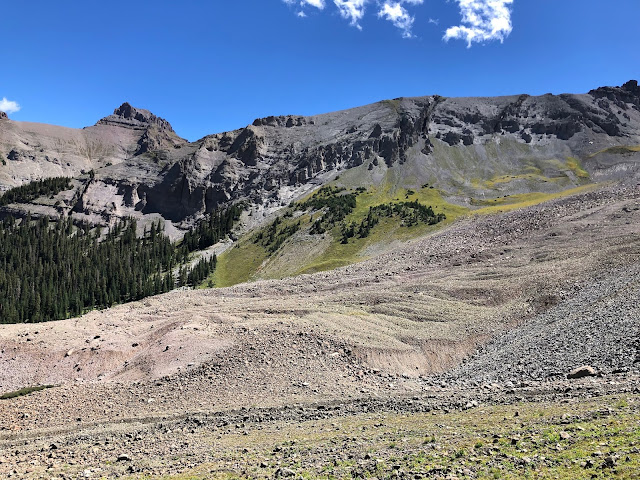 Soft tundra and grass begin to transition into a flowing moraine of talus and boulders. 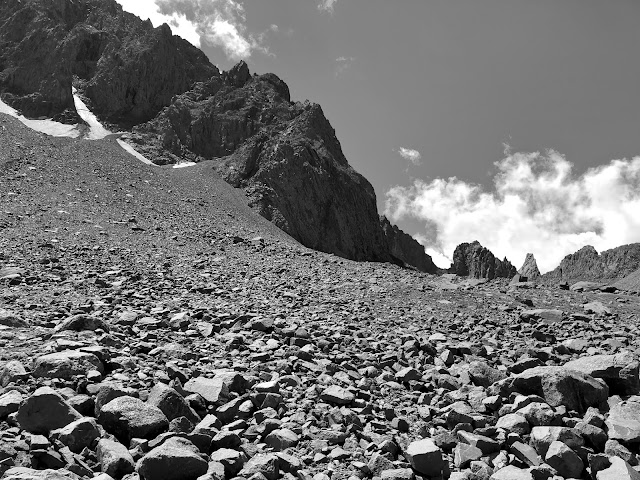 When the tundra and grass petered out, this is what's left... 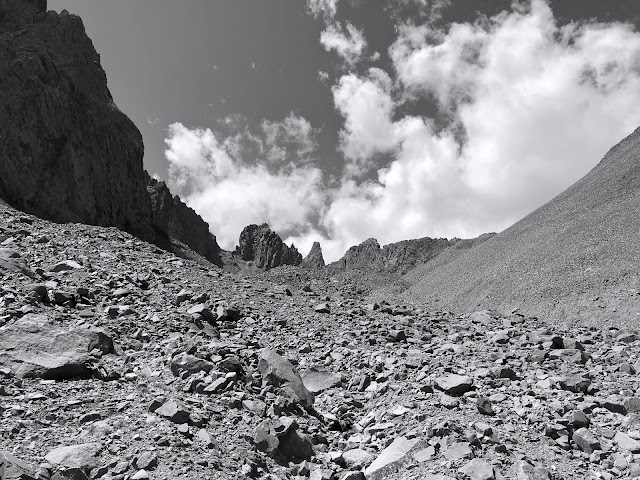 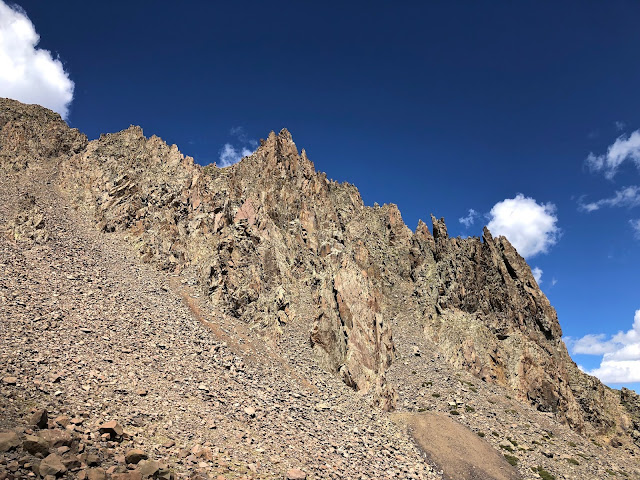 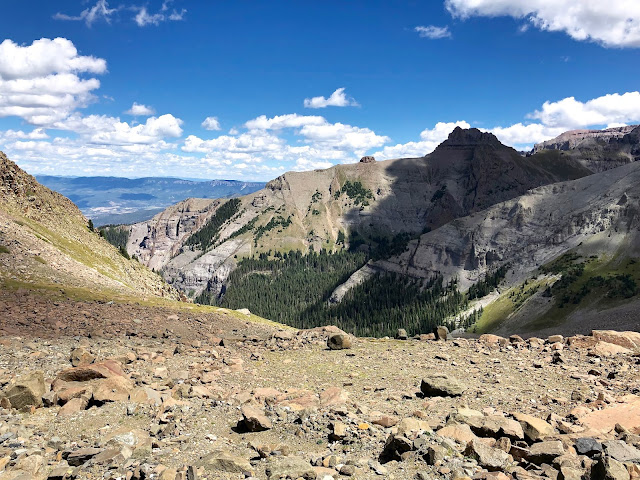 Time to head down, see if I could catch Bobbie and Martha.

Peace Out till next time,