Reflections At "The Ponds" 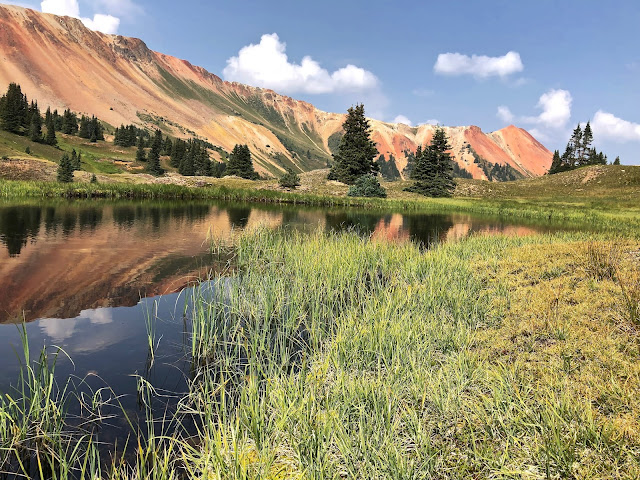 A negligible western wildfire haze softened the atmosphere , lending a pastel painting ambiance to our Red Mountain surround. Summer's lush green grass at "The Ponds" was on the wane, as chlorophyl beat a slow retreat to dormancy. In a week or two, our above-timberline mountain playgrounds will fade to slopes of tawny gold, and remind us of Ms Autumn's steady approach.
Bobbie and Martha became nervously excited as I read a couple notes left by previous hikers at the trail register.  A moose had been spotted up near The Ponds, followed by two sows with cubs in scampering through trailside woods. Shouldn't pose a problem, unless one gets careless and hikes between mama sow and her cub. 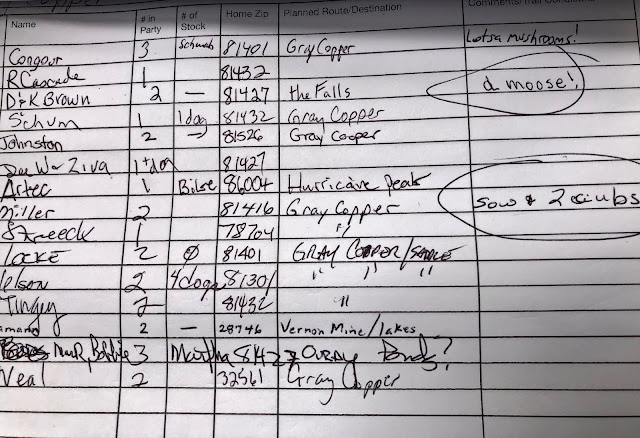 I pushed ahead of the girls in hopes of squeezing in a quick summit on the always gorgeous Red Mountain 1. But it's difficult to be on "bear watch" while power hiking, especially when rivulets of sweat find eyes and Old stumps morph into enormous bears poised to attack. 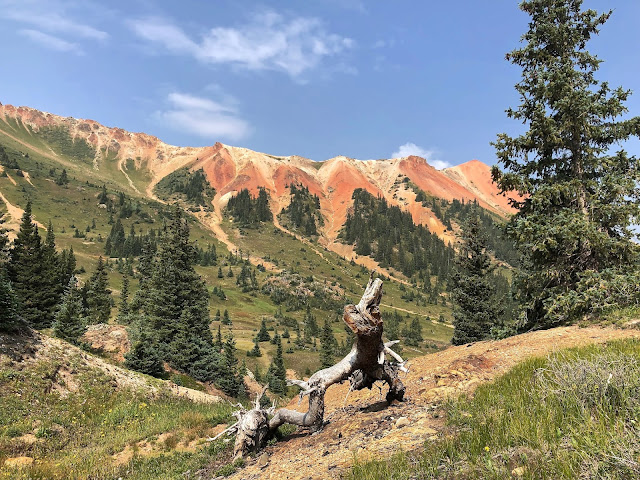 Trees suddenly thinned as I escaped the smothering darkness of forest near timberline. Finally, some daylight. I can actually see beyond my nose. Above and to the south, Red Mountain One's rugged ridge line streamed a feast of ochers, yellows, reds and orange. 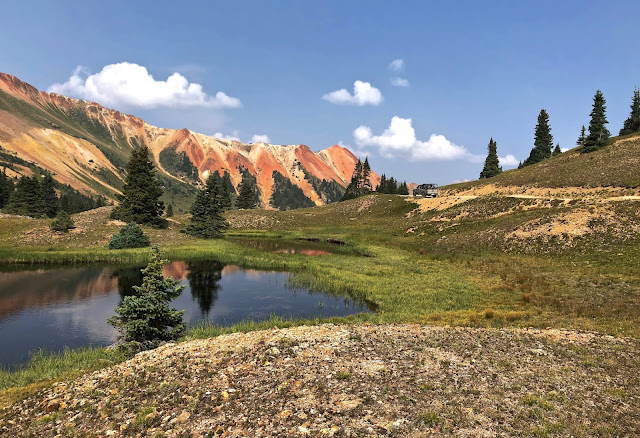 With gusts ruining any opportunity for a decent reflection shot, I munched on a PBJ while waiting for a pause in the winds. Wouldn't you know, just as fingers were coated with peanut butter and jam, the wind died. Bingo, although the camera would need a good wipedown. 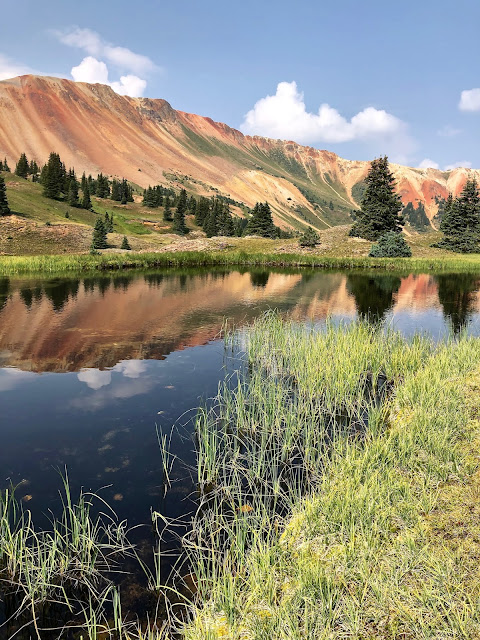 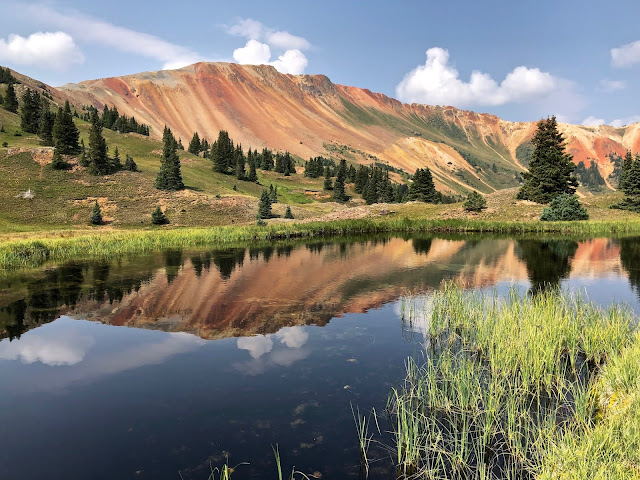 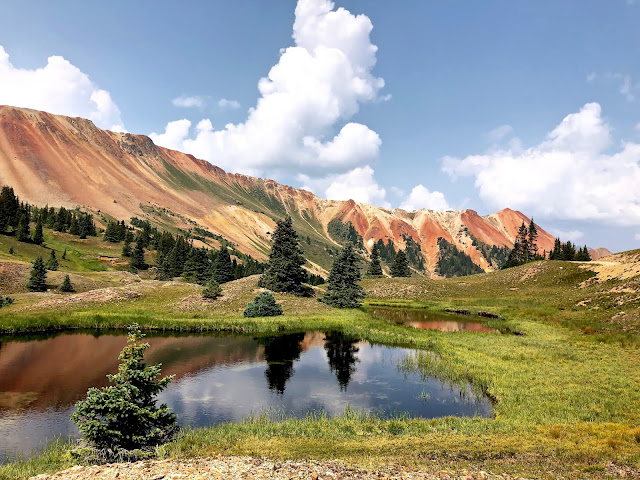 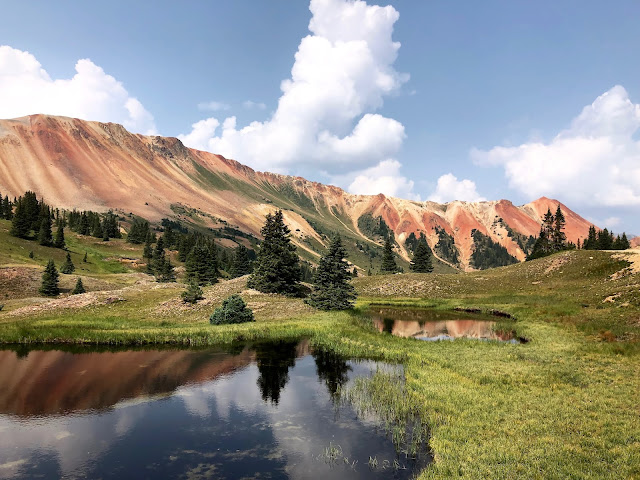 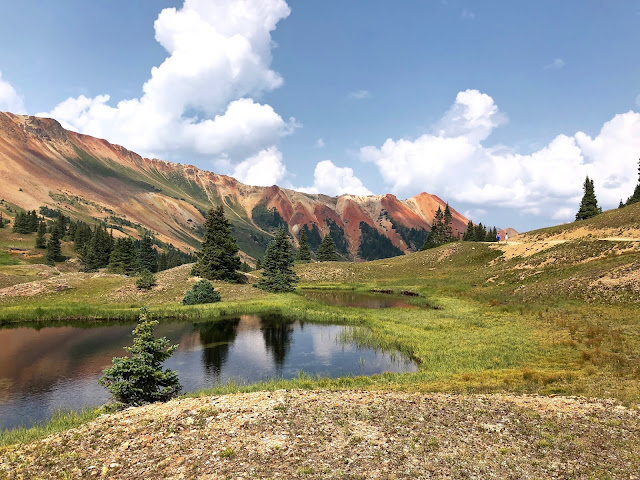 I watched a sudden thunderhead boil up over Red's ridge line. It appeared isolated and harmless enough, thus, of little concern (famous last words). I took a moment to reflect on my good fortune at living in the middle of such a recreational paradise.
After lunch the wind picked up. I knew from experience that if it's breezy at "The Ponds," gale force gusts await on Red One's summit. Not a fan of wind, I decided to sit this one out and just kick back and smell a few "roses." Who knows, maybe a bear and/or moose will amble by (not).
Peace out from Paradise,
Mark and Bobbie...and, of course, Martha.
Posted by Box Canyon Blog.com at 8:53 AM