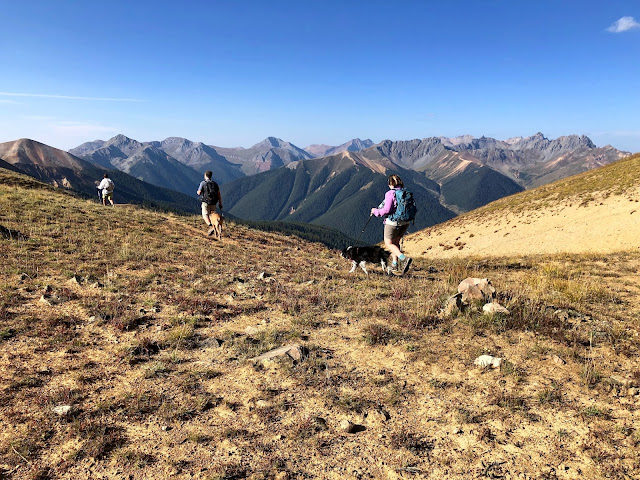 Success is not so much determined by how one carries out Plan A, as it is how one copes with all of life's Plan Bs.

We all know, anyone over 5 years old, anyway, that God laughs at our measly plans. We (Mark, Bobbie, Jen, and drone photographer extraordinaire, Mike...along with good dogs Sunday and Chester) had Planed to guide Mike and Jen on a little used 8 mile backcountry trek left over from olden mining days when pack mules were used. Bobbie and I, now experienced with all the F-ing nuances of this confusing route, volunteered to play Guide Noir for Mike and Jen (and dogs Chester and Sunday) so they could once and for all notch this trek on belts or bedposts or where-ever...or get it tattooed in bold font someplace highly visible.

In spite of previous faux pas attempts, including but not limited to, thrice times lost and an emergency SPOT call to Ouray Mountain Rescue after Jen fell off the trail and broke her leg...a rescue that stretched into the midnight hours as she had to be carried on a stretcher down the mountain and then transported to a hospital in Montrose. If you've never been severely injured enough to require rescue, being lowered miles from a mountain accident...in the dark, in manic pain, with every jostle shooting pain... to get you and your injured body part to a patiently waiting ambulance, then you can neither understand nor appreciate the organization required from experienced volunteers that risk their lives to come to your aid.

Why in the Hell would a normally sane person like Jen choose to double-dog dare fate and spit in the eye of Gawd Almighty to again attempt this same 8 hour backcountry trek that broke her body?  Well that's Jen...a military Jag who served her country and risked life and limb in middle east wars. Hoo Yah!

As for Mike, who knows the entirety of Jen's backcountry mishap, he's still eager to notch this route.

Almighty Gawd still chuckles as I write about our "Plan," a plan so long in the making (due to schedule conflicts/weather, etc.) only to be detoured once again by the annual Imogene Pass Race, which was also happening on this particular Saturday. Even though we beat the race's start gun by a full 5 minutes to Camp Bird Road, our access point, it was already gated for the runners safety. There were even guards posted to enforce the closure this year. Oh well.

So Bobbie reached in to our satchel of "Plan Bs" and pulled out Ohio Peak.

Packed and primed for a hike, Mike and Jen jumped on our suggestion to climb Ohio... a first ascent for both. Forty minutes later we put boots and paws to trail, four humans, two dogs on a mild, sunny day.

Here are highlights from our high altitude "Plan B" hike... 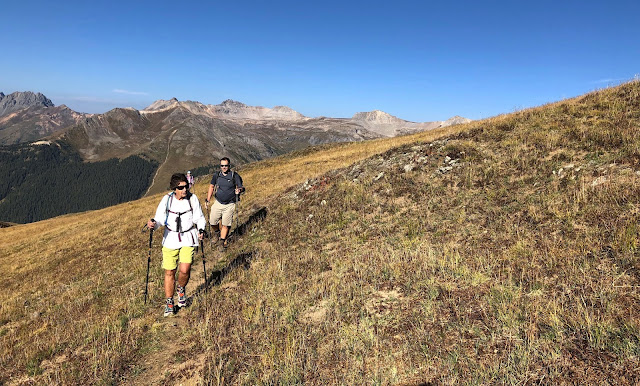 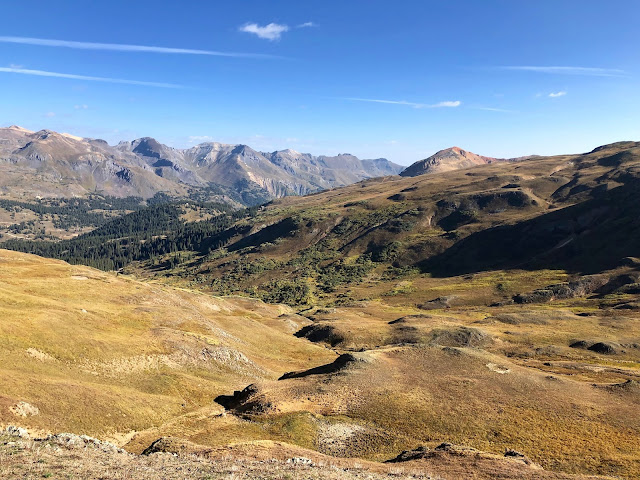 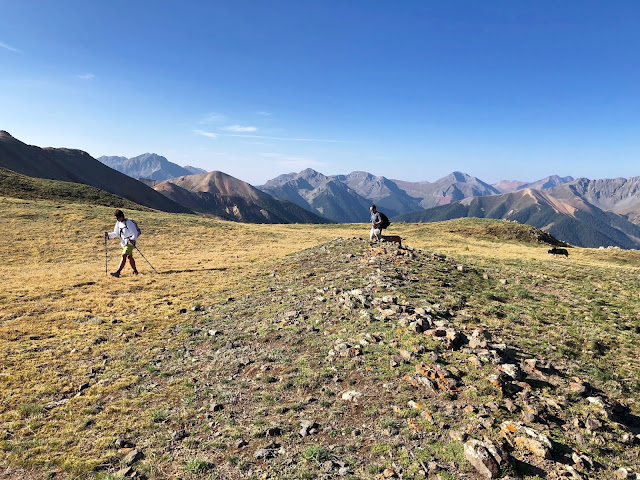 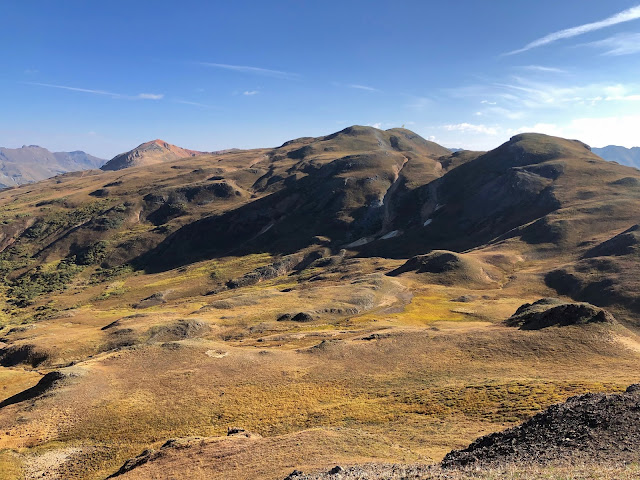 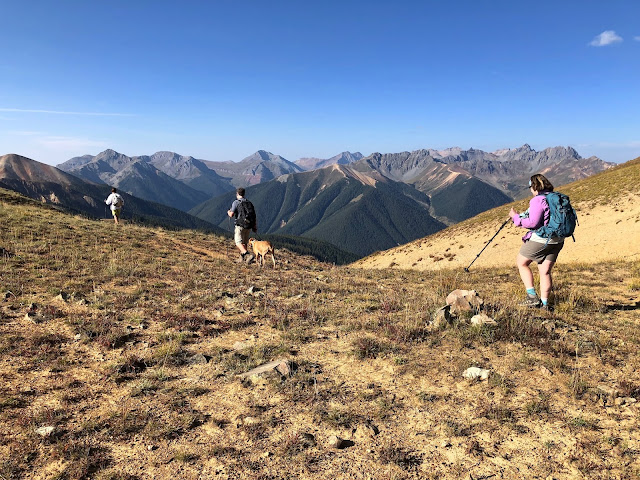 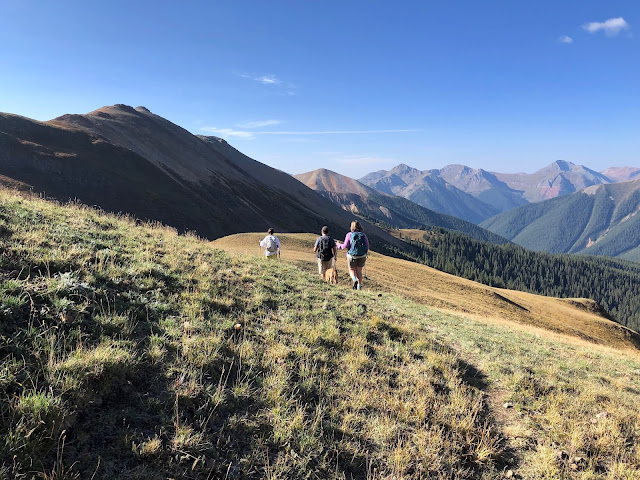 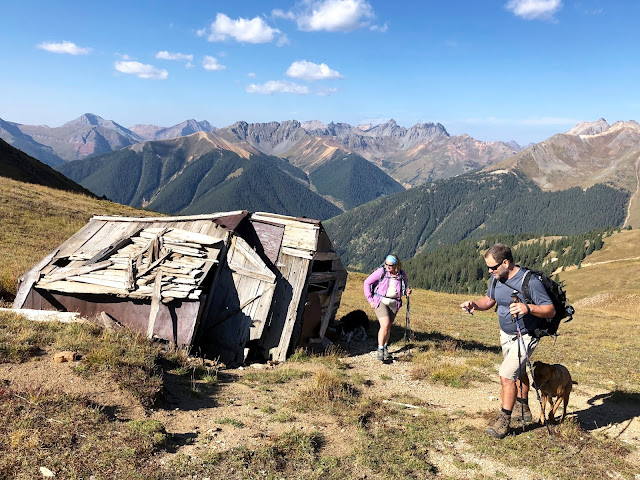 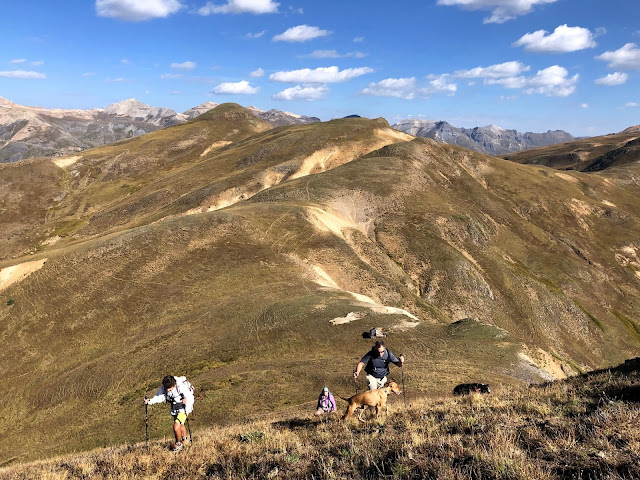 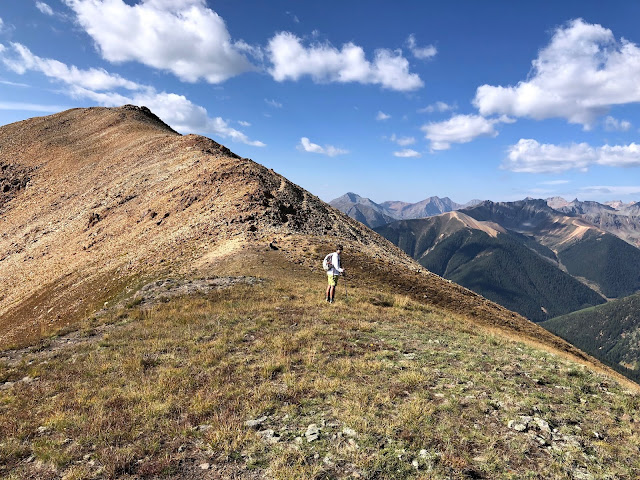 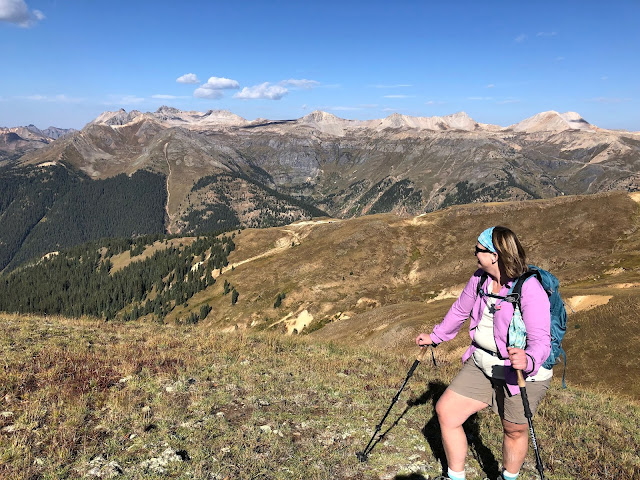 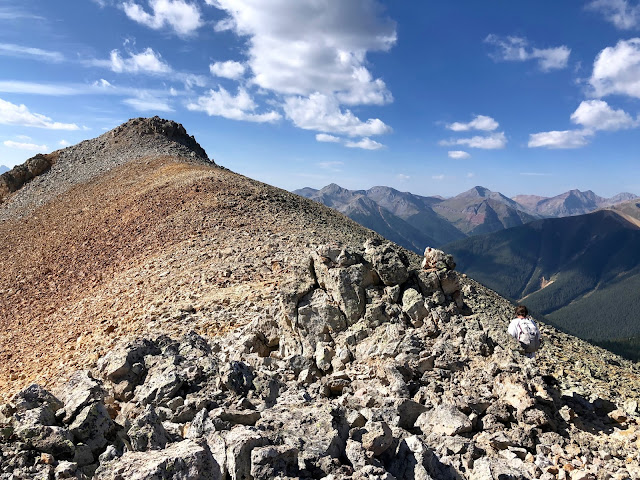 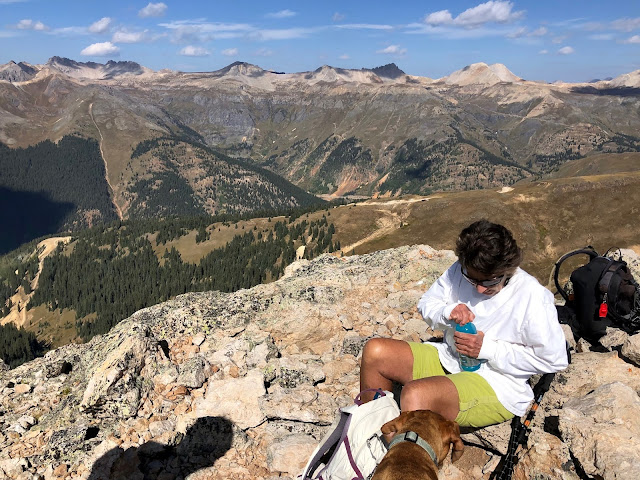 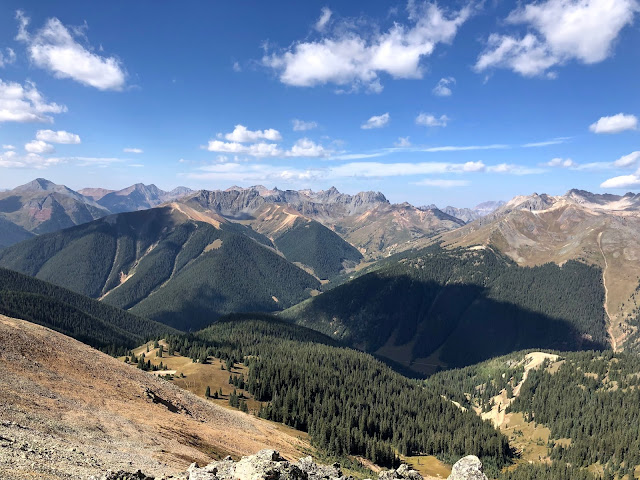 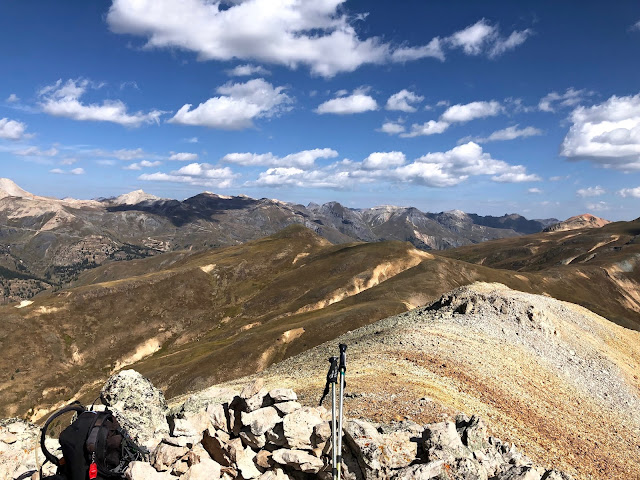 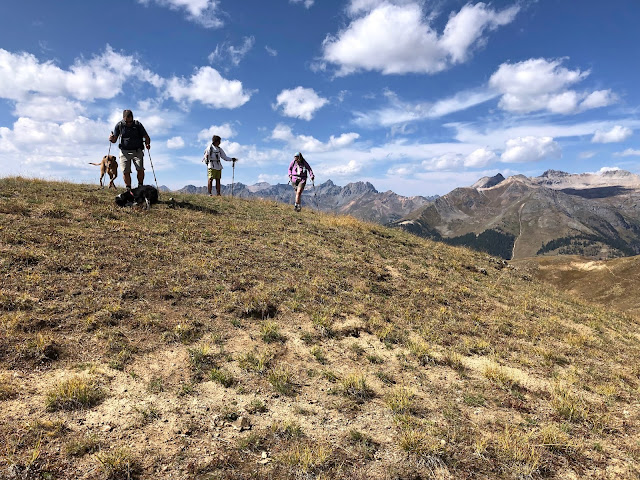 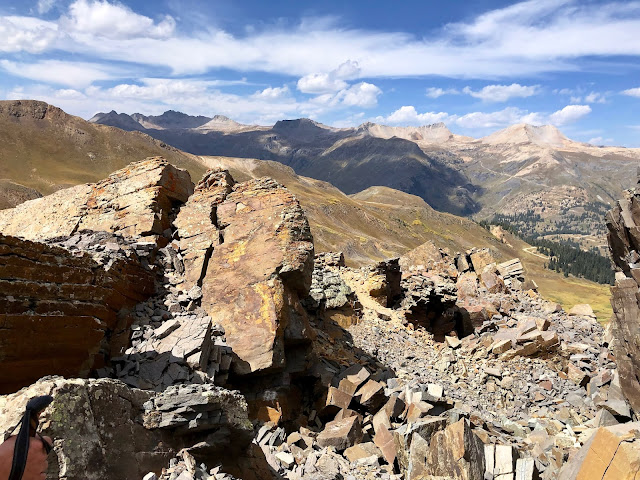 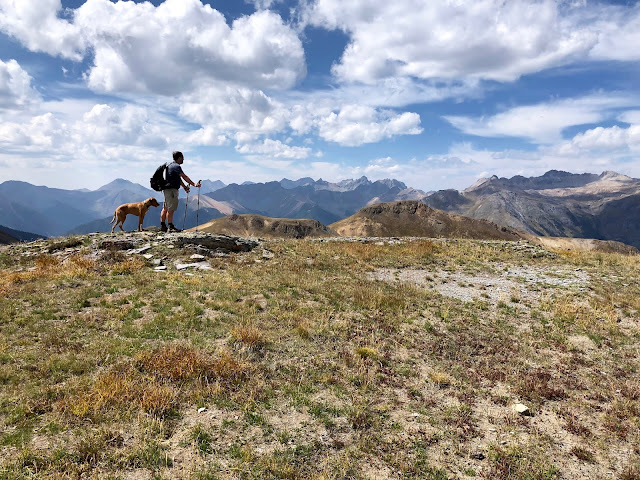 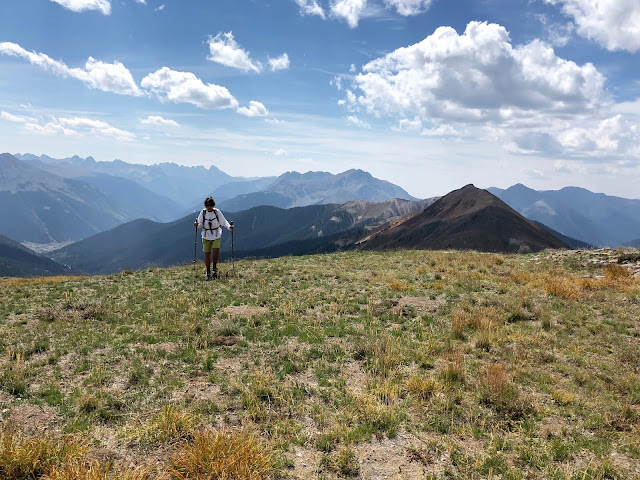 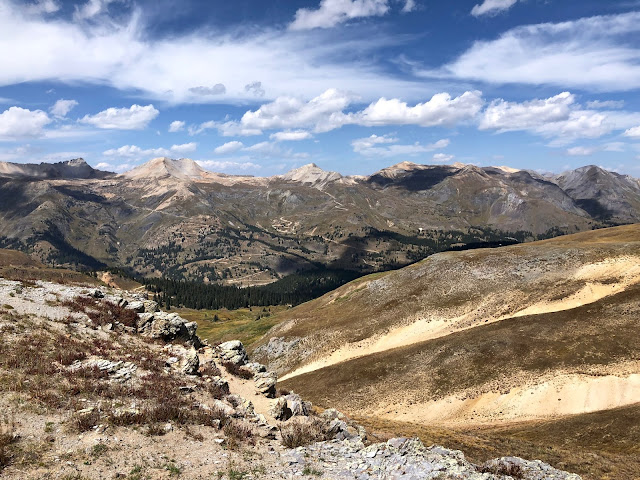 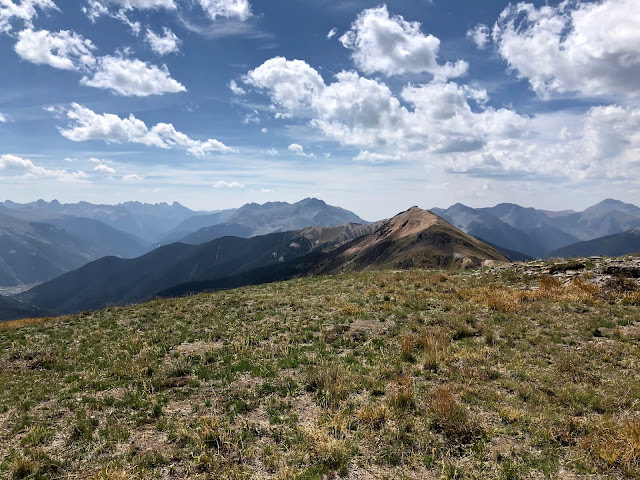 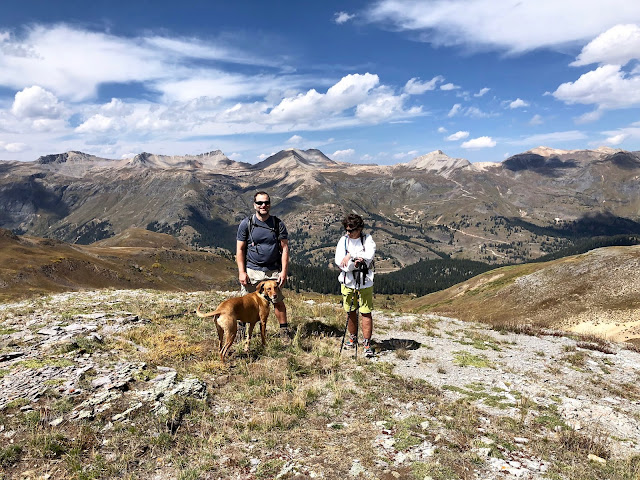 For readers out there who are curious, the Plan A hike has been rescheduled... a real doozy, so be sure to check back!

Peace out from Ohio Peak,

Posted by Box Canyon Blog.com at 7:27 AM