"A Separate Peace," and Flat Tired Of Flat Tires 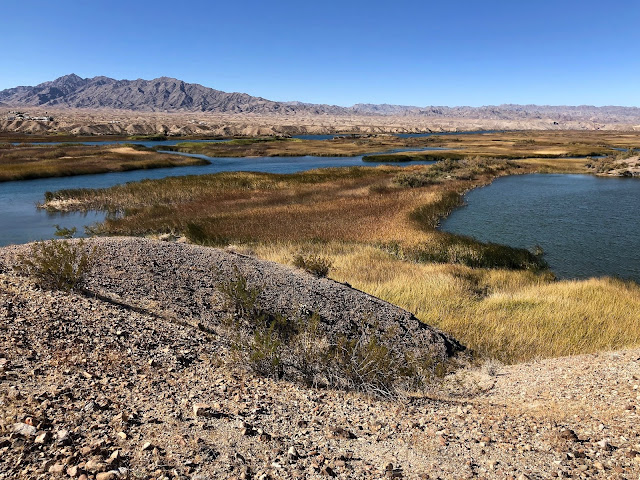 The "compromise" happens every year, shortly after Thanksgiving. So it comes as no surprise, really, till this year, when a renegotiation of previous "treaties" was agreed upon. You see, Peace requires compromise, and compromise requires putting your pretty little feet into another person's stinking shoes.
We had hoped this would be a year of sublime peace and quiet. But alas, every one and their entire extended family, neighborhood, city, decided to go "glamping" in a brand fucking new Rv. Still, we had a modicum of success, pretty much by going deeper into the wilds than 99.9% of the "glampers" would ever do. We found ourselves as of yet unwilling to give up on Zion's less trampled fringe areas, because...because, how does one top perfection?
New Dots and glampers notwithstanding, we managed several favorite re-dos and a couple of been-a-whiles...challenging outings where the "enemy" is far away and few in number. Ah, colorful, temperate, pastoral settings with hints of orange, reds, and even lavender. But even this was not enough to quench Bobbie's thirst to "escape the box," and return "home" (Enter crescendo here).
Let's face it. Bobbie loves spending a couple months of winter in Lovely Ouray...with its cold, snow, and a biting north wind nipping at her pretty polish nose. Me? Not so much. I mean, I know I need to be outdoors, yet I'm loath to gaze beyond our Jack-Frosted Imax Windows without dread and fear of overexposure to swirls of wind-driven spindrift that rise from the mountains in vaporous clouds, only to be whisked away on said winds.
Meanwhile, Bobbie is stoically undeterred by such conditions. She trots downstairs, pulls on boots and layers, fleece hat and gloves, and bounds out the door...while I shuffle off to pay penance on my Nemesis Exercise Bike in feeble attempts to atone for a genetic cryophilic aversion to death by freezing and peddling like Hell to get exactly nowhere. My blood runs thin. I blame it on Arizona and Eliquis.
Winter outdoors is seldom as bad as it looks, though....if one takes the time and trouble to dress properly, and by "properly" I mean in layers. But I'm not particularly good at wrapping myself in constricting layers. What if I encounter a mountain lion and need to run?
I always start with too many layers. Before I know it, I'm breaking into a layer-soaking sweat midway up the first sun-splashed hill. I peel off layer after layer only to walk into a "meat locker" of shade. My sweat promptly chills to just above freezing as try to re-layer with frostbitten hands that no longer seem to work. Then up comes a breeze. "Chill factors" plunge, sending my "chestnuts" scurrying on an internal quest for 98.6 degrees. In spite of Outside Jill's penchant to confuse winter as a primo season to bike, I prefer weather that's conducive to shorts and tee shirts. You can't fucking freeze to death when it's 70 degrees!
Arid-zona and Eliquis. I rest my case.
Thus, after a few discussions (and considerable whining on my part) Bobbie and I came to an agreement where she would head home from Virgin, about a 8 to 9 hour drive, and I would continue south. Since my son and snowplow driver Caleb, and D.I.L. Kelli, are not able to spend this winter in Lovely Ouray, at least Bobbie will be there to assume the plow duties, as well as tend to all the Christmas stuff. Win win. I don't know if I want to make a habit of this, especially if Caleb and Kelli come next year. Hopefully, we can actually hug and kiss each other by then :).
With Bobbie safely home, it was back to Lake Mead for me for another bike ride on the River Mountain Loop bike path. It was fraught with headwinds and hills, but I managed to do the 36 miles (from camp) in just over three hours. Oh how I love endorphins...

Then it was on to Lake Havasu, this time staying on Arizona State Trust Land which is within hiking distance of the lake (thank you to John and Charmaine for the tip). 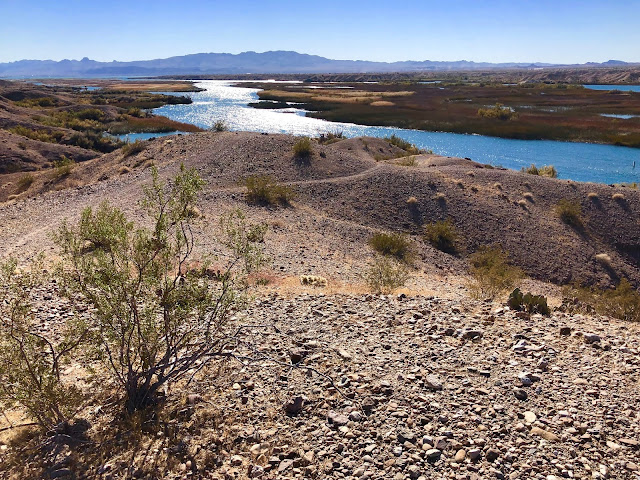 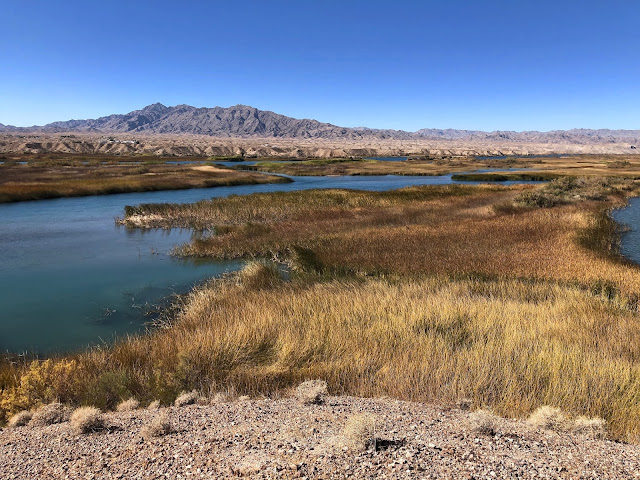 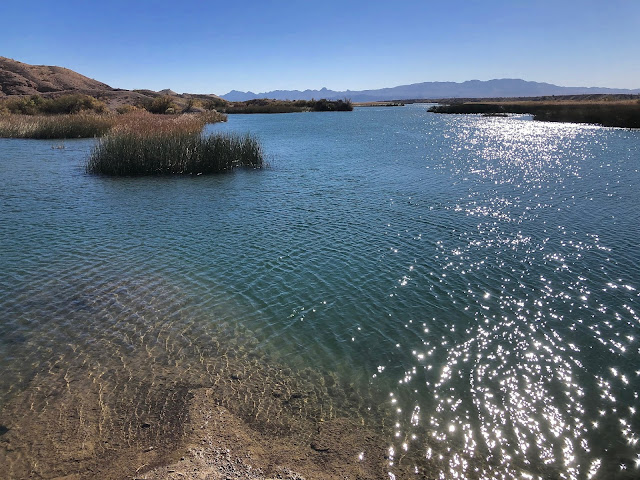 Havasu City also has a paved bike path that goes from "London Bridge" to SARA, a sizable hiking, biking, dog-walking, rodeo grounds, shooting range and remote control airplane flying recreation area. A little something for everyone.
I wanted a long bike ride, but was camped on the north end of Lake Havasu City. Fortunately, London Bridge Road had a bike lane and I was able to bike to the bridge where the bike path started. By crossing the bridge, however, bikers and walkers can access another paved path that circles the entire island. It's perfect for walking (about a 4 mile loop) with views of the lake and shoreline access. I did two loops around, then headed for the bike path to SARA, to try on some of its single track. 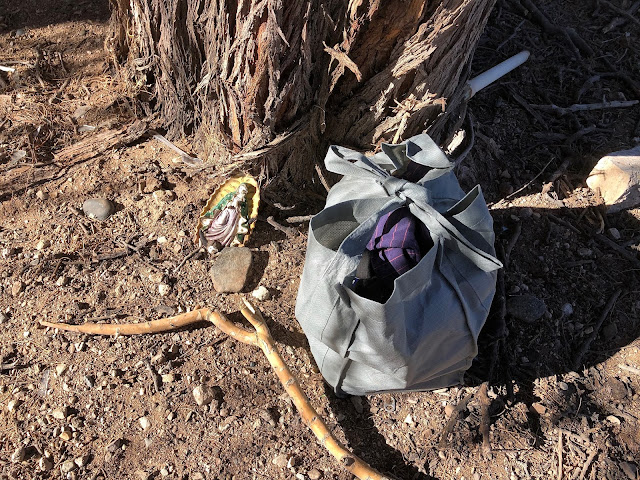 For whatever reasons (the list is long and often sad), there are numerous down-and-out people in this area. The Trust Land where I camped was populated with olden motorhomes, trailers,  vans and cargo trailers that appeared well beyond their last mile. One even had flat tires, and a makeshift attachment made out of old pallets. It was obvious that some people had been staying there a long time. Nobody checked my permit while I was there, so why not. I didn't take any photos for obvious reasons...there but for the grace of God, go I. 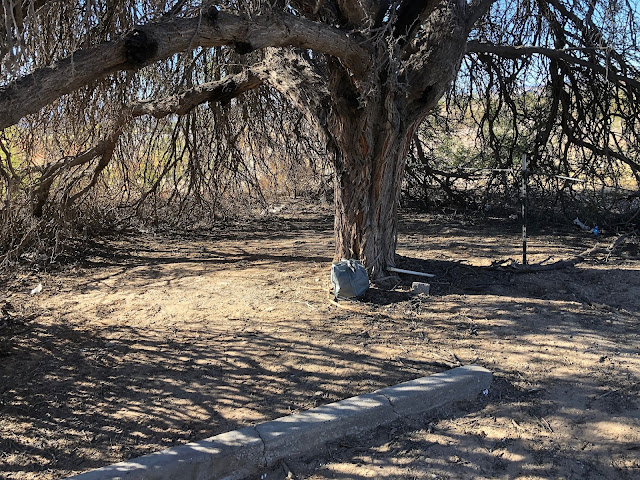 Just before circling the island I need to make a "pit stop," and circled out of sight behind some trees. Under one tree it became obvious that someone was staying/sleeping under it. There was no litter, and the ground was well groomed...as if raked with a branch or some makeshift apparatus. Near the trunk was a bag of possessions...a blanket, pajamas...a doll that appeared to have religious significance. Not much. I didn't see anyone around so it's tough to know the story. I guessed it was a female...perhaps a victim of the "times." In a society where the majority of people live paycheck to paycheck, most are just one paycheck away from sleeping under a tree.

I made quick work of the two loops around the island, then found the paved trail that took me to SARA. 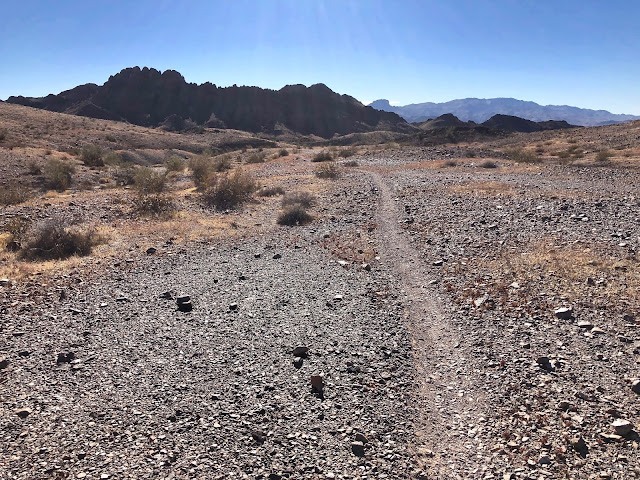 I rode from Camp out to SARA 3 times while at Havasu. Between goatheads and cactus, I managed to have 4 flat tires...this, with sealant in both inner-tubes. It was fortuitous that the last flat happened in front of a bike shop. Weary of changing flats and patching tubes, I pushed my mountain bike over to the shop, where they agreed to get me in and back on the road.
I mentioned to the teenage kid that worked there all my sad flat tires stories. He said I should go "tube-less," that he hadn't had a flat in four years. Hell, I can't go one week without getting a flat in Arizona. He went on to explain that "sealant" does not work very well in tubes, and then suggested I make the switch to tube-less, where sealant works much better.
Well, I couldn't hardly do it now, I told him. These tires are over a year old and probably have 20 holes between the two of them.
Since the tires are about worn out and need to be replaced soon anyway, I'm going to try it. Even if I do have flat tires in my future, they are easily fixed by inserting a "plug," which means I won't have to remove the wheels from the bike or break down the tire anymore. Just plug it and pump it. We'll see...
Now a few photos taken from SARA's single-track... 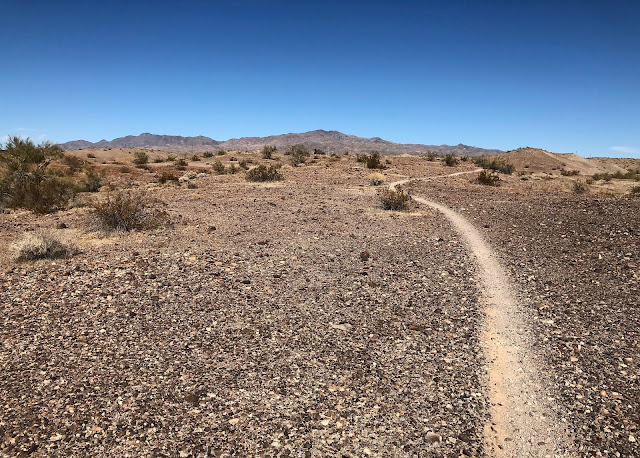 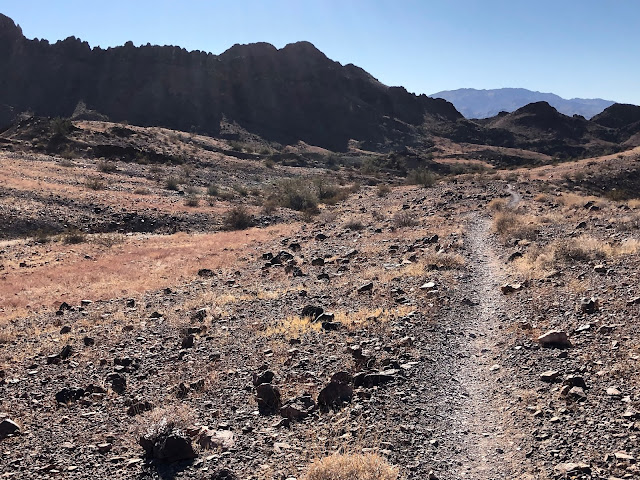 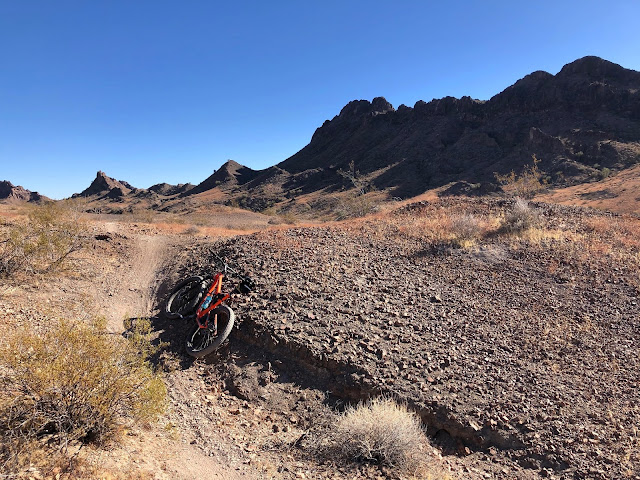 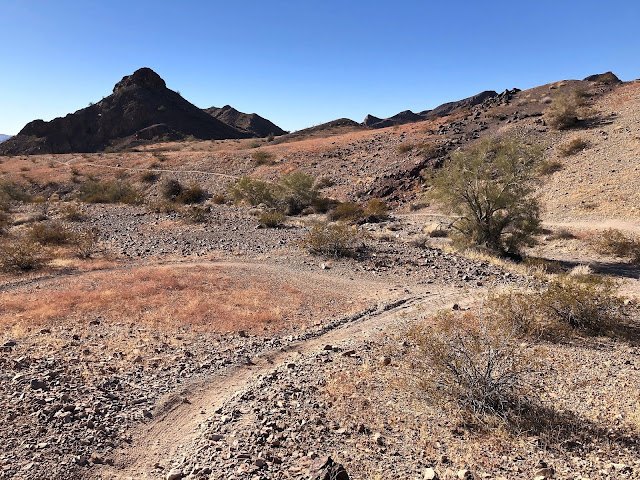 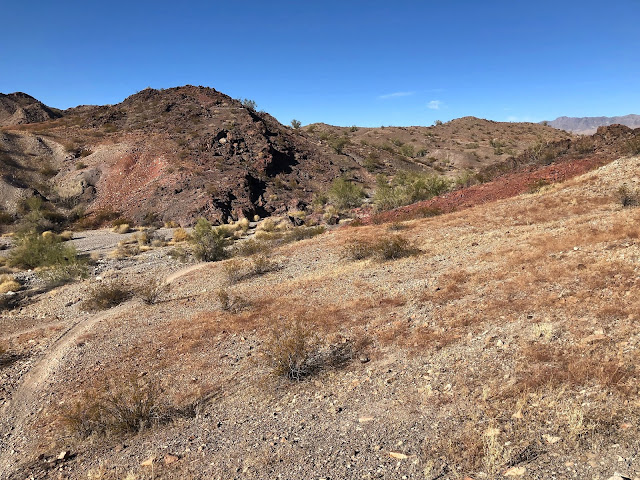 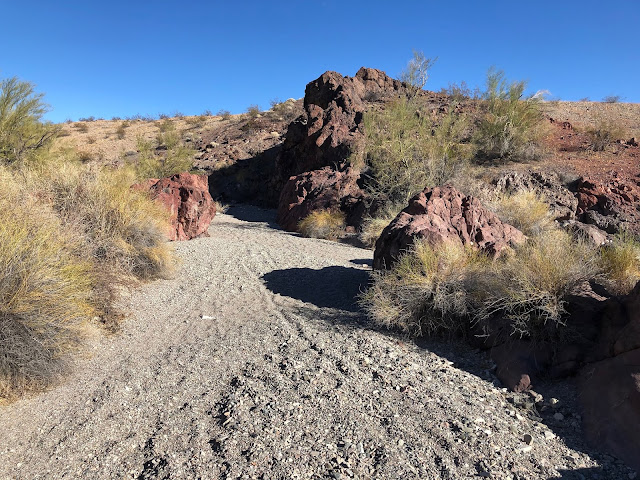 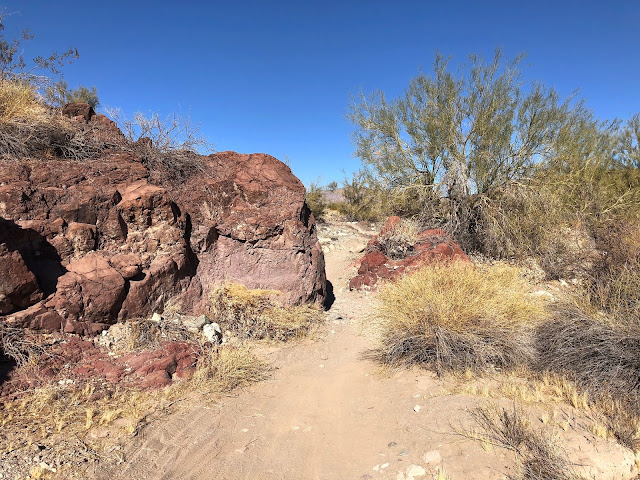 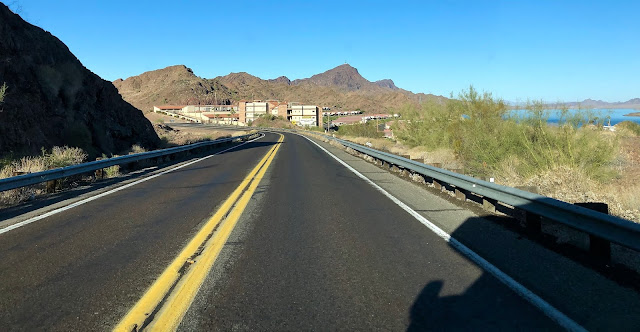 Time to move on down the road...
Peace out,
Mark