A little change today, makes a big difference in tomorrows...
Speaking of "change and tomorrows," I caught up with Pal Chris at a BLM dispersed camping plot of ground. It's due west of Phoenix...the still-swallowing-up-desert-and-groundwater-like-there-ain't-no-tomorrows megalopolis. Aptly, the BLM plot was tagged with the moniker, Saddleback Mountain (see above photo).
There are endless well-spaced camping spots, all with exceptional views of the bold and moody Saddleback Mountains that change minute to minute according to light and shadow. 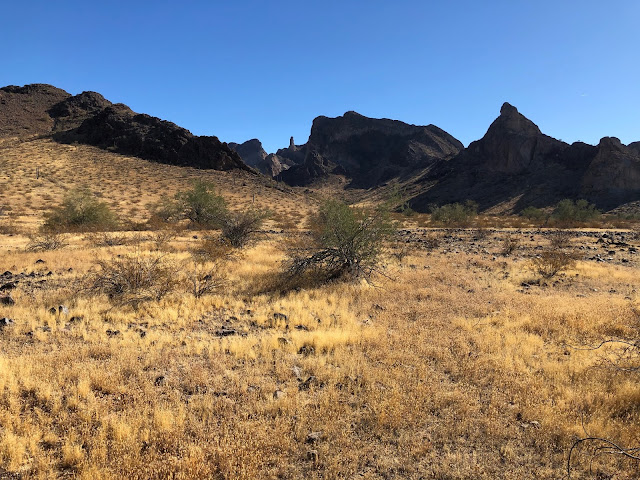 It was our job to conquer...ok, how about put a dent in...this sumptuous sum of new "dots," laid out like holiday buffet. Honestly, it looks like it fell from the pages of some random back-issue of "Arizona Highways." 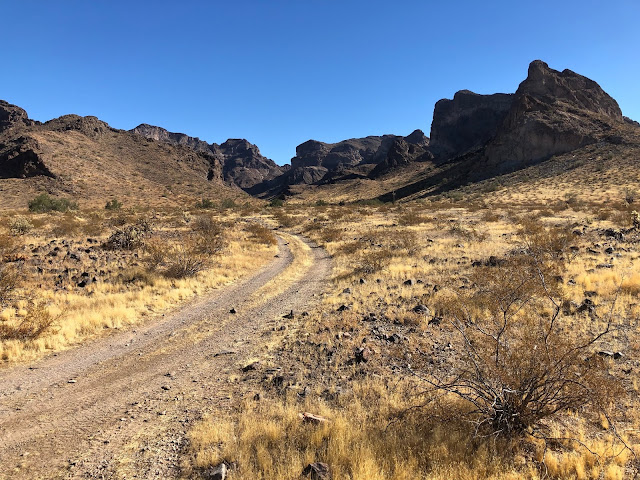 Saddleback was a familiar stop to Chris, one that's on his yearly itinerary. Thus, I just came along for the "ride," and let him choose the "challenge de jour."

Chris started with a hike that we hoped could be turned into a loop. Loops are always preferable to Out-n-Backs, with a few notable exceptions, of course.
We couldn't have asked for a better day. Feathery clouds streaming across Arizona's cobalt dome and temps that moderated from goose-bump cool to t-shirt warm. Warm enough for snakes. 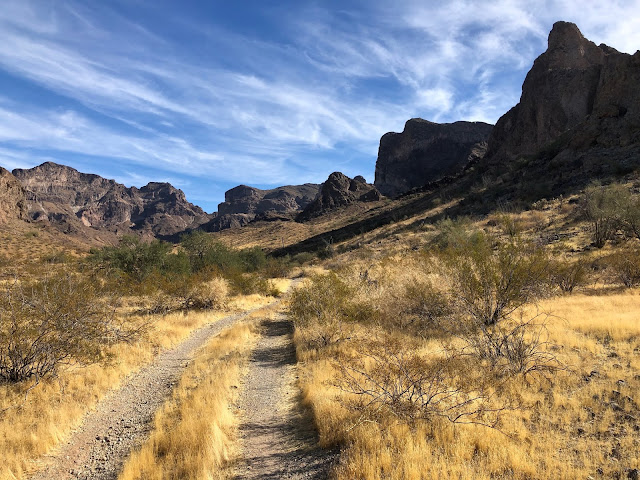 We stumbled along on rocky roads, then hung a left on a side trail that headed into a heart-of-the-mountains canyon. Our backroad, as most in Arizona do, disintegrated into a wash. No big deal, till the wash squeezed down into narrow path of pokey-thorny vegetation that drew blood faster than a thirsty vampire on halloween. 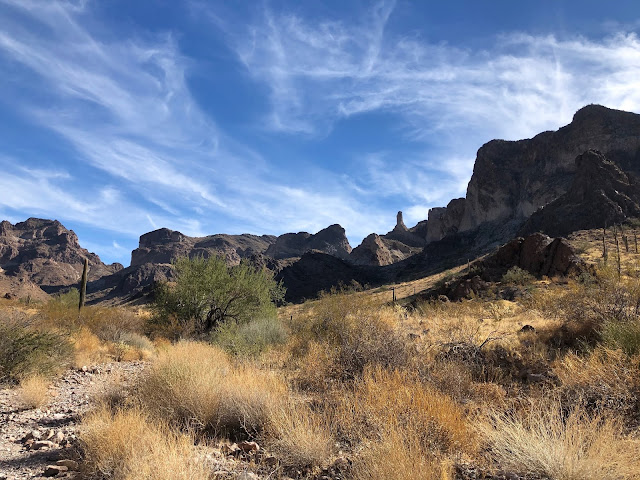 As canyon walls closed in, it was obvious that this hike was destined to end up as a bushwhacking scramble. Chris put his gators on while I looked on with envy. Gators protect shoes and socks from accumulating all those aggravating, needle-like seeds and sticks that drives a hiker stark raving mad enough to take the Lord's name in vain. Guess who's doing all the swearing? 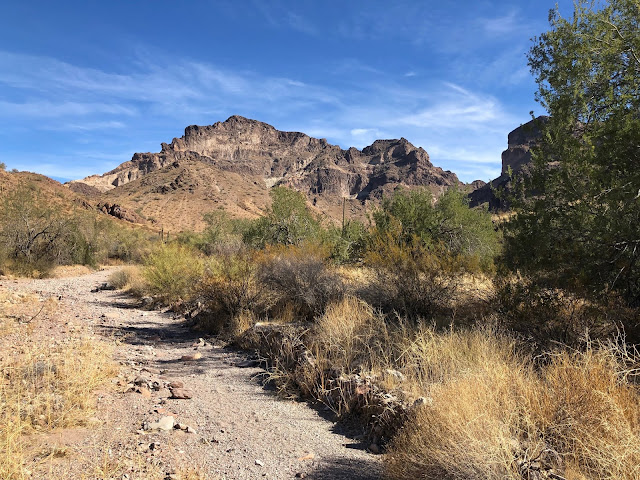 Like my high school girlfriend's mood, our fickle wash swung to extremes, a gleeful super highway on minute, a wretched narrow tangle of thorns the next. But who would complain on such a day! I'll give you two guesses, the guy without gators. 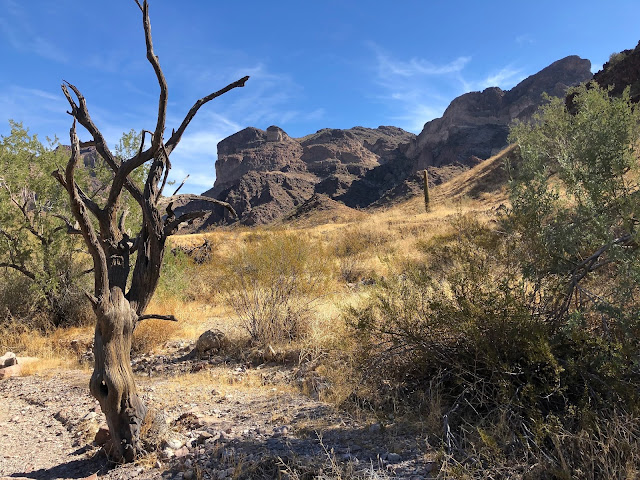 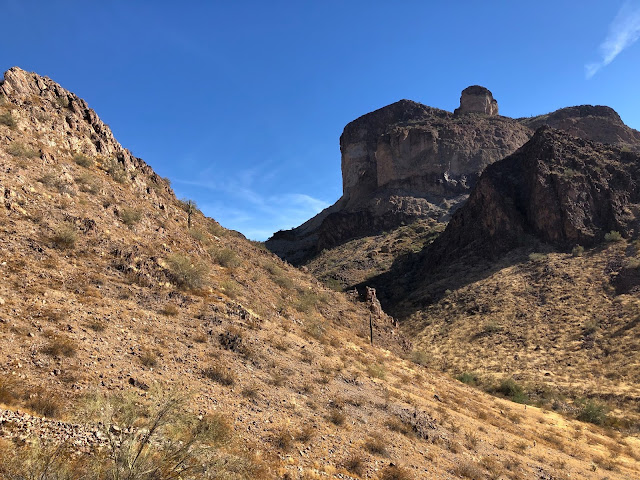 The wash disappeared into darkness. But, it was headed away from camp...that and we'd need ropes to continue going the wrong direction made us rethink our plan, or lack of plan if you will. I followed Chris as he bushwhacked up toward a saddle, not the saddle, but a saddle nonetheless. From there we could have a look-see for a route back to camp. 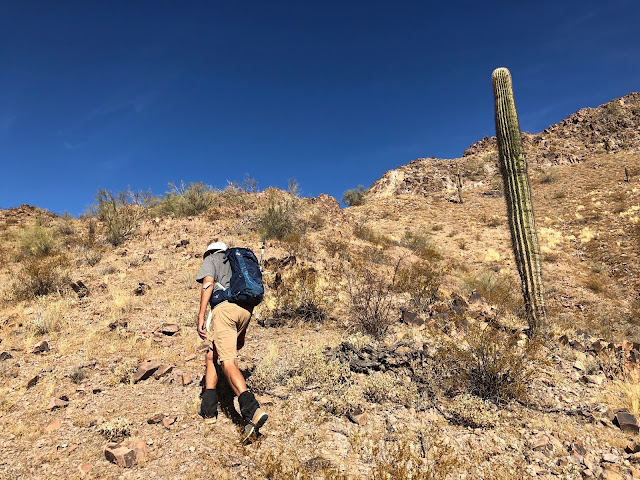 Let me interject something right here: When granite mountains begin to erode and crumble, it leaves shards of razor-like rubble that will make you bleed like a hemophiliac on Eliquis. Even if you so much as kneel down on it.

Of course we made it back to camp, cause you are reading this.
I felt much better about a bike ride for our next outing. At least my legs are off the cursed ground and, hopefully, out of reach of venomous reptiles and sticky pricky things. It was going to be a warm snaky kind of day, too. But we will be on roads, I reasoned, not bushwhacking. Right...
The mountains cheered up a bit in the cloud-filtered light of morning. Not nearly as ominous as afternoons.
j 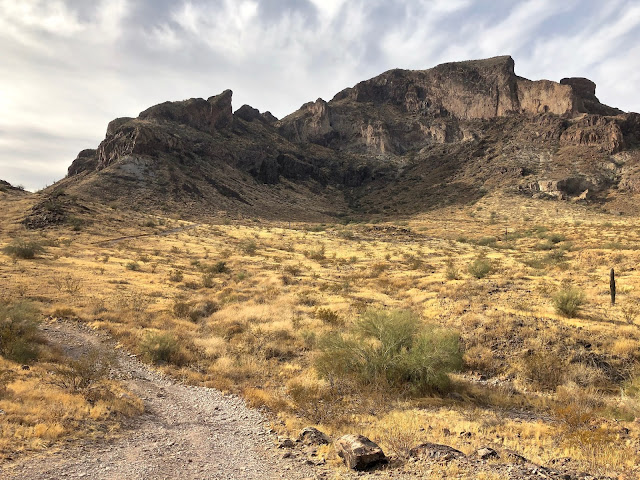 It didn't take long for our "road to Heaven" to go straight to Hell. I've never seen so many loose rocks piled on top of loose rocks. Dear Lord. My birthright for some soil.
To ride was to risk injury. Arizona, of course, had no ICU beds left due to idiotic choices during a pandemic. Yep, the "right" refused to wear masks because it infringed on their "civil rights." Feeling the need to play it safe, our "ride" became more of a hike a bike across miles of loose rocks on top of loose rocks. The hill from Hell would make a good sitcom, something straight out of The 3 Stooges...only there were just 2 stooges.
Finally, having carried our bikes all the way up Hell's hill, the road (an overstatement) petered into a footpath. WTF? Chris and I agreed we had come to far to give up our dream of making a loop around the Saddlebacks. We could see a road miles off in the distance. We decided to hike-a-bike that direction. 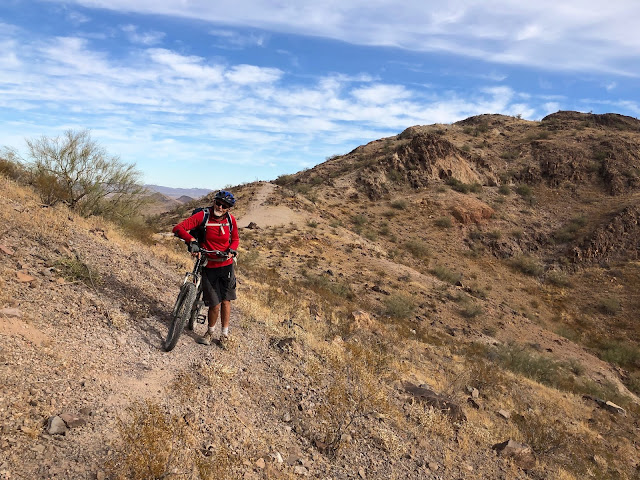 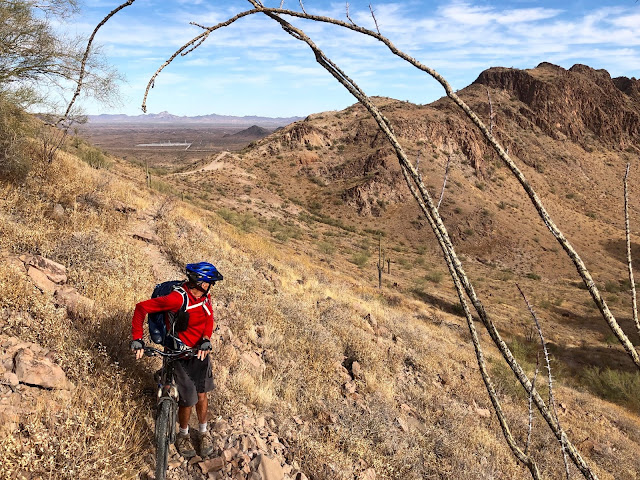 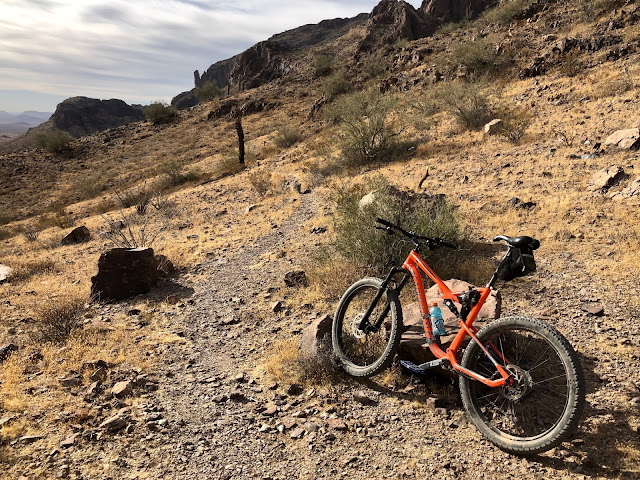 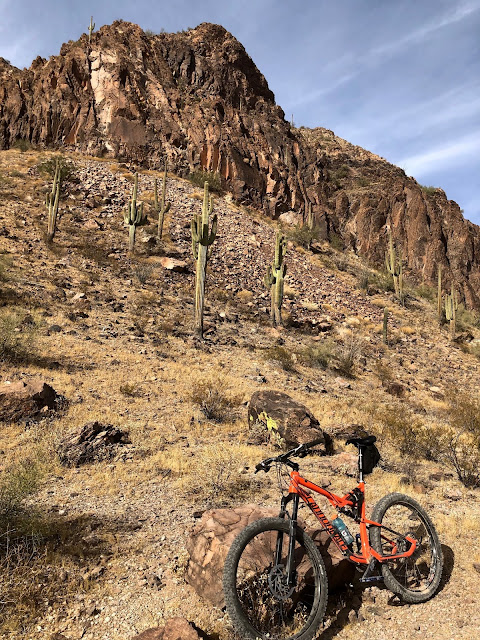 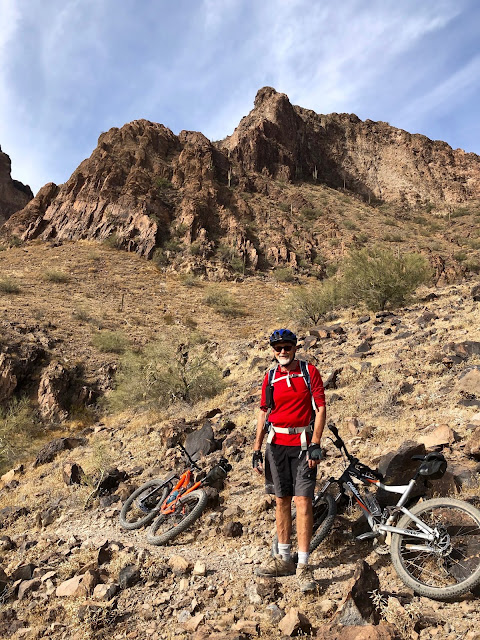 You can see how narrow the trail is in the above and below photos. The bad news was it was rocky, thorny, and off-camber. The good news was that I was too freaked out to worry about snakes. 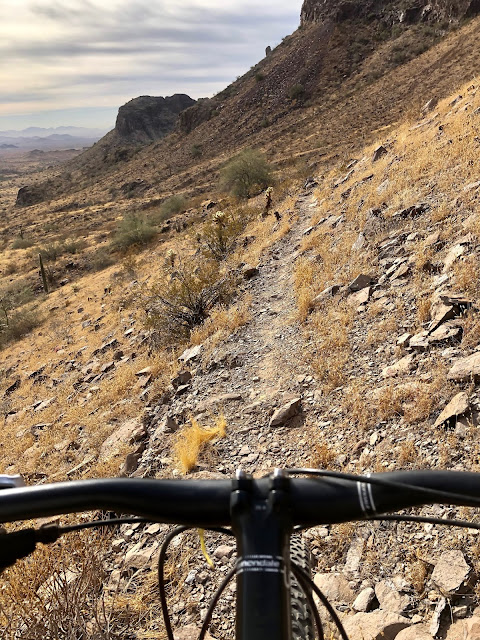 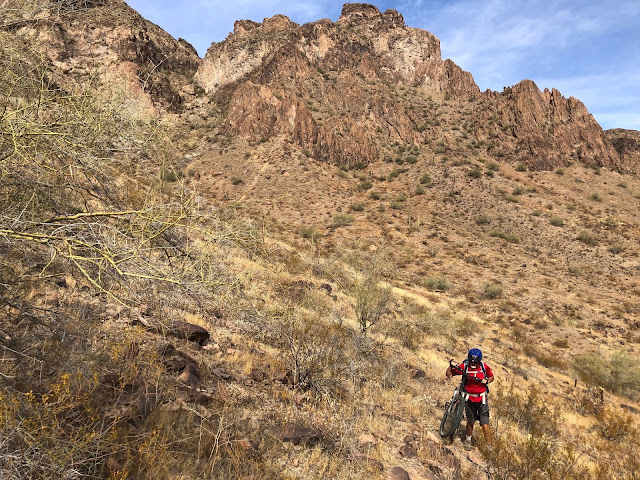 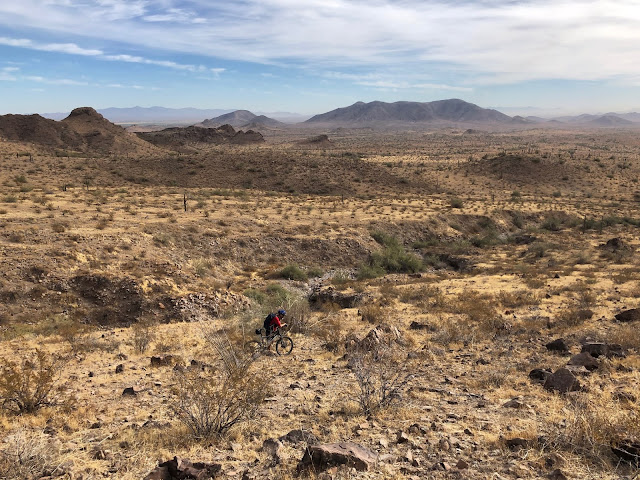 Then the trail petered right out from under us. Oh boy...another cross country bushwhack.
I finally got tired of hike-a-biking through snakeville and got back in the saddle and let'er rip (i.e.: Rest In Peace), dodging cactus, rocks, and weaving through tall grass that hide said rocks, not to mention cactus. Chris played it safer (smarter) and pushed his bike off the mountain. 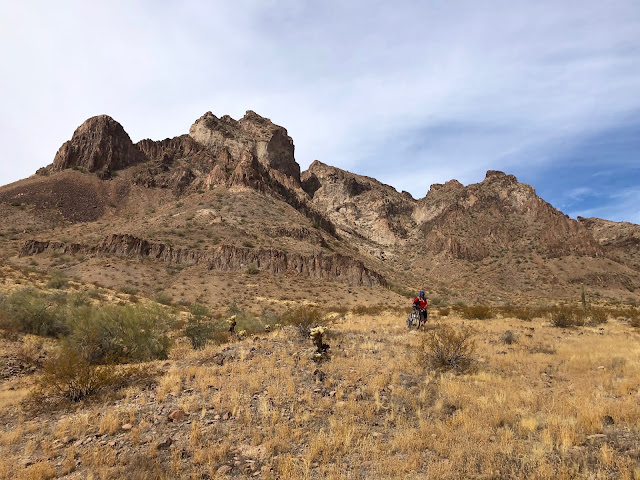 We found the road (say it with disbelief in your voice, it twas a Christmas miracle). Time to eat and rehydrate so we can finish this bitch... because who knows how many miles we have left. Certainly not us.
We compared battle scars and blood over lunch. Men like to do that kind of shit. 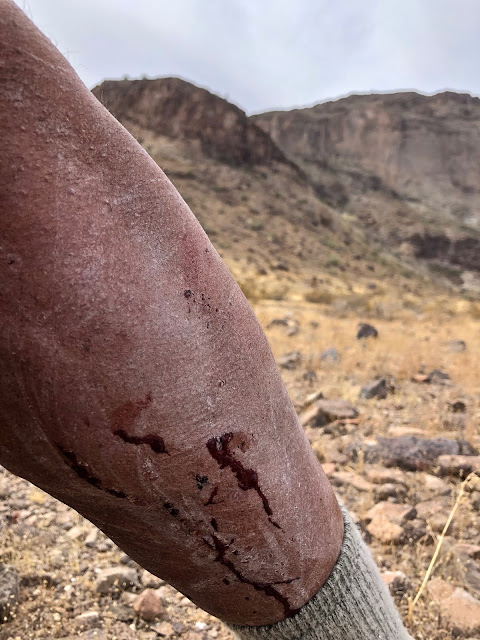 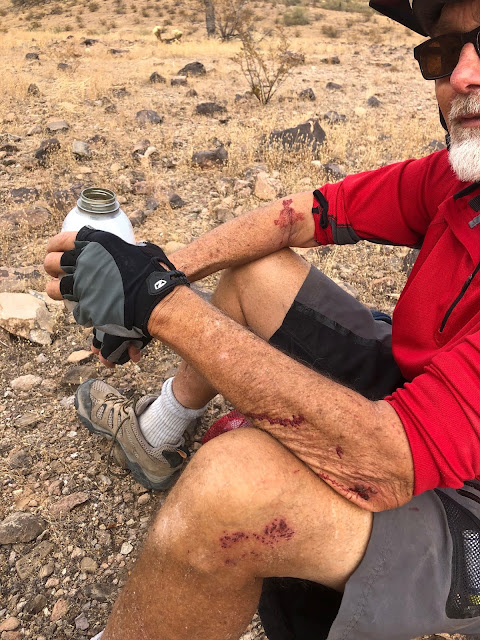 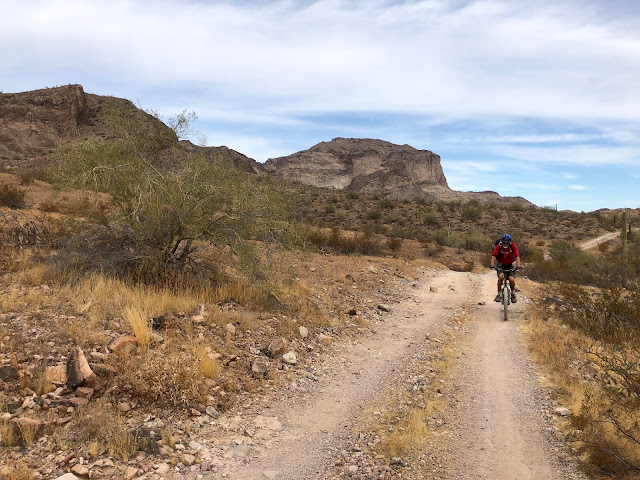 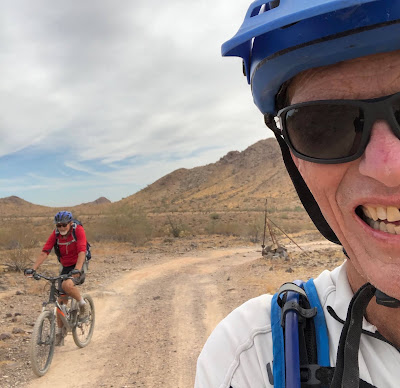 On our last night together, Chris and I took a walk. The clouds. The mountain. The light. That we were in one piece...well, two actually, but you know what I mean. The post adrenalin buzz fading into an Arizona Highways sunset. It doesn't get any better than this.
Our new motto:
Nothing ventured, nothing gained. No harm, no foul. 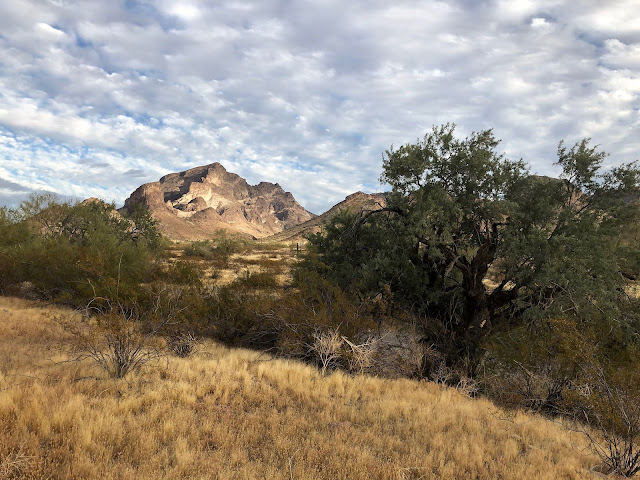 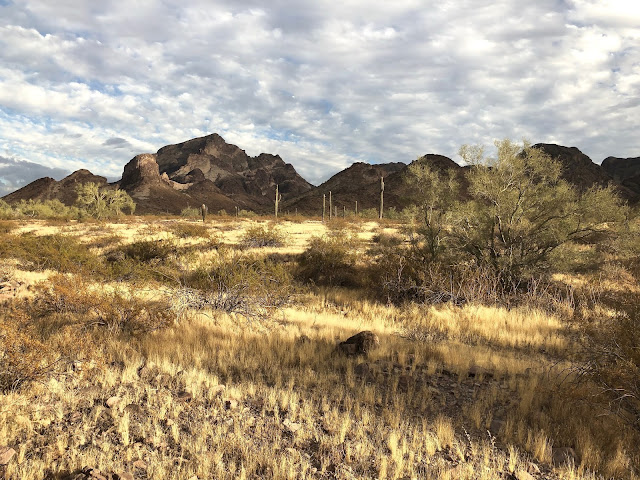 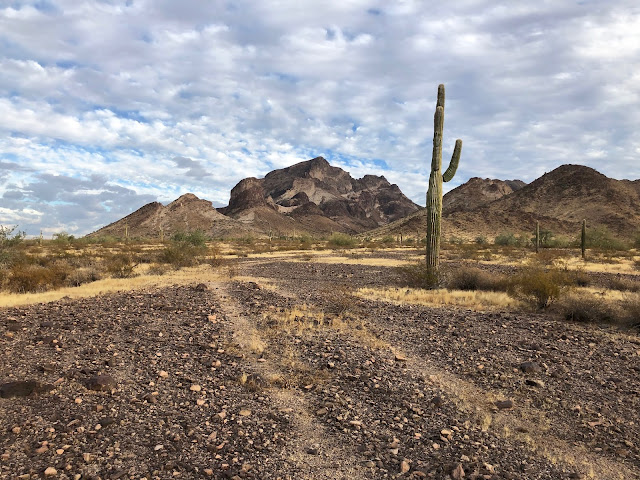 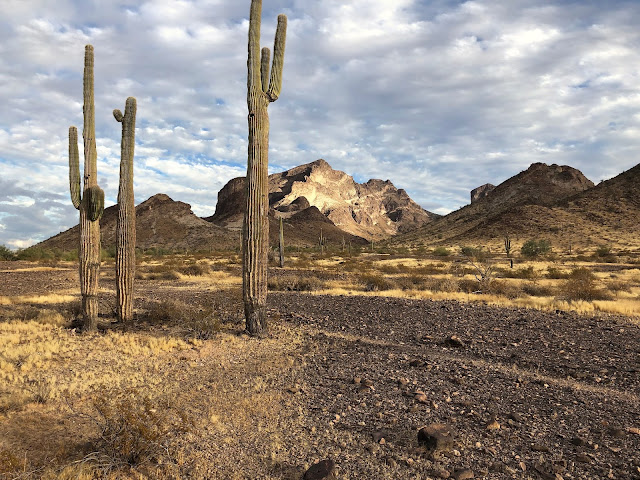 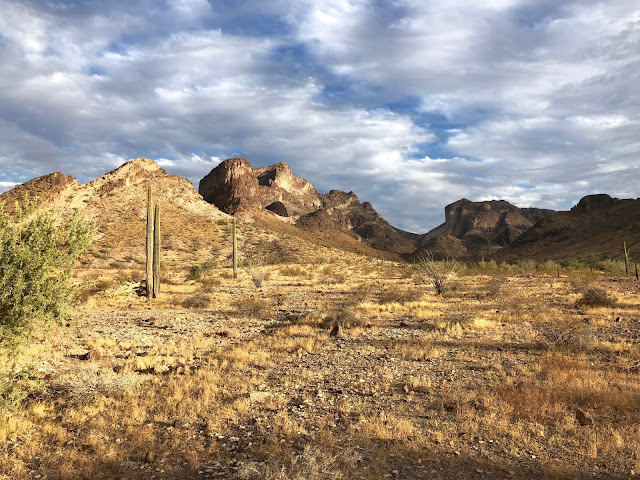