The Land Of Falling Down Rocks 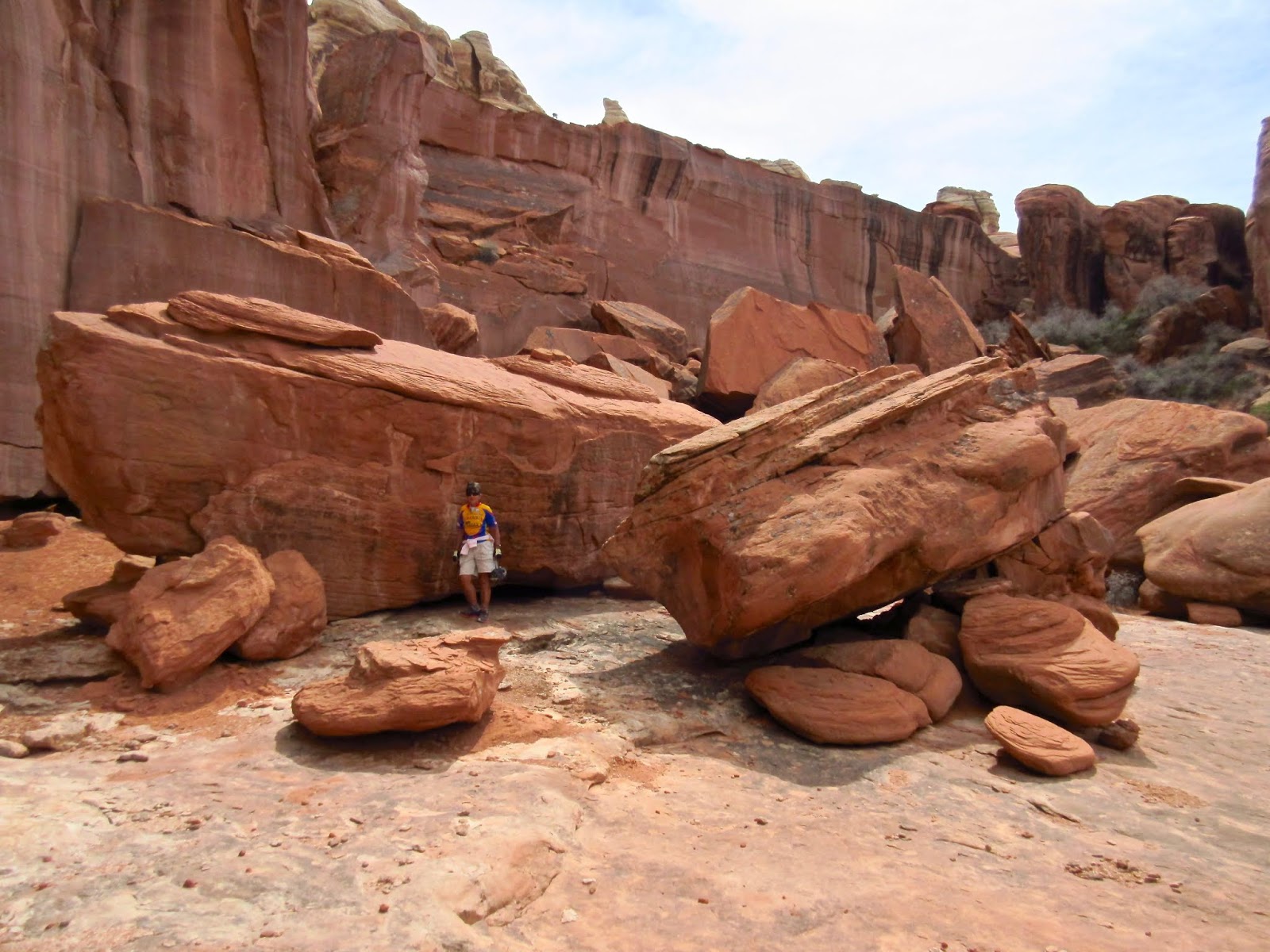 I had hoped to hang around till sometime in early May. But with temperatures occasionally nudging into the mid 80's, I could feel the "noose" tightening around my time in Camp Klondike. Due to work and volunteer commitments, this would be Bobbie's last chance to join me, there, in my ramshackle Rv home-away-from-home.

It was "now or never" for the ongoing Tower Arch saga. Well, that's not quite true...there's always next year, right? Then again, the gods love to throw "wrenches" in the plans of humans. Thus, Carpe Diem! Seize the day before it's taken from you!


We had done this once before in Capitol Reef some years ago, when a 10 mile, top-to-bottom sand and boulder slog through Lower Spring Canyon proved too unwieldy for a day-hike, especially without a "shuttle" vehicle. So we ended up breaking Spring Canyon into two day-hikes—one from top to about halfway down-canyon, and the other a hike from bottom up to overlap our previous turnaround point. Voila!


With time running low and temperatures climbing higher, and having twice spied possibilities from atop The Whitecaps, Bobbie and I decided to finally attempt a reverse engineered route through Little Ass Valley that, hopefully, might land us at our previous turnaround point from the Beyond Tower Arch hike.

Breaking what would amount to a nice day hike in two is a little like "kissing your sister." It's just not the same. But, with so many unknowns beyond Tower Arch, it's better to be safe than sorry and live to hike/bike/play another day. Besides, last time I checked, two halves still make a whole...

Success in finding a reverse way in would validate my theory of a possible loop-hike. God willing (knock on wood/sign of the cross) we'll put the two halves together as one dayhike next spring...or maybe even this fall with Juliet and Chris, if she can make it to Utah this time around (bring your stickiest rubber soled shoes, Juliet!). 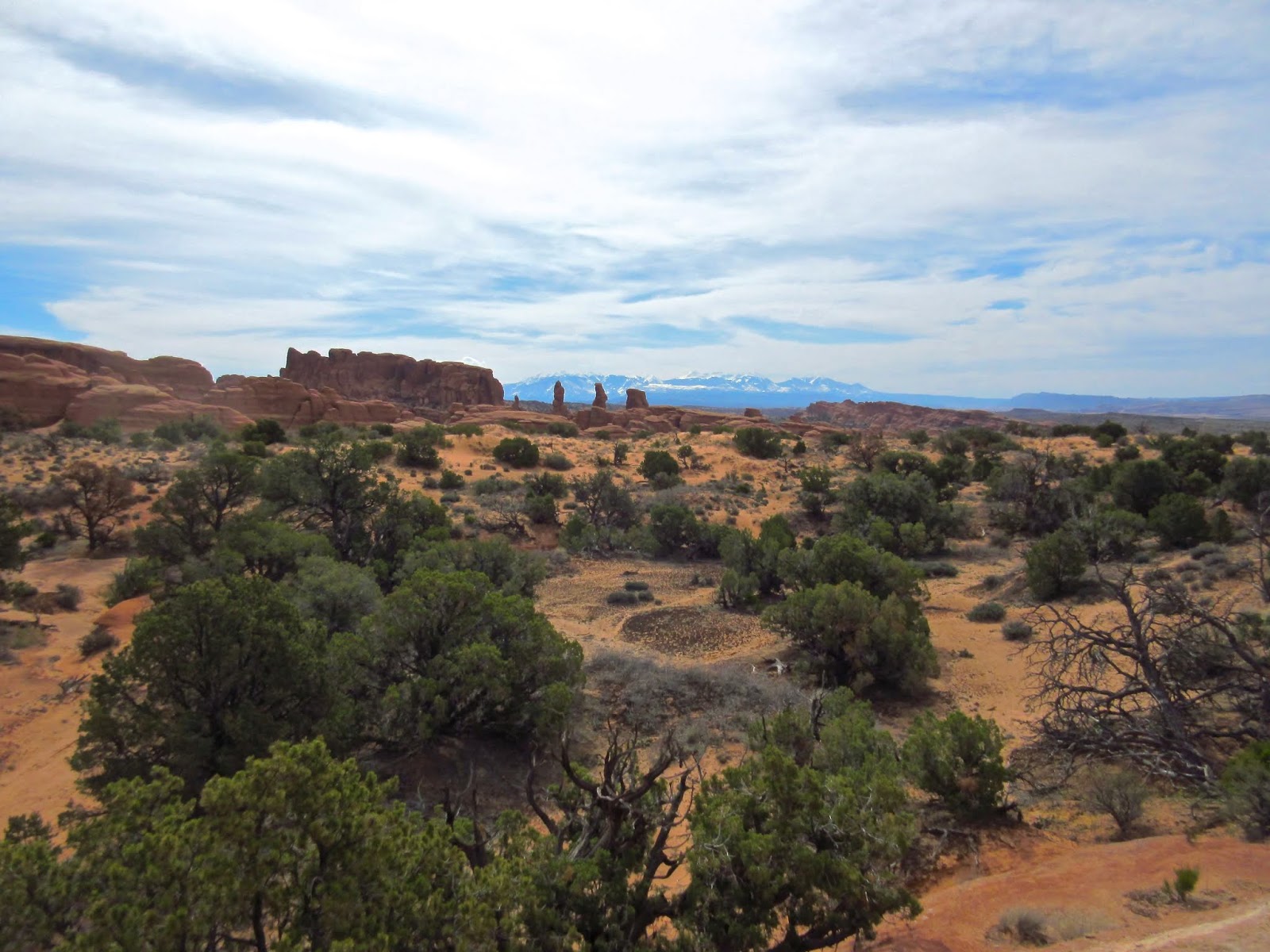 From our collective "Whitecap" memory, along with the use of an overpriced-yet-still-useless recreational topo map, Bobbie and I had a rough idea in mind for a reverse route. It would involve a bike ride to the Klondike "slabs" and the low gear grind up to a point where the tippy-tops of several familiar Bobble-heads peek above the rising sandstone horizon. From there, we should be able to bike cross country using the loaves of sandstone as a sidewalk of sorts, while aiming for the Bobble-heads. What could possibly go wrong?

“It does not do to leave a live dragon out of your calculations, if you live near him.” J.R.R. Tolkien, The Hobbit

As I've mentioned before, the sandstone around Klondike tends to lay in alignments of closely spaced "loaves," or long "baguettes," if you will, sliced deep with ravines on either side. Problem is, those ravines require portages, i.e., carrying our bikes. So, after about the third portage you can understand that it ceases to be "fun."

"You know, It would help if these fucking seams ran the same direction we're going."  Bobbie Johnson

After a long struggle that proved short on progress, it occurred to us to ditch our bike-anchors. I found a large cedar tree with hope that it was something we could easily spot on our way back. Off we go, overheated and unaware that we were still wearing our bike helmets.

The bike-stash turned out to be a timely move when, while wading a wash not 20 yards distant, we stumbled across an Arches National Park Boundary marker post. They don't take kindly to cross country bike riding, sandstone or not.

Somehow, in the zigzag confusion of climbing cross-sliced "loaves," we lost sight of our Bobble-head landmarks. Making our best guess, we headed for the sandstone horizon, hoping for a better view of where in the Hell we were. 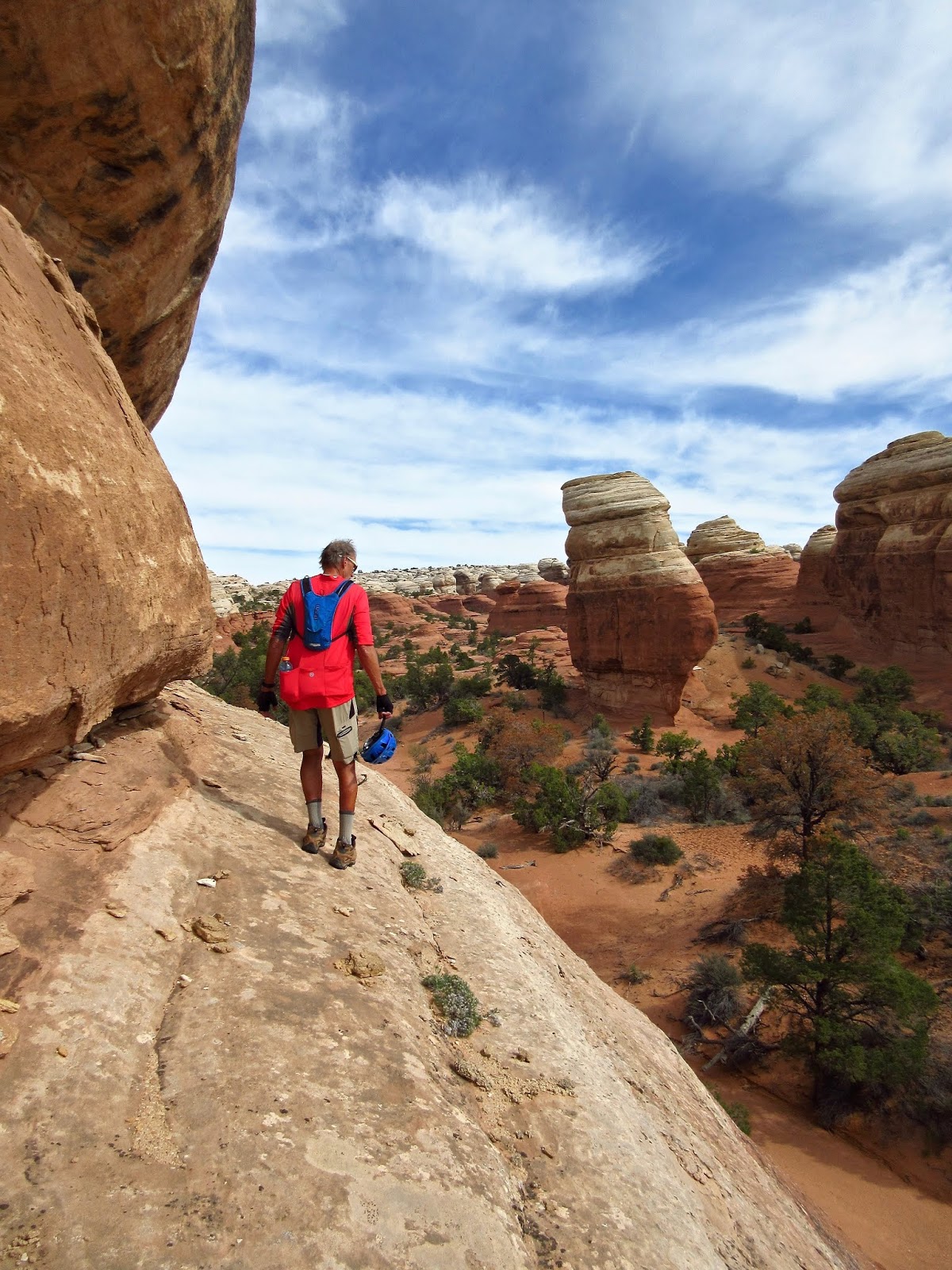 Hey Bobbie, the "Sub" has a catwalk we can take... 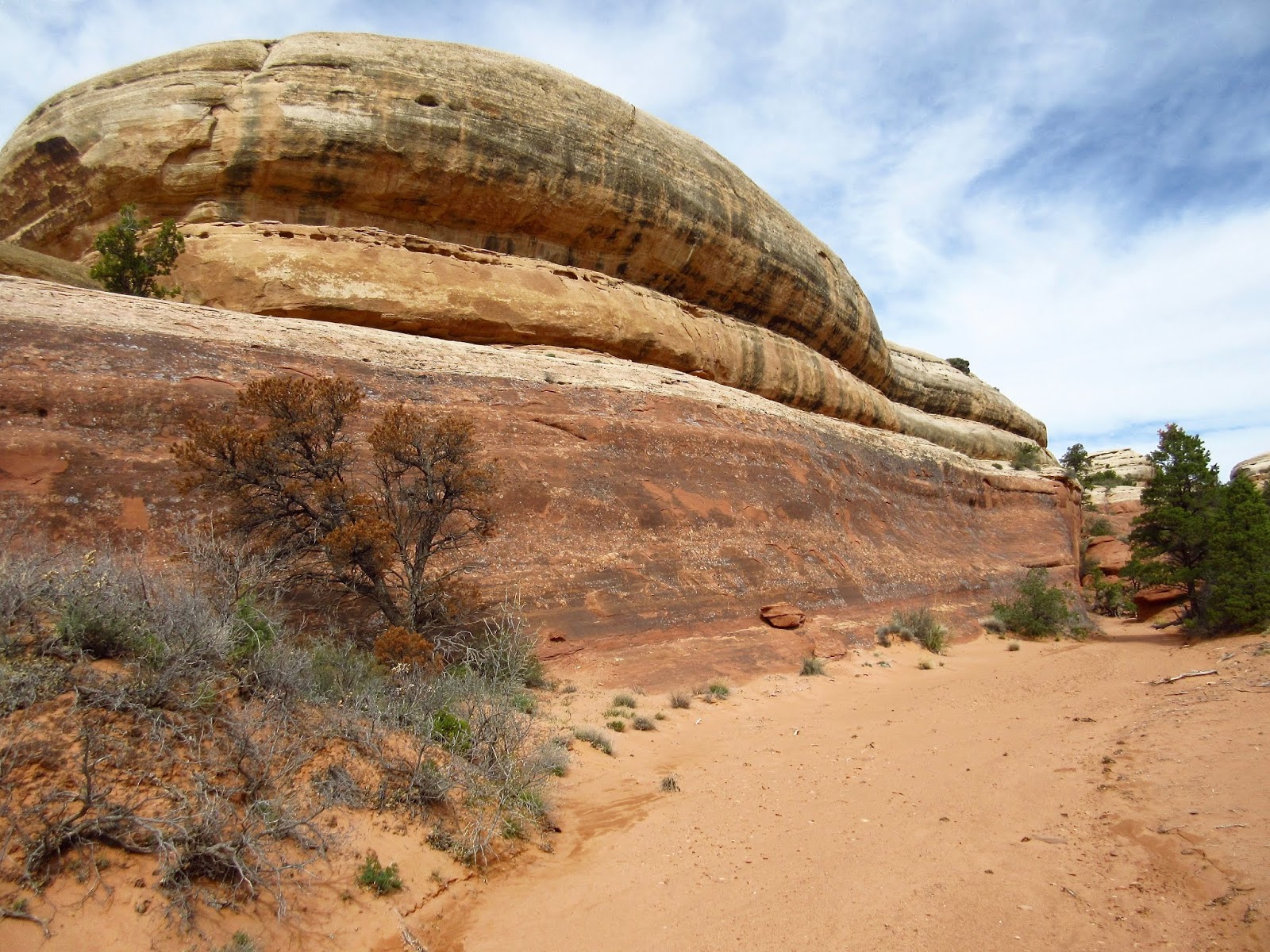 Till it doesn't. As you can see, it petered into a cliff below the subs "bridge." By this time we are used to turning around. Time to slog up-wash instead, with pauses to inspect top-heavy formations balanced on wafer thin foundations... 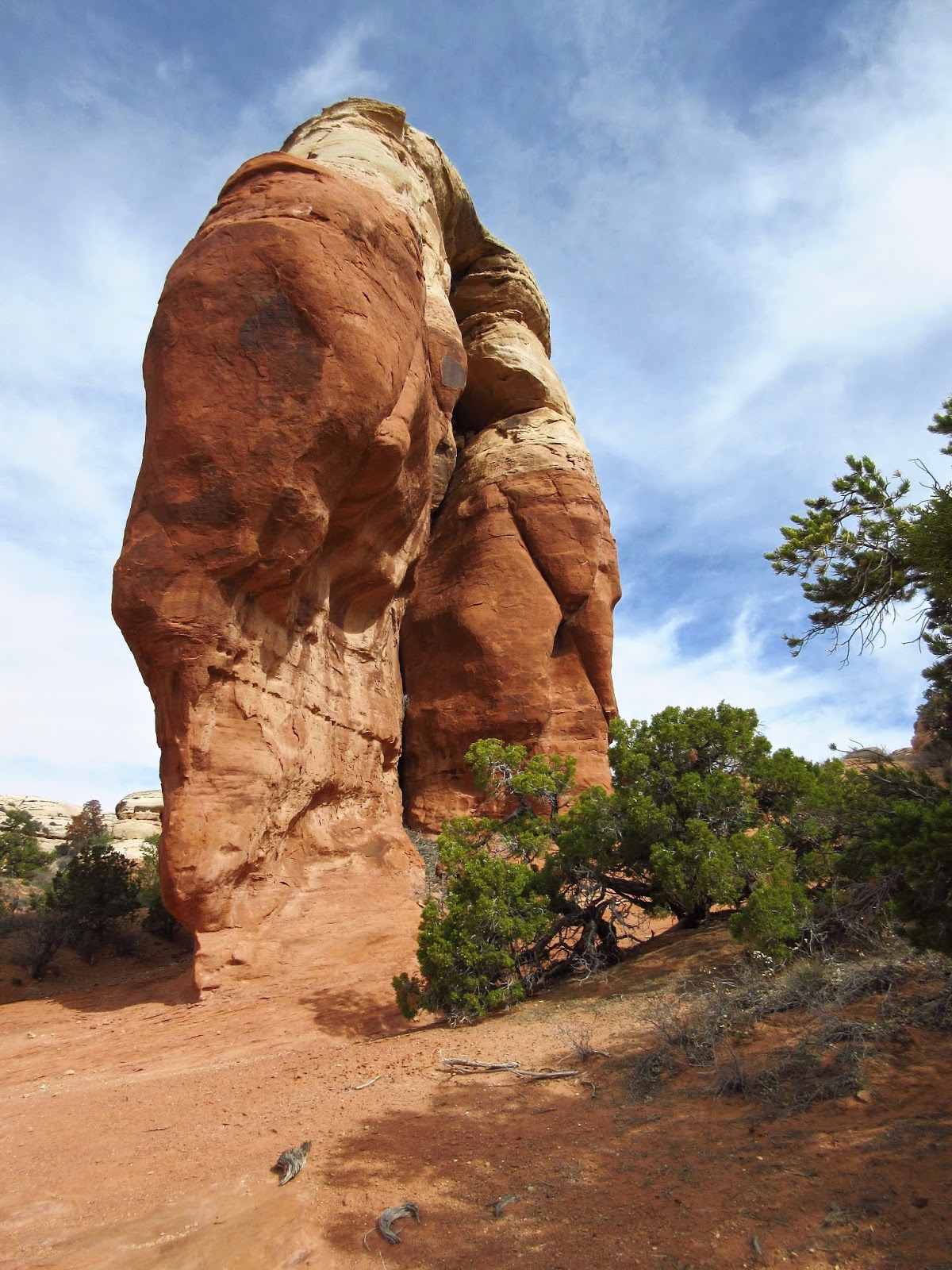 After our long hike-a-bike, the sandy wash was also becoming less fun. So we popped up onto a sandstone bench that followed the wash. Easy walking... 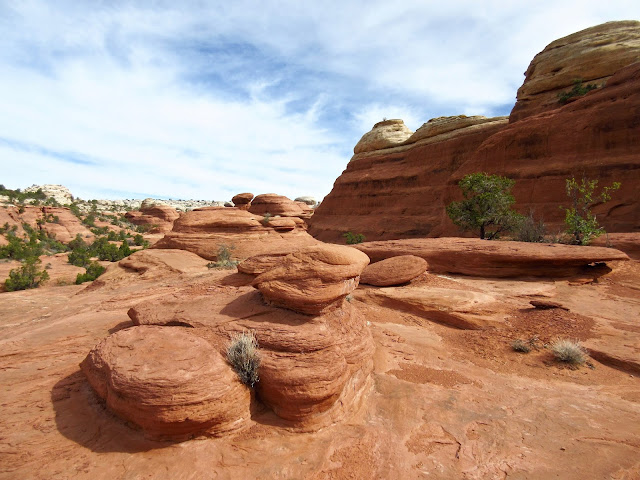 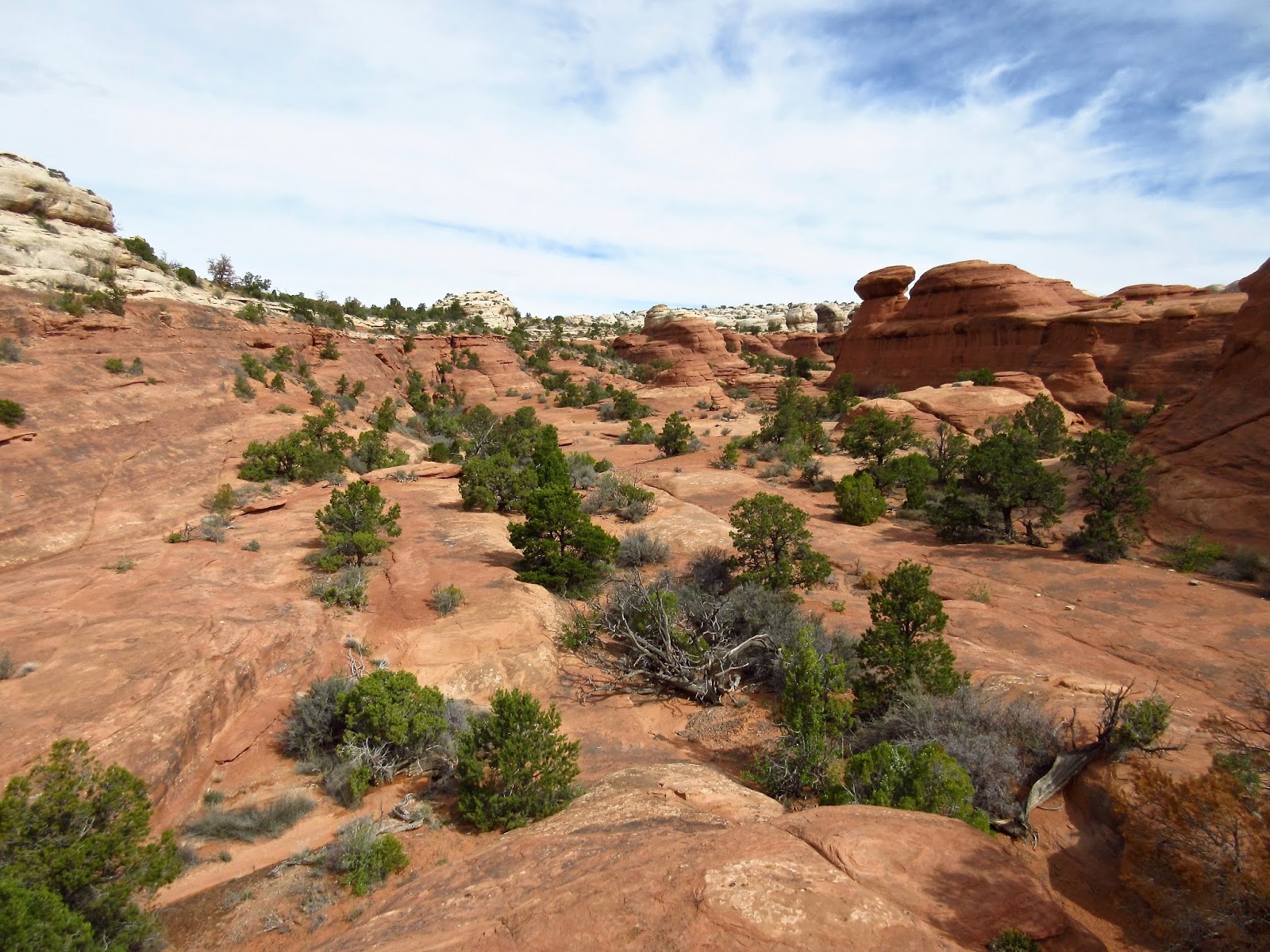 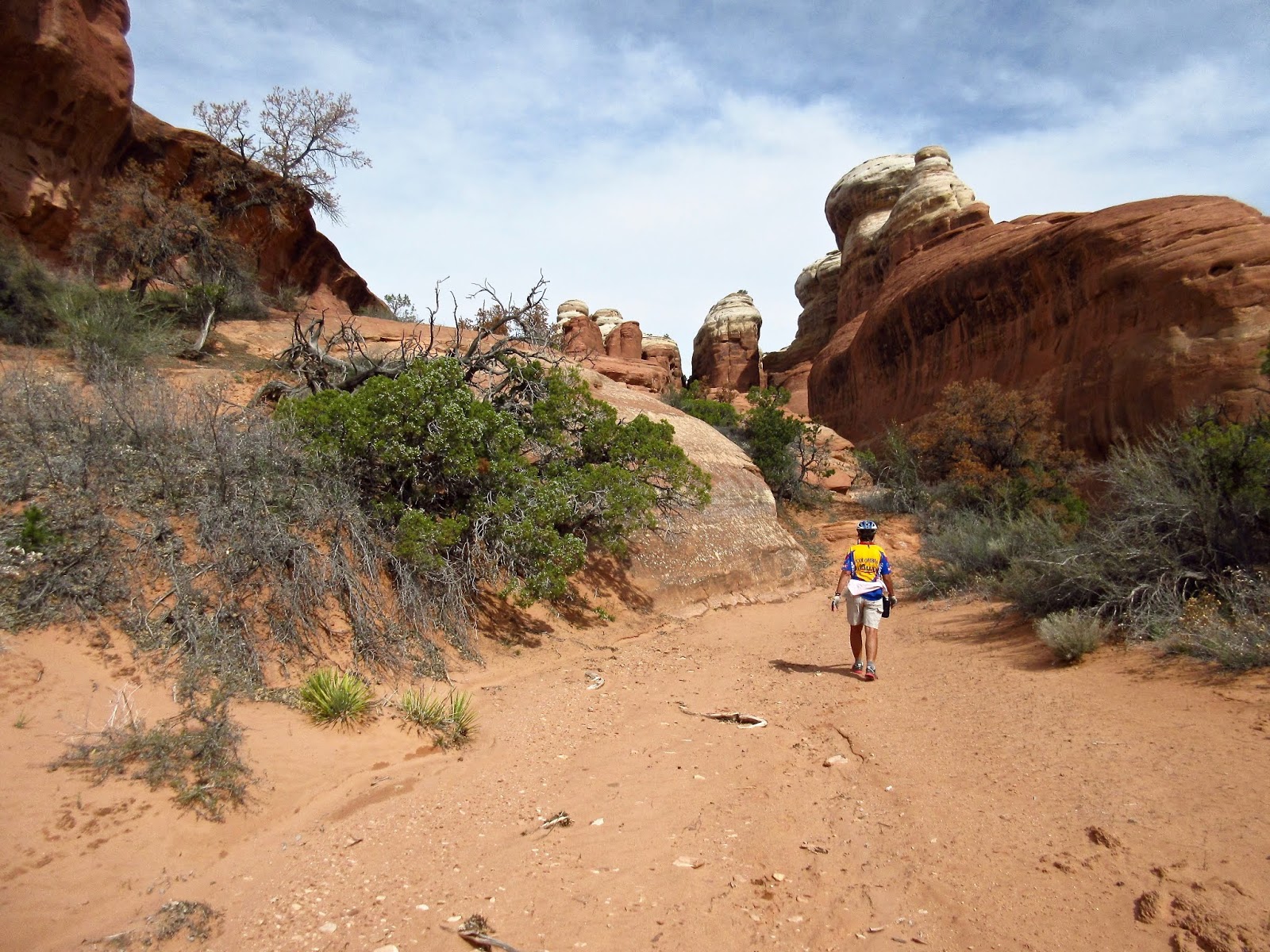 Eventually, we are force back into the wash to avoid delicate cryptobiotic soils (yet there are cow tracks!) We regain some optimism as it "seems" as if we are headed in the right direction. But, it's a bizarro world in the Land Of Falling Down Rocks...nothing is as it seems. 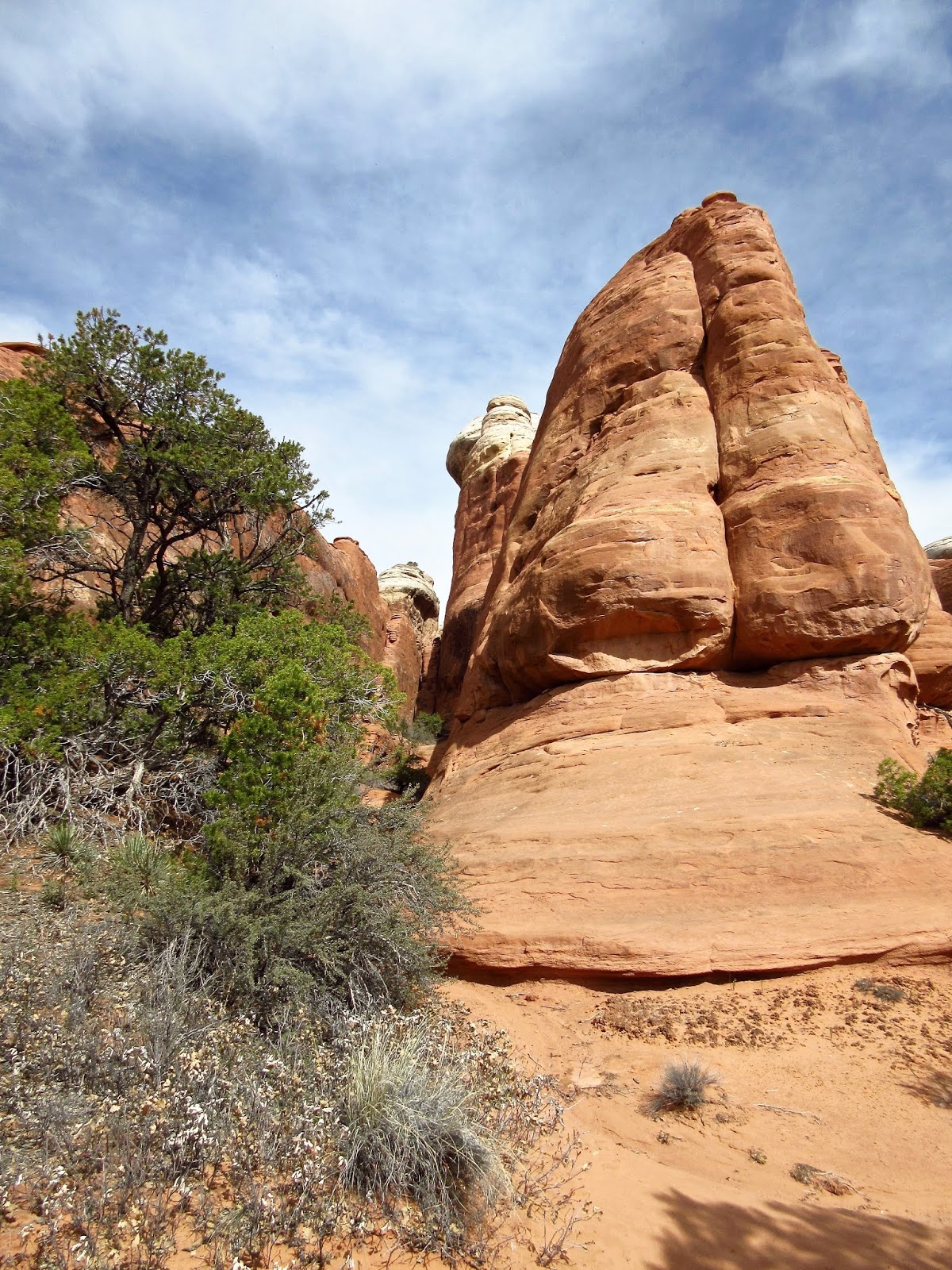 Loaves of red rock soon morphed upward into more giant submarines, each separated by slender slots too narrow and crumbled to navigate. Over "there," beyond those Whitecaps, is Big Ass Valley. 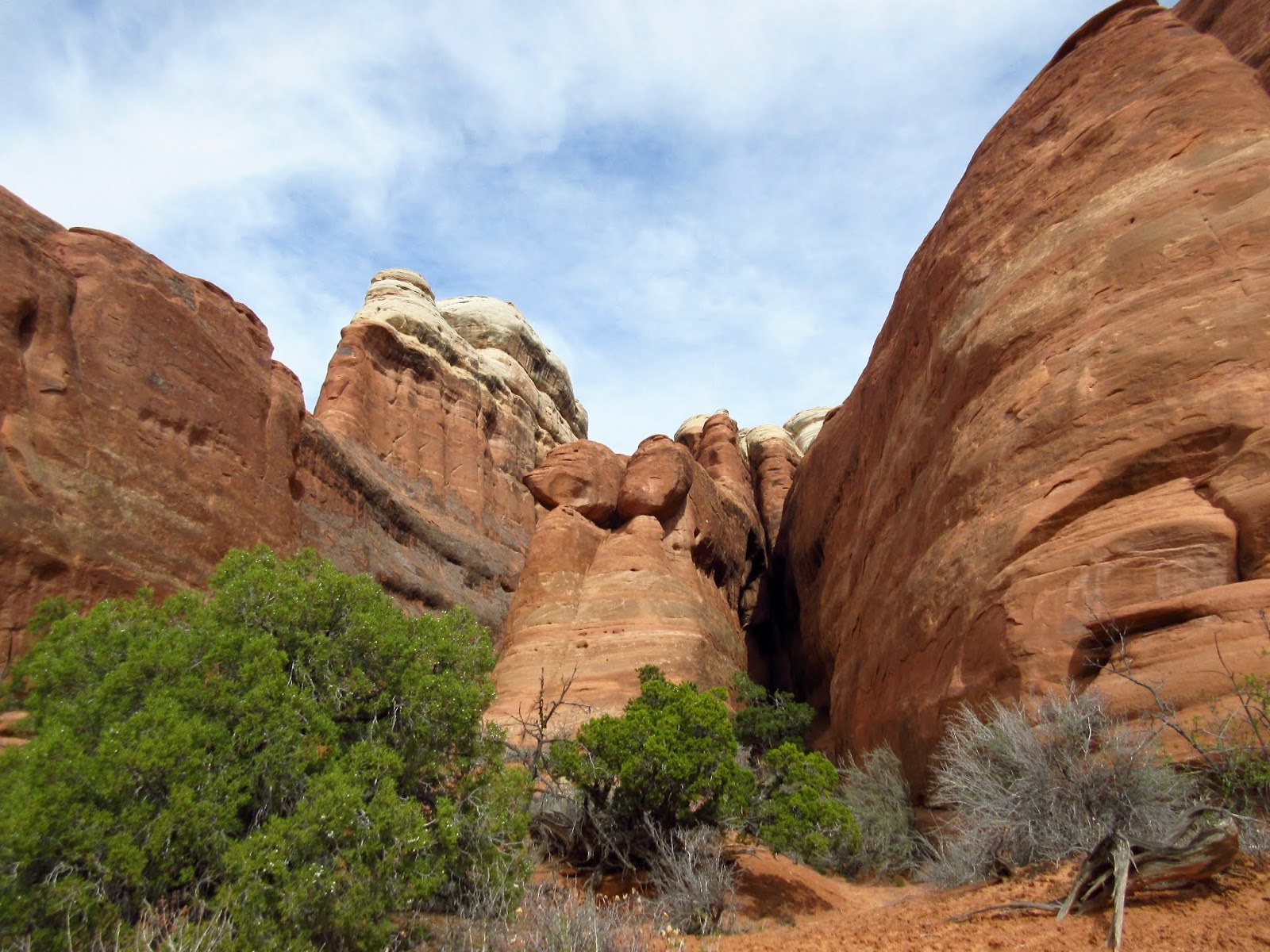 Cut after cut...slot after slot. So many cracks to explore, so little time. It's Sedona to the 10th power...before all the tourists and before the upper-income bracketed people bought up the beauty to build their use-once-or-twice-a-year Mc Mansions on.

Soon, our "Little Ass Canyon" wasn't so little anymore. Are we in "Little?" Did we miss a turn and wind up in "Big?"
It's hard to tell, way down in a wash-bottom. 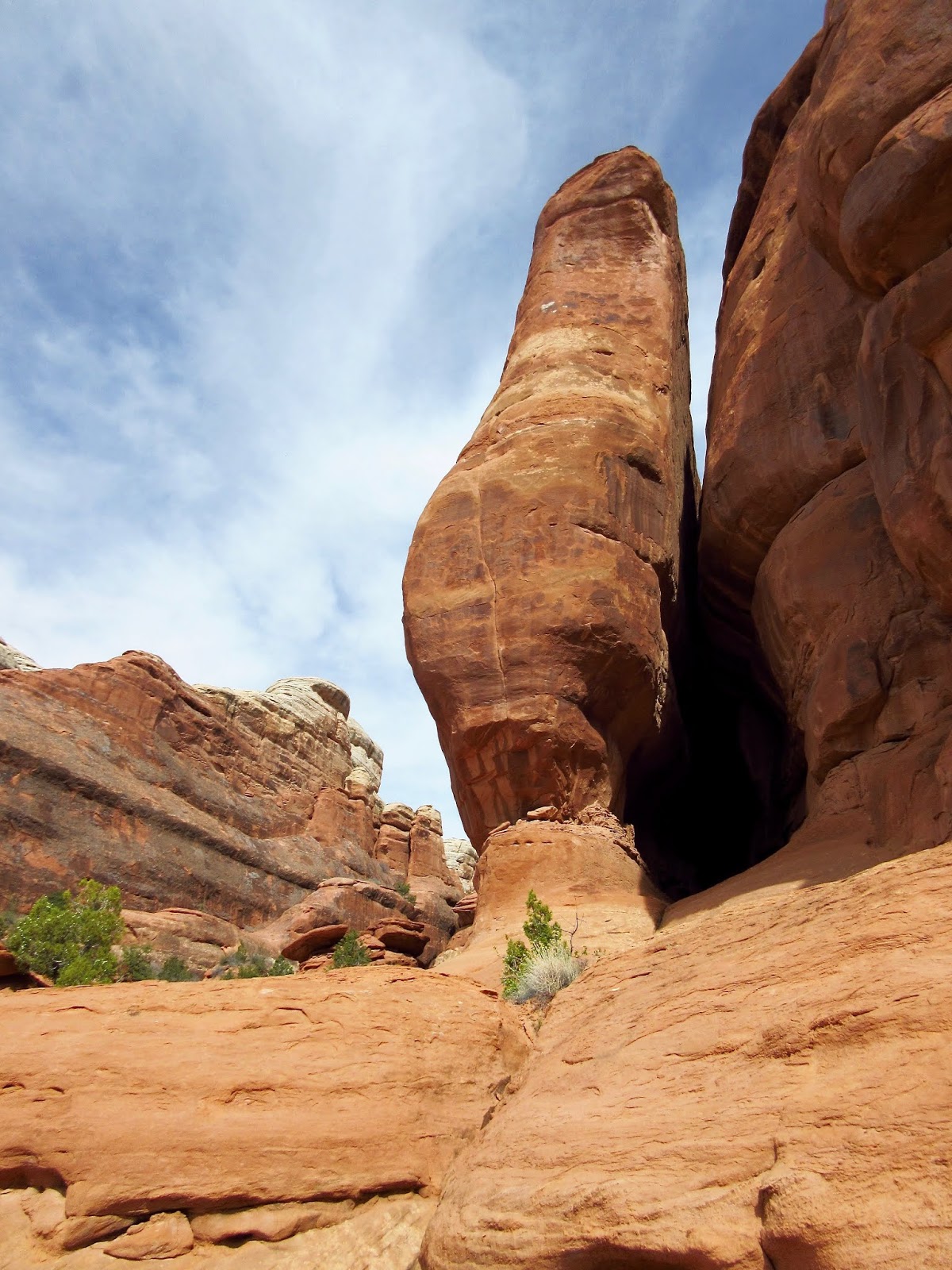 By then we'd been biking/walking a long time. There's no breeze down in the wash. We are hot and we are tired and we have no clue as to where we are and how to find the nondescript, random corridor to Tower Arch, let alone refind our stashed bikes.

It was time to leave the wash for some high ground, have a look around. OMG! Our wash overshot the destination. Using game trails and small washes, we worked (and I mean worked) our way back toward the familiar Bobble-heads.


I keep turning around, looking back for something familiar. Off in the distance I see Whitecaps. Were those the ones we were on? Is Big Ass Valley over there? If so, I'm glad we aren't navigating that mess.

We enter the "Land Of Falling Down Rocks." Big rocks...really big rocks. It tough going, to say the least. 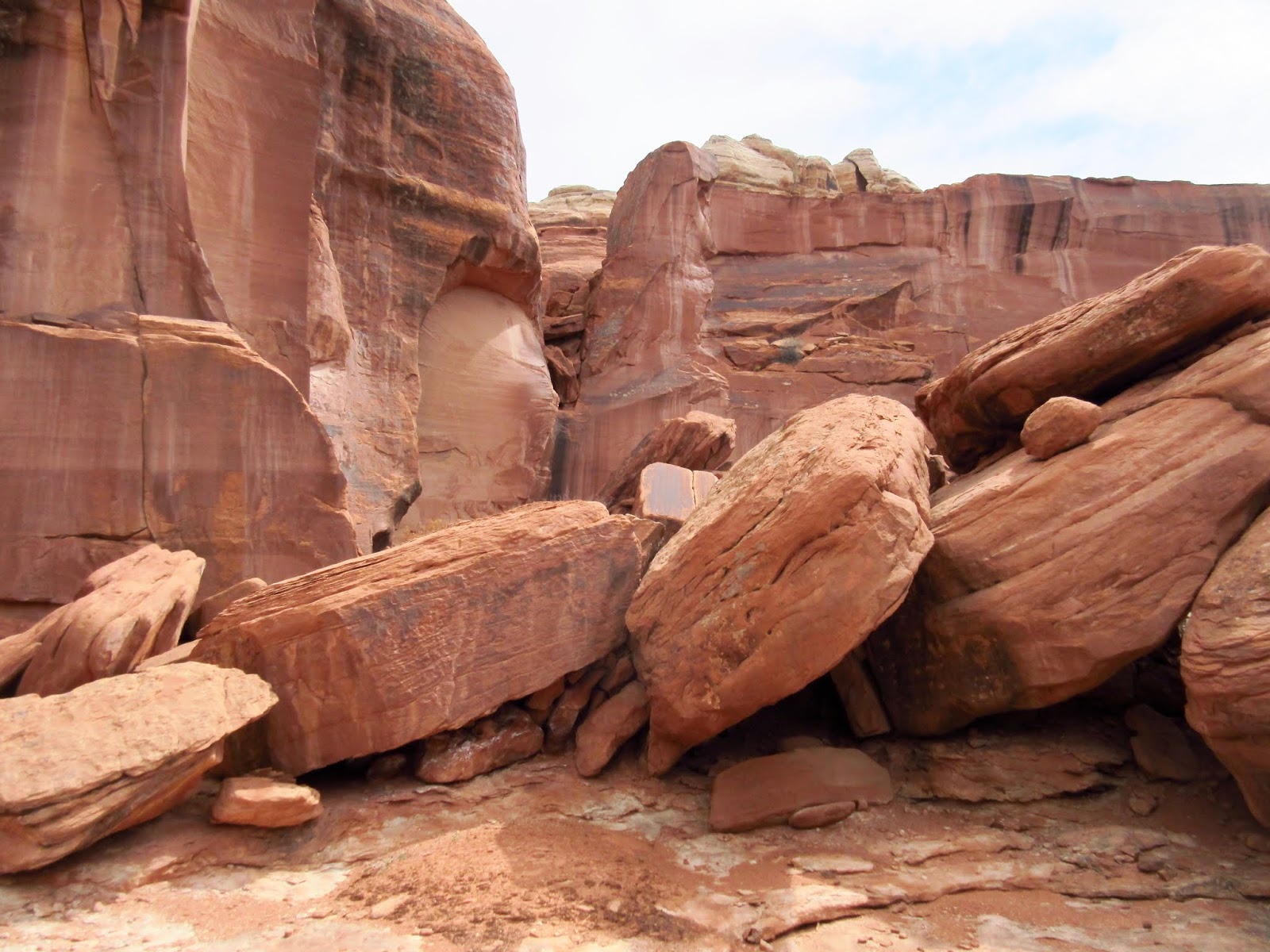 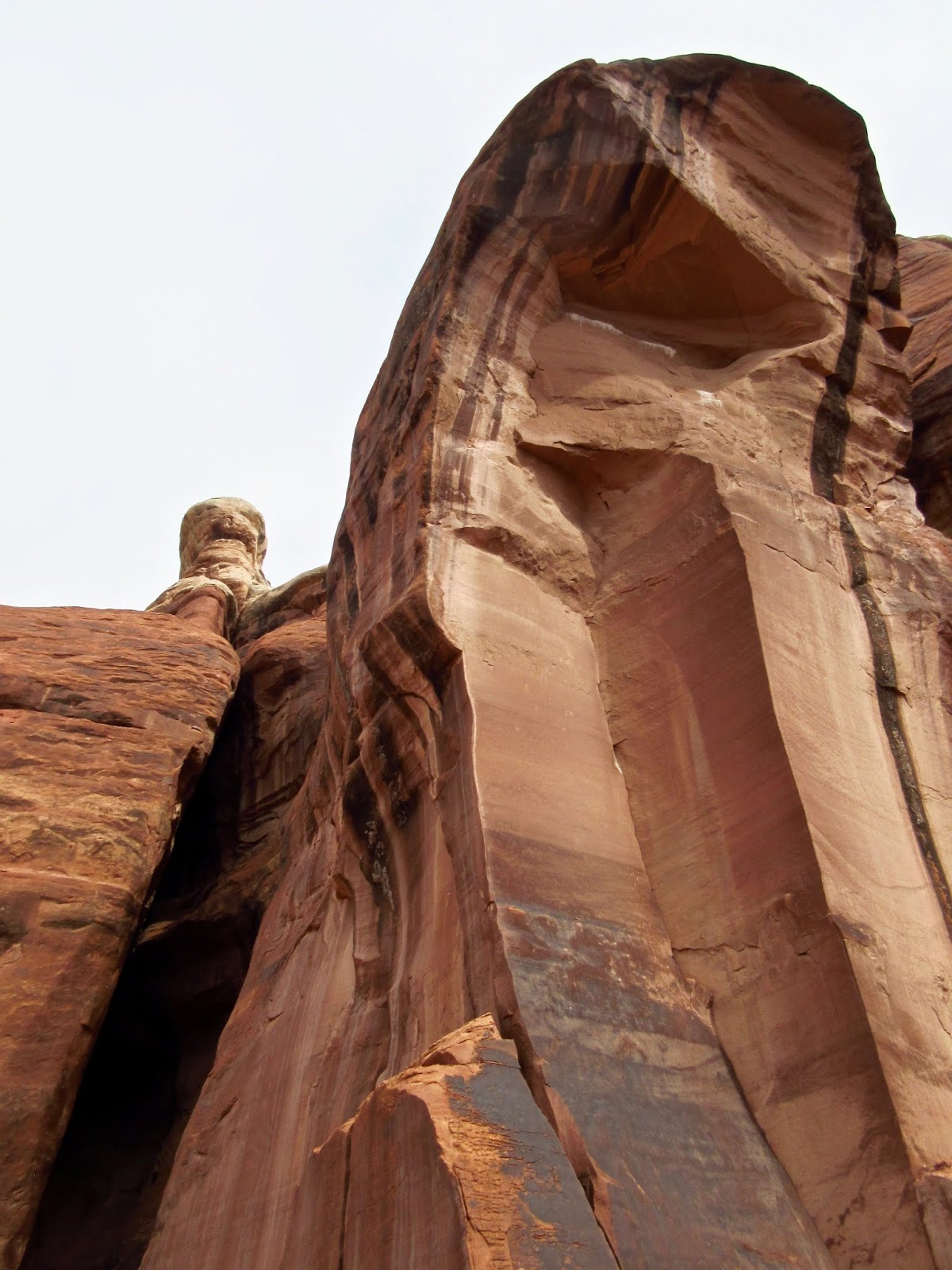 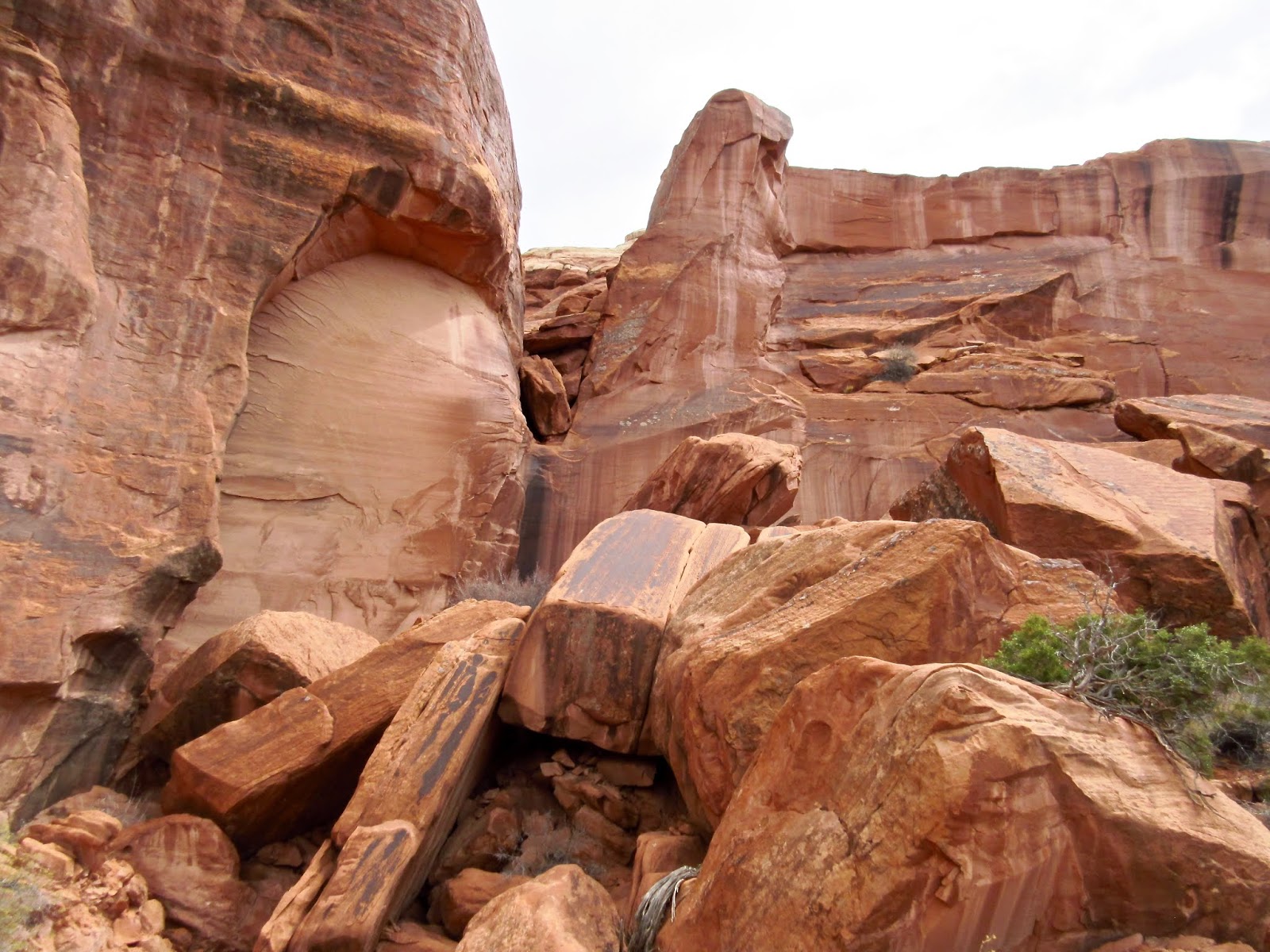 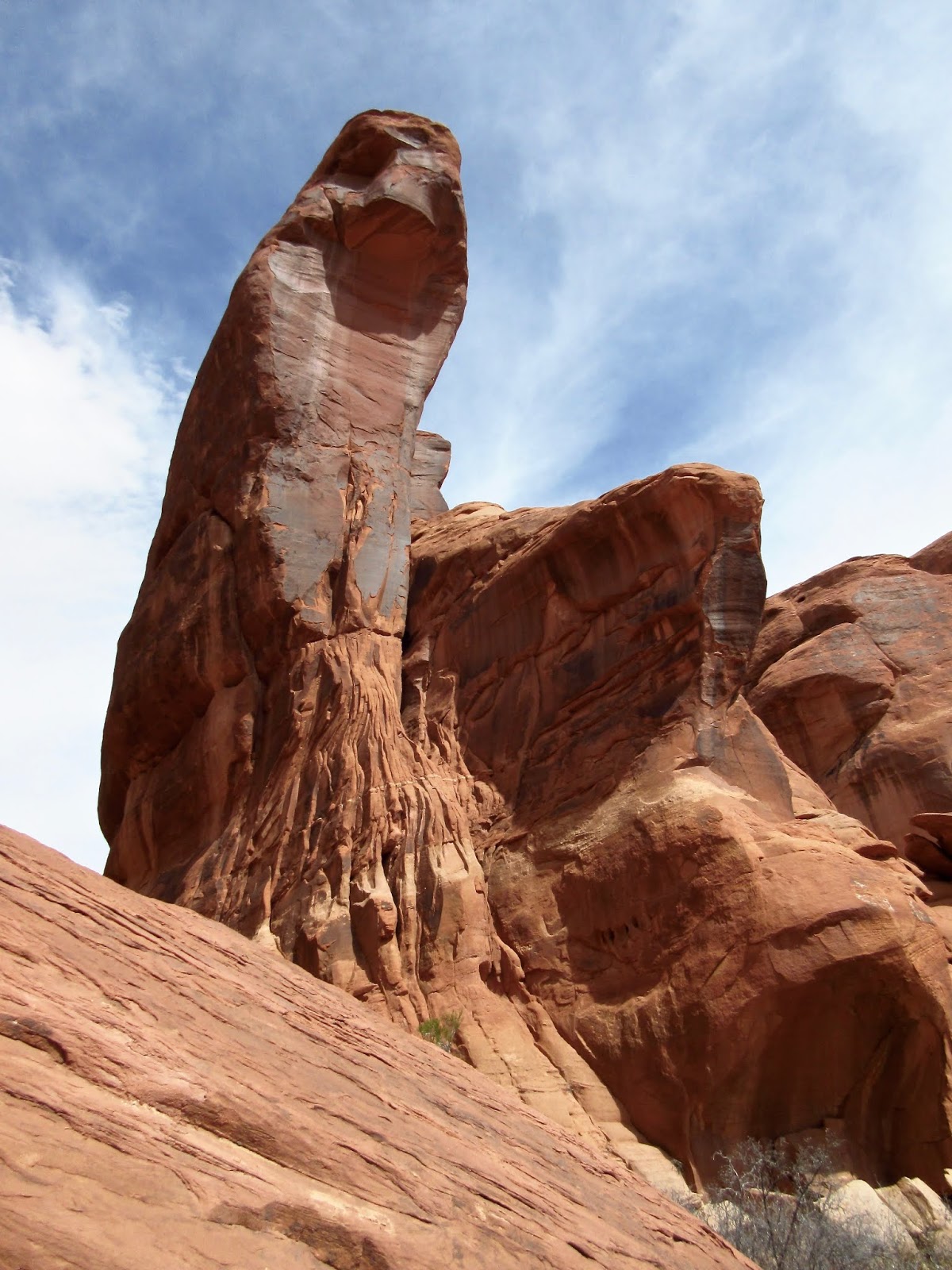 If you want to feel really small—like stripped naked small, so fucking insignificant that your life means absolutely nothing– then go to a place where your reins of "control" are given over something bigger than you...a random place full of random acts by fickle, fickle gods.

Stand amongst monolithic towers that rival Wall Street. Allow your eyes to climb them inch by inch. Allow all senses to engage...sight, hearing, touch, smell, taste. Lay hands on house-size boulders and feel the latent energy...wonder when they fell and if they made a sound. Feel the tingle when you realize that every last one of them were shed from above...way up there, over your head.
Good thing we brought our helmets.
Trust me. It does one good to get small. 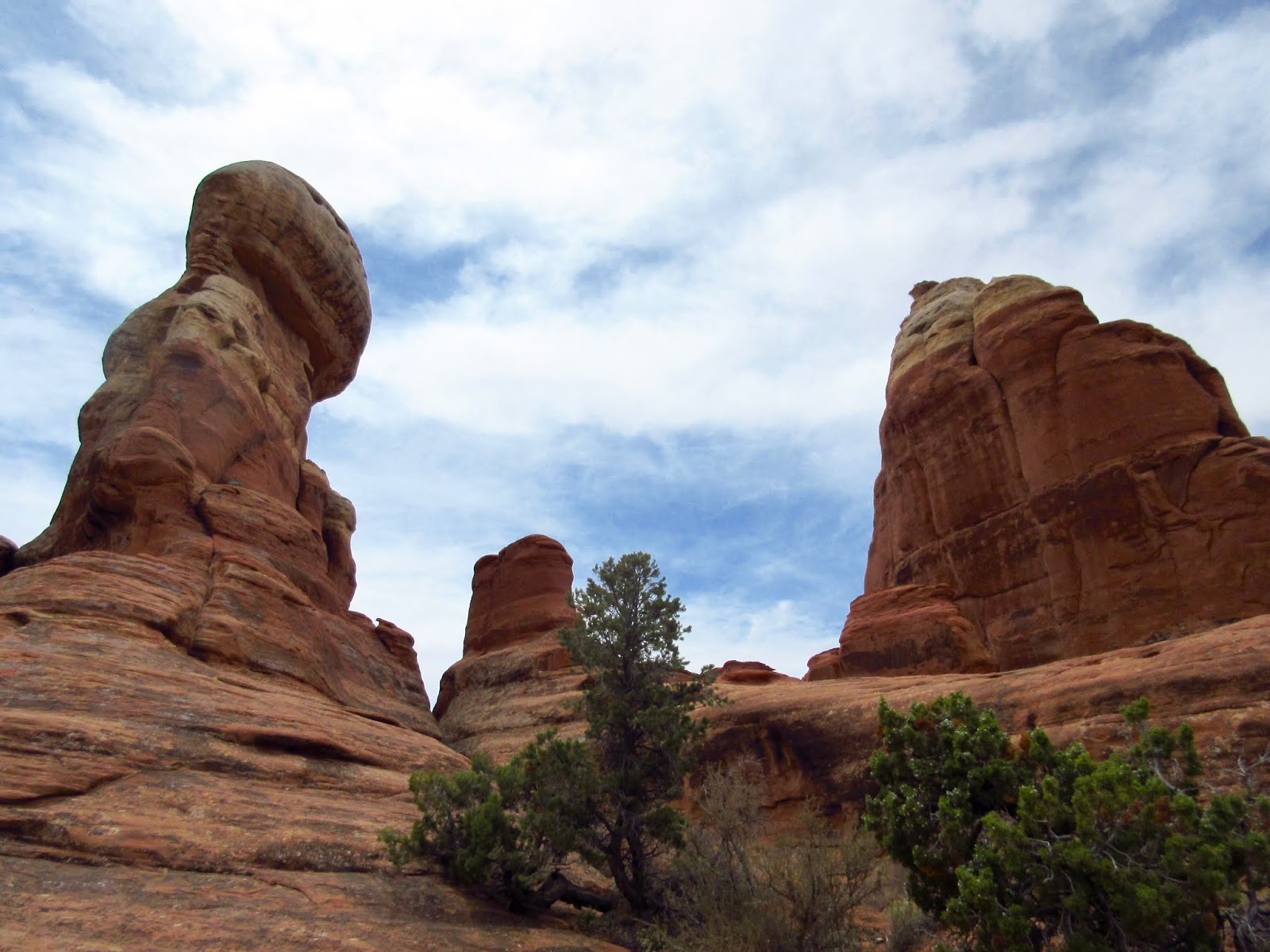 We make for a Bobble-head that resembles ET...but it's not ET, it's a look-alike. Wrong canyon. We keep working our way west, slot by slot, dead end after dead end.
Until... She goes into her Doubting Thomas role, because...well,  she's heard this three times in the last hour.

No! This time I'm sure!  Look, there's the back of ET's head, and "Aunt Jemima," and, and, what'd I call it, the Baby nursing Mama formation.

I've learned over the decades that if you say something enough times, people will begin to believe it...even when they know it's not true (I give you POTUS, as an example). Anyway, Bobbie began to believe. It was a slow "truth;" poor gal, she'd been traumatized by a too many "false summits."

I walked down a long familiar catwalk...over to the half-dead tree I used to climb down a 15 foot drop off. Bobbie's looking for footprints...something in a size 14, please. Nothing. They had long since been weathered away by wind and, well, wind.

But there was no denying Aunt Jemima. She's one-of-a-kind recognizable. She hid from our view behind ET, such that, when we got past ET far enough to see her I pronounced her "Aunt Jemima." I later realized that the formation's resemblance was to Mrs Butterworth, not Aunty J..
So sue me.
My point is, Name Things when you are wandering out in the middle of nowhere wilderness. It might help you remember seeing it before, and help you find your way back to camp.

I couldn't believe it. We had made it. We had found our turnaround point. The Loop is Alive, it's Alive.

Fortunately for our tired bodies, we found a shortcut back to the wash and to the first submarine. Now if we could just find where we left our bikes.

Believe it or not, we did find them. And it only took 45 minutes to an hour from our turnaround point. That's makes the Tower Arch Loop a doable day hike.

But it will not happen till next time. It was hot...and the forecast was not favorable, at least in the near future. If it's 85 outside, it's 95 in Goldie.

So Bobbie went home a "believer." Chris stuck around. He and I biked and explored a few more days...right up till the day it was supposed to reach 85 degrees. Yeah, we both left that morning, headed our separate ways...me to Lovely Ouray, Chris off to work this summer near Portland, Oregon.
And that's that as far as our "Old and Restless" Saga goes.

This post comes to you from my easy chair next to the hearth in Lovely Ouray, where Spring battles for control over Old Man Winter... 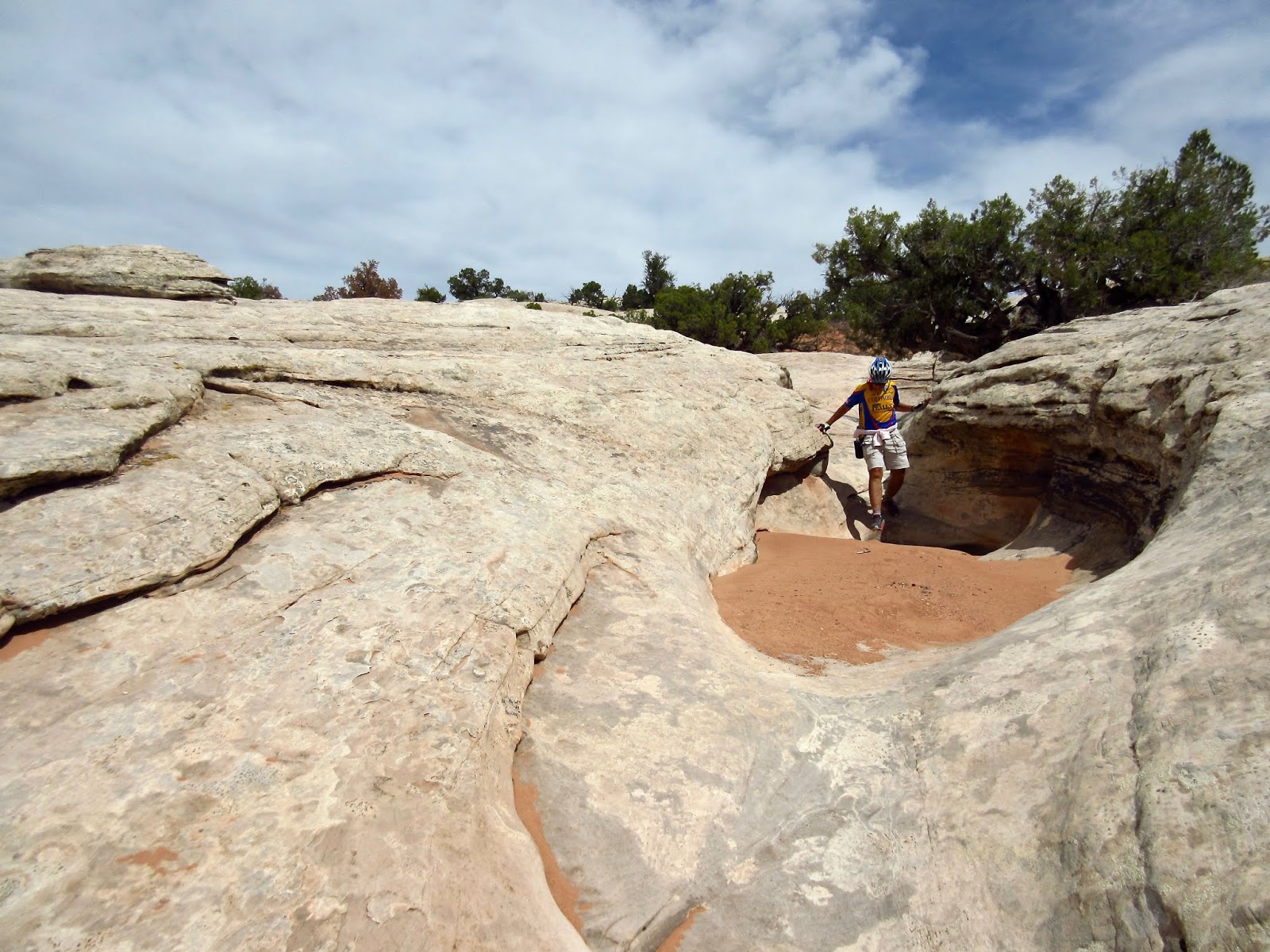 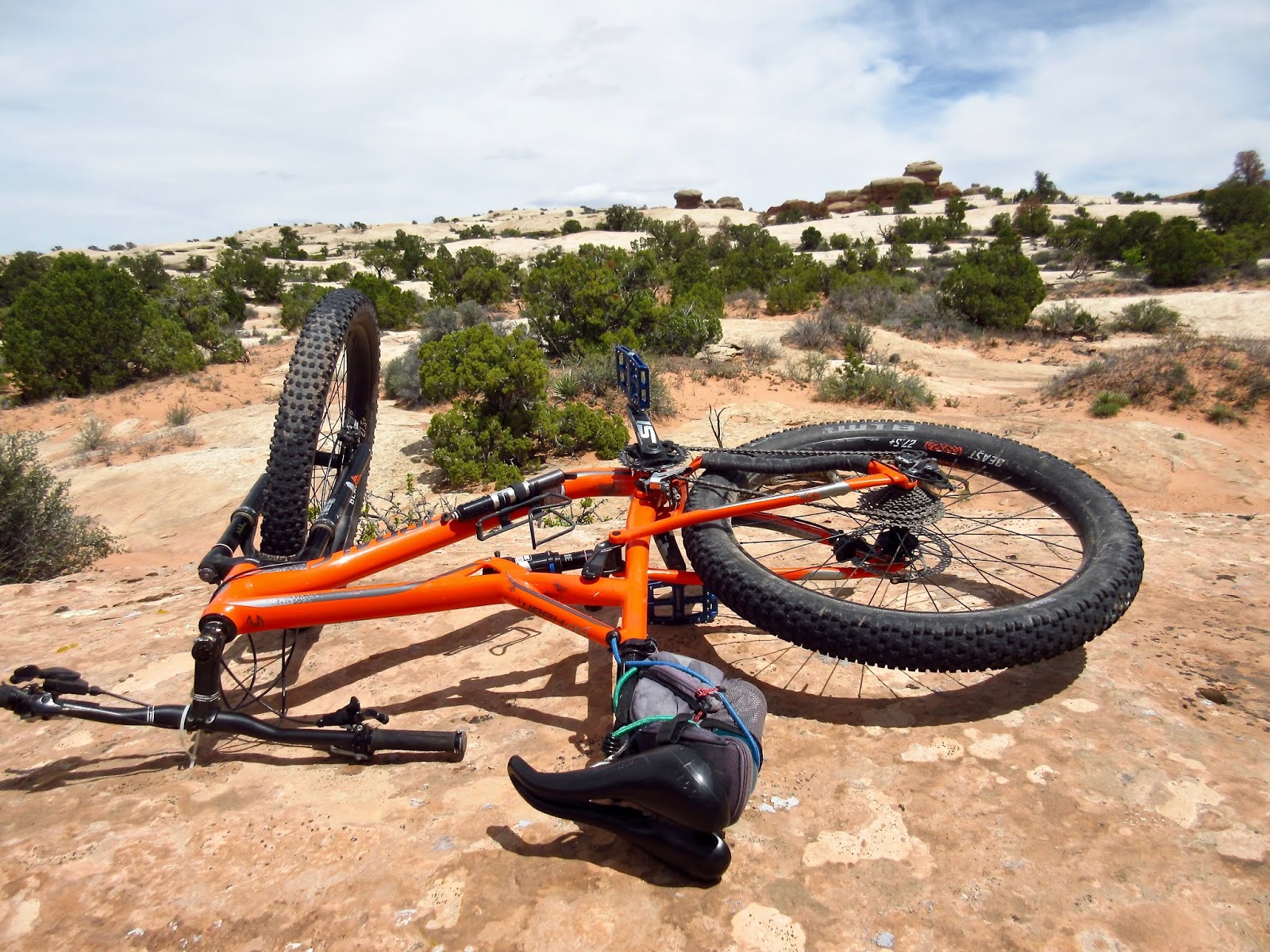 Mark Philosophizes: In hindsight, one shouldn't measure success by accomplishments so much as obstacles overcome along the way. Well into our Third Act, our bodies are more and more aware of the ever increasing differential between "accomplishments" and being "accomplished."

Next time we will tack on our Back Door Route through Little Ass Valley to the Beyond Tower Arch hike via The Crack and make a long day of it, trekking through landscapes we've come to believe rivals, if not surpasses, anything the "core" area of Arches National Park offers. And does so with 99.9 % fewer people.

Peace out!
Keep moving,
Mark and Bobbie
Posted by Box Canyon Blog.com at 11:30 AM