Beyond Tower Arch Part II: Where Outdoor Life Sometimes Slips Through The Cracks... 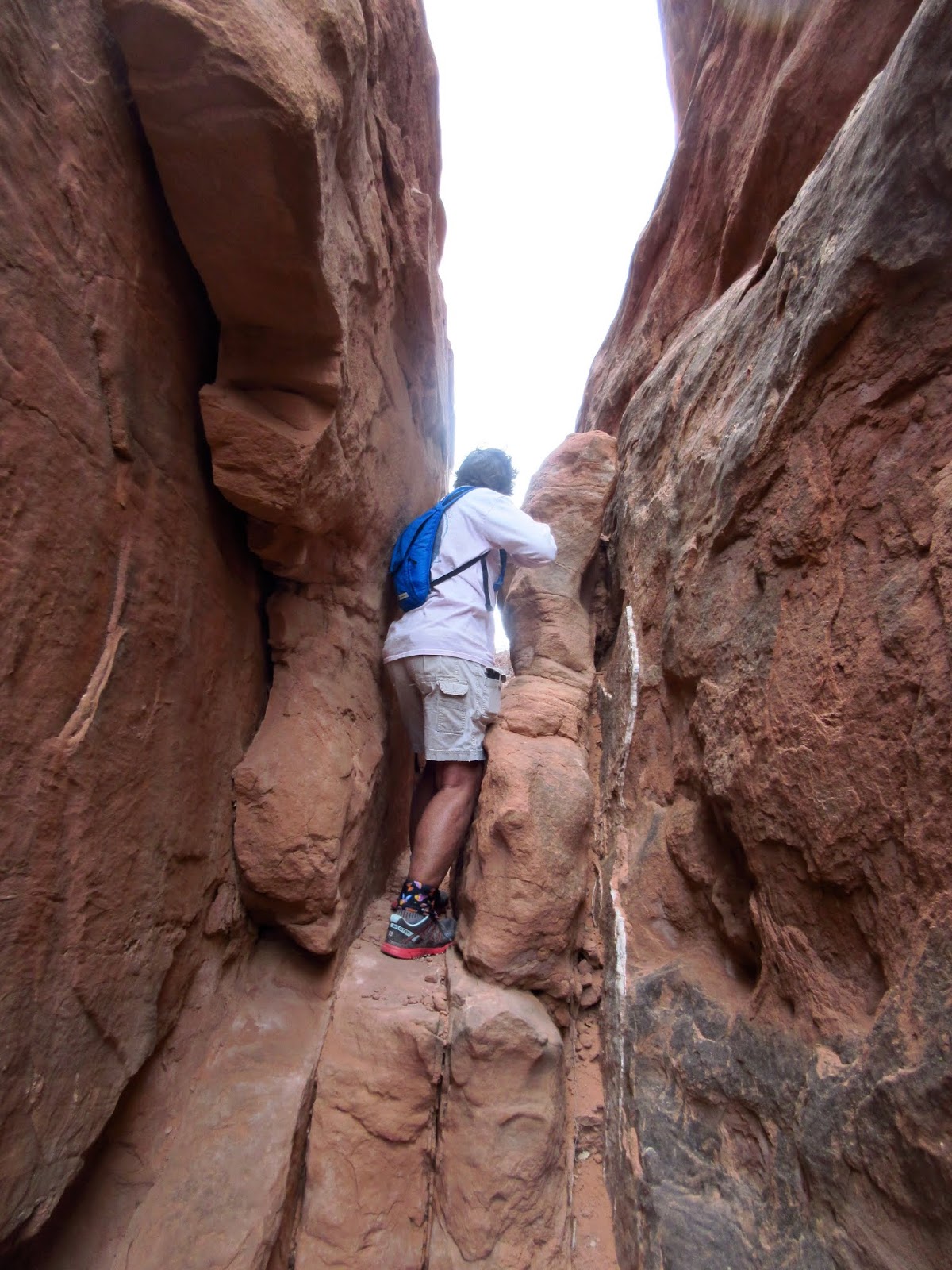 What a glorious day of route-finding the gaps between colossal sandstone Fins, being humbled by the measure of Marching Men, and slip-navigating a tapering 16 inch crack so constricted I couldn't  draw a full breath. And best of all? We're still headed away from camp in search of the ultimate loop.

When last we spoke, Bobbie is hanging by fingertips...literally. 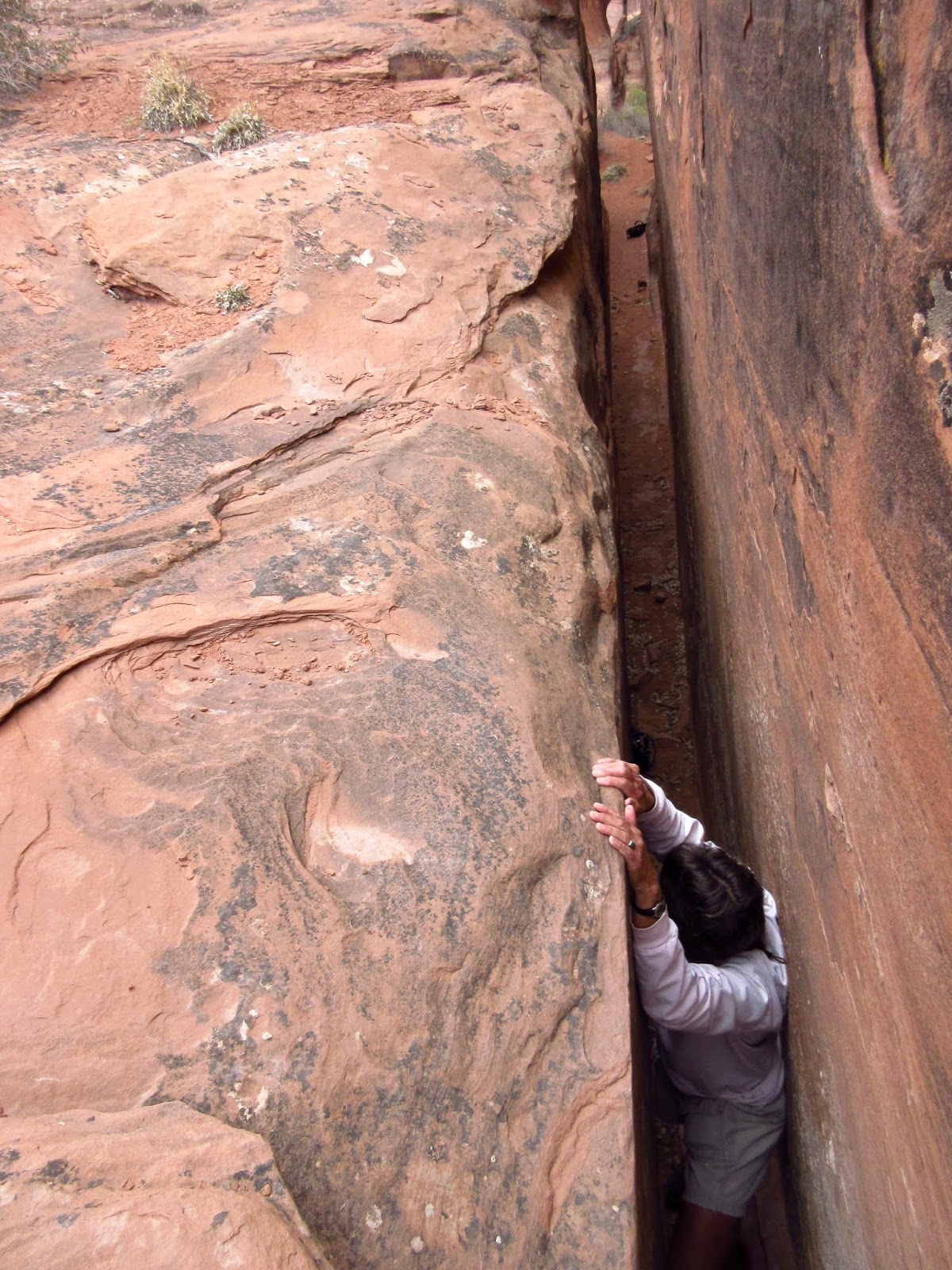 Needless to say she slips the crack, but it takes a little hoisting assistance from your's truly. The whole ordeal becomes more difficult when the hoistee comes down with a severe case of contagious giggles that adds several degrees of difficulty. It's not pretty, as the ornery Russian judge scores it 5.4 out of 10. It's a small price to pay for success :) 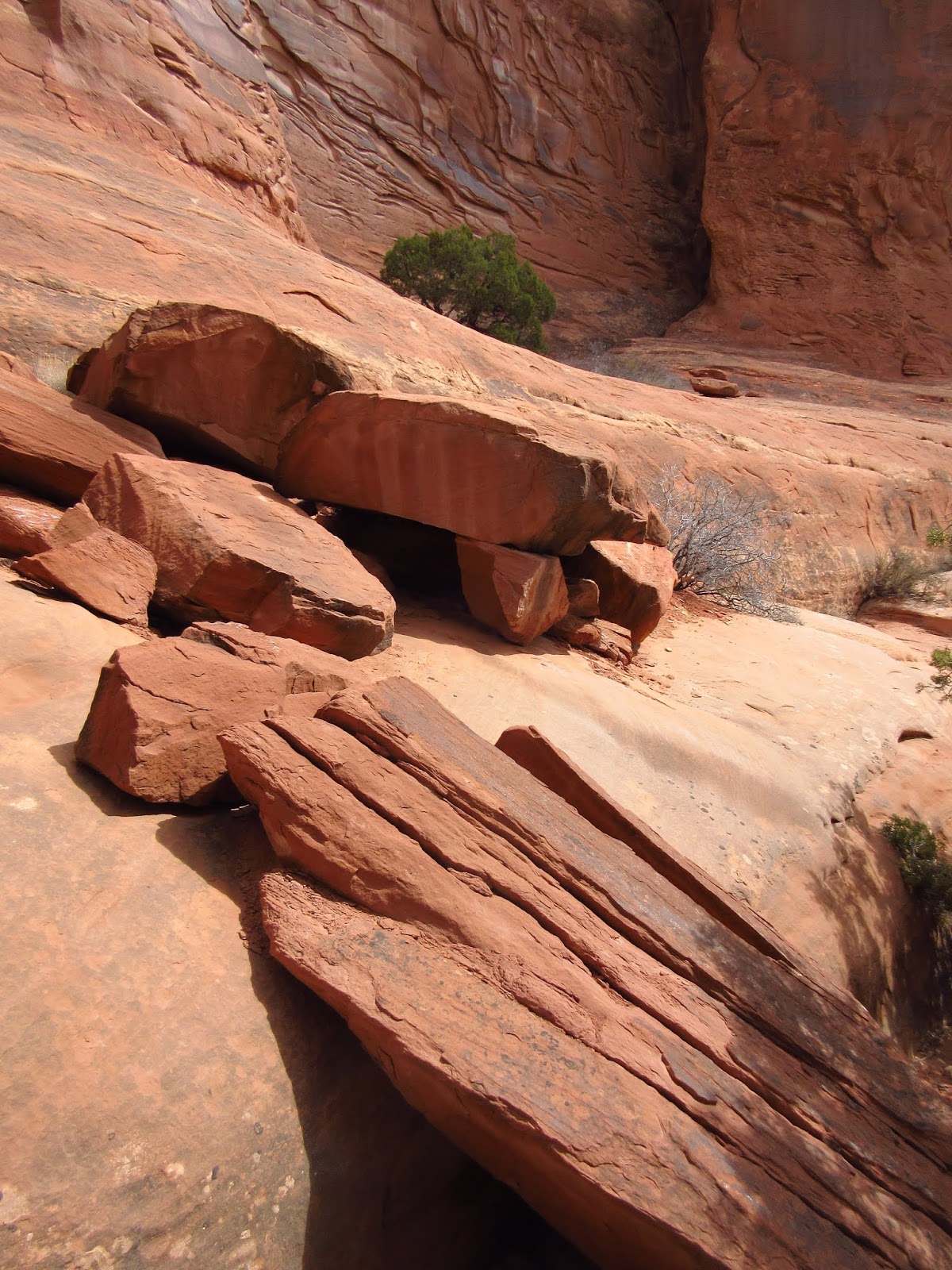 Our route beyond Tower Arch is littered with humungous boulders that, at one time or another, tumbled from above. Maybe we should be wearing our helmets! I say. Like it would make a difference, replies Bobbie. She has a point.

Beyond The Crack, we are presented with broad sandstone catwalks. It makes for easy walking and a lot of oohs and aahs and finger pointing. Look at that! 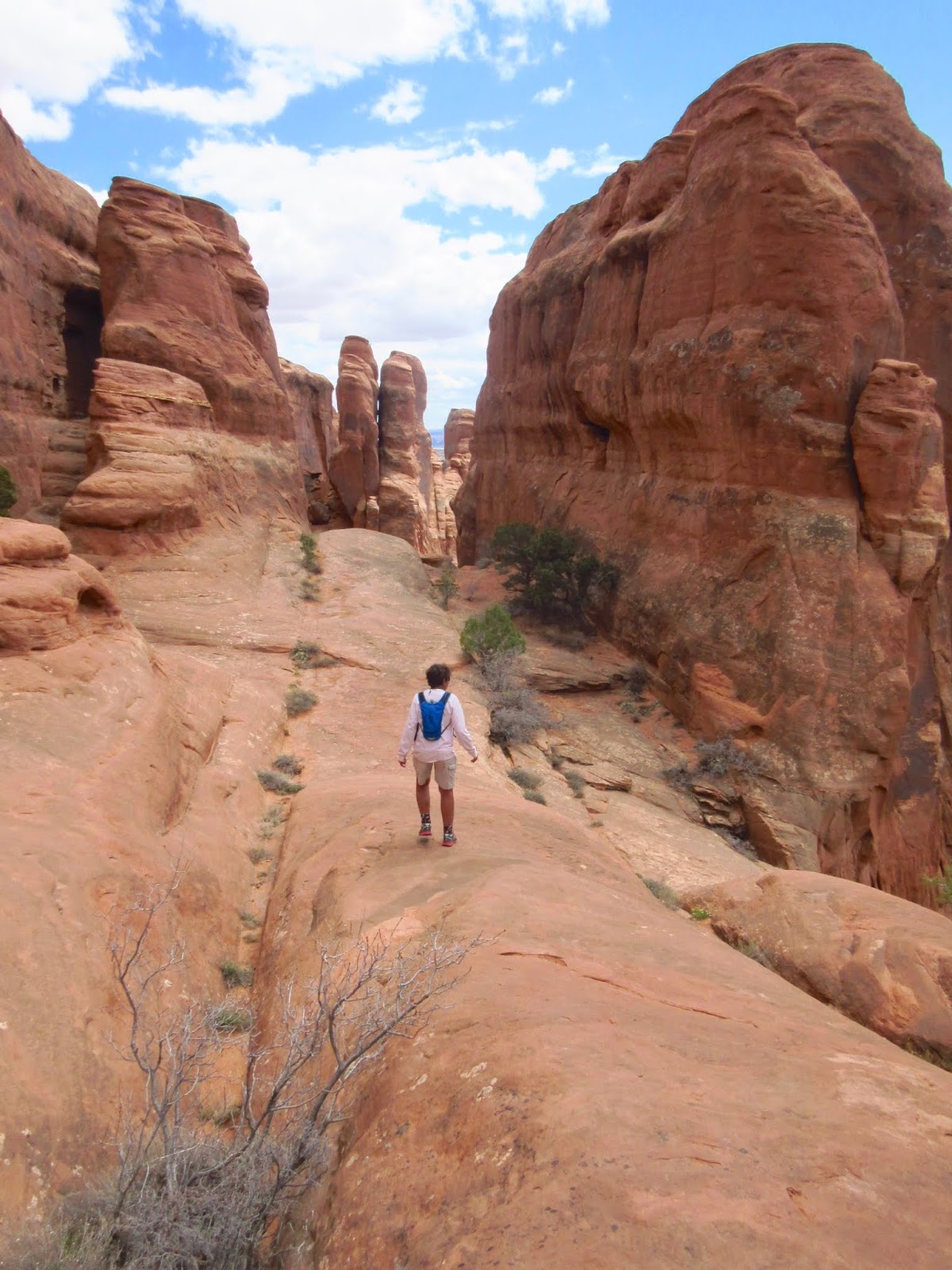 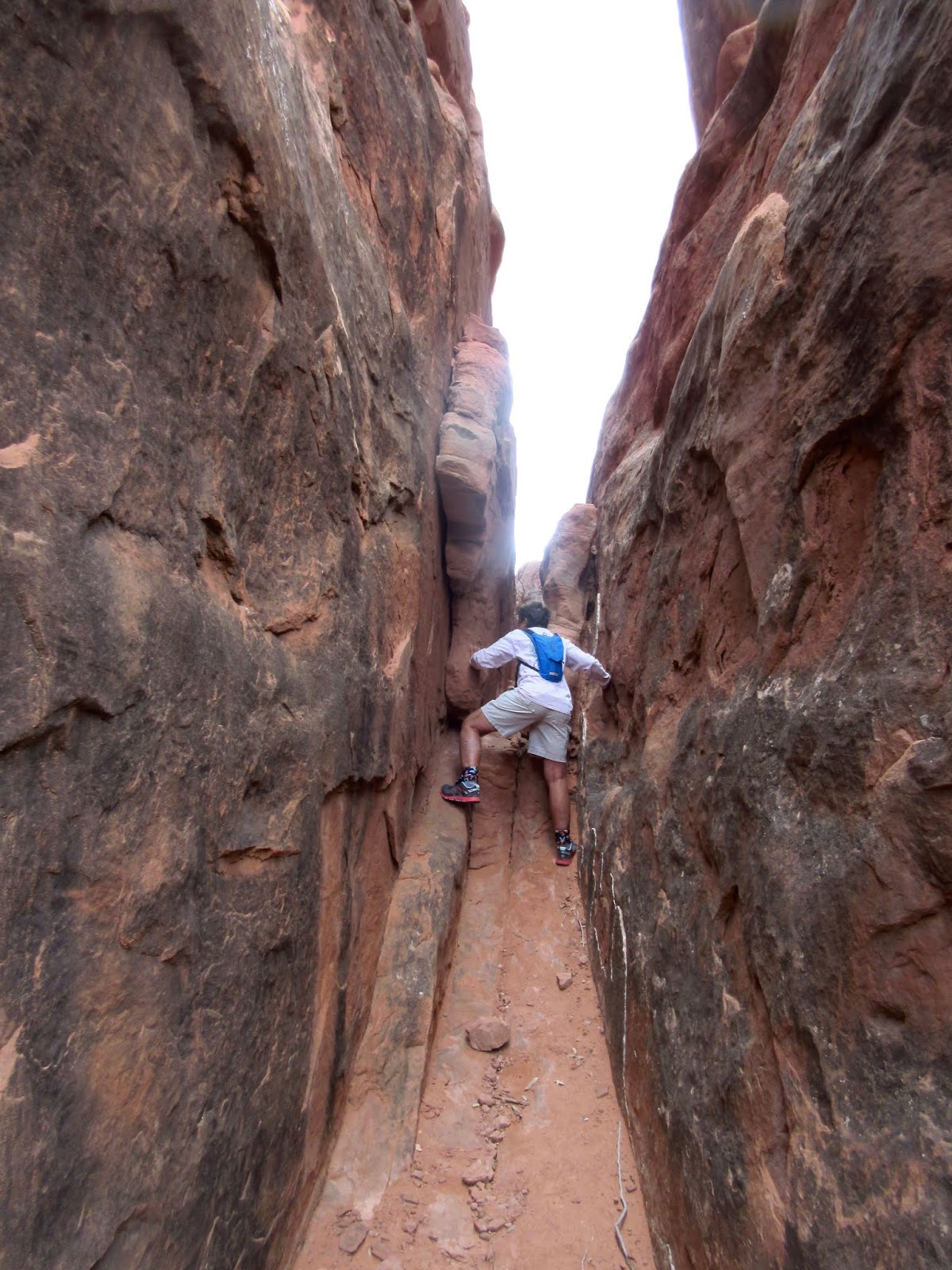 There were more "cracks" to slip, followed by some loose-dirt scrambles. 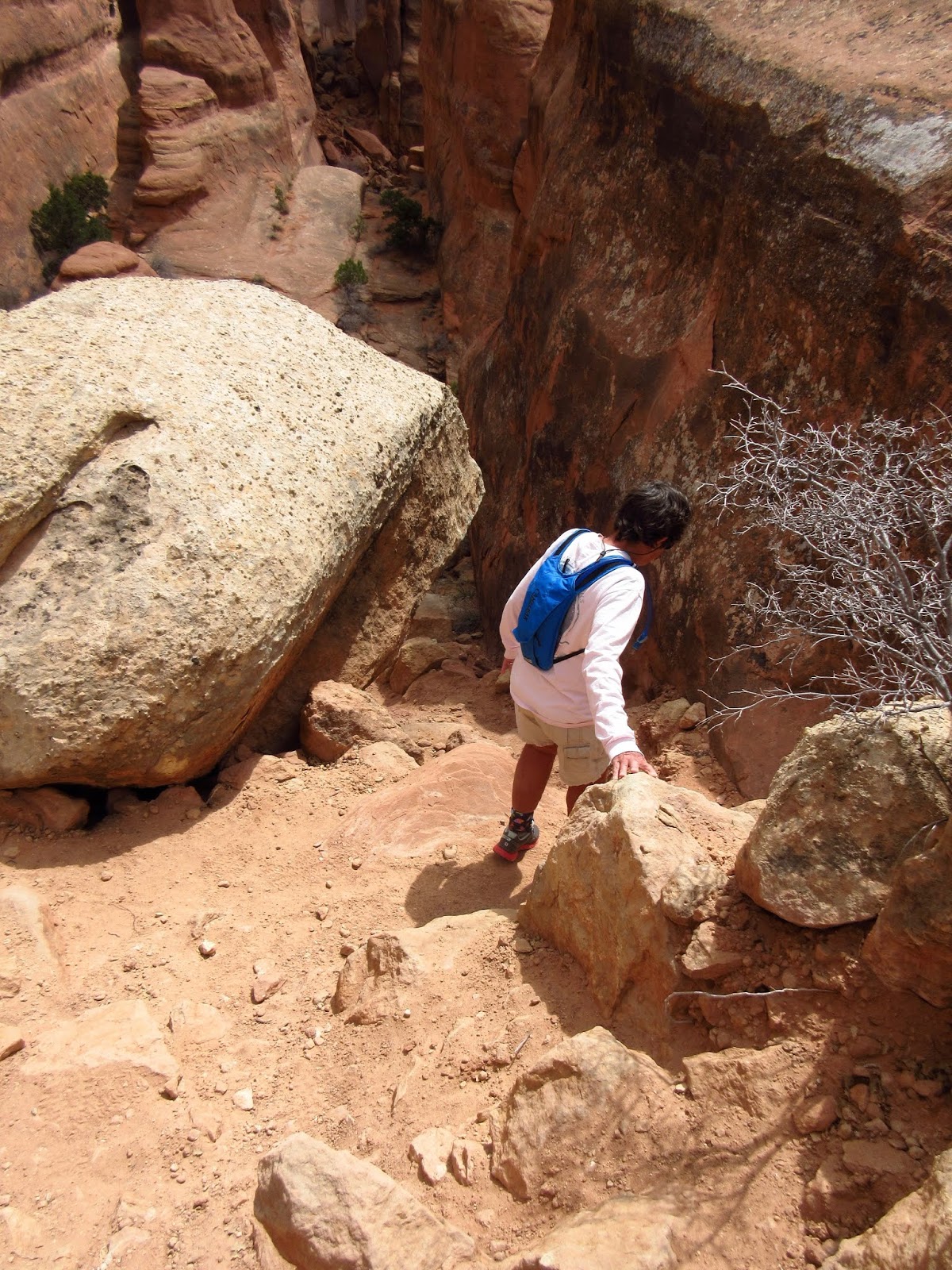 Our hopes are buoyed when we finally exit the corridor of fins and bottle-heads. This route sure makes a cool extension to our Tower Arch hike, especially if we can make it into a loop, I say to Bobbie. Yeah, if we can find a way out, she replies with considerable doubt as she surveys the landscape. She knows my secret ultimate goal/fantasy is to turn every hike into a loop, or at least a lollipop...followed by, well, let's just say it has something to do with the Victoria's Secret models :) 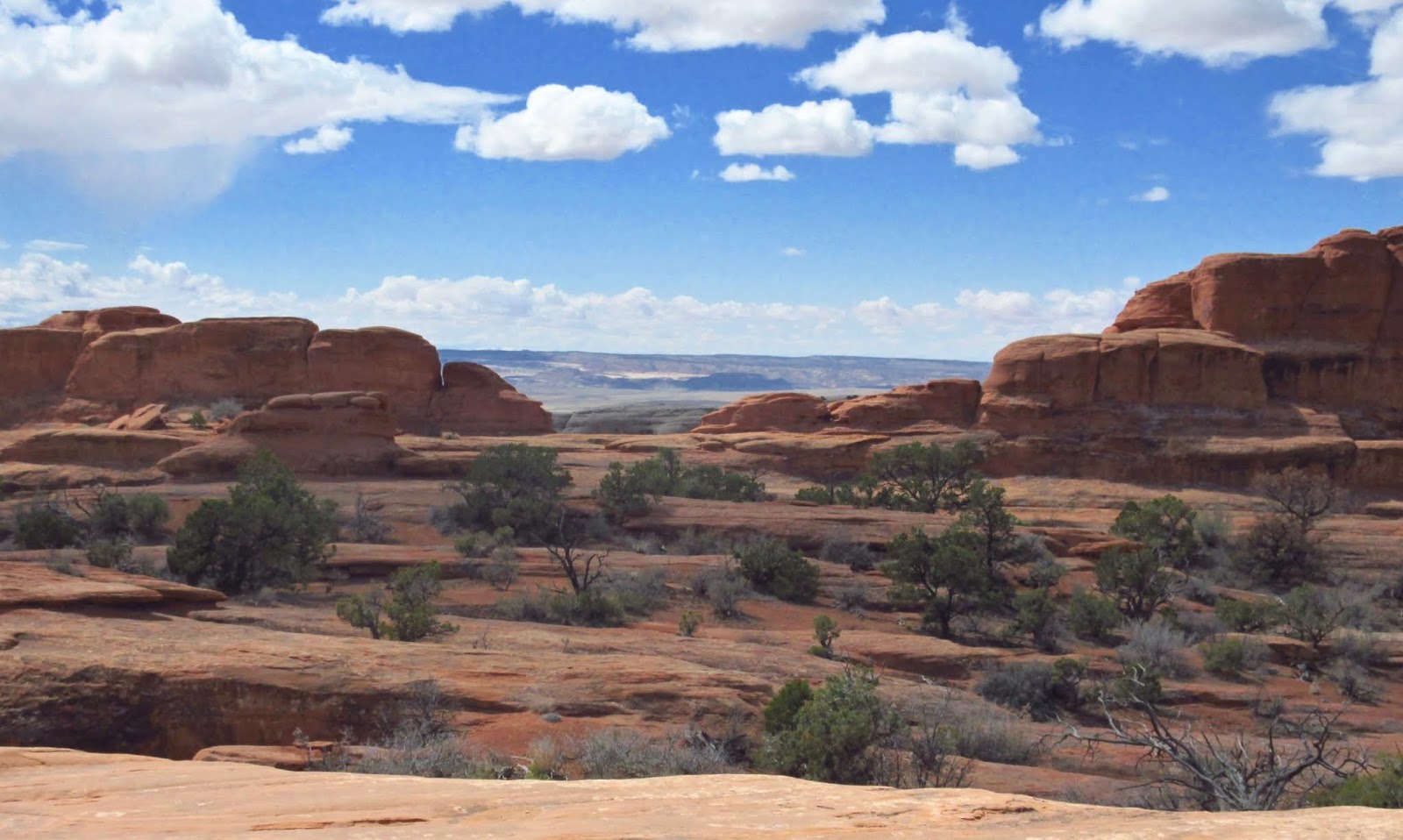 But the landscape is not cooperating. We are trapped on a catwalk that's hemmed on either side by steep and deepening cracks.


You know those hikes—when the landscape you are exploring is so compelling, so magnetic, so...so...romantic—that you get sucked into its vortex, its black hole, so to speak. And the aching lust to see what's around the next bend. Yeah, this is one of those times.

But there comes a point in time...especially when you are still going away from camp and it's hot and late and you're legs are complaining...that you must bite the bullet, wake up from your fantasy, and turn around.

But the illogical, dumb-male side of my brain wants to argue. I wonder, as I'm prone to do, about the odds of pulling off a loop, and how long it might take. One misstep or wrong turn can in this kind of country can turn a sweet dream into a nightmare. Where does the greater disappointment lie, to risk additional time and effort and make an attempt...only to be cliffed-out into another backtrack, or call it good enough and turn around now and live to hike another day?

We've already had enough glory for one day, a day that exceeded our wildest-dream. What was it my Preacher Daddy used to say? Greed only leaves one lusting for more...or something like that.

It's so hard to turn around. We've already come down a couple of iffy places that might be more problematic going back up. To continue, is to add to them... 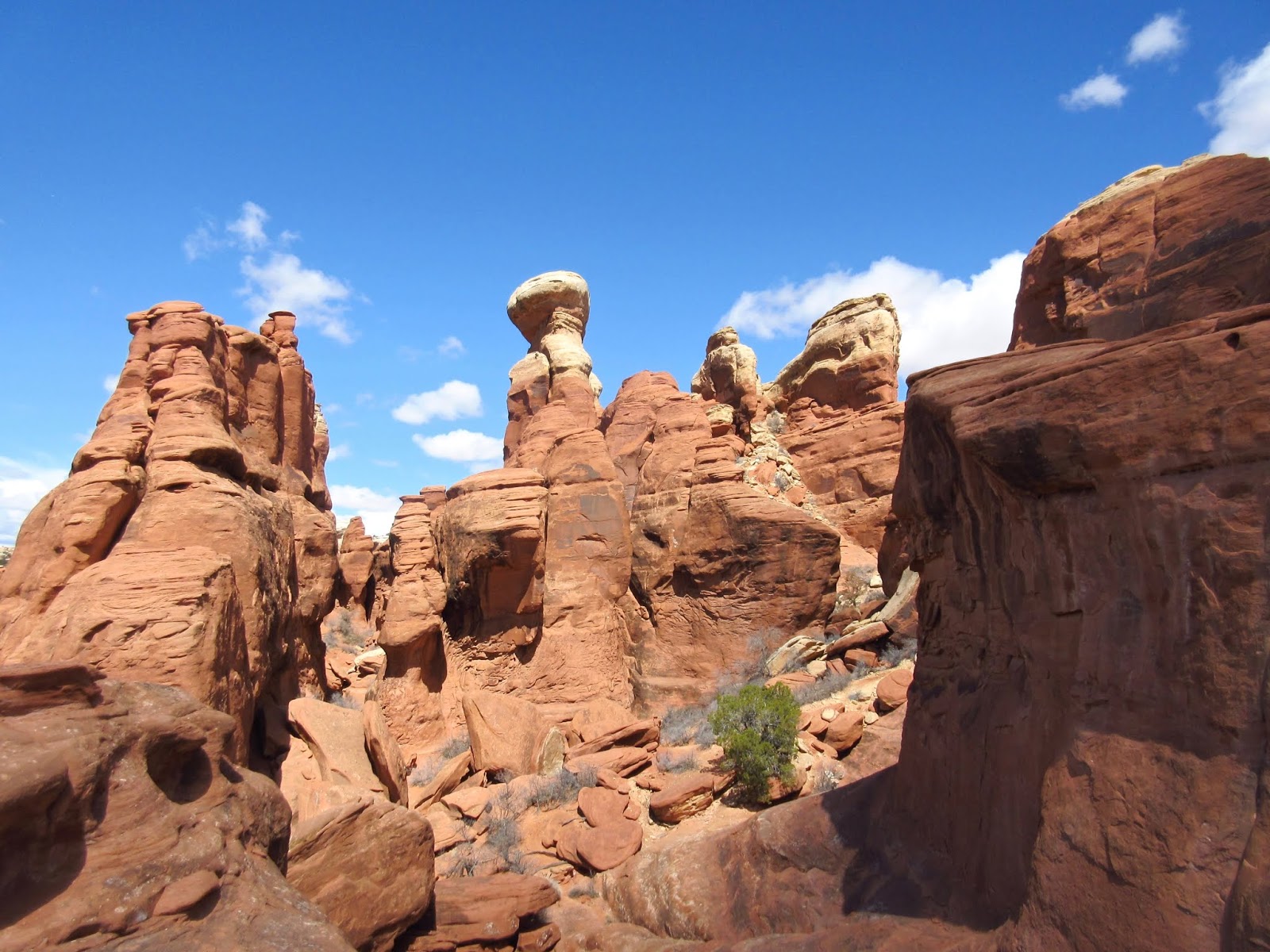 It's a slow retreat. Without a rope, one of the obstacles is at the limit of making it a "one-way" route. Sometimes it's easier to go down than up. This was one of those times. I got stuck halfway.

20-20 Hindsight: I should have removed my overburdened pack before attempting a near-vertical slab of sandstone with neither hand nor toe holds. About halfway, it began to feel like there was a rope tied to my pack, and was tugging on it. I can't go up; and I can't go down.

Arms and legs begin to tremble...part from exhaustion, part from fear. I splay out...trying to put every square inch of flesh and/or clothing against my sandpaper rock, hoping it provides enough surface friction to hold me in place while I rest and think. What I would give for one finger or toe hold right now...

Meantime, Bobbie goes to work searching out a different, easier way up. Suddenly, she's above me, squatting down with a leg and boot extended for me to grab onto. Thanks in large part to my heavy pack, I'm pulling her down the slope. She leans back and we try again. If only my feet had eyes I could go down.

Axiom: When you really, really need a finger hold, there's none to be found. I'm stuck on a fucking cueball!

It would be my own skin that saved my bacon. Between Bobbie's extended boot and the placing as much bare skin against the sandstone...knees, shins, elbows, quads...I gain enough purchase to overcome my war with gravity, one-half inch at a time. Now, as I write this post, every appendage on my body is covered with oozing scabs. I'm a running sore, leaving a trail of bloody towel and bed sheets. It's a reminder, but I doubt I'll remember it.

Now if we can just slip The Crack, we'll be on our way home.

In the meantime, here's a few photos of the going-out route, beyond The Crack... 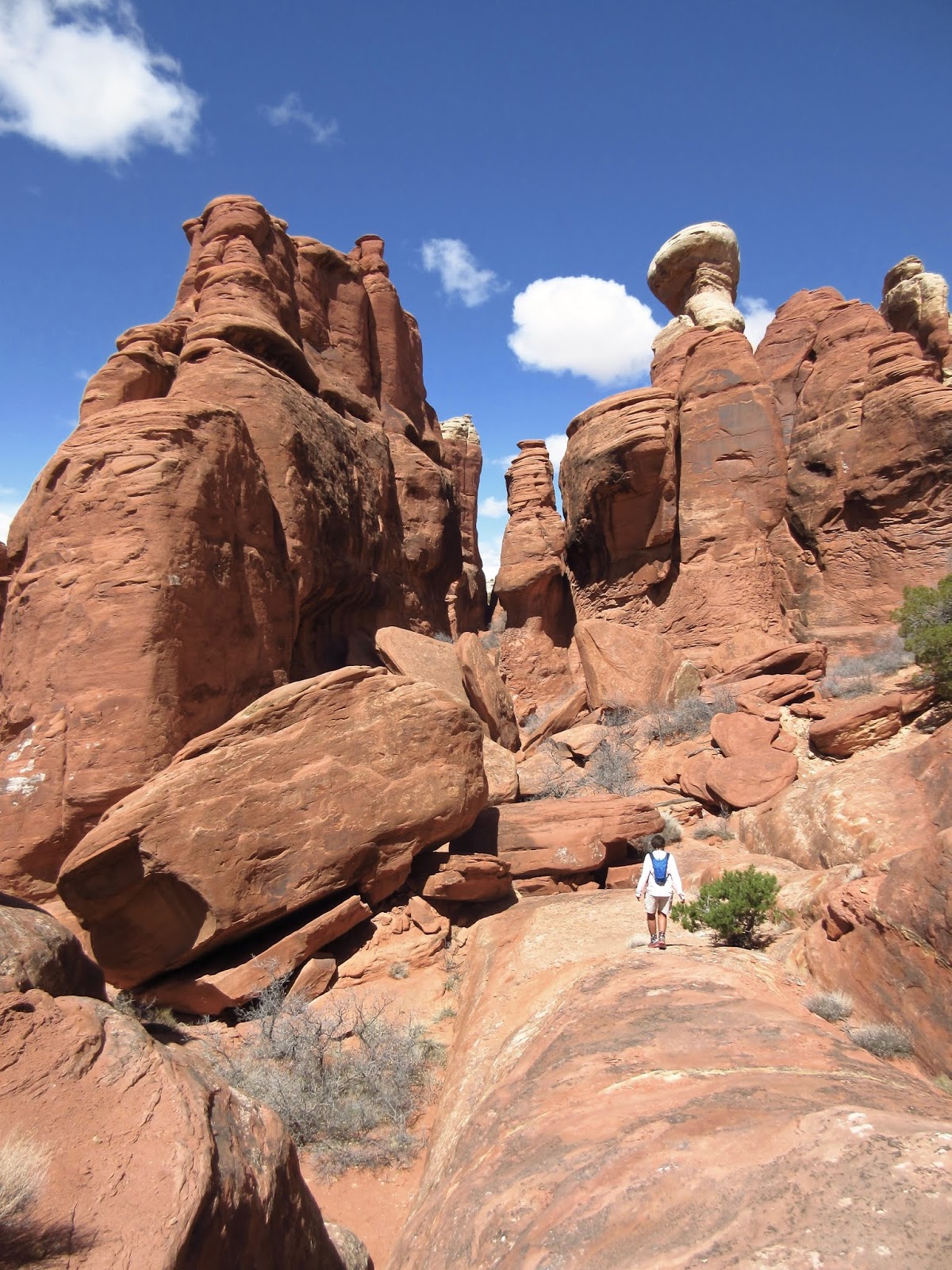 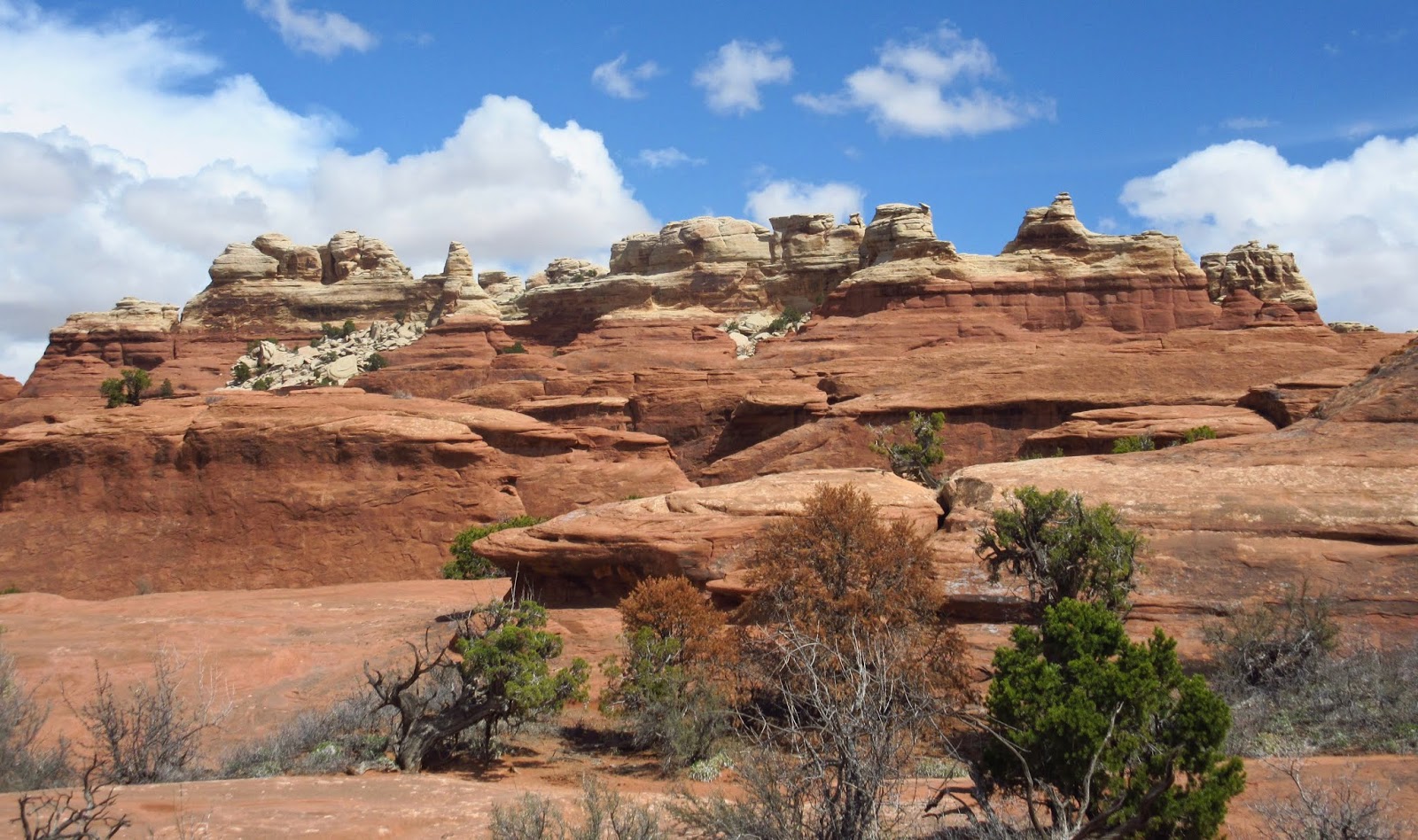 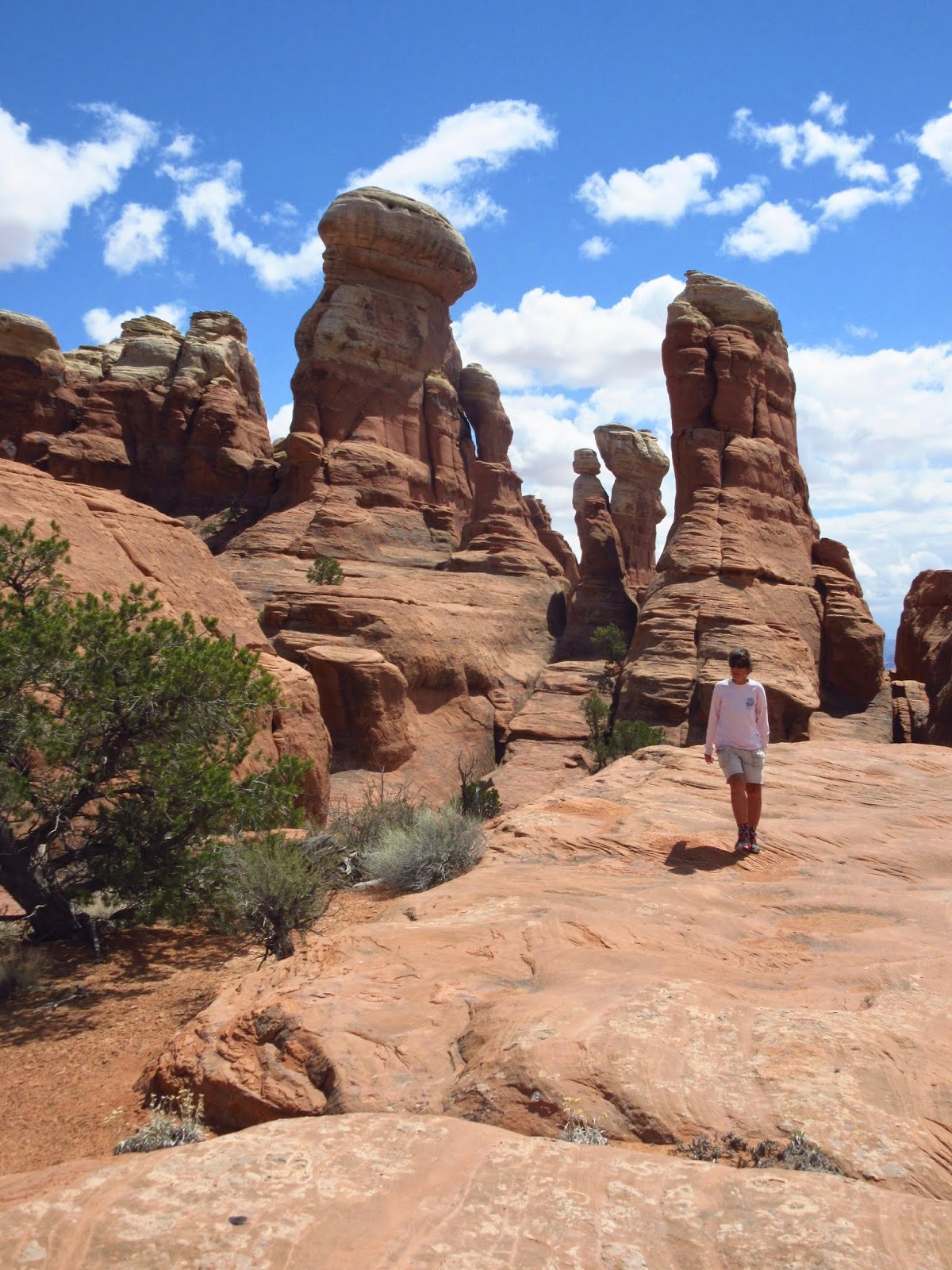 Which brings us back to The Crack, the final obstacle... 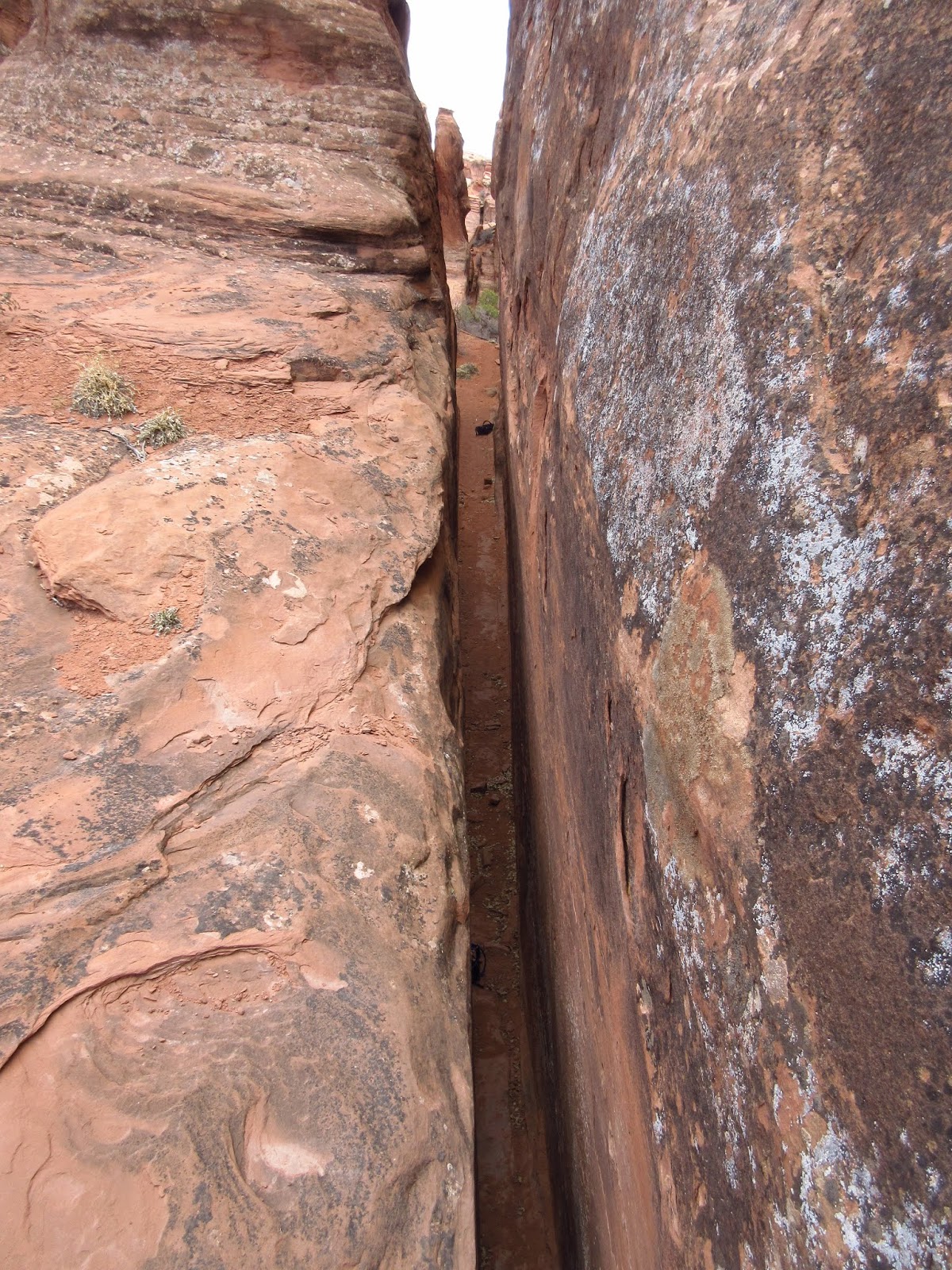 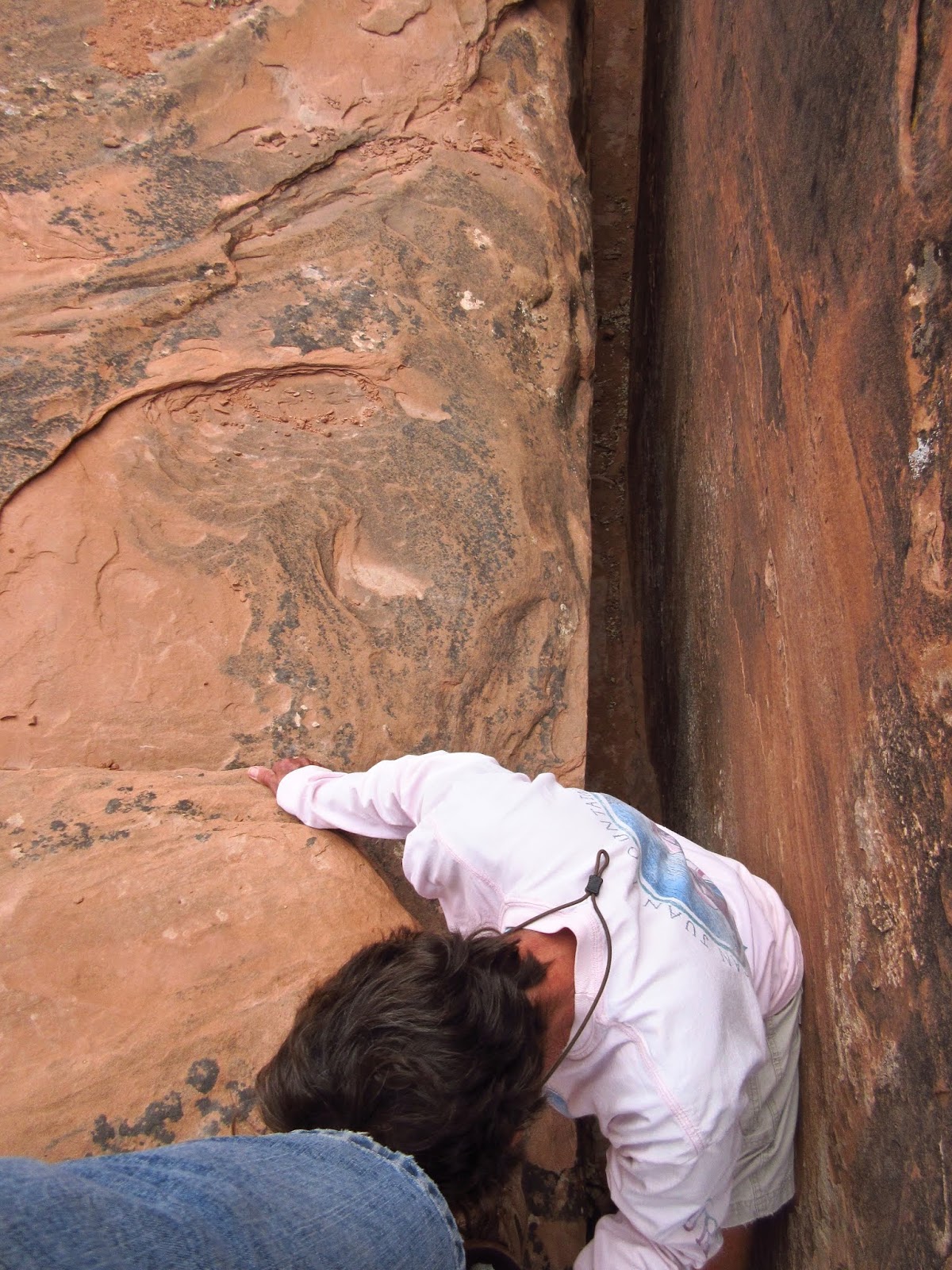 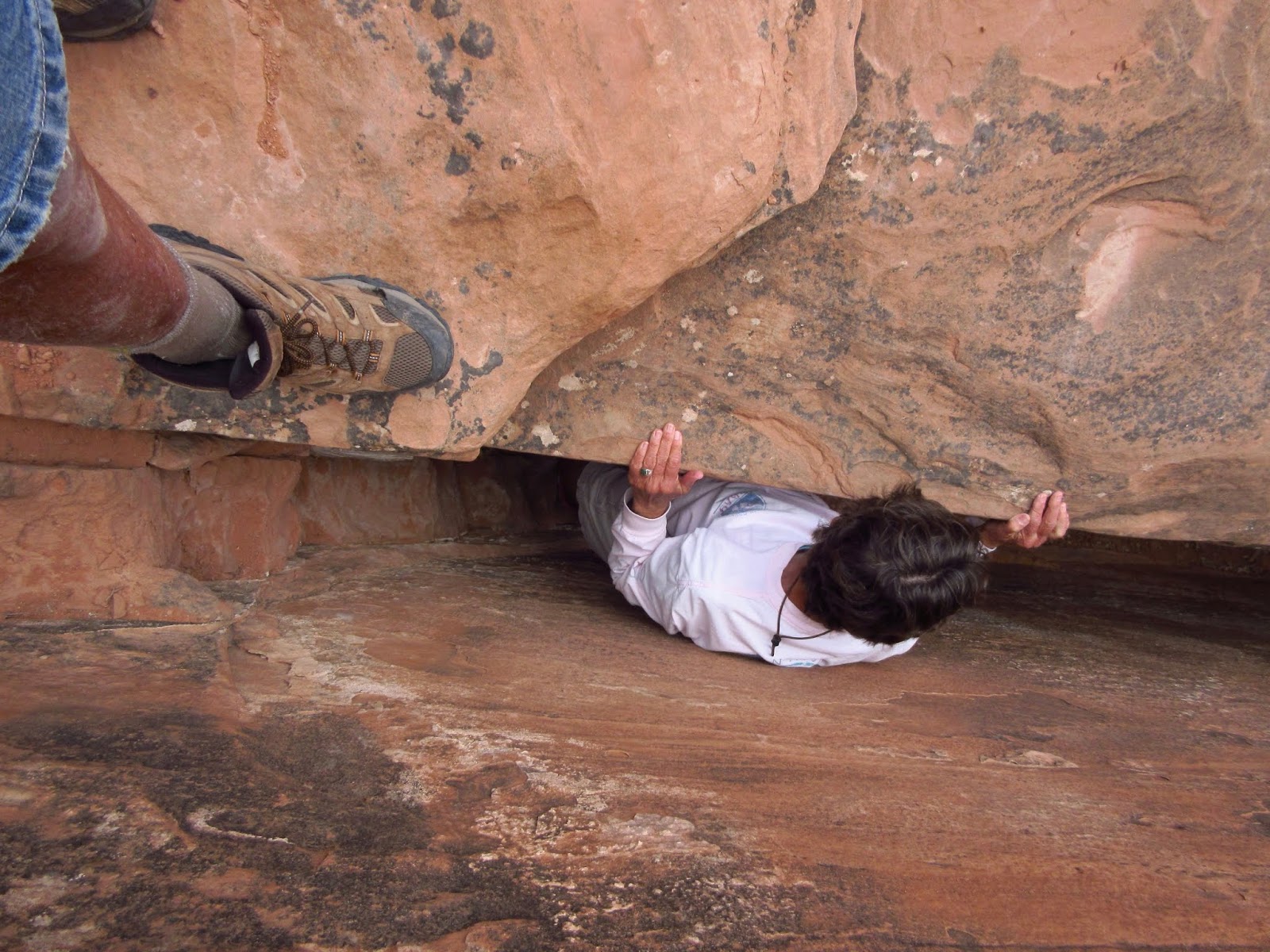 To go continue this story beyond our successful return through The Crack would be an exercise in redundancy. Suffice it to say we made it to The Ramp above Tower Arch, and "trusted our shoes" (there are no handholds) to ease us down. It was a five and a half hour journey that left me with more questions than answers.

You know, Bobbie, we need to try to find a way into that canyon that stopped us short...a north approach, I say as I pull out a map.

Check back for Part III, as we bike and hike in search of a north route to Tower Arch, and through the Canyon Abyss that stands in our way.
Posted by Box Canyon Blog.com at 8:40 AM